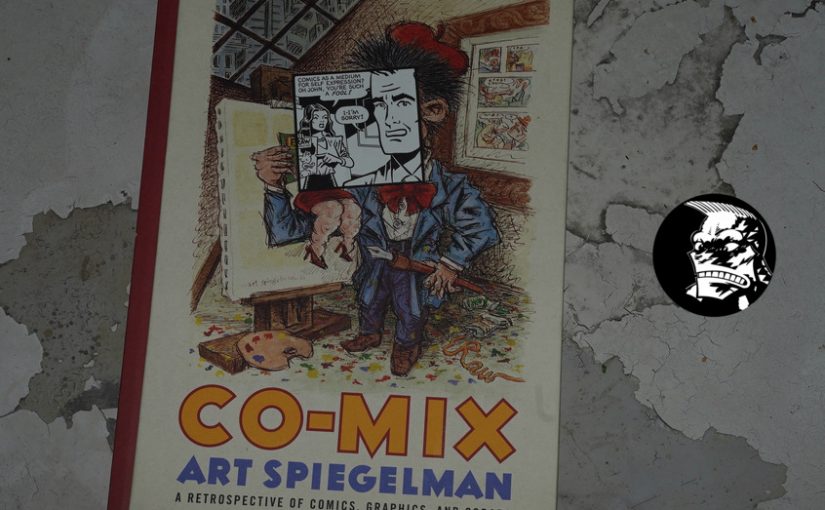 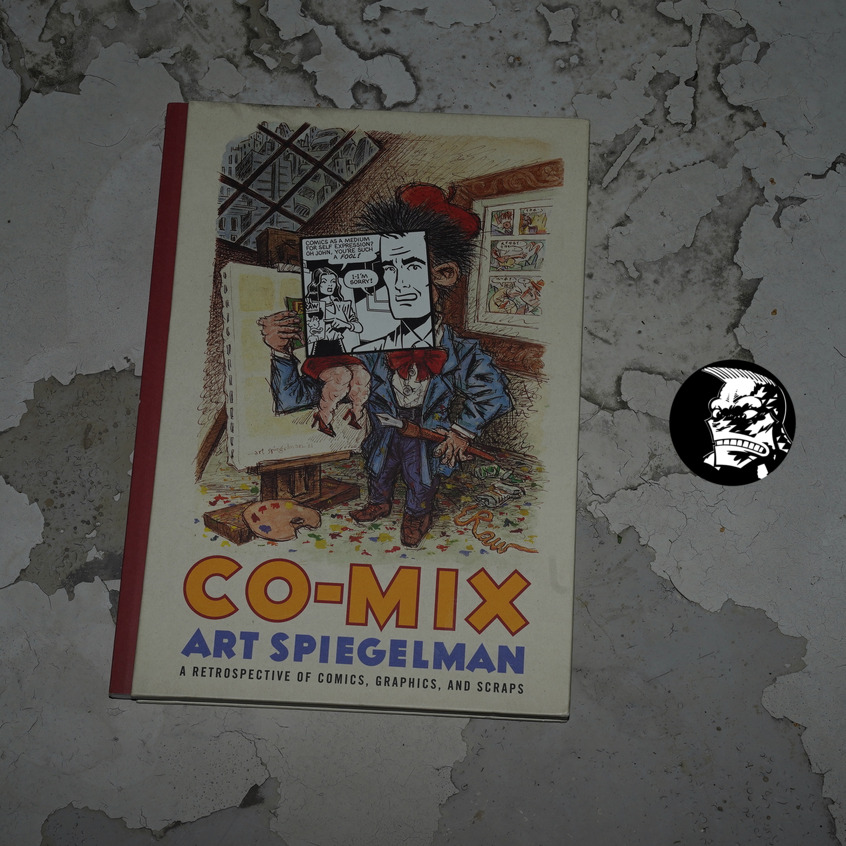 Co-Mix: A Retrospective of Comics, Graphics, and Scraps by Art Spiegelman (241x340mm)

In yesterday’s post in this blog series, I promised that it was the very, very final post… so of course here’s another post. Sorry! But it arrived in the mail, so I might as well read it and scribble some words about it. 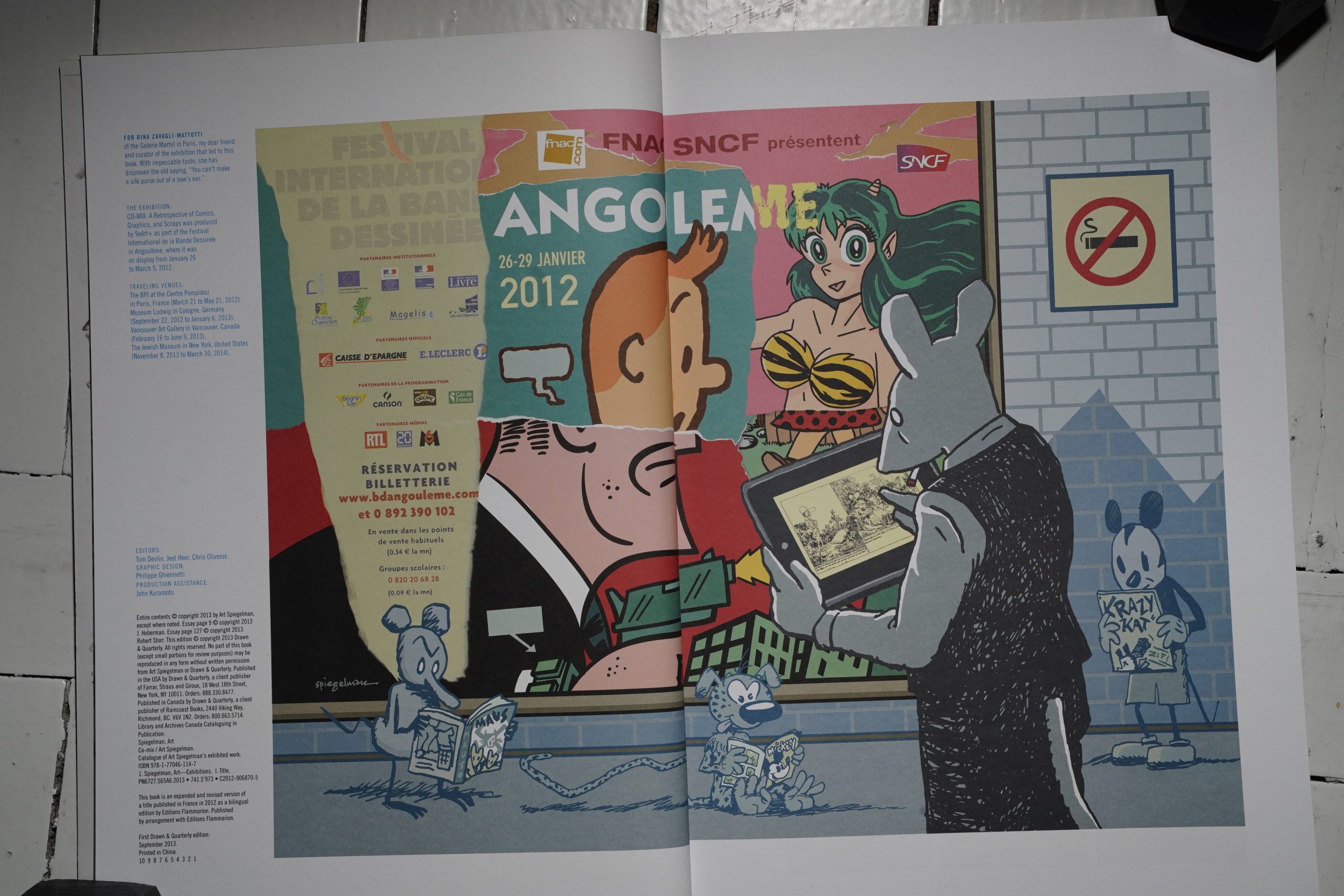 I bought this because I read a review of Art Spiegelman: Comix, Essays, Graphics and Scraps that said that this book was basically the same? At least they thought so? Which made me paradoxically more curious, because that book was published in 99, and was a very well-done book. So this might be … more, and newer?

And that older book was designed by the Raw crew, and was both very handsome and readable.

This book is not designed by them, but by Philippe Ghielmetti, and edited by the Drawn & Quarterly gang. 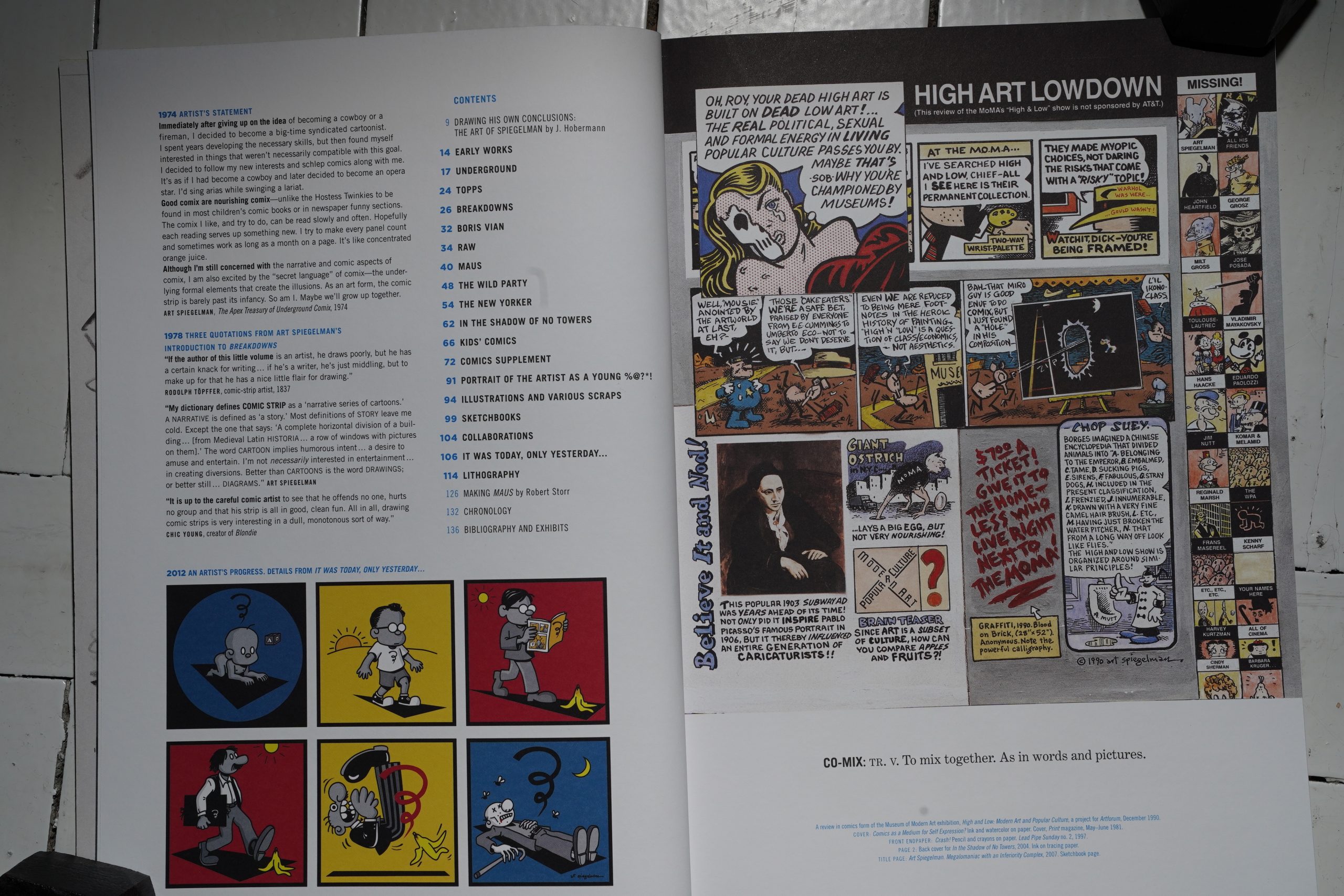 And it’s… It’s a much more thorough book than the 99 book. Much longer, heavier and… it just kinda doesn’t read that well? The design is also totally indifferent — there’s nothing particularly bad about it, but it seems like the kind of thing that would come out of a press if you just set the design programme to “auto” and dumped text and images into it. 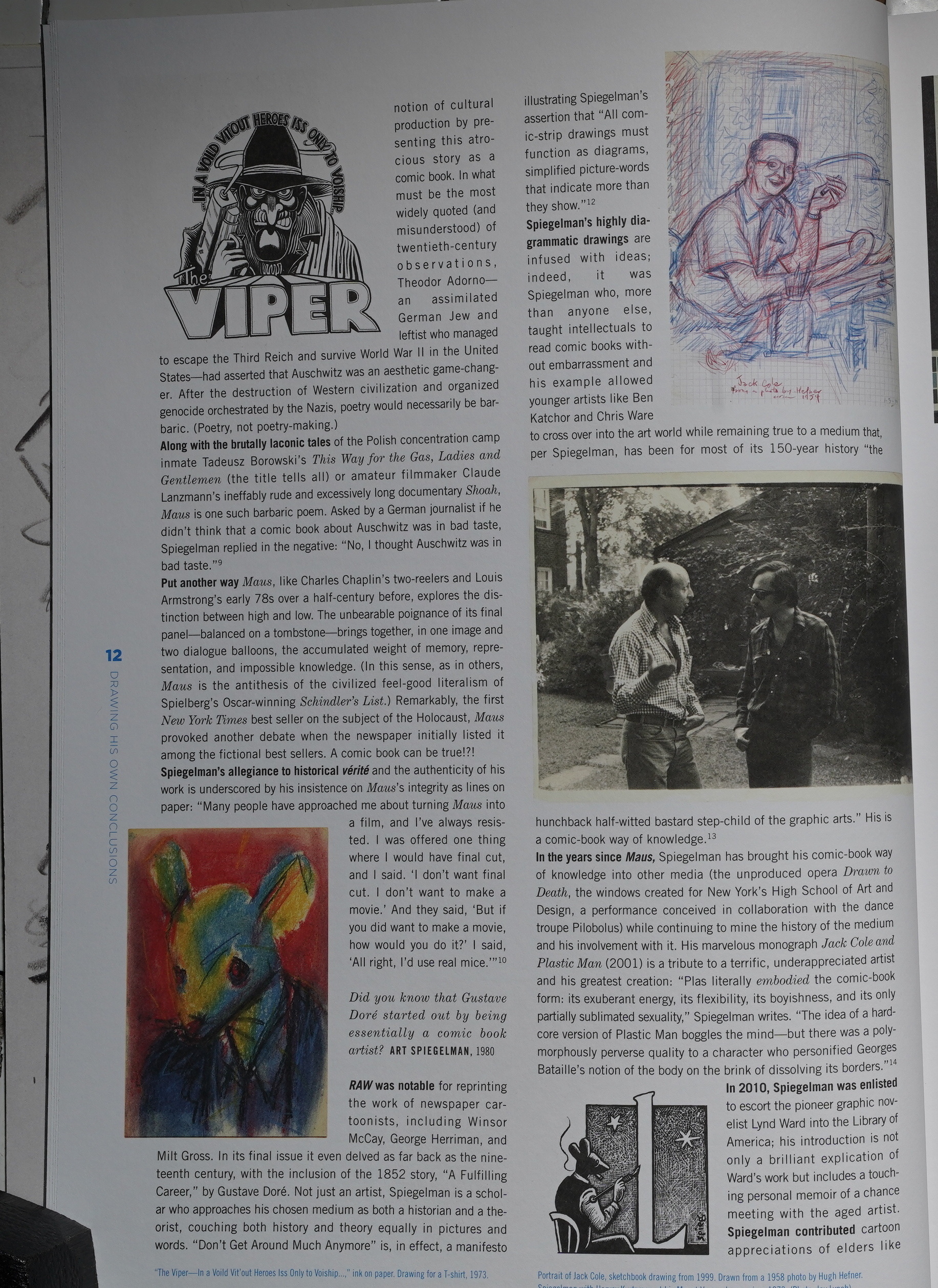 There’s a lengthy introduction by J. Hoberman, which basically tells us beforehand what the rest of the book is going to tell us. 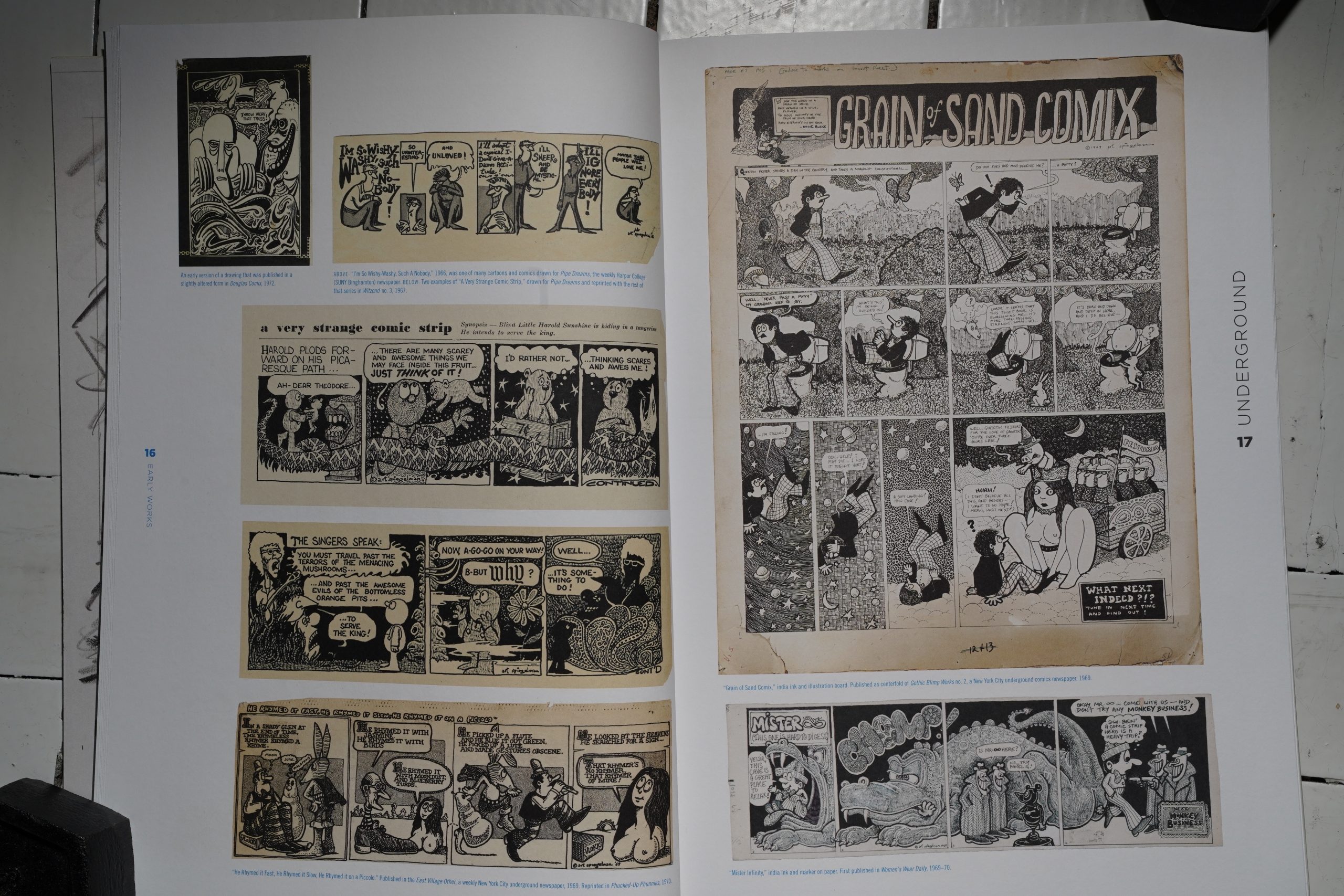 The 99 book had very few things from Spiegelman’s earliest days, so it’s fun to get some reprints of a bunch of random underground things. It doesn’t work as a reading experience, though — you can look at these pages, but they seem to discourage reading. And, yes, this is a sort-of catalogue for an art show — the year before this book was published, but then the show went on the road for a couple of years. So this approach makes sense, but… 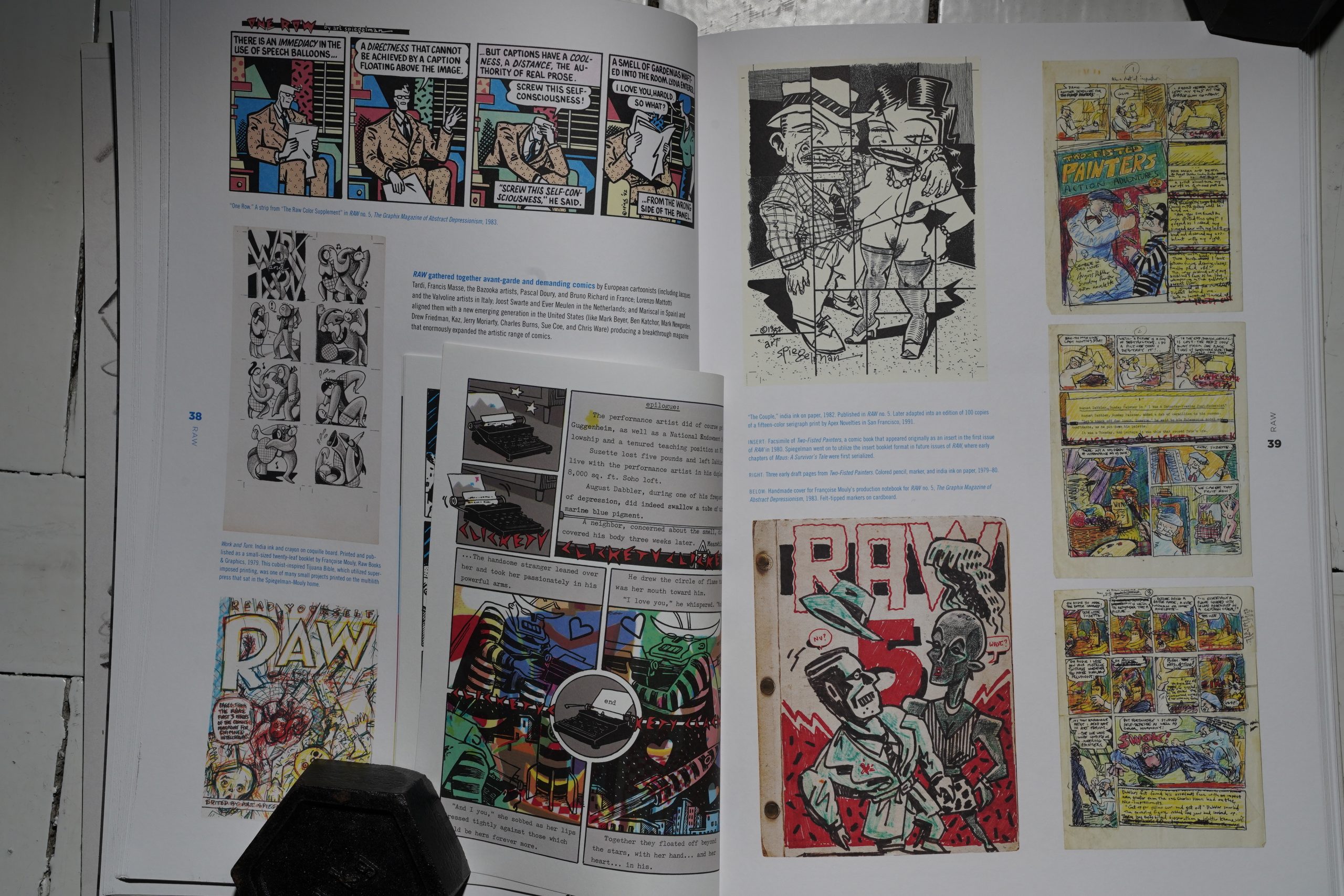 Even binding the Two-Fisted Painters booklet into the book doesn’t make it less staid.

I also find it pretty odd what they’re emphasising in this book. There’s about as many pages about The Wild Party, that execrable poem with Spiegelman illustrations, as there is for the entirety of Raw. 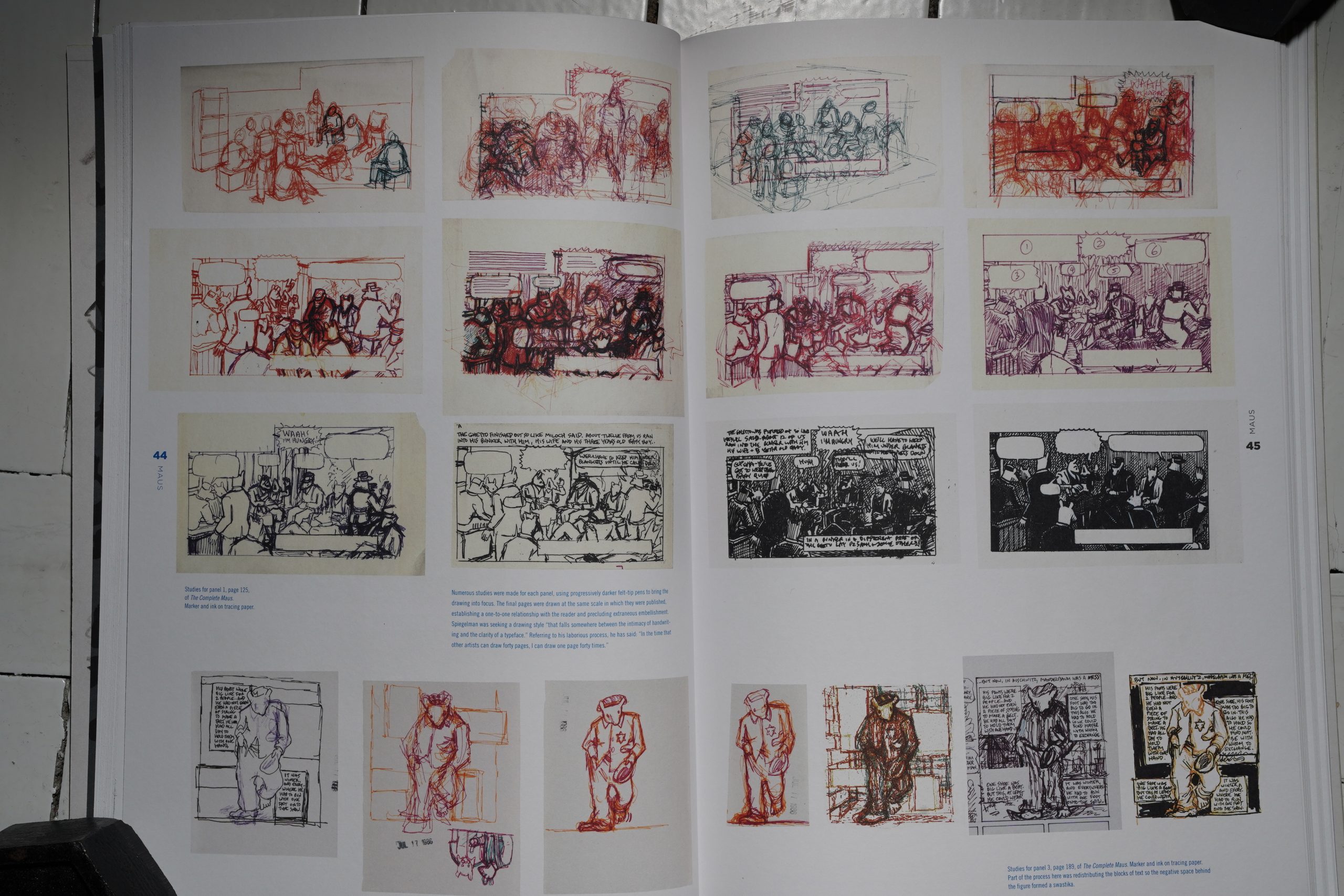 There’s more pages about Maus, but not a lot there, either. Which is perhaps more understandable, because MetaMaus covered Maus in exhausting depth. 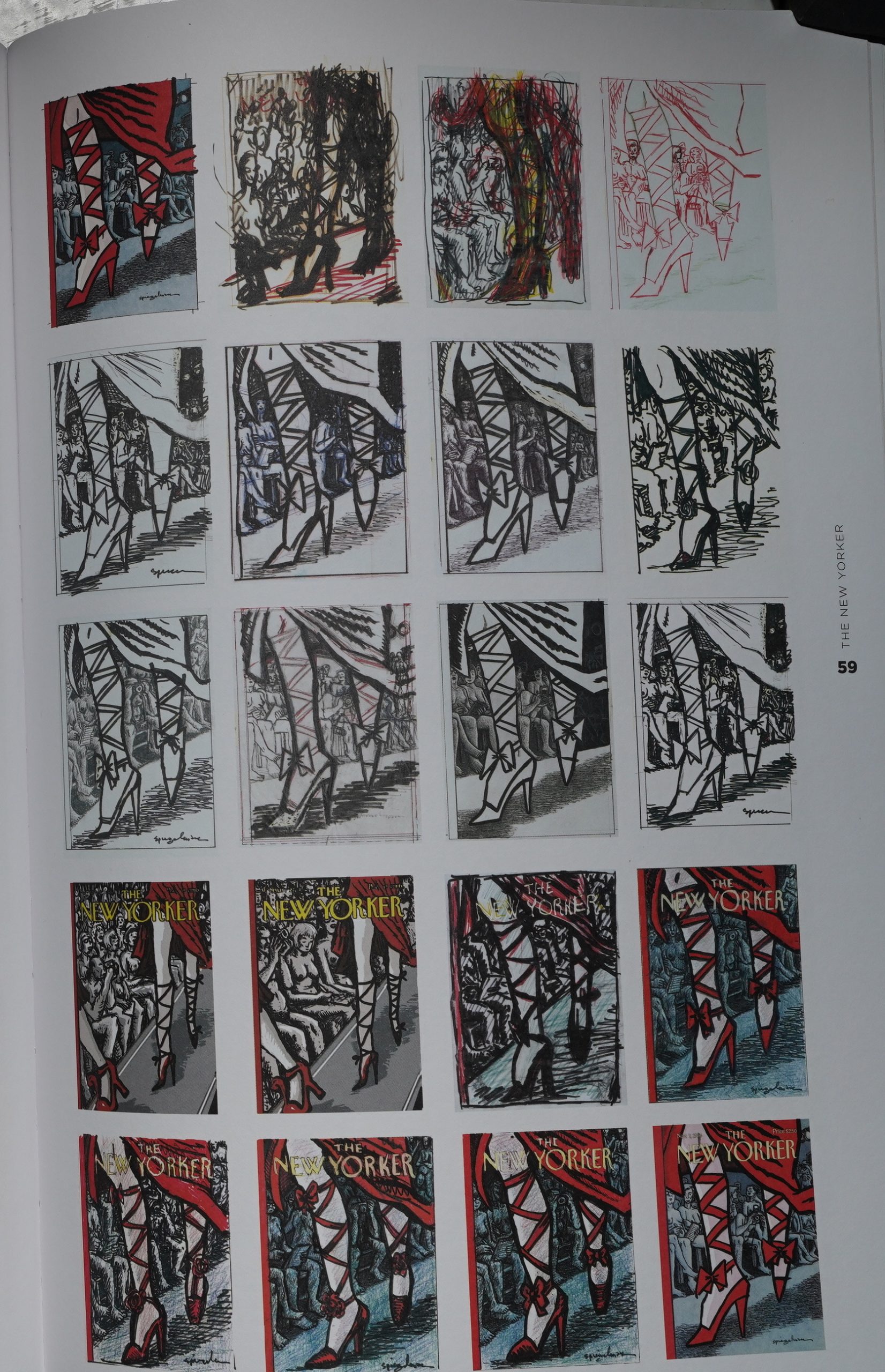 I don’t mean to be so down on this book, because there’s a lot to look at here that’s interesting. 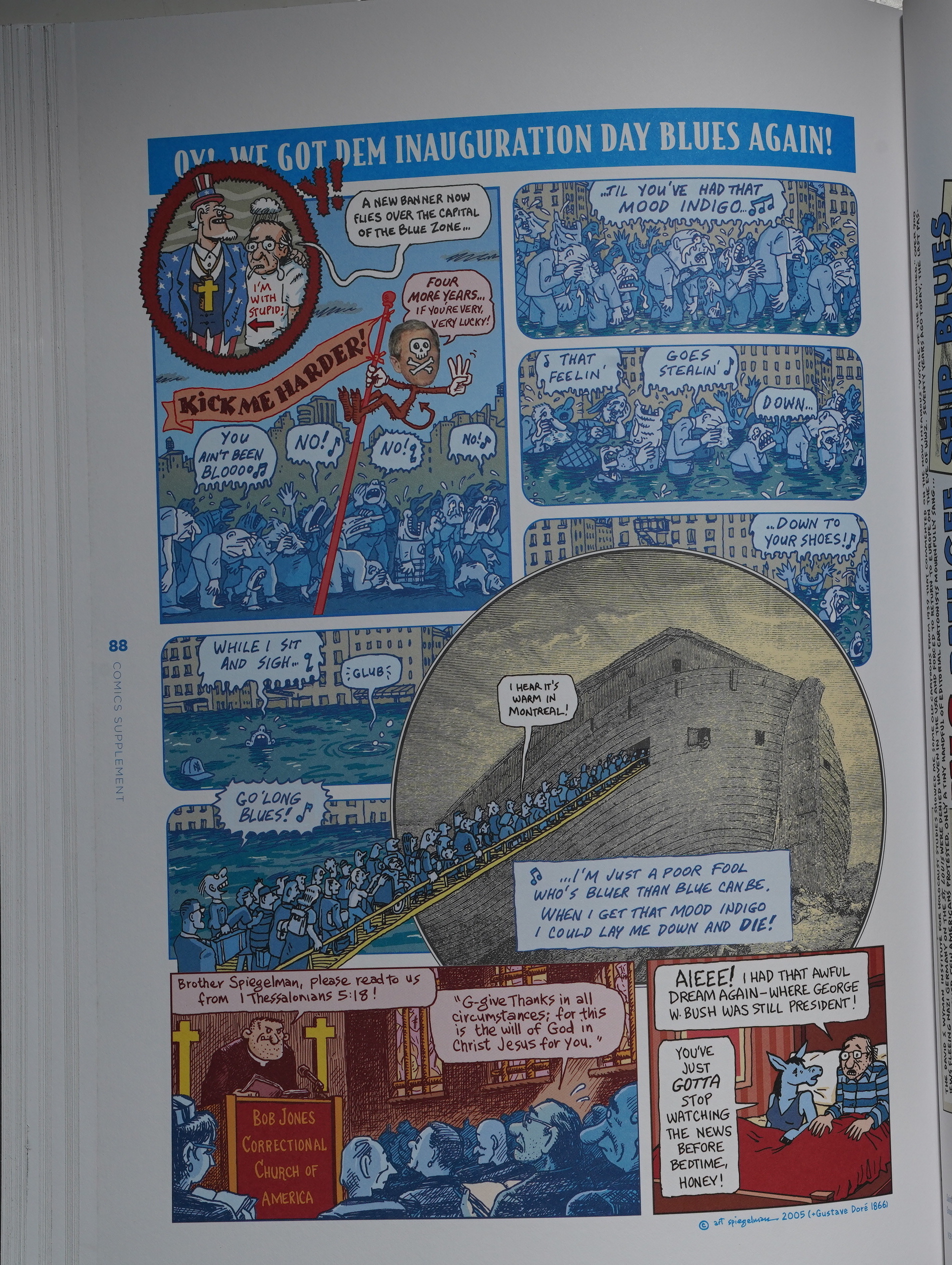 And there’s newer strips that I haven’t read before. 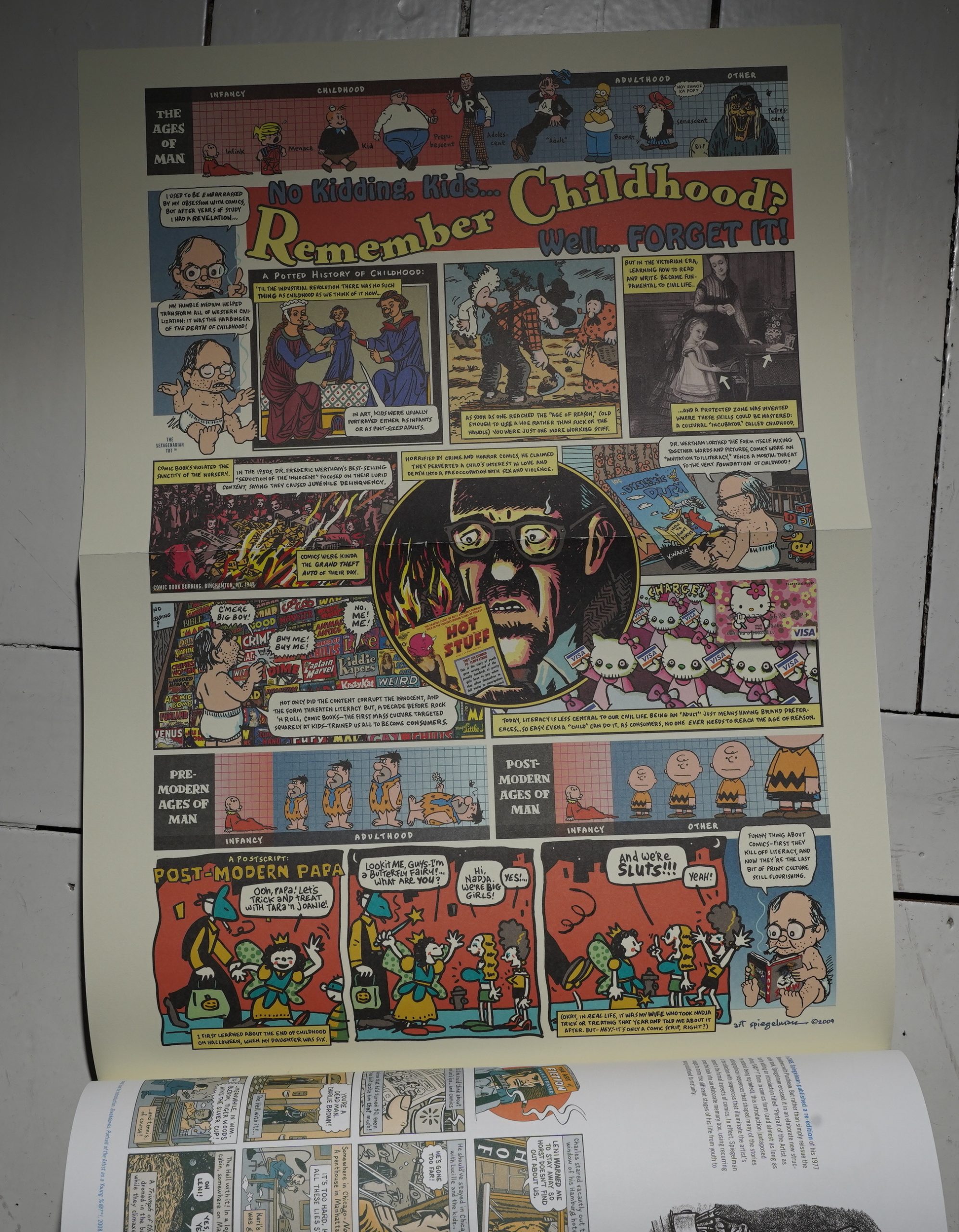 And a whole bunch of pages that fold out. 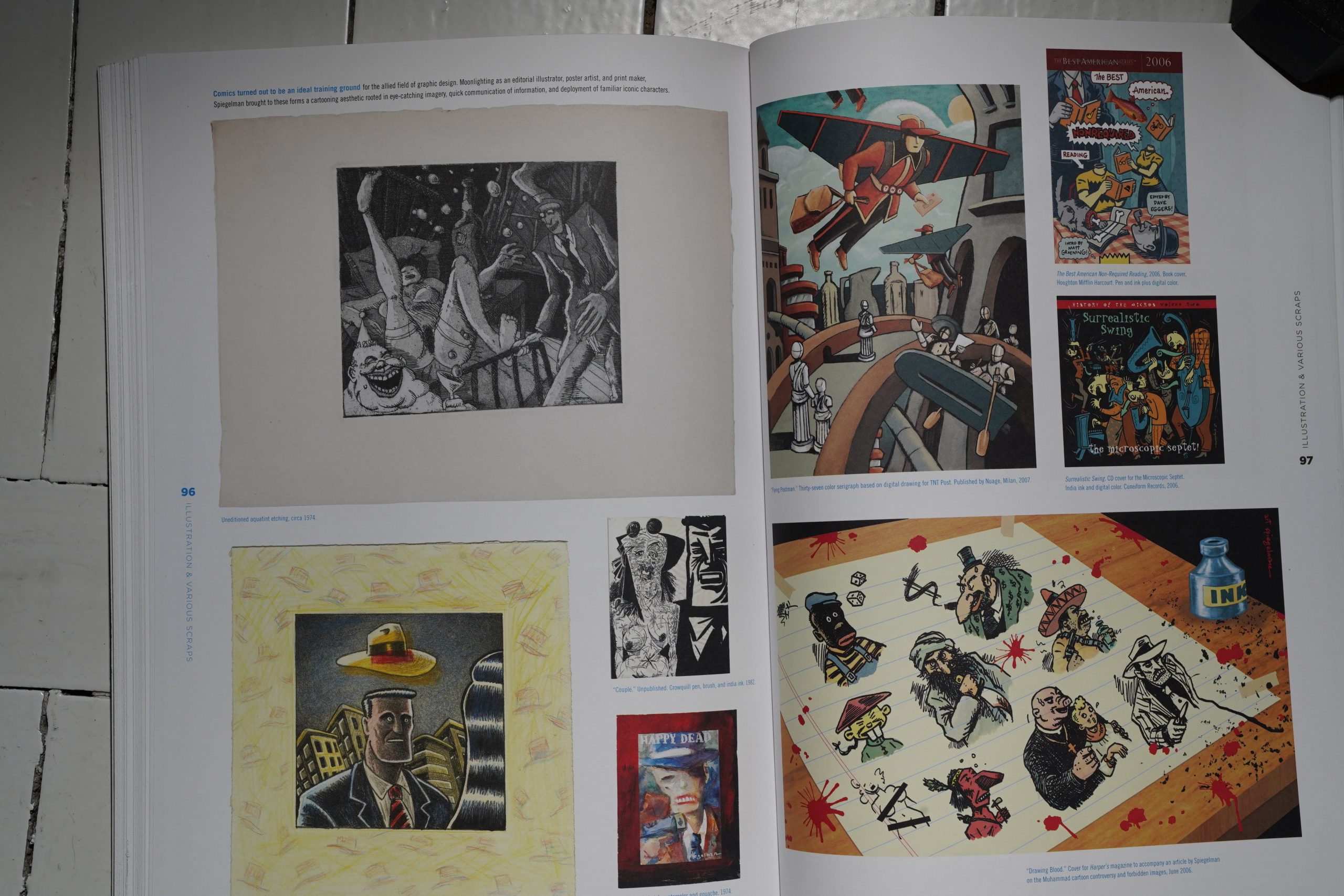 I can’t quite put my finger on why this book feels so slight. Reading it, I got more and more impatient with it all. It might just be me, though. Or it might be the… “design”… if you can call it that. 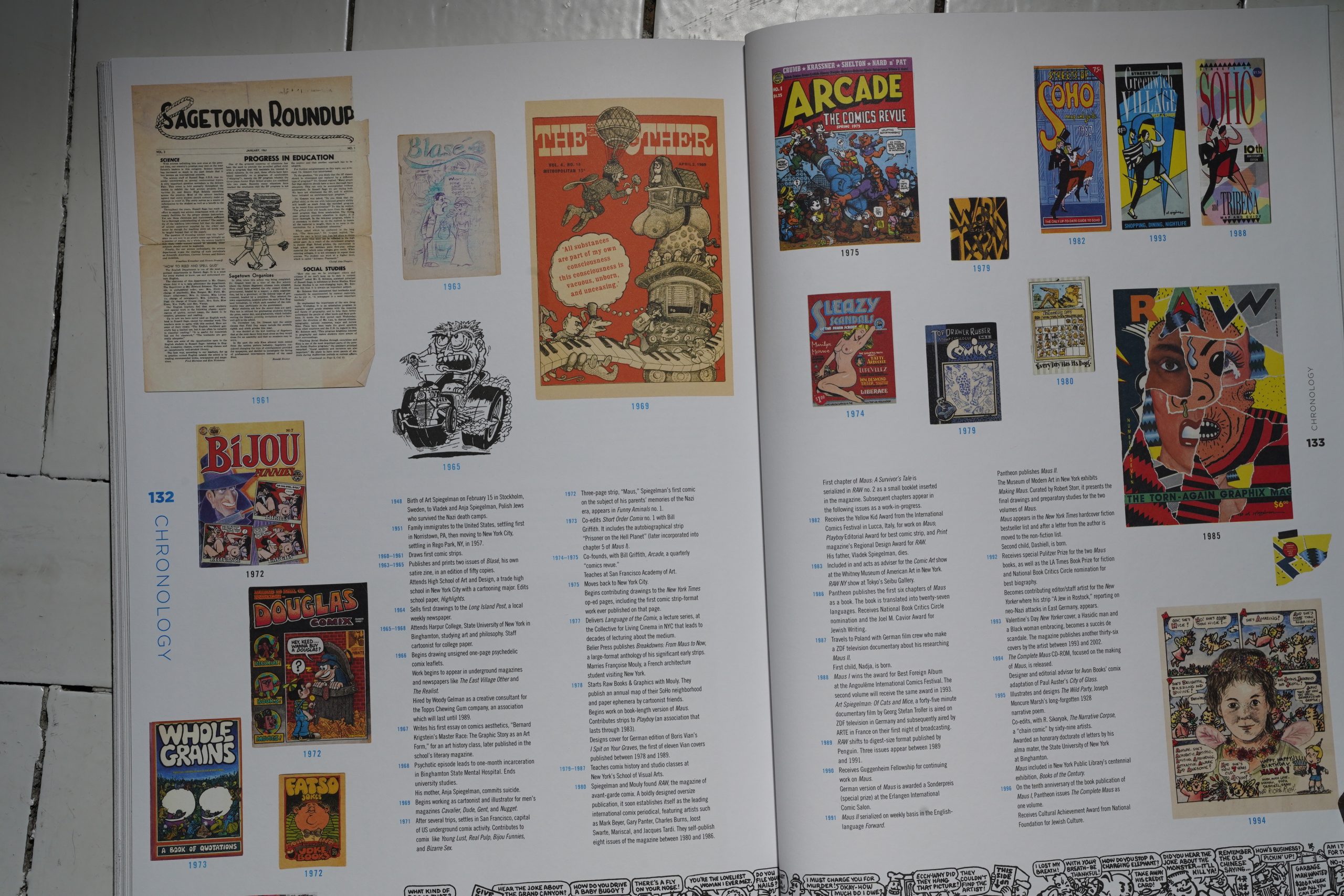 I mean, it feels very thorough. It just lacks whimsy or surprises or something to delight the reader, which was something you’d always find in something that Spiegelman and Mouly edited.

This is the least essential Spiegelman book ever. Breakdowns: Portrait of the Artist as a Young %@꩜🟊! (from 08) and the 99 catalogue are both vastly superior books if you’re interested in Spiegelman. Who is this book even for? Oh, yeah, to sell at that travelling art show, I guess…

Spiegelman’s work, seen through the wide-angle lens of Co-Mix is a quest to question everything in his life: childhood, culture, art (including comics), sex, drugs, politics, relationships, time, fatherhood, suffering, and history.

As with just about any project that is connected to Spiegelman, the book-catalog is impeccable in its execution and a good value, offering more comics, more art, and more ideas per pica than many similar publications. As such, it stands well on its own, separate from the actual exhibit.

It’s a fascinating book, that illuminates the overall development and working processes of one of the best ever graphic novelists and comics creators. Maus put visual artistry in the background, so we might forget what a master of visual communication Spiegelman is. The most avid fan will still find plenty new here, and the best pieces like the ‘Two Fisted Painters’ bound in pamphlet, are worth the price on their own.

Ultimately, this well-rounded retrospective of an renowned artist’s eclectic career is an illuminating read and makes for an exciting cultural artifact.

But this is definitely the final book I’m doing for this blog series! I mean it now! I’m packing up all the equipment so that I can’t even make another post even if I wanted to!