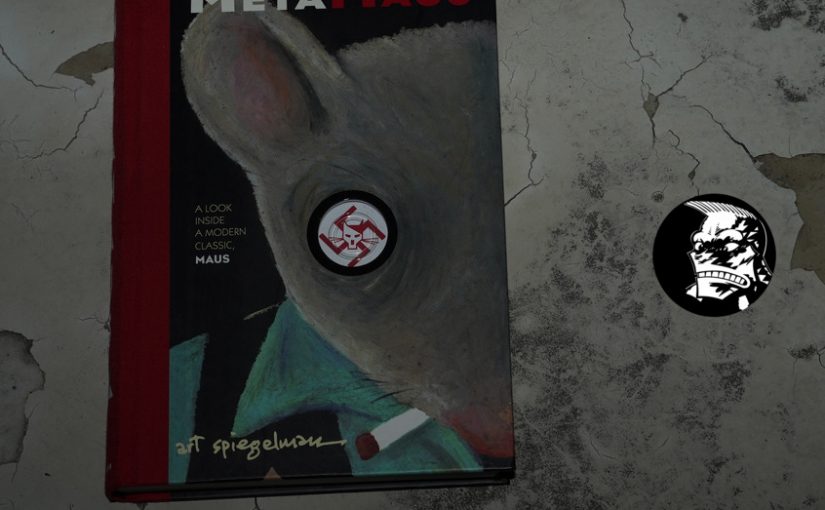 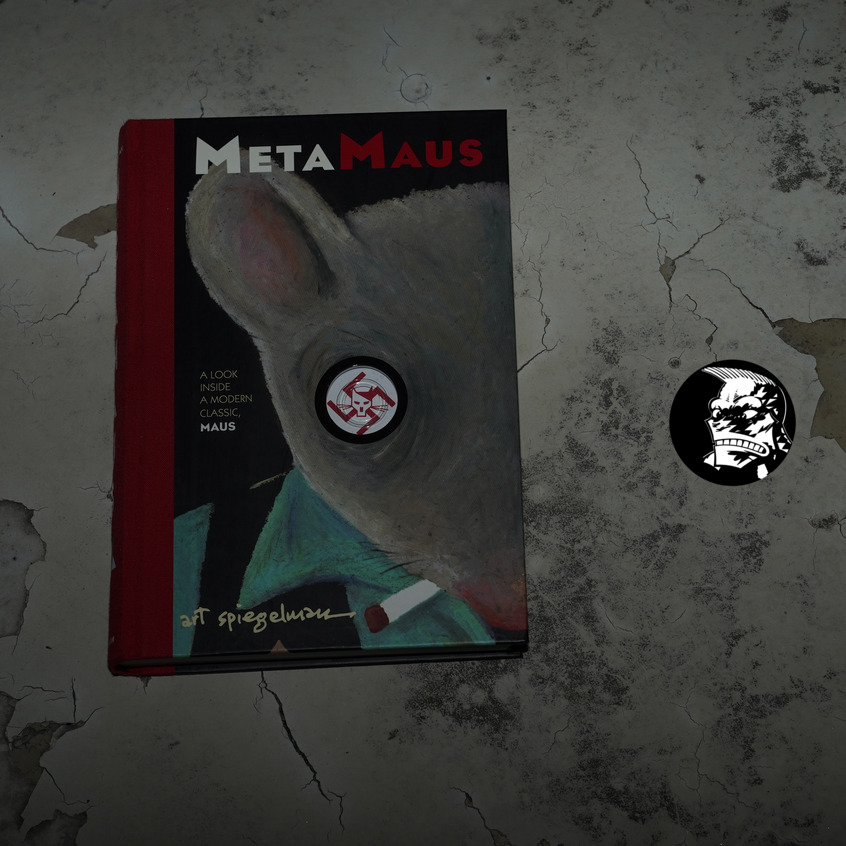 So here we are — the final post in this blog series about (sort of) the comics from the Raw Generation, or whatever we’re calling it this week. What started off with Mouly and Spiegelman printing stuff in their loft resulted in larger changes to the world of comics as literature than I think anybody could have imagined. 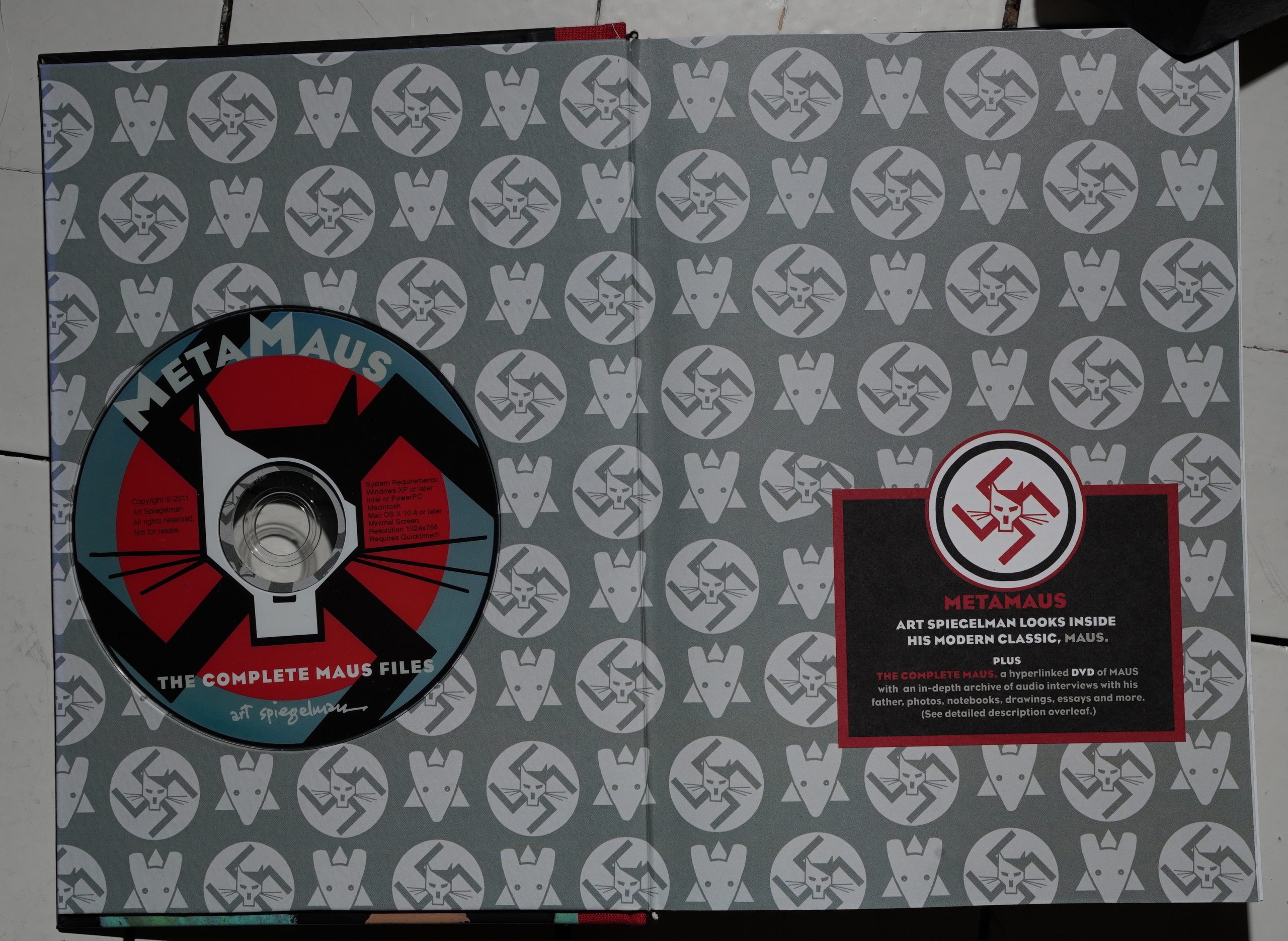 This is a lavish production, included a DVD ROM with oodles of background material. 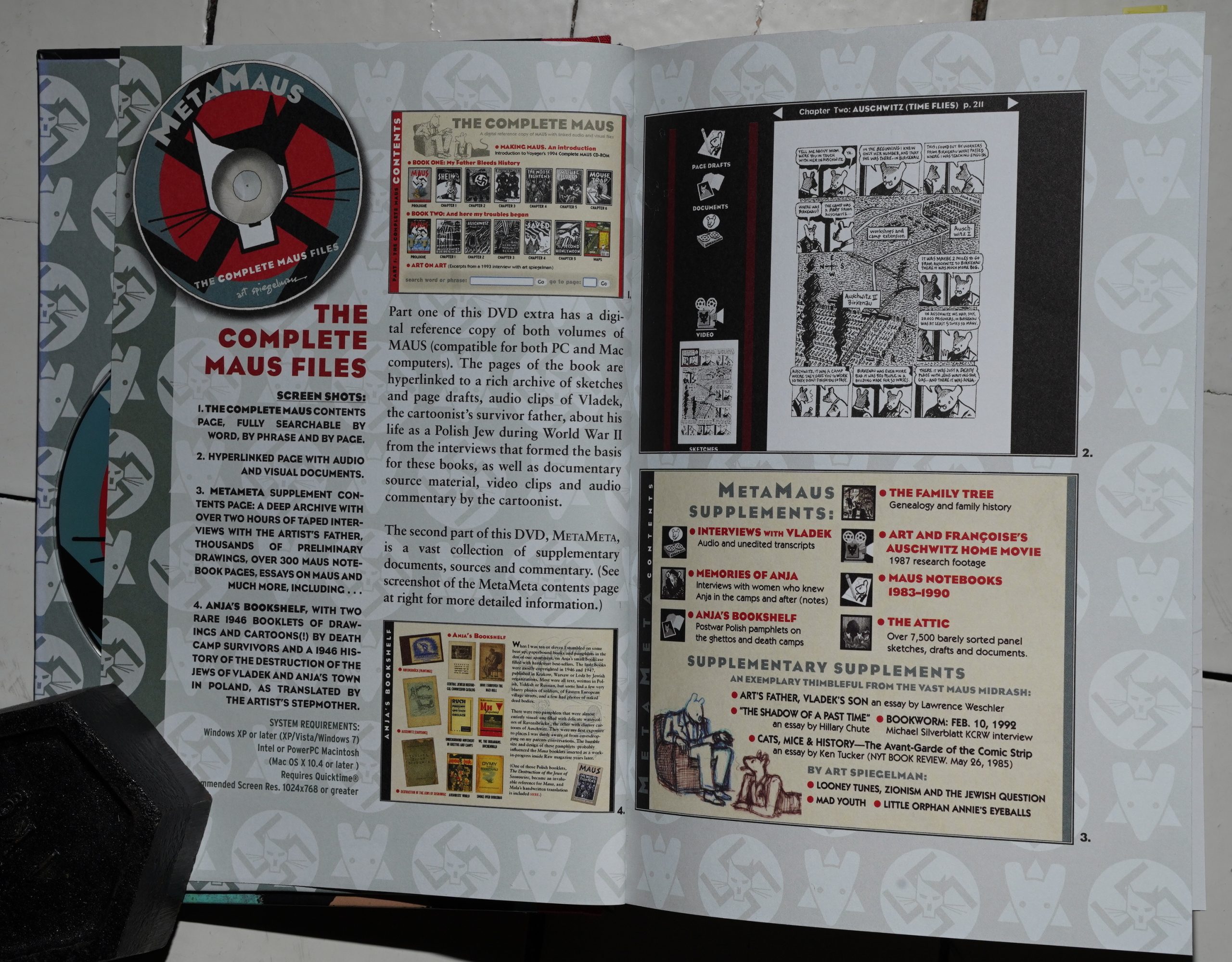 I mean… look at all this stuff. 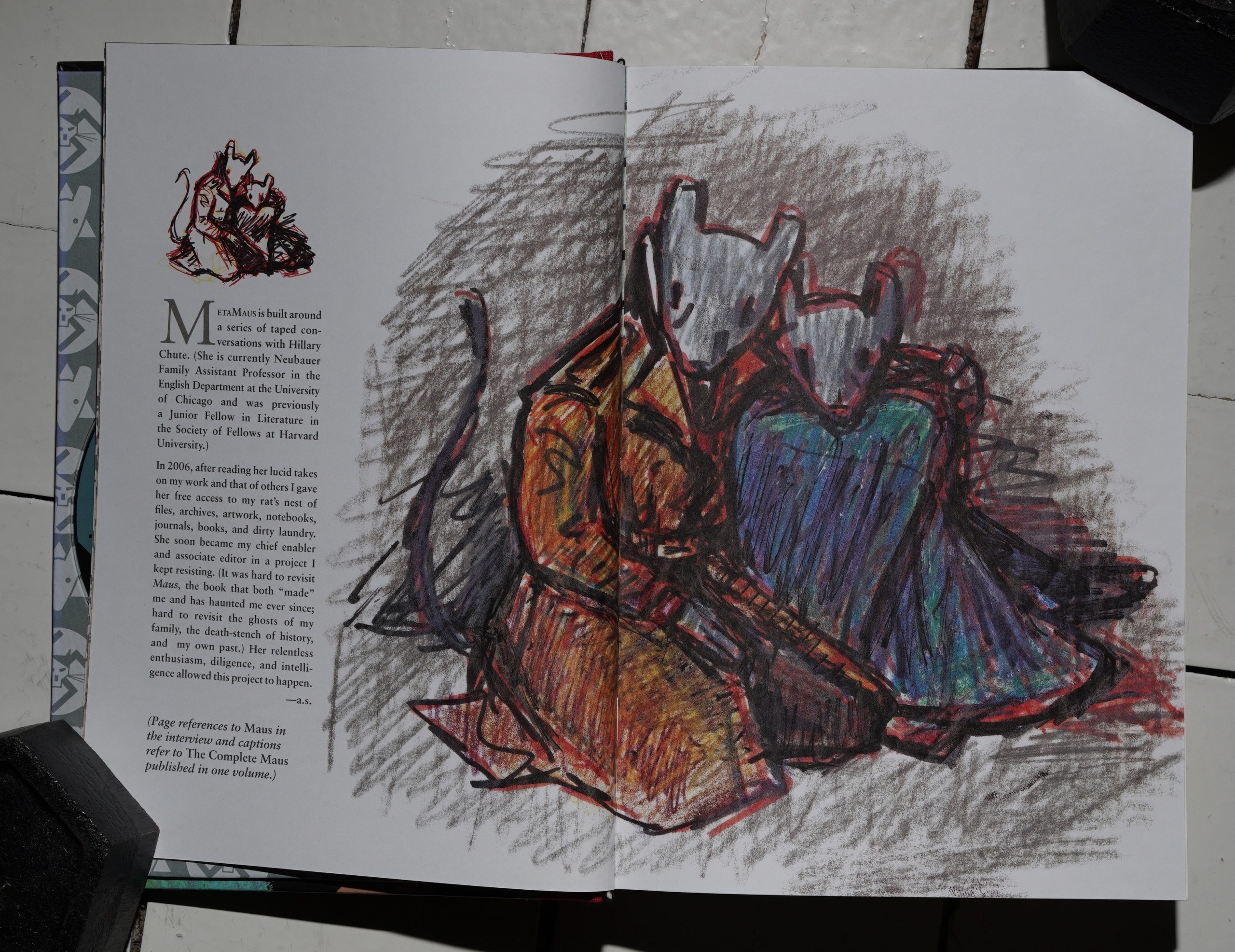 It’s a beautiful object, with all of this artwork reproduced perfectly. It’s obvious that a huge amount of work has gotten into making the book, which makes it frustrating that I can’t find where it says who the designer is. It’s really rare to see a book with no glitches whatsoever. 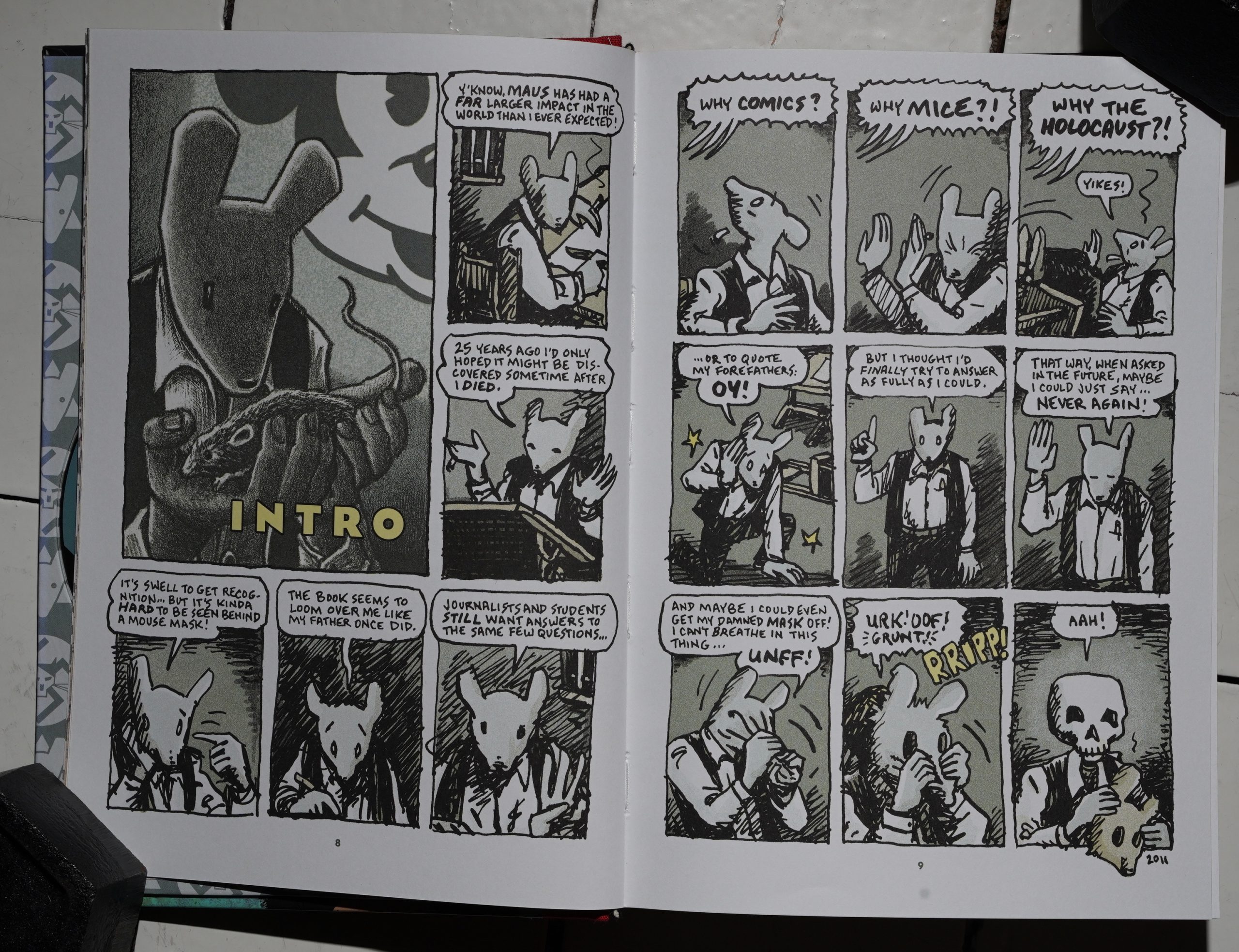 So: Spiegelman explains what this book is about. He’s tired of being asked the same three questions over and over again: “Why the Holocaust?” “Why mice?” “Why comics?” So he talks with Hillary Chute over 250 pages to answer these questions, once and (hopefully) for all. 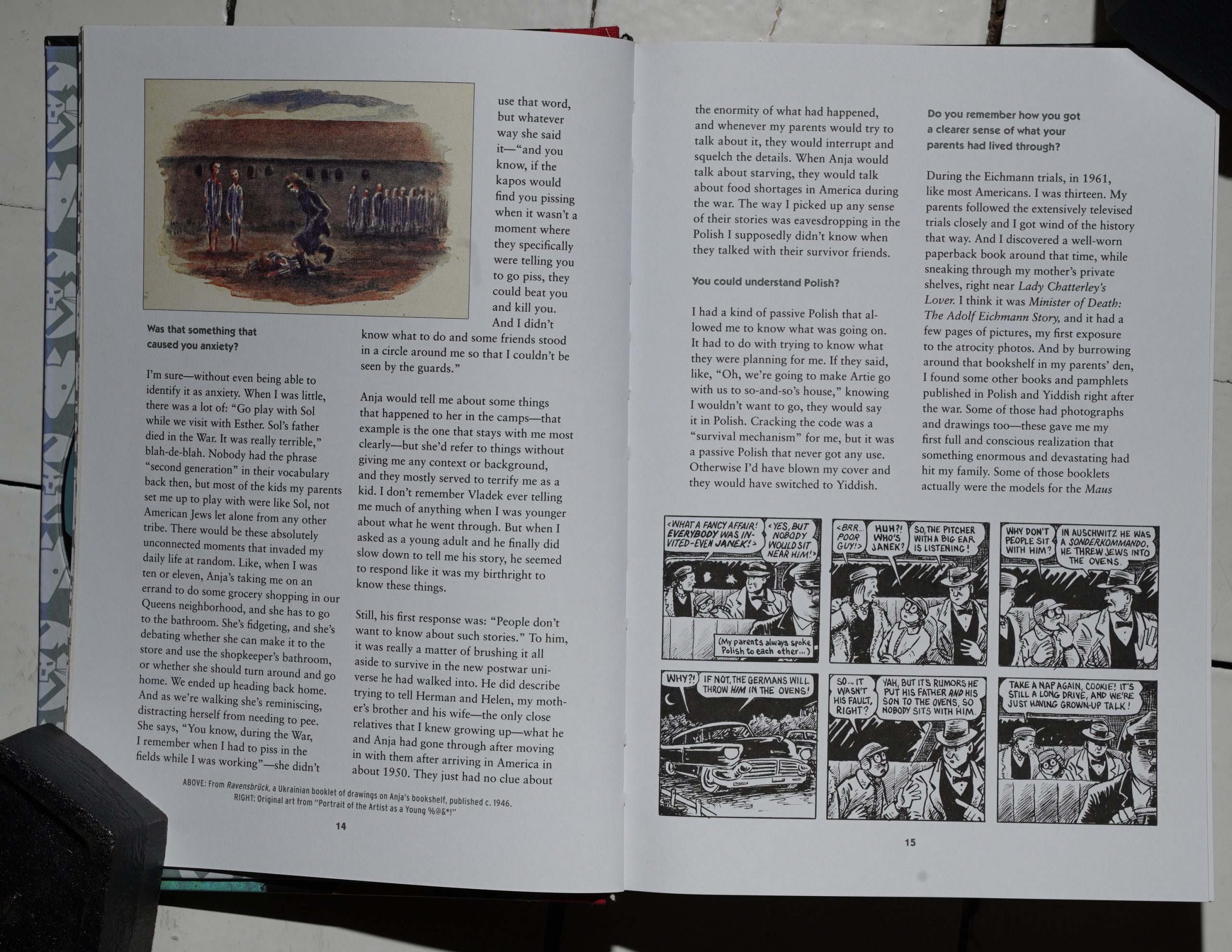 We touch upon other things in Spiegelman’s biography, but the book is admirably focused on Maus itself.

One of the many examples included that illustrate how thoroughly worked through every single panel of Maus has been. Endless sketches to get things just right. 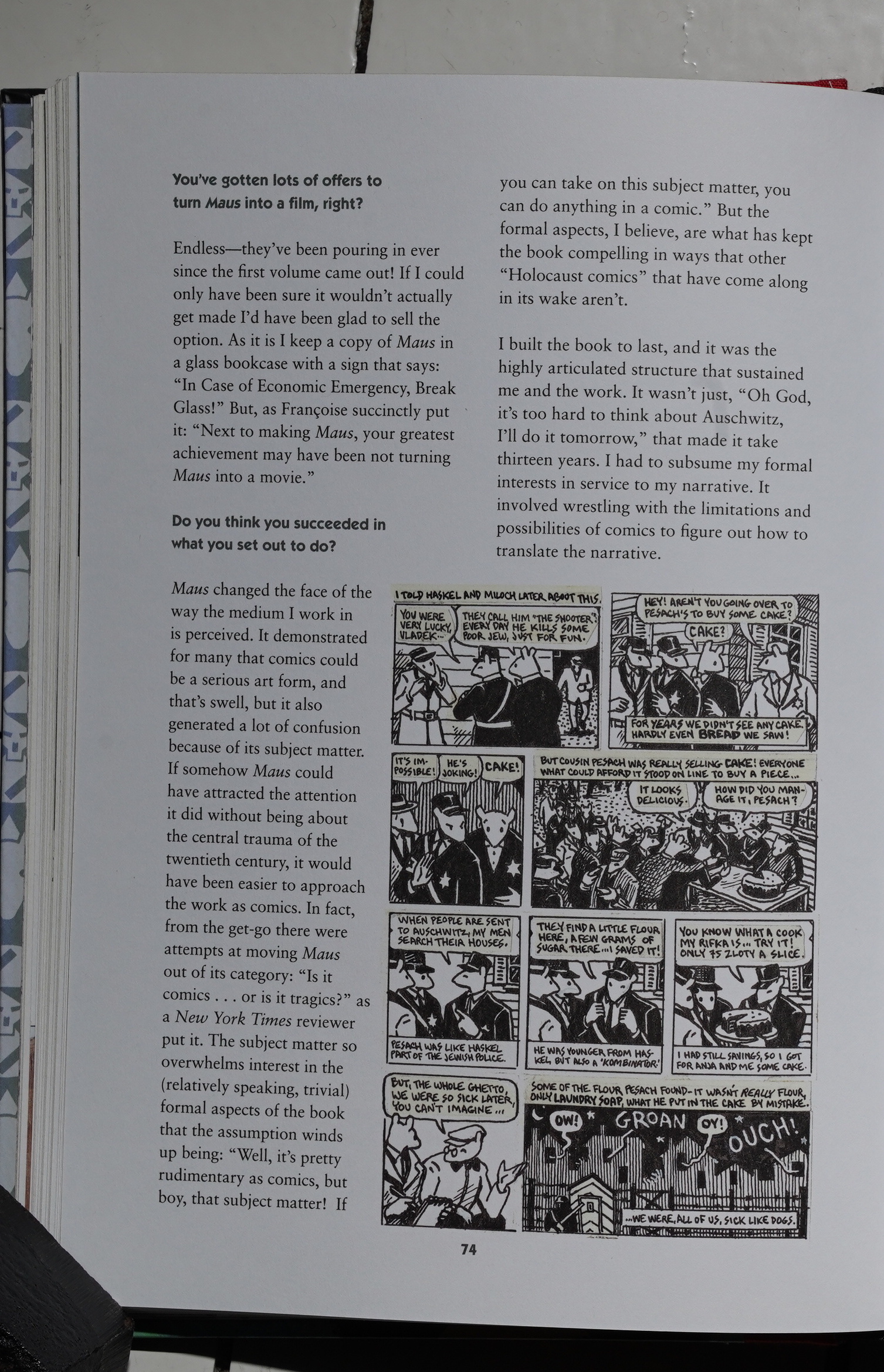 Spiegelman talks with insight about Maus and its place in history. And he’s also really entertaining to listen to, I mean read — the book flows very fast. 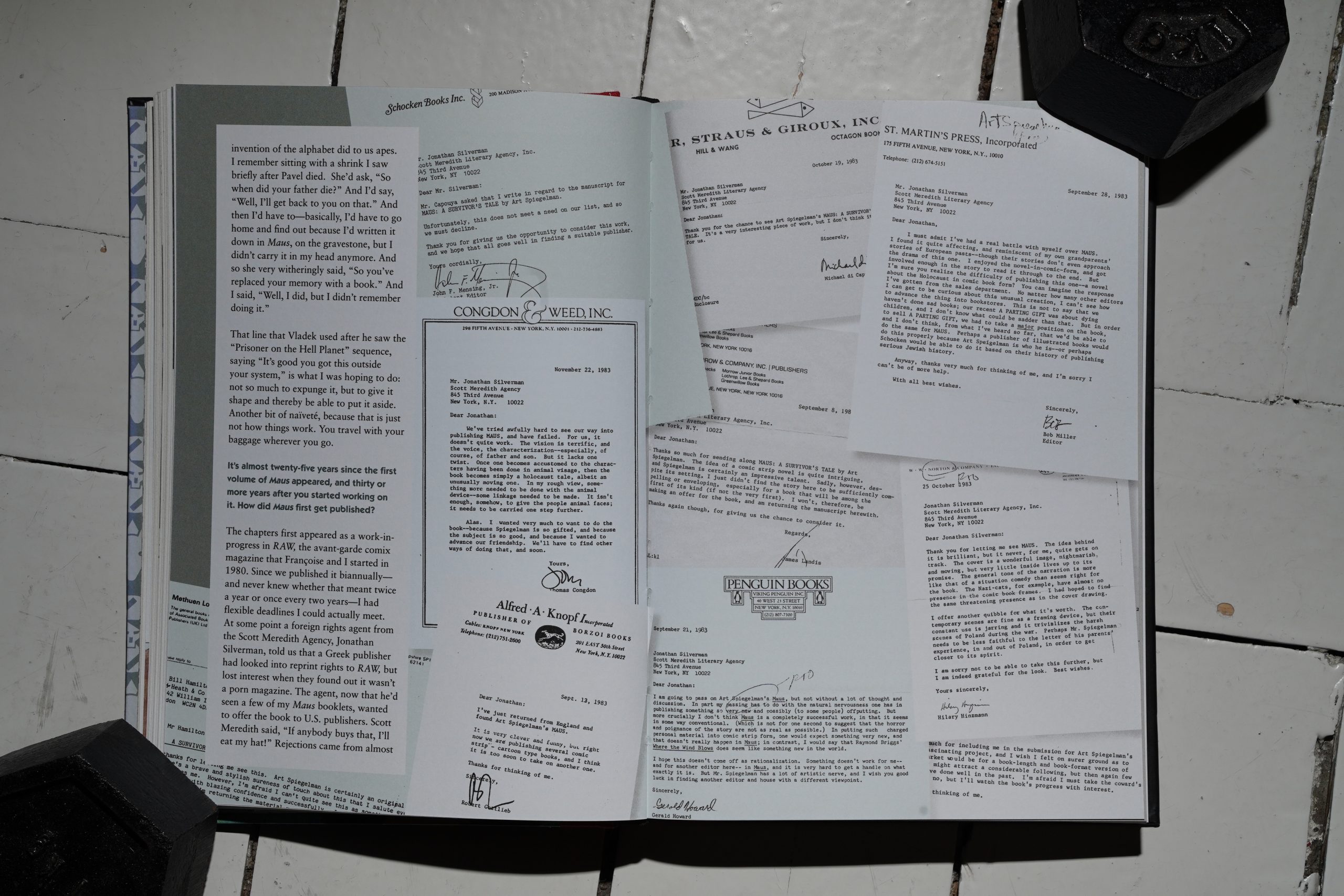 Some people treat Maus as if it were inevitable. “Sure,” they seem to say, “of course a comic book about the Holocaust would be a major success. Everybody knew that”, and that’s the go-to explanation for why no other comics broke through to the general literature-reading audience (before Fun Home proved them wrong).

But I have to admit that I was shocked and amazed by these pages: Maus was offered to (basically) every single publisher imaginable, and they all passed on it. Some write pretty meretricious responses (like “we already have a cartoon book on our schedule”), and some write a bit about how much they liked it personally, but they can’t see any way to market it. 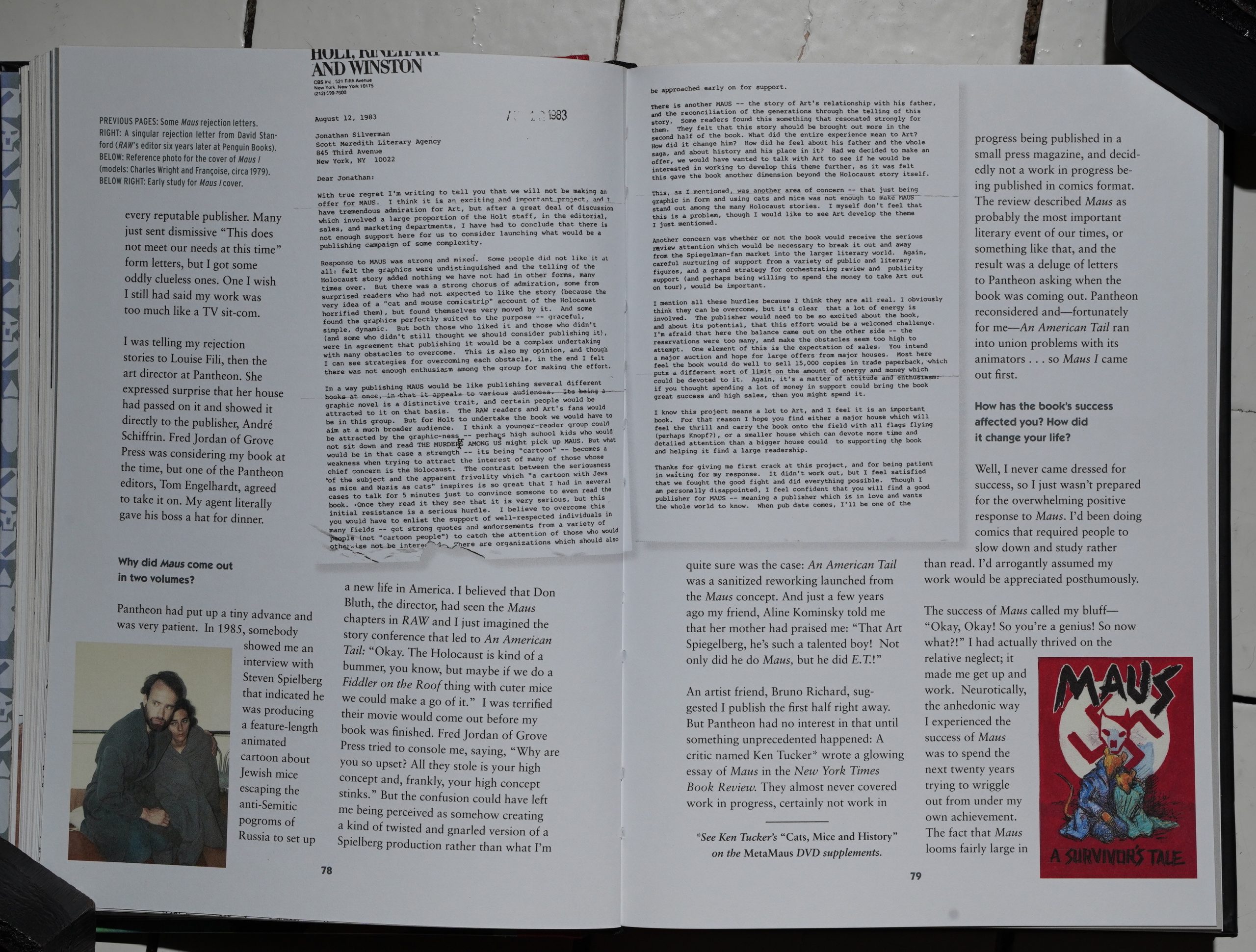 That it was about the Holocaust wasn’t a selling point for the publishers: It was the main sticking point. They wanted nothing to do with it, and they thought it was impossible to market.

It seems the only way the book got published was because Spiegelman knew the art director at Pantheon personally, and she convinced the publisher to take it on.

Imagine a slightly different world, where Maus had only been published as in insert in Raw? Where it would have been something fondly remembered as “hey, remember that thing? in the 80s? that was great, dude” by some old comics nerds. 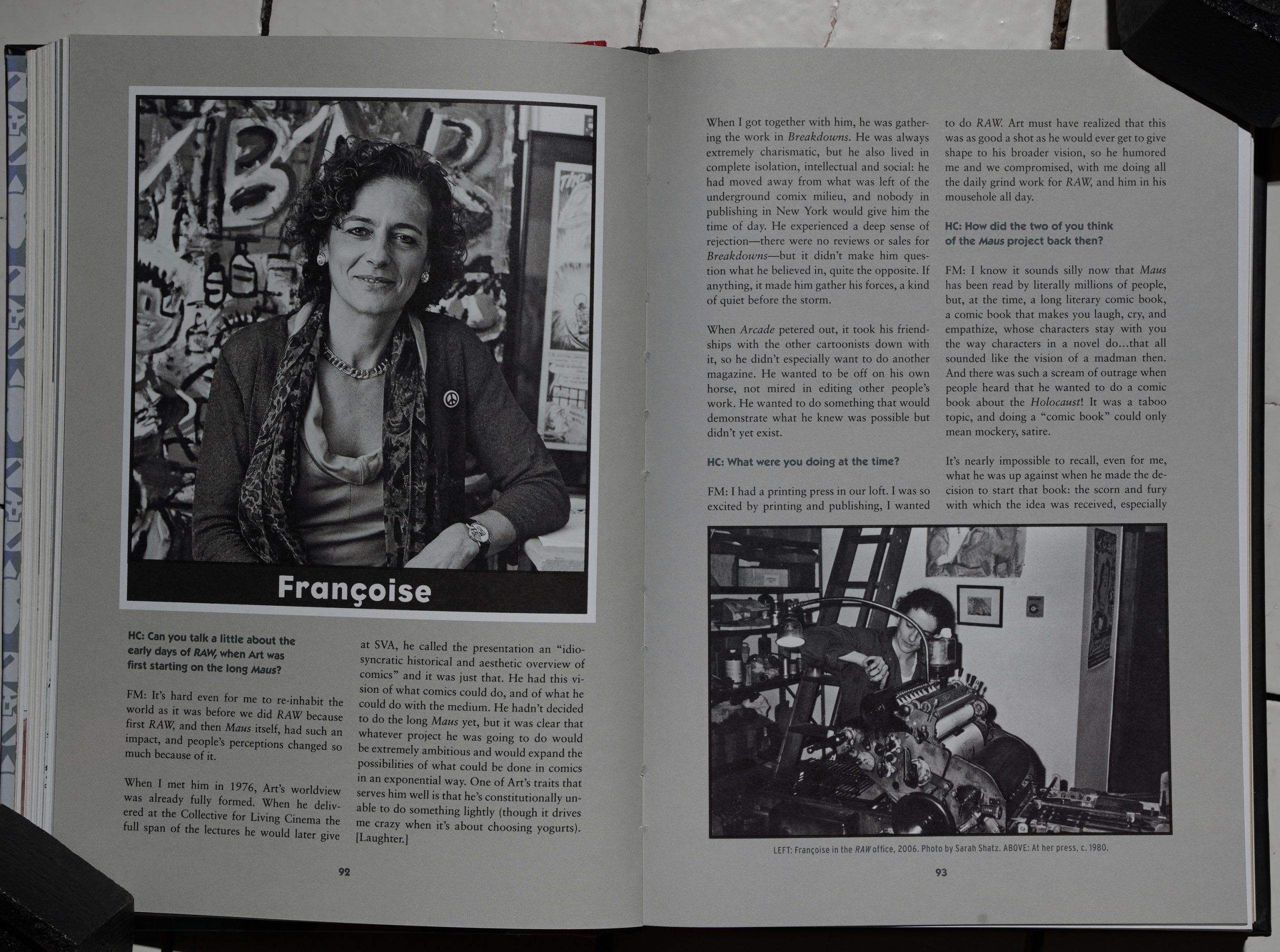 We get interviews with Françoise Mouly (and Spiegelman and Mouly’s two children), and even these interviews are really focused on Maus. And I have to say that I love that picture of Mouly fixing up her press in 1980. 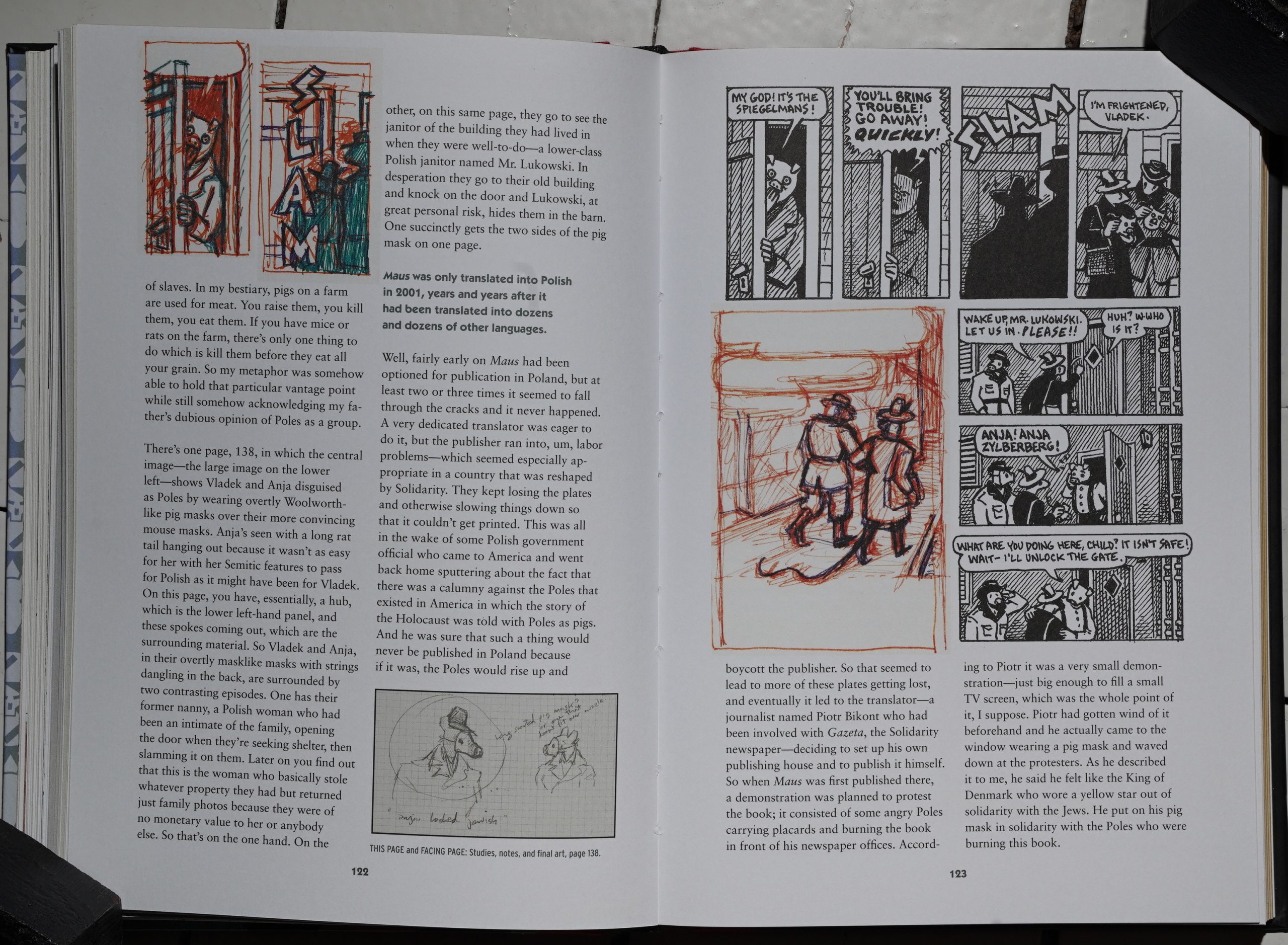 Quite a bit of this book is about the reception Maus got. I’m especially amused by the tale of the Polish edition, which got active sabotage by people working on it, it sounds like (and the editor finally had to set up a new publishing house to get it done). 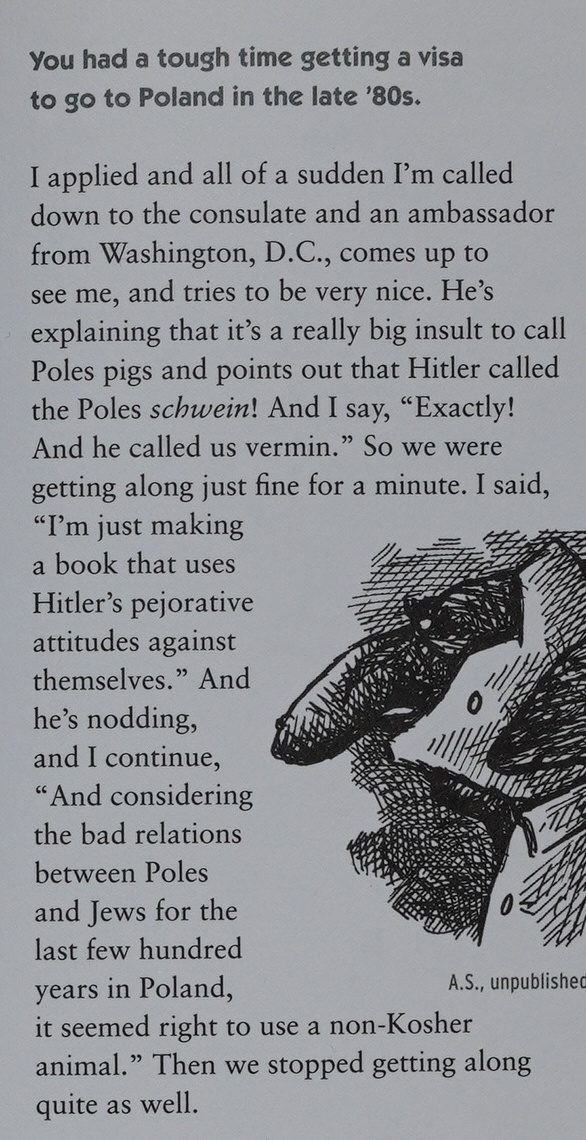 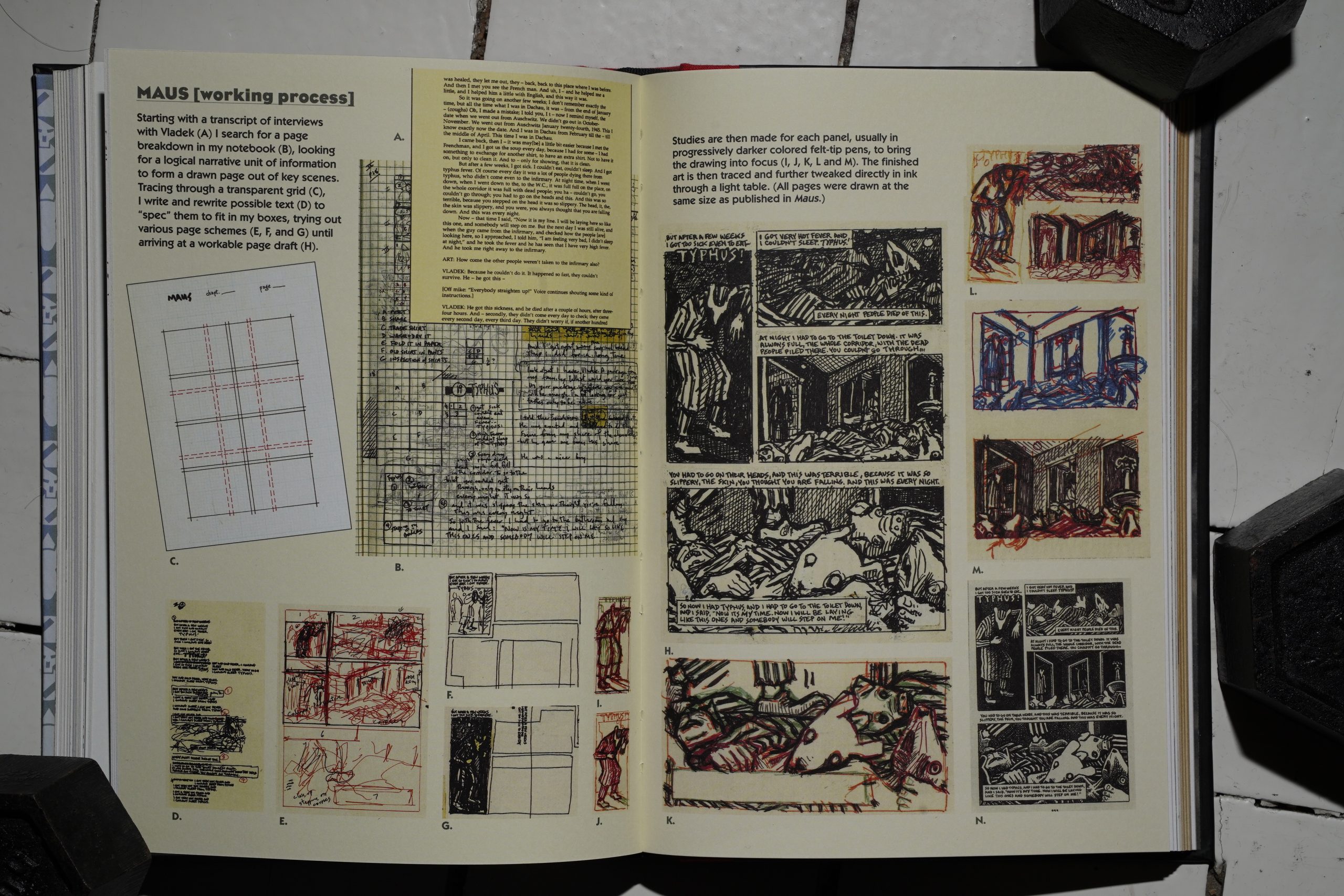 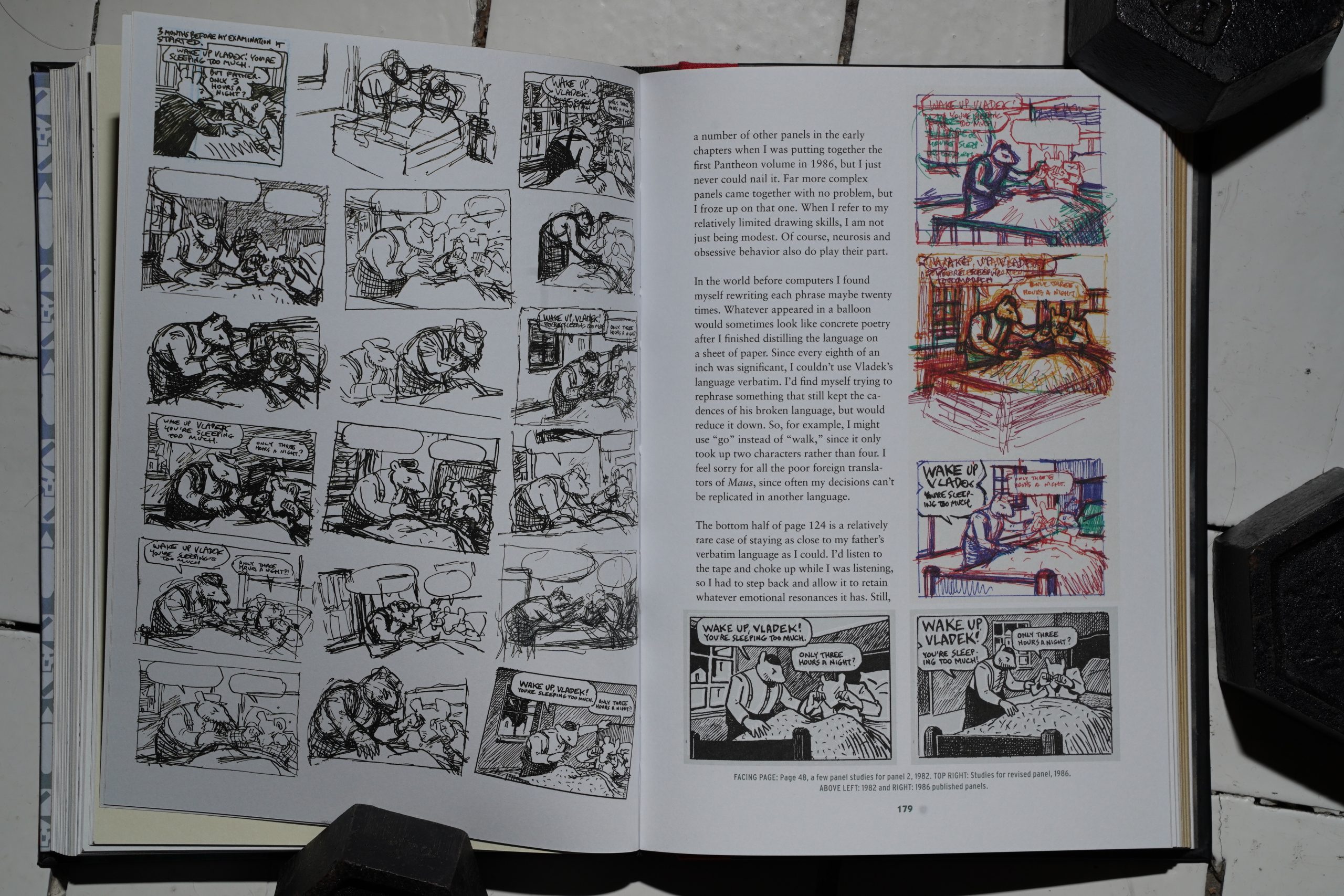 So much work has gone into the book — here’s one particularly recalcitrant panel that just wouldn’t come together, for instance. 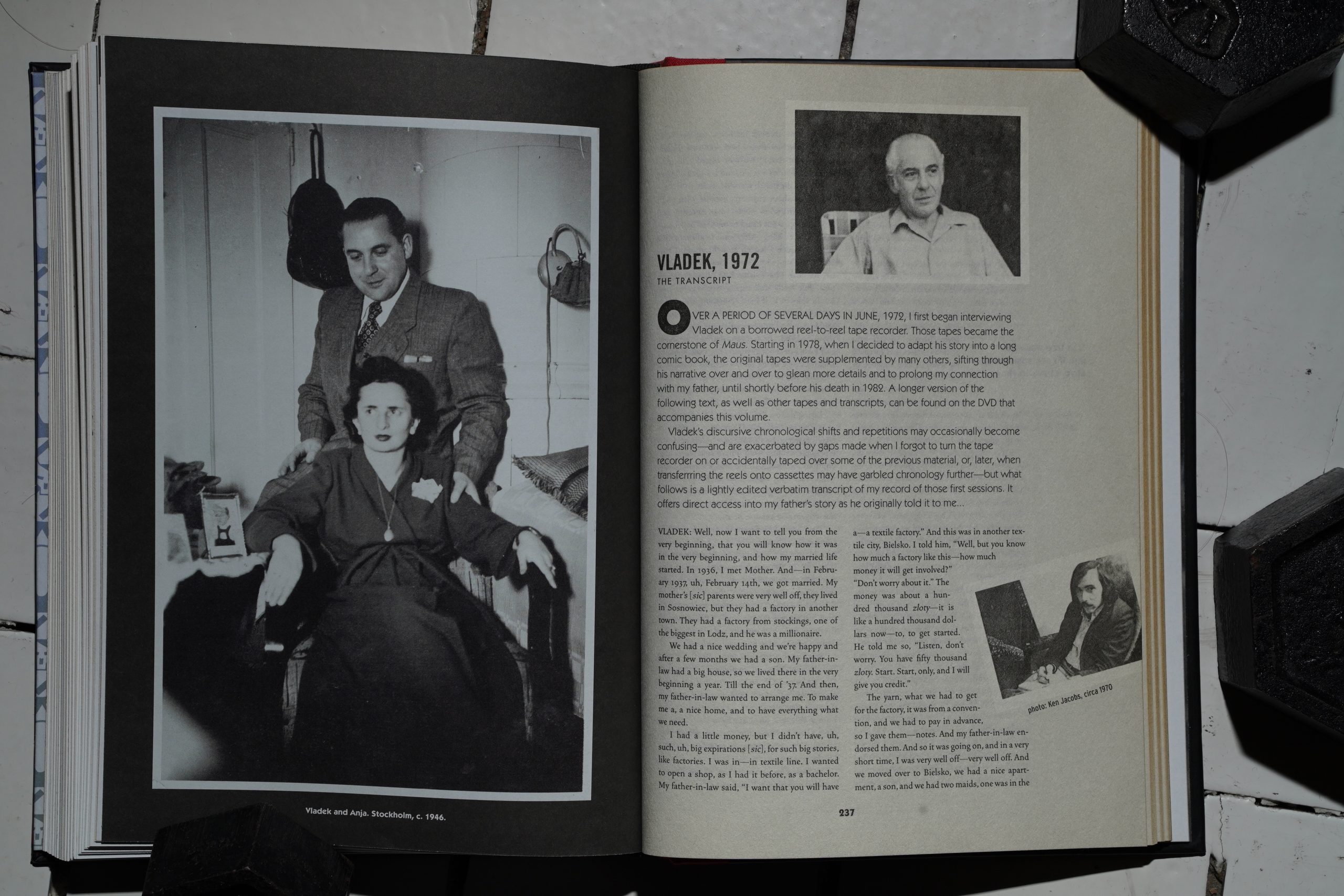 The book ends with an edited version of the Vladek transcripts. 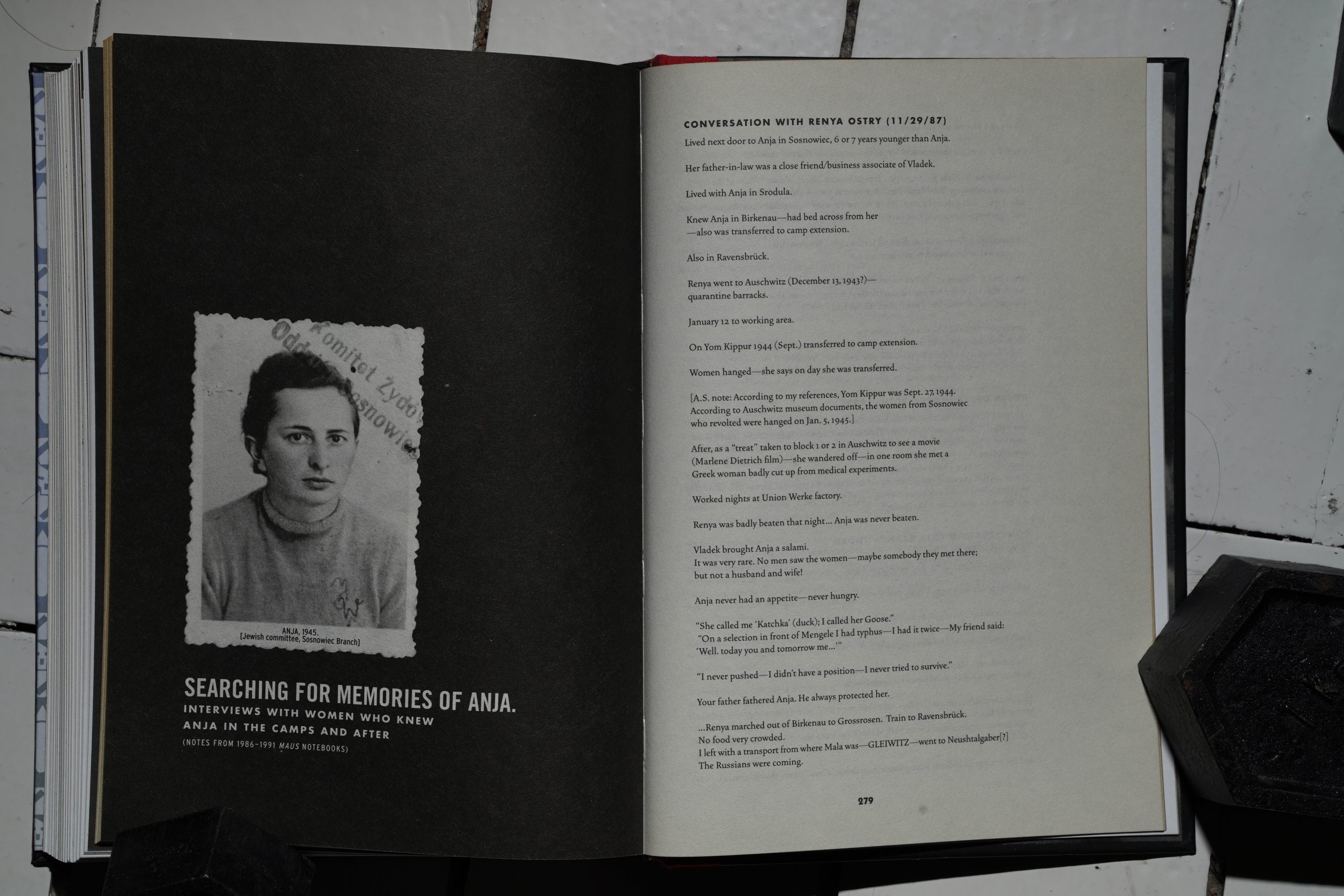 And then some of the people Spiegelman contacted to learn more about Anja’s story.

The book’s a classy job.

Wow, this is a condescending review:

Mr. Spiegelman’s new book, “MetaMaus,” functions as a kind of artist’s scrapbook, chapbook, photo album and storage trunk. Packed with more extras than a new “Transformers” DVD, it’s a look back at “Maus” and its complicated composition and reception. His publisher calls this shaggily engaging volume, accurately enough, a “vast Maus midrash.”

An extended Q & A with Mr. Spiegelman, a kind of swollen Paris Review interview, fills most of the book’s pages, while arty and inky things pack the margins: draft sketches from “Maus”; personal photographs; family trees; official documents like his mother’s passport and his parents’ arrest records from Auschwitz.

OK, that’s it. This blog series is now over, done and finitio. Well. Except for a post tomorrow that sums up the series, and then an index or two.