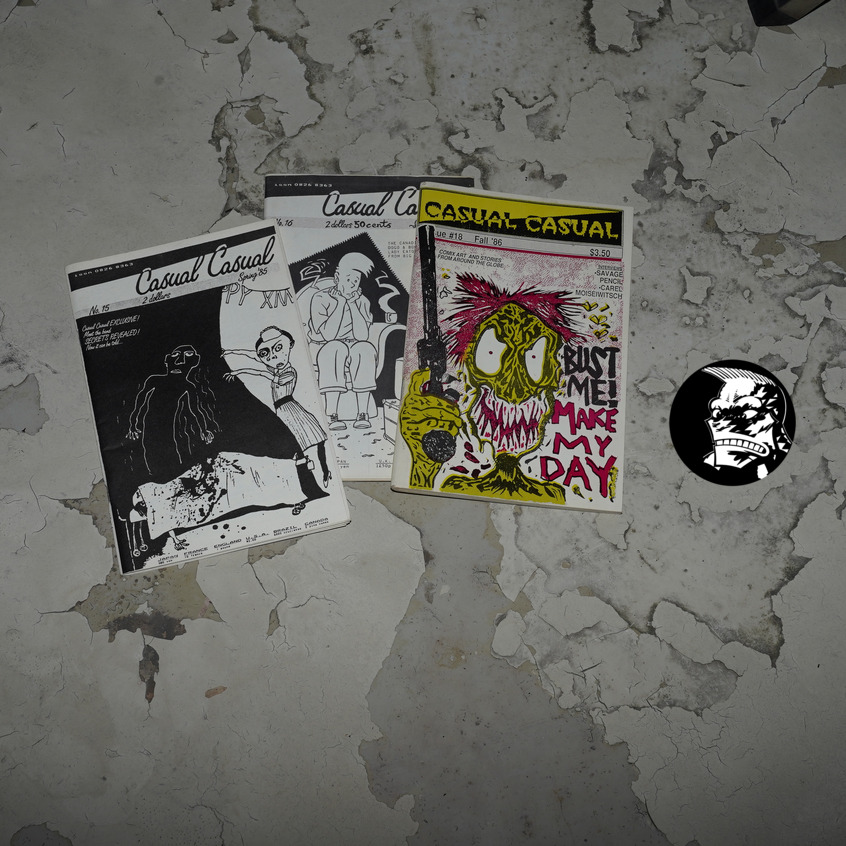 I’ve never read Casual Casual before — I was vaguely aware of it, but no copies wended themselves my way. But while researching stuff for this blog series, I happened upon somebody selling a bunch of them on ebay, and I managed to score these three issues.

The first nine issues were apparently all done by Dako, but he branched out into an anthology format by issue #10, and the list of contributors certainly look interesting. So let’s look at these three issues: 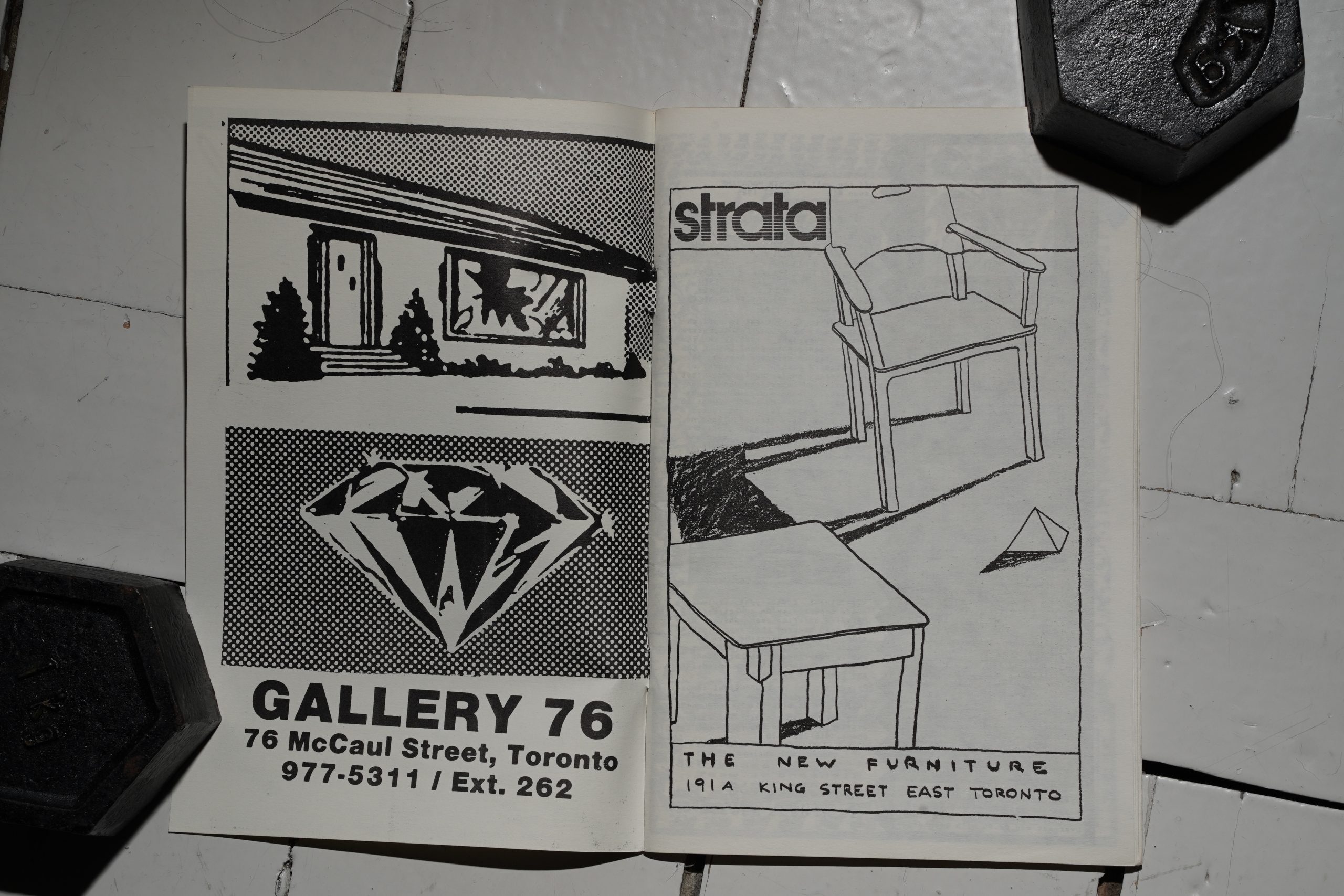 I’m surprised at the amount of ads in these books. I don’t mean that as a criticism at all — I’m just surprised that he got (mostly Toronto) shops to take out an ad in a comics zine like this. I’m guessing not that large a portion of the copies sold were in Toronto? Dako must be a merciless and talented salesman. 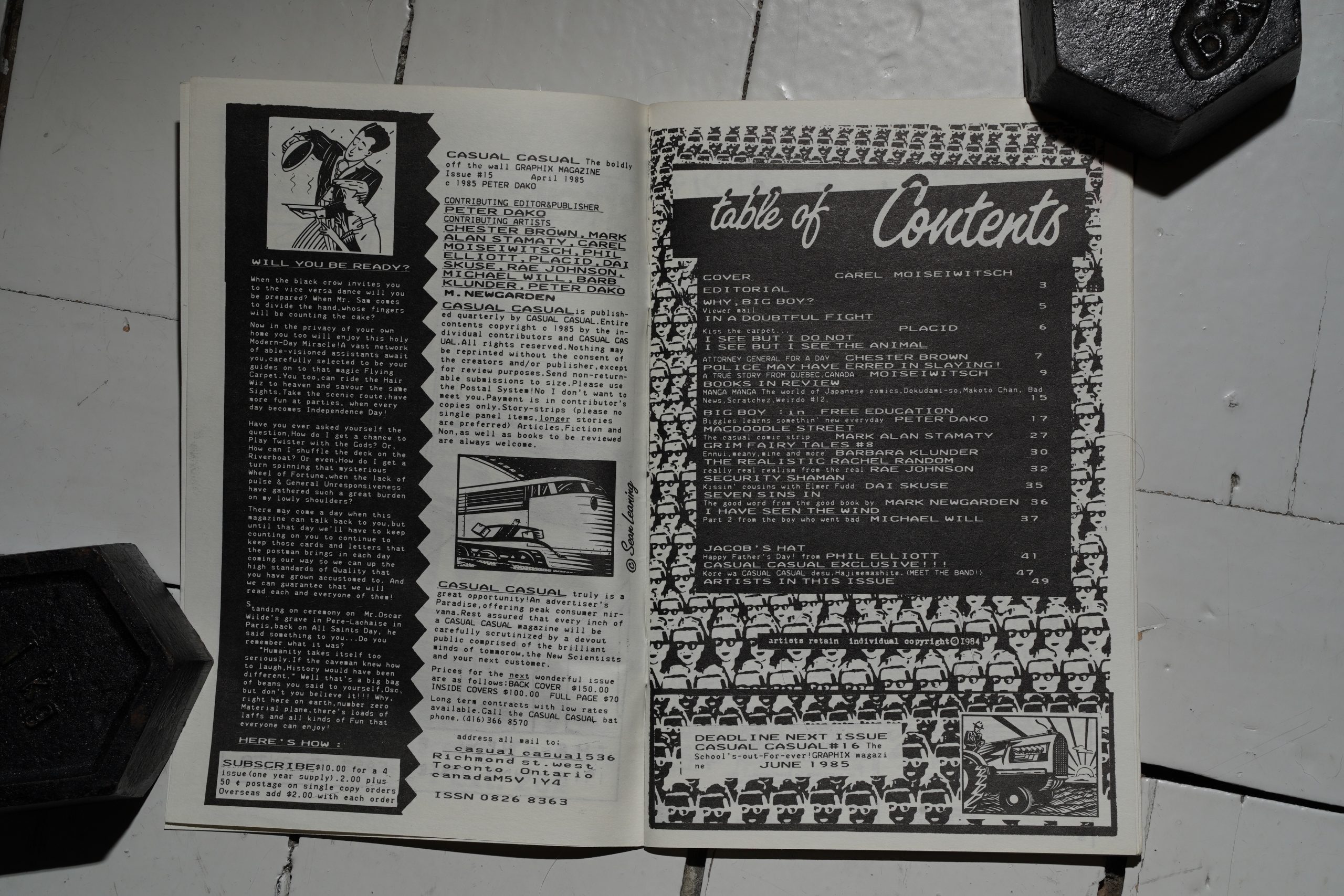 It’s not a typeset zine — it all seems to have been done with the help of some very early Mac machines and printers? (I’m guessing.)

And contributors are paid in copies of the zine. 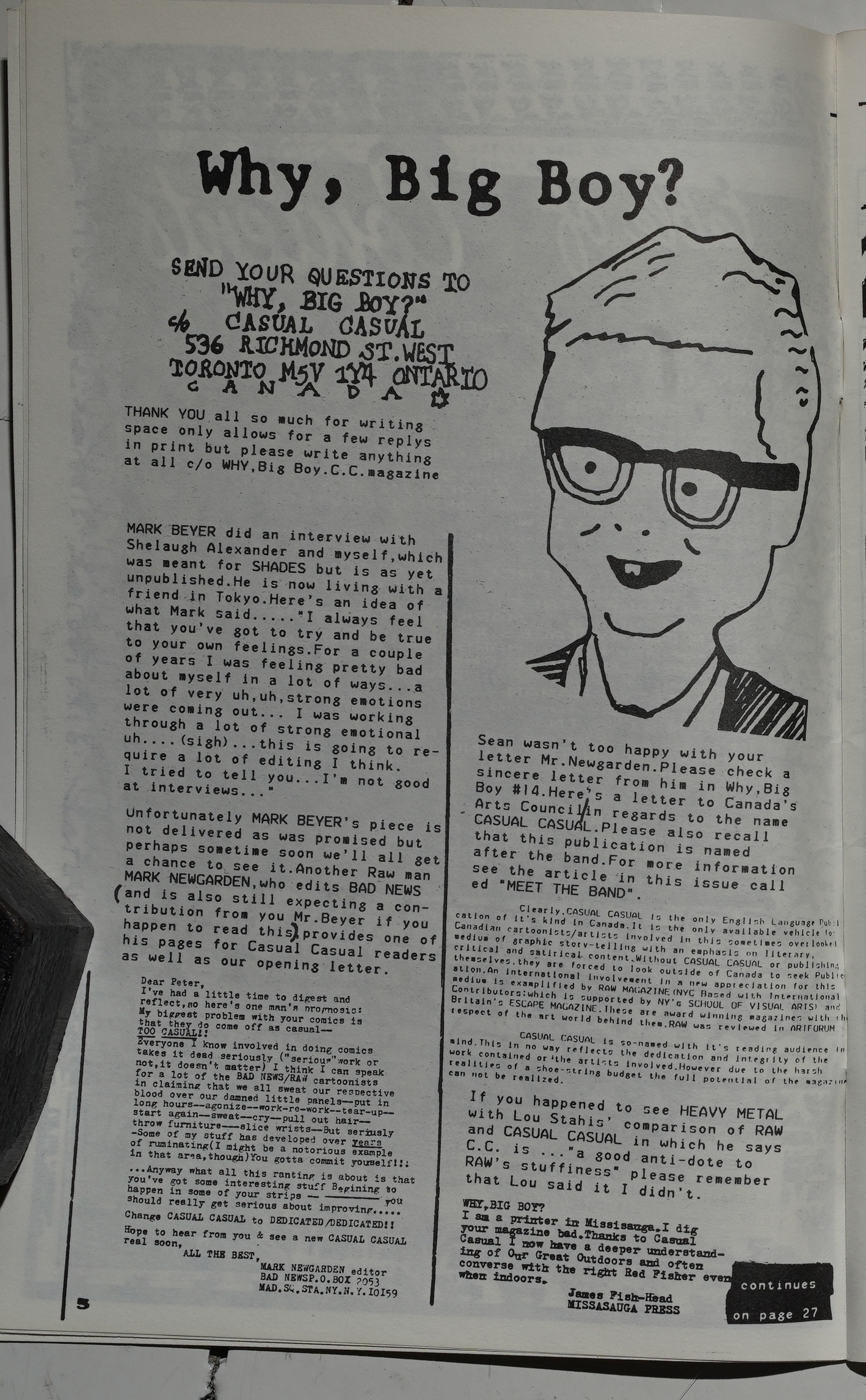 Mark Newgarden writes in to say that Dako’s own strip sucks (I’m paraphrasing) in a very stern tone. “You gotta commit yourself!!!” Dako, meanwhile, is asking for money from the arts council, and mentions that Artforum has reviewed Raw. 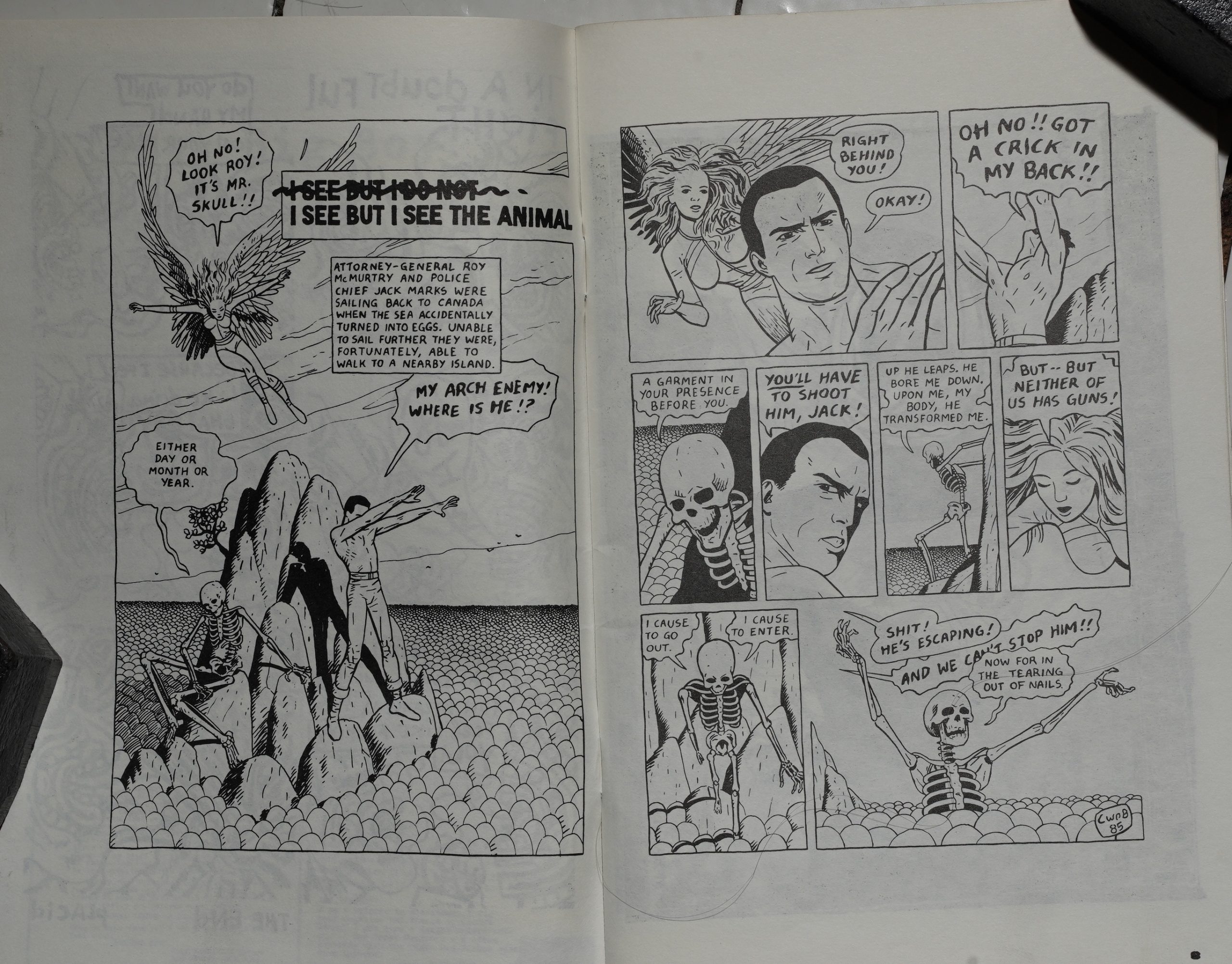 What the… a Chester Brown thing? I didn’t even know he could draw in this style. In a slightly different universe, I guess Marvel could have hired him as an inker. 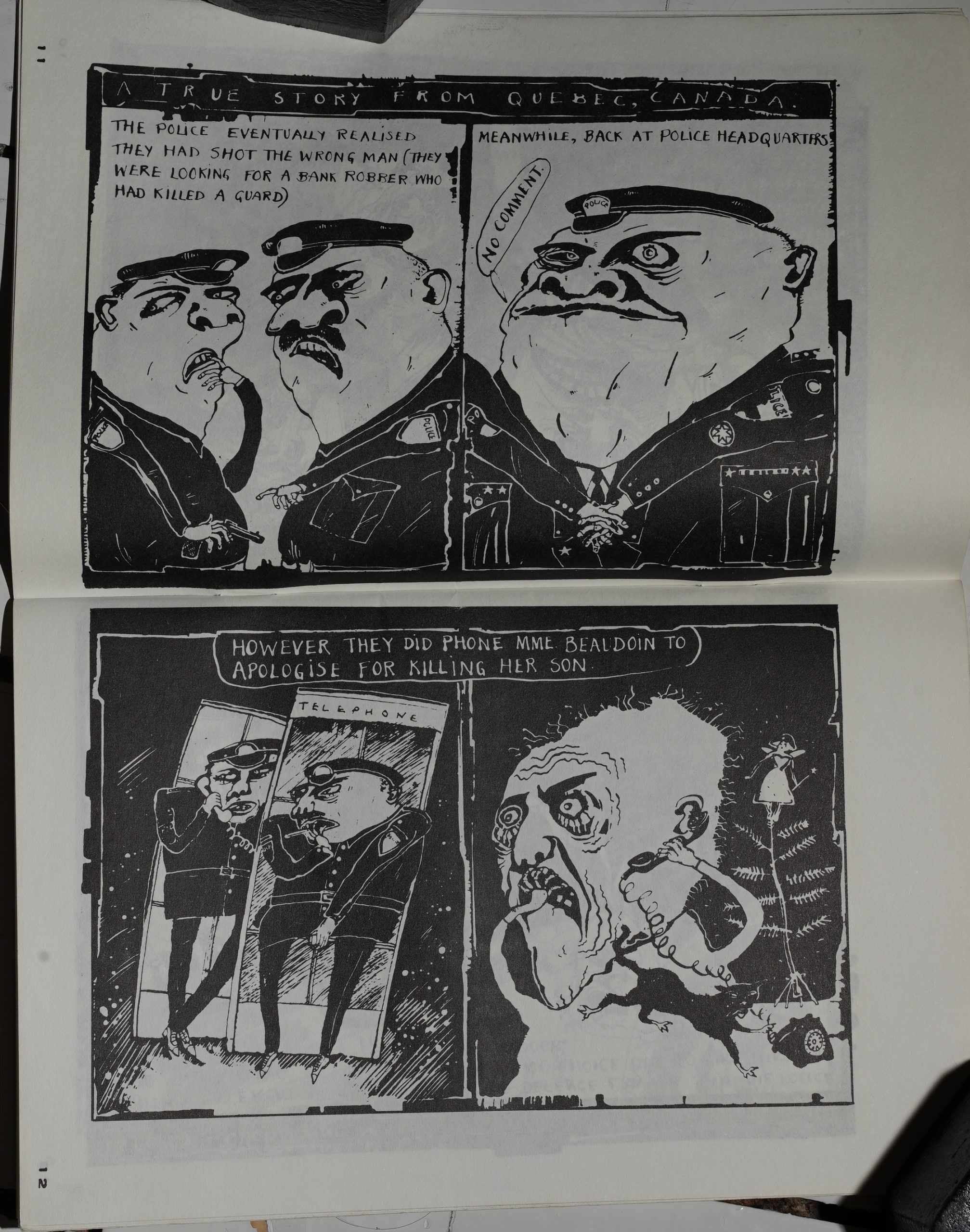 This is apparently Carel Moiseiwitch’s first published strip — Casual Casual was the first mag that realised her genius. She tried to sell it to a newspaper first, but it was rejected by the senior editor as being “too dark”. (By the way, there’s a fundraiser to rebuild her studio after it recently burned down.) 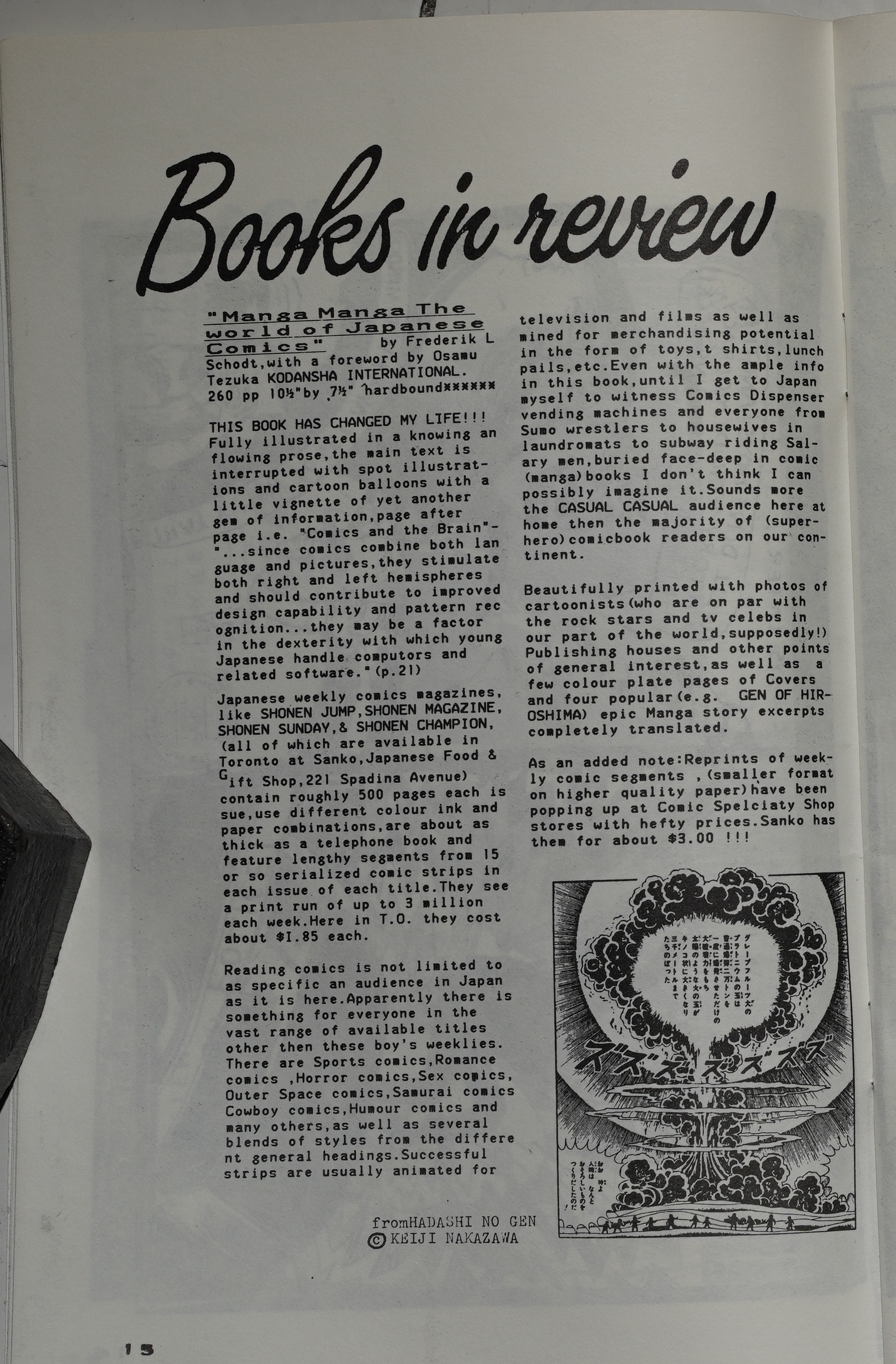 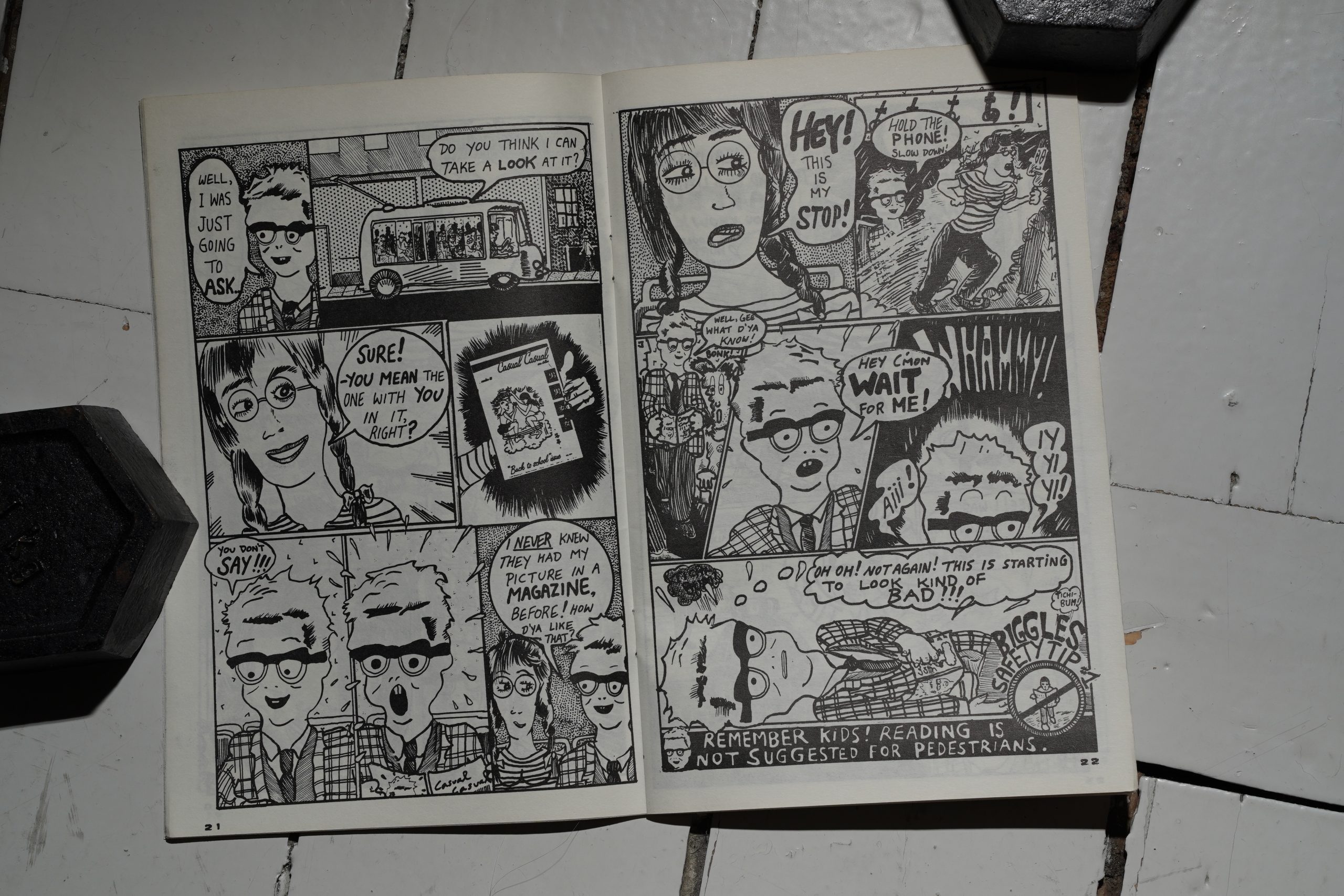 Casual Casual is a very uneven zine. That is, there’s some good stuff (Moiseiwitch etc), and there’s a whole lot of more, er, amateurish stuff. The worst of the bunch is the stuff by Dako himself, and it takes up a lot of the room here. I totally agree with how I paraphrased Newgarden. 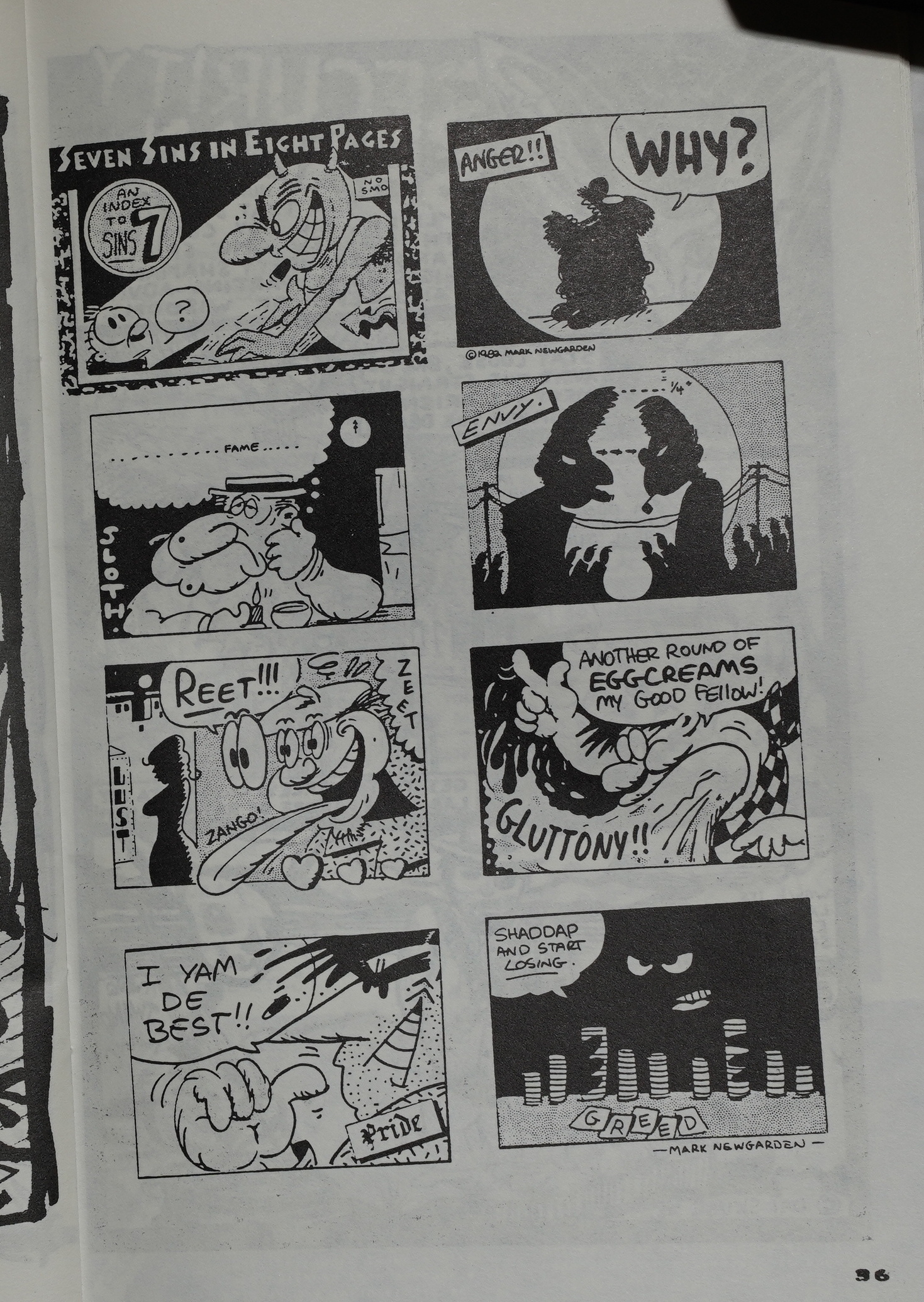 Casual Casual has a very club-house feeling, with people who are writing in letters also appearing in the book… 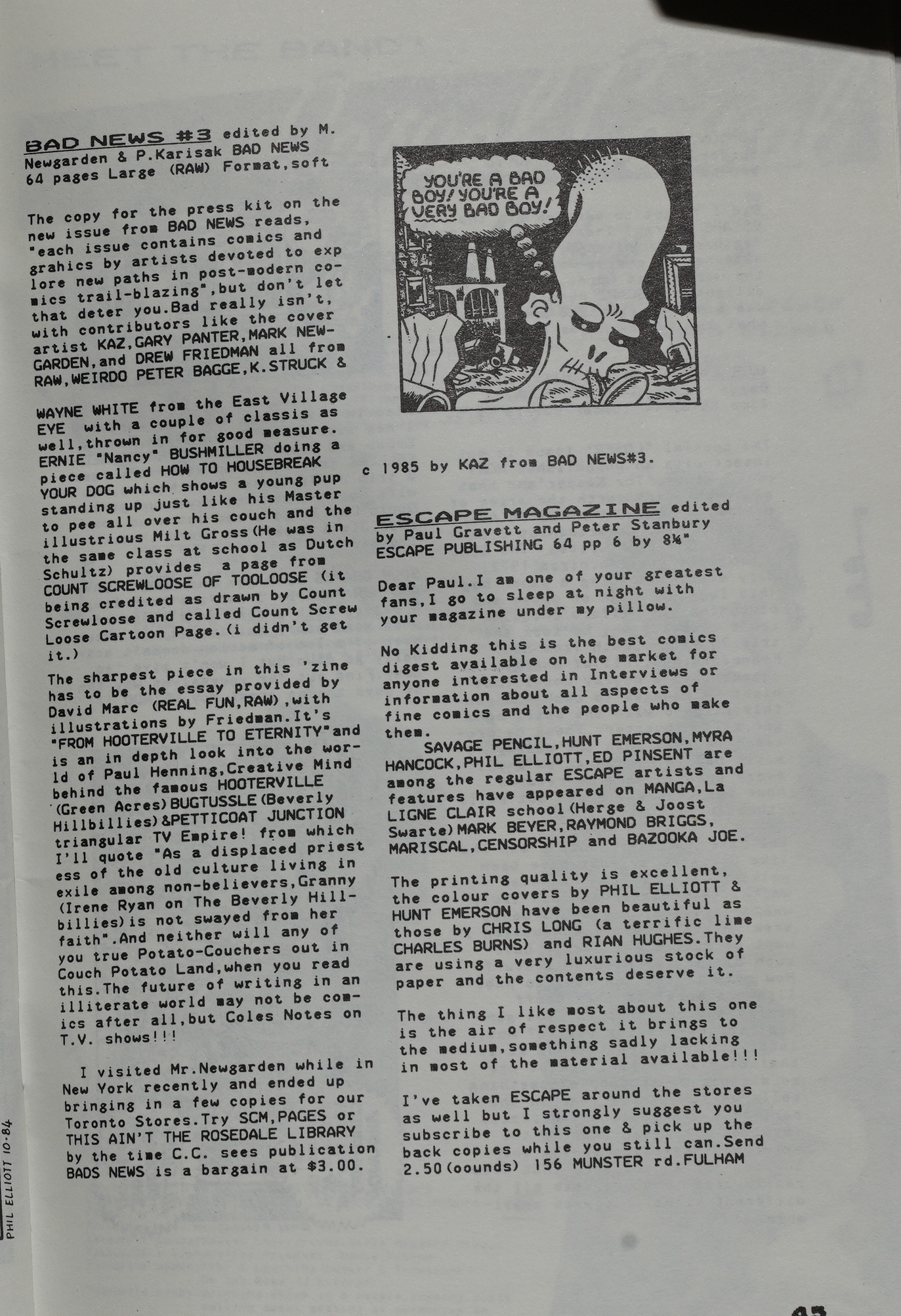 … and then Dako reviews Newgarden’s Bad News #3, and is apparently also selling it around Toronto? Very… er… intimate? It’s fun.

I’m not sure whether that review is supposed to be a joke, though — most of the things he describes wasn’t actually in Bad News #3, was it? 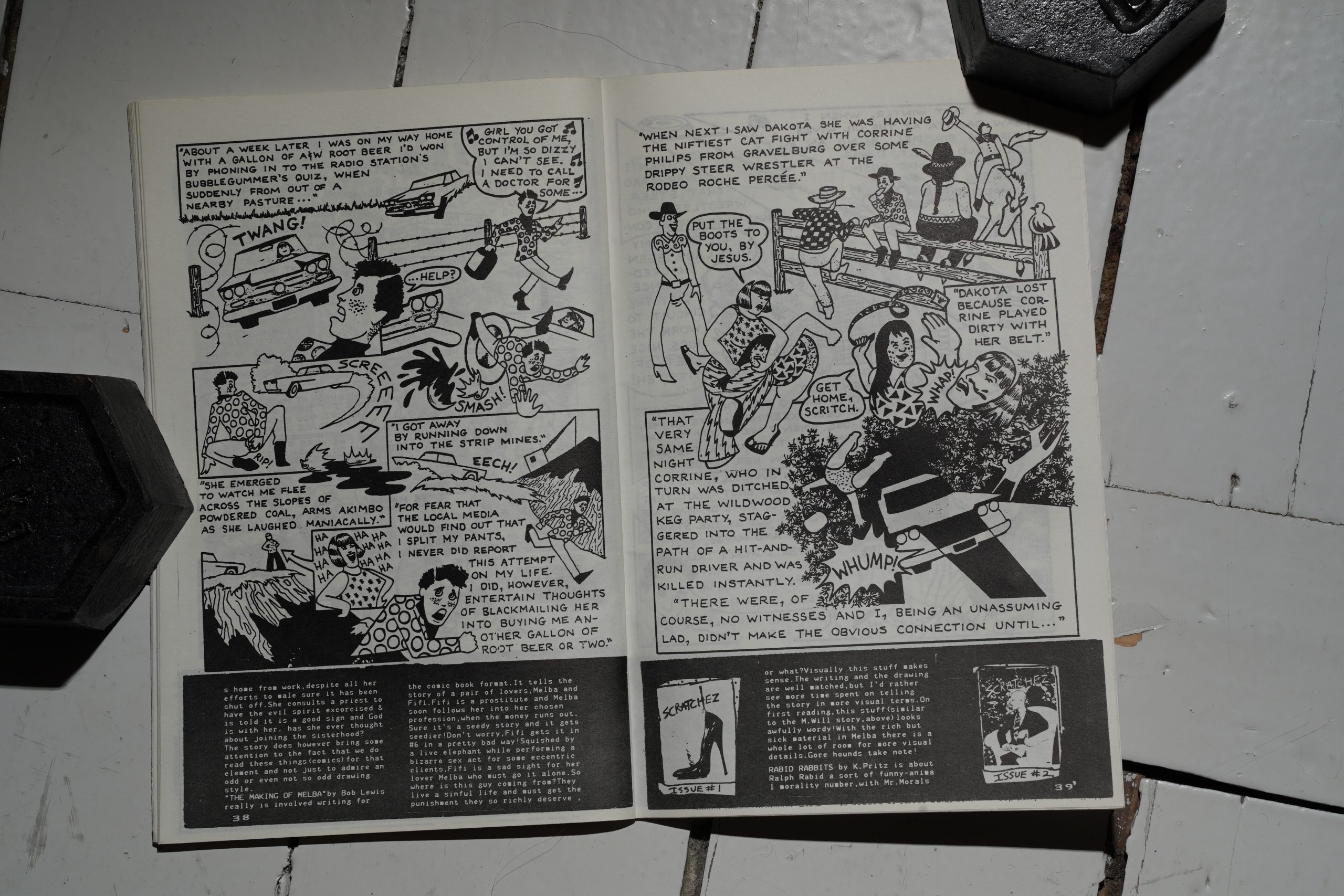 Dako really crams stuff in here. There’s room under this strip, so he puts in more reviews? Well, it’s an aesthetic. 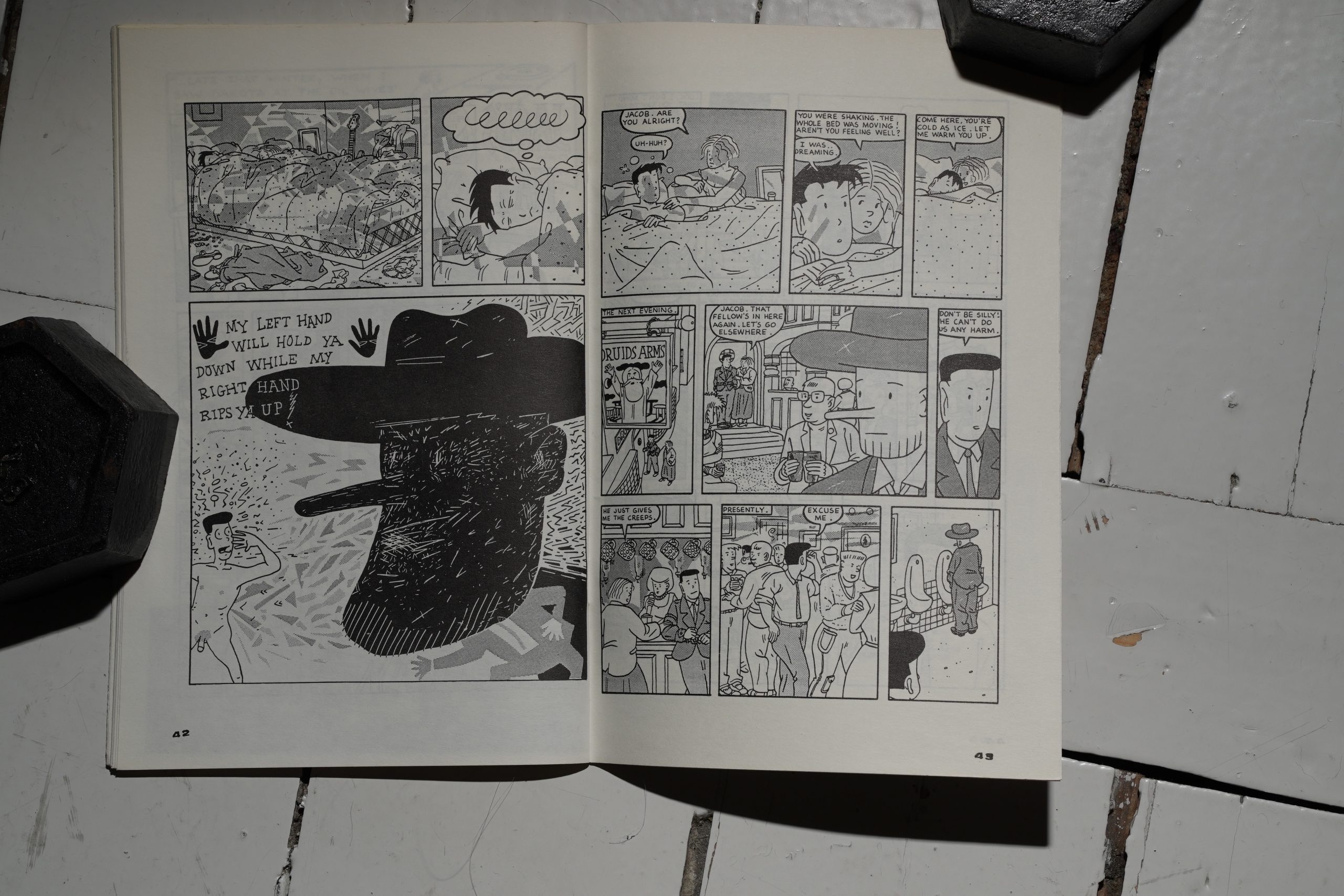 Almost all the artists appearing in Casual Casual are from Canada, but Phil Elliott also appears in all three of these issues. 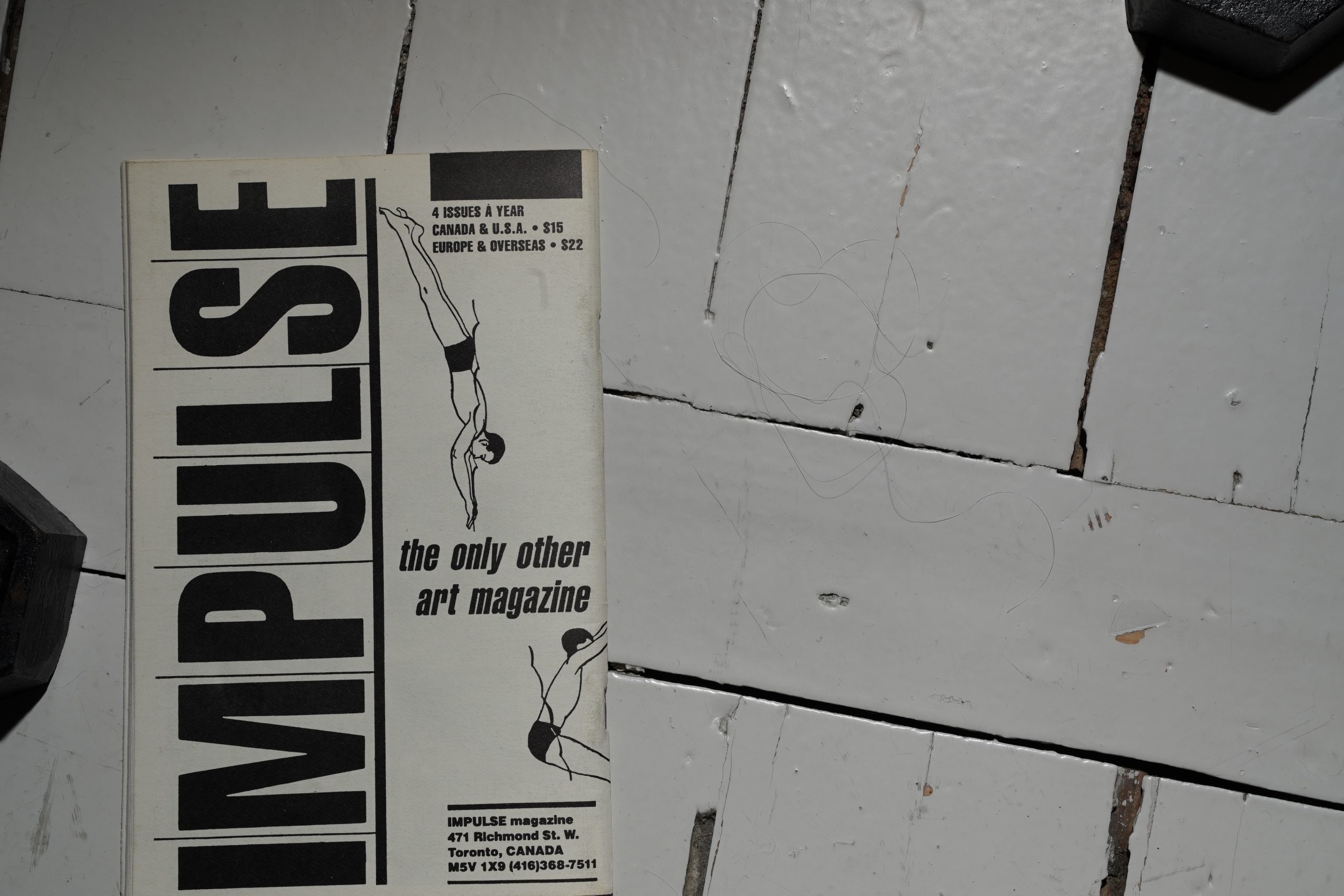 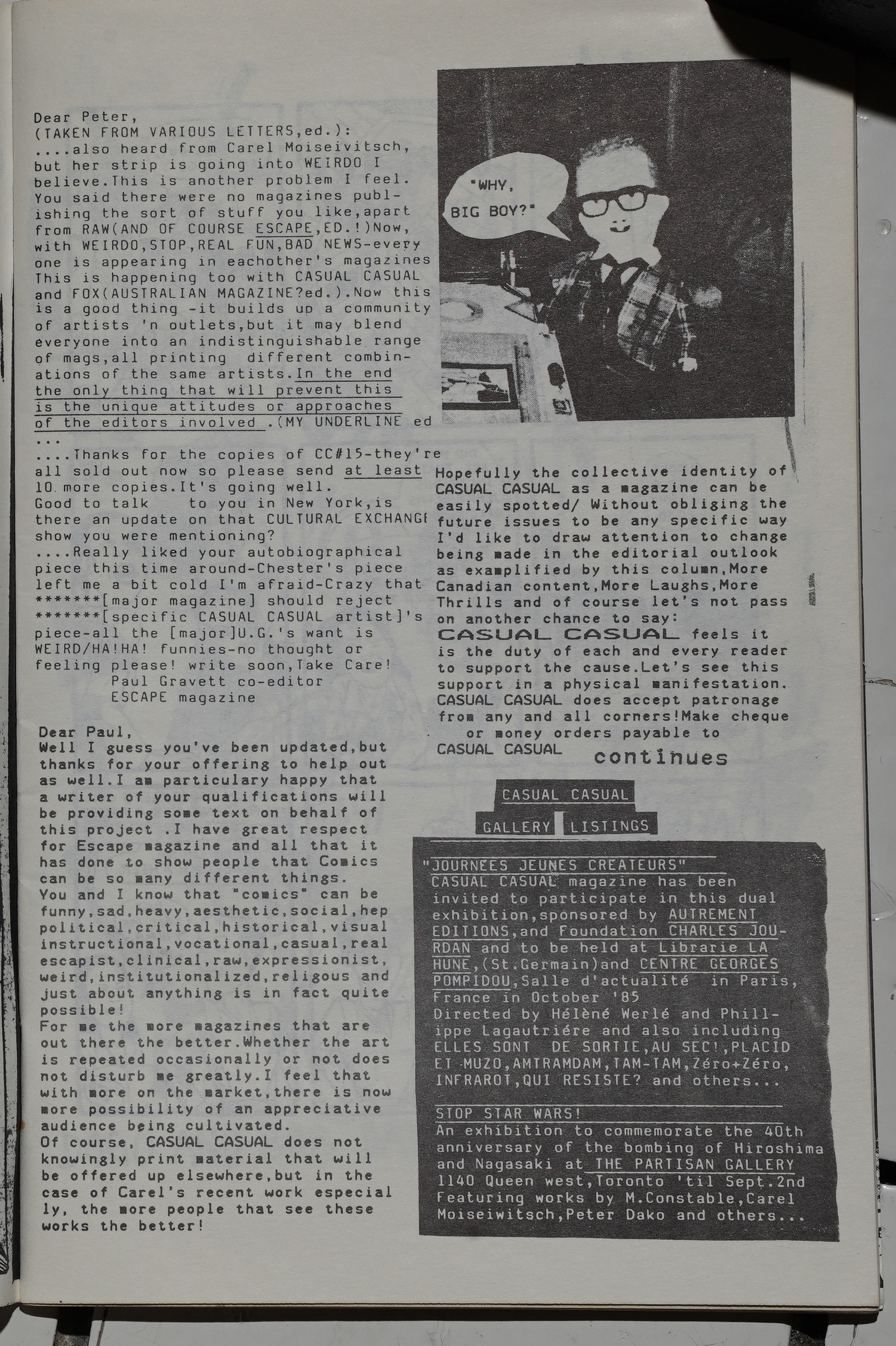 Paul Gravett is complaining that there’s too many art comics anthologies out there now… Hm… Stop? Real Fun? I haven’t heard of them? Oh my god; both have names that are impossible to google for…

It must be this? “Stop – The Comedy Magazine – Number Seven – No. # 7 – Summer 1983 Bagge, Peter (editor) (Comics) (Periodical)” Huh! Sounds interesting. But more like an underground zine than anything else… Here’s a bit more.

And this is Real Fun. Looks interesting. 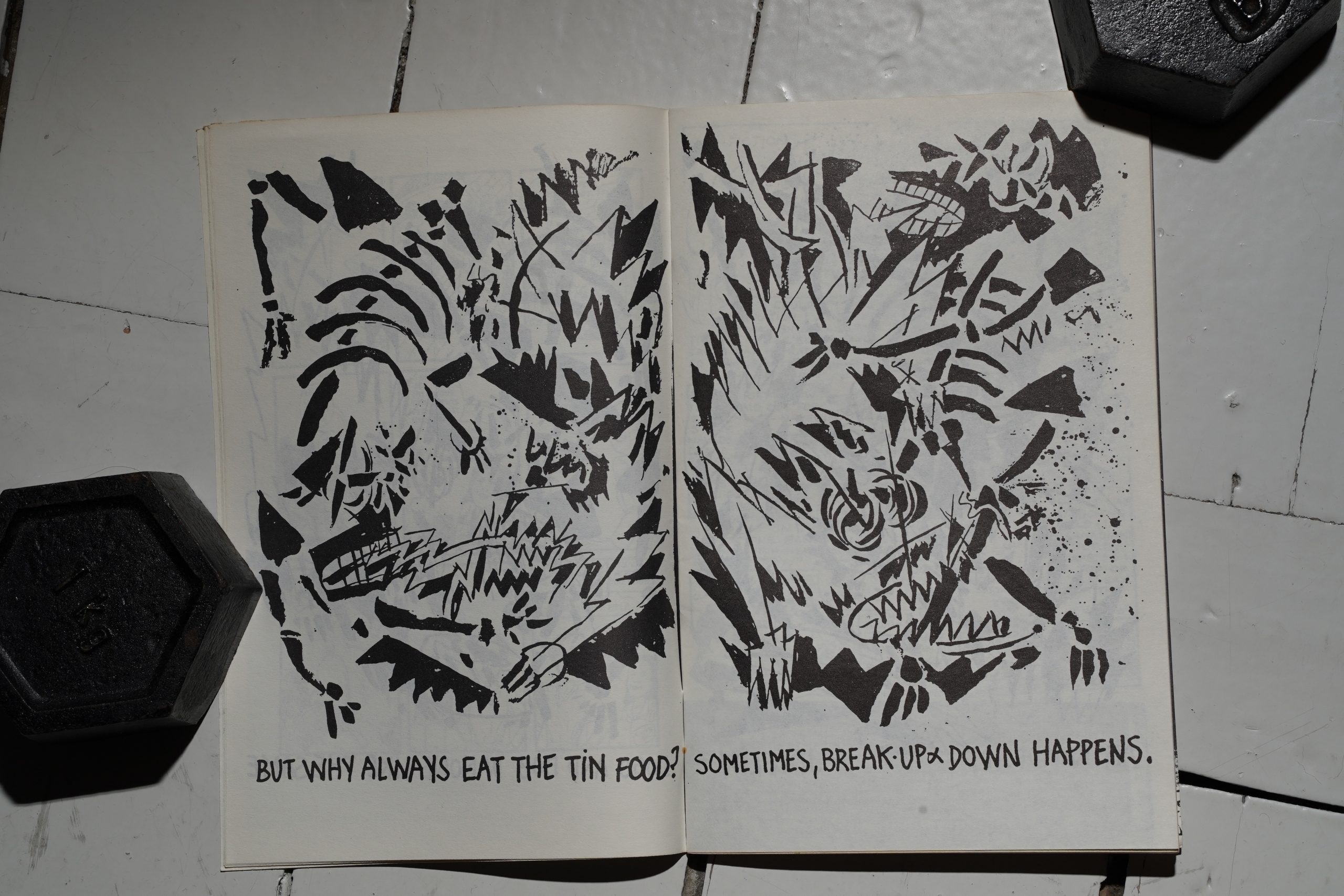 Jocelin does some of the most graphically interesting stuff in here.

Dako wasn’t impressed with the section on Japan and Japanese comics in Raw #7 (and neither was I — the paternalistic “look at those weirdos” tone was really grating). Dako notes the use of “nippin'” and “slanted” that I missed, and stopped his subscription to Raw. 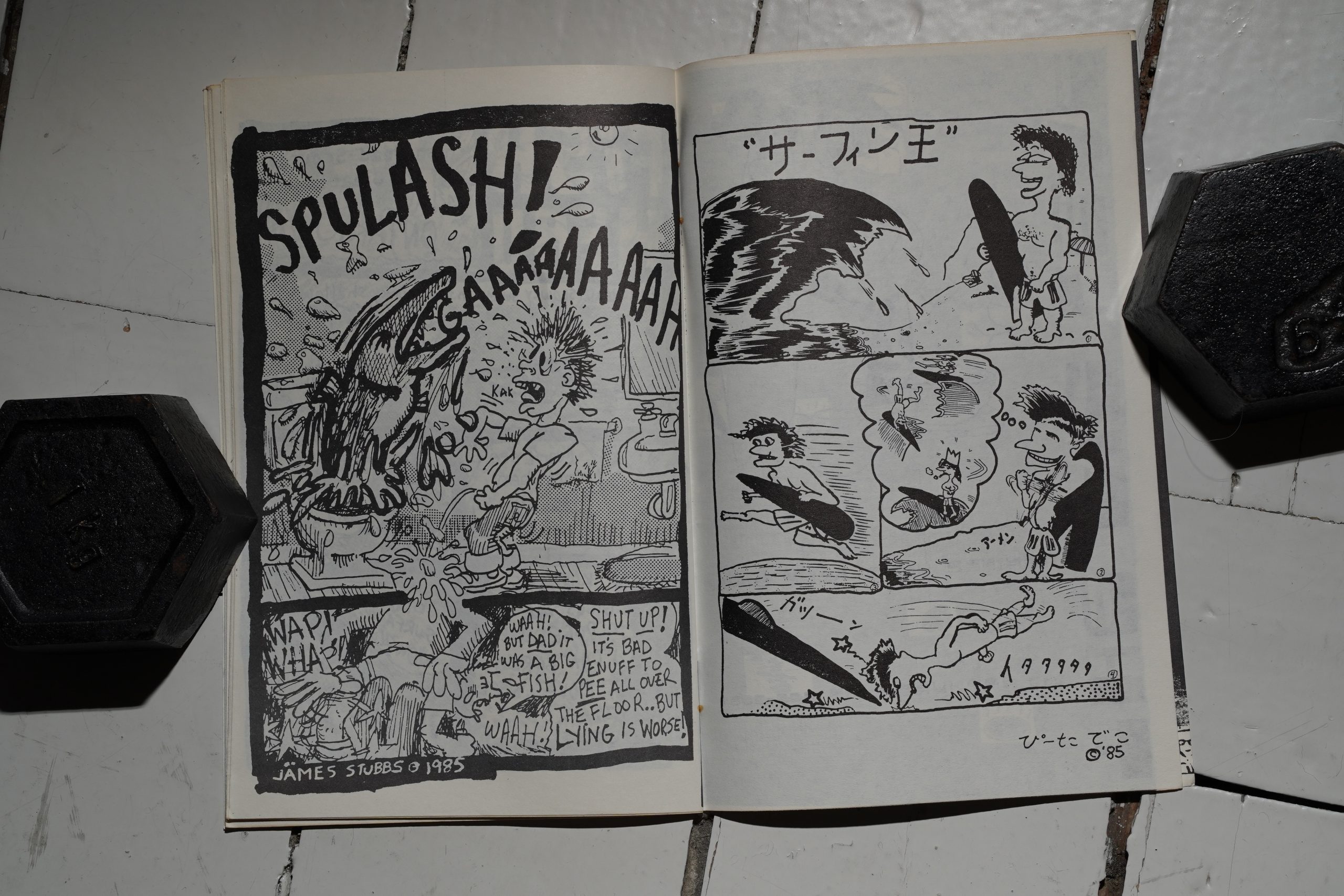 A lot of the stuff here just isn’t that inspiring? 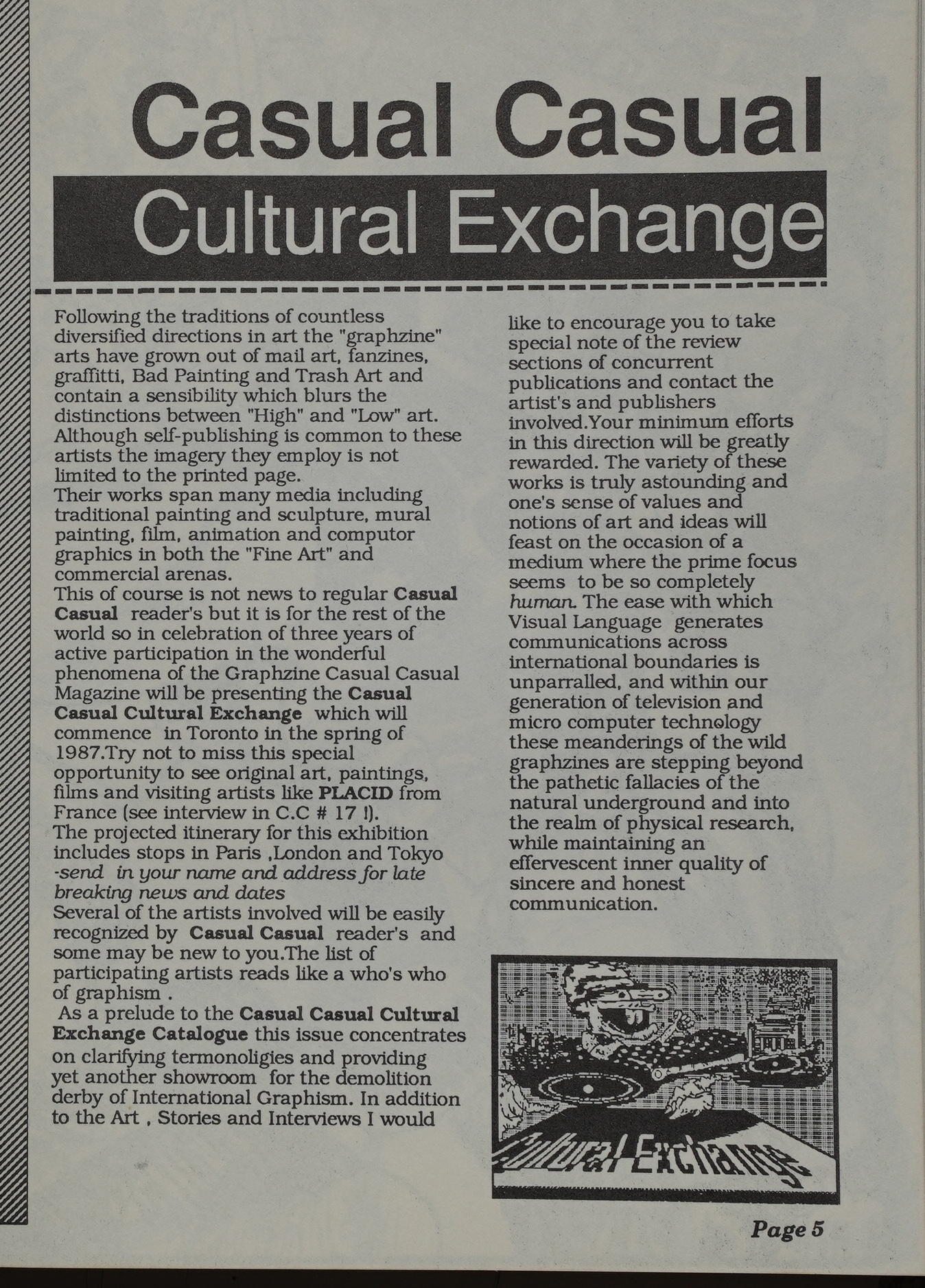 The final issue I have here looks a lot better: He’s gotten a higher resolution laser printer, so the text is legible. It’s also much longer, and has a cardboard stock cover (in colour!). He’s also finally putting on the Casual Casual Cultural Exchange show, which is apparently a travelling art show featuring a bunch of comics artists? 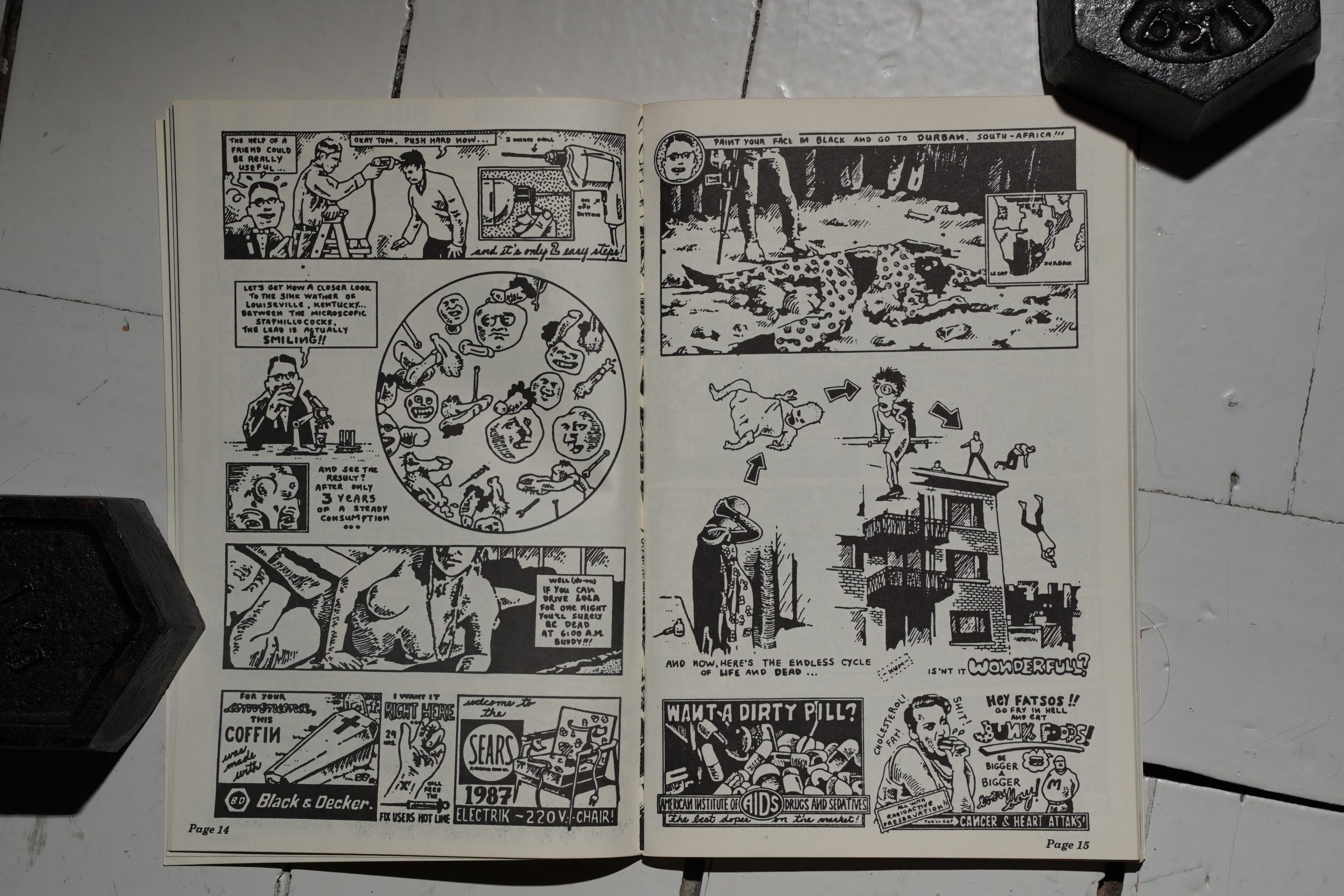 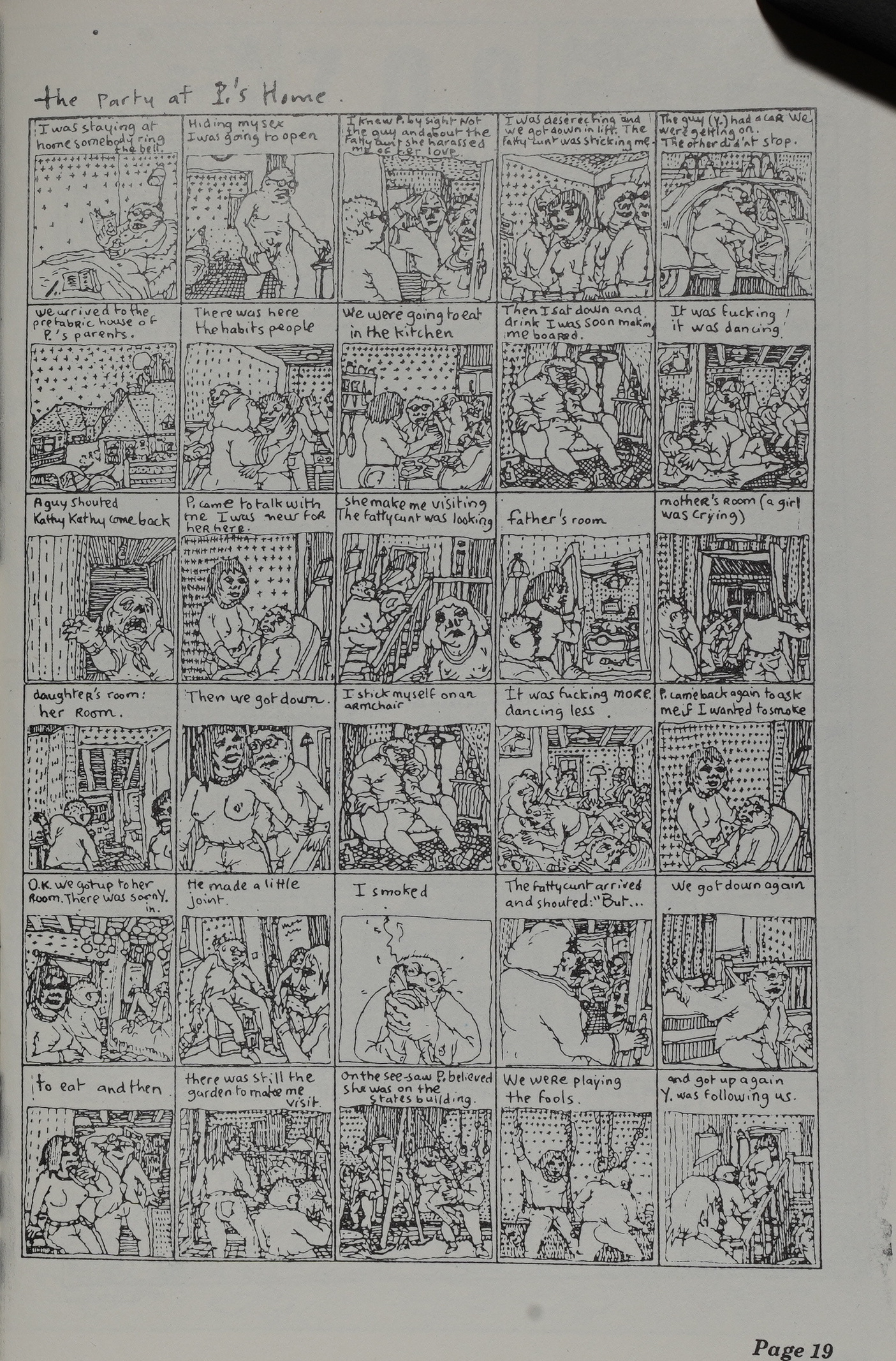 Bruno Richard! But it’s printed so small (and badly printed to boot) that it’s rather illegible? 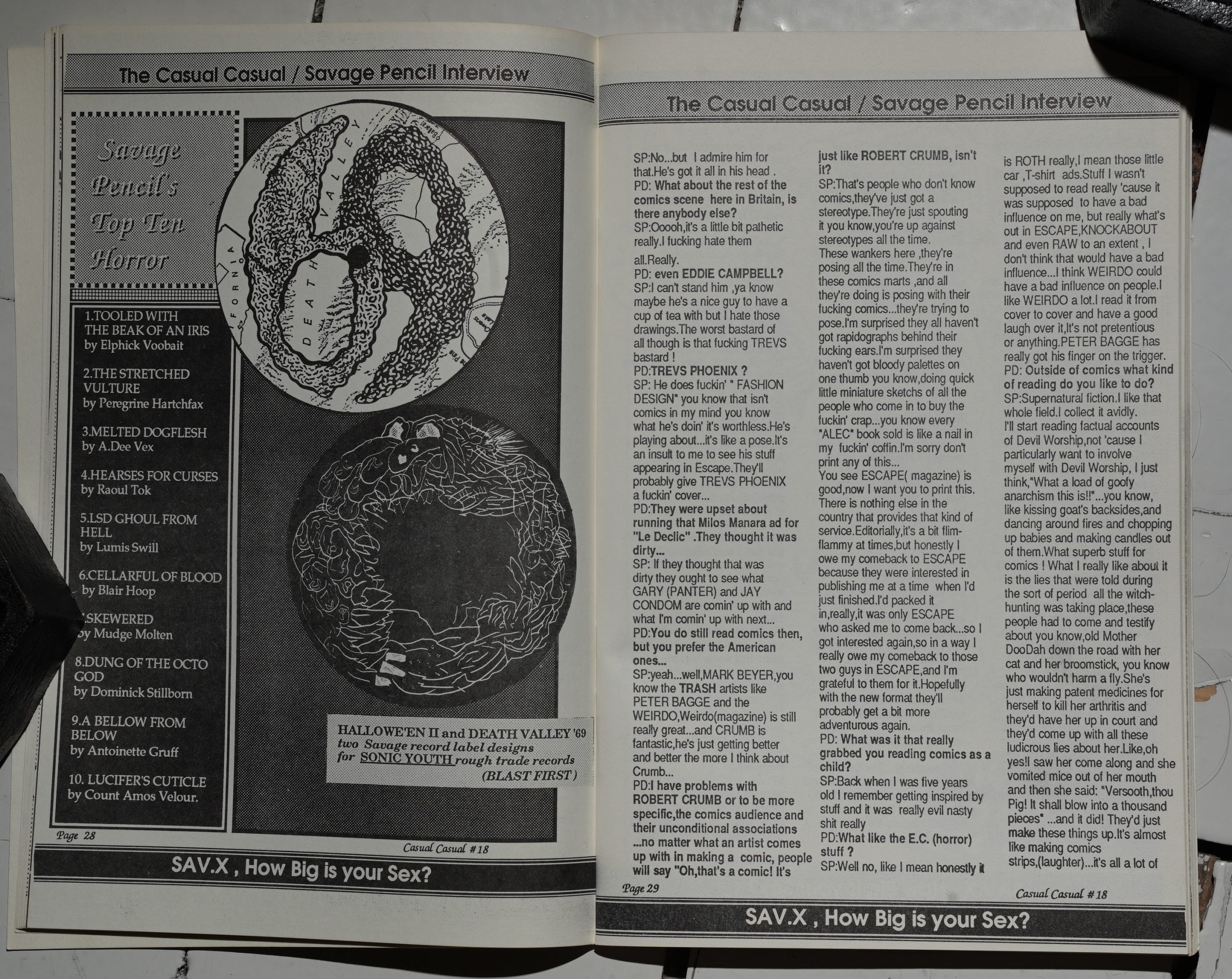 This issue also has two interviews. The first is with Savage Pencil, and he expresses his dislike of Eddie Campbell and Trevs Phoenix: “He does fucking FASHION DESIGN you know?” And: “… you know every fucking ALEC book is like a nail in my fuckin’ coffin. I’m sorry don’t print any of this…” Caro! Well, the level of contributors in this issue has certainly gone up, but none of them are really delivering their best work? Which isn’t surprising. I mean, it’s a zine. So here we have Caro futzing around on his Mac, I’m guessing. 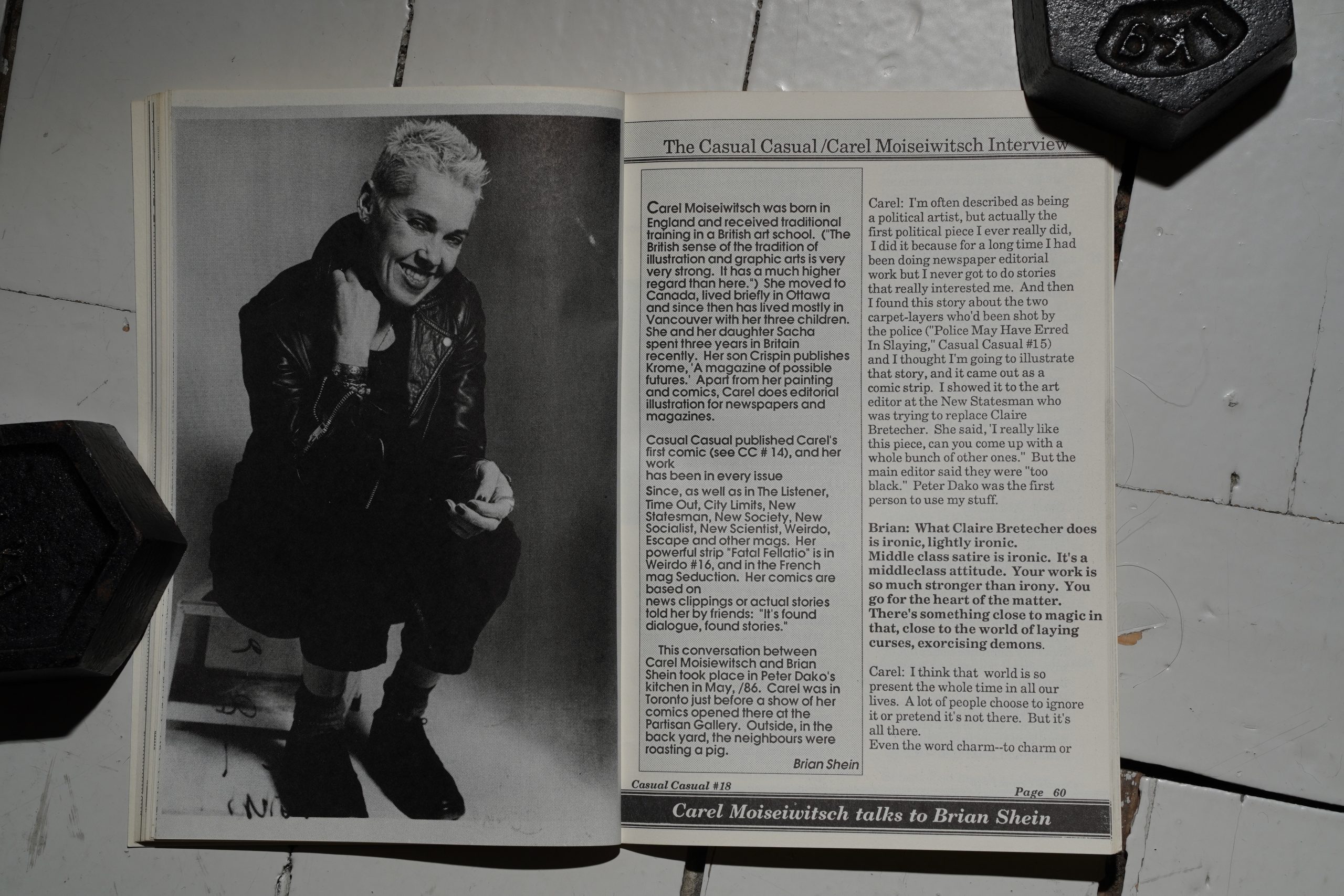 We also get an interesting interview with Carel Moiseiwitch.

And a pretty spot on review of Invasion of the Elvis Zombies. And finally — Dako himself is futzing around on his Mac.

Toronto’s Peter Dako edits Casual Casual
Comics, a quarterly collection of newave
comix from diverse Canadian contribu•
tors. The material is pretty wild, much Of it
playfully iconoclastic and determinedly
unorthodox. Writing and art are Often
boldly off-theÄ.vall. The most recent issue
(#11) features material ranging from the
relative conventionality of Ed Hore’s
“Snapp Jack Jones” strip (a young loser
messes up a job interview) and Barbara
Klunder’s parody, “Grim Fairy Tales” (a
poor fisherman is granted his Wish by a
talking fish), to Ursula Pflug’s expres-
sionistic use Of photo-collage narrative to
recount a “trip to the future in Tokyo” and
Julie Voyce’s neo;scribble story, “Young
Lizzie Biscuit Faces the UnknOwn,'” the sar:
donic account of a young girl’s moving into
a new studio apartment. There are also
unusual and inventive comix from Sean
Leaning, John Colapinto, and
Dai Skuse. Editor Dako contributes the
“Big Boy” strip, a kind of dada satire featur-
ing the nerdish title character,’ a guy who
equates ‘getting back to nature’ with
granola bars, meandering his way through
life. It’s 1984, and “Big Boy,” almost 20
years behind the times, is looking for the
“nearest peace festival.” He seems to be a
passive Canadian nephew to Bill Griffith’s
Zippy. A letter,from American newave art-
ist Jim Ryan in 1 describes Casual Casual
Comics as “honest, intense, tough, untam-
ed. They don’t conform to anyone’s expgc-
tations .but their own. Unique art, strong
concepts. These are sham little comix.”
Dako’s reply: “Dear Jim, thanks for laying
out our editorial policy for potential con-
tributors.” Especially in its Current identity
as an anthology , Casual Casual Comics is
lively, alert, and fun.
Dako originated Casual Casual Comics in
September 1983 as an offshoot of his work
With his Toronto ‘New Wave’ bands,
Casual Casual. The earliest issues, which
showcase only Dako’s work, feature
references to the band and the Toronto
night club scene in which it operates.
Dako’s approach to cartooning might be
described as good-natured punk, often
featuring broad satire Of pop culture
banality. In addition to the “Big Boy”
stories, one prominent piece is “Potato
Lust” (Casual Casual the story ofa man
Who develops a protective fetish involving
potatoes and, in the final page of the story,
is transformed into one. For Dako, this is
clearly a comic metaphor for the loboto-
mizing effects of the modern world.
(“Potato Lust” has been selected to appear
in Rampike, an international literary maga-
zine.) Dako’s “Art Bar” strip runs in
Shades, a New Wave music review. He also
has a strip entitled “2084,” Aéhich appears
in Energy Alert, a magazine dealing with
energy issues published’ by the Ontario
government and distributed to every
school in the country.
Toronto’s Grunwald Gallery sponsored
a show of comic art entitled “Kroma-
laffing” last February. an addition to ex-
hibiting Dako’s work, the show featured
work by Canadian cartoonists and comix
artists David Boswell (Reid Fleming, Heart
Break Comics), Chester Brown (Yummy Fur,
Comics), and Kat Cruickshank (No Name
Comix), as well as work by Barbara Klundgr
and Andy Patton. Most characteristic of
all this work is a brash desire to break out
Of conventional form and explore new
gx)ssibilities in comics and humor, often in
a blunt, punk-influencd style.

Like Topsy, each new issue Of peter Daws
Toronto-based Casual Casual Comix, now
published on a quarterly schedule, seems to
get bigger (80 pages in the latest issue, ’17
includes a 17•page “Big Boy” story, the
longest piece of slapstick nonsense-satire by
Dako that has yet appeared in Casual
Casual. Much of the work is bizarre, outre,
and self-indulgent by conventional stan-
dards—hey, remember those?—but there’s
always an odd balance between
revolutionary idealism and nihilism in
Casual Casual. (With each new issue, you
find yourself pondering, “When will this
magazine self-destruct?”) Dako has created
a viable forum for serious cornix artists lmk•
ing for new ways to use the medium. Anar•
chistic in tone and spirit, Casual Casual
radiates an energized, cocky assurance that’s
appealing in its own right. Number ’17
features work by Mary Fleener, Carol Moi-
siewitsch (whose strip on Canadian Japa-
nese imprisioned during the war is a real
eye-opener), Placid, and Bruno Richard.

Chester Brows is interviewed in The Comics Journal #135, page 82:

GRAMMEL: Eventually you began doing some mail
order stuff.
BROWN: Yeah. After standing out on the street I
figured, “Well, I’ve got to sell these some way,” so I
went into a whole bunch of stores around town. A lot
of people picked them up that way. Most stores did it
on consignment, but a few bought from me straight. And
we have a lot of bookstores in Toronto. So I don’t know
how many took it, but there were quite a bit. Then this
guy in town, Peter Dako, saw that I was doing Yummy
Fur, so he said, “Well, I can do the same thing,” so
he started putting out his comic book called Casual
Casual. And this other guy who’d been self-publishing
his comics, Michael Merrill, a Toronto artist, he got in
touch with us. And we all got together and Michael had
a bunch Of these mini-comics that he’d got from Am Saba.
GRAMMEL: Is he in Toronto?
BROWN: Arn Saba? Yeah. So Peter and I went over
to Michael ‘ s one time and there were these mini-comics
all on this table. He’d brought them all out. And it was
amazing. “You mean there’s a whole bunch Of people
doing this?” And most of them are awful, but it was
amazing to me that Other people were doing it. so I got
in touch with some of the Imple in some of the nuni-
comics, and started getting into the network this way.
And there were these fanzines devoted entirely to mini-
comics and so I’d advertise in there. It got quite a bit
of response. it was actually about 50/50: 50 selling to
the stores around Toronto and 50 by mail. Something
like that.