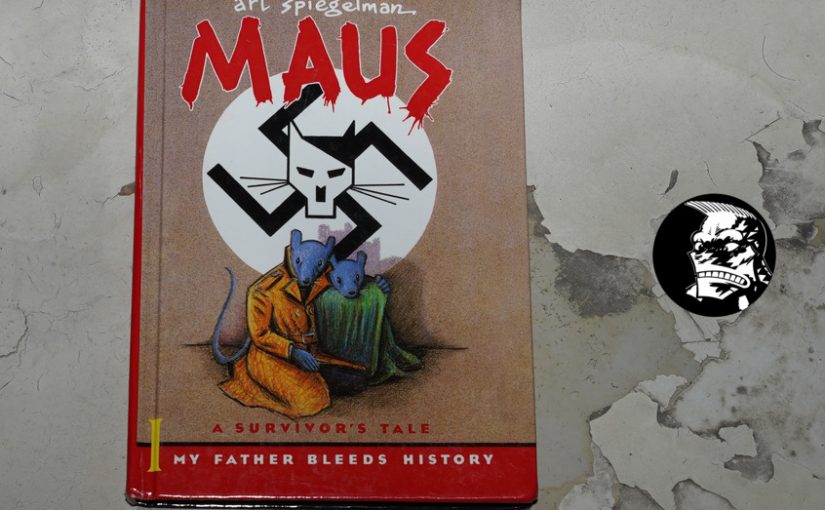 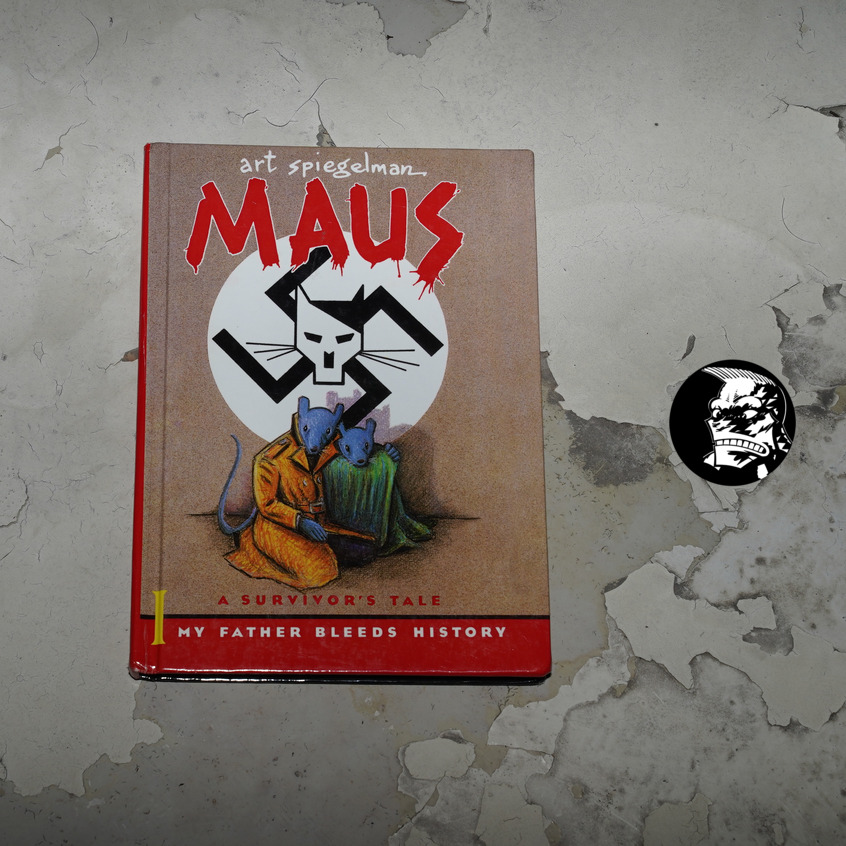 Maus I: My Father Bleeds History by Art Spiegelman (mm)

This is it: The pivot point in this blog series. You may not have thought so (if you’ve been reading a few of these blog posts), but there’s a kind of loose structure going on here. I wanted to divide the series into a “before” and an “after” part, and Maus I is where things change. (That I’m buying more stuff from ebay confuses the picture even more, so er sorry?)

Anyway! This is the most important single comic book in the history of comic books.

I don’t mean that as an aesthetic judgement or anything, but just an impartial observation.

This is when art comics went from being a punk, underground thing to being something that normal, well-adjusted, educated and/or rich people would buy (and read). In principle.

I remember visiting a couple in Manhattan a few years ago that owned an entire house on the lower east side — it was totally gorgeous; smart and interesting people. And in their bookcase, filled with Pulitzer prize novels (think Philip Roth and John Updike) and art books, there were the two red spines of Maus I & II, and absolutely no other comics: Among a certain class of people, these are still the only two comic books that are worth reading.

Maus I led to all the major publishers, all over the world, going “there’s a market here”, and for a couple of years, they all published “comics for adults”… and nothing else sold to a general audience other than Maus, and they all shut down that thing fast.

But, I think, it made the world aware that reading a comic was, like, possible, and I don’t think the post-2006 comics history would have been possible without Maus I opening some doors. These days, the New York Review are publishing comics, and The Paris Review are interviewing comics creators.

I didn’t actually own this book back in the 80s: I had read the booklets included in Raw, and I got a collected edition decades later, so this is the first time I’m reading the Actual Book. 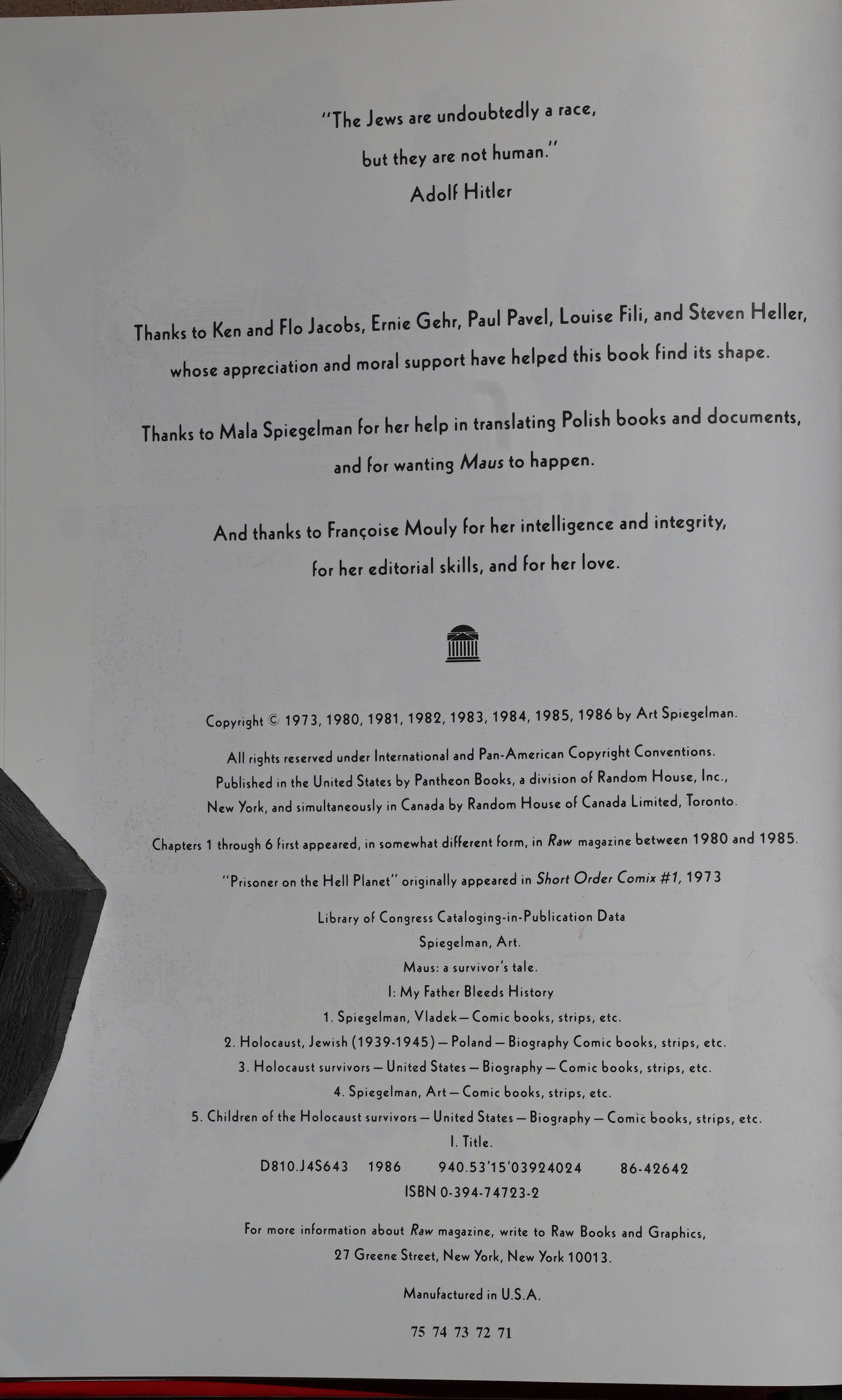 This turns out to not actually be The Actual Book — this is (re)bound by Turtleback Books, and was published after Maus II had been published… so… sometimes in the mid-90s? Darn those ebay peeps.

And does that line of 75 … 71 mean what it usually does? That this is the 71st printing of Maus I? It sounds in-credible, but… I tried googling how many copies of this has been published (by Pantheon), but I’m unable to find any numbers. So…

There’s been a buttload of translations, though — that page lists more than a 100 different editions. 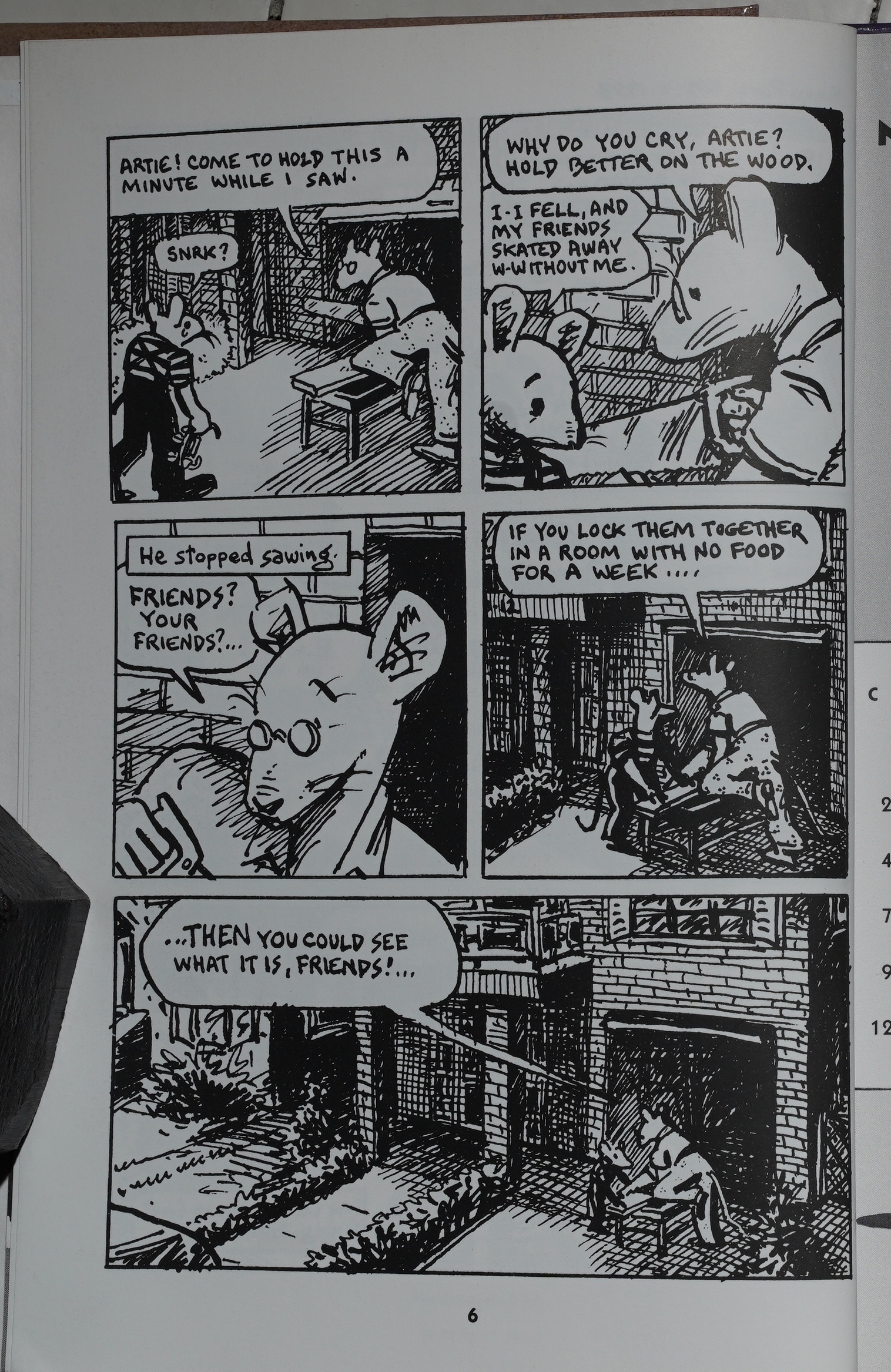 The first few chapters here have been redrawn from the original booklets in Raw, making the artwork more consistent. 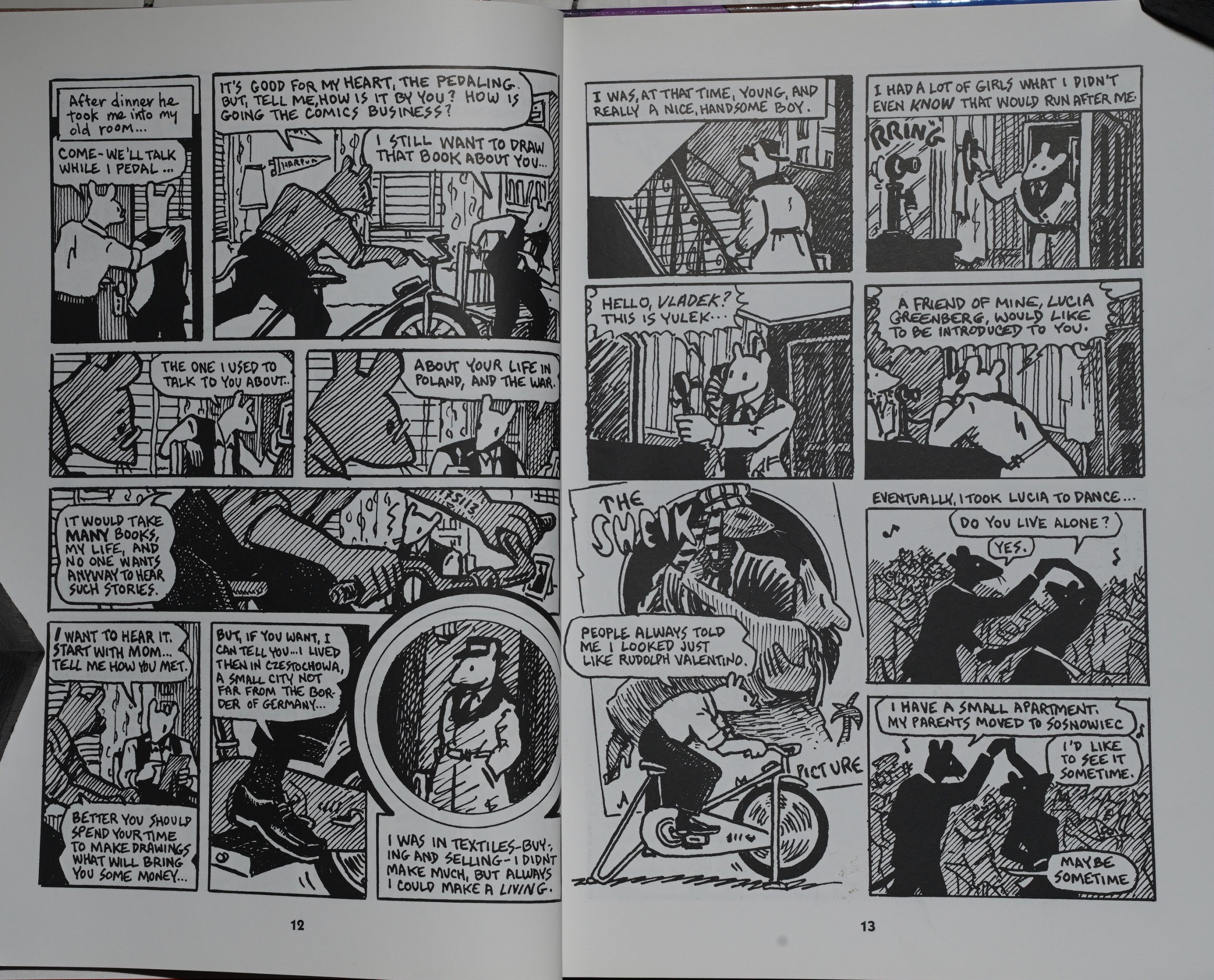 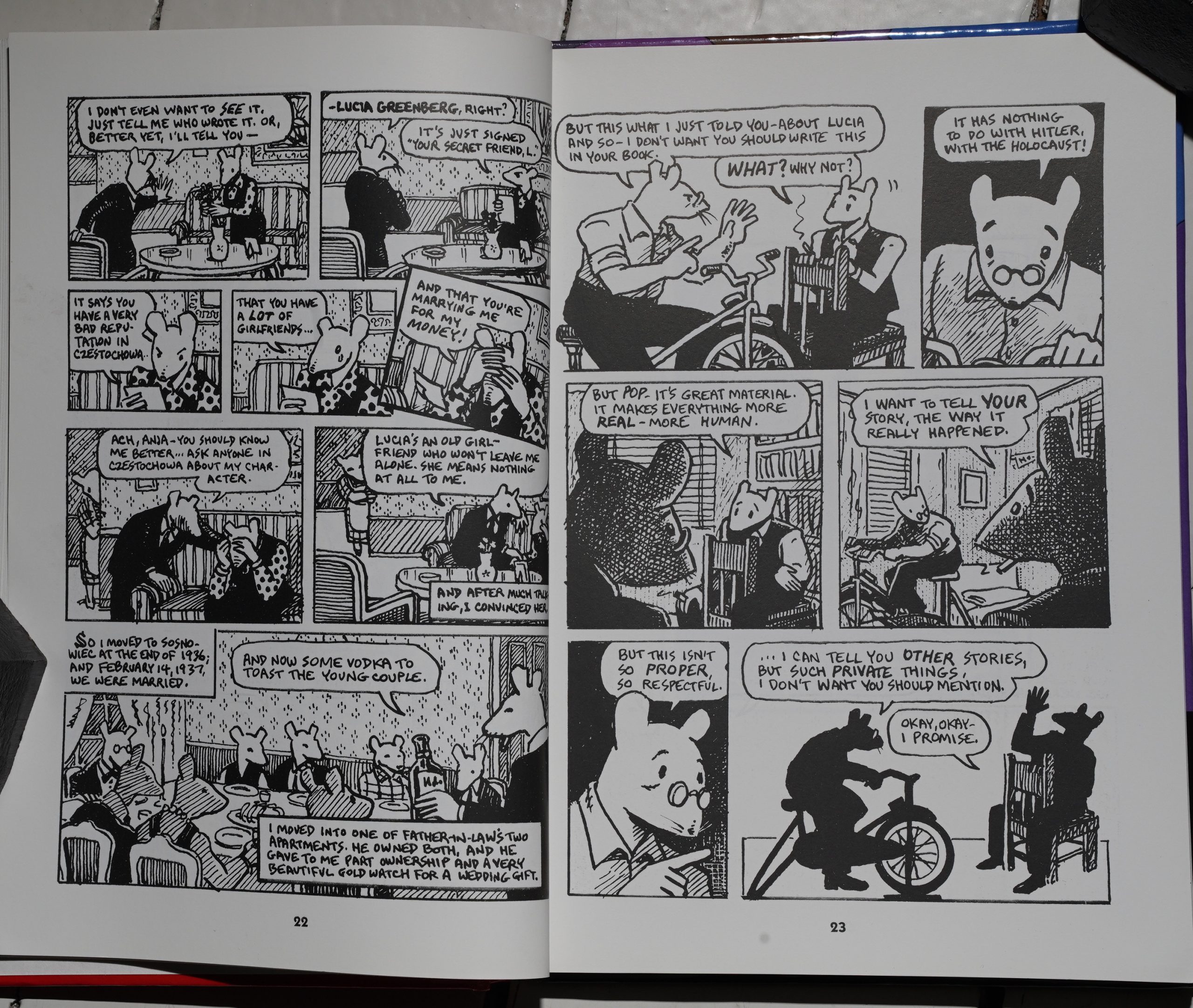 You may find this mixture of telling the reader about the making of the book they’re reading kinda cutesy? I think it works brilliantly — it’s not just a gag; it gives us some breathing space between the pages of heartbreak from Vladek’s story. 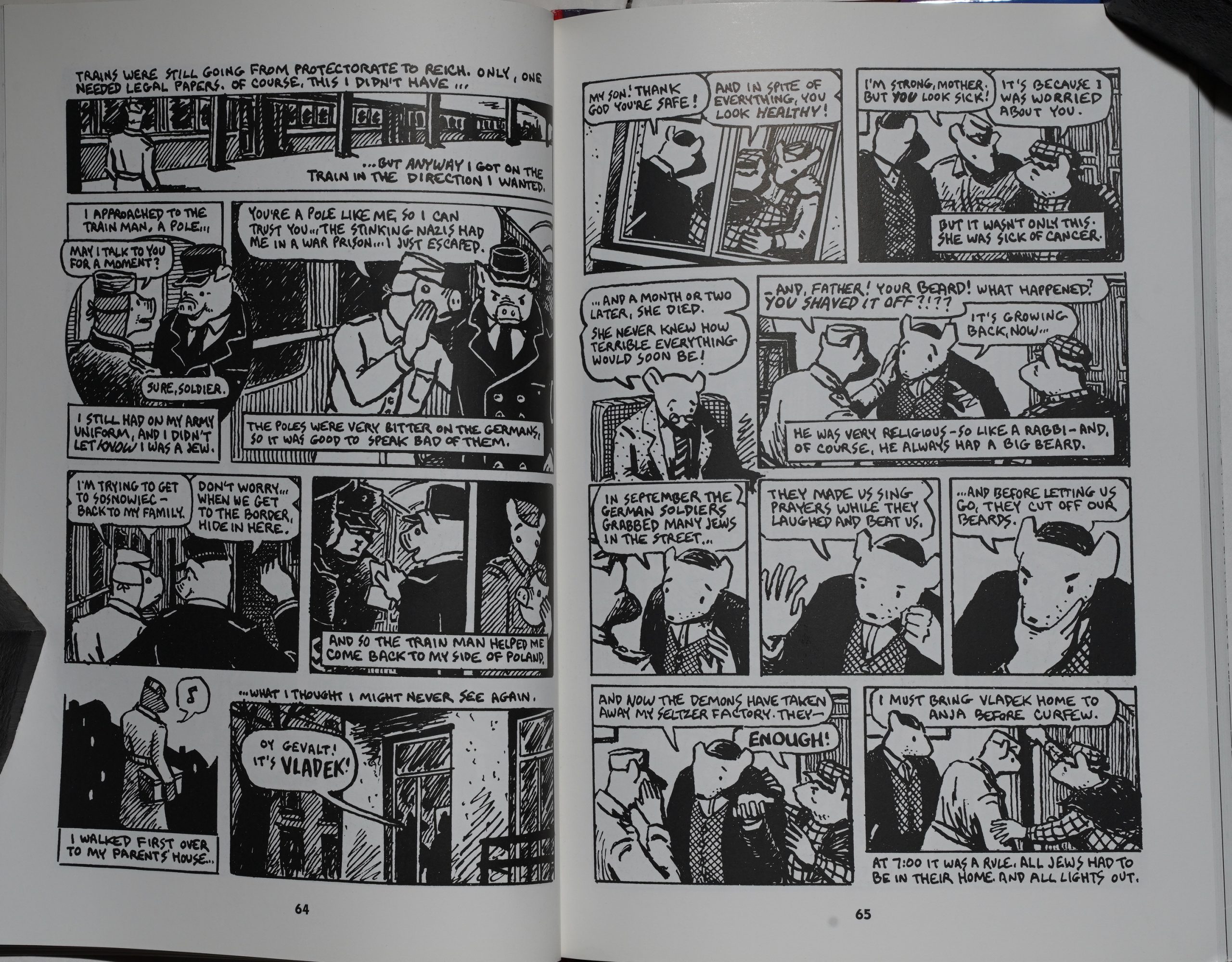 His incredible daring and intelligence… 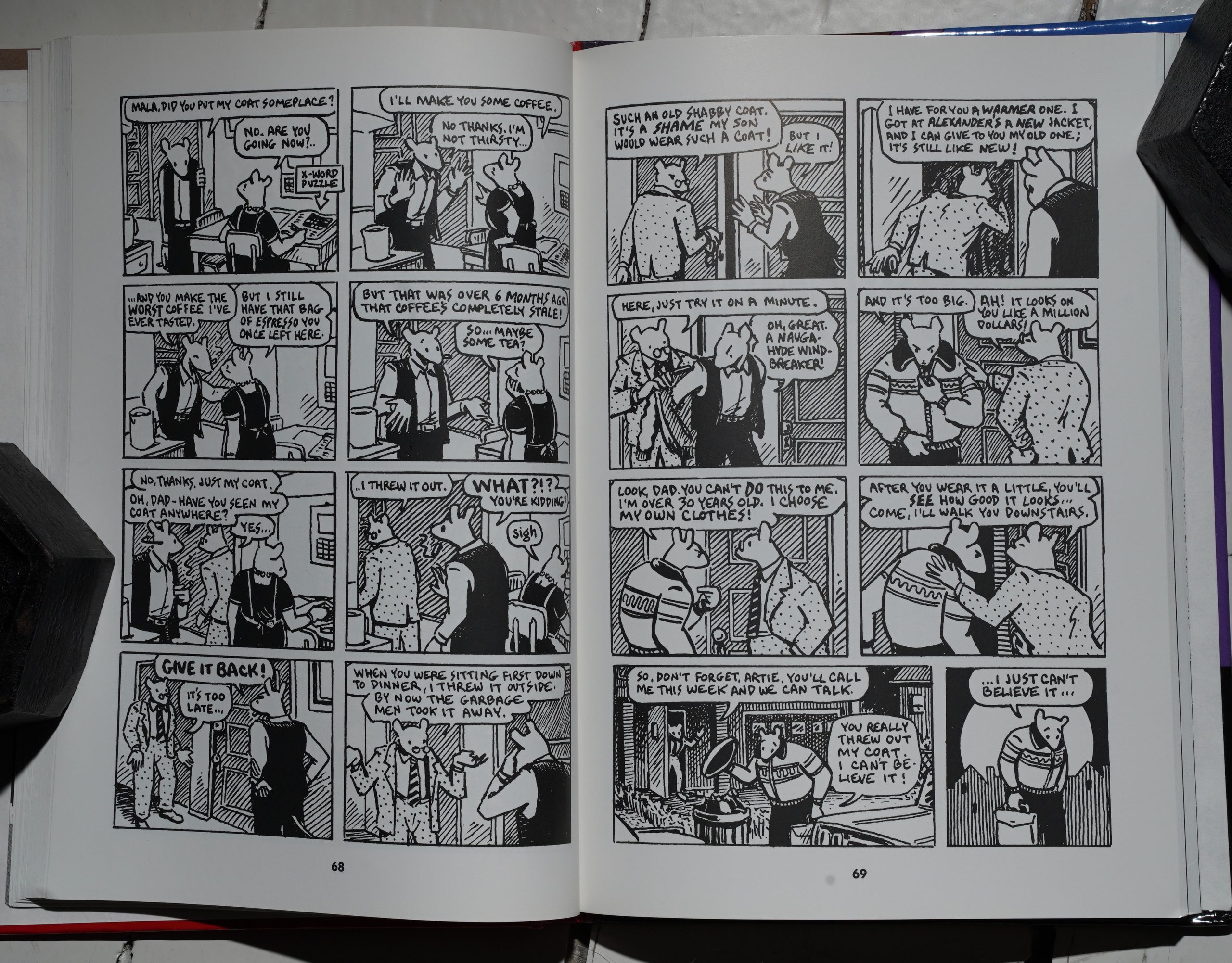 … and at the same time being the most exasperating parent ever.

But you’ve all read Maus, so I’m not going to natter on about it. And I’ve read this already once over the previous months in serialised form, and I was wondering how it read in book form… You read some serialised works and it’s WOW and then it’s collected and it’s “eh?” Loses some of the magic in book form?

That’s not the case with Maus. It was really flabbergasting reading it as inserts in Raw, and it’s still a punch to the stomach to read it in book form.

I love reading take-downs of books that I love, so let’s look at the only negative article I can remember seeing about Maus, and this is from 1986. Harvey Pekar writes in The Comics Journal #113, page 54:

Spiegelman diminishes his book’s inten-
sity and immediacy by representing humans
as rather simply and inexpressively drawn
animals—Jews as mice, Germans as cats,
Poles as However, the animal metaphor
is ineffective because this single element of
fantasy is contradicted by Spiegelman’s
detailed realism. For instance, he uses the
real names Of people and places; i.e., a mouse
named Vladek Spiegelman lives in the
Polish town of Sosnowiec, wears human
clothing, and walks on two feet.
The animal metaphor also perpetuates
ethnic stereotypes. Spiegelman generally
portrays Jews as prey (mice) for the Germans
(cats). However, he shows some Poles tak-
ing risks for Jews, yet insultingly pictures all
of them as pigs.
Art’s narrative sometimes rambles and
bous down, partly because he is preoccupied
with making Vladek look bad. Using a sub-
plot involving contemporary sequences is
good idea, but in them Art denounces his
father as a petty cheapskate and tyrant far
more Often and predictably than is neces-
sary. This distracts attention from the Holo-
caust story, clamorously interfering with the
elevated tone of Vladek’s reminiscences.
One might think Spiegelman dwells on
his father’s faults to illustrate the terrible
mark the Holocaust left on people. How
ever, he quotes Mala, who also ‘ ‘went
through the camps” as saying that no Holo-
caust survivor she kne.v was a heartless
miser like Vladek. A complex person With
contradictory characteristics, Vladek isn’t
portrayed clearly in Maus, but perhaps the
next volume will allow us to understand
him better.
Spiegelman’s prose is sometimes stiff, but
this problem is largely overcome by the rich
material he presents. He does not attempt
to sensationalize information already so evo-
cative, but lets his father speak of his
Holocaust experiences simply and With dig-
niry, creating a work historically significant
and often moving.

I hold to the opinion that Maus is overall
good and a significant work, primarily,
because of Vladek Spiegelman’s moving and
informative narrative. That seems obvious.
It seems equally obvious to me that Art
Spiegelman has done some things in Maus
that are less than admirable, and I have
heard some criticism of the book expressed
privately but for some reason people seem
reluctant to go on record in print about its
defects. Perhaps the serious tone of Mates
and its subject matter cows them. Howard
Chaykin, who has a reputation for being
outspoken, seemed on the verge of saying
something “pejorative” about Spiegelman
during a recent Comics Joumal interview but
asked that the tape recorder be turned off
at the crucial moment. A gentile comic
book fan suggested to me that some people
might be reluctant to criticize Maus for fear
of being called anti-Semitic—that’s under-
standable these days when right-wing Jews
accuse left-wing Jews Of being “self•hating
Jews,” their definition of a self-hating Jew
apparently being any Je.v more liberal than
Ariel Sharon.

There was much backlash.

Further into the review, Pekar
says that he feels “that Art delib-
erately tried to make [his fatherl
look bad.” Here, especially, Pekar
presumes too much. First of all,
both father and son are shown to
be alternately compassionate and
reactionary; in other words,
human. Secondly, in reading
Maus, I gave the benefit of the
doubt to both Spiegelman and his
father. insofar as the passages they
share are personal reflections that
can scarcely be considered per-
fectly factual or entirely objective.
I have to doubt that the various
situations between them happened
as depicted. but to expect such
scenes to be anything but subjec-
tive is to miss the point entirely.
Pekar justifies his presumptions
by saying that lots of kids have
problems with their parents, so
what’s the big deal? When citing
a sequence in which Spiegelman’s
father throws out his son’s coat and
gives him one he thinks is better,
Pekar writes,’ “It’s silly for a
35-year-old man to blow up at his
SICK old ratner over an old coat:
It’s equally silly to presume that it
was simply the loss of a coat that
was the basis of Spiegelman’s out-
burst. I would venture to say that
it was more a matter of personal
respect, as well as the likelihood
that Spiegelman and his father
simply did not get along, and that
this was just another in a lifelong
series of mounting frustrations.

Throughout his piece, Mr. Pekar refers to the
character Of Art Spiegelman as if he were One and
the same with Spiegelman the artist. Not only is this
impossible for us to know (as Pekar does admit), it
is completely beside the point! Although Spiegelman
uses his own name, he gives his readers a clue as
to just how closely he is identified with his character:
Spiegelman isn’t a mouse!
Indeed, the quality Mr. Pekar despises is the very
quality that makes the character Of Art, and the rest
of Maus. work. This quality is pettiness. Art, in the
story, is a selfish brat who cares little about what
his father has experienced except that it is useful
in his own work. In the same way, Mala and Vladek
do not try to understand each other and grab what
they can get out of their own lives—just as the Nazis
feared and hated the Jews for being different and ex-
ploited them for what they could supply.

Pekar and R. Fiore went into an endless discussion…

Now that you’ve all had time to digest
Harvey Pekar’s article in Journal #130
— and what a great, big, fiber-laden
chunk it was — it’s as good a time as
any to examine the stool. What it
demonstrates primarily is that, other
accomplishments notwithstanding, Pe-
kar is a lousy critic: slipshod in his
methods, weak on facts, given to shod-
dy reasoning even when he’s correct,
and largely motivated by envy of any-
one in comics he perceives to have a
higher reputation than his.

But what did Fiore really mean? 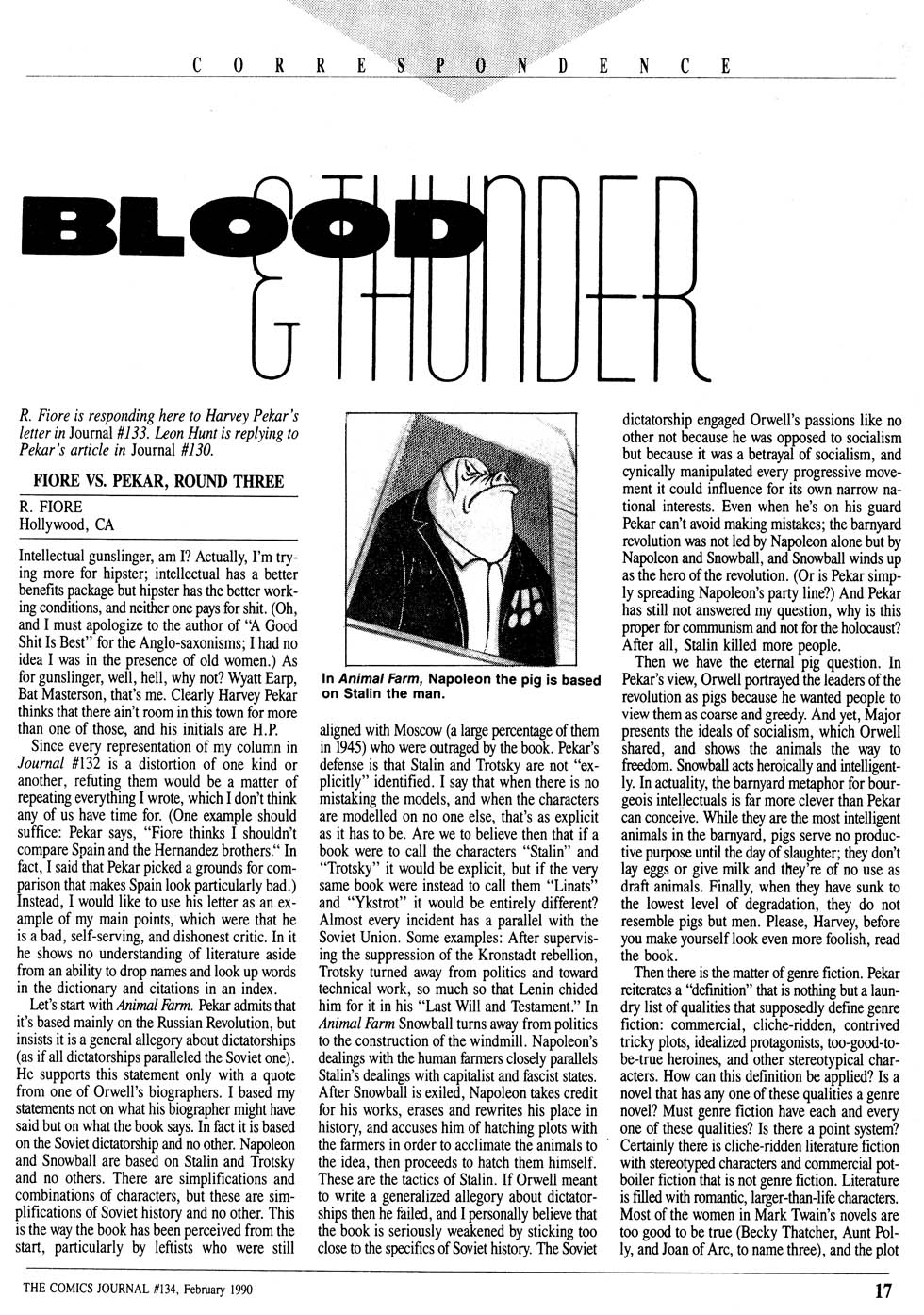 It went on for years. 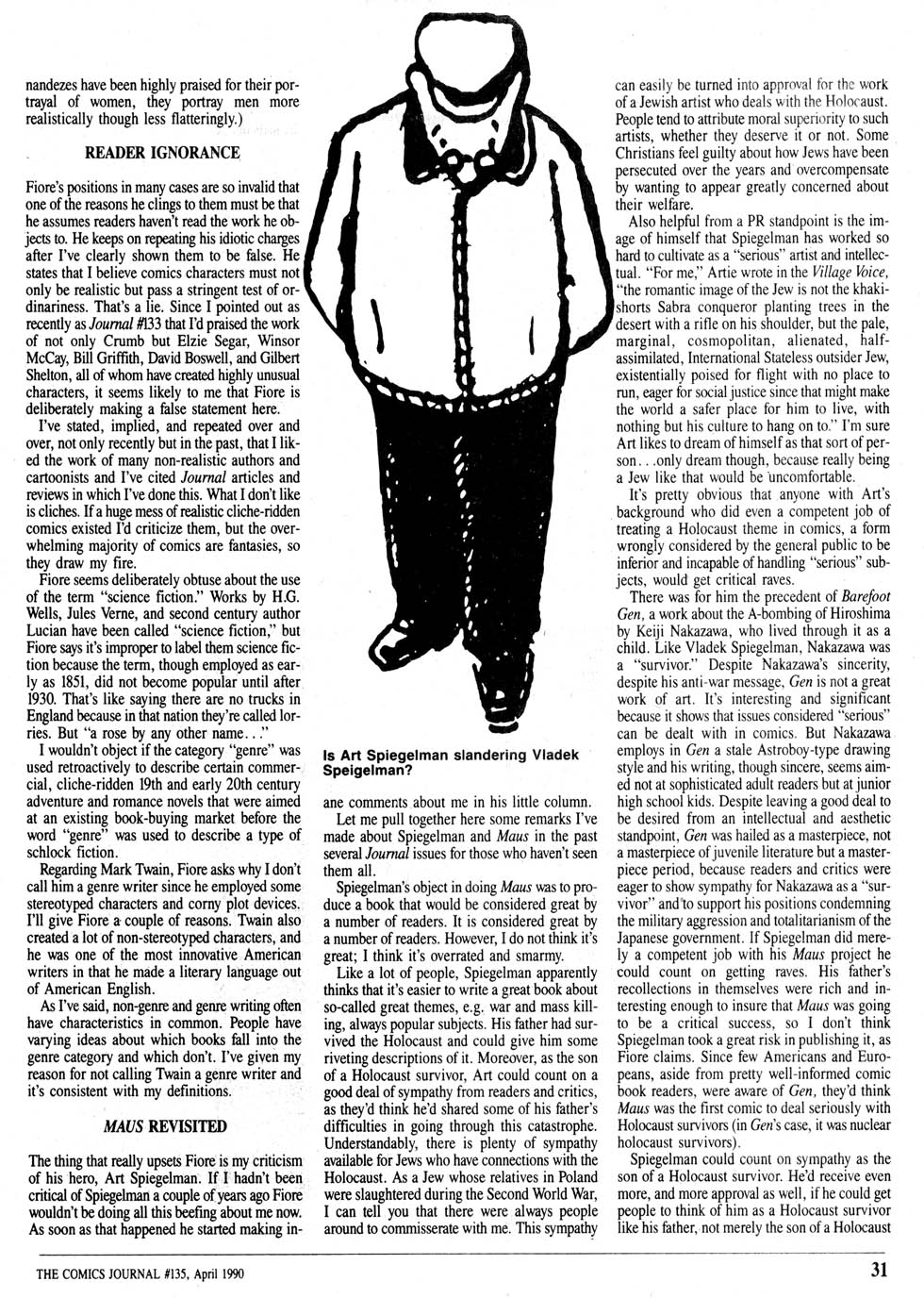 Did somebody ever collect the entire discussion?

Anyway: Maus I: The comic book that changed everything forever.

One thought on “PX86: Maus I: My Father Bleeds History”