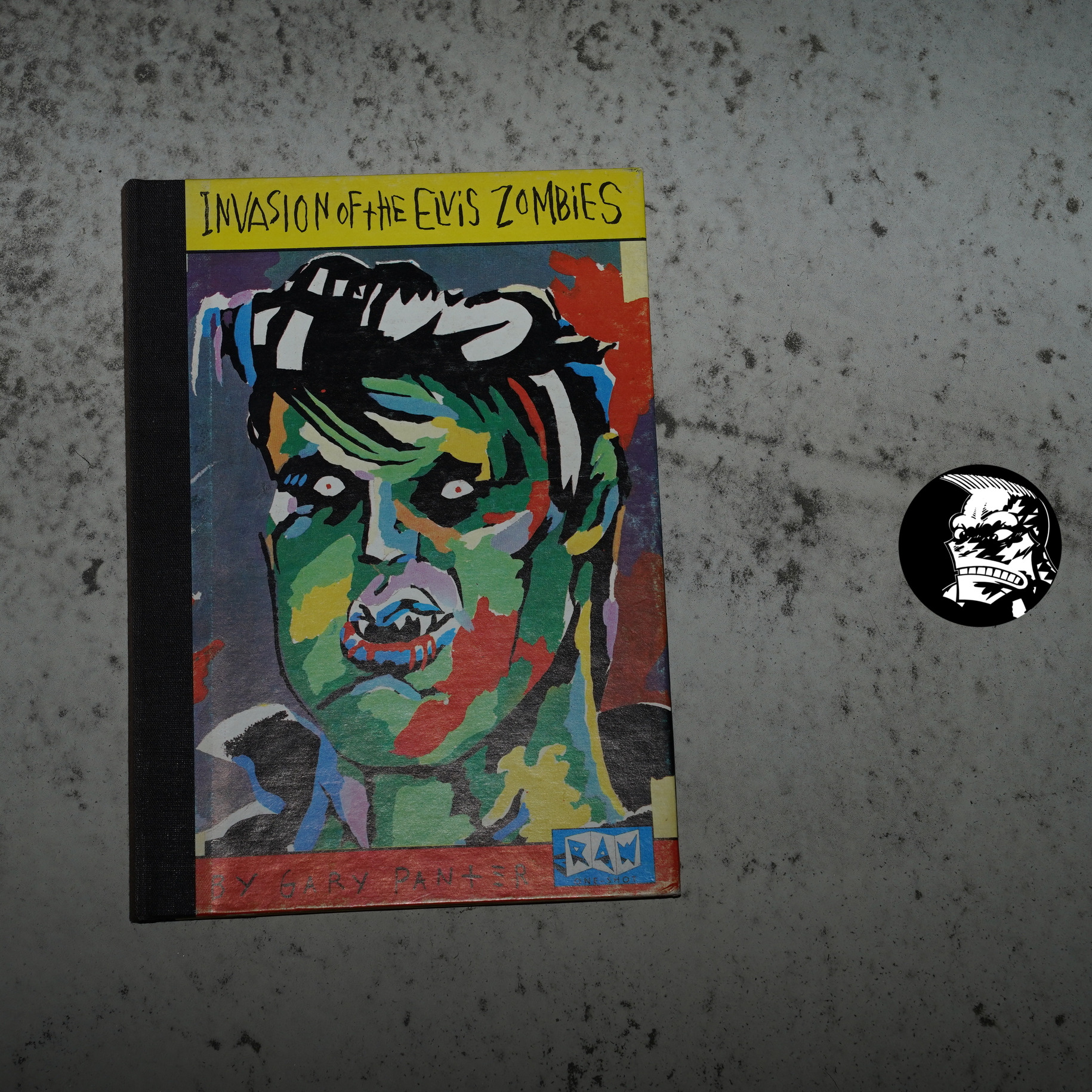 This was published in 1984, and I was 16 at the time. I remember being very puzzled by the book: I’d read a couple of issues of Raw at the time, but this was … something else?

First of all, the format: It’s book size, with hardback covers, a serious-looking binding, not a lot of pages, and this: 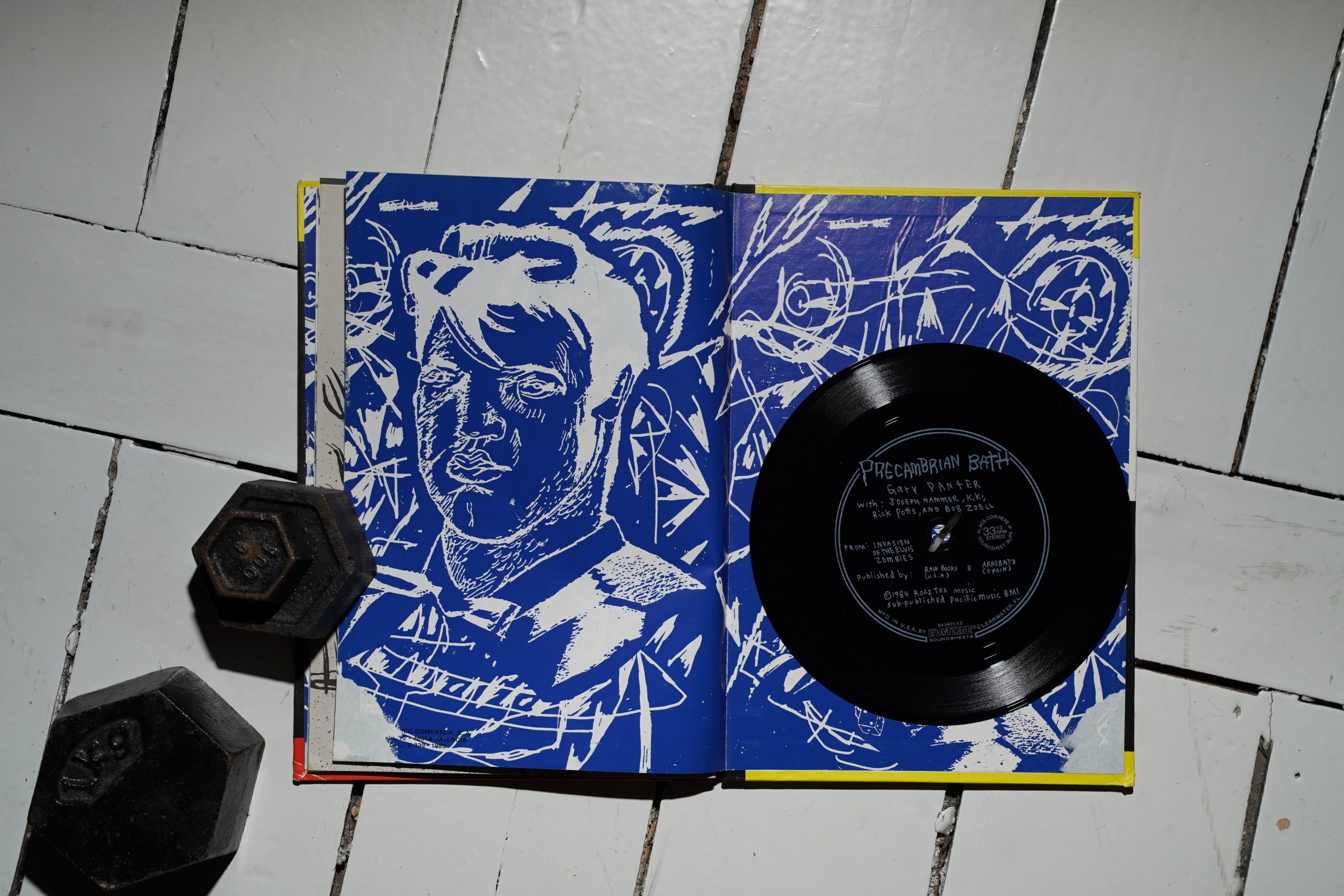 A flexi disk fastened with a split pin to the back cover. It’s all black and white except these end papers, so as an object it feels like it wants to be both “respectable” and playful.

You can listen to it, too! (I put it on repeat while re-reading this book now.) 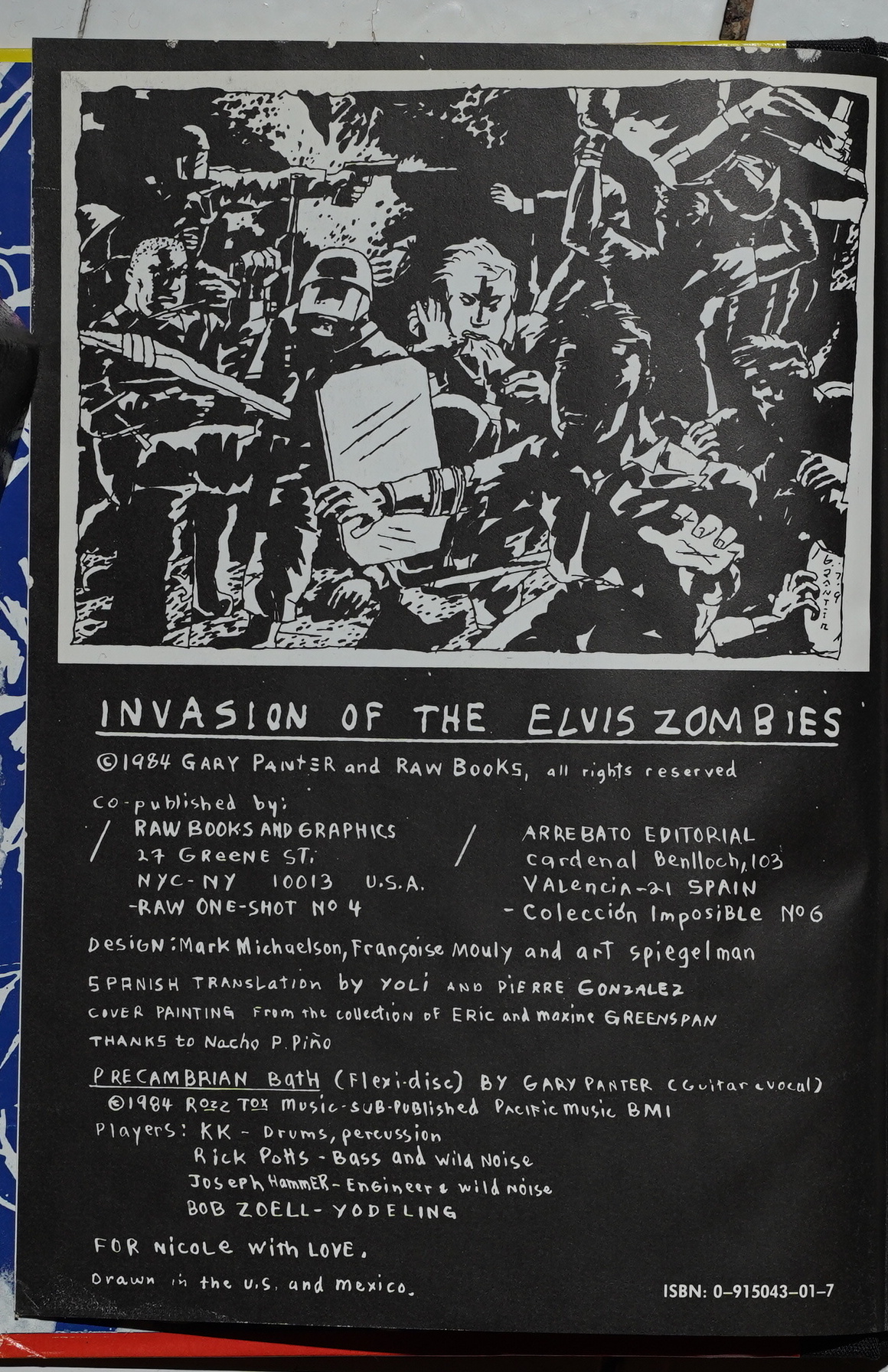 The indicia here seems to indicate that this was published both in the US and in Spain simultaneously, and that there’s a Spanish translation? 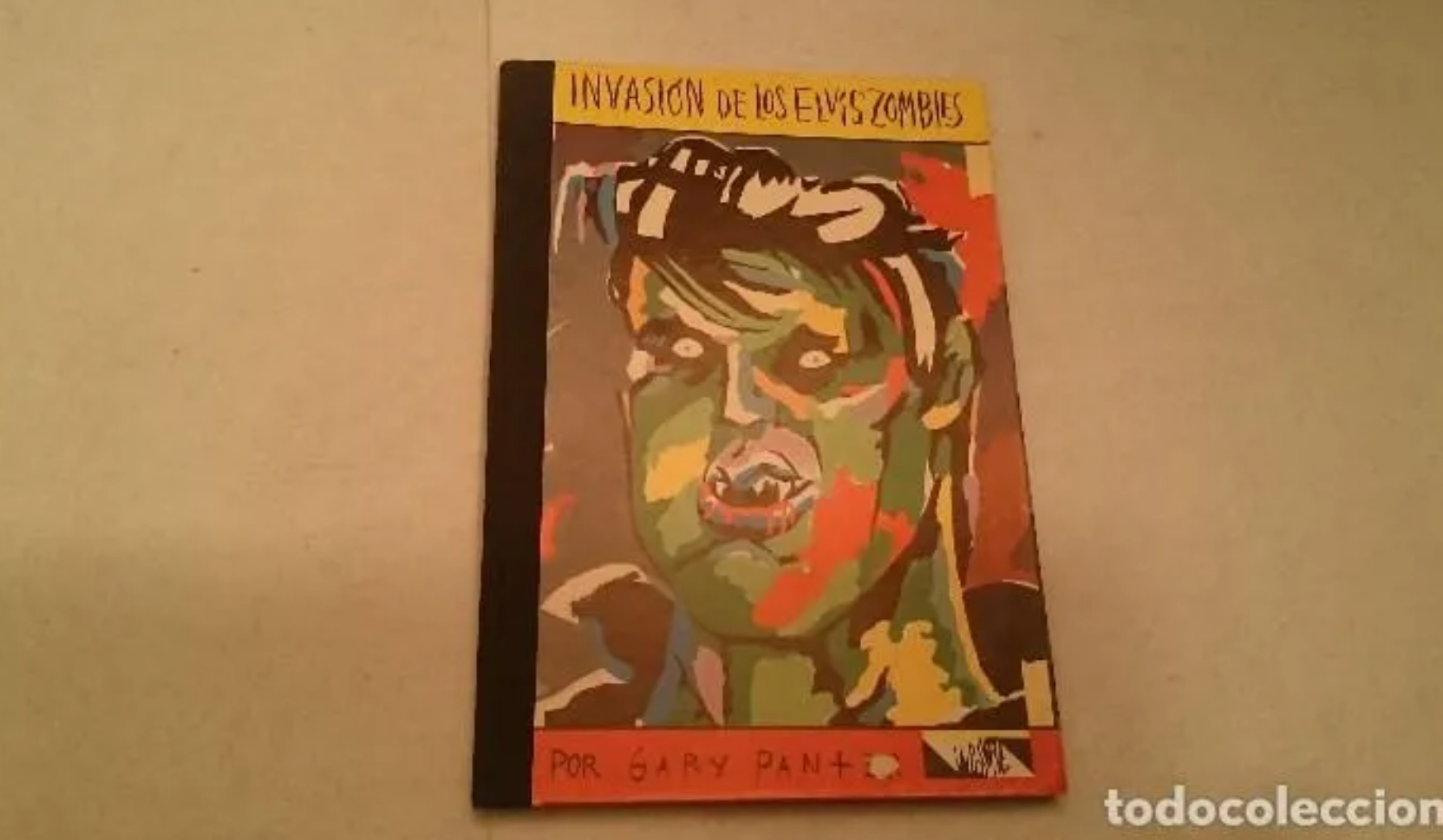 So there is! Invasion de los Elvis Zombies. 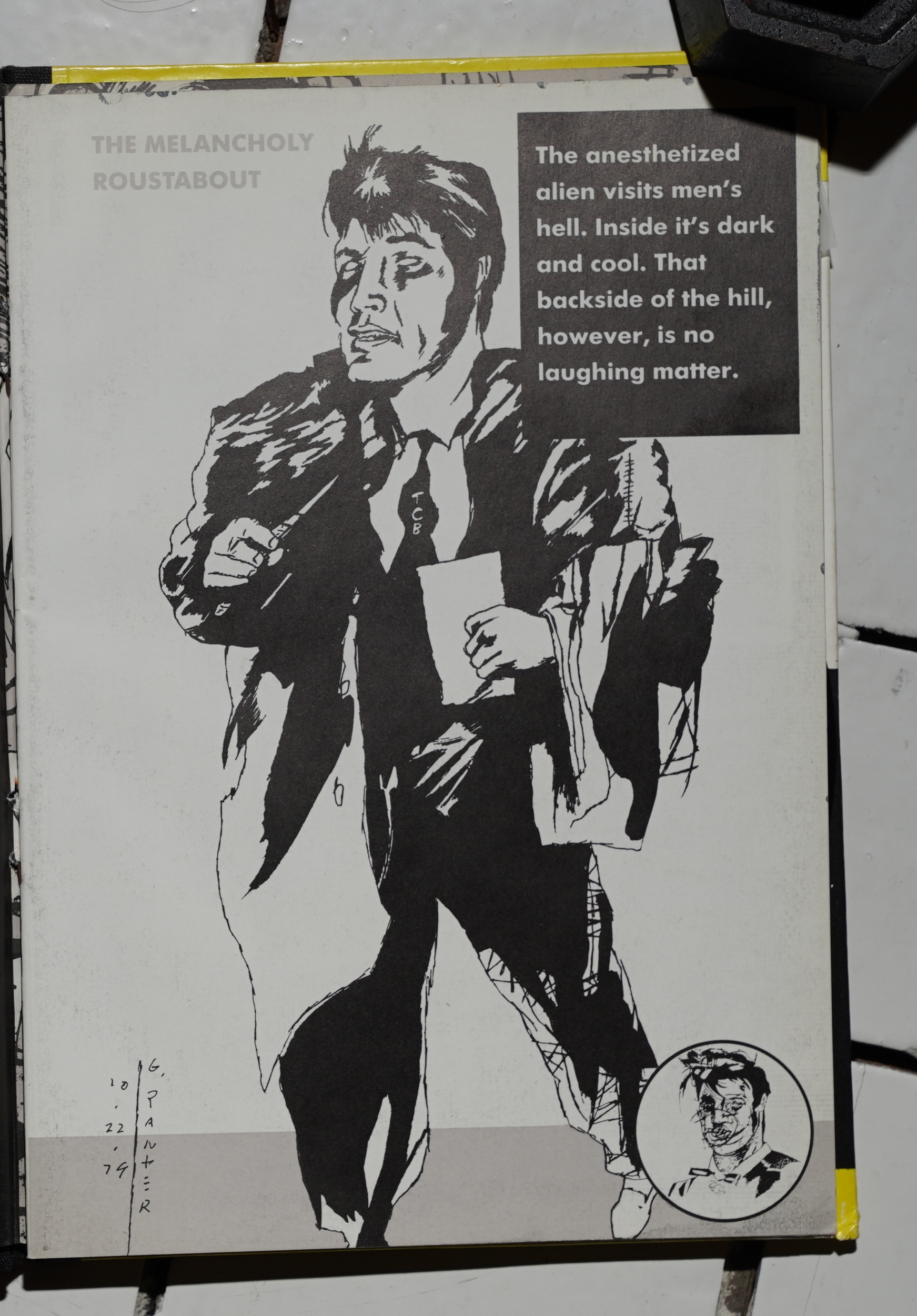 I remember reading this little book quite a few times — it’s a bit slippery. It’s a narrative work, but it’s not quite clear just what’s really happening. The Melancholic Rustabout somehow becomes a zombie and then terrorises some girls, and … that’s it. But it’s so… 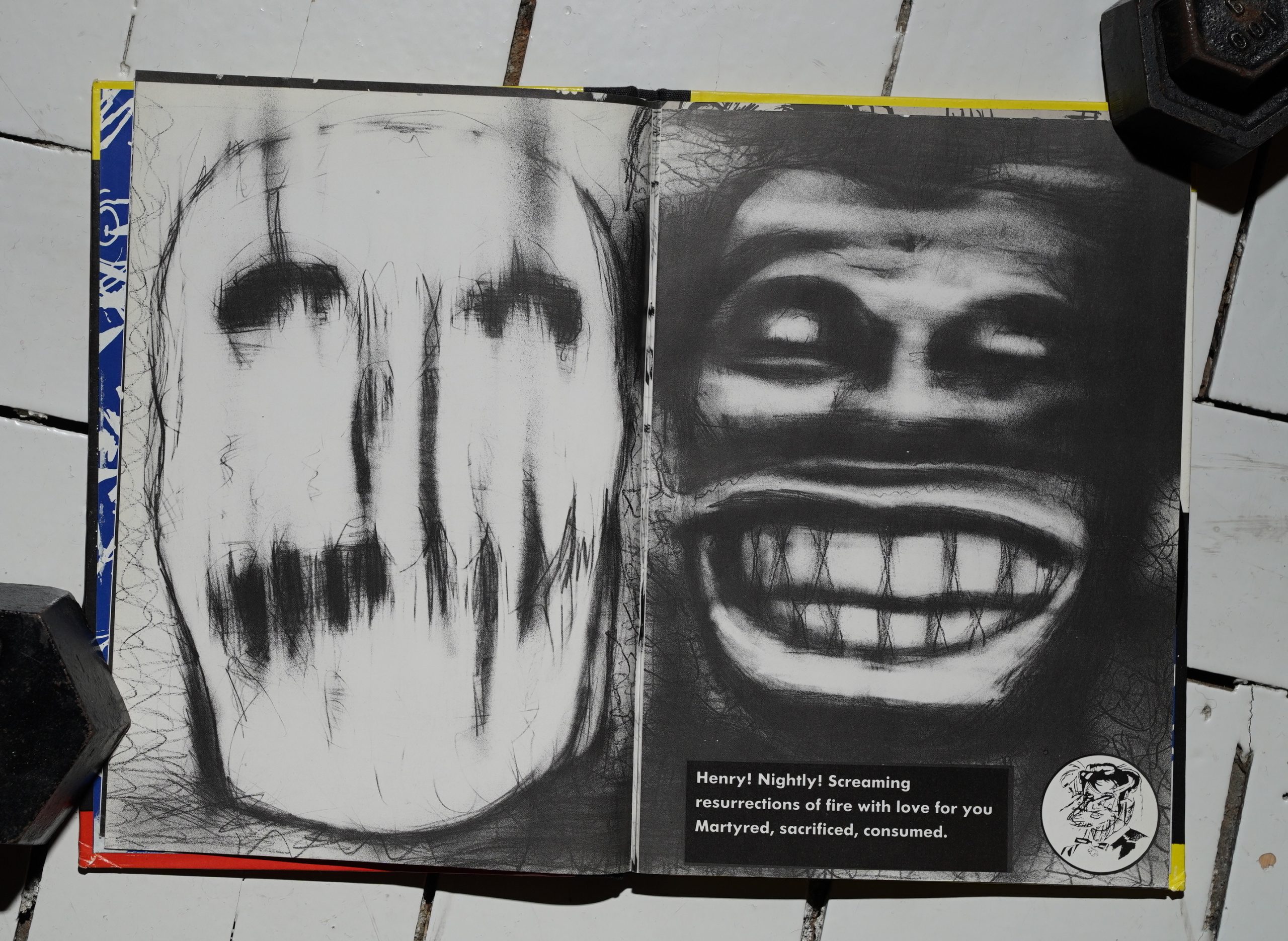 Panter uses a number of different art techniques and different voices, kinda overloading the pages with things to consider. For instance, there’s the kinda-sorta flipbook thing going on in the lower right hand corners, and there’s the typeset text (in Futura, of course)… 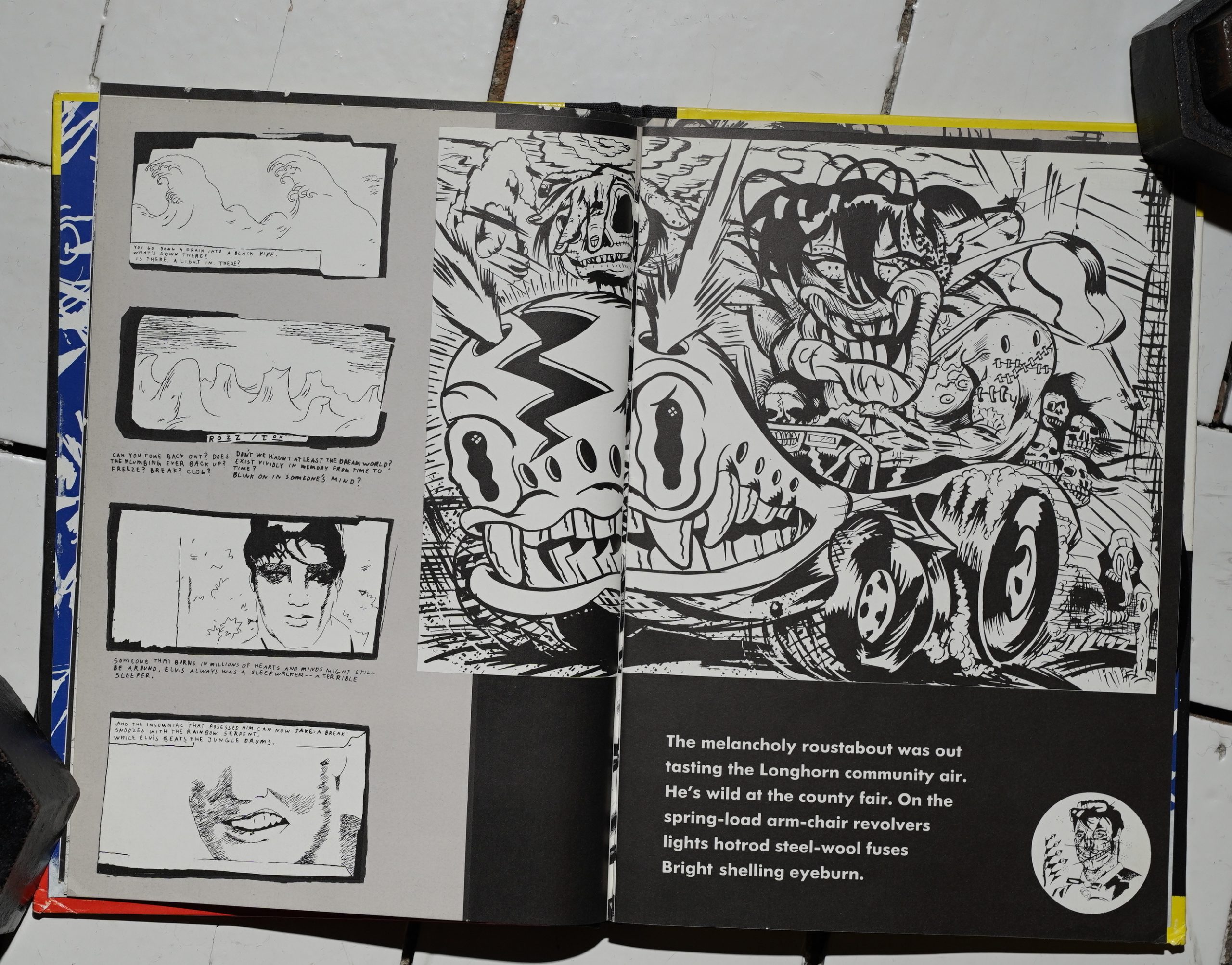 … but there’s also these inset panels in a different style. 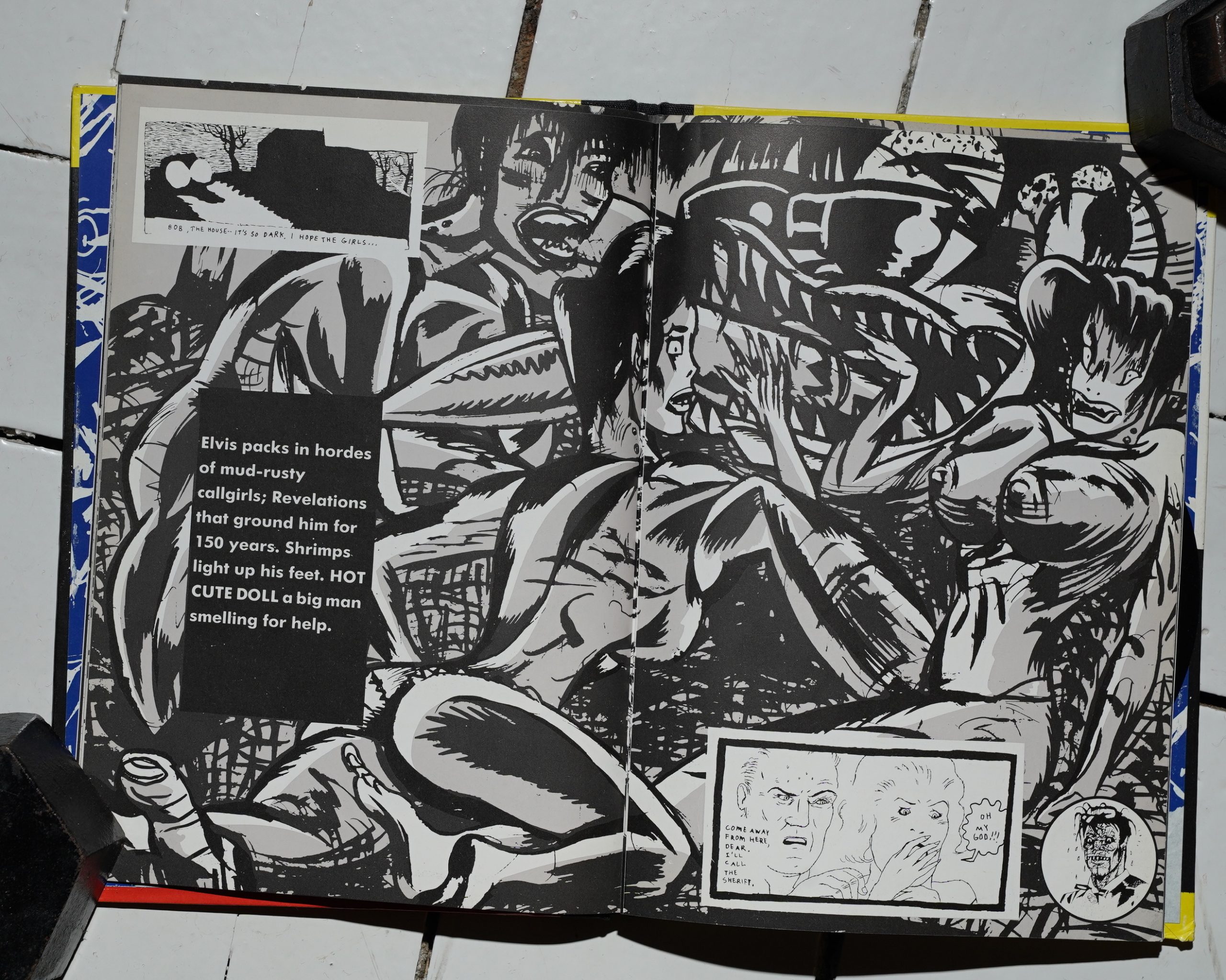 It feels like reading four different things at once, that somehow connect. 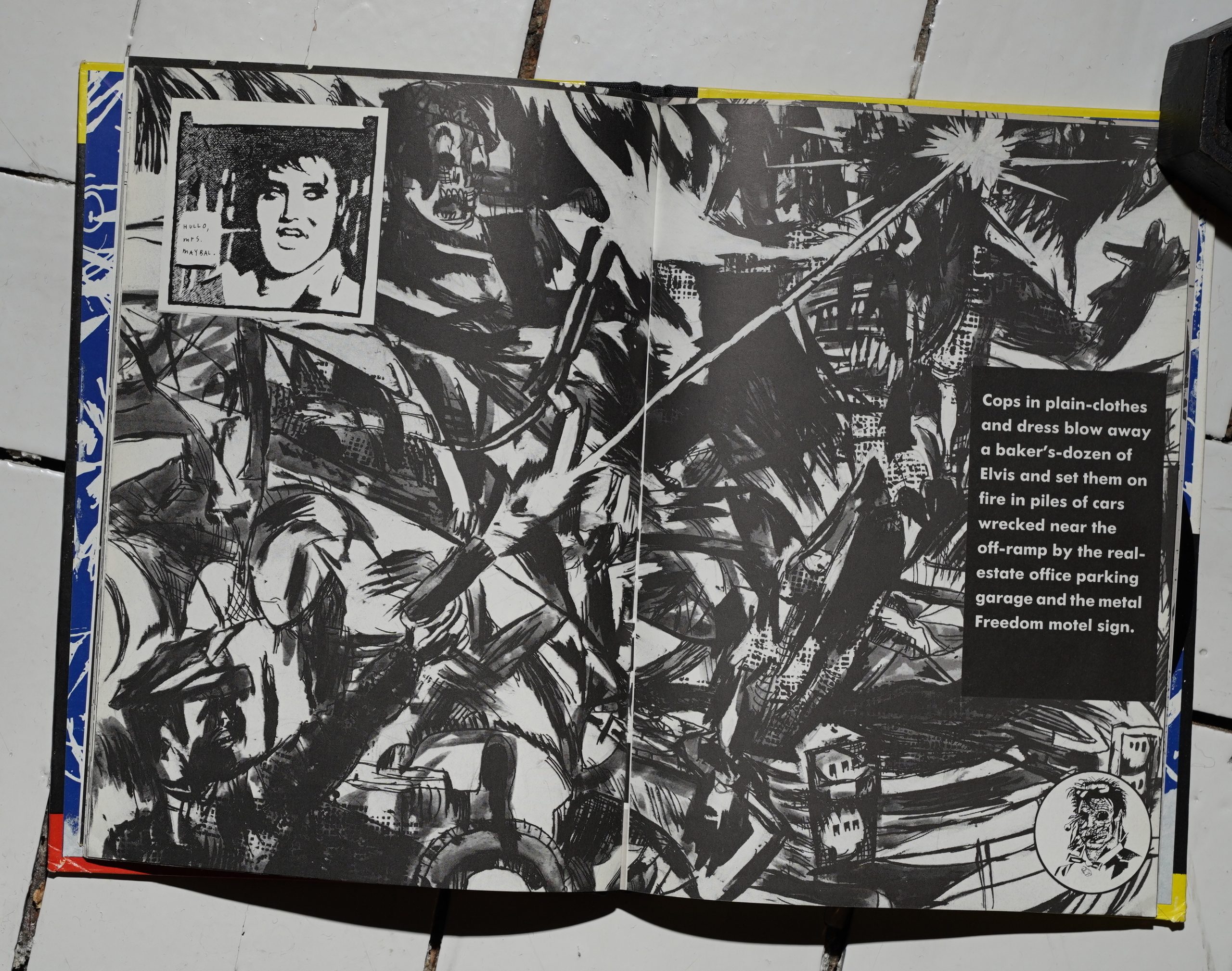 And did you know that the plural of “Elvis” is “Elvis”? 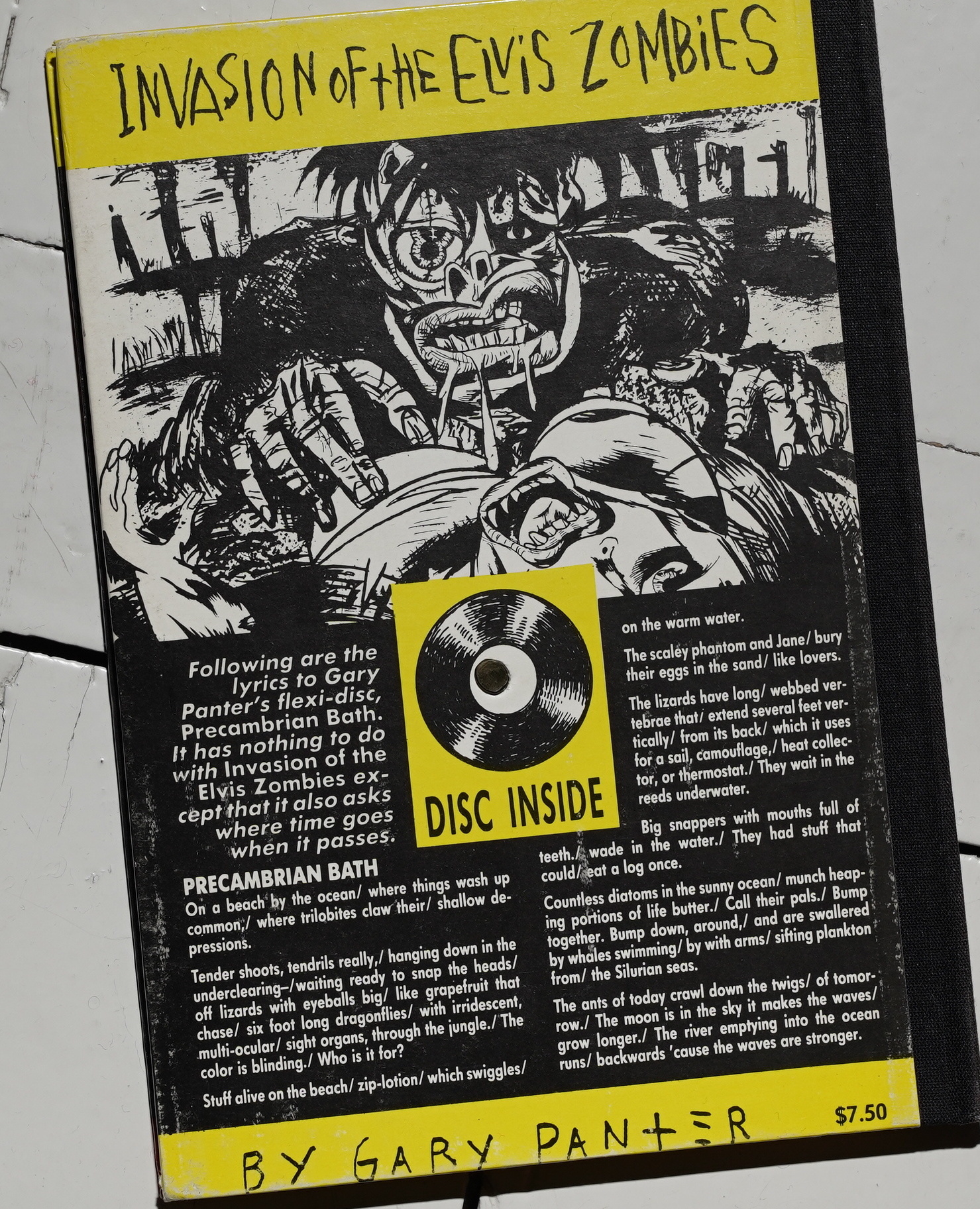 The back cover explains that the flexi doesn’t really have anything to do with anything. And note exorbitant price: I’m guessing comics nerds were just going “LOOK AT THIS! LOOK AT THIS PRICE! THIS IS SO PRETENTIOUS!”

I really adored this book as a teenager — it made me feel very clever indeed to own such an object. I remember thinking that the narrative bits could perhaps have been developed more, but reading it now, I think it’s perfect.

THE INFERNO OF FAME: HOW
TO DIE OF CONSUMPTION

Gary Panter’s Invasion Of The Elvis
Zombies, like Sue Coe’s How To Commit
Suicide In South Africa, is a RAW One-Shot
of -probably more limited appeal than
RAW itself. Maybe “appeal” is not even the
word, since Panter’s style is bent on putting
a grisly facade over an already grostesque
subject, and the immediate impact Of the
first, as well as its second and
third, impression—is Ofthe sort Of aesthetic
cacophony that RAW itself is, at its
extreme. A revie.ver, reaching for an ade-
quate phrase, might even wish that the
language offered such an option as “caco-
appearance or revelation of
the evil and foul or ugly—since this pro-
duct, unlike a horror comic that only
wants to play with surface emotions, seems
relentlessly to lay that ghastly emotion in-
side the reader’s soul, to make a permanent
redecoration Of that inner apartment from
which the hapless culture-consumer peers
forth. As with Coe’s book, there isa deeper
rationale—not political, as in her case, but
cultural—for this horror, a kind of pro-
found twist designed to make us reinterpret
forever the necrophilia that passes for
mass-cult. Panter’s book makes a devout
attempt to change the primal flavor with
which we sample popular experience.

He goes on like that for several pages and ends with:

The strategic initiative in our culture,
our history, has gone under-
ground, to infernal regions of our psyche;
and art is left equivocating whether it is an
xssertion or only a symptom, To play these
subliminal novelties—the new styles in
punk coupterculture—only for effect,
blindly and without forethought as to the
eventualities they may contribute to, seems
criminally irresponsible to me. American
culture, shaping as it does the conscience
and sympathies of an awesome super-
mower, needs to come to terms con•stantly
with the changing course of its history and
its options; it needs to recapture some
tangible sense not only of its ideal values
but also of its actual motives. Elvis Zombies,
like virtually every one of R.AW”s produc-
tions, seems gratuitously out Of tune With
those tasks: they are distractions that can
Ex• mass-distributed to the alienated many.
The privilege of alienated isolation is not
something that history tends to respect for
very long: freedom that does not play an
organic, political role in its society com-
monly becomes (in Edgar Friedenberg’s
phrase) another dispensable “industrial
waste.” But then, all delusions are a kind Of
fool ‘s paradise.

Epater la bourgeoisie! was once a common
cry in Paris cafes. It came from artists, of
course, and meant, more or less, “confuse
the yuppies,” or “spit on the fuckers.”

This brings us to Art Spiegelman.
Spiegelman is an instructor at the School
of Visual Arts in New York. He is the
originator of RA W. The aesthetic Of RAW
is close to epater la bourgeoisie, to the line
which runs from Alfred Jarry to Dada to
Surrealism to punk. Spiegelman is a tireless
promoter of new talent.
Spiegelman’s latest offering is Raw One.
Shot a 36-page hardbound book,
printed in duotone, for $7.50. It is Invasion
Of the Elvis Zombies, by Gary Panter. It in-
cludes a flexi-disc recording of Panter’s
song ‘ ‘Precambrian Bath,” which has noth-
ing to do with the book, “except that it also
asks where time goes when it passes.” The
disc is faintly punkish, but even more
reminiscent of early Zappa.
Gary Panter does not have what you
would call a normal mind. Invasion of the
Evis Zombies includes many full-page and
double-truck drawings in ink, wash, and
pencil, vaguely in the manner Of a Ralph
Steadman with serious drug problems.
Each of these is accompanied by a short
typeset text, sometimes grammatical,
not, and never linear. Each page
also includes a few panels from a more
linear comic strip, drawn in Panter’s Jimbo
style. The two “stories” sort of interlock; at
least, Elvis figures in each.
I am not about to pass judgment on this
work. It is certainly no madder than, say,
U.S. foreign policy. All I will say is that
Panter’s vision is authentic, and Spiegel-
man shows considerable and continuing
Courage in bringing work like this out.

I think Smith found more to say about the book, so I think he wins.

(Several copies of Raw 7 and this book were stolen from a warehouse.)

Mystery salesman: Cutler said he
came into the books when a
stranger came into his shop and
offered to sell the copies Of RAW
and Elvis Zombies at a discount
that Cutler uouldn•t divulge. He
added that he didn’t think the
copies were illicit because he had
heard that copies had just
recently become available. had
a couple Of friends Who went to a
party at Art’s. and they said they
were copies on sale there: • Cutler
said. Spiegelman hotly denied
that. according to Cutler. and
Spiegelman also told the Journal
that no copies had been sold
when Cutler had them in his
Mouly said that when Cutler
realized that she and Spiegelman
were intent on pressing chargers.
Cutler•s immediate reaction was.
• •If can get the COPS out Of
here, I can make a deal With
you.” Cutler said that the deal he
wanted to make was to give the
two the books they claimed were
theirs. rather than fighting
through legal channels for them.
wasn’t trying to do anything
underhanded.” he said. “l just
didn’t want the voliee involved.”
However. Spiegelman and Mouly
proved intractable: they had
Culler booked and taken in
handcuffs to the milice station.
“The guy isn’t evil—I didn’t feel
great about having him booked: •
Mouly said. “But the choice was
to dismiss it as if there were no
law enforcement.”

Charges dismissed: On November
25. Cutler had the allegation
against him dismissed due to the
overly long time involved in
bringing the case to trial. Cutler
said that While he is glad the ease
is finished. he still hasn’t received
the S52 worth of Elvis Z»nbies
that the police confiscated.
although he expects to. Spiegel-
man said that although he didn’t
Win the case. he did learn from
it. having installed greater
security on his warehousc_ “l
guess it’s a lesson in civics.” he
said.

LUCIANO: The uork in RAW seems
much more painterly than some of the other
uork.
PANTER: I’ve finally got my sketch
books—I just draw in these sketch books all
day long. just draw-out of my head or
copy from photos. Then I make paintings
from those, so the cartoons and the pain-
tings are starting to overlap with one
another. Jimbo’s the closest I’ve come to
combining all the stuff. Let me mention
one other thing. There’s a book I’ve been
working on for some time entitled Invasion
of the Elvis Zorhbies…
[ pause]
LUCIANO: Nothing surprises me any more.
Invasion of the Elvis Zombies?
PANTER: Yeah. And RAW’s going to
publish it simultaneously here and in
Spain. It’s being published by… well, I’m
not sure what the publisher’s name is…
uhhhh… IRummaging around in search of
something with the publisher’s name on it].
uh, here’s something.. Carnival de los
Ciervos. That’s it.
LUCIANO: Carnival of the Deers? That’s
the Spanish translation of the title or the name
Of the Publisher?
PANTER: I guess that’s the publisher.
[Reading some more from a letter] Collection
Impossible… Arregato Cardinale.. .l’m
not sure what… Spiegelman will know.
Can you ask Spiegelman?
LUCIANO: Why don’t we just transcribe
that as is and call it ratty interviewing?
PANTER: Anyway, that’s the big project
for the fall.
LUCIANO: Invasion of the Elvis Zorn.
bies!
PANTER: It’s supposedly going to be out
in time for Christmas!

For a book that’s kinda famous, there isn’t much writing about it on the net, but here’s somebody:

Surreal, almost dada-ist in delivery, this is a challenging read but shows just how far the medium of comics can push its own envelope.

But the book has never been reprinted, I think? Except tree pages as part of this anthology. So I guess few people have read it.

One thought on “PX84: Raw One-Shot #4: Invasion of the Elvis Zombies”