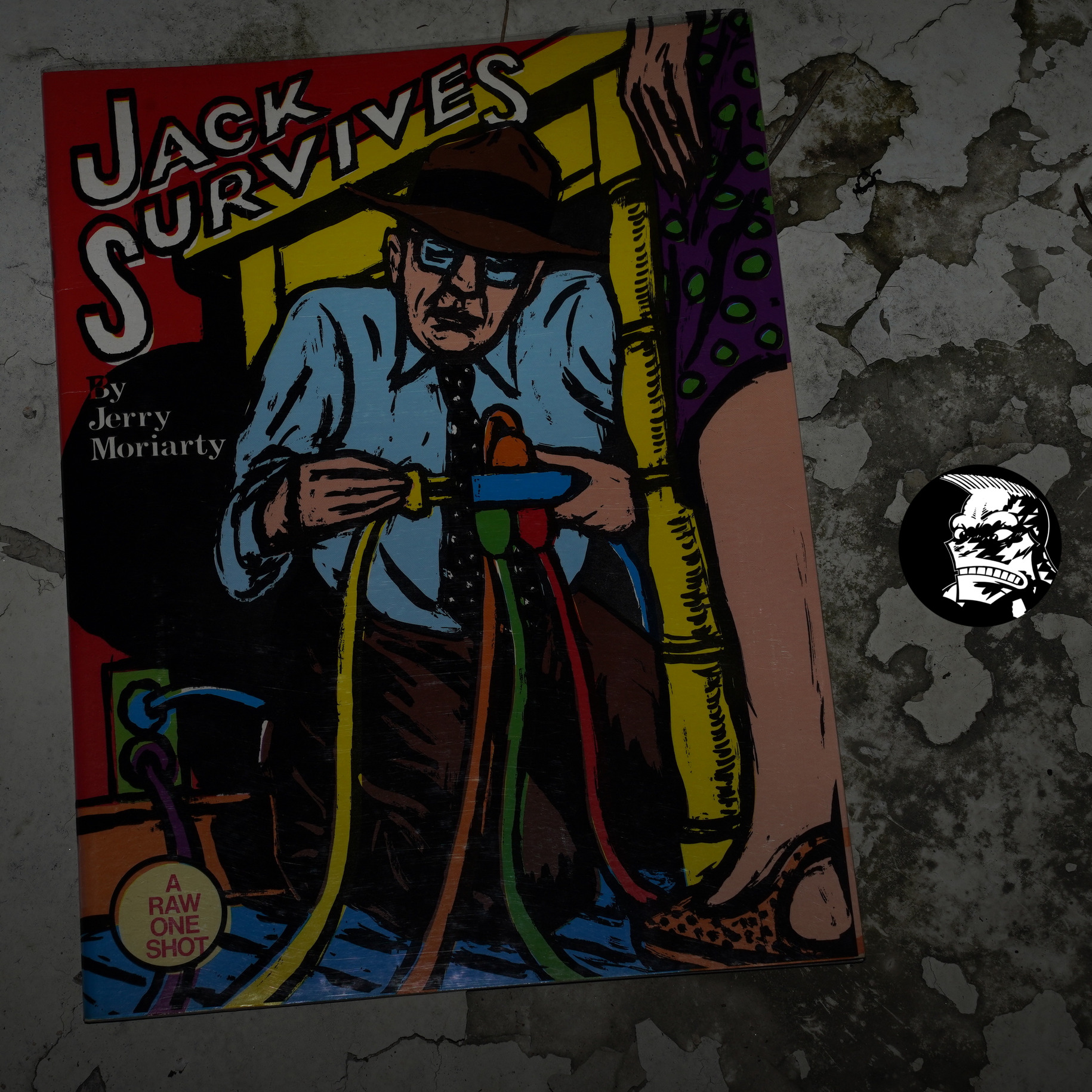 This is a book I wasn’t able to find when I was a teenager — I didn’t score a copy until about a decade ago… But I’d seen Moriarty’s pages in Raw, and I’d seen pics of the book itself on the interwebses. But I didn’t realise that the cover was in two parts: A transparency wrapping around a four-colour cardboard cover: 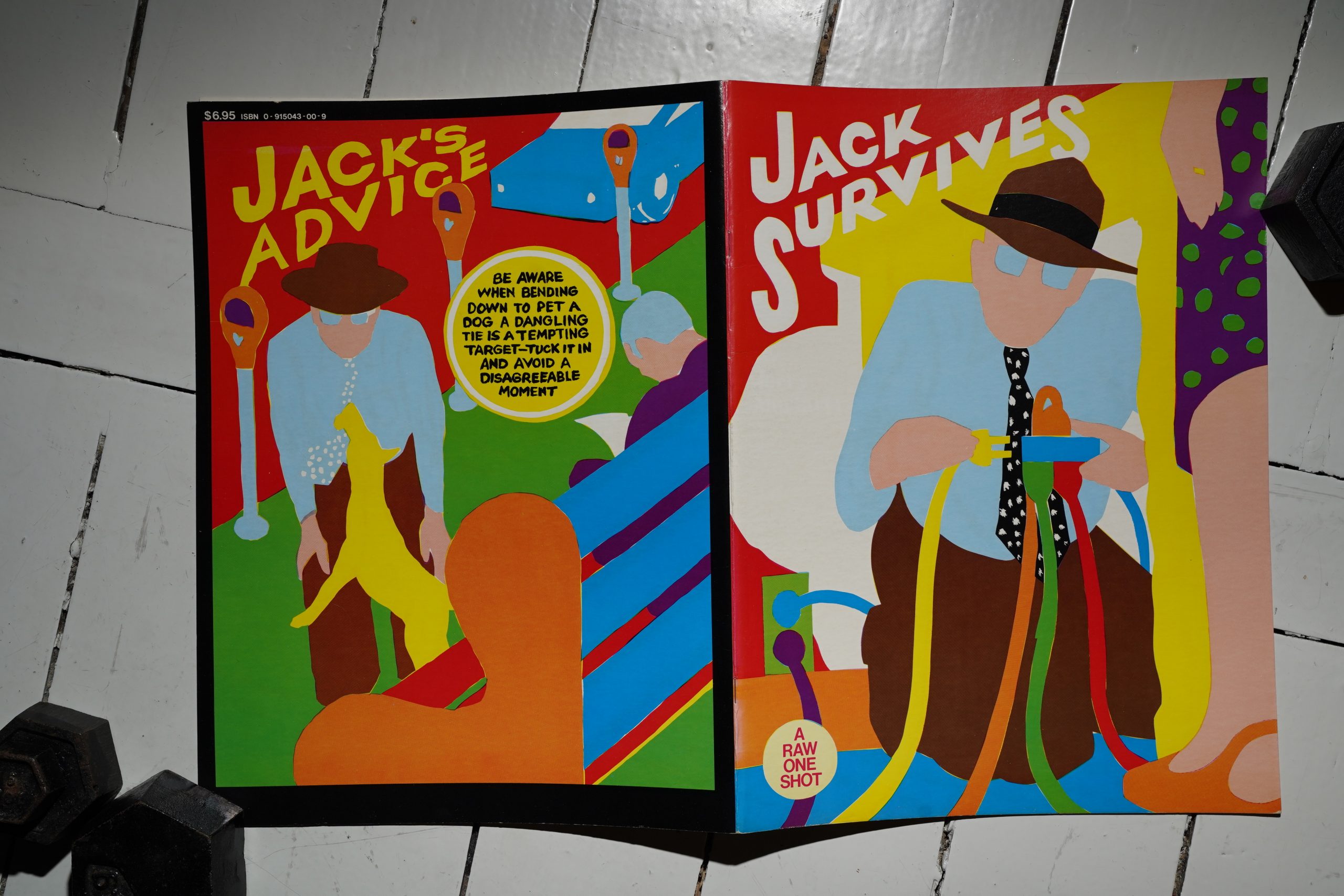 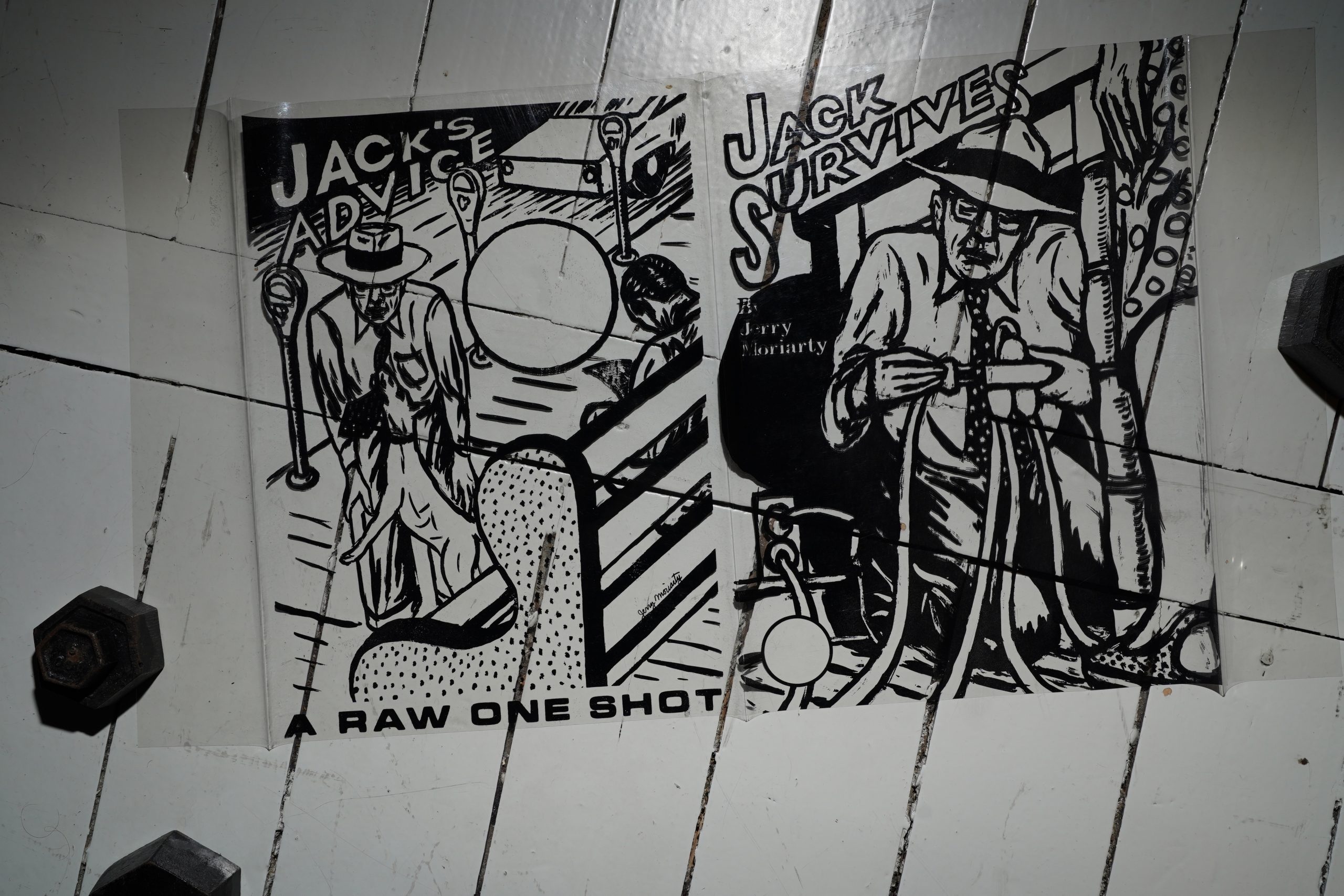 … and the overlay. Gorgeous! 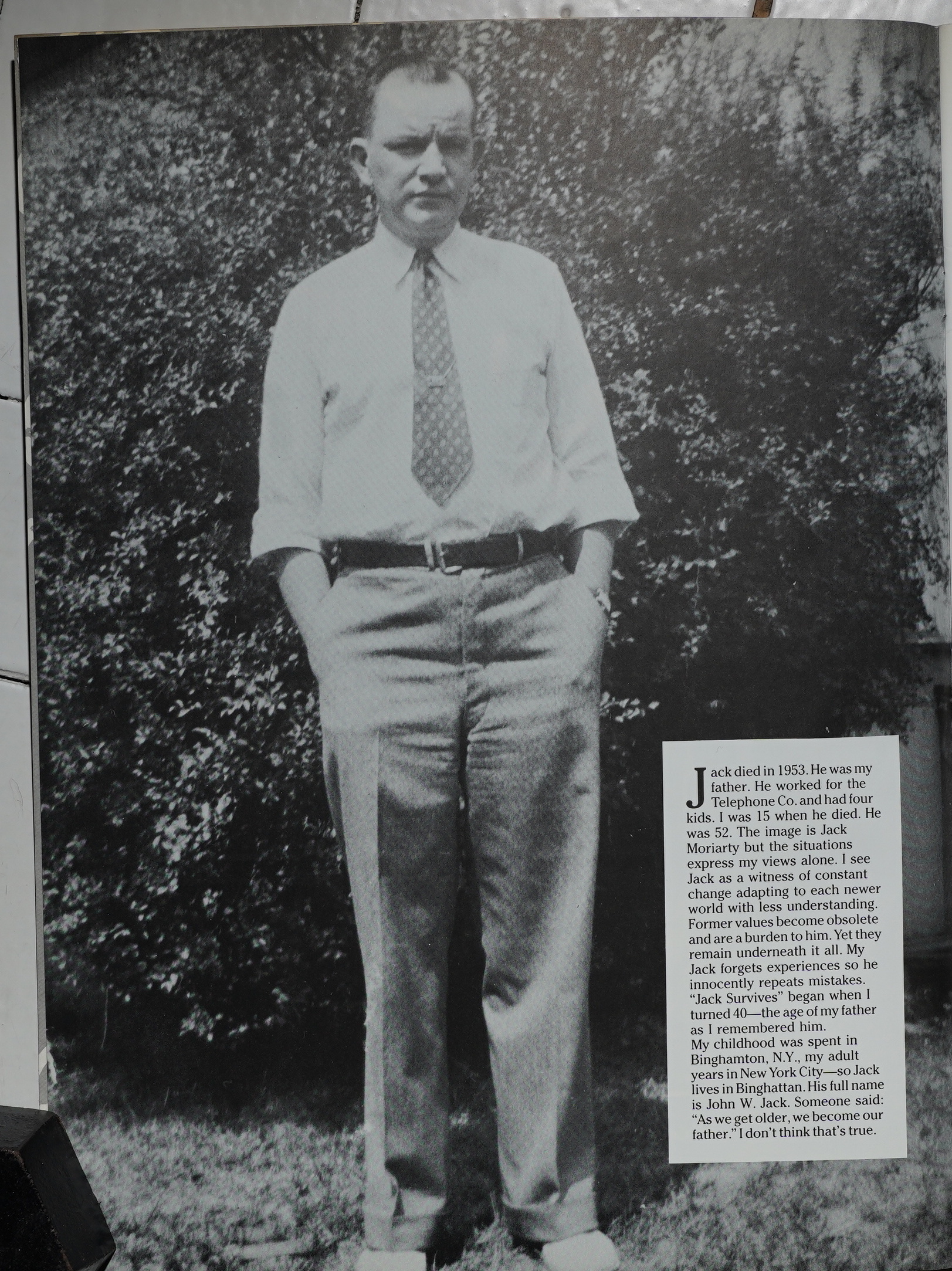 Moriarty explains that the titular “Jack” is his father. Sort of. 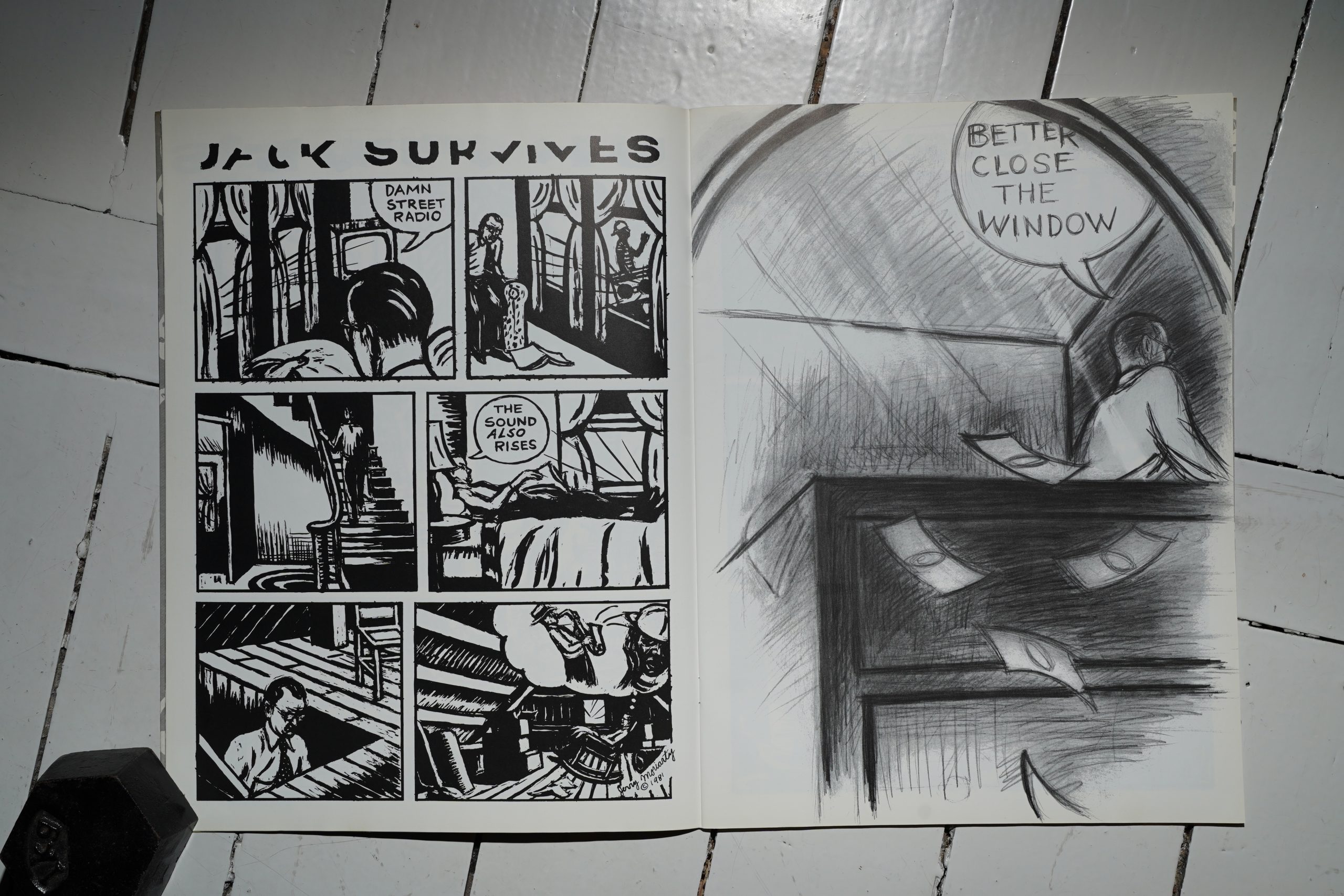 The book is mostly one- or two-page strips that have a kinda vague flow… but also these single page illustrations in a different style (reproduced from pencils, I guess?) 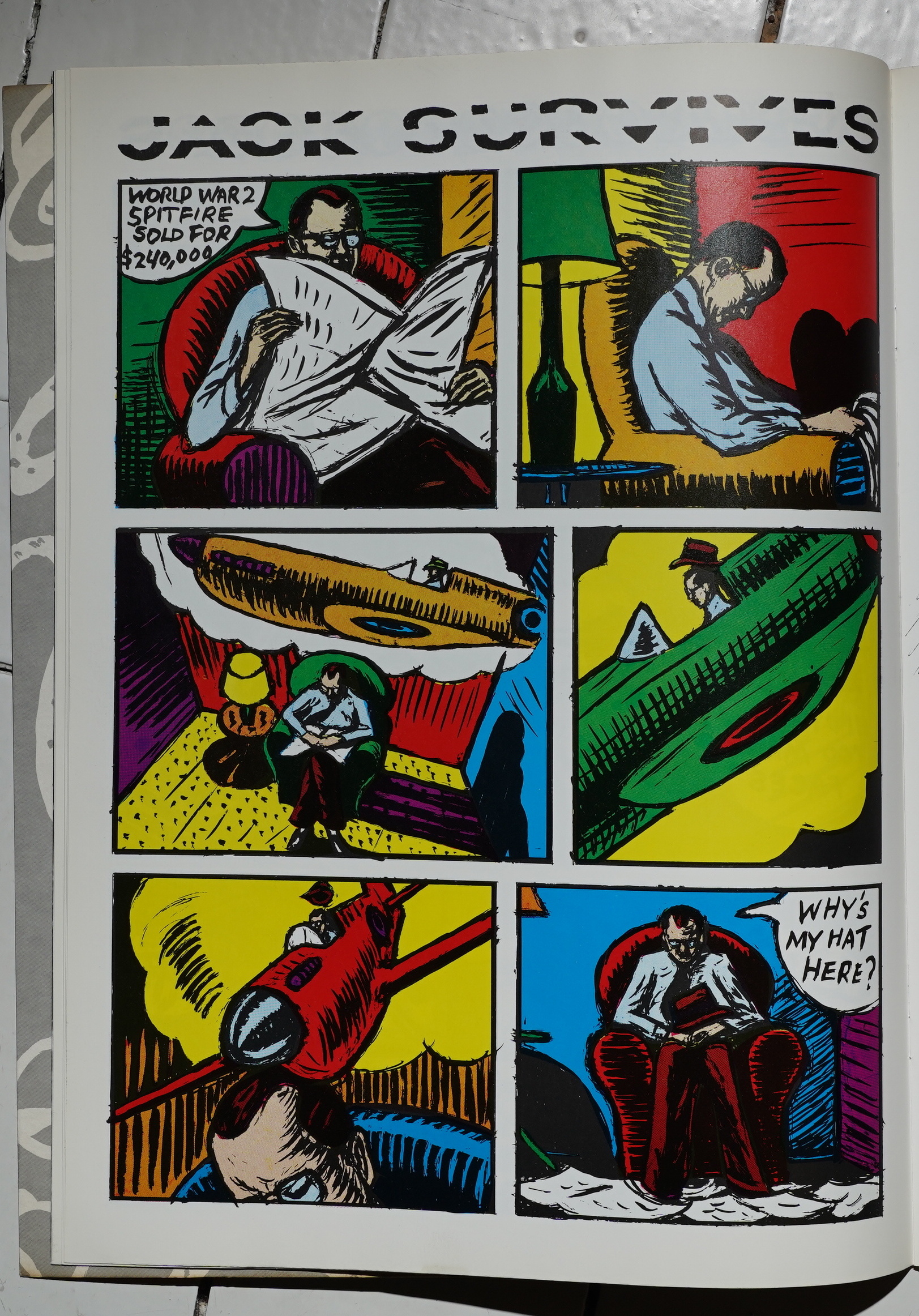 And also the occasional colour page. So it’s a printing puzzle — if this was printed on a big press, eight pages to a sheet, then one side of one sheet was printed in colour, giving us four colour pages. (And then there’s the complication with the cover.) It feels very luxurious. 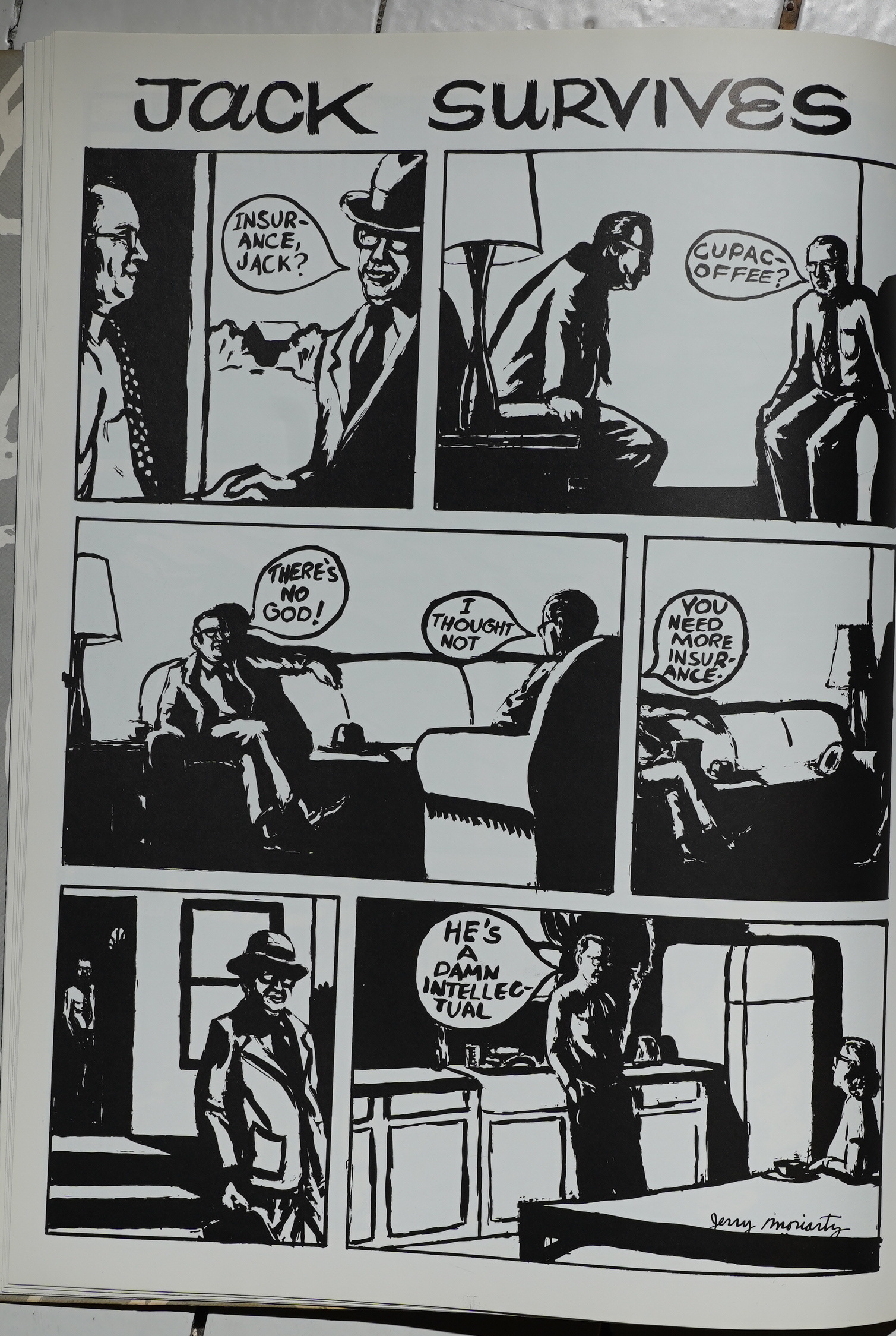 Some of these pages a straight up gags, and the above made me LOL out loud, but most are just kinda vaguely disturbing, while being amusing… it’s a strange effect. And, of course, Moriarty’s artwork is just so beautiful… 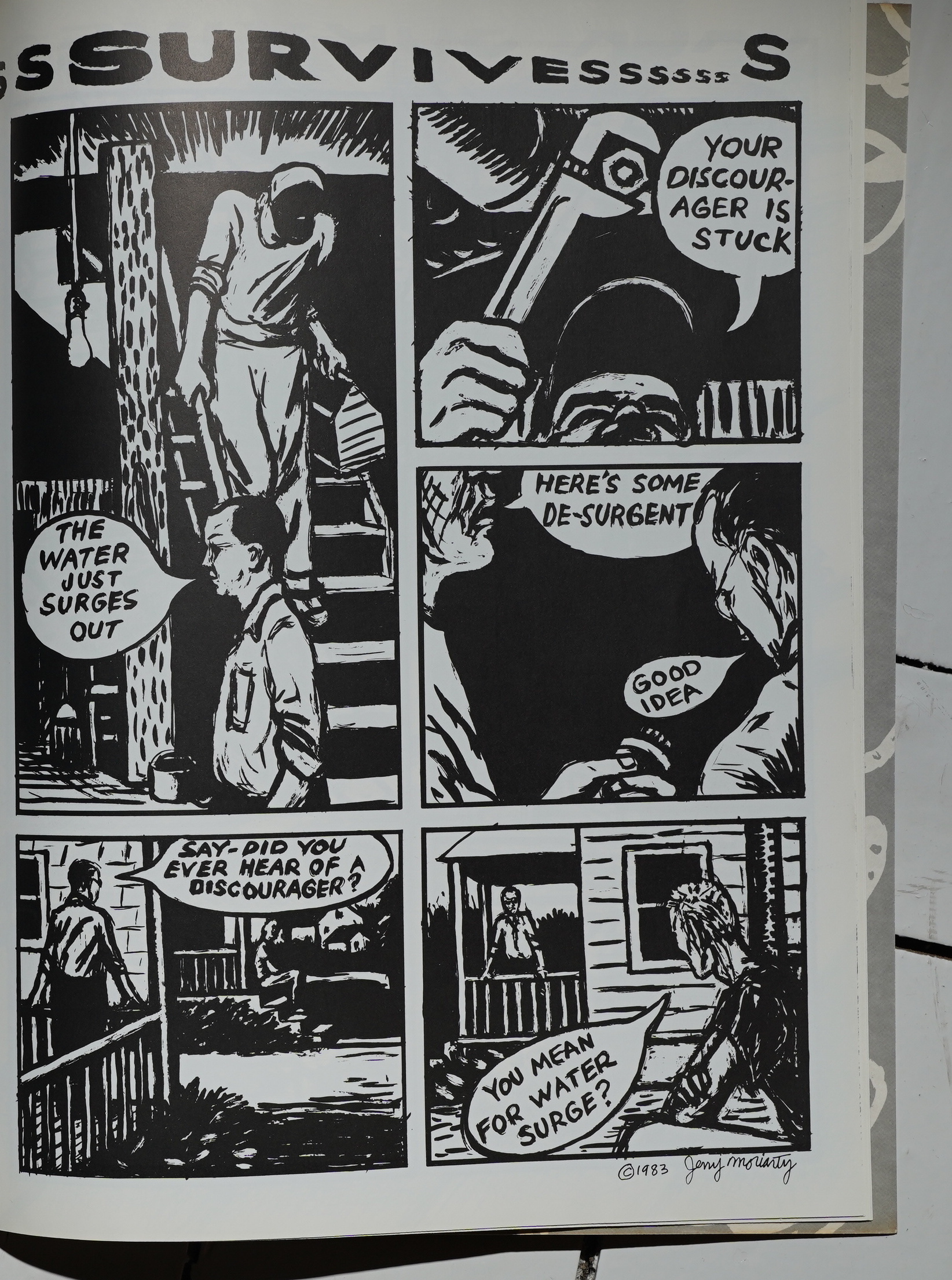 I was so taken by that panel that I used it for when I was teaching myself screenprinting t-shirts: 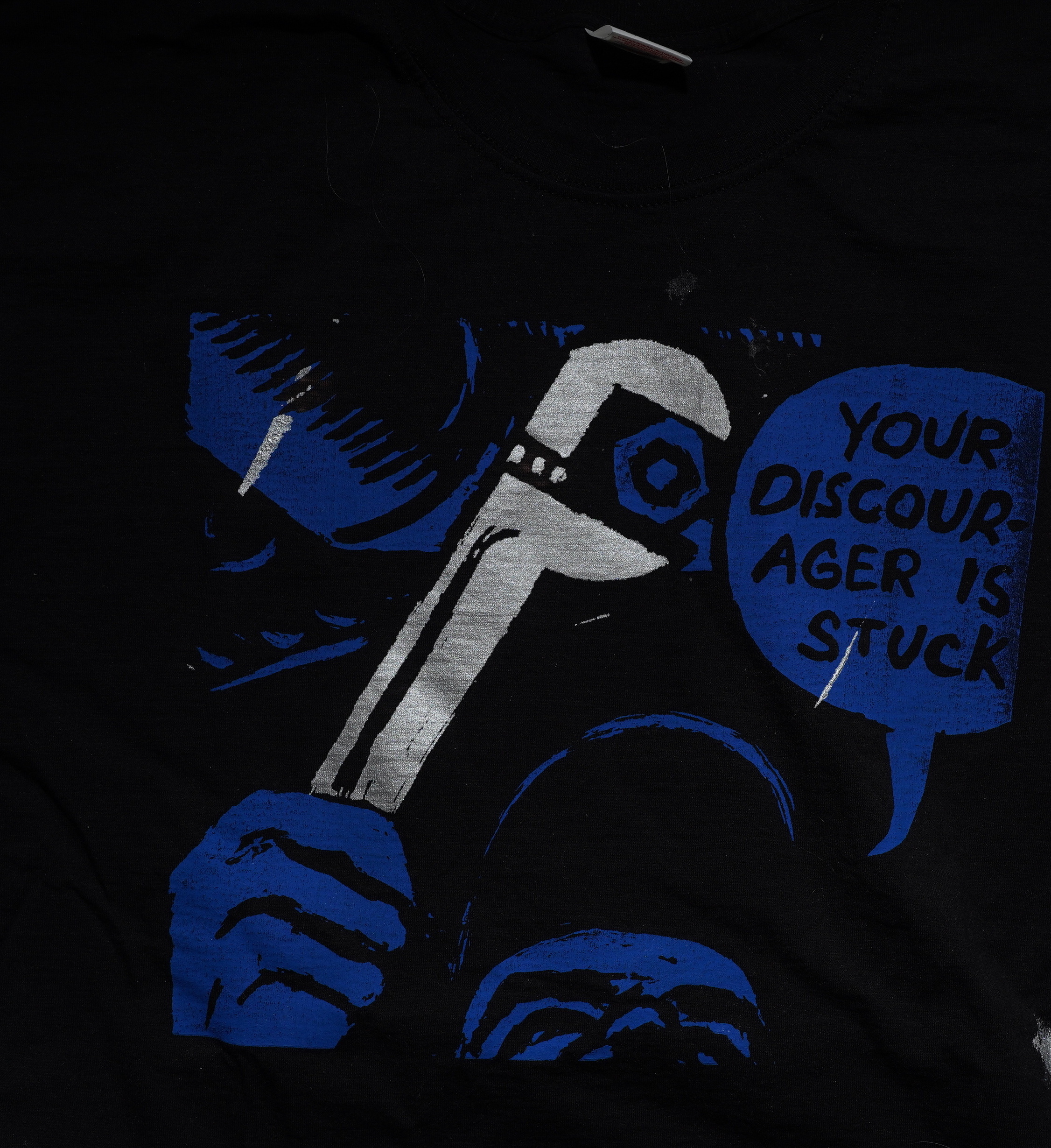 I fucked that one up, though. Screenprinting’s hard!

Anyway, it’s a lovely book that I’ve read many a time. It’s got a calmness to it that’s super attractive.

The latest in the Raw One-Shot series is
Jack Survives, a 44-page, oversized collec-
tion of strips by Jerry Moriarty. Jack Sur-
vives, which Moriarty has been drawing
since 1977, is a reflection on the life and
times ef the artist’s father, a phone come
pany employee who died in 1953. It is also a,
meditation on the nature of common-place
events in What might fairly be described as
an unexceptional life. In a tangible sense,
Moriarty projects himself into the strips,
living through the moments of banal inci-
dents that, in some odd, ambiguous ways,
distill and summarize the tome of an ordi-
nary urban existence.

Moriarty’s painterly technique has a ‘lot
to do with the strip’s melancholy aura. The
human figures in Jack Survives are rendered
indistinct, often glimpsed from an obscur-
ing perspective or only partially visible
within the panel. (lack is often the Central
figure within a panel, and subsidiary char-
acters are most often glimpsed frorrq be
hind: in the two-page centerfold, however,
most of Jack’s face is hidden by a staircase.)
For the artist,’ this probably approximates
something like the function of memory, in
which the outline of an image or incident is
recalled but the particulars are blurred or
obscured •from sight. Moriarty also in.
cludes a few actual photographs of his
father. In one, reproduced as a full page,
John W. Jack stands, hands Qucked inside
his pants pockets, an ordinary middle-class
guy with thinning hair probably caught by
the camera in a casual, leisurely moment
gazing out at uS across a span Of more than
three decades. The ambiguity of these
photographs, images frozen in time and
each imparting its own mystery, reverbe-
rate throughout the strips, lending an
added poignance. Who was this man?? We
cannot possibly know or touch his life, but
when Moriarty gives us Jack, painting
chairs in the basement of his hoose while
daydreaming of painting pictures on can-
vast we catch a somewhat forlorn glimpse
of a man’s hopes and dreams.

Jack Survives is a beautifully imagined use
of the graphic narrative form, and Fran-
coise Mouly, Art Spiegelman, and Mark
Michaelson have edited and designed the
book with exceptional skill and taste.
Inoking•through this book, you may find
yourself ceaselessly pondering the distance
between the expansive possibilities in a use
of the form like Moriarty’s and the con-
strictive adherence to formulae in main-
stream comics. Worlds and worlds and
worlds apart.