It’s been three month since the last post in this series, and that’s because… I took a few months off. I had meant to take a vacation lasting just a couple of weeks, but I have a very one track mind: Either I’m doing This Thing, or I’m doing A Completely Different Thing.

So I did A Completely Different Thing for two months.

But I’ve been back at it for some weeks now, and this time I thought I’d try something different: Try to establish some sort of work/life balance. But since Emacs is life, Emacs is love, and (now) Emacs is work, that’s difficult to achieve.

My methodology has been thus: I’ve removed the laptop charger from the couch area. So I get up in the morning, have some breakfast, collect my laptop from the awkward charging area, and plop myself on the couch, doing Emacs stuff until the battery runs out.

And after that, I’m not allowed to do any more Emacs stuff the rest of the day: I close the Emacs topic (cleverly called “Gnuses”) where all the Emacs groups live, and I’ve removed the indicator that says whether there’s anything new there, so I’m not tempted to open it and see whether there’s any responses to what I’ve been doing, or somebody complaining that my latest commit blew up Emacs completely, or or or

Let me tell you: It’s hard. It’s just hard. This is not how my mind works: I’m always 100% in on whatever I’m doing, compulsively. When I look at my laptop now, I have to force myself not to open that topic — if I let my mind wander, my fingers will automatically move point up there and open it.

And there’s days I’ve failed completely, and have just been doing Emacs stuff all day.

Perhaps I should have a separate Emacs laptop and put it in a time lock vault! Yeah! That’s the ticket!

But I’ll try to keep at it… to get some routine in there, and be able to do this on a regular basis without getting burned out. 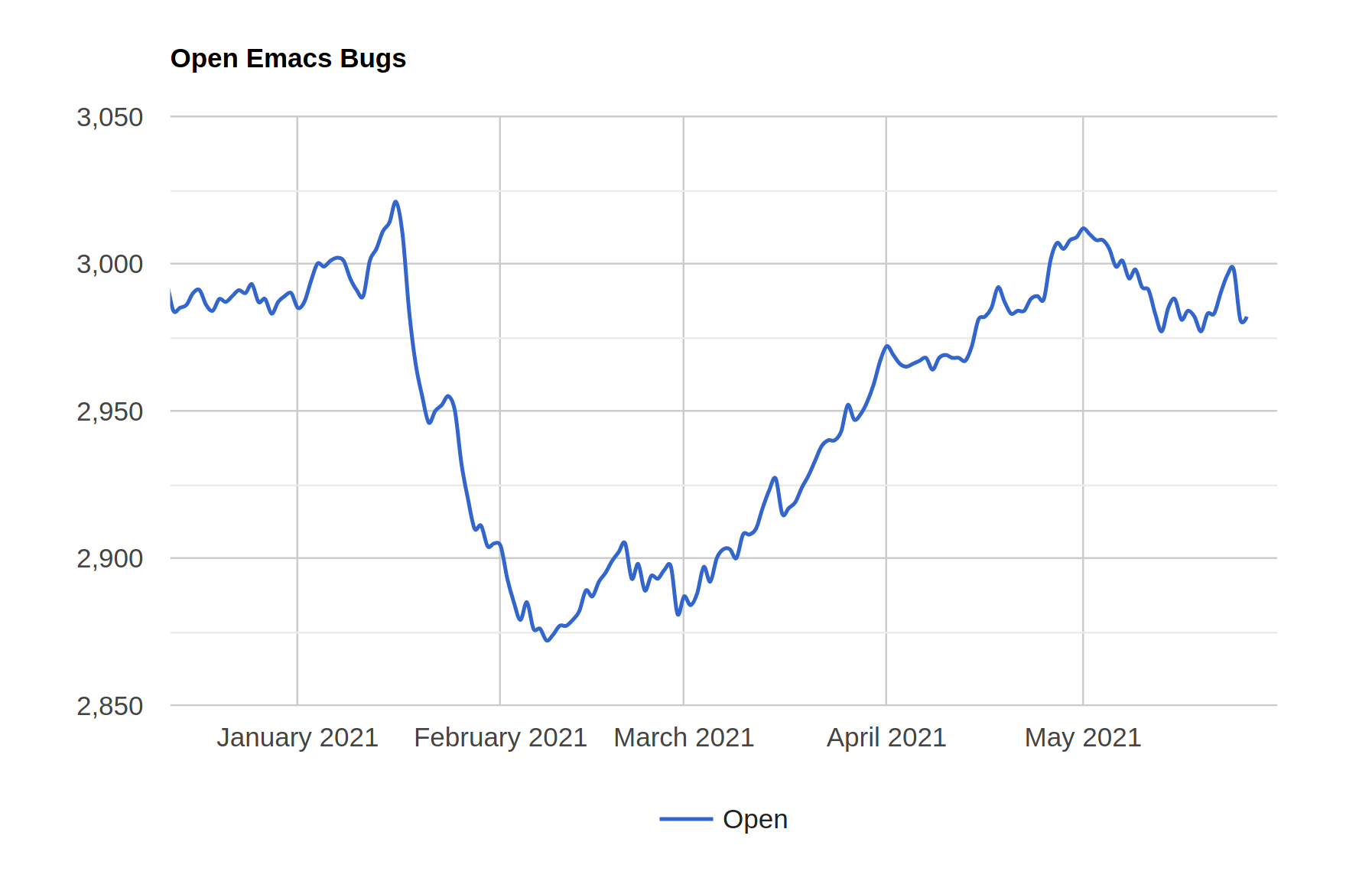 The chart sure seems to like to hover just below 3K.

So, I basically took all of March and April off, and since I got back and started the work-until-recharge methodology, it’s pretty flat.

Well, we’ll see what happens… I think I’ll try to see whether I can get the “work sensibly” thing to stick… but I’ve never been sensible.

The past couple of weeks I’ve concentrated on getting patches sitting in the tracker pushed, so that’s down to 60 again… which is still too many, but reasoning about other people’s patches is kinda exhausting. And it seems like every time we hit 60, we bounce back again. So technical analysis of this chart clearly says that 60 is the natural level of patches to have hanging around.