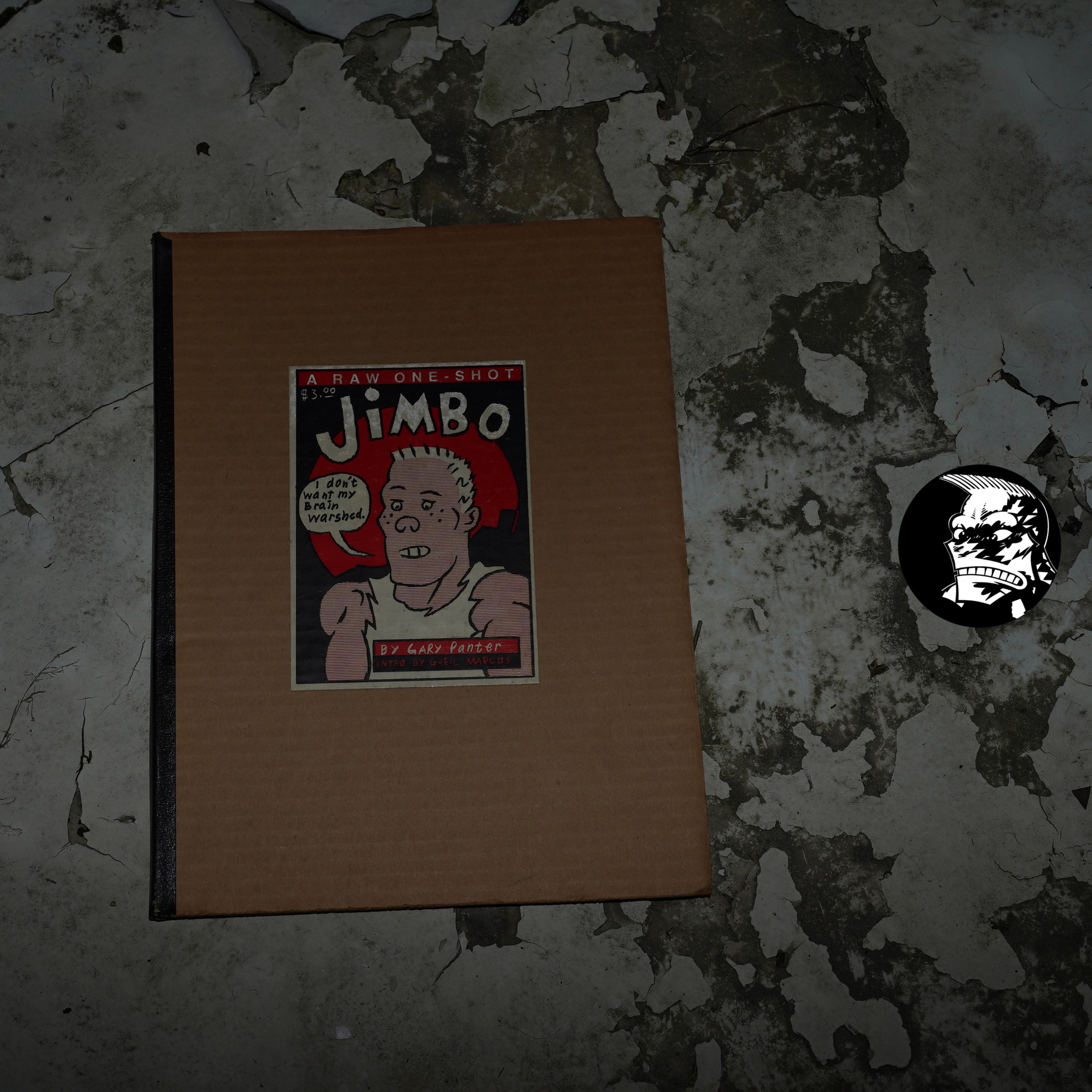 Let’s do a Jimbo mini-series in this blog series: The rest of the week we’ll be looking at various Jimbo permutations.

The cover here is corrugated cardboard with a coloured inlay glued to it. And I guessed by looking at it on the intertubes that it was two pieces of cardboard with gaffa tape as the binding… 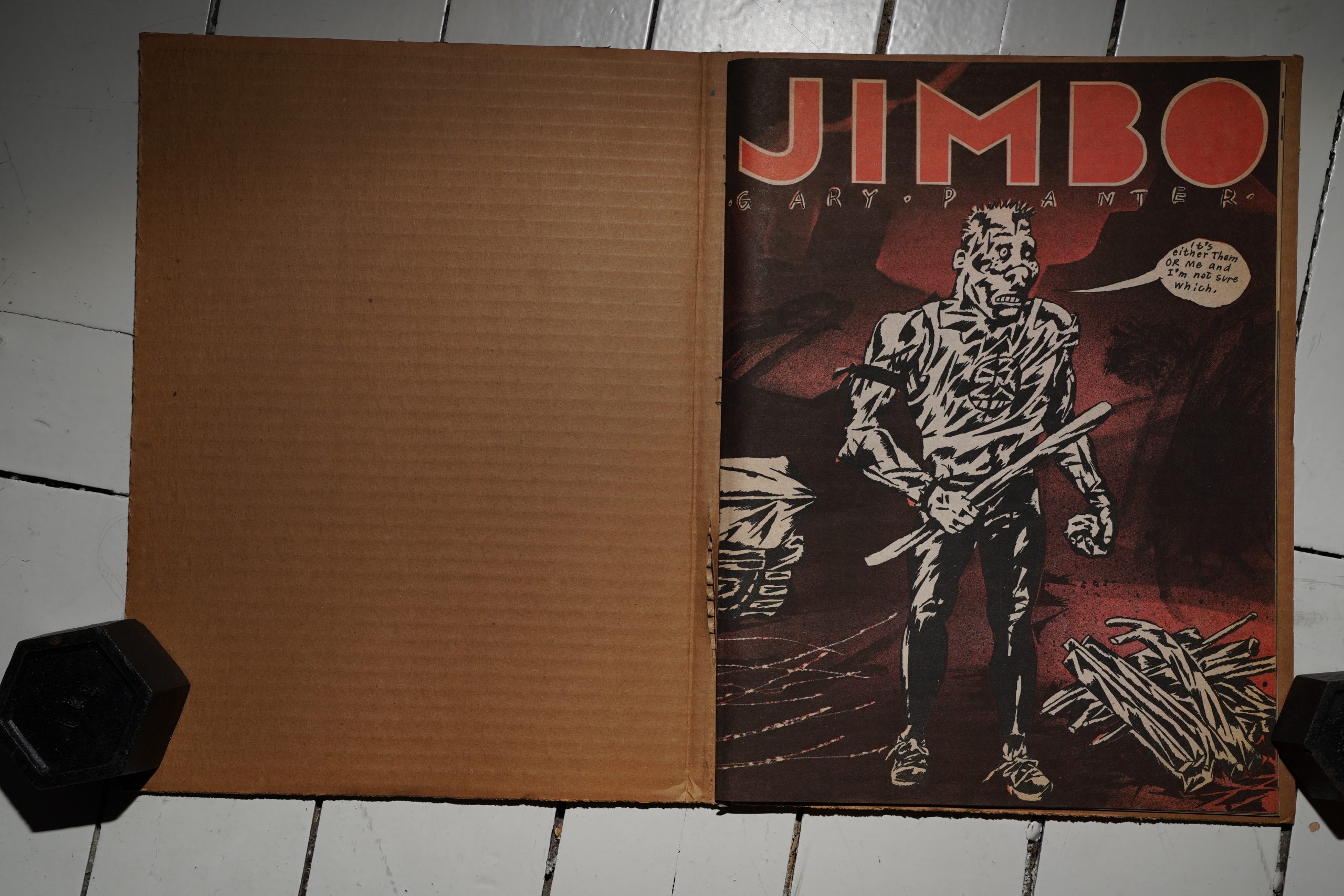 But nope. It’s one solid piece of cardboard that’s been bent into shape. 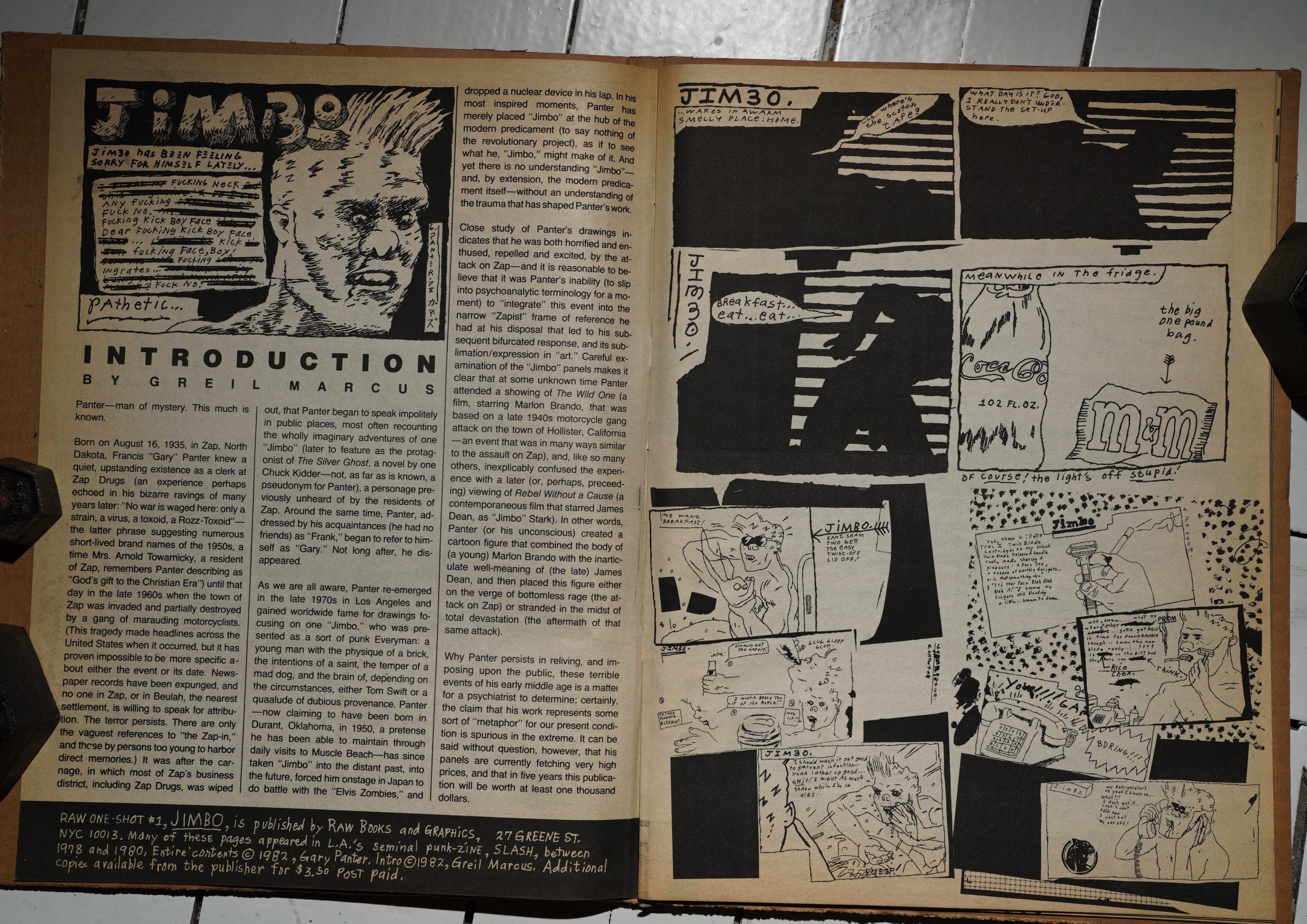 These pages originally ran in Slash magazine, and I’ve tried scoring some copies off of ebay, but has had no luck so far. So I’m guessing punk music nostalgia is a huge thing still? Or perhaps no copies survived? In any case, Greil Marcus, the noted music critic, provides the introduction — and is even namechecked on the front cover, so I guess that was a major selling point? 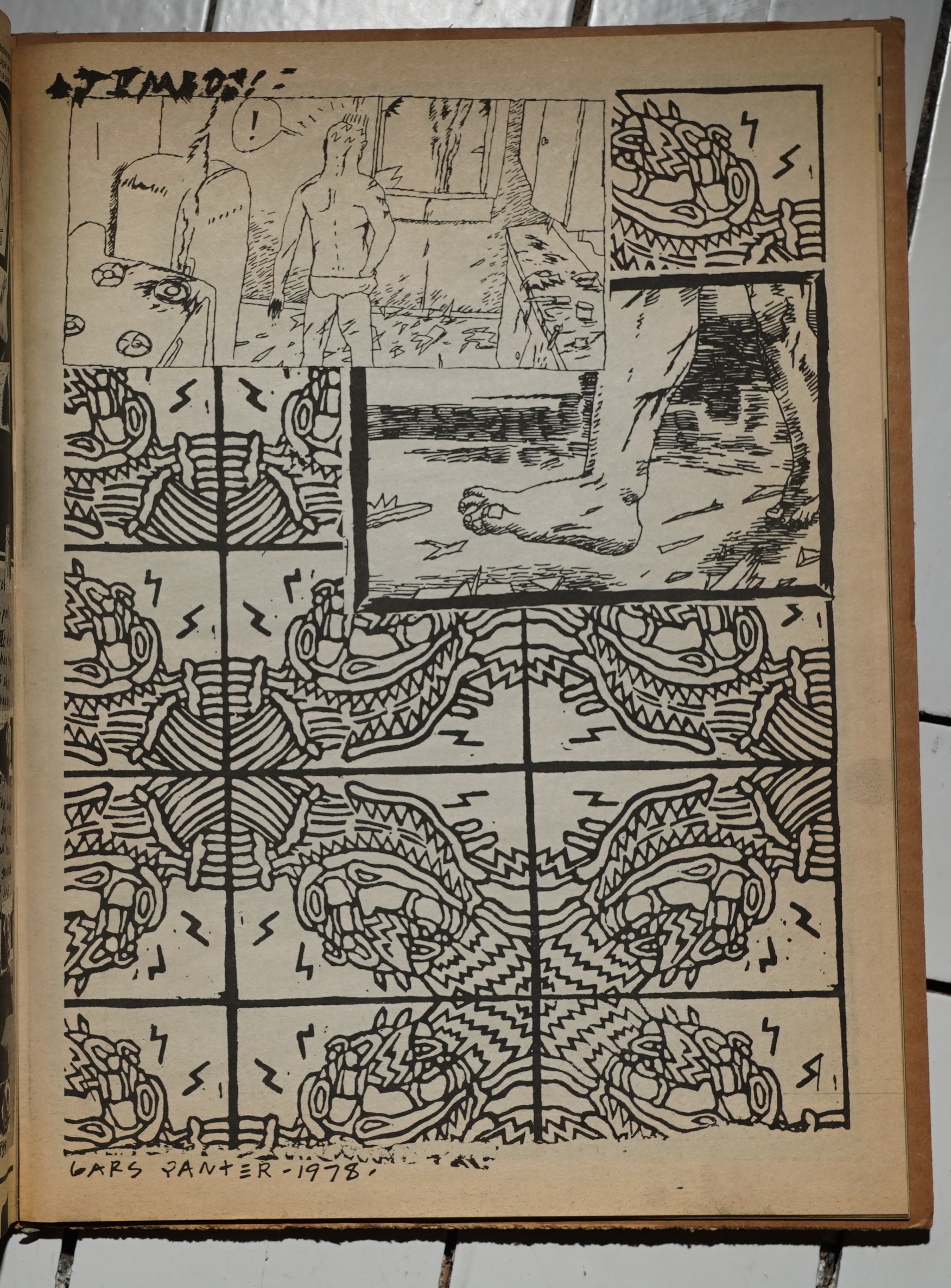 … but it’s not all ratty slapstick. 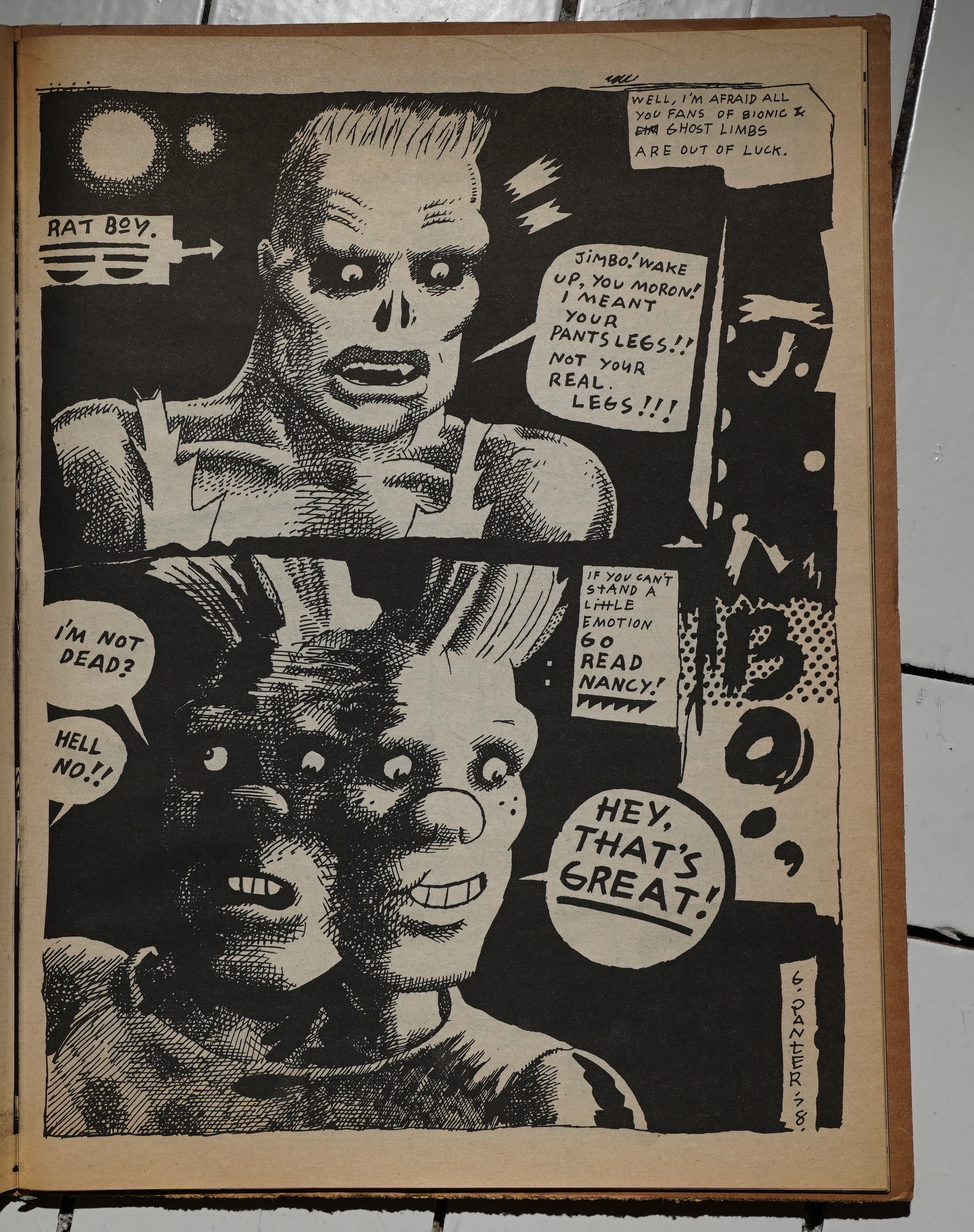 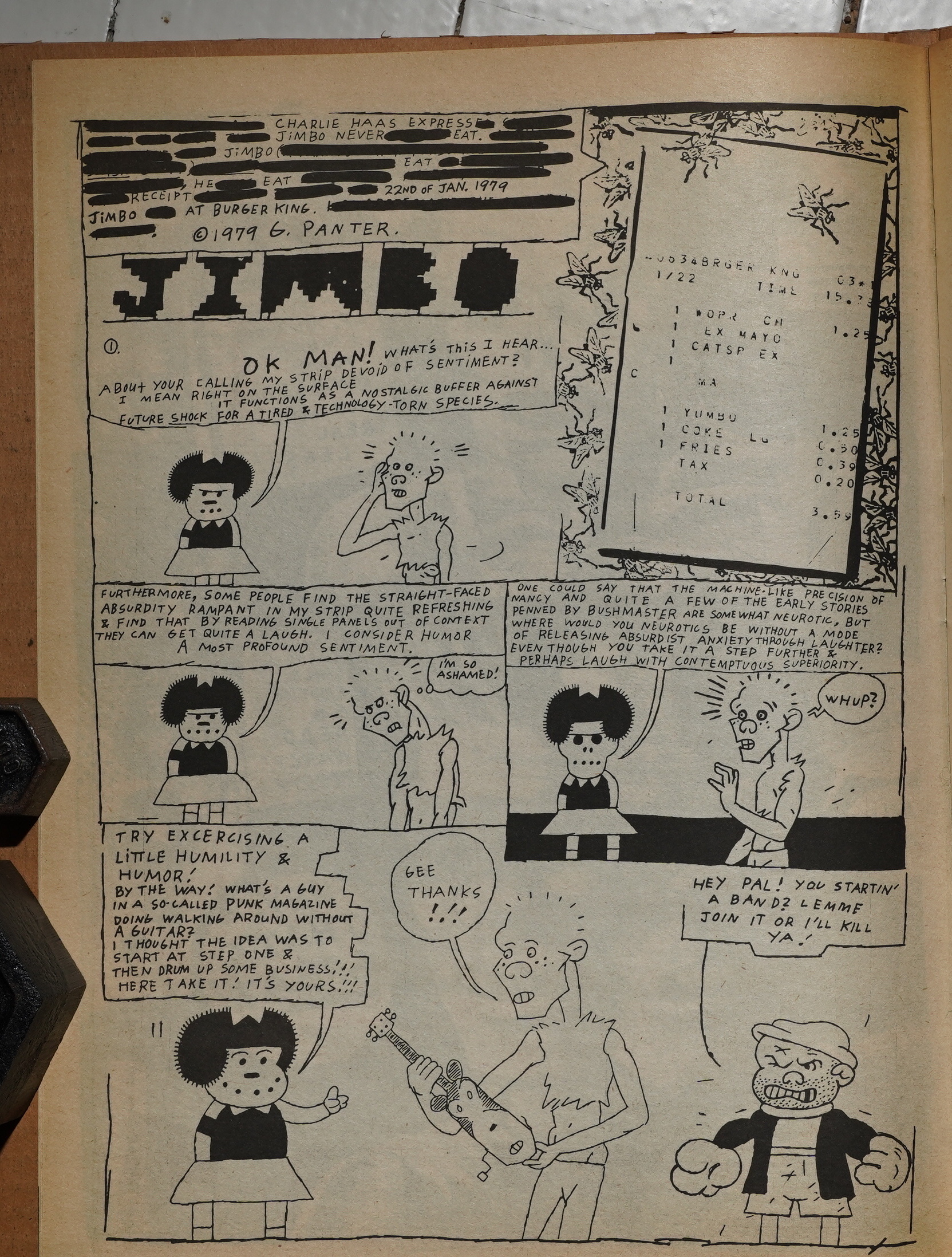 And indeed, the next strip walks the Nancy diss back. 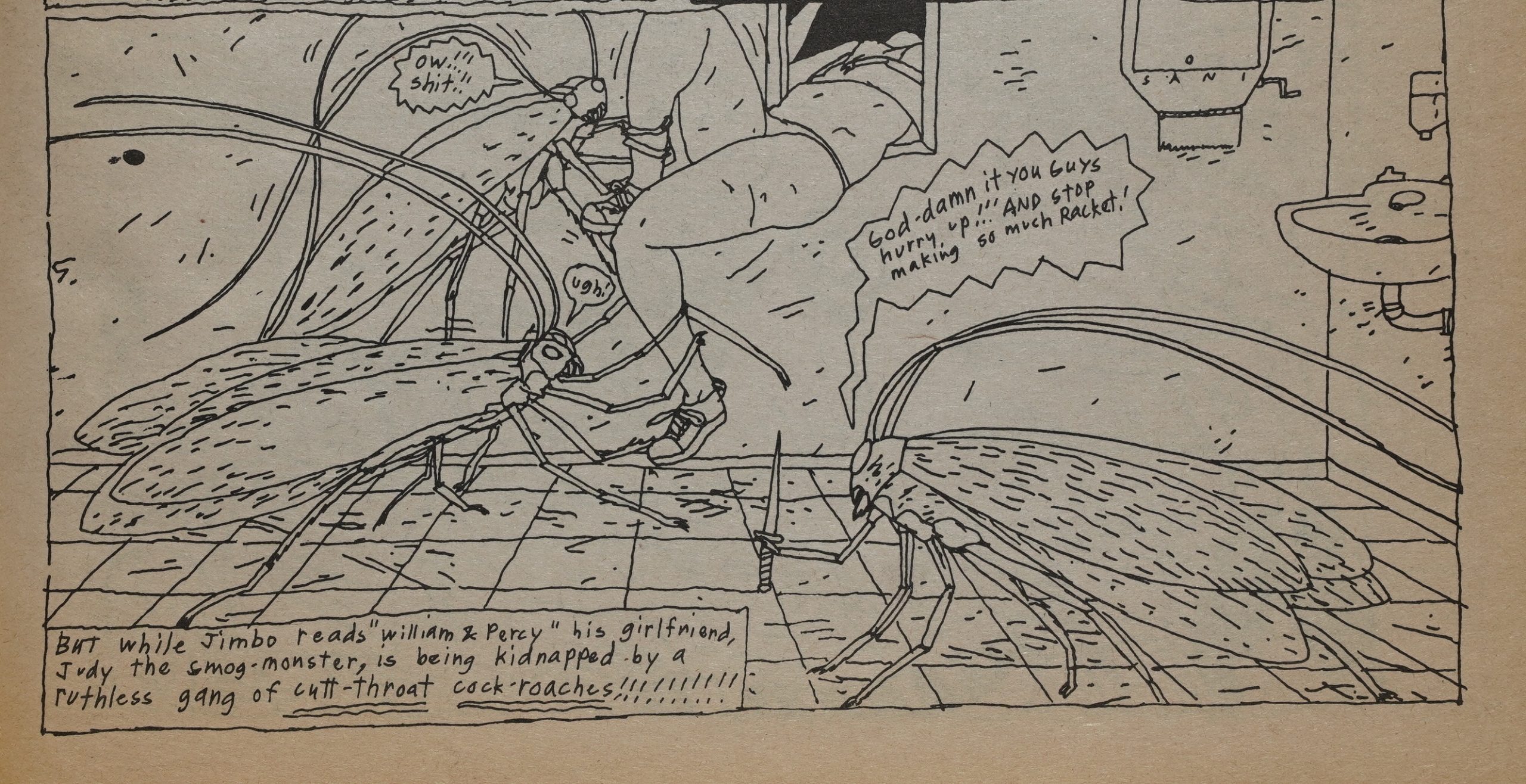 I love the artwork on all these pages, but there’s something just kinda mind-bogglingly amazing about this panel. 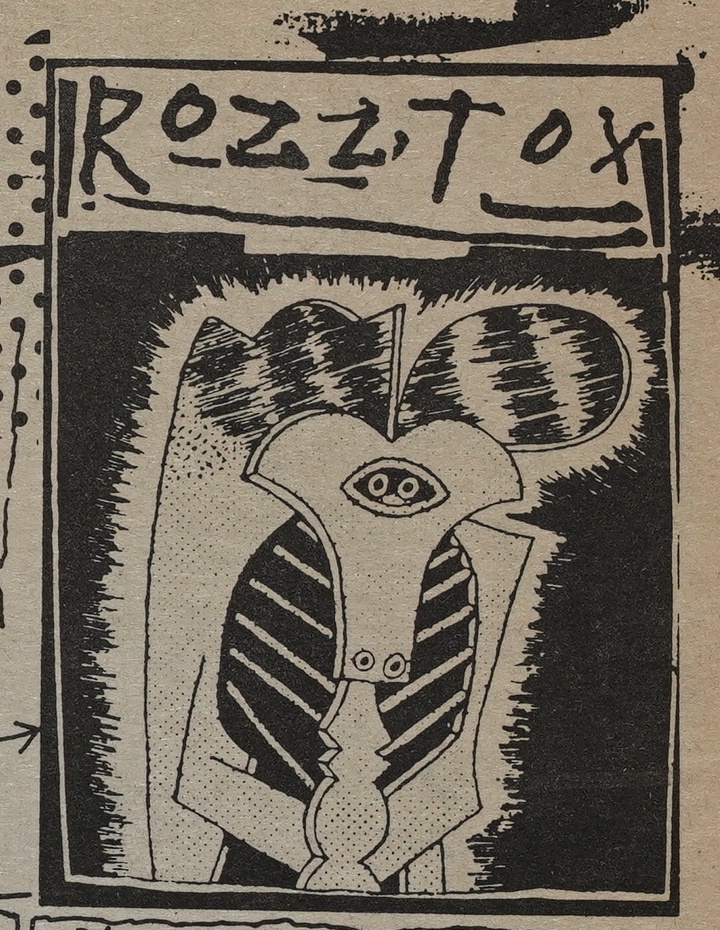 That’s the image that was used on that Rozz Tox manifesto, isn’t it? It sure is. 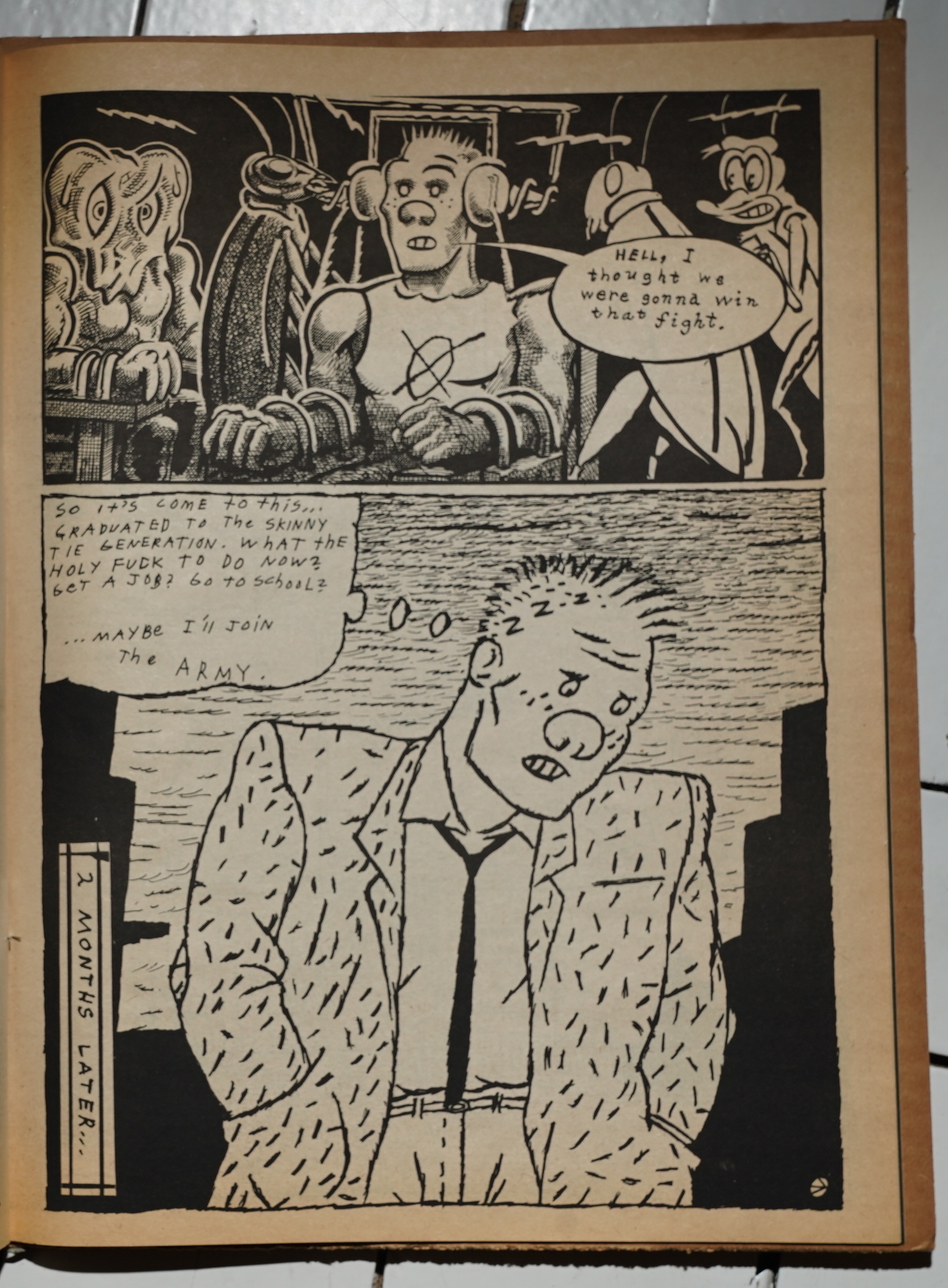 The story here is pretty er slight: Jimbo’s girlfriend is kidnapped, and then Jimbo is brain warshed (sort of), and then a nuclear bomb is set off. Oops spoilers. But it’s a really entertaining read — it’s funny — but it also has a surprising emotional depth. 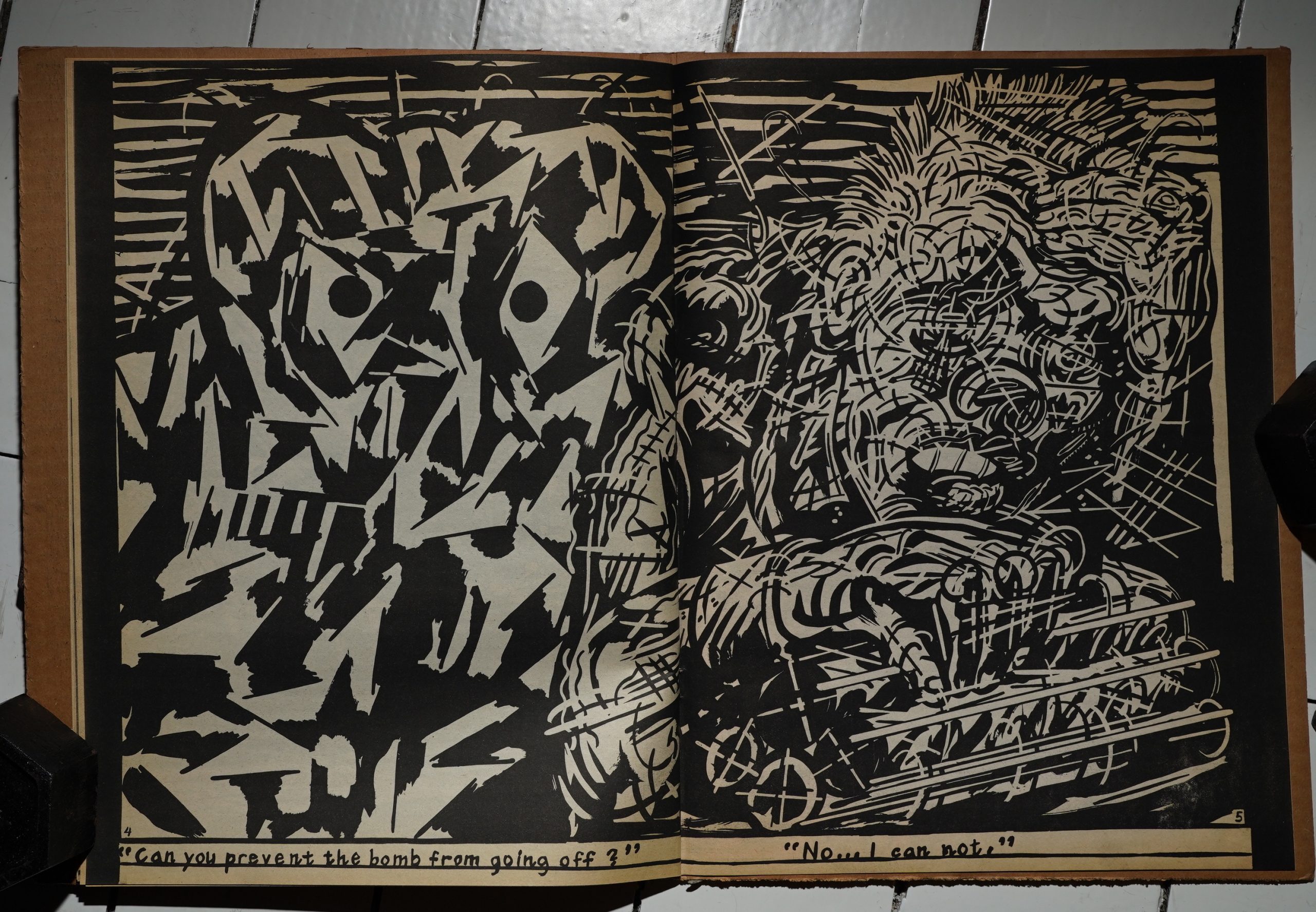 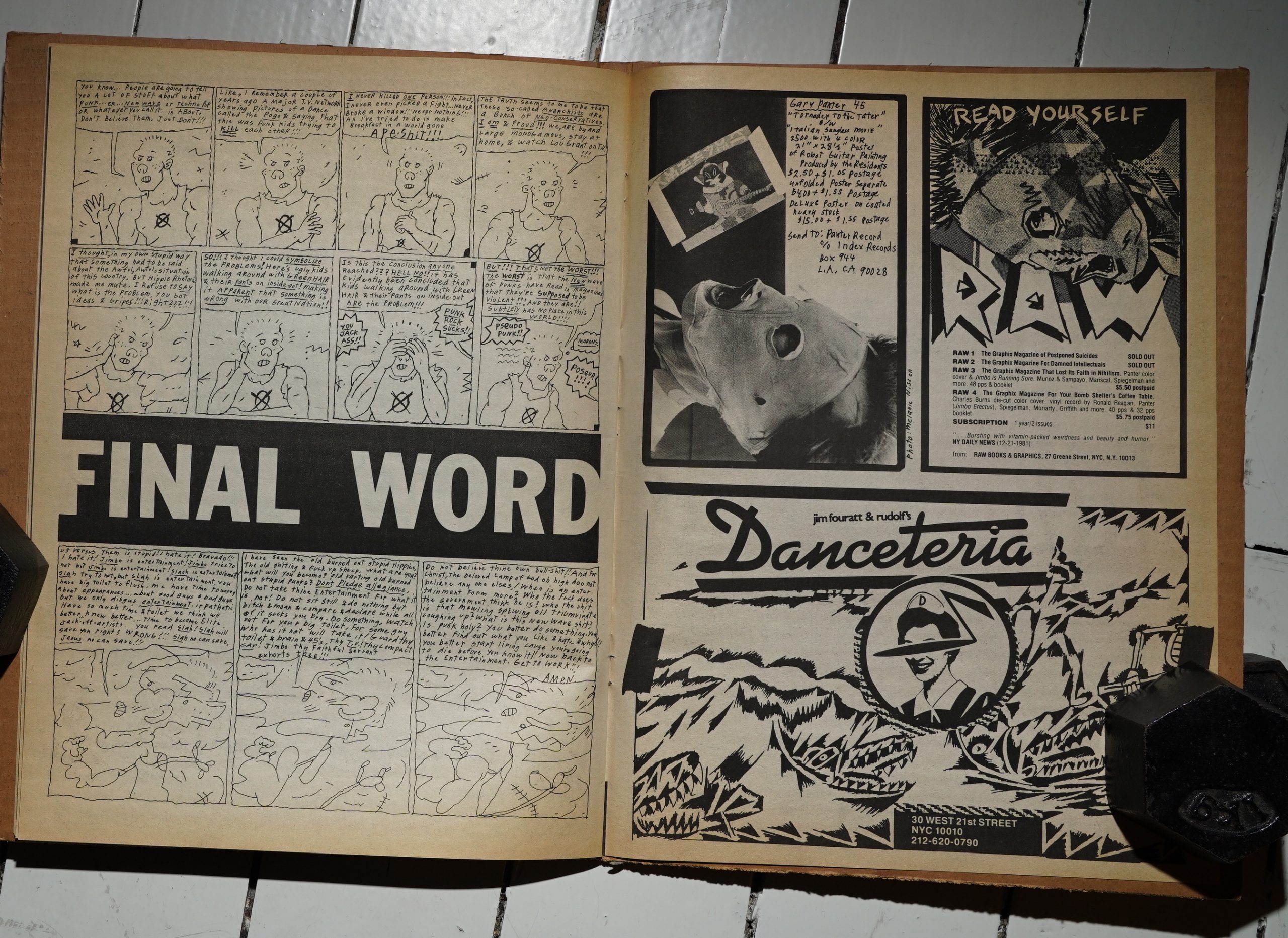 Panter signs off by talking about how punks these days aren’t real punks, but that hippies still suck.

And I love that Danceteria ad.

As an object, this book is such a thrill: Everything about it is totally perfect. Holding it makes my entire brain and body go “wheee”.

Increasing the dosage has served to
remove my reservations about Gary
Panter’s work, as well. “Subtlety has •no
place In, this world!” complains Jimbo ae
the end of the collection Of Panter pages
(Jimbo, Raw One-Shot recently issued
by Raw Books, and it amazes me noQv that I
mistook the first two pieces by Panter •L sgw
CTimb0 is ‘Running Sore”‘ in Raw 3 and
“Freaks’ Amour” in Young Lust as
amples of wilful) ugliness and adolescent
whining masquerading as expressionism:
Panter’s formidable draftsmanship and
design qualities remained invisible to
until I had familiarized myself with the.
range of lettering, breakdown, and inking
techniques (Often used in •combination
with halftone washes, collage elements,
crayon drawing, and zipatone overlays)
displayed to full advantage in khe Jimbo
one-shot, just as Jimbo remained inscru-
table to me as Running Sore until I had
gotten to know him as Jimbo.
This seems an appropriate place to men-
tion that the Jimbo one-shot is th*ltimate.
gift item for the bibliophile on ur list
who also happens to be a connoisseur of
Punkgraphismus: bound in two-ply corru-
gated cardboard and black electric tape,
the large-format (IOV2 X 14″) newsprint.
guts do ample justice to Panter’s linear and
tonal subtleties and are a stunning ex-
ample—a hackneyed phrase, but no other
will do—of Francoise Mouly’s mastery Of
the printer’s art. As for the contents: while
Jimbo thinks aloud and incurs frequent
•personal injury in the course of experiences
with safety razors, kitchen appliances,
girlfriends, mutants, cultists, giant
cockroaches, and thermonuclear devices,
Panter cheerfully plunders the world Of art
for stylistic analogs. Everything from
Picasso’s crinkled-tinfoil draperies and syri-
thesized monsterpeople to Sharaku’s bug.
eyed Japanese actors to Jasper Johns’s
obsessive pattern-making and crosshatch-
ing to who’s got a gag for me
today?”) Bushmiller’s equally obsessive
rendering of Nancy’s hair, is grafted onto
Panter’s own funky and abrasive drawing.
style. The resulting hybrid is a plant that
many people will hesitate to talk to, but it
lives.
Greil MarcuS’S description of Panter’s
hero in his” witty introduction to Jimbo
contains a surprising blundeq. The Writer
who began his admirable Mystery Train
with an account of what haÖpened wheri
Little Richard appeared as a guest on the
Dick Cavett show along with John Simon
and Erich Segal surely knows that there is,
by definition, no such creature as a Ypunk
Everyman.” punk Zippy the Pinhead?
would have been ah, the point.