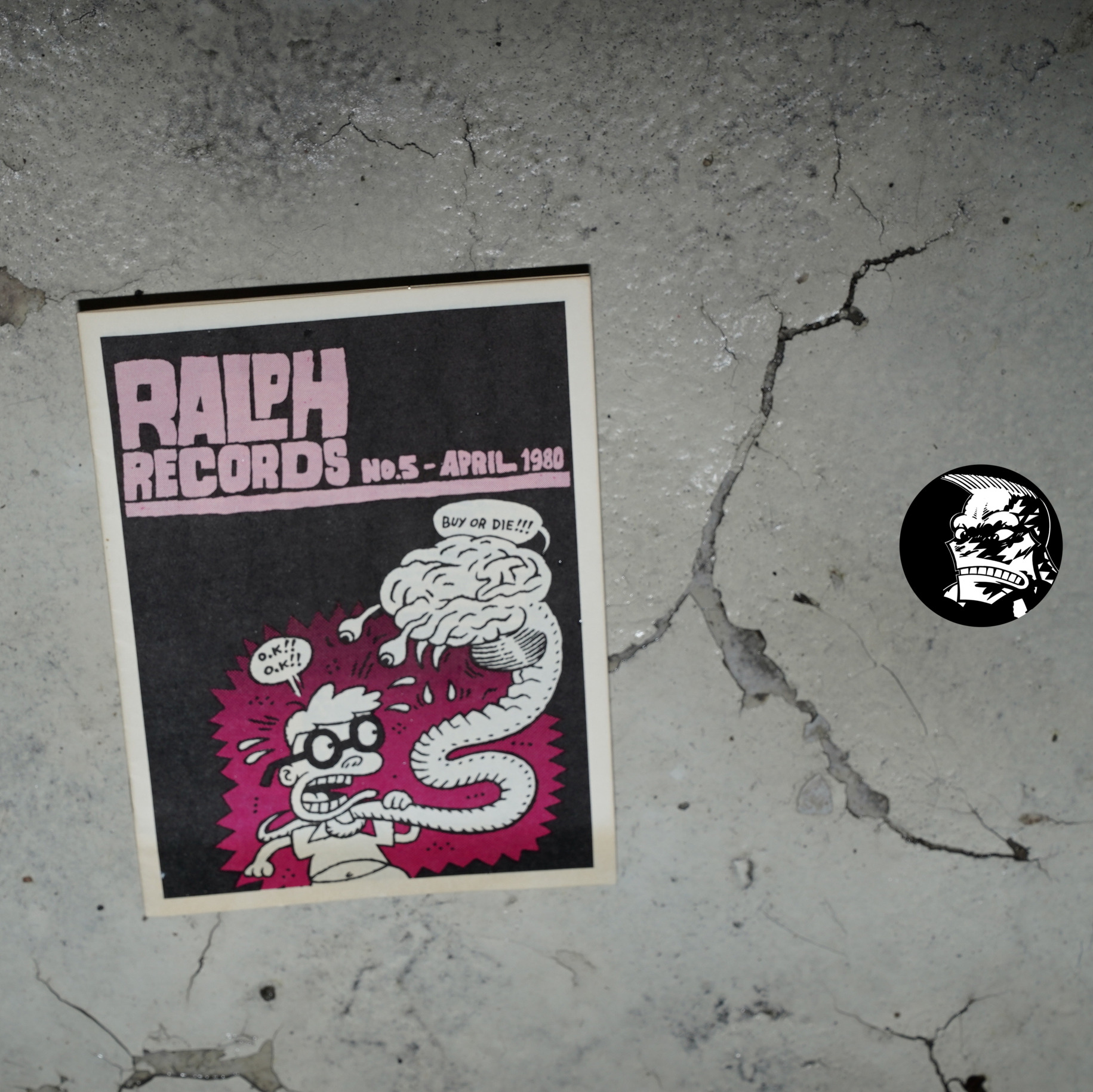 What? Wasn’t this supposed to be a blog series about comics? What’s this then? A record catalogue?

Indeed, because it has this: 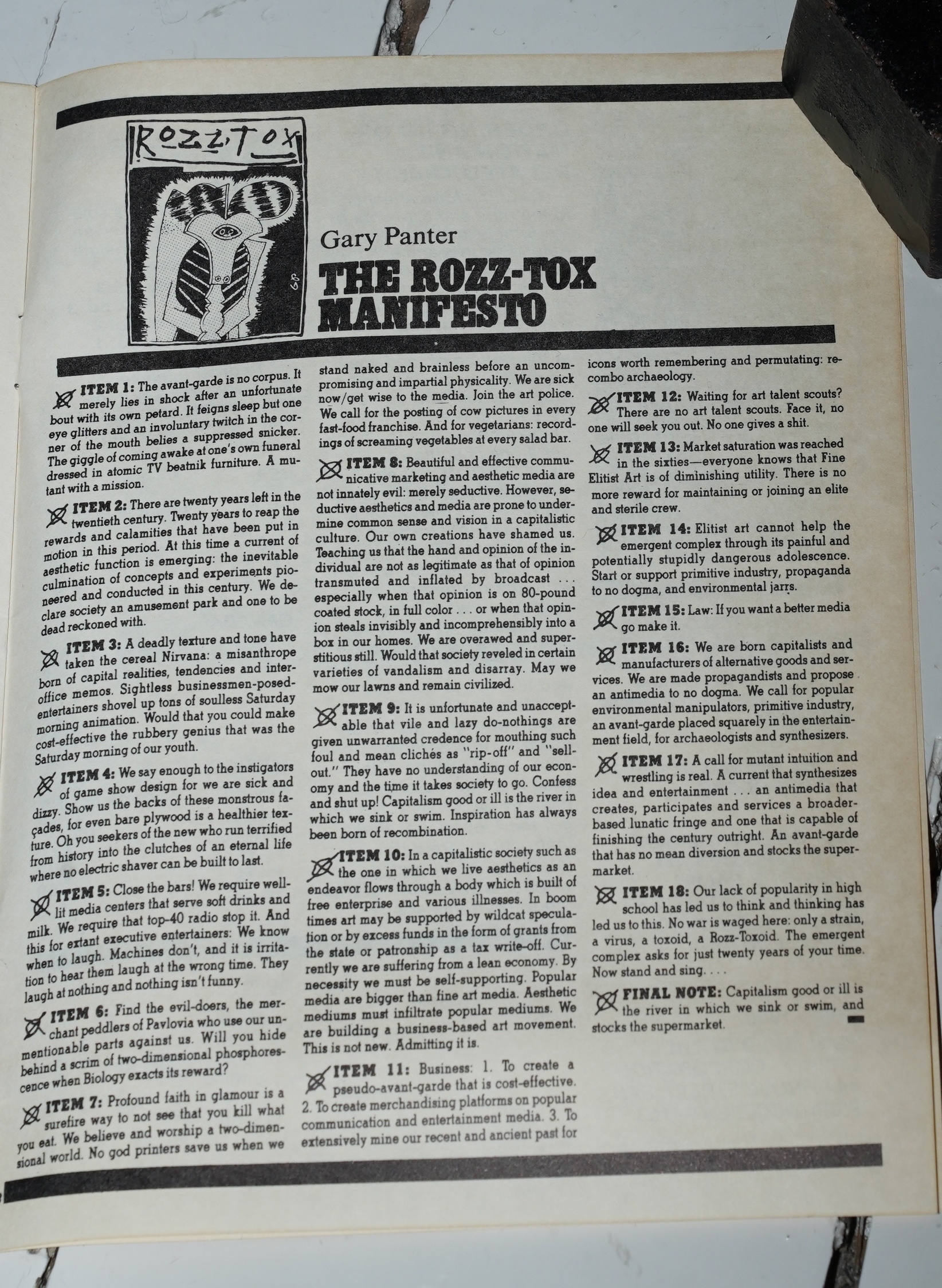 This may or may not be the first place Gary Panter’s manifesto was published. This page, for instance, says that it was published in New West Magazine, and the snap there is identical to the one here in the Ralph catalogue. So Panter may have sent it around to various publications?

The Rozz Tox manifesto was written in 1979 and run, item by item, in the LA Reader’s free personals, week by week, for free.

Back then getting something set in type cost money. By running it in the Reader, it got set in type for free. Plus people could begin to see it. After all the items ran, I pasted the collected bits of paper onto a sheet of paper, well, actually I used wax. That’s what you did in the 20th century. You had an electric waxer. You waxed it down right after you cut yourself with the Exacto knife.

Once I introduced myself to the owner of one of the most interesting galleries in LA, in those days, and she said that the manifesto was seen as an affront and that galleries thought I didn’t want to show in them. I can see how they could easily get that idea, and shouldn’t be surprised, I guess; yet I thought the tone of the writing, the voice, was so shrill and silly that no one would take it seriously.

This person has tried to establish the publication history, but hasn’t been able to verify what Panter’s saying.

Anyway, the reason I’m starting this blog series (looking at punk/art comics of the early 80s) with this post isn’t because this manifesto is something that unifies (or even informs) the artists I’m going to be reading. But reading interviews at the time, it seems that quite a few people were aware of the manifesto, and some were indeed inspired by it.

Or, perhaps, felt like it offered a new way of thinking about the avant garde:

It is unfortunate and unacceptable what vile and lazy do-nothings are given unwarranted credence for mouthing such foul and mean clichis as “rip-off” and “sell-out.” They have no understanding of our economy and the time it takes society to go. Confess and shut up! Capitalism good or ill is the river in which we sink or swim. Inspiration has always been born of recombination.

It’s a license to infiltrate the media instead of opposing it:

Law: If you want better media, go make it.

And this is pretty apposite in these NFT times:

In boom times art may be supported by wildcat speculation or my excess funds in form of grants from the state or patronship as a tax write-off.

I’ve never understood why some people see artists participating in the NFT hoax thing as a moral compromise? These crypto morons are letting money rain on artists! Don’t put your umbrella up; get some buckets and start collecting. Yes, it’s all a scam, but why shouldn’t the money go to the good people instead of the swindlers for once? Extracting crypto people’s money into the real world is a moral imperative.

It’s probably not a coincidence that many artists/editors in the sphere of Rozz-Tox influence have had such an impact on (popular) culture that they’ve had. Panter himself messed up a generation of kids with his designs for the Pee-Wee Herman show; there’s probably never been an animated TV show that’s as influential as Matt Groening’s Simpsons; Art Spiegelman single-handedly convinced a portion of the general public that comics were a serious art form with Maus; and Françoise Mouly has been a cartoon editor at The New Yorker for quite a while now.

GRTH: I read somewhere that you said your intent
to entertain and subvert.
GROENING: I think you have to entertain people before
you can subvert them. Although, as I’ve gotten older,
the subversion has become questionable. I don’t know if
you change anybody’s mind these days with this kind of
stuff. I think you give comfort to the people you already
agree with.
GROTH: I guess that nus what I wus going to ask you: uåo
or what do yu think you ‘re subverting, or who would you
like to subvert in your cartooning?
GROENING: My goal is just to offer an alternative to the
audience and show them there’s something else out there
than the mainstream trash that they are presented as the
only thing. It’s an egotistical assumption that what I have
to say is of value, but I like to make myself part of the
marketplace.
There is an assumption in the alternative world that
the mainstream world is completely hopeless. When I
moved to Los Angeles in 1977 and hooked up with Gary
mnter, we used to sit in Astroburger on Melrose late at
night and split hamburgers and scheme about invading the
media. Our idea was, rather than considering ourselves
too good or refined or esoteric, to just go ahead and see
what we could do to get our ideas across. This was back
when both of us were lingering in obscurity, me more than
Gary. Gary had had a taste of acclaim. But this was long
before he went on to co-design and win Emmys for Pee
Wée ‘s Playhouse.
I understand that Gary and maybe a few other
artists created an artistic manifesto Of sorts. It sounded
similar to what you were just saying, invading the media.
Do you know anything about that?
GROENING: Exactly. It’s called the Rozz Tox Manifesto.
Gary wrote that by himself in the late ’70s.
GROTH: When you guys were discussing this at the Astro-
burger, did you take into consideration the possibility of
being co-opted by the media? Was that a conéern?
GROENING: We considered it a false obstacle. Any time
you’re involved in a commercial enterprise you’re co-
opted on some level, but ideally you gain something
different on another level. We thought we’d just try and
see how far we could take it. You can always retreat back
to Xeroxed, self-published comic books if it doesn’t
work Out.
I sense that you have a real reluctance to even have
the appearance of being co-opted by a large, faceless
organization.
Yeah, I’ve done everything I could TO avoid it.
GROENING: I think it’s great if you can make your way
in the world that way. But it’s also important not to allow
yourself to be co-opted from the other direction by not
getting the work Out there.
If you’re an avant-garde, independent, obscuge genius
and not one sees your work, you can remain smué in your
bitter superiority because you’re never judged. I can make
that kind of statement because there’s definitely a part of
me which is exactly that. There’s a part of me, every time
I do something else for public consumption, which is
screaming, “No, no, no, don’t do it.”
Invading the media, that means dealing with scary peo-
ple who wear expensive suits and smoke cigars. When
you finally meet them, they’re not that scary. And you
know, the cigars are pretty good, too. [laughs.]

Groening saying he was inspired by the manifesto isn’t surprising… but what about Steve Bissette? Steven Bissette writes in The Comics Journal #137, page 73:

After reading the tran-
script of the Interview, Rick Veitch
reminded me of the “Rozz-Tox Manifesto,”
a document drawn up by Gary panter In
1979 that was publlshød In a Ralph
Records catalog. It was an artlstlc manl—
festo I was fascinated by: a Xerox Of It WAS
tacked up over my drawing board for
years. In a nutshell, the manifesto was a
rallying Cry for artists to Infiltrate and
resurrect the media, at any and all costs.
Whatever the sacrifice, it was necessary
to work through the media or pop
culture In order to awaken, enliven,
and/or subvert the creative Inertia that
to dominate the Of the
1970s. For one who found comic books,
the local drive-ins, midnight and
the “new muslc•• more Invigorating than
the sanctioned cultural void, the ROZZ-TOX
Manifesto was definitely compelling. 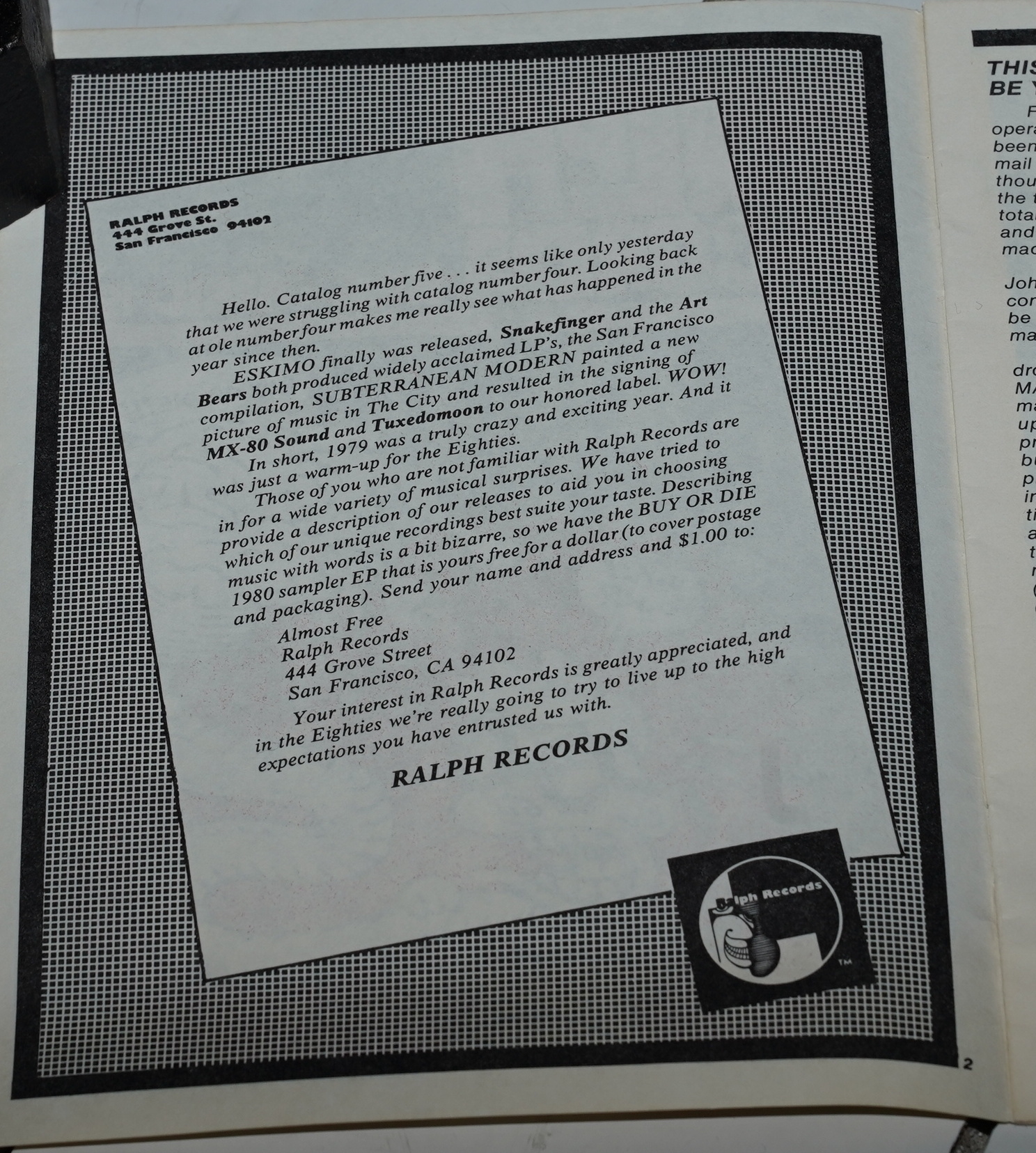 But while we’re here, we might as well take a look at the rest of the catalogue… Oh, right — Ralph Records was run by The Residents. 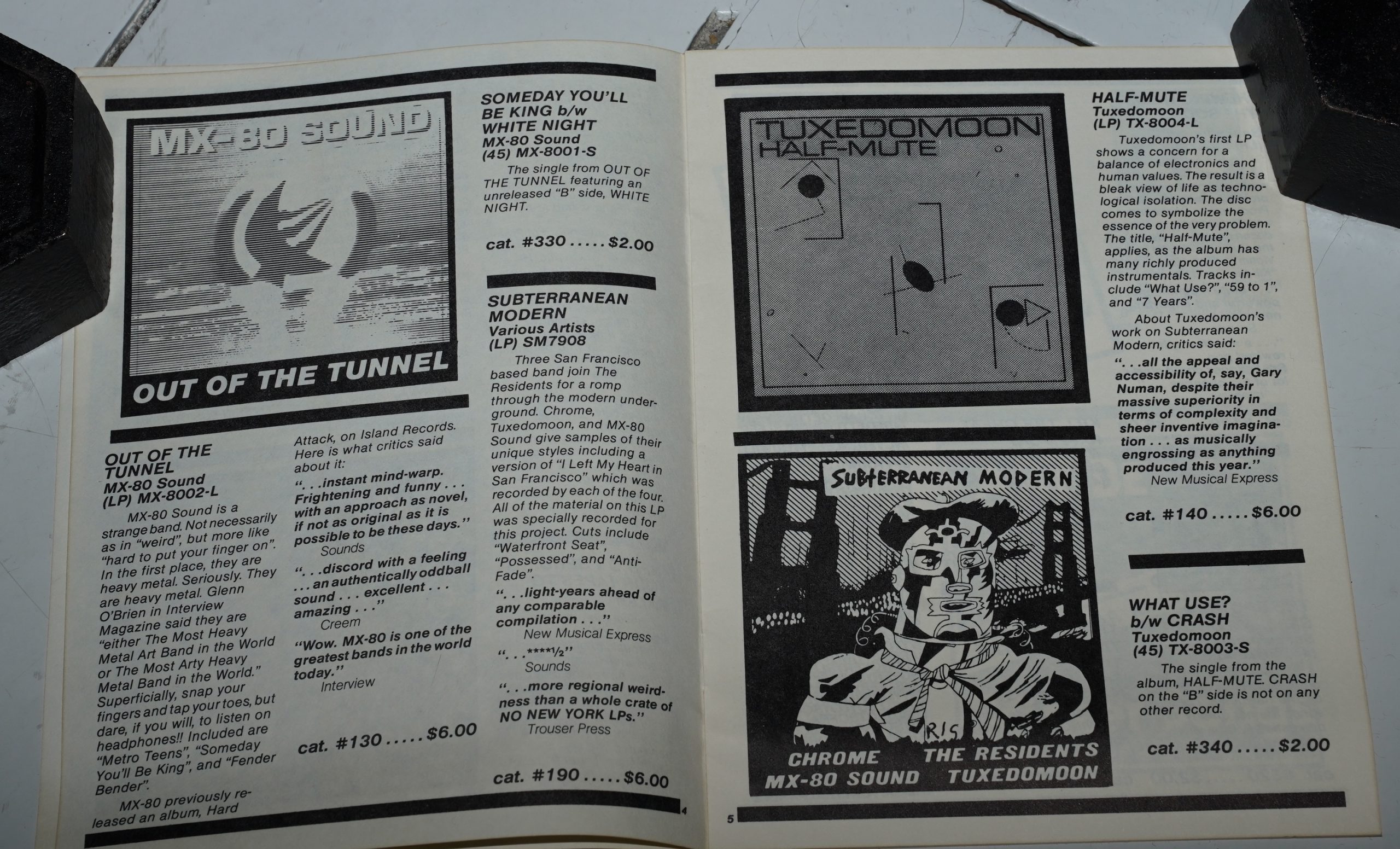 Scarily enough, I’ve got about half of the stuff in this catalogue. It was a great label — not just the Residents, but also Tuxedomoon, Art Bears, Snakefinger… OK, it was a kinda small label.

But I don’t have that Subterranean Modern album! OK, I just made a pit stop at Discogs and scored me a copy. 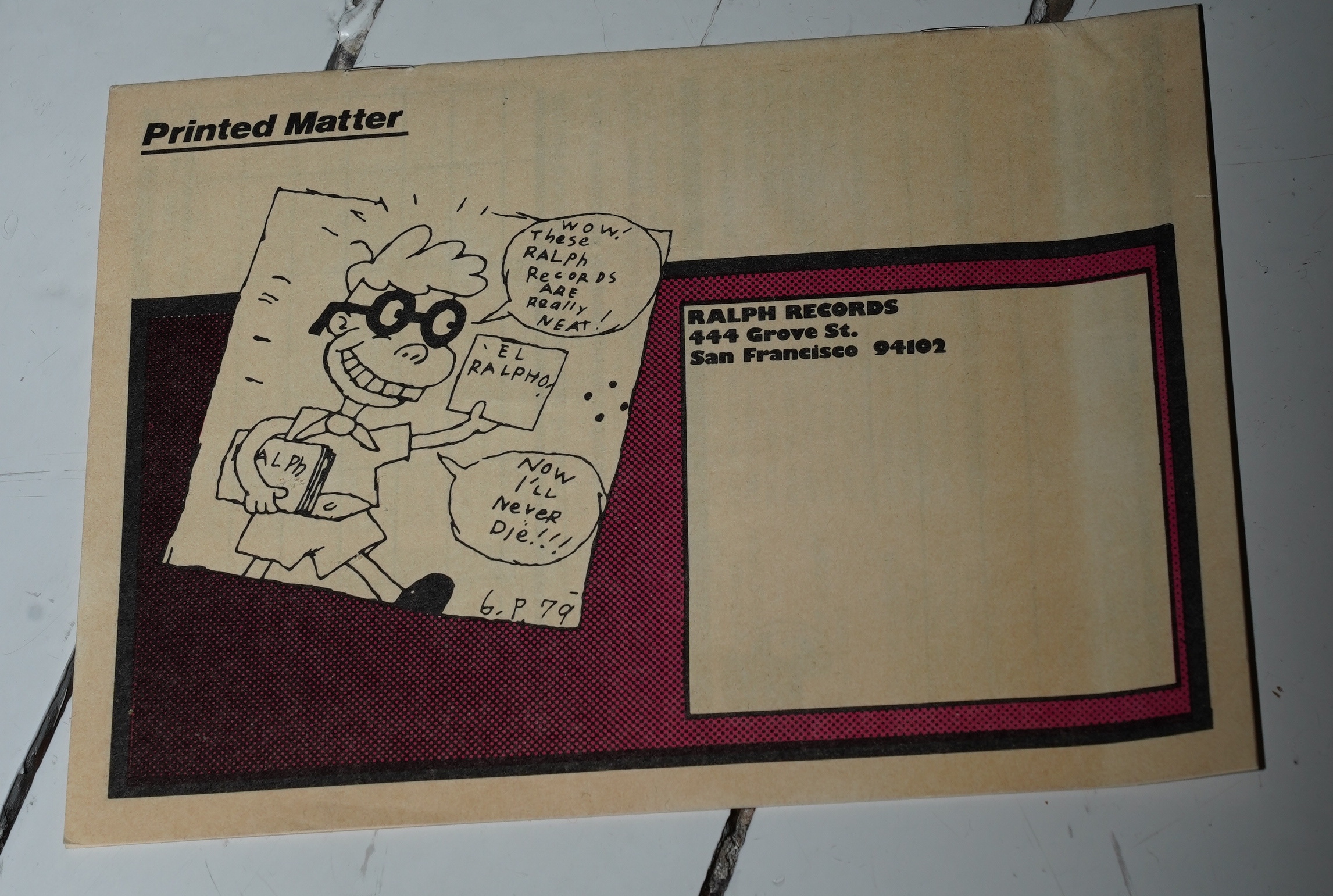