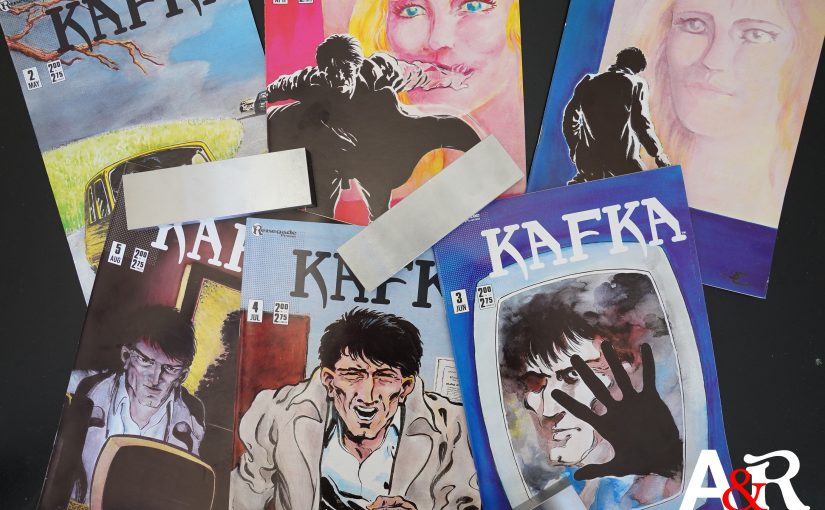 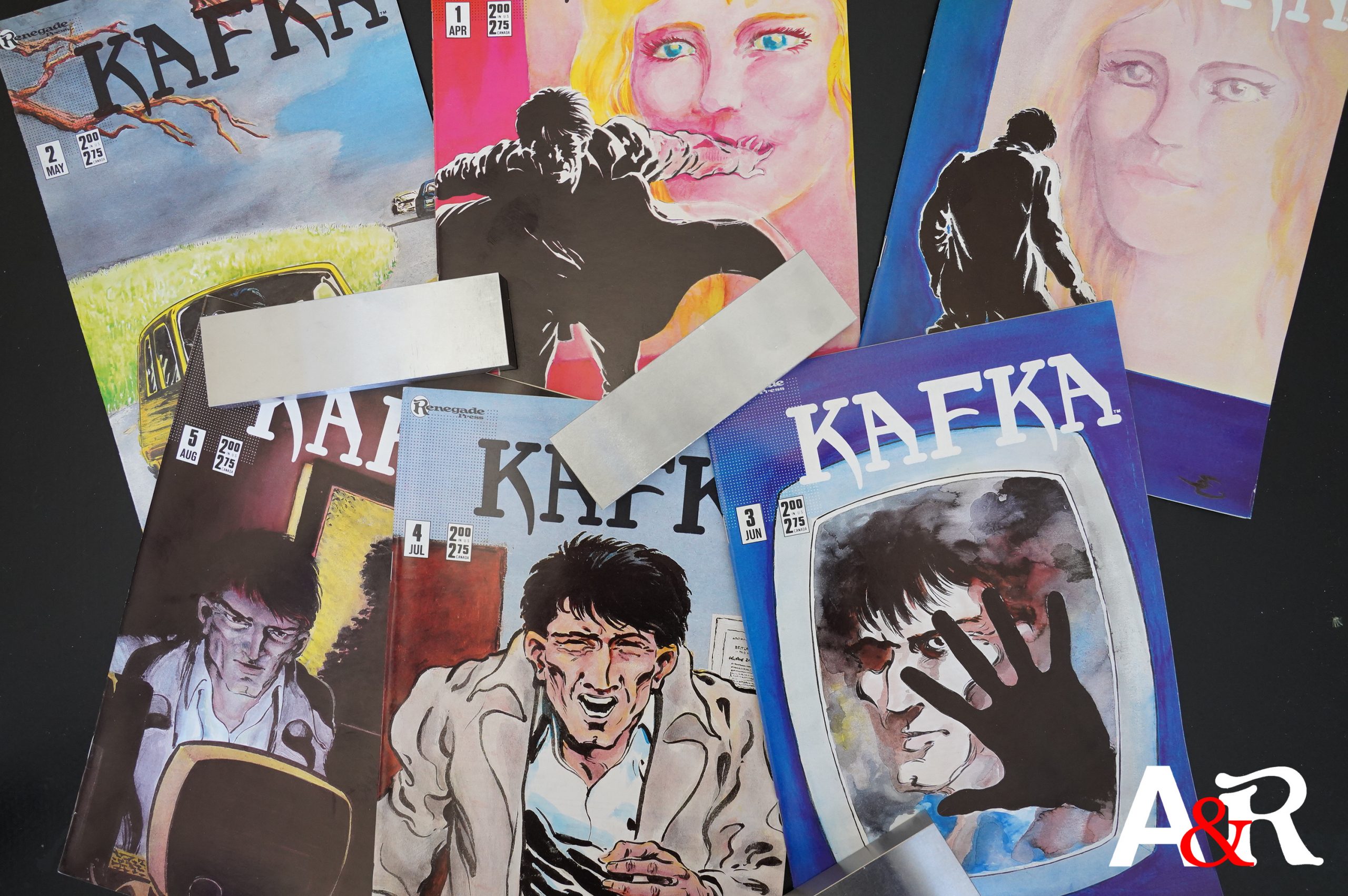 (I will be discussing the plot of this 35 year old comic here (which I usually don’t much), so if you don’t want spoilers, skip this one.)

This was a series I had when I was a teenager — and I remember really liking it, but… that’s all I remember. Let’s read the first few pages: 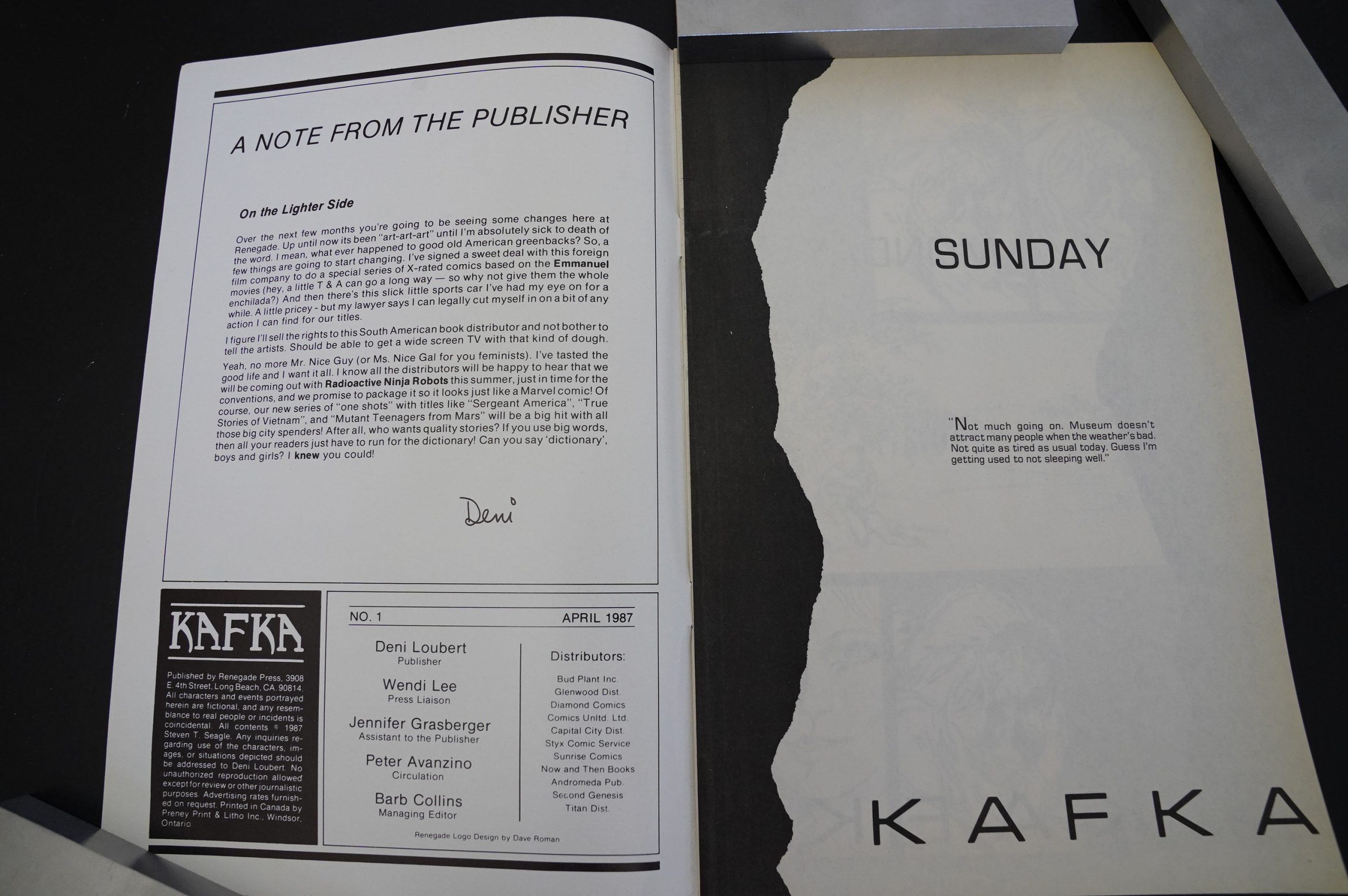 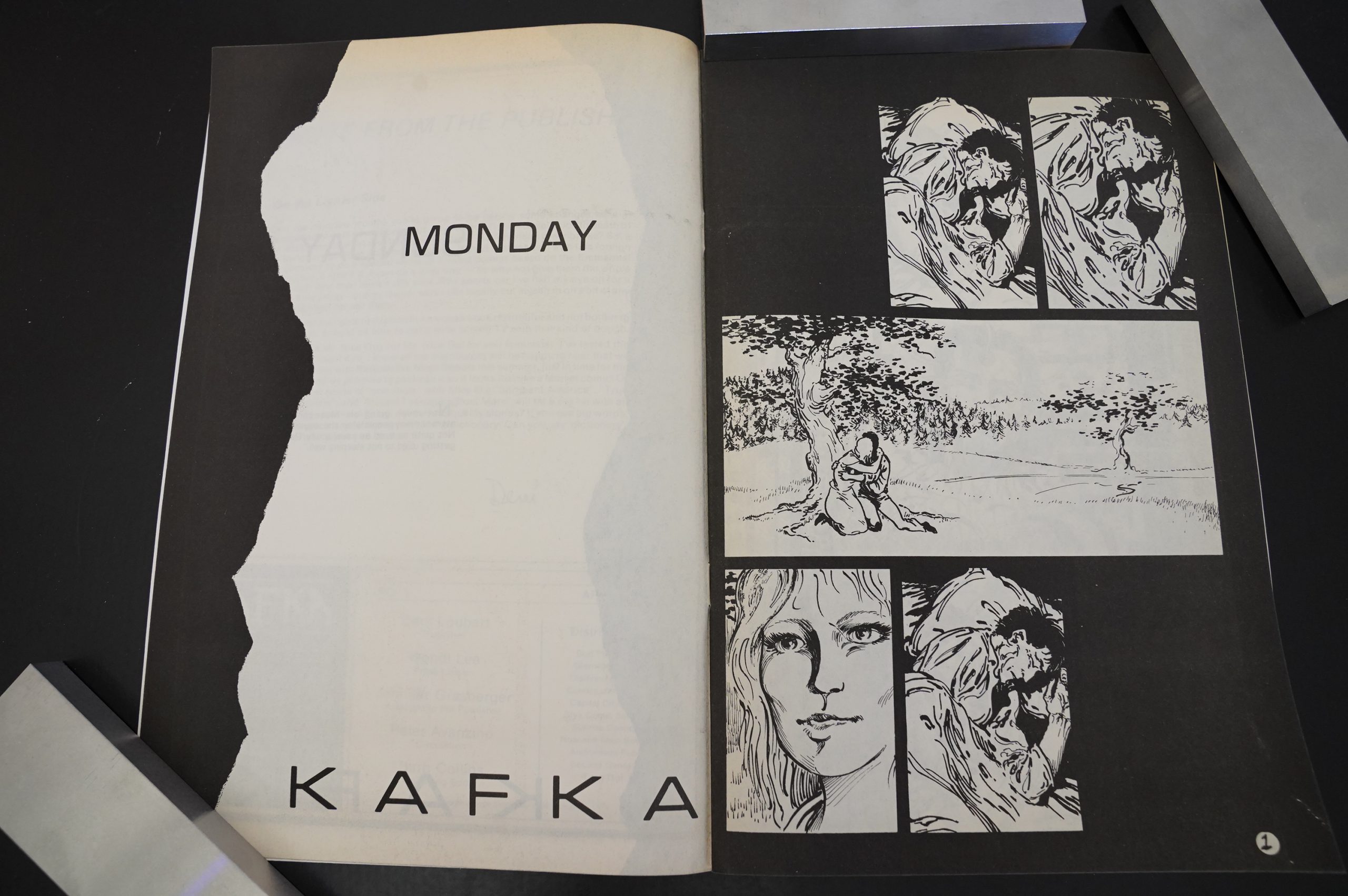 This is during the black and white boom, and it sounds from Deni Loubert’s editorial that it’s starting to bust, right?

Anyway, we seem to be off to a very moody start… 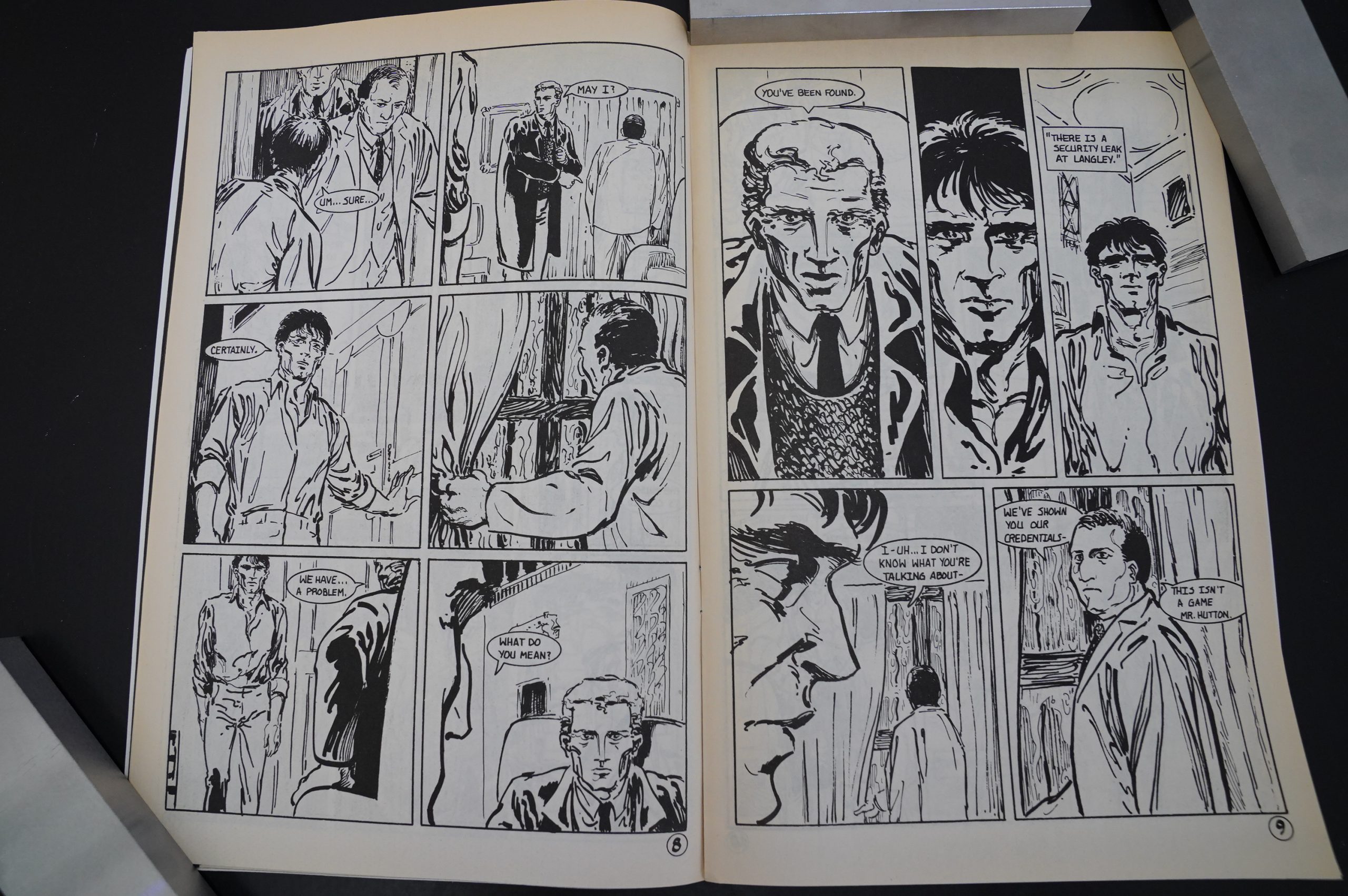 … involving a guy in a witness protection programme, and things are very mysterious indeed. The artwork is quite rough-hewn, which fits the pacing very well — the storytelling is what they’d call “decompressed” a few years later. That is, things take a lot of pages to happen, with lots of little beats.

I wonder whether the artwork was done only vaguely larger than the printed size — it’s got that organic look to the linework… Can’t find any pages of Kafka on Heritage, though, so I guess it’ll have to remain a guess. 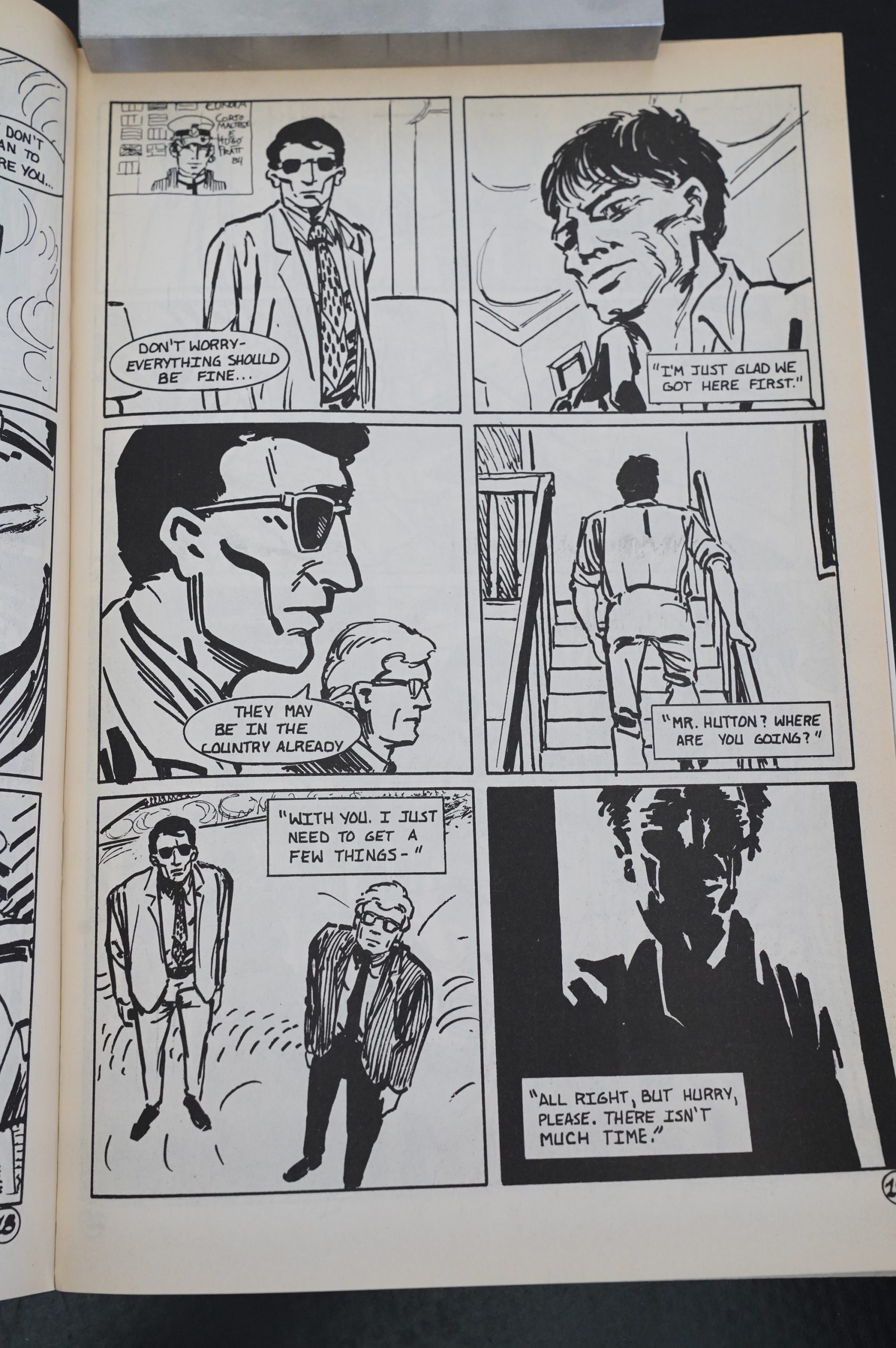 Anyway, I’m totally in: This is so moody and interesting, and it can go in any direction. 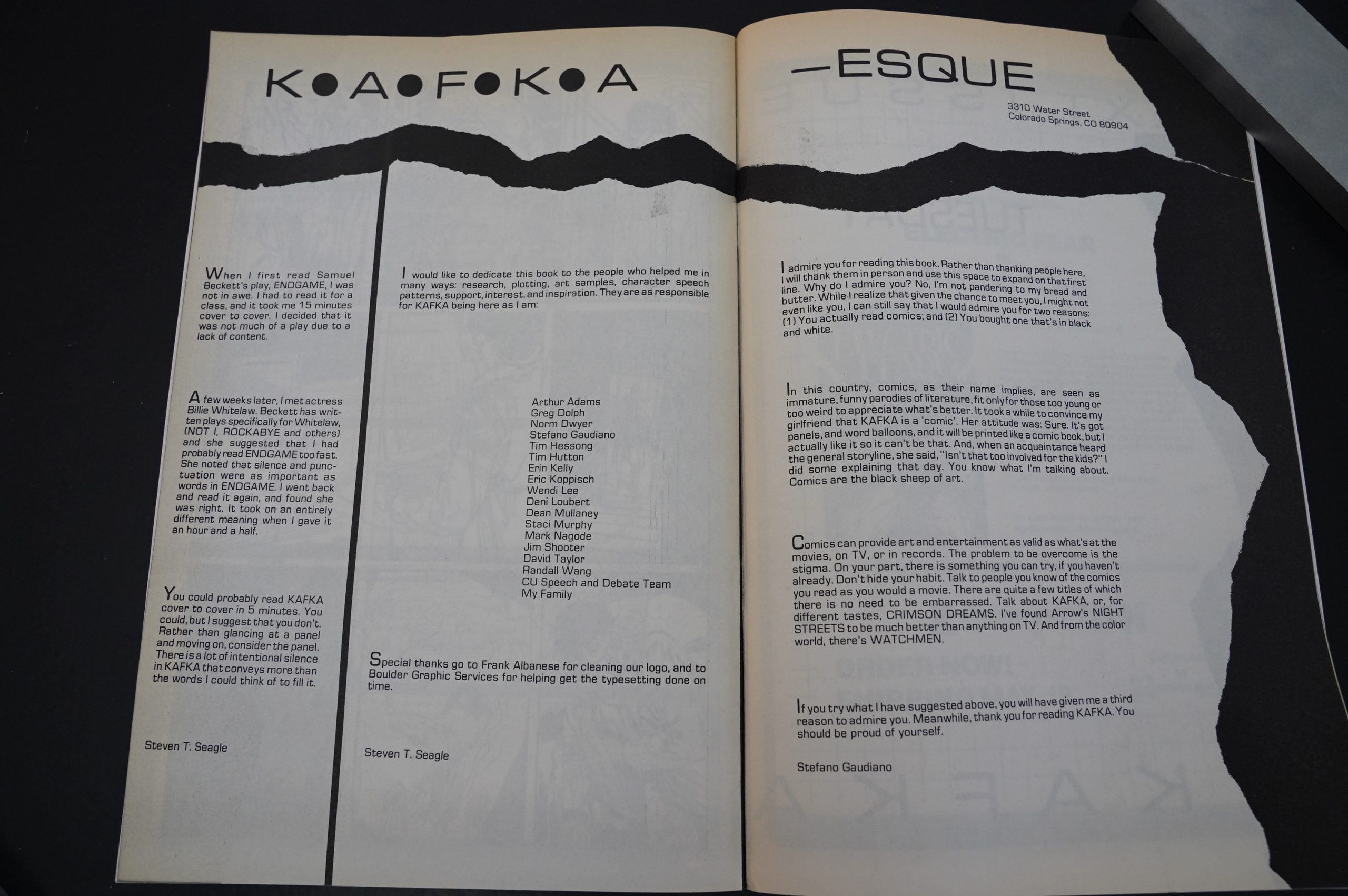 Seagle asks the reader to slow down while reading, even if there isn’t much text on these pages. I think that’s pretty futile: People will read in the tempo set by the pages, and it’s a brisk read. 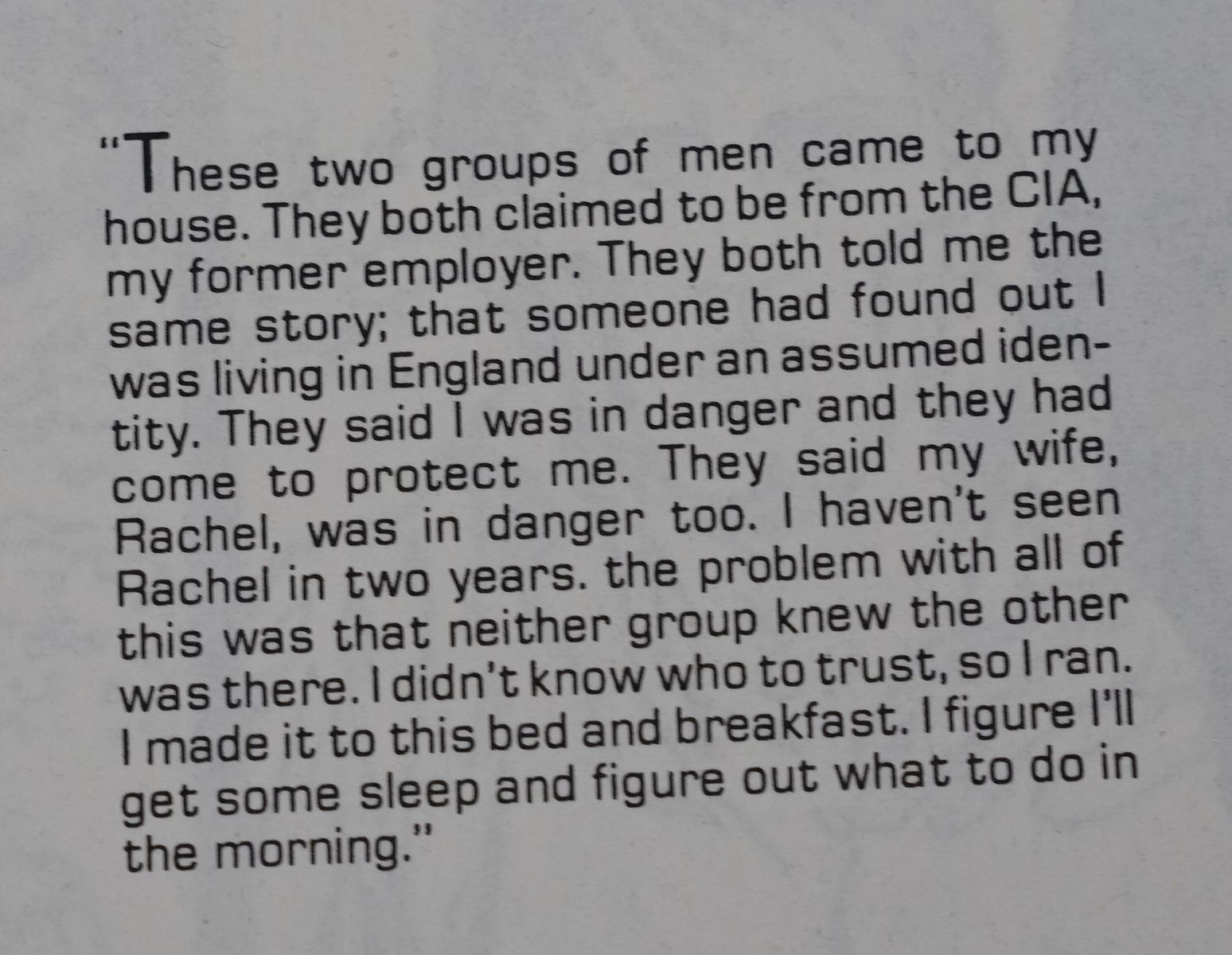 The recap in the second issue takes longer to read than the first issue. 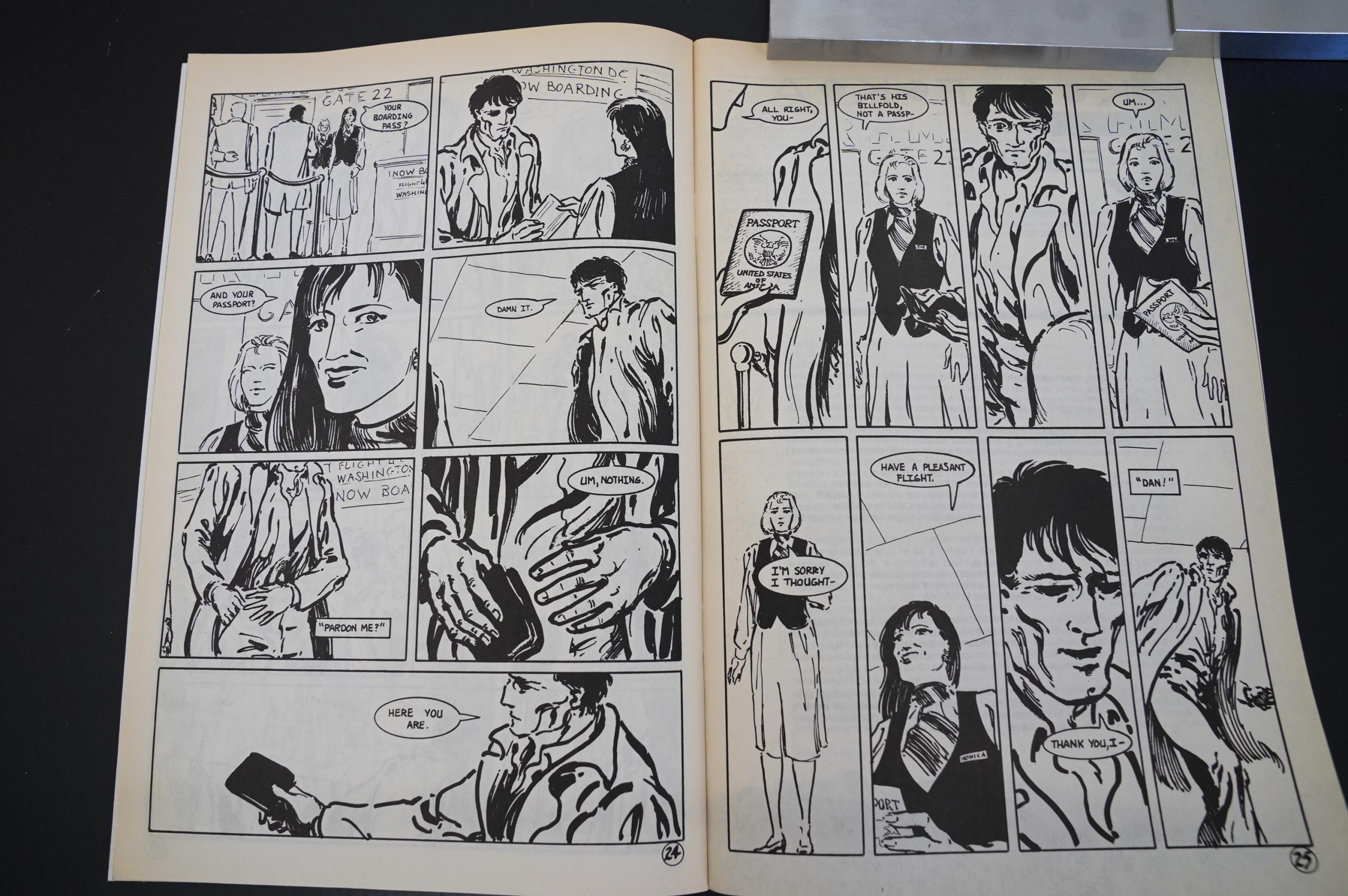 It turns out that the protagonist can cloud people’s minds… yes, kinda like Doctor Who with his special warrant card, but not quite. But the way this is introduced (there’s some in a previous sequence, and then there’s this) feels very fresh: No explanations, it’s just shown. It’s fun! 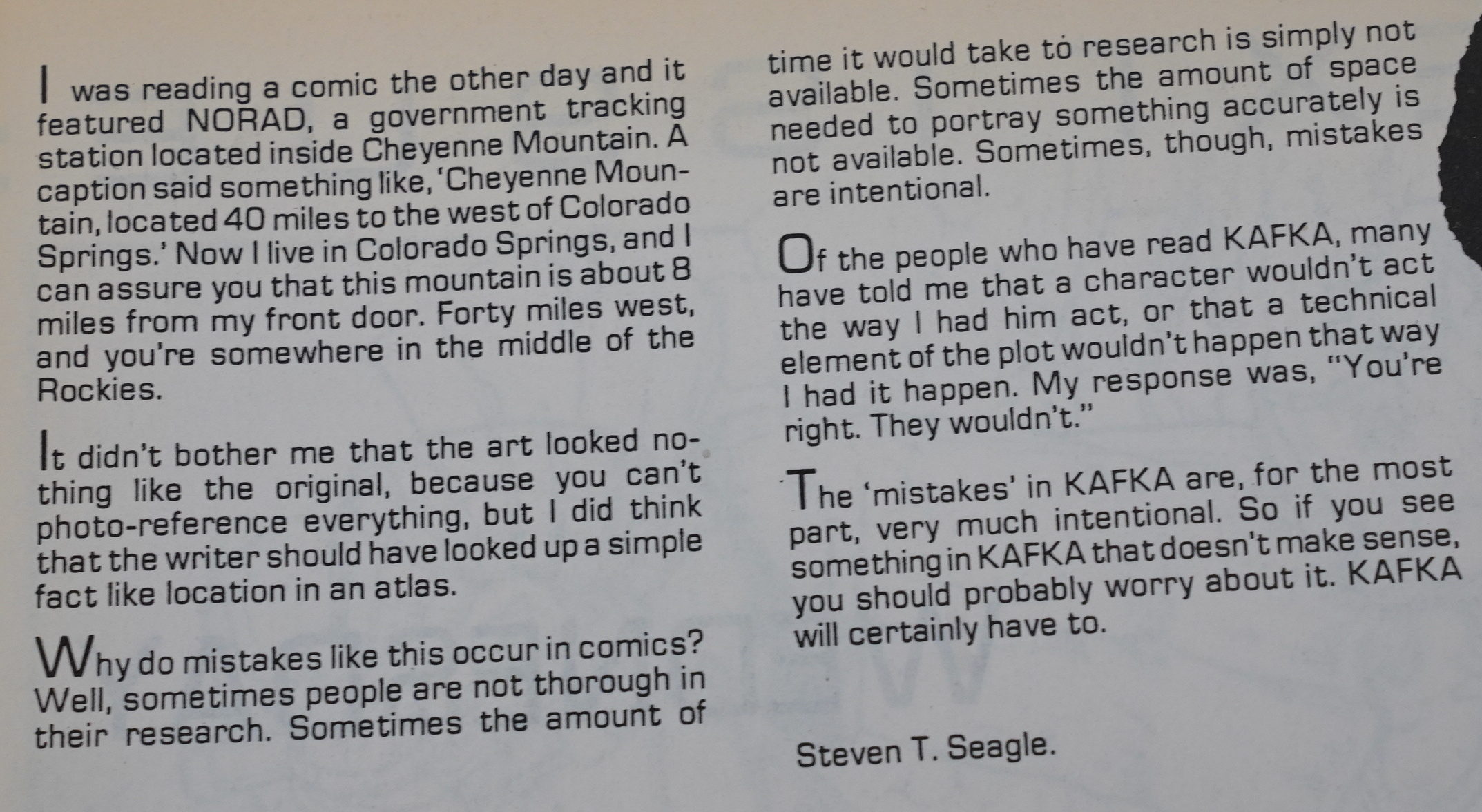 Seagle explains that there are no mistakes in Kafka. He does sound a bit full of himself, doesn’t he? 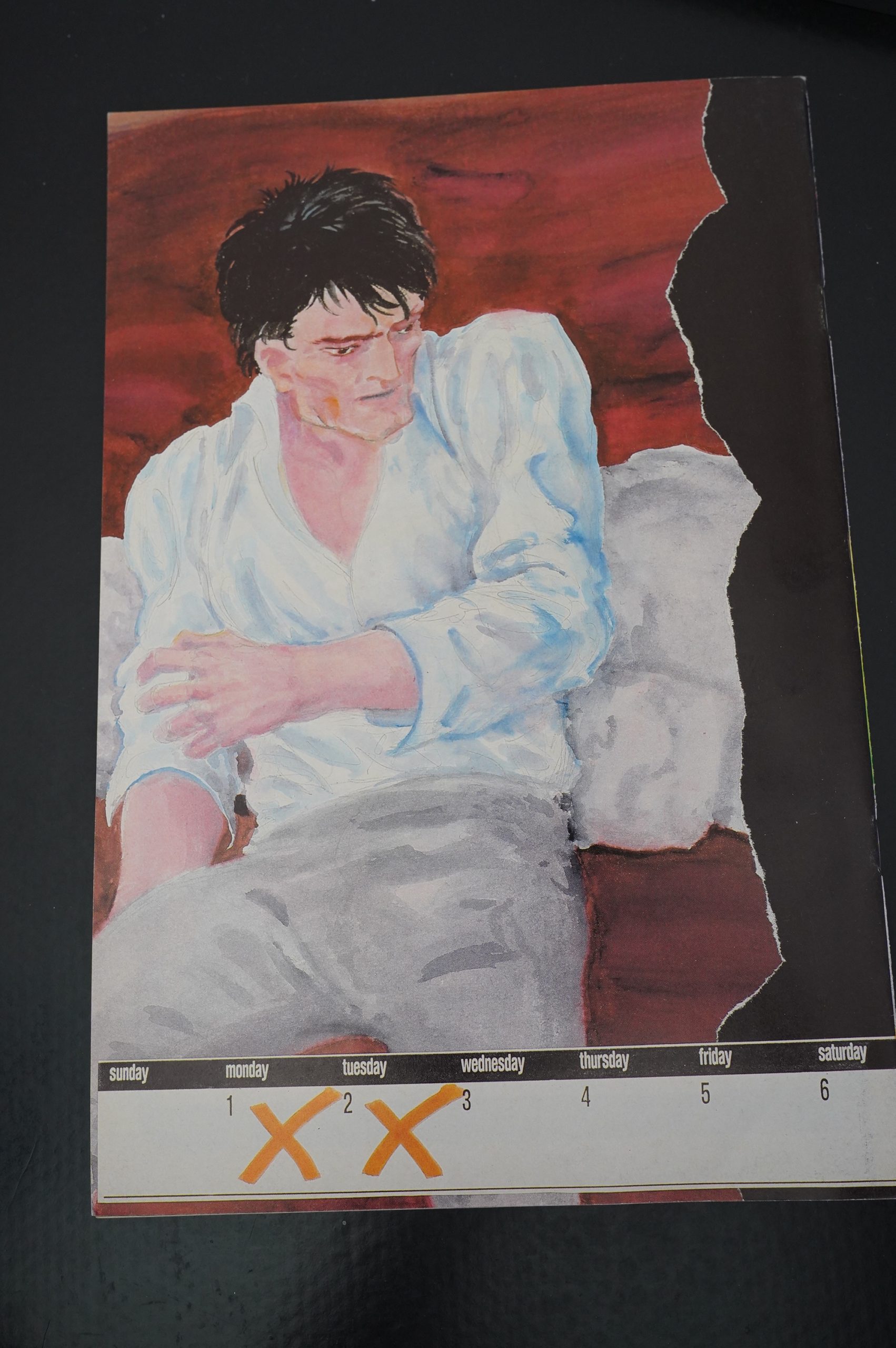 There’s a painted back cover on each issue, and there’s about 28 story pages, so it feels like a pretty generous package.

The paintings look rough in less pleasing ways than the interior artwork, though. 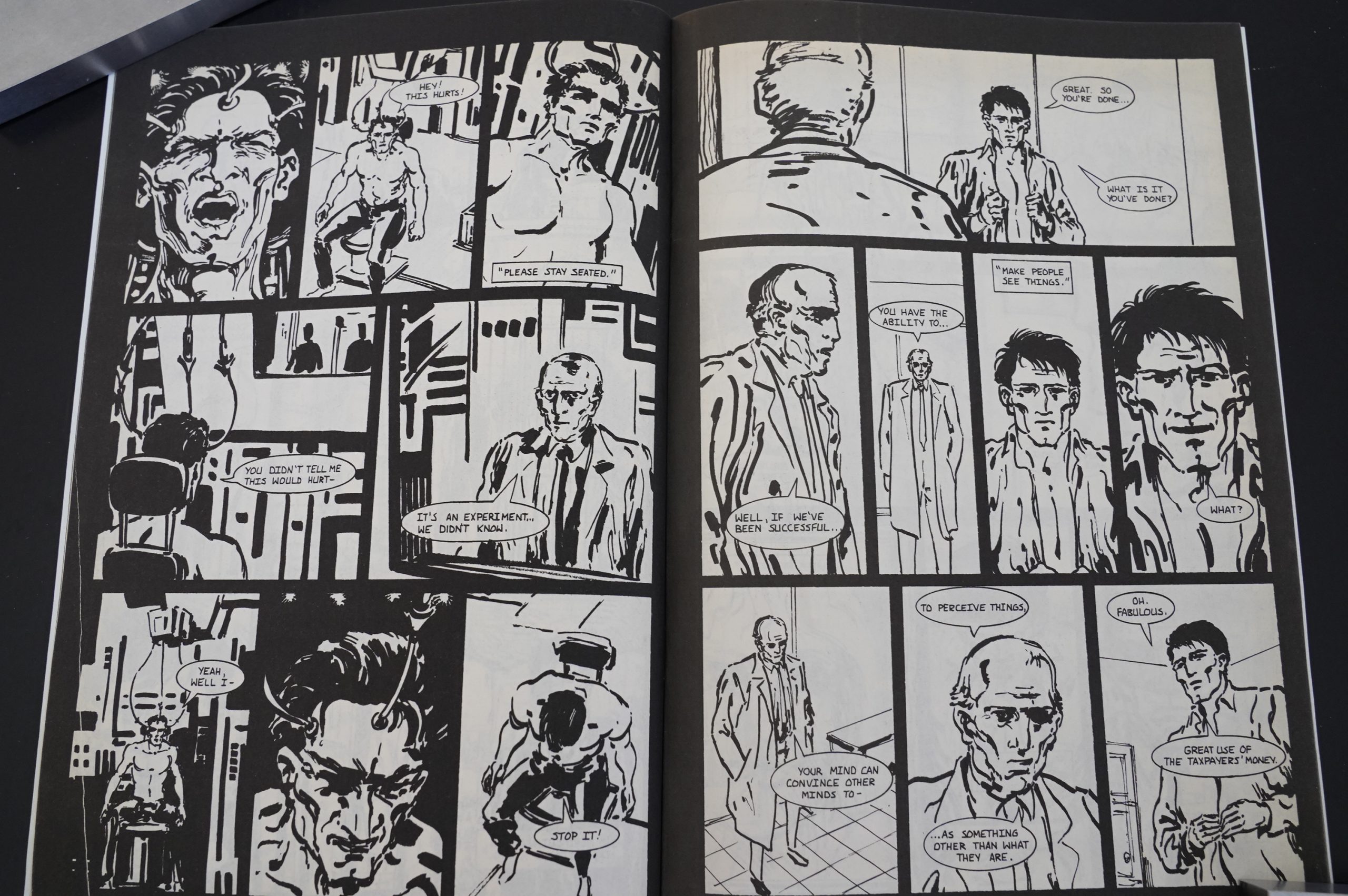 And then… booo! It turns out that the protagonist was a secret gummint experiment, and you’ve got things like the guy not even asking what the experiment was supposed to achieve before participating.

Over a few pages, the creators manage to pretty much disrupt any interest I had in the plot: We’re talking Wolverine here; a super-hero created by a shadowy organisation.

It’s a shame, because everything was going so well. 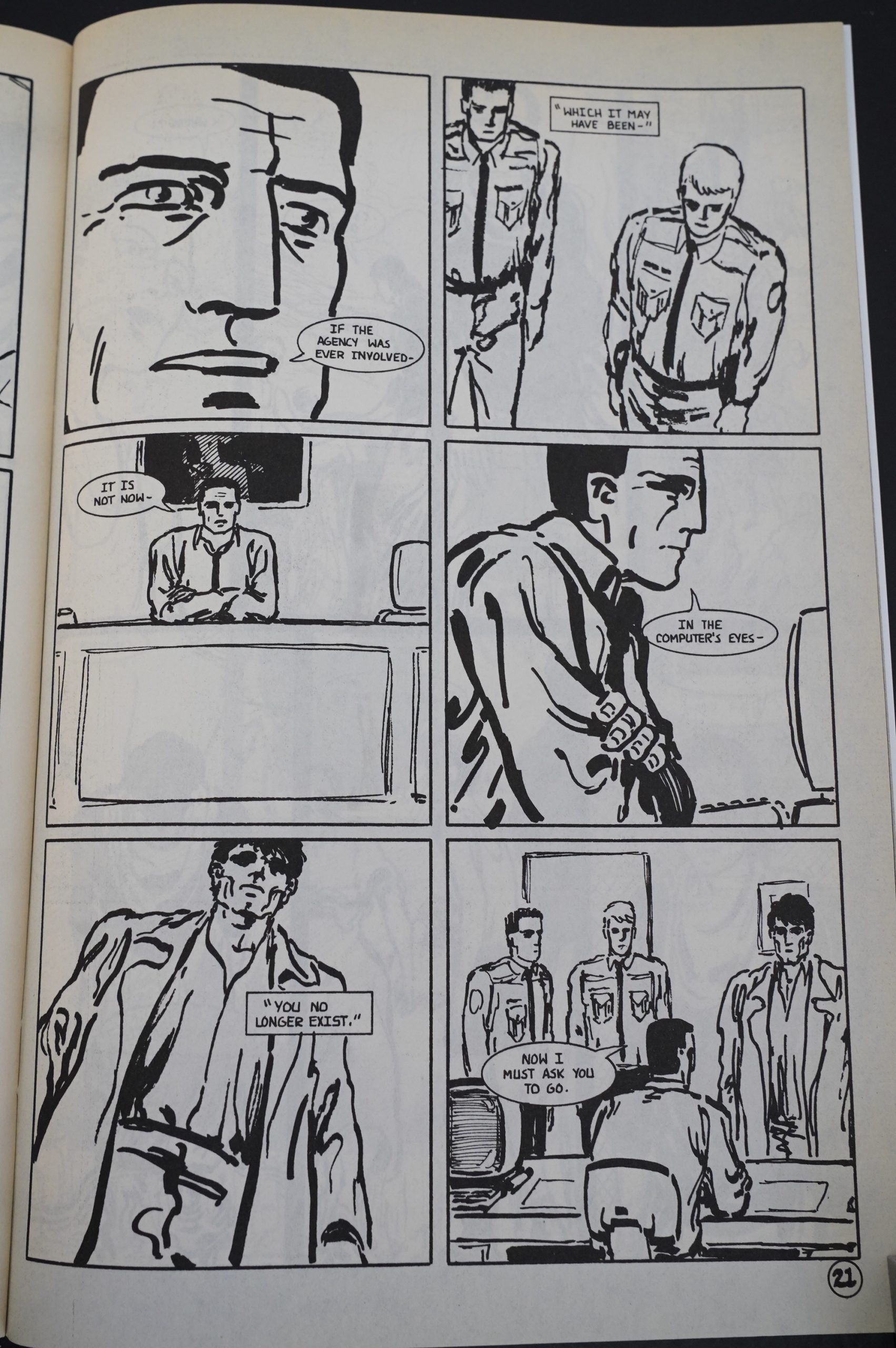 It’s not that the remainder of the series is bad — it’s tense and taut and all those good things, but we’ve seen all this stuff before. 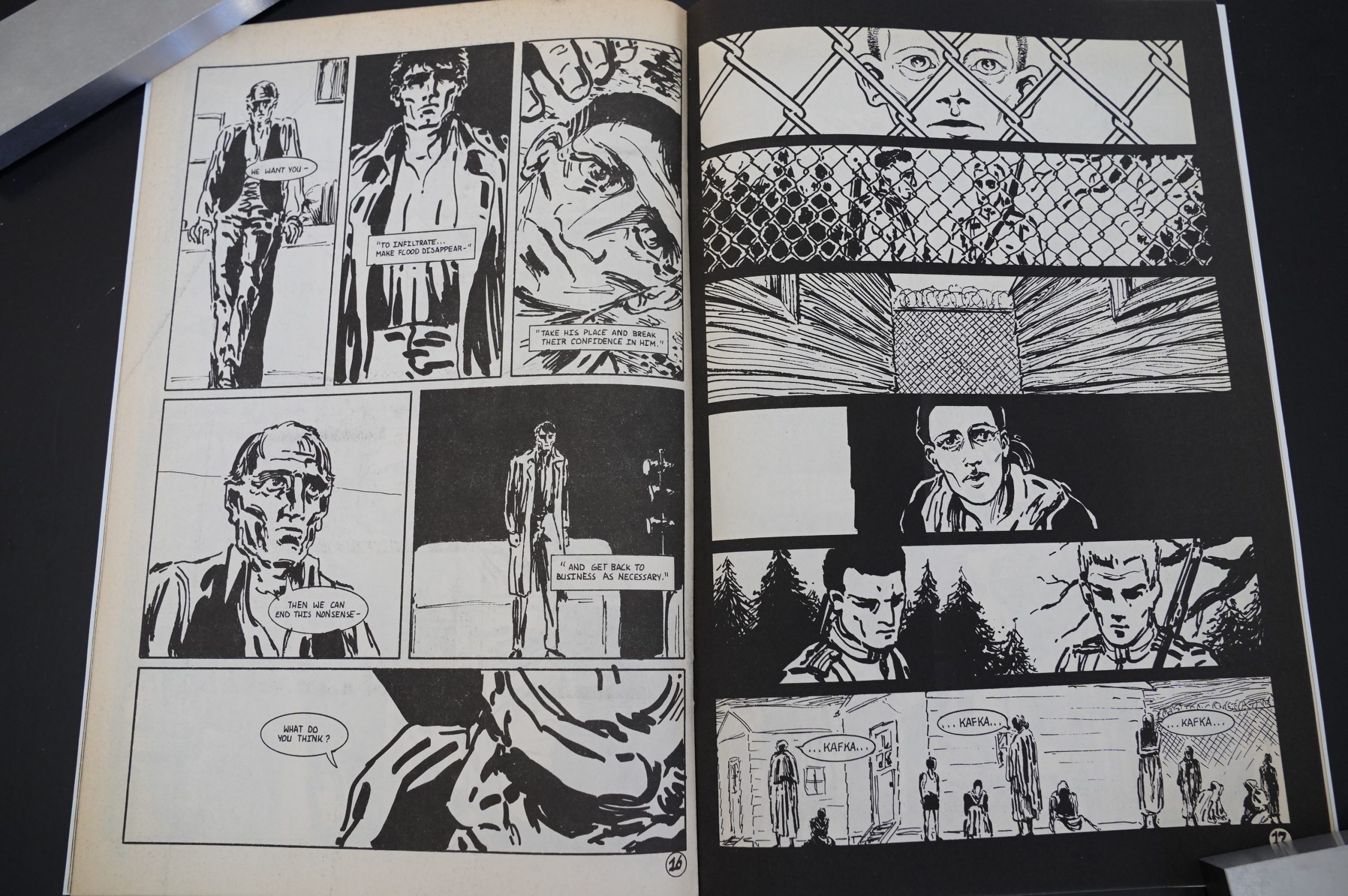 I’m still not sure what the concentration camps with the people saying “Kafka” was supposed to be about. But that’s probably on me!

So there you have it: A really intriguing reading experience… up to a point.

Another way might be simply to
declare “Look at me, I’m dif-
ferent,” to yell “Theater” at a
crowded fire, to yell “Kafka!”
from a jam-packed comic book
rack.
The creators of Kafka eschew
standard artist/writer credits, but
the editorial makes it clear that
Steven T. Seagle did the writing
and Stefano Gaudiano the art. It’s
quite a little editorial. In it Seagle
invites comparison to, of all
people, Samuel Beckett, and sug-
gests that the reader approach this
comic book in the same spirit in
which he would approach one of
the Absurdist master’s texts.
We’re not perhaps smitten with
ourselves just a bit, are we Mr.
Seagle?
For Pete’s sake, this is only a
thriller, folks, although actually a
pretty entertaining one. Don’t be
over-awed. Gaudiano’s artwork is
a little gawky but it gets the job
done. There’s a neat plot twist in
the first issue that lets the story take
off at a nicely urgent pace. I won’t
describe what because you
could read the first issue of Kafta
in the time it would take you to
read my synopsis of it. There’s
about as much text in this whole
issue as there is on a typical page
Of Fantastic Four. You could read
it in a wink, but be warned: in so
doing, you would be flying in the
face of Mr. Seagle’s sincere admo-
nition. “Rather than glancing at a
panel and mcwing on,” he suggests,
“consider the panel. There is a lot
of intentional silence in
Okay. But to this reader, the
aural accompaniment to isn’t
so much an absurd silence, laden
with angst and despair, but that
something more along the lines of
the theme of “Mission: Impos-
sible.•• 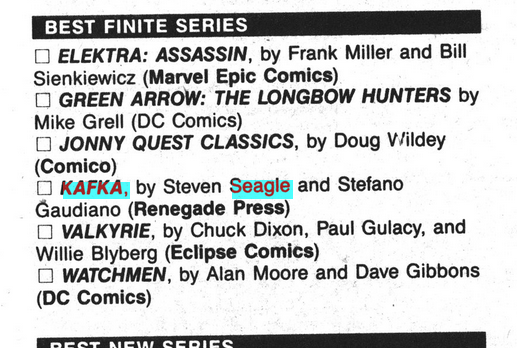 It was nominated for the 1988 Will Eisner Awards, but I’m guessing it didn’t win, since that was the year of Watchmen.

Huh. Valkyrie, the Airboy spinoff, was one of the other nominees. Didn’t expect that.

The reviews are mixed:

The arrival of two sets of pickup team at the beginning really captured my attention.
After that, I lost all interest.

I am not much of a reader I don’t like reading at all and this book that I read was interesting and it was called Kafka and it was very suspenseful and you really wanted to know what was gonna happen next.

Although I do enjoy noir thrillers, I hardly find myself enjoying the novel as I should. The comic-style art is raw and darkly uninviting like the noir environment it thrive and it have its cheesy predictable moments associated with man-on-the-run trope to keep up the pace while sacrificing on plot and character substance.

Seagle supposedly came across the word as Polish slang spoken in concentration camps that was used to describe someone taken in the night. His hero, Daniel Hutton, has repeated flashbacks to his own time in such a camp, though the timeline doesn’t quite seem to work. 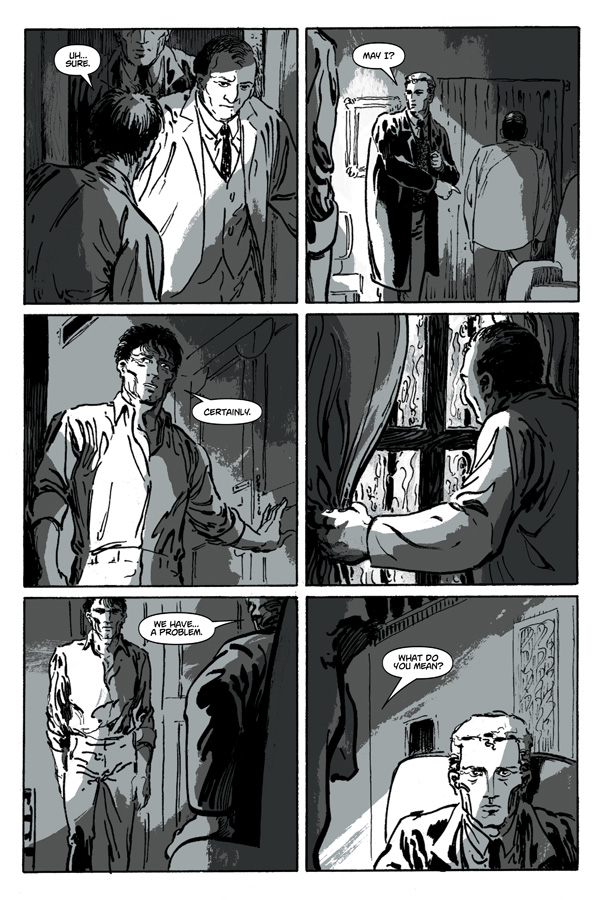 Looks like everybody agrees with me, so I’m starting to wonder whether I was wrong:

Despite Seagle’s reworking of Kafka, the ending still feels rushed and difficult to believe. Hutton’s final escape is so obvious, I almost shouted at the page.

Both Seagle and Gaudiano have had long, successful careers in comics after Kafka, which I think perhaps explains that it’s been reprinted so many times.