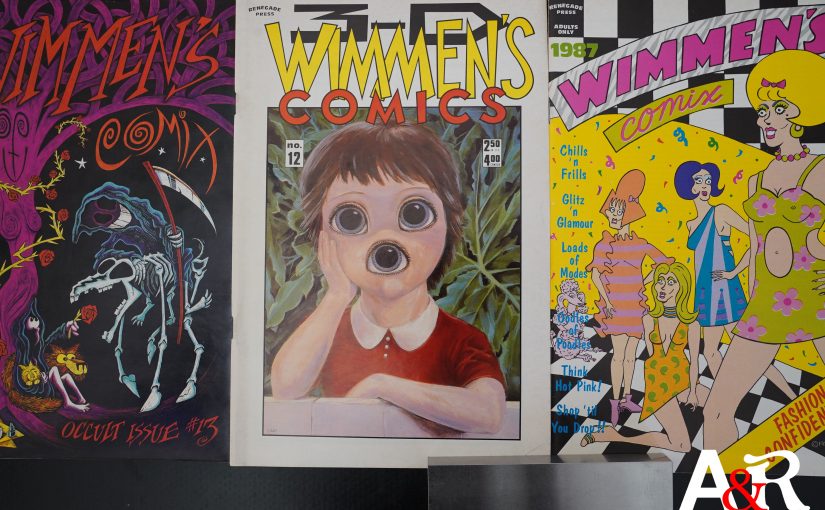 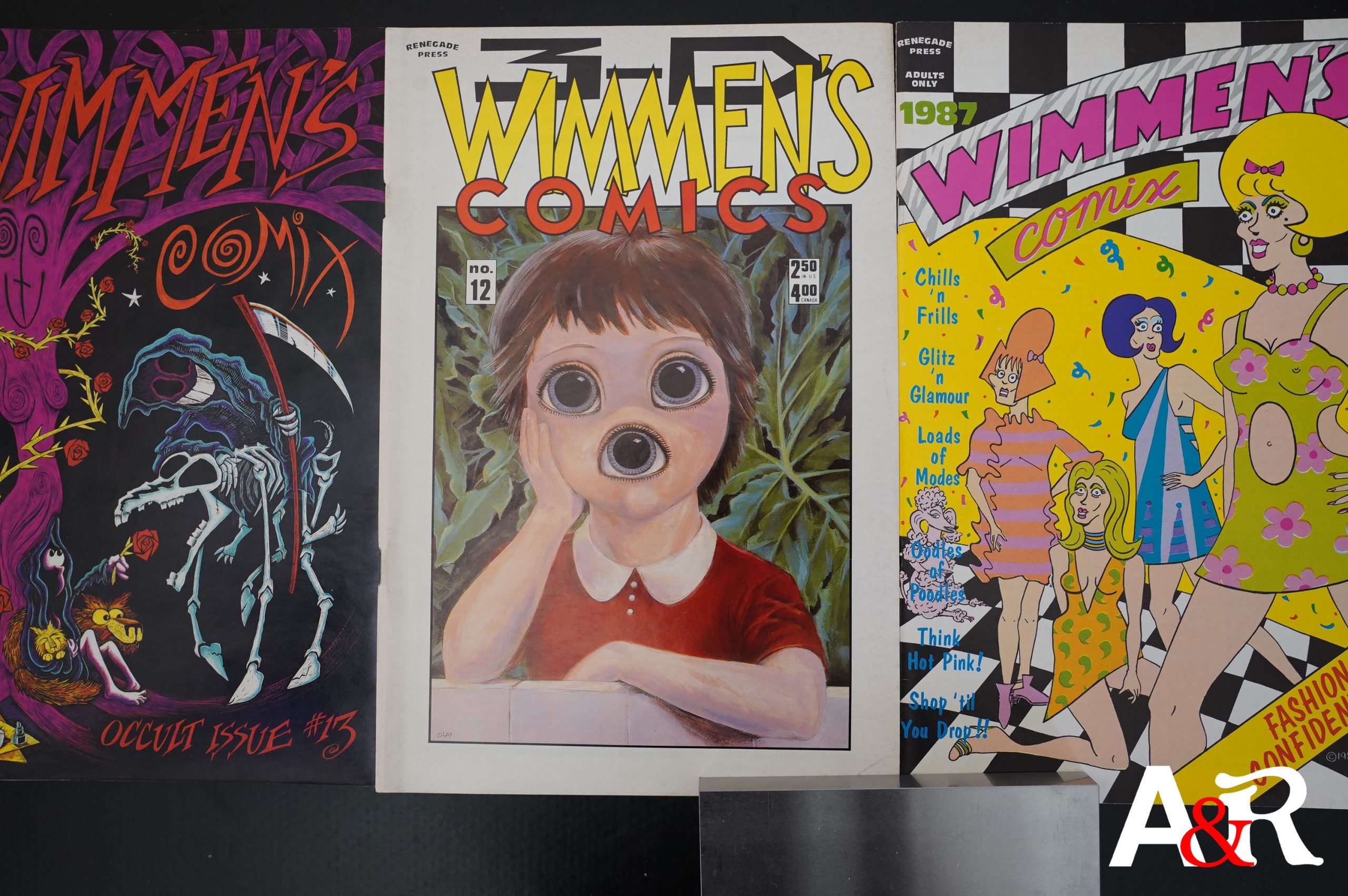 The first ten issues of Wimmen’s Comix were published by Last Gasp. I’ve got them here in some shortbox somewhere, but since this is a blog series about Renegade, I’m gonna skip re-reading them now. 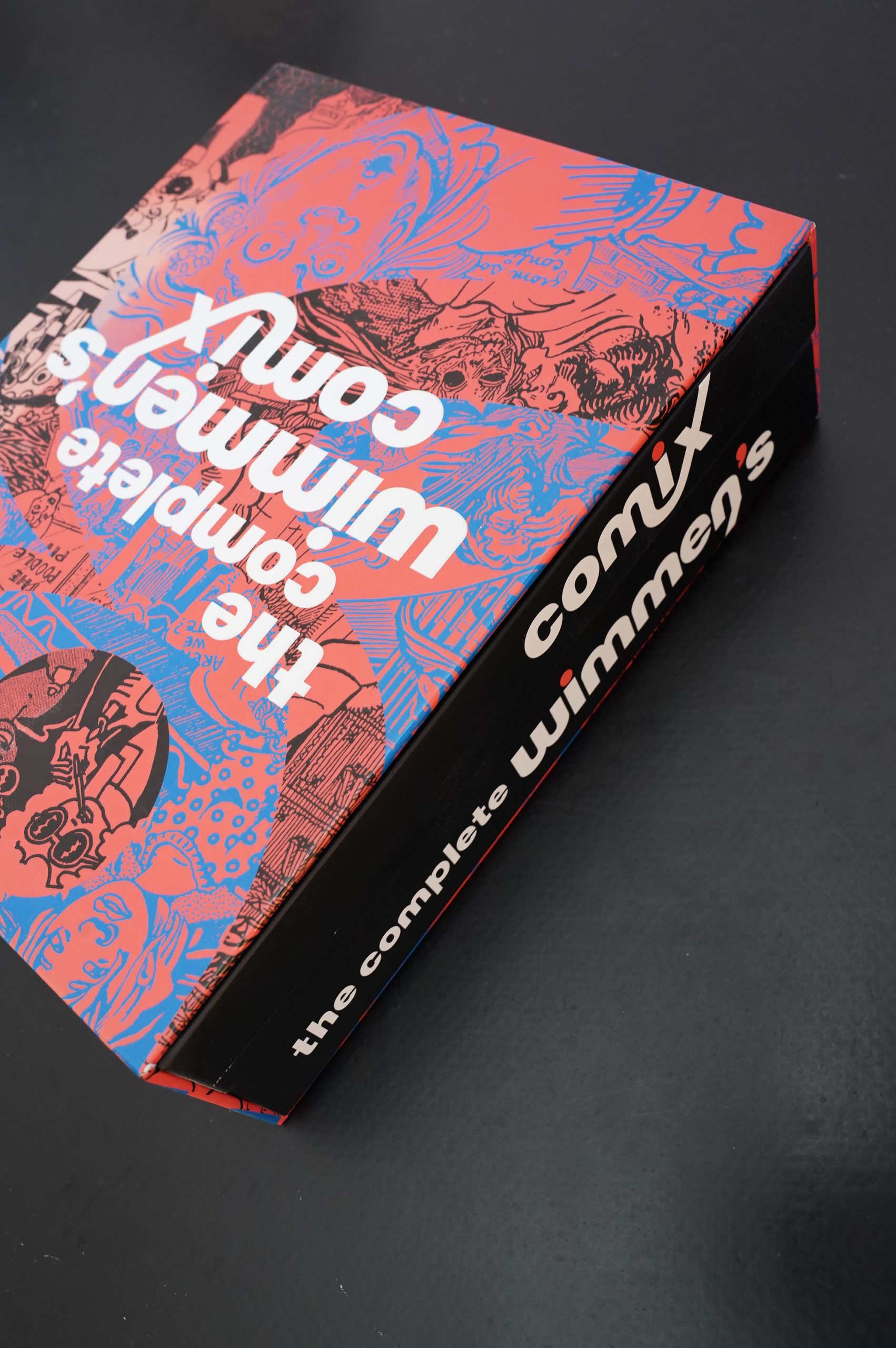 Besides, I re-read it all somewhat recently when I got the box set collecting the entire series (and more). (By the way, I wish there were more reprint projects like this — I love reading anthologies: There’s a bunch out there that are really solid and have exciting work that’s never been reprinted. But I know I’m in a minority here…) 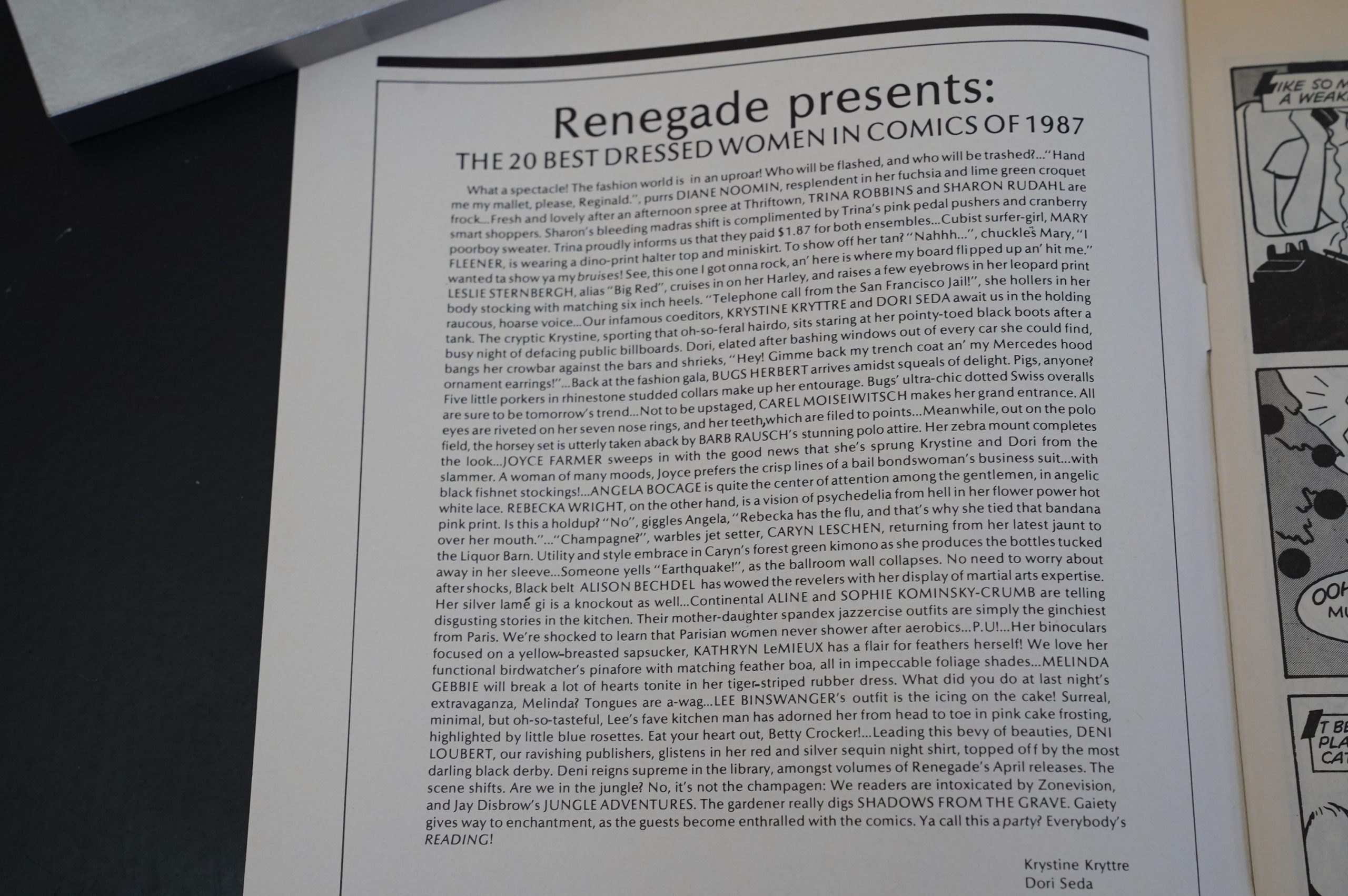 Anyway, after a decade and a half with the decidedly underground Last Gasp, Wimmen’s Comix is now with the decidedly direct market Renegade Press. So I wondered whether this would affect the talent pool. Issue eleven is edited by Dori Seda and Krystine Kryttre, both of whom a underground-affiliated artists… 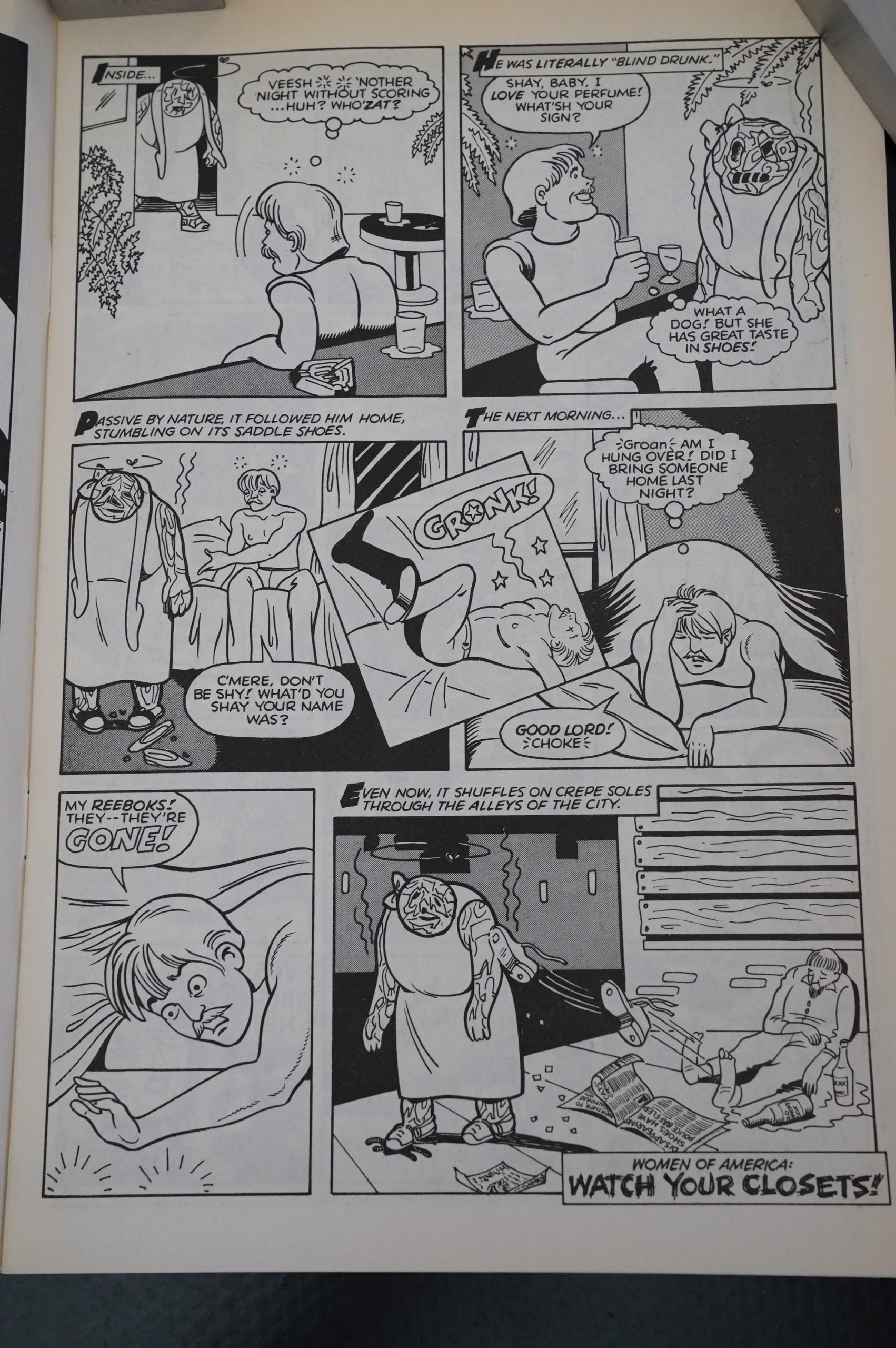 As usual, there’s a theme to the issues, and this one is about fashion. So here we have Trina Robbins does a fun horror/shoe story. 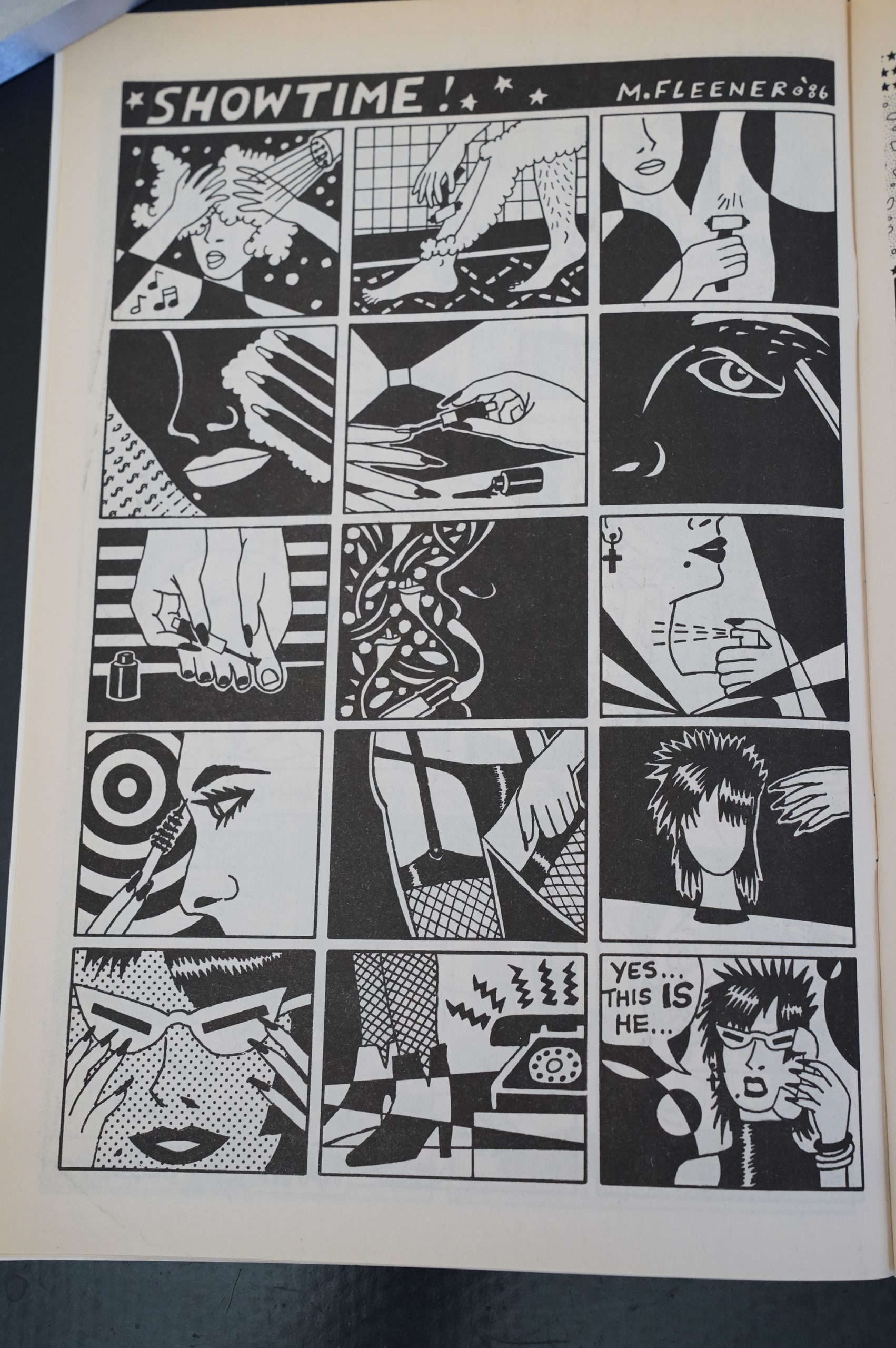 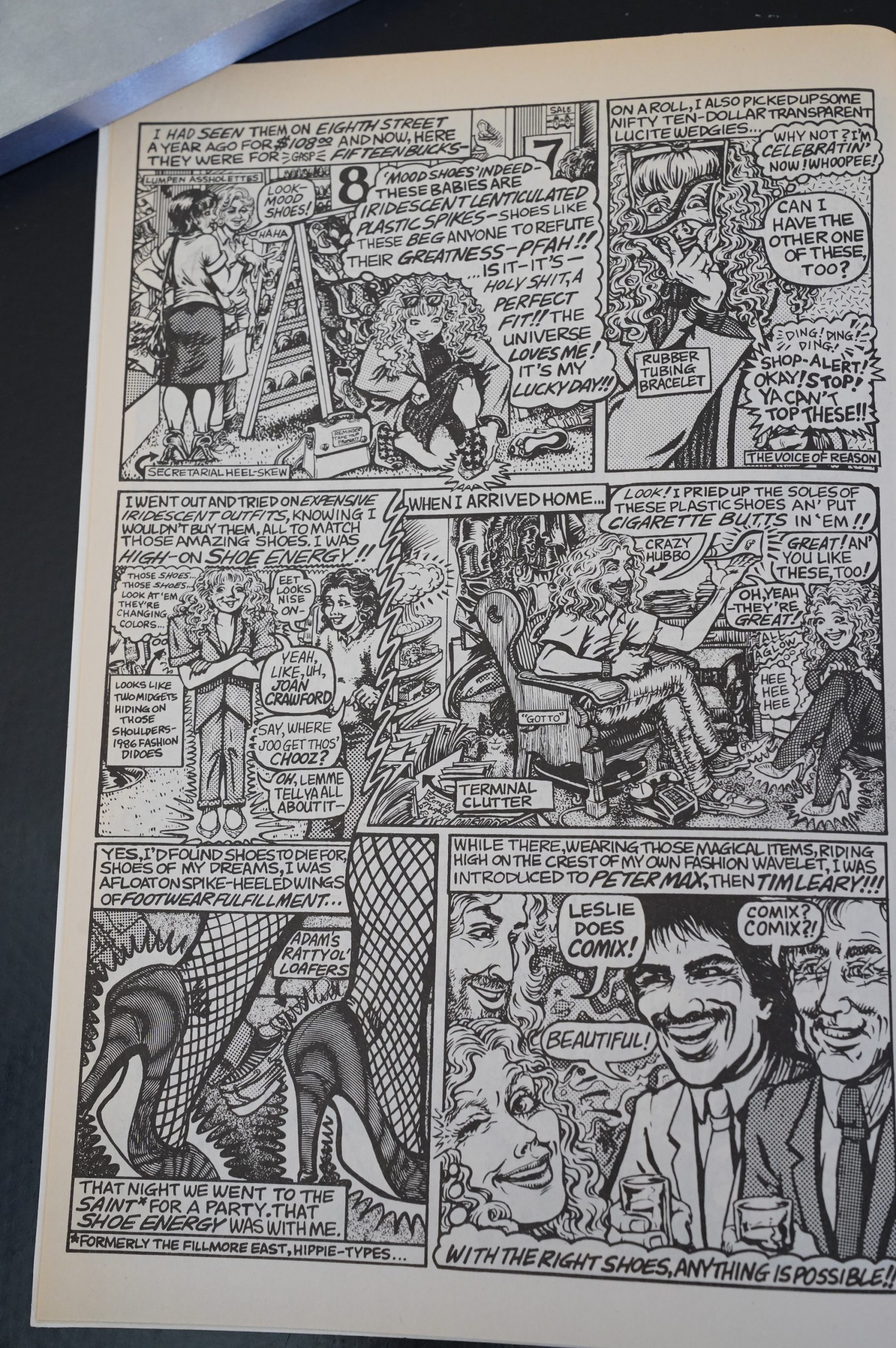 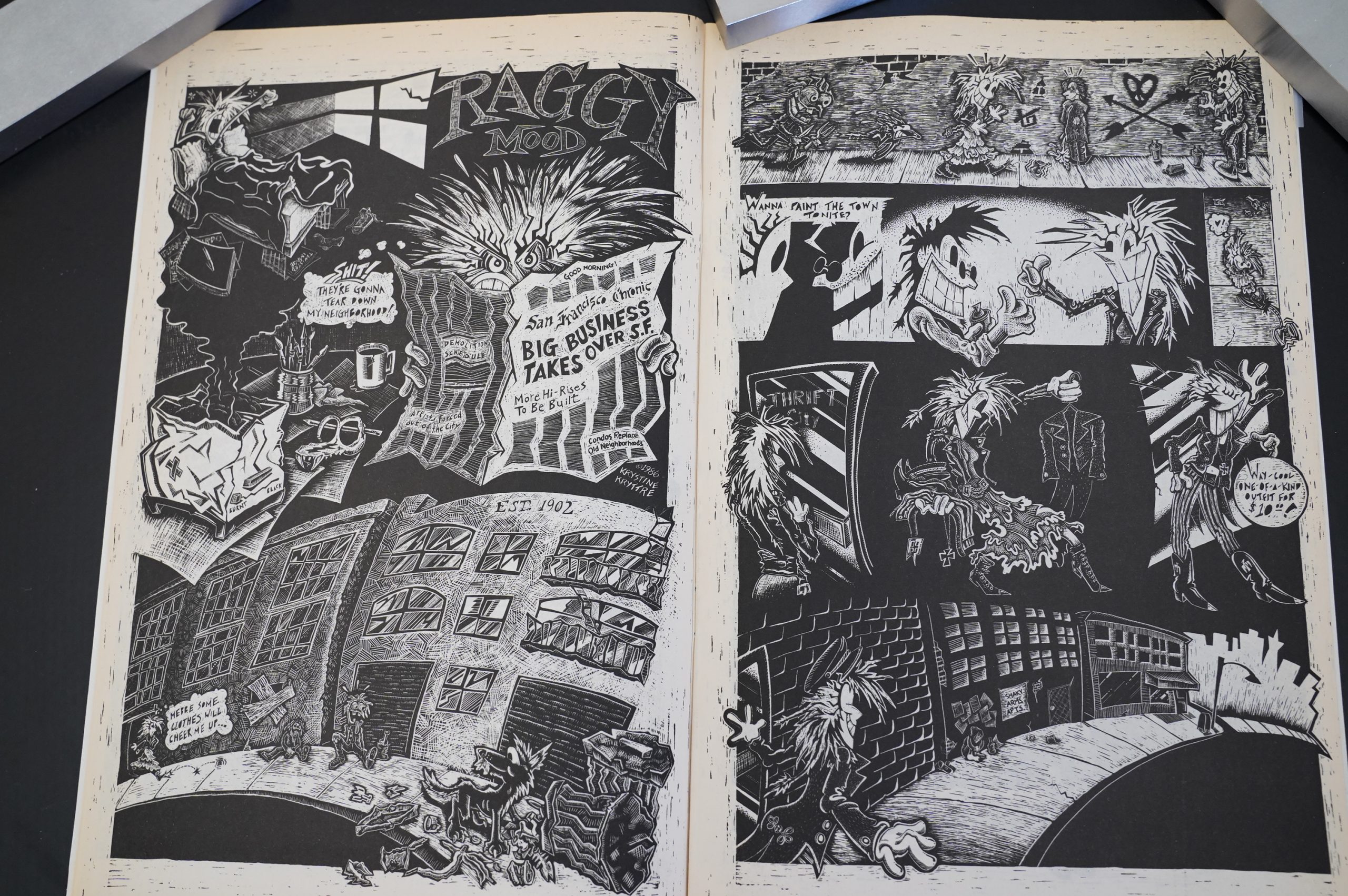 Krystine Kryttre’s artwork is stunning as usual. I love how the scratchy lines continue all the way to the edges of the page. 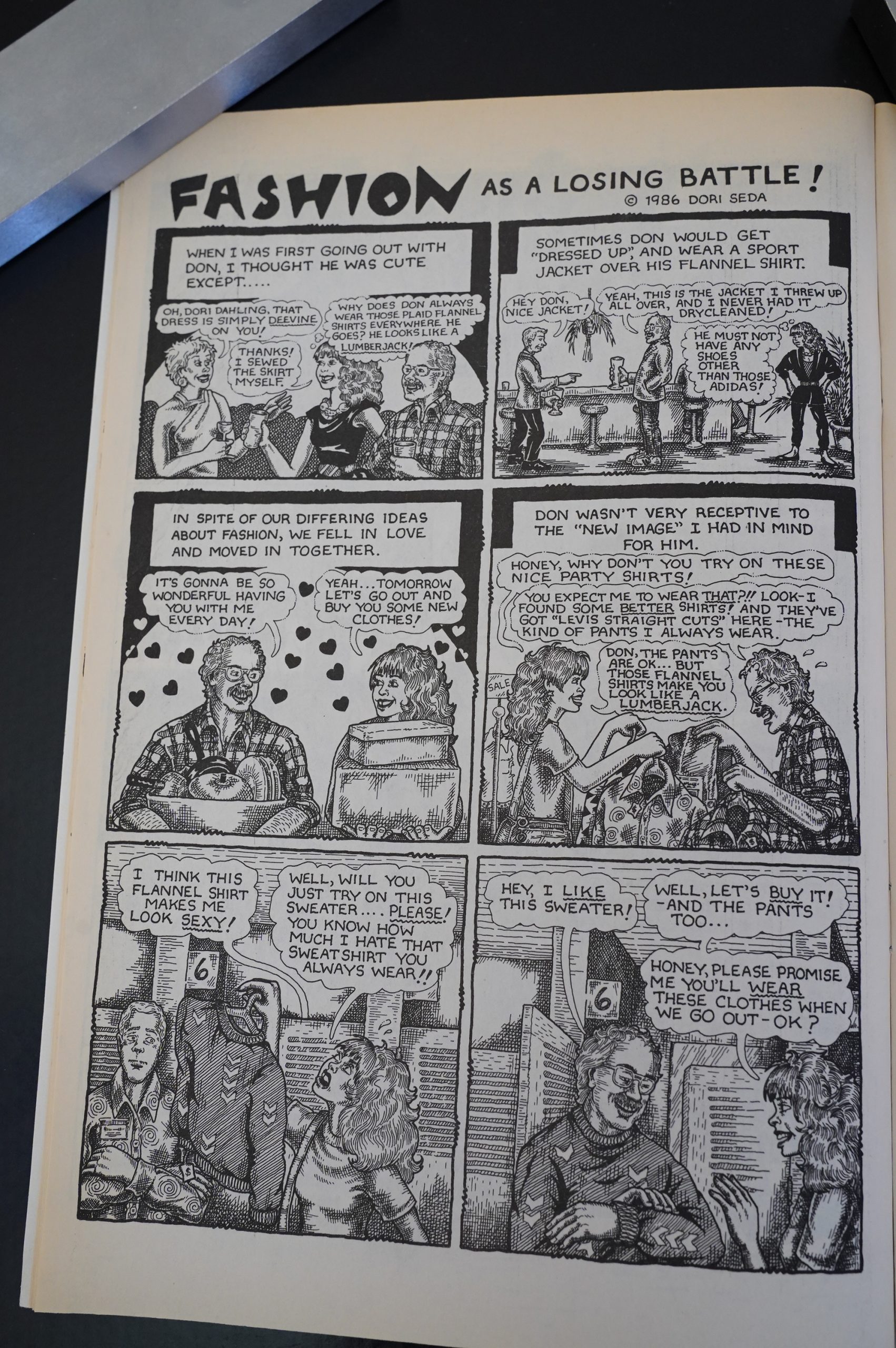 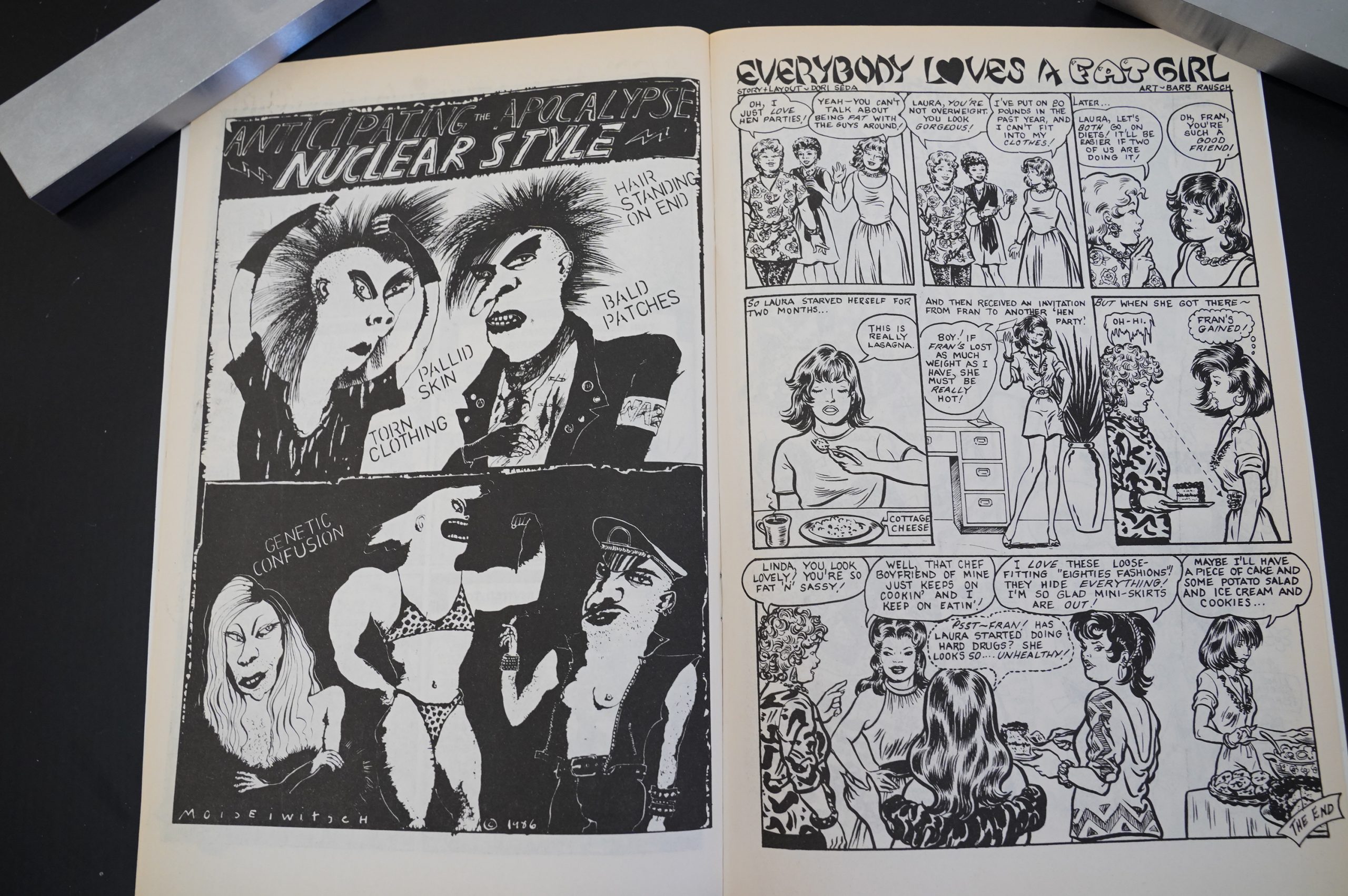 Barb Rausch and… Carel Moiseiwitch! She’s flabbergastingly awesome. Which reminds me — I wanted to check whether the box set was reproduced from originals or just shot from the printed comics. 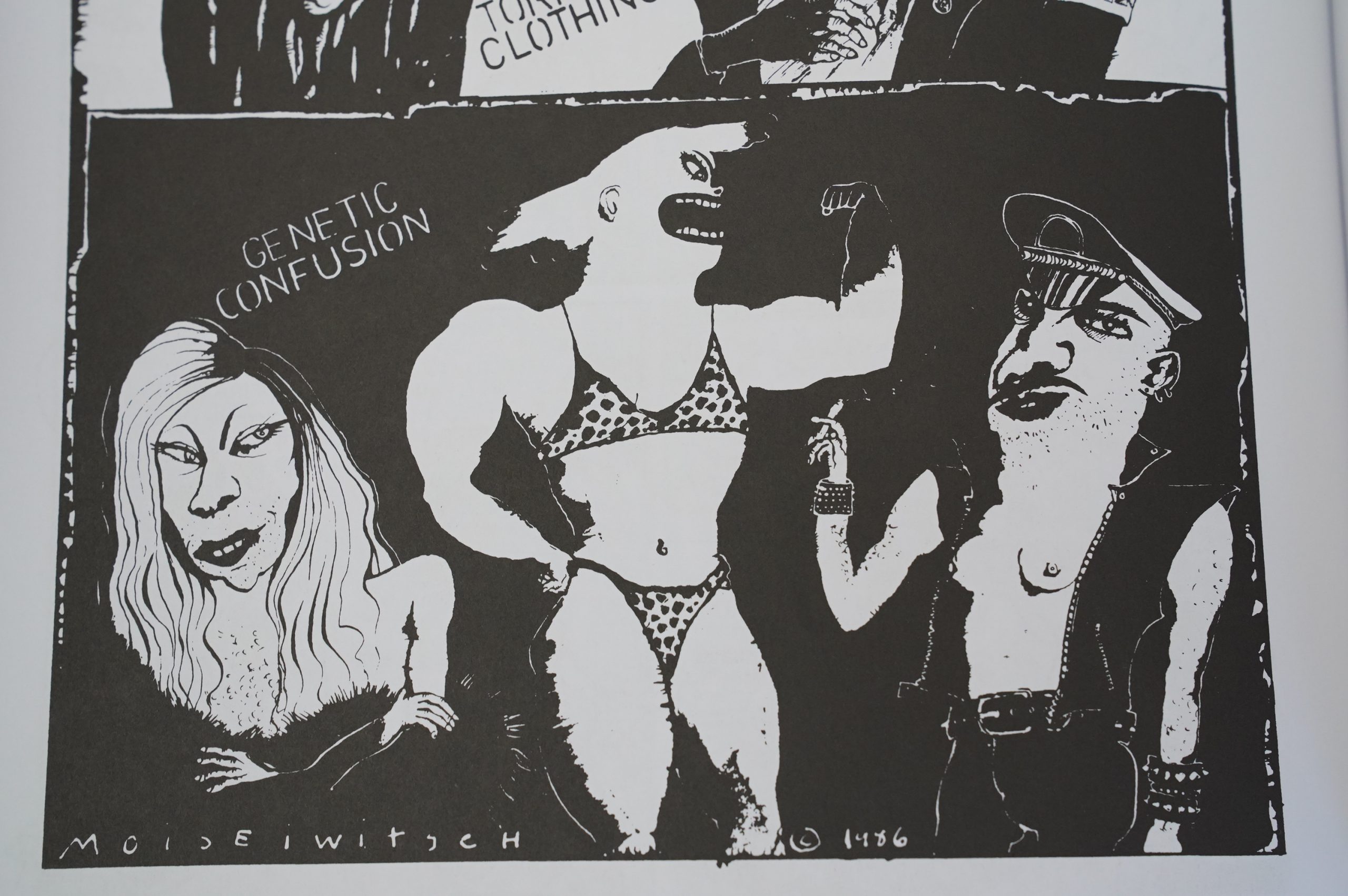 Here’s the same panel from the box set, and it… looks pretty much identical? All the same printing defects? So I think the box set was shot from the printed comics. 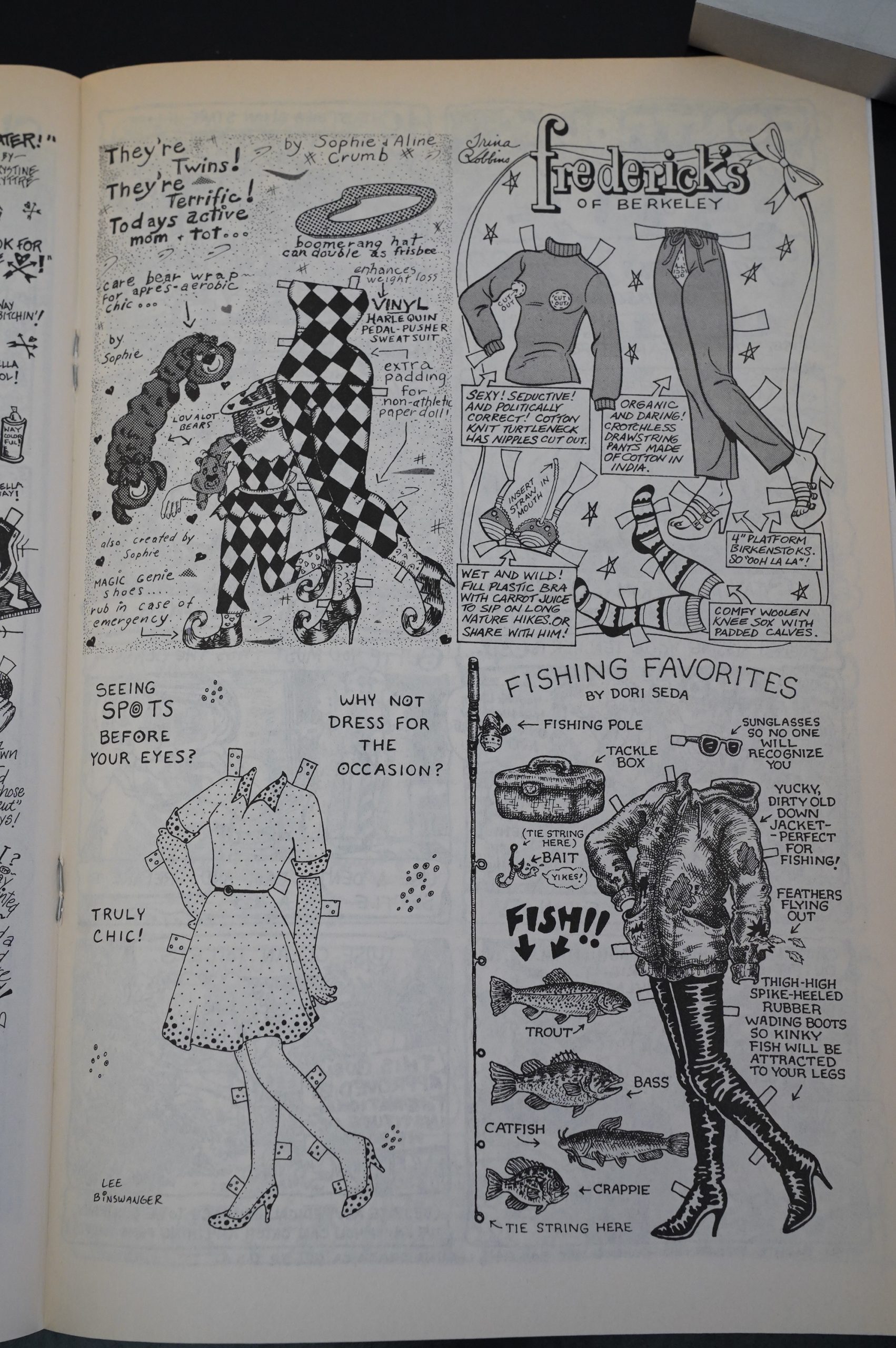 A whole bunch of paper dolls, as is appropriate. 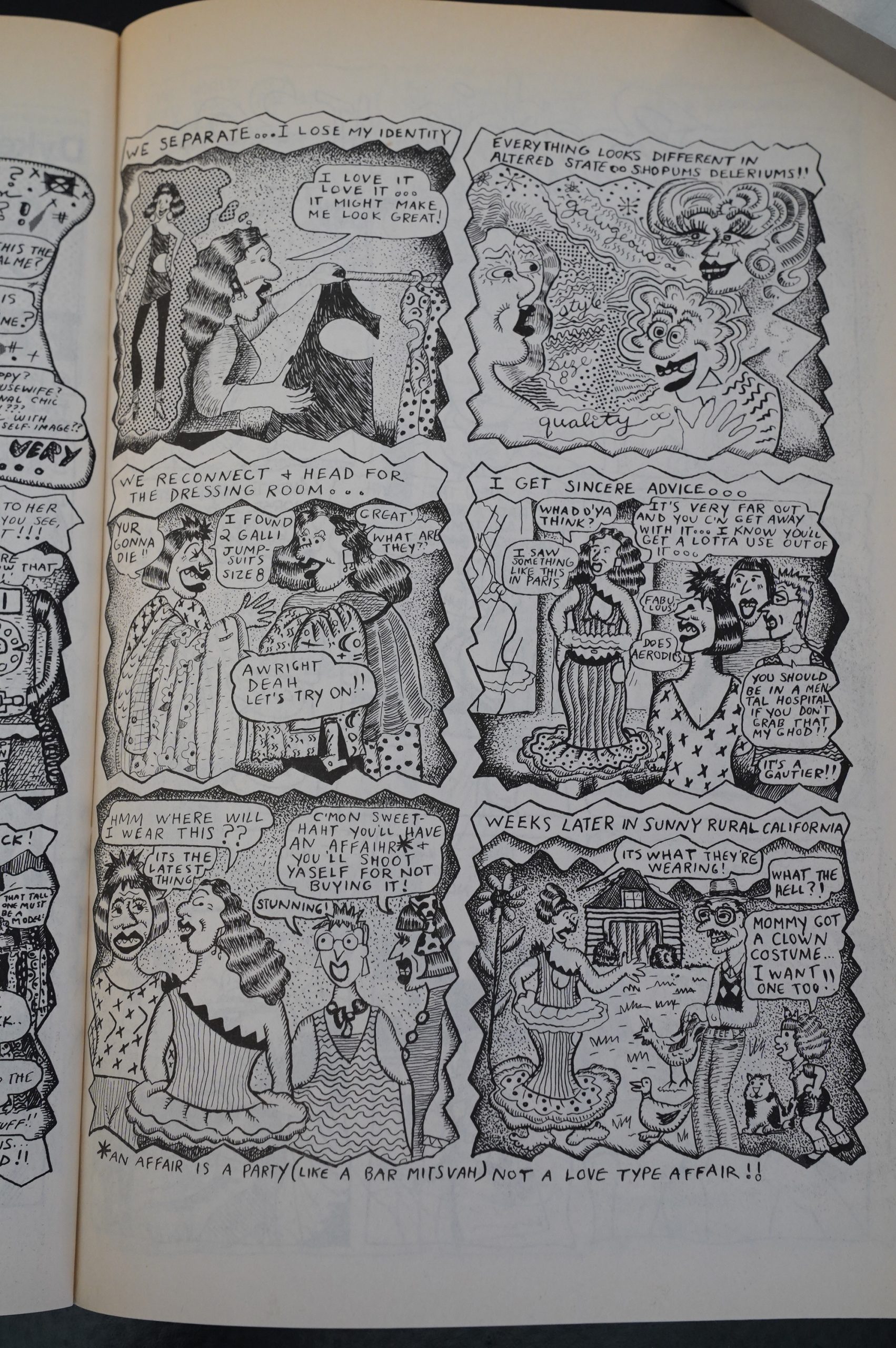 So — this issue is jam packed (few stories are longer than two pages), and it almost all underground artists. So I guess the reason for moving to Renegade wasn’t necessarily to go more “mainstream”? Although the stories here are pretty slight… but funny. The only story that’s in any way “edgy” is this one by Melinda Gebbie. I love her oddball storytelling rhythms — the story flows in a kinda magical way, and then ends with a great gag.

Happening upon a Gebbie story in an old anthology is always a delight. Somebody should publish a Gebbie career retrospective already. 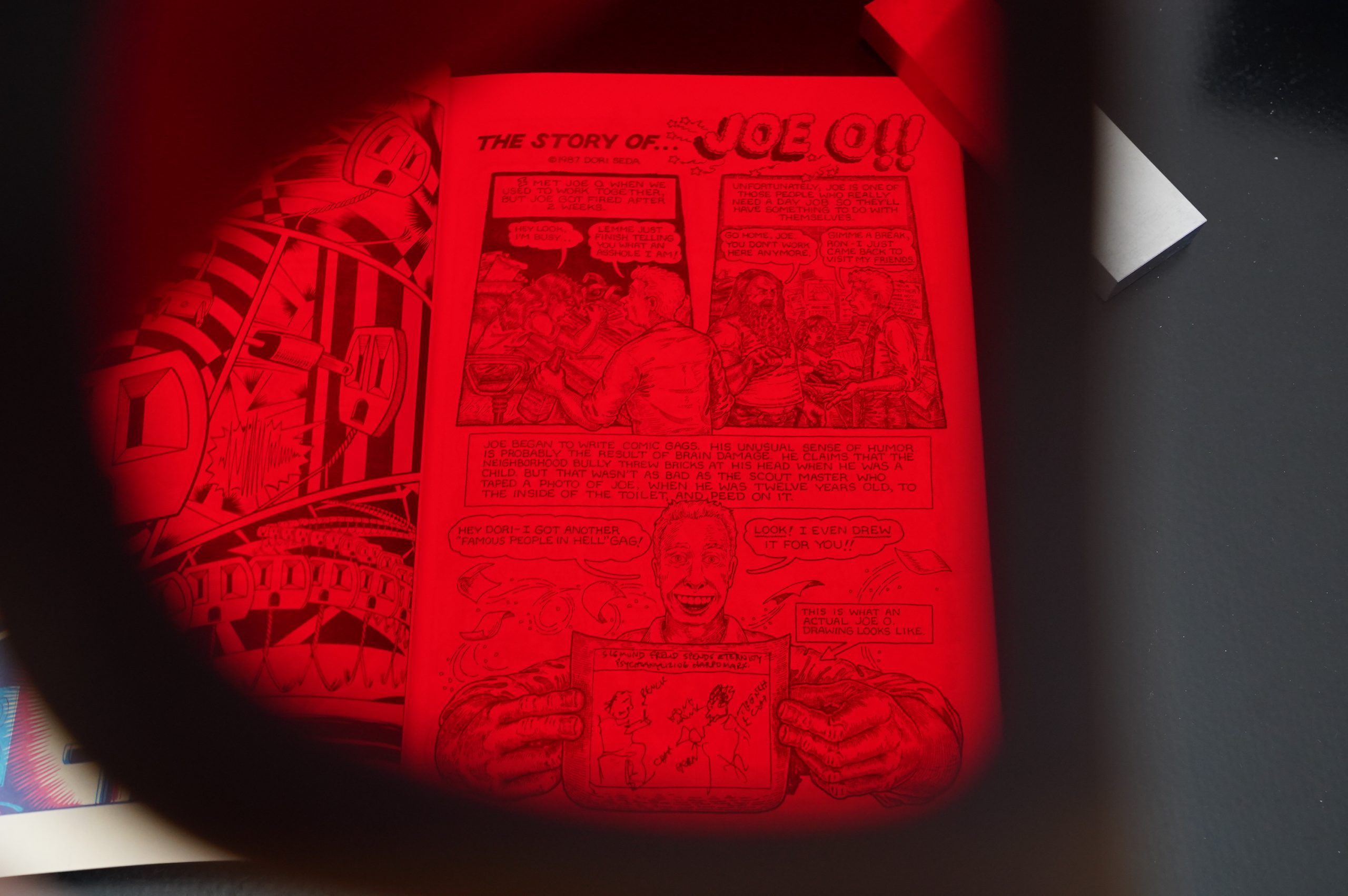 The twelfth issue (edited by Angela Bocage and Rebecka Wright) is a 3D issue — and this is more of a direct market thing (Renegade had done several 3D publications by this time). The 3D is by Ray Zone, as usual, but… I don’t think it quite pops the way it should? I may have slightly off 3D glasses… the blue doesn’t quite nix out the red.

But this Dori Seda Page did really pop. 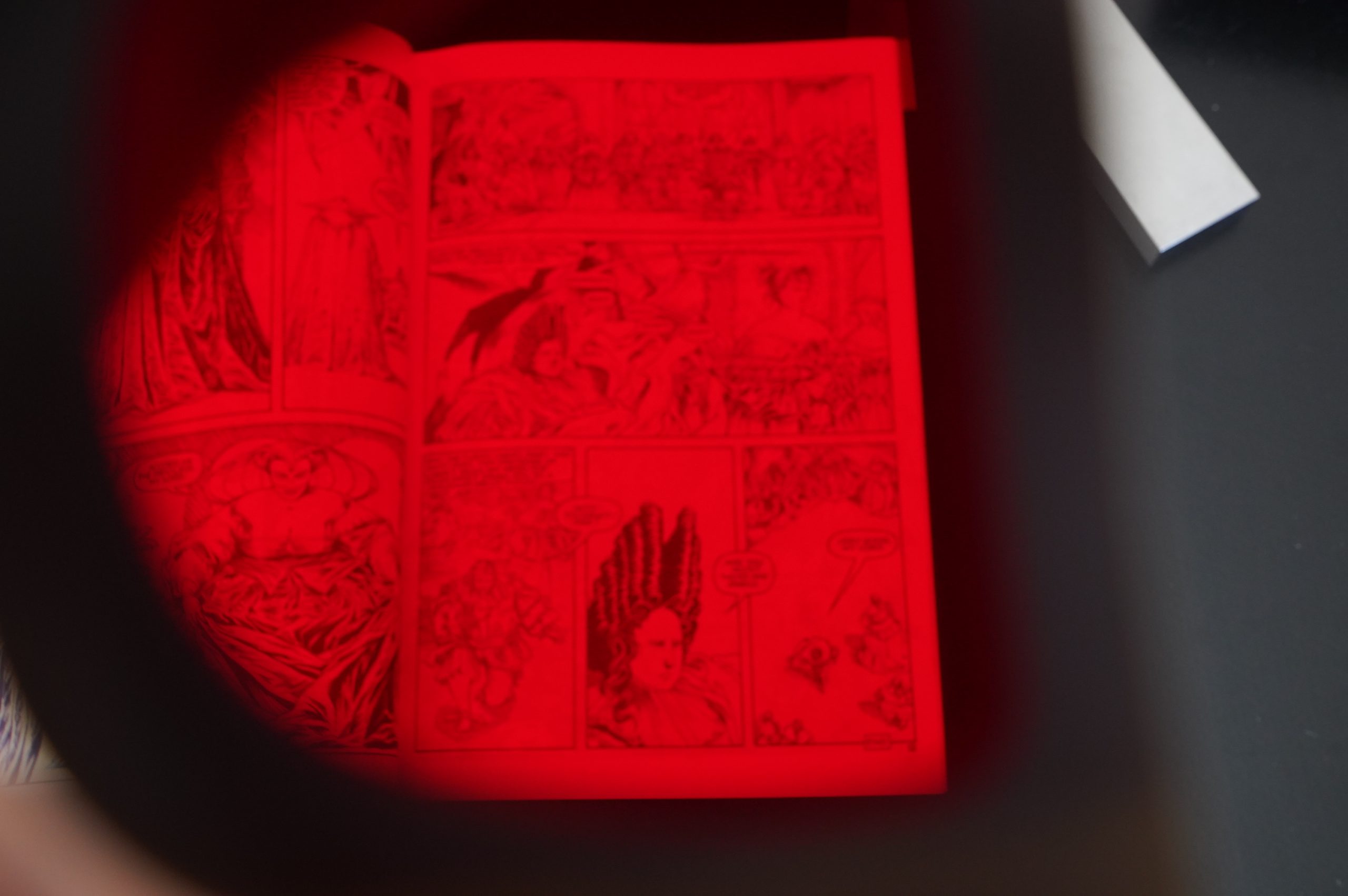 And we do get a whole lot more artists that aren’t totally underground affiliated, like Cynthia Martin above. The best page here is this one by Krystine Kryttre, and I can’t recall anybody else doing a 3D page like this, where the figures are sort of hovering into the void. It’s a great idea. As you’d expect with a 3D issue, it’s pretty light in content. Angela Bocage does the most memorable piece — “Why We Do It” — which is about cutting.

And this sort of effect, where you only see things through one eye, is pretty painful to read, which is on purpose, I guess. The final Renegade issue doesn’t actually mention “Renegade” anywhere — Renegade was shutting down around this time, so I guess it might make sense to go “stealth”.

Lee Binswanger and Caryn Leschen are the editors. The longest thing here is this one by some Italian creators (credits above). It doesn’t really fit well with the rest of the pieces… The funniest bit here is this one by Judy Becker… which is also the least occult piece, probably. (Oh, yeah, that’s the theme for the issue.) Anyway, those were the three issues… and you can perhaps see a shift from less harsh subject matters in the previous issues? But it’s not a radical shift, I think.

After Renegade’s collapse, Wimmen’s Comix moved over to Rip Off Press for the final few issues.

On a much more positive note Wimmen’s Comix should take its share of the credit for nurturing so many now-celebrated women comix artists who have eased the genre out of the underground and into the mainstream of comics and graphic novels—and for providing a lot of raucous laughs to themselves and their readers on the way.