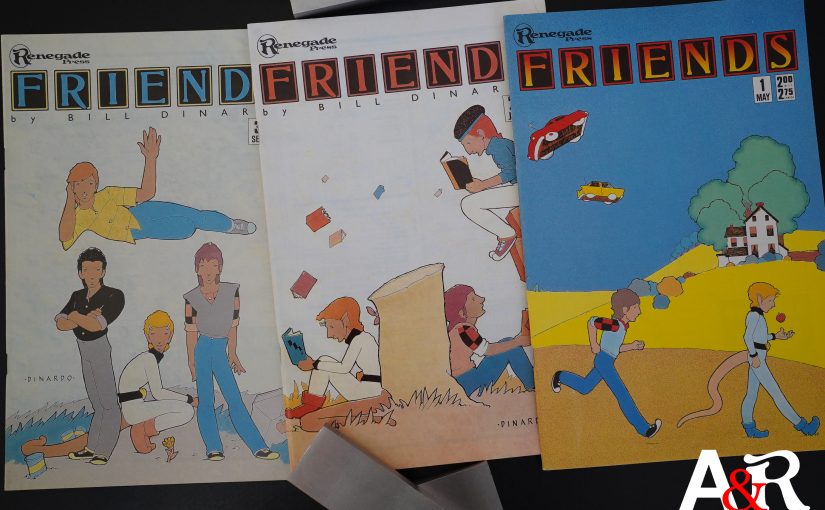 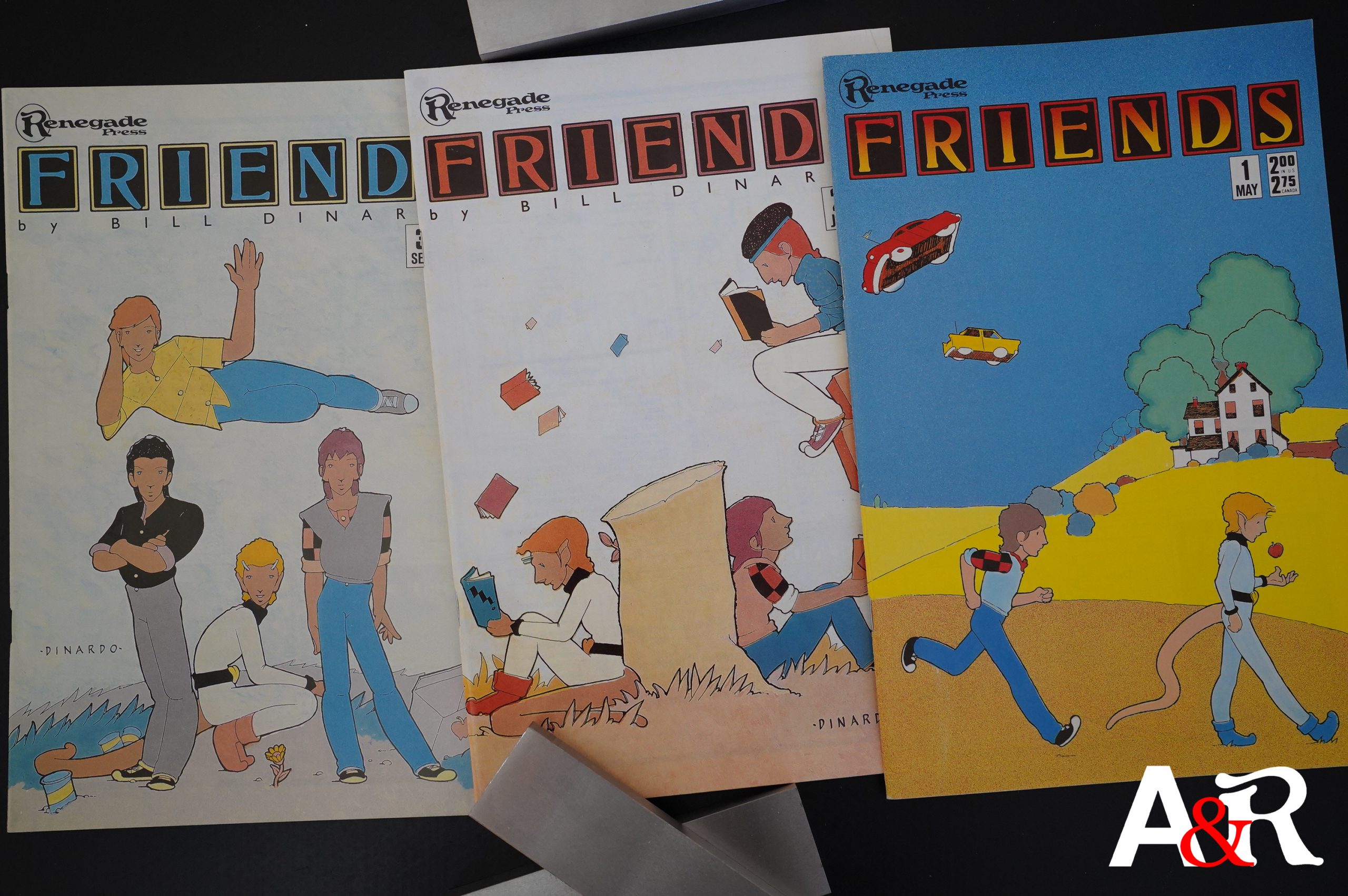 When I was considering doing a blog series about Renegade, the first thing that popped into my mind was “Yeah! Friends! I get to read Friends again!” Which is pretty odd, since I could just re-read it anyway, but…

I remember Friends well from when I was a teenager. That is, I remember reading it, and going totally “this is the weirdest thing I’ve ever read”. I remember showing it to a friend saying “look! how weird this is!” I don’t quite remember if he then backed away while nodding slowly…

But I don’t actually remember anything much about the contents, other than it all being like… tableauxes… (That’s a word.)

I may be misremembering — it’s been a while. Let’s read the first three pages together: 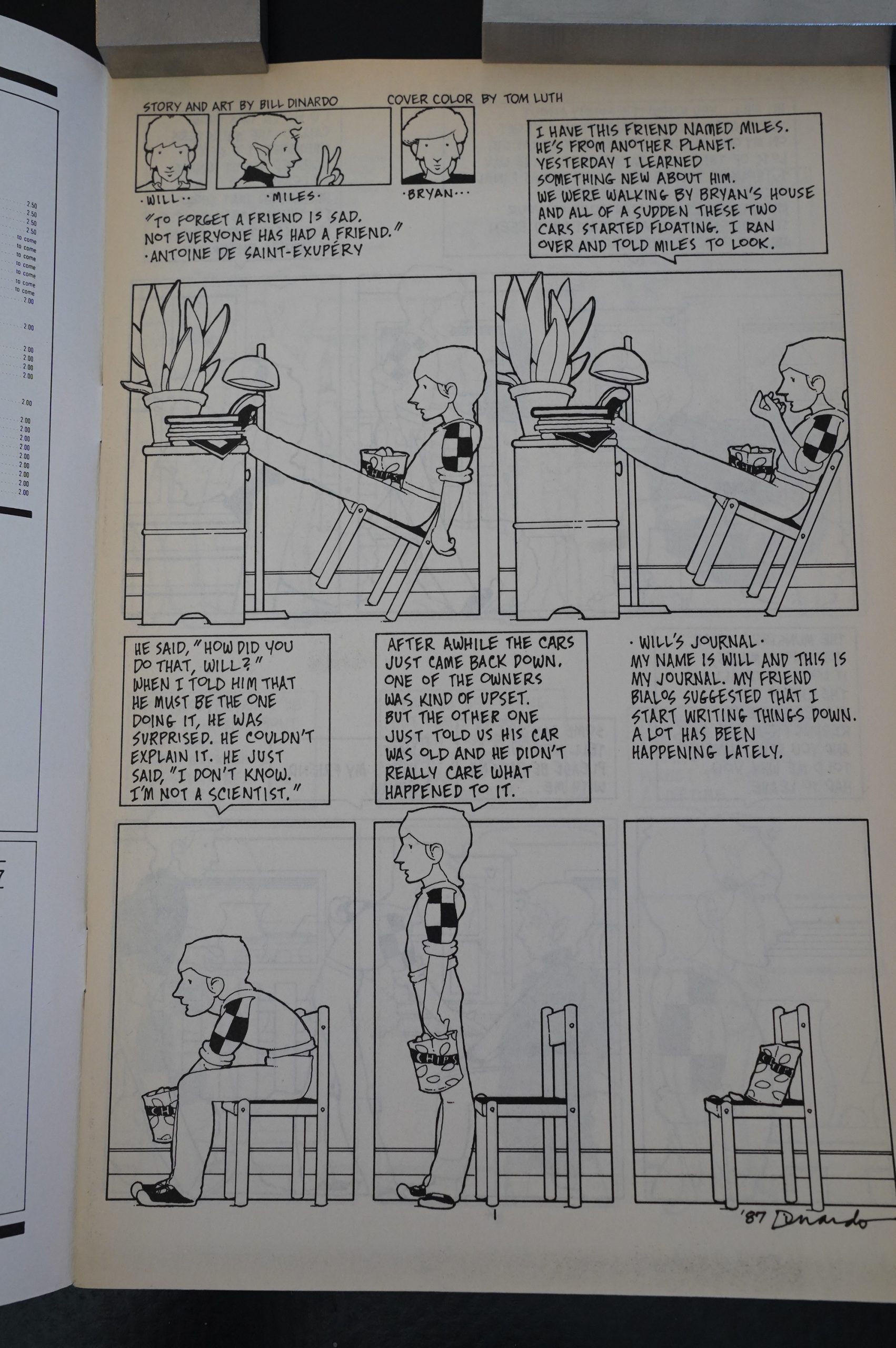 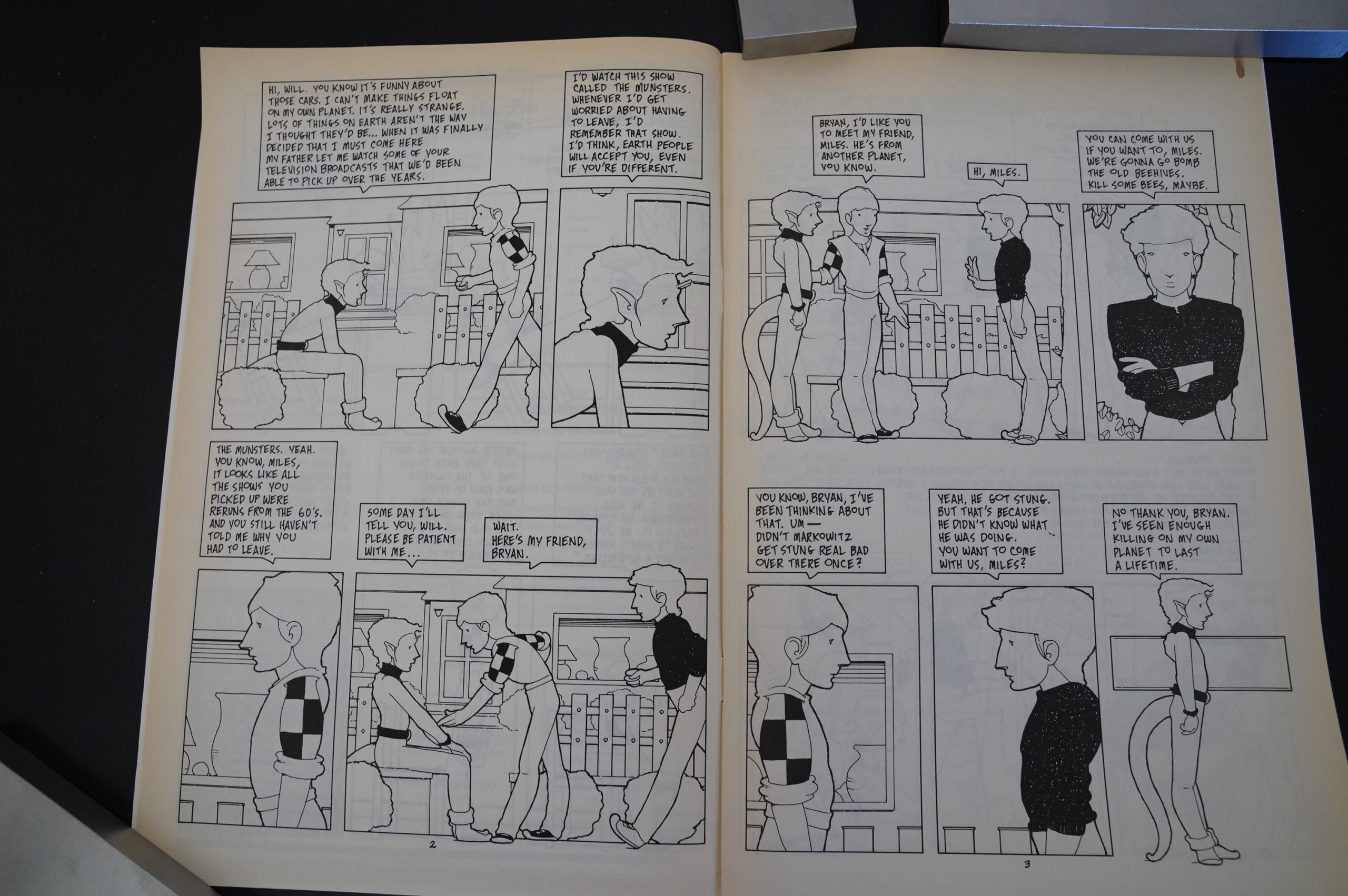 See? I told you so! It’s so weird! It’s like from an alternate dimension where Windsor McCay was the dominant comics paradigm, but it’s more than that: Everything is laid out as if a stage play, with full figure panels most of the time, but zooming in to half figure characters sometimes.

The balloon placement makes everything very horizontal, very left to right… and everybody is of identical height and body build, with essentially the same faces and hairdos. And their heads mostly poke out of the top of the panels. 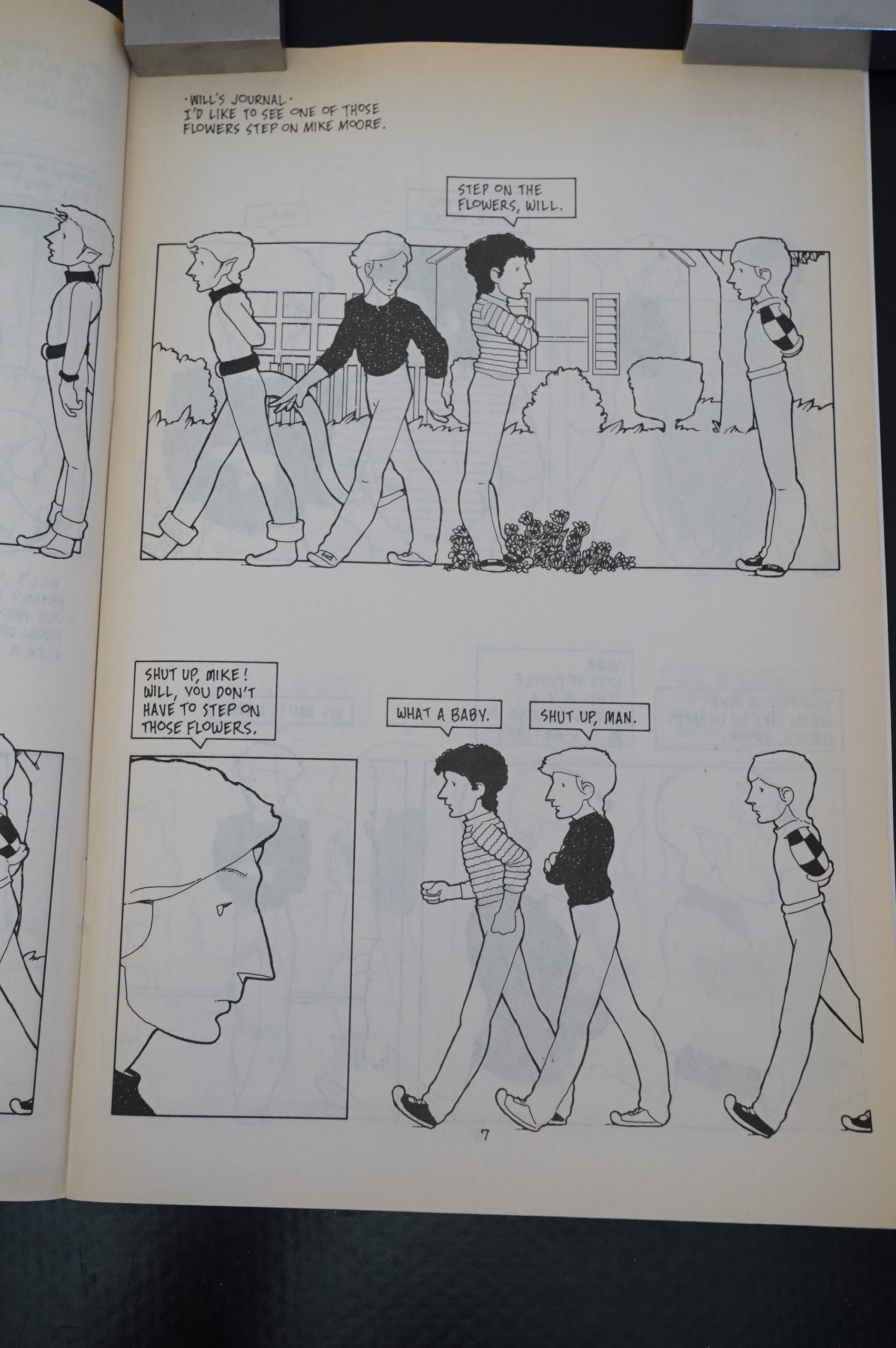 There’s also a lot of walking… and they all walk in step, very close to each other.

It’s so weird! I mean, it’s weirder than most experimental comics, and it’s kinda not — the plot (as it is) is straightforward and simple, with low stakes drama. 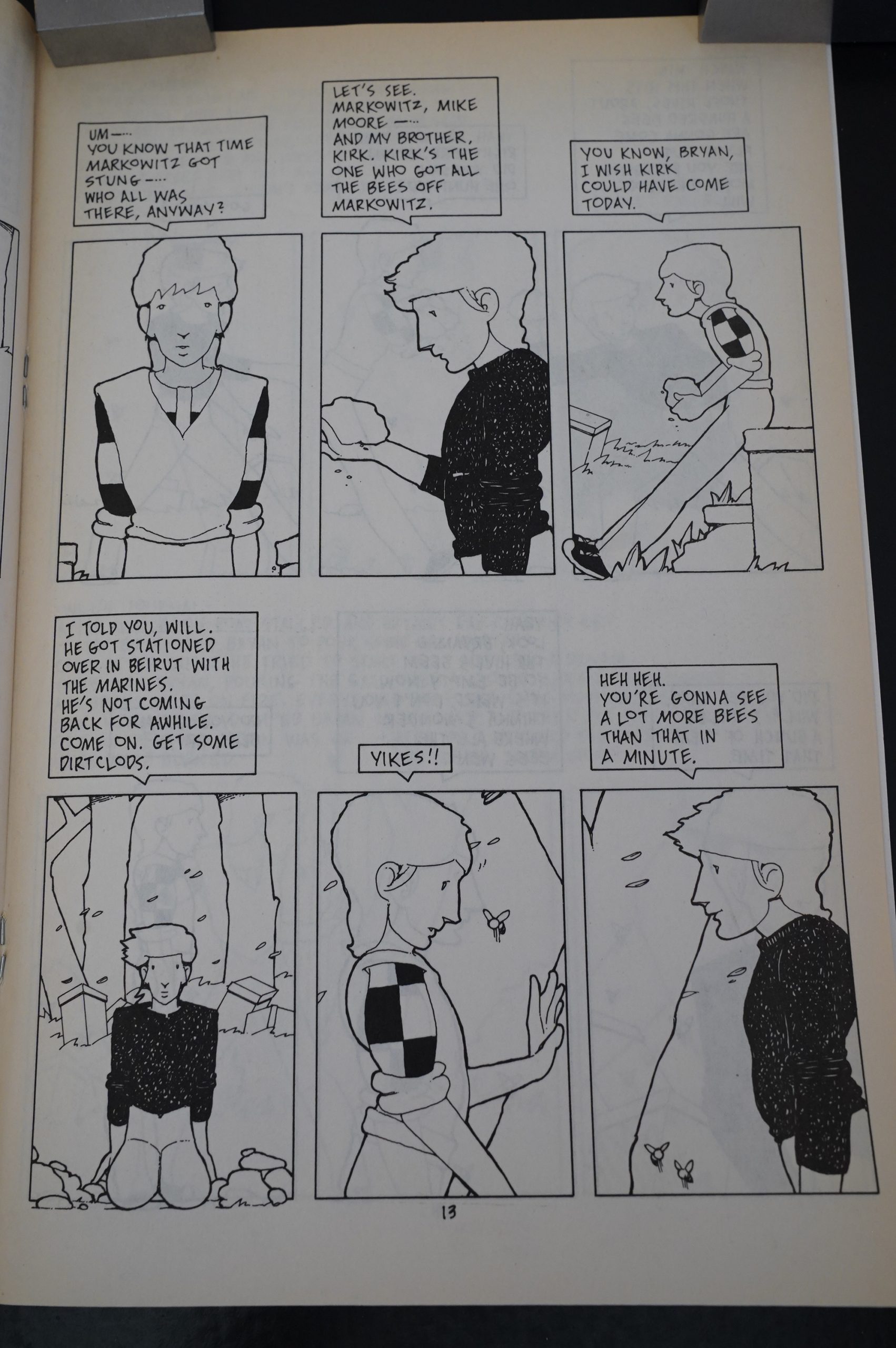 The first issue is about these two guys throwing mud at some beehives, because… because… that’s what kids do? We get no explanation… but the tough guy (with the interestingly white-stippled black sweater) tells us that his older brother is a marine stationed in Beirut. 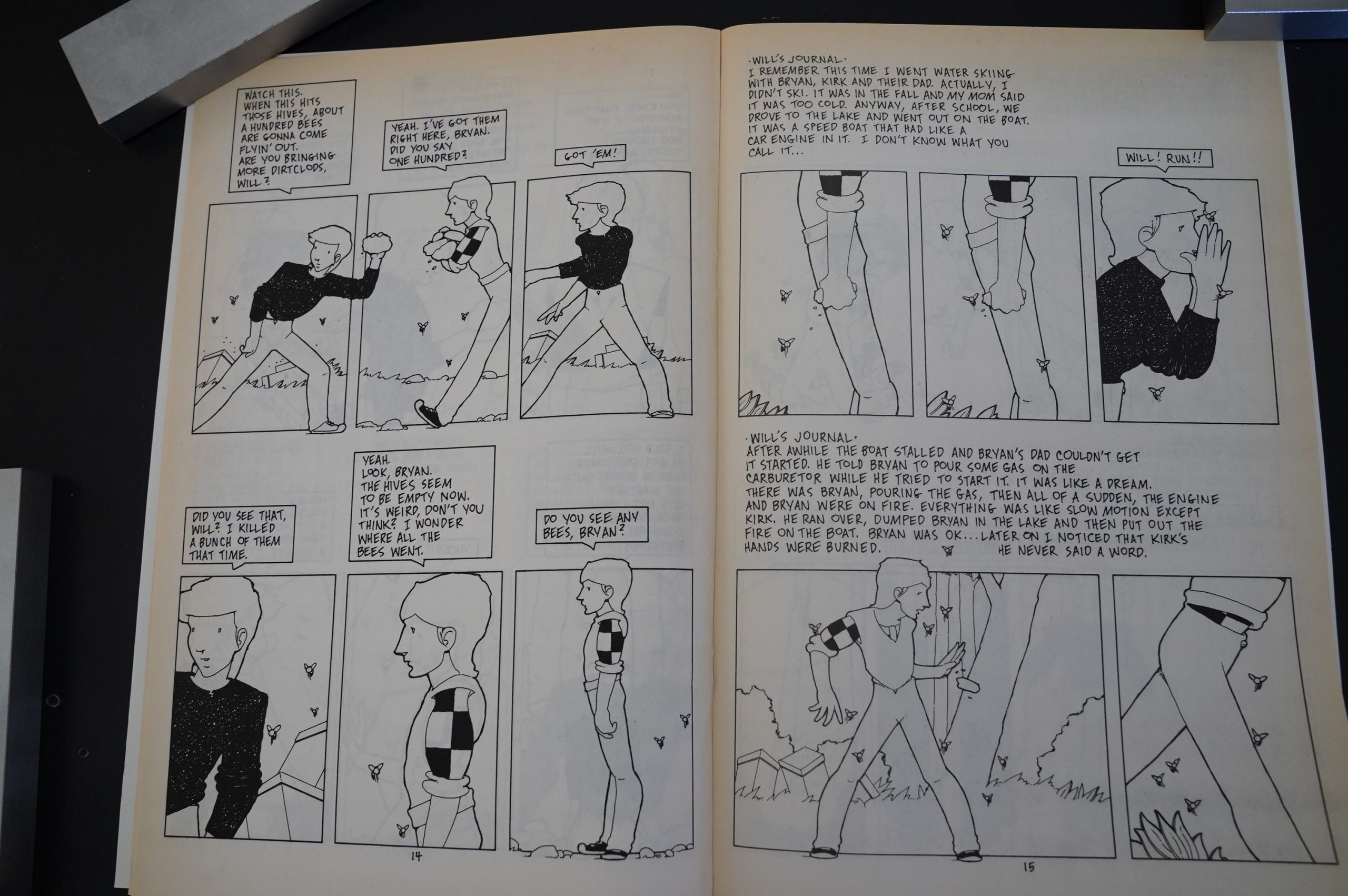 The storytelling isn’t dreamlike, and it isn’t nostalgic — it’s something that’s adjacent to both, but without hitting either. Here’s the dramatic beehive scene, and the excerpt from Will’s diary is about another incident altogether. 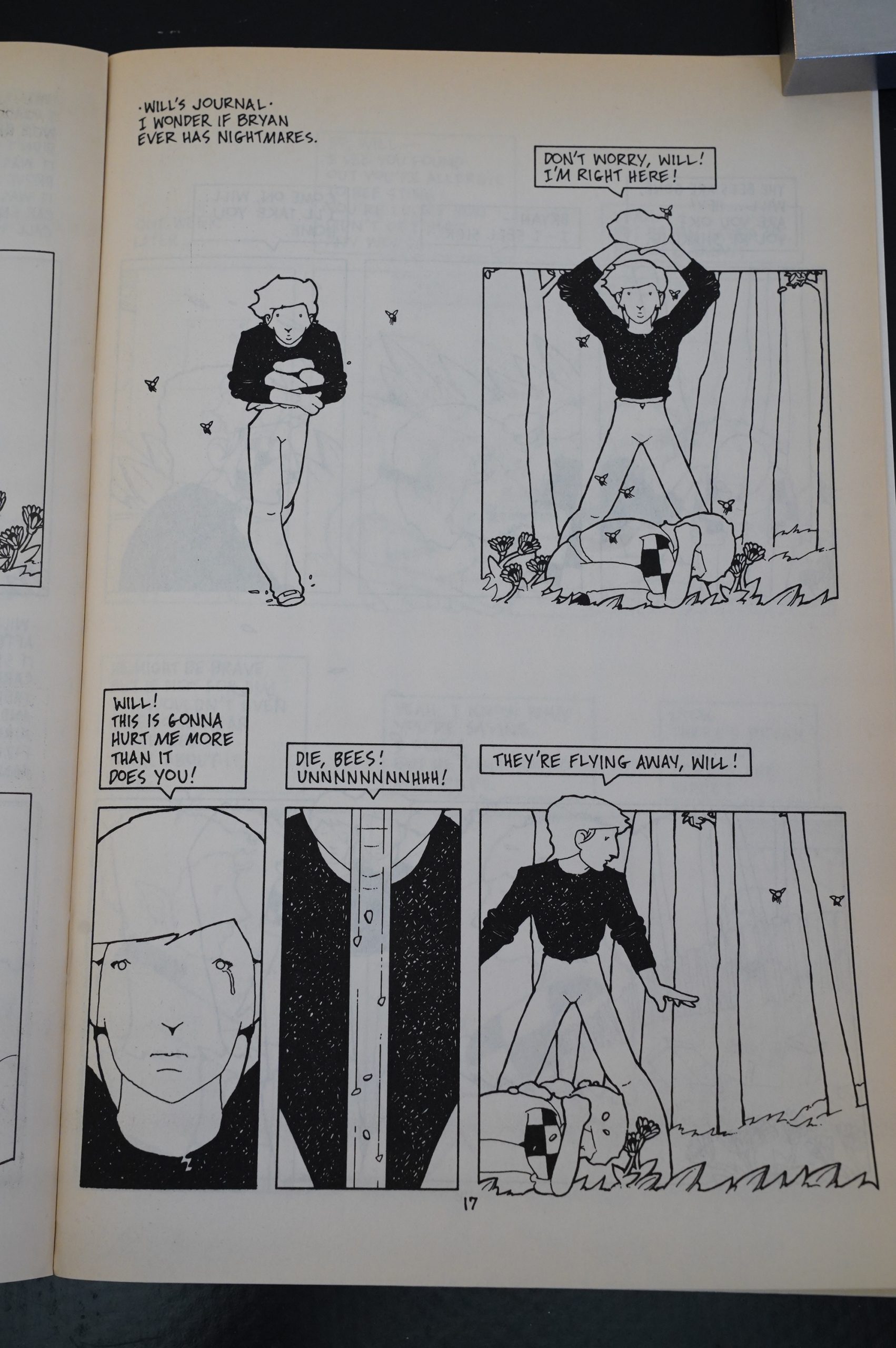 OK, while typing this, my normal scepticism rears its head, and I’m starting to think “is it possible that this is supposed to be a parody of something?” This didn’t occur at all to me while reading this, because I was sitting there, slack-jawed; amazed at what’s going on. 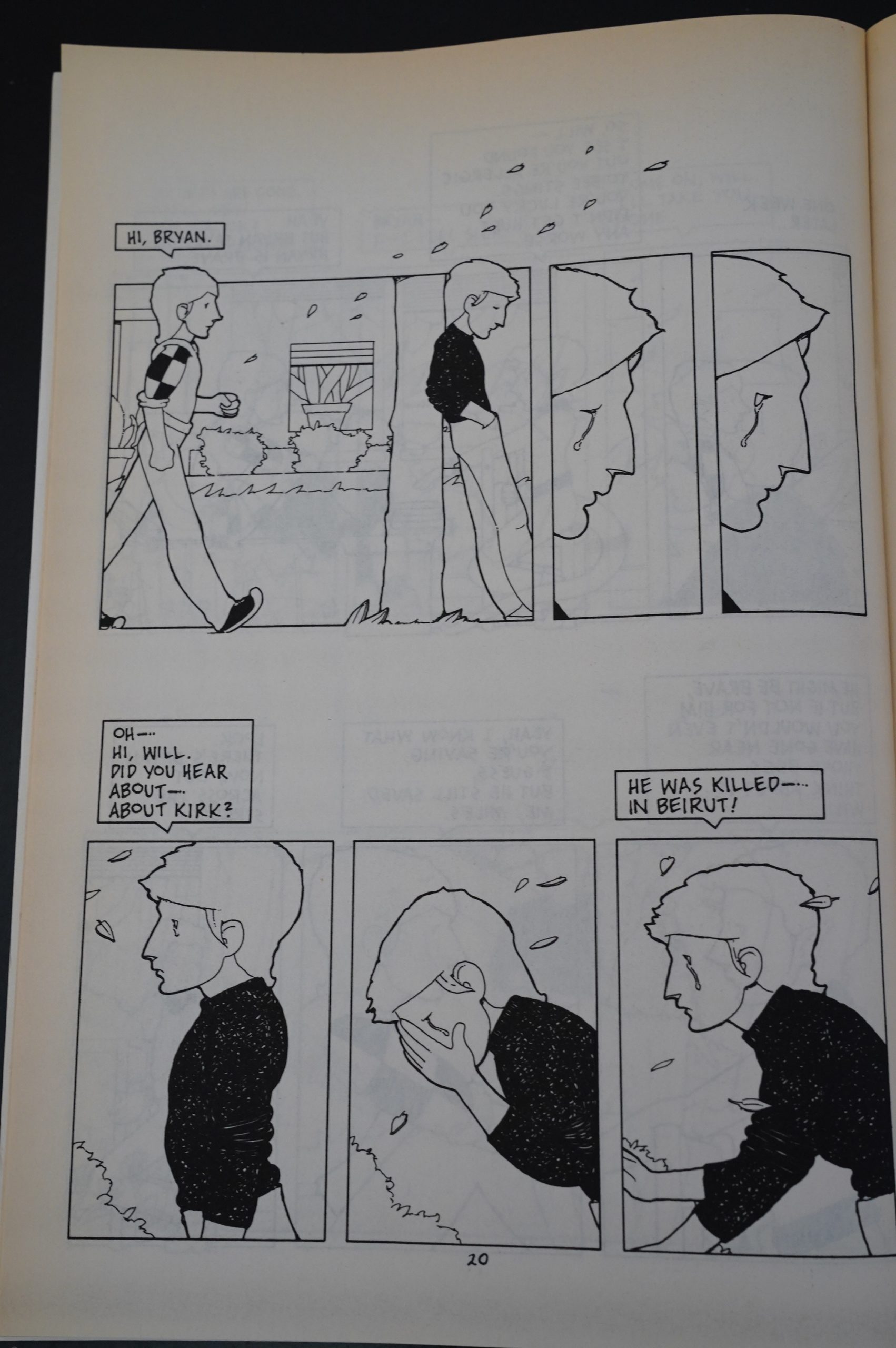 And then the Marine brother dies! Like that! Totally abruptly. 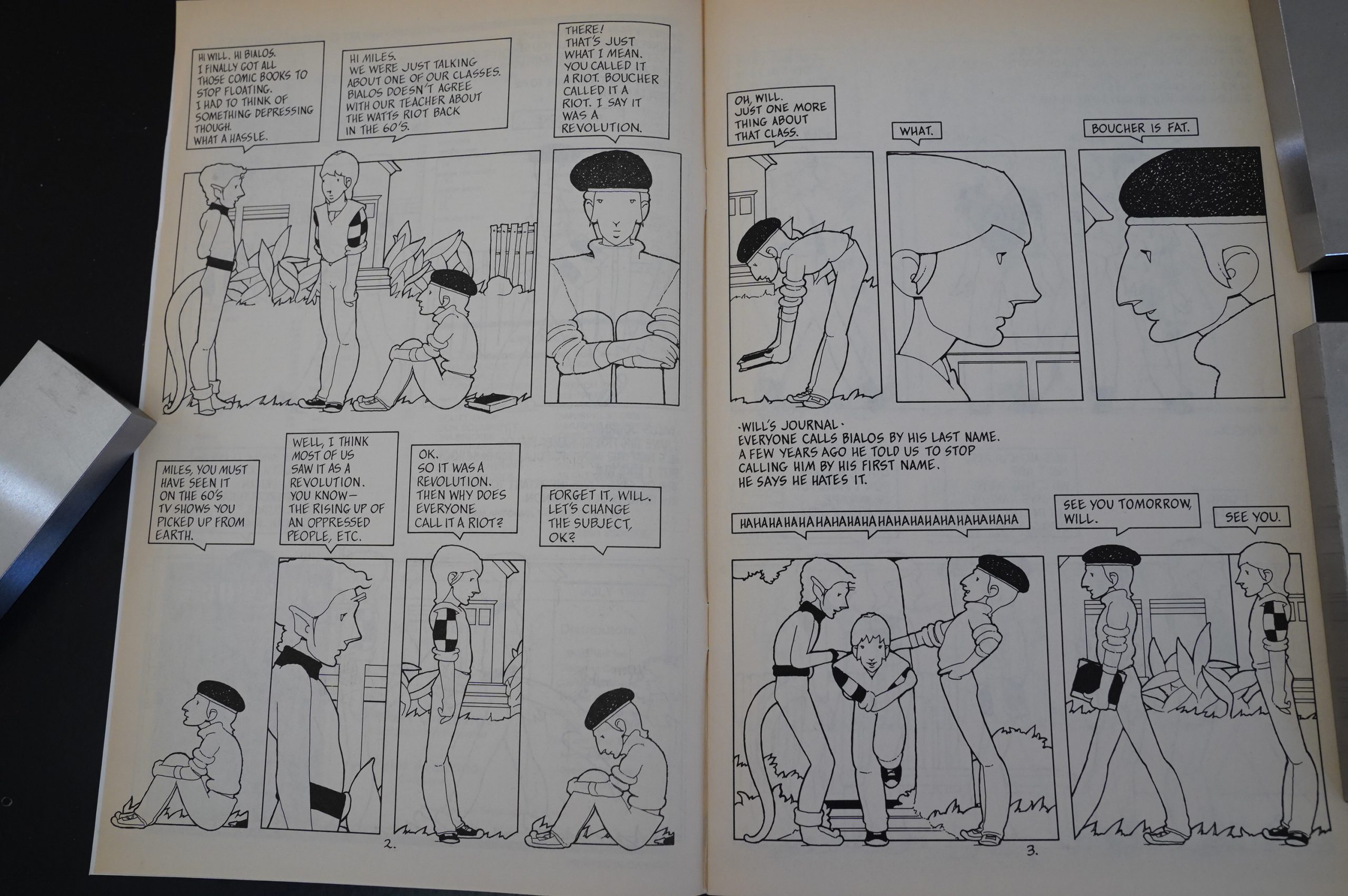 So on the left, we get into semantics about what happened in Watts in the 60s… and then on the right we get the only time the characters laugh, I think? 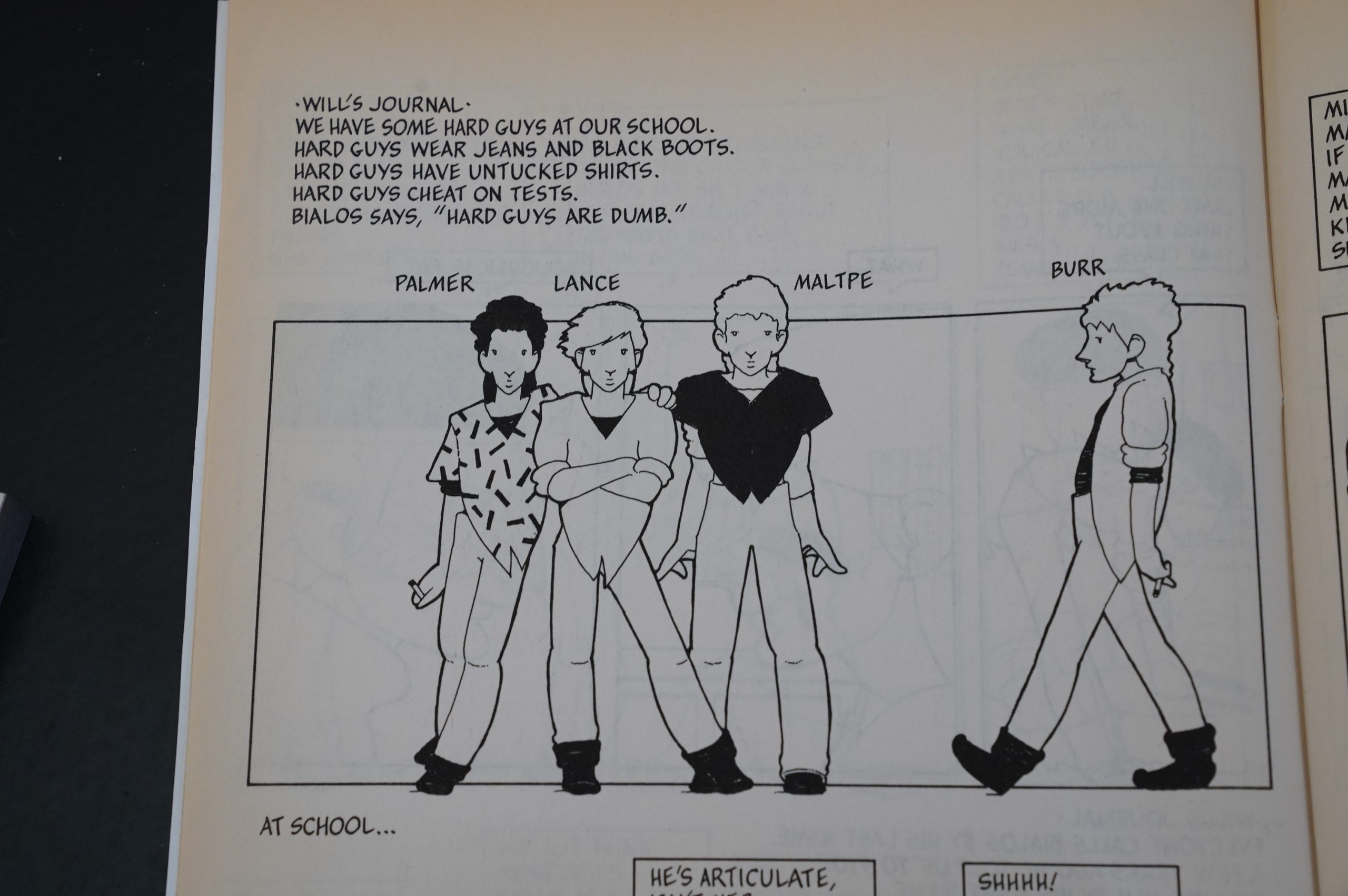 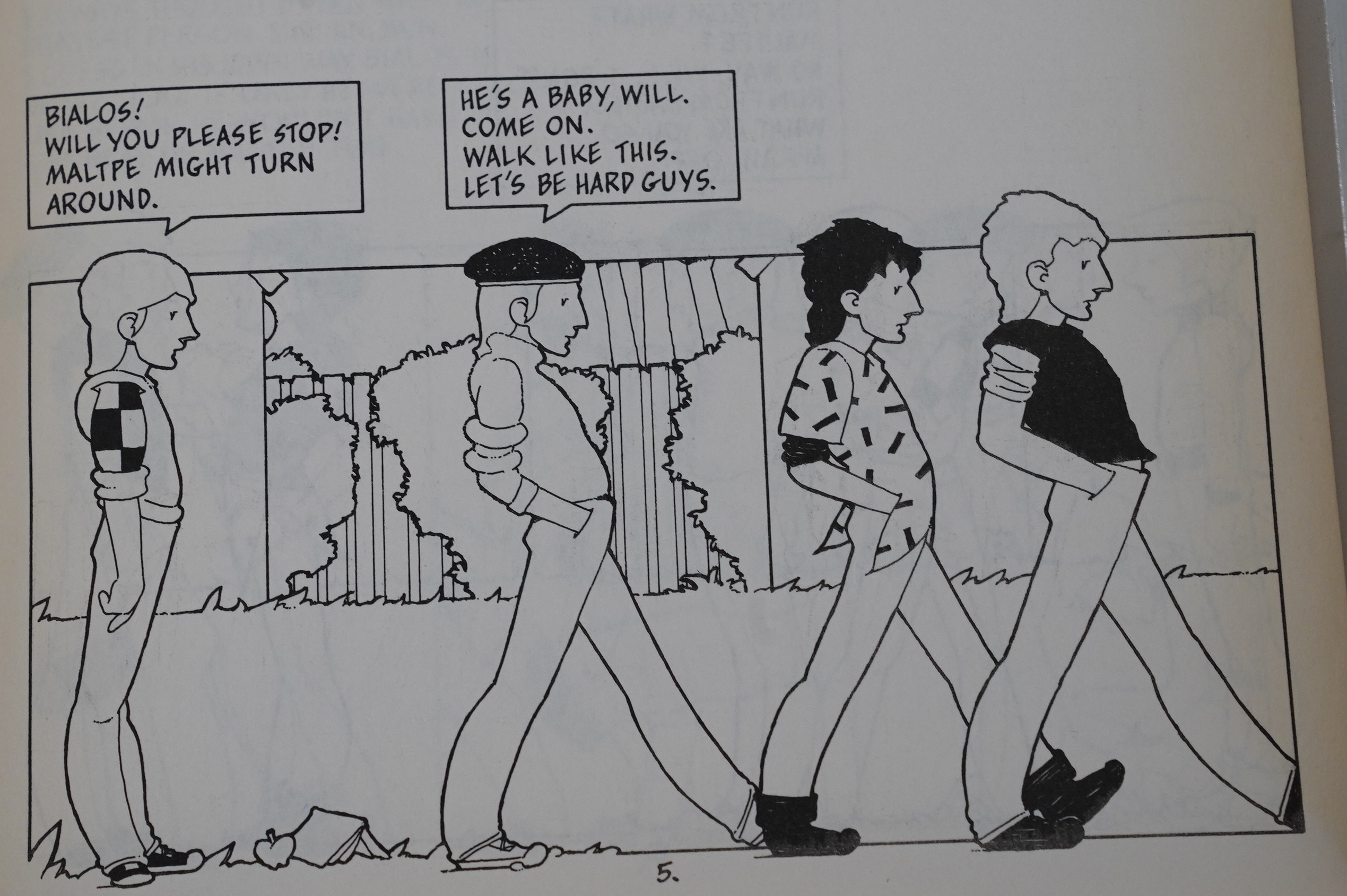 This is how to be a hard guy: This swagger, this strut. It’s a pretty subtle variation from how Dinardo’s other characters walk, but it’s still palpable. It’s like Dinardo is challenging himself to create a comic with only the most minuscule variations possible between the characters and still have it possible to read the differences — and he’s successful. 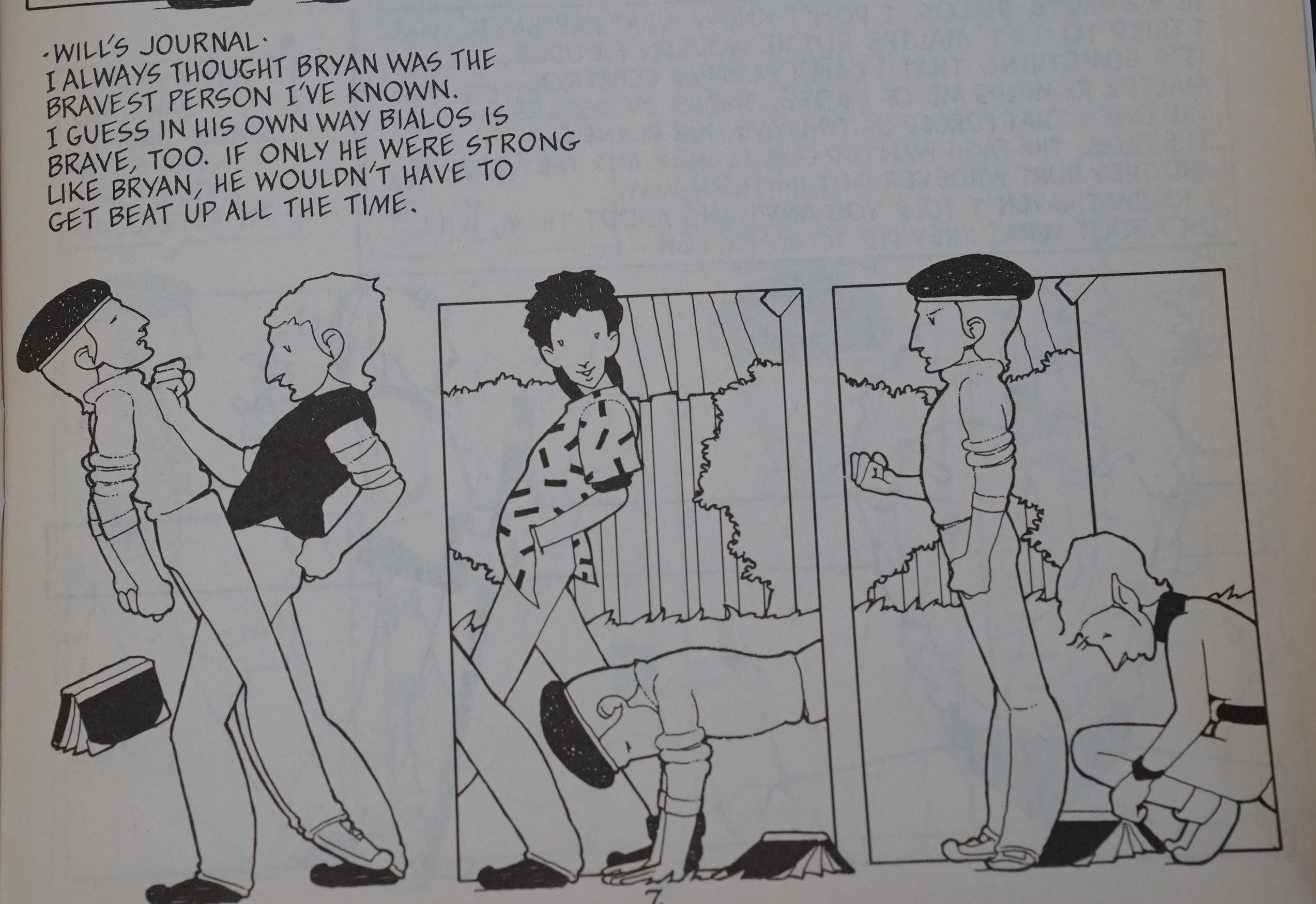 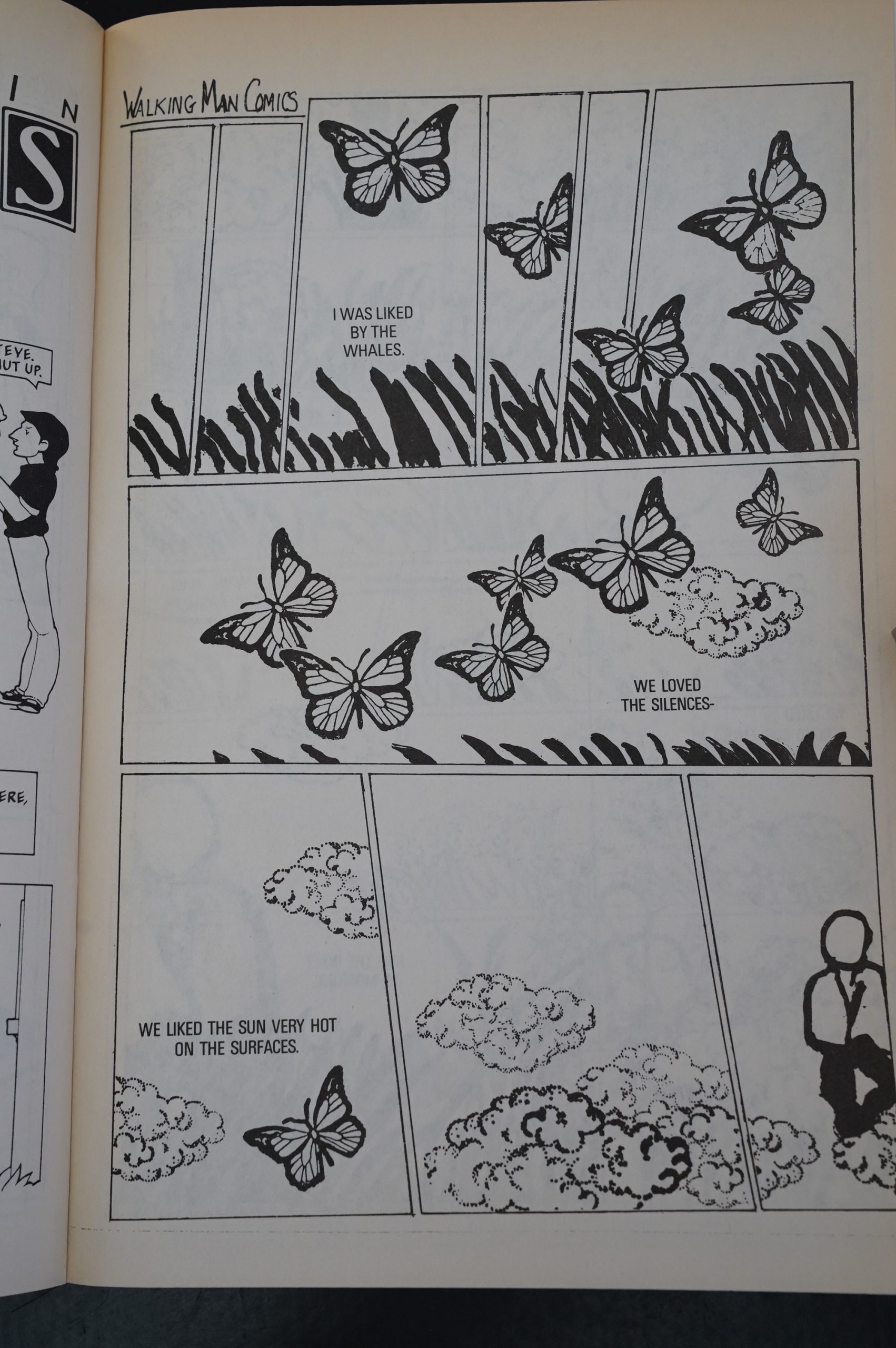 The first issue is 24 pages long, while the other two are 32, so we get a back-up story in those two issues. First out is a Walking Man Comics thing… I really like these? Is he using rubber stamps to create these comics? They’ve got a nice flow. 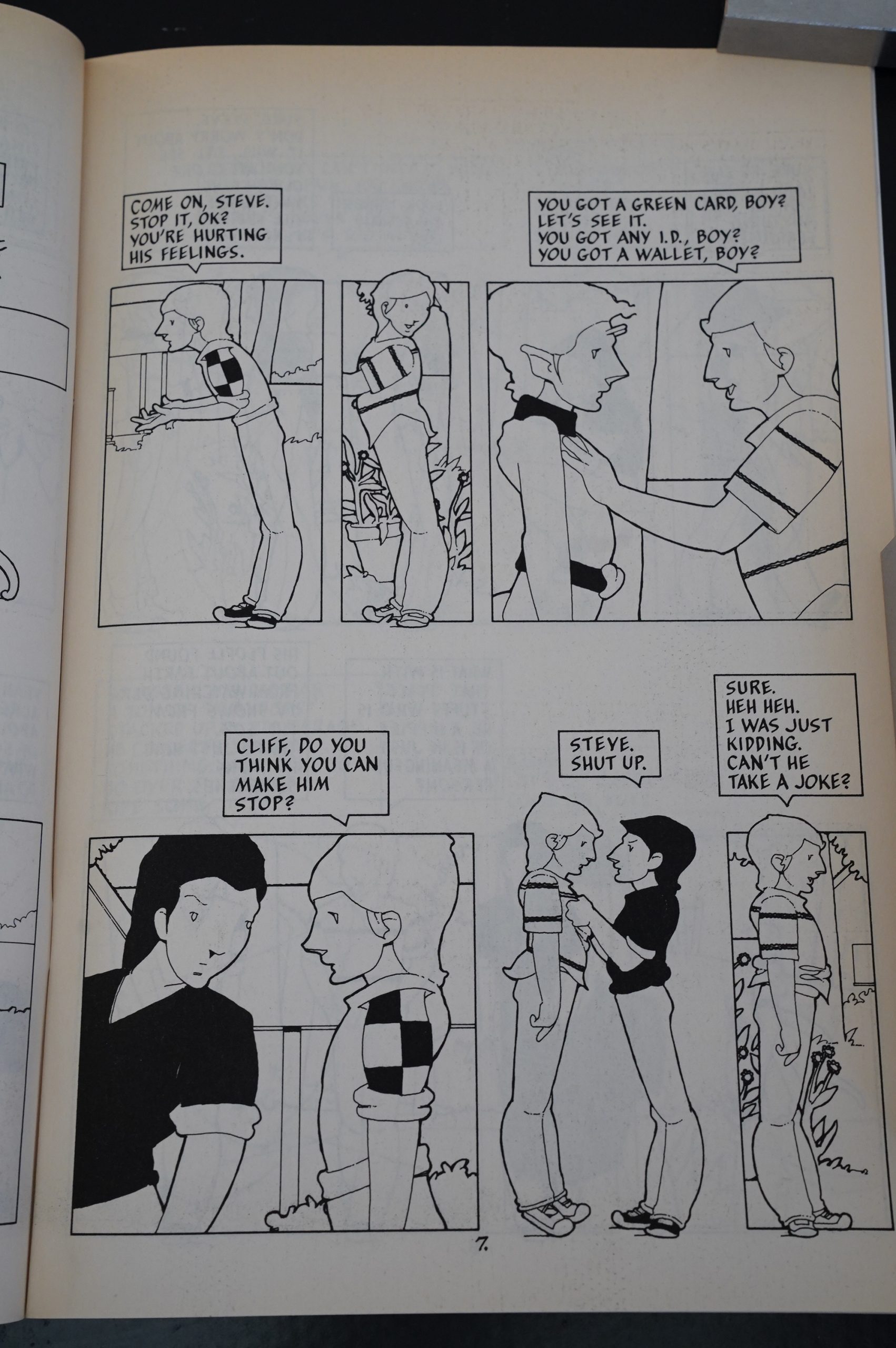 I guess some of the beats in this comic are reminiscent of sitcom abruptness. 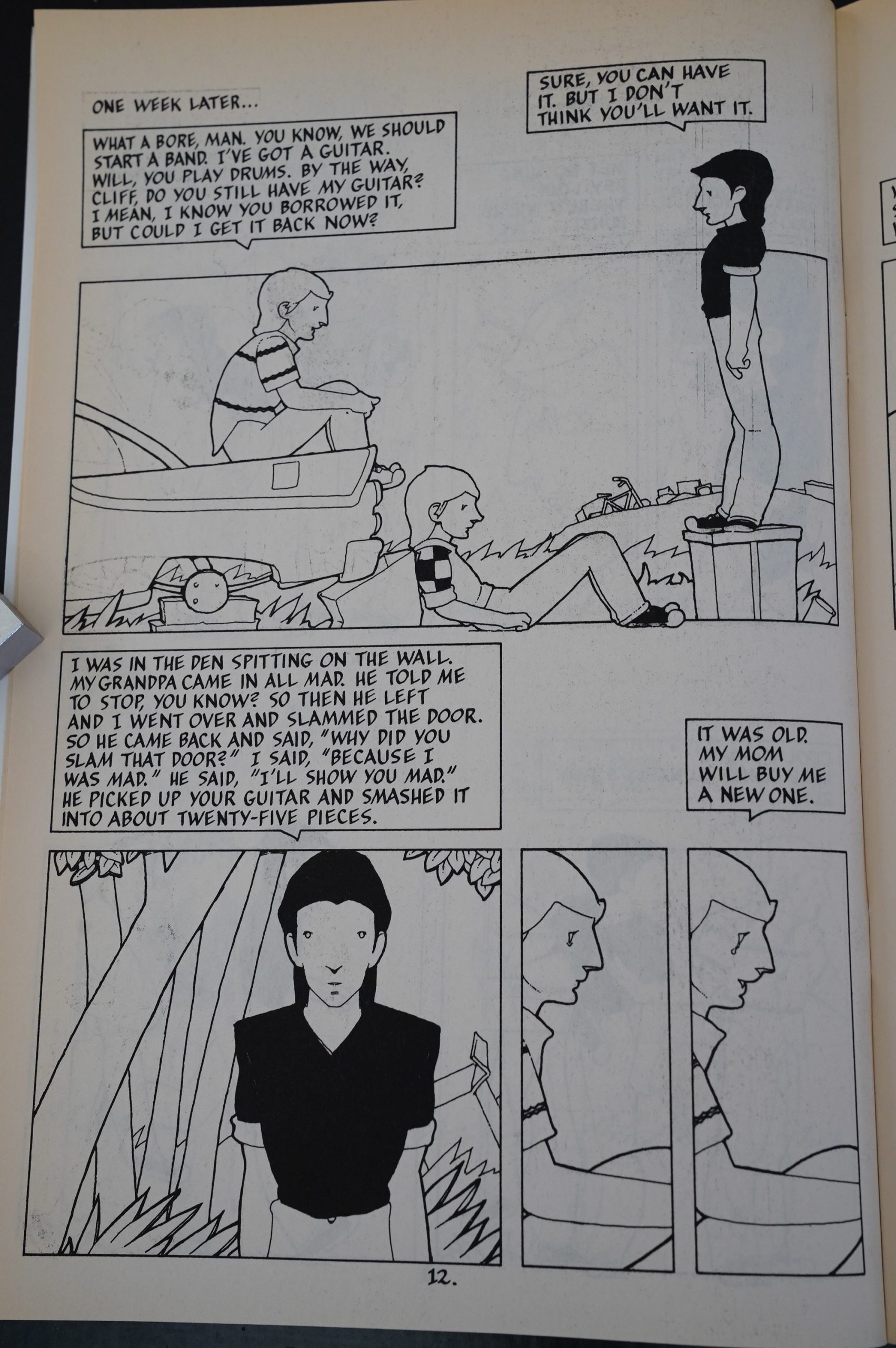 Most of the characters cry at one point or another, which isn’t very sitcom-like.

I love the posture on the guy on the ground in the top panel. 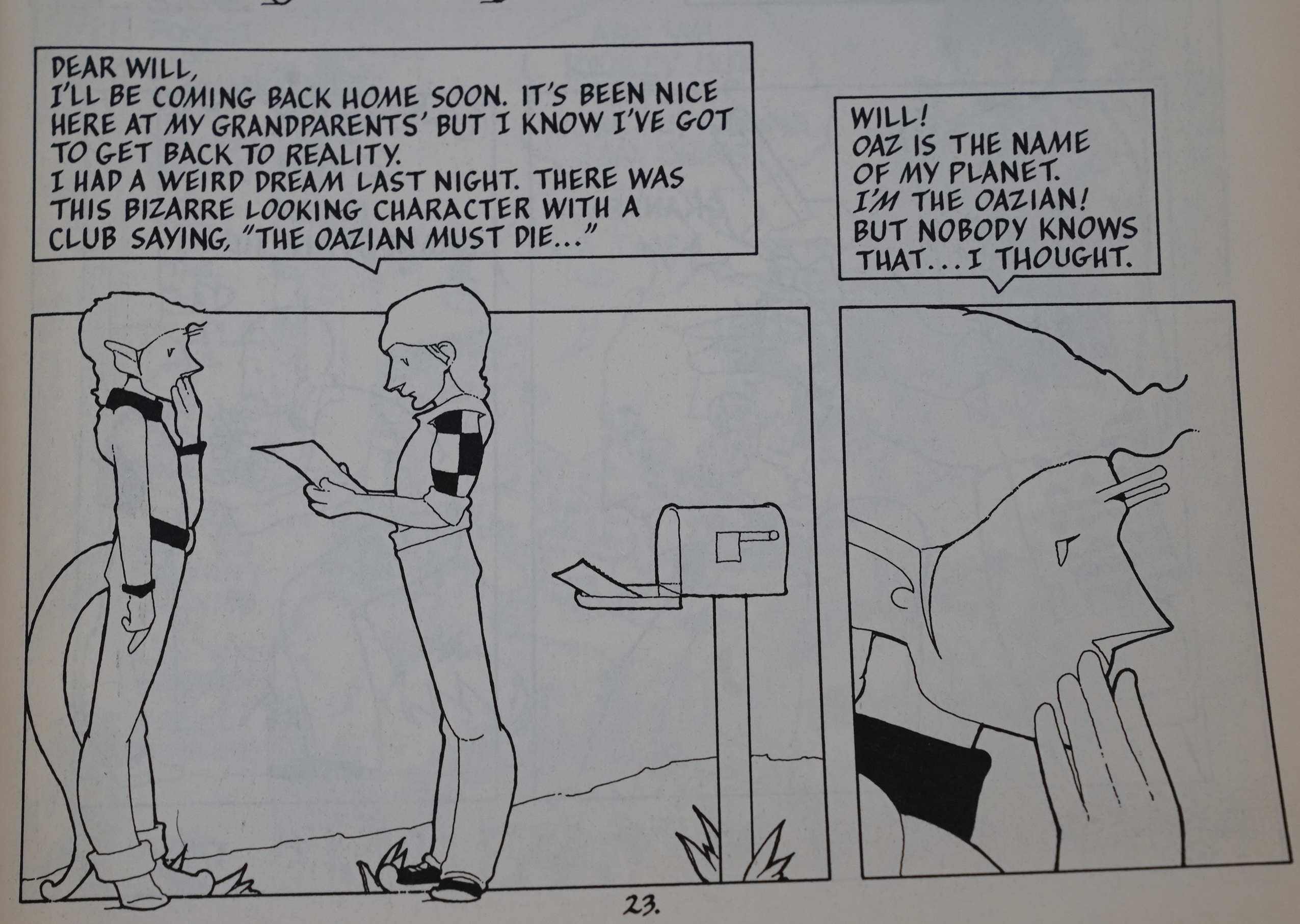 And then it ends. This is the final two panels. (Oh yeah, I didn’t mention that one of the guys is from another panel. It’s really not given much attention in the comic (I mean, aside from him being able to make things float), and it’s perhaps another sitcom-like thing. (Shades of Mork and Mindy.)

So there you have it: It’s just as odd as I remembered from when I read it as a teenager. Those short ankles, long thighs; the affectless faces; the gentle but weirdly affecting storylines…

It’s like nothing else, and it’s hard to even make a value judgement about this, because… what do you compere it with?

It’s a reading experience like nothing else, and I found it hugely enjoyable. *gasp* A girl! I don’t think there was a single other girl (or woman) in the rest of the book? 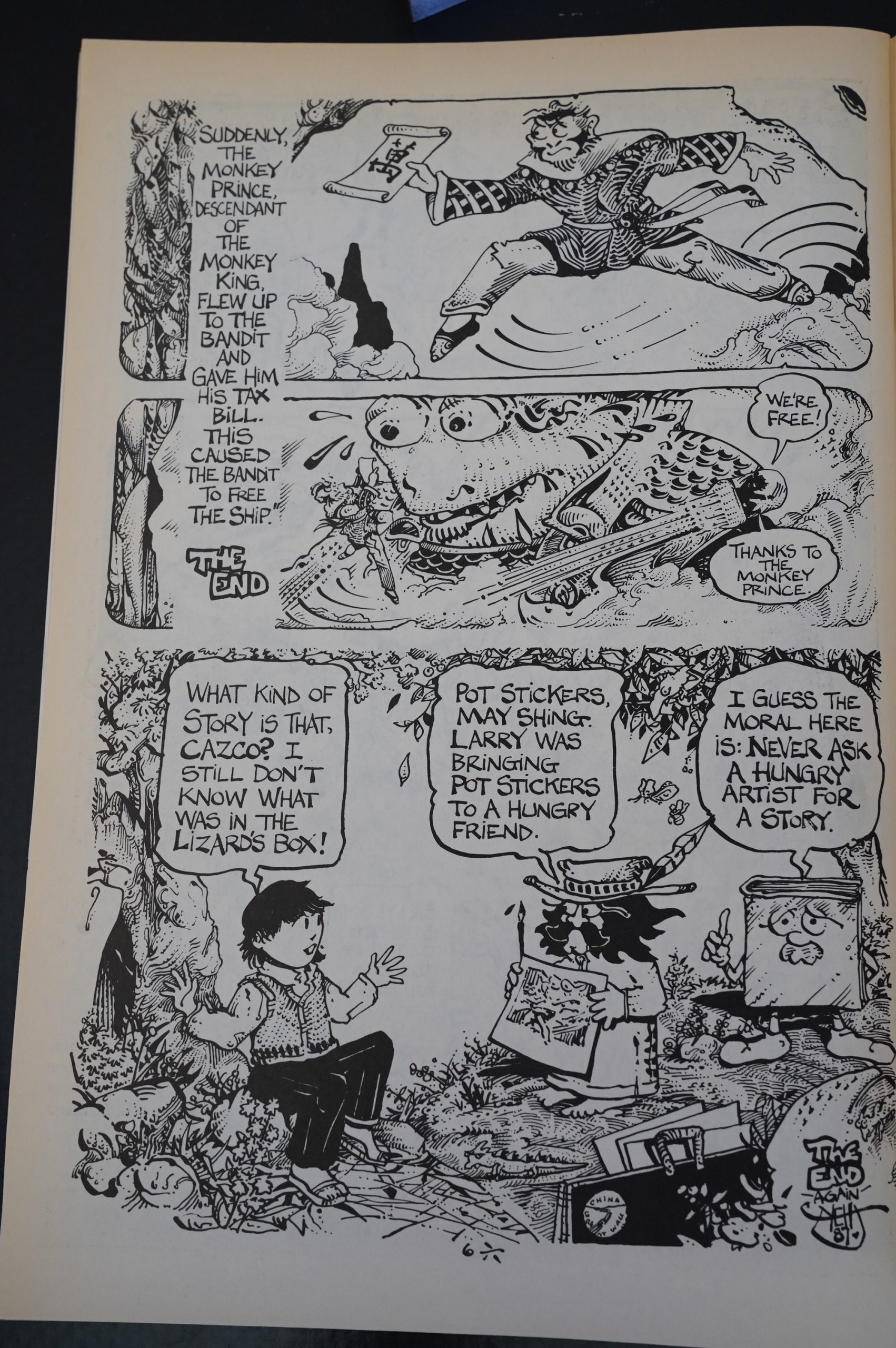 Phil Yeh (there’s another blast from the past) does the final back-up story.

Dinardo has apparently published no other comics besides this one and appearing in two of the Penguin and Pencilguin issues. (Two six page Friends strips, apparently — I don’t have those issues.)

Googling around led me to this Bill Dinardo, who I wasn’t sure was the right one… until I followed the link to his etsy page. 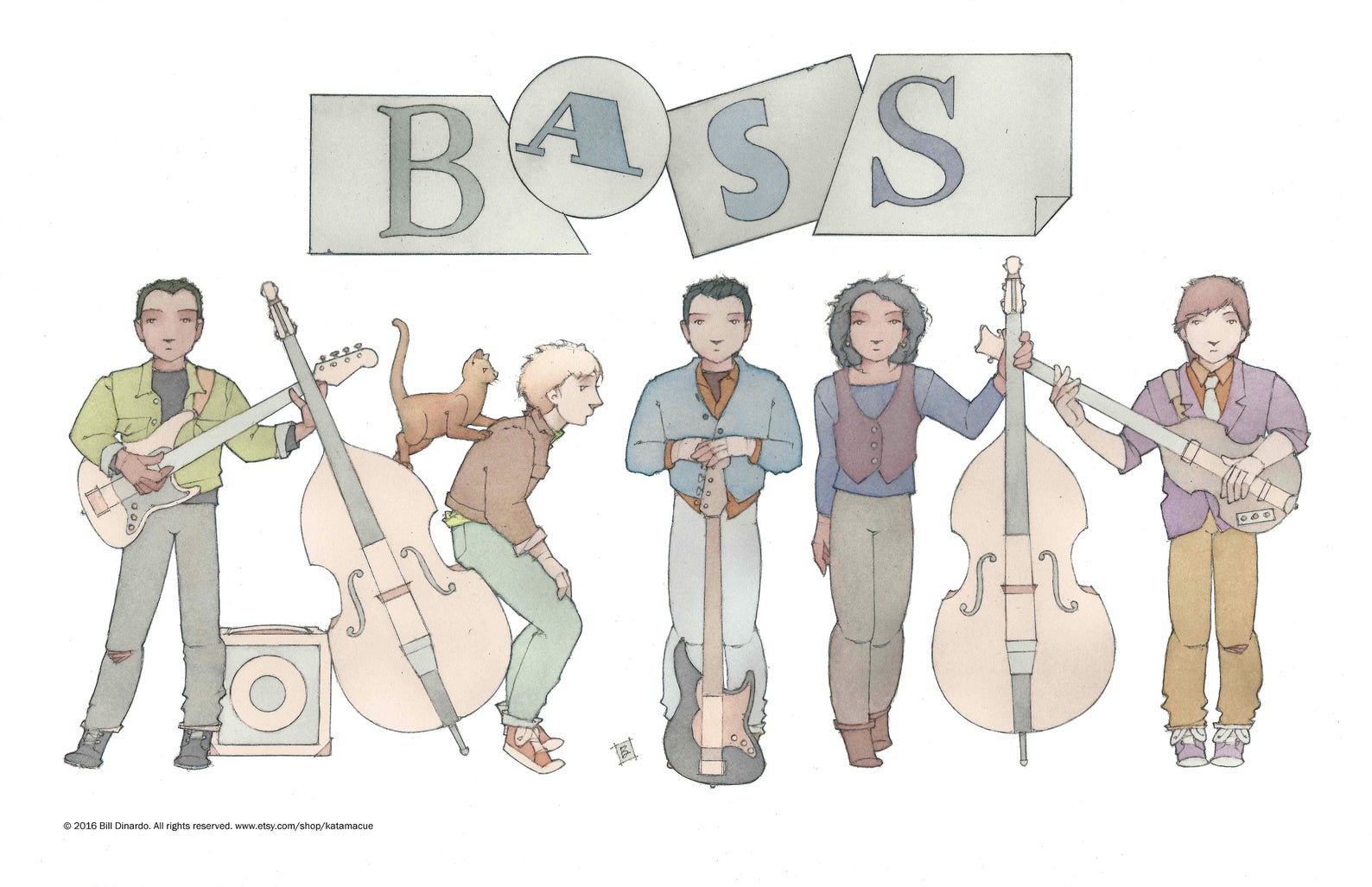 Friends has never been reprinted, but you can still pick up the series cheaply: 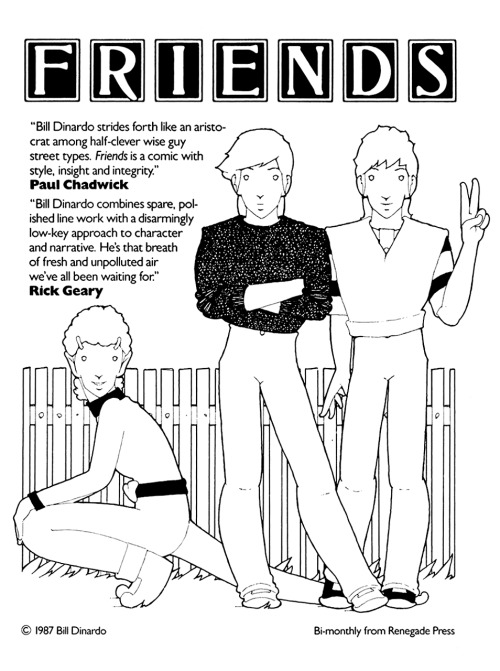 Renegade got quotes from some very appropriate creators — Rick Geary is super quirky, and Chadwick was going for some gentle storytelling…

Oh, Dinardo was also in an issue of Patrick Rabbit.

Will and his alien friend Miles continue to
learn about different types of courage in
Bill Dinardo’s whimsical Friends.
Courage, he says, is one. of the main
ideas behind the series. For instance, the
first issue dealt with Brian, Will’s physic-
ally strong friend. Subsequent issues will
similarly spotlight Will’s other friends (hey,
dat’s de name of the book, gang), while
gradually revealing more of the story of
why Miles was forced to leave his home
Planet.
The second issue spotlights ßialos.
‘ “He’s brave, but he’s not physically
strong, like Brian,” Dinardo explains. “But
he’ll never back down from what he thinks
is true.” This determination gets Bialos,
Will and Miles in trouble with some tough
kids known as the Hard Boys.
There’s also Cliff, who’s a bit of a bully,
and Steve, the class clown. In the second
issue we’ll see one of the Pags, the alien
race who devastated Miles’ home. In fact,
the Pags will play a more important role
as the series progresses. Still, Dinardo
shies away from the term “science fiction”
for the book. “It’s more of a day-in-the-life
sort of thing. It’s basically Miles showing
something to Will that will help him to
become a more complete human being.”
The book will probably have a back-up
series. Matt Levin’s idiosyncratic “Walking
Man” will be featured in several issues.

Bill Dinardo’s whimsical “Friends”
continues as the back-up strip. Though
the regular series from Renegade has
been cancelled, Dinardo still plans on
finishing up the story of Bialos and the
mystery of Miles and the Pags some
place and some time.

I’m unable to find anybody talking about Friends on the intertubes. Dinardo has a strip about grammer, though. Here’s a sample: