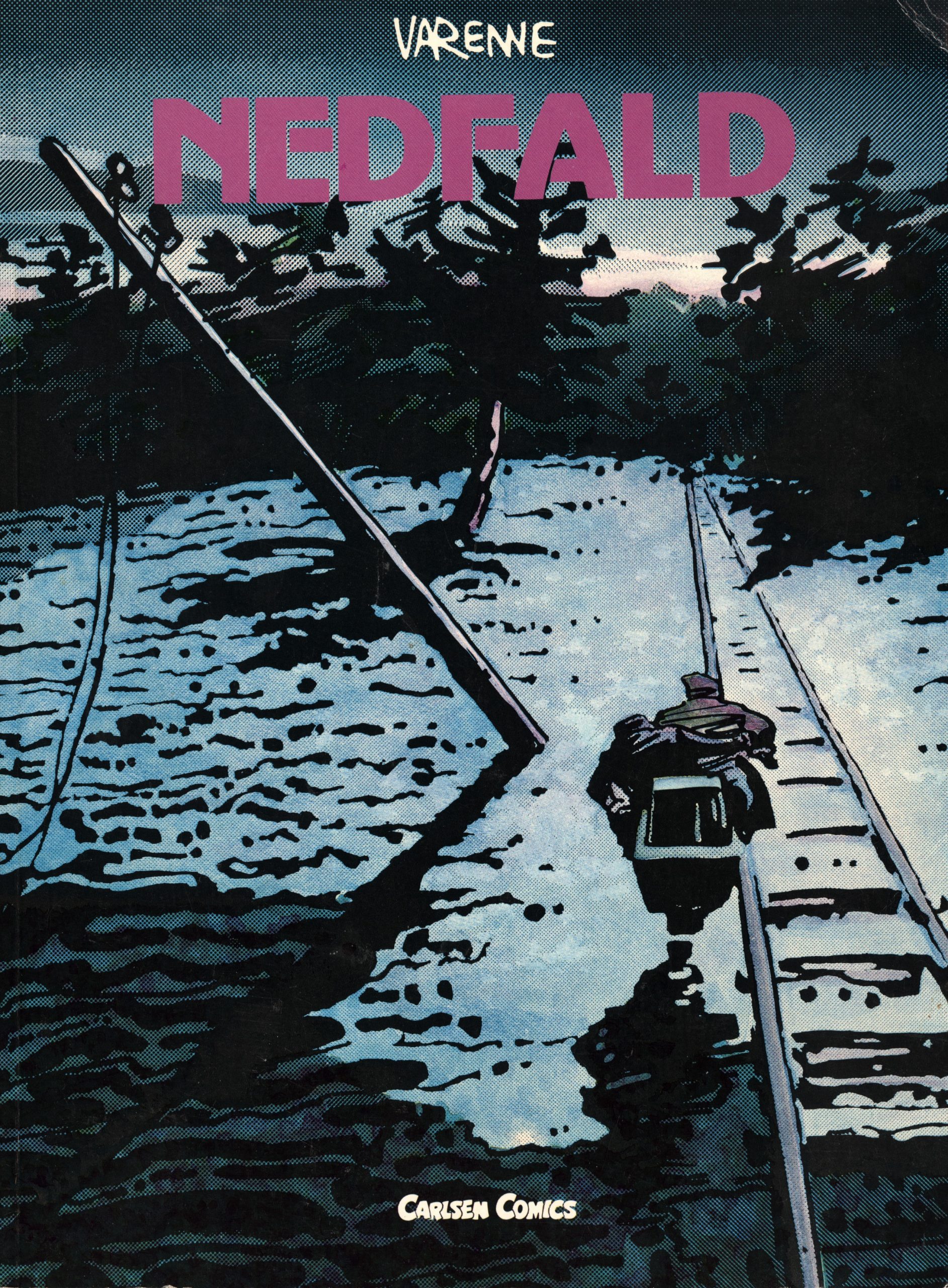 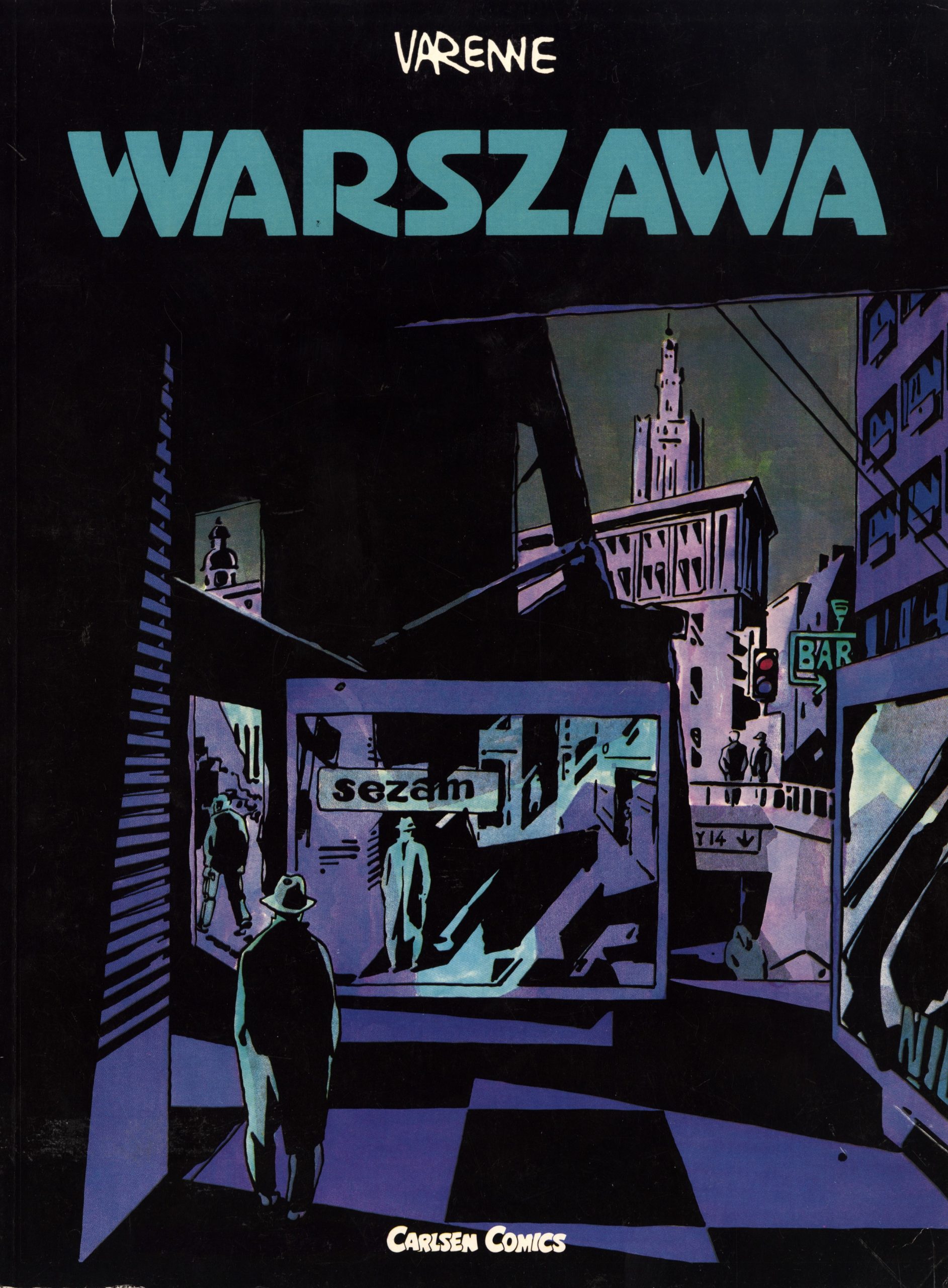 This (sort of) dystopian post-WWIII series was published as a serial in Charlie Mensuel between 1979 and 1986, as far as I can tell. I say “sort of”, because where it starts out isn’t where it (sort of) ended up.

Ok, here’s how it starts: 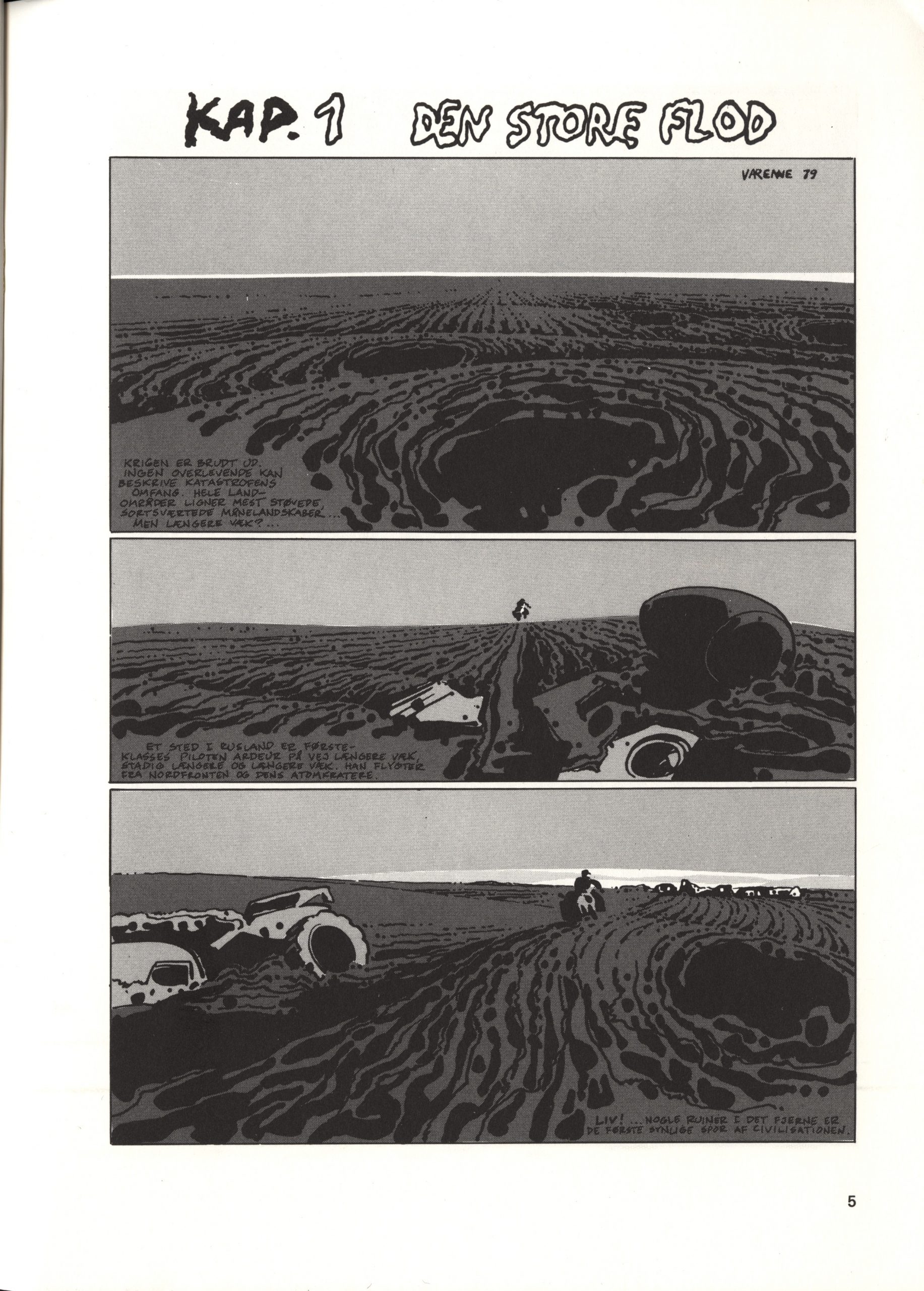 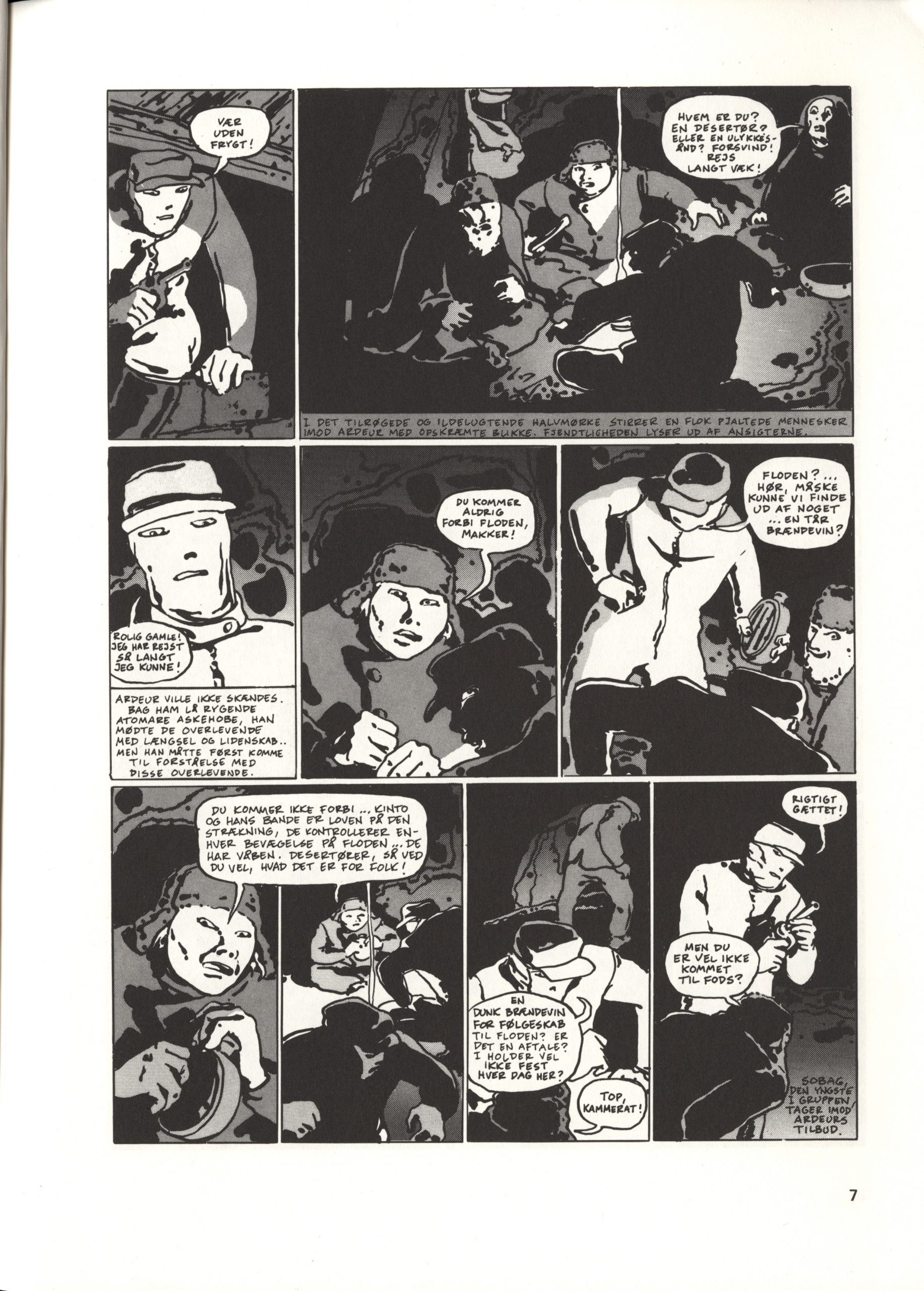 A pilot (the titular Ardeur) is trying to get back home to France after the world has been (pretty much) destroyed by a nuclear war. He’s been horribly burned himself, and that’s why he wears that mask.

It’s quite punk. The similarities between the above and (the later) Jimbo nucular stuff (by Gary Panter) displays a similar aesthetic, don’t you think? Although Alex Varenne is a lot older than Panter — Varenne was born in 1939.

And what about this great page? 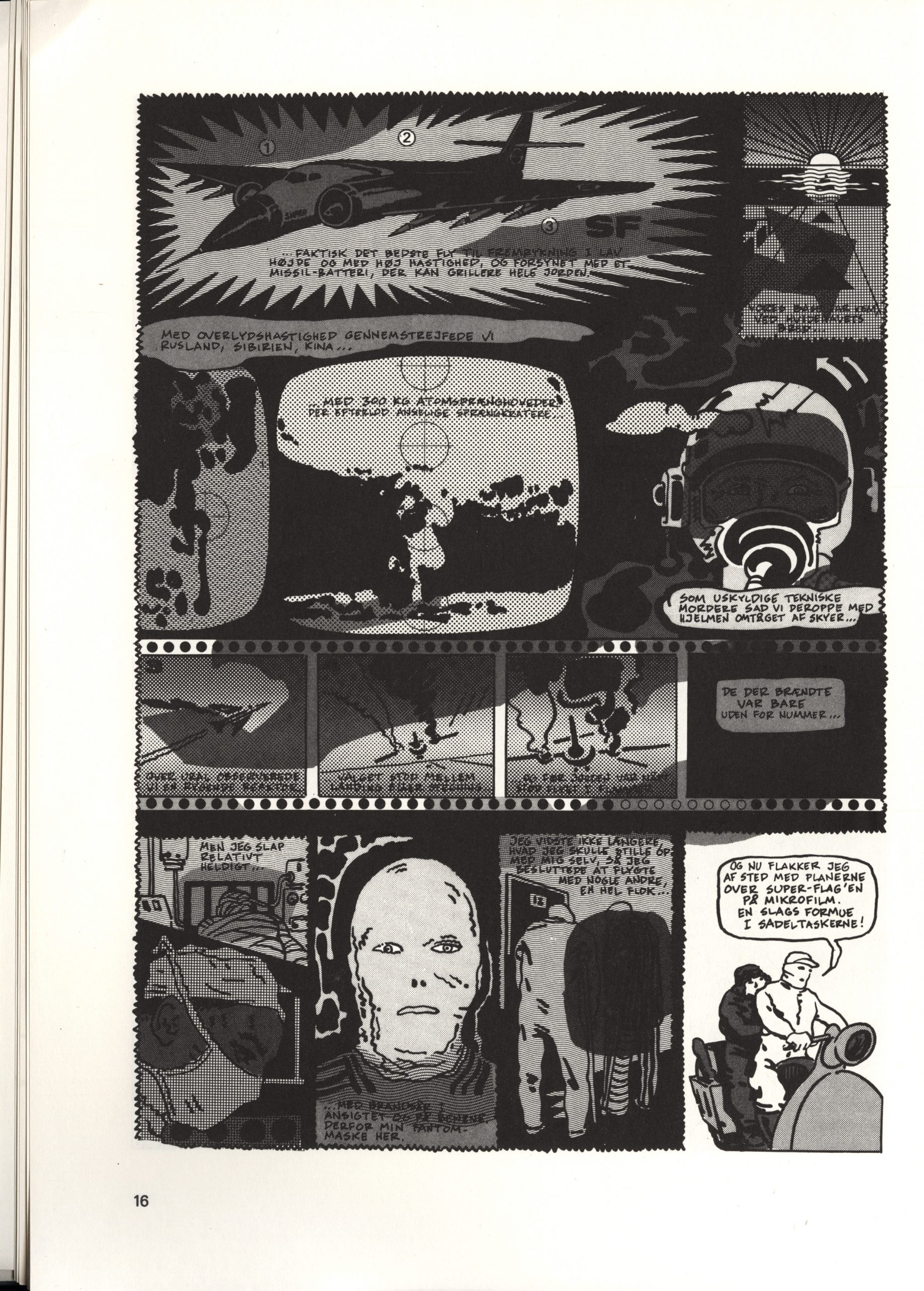 Anyway! The story. Ardeur winds his way to Warsaw, and it turns out that he has a secret microfiche with plans for a new, deadlier plane (bits of some factions have survived, you see). And then he (and new friends) get involved with scull and dagger stuff possibly on behalf of one secret service or other… One of the agents is even called James Mumble Bond. 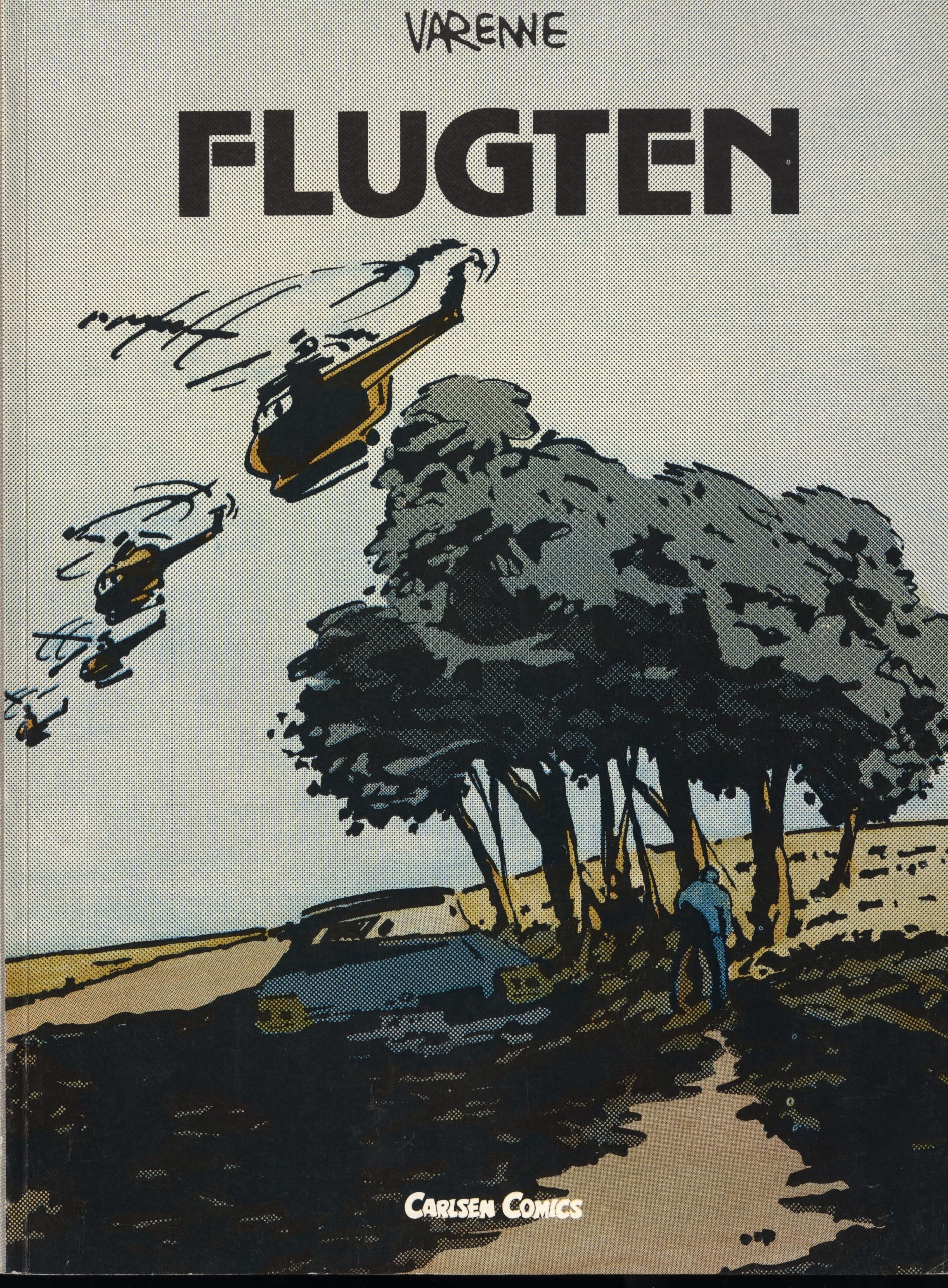 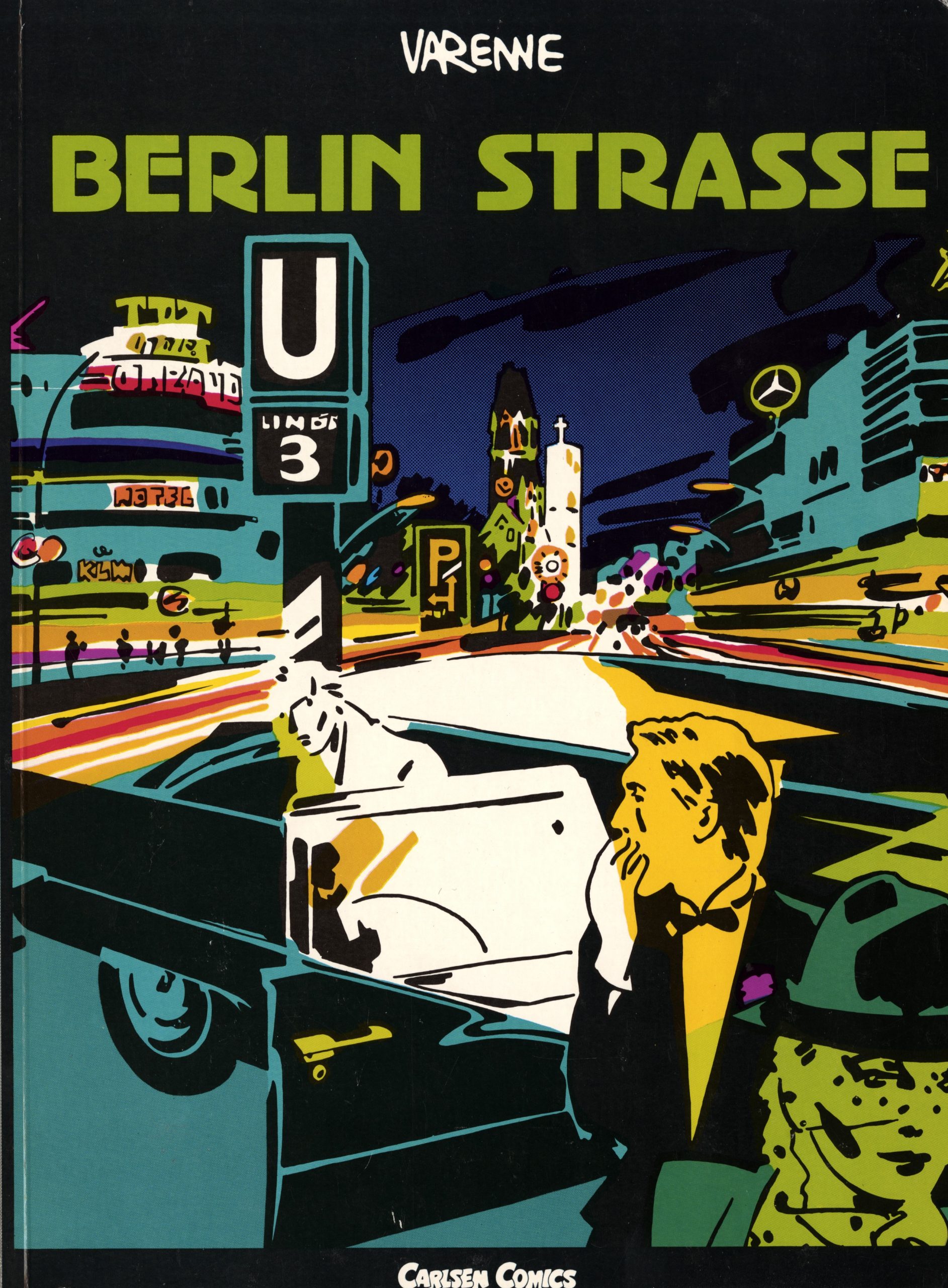 We move to Berlin and… seem to totally forget that we’re in a post-WWIII world. It’s not mentioned a lot after a couple hundred pages, at least. Instead there’s more … intrigue.

The art continues to evolve at a rapid clip. Alex Varenne has used heavy zip-a-tone from the start, but it gets less pop-art-ey and more expressionist. Or something. Kinda gorgeous, whatever you’d call it.

On some pages, though, perhaps this absent-minded toning doesn’t quite work? 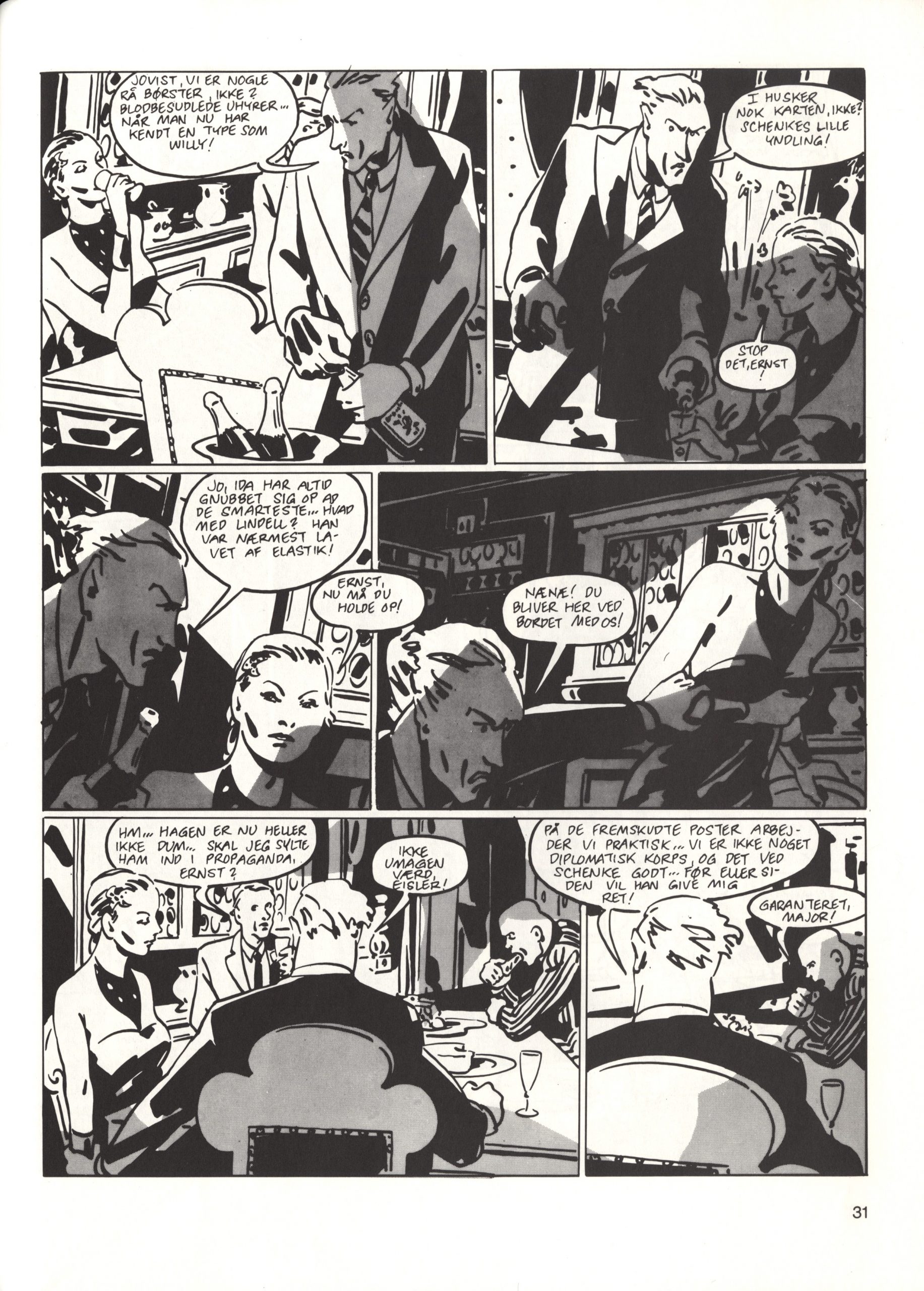 The zip-a-tone covering the guy in the first panel, for instance…  Hm… 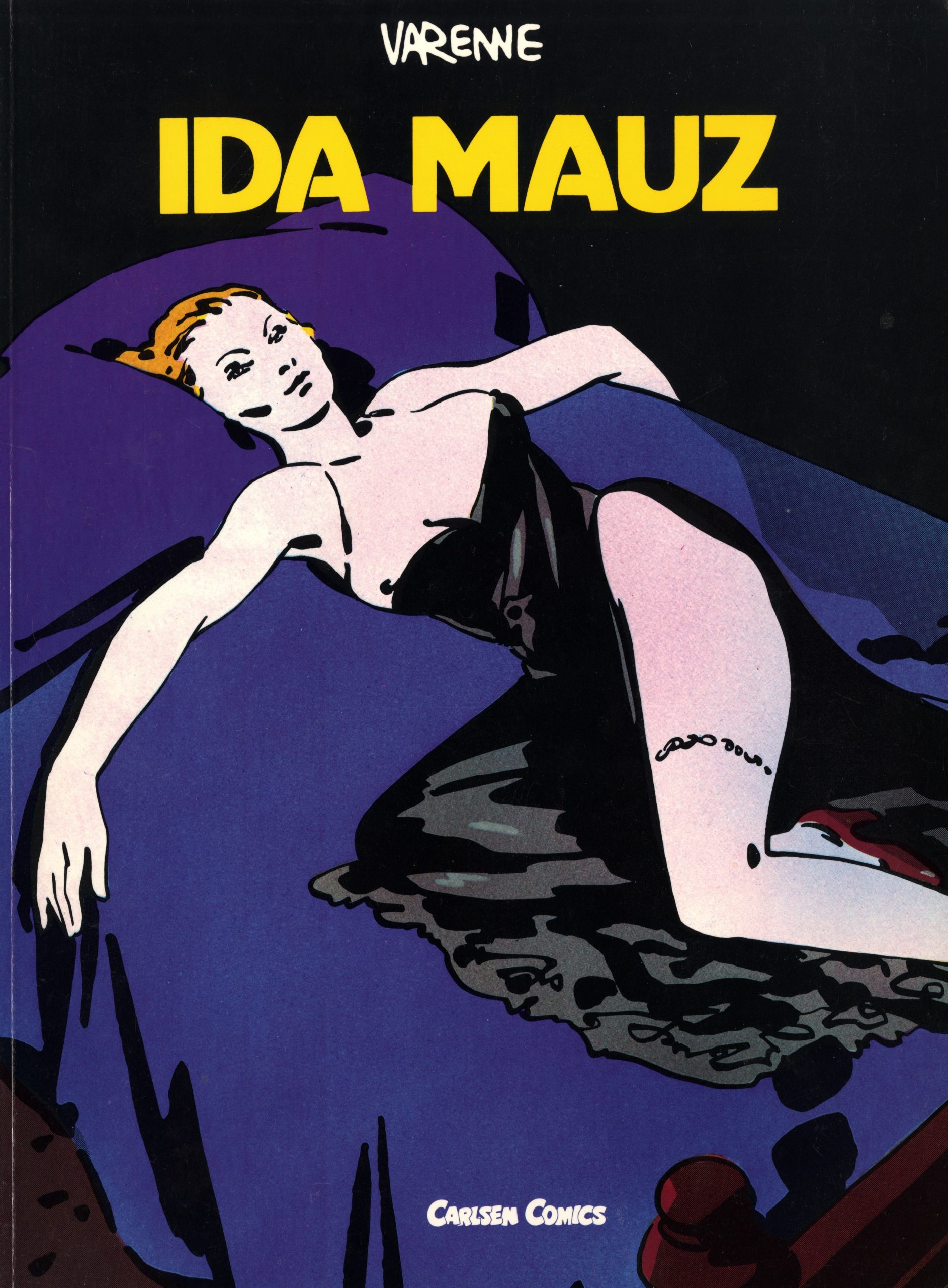 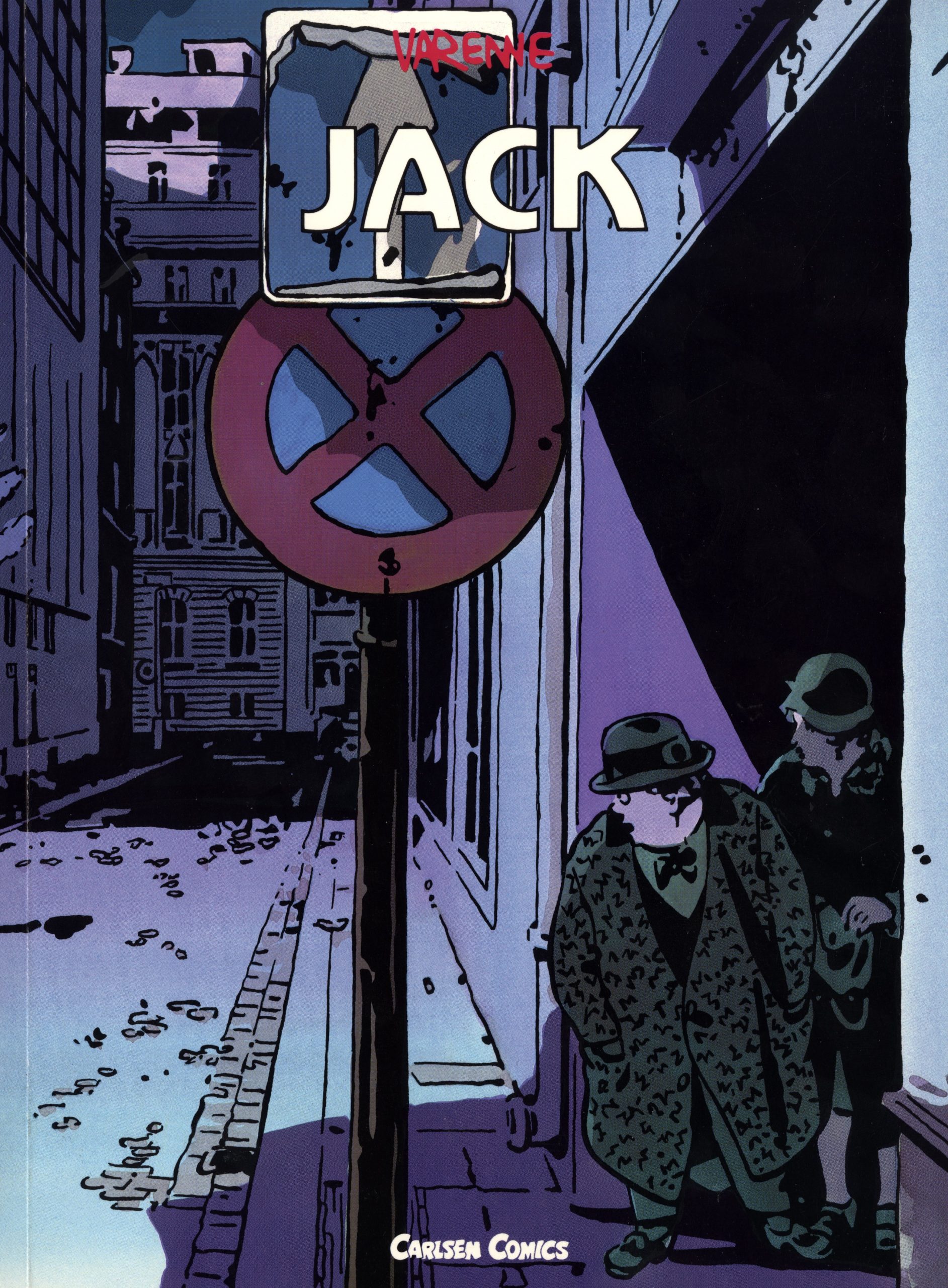 Charlie Mensuel ceased publication around the time that the series ended. Or rather, it was merged with Pilote and called Pilote et Charlie. Perhaps that’s why it stopped? Or perhaps the Varenne brothers grew tired of it and didn’t know where to take it? 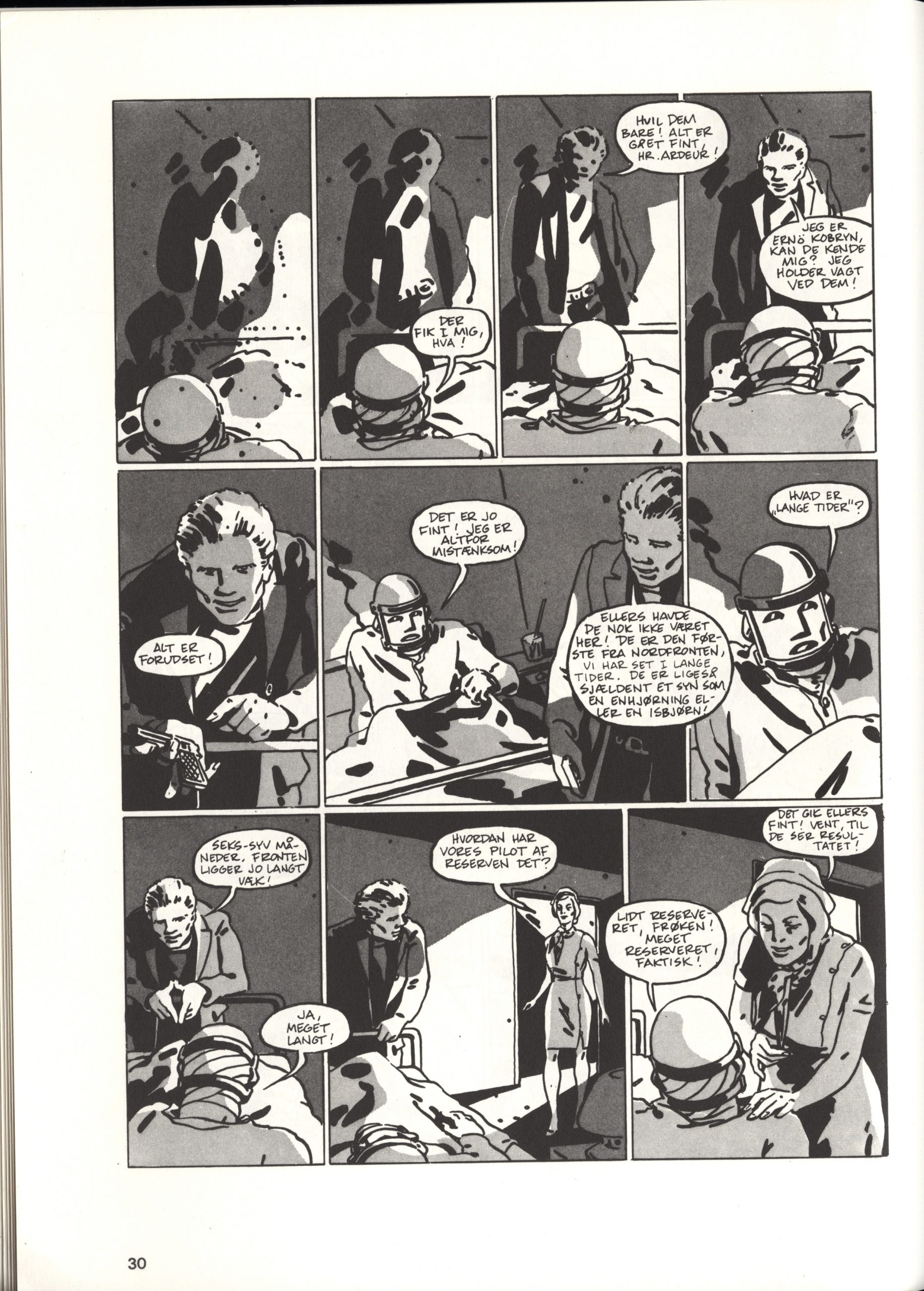 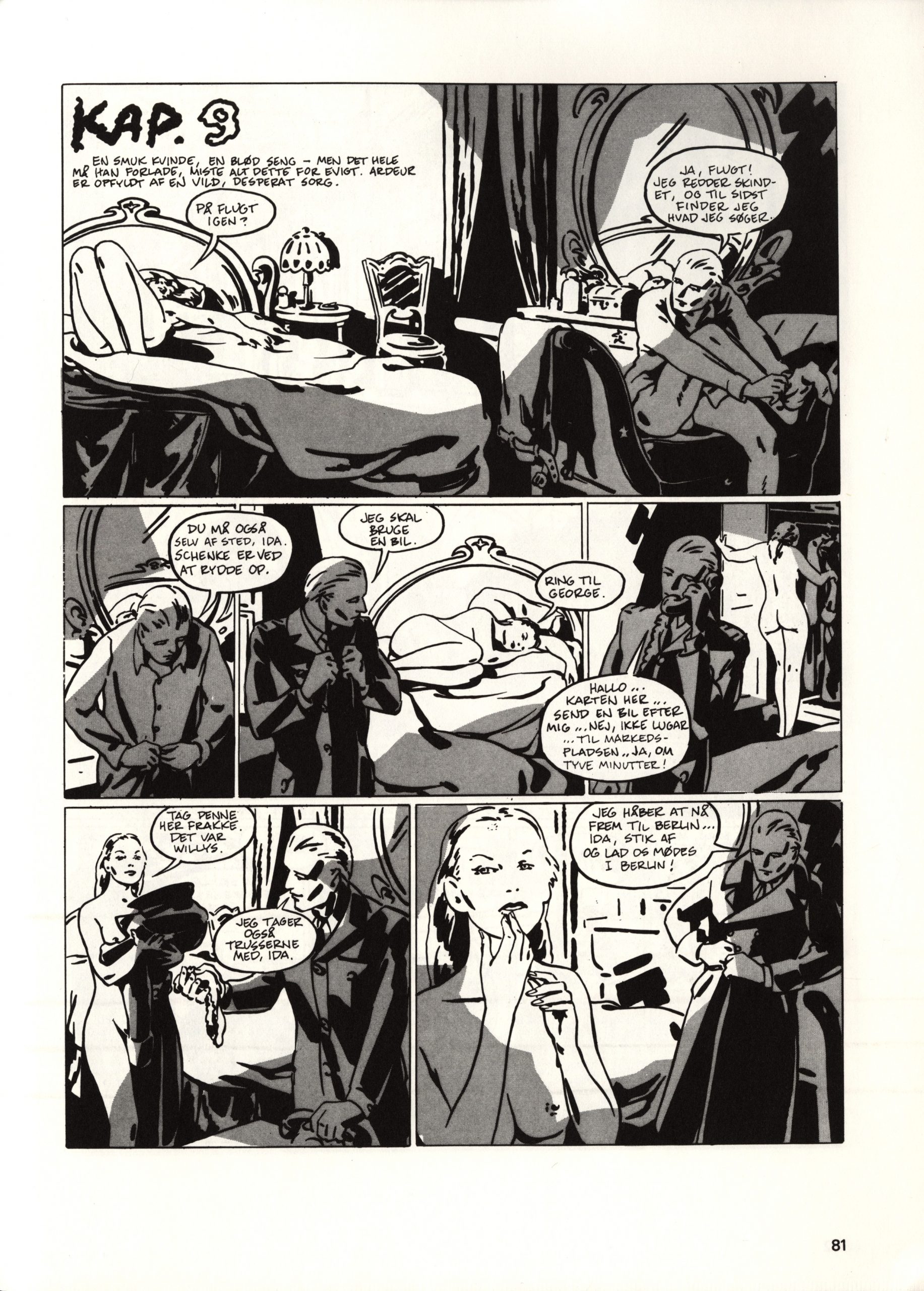 In 2014, a collected edition was published, allegedly with a final chapter to end the… storyline. (Ahem.) It hasn’t been translated, but I really hope it will.

So: Is it any good? Yes! The first 200 pages in particular. It’s tense and taut. Sure, it’s a post apocalyptic road movie, I mean comic book, but it’s an exciting one. The art work helps a lot, of course, in maintaining the vague sense of unsettling mystery, but it’s a compelling read.

And then, in the last 150 pages or so, it’s not so compelling any more. But it sure is pretty.

One thought on “BD80: Ardeur by Alex & Daniel Varenne”