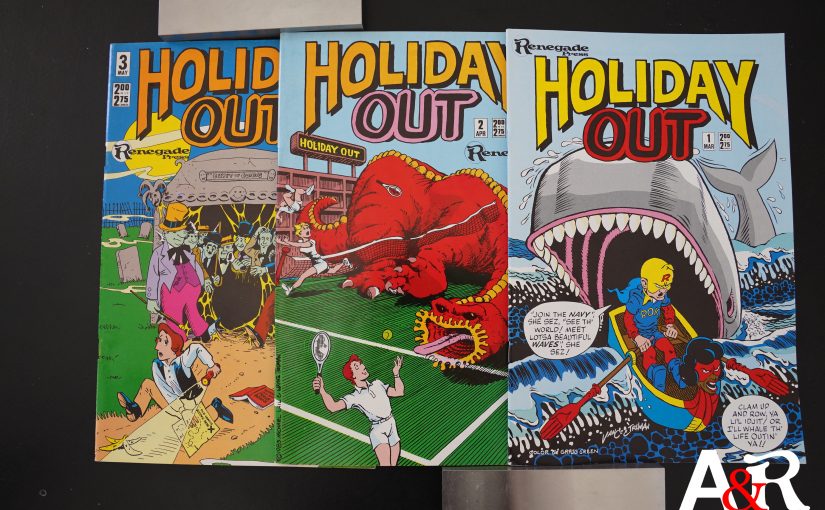 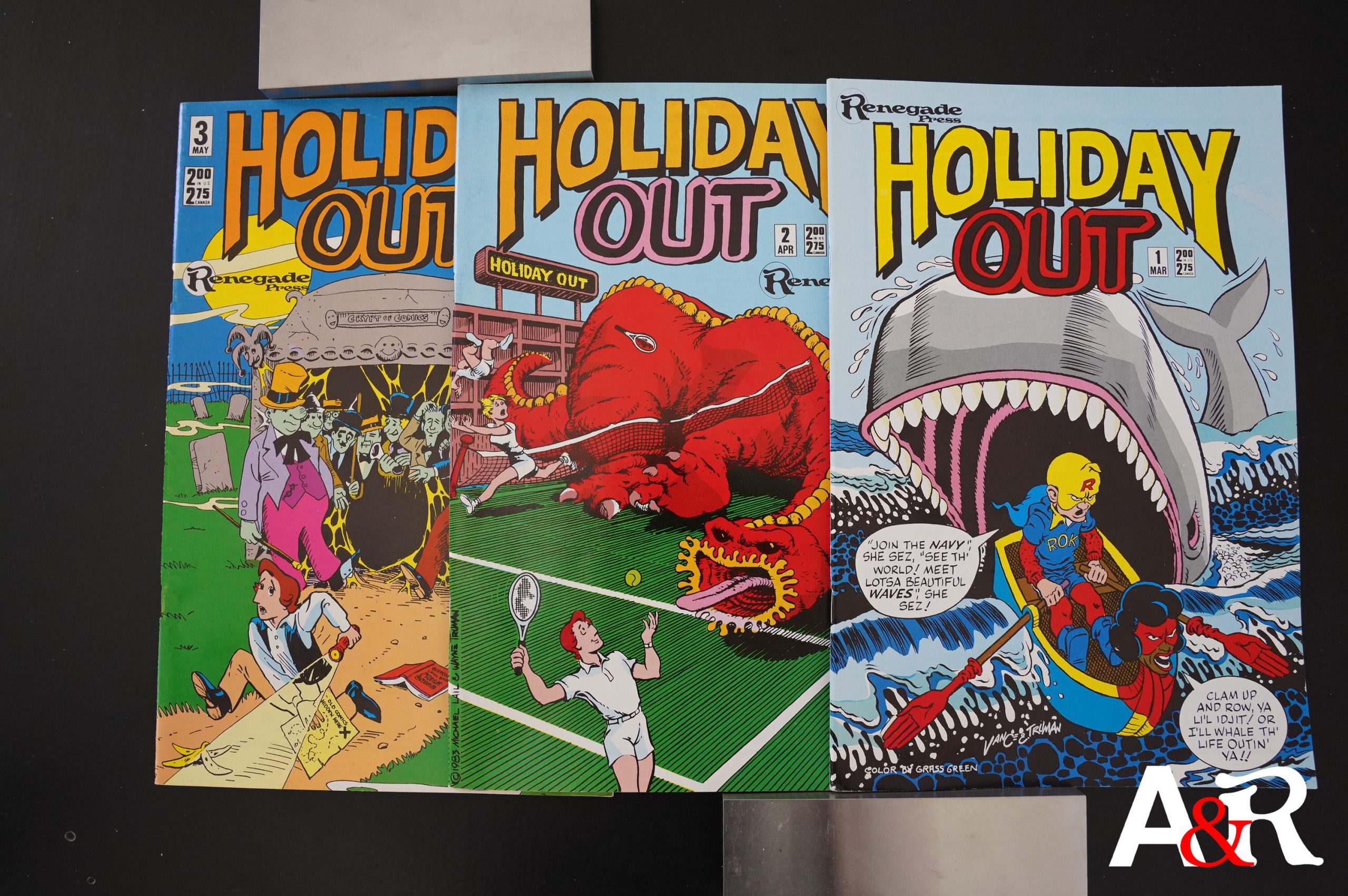 Content Warning: I’ve tried to keep this blog series polite, because 1) shouting at forty year old comics isn’t cute, and 2) I chose to read these comics of my own volition, and 3) there should probably be a 3). So, while I’ve written some snide stuff about some of these comics, I’ve edited it out.

But the sheer horridness of this comic is the only thing that’s even vaguely interesting, so if I’m to remove all that text, there won’t be anything left.

So. Let’s look at the first three pages: 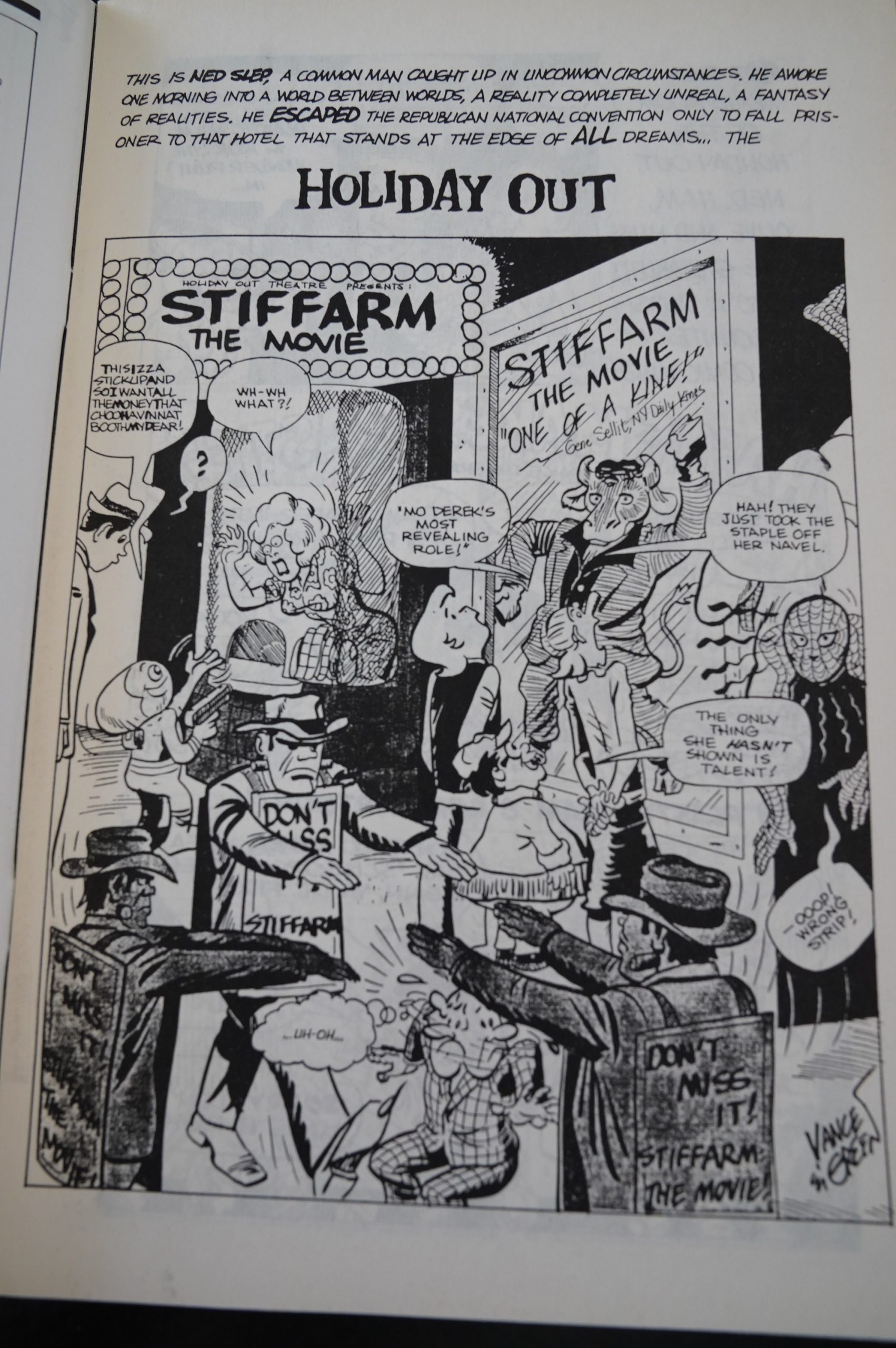 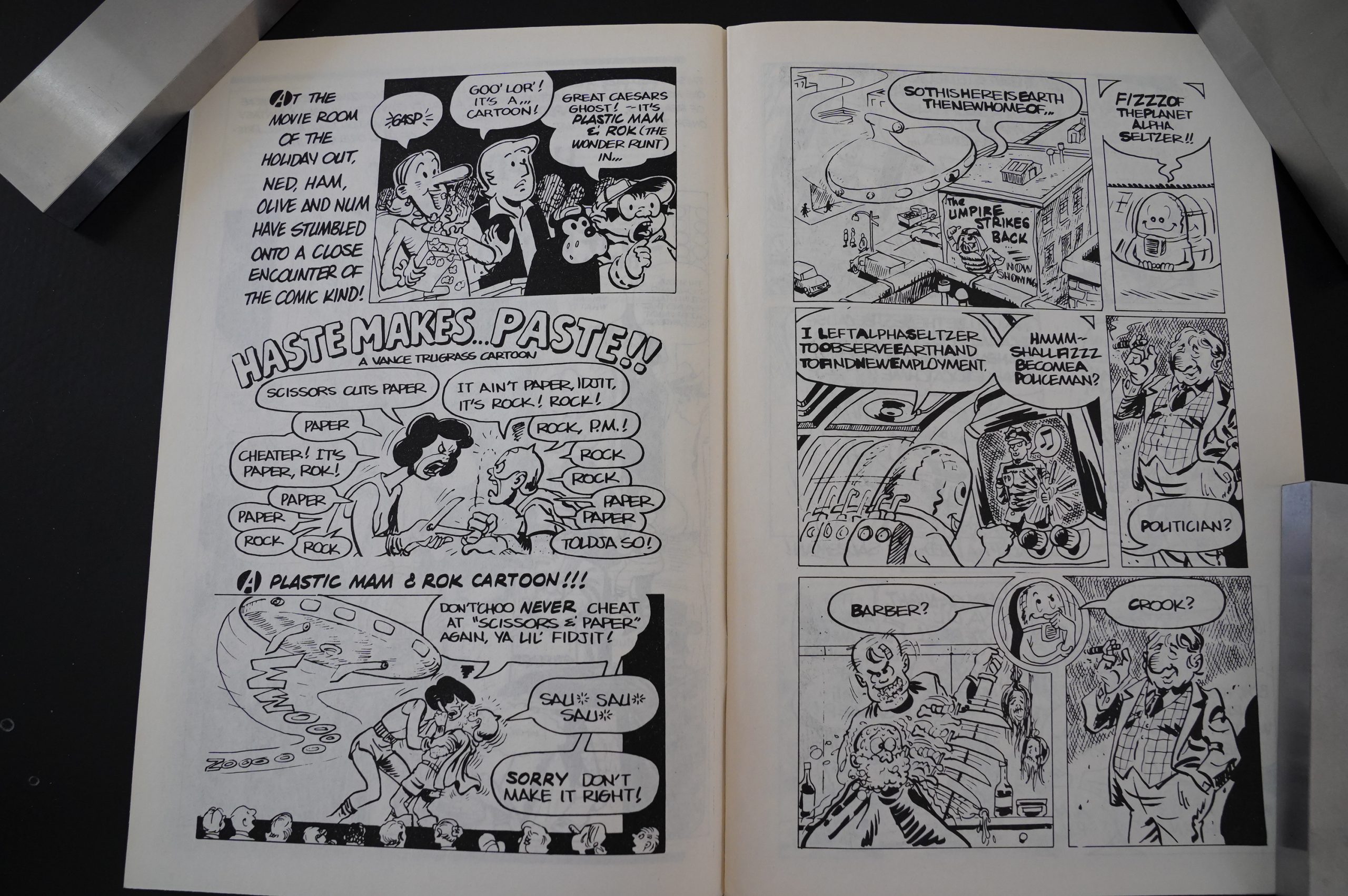 Well, OK, first of all: As is a common thing with Renegade comics, it’s somewhat unclear what the “credits” here actually are. Michael Vance is the writer (and copyright holder, according to the indicia), but few of the strips spell out who the writer is. The title here mentions “Trugrass”, and since Grass Green did the colours of the cover, and there’s an interview with Wayne Truman later in the issue, it’s probably those two?

It’s also unclear what this is, exactly — is this a reprint from Comics Buyers Guide? Holiday Out had apparently been running there. 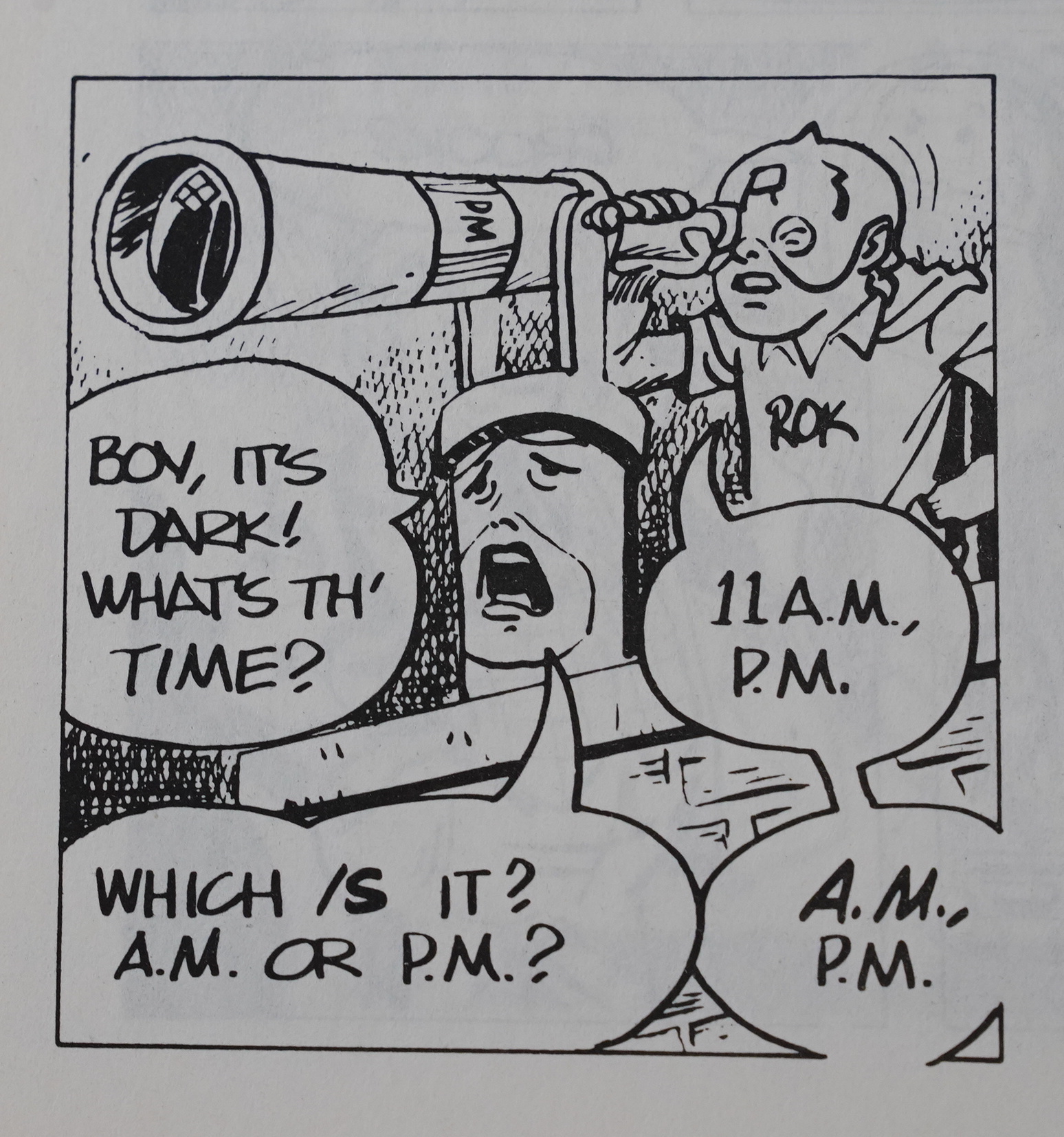 I guess the artwork is vaguely professional-looking, but the writing is so dire. This joke is dependant on the reader knowing that her name is “Plastic Mam” (ouch), and her sidekick is therefore calling her “P. M.”. Hilarity ensues? No? 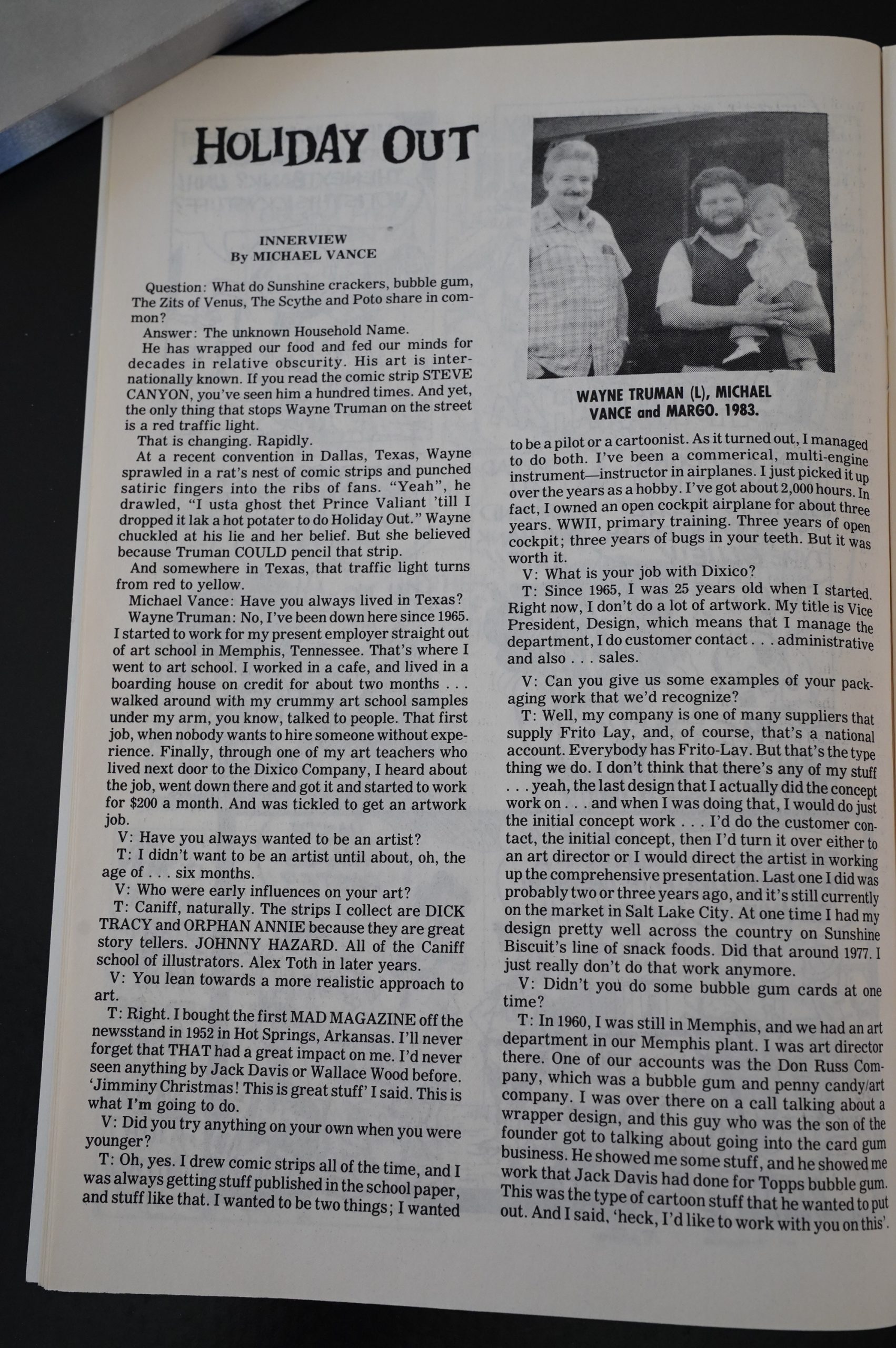 We get a long (six page?) interview with Truman for some reason. (Spoilers: There’s nothing of interest here.) 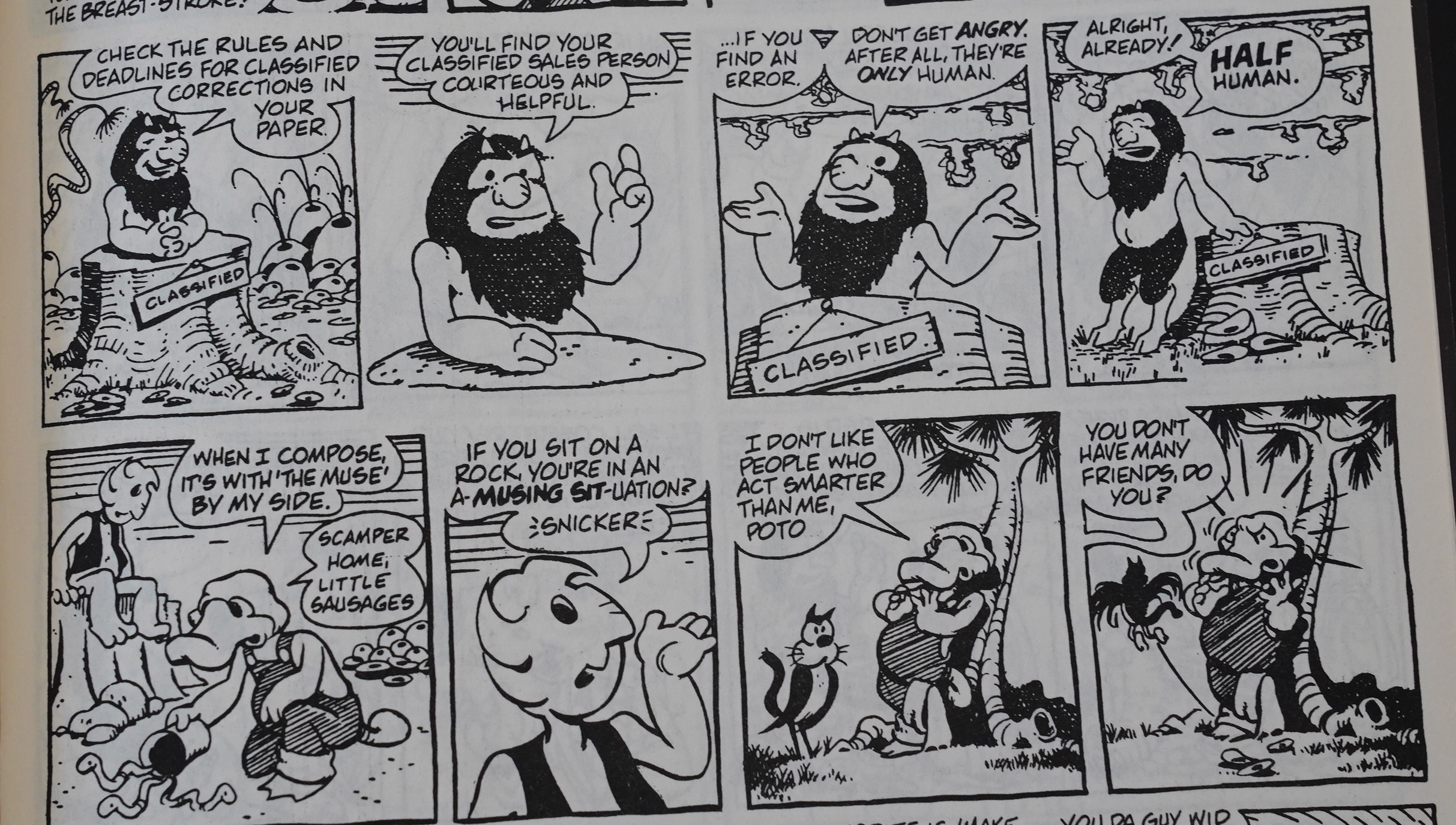 And then we get pages and pages of these strips that seem to be talking about the classifieds a lot… so were these designed to be sold to newspapers for them to run them on the classifieds pages?

There’s no credits whatsoever for these, and they’re so horribly unfunny that I had to stop reading them just for mental health reasons. 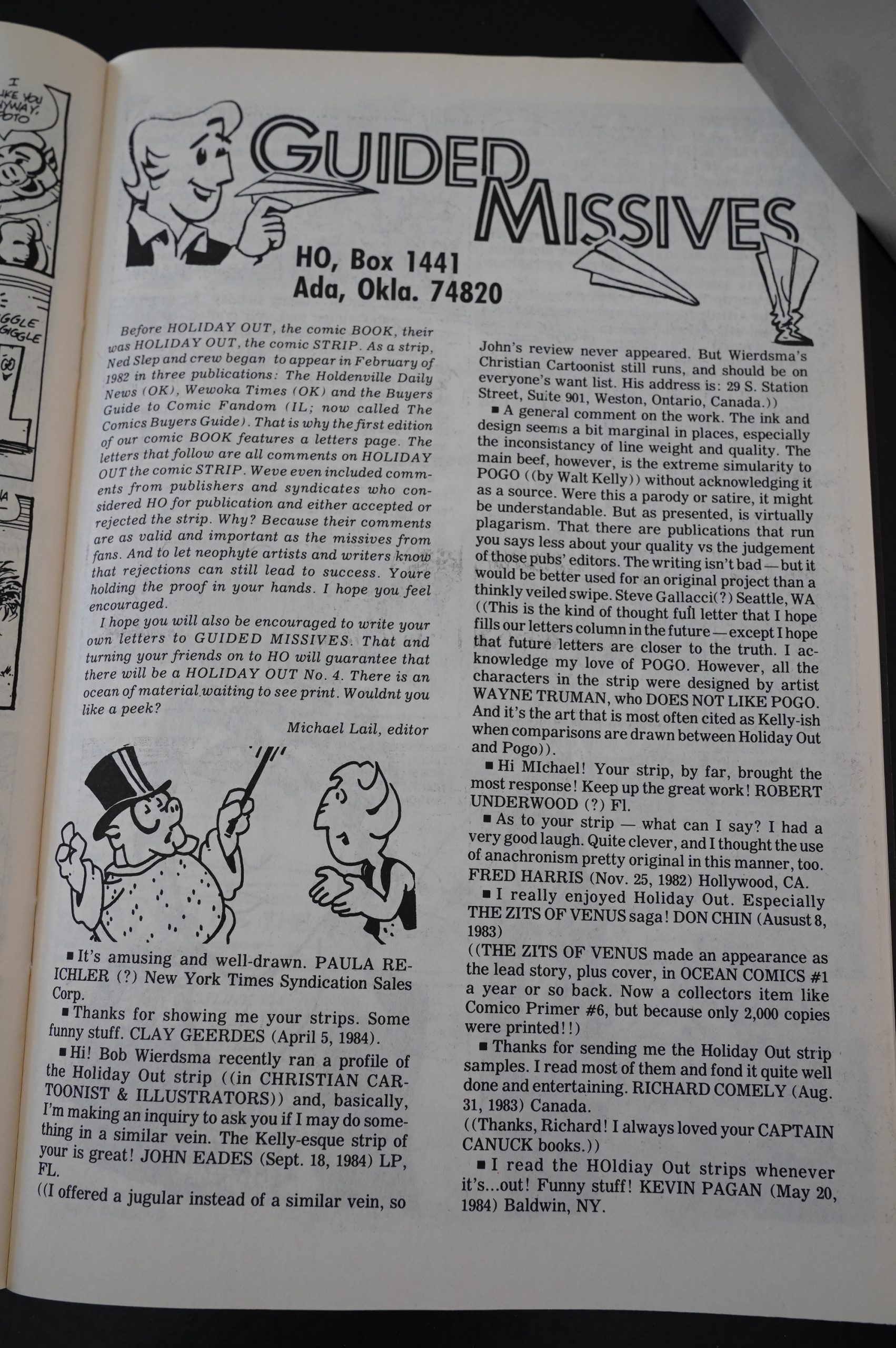 Since (some?) of these things are reprints, we get a letters page of sorts even in the first issue. 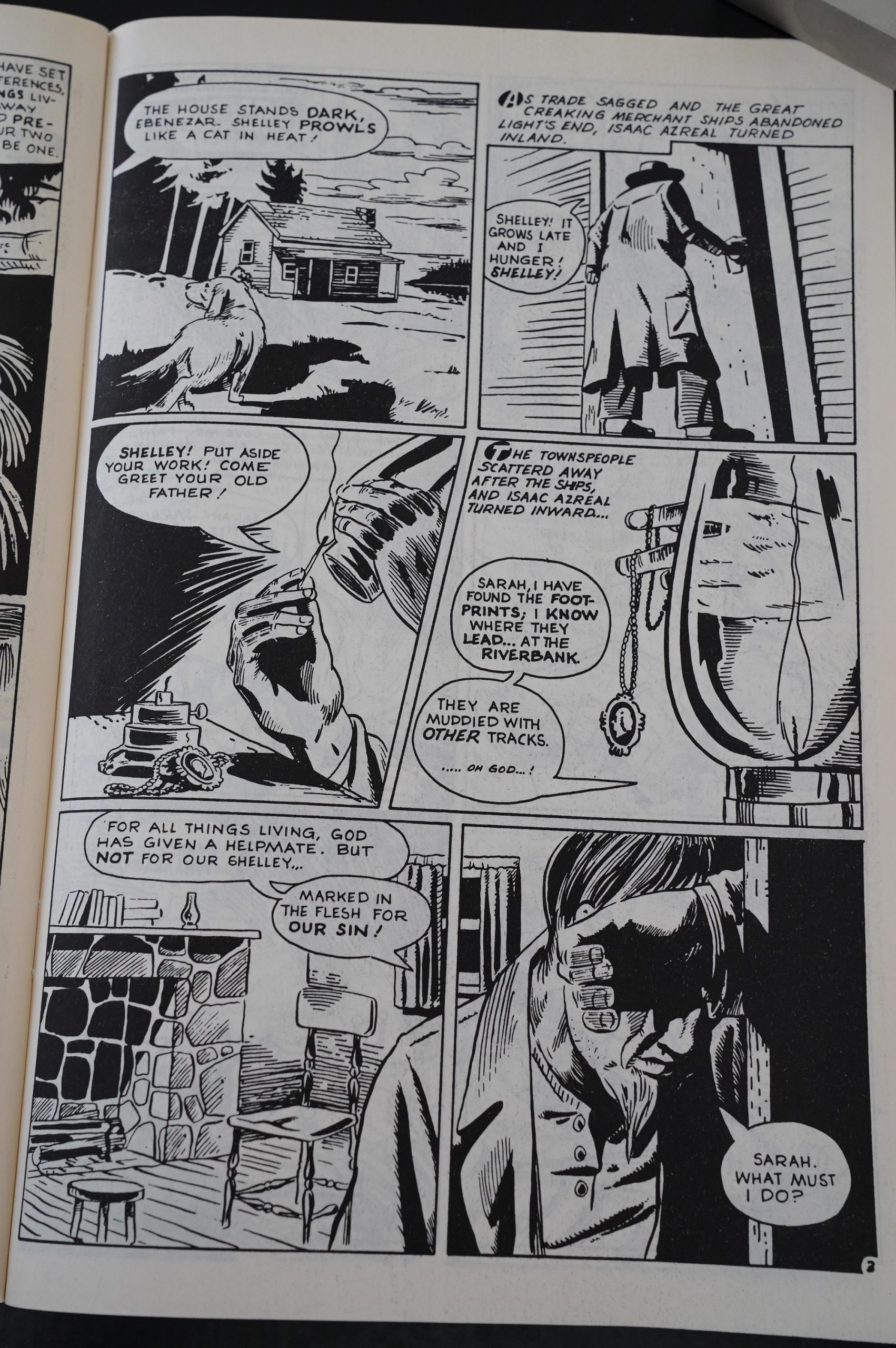 Then things go from horrible to awful: We get an O. Henry horror story that I didn’t realise wasn’t a parody of a horror story until I was a few pages in. “Shelley! It grows late and I hunger! Shelley!” That’s what I shout when I get home to my shack in the woods. 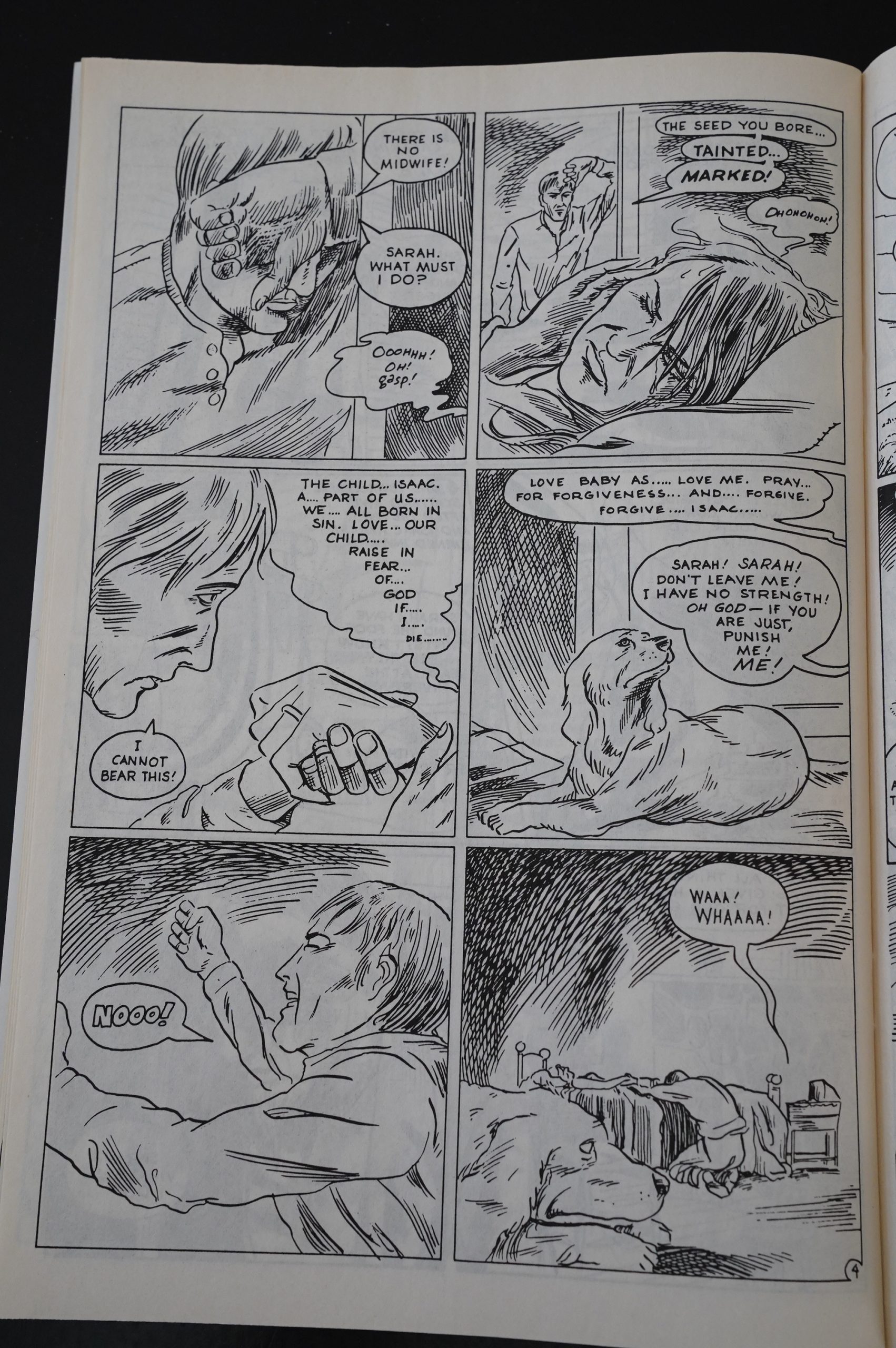 They forgot to ink one page? 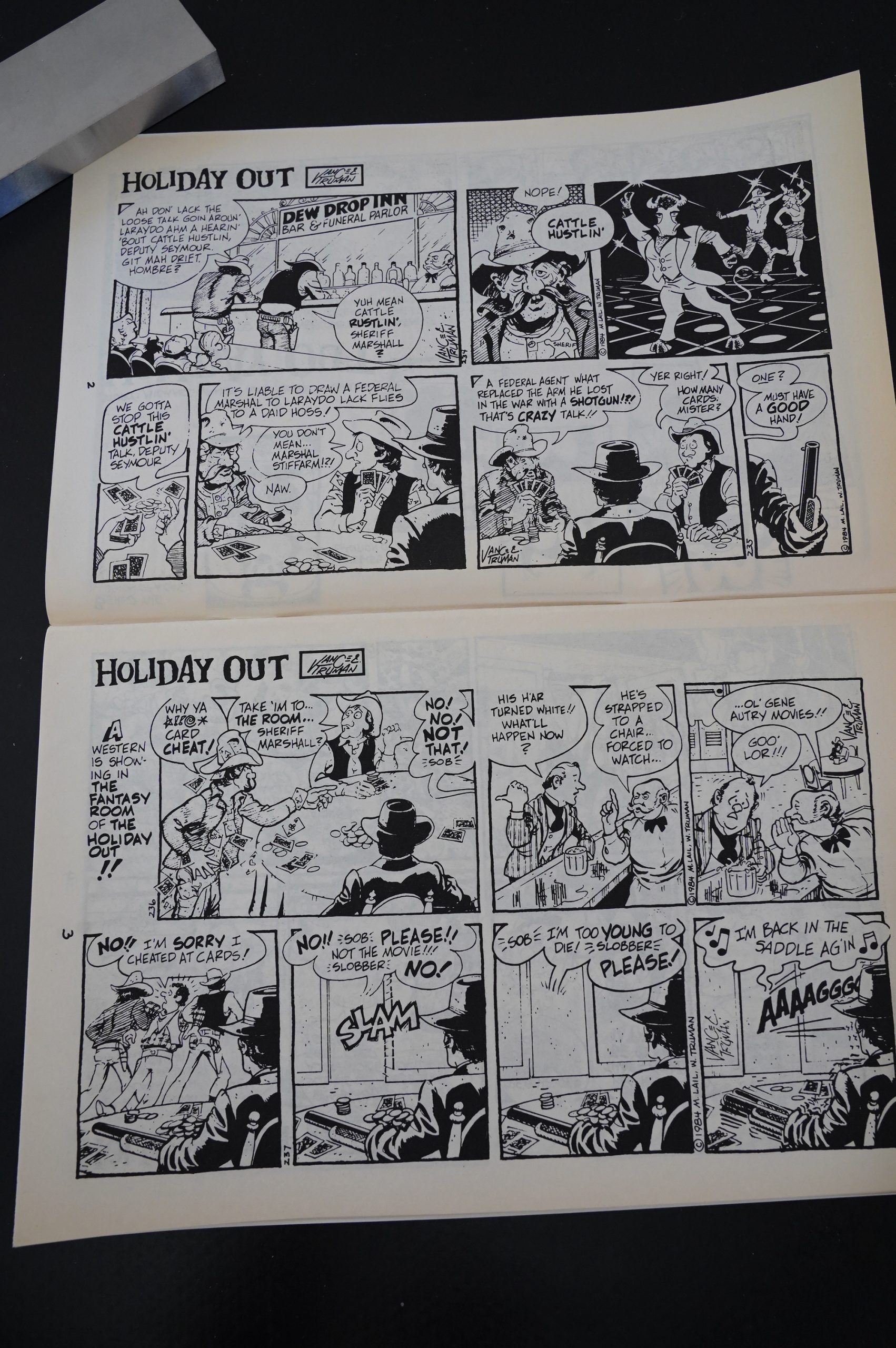 Much of the second issue is in this format… so these are probably reprints? You can see the very, very best gag above. I’m not trying to select the worst bits, I promise! 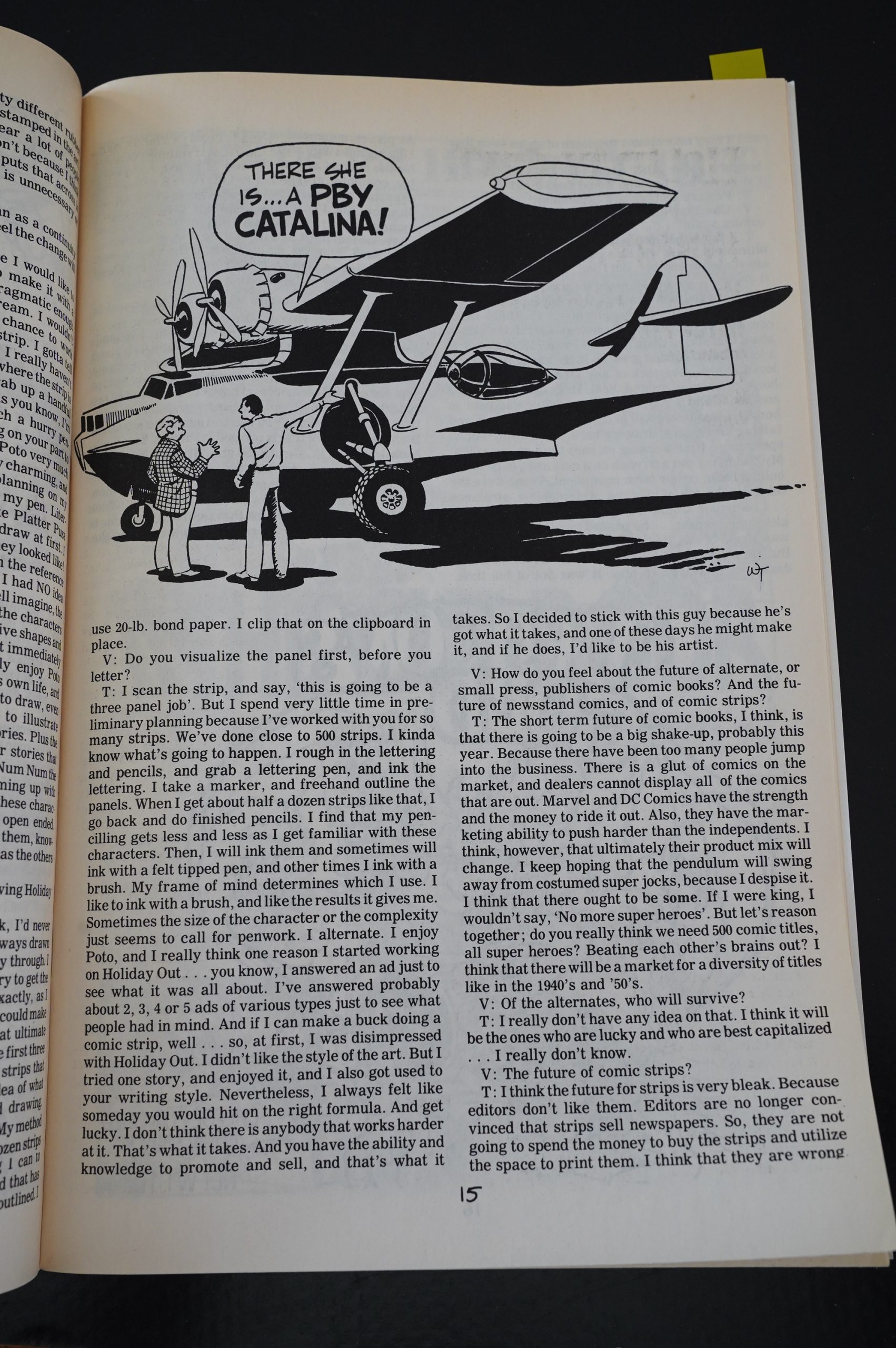 The interview with Truman continues, and this seems to say that he wasn’t the original artist on Holiday Out? “I also got used to your writing style.” He seems to be saying that he thinks that Vance is pure garbage, but perhaps he’ll strike it lucky anyway, so that’s why he’s sticking with Vance. But that’s just my interpretation; read it yourself. 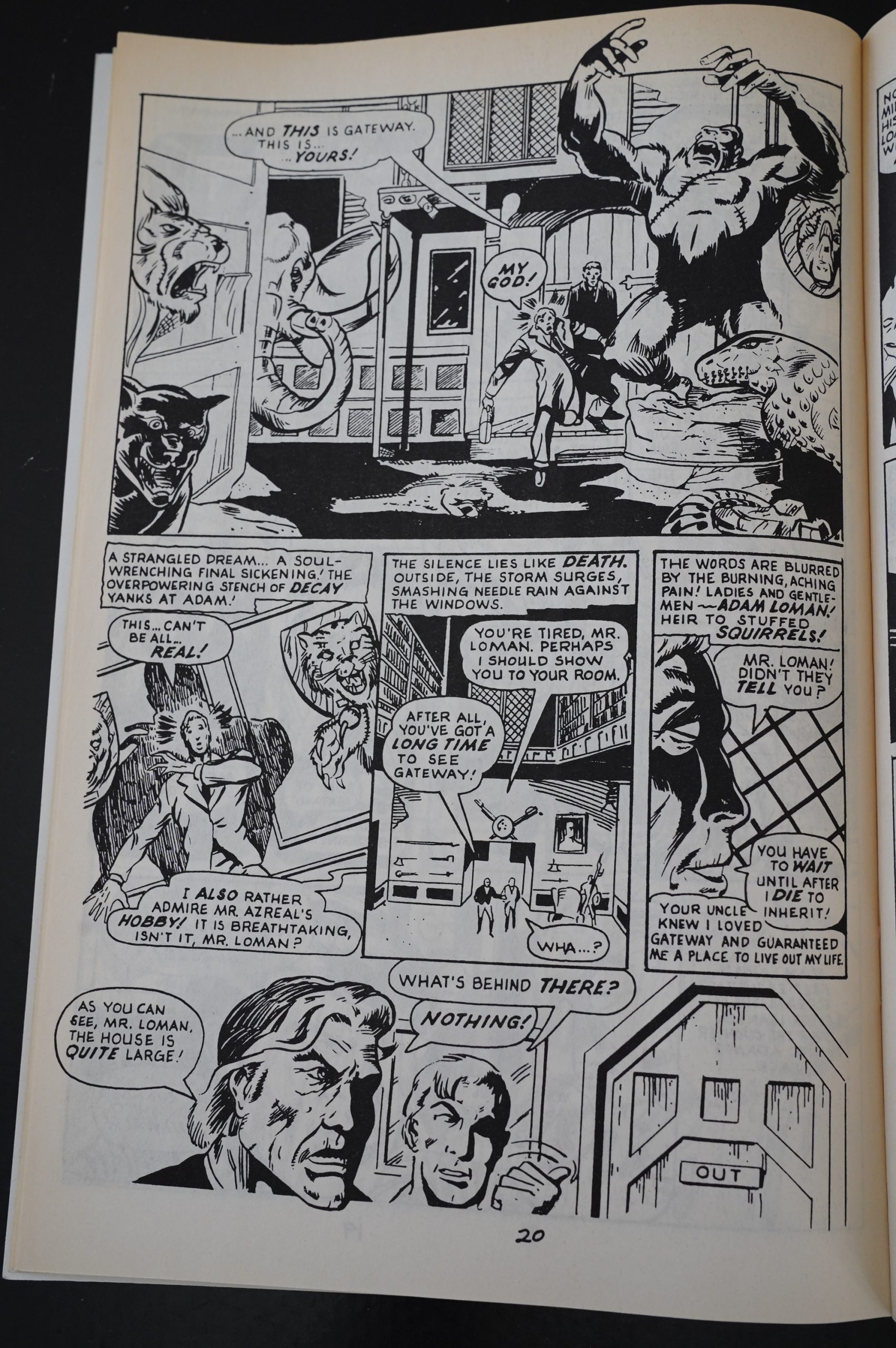 No, I don’t think this story is a parody, either, and I don’t know who the artist is. It’s totally Black and White Boom artwork — it’s amateurish and charmless. 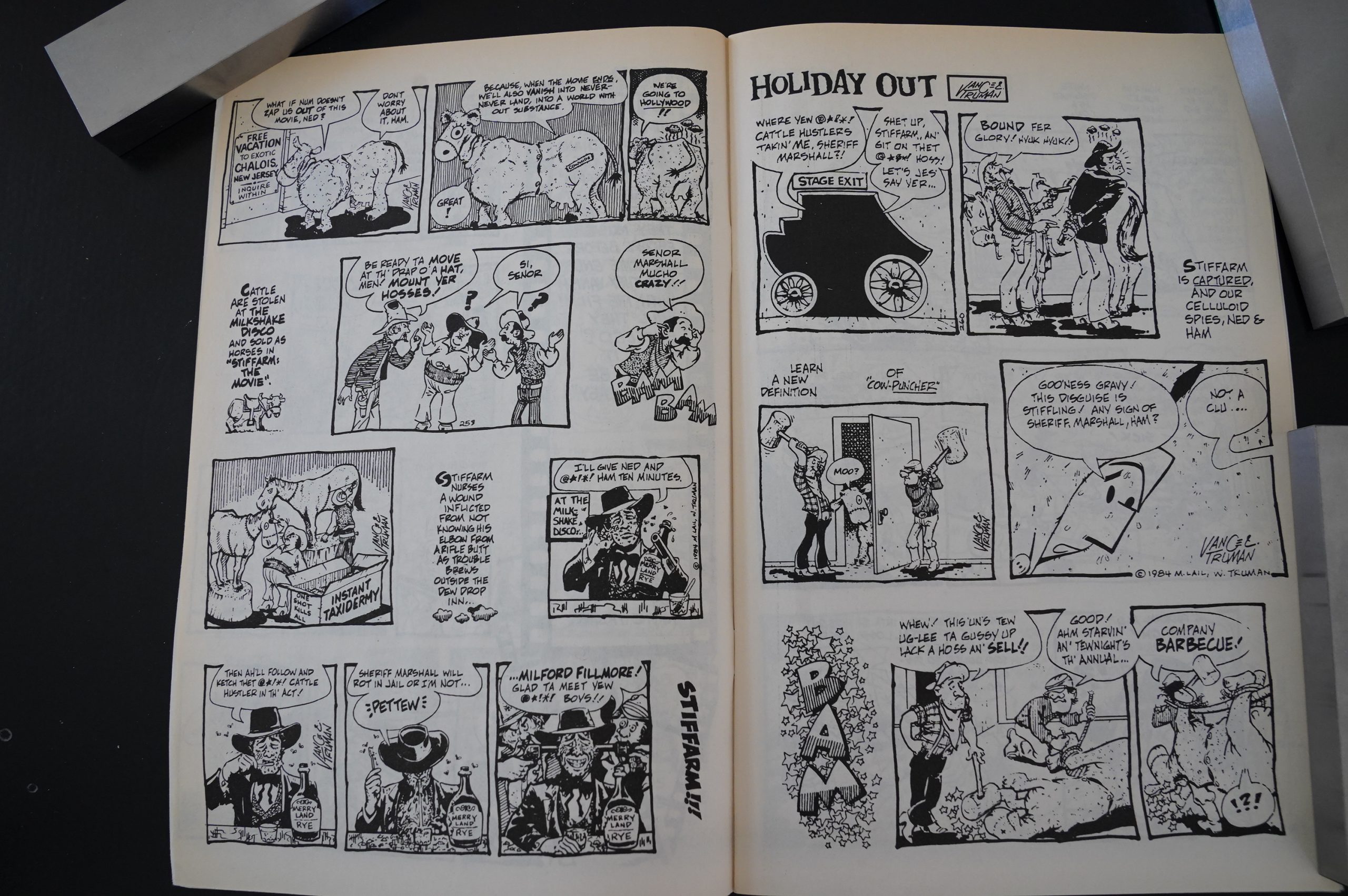 I think the serial from the second issue continued in the final issue, but it’s hard to tell, even if the third issue started with a repeat of a page from the first issue, and then a three page… recap? It’s so ineptly done that it’s hard to tell.

And I guess they got tired of the sideways strips, so instead they’re cutting them up and rearranging, leaving just one single sideways page. Joshua Quagmire says the writing sucks, and he’s right. But the most amazing thing here is that Michael Lail is the editor. I mean, that there is an editor. Somebody edited this!?!? How? Where? Where’s the editing! Just when you think things couldn’t get any worse… they don’t: It’s just as bad as the rest, though. “Julia Chives” and “Oarson Wells”.

Hey! I got through writing this without using any swear words. Fuck it, I’m suave.

Somebody who’d taken their book from Renegade (and published it somewhere else) said that 1988 was a hard year for publishing alternative comics… but also that being published under the Renegade banner was the kiss of death. And I didn’t quite understand why — sure, Renegade had published some quirky stuff, and some amateurish fanzine stuff (I’m looking at you, Scott Snyder’s Revolver), but it’s mostly books that you can see somebody wanting to publish.

This is pure manure.

Now, Renegade was undercapitalised and stuff, and keeping the boat afloat by publishing things is no sin. But publishing unreadable, ugly pap like this will erode people’s confidence in the brand, and I can totally see somebody who happened to buy this swearing to themselves “Never Renegade Again”.

But things could have been worse: Renegade may have published more Holiday Out:

Issue #4 will have a Richard “Grass”
Green front cover and a back cover by C
T. Green. “To Air is Human” is the title of
the story featuring Plastic Mam and Rok.
It is the story of a man who falls into a vat
of carbonation and winds up being able
to sell anything to anyone. This issue will
also reprint one of the original Holiday
Out stripe As you will recall, Holiday Out
is a locally-syndicated newspaper strip in
California (about 10-plus papers). The
strip that is to be reprintd is by C.T* Smith
and Duane Hanson and is titled “A Crack
in Space.” The story is a parody of New
Wave music and fantasy literature.
In the following issue (due out in
December) will have a Christmas theme
and a Wayne Truman story entitled
“Wholly Night,” Wayne will also do the
front cover. The second story wil be titled
“No Noose is Good Noose.” The back
cover will be by Duane Hanson. Several
of the characters from Holiday Out—in-
cluding Platter Pus and Plastic Mam—
become involved in, and must solve, a
robbery. There will also be a Plastic Mam
and Rok that will be almost an origin
story; this story will also involve the super-
villain Tapemam. Issues #4 and 5 will also
contain a two-part Forest Ackerman
interview. 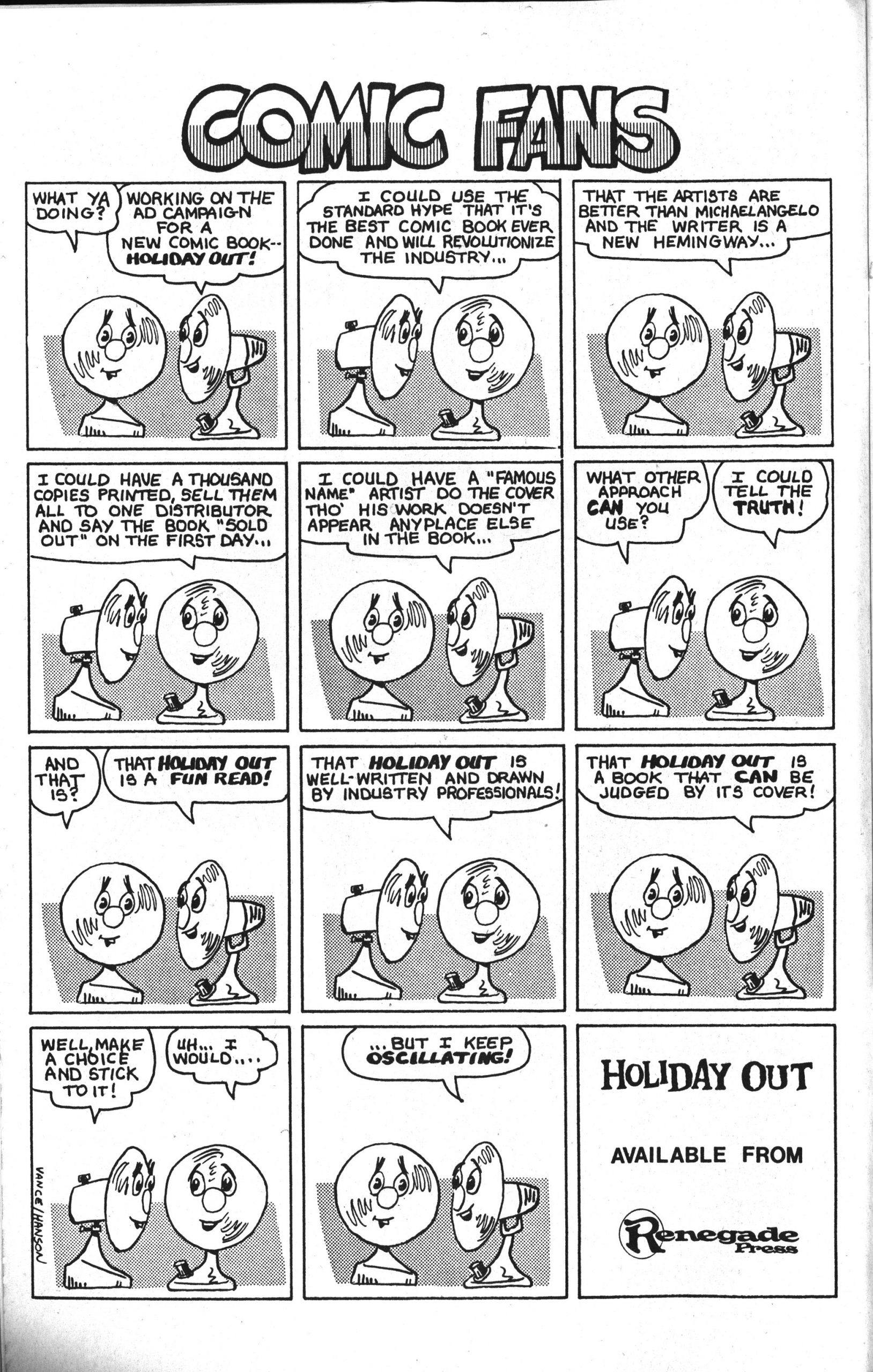 You will be shocked to hear that these comics have never been reprinted, but if you’re a masochist, you can probably pick them up very cheaply: 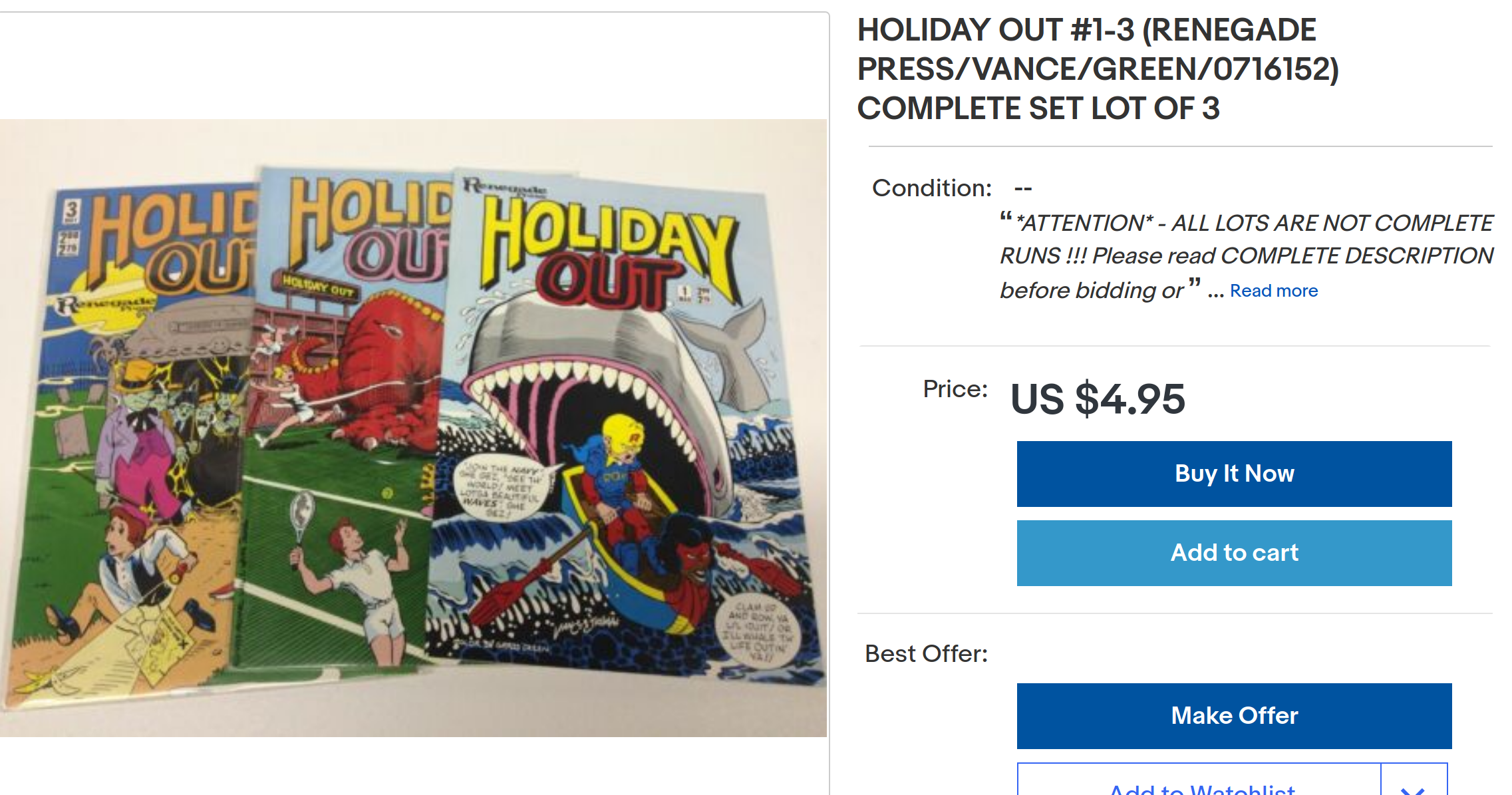 I was unable to find any reviews of Holiday Out.