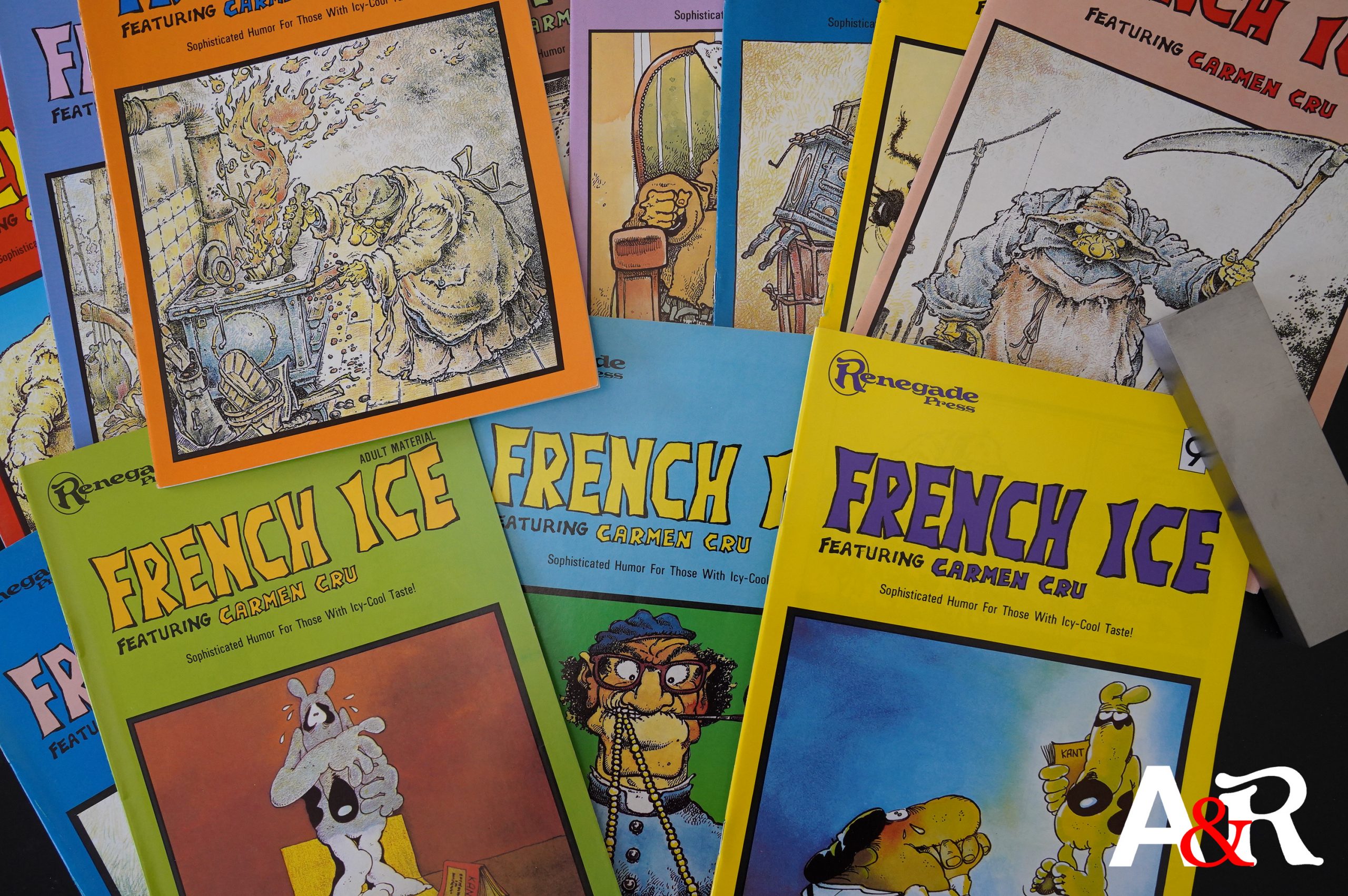 You can’t really say that the end is within reach for this blog series, but we are kinda starting to see Renegade winding down: This is the final series they published that reached double digits.

But we’re in February 1987, and the black and white boom hadn’t busted yet. I did have these comics as a teenager, I think, but I remember absolutely nothing about them. It’s an anthology translating stuff from Fluide Glacial? That’s all I’ve got. 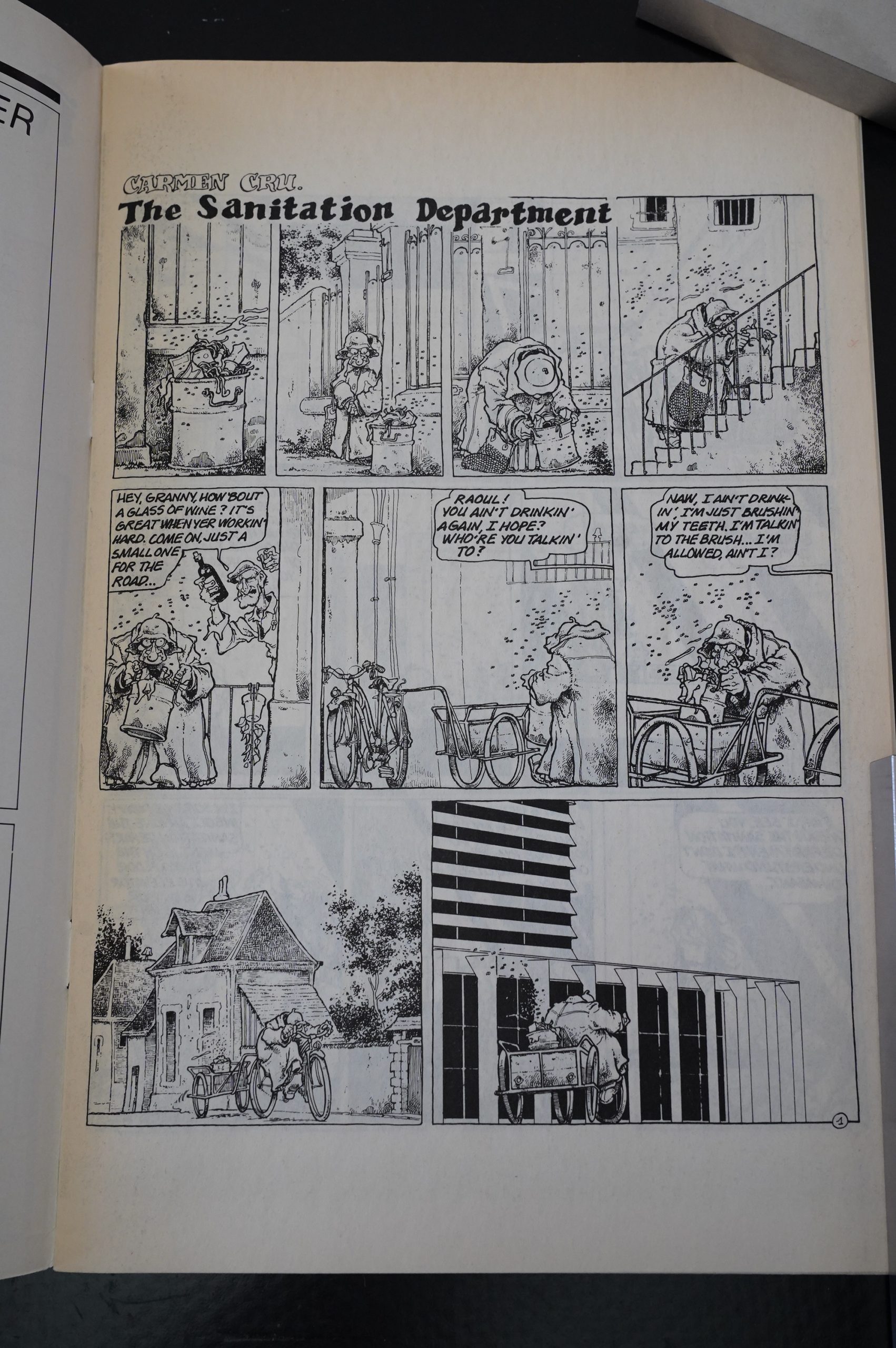 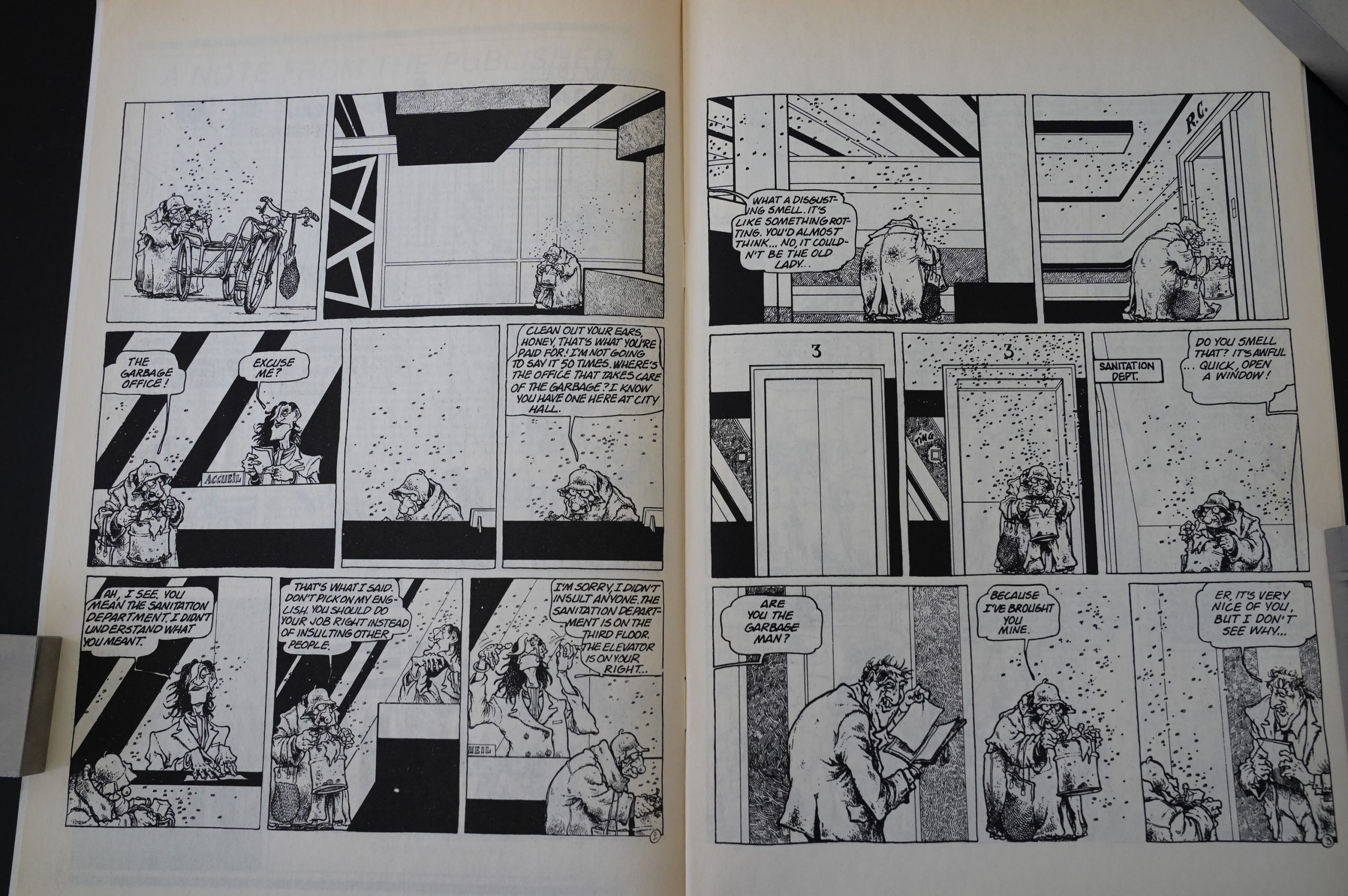 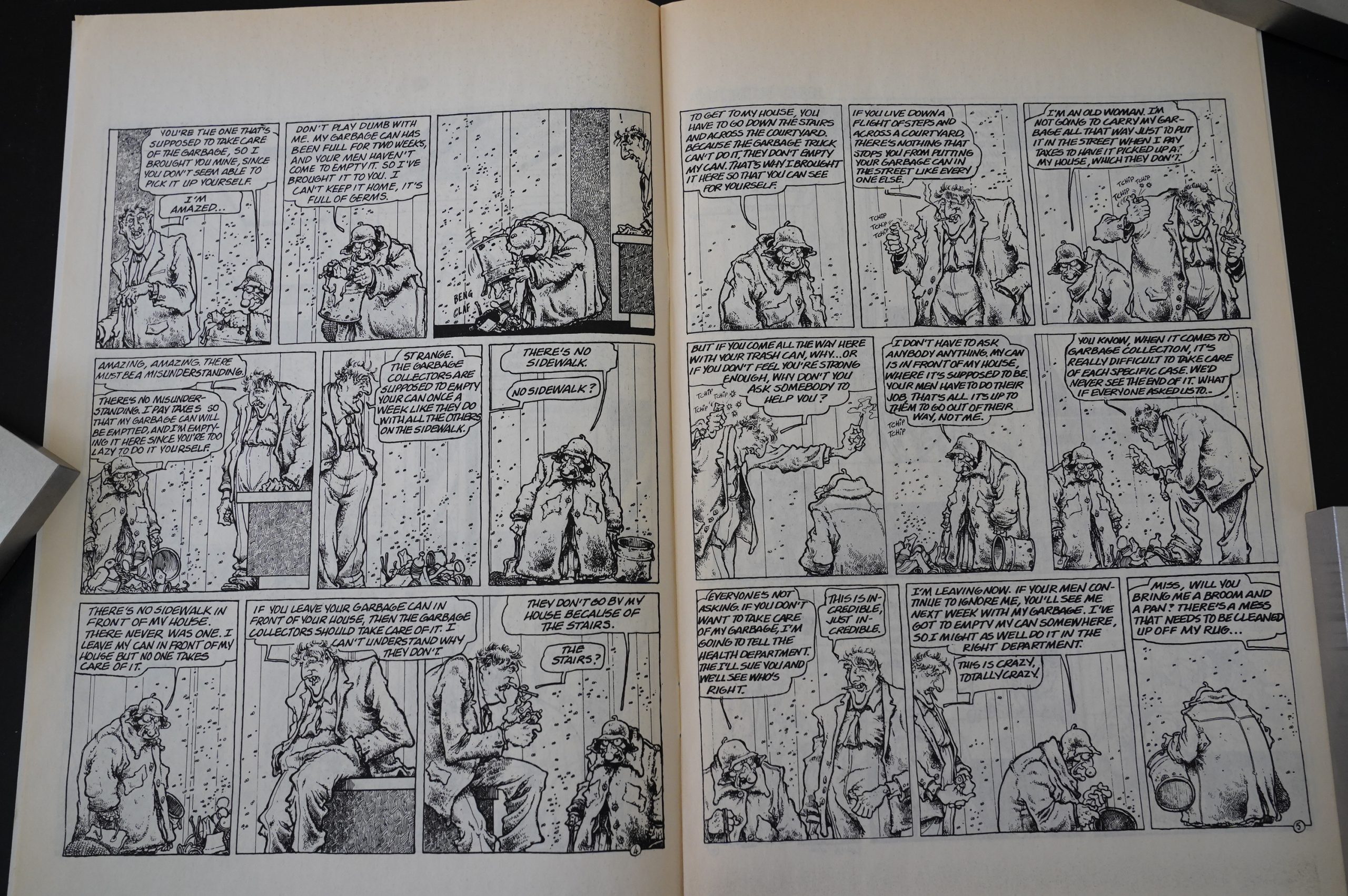 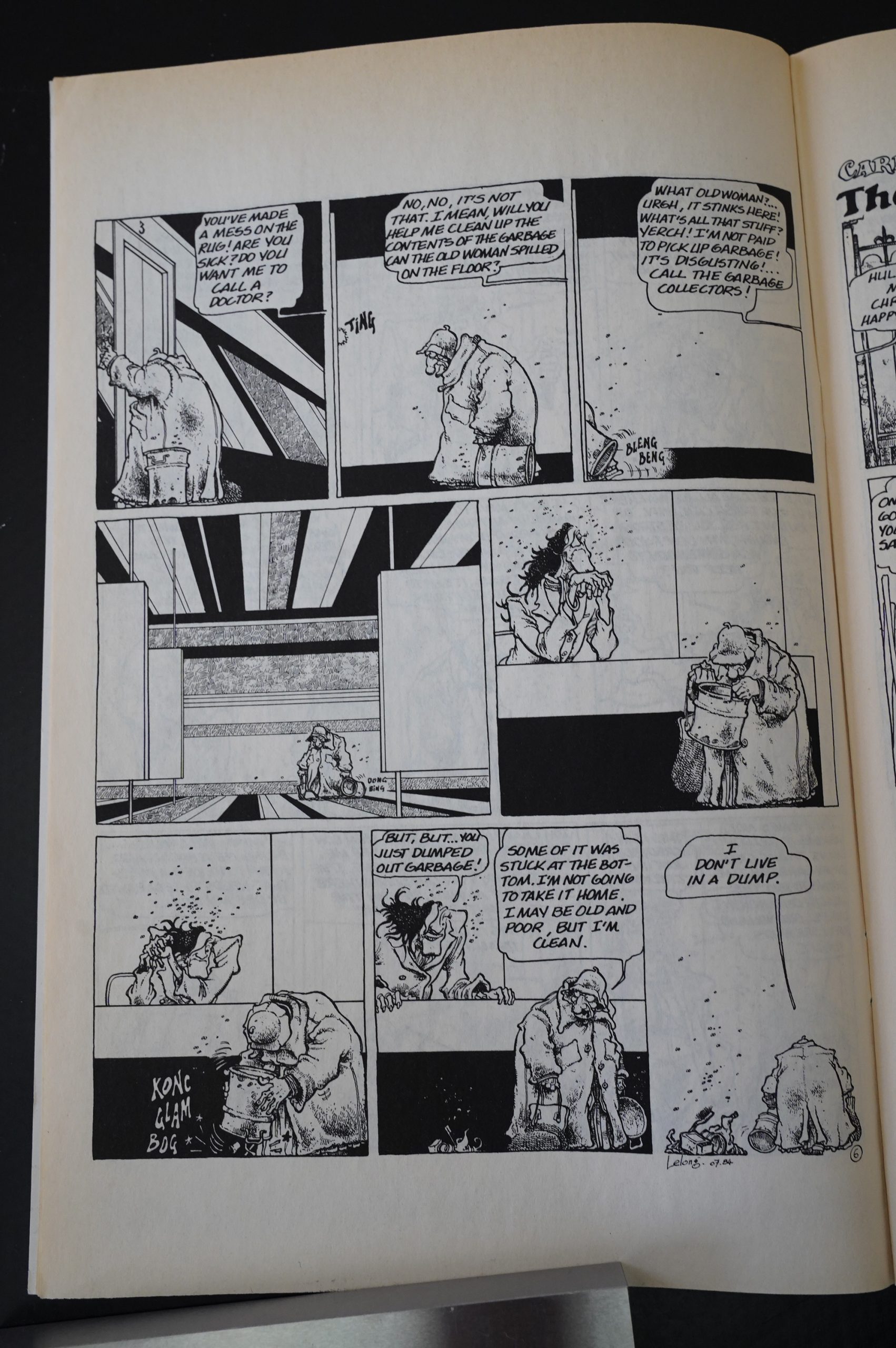 Yup; this is French, and no, French Ice isn’t really an anthology: The first six issues feature nothing but Carmen Cru, and that is indeed a series that ran in Fluide Glacial.

Now, I’m not a publishing genius or anything, but even during the black and white boom, bringing over a humour series about a nasty old woman, drawn in this hard-to-reproduce art style, printed on newsprint, doesn’t seem like the obvious get rich quick scheme. Humour comics are hard enough to get people to buy, but this is a tough sell.

But then again, it ran until Renegade was shut down, so it had to make some money. I’ve seen other inexplicably translated series being published here and there, and those have often turned out to exist because of export subsidies: That is, the Dept. of Culture in whatever country will sponsor translations and publications in other countries… but there’s no sign of that here, so I guess… Renegade just managed to get people to buy it somehow? 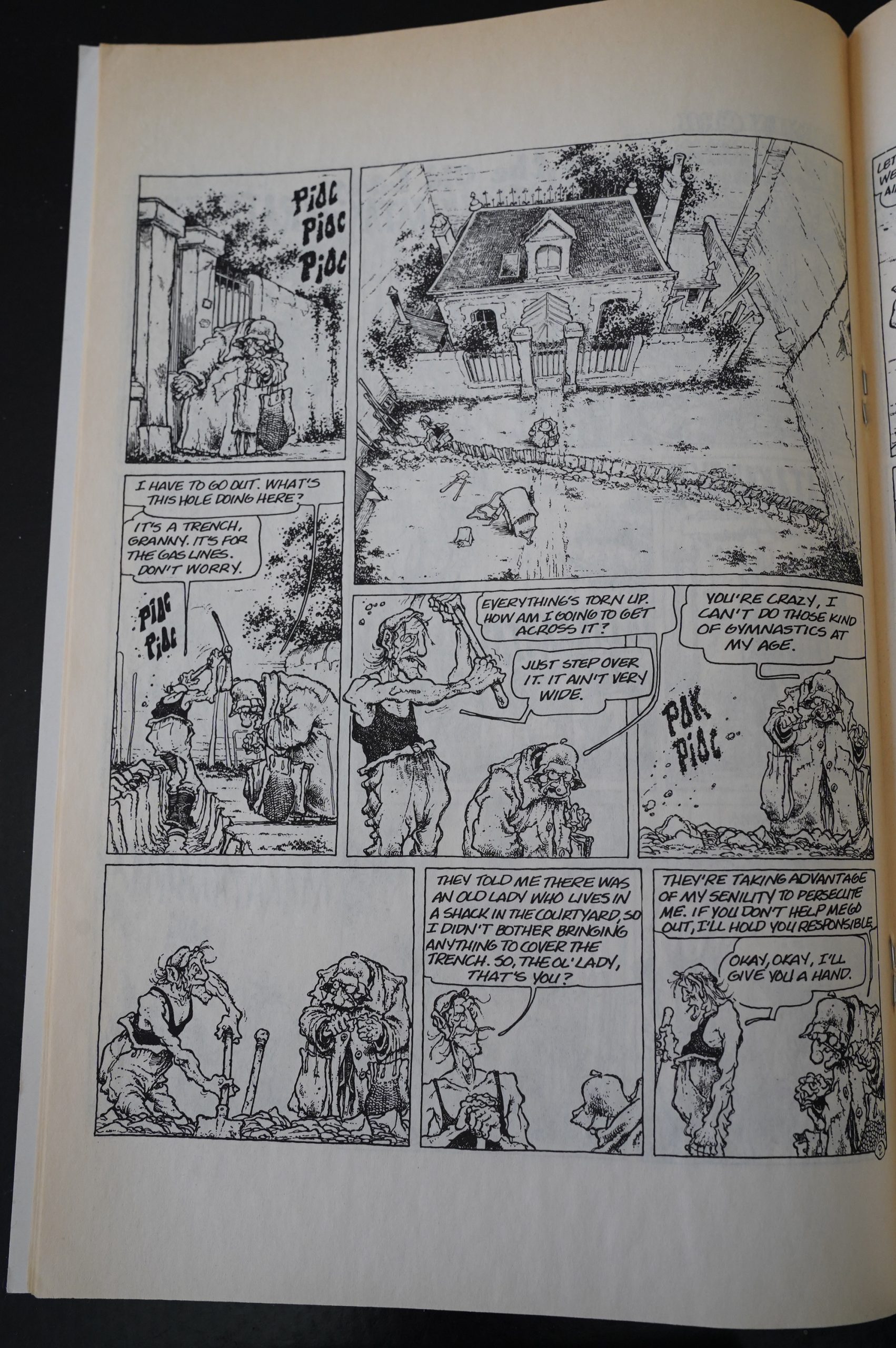 The Carmen Cru stories range in length from three to six pages, so you’d expect reading these would get kinda repetetive when done in a single sitting (as I’m doing today). The stories are also basically the same thing over and over again: Cru is a misanthropic woman with few positive characteristics, and she always comes out on top. I expected Lelong to pair her up with characters that are even worse than her, so that we can get on her side… but no — Cru is mostly taking advantage of people being nice to her, and hilarity ensues. The end.

As was common with Renegade, the artists name doesn’t appear anywhere in the comic — except for a single signature (seen above). I don’t think that’s by any kind of ill will, but Renegade seemed hands off to an extreme rarely seen at other comics companies: The creator (or translator/editor in this case, R J M Lofficier) deliver a package, and Renegade publishes it, and mistakes happen. 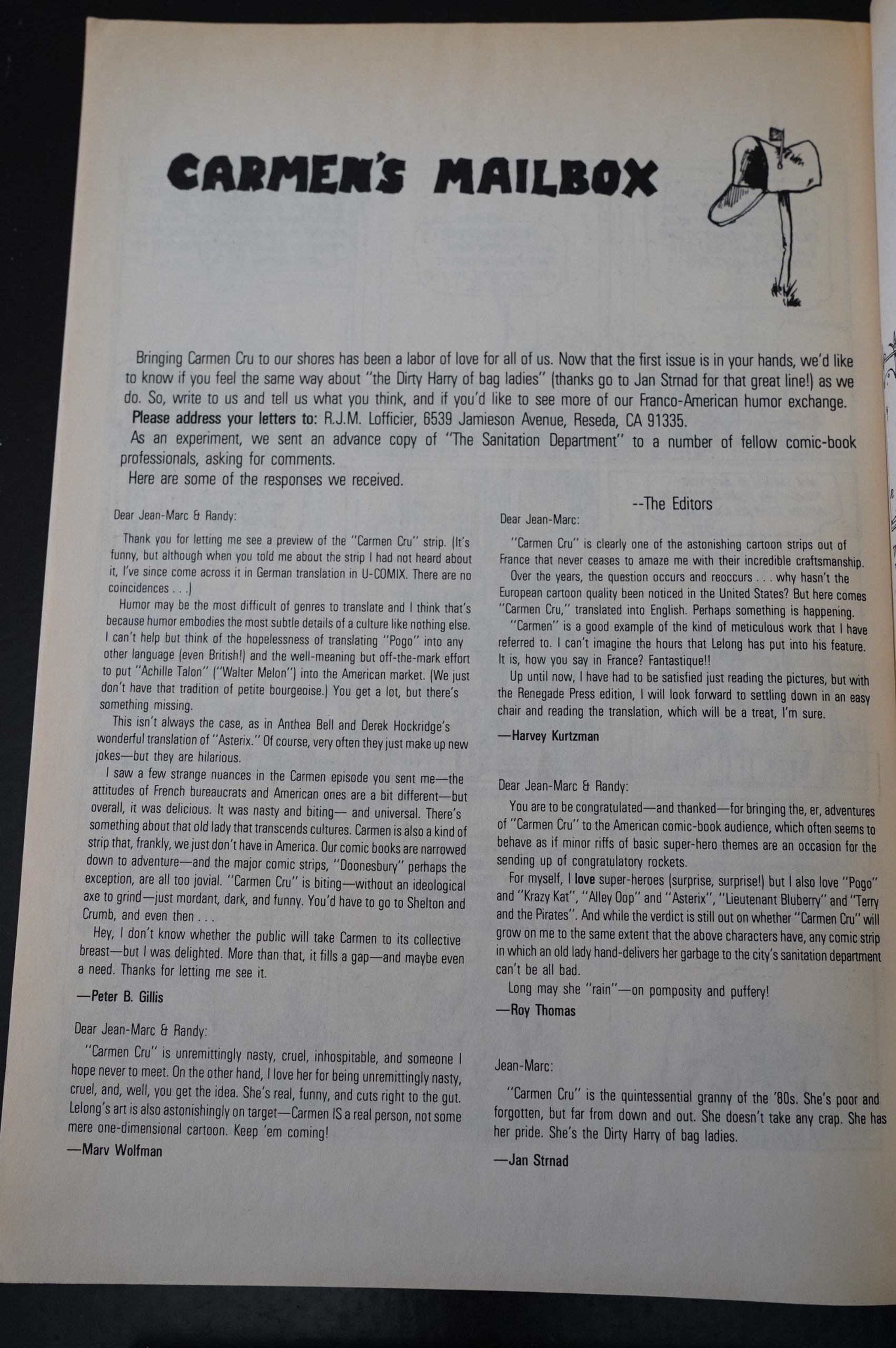 Lofficier sent out xeroxes to a bunch of comics people, so the letters pages have stuff on them from the very first issue. 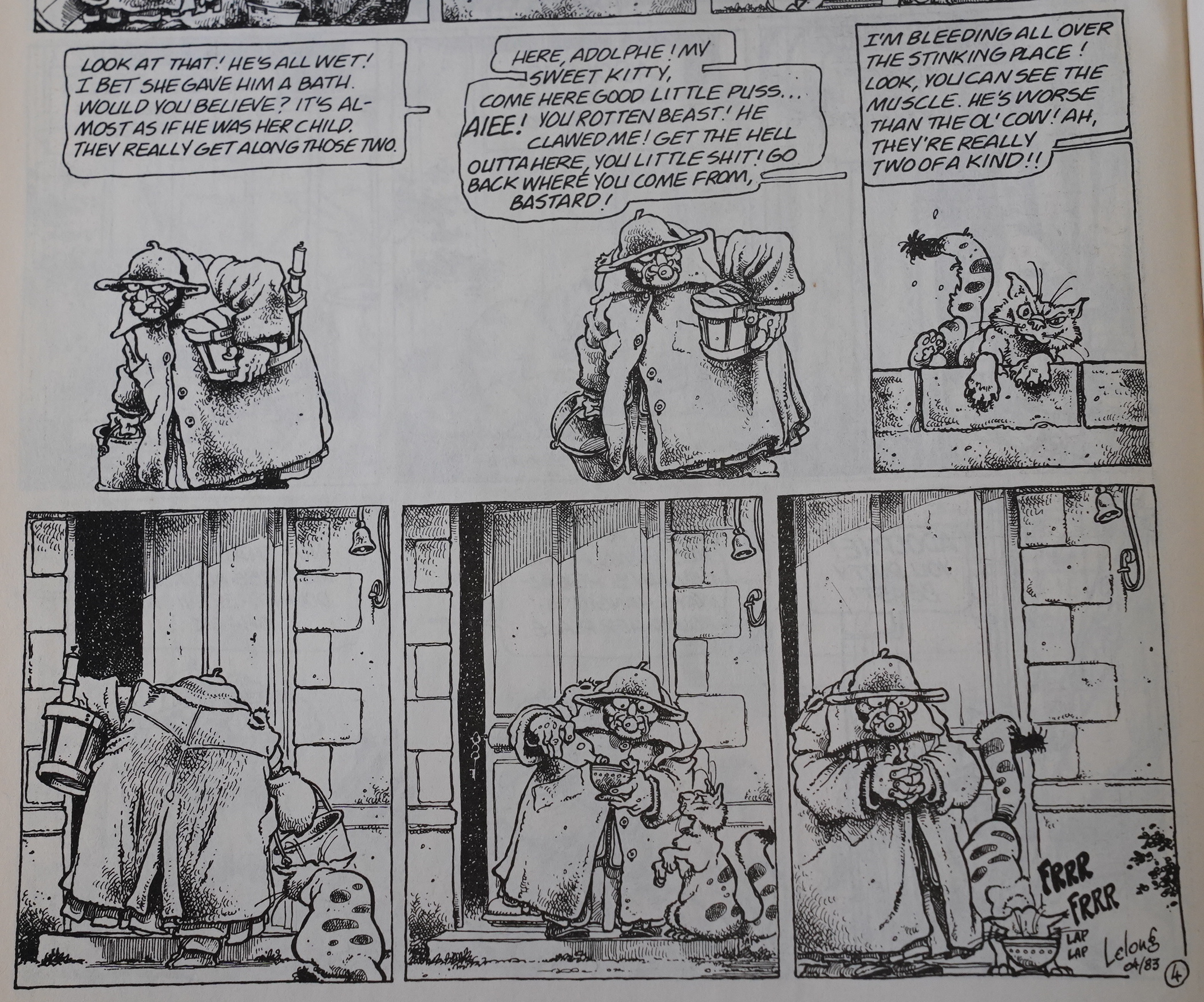 I had expected Carmen Cru to get more character development… That is, most comedy series that start out with a horrible protagonist feel like they have to make the protagonist more likeable. And that usually kills the humour. Lelong doesn’t really do that — except with Cru’s relationship to animals. Here she’s thrown some water over a cat that annoyed her, and that cat then went on to claw one of her annoying neighbours… which makes Cru become fond of the cat.

I guess that’s a softening of sorts, but… it’s still funny. 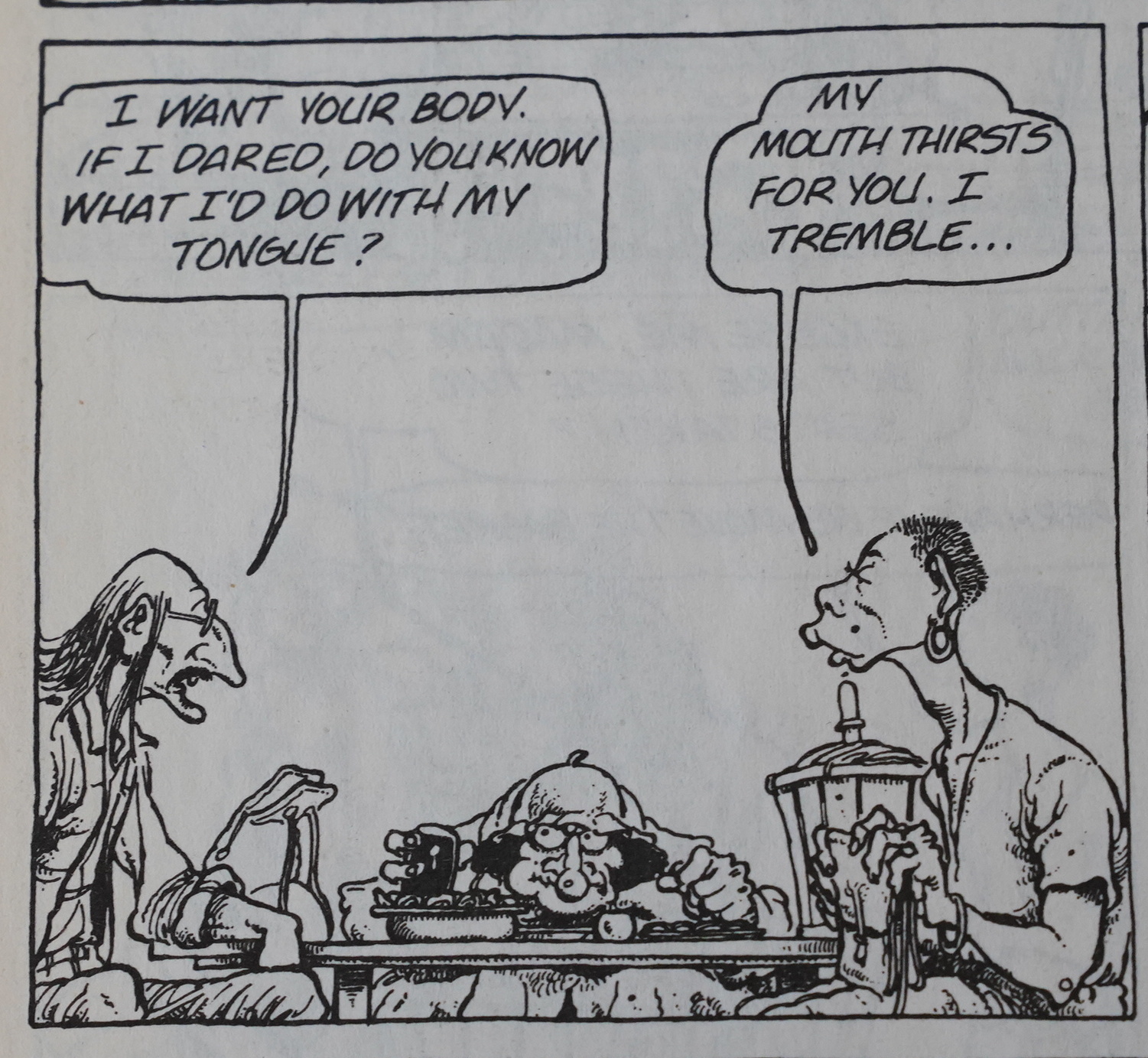 Lelong’s character design is absolutely absurd. Look at those three faces. Just look at them! 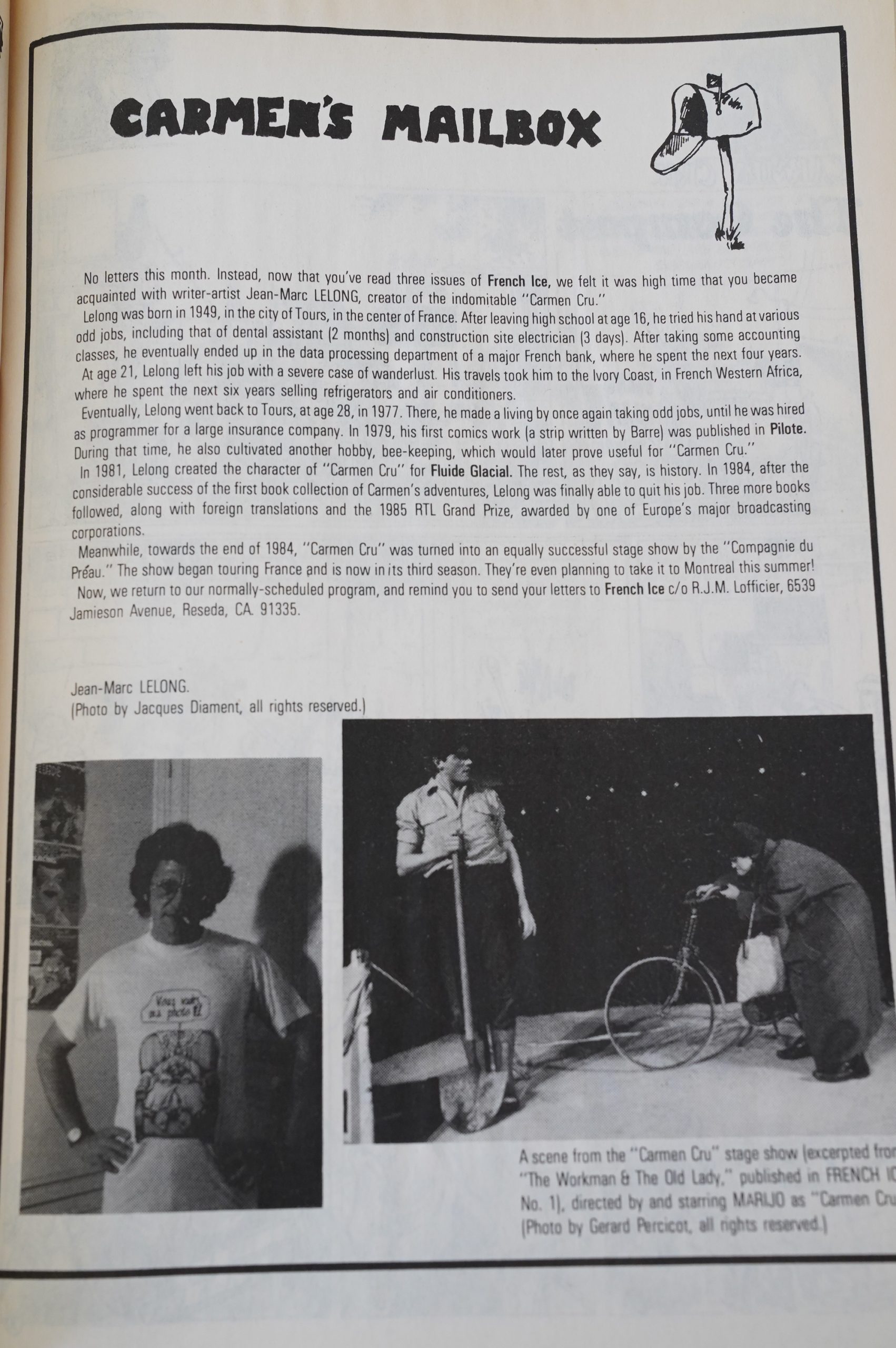 We get an introduction to Jean-Marc Lelong, and … apparently they’re doing a stage version of Carmen Cru!? This is Lelong’s favourite storytelling trick: He’ll have some monumental action going on outside the panels, but all we’re getting is the dialogue, and we never see anything other than Carmen Cru walking away (from the disaster she’s created). Is this because Lelong didn’t want to go to the trouble of drawing the colliding trains? Probably! But it also works as a gag.

Also note that they’ve started filling the extra space at the top of the page with some cartoons. (Carmen Cru was originally drawn for “album” dimensions, which is wider and not as tall.)

Heh. Walter Simonson notes the oddness of not actually saying who the creator was in the first couple issues. 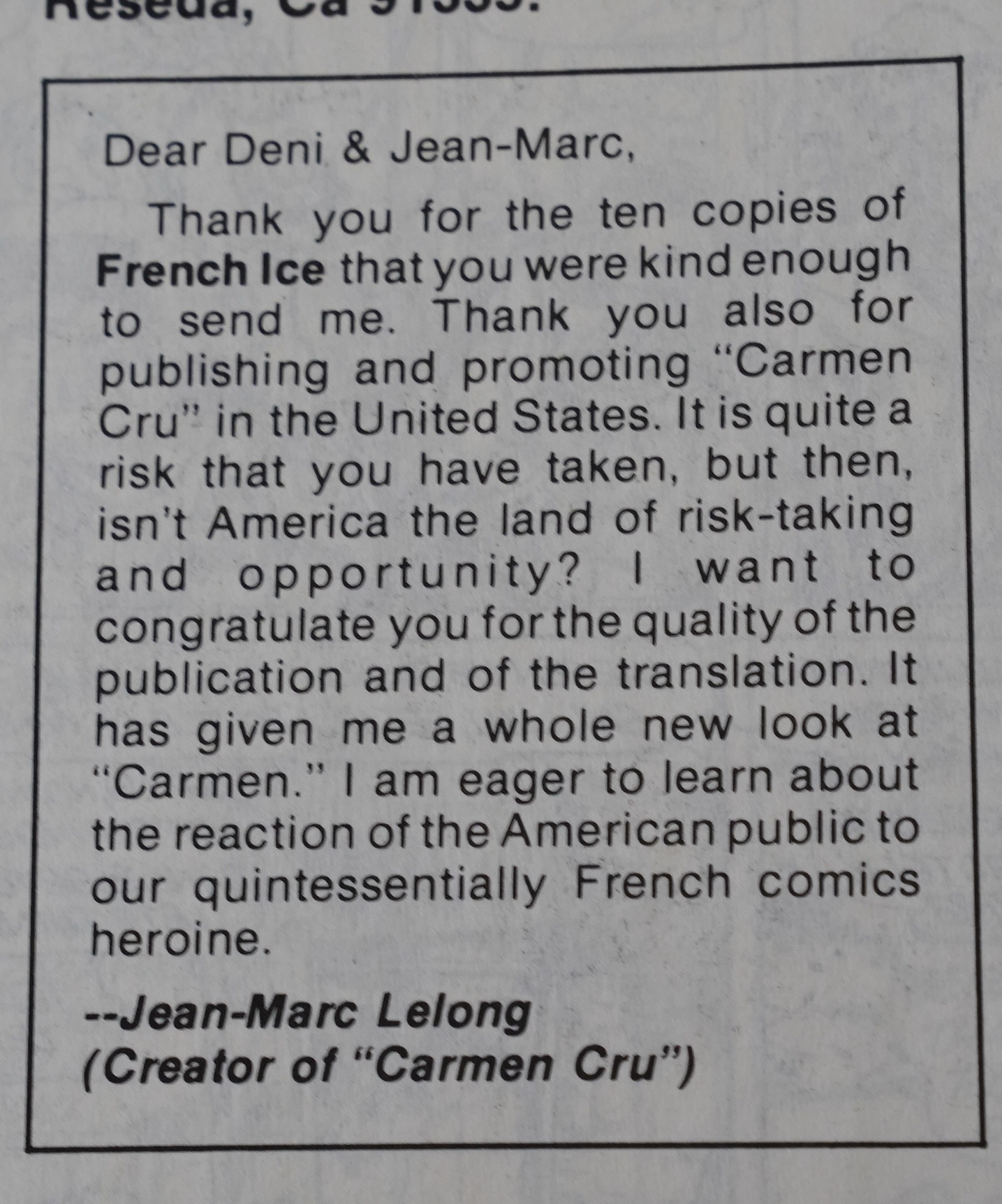 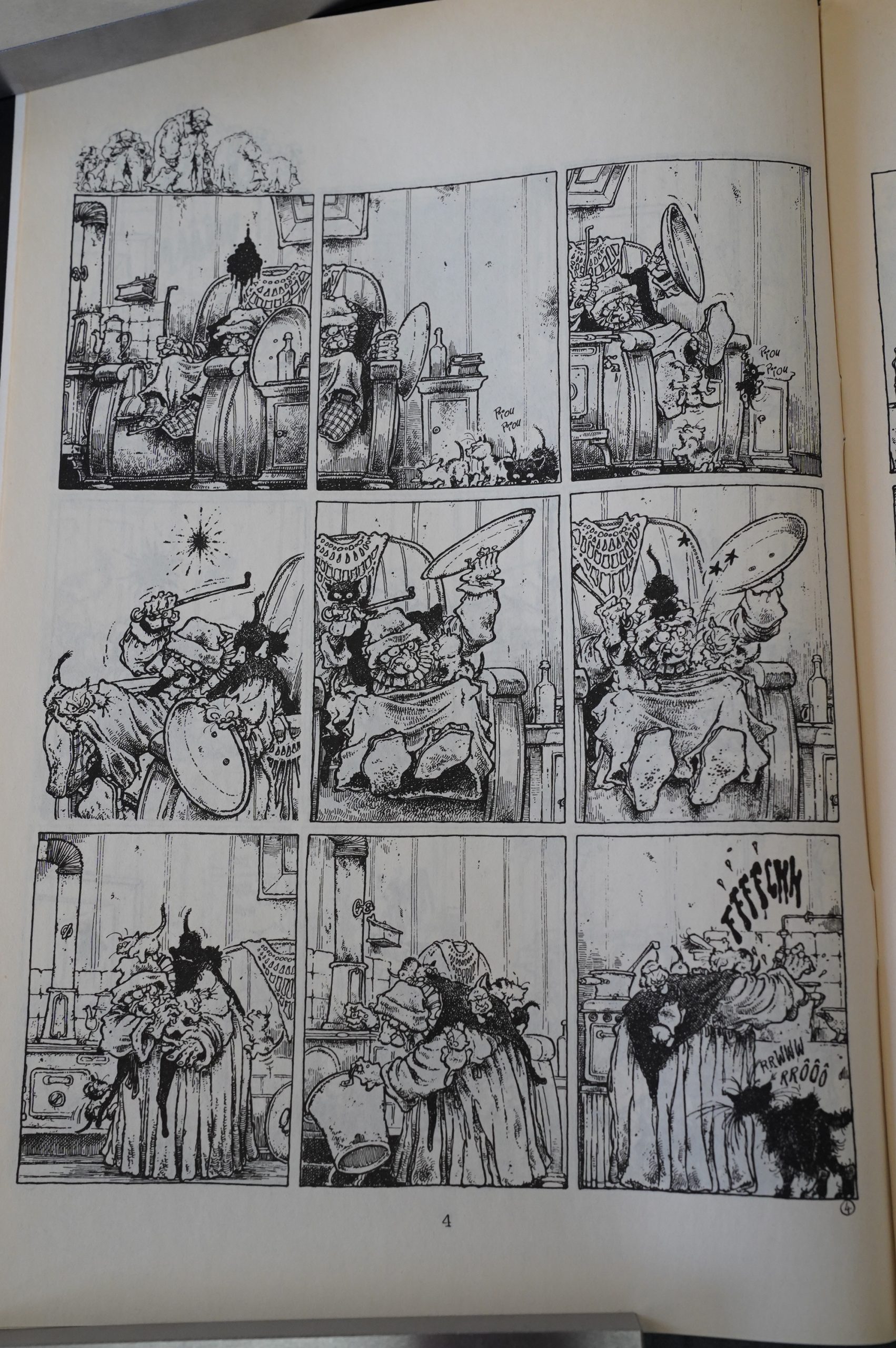 A rare silent sequence of… er… not quite domestic bliss.

But pages like this are pretty difficult to parse immediately, because it’s hard to tell the difference between the characters and the bric a brac. Which makes me wonder whether these pages were originally coloured? 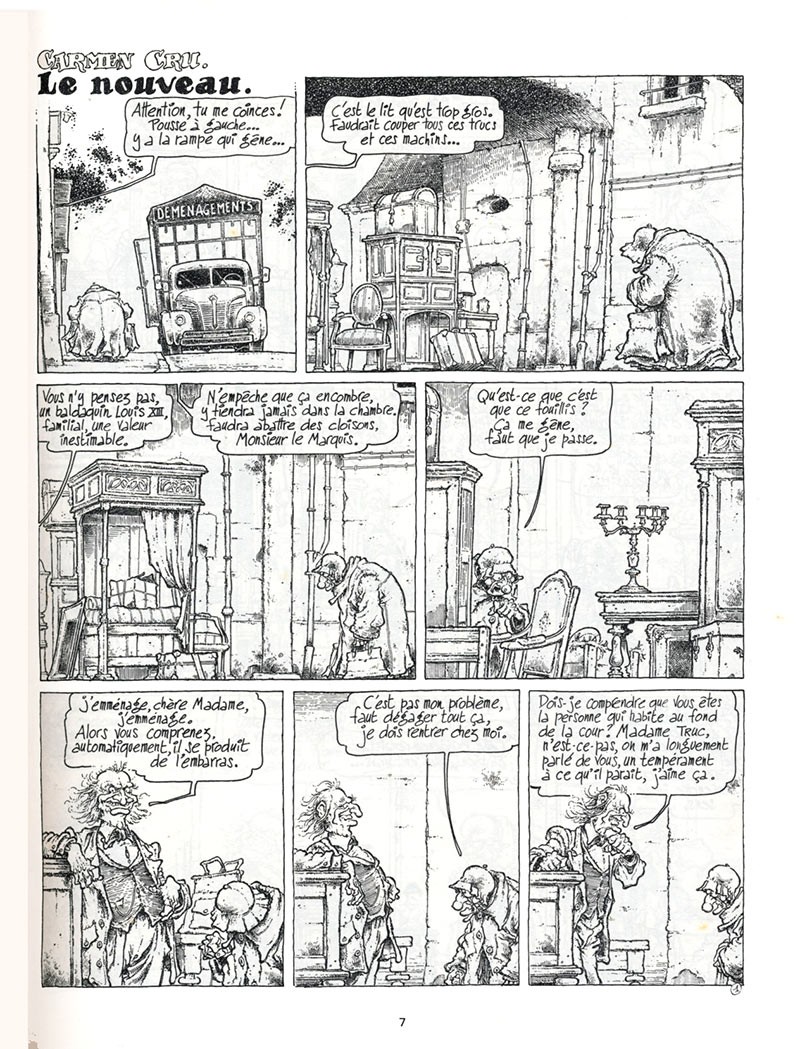 Nope. Doesn’t look like it. But printed in a large format, and with better paper stock, perhaps it’s more legible… 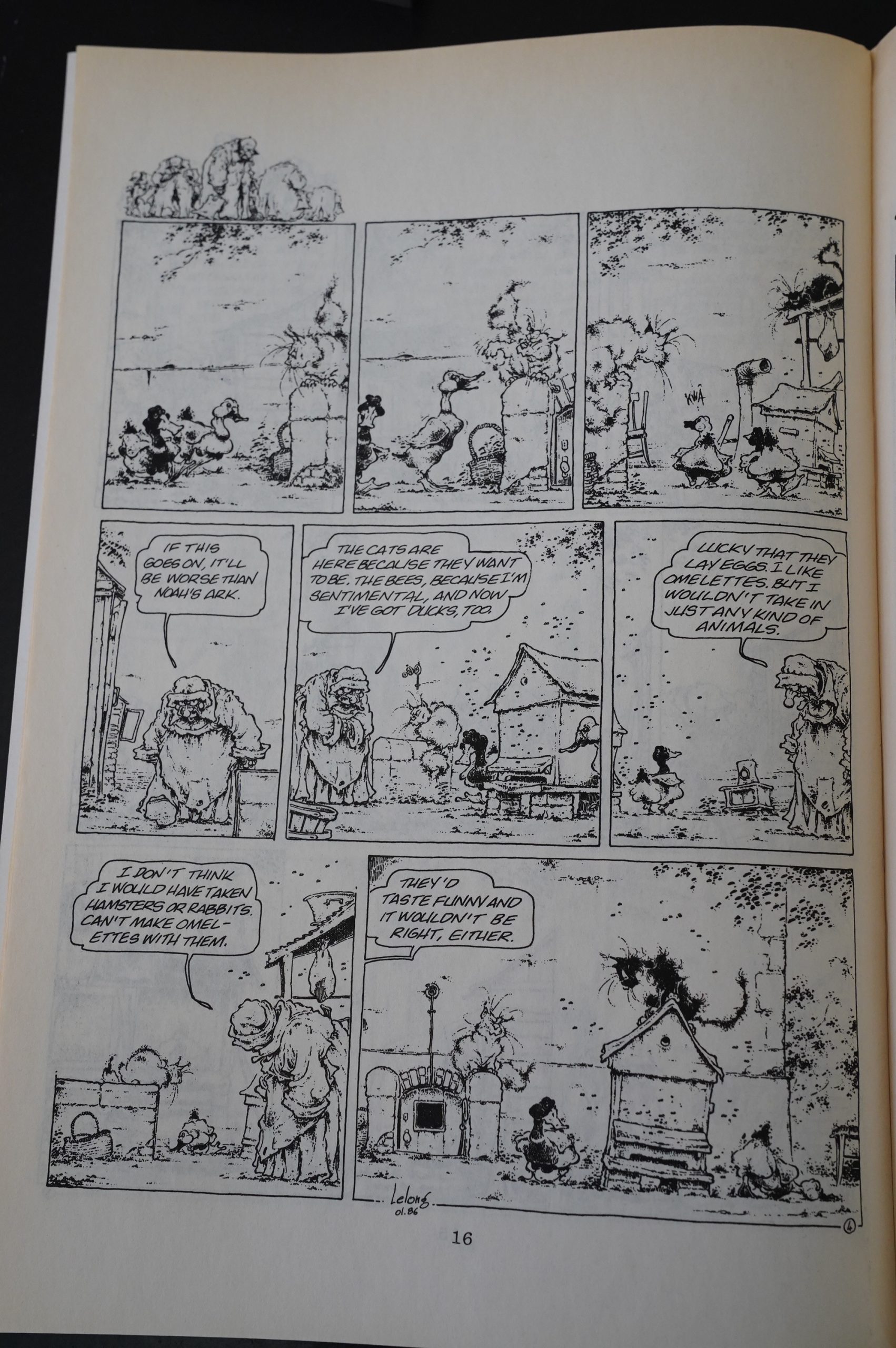 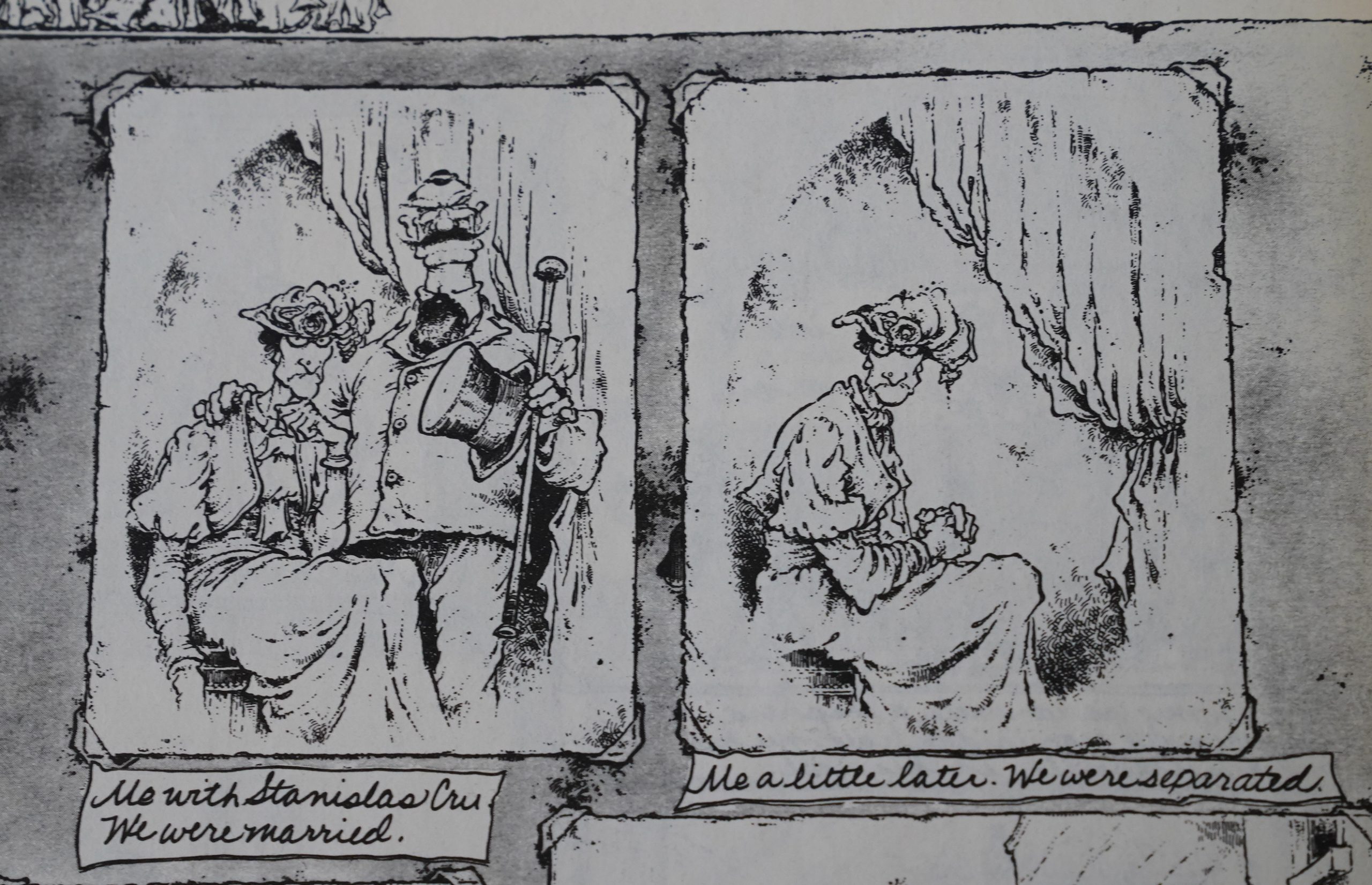 In one story, we get Cru’s back story — presented as snapshots from a photo album. It’s very effective (and funny). Then! Suddenly! With issue 7, we get an additional series: Kador by Binet. (And, yes, you guessed it — Binet’s name isn’t mentioned anywhere except as a somewhat illegible signature on the opening page.)

I think I remember seeing Kador being used as filler here and there in Scandinavian anthologies from time to time. Binet’s got a very classical French gag comic line, and the it’s very high concept: Kador (the dog) is very smart, and his owners are … not very smart.

I think this strip is the closest we get to having some pathos here — Cru obviously wanted to join in the music, but just couldn’t change. 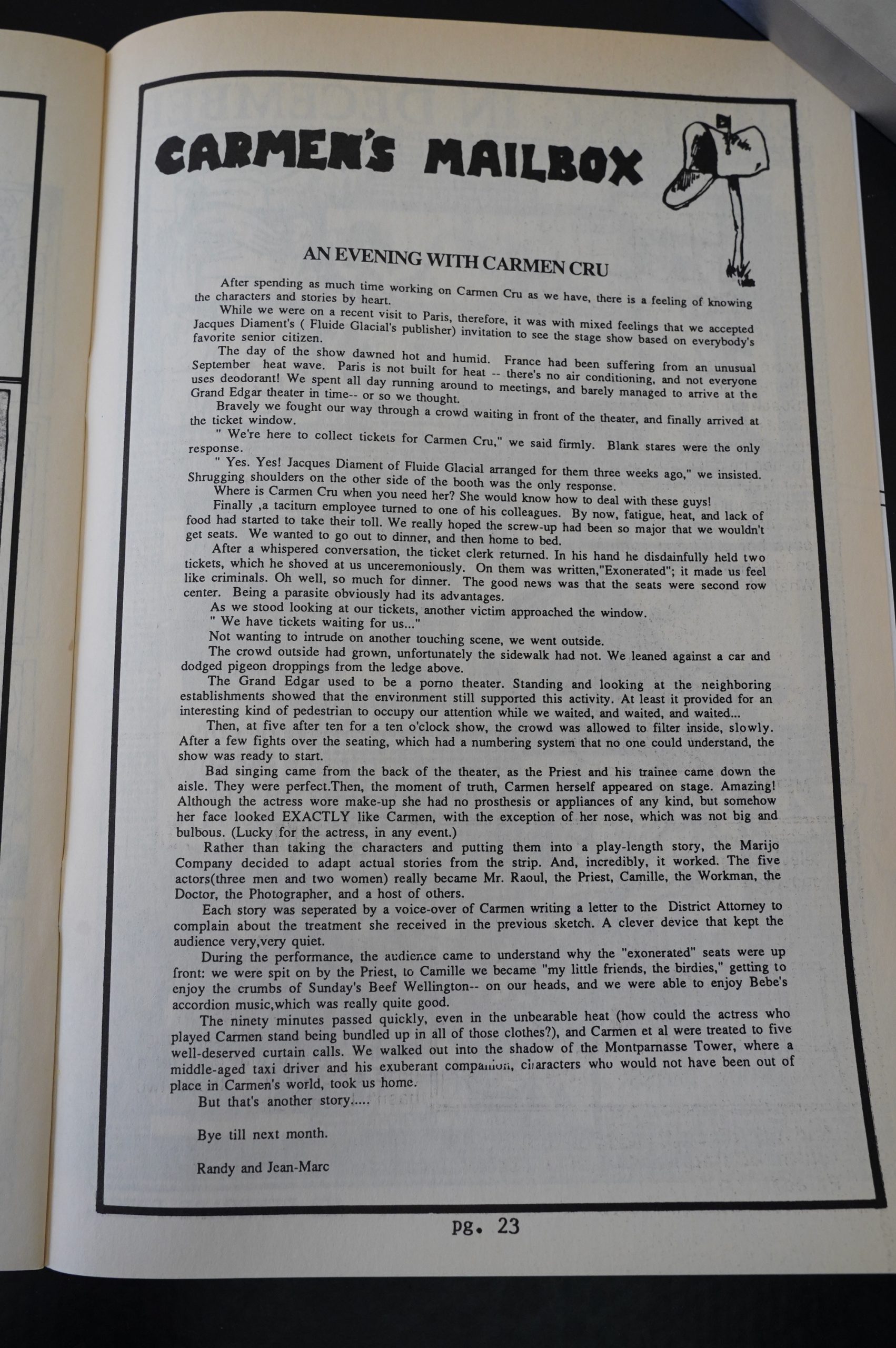 The Lofficiers saw the Carmen Cru theatre production, and it sounds like a good time was had by all. For three pages, Cru goes all nice and stuff! But! Gasp! It fortunately turns out to be a nightmare. A horrible, horrible nightmare.

Deni Loubert lets us know that there’s probably not going to be more than 16 issues — because they’re running out of Carmen Cru strips. And, indeed, there had only been five 56 page albums published by this time.

She also notes that sales weren’t spectacular, but better than what she had expected. So we get a couple of the very earliest Cru stories, where Lelong was using a more straightforward art style. But Cru’s personality was already in place. In the 13th issue, we get a “coming next”, but it was never published. This was in April 1988, and Renegade would continue publishing until September, but perhaps Loubert couldn’t find money to finance the printing?

Lelong died in 2004, and only two further Carmen Cru albums were published before he died. (And one posthumous album.) Carmen Cru has never been reprinted in English again after this.

French Ice will end with #16: “We will
have run out of ‘Carmen Cru’ material
by then,” said publisher Deni Loubert.
“We’re pulling out all stops and printing
stories that I had reservations about
because of the French sense of humor.
It’s very earthy humor and rm not sure
some of the readers will be able to
appreciate it.” For this reason, there will
be warnings on the covers of French Ice
about the mature themes, mostly in the
Kador stories.

February brings us an all-Carmen Cru
issue, featuring the first two Carmen Cru
stories ever done by Lelong: “Chips &
Peanuts” and “The Crooks.” Fans of
Carmen will be interested to see these
stories because she doesn’t have quite as
refined a look as she has later. Since each
of the special stories is four pages long,
there is for t’M) more Carmen Cru
stories, plus a Kador feature, “Kador on
TV,” in which he gets interviewed on
In March, there will be a special issue:
three Kador stories and one Carmen Cru
story. The titles of the Kador stories are
“The Separation,” “Kama Sutra,” and
“The Punishment.”
“The Attack,” “The Vermin,” and
Carmen Cru continues in French Ice.

Besides homages (or rip-offs,
depending on how charitable you
want to be), some French comics are
making their way to these shores on
their own. Renegade Press,. for
instance, has a two-dollar black-and-
white title called French Ice featur-
ing a bad-tempered bag lady named
Carmen Cru. And what do you
know—our bon ami R.J.M.
Lofficier has struck here, too, this
time as translator (other credits are
vague, but the strips are signed
Lelong and the copyright notice is
made out to Odaudie-Lelong).
Carmen Cru is an unsettlingly ugly
old ‘*oman who lives by herself in
a run-down house; she may be old
and decrepit and poverty-stricken,
but she is also independent and has
at least a few of her wits about her.
If other people try to take advantage
of her, she usually manages to get
some of her own back. When the
city garbagemen don’t pick up her
trash, she takes it downtown to City
Hall and dumps it in the offices of
the Sanitation Department. Carmen
Cru is not exactly a pleasant or a
very cheerful strip; this is the sort
of occasion where the reviewer gets
to use words like “mordant” and
“biting.”
It’s probably not to
everyone’s taste, but it’s well done
for whatit is, and it may be worth
$2.00 to find Out if Carmen Cru and
your sense of humor play in the
same ballpark.

Renegade Press
deserves meritorious note for introducing
French Ice, [elong’s strip about an irre-
pressible old curmudgeon named Carmen
Cru doing battle with the annoyances of
modern life, as a regular series. [dong’s
is a droll and beautifully-drawn strip, and
the mordant humor is built on the old
woman’s skirmishes with petty bureau-
cracy, bratty kids, worthless relations, and
myriad Other afflictions that conspire to
make life miserable for an old woman.
(As Carmen puts it with exceeding clari-
ty to a laborer digging a trench outside
her door, “They’re taking advantage Of
my senility to persecute me.’ The humor
is unreservedly subversive and anti•social.
She’s earned the right to be left alone and
live Out her years as she wants, but the
world keeps intruding. As a result, you
applaud this bedraggled, impossible sur-
vivor as she engages in the most outra-
geous behavior. Kudos to R.J.M. Lofficier
for a completely successful translation of
the material into English.
If you love the medium, don’t miss this
one. French Ice is classic material, and
it would be a crime if Renegade can’t
make ends meet with this title.

French Ice. It is a tremendous
commercial success, a sell-out,
with the publisher having to cut
reorders by 20%. It is also a riot.

Everyone in the book is fabulously
ugly, and yet the overall impression
is one of beauty. Lelong’s work is
always poised, exquisitely ren-
dered. and finely detailed. His gift
for caricature suggests Mort
Drucker at times, Goya at others.
He’s great.
French Ice is one Of those rare
books that has the potential to
reach a readership outside of the
usual comic book ghetto. It is a
beautifully-crafted, funny work
utterly unpolluted by the cliches of
the modern mainstream comic. If
the goal is to appeal to a new,
broader audience, that’s one way
to do it.