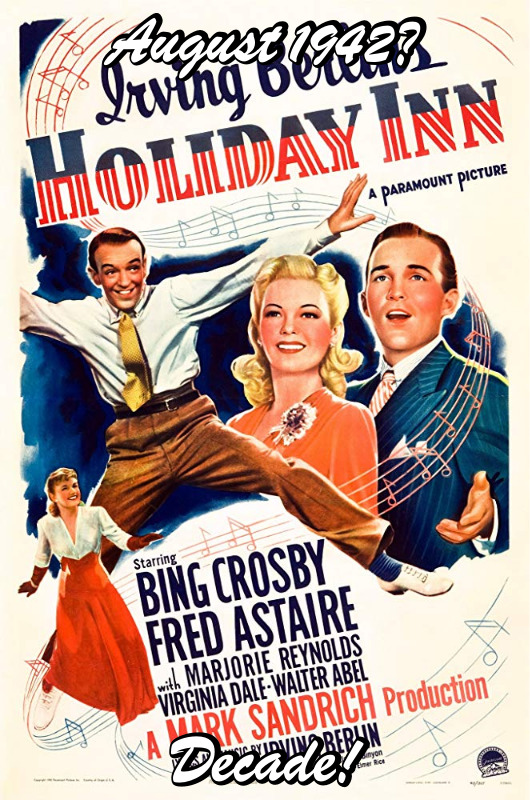 I wonder whether I have the release date wrong here… or did they really release an Xmas movie in August? Watching movies by month I wanted to experience the change of the seasons, but…

Anyway, it won the Oscar for best song: White Christmas, and no surprise.

The setting is the classic musical setting: In a theatre. That makes it a lot easier to drop some musical numbers in at random without having to work the pieces into the actual story line.

The director, Mark Sandrich, had done a series of extremely successful (both at the box office and otherwise) musicals in the 30s. I mean… The Gay Divorcee, Shall We Dance, Follow the Fleet… And this is very much in that mode.

Which is fine by me: This is non-stop amusement with the occasional hilarious moment. It’s just so well made; it’s just perfection. Really the thing to distract you from what’s going on in Europe (except for a brief moving collage in the last third).

Virginia Dale isn’t a name I’m familiar with, but watching her dance with Fred Astaire is a thrill. They really fit together wonderfully.

There’s a plot of sorts in between the various bits that doesn’t really amount to much of anything, but it’s much better put together than these things usually are. It’s a movie that’s obviously been put together as a simple showcase for Bing Crosby, but it ends up being kinda perfect.

(But it might be problematic because of the blackface scenes. It’s interesting that they intercut this scene with scenes of the black maid (who is called, yes, “Mamie” (played wonderfully by Louise Beavers (last seen in Reap The Wild Wind))) and the maid’s children singing along with the song.)

This movie could perhaps have been a bit tighter in the last third, where it gets more plot heavy.

The meta bits at the very end, where Bing enters the set where they’re recreating his inn (which is, of course, just the inn set) is whee.

Popular movies in August 1942 according to IMDB: