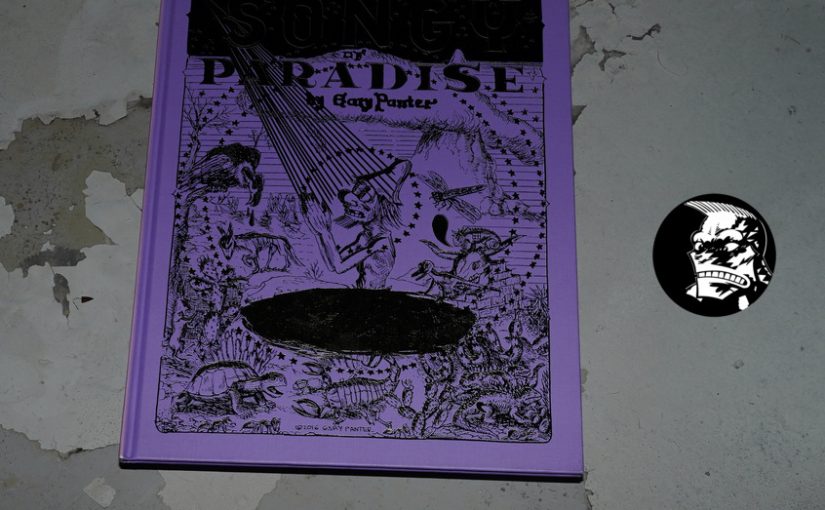 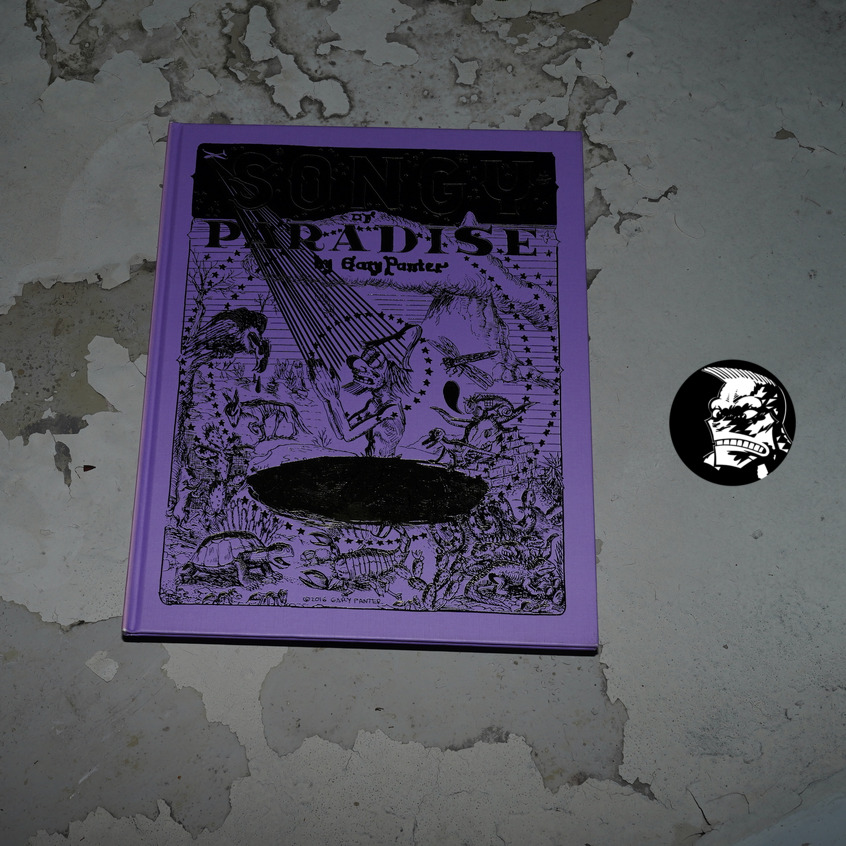 I had totally forgotten about this book. I mean, both that I had it and what it’s about. 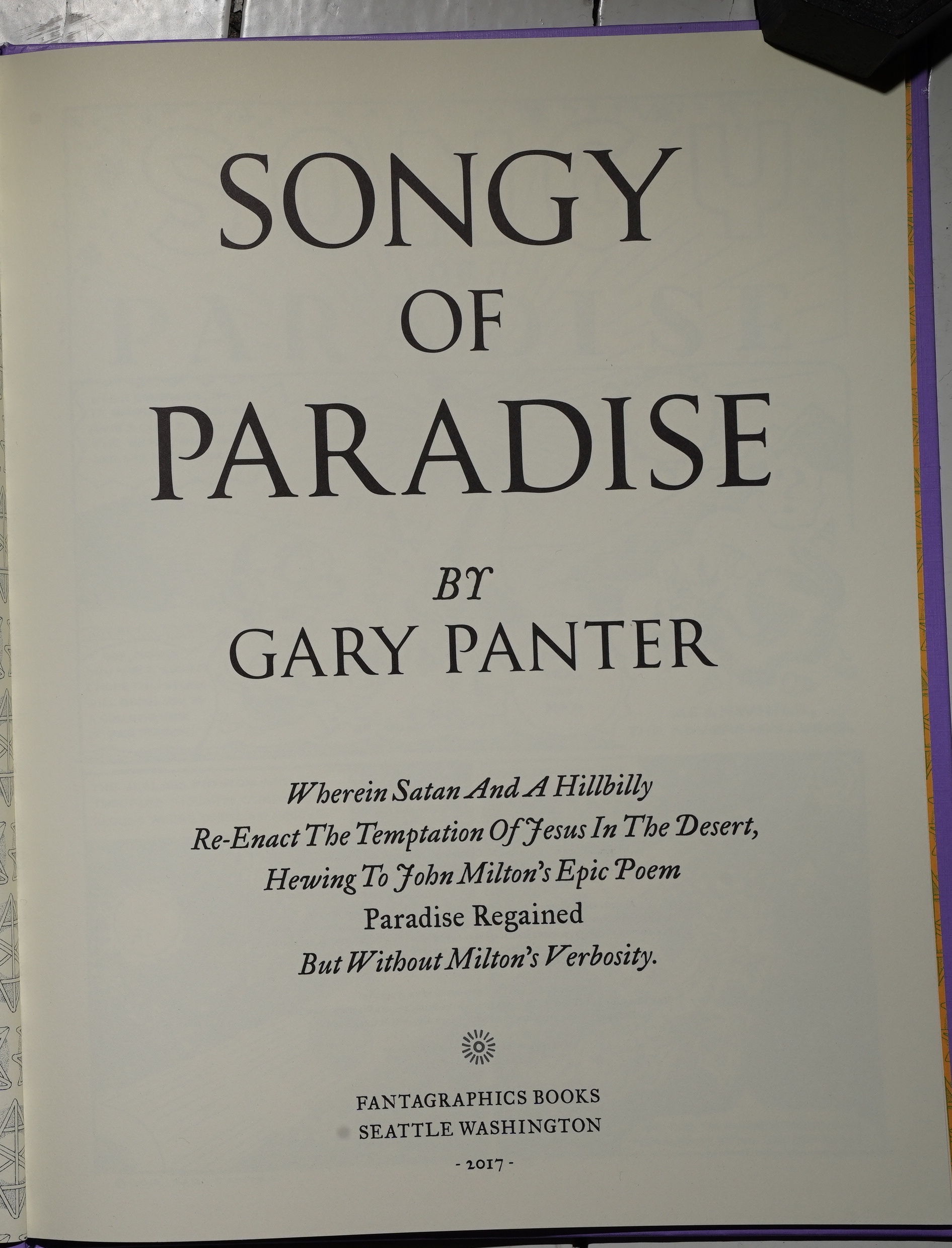 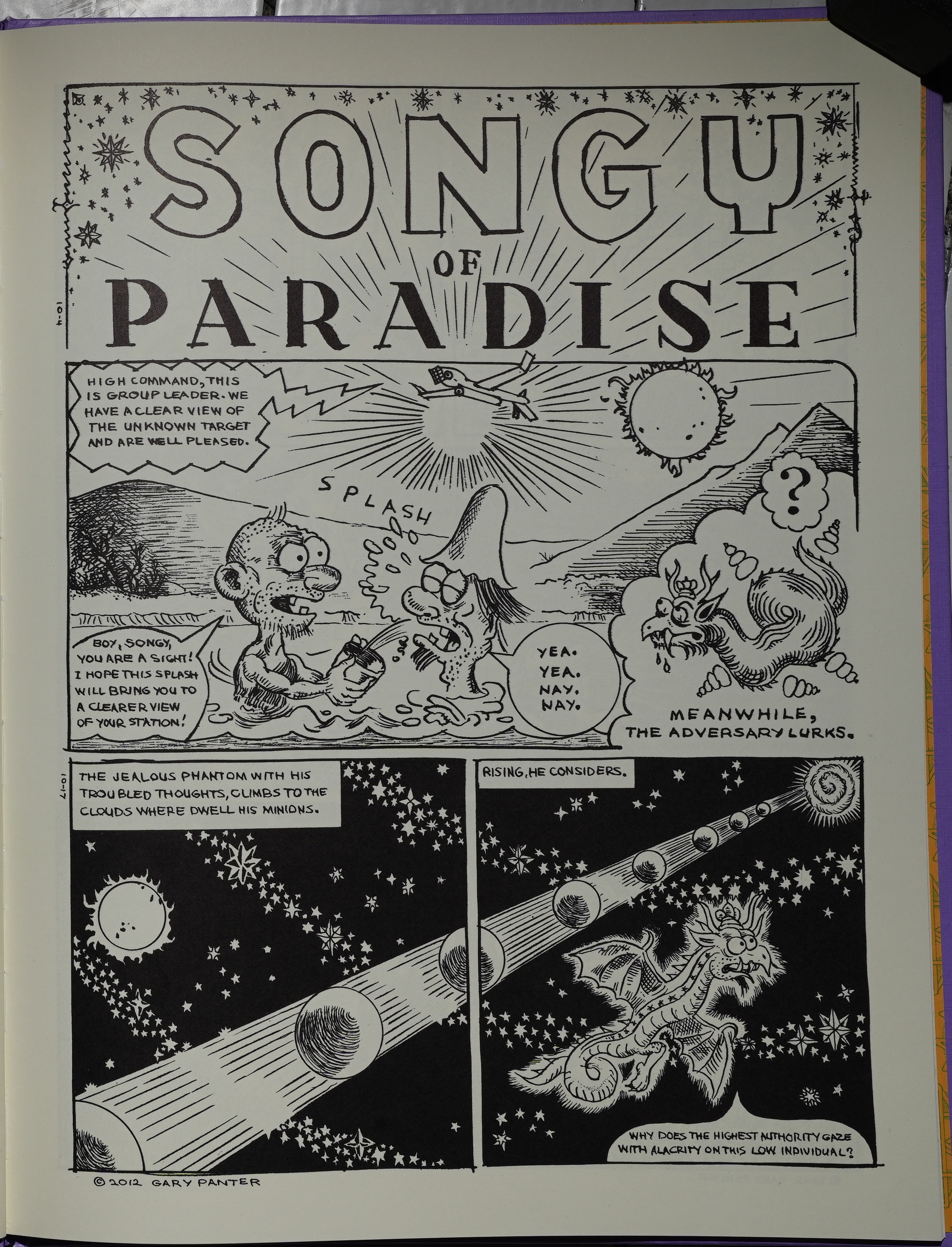 Anyway, this is a very large, thin hardback book with metallic inks on the cover — so it’s basically like all of Fantagraphics’ Panter books. (They have somewhat different sizes, though.) I wonder why they hit on this format… it seems so incongruous with Panter’s artwork. Perhaps that’s why? Panter described them as “fetish objects” in an interview… 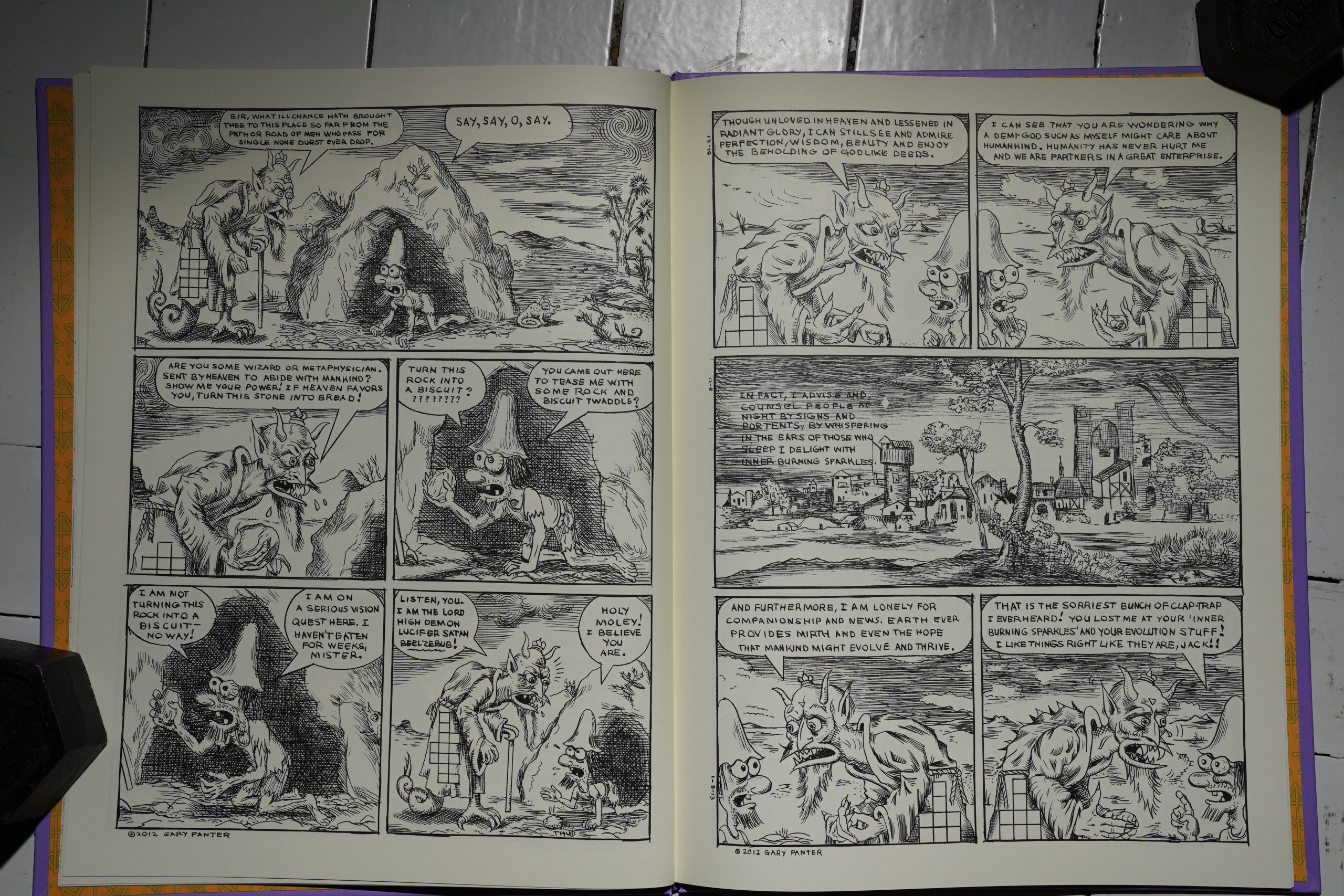 Jimbo in Purgatory was very, very dense. This is much lighter reading… and it’s funnier. 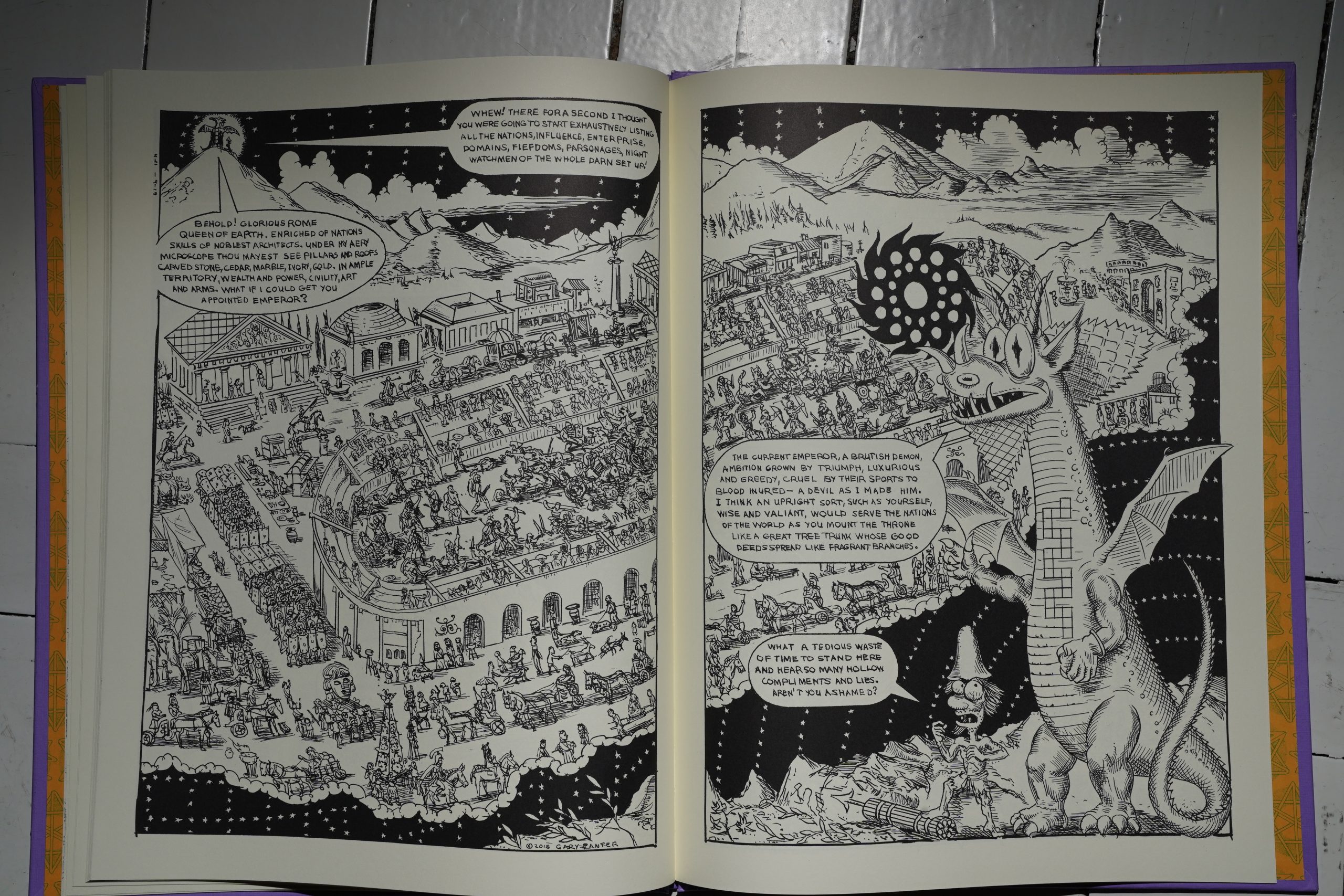 It’s so short, though. It feels very slight.

I enjoyed Songy of Paradise from an adaptation perspective, and I love the detail it has for being such a quick read. I think you will enjoy it more if you have some experience with Milton or Panter’s earlier works, but it is a fun book on its own.

Which is a huge part of their appeal, of course. At 35 bucks, a book this slender (if gorgeous) had damn well better give you plenty to mull over, and there’s no doubt that this does : I’ve read it four times since buying it just over two days ago, and new elements — as well as new ways of interpreting previously-noted elements — reveal themselves each time, and easy answers are not just in short supply, they’re downright non-existent. Is Songy’s dipshit dialogue and general obliviousness a sign of his pure-hearted innocence, or of contemptible ignorance? Is he simply a stand-in for Christ, or for the author himself? Are the subtle changes Panter makes to Milton’s conclusion meant to make his “happy ending” ironic — or anything but?

There was even a roundtable:

When I first finish Songy of Paradise, I’m struck by the comic’s unparalleled demanding that the reader step back. The book is large — this many by this many inches. These dimensions are by no means an accident, and they don’t seem to be a last minute decision either. Each page at about the size of an art print for one’s wall, the work is independently beautiful, even if removed from the narrative and seen at a glance. Panter’s understanding of composition in putting this book together makes it a pleasure to look at, whether you’re fluent in its references or not.

I think the complexity of Songy is of a different order… it’s more Little Lulu than anything else.