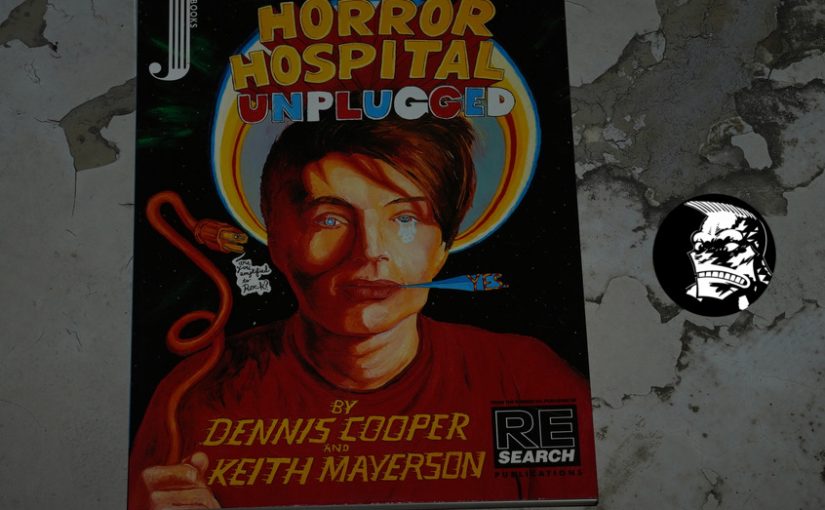 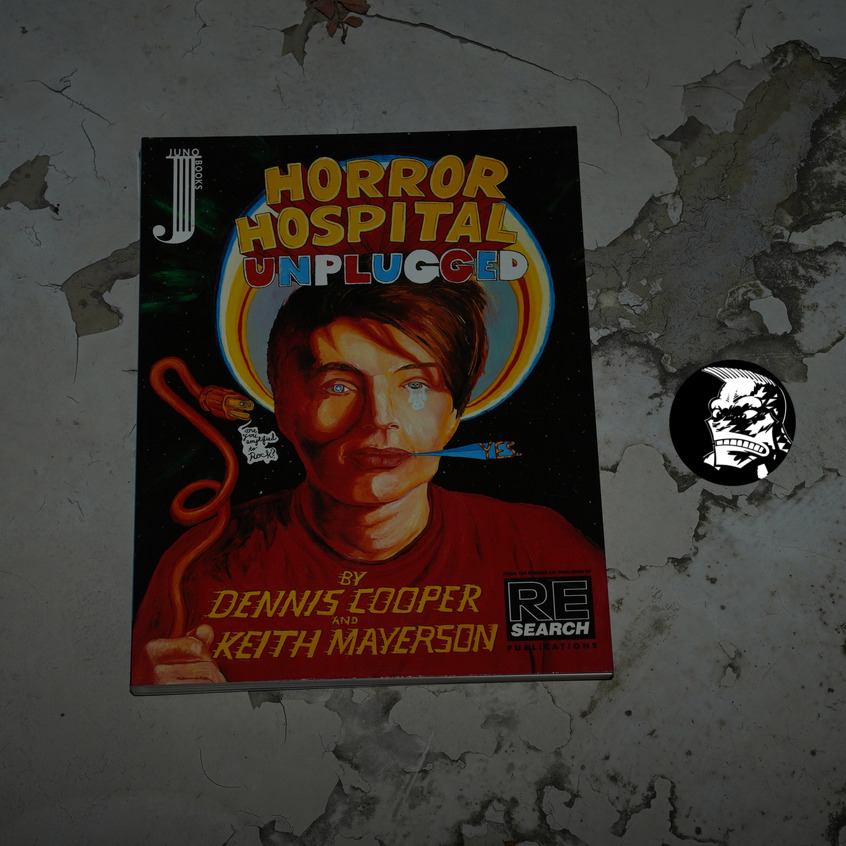 This is, once again, slightly off topic for this blog series, but I thought it might be vaguely interesting to have a look at a Re/Search book. In the 80s, Re/Search seemed to exist on the margins of both comics and music culture: They were involved in bringing more attention to industrial culture, as well as body modification, exploitation movies and avant garde comics. So you’d see these books in obscure corners of some comics stores (as well as in music shops).

This is from Juno Books, which happened after Re/Search broke up, I think? And may be the only actual comic from these people. 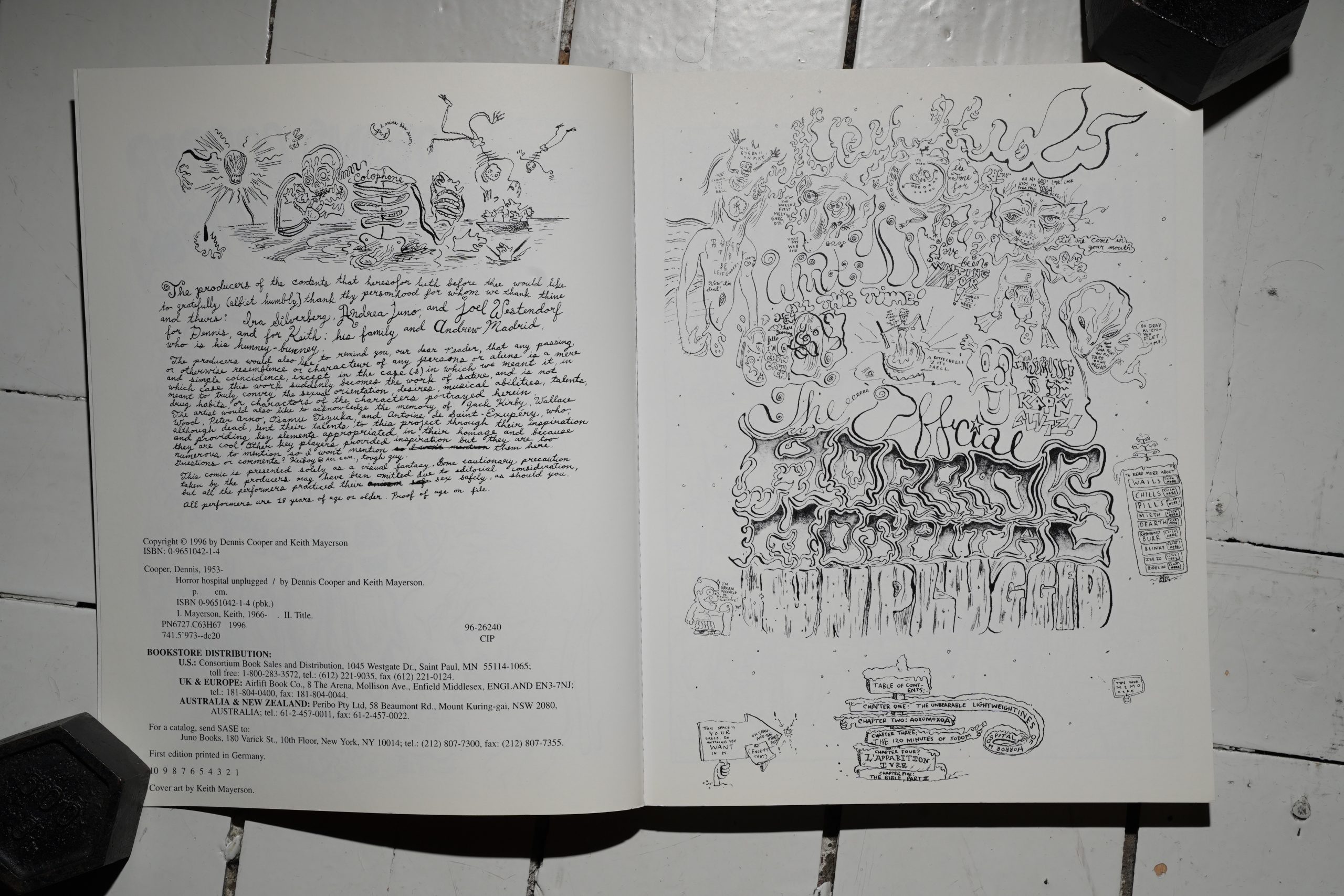 Dennis Cooper is a writer (and filmmaker) who’s done a lot of er challenging stuff. I haven’t followed him at all, but whenever I’ve bumped into his stuff, I’ve kinda regretted it? His scale goes from “atrocity” to “really horrible atrocity”, and that’s not my thing. 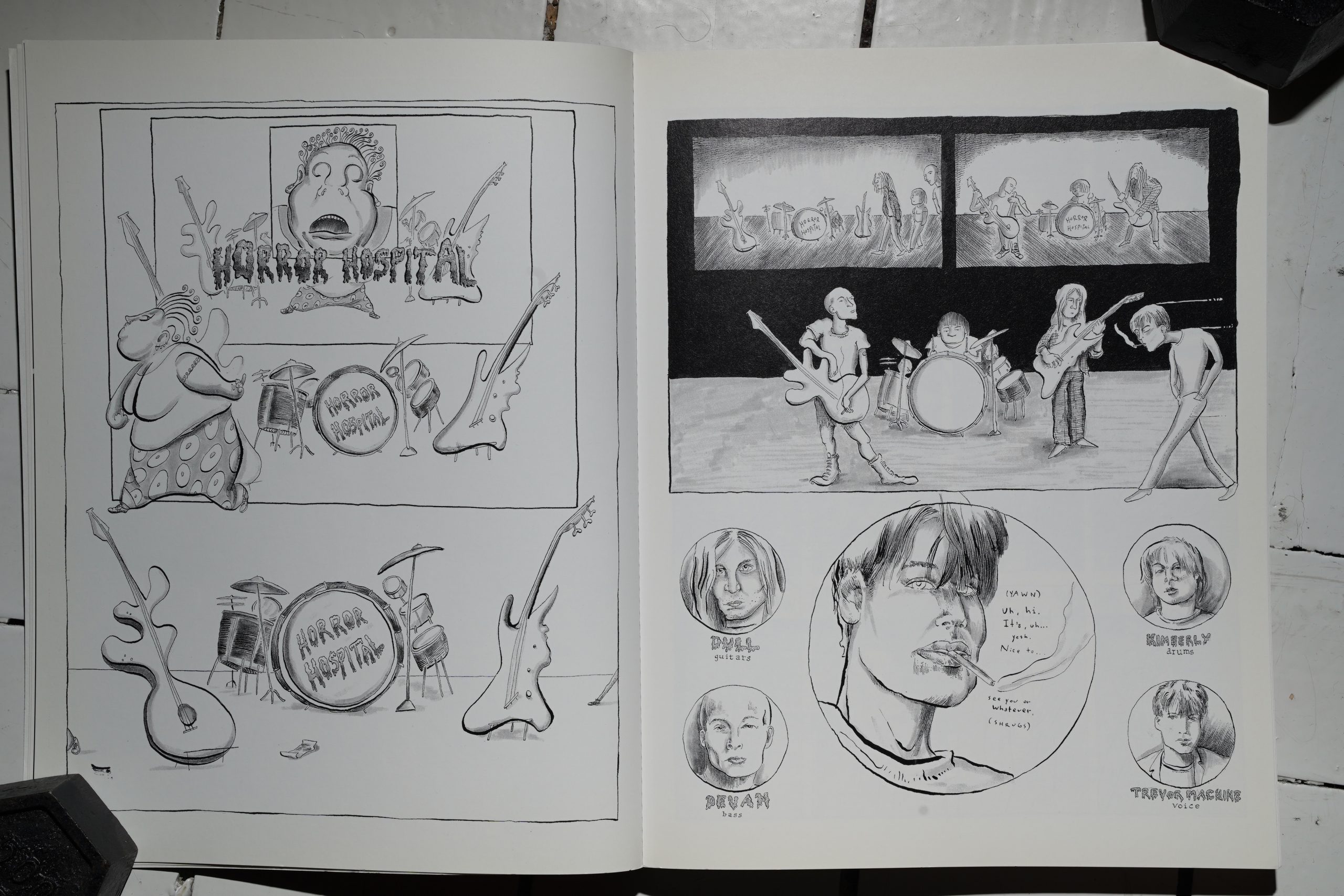 This is apparently based on an early short story, expanded into a ~250 page graphic novel. It’s about an LA punk band. 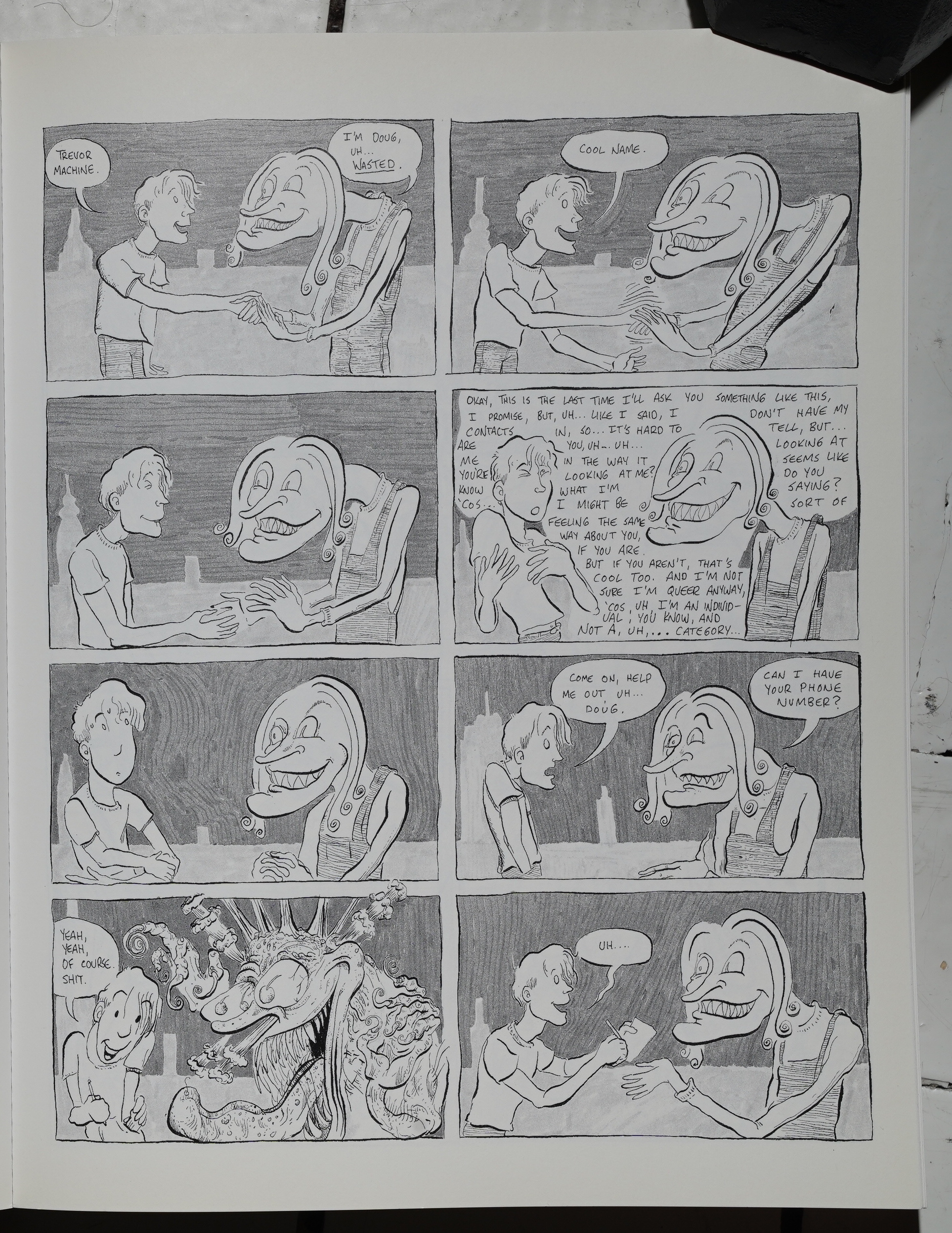 Mayerson’s artwork changes from page to page — I guess he’s doing most of these pages in a sort of mid-70s underground style? 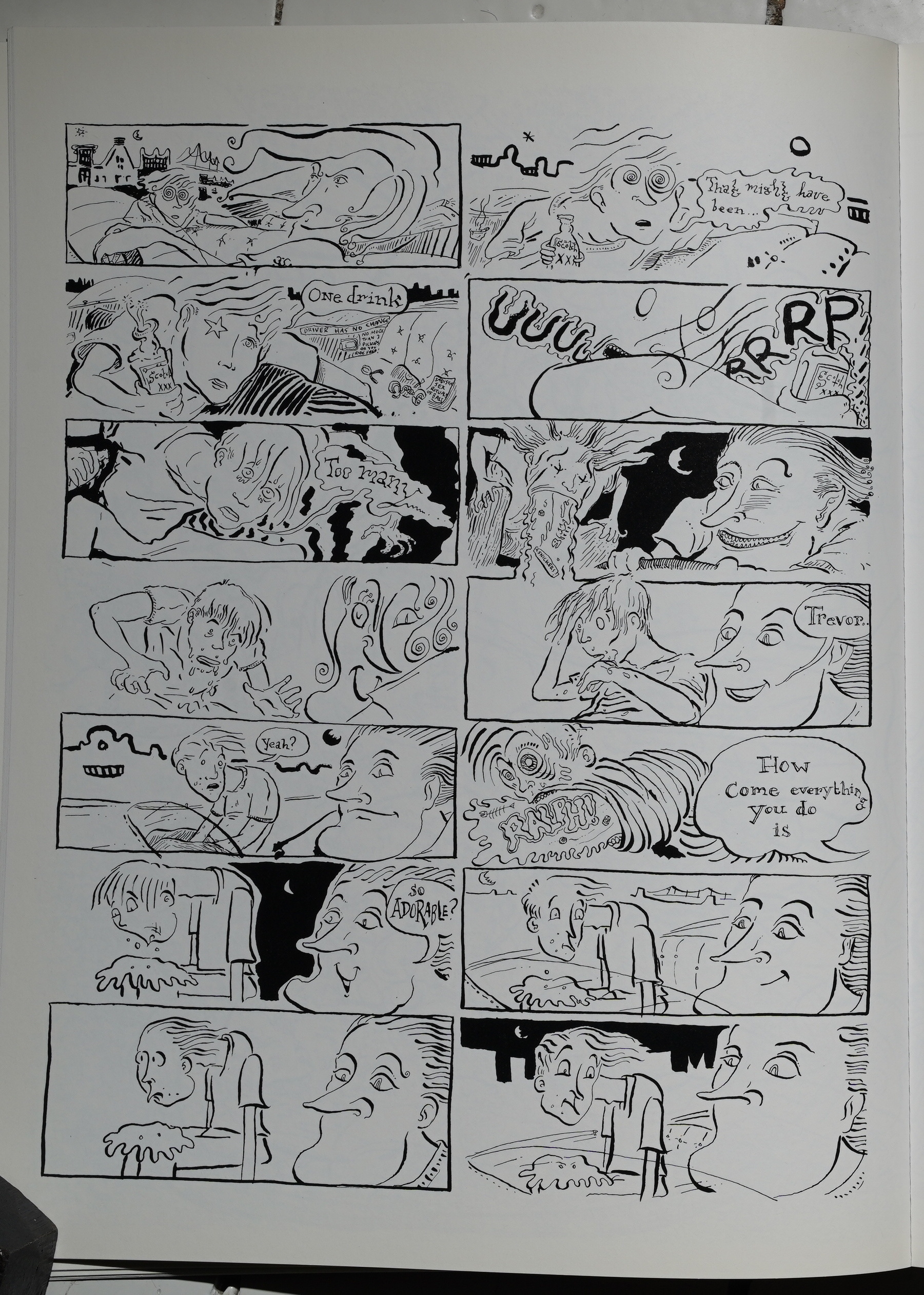 The variety is entertaining, and Mayerson sure knows how to get those comedic beats in. I don’t get the feeling that he’s really much into the comics per se, but he’s using all these various forms in interesting and clever ways. 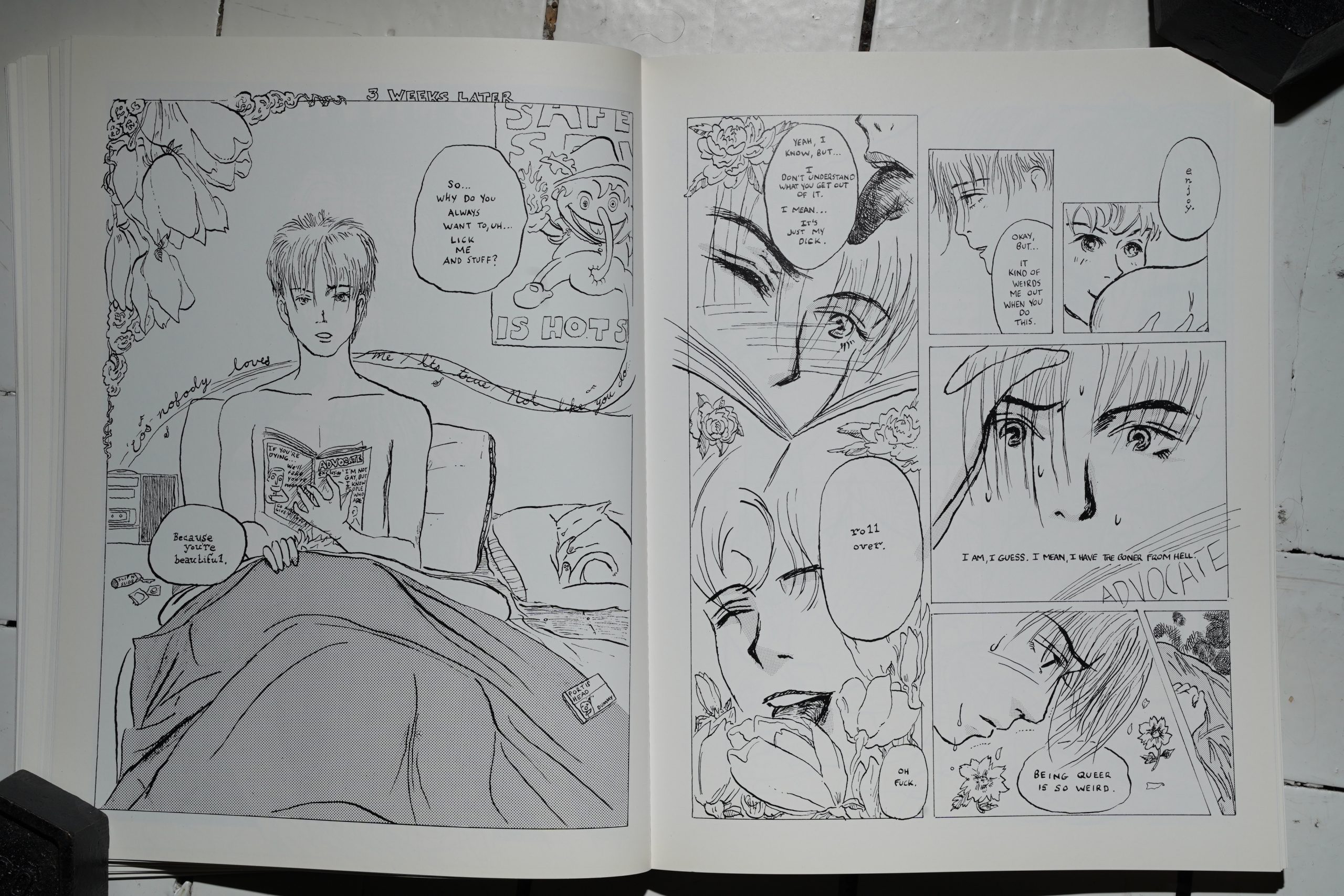 For instance, in the romantic bits, he switches totally to a Japanese-inspired romance comic style, and he does it pretty much flawlessly. 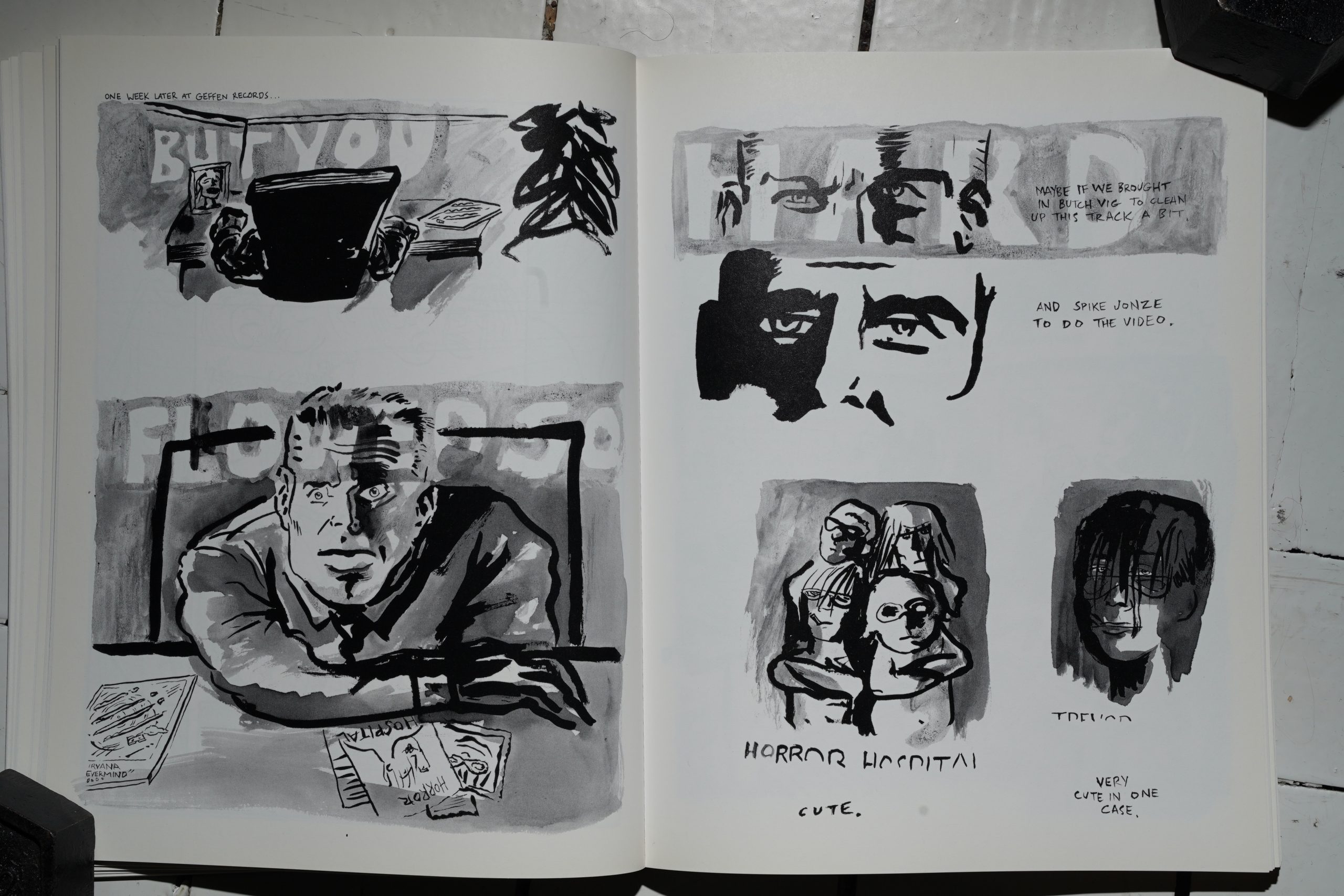 And then, bam, this style for a business meeting.

This book is a pretty quick read for such a long book. I guess ten years later you’d call this style “decompressed”, but it’s unusual for a mid-90s book, when it seemed like everybody tried to jam as much storyline into as few pages as possible (possibly for economical reasons). 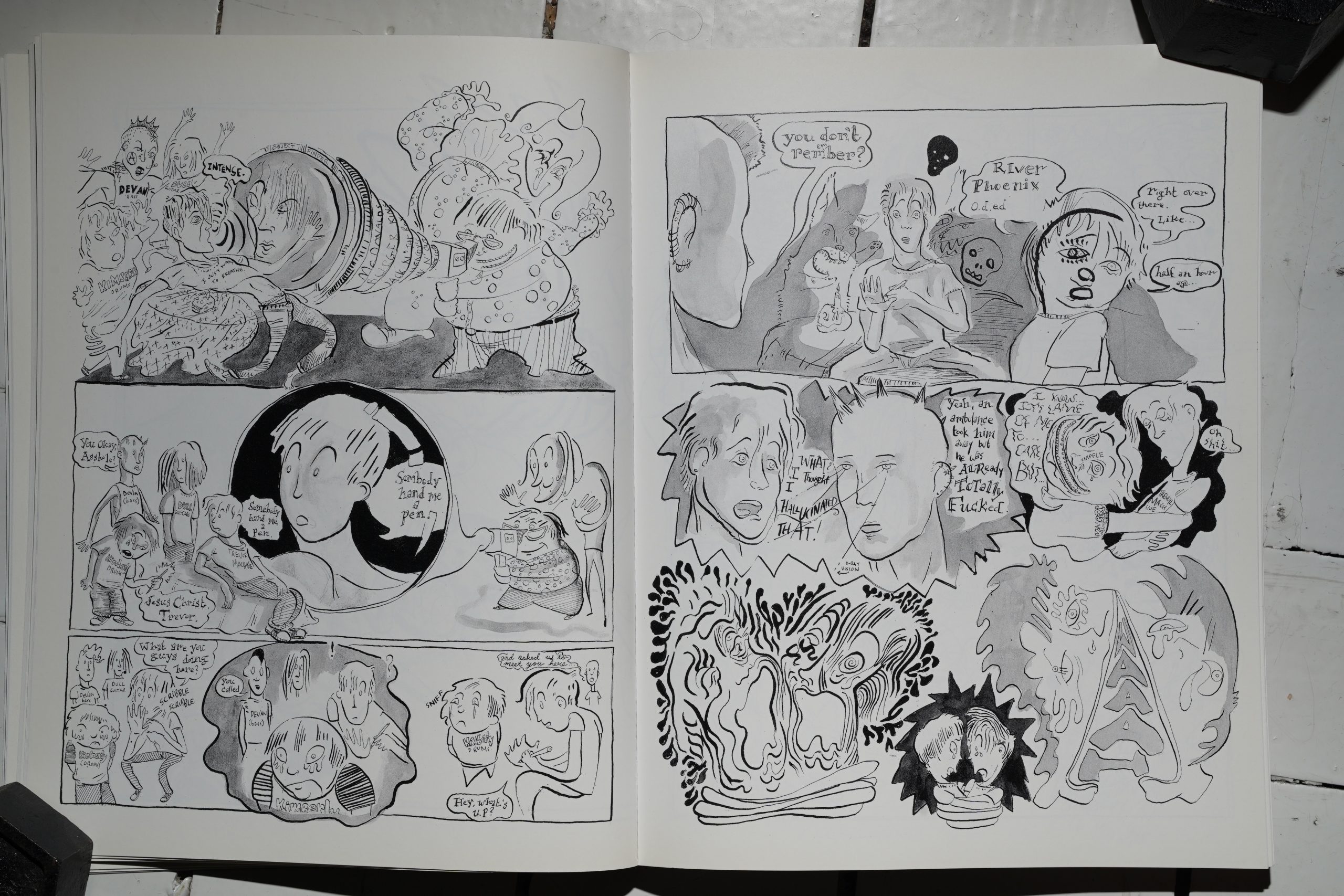 Anyway… the story’s surprisingly straightforward: It’s about a young band, a recording opportunity, drugs and sex.

This all makes this a pretty convenient counterpoint to draw attention to one thing about “the Raw generation”: These are things they didn’t write much about. I mean, sex and drugs. Think Panter/Barry/Coe/Beyer/Spiegelman etc — extremely little sex and/or drugs going on. That was more of an Underground comix/hippe thing, and the punk generation had moved on to other concerns. 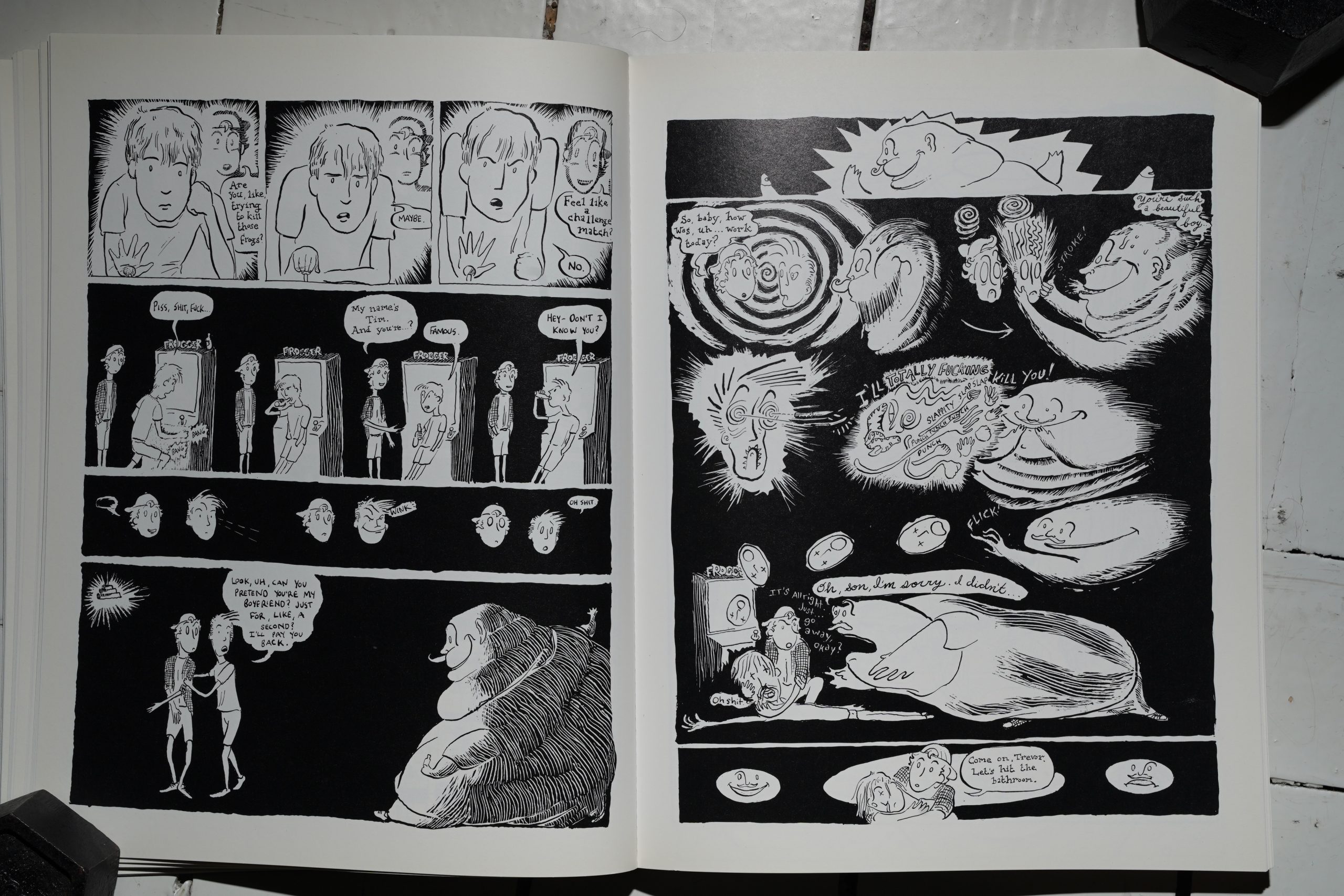 Mayerson’s storytelling is usually very clear, but he goes sort of obscure at points. But then again, there’s a lot of drugs involved, so it’s appropriate. 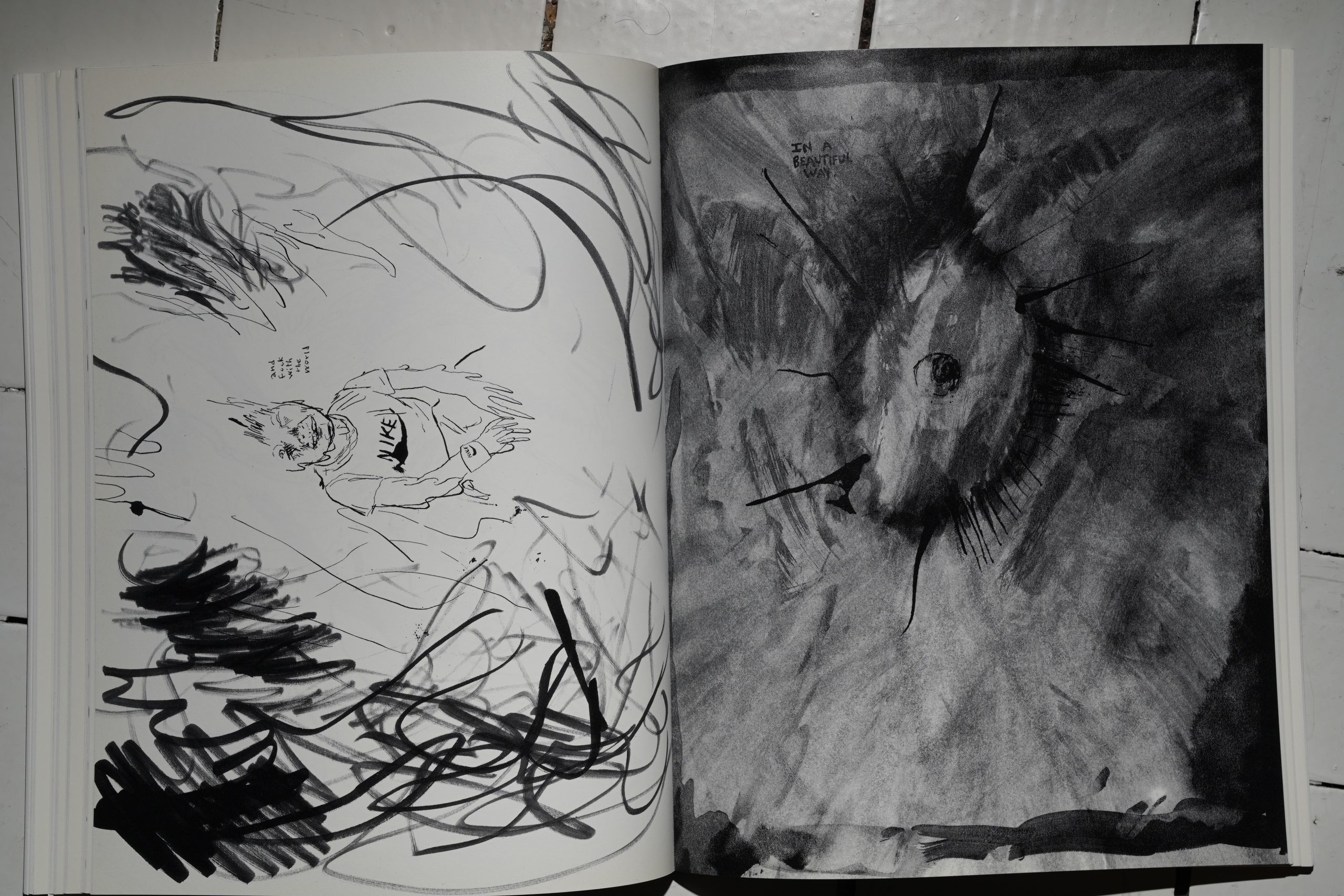 And, yes, since it’s a Cooper story, we do get around to some atrocities. But this book is 76% atrocity free!

Horror Hospital Unplugged is a book that stands apart, as much for its literary and visual qualities as for its treatment of the age-old story of how young people have to find their way in the world of their cynical and scheming elders.

The first 1996 edition of this book is out-of-print but can still be found online. A reprint was published in 2011 by Harper Perennial.

I am not sure that I could convey how mind-blowingly stunning this book is. It is, however – and the ending made me cry, which does not happen to me often in reaction to something written or illustrated.

What’s unexpected is the ways in which Keith Mayerson’s eclectic illustration style bring both Cooper’s sense of humor and human tenderness to the front of the narrative. Scenes that would seem stark and desperate with Cooper’s narration become farce. The characters are masochistic clowns and the action becomes dark slapstick similar to Tony Millionaire’s comic strip (which started slightly later in 1998) Maakies.

It’s also impossible to ignore how 90s the whole thing feels. As a re-published volume, the work could be a historic relic from 90s zine culture, representative of an ethic and aesthetic in pop culture that has been lost, but retains its relevance through the strength of the narrative. River Phoenix’s overdose, and his subsequent ghost, play a major role in the decision making. Today Phoenix could easily be replaced by Amy Winehouse. The pop culture figures in the story, whether it’s an attention seeking, belligerent Courtney Love or a pervy, power-drunk David Geffen, are signifiers for basic archetypes.

While “Introducing Horror Hospital” lacks the violence of much of Cooper’s work, the graphic novel adaptation assaults the reader with Mayerson’s drawings. The execution of this book feels like an act of anger or frustration or pain. Mayerson attacks these pages with his pen. Grotesque nib drawings splay across the page. Characters’ faces twist from panel to panel, morphing into Tex Avery wolves as drawn by André Masson. Other pages suggest Antonin Artaud drawing a MAD Magazine spread of celebrity caricatures. Some pages are dense with gags and notes and maze-like arrangements while other panels feel like they were thrown onto the page. “Did he draw this on uppers?” is a fair question.