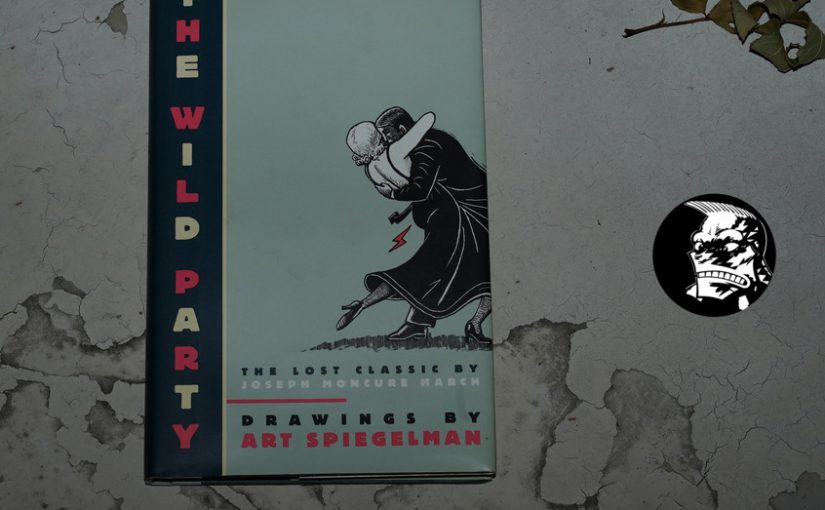 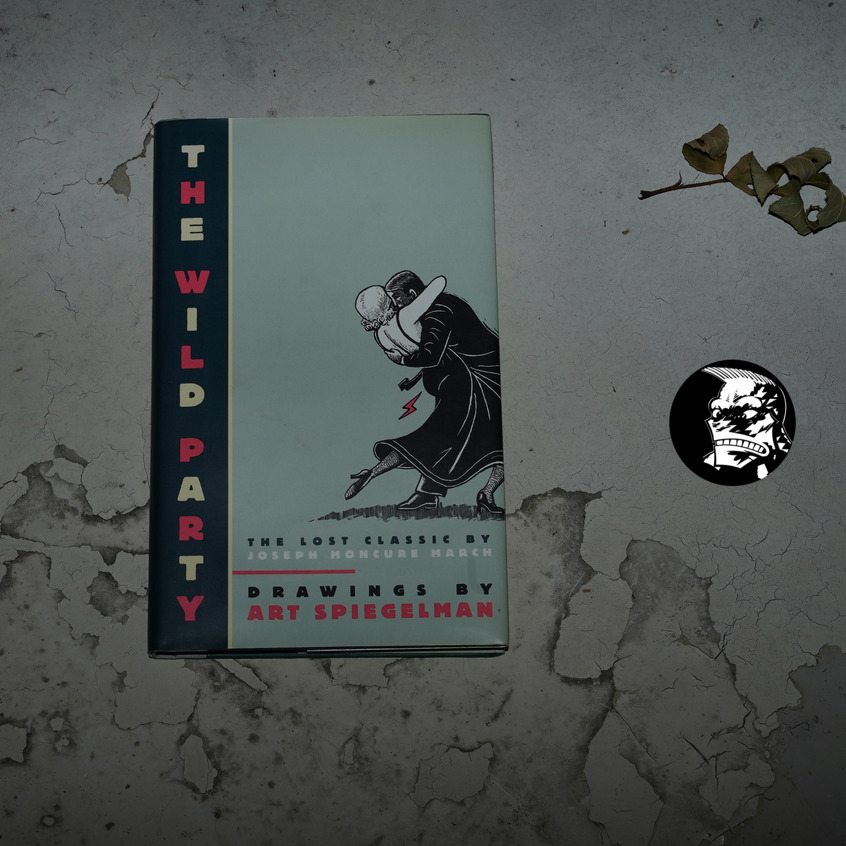 Note the sizes of the names of the two creators on the cover? Yes, indeed, this was published after the stunning commercial (and critical) success of Maus II. 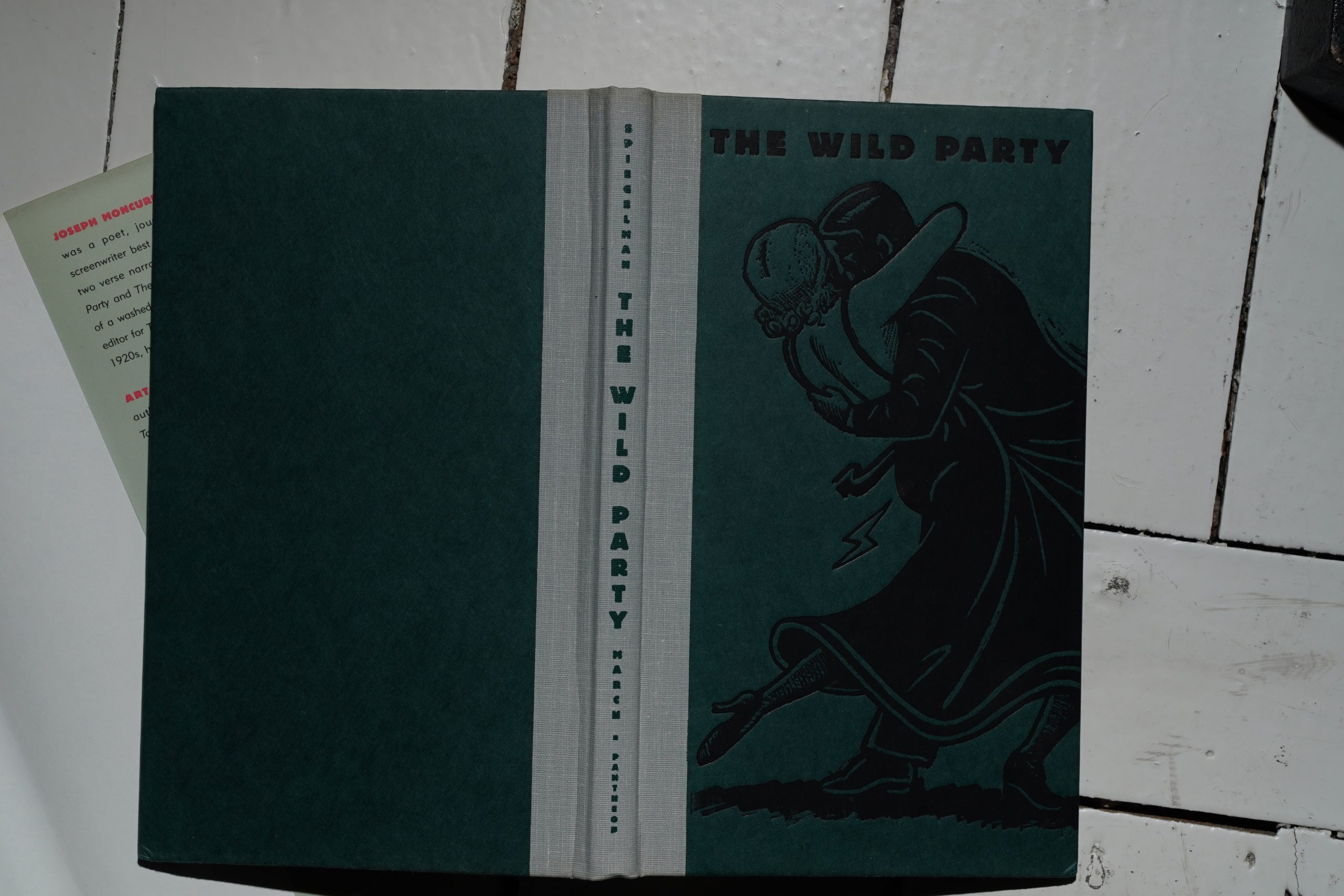 This is a very handsome object. It’s designed by Spiegelman himself, but it’s obviously gotten lot of attention from the people doing the production work, too (which seems to be R. Sikoryak). 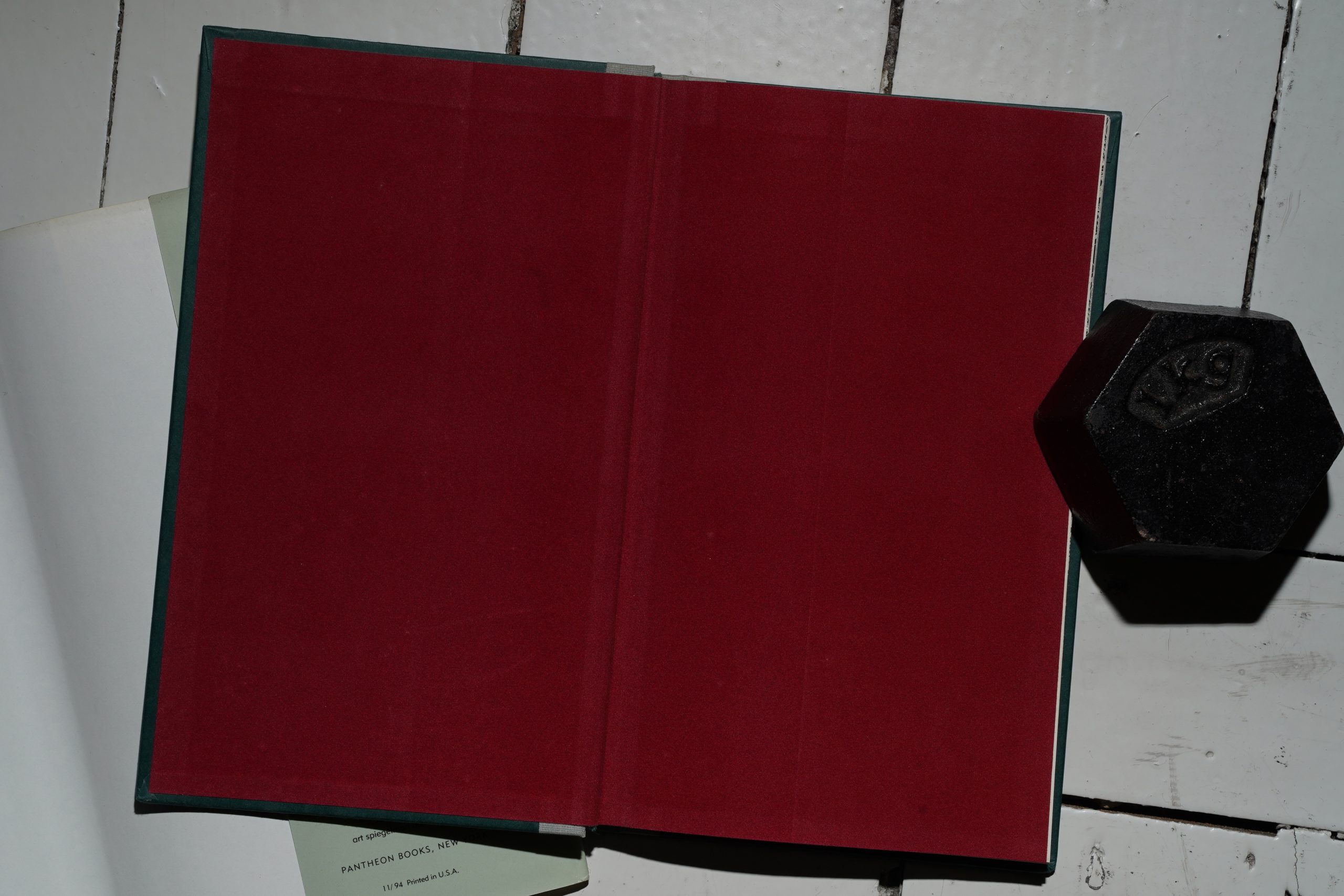 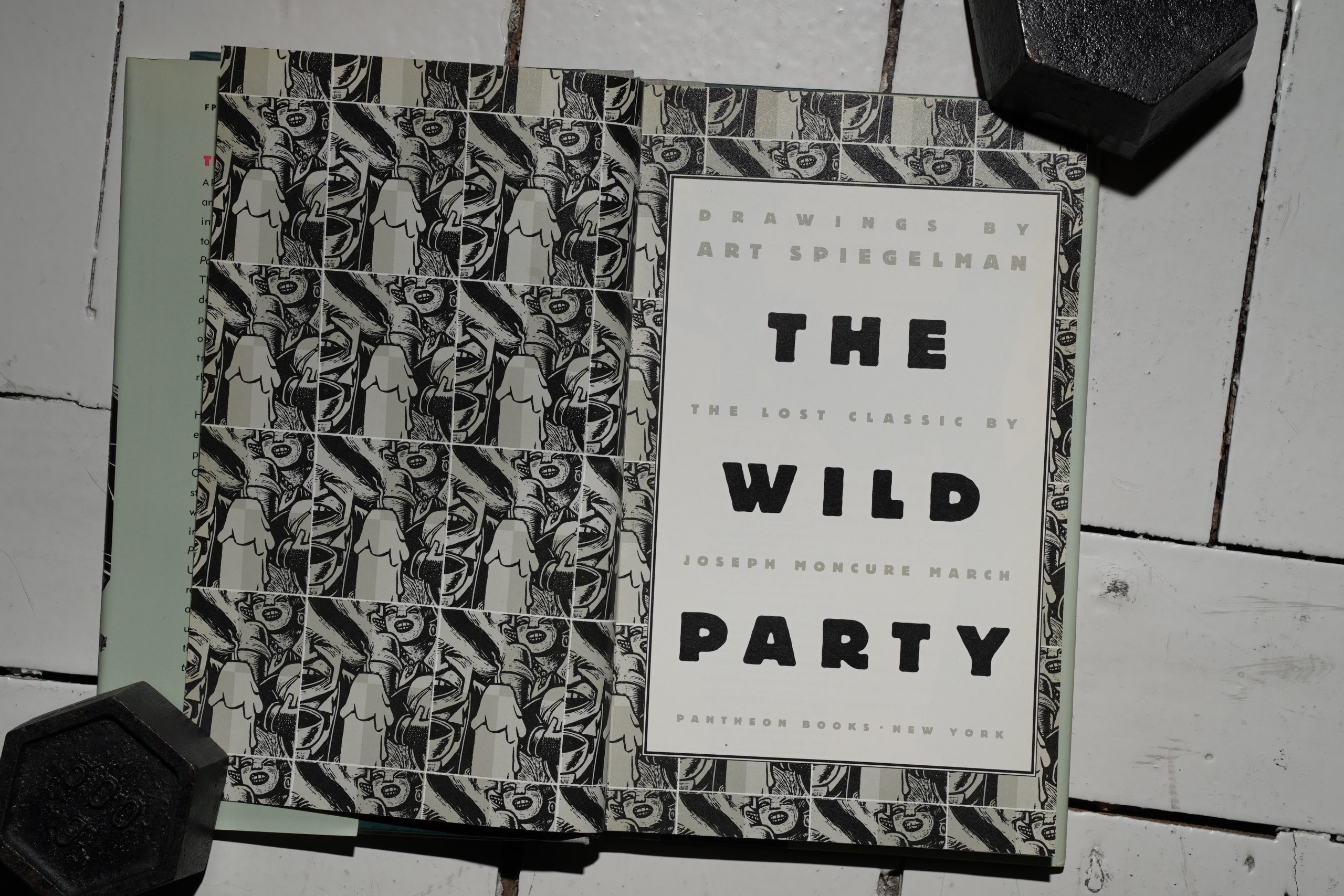 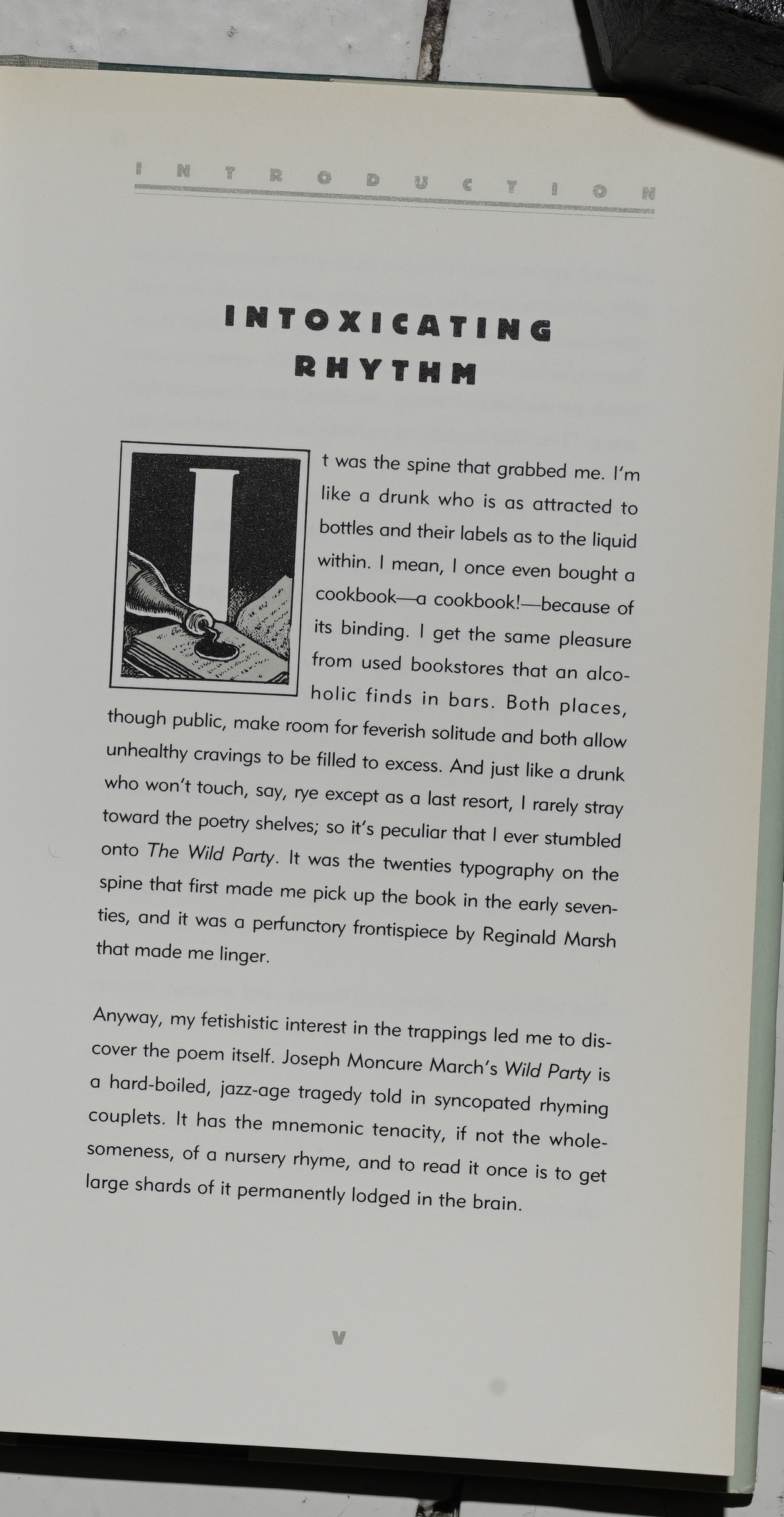 Spiegelman does a chatty introduction where he explains how he came to illustrate this narrative poem from the 1920. 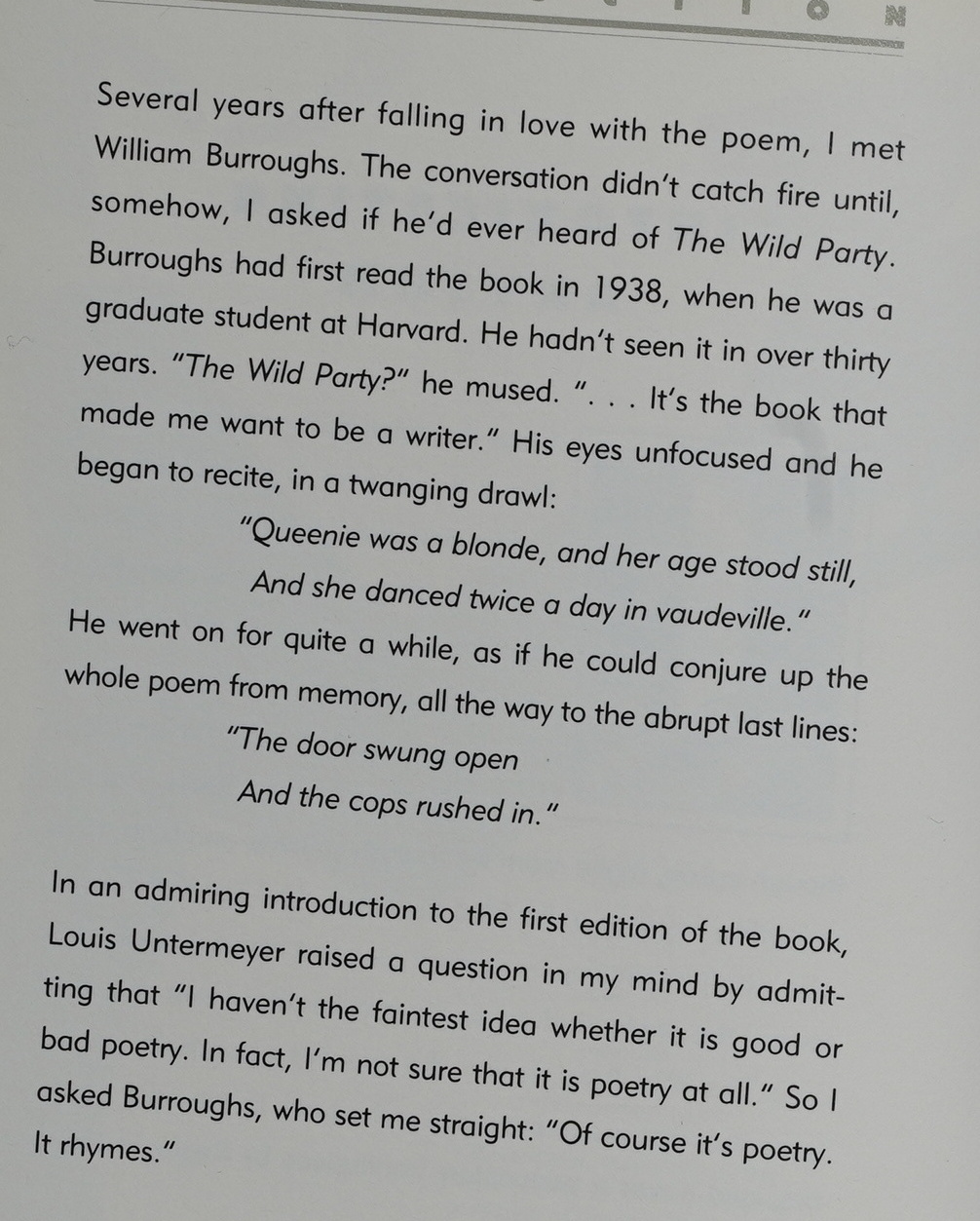 That Burroughs is a wise man. Or is that wise guy? I find it interesting that they found it necessary to equivocate about whether it’s good or bad poetry in the original introduction. Surely it can’t be that bad? 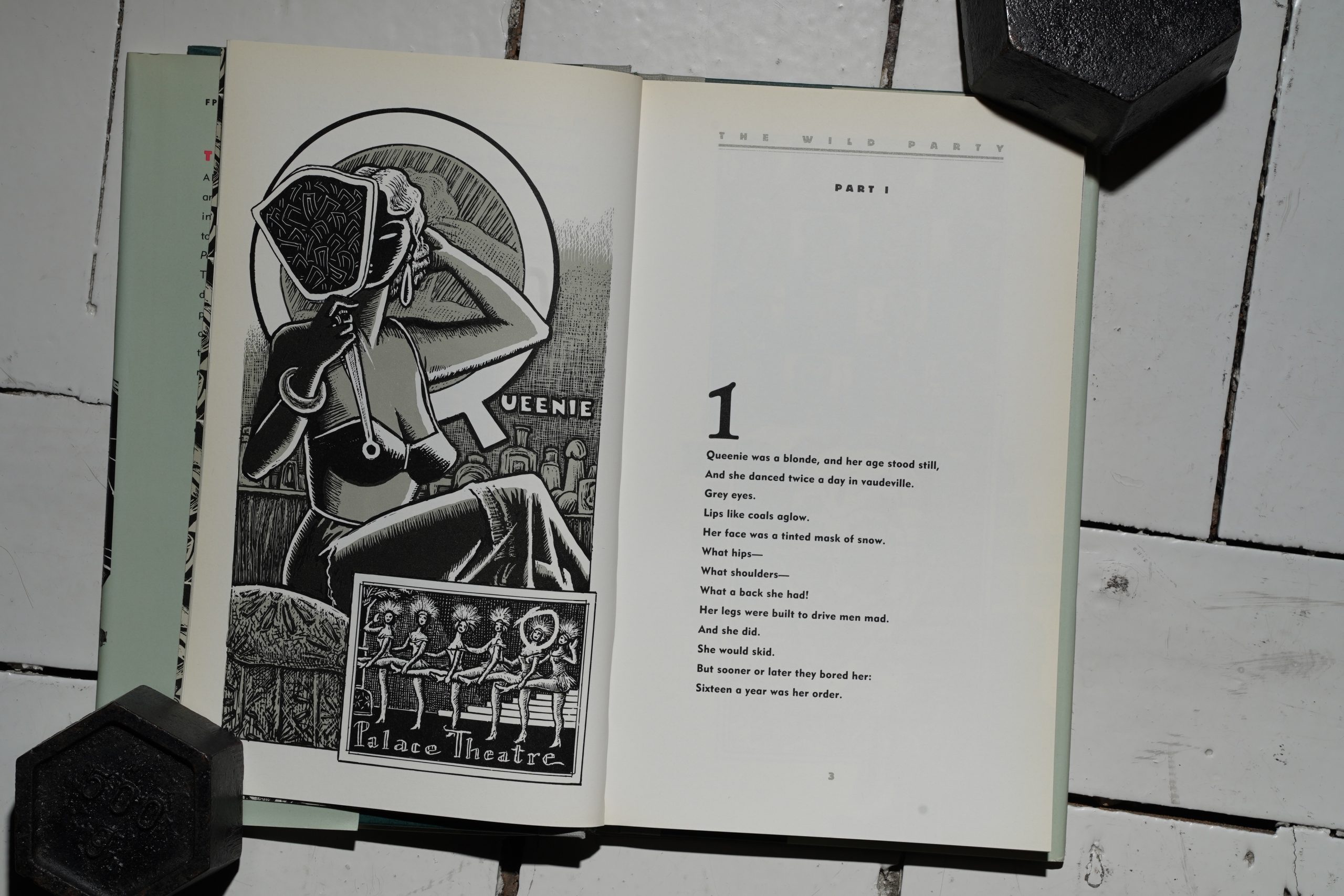 OH MY GOD IT”S THAT BAD 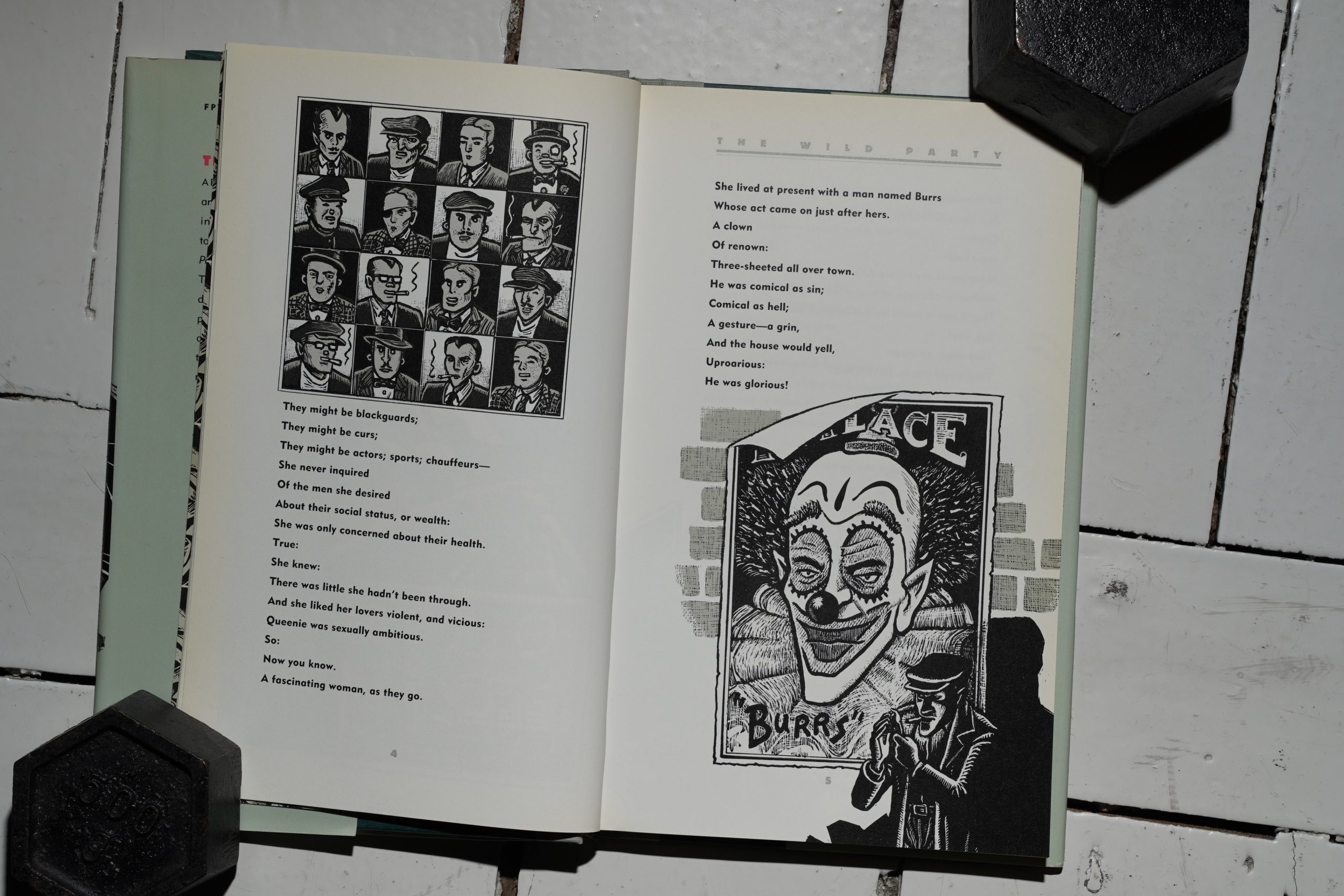 March tries to get stuff to rhyme, and he seems to succeed in about one third of the attempts, but it’s all forced rhyme, and there’s like no meter, no rhythm… it’s like he just chopped up some prose into uneven lines and pasted in some words with the vaguely the same endings here and there: It’s like a poem by somebody who’s never actually read one.

The book is printed with two inks: One traditional black ink, and one grey, slightly metallic (or at least somewhat reflective) ink. It looks really pretty. 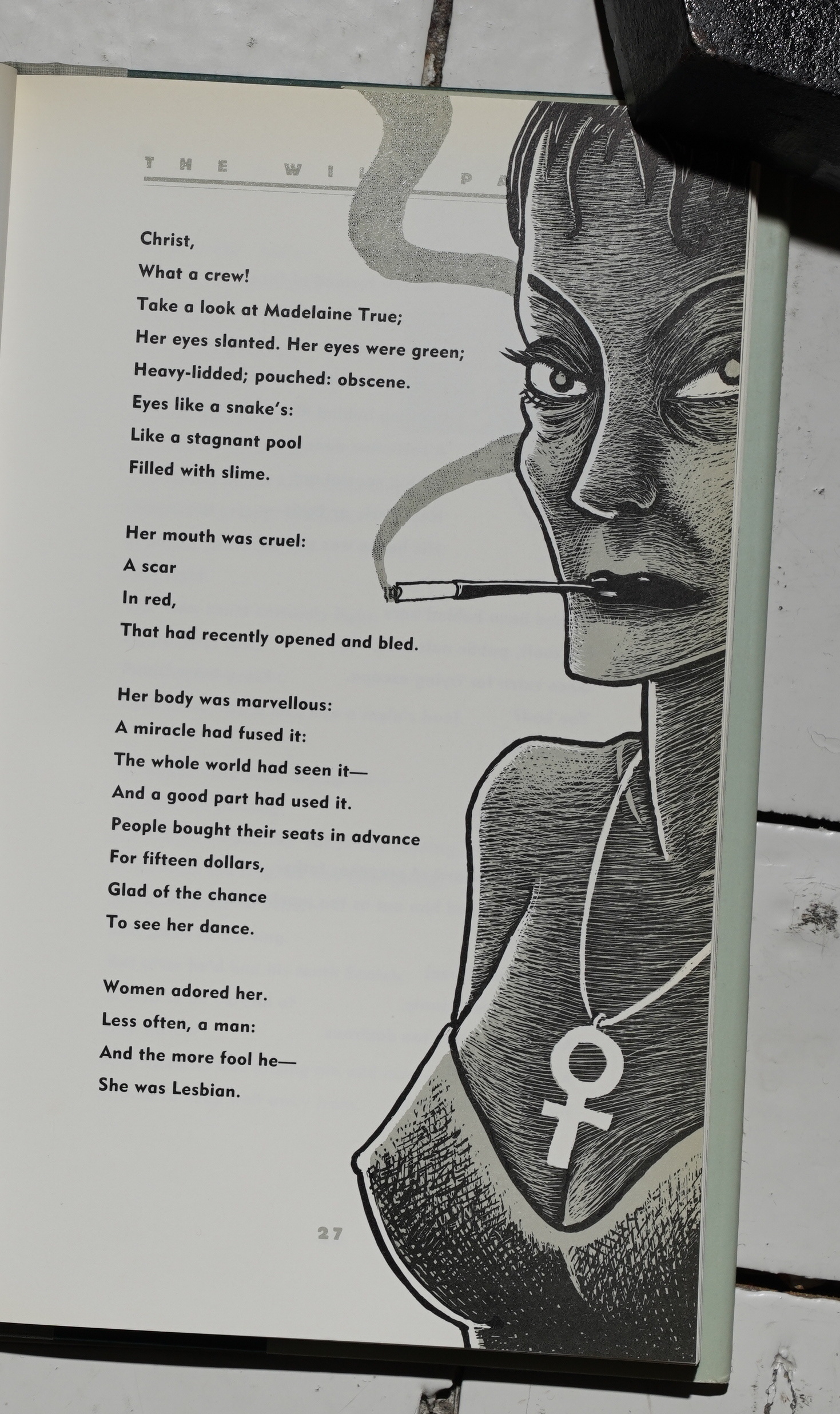 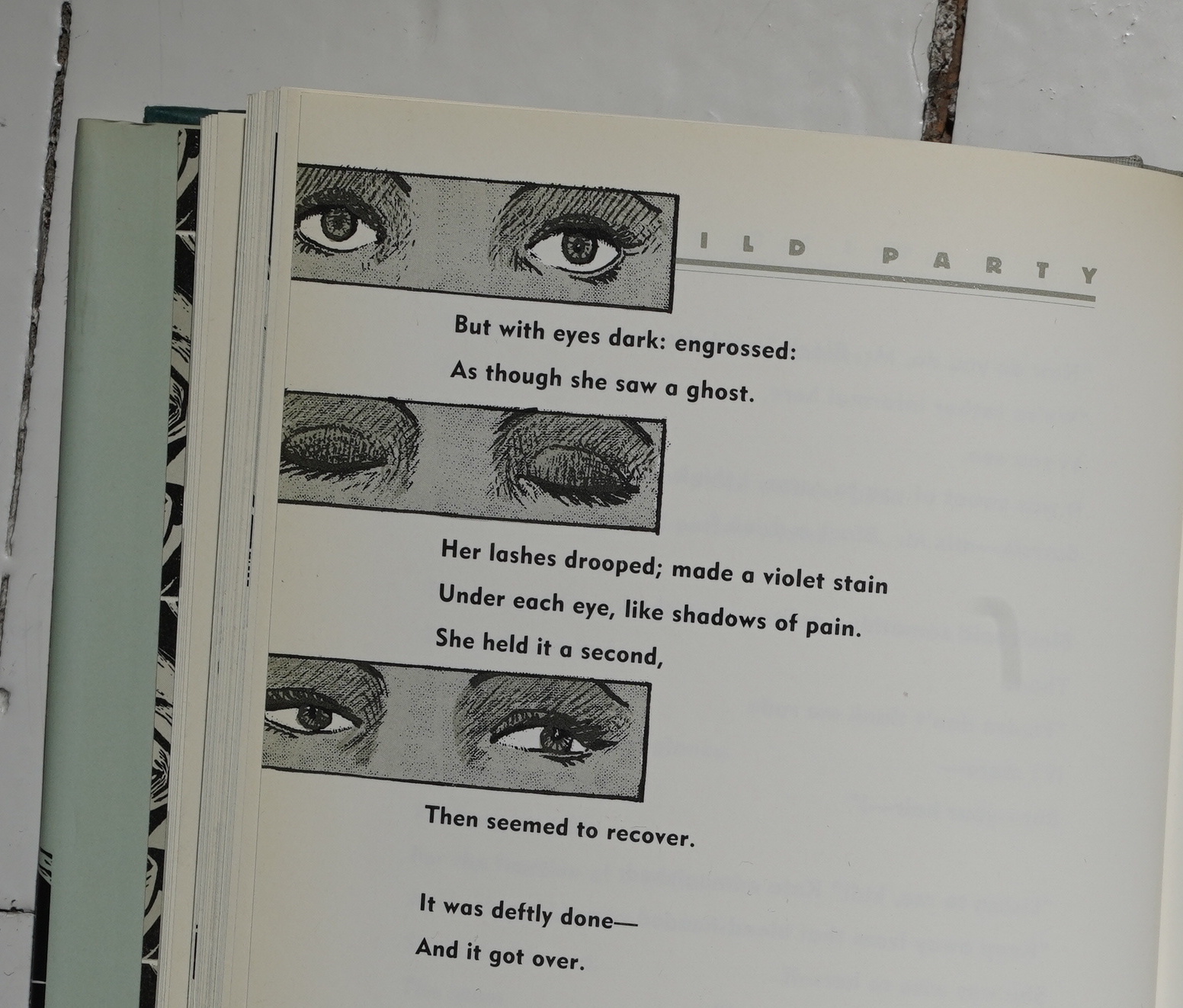 I wondered whether Spiegelman would mix in some comics here, but this is as close as it gets. 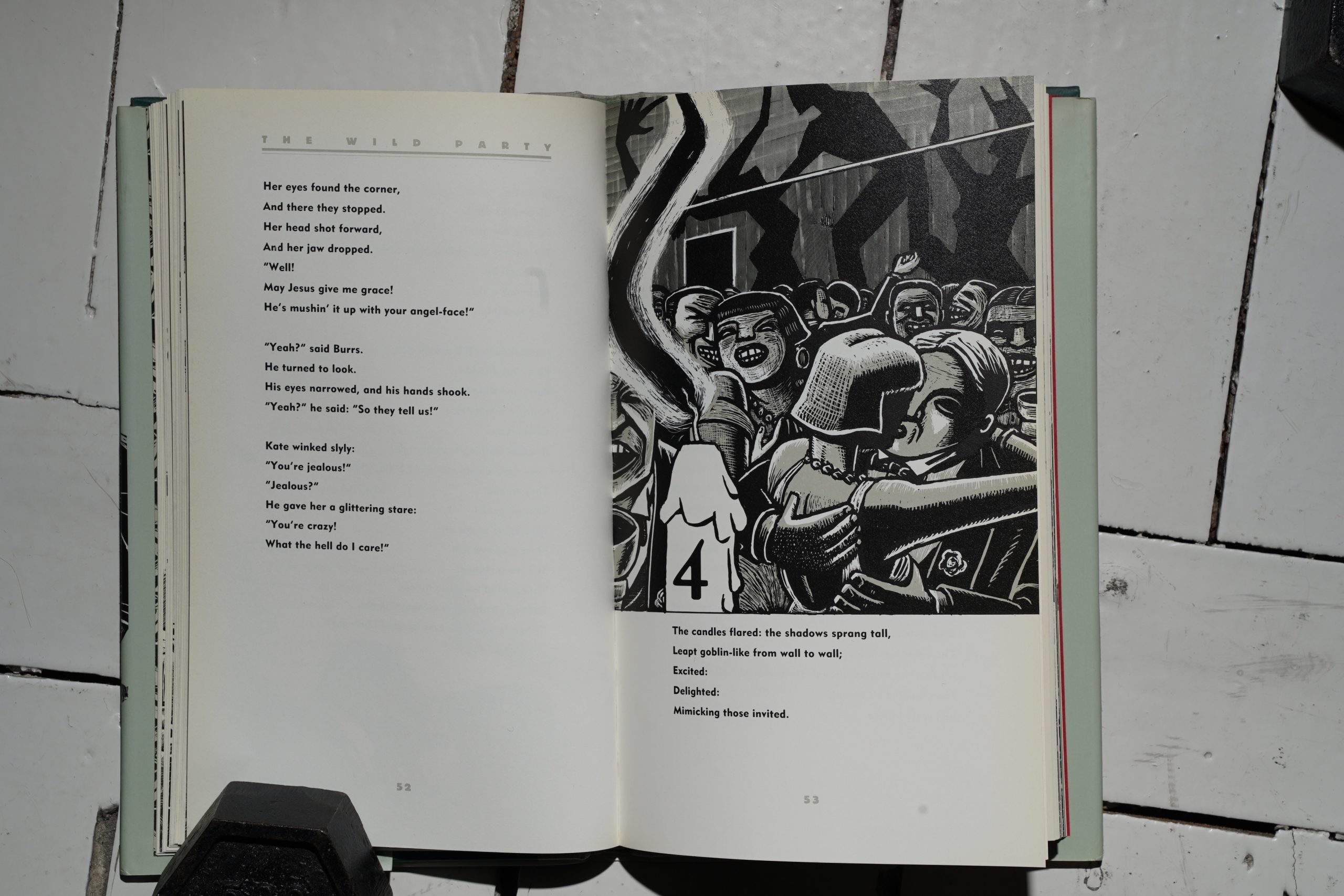 Spiegelman’s approach to doing these illustrations is basically to slavishly draw what the text is already telling us. That’s like the most annoying thing you can do in comics… but when doing illustrations, it’s not so bad?

The poetry’s awful, but the story it tells is pretty entertaining. I can see why they made a movie out of it.

But… it just barely rhymes here and there:

As you read on you wonder why rhymed verse has lost ground with modern poets. You understand why William Burroughs declared that this was the book that made him want to be a writer, quoting lines from memory long after he’d last read the book. You also see how Spiegelman’s fingers must have itched to draw some of the scenes evoked by the poem, and how March’s words plus Spiegelman’s drawings could bring ideas for song and dance numbers popping into a composer’s head.

More to the point:

But the poem works as a bouncy artifact, and the black-and-white illustrations are appropriately, viscerally graphic, summoning up the sense of a knockabout urban spree with debonair zeal and well-appointed crudeness.

Doggerel seems more to the point:

His mouth and his throat were foul cotton.
God, he felt rotten!

Greil Marcus gets it right:

The Wild Party is “The Cremation of Sam McGee” without rhythm, and what’s doggerel without a beat? “Of course it’s poetry,” Burroughs told Spiegelman, “it rhymes.” The judgment may suggest why Burroughs is not celebrated for his poetry. The very first lines of The Wild Party set the tone, and they rhyme—“Queenie was a blonde, and her age stood still / And she danced twice a day in vaudeville”—as long as you don’t mind a trip-stumble-and-fall on the last word to complete the meter: “vau-de-ville.”

Perhaps it’s the weakness of March’s language that keeps Spiegelman from finding his own visual language. He shifts from hard-guy Keystone Cops pies to note-for-note depictions of faces to scenes that seem like unintentional parodies of the action to tight close-ups of mouths to repeating images—as if he most of all wanted to keep up with March’s busyness.

Spiegelman says that “the twenty-six-year-old March improvised the poem, a few lines a day.” I don’t know how else you write a poem, but if a few lines on the order of “Always in vogue; / Vicious, / Capricious: / A rogue— / But her manner was gay, and delicious” was a day’s work, or play, March must have been too drunk or too bored to stay conscious.

This is not a big deal. The Wild Party is junk and Spiegelman’s drawings are a fan’s tribute. When his own story next appears to him he’ll rise to meet it.