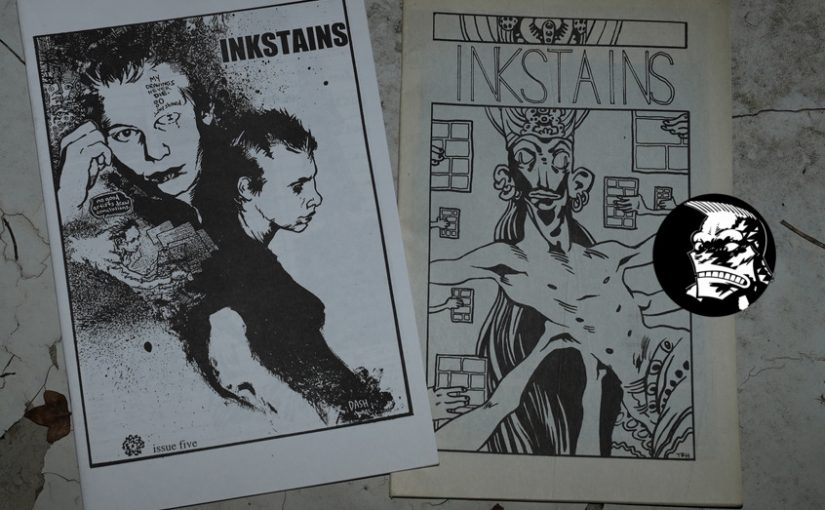 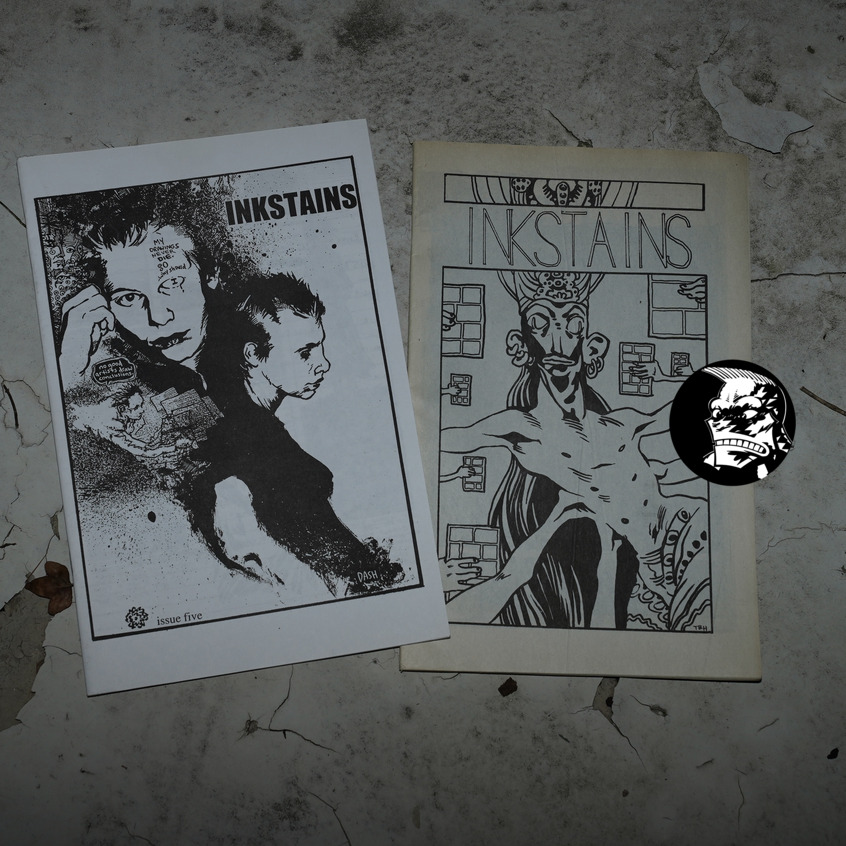 Since so many of the artists I’ve covered in this blog series have been at the School of Visual Arts (and I’ve talked about the Bad News anthology here, here, and here, which was done by students and teachers at the SVA), I thought it might be fun to have a look at some of the more recent student publications coming out of that school. Well… er… “recent”: These are almost twenty years old, so…

They apparently do a yearly portfolio, but that’s for the illustrators — Inkstains seems to be more for the people on the comics side of things. And there doesn’t seem to have been a comics anthology for quite a while. 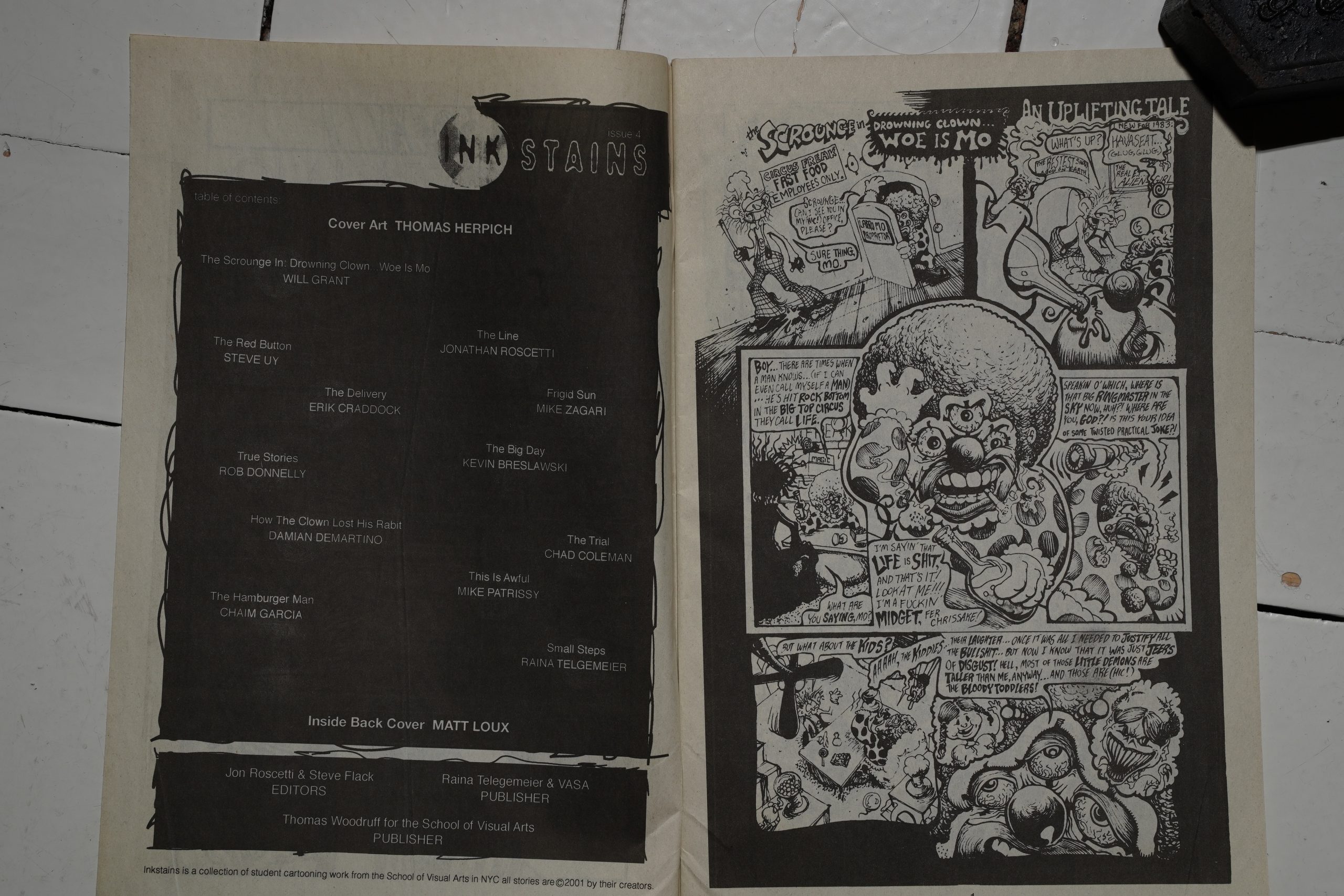 These were presumably comics that were just handed out to people? But gives the students a chance to see their work in print. 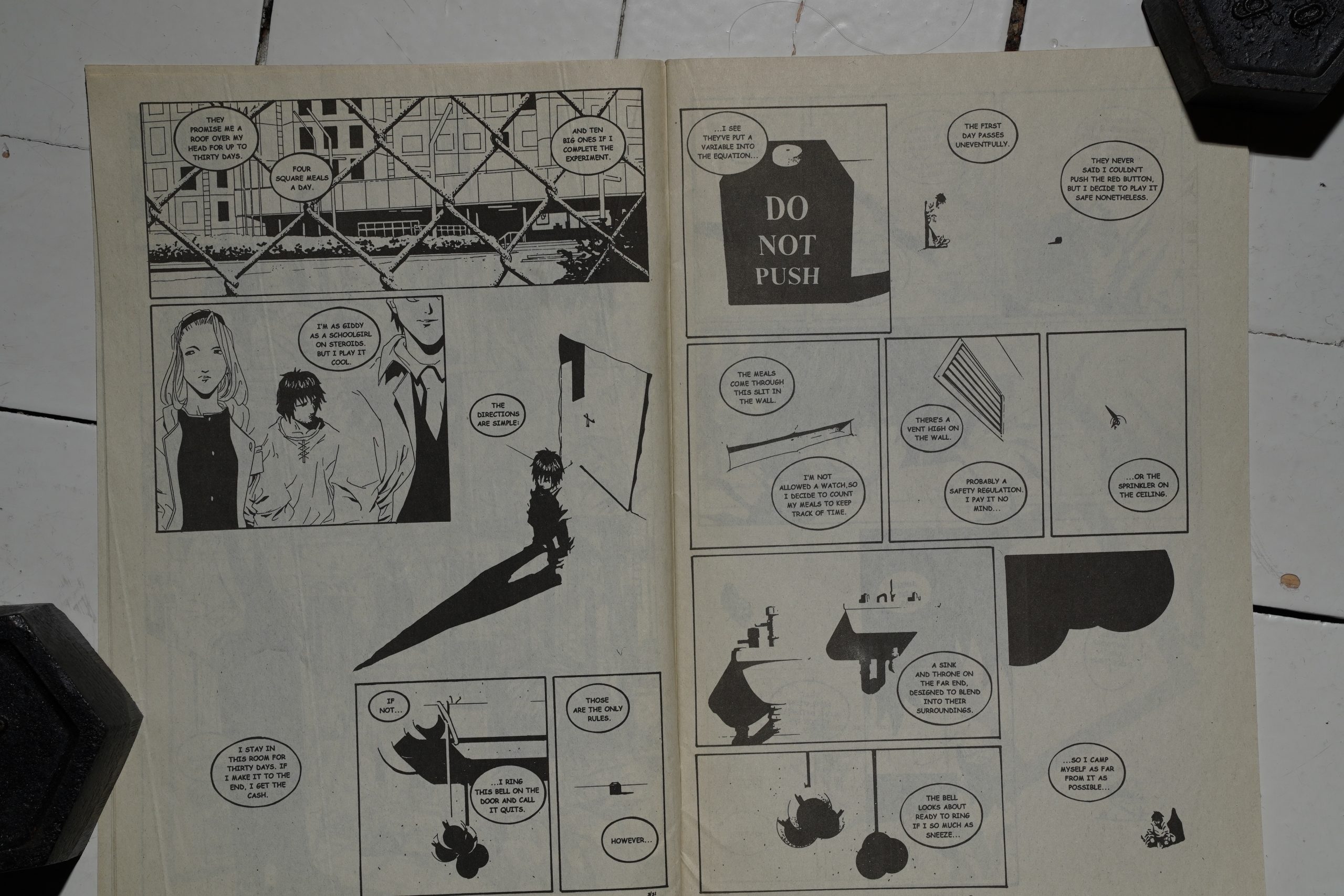 The work is, indeed, studentey, but with a wide variety of approaches (Stevey Uy.) 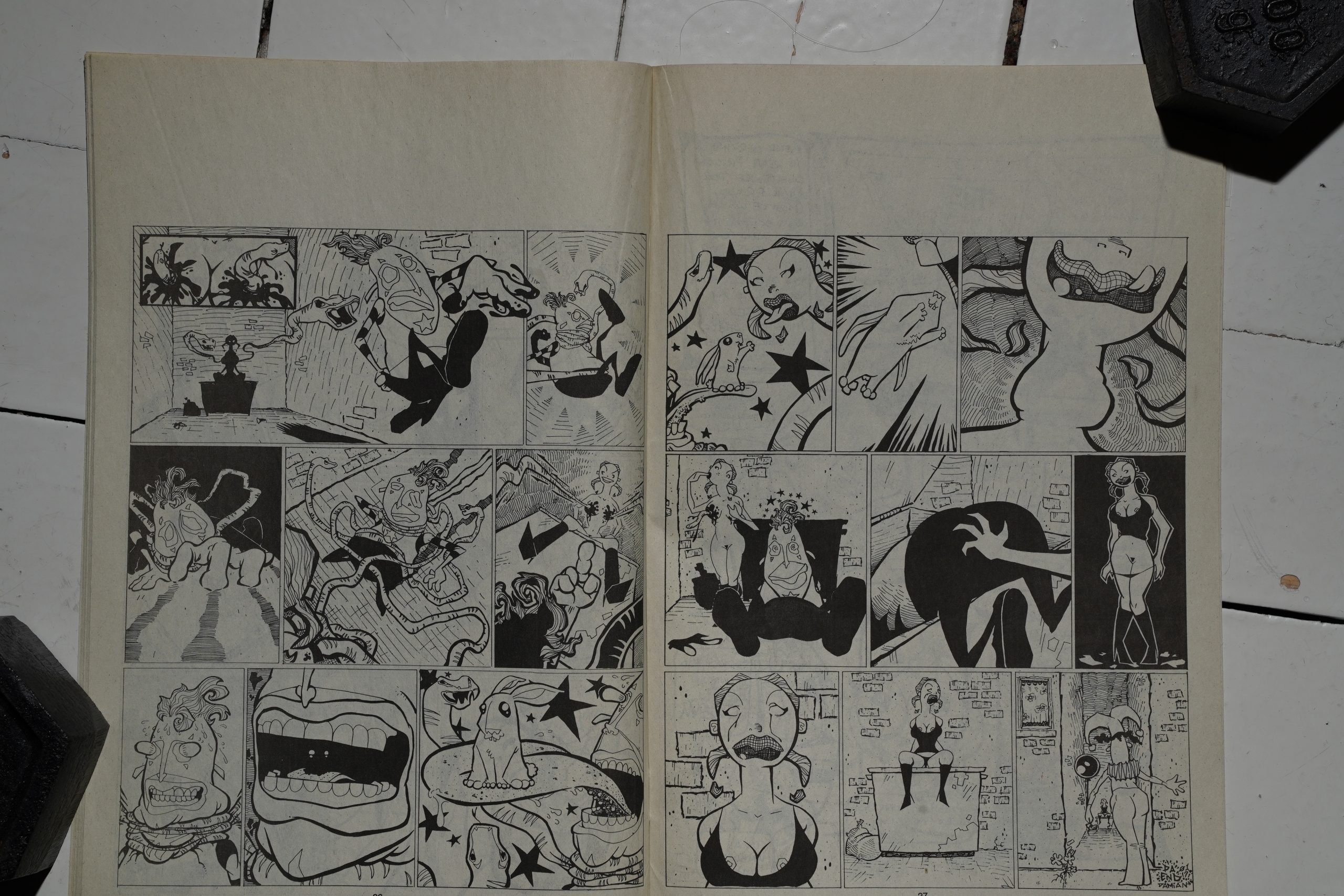 None of these seem to be, like, class assignments — “do a strip featuring this theme using that style”, but are instead just… er… stuff? (Damian Demartino.) 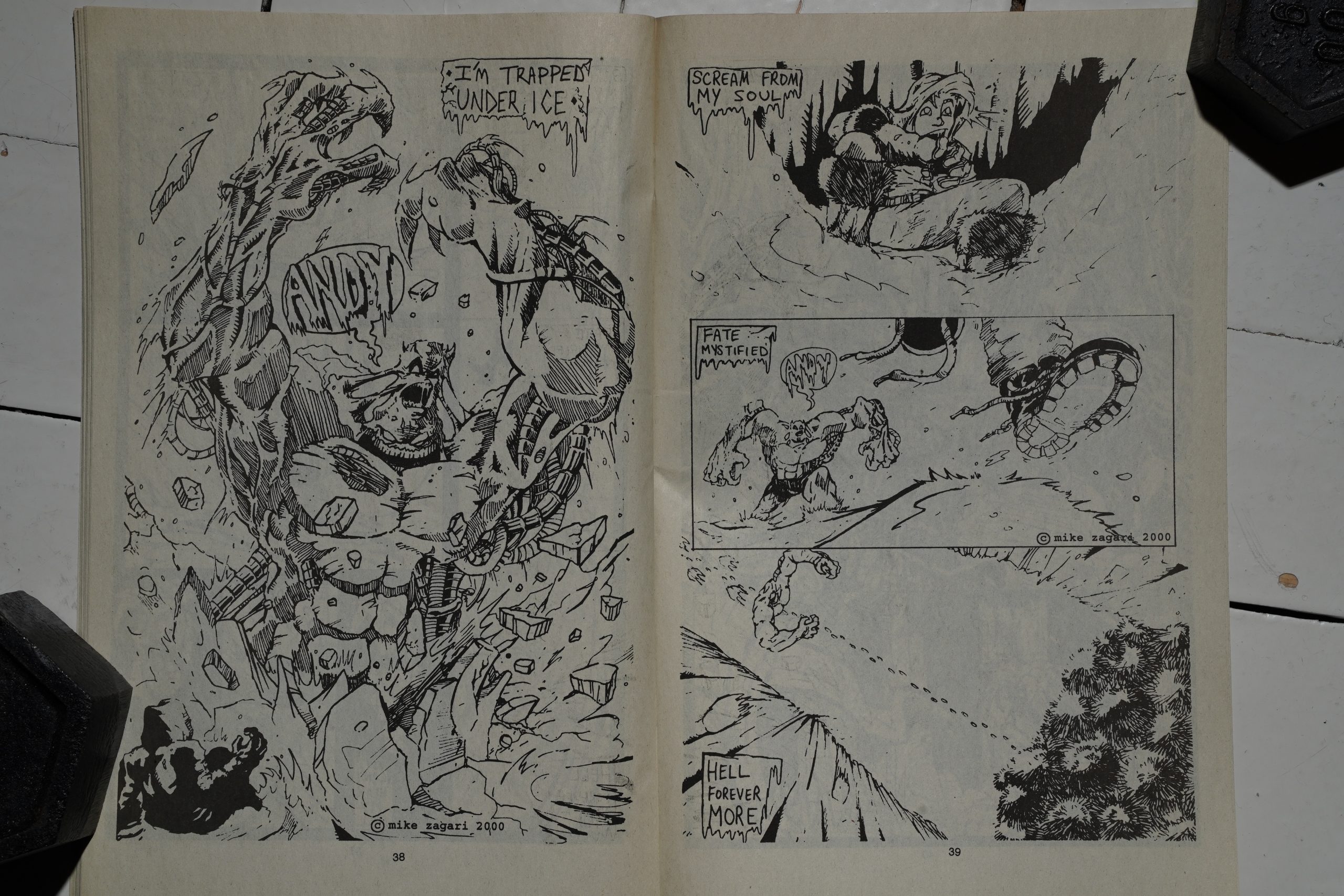 And here we have somebody illustrating the lyrics from a Metallica song, as you do at that age. (Mike Zagari.) 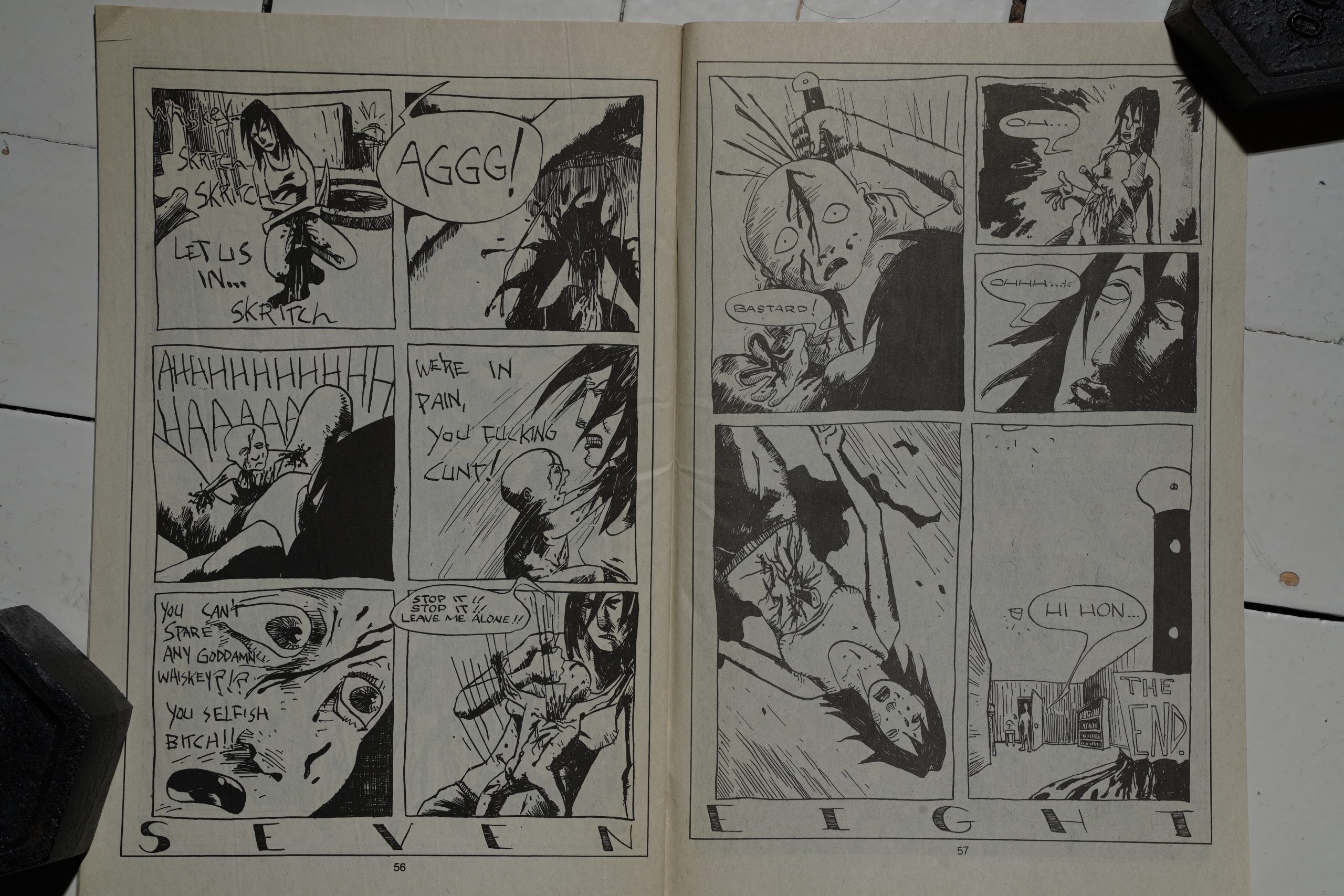 Many of the artists here have got a quite distinctive style, but the stories leave something to be desired (Mike Patrissy.) 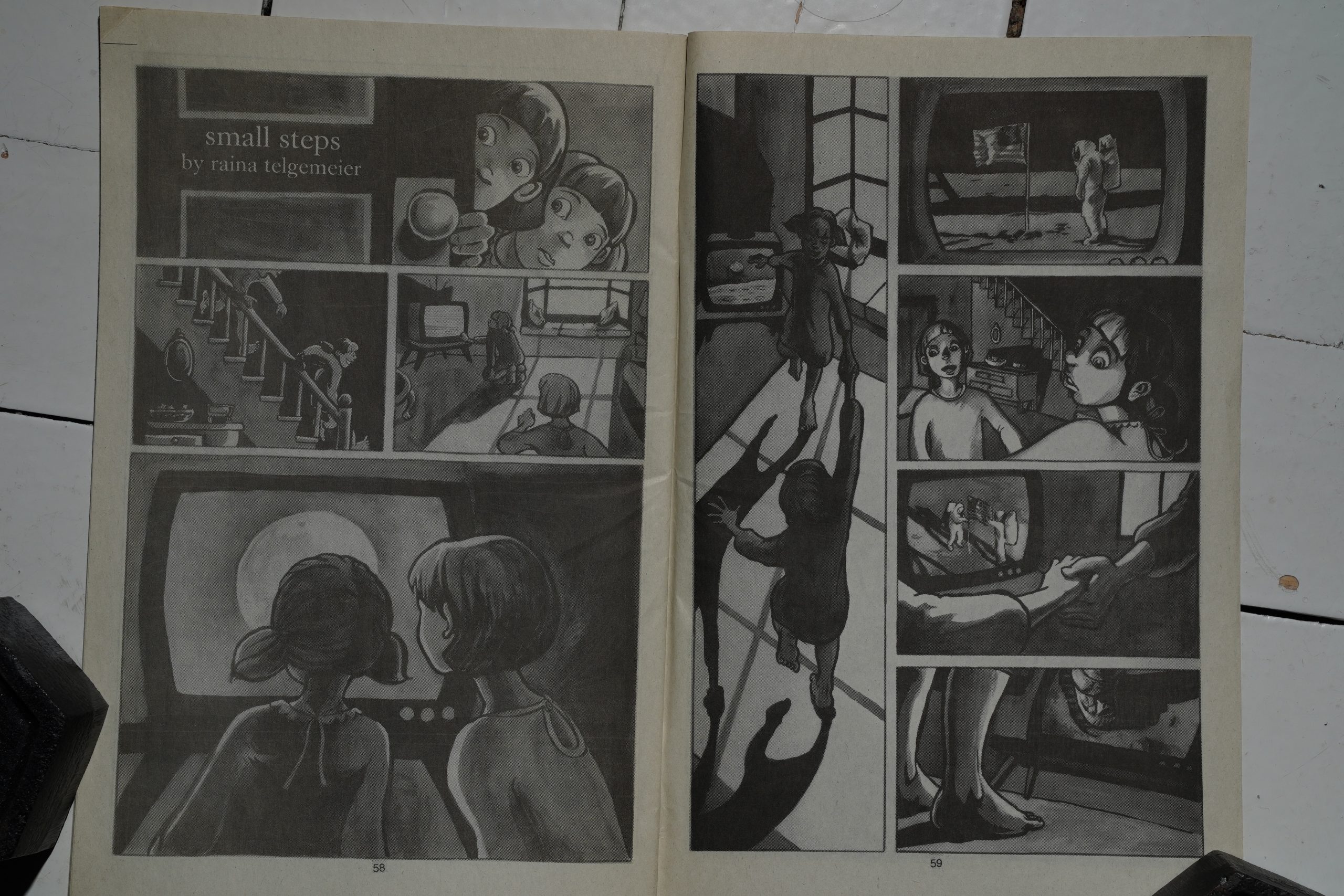 Aaaand… Raina Telgemeier (who’s also listed as the co-publisher and co-editor). Whatever happened to her, eh? Eh? 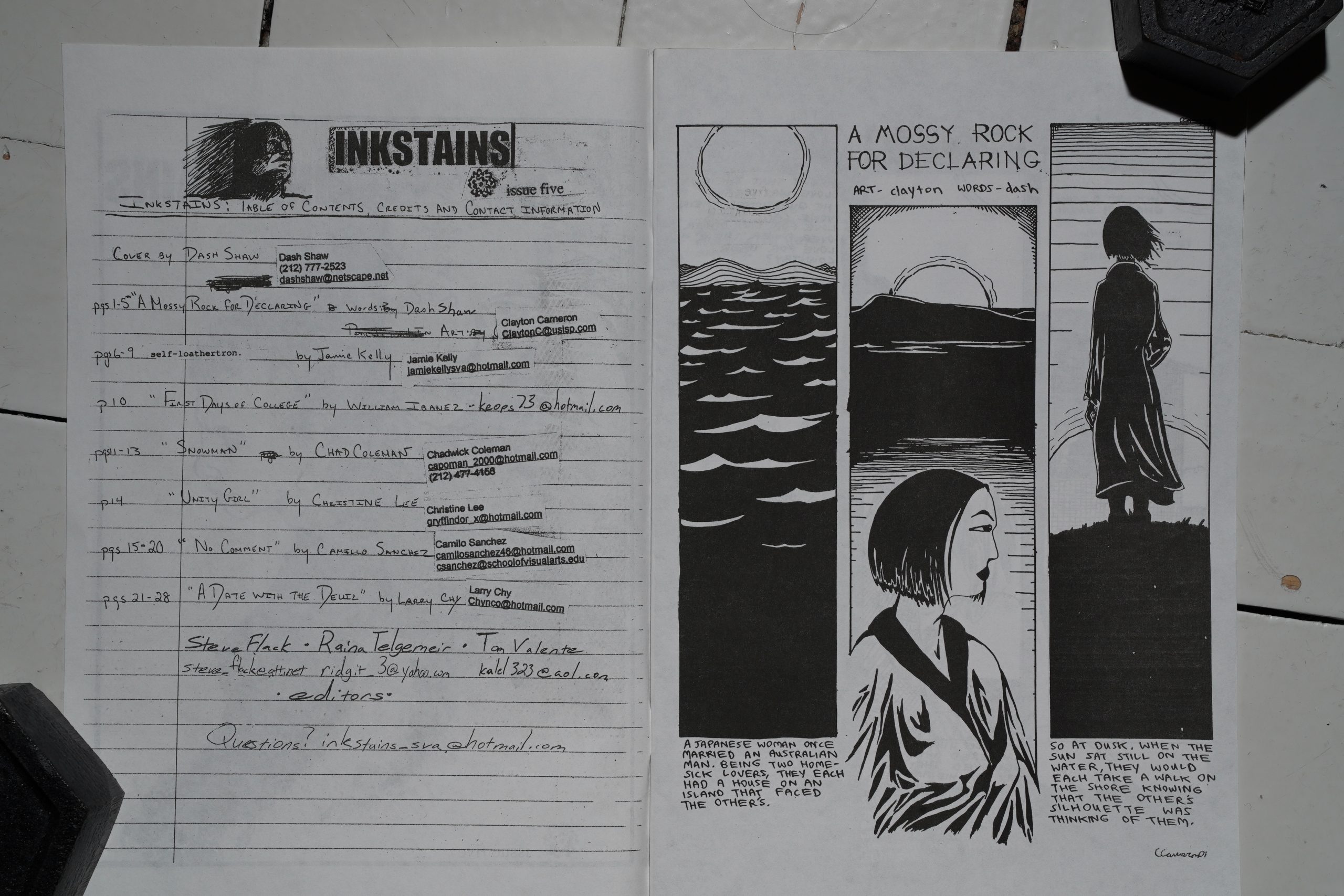 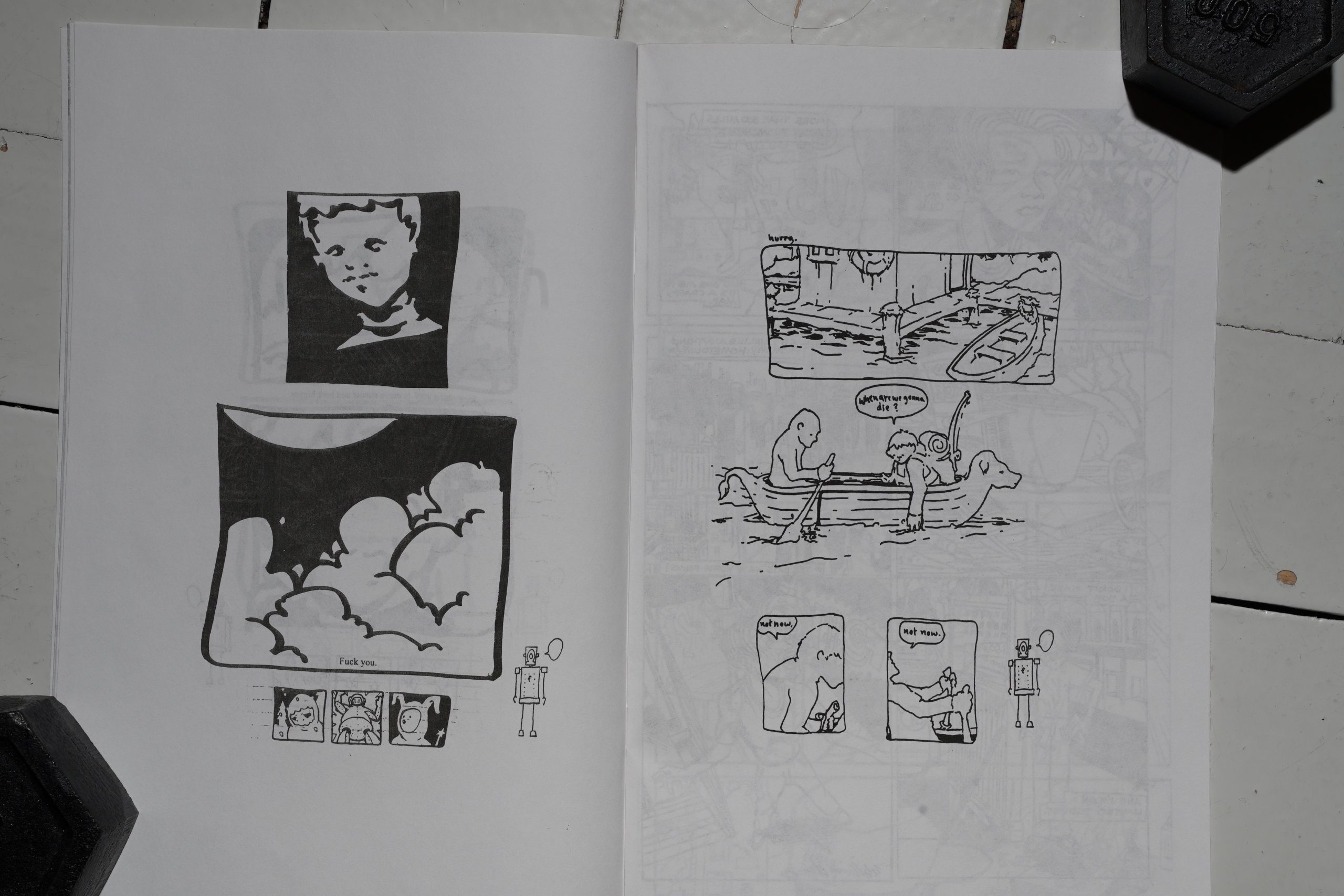 It’s not that the rest is without interest… (Jamie Kelly.) 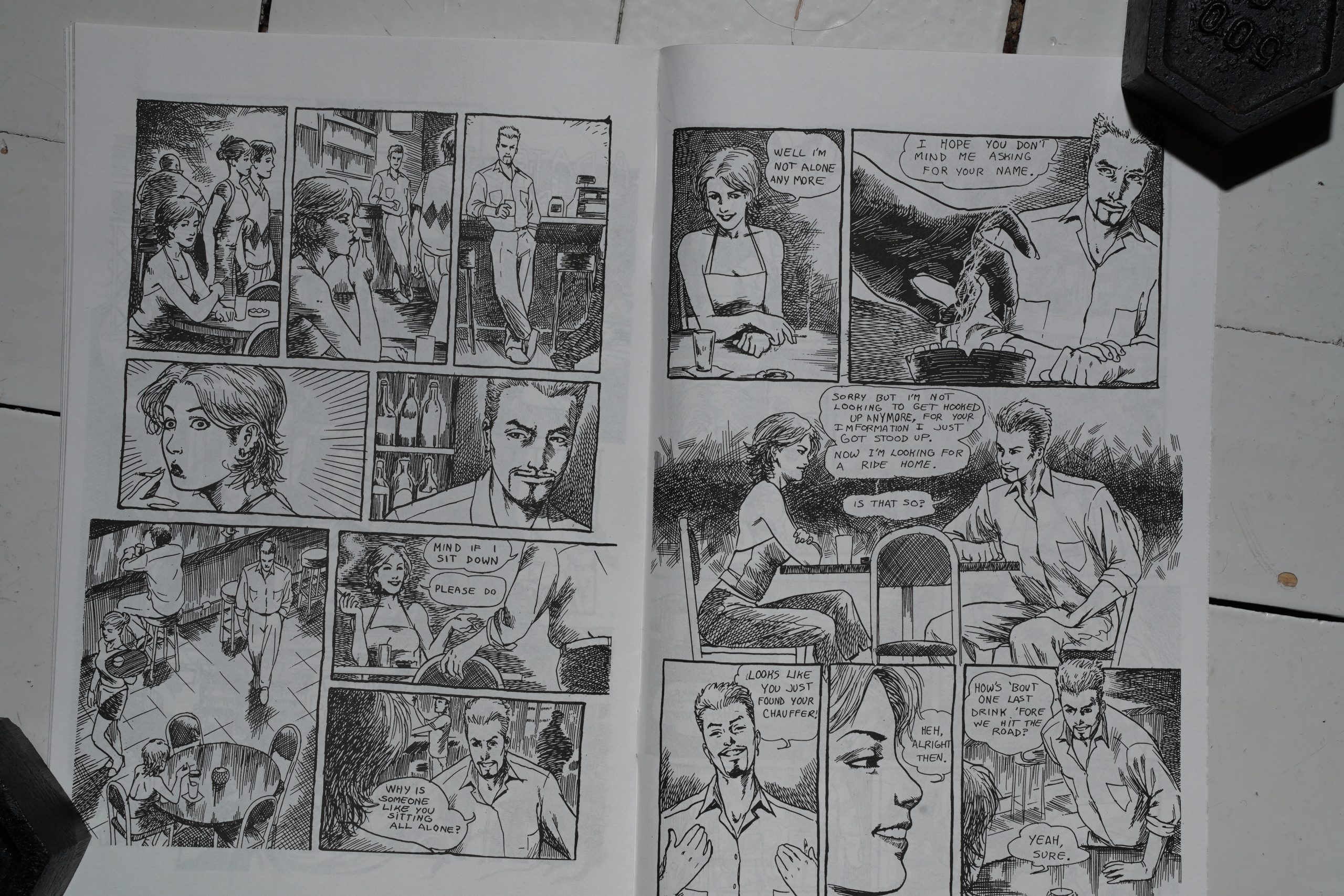 But… nothing seems to go anywhere interesting. (Larry Chy.)

But then again, it’s student work, so… 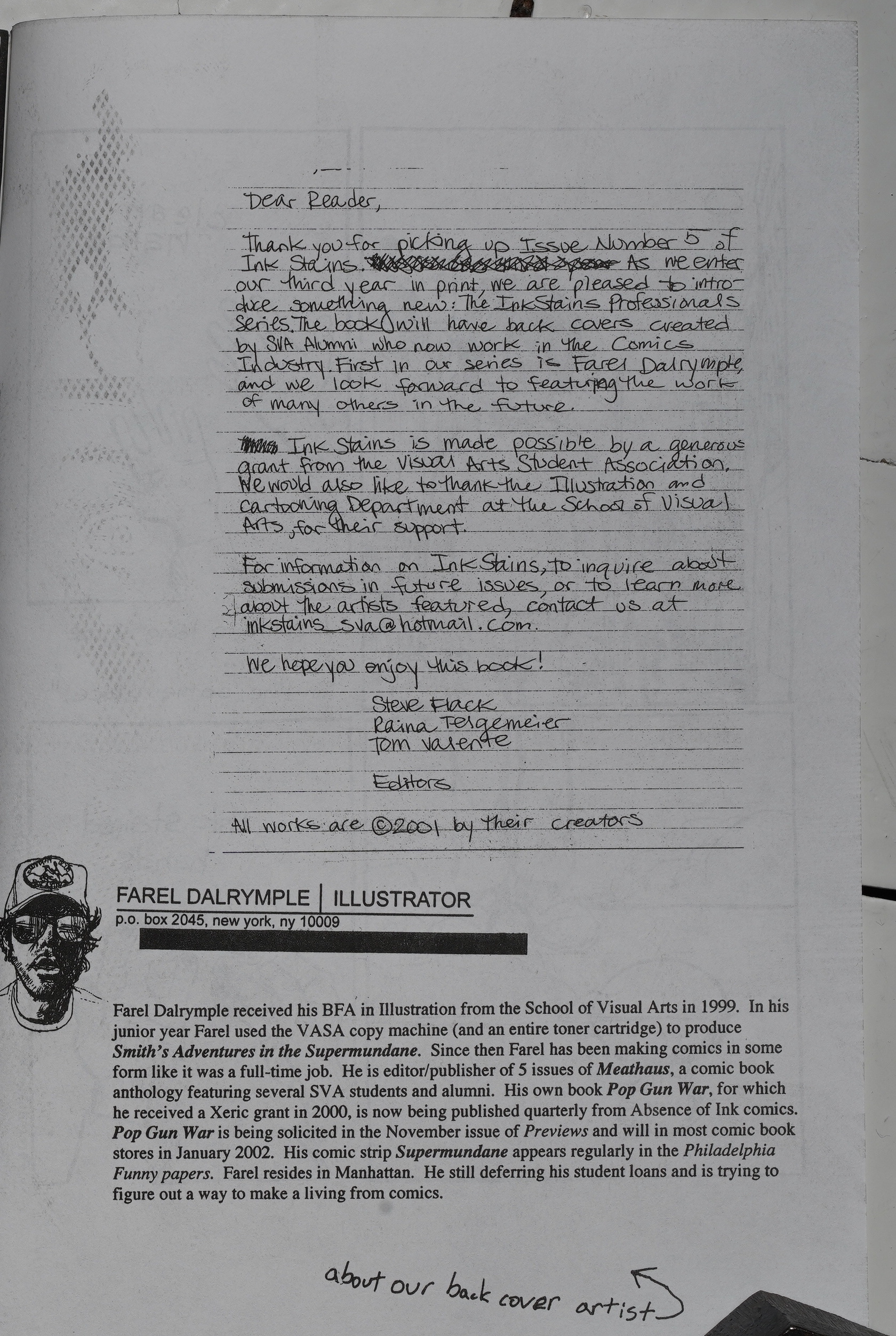 So it’s financed by the Visual Arts Student Association? That makes sense, I guess. 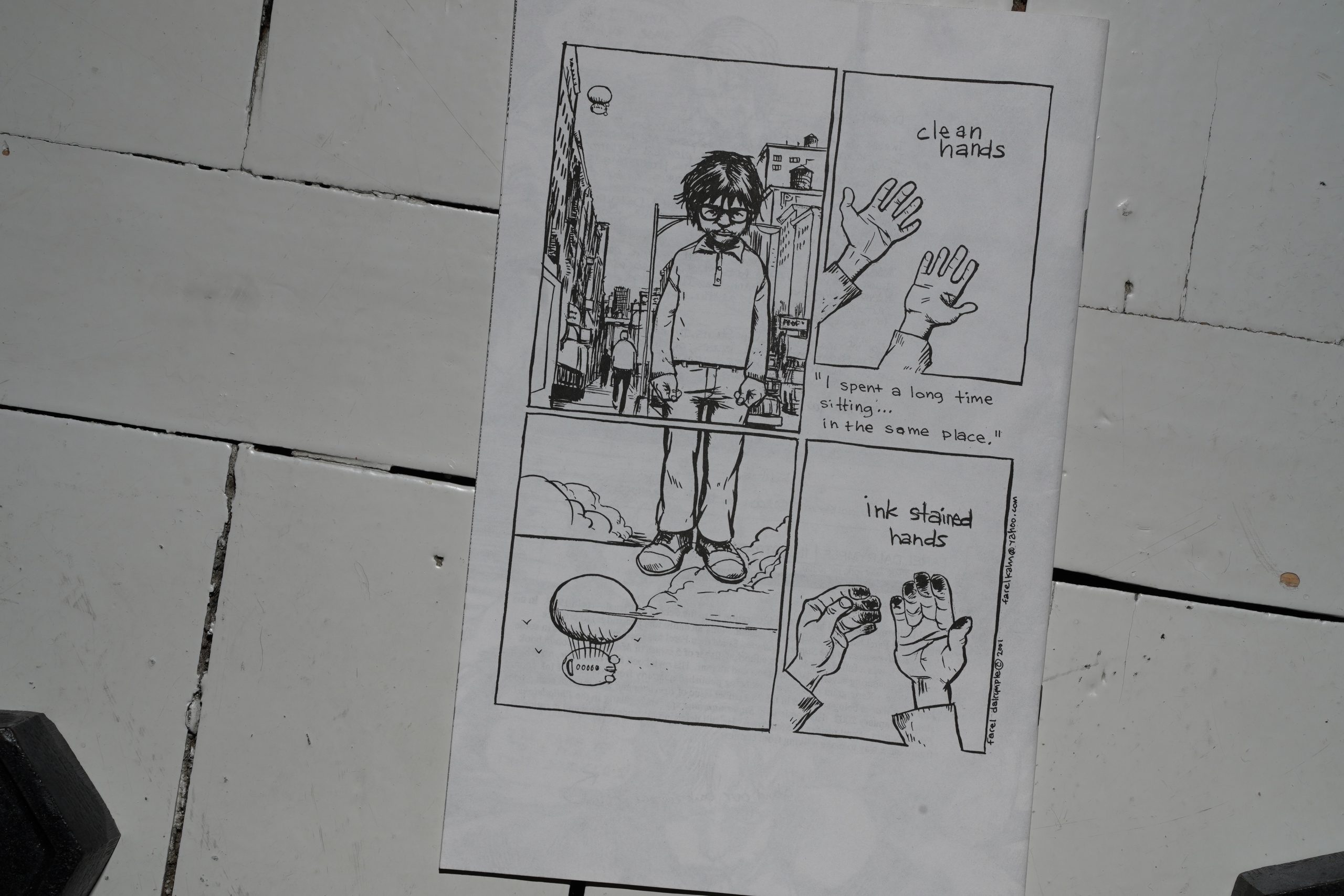 And then Faryl Dalrymple does the back cover.

I’m not sure what I expected here, but it does seem like the offerings here are much more… commercial… than I thought they would be? And nobody here really seemed to have anything to say.

They had to draw something, but were unwilling (or unable) to put anything personal into any of the pieces. I had expected some autobio or whatever, but instead it’s Metallica lyrics and O. Henry stories about devils and murder.