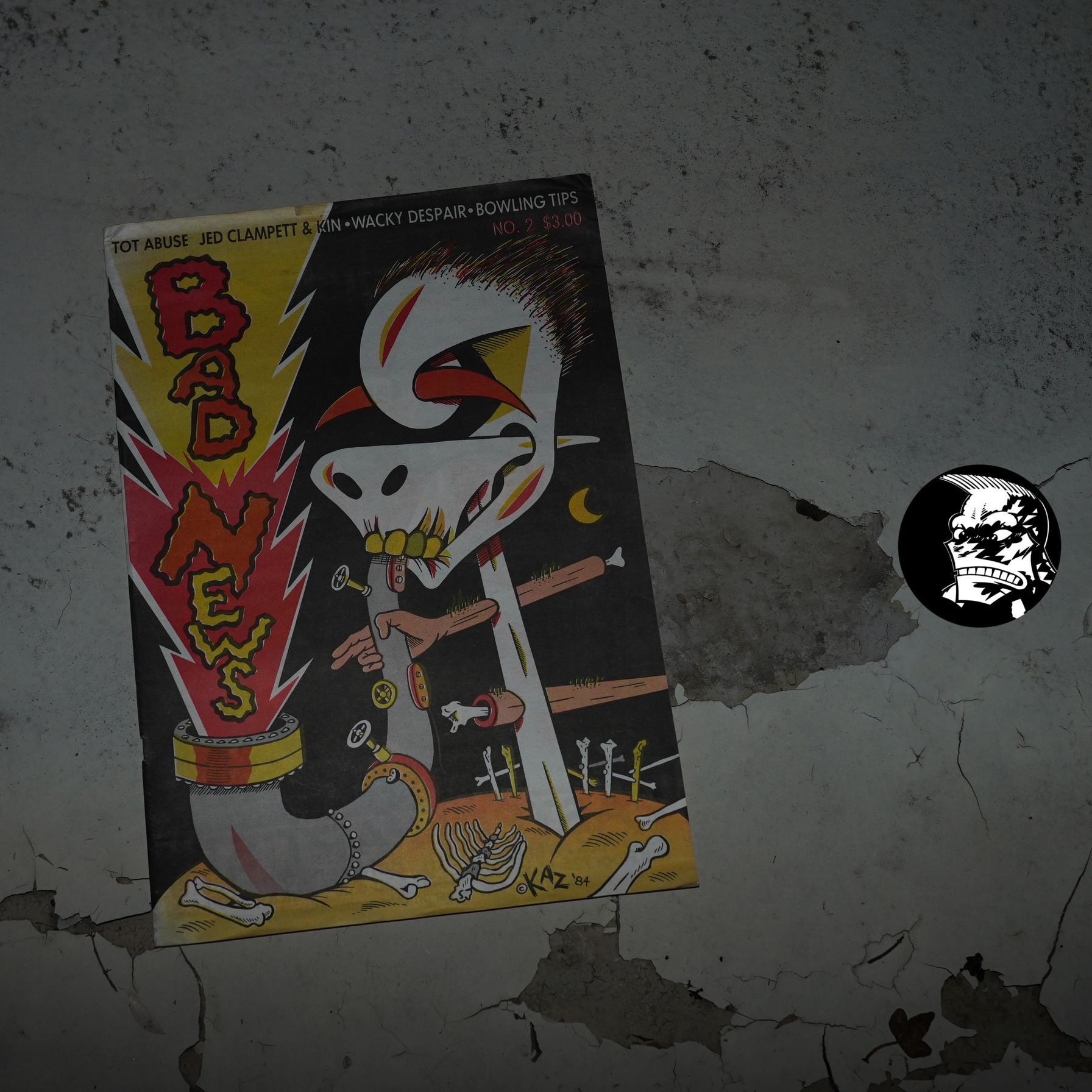 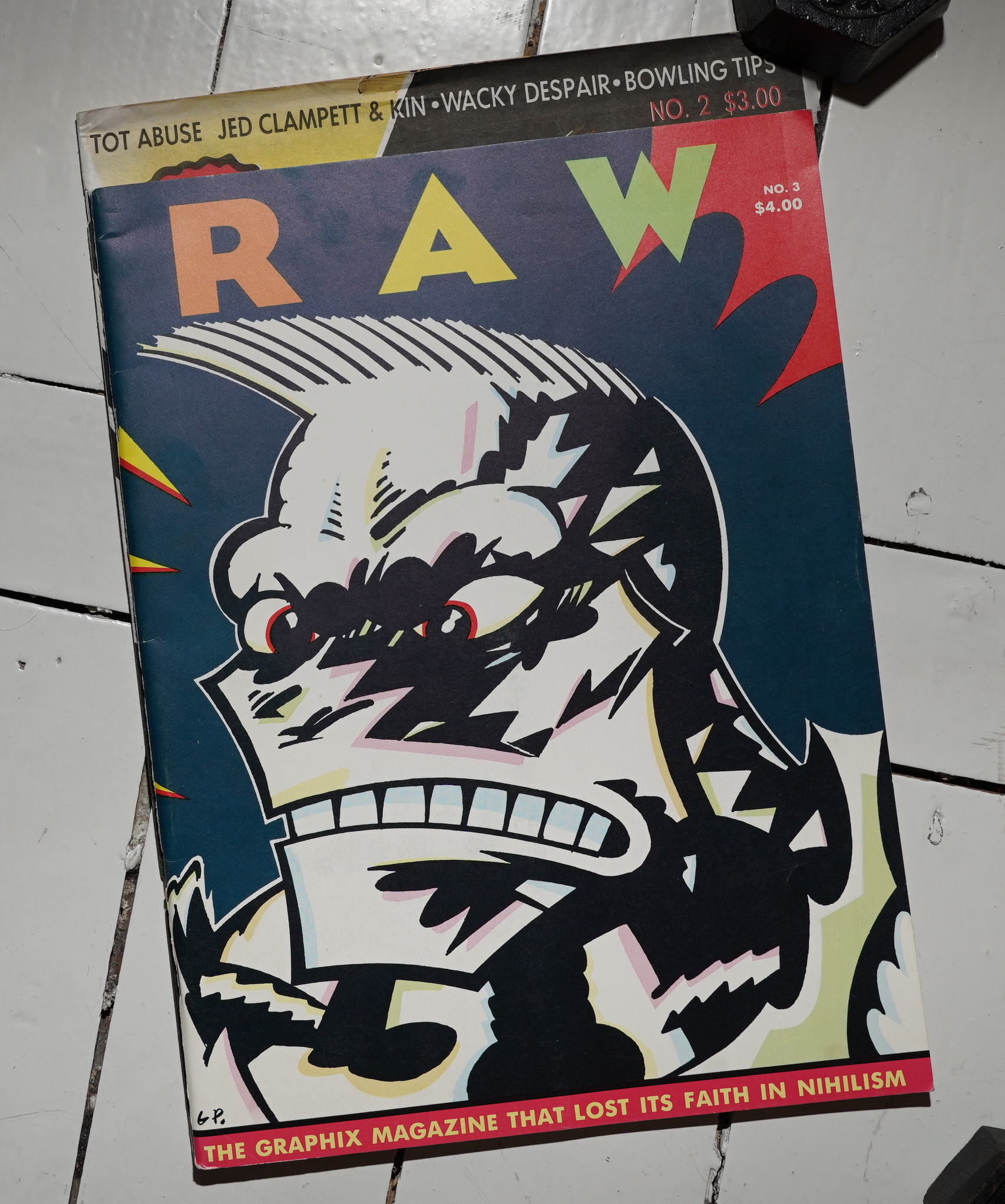 It’s in a similar format to Raw, but is a bit taller, which I guess means that it’s in tabloid format? 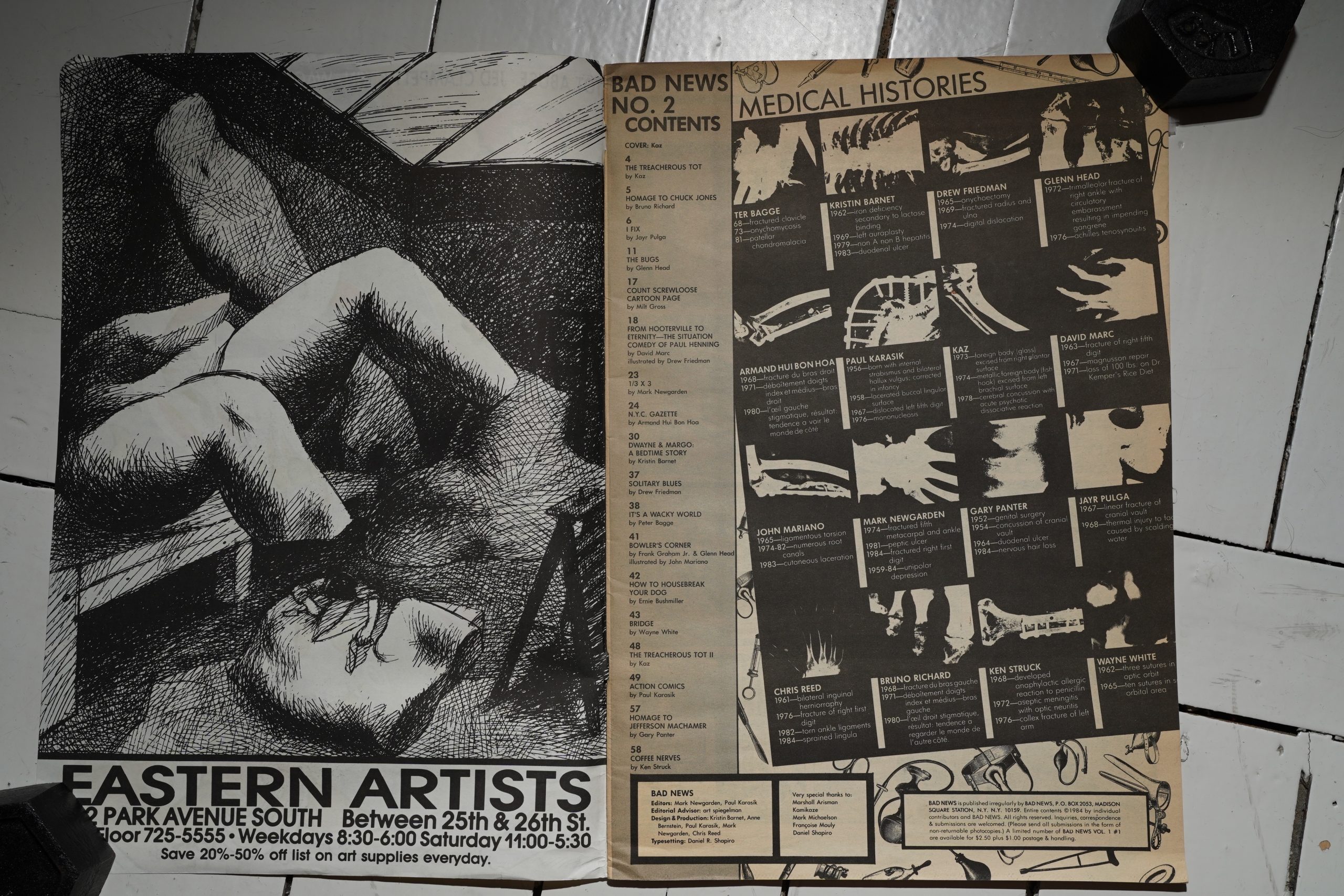 It’s printed on newsprint, but the covers uses a whiter stock — it’s pretty flimsy, though. 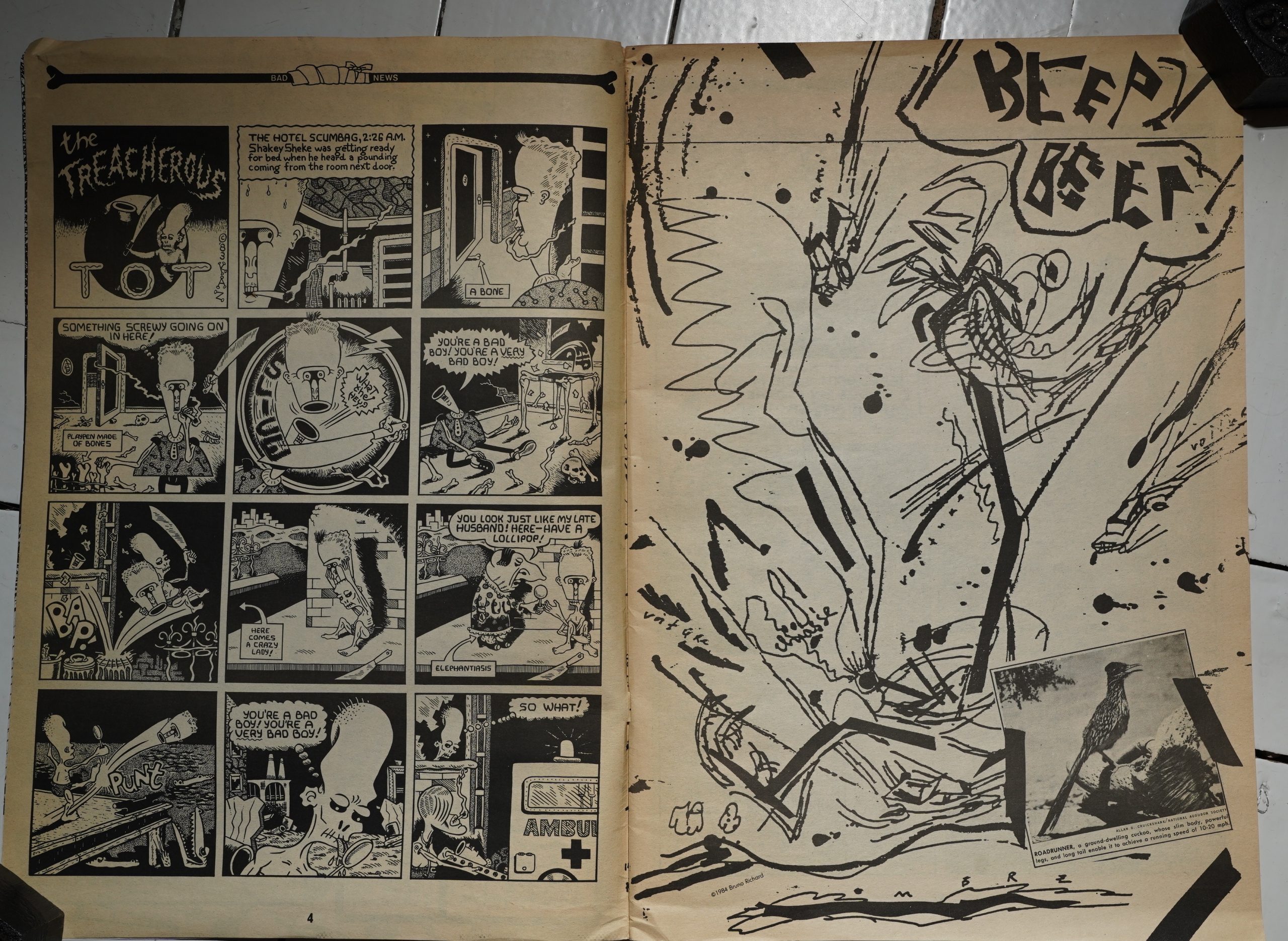 This is mostly shorter pieces (many of them a single page). Here we have a page each from Kaz and Bruno Richard. 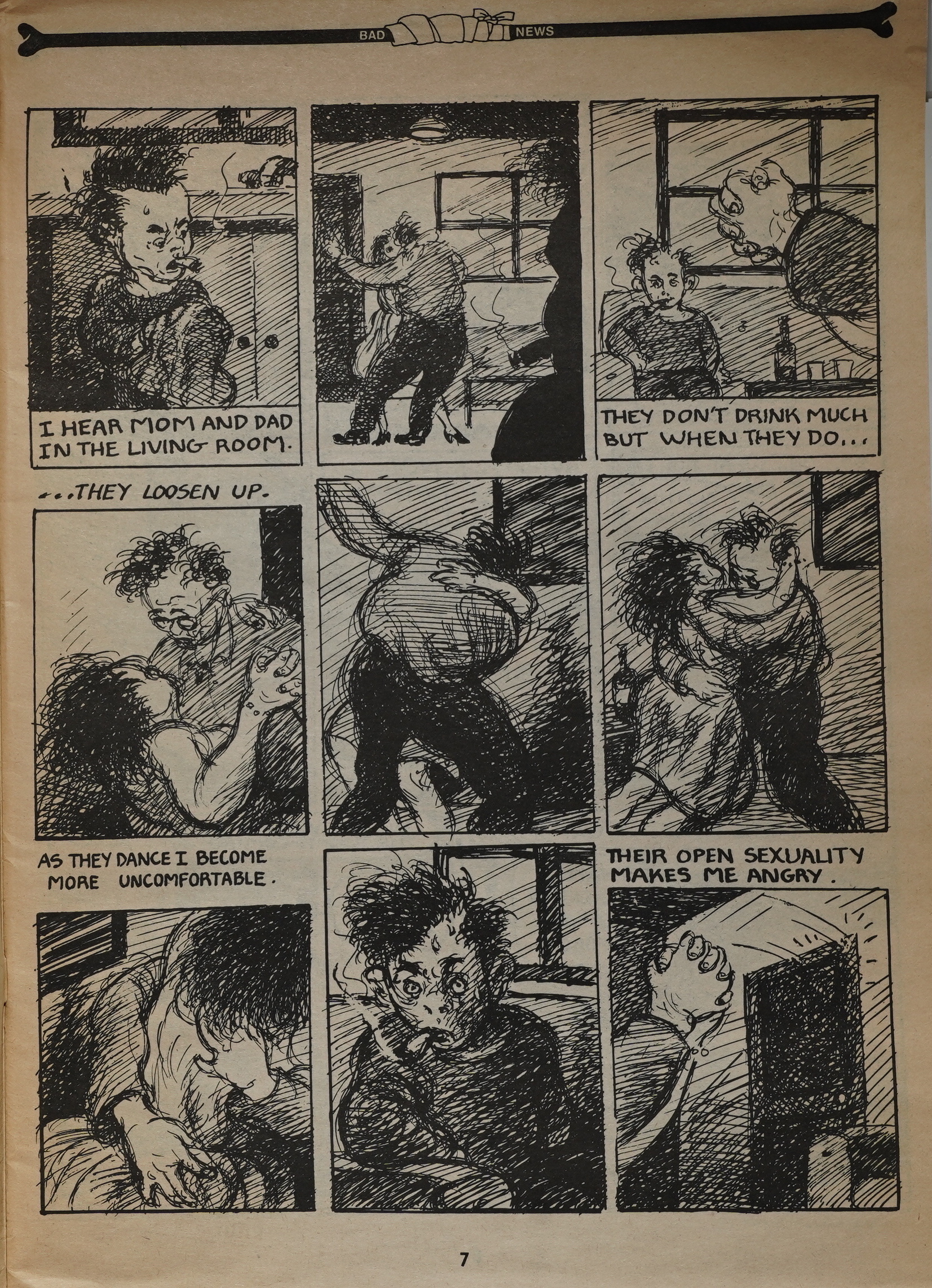 Quite a few of the artists from the first issue show up here (like Jayr Pulga and Glenn Head), but this isn’t just an SVA showcase any more — I guess the majority of the artists were not SVA people. 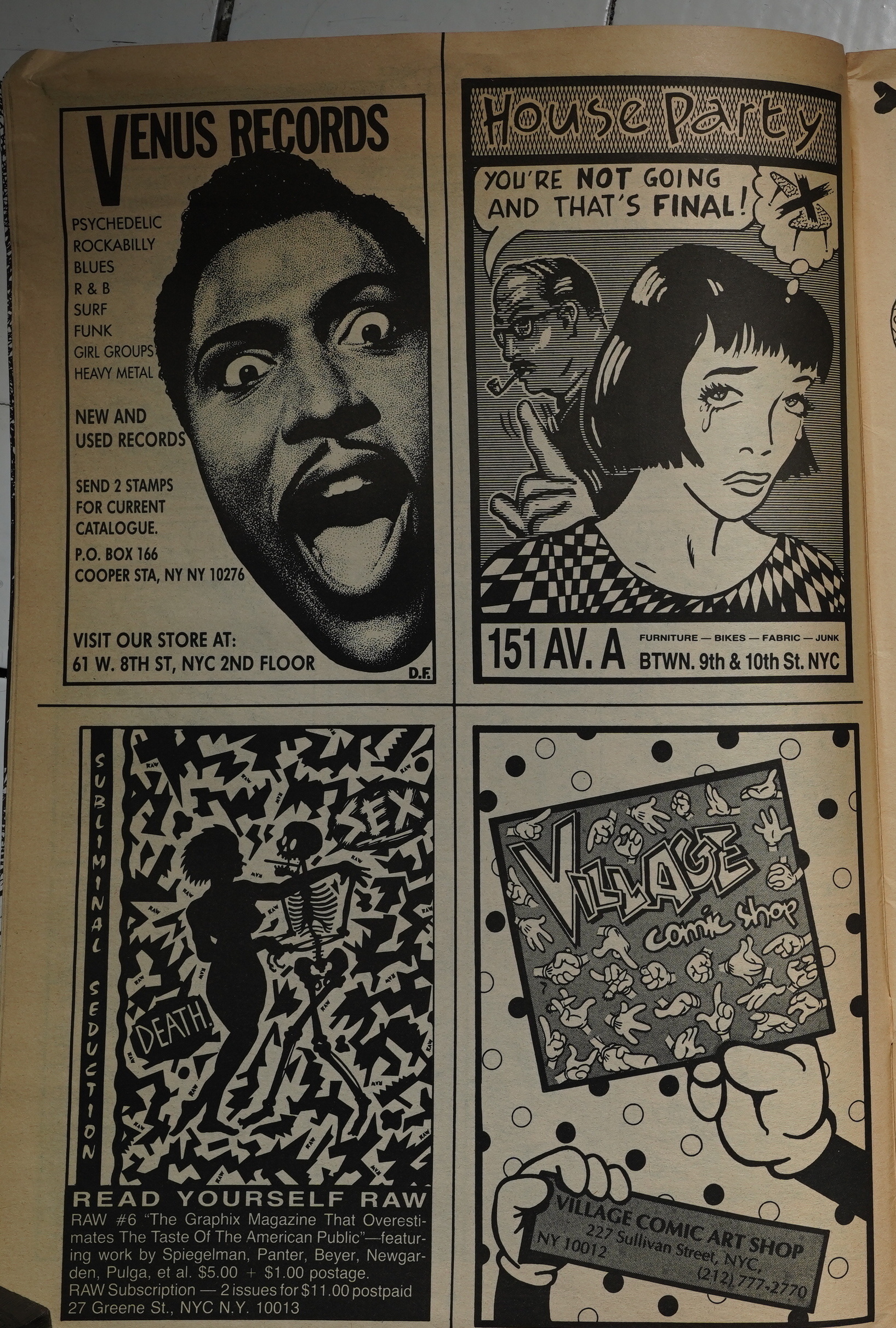 It looks like the editors manage to finance much of this through ads? There’s about half a dozen pages of ads intermixed with the comics. They look pretty good, though. 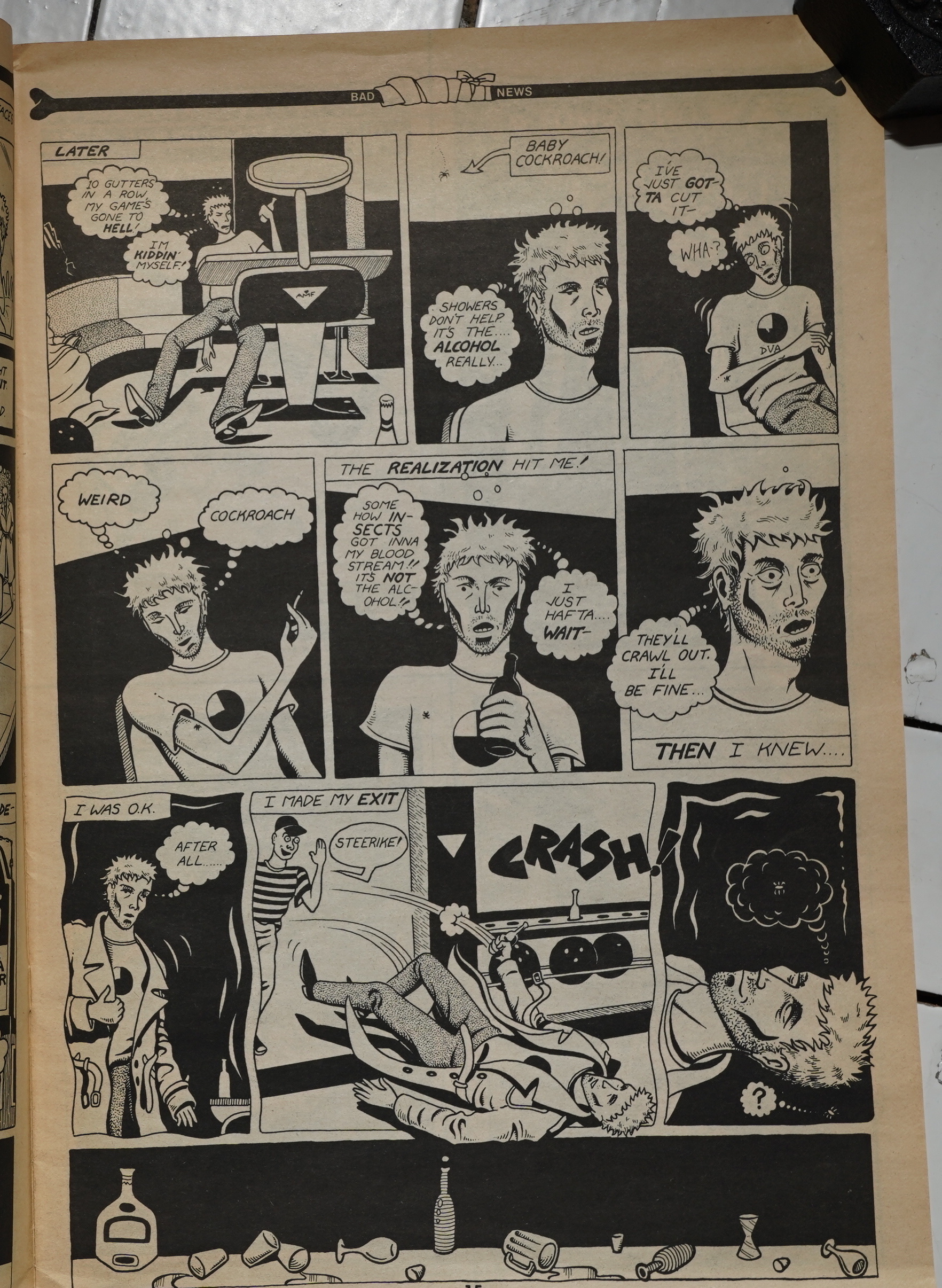 It’s a nice mix of shorter pieces and longer ones… but many of them do not seem to have been created with the tabloid format in mind, so you get these awkward filler panels at the top or the bottom. (Glenn Head here.) And there’s really no cohesion whatsoever — many of the individual pieces are really good, but it doesn’t amount to what you’d call a satisfying read. 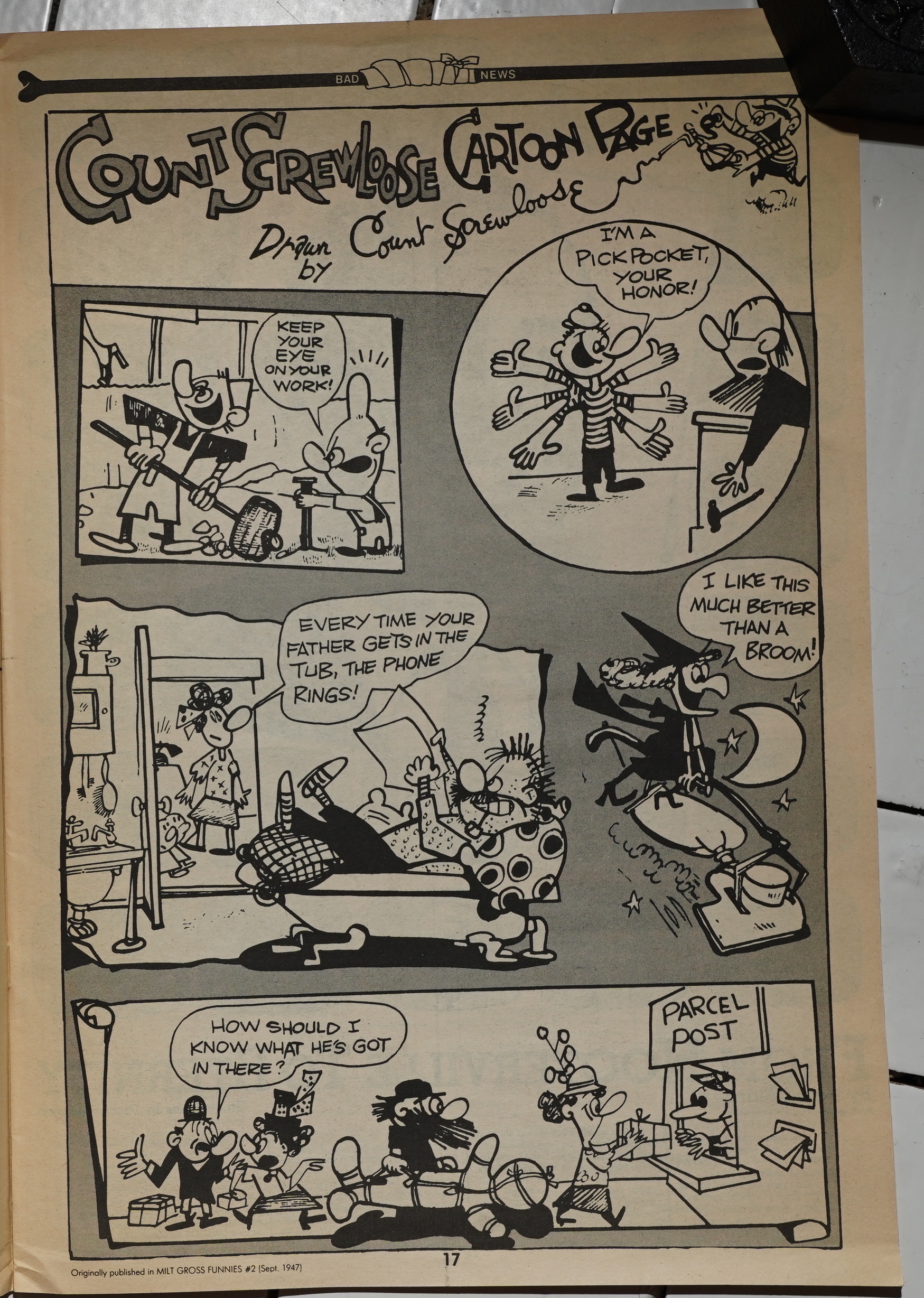 As with Raw, you get a reprint of some old stuff, but it’s pretty random here… (Milt Gross.) 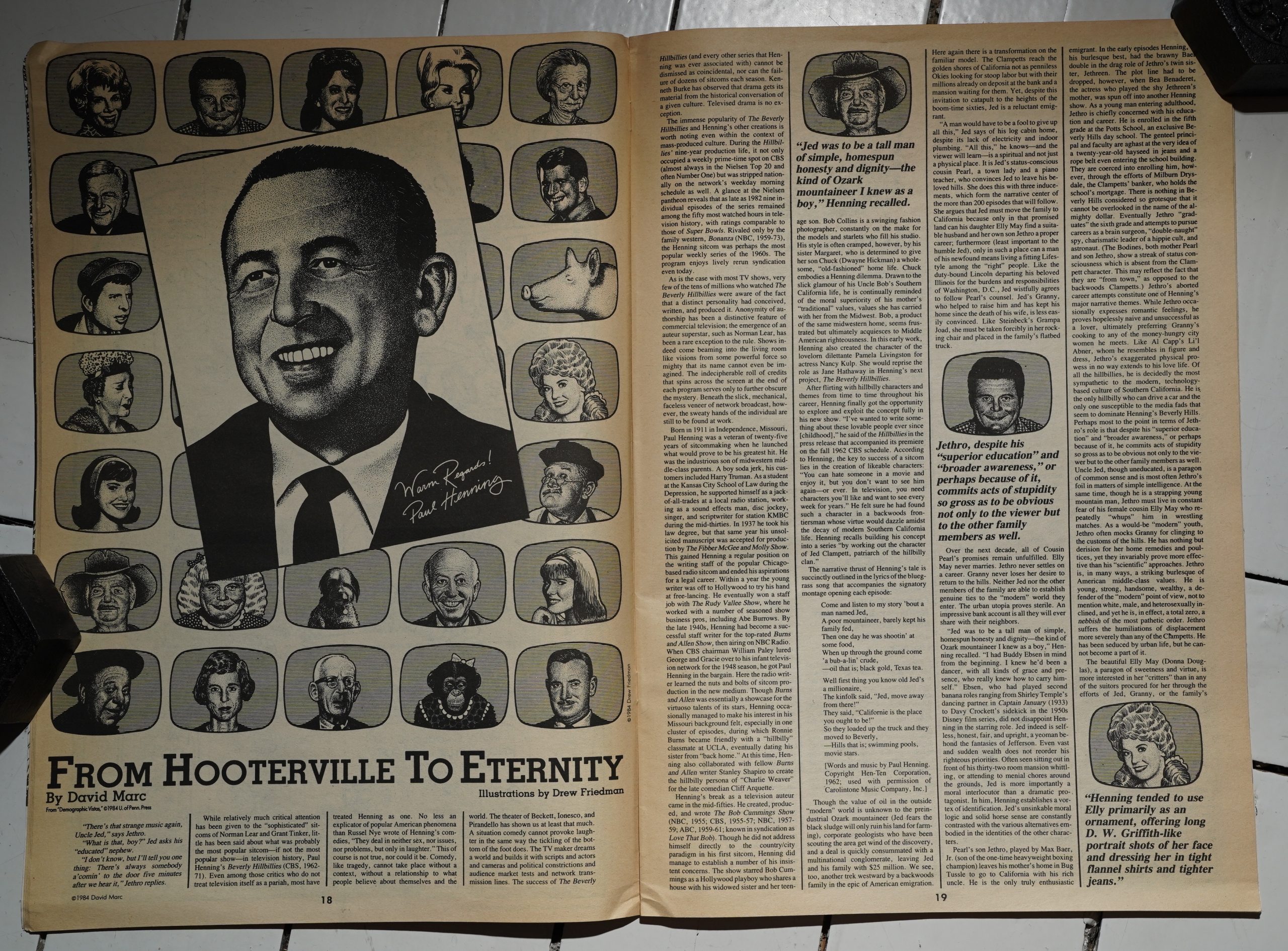 David Marc writes four pages about how good The Beverly Hillbillies are or something. I’ve never seen the show myself, so… perhaps he’s right? 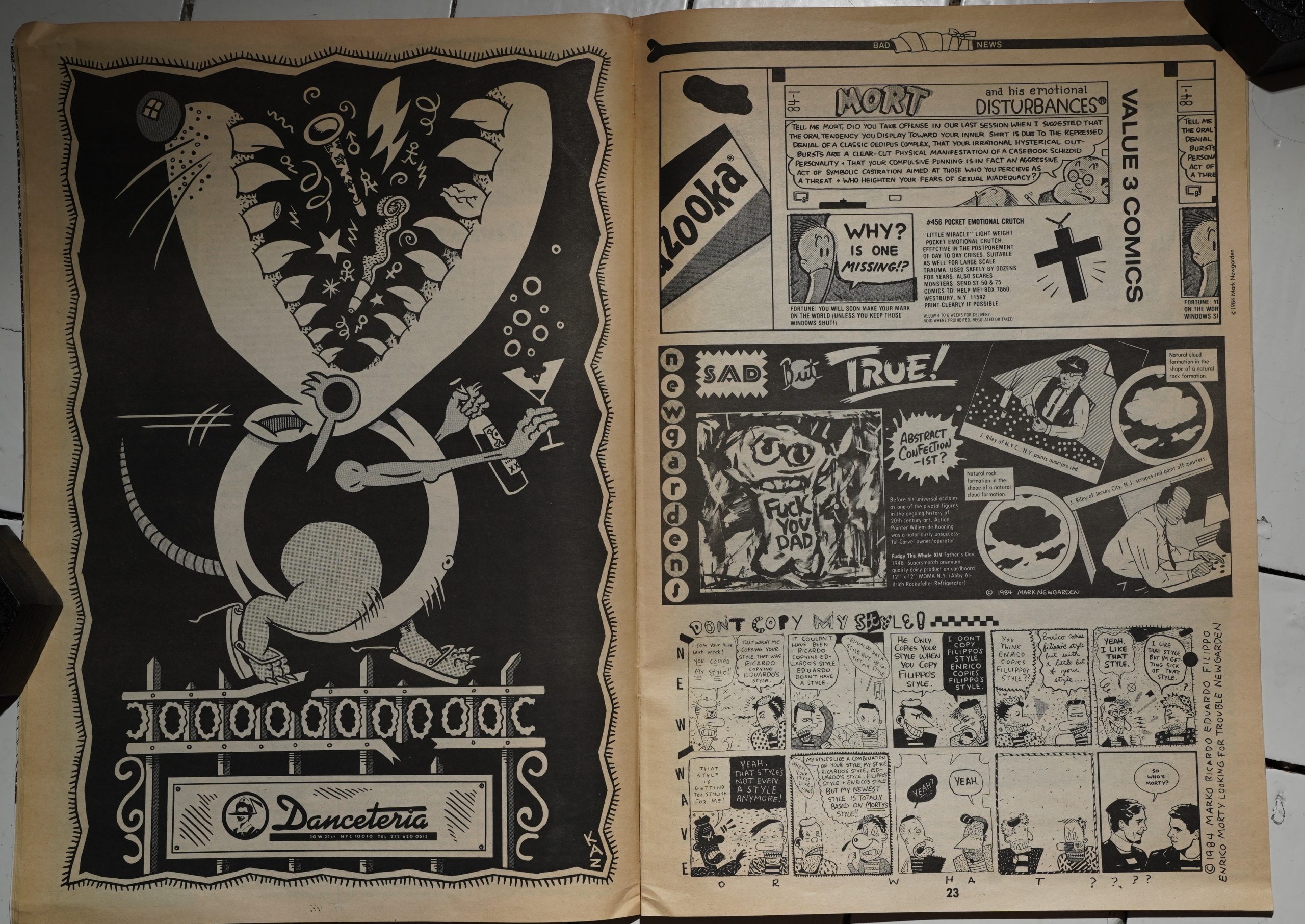 Editor Newgarden shows great restraint and only does a single page himself. Which fits the “ad newspaper/zine” aesthetic very well. And guess which styles he’s emulating in the strip at the end there… Let’s see… It’s Gary Panter, Lynda Barry, somebody, Mark Marek, himself, and… hm, a lot of them seem familiar. Can you guess them all? 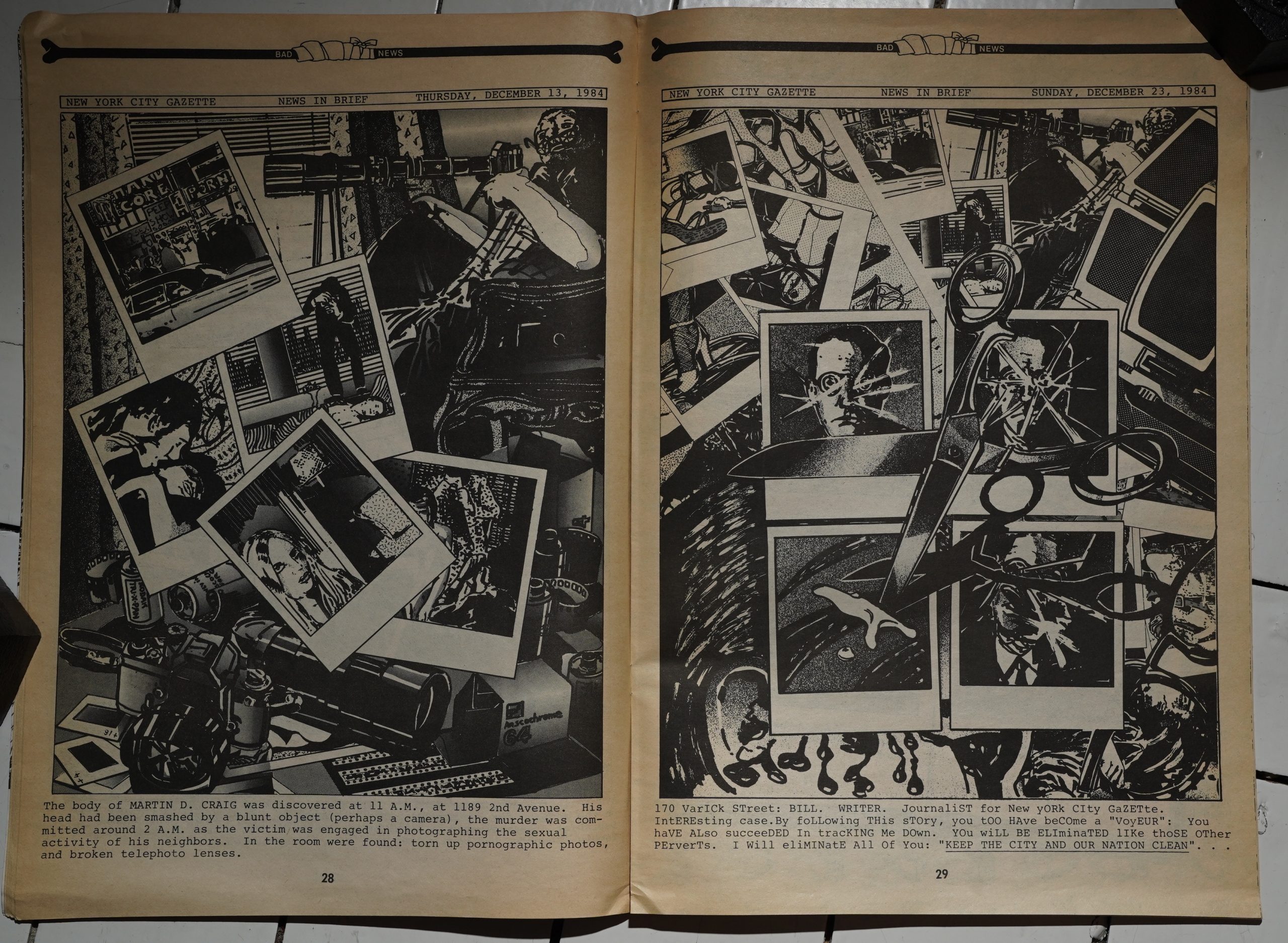 There’s some translated pieces here too, like this “you’re a spectator! haha! I’m clever!” thing by Armand Hui Bon Hoa. But the artwork’s intriguing. 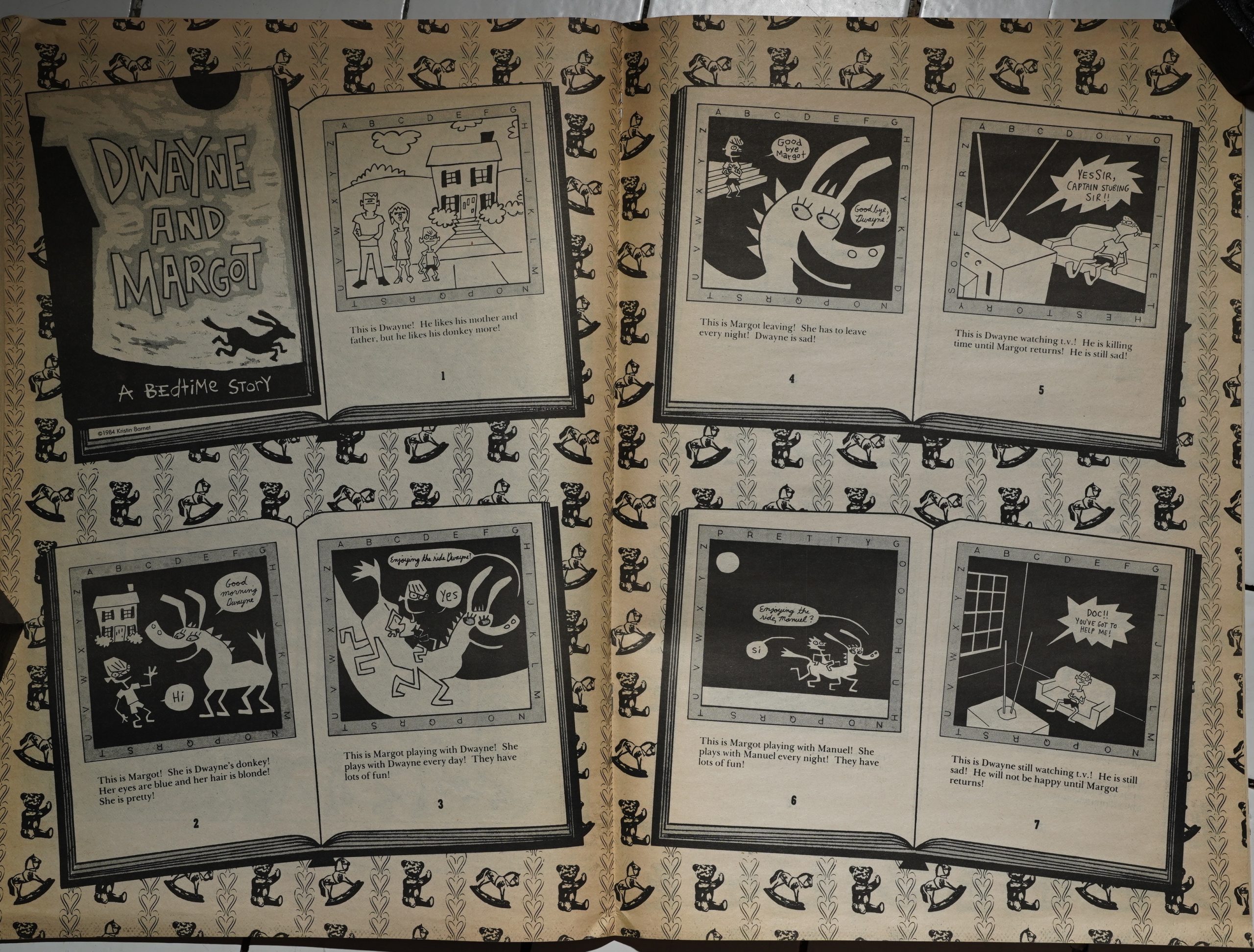 Kristin Barnet is possibly the only woman in the book? It’s a very amusing piece. 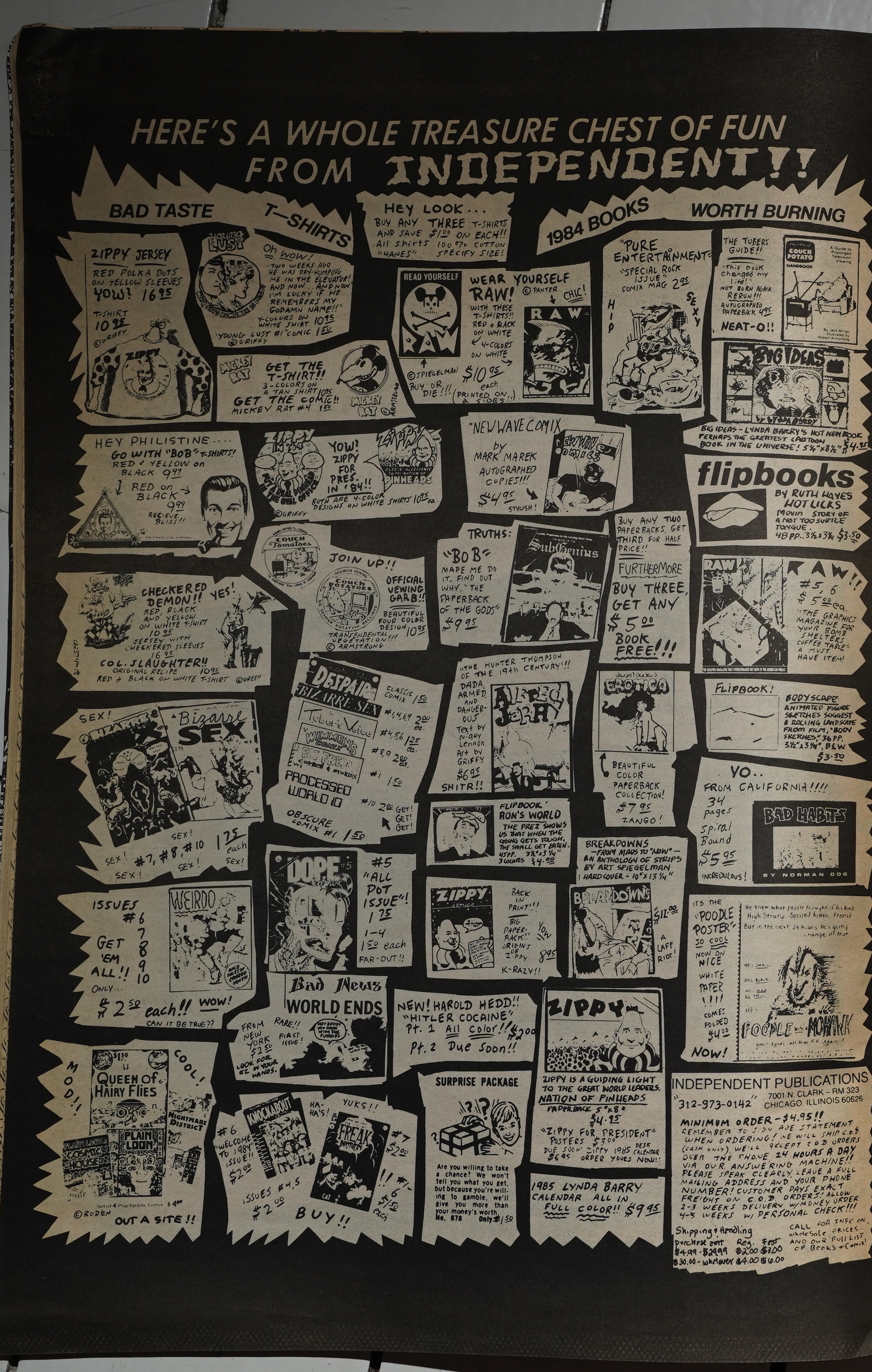 I find this ad quite intriguing because it mentions a lot of the books I’m covering in this series: Raw, Mark Marek, Lynda Barry, Breakdowns… and also a lot of the more edgy undergrounds (which I’m not covering). And also something called “Poodle With A Mohawk”, which I have to google. 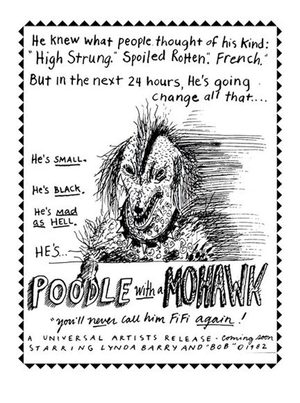 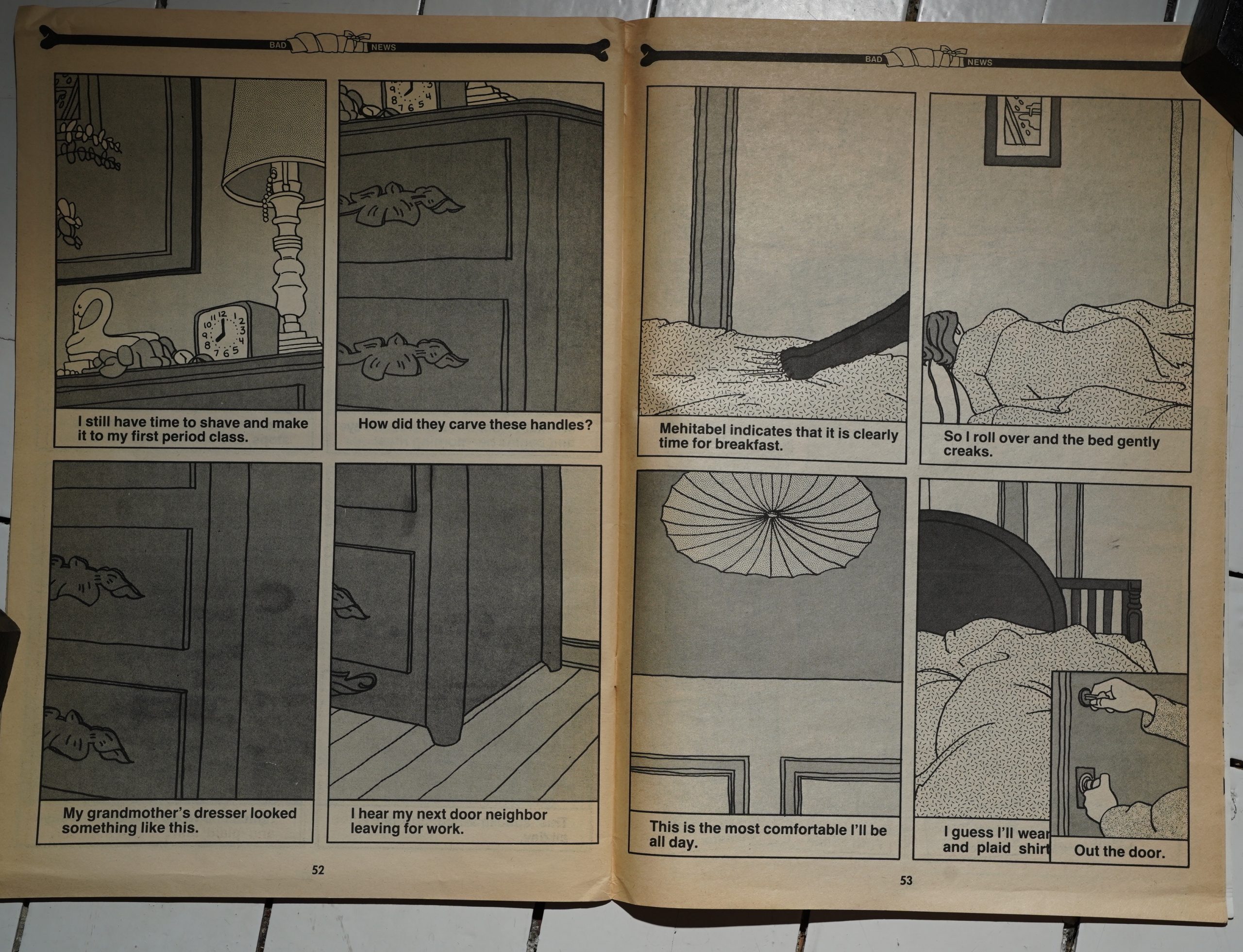 Finally we have a longer piece by Paul Karasik called “Action Comics”, and it’s absolutely amazing. It kinda points towards Here by Richard McGuire, but I guess this came first?

So: This isn’t quite Raw, but it’s a pretty amazing magazine.

IN 1984 OR ’85, I SAW BAD NEWS
at my local comic book shop in Houston.
I was just starting to get into “alternative
comics”— Love & Rockets, American Flagg’,
American Splendor, old undergrounds, etc.
I had heard of RAW but hadn’t yet seen a
copy. Bad News looked very different from
anything I’d seen before.
It was an oversized tabloid publication,
printed on newsprint witha saddle-stitched
spine. It stood out. The three-color Kaz
cover announced an uncompromising
stance — a semi-abstract skull thing play-
ing a low-tech, industrial pipe saxophone.
The player’s hand was incongruously real-
istic, like the hand in Duchamp’s famous
painting T’um. The banner above the pic-
ture read: ‘TOT ABUSE • JED CLAMPETT &
KIN • WACKY DESPAIR • BOWLING TIPS”
Bizarre! But Bad News #2 delivered every-
thing it promised.
The contents page was also a beautiful
exercise in carefully controlled punk post-
modernism. Instead of “about the artists,”
Bad News#2 had medical histories for each
of the creators, each illustrated with an x-
ray. They were revealing — while Drew
Friedman suffered a fractured radius and
ulna in 1969 and digital dislocation in 1974,
Kaz experienced a cerebral concussion with
acute psychotic dissociative reaction in
1978. Pretty much says it all! (The two
French artists had their medical histories in
French— Bruno Richard, for instance, had a
fracture du bras gauche in 1968.)
With this much cool window dressing,
the contents had a lot to live up to. And
they did! The two Kaz stories, “The Treach-
erous Tot” and “The Treacherous Tot II,”
defined a punk outlook on life — amoral,
streetwise children killing their elders in
horrific, alienating cities. All was allowed
as long as it was stylish and funny.
Glenn Head’s spectacular story “The
Bugs,” starring the frankly autobiographi-
cal character Chester, was an amazing trip
into the gutter of alcoholism.

Paul Karasik’s “Action Comics!” is the
third great story in Bad News#2. This eight-
page story deals with the passage of time
and how it is perceived. The story is first
person, seen through the eyes of the pro-
tagonist. The first five pages depict him
waking up and slowly deciding to get out of
bed. The panels are big (four to a page) and
full of open flat values (simple line art
drawings of the room filled with various
shades of Zip-a-tone). The narration con-
sists of half-asleep morning thoughts. The
final “waking up” panel, a shot of the light
fixture above the bed, reads, “This is the
most comfortable I’ll be all day.” Then we
get two pages of smaller, more crowded
panels. Suddenly we have motion lines (the
“Action” referred to in the title). The panels
are all slightly tilted. They depict quick
fragments of what the narrator is seeing.
He is a schoolteacher rushing through his
classes. The narration is blunt, usually
only one word per panel (“Mail,” “Recess,”
“Shuffle,” “Climb,” etc.) Then the last page
goes back to the calm, slow approach of the
opening — as the narrator drifts off to
sleep. I’m not sure I’d want to see a lot of
comics stories like this one, but “Action
Comics” was a quiet tour de force.
Other highlights include an early Chet
and Bunny Leeway story by Peter Bagge, a
page by Milt Gross reprinted from Milt
Gross Funnies #2 (1947), a weird sketchy
story by Jayr Pulga, a lengthy excerpt from
the book Democratic Vistas dealing with
the Beverly Hillbillies, Green Acres and Pet-
ticoat Junction (illustrated by Drew Fried-
man), and a bizarre tribute to Chuck Jones
cartoons by Bruno Richard.

Bad News fell right between RAWs
arty refinement and Weirdo’s primitive
kookiness. Curiously enough, neither Bad
News#l nor Bad News#3 was nearly as good
— the first issue was too amateurish, and
the third felt like an afterthought. Bad News
#2 perfectly embodied a punk, post-mod-
ern approach to comics. Its urban “fuck you”
sensibility now informs a big segment of the
alternative comics scene today (Hate, Steven,
Underworld, Zero Zero, etc.). Thirteen years
later, Bad News#2 still strikes me as one of
the finest anthologies ever done.

On the
second one, Paul Karasik and I independently did it. We
published it, edited it, went out and got ads for it, got it
printed, the whole thing. A painful experience. We leamed
a lot, but I’d never want to go through it again.