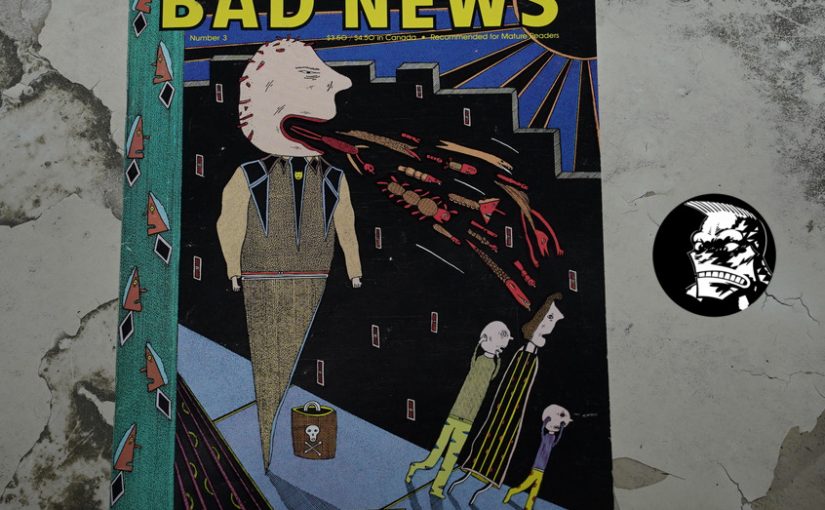 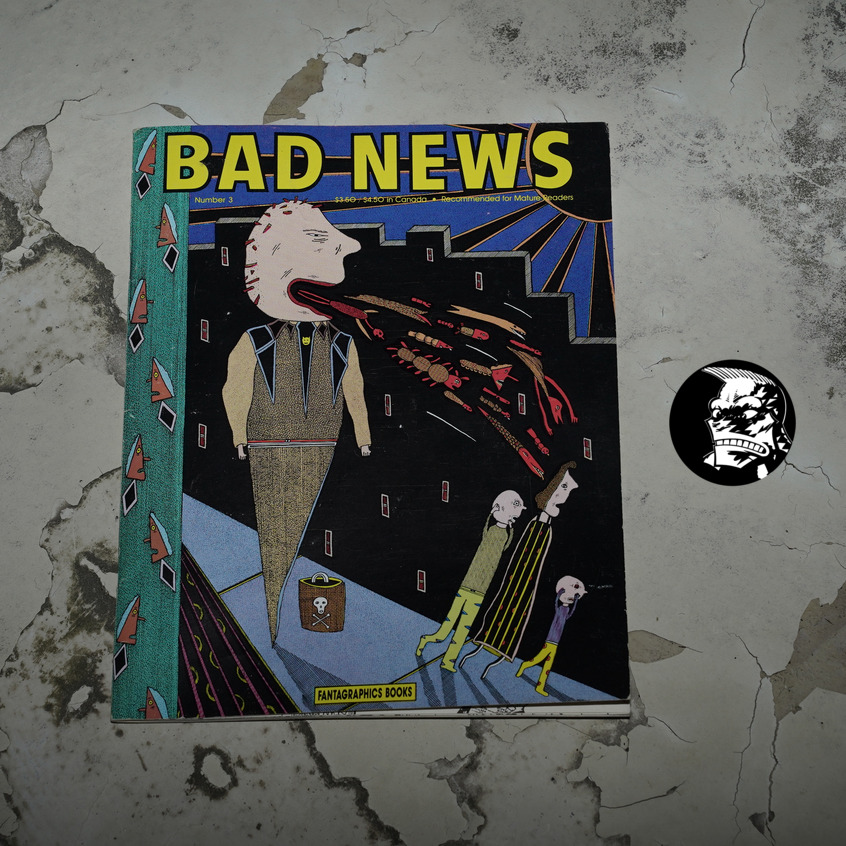 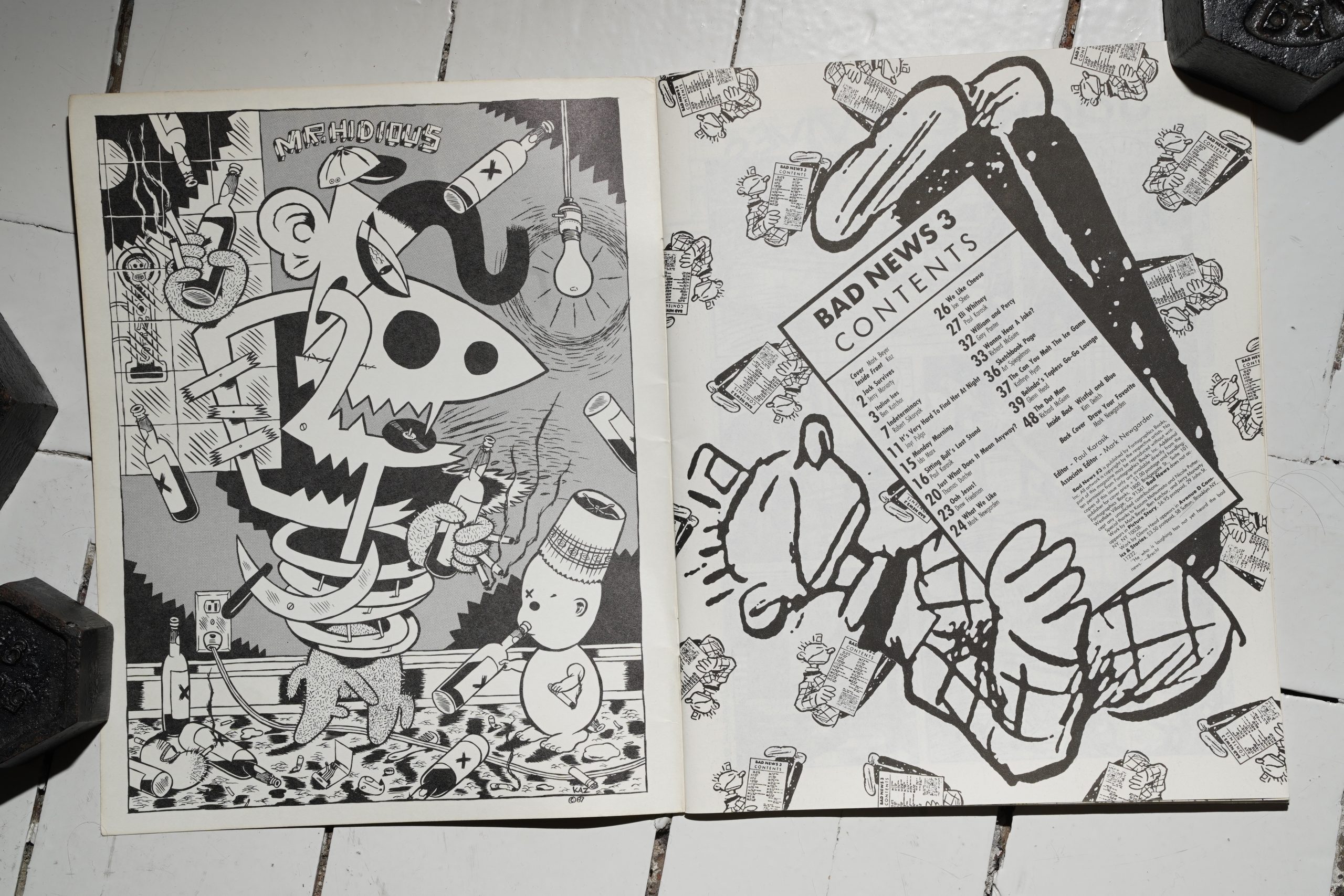 This is the third and final issue of the magazine that started as a class assignment at the School of Visual Arts, but I think by this point, it wasn’t that at all… although it featured many people who had gone to the SVA (or been a teacher there). (Kaz above, and a quite stylish contents page.) 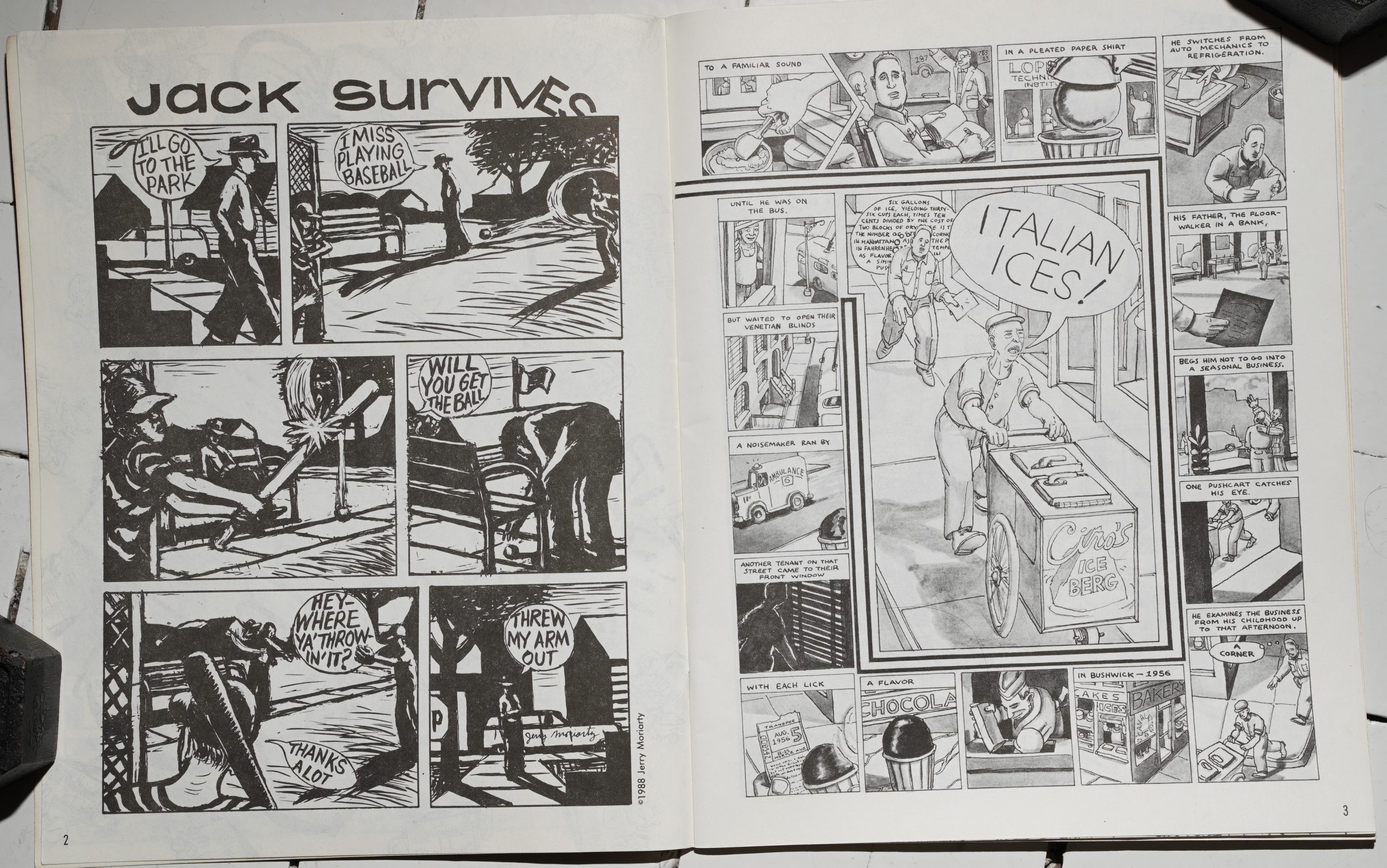 Here we have Jerry Moriarty (a teacher at the SVA, I think?) and a Ben Katchor thing that’s quite amusing to read — it spirals inwards in a quite natural fashion. In the lower right hand corner, there’s even a street corner to guide the eyes in the right direction. 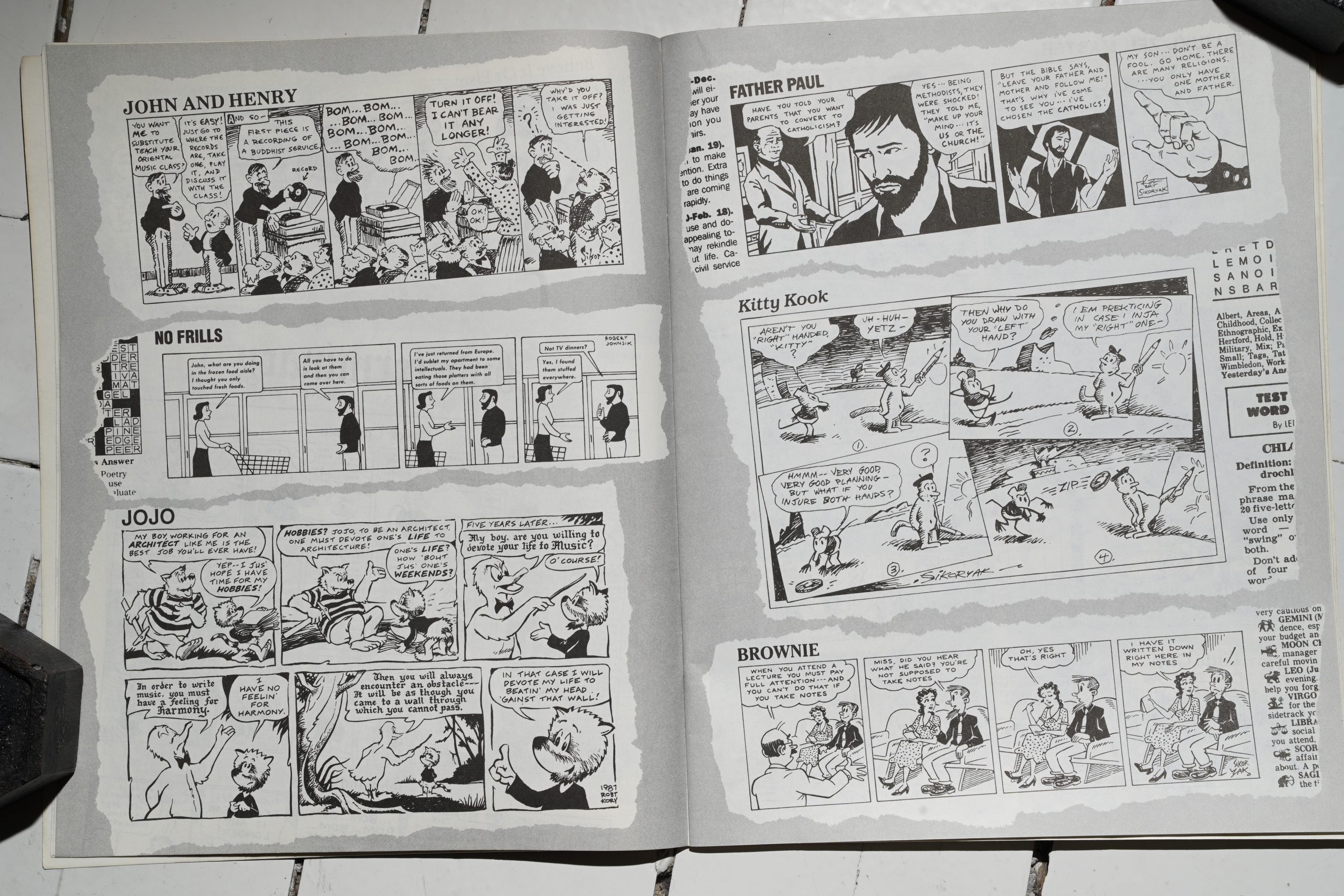 Robert Sikoryak retells a bunch of John Cage anecdotes as if they were comic strips. It’s fun. 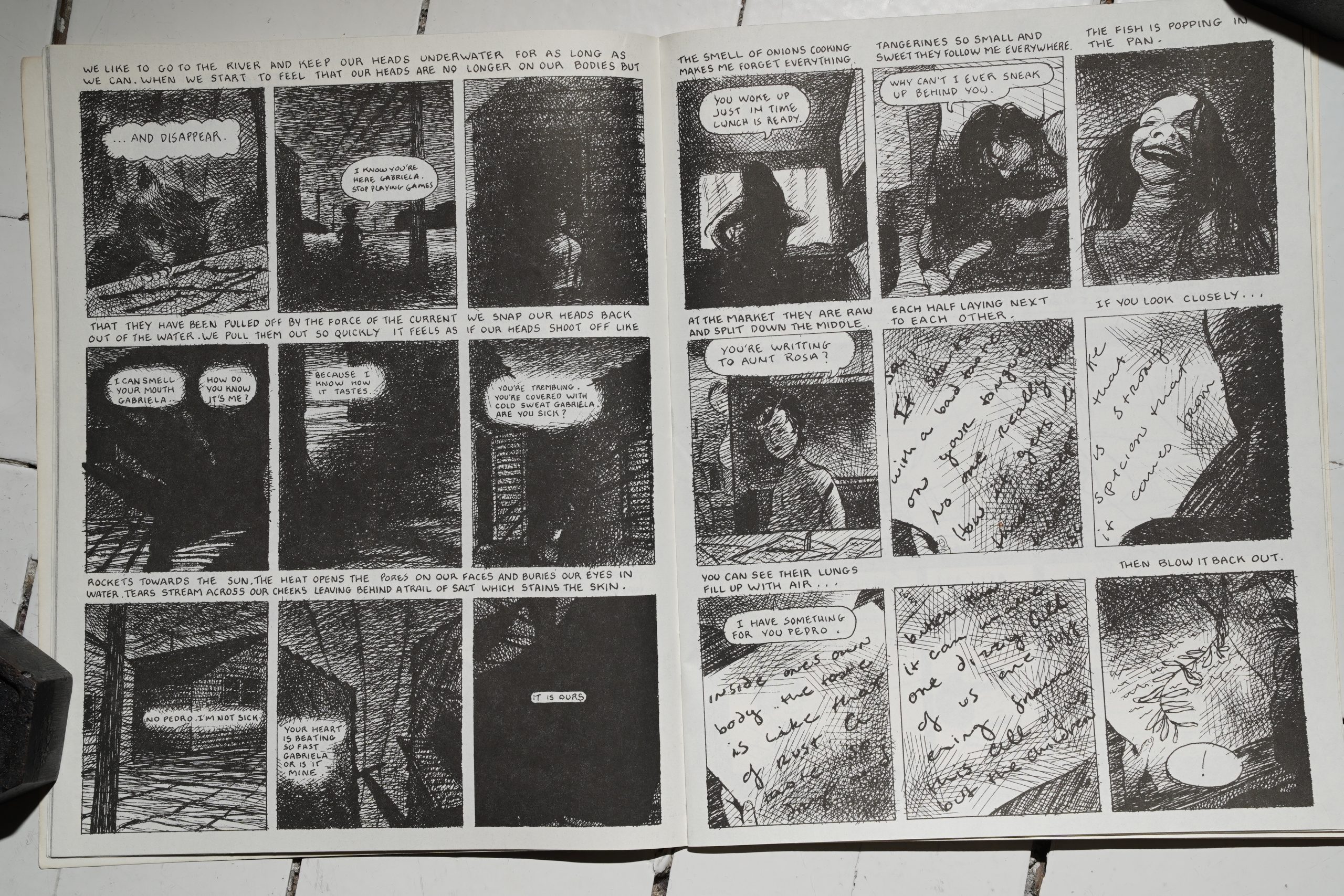 Ooh! Jayr Pulga! I think he’s been featured in at least half a dozen of the books I’ve been covering in this blog series, but I know nothing about him. Let’s google! Hm… He doesn’t seem to ever have published a stand-alone book, which is a shame, because he does all these interesting things, storytelling-wise, and his artwork is gorgeous, of course, and quite a bit unnerving… Here’s his web site; looks like he went into illustration? Probably a wise choice. I mean, illustration is something you can make a living from. 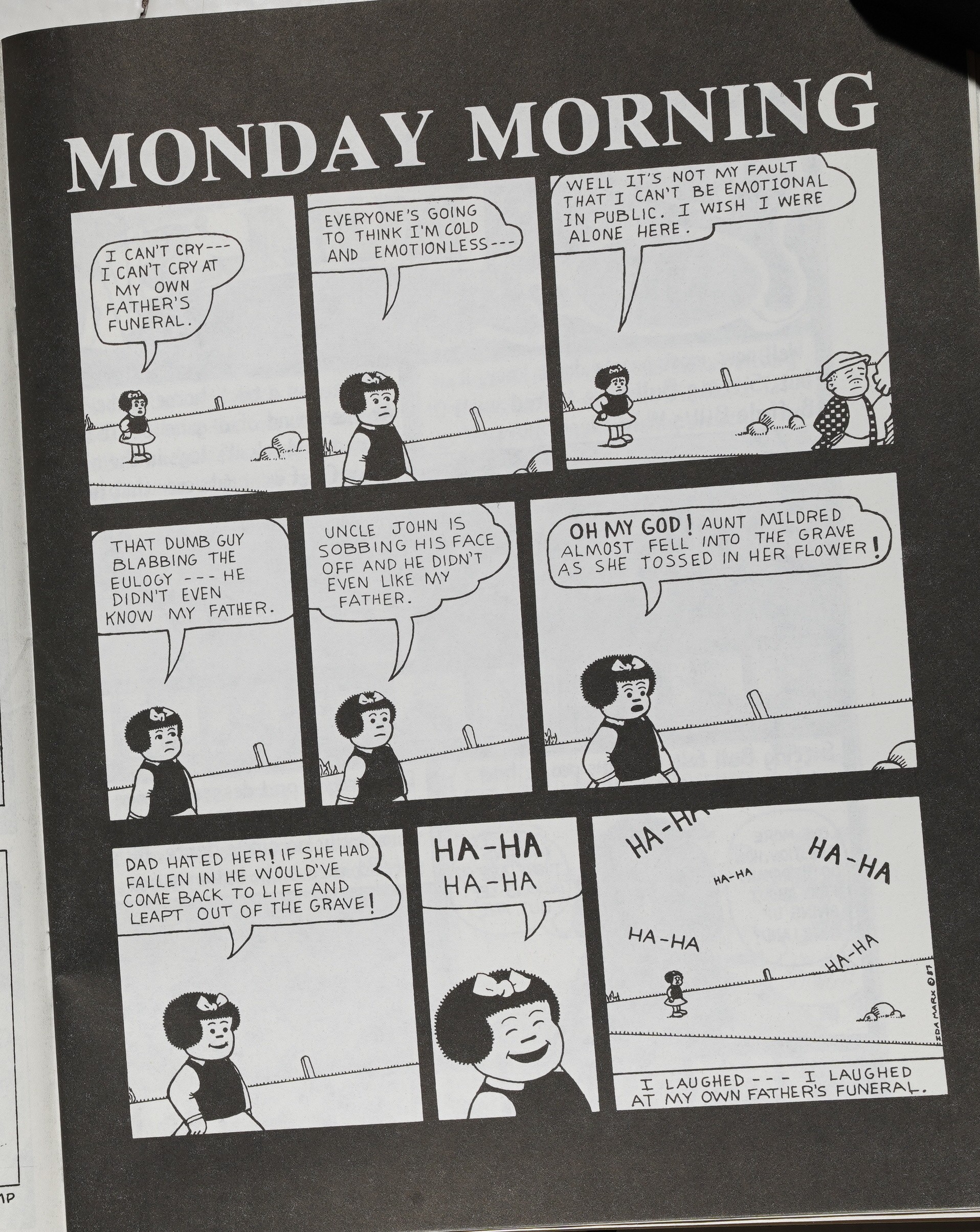 Ida Marx channels Nancy. As one does. 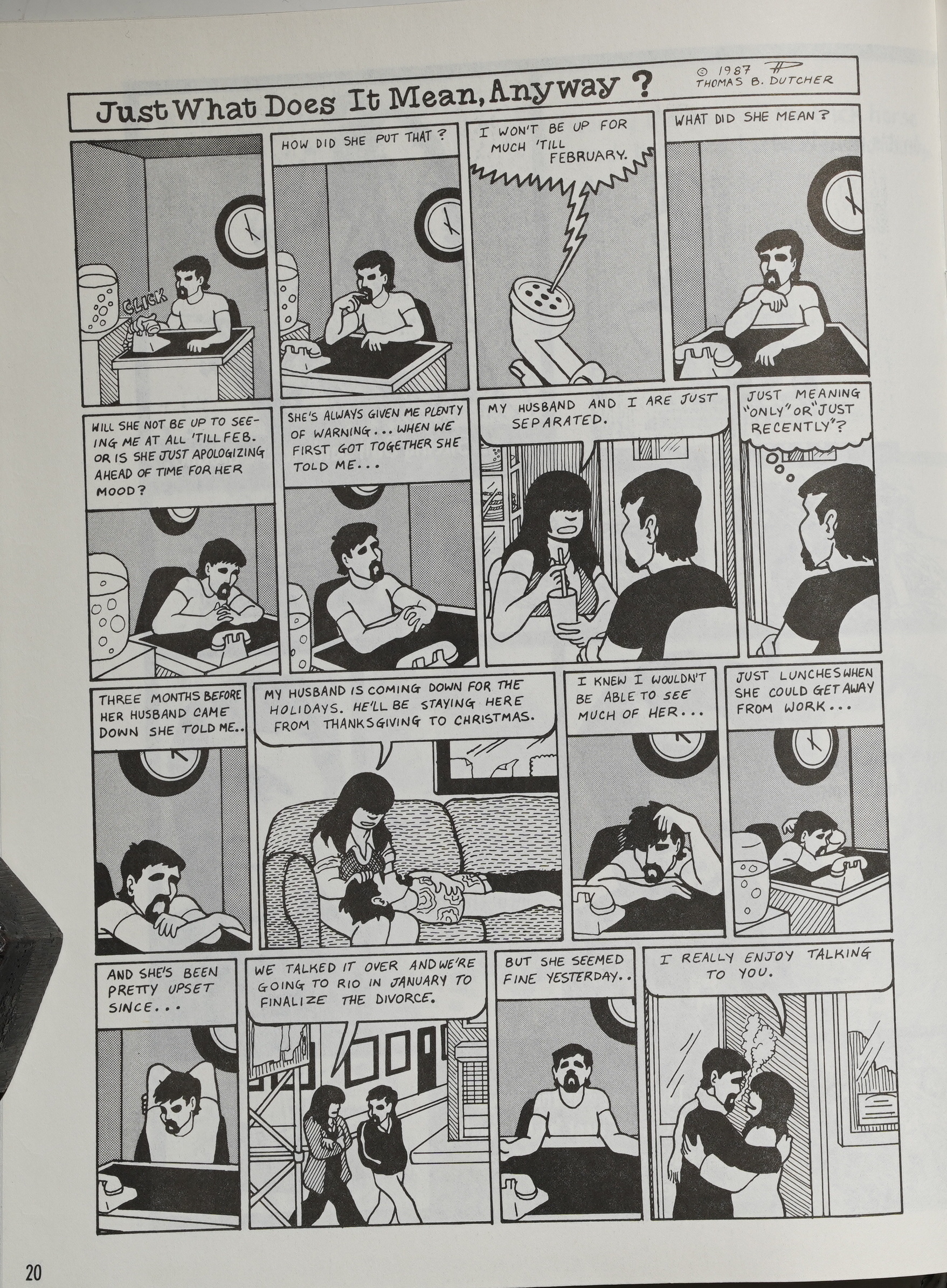 This book has a great flow — each piece seems to relate to the next one, but not in an overt fashion. The Ida Marx page, for instance, which told a very personal, heartbreaking story in a distanced, formal way, echoes nicely in this longer piece by Thomas B. Dutcher, which is also about heartbreak, and is also told in this distanced way… They’re very different stories, of course, and you kinda wish somebody would just say to Dutcher “well, you could ask her to, like, clarify”… but anyway. 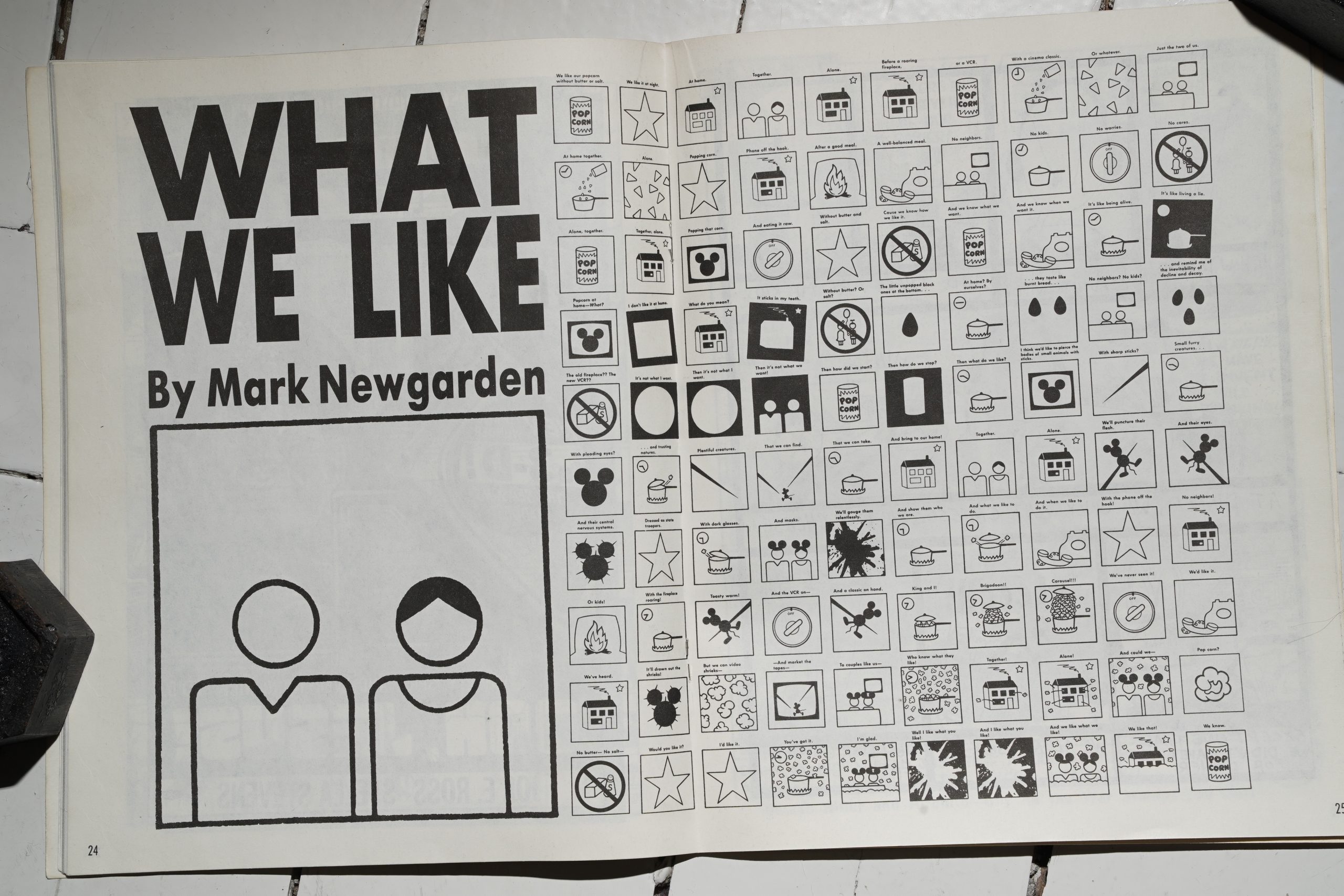 Oooh! I remember this one so well! I re-read it a gazillion times and adapted it for the Amiga. It’s such a simple conceit, and it’s so disturbing.

This was apparently not the piece Mark Newgarden had planned on including in this issue: Art Spiegelman famously (and allegedly) threatened Paul Karasik and made him hand over two pieces meant for Bad News #3 to Spiegelman: The Newgarden Nancy piece (the best thing in Raw #8) and Richard McGuire’s Here (the best thing, I vaguely remember, in Raw vol 2 #1). 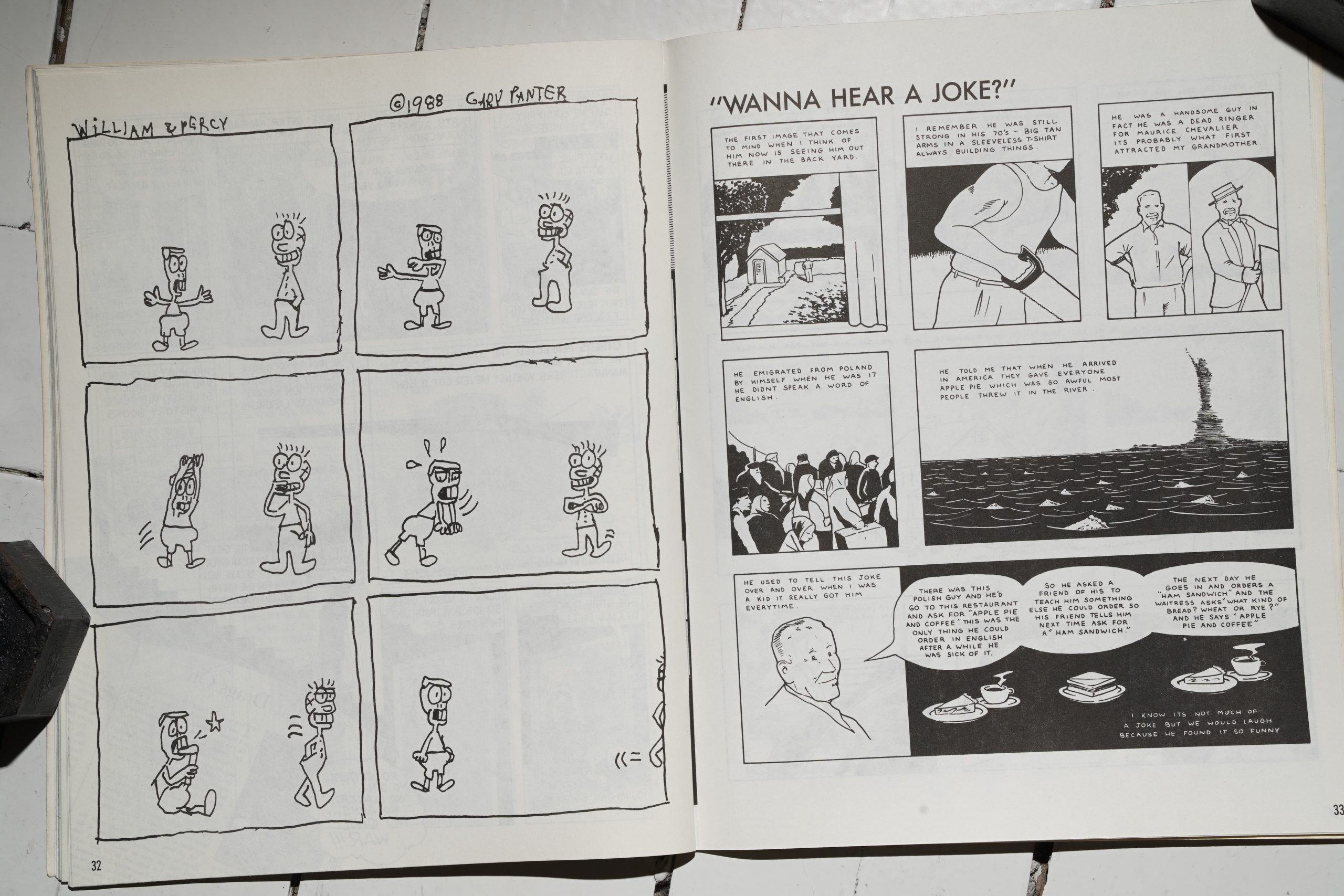 Perhaps for the best, in some ways: McGuire’s Here had a huge impact over in Raw, and is one of the most influential single art comics pieces ever, and that may not have happened in this book (which I assume had tiny sales, and in the comics speciality market only). (And since this is Fantagraphics in 1988, the paper stock is absolutely horrendous — there’s a lot of bleed-through on these pages, which makes everything look kinda… meh…)

McGuire does a pretty amusing strip about his grandfather instead here.

(Oh, and a tiny little thing from Gary Panter here, too.) 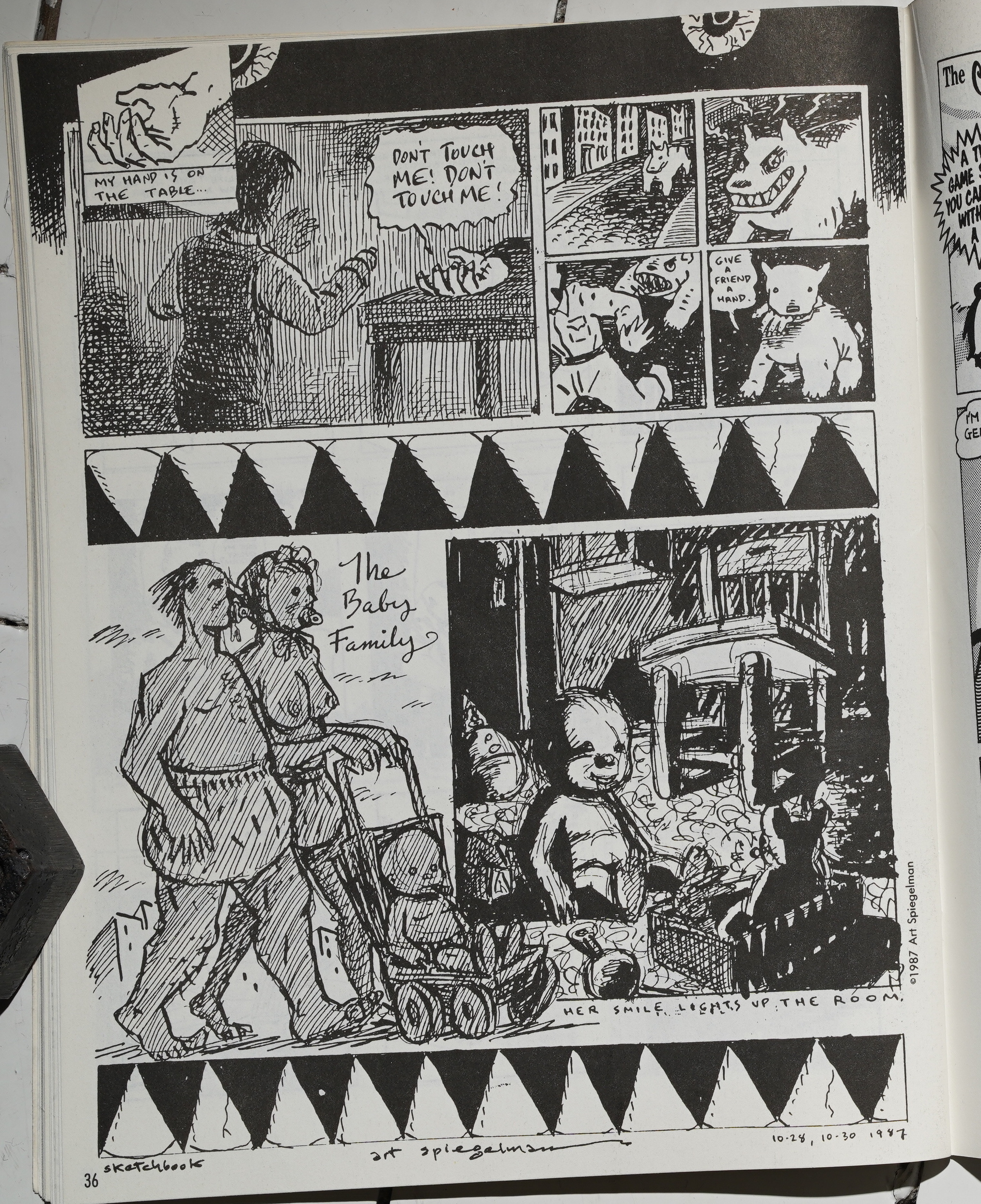 Spiegelman shows up himself with a page from his sketchbook. Perhaps as a consolation prize for stealing the two pieces?

Anyway. This is a solid anthology. I only wish it had been printed on better paper.

Bad News fell right between RAWs
arty refinement and Weirdo’s primitive
kookiness. Curiously enough, neither Bad
News#l nor Bad News#3 was nearly as good
— the first issue was too amateurish, and
the third felt like an afterthought. Bad News
#2 perfectly embodied a punk, post-mod-
ern approach to comics. Its urban “fuck you”
sensibility now informs a big segment of the
alternative comics scene today (Hate, Steven,
Underworld, Zero Zero, etc.). Thirteen years
later, Bad News#2 still strikes me as one of
the finest anthologies ever done.

Sikoryak is interviewed in The Comics Journal #255, page 95:

Sorry for quoting so much here, but I just found this bit about the Raw offices interesting.