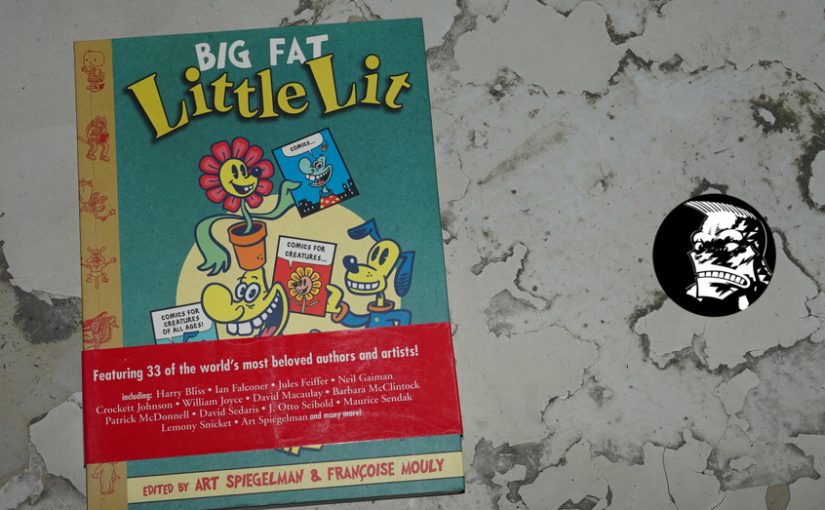 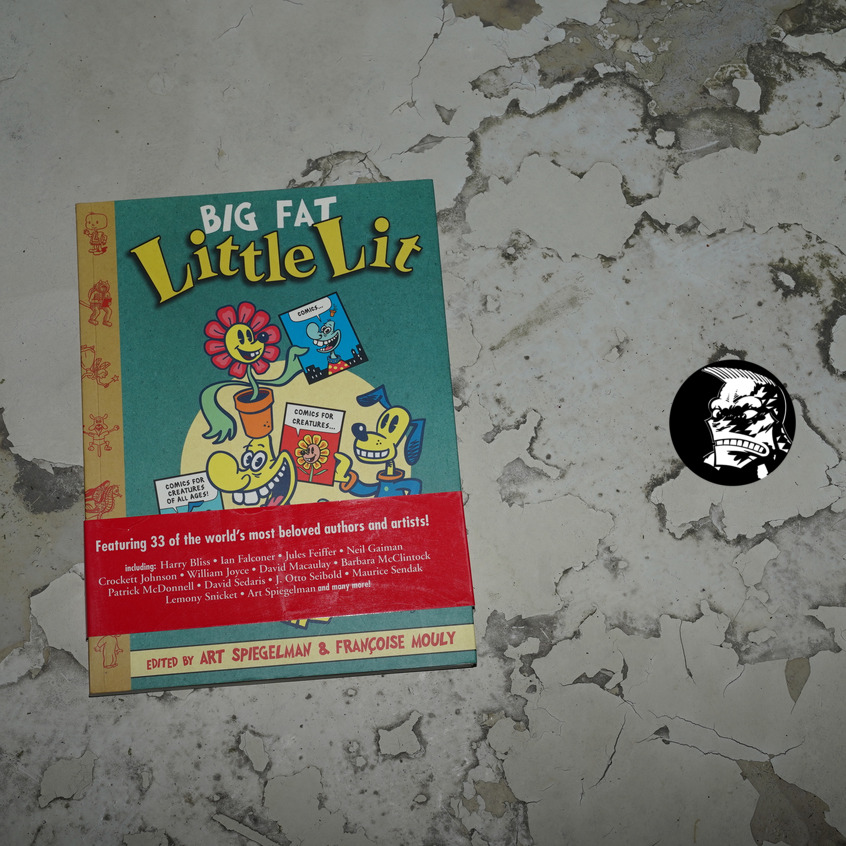 I’m not quite sure how I ended up with this book — I probably bought it not knowing that it was a reprint of the three Little Lit volumes? 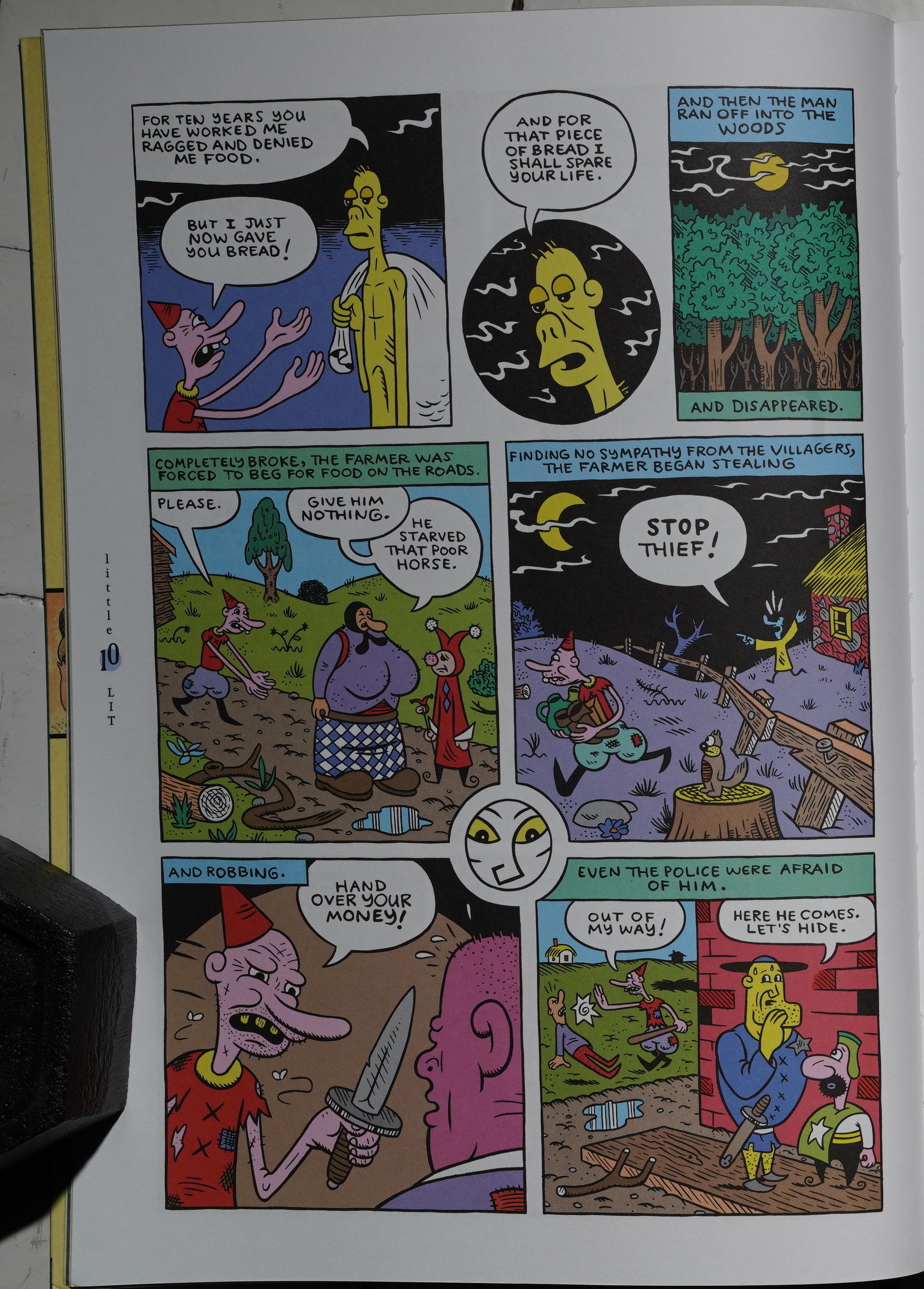 Two of the Little Lit books had themes (fairy tales and “silly night”), but the order in this collection is pretty random. They open with the Kaz story, which is a pretty odd thing to start with, because it’s a somewhat harsh story… 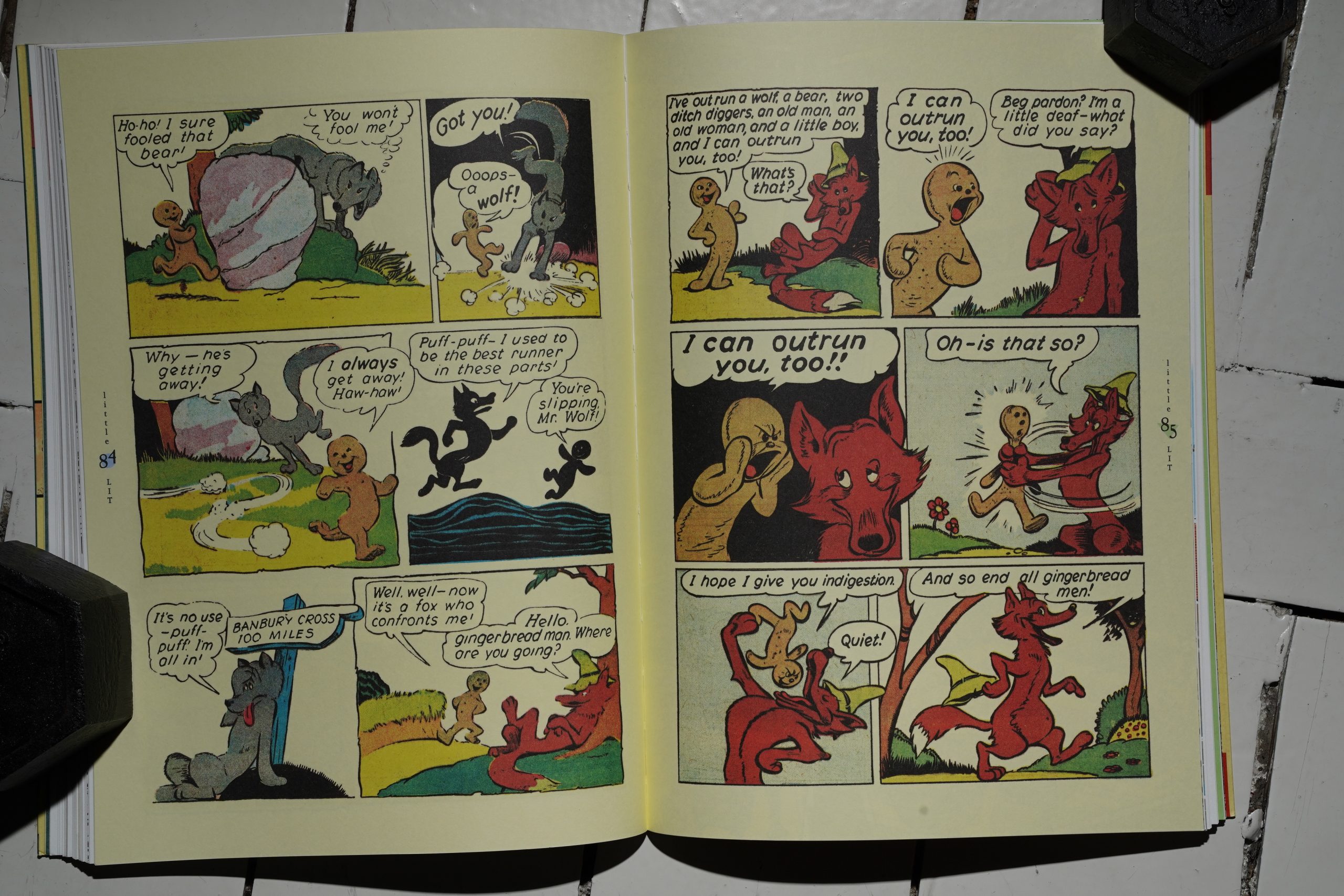 The oldee tymey stories that were reprinted in the three books are included here, too… 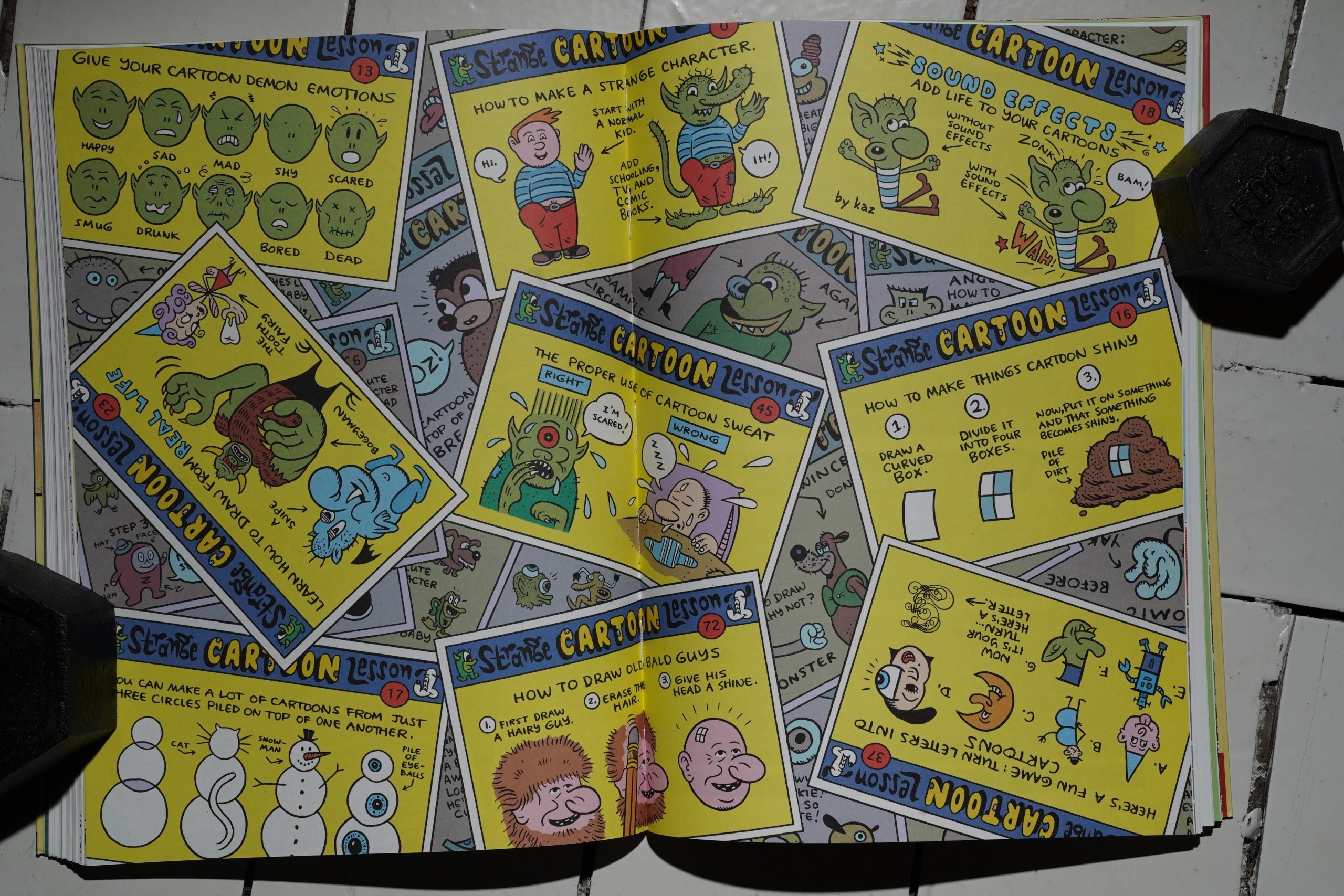 Even the endpapers are included! So I wondered — does this reprint everything, just in a slightly smaller format (this is more normal album-sized, while the three books were larger). 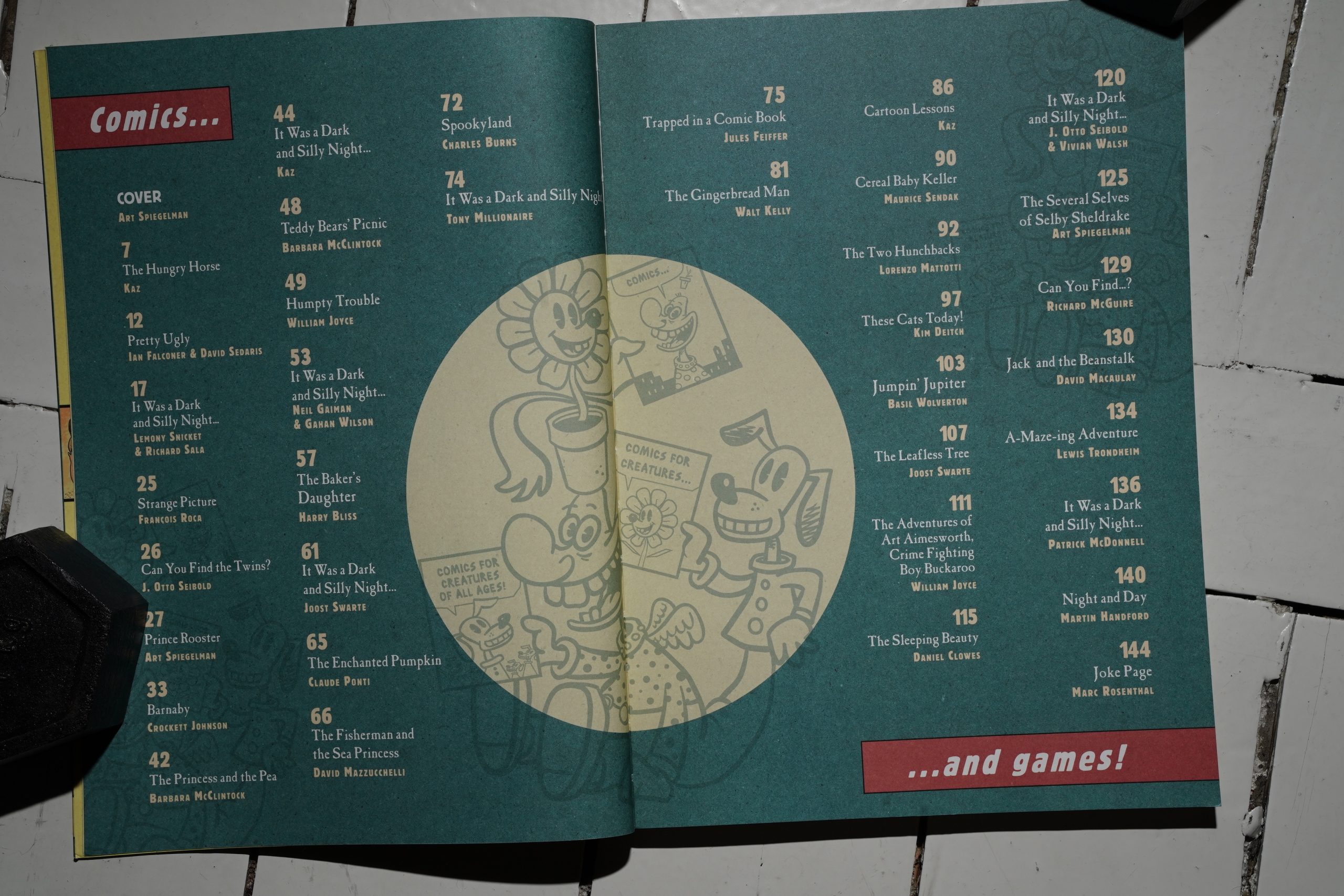 But no. This leaves out at least 30 pages from the original books? I have not done a survey of what’s left out, because… er… you know… that’s like work, but I do note that the Loustal/Paul Auster story (which was good, but had nothing to do with anything) isn’t included.

So perhaps they edited out the stuff that just… wasn’t totally right? Or perhaps they just had a 144 page limit and they started chopping away. Or… contractual reasons…?

I can only guess.

Hm… Oh! They Posy Simmonds story isn’t here, either? But that one was quite good! And perfect in this context!

Now I’m really guessing it was for contractual reasons.

Art Spiegelman writes in the year-end summary thing in The Comics Journal #279, page 21:

And for the young
folks, might I humbly
call your attention to
our shiny new Big Fat
Little Lit, as the book has
just been more “priv-
ished” than published
by Puffin/Pen-
guin. Edited by Fran-
goise Mouly and myself,
this handsome 144-page
paperback serves up
most of the contents of
our three $20 hardcover
Little Lit anthologies for
only $14-99. The NY
Times bestsellers have
been lauded as classics
by librarians, educa-
tors and in the press.
On book tours, we’ve
witnessed that the series
is cherished, read and
reread by kids and their
parents. Comics by Kaz,
Kim Deitch, Ian Fal-
coner & David Sedaris,
Richard Sala & Lemony
Snicket — to name a few
Of the 33 A-list cartoon-
ists, writers and children’s-book artists play-
ing an A game in this collection — offer up
labors Of love in a very generous package.

“Privished”? I guess he wasn’t happy with the publicity or something?

This was horrifying. I’m glad no one gave this to me when I was little, because I wouldn’t have been able to be by myself for a long time afterwards. “Sick Comics for Parents Who Want Their Kids to be as Neurotic as They Are.” Thanks a lot, Spiegelman!

The artwork is gorgeous and the stories are a great deal of fun, and I am not sure that this book is entirely for five and up – as an adult, I had a great time with it.

This should be a sure hit with smart kids, and a quick way to be the coolest Aunt or Uncle. For adults it’s simply a collection of some fine artists being as witty, hip and subversive as ever.