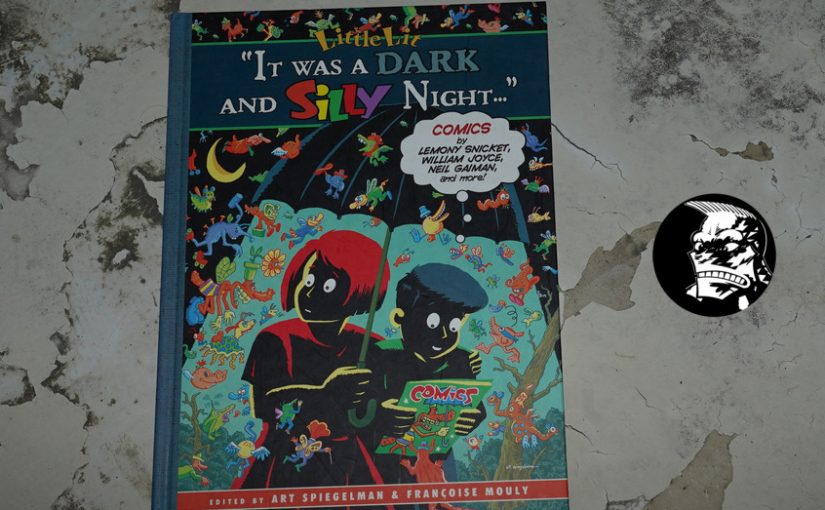 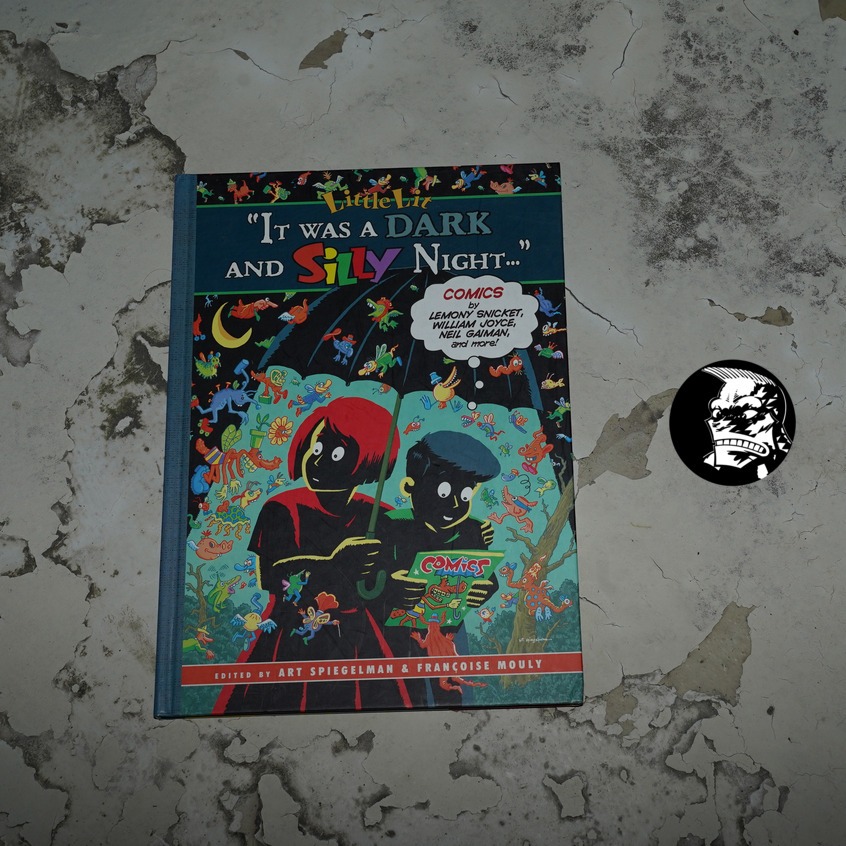 Little Lit: It Was a Dark and Silly Night edited by Art Spiegelman and Françoise Mouly (242x340mm)

This is the third and final book in this series, and it’s a bit shorter than the previous two: 48 pages instead of 64. 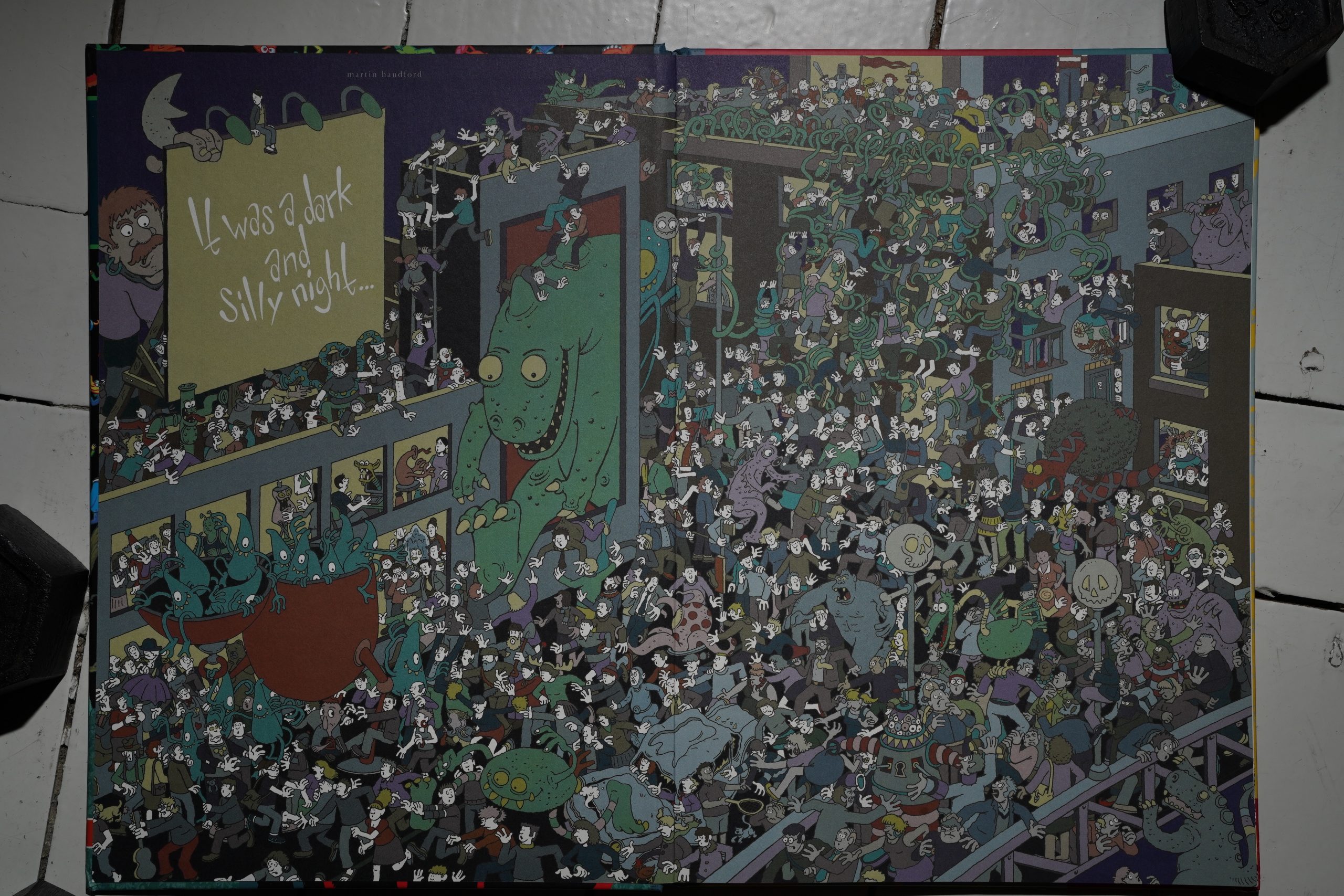 Martin Hanford does the endpapers, and they’re great. He’s the guy that does Where’s Waldo, as if you couldn’t tell. 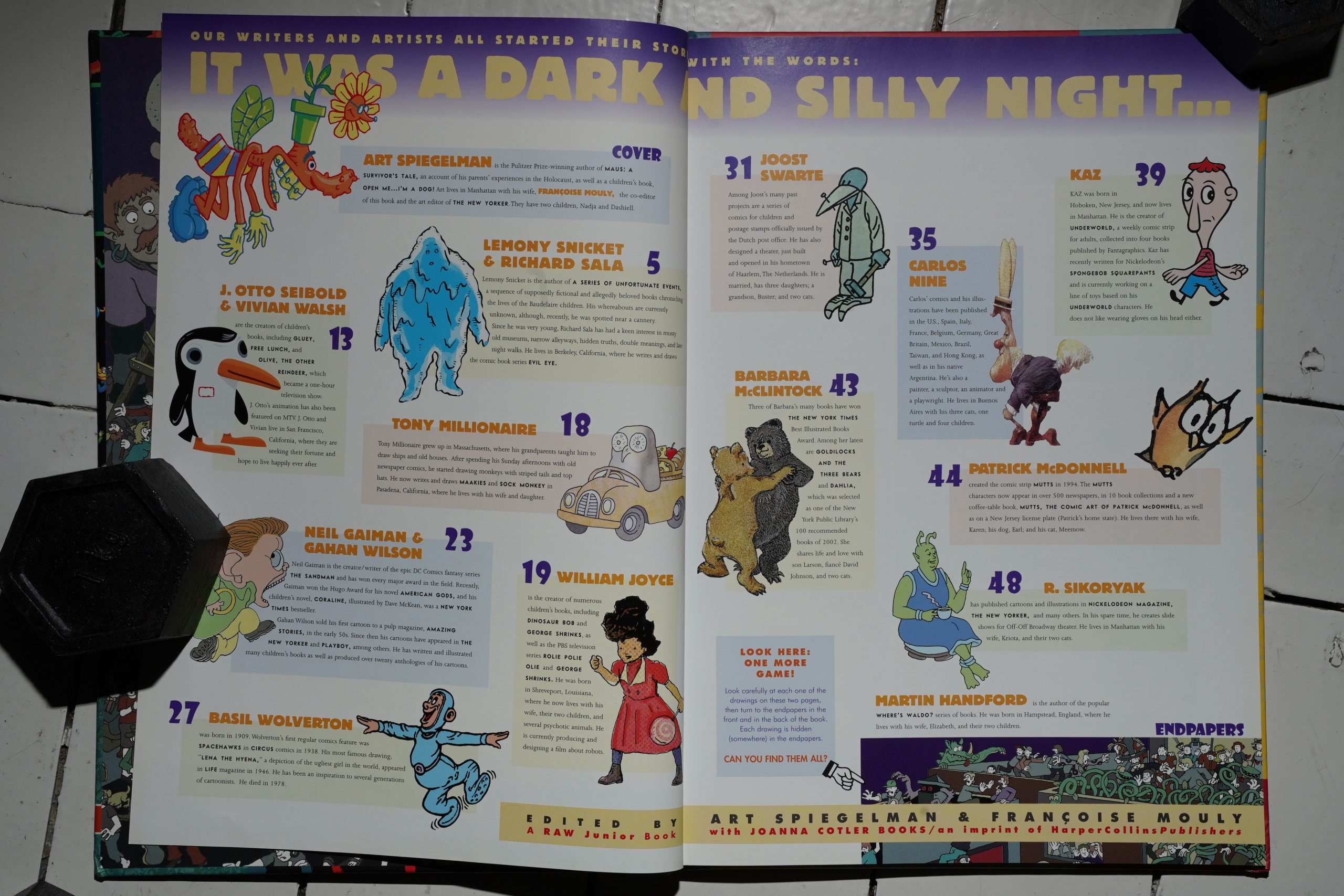 They’ve got some pretty big names in here, like Lemony Snicket and Neil Gaiman… but there’s a palpable atmosphere of just not caring that much any more. You could really feel the enthusiasm in the first two books, and now it’s just “eh”.

And the “theme” thing is back: All the stories start with “it was a dark and silly night”… 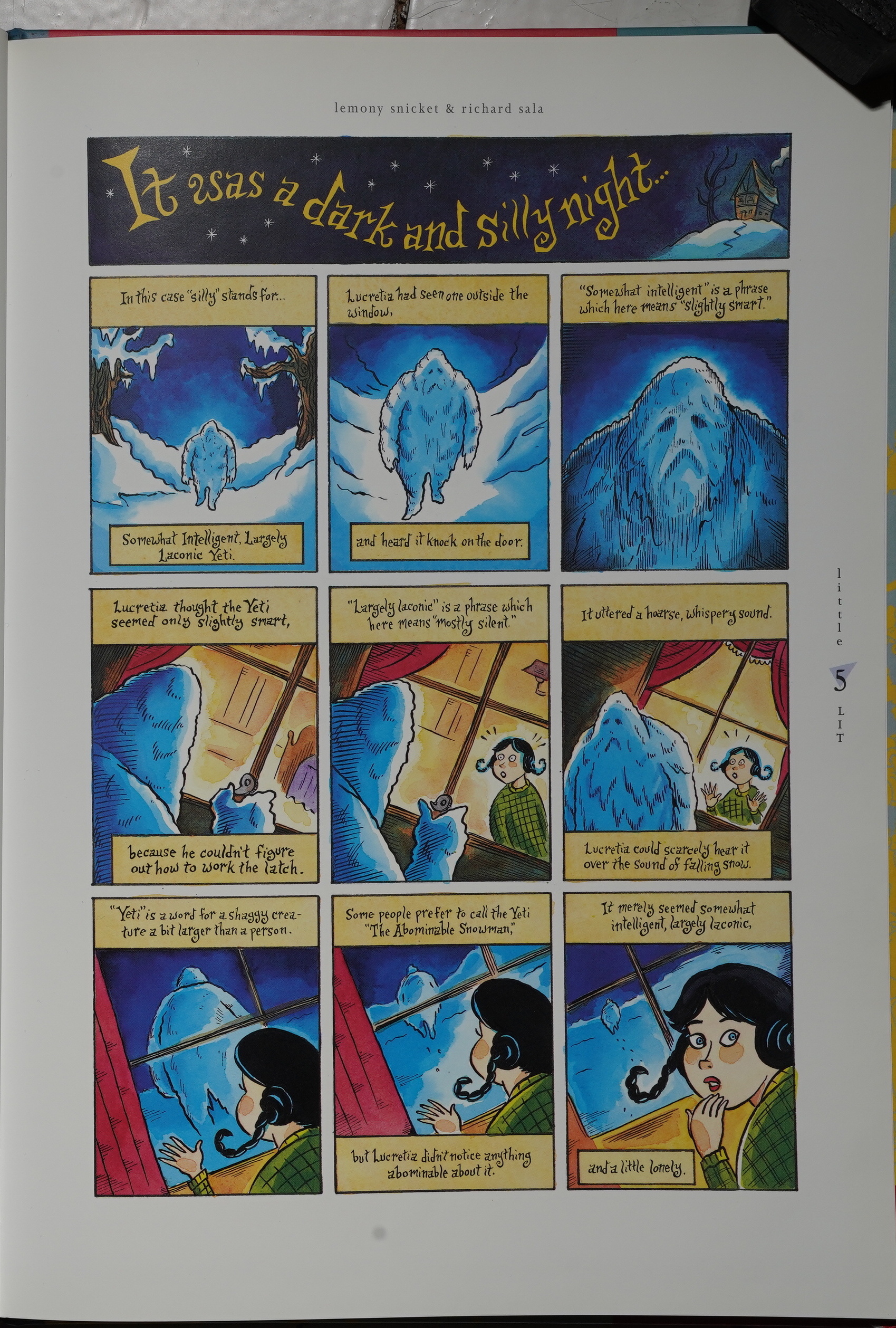 Spiegelman doesn’t contribute anything except the cover, for instance. Instead we open with Lemony Snicket and Richard Sala… and it may be the best piece in the entire series. It’s a proper story with twists and turns and an ending that you can ponder for a while. 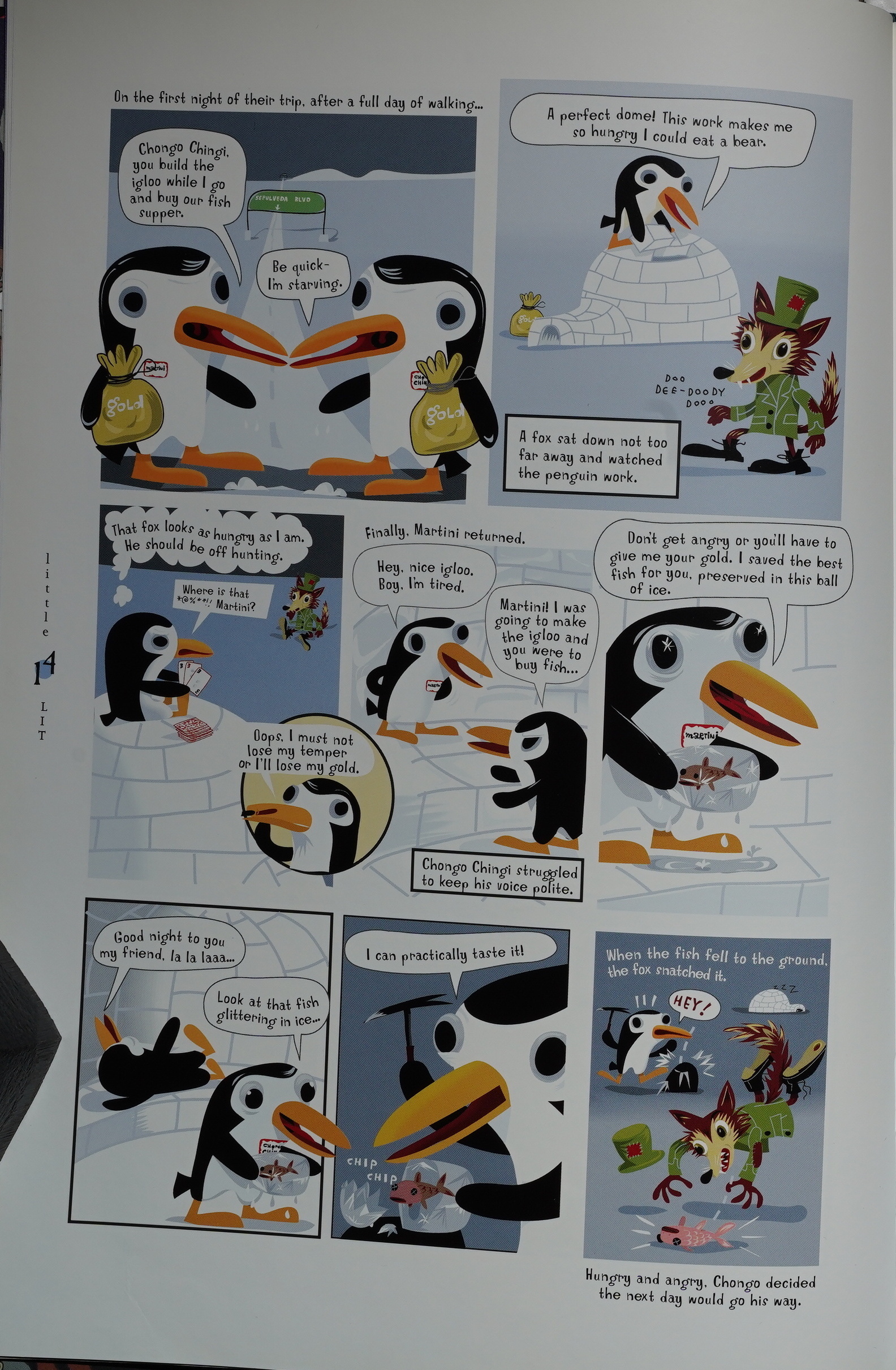 But it’s mostly things that are ineffably annoying. J. Otto Siebold and Vivian Walsh’s thing, for instance, was pretty painful to get through. The pages just have zero flow. 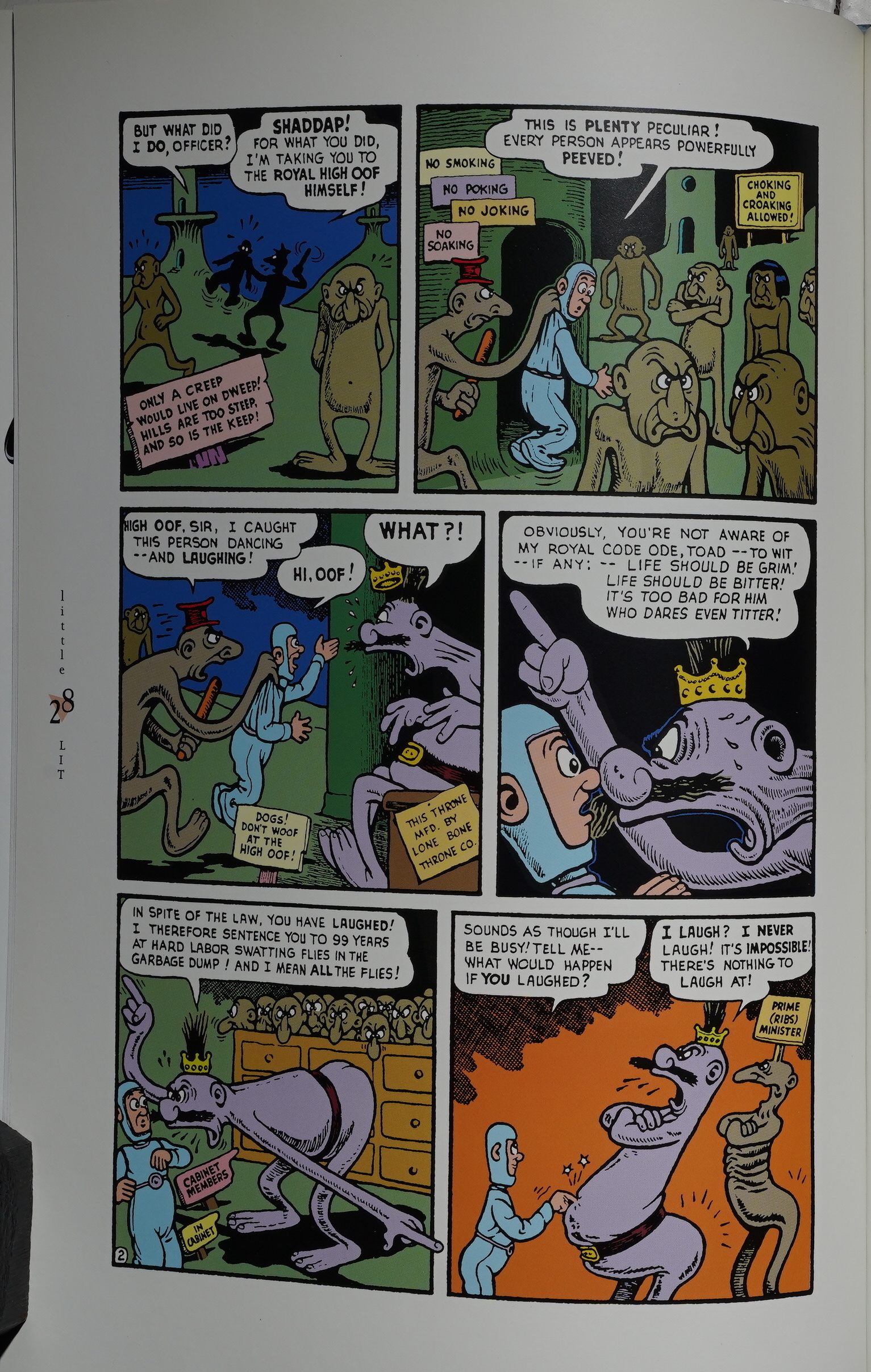 The first two books also reprinted older comics, but Basil Wolverton feels so out of step with the rest of the stuff in this book it’s not even funny. 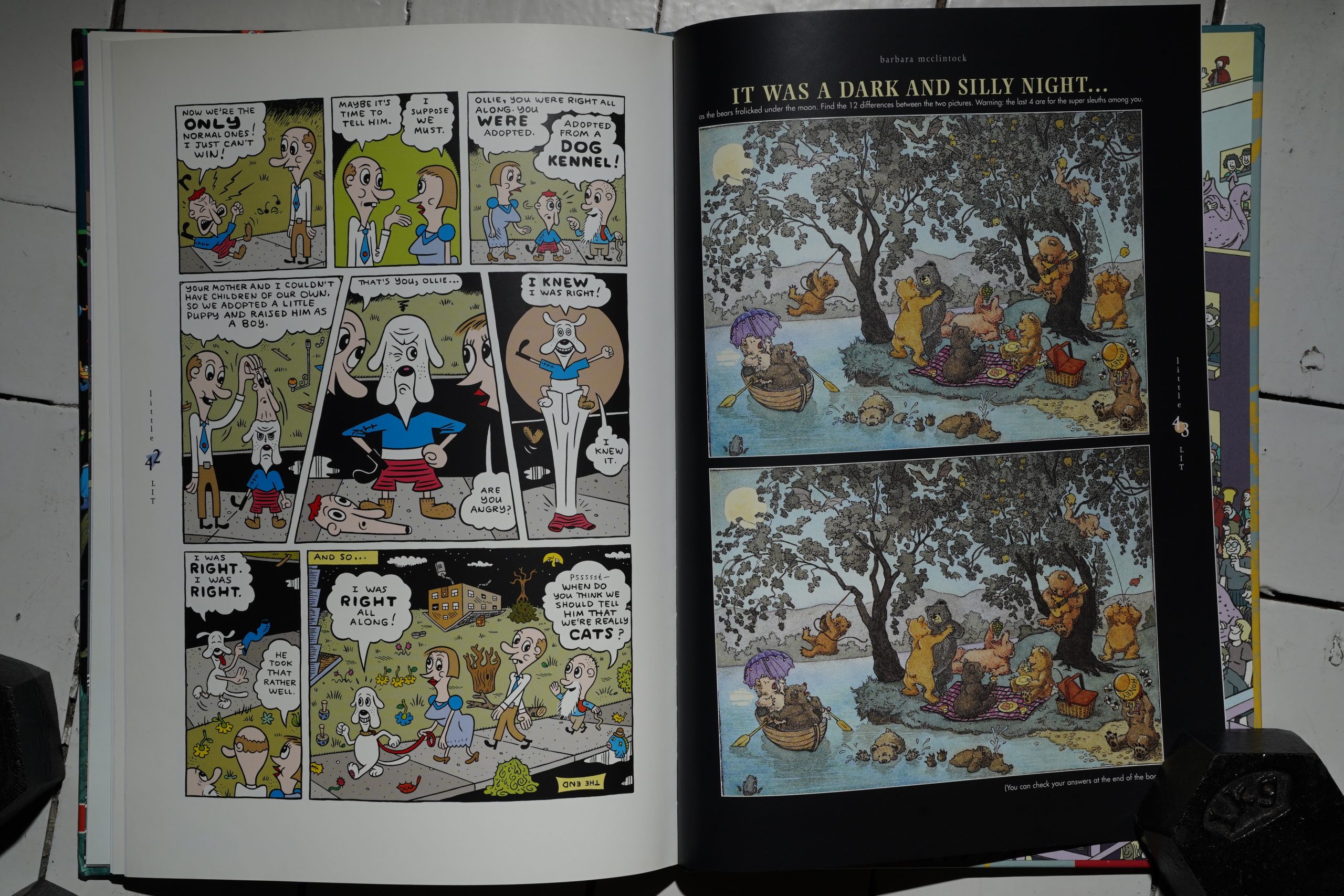 OK, the Kaz thing here was absolutely perfect, and there’s some good illustration here (Barbara McClintock), but the book feels aimless and doesn’t cohere in any way.

Nothing quite irks the critic like being
asked to render reasoned comment
on something that is both a) popular and
b) good. To pass a positive judgment on
something that everyone already deems to
be of high quality is to render oneself and
one’s decisive opinions useless. Most practi-
tioners of the reviewing arts would prefer to
illuminate their critical electron microscope
in order to detect flaws in what, to the
naked eye, might appear to be perfect.
Alternatively, one can increase one’s scope
to such fantastical proportions that, in the
context of political change, human evolu-
tion or continental drift, one can dismiss
the artistic endeavors in question as piffling
irrelevancies. Reliable as these approaches
are, they still mark the critic as something
of a cad. Barring them, one has but two
other courses available: to transform the
review into an autobiographical digression
that barely touches on the piece under con-
sideration, or to review something else
entirely and tell remonstrating editor
that he was unclear about the assignment.

Despite some 15
years of authorship
within these pages,
I can do little more
than applaud this
volume, and the
two that preceded
it. These are good
books, and those
with ready money
should purchase
them.
My long career in the paid-by-the-
word trade has taught me that more will be
required here. first, it should be noted that
the Little Lit series addresses a problem
much mooted in this and sundry other
comics-related journals, most of them
defunct, which is that children no longer
read comics. Volumes such as these, crafted
to appeal to parents, designed to look like
children’s books and invested With enough
quality to overcome the prejudices Of the
public, represent a positive step. Ironically,
whereas comics were once considered the
first rung on the ladder to real reading, one
suspects that Little Lit appeals to children
who are already avid readers, and demon-
strates to them that comics need not reverse
the literacy gains they have already made. It
is also ironic that this mission of wooing
children back to comics should fall to so
many artists whose principal oeuvre in the
medium is decidedly not for children.

As for the stories contained within
this volume, I must express a particular
fondness for the collaborations between
Snicket and Sala, and between Wilson
and Neil Gairnan. There is considerably
more silly than dark offered throughout
this book, and the stories by these gentle-
men most agreeably combine these two
eponymous elements.

The Snicket/Sala story was nominated for Best Short Story in the 2004 Eisners.