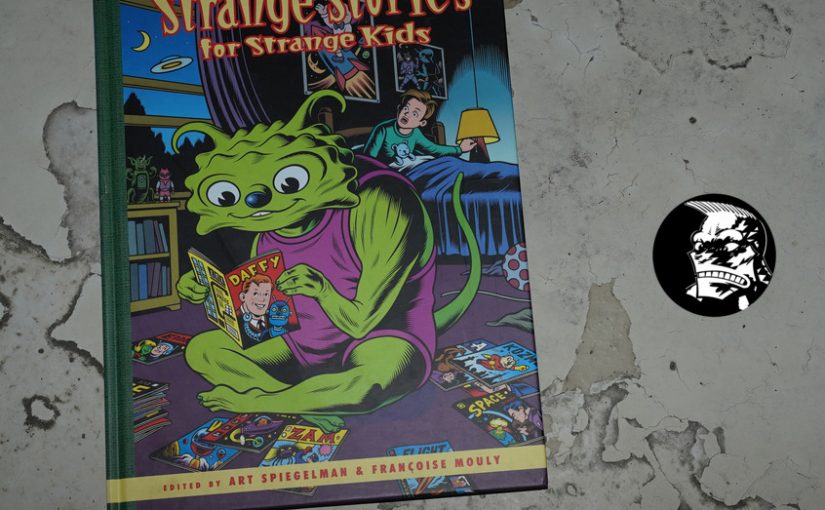 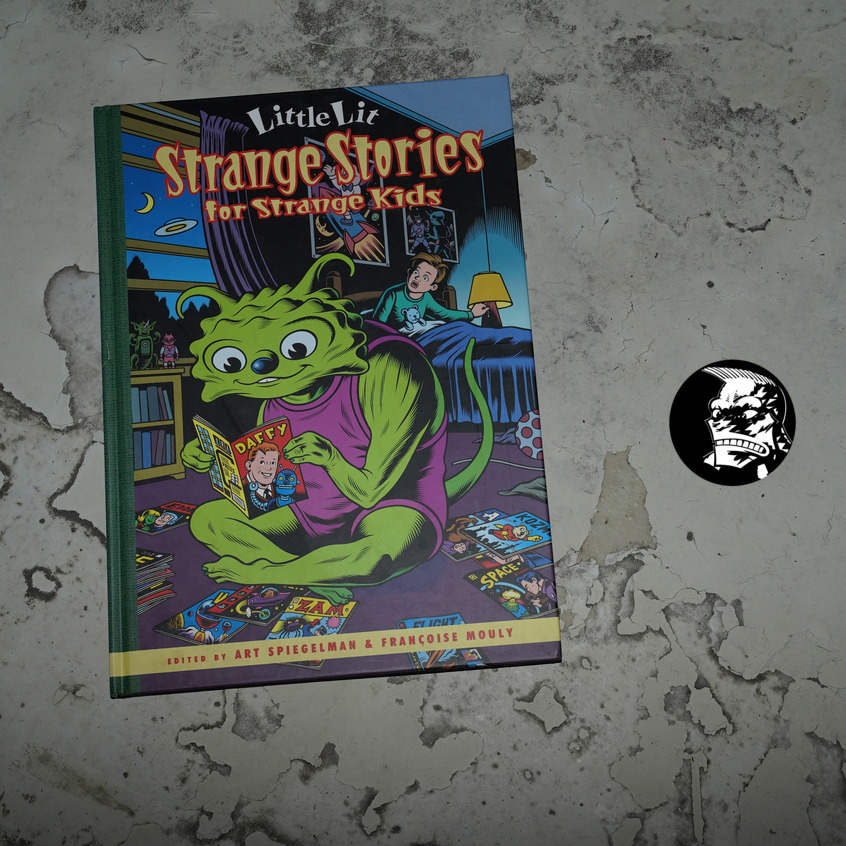 The first Little Lit book wasn’t… very good, and this one doesn’t even have Chip Kidd as a co-designer. So let’s have a look. 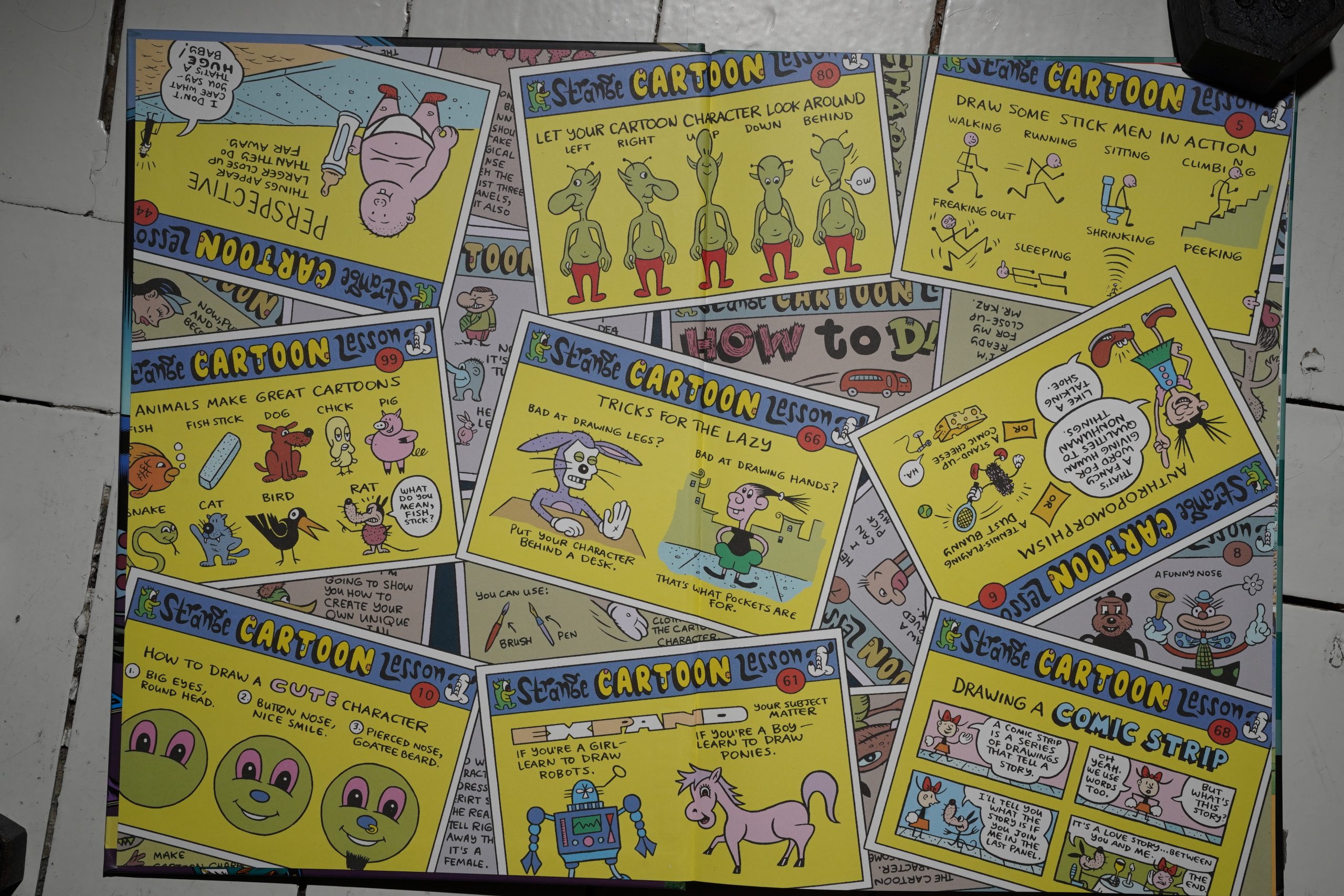 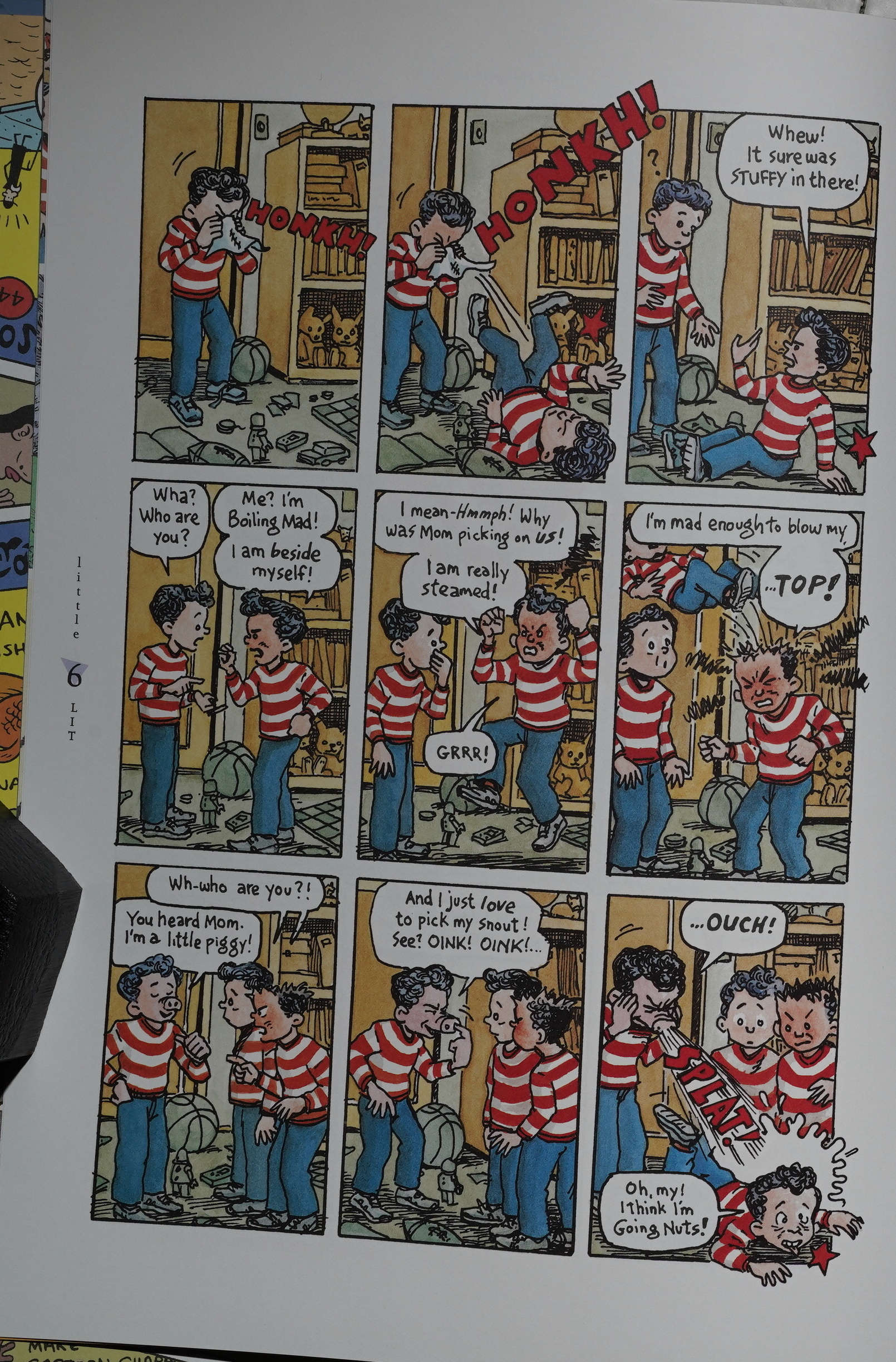 That’s not bad, either. (Art Spiegelman.) 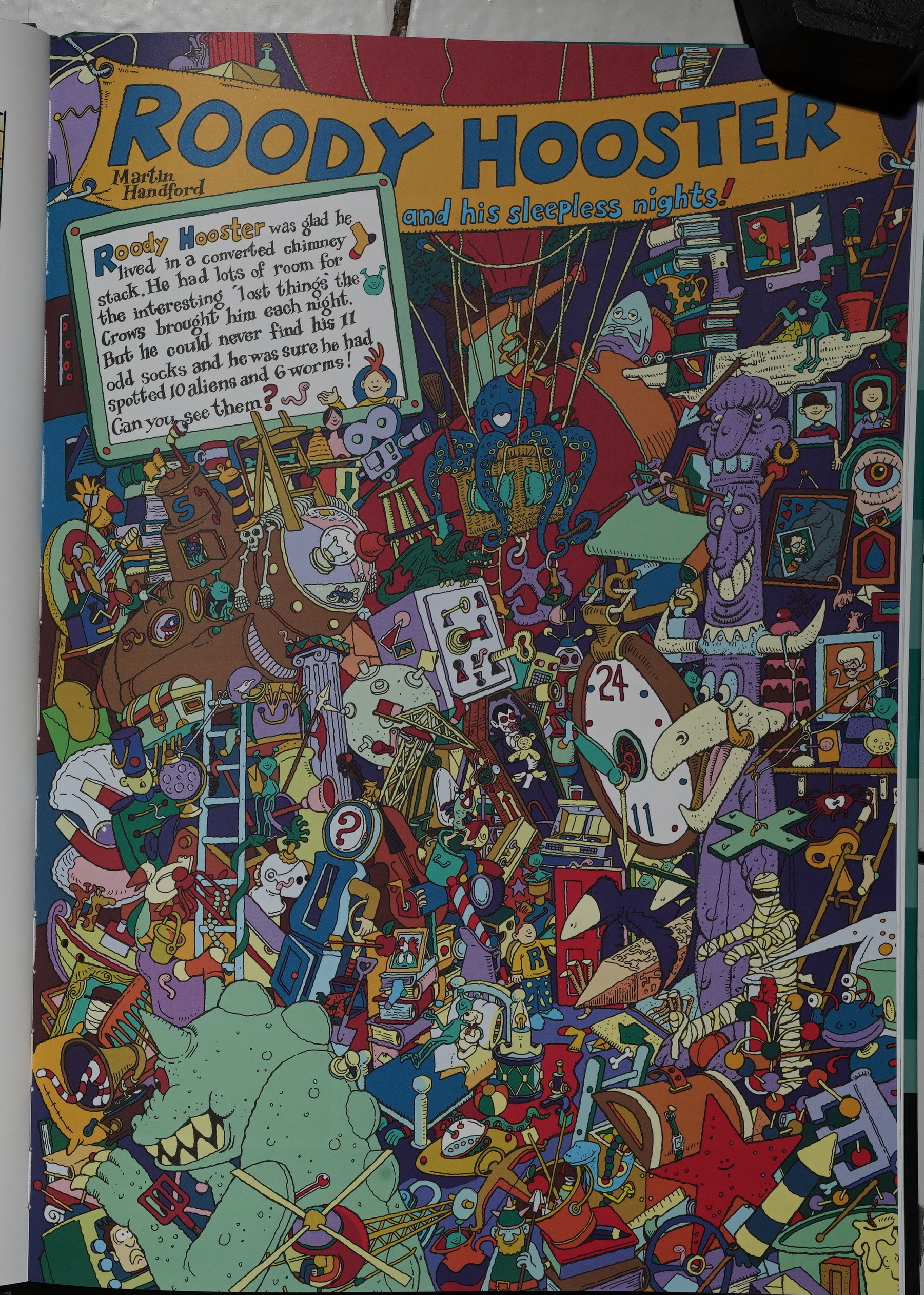 There were quite a few of these activities pages in the first book, but only one here. (Martin Handford.) 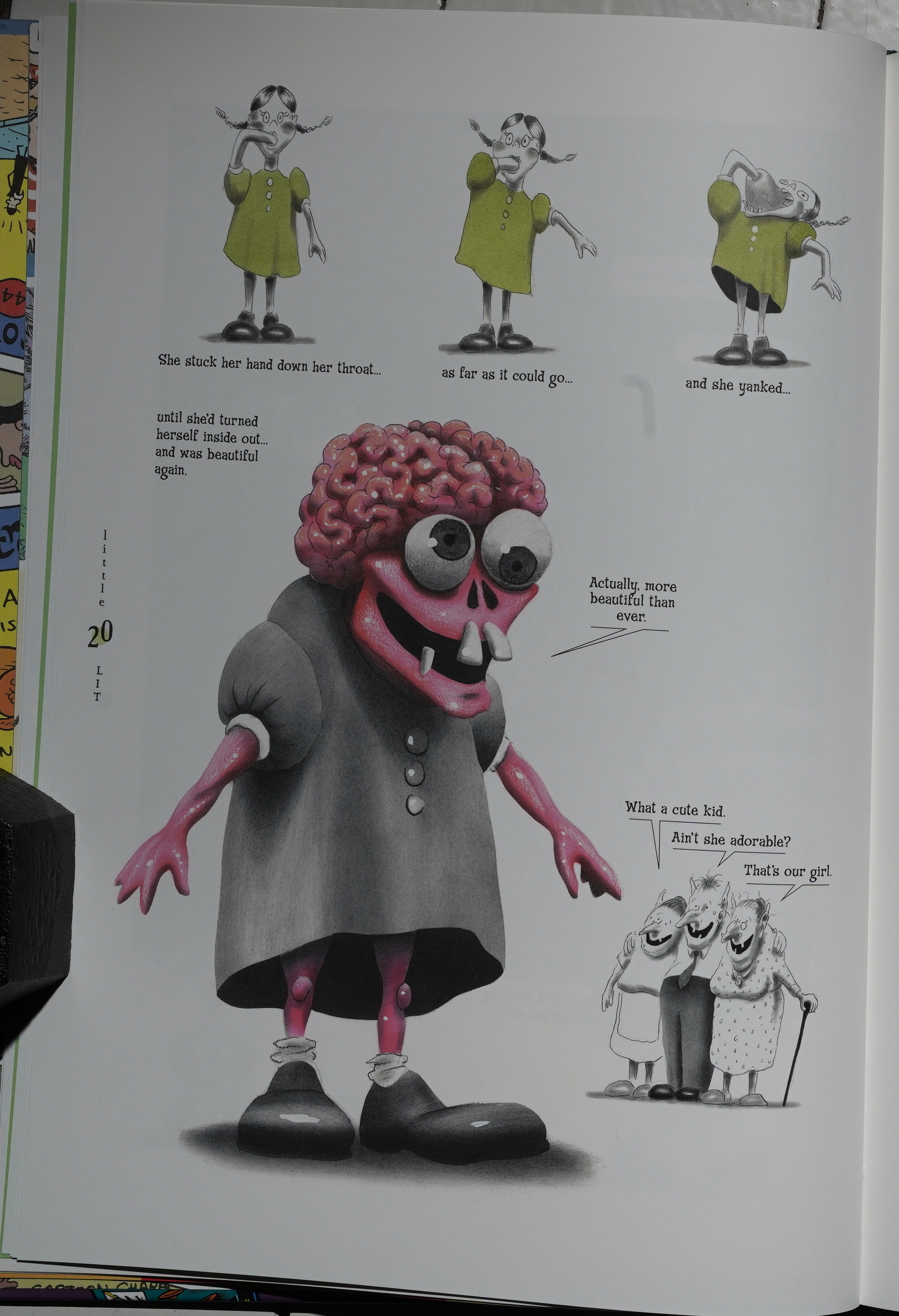 OK, this is much better than the first book. (Ian Falconer and David Sedaris.) The pieces here are generally longer, more inventive, and things that I can see actual kids would actually enjoy. And that makes for a better experience for us childish adults, too.

Perhaps it was the fairy tale theme that messed up the first book? 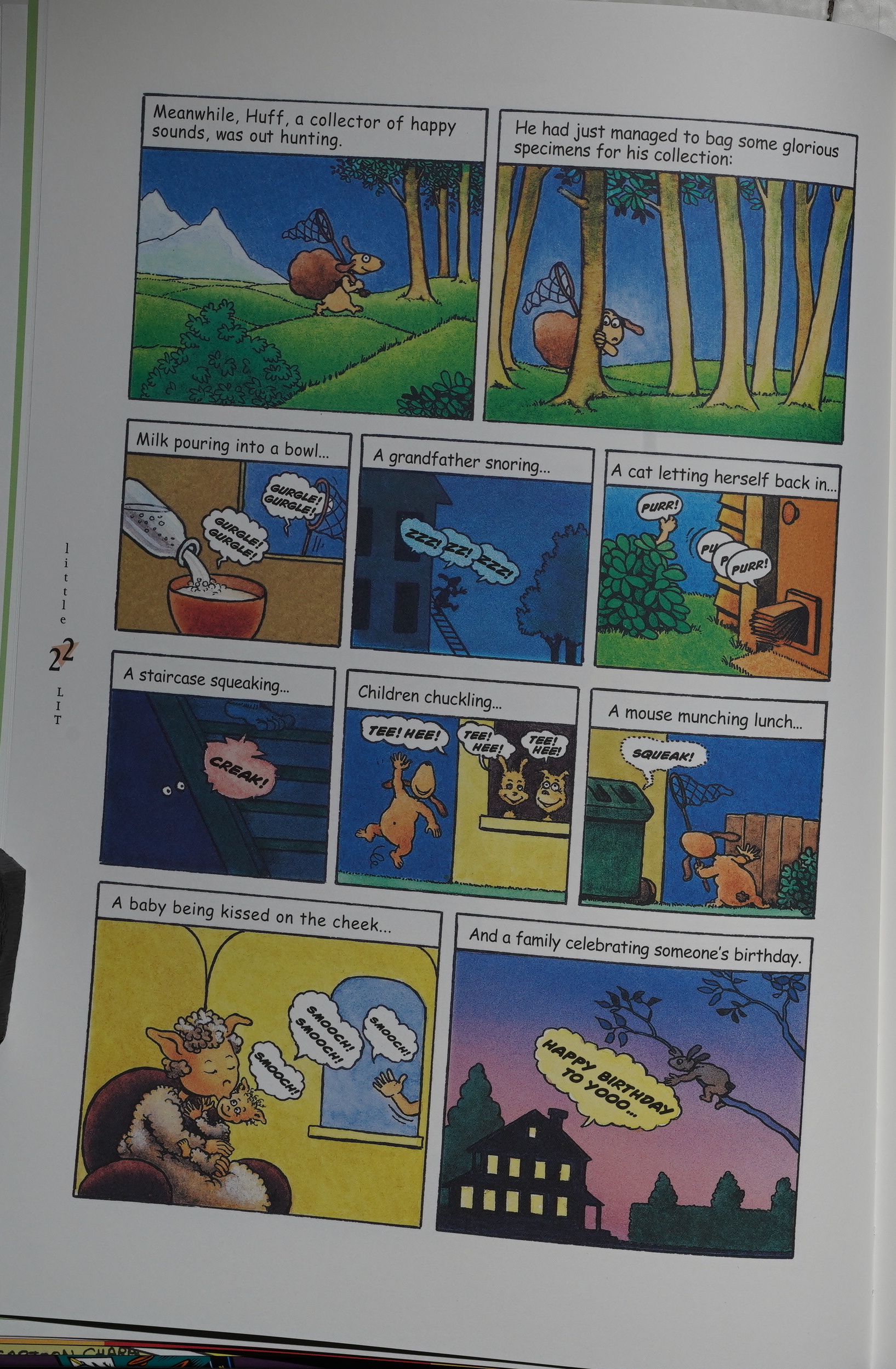 It was difficult to find anything in the first book that actually worked well, but basically everything here’s either fine or very good indeed. (Claude Ponti.) There’s a great variety in the approaches, from the formal play here… 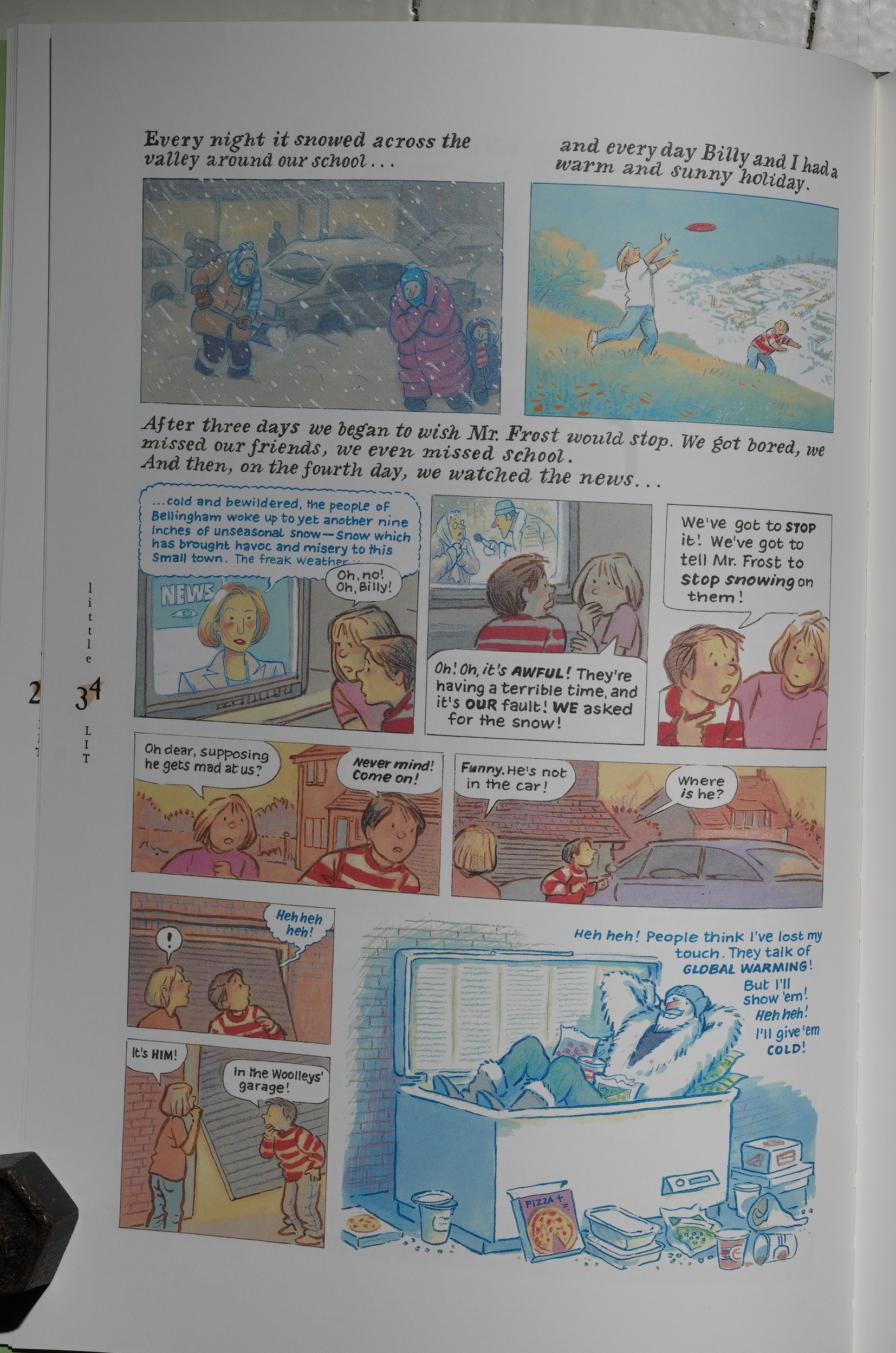 … to the straightforward storytelling in Posy Simmond’s story. 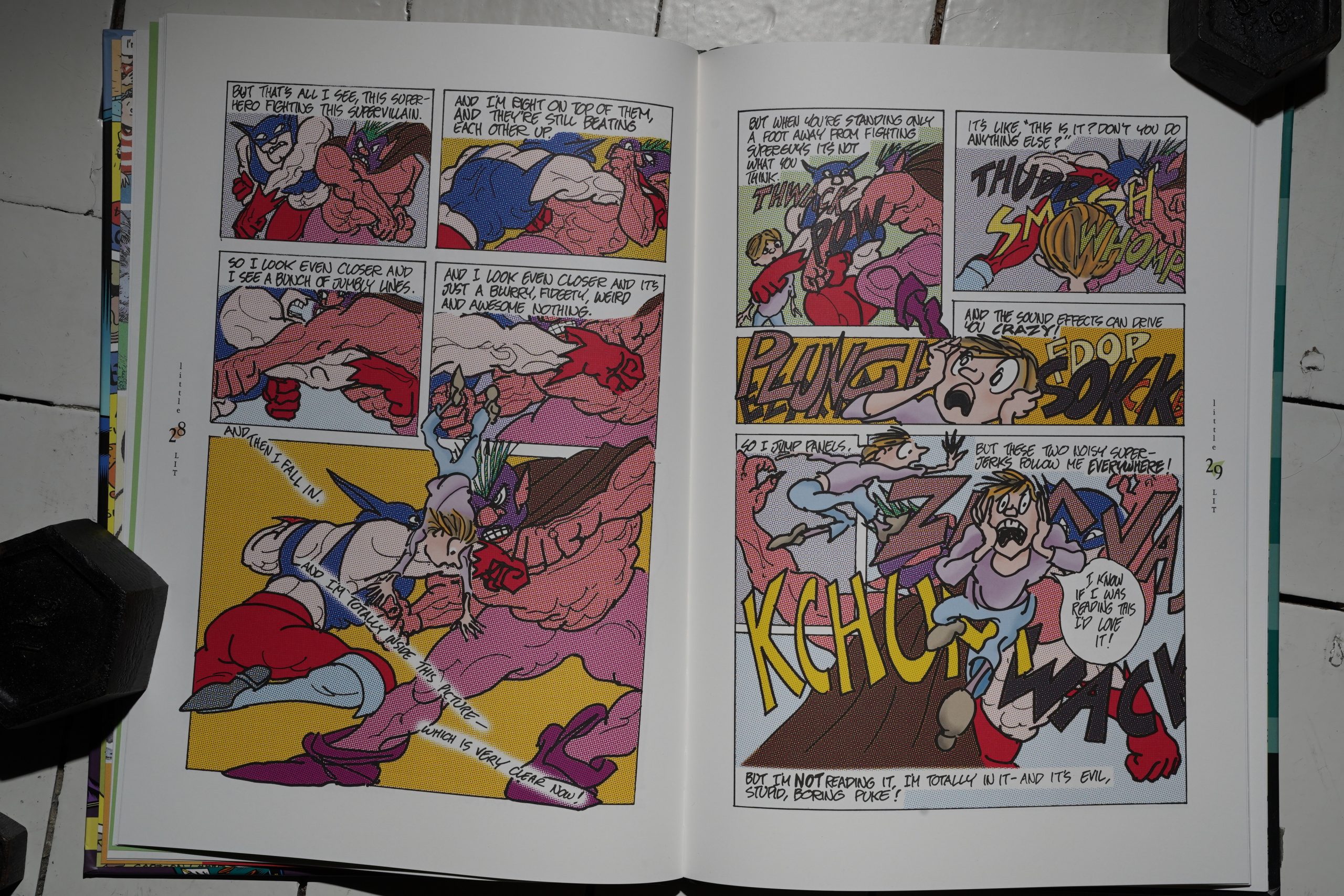 The book reprints a bunch of oldee things from famous illustrators, like Jules Feiffer here, as well as Maurice Sendak and Crockett Johnson. I guess these are just things Spiegelman really enjoyed… but they’re not the strongest pieces in the book. 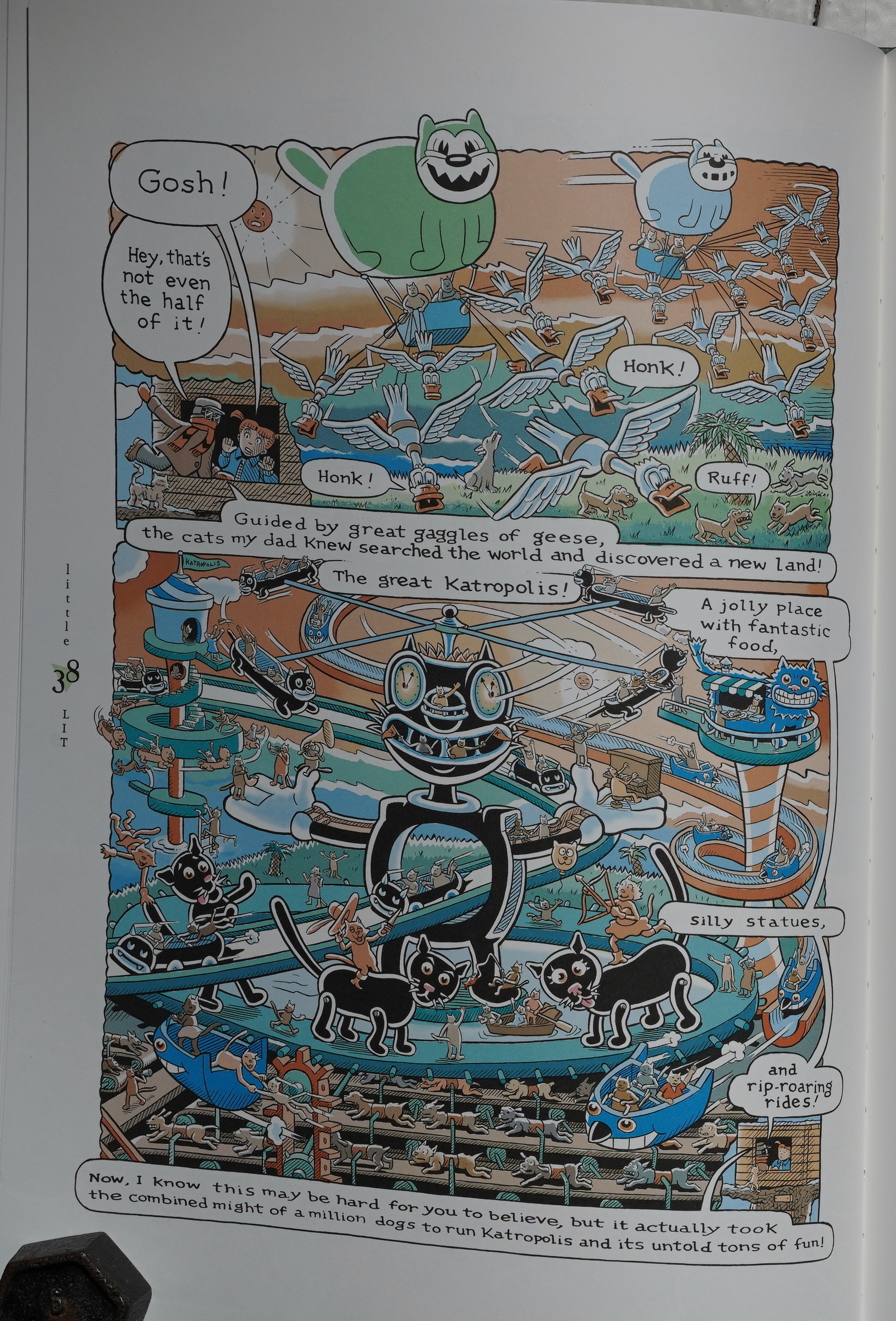 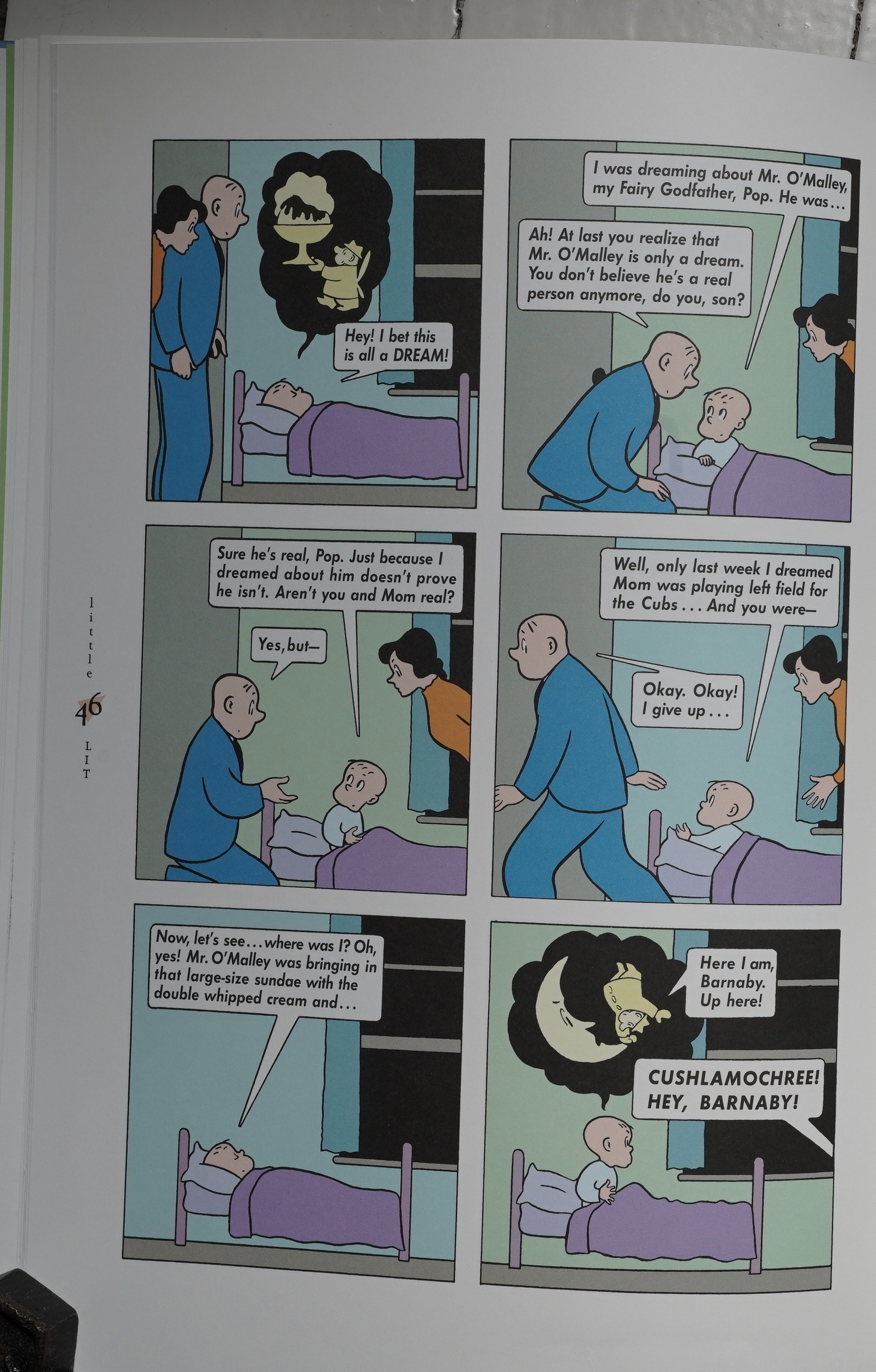 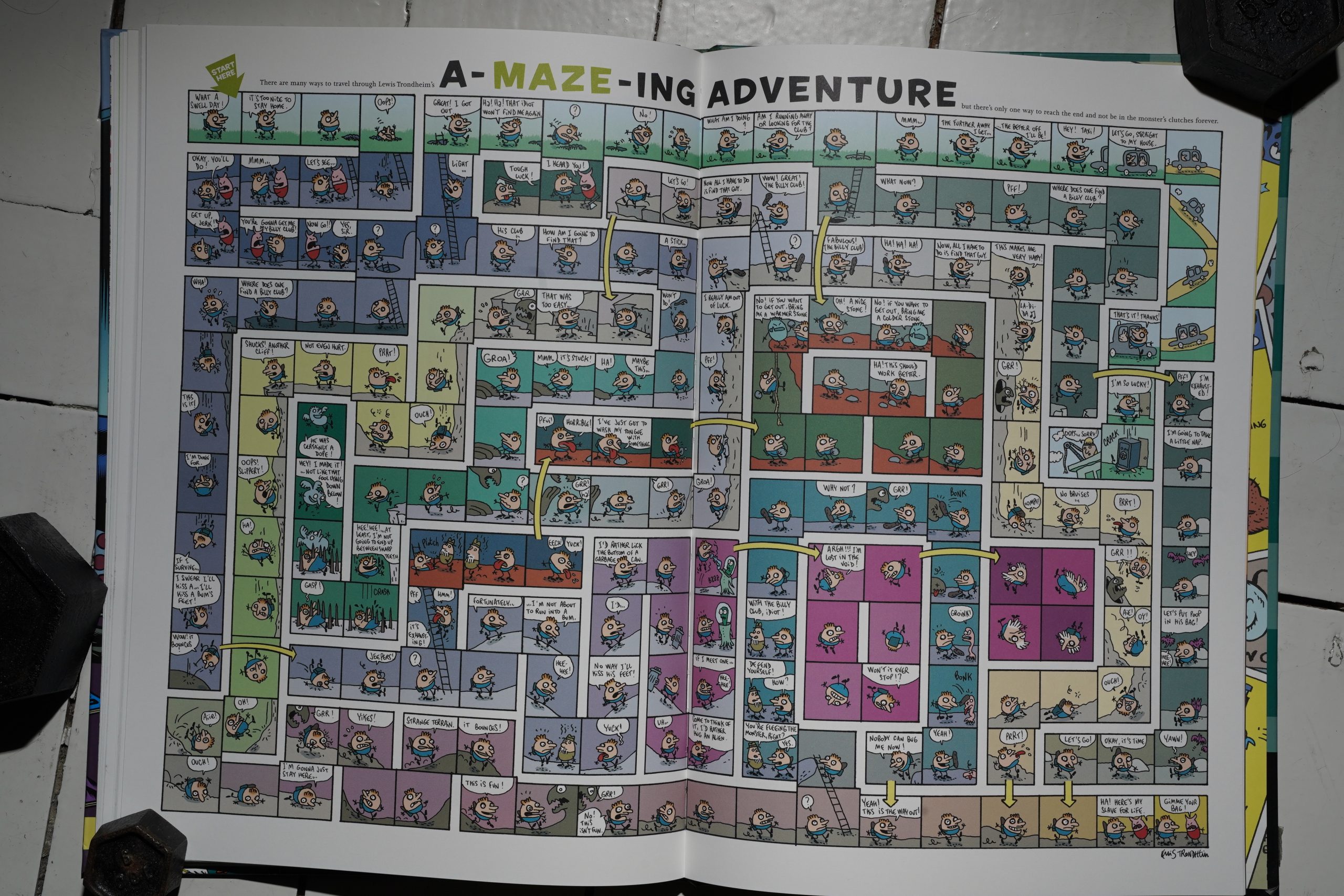 Lewis Trondheim does a very playful thing where you have to choose your way among branches. 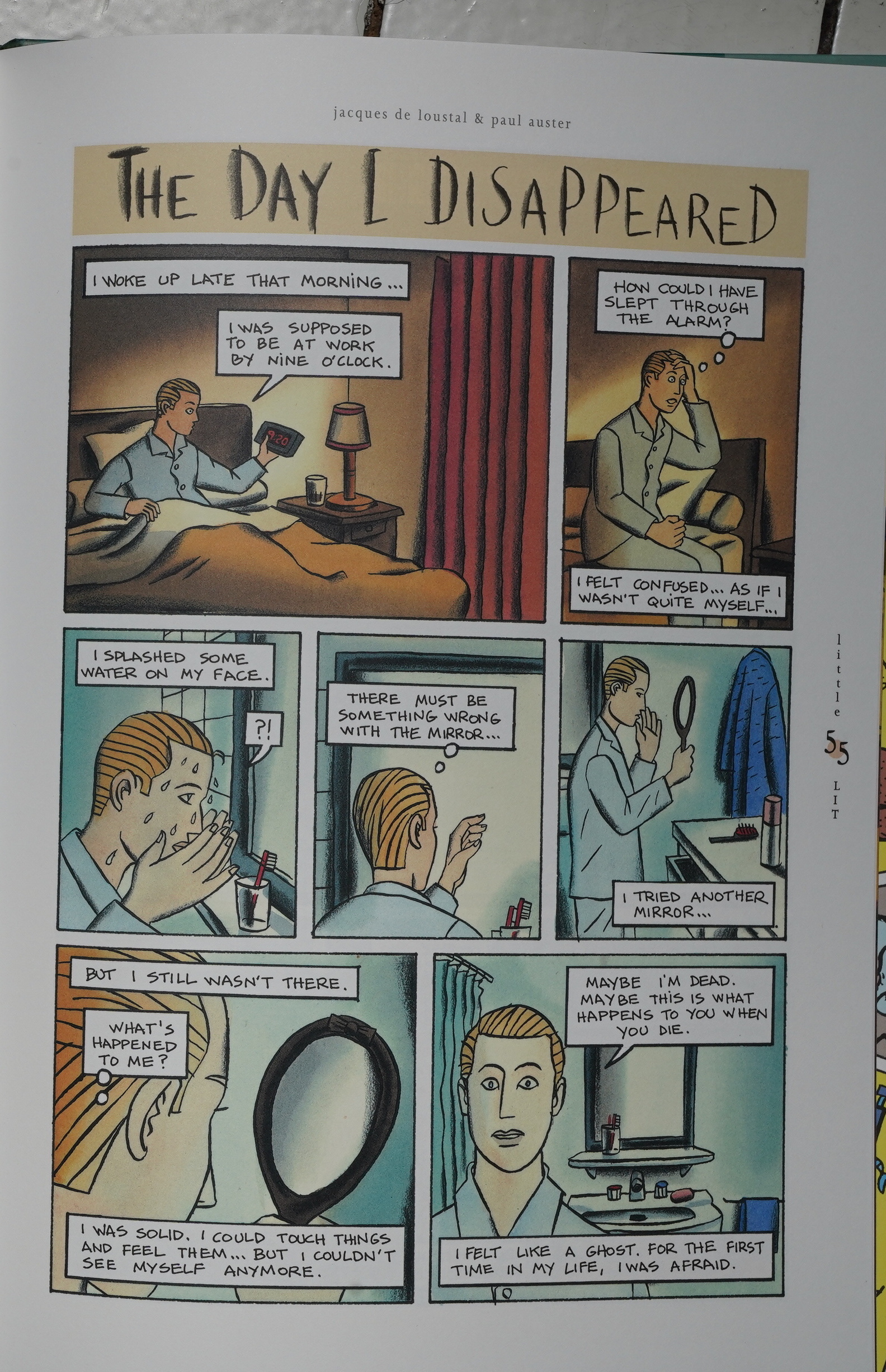 And finally, Loustal and Paul Auster does… er… uhm… Well, it’s a good story, but it feels very out of place in this book.

So! That was a really good book, which I didn’t expect after suffering through the first one.

With the success of the first Little Lit
volume, immaculate reputations, money,
a good publisher and a sizeable contact
list, Spiegelman and Mouly had one
potential stumbling block when it came
to editing the second volume of their
children’s comics anthology. The ability
to truly “edit,” to chop and to cut and to
refuse without severely offending. In
essence, do you ask Paul Auster and
Jacques de [nustal to contribute some-
thing and proceed to tell them that their
story is average and really not a very good
children’s story? Do you ask an old
friend, a distant contact or an artist
whose merits equal or exceed your own
to remove, redraw or otherwise com-
pletely alter a story which he has worked
long and hard on? Was it within the abil-
ities of Spiegelman and Mouly to edit,
strongly direct and advise on their con-
tributor’s works? Did they even the
chance to exercise this ability? I
know. If they have had this opportunity,
then their collective “taste” is wholly cul-
pable in the debacle that is L;ttle Lit:
Strange Stories for Strange Kids. If not,
they have knowingly succumbed to the
pitfalls of the “strong” contributor list.
The latter is the lesser of the two evils but
the editors remain guilty of producing a
very mediocre book in what can only be
described as the optimum conditions.
Let us begin with Spiegelman’s story,
“The Several Selves of Shelby Sheldrake, ”
a clear indicator that he is ill-suited to the
production of children’s comics.

Any semblance Of an engaging plot is
suffocated by Spiegelman’s rough, unfin-
ished line and flat, frigid narration. His
desire to amuse his young readers With a
repetitive, claustrophobic explosion Of
imagery is both ill-judged and tedious.
Our eyes glaze over with disinterest upon
encountering each monotonous page of
this four-page offering.
Where Open Me — A Dog suc-
ceeded to a certain extent as an amusing
novelty book, Spiegelman’s children’s
comics are hampered by overportentous-
ness and his unwillingness or inability to
change his drawing style to suit his pur-
pose. His story in the first Little Lit
(“Prince Rooster”), for example, replaced
fun and excitement With unleavened les-
sons for the day. One does not question
the right of an editor to include his own
stories in his own book, but I do wonder
what hidden forces compelled him to
place his middling stories at the forefront
Of his collections not once but twice. The
utter lack of insight in this respect from
someone so experienced is astonishing.
More importantly, Spiegelman
should eradicate his delusions of
grandeur about producing comics for
children in a day and age when no one is
producing comics for children.
Spiegelman and Mouly appear to have so
distanced themselves from comics in the
intervening years since the publications
Of Raw and Maus that they no longer
have a feeling for or knowledge of the
various delightful children’s comics that
have surfaced in recent years.
As if to prove my point, the pair of
tales that bookend Little Lit II are an
example of the worst kind of children’s
comics. The calamitous closing tale
(“The Day Disappeared”) is by two
otherwise exceptional talents, Paul
Auster and Jacques de Loustal. It is a
metaphorical tale of how a man loses and
then finds and saves himself in the course
of a day. Auster stubbornly refuses to
abandon his roots in existentialism and
adult fables for the sake Of a “mere” chil-
dren’s comic and Loustal, for his part,
struggles gamely along, creating art per-
fectly compatible with Auster’s very dour
purpose. In truth, Loustal cannot be
blamed for his writer’s ultimately disas-
trous foray into the realm Of the gravity
laden children’s Story. As a fairy tale for
adults, “The Day I Disappeared” is
remarkably shallow compared to any of
Auster’s existentialist tales in The New
York Trilogy and yet almost certainly
beyond the comprehension of young
children. It lacks the swift movement of
plot requisite of childretfi stories and fails
at every turn to produce the careful and
uncluttered delineation of emotions,
replacing this with drawn out, silent,
morose exposition.
In truth, the distinguished contribu-
tor list of Little Lit II is nothing more than
a mirage; a whispered hope and a ceaseless
dirge that masks the tepid quality of the
book. Jules Feiffer, a wonderful writer and
artist, produces a story that I would not
put beyond the worst Of Mantel hacks.
One does not suspect some sudden emas-
culation of his artistic prowess but a fail-
ure to undertake a proper and recent
review of children’s comics and literature.
“Trapped in a Comic Book” is about a
child who encounters and annoys a car-
toonist only to be sucked into the very
comic the cartoonist is drawing. Feiffer
adopts a tonal dot pattern to indicate that
we are deep within a comic page, blowing
up the printing deficiencies of the four-
color world of comics. It is a deadly com-
mon trick — which is not a criticism in
itself, since it •would be too much to ask
every artist to create elements of daring
innovation every time they produce a
new comic. Yet Feiffer’s art is inadequate
to the job Of conveying the fantasy he
means to communicate. His harried
linework (so essential to the meter Of his
cartoon strips) has a severe distancing
effect here in view Of its lack Of clarity
both narratively and figuratively. It is a
defect further exacerbated by the flavor-
less narration ofa trite plot.

Some of the other editorial choices
also help to lift Little Lit II beyond the
zone Of death. Richard Maguire produces
a technically interesting “Can You find”
activity page filled with twisted shapes
and unusual perspectives. Lewis
Trondheimk amusing cartoon maze is a
few minutes of harmless entertainment
Which is bound to generate more neural
connections in the minds Of young chil-
dren, and Roca makes a good, if
somewhat traditional, account Of himself
With a surreal “Can you Spot the
Mistakes” page. Claude ponti also deliv-
ers the goods in his pleasantly related
story of “The Little House That Ran
Away From Home,” a tale filled with
touching pictures ofa house weeping and
other worldly Dr. Seuss-like creatures
collecting “happy sounds” and “smoke-
plumes-that-rise-in-the-distance. ” To cap
all this Off there is a well known intro-
ductory tale from Barnaby which appears
to be slightly edited When compared to
the first Barnaby collection published by
Henry Holt and Company.
Only time will tell if the series has
sufficient weight to generate the clouds
of nostalgia that inform an appreciation
of a Barks Duck story, a Stanley Little
Lulu or a Lee and Kirby story from the
Silver Age. I would suggest, however,
that one hardly needs to journey to the
island Of Patmos to discern that Little Lit
Will not be looked upon (if at all) With
kindness in ten years’ time.
Children are not a very demanding
audience but they are terribly exacting in
their requirements. In the case Of Little Lit,
Spiegelman and Mouly have subscribed to
the ultimately false and Kitile values of
choosing the most “name” artists they
could muster in order to produce a chil-
drenk book Which is, simply put, merely
lukewarm water meant to be spat out.
They have declined to look beyond an
artises past laurels and hence blinded
themselves to those with less prestige but
proven abilities in a combination of both
comics narrative and the childrer* story.
This is ultimately the path of safety. There
is a sense of security inherent in such a
position; a feeling of warmth and comfort
in the nebulous cloud of quality inherent
in the flock of “names” surrounding your
project. But it is not necessarily the path
to artistic success. With all the resources
eminently at Spiegelmank and Moulis
disposal, no excuses are sufficient to justi-
6′ such a failure.