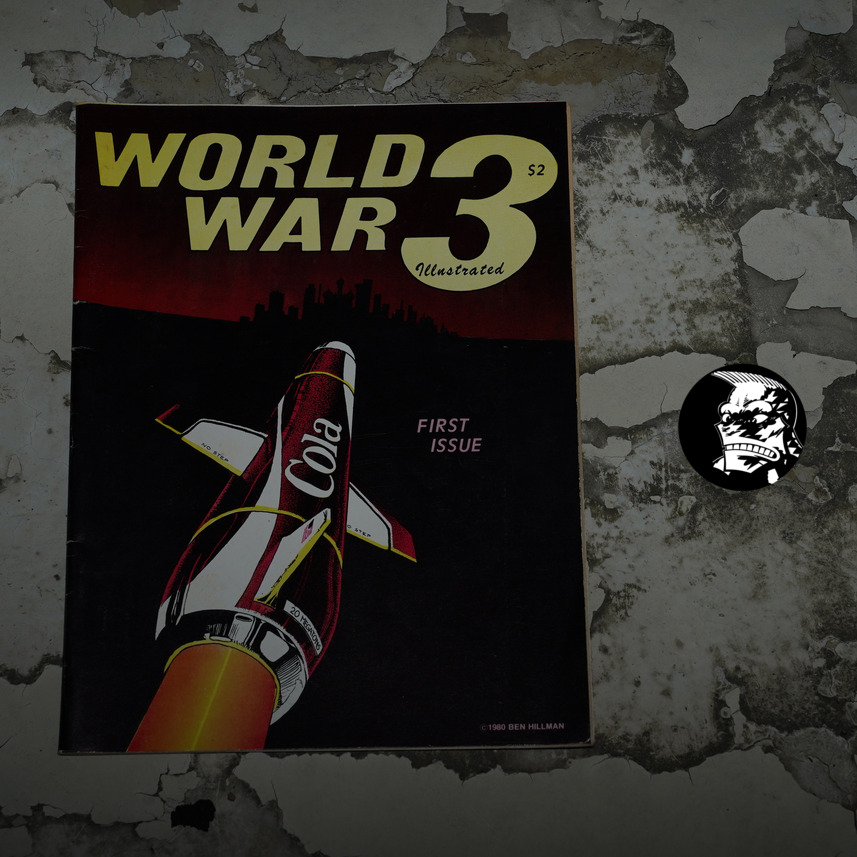 When starting this Raw-focused blog series, I wondered whether I should do some World War 3 Illustrated, too — it was another anthology started in New York around the same time, and with as much claim on the phrase “punk comix” than Raw has, really… But it’s virtually impossible to find any of the early issues. It’s not that they’re very expensive when they do pop up on ebay, but… they never do! It took me half a year to score this issue.

What about the traditional comics sellers? 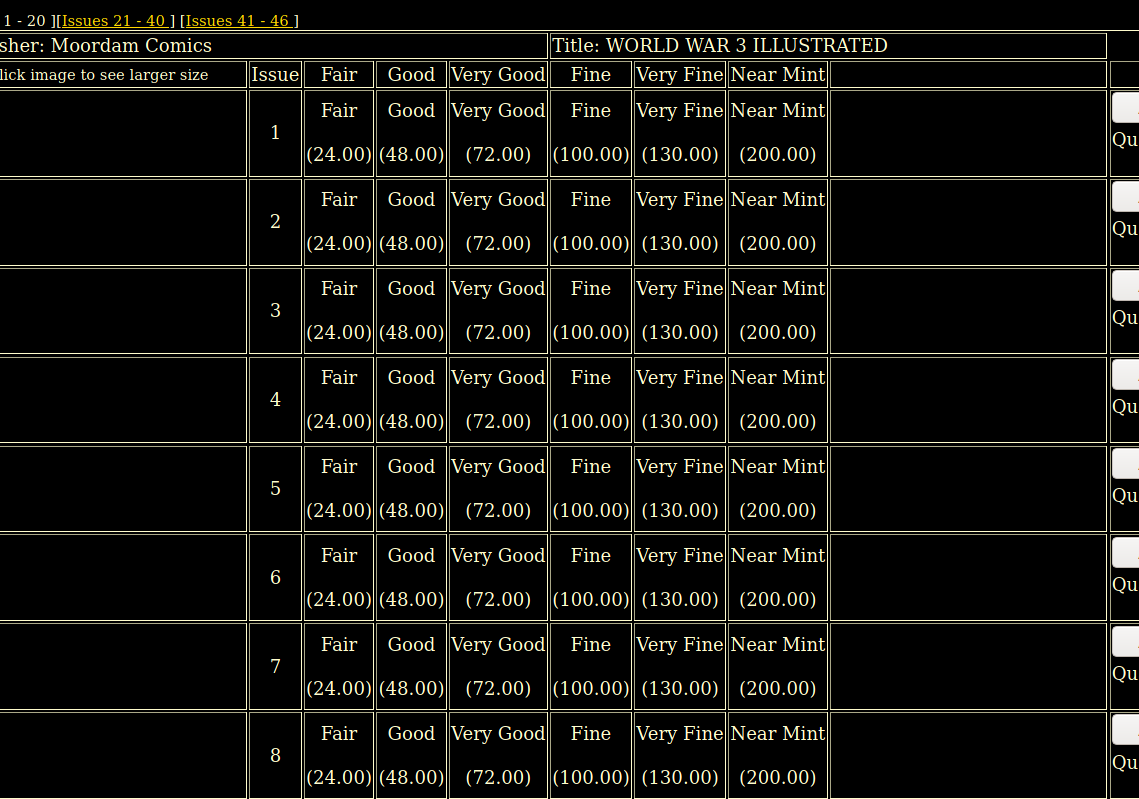 I think that grid from Mile High Comics means that they never had it.

So World War 3 Illustrated has existed in a world separate from the comics and traditional bookstore worlds — I’m guessing it’s been distributed in anarchist bookstores and stuff? And then people just threw them away? It’s not a “precious” art object like Raw Magazine, that’s for sure. 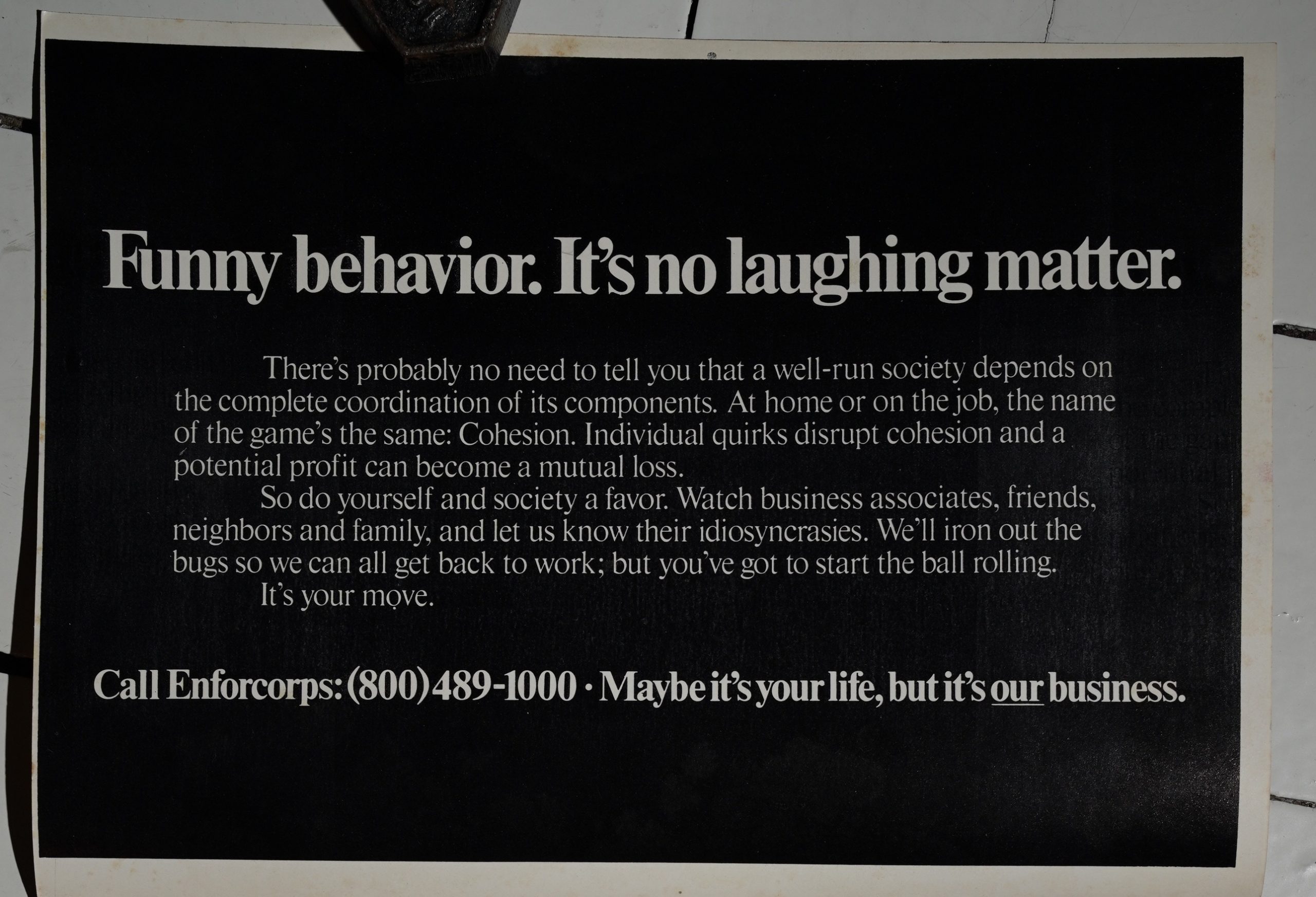 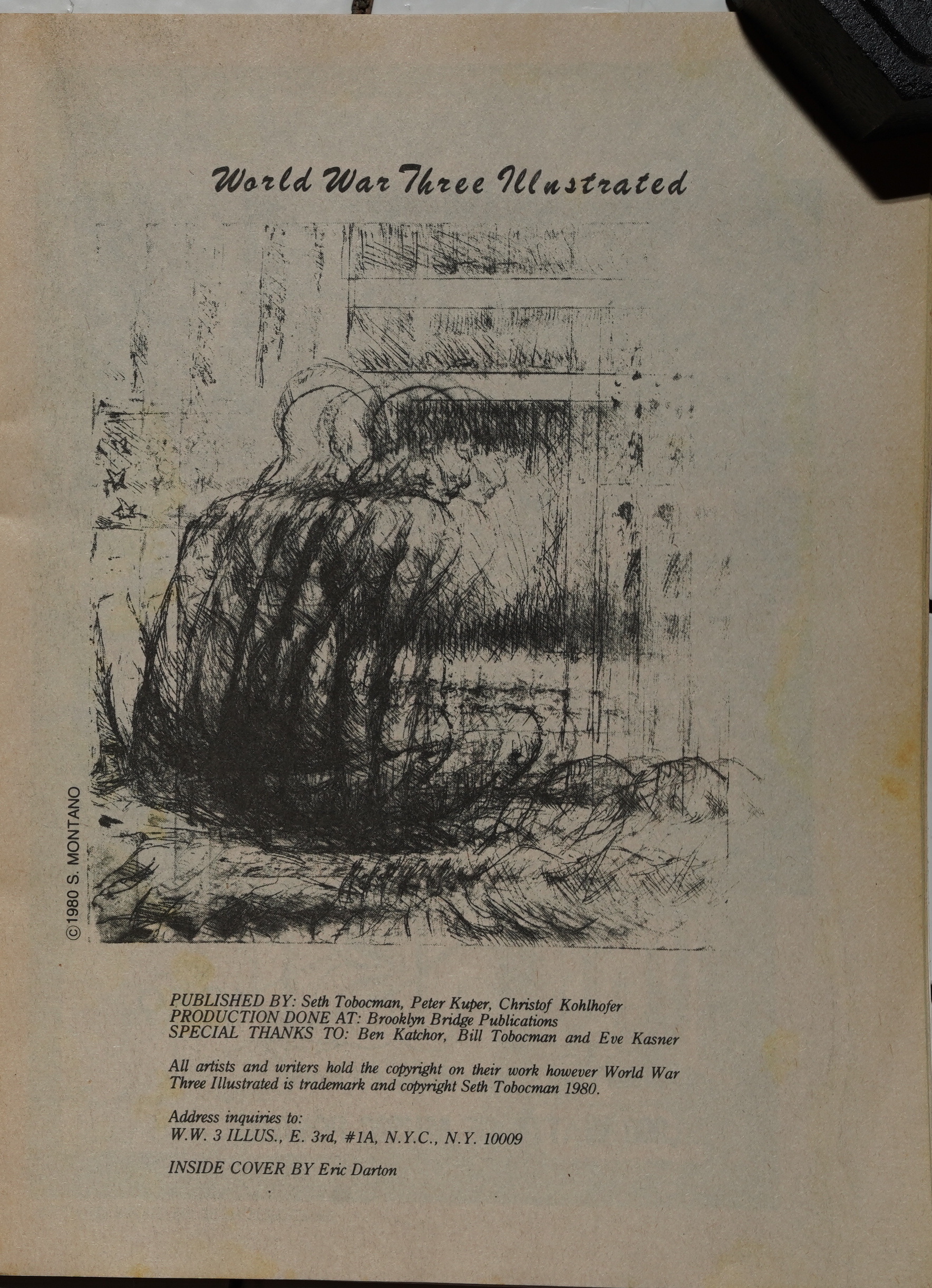 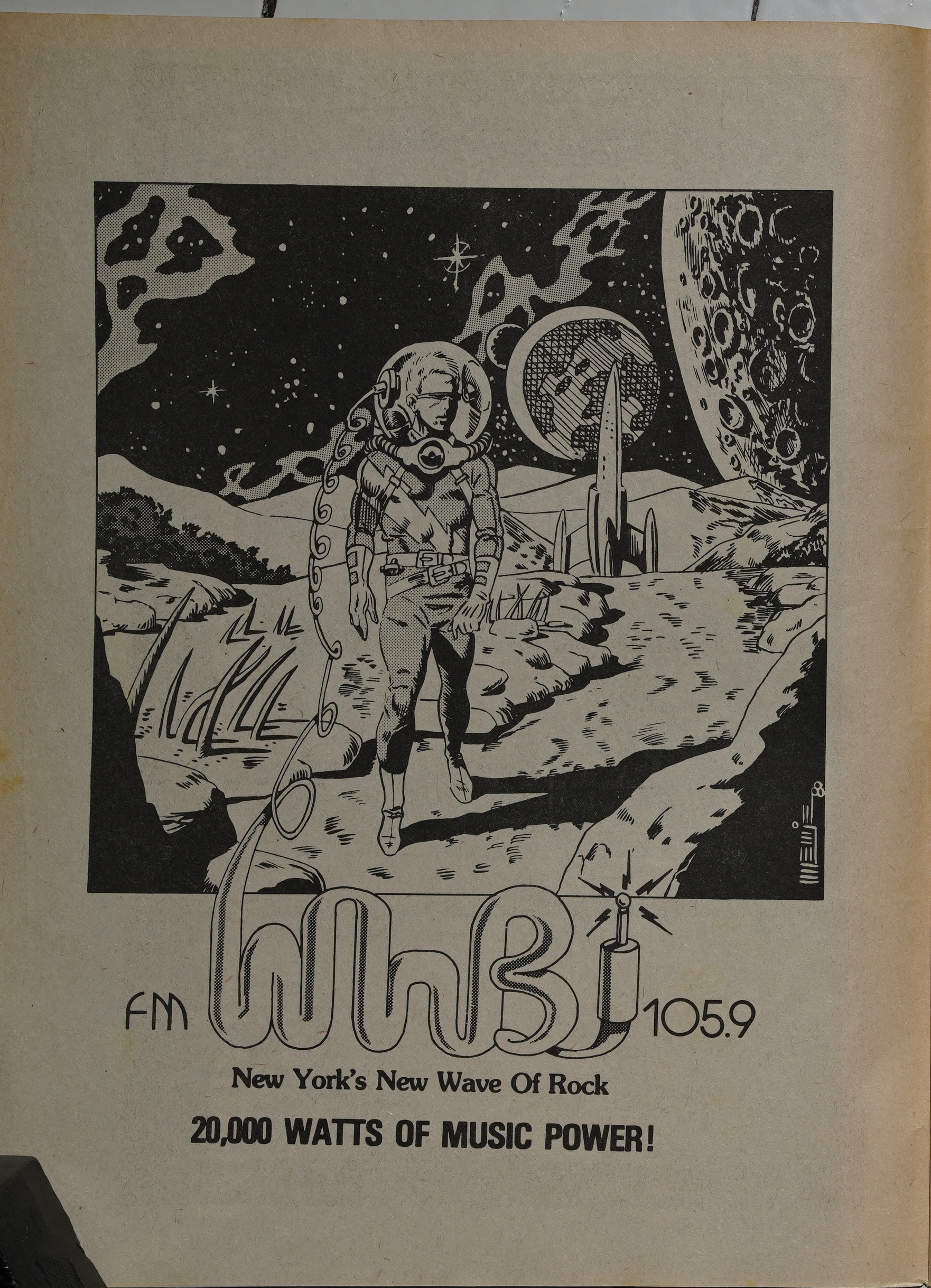 And an ad? For a radio station? With an EC-is sci-fi illustration? 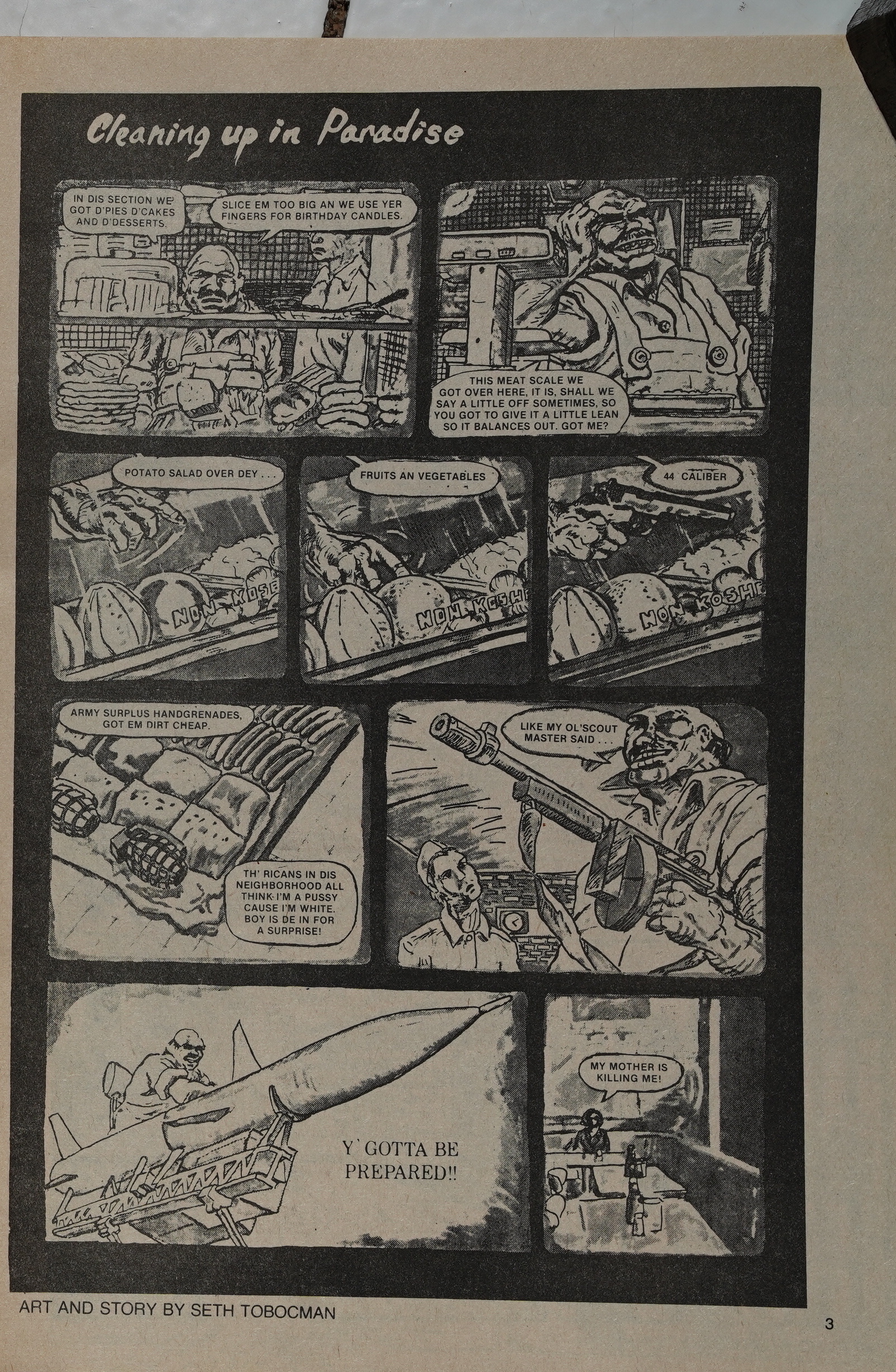 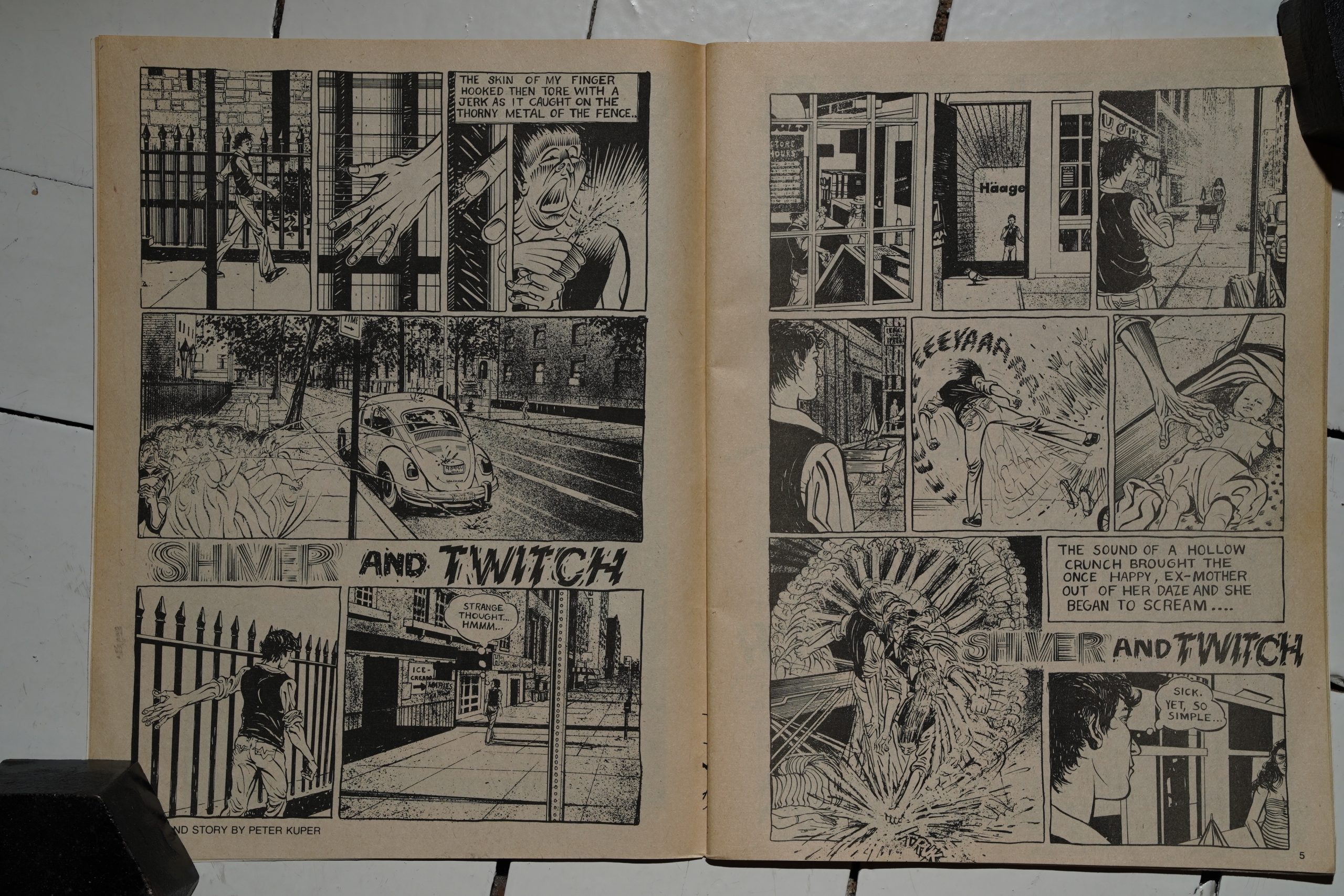 And I think I’ve read this story by Peter Kuper somewhere before? It’s a good little story about those weird thoughts we have, but it’s not what I’d expected to find here, really. 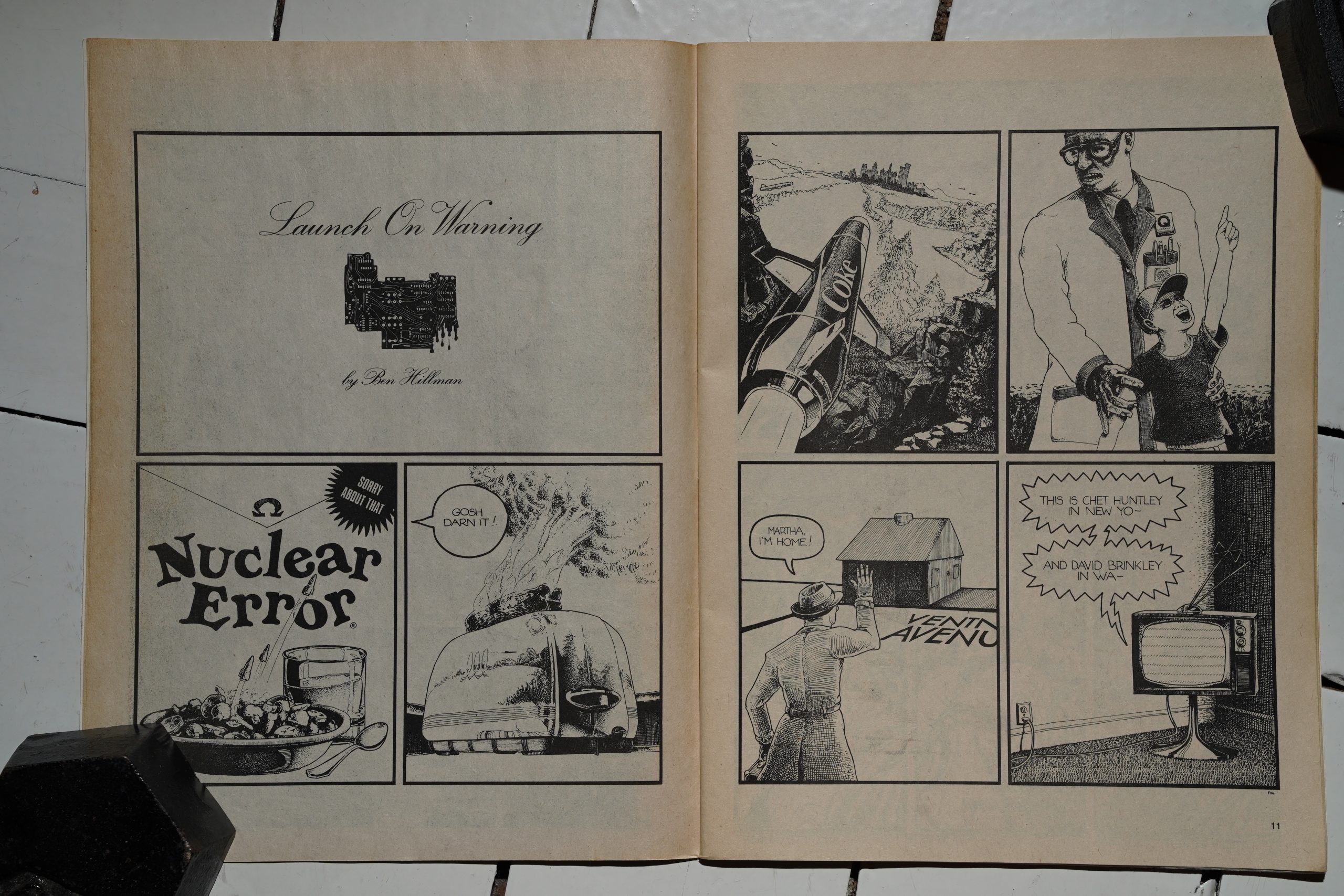 This Bill Hillman two-page is more like what I expected. 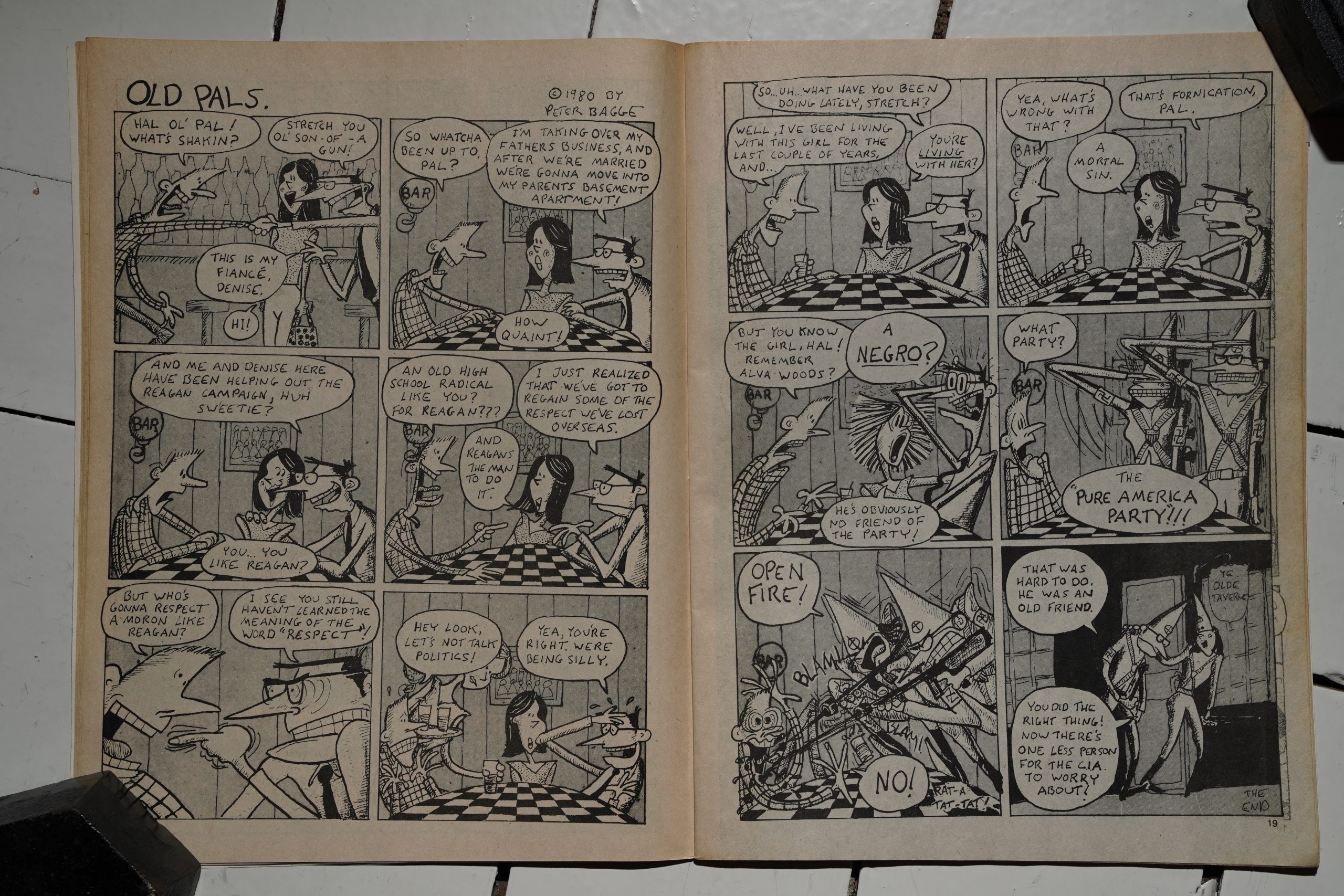 What the!? Peter Bagge!? Doing a “boy, conservatives are evil” thing that he probably regrets now? (He’s a “Libertarian” these days.) Hah hah! 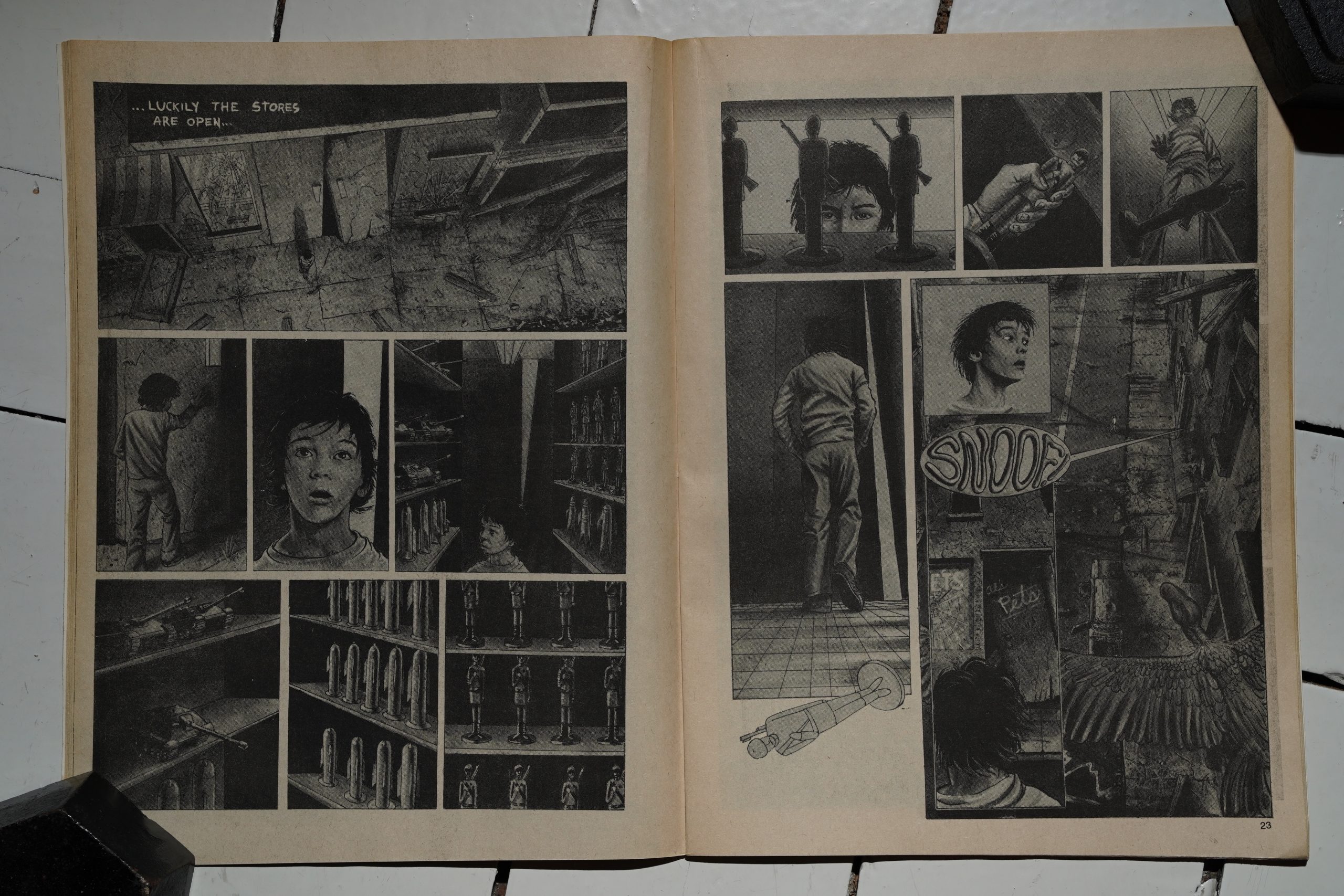 This is also Peter Kuper, and it’s a longish sci-fi story about a boy and his mutant dog. Rendered in a kinda… Corbenish way? I had no idea! 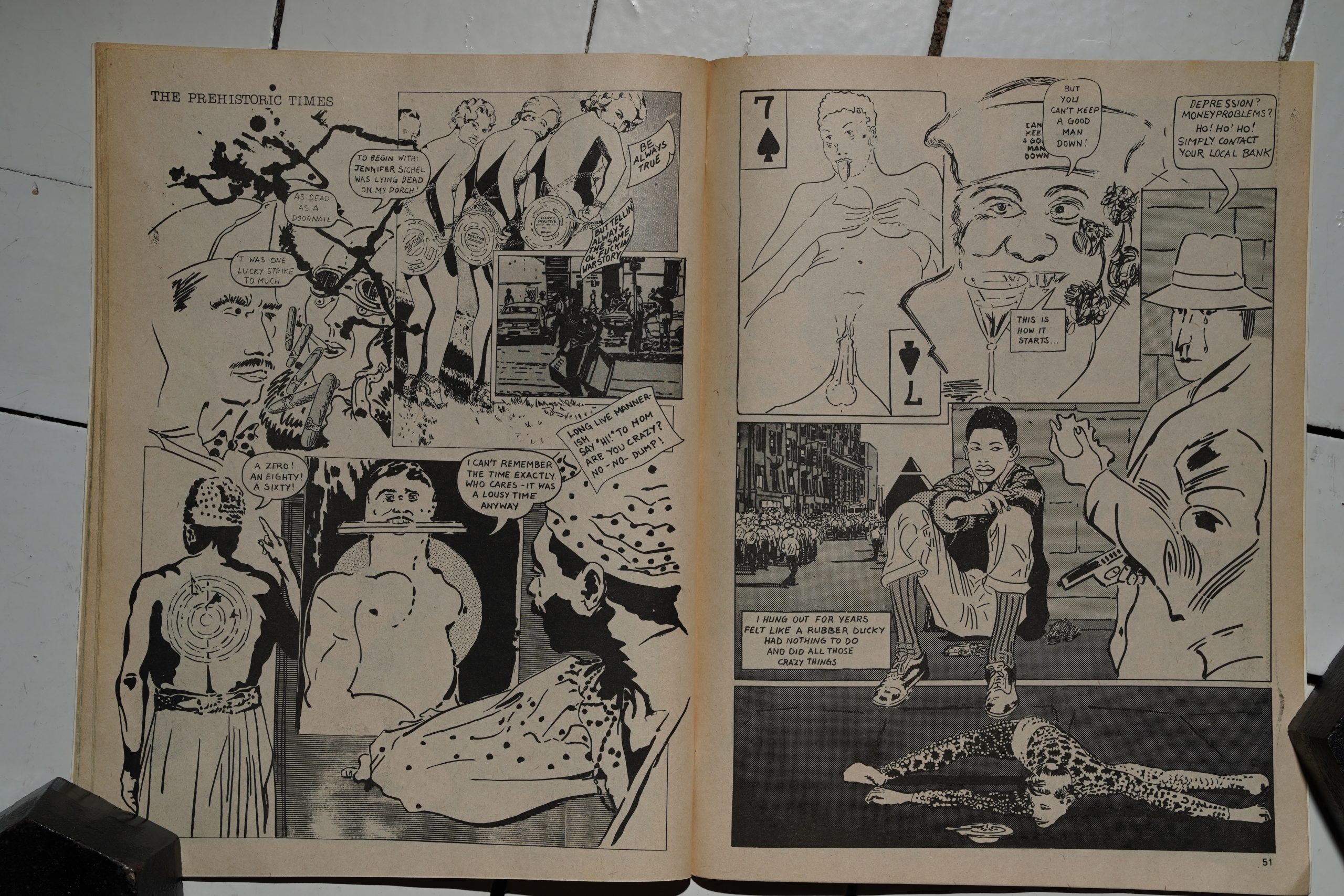 Finally, Kristof Kohlhofer pipes up with something that’s more like I expected to find here…

So… About two thirds of the pages in here were done by Kuper and Tobocman, and few of the pieces were directly political. Very different from later issues of the magazine, I must say. It’s… it’s pretty good? I’d say it shows “great promise”, but then I know that both Tobocman and Kuper had major, major careers ahead of them after this. But it’s less “Raw adjacent” than I had expected. I mean, it’s not even “Weirdo adjacent” — it’s more like a random Underground comix from ca. 1973.

So now I’m even more curious and want to read the subsequent issues, which is… difficult. But I guess I’ll just have to keep trolling ebay, because I imagine it became a lot more punk pretty fast? But I may be wrong again.

At virtually the opposite end of the spec-
trum lies World War 3 Illustrated, a $2.00
black-and-white magazine. WW3 is a real
curiosity: a throwback to the earliest days
Of the underground comics, obviously both
ambitious and amateur, an failure
but an interesting artistic failure.
The magazine is clearly published for
love rather than money, and has thus far
appeared only once a year, which may well
be all its publishers can afford. Both and
‘2 brim with a nearly incoherent and only
sometimes focused energy which draws in
part from punk nihilism and in part from
youthful idealism. There is a lot Of rage and
anger let loose in these pages, and some-
times it overwhelms the available talent of
the artists and writers. The best of these are
Peter Kuper, Seth Tobocman, and Milton
Knight, Jr., each of whom shows real abil-
ity, although none appears to have yet
gained suffcient discipline.
In terms of production WW3 is flawed.
Apparently some of the artists worked with
collages and mixed media, even charcoal,
and ,the printer didn’t have it fully under
control, shooting halftones that printed as
smudged grays and insufficiently masked
areas.
If World War 3 Illustrated falls short of
professional quality its ambitions soar far
higher than those Of any professional com-
ics, and that contrast may contribute to
the tensions that energize it.