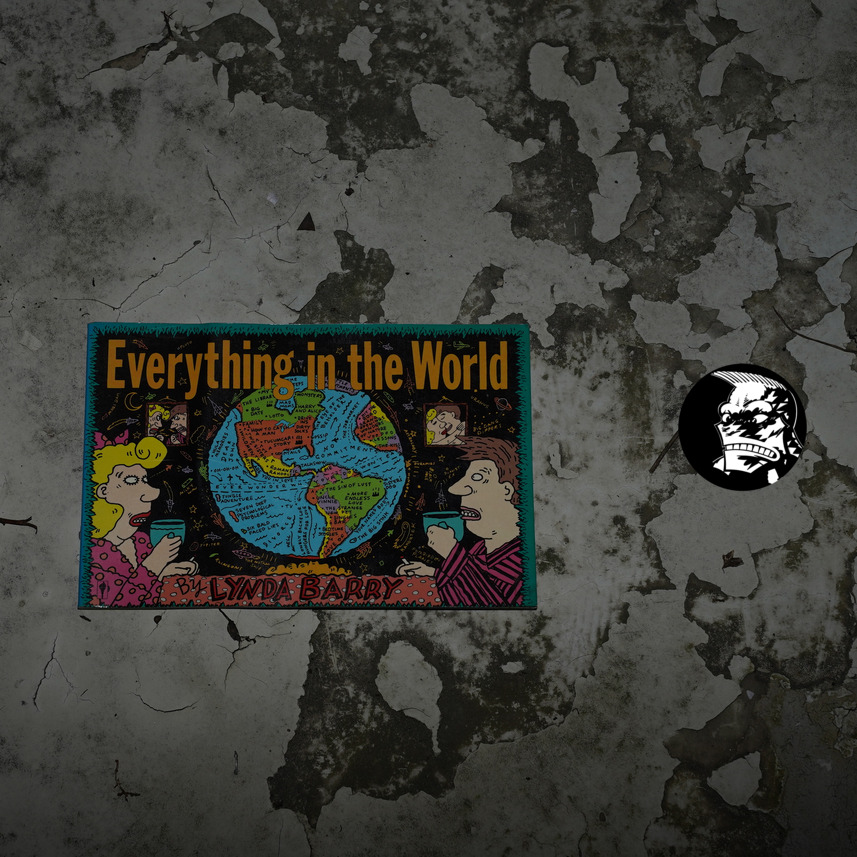 Everything in the World by Lynda Barry (230x149mm) 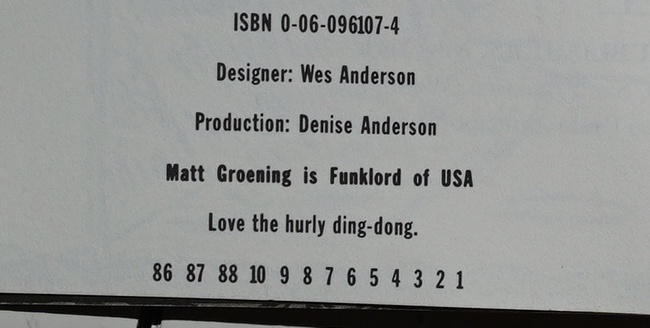 Anyway, it’s been fun reading these early Lynda Barry books chronologically — I sorta knew that her style had changed a lot during her first (say) five years… but now we’re kinda getting near to the style she was going to use when her strip had the major mainstream breakthrough (which happened a couple years later). Gone are most of the angular, aggressive lines, and everything’s kinda rounded and busy…

In some of these strips, she does seem to be casting about for something new to write about — sometimes more successfully than others…

This book is divided into themed chapters and I think it’s pretty obvious what her prime subject matter was going to be: 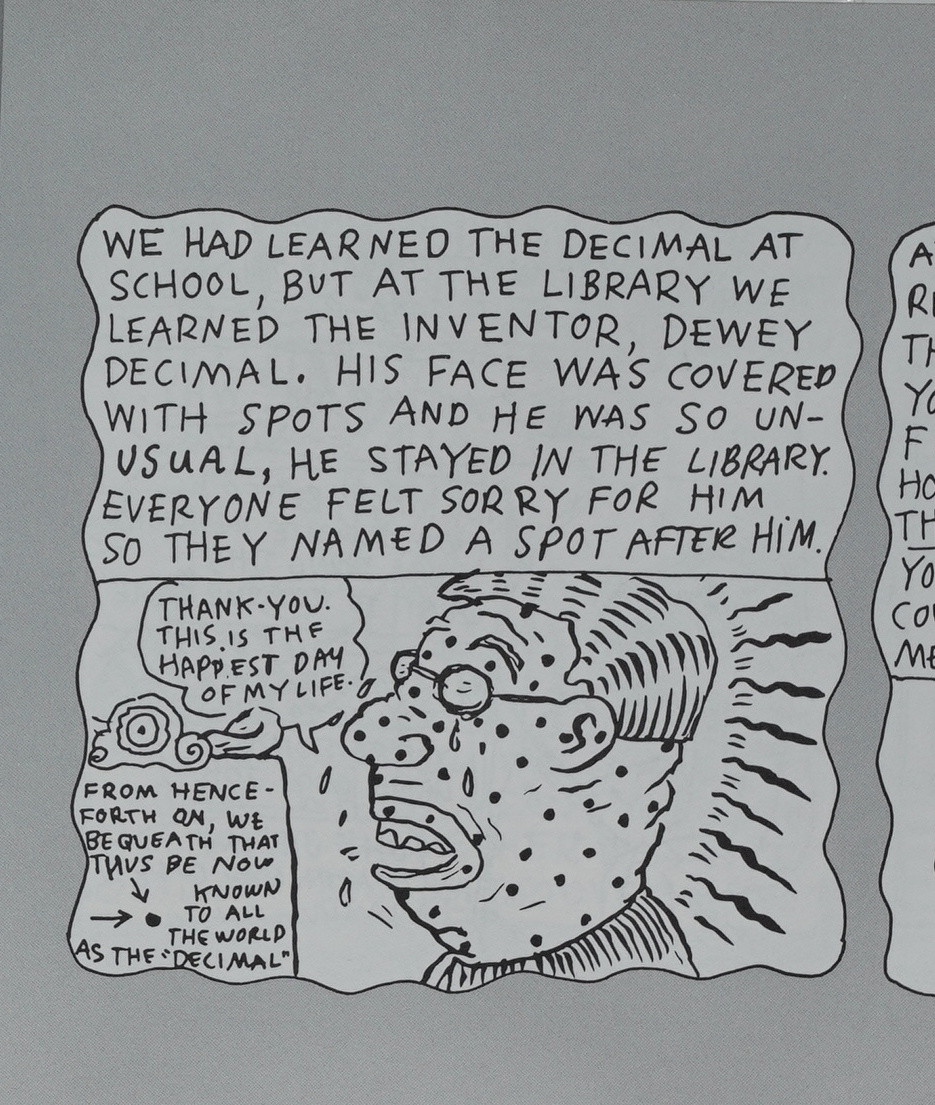 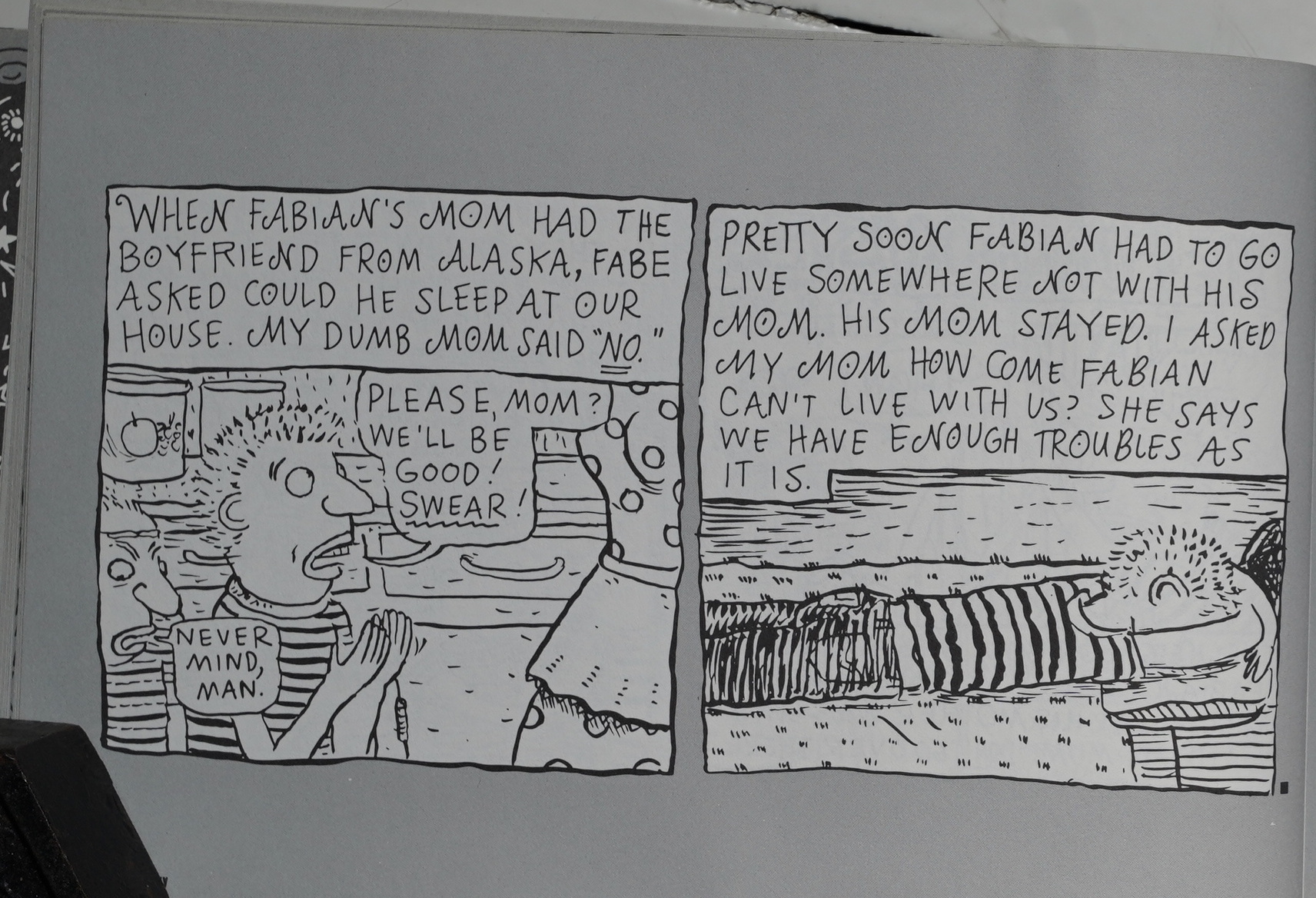 I don’t think anybody else does this thing with their linework — you have the figures and faces outlined in a pretty solid, thick line, but then there’s a plethora of thinner, more tentative lines inked on either side of the more solid line.

Barry wouldn’t really become a megastar until she hit upon writing about the Maybonne/Marlys/Freddie family (i.e., using continuing characters), but in this book we see some tentative steps taken towards slightly longer continuities… and she uses herself (as a teenager) as the focal character. It’s kinda thrilling to read these, because you can just tell that she knows that she’s uncovering a seam of material here that she’ll be mining for years to come…

Anyway, it’s another fabulous collection. I don’t plan on covering her entire career in this blog series: She’s moving away from the “punk comix” thing I’m vaguely nattering on about here, so I think I’ll just be doing a couple more and that’s it.

As with Groening, two trade-paperback
collections of these early strips are available
at bookstores. But her newest collection,
Everything in the World, also incorporates
some Of her strips on a new theme: the
tribulations of growing up. Like Groening,
Barry has moved on (or moved back) from
the sexual frontline to the realm of
childhood, (That Groening and Barry are
friends and occasional collaborators may ex-
plain this simultaneous shift in focus.)
She •seems to have little to say about
romance any more, and looking over her
phenomenal coverage Of that sphere you
don’t wonder—there may be in fict, nothing
left to say. Ever. But she has plenty to say
akX)ut her juvenile days, and the remarkable
thing about that is how her style mellowed
so abruptly; astonishingly, she writes about
the terrors and humiliations of childhood
without bitterness, without rancor, almost
without judgment. Despite the unpleasant-
ness of some of her memories, despite the
fact that again, there is pain here, and she
must feel it, she’s utterly honest about grow-
ing up. She seems to want to record exactly
what happened, exactly what she felt, ex-
actly what shaped her. This isn’t situation
comedy, as is the case with John Stanley,
or even at times with Groening; the humor
in her reminiscences is never that forced.
Everything has a natural ambience; it’s her
juxtapostion of events and feelings, her time
ing, and above all her uncanny gift for the
vernacular that make them funny. “Bit-
tersweet” is a debased word, having been
lent too Often to phony romance movies,
but it applies, in its original sense, to Barry”s
current work.
Her art style, too, has softened, has
become distinctive. It’s rounder and more
careful, still earmarked by the appealing
crudity, but with a real cartoonist’s eye for
faces and body language. When she relates
how the boys in her neighborhood fell in-
to an obsession with “pimp walking” (“Boy’s
Life”), the slack jive of their bodies is
hilariously realized; despite the crudity of
the rendering, you can, after you’ve read it,
get up and do the “pimp walk” yourself; it’s
that complete a picture. •And when Barry
gets down to faces, her prejudices can’t be
hidden. If there is a villain in this series of
strips, it’s her cousin, Marlys, who figures’
as a spoiler in just about every scheme
Barry’s gang devises; Marlys’ face iS like a
mass of boils with pigtails. Ugly is as ugly
does—as just about any kid knows
instinctively.
The strips themselves run the gamut of
childhood experiences, to a much greater
extent than Groening’s; Barry relates her
adventures from her earliest childhood
through her teen years, and occasionally
does a strip with a child protagonist Other
than herself (including boys.) As such, she
has a much broader scope than does
Groening, whose Bongo is more-or-less fixed
in the fifth grade.
And whereas Groening is interested in
youthful alienation, Barry is much more in-
terested in the entire social Structure that
surrounded her. She was part of her world
in a way that Groening perhaps was not.
One Of her most telling strips in this respect
is “How Things Turn Out,” where she deals
with social class. “In school,” she tells us,
“there were the queen girls and then there
were the rest and at the bottom of the rest
were the ones, whatever you want to call
them, the ones you Would be ashamed to
have to touch.” Okay, nothing we all didn’t
know already; we’ve live it. But she goes on
to examine this particulai-ly hierarchical
phenomenon inadetail, discussing the fixi-
ty of social position (“Occasionally someone
could get lowered for, say, wetting their
pants on a field trip, but it was almost im-
possible to move up”) and concluding with
an analysis of the origins of class assignment
that is nothing short of brilliant, and which
would have shaken Karl Marx to his very
bootstraps: It had nothing to do with how
smart you were. And even if you weren’t that
cute’, if you were a queen, people would copy
you. It was just something decided between us,
even though it wasn’t us who decided it. It was
something we all knew about. It was Our main
rule of life.

One thought on “PX86: Everything in the World”