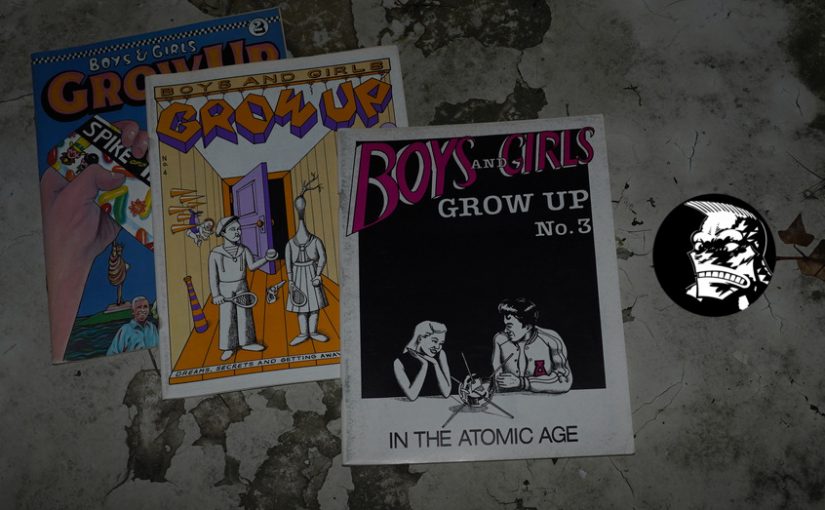 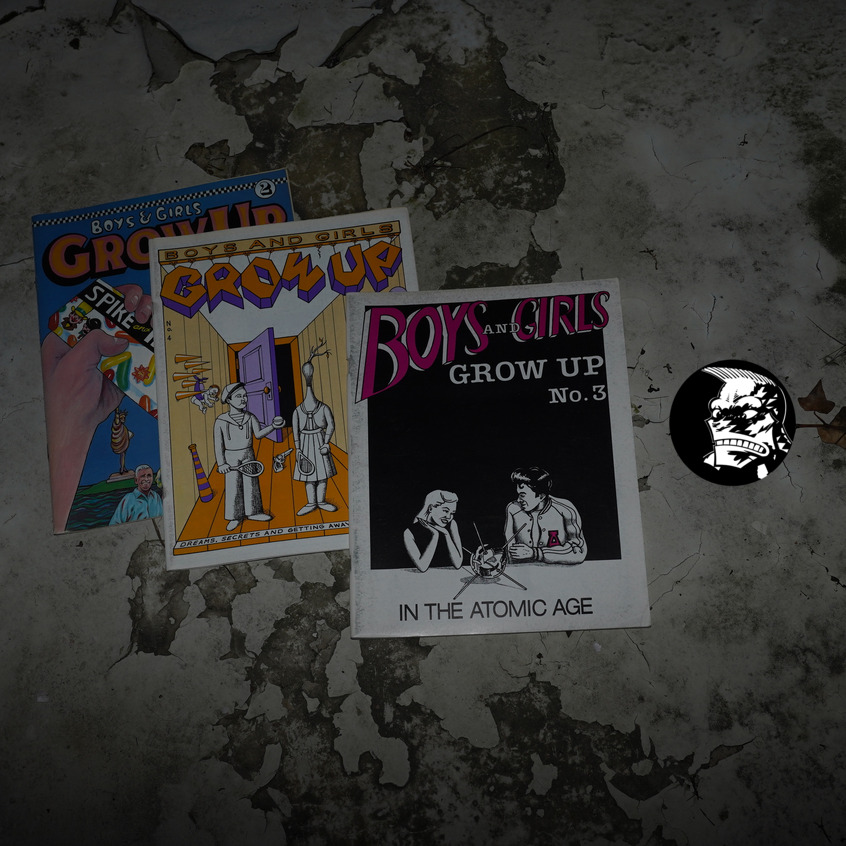 I’m not quite sure where I happened onto these comics… I feel… I found them in a TAKE THEM AWAY WE HAVE TO GET RID OF THEM box at a comic book store. But those may be false memories.

So I thought it might be interesting to natter on about them a bit here, anyway. 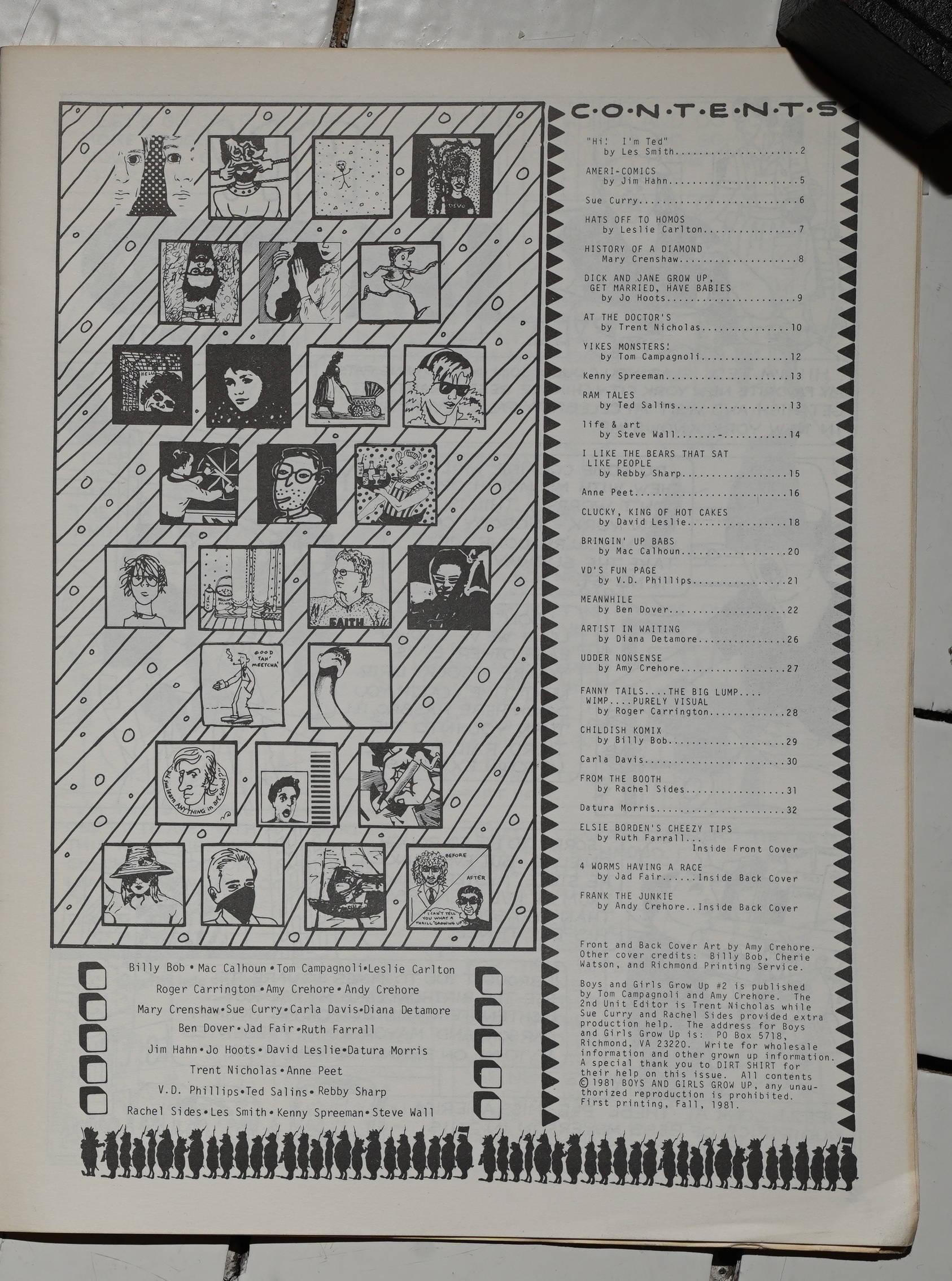 The first issue I have here (i.e., #2) is chock full of shorter pieces… and somewhat uniquely, I’ve never heard of any of these people. I guess what happened in Richmond mostly stayed in Richmond? 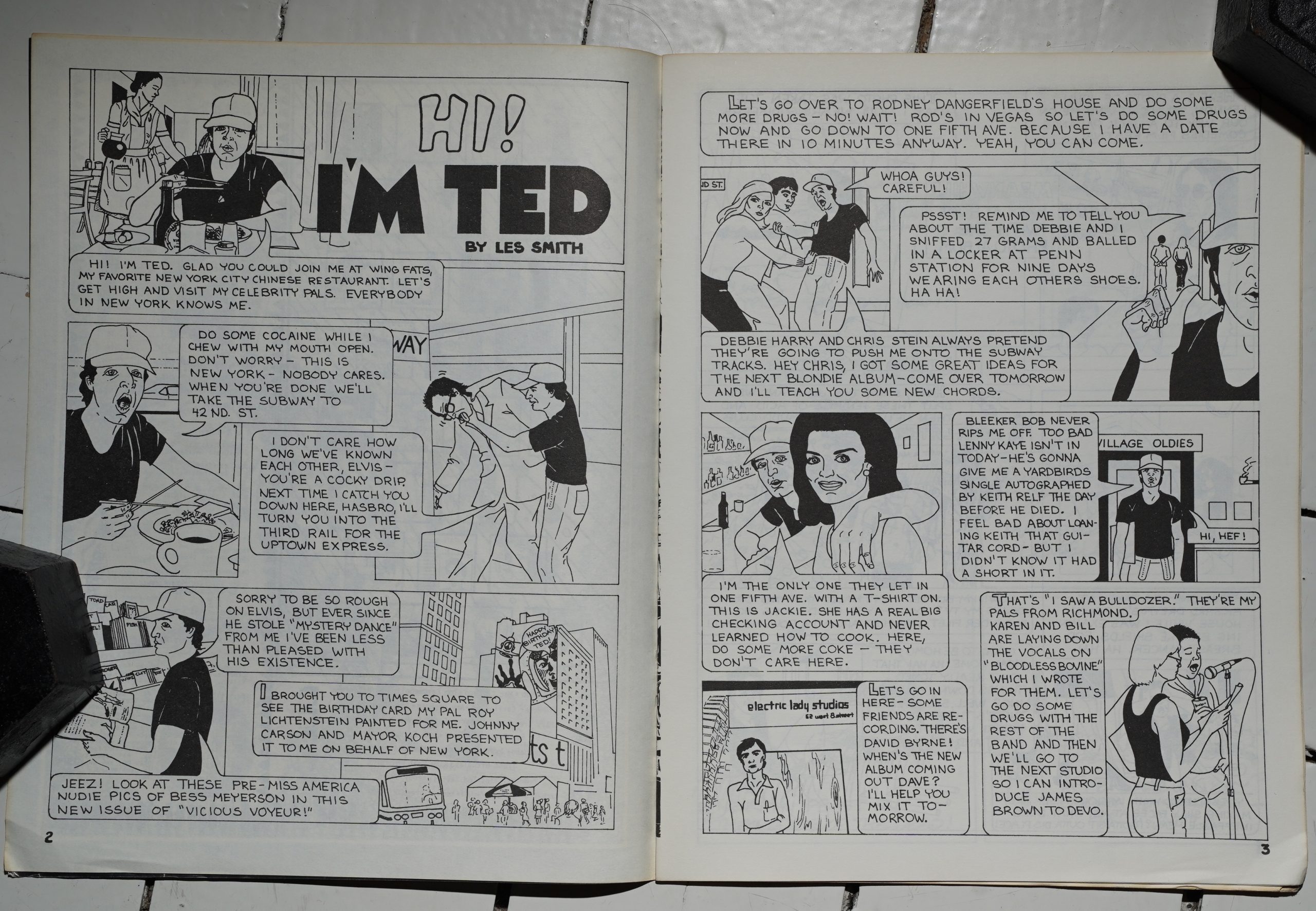 We start off with a snide thing about New York, and namecheck all the hipsters (Debbie Harry, David Byrne, etc). City rivalry? (Les Smith.) 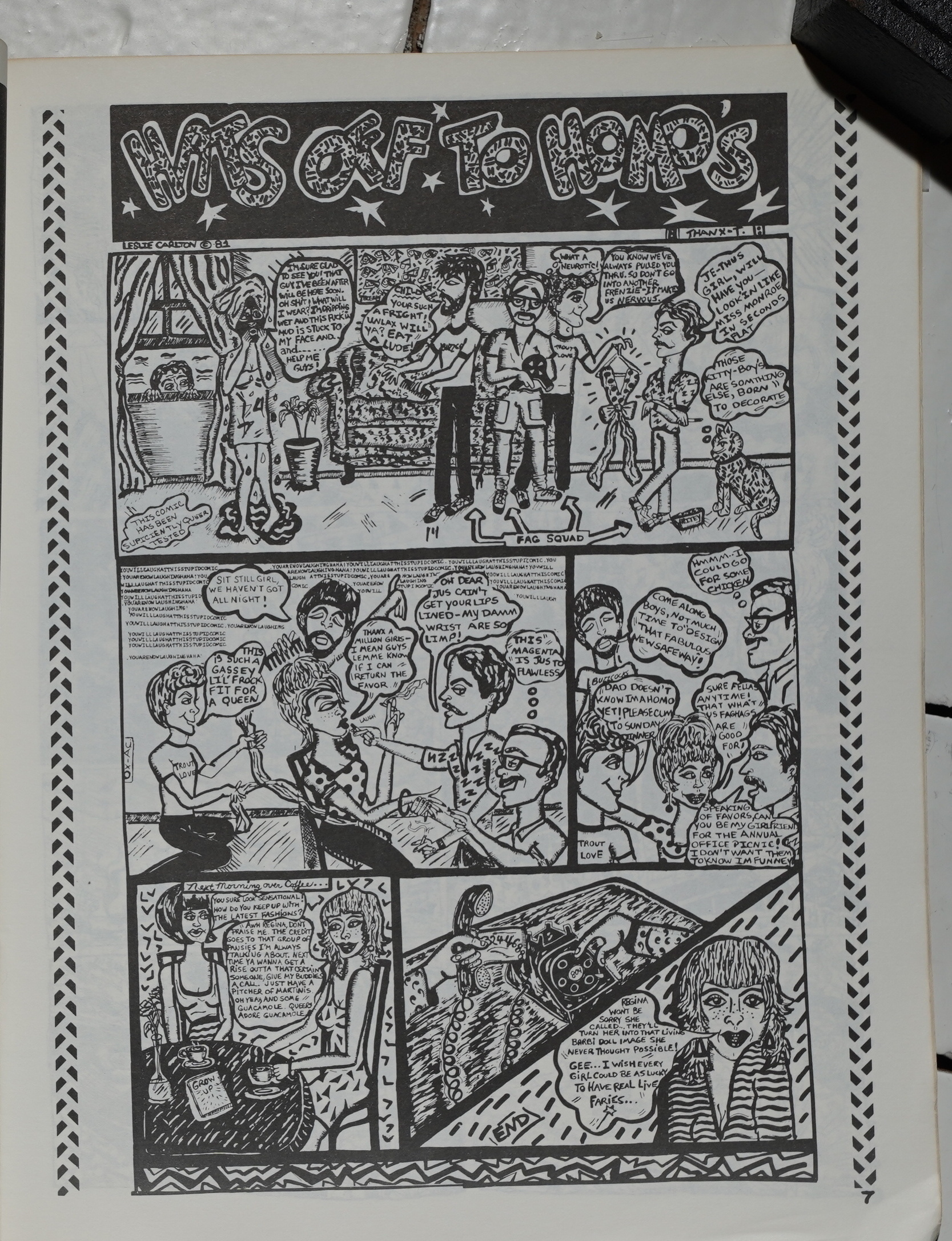 I guess I can see some influence from undergrounds, but this could basically also have been a thing from Drawn & Quarterly in the 90s. I mean, the artwork, not the writing. (Leslie Carlton.) 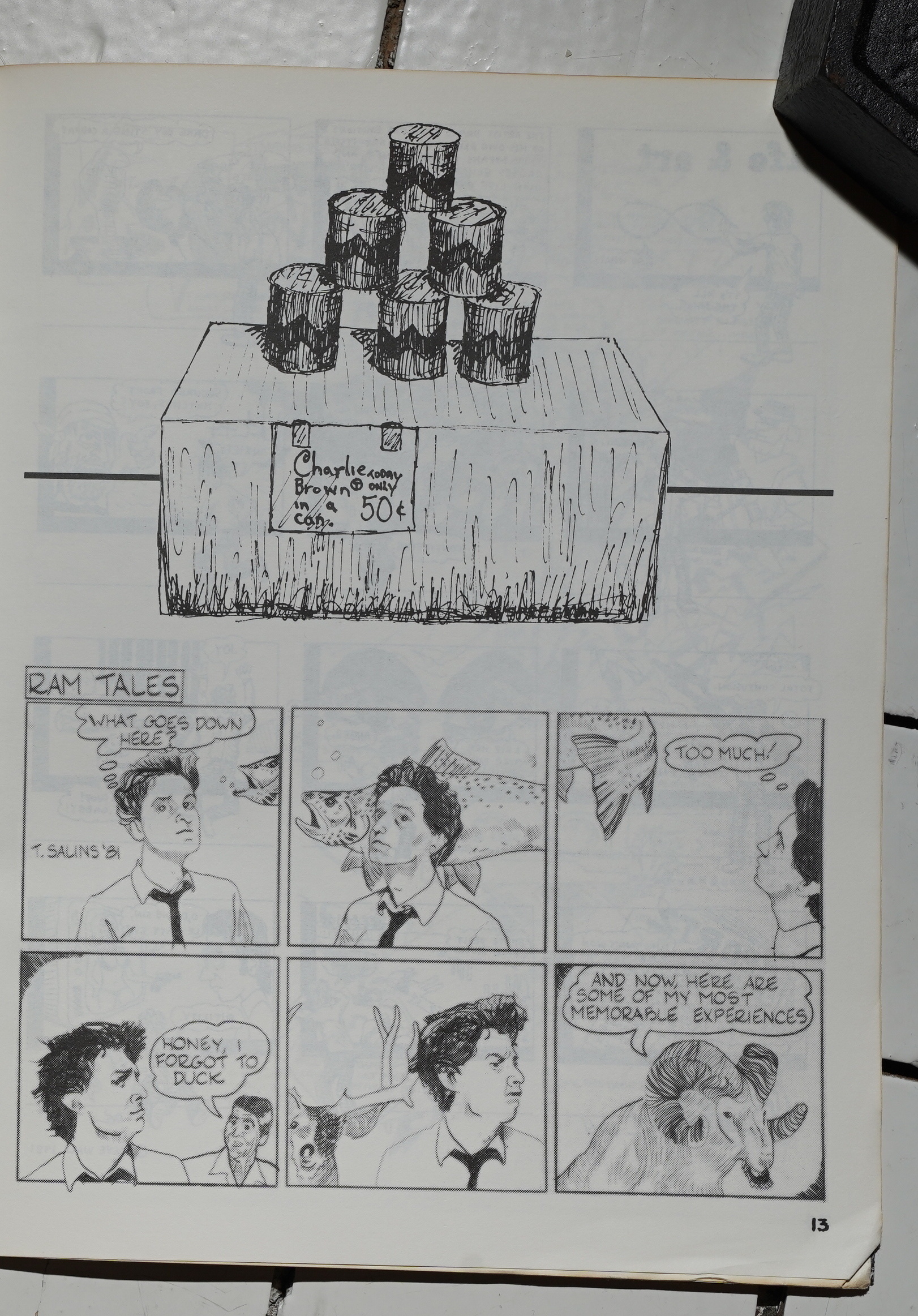 But it’s things like this that makes me guess that there’s an art school in Richmond and that most of the people here attend that school. I mean… Charlie Brown in a Can? That’s fun. (Kenny Spreeman and Ted Salins.) 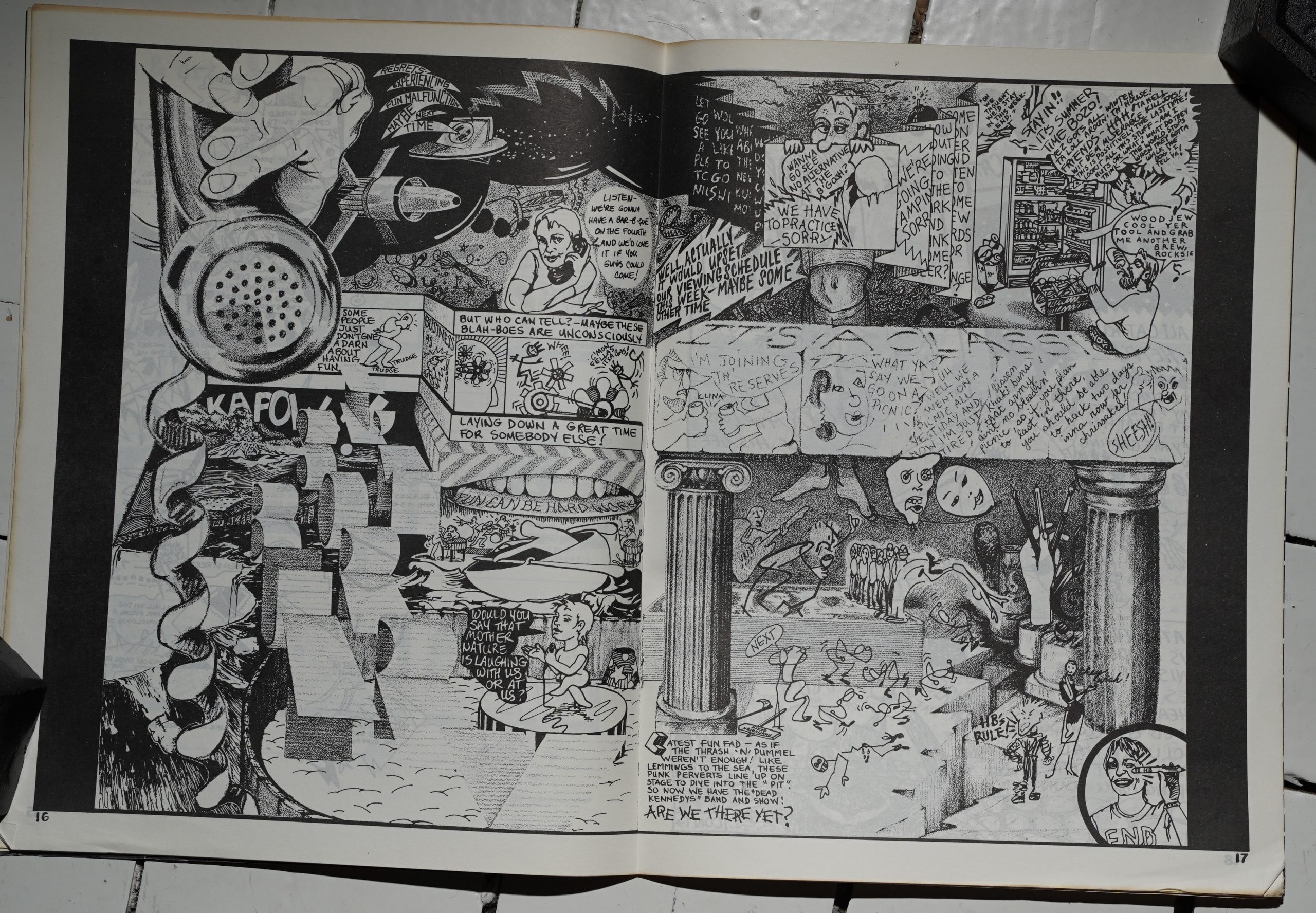 And… I kinda like this spread. It’s so out there. (Anne Peet.) 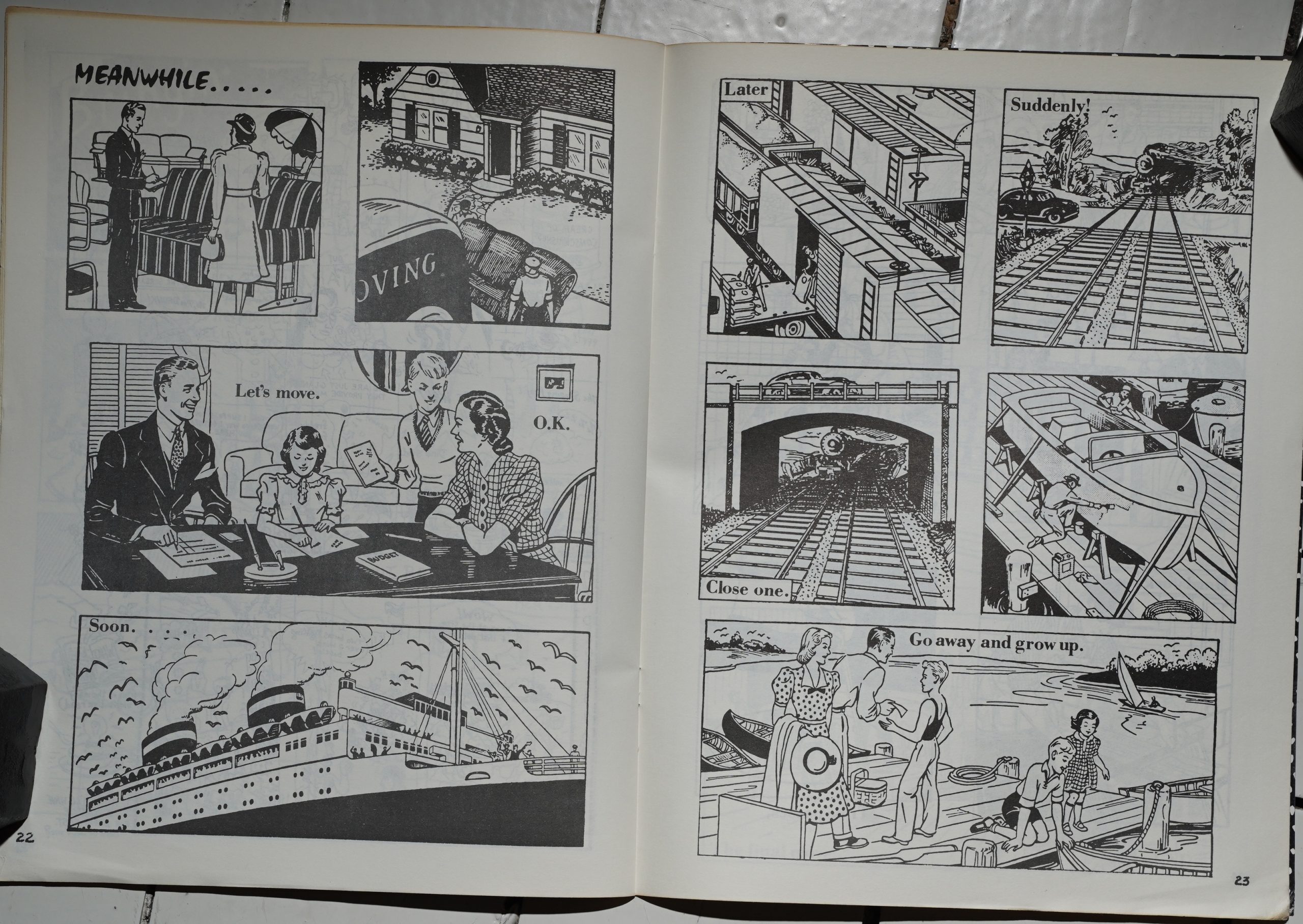 And, of course, you have the more conceptual stuff. (“Ben Dover”. That’s mature.)

So… it’s a pretty enjoyable issue? It’s got all these things by people who seem very young, but possibly talented? 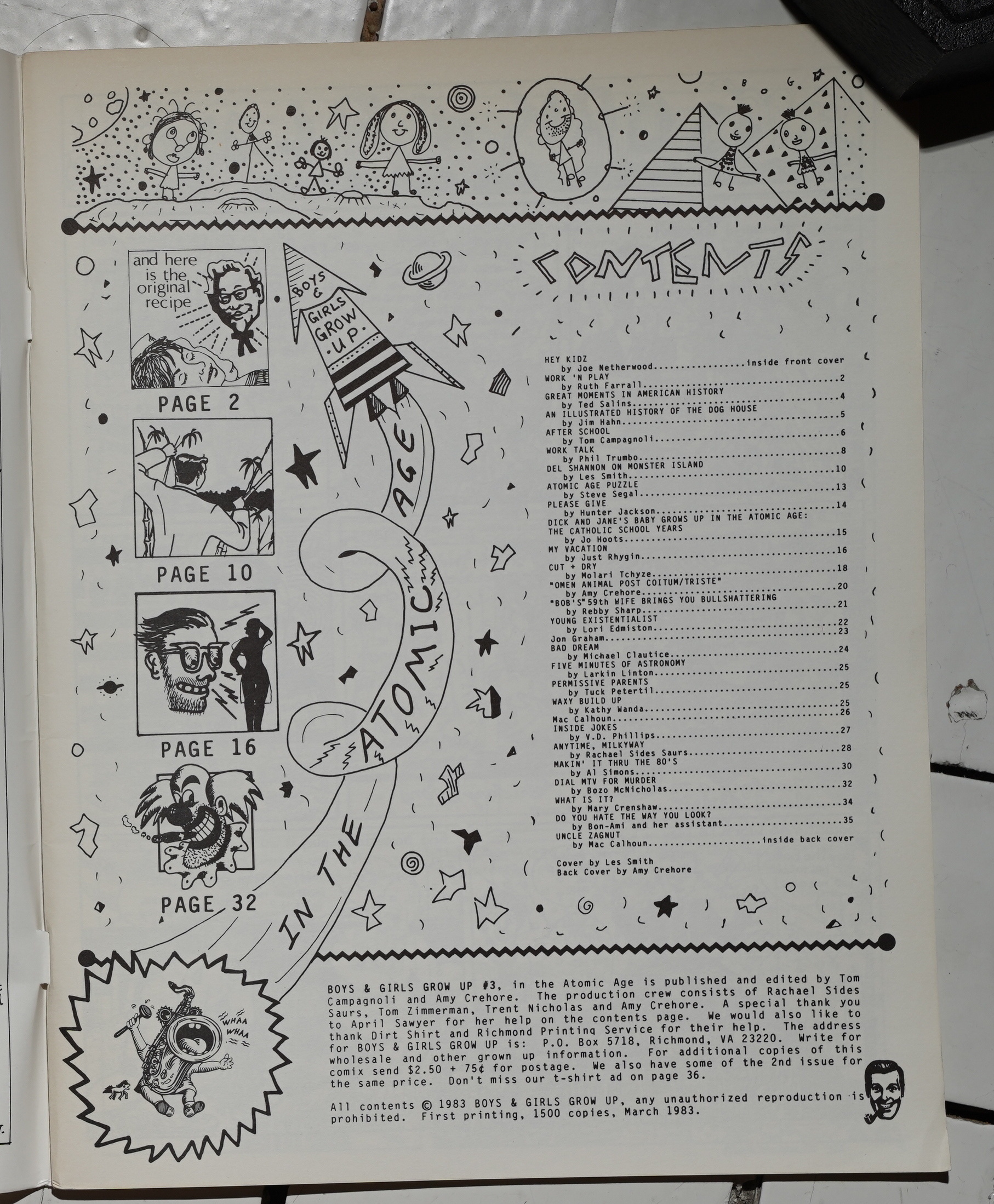 The second issue (i.e., #3) is equally full of short stuff, and this issue has a theme: “In the Atomic Age”. 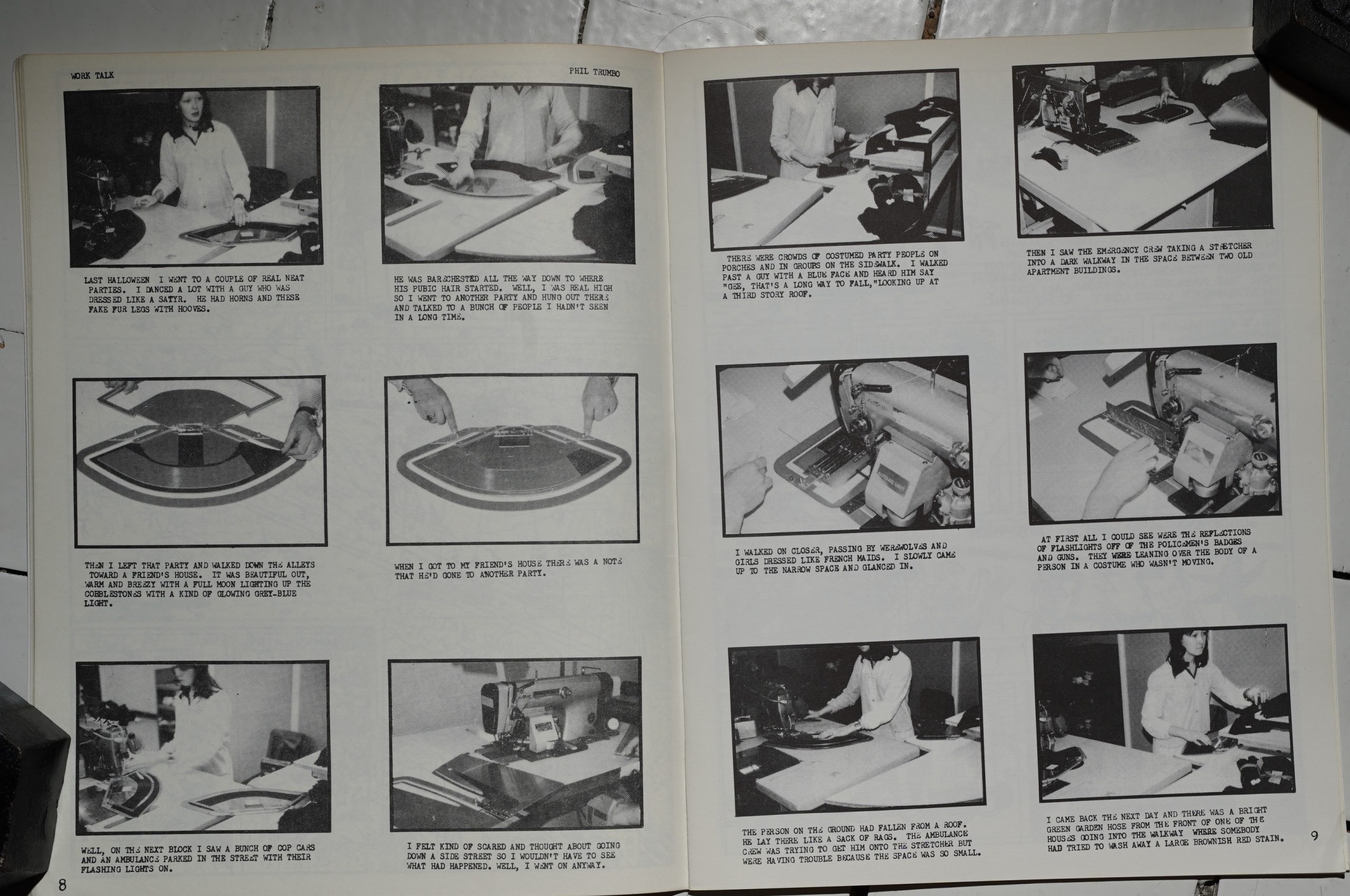 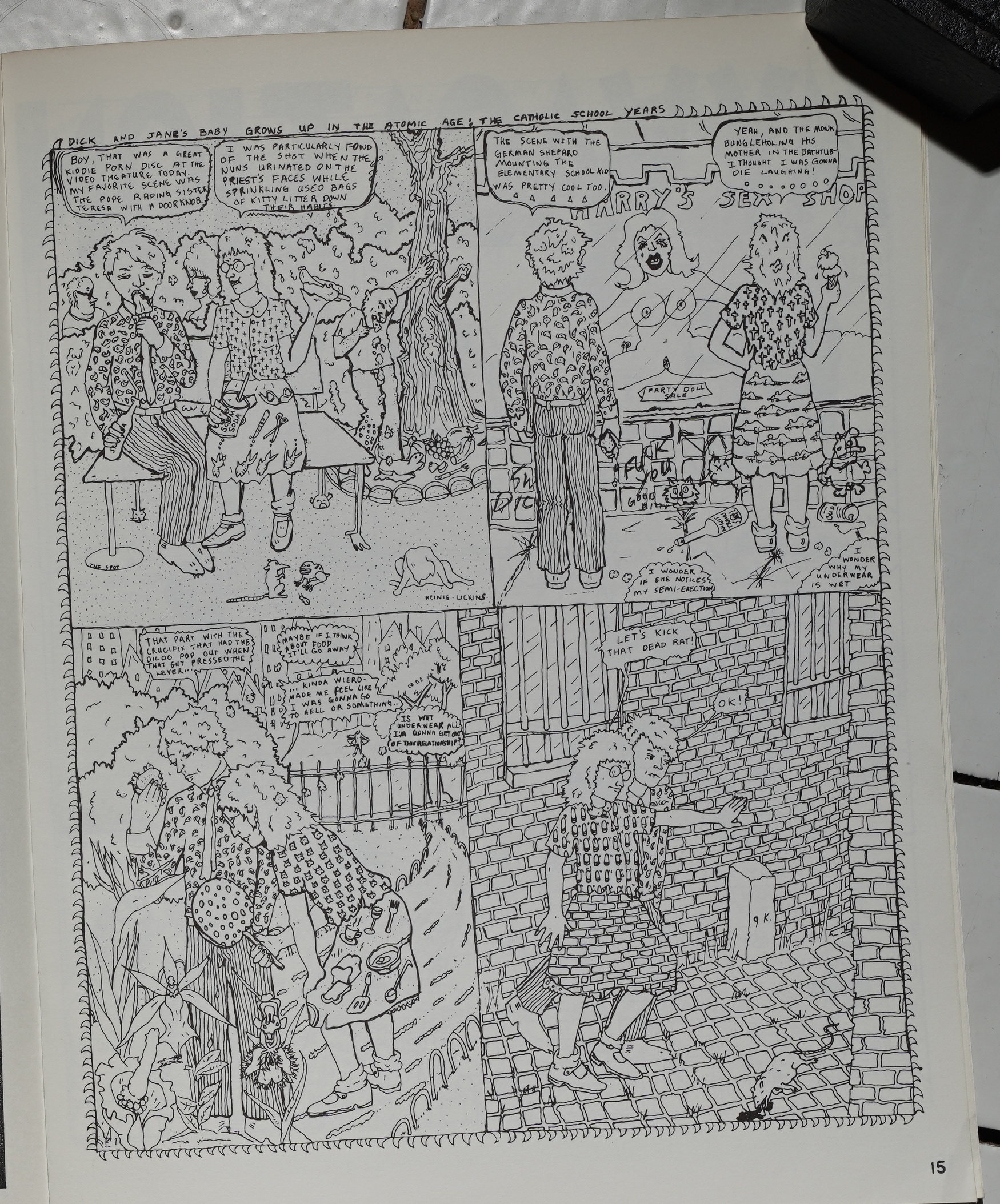 This rendering style, for instance, is oddly appealing. It’s impossible to know where to look because everything has the same weight, but for once, that makes it mysterious and inviting instead of off-putting. (The dialogue seems to go for being all transgressive and stuff. Kids these days! I mean those days! In the retro-future!) (Jo Hoots.) 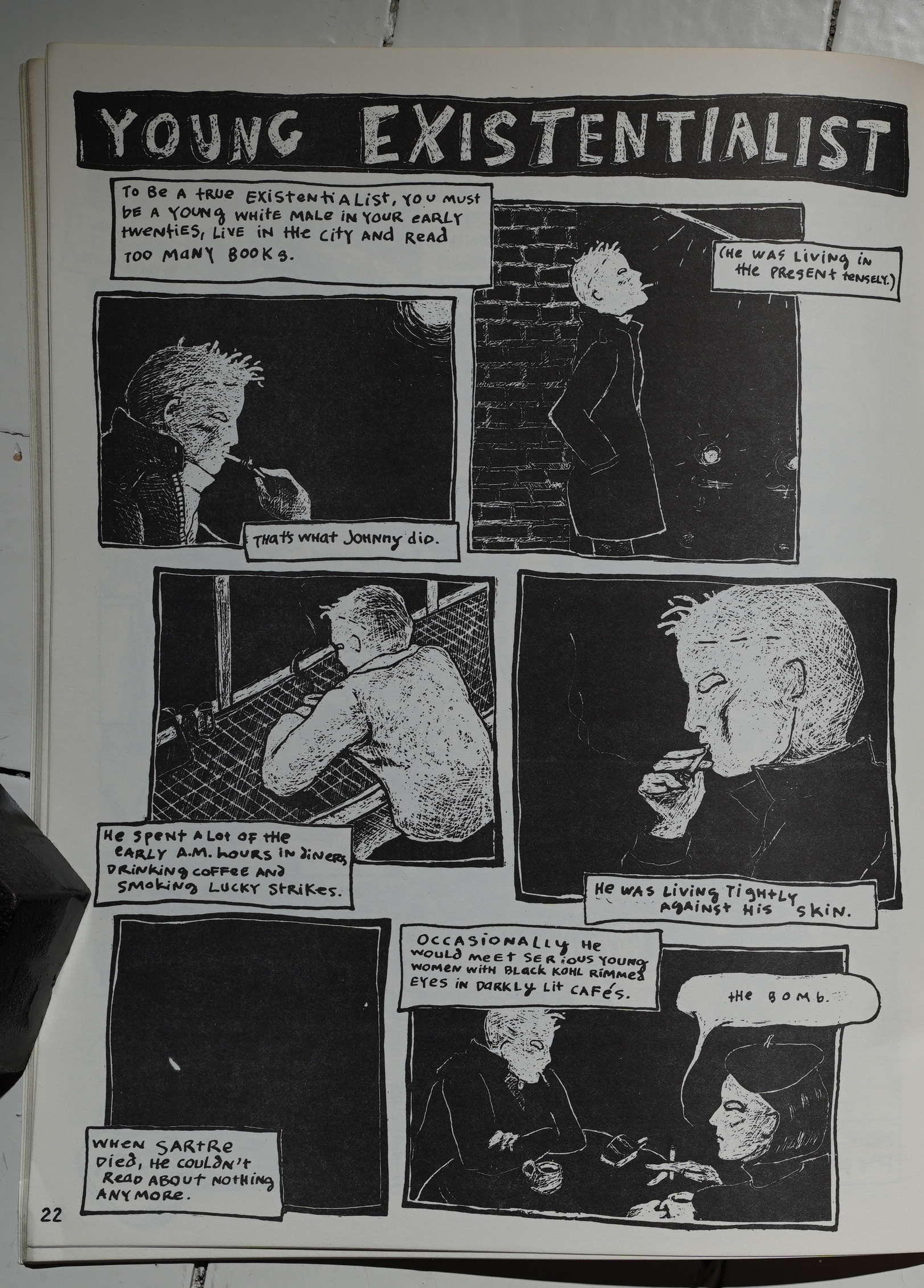 And this has to be scratchboard, I guess? Very nice indeed. (Lori Edmiston.) 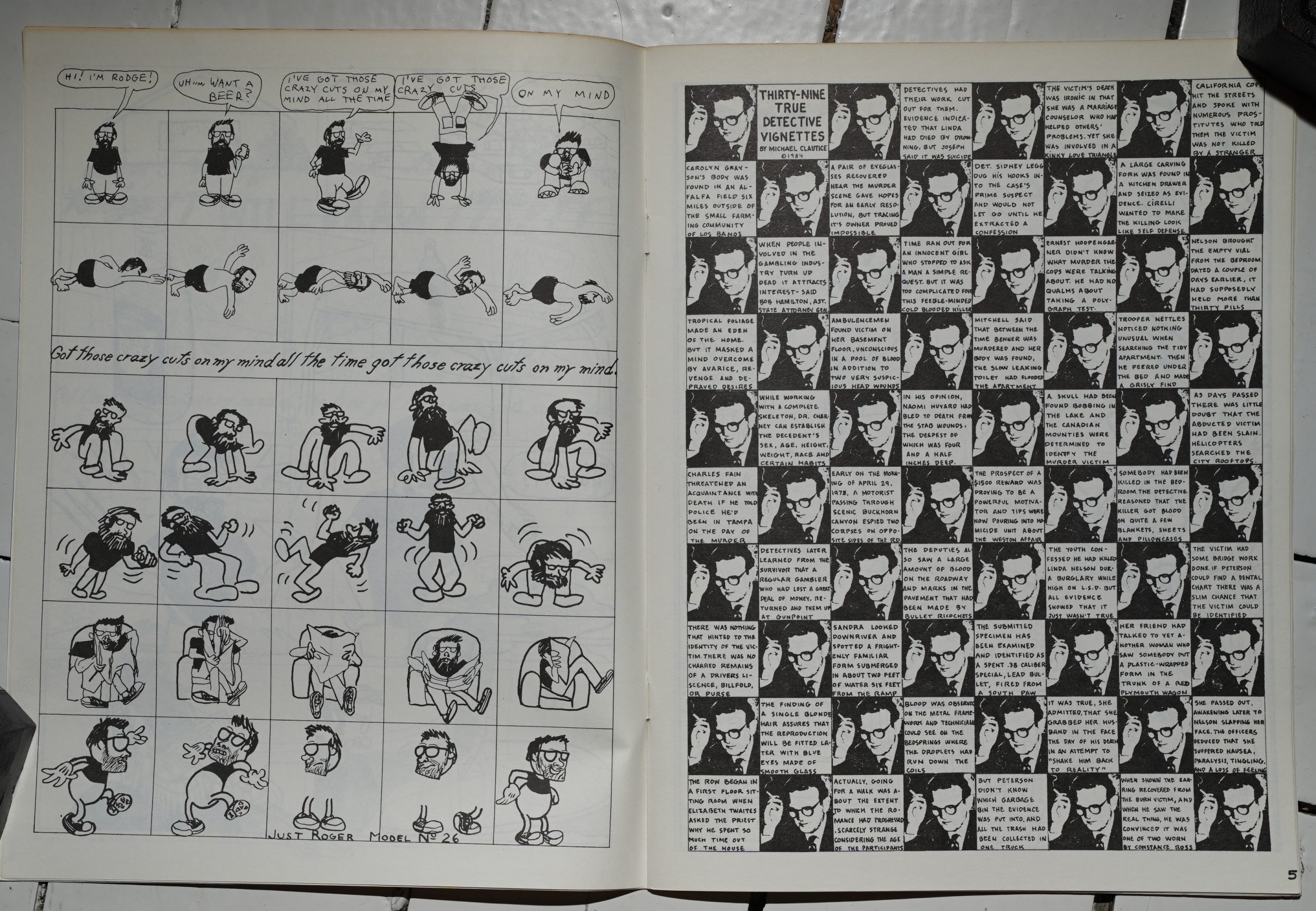 The third issue (i.e., #4) is slightly shorter (28 pages; the other two were 32 pages), and seems to veer off into two different directions. One half leans more into comics formalism… (Roger Carrington and Michael Clautice.)

… and the other is almost normal alt-comics. (Hunter Jackson.)

BOYS AND GIRLS GROW UP #5 by various.

Boys and Girls Grow’ Up is an anthol-
ogy comic featuring stories by about
a dozen artists. The strips are drawn
in a bewildering variety of styles and
don’t have much in common, but the
artists themselves do. All of them
either live or have liwd in Rich-
mond, Virginia. This “regional”
theme isn’t in Boys and
Girls, but it does signal an increas-
ing trend, especially for small press
where there are no national centers
of production, just several hundred
individual artists scattered across the
country. By making this aspect of
their contributors’ backgrounds a
relevant issue, editors Crehore and
Campagnoli are helping to re-estab-
1ish the seldom-discussed link be-
tween Wihat an artist draws and what
the artist is in “real life,” As for the
stories themselves, most fall some-
where between folk-art and New
Wave styles. A few are incredibly
messy and hard to read, but at least •
worth trying, especially Roger Car-
rington’s wildly demented “Slow-
junior’. ‘ Boys and Girls isn’t a great
technical achievement, but there’s
plenty of honest and thoughtful work
in it. 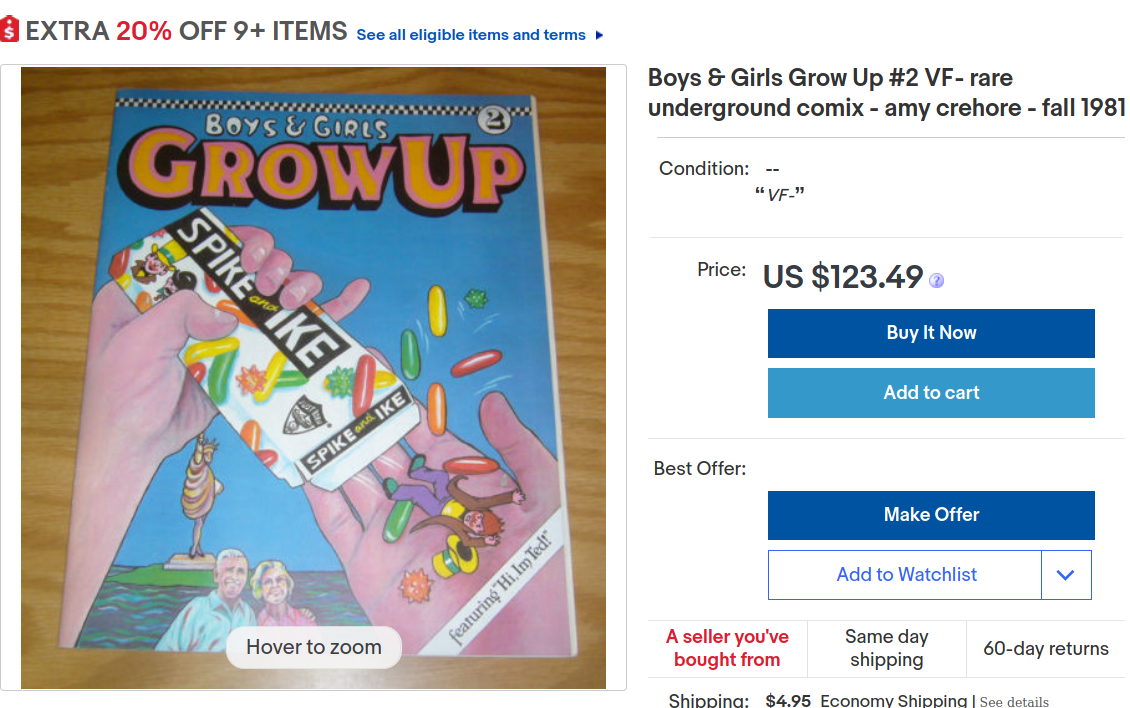 Apparently I made a good deal when I picked these up for almost no money? I’m such a canny investor. 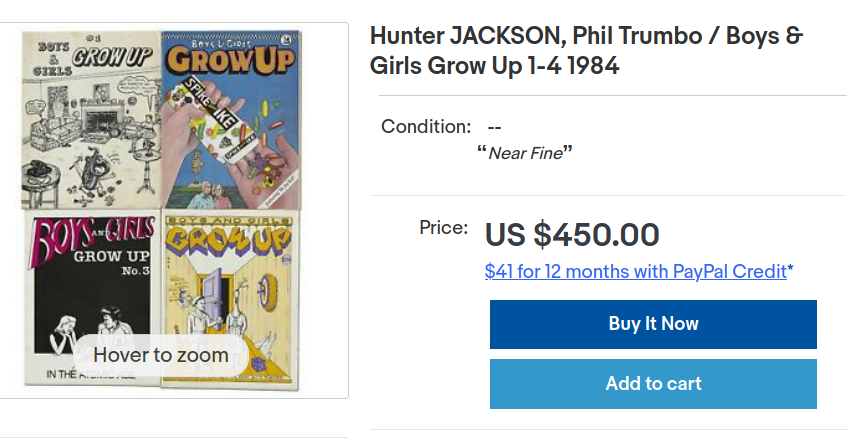 The first four issues of this underground comic created and edited by Amy Crehore and Tom Campagnoli. Inspired by Art Spiegelman’s *RAW* and *Arcade*, the pair set about recruiting fellow artist from the local Richmond, Virginia area along with technical assistance from Trent Nicholas, who has Inscribed the first issue. Contributors include Phil Trumbo, award-winning illustrator and animator who directed the opening of *Pee-Wee’s Playhouse*, and Hunter Jackson a.k.a. Techno Destructo a founding member of the performance rock band GWAR. The first issue was limited to 500 copies with subsequent issues limited to 1000-1500 copies each. Unfortunately just as the comic began to gain traction with nationwide distribution and positive reviews it ended when Crehore relocated to the West Coast.

It’s expensive because a guy from Gwar is in it! And it’s fun to see that there’s a connection to Gary Panter here, although slightly tenuous (via Pee-Wee Herman).