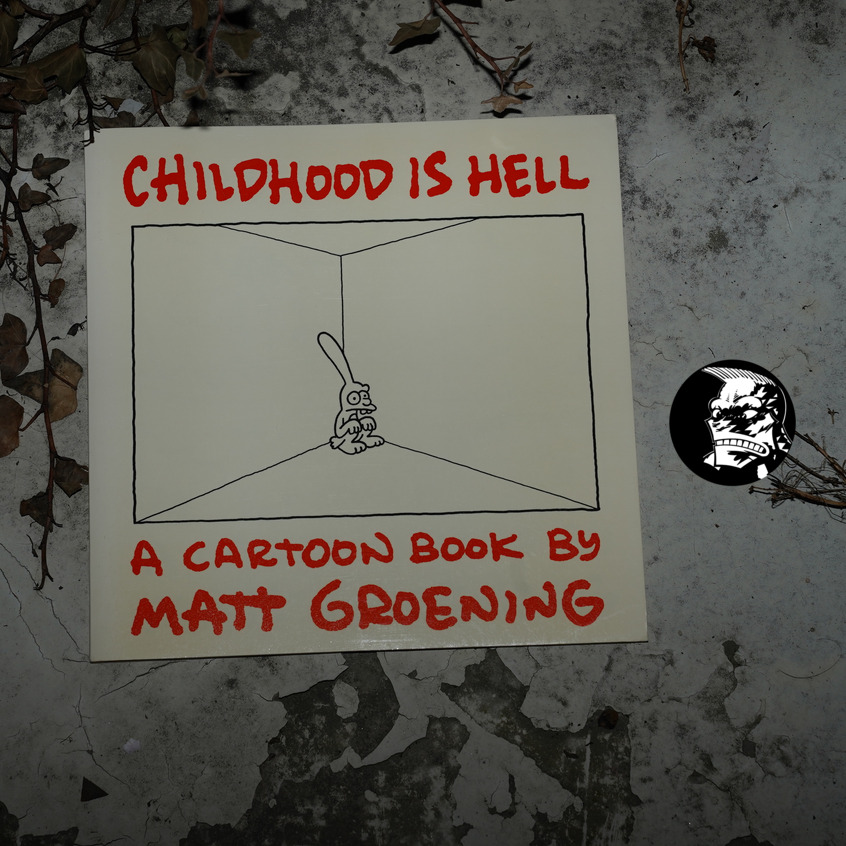 I’m slightly fascinated by the relentless drive towards mainstream (i.e., bookstore) respectability for basically all the books I’m covering in this blog series. In the pre-mainstream era, there was a certain freedom with formats — mostly stapled things, and often oddball (too large/too small) formats.

This is a fun hybrid along the way: The three previous Life in Hell collections had been saddle-stitched, and this one is, too: Notice the staples. But it also has a spine, so that it’s easier to shelve. Is it the next volume that switches to a straight-up normal squarebound format? Watch this blog channel for updates! Subscribe and share and like! 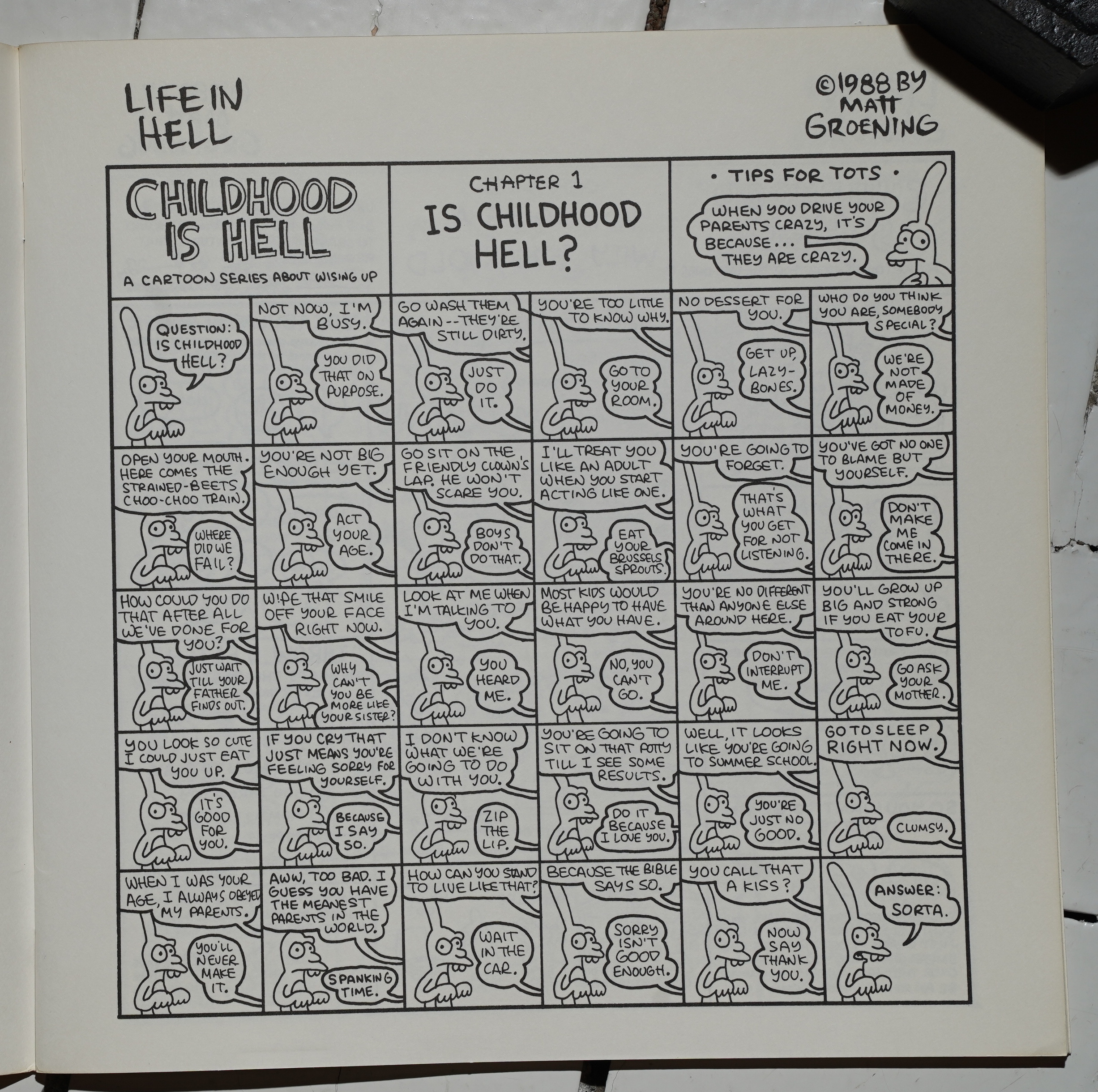 Anyway, the previous volume was School in Hell, and Groening obviously had a lot to say about being a child, so we get this, which is, like, more. Having these two come after each other is a slightly odd choice — was I the only one that thought he had this volume already for years because he’d gotten it confused with School is Hell? He was? I mean, I was? 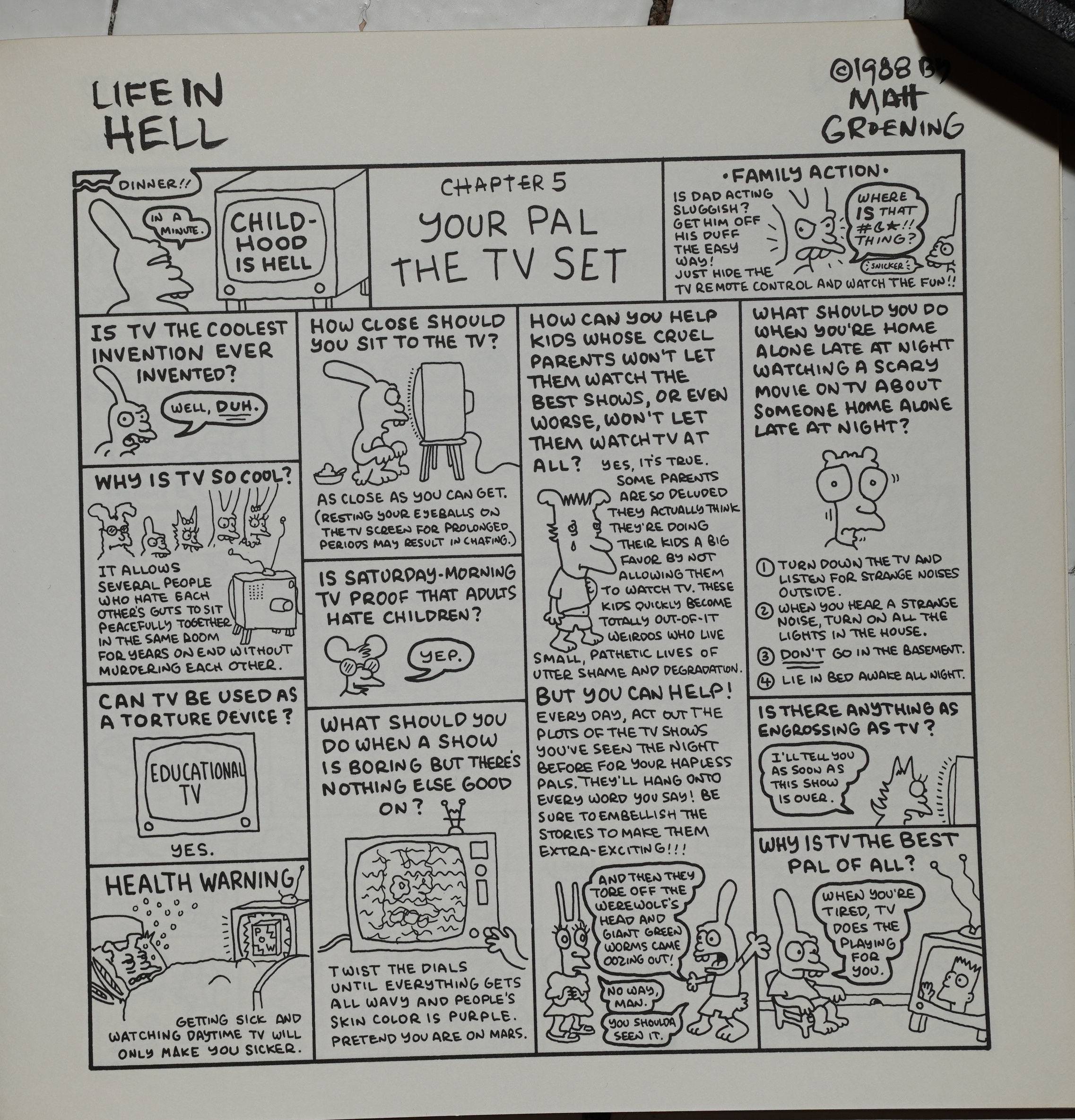 TV is the best. 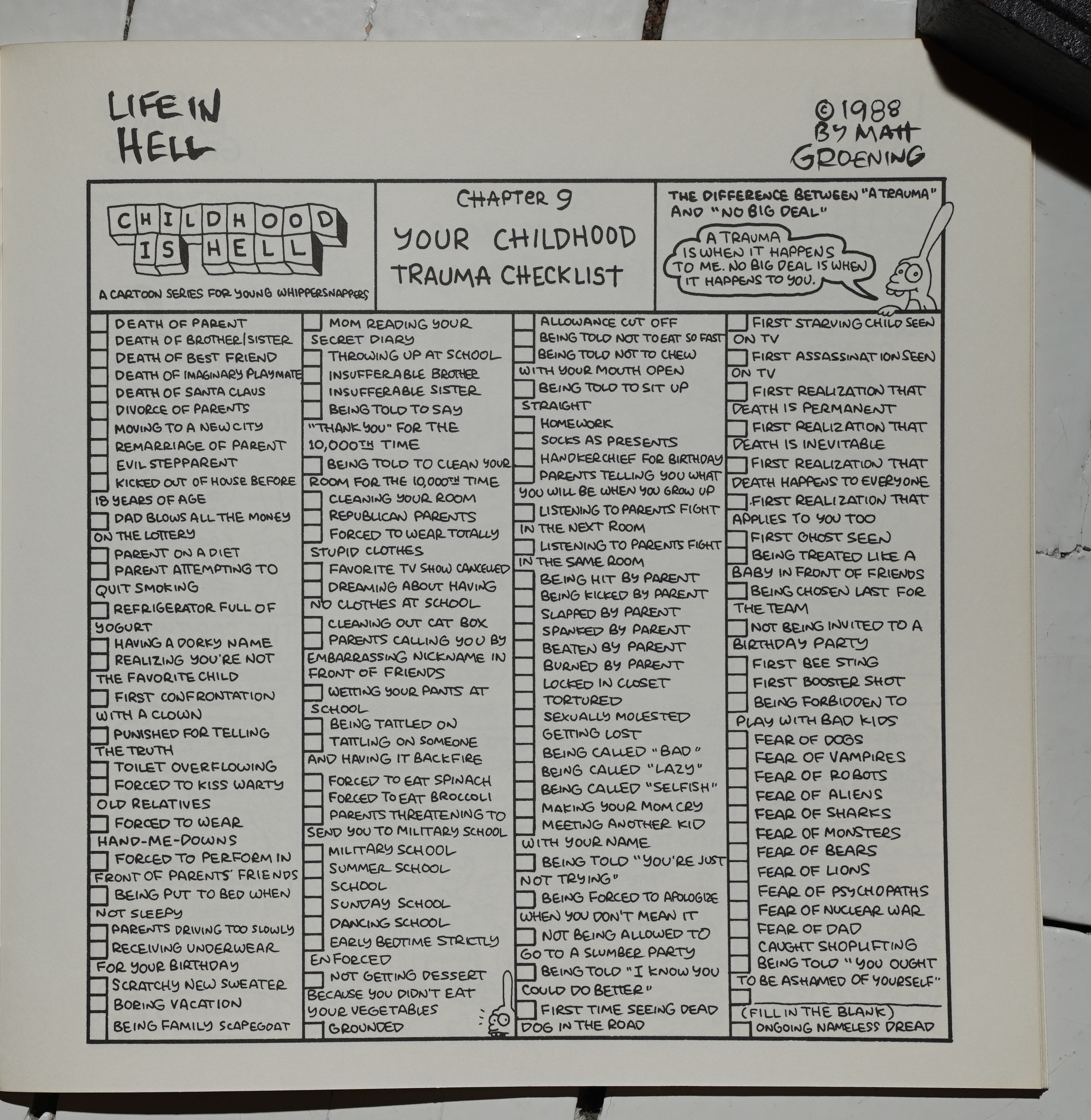 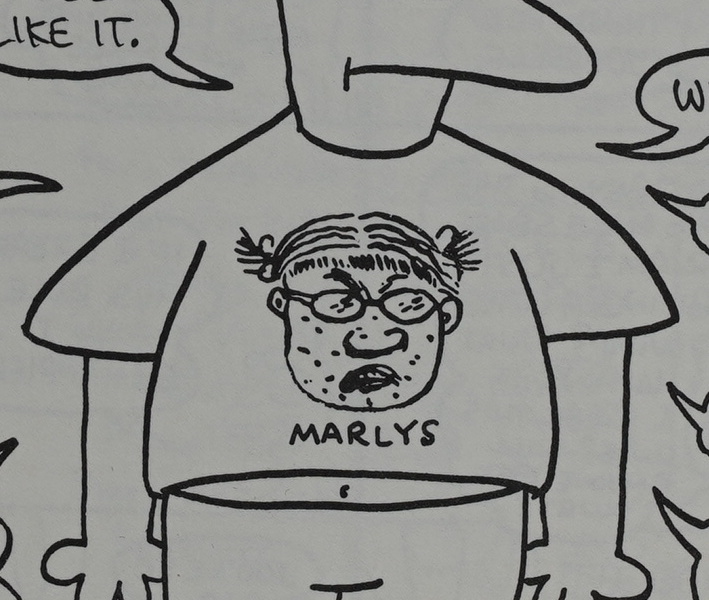 Heh. A shout-out to Lynda Barry. 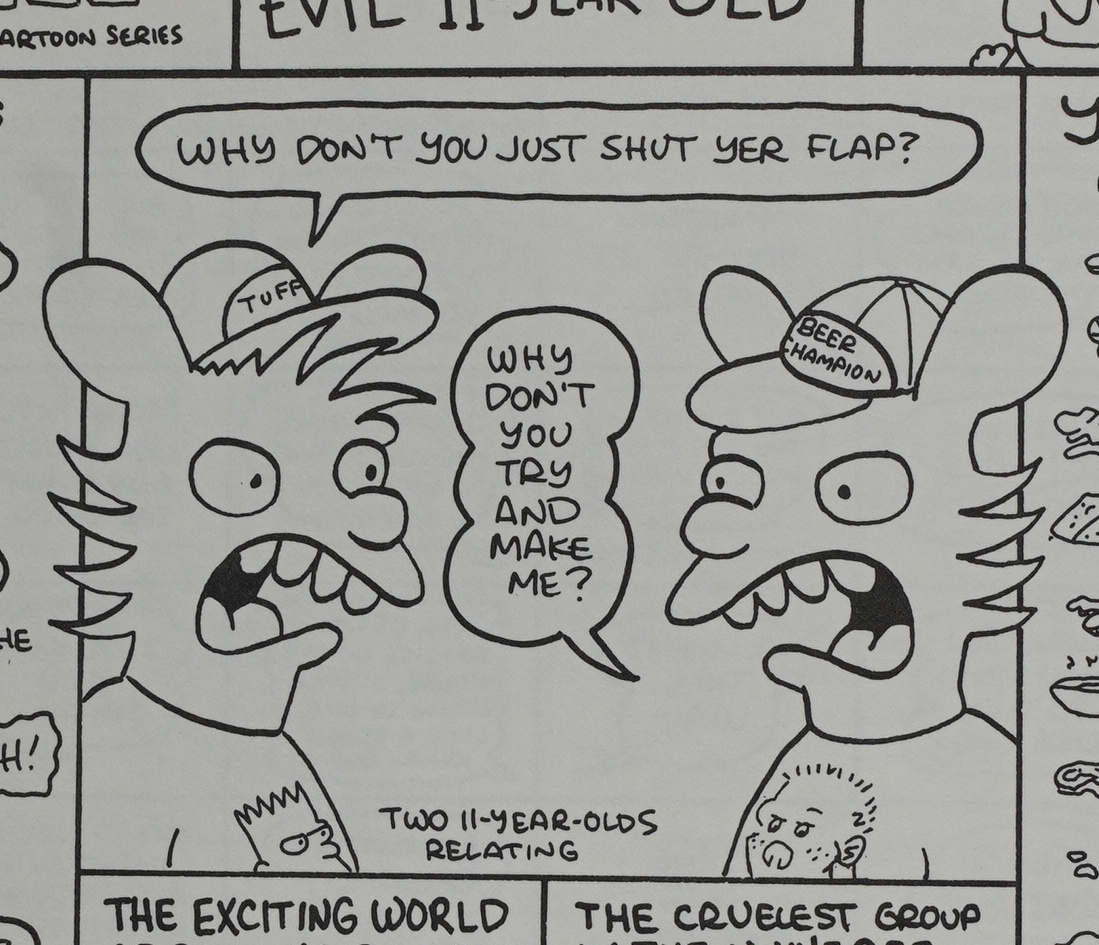 Oh, and Bart and Gary Panter’s Jimbo? Had The Simpsons started by now? Yes, indeed: 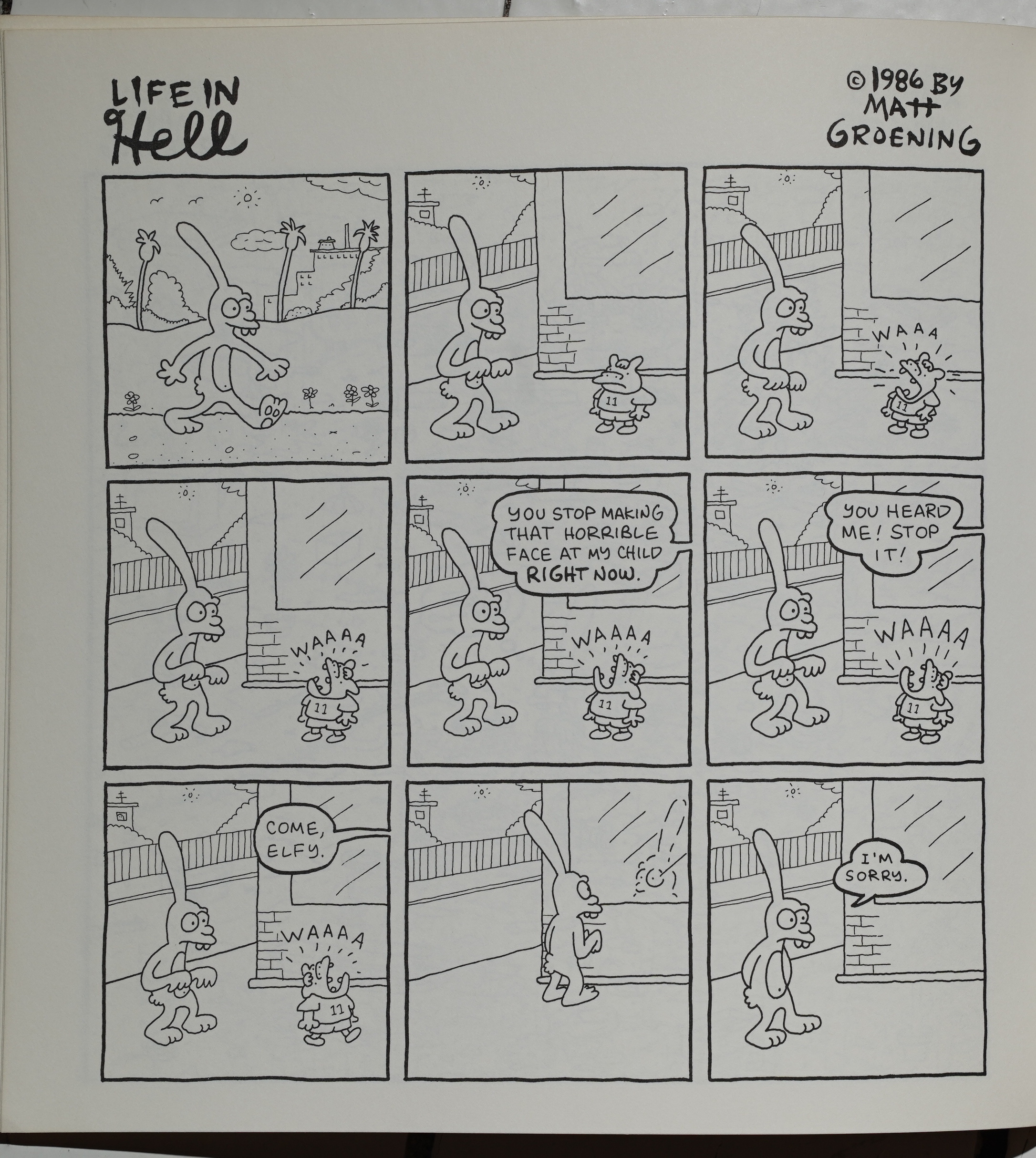 This slightly earlier strip was the only one that had me laughing out loud. 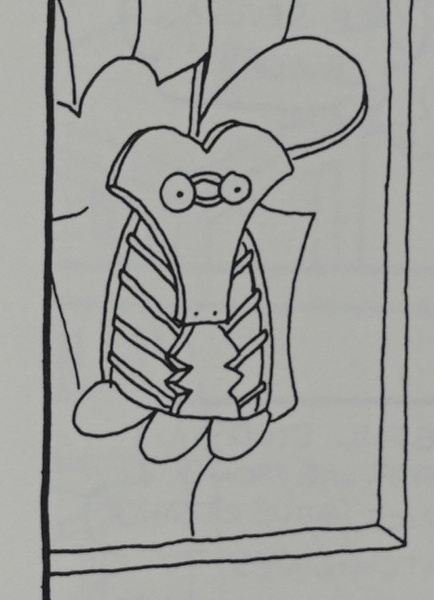 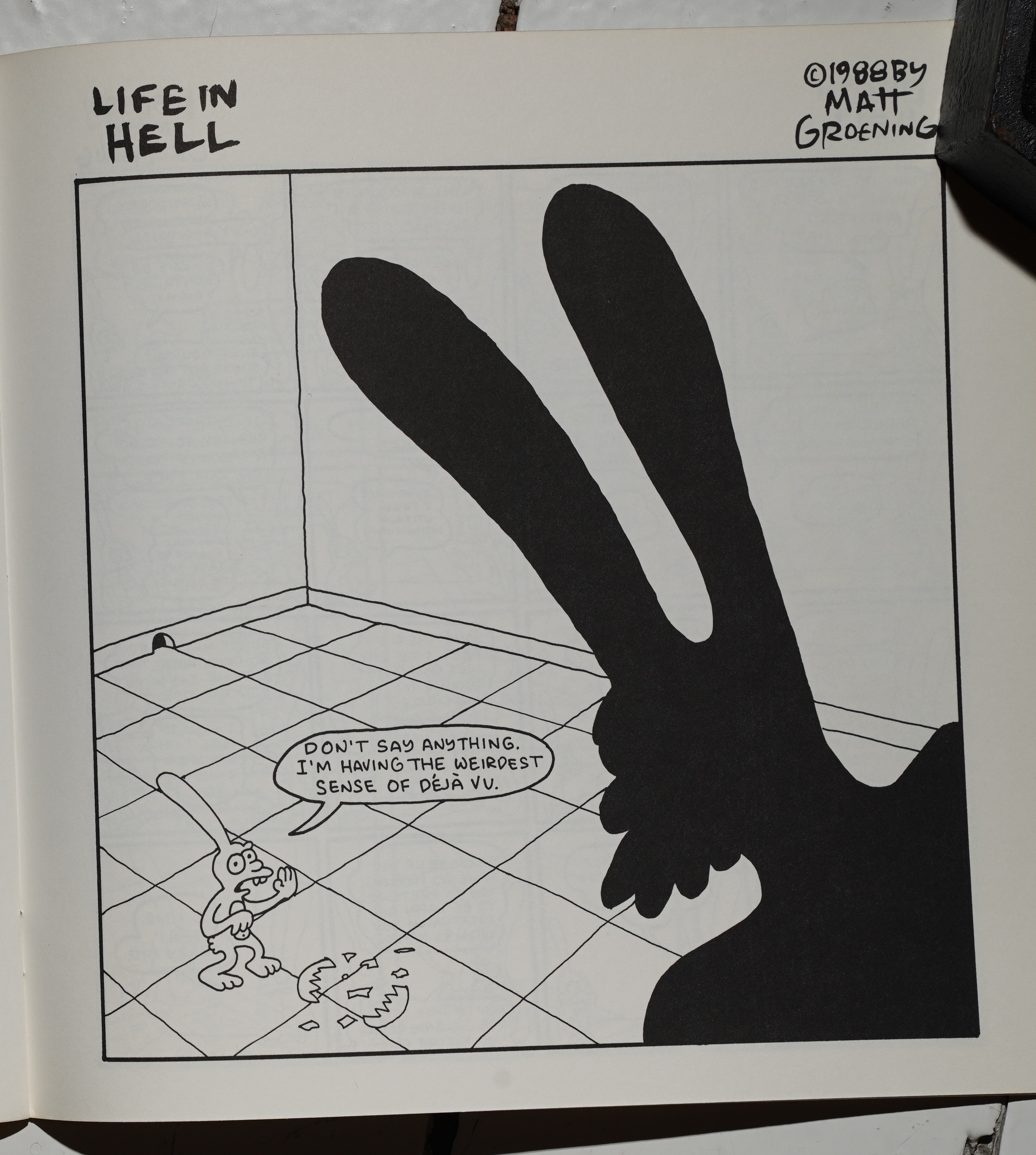 Me, too — there’s four variations on this strip in this book. The previous books only had a single one…

One of Pat Benatar’s best songs is a
powerful rocker called “Hell Is For
Children.” Its resemblance to this
latest. collection by cartoonist Matt
Groening is not limited to title alone.
Both song and book deal with cruelty
to children. Both are the product of
artists ‘Åorking at the top of their form.
And both recognize that one of the
most tragic things about childhood
trauma is any child’s inability to fully
understand it.
But there the similarity ends, for
Groening goes farther than Benatar.
He reminds us, with acidically funny
writing and deliberately crude
artwork, that childhood is a painful
and bewildering time by definition,
and not just for those of us who grow
up in abusive homes.
Groening’s main character in this
collection is a one-eared, and there-
fore ridiculous-looking, anthropomor-
phic rabbit called Bongo. Bongo’s our
host for a series of strips on How To
Act Like A Child, with different
instructions for every age from one to
12. He shows us the silly things we
considered great humor at every stop
along the way. He shows us 16 kinds
of Moms, and also 16 kinds of Dads,
Brothers, and Sisters. He includes a
strip on “Your Pal The TV set.” All
of which are laugh-out loud funny.
There are also a number of single gag
strips, which are not nearly as funny.
The scenes of Bongo getting into
trouble at school or causing a mess
in the Kitchen read like second-rate
“Dennis The Menace” or 10th-rate
“Calvin and Hobbes.”
They don’t hold a candle to high
points like Groening’s exhaustive
Childhood Trauma Checklist, which
contains over 100 items ranging from
minutiae (cleaning your room, scrat-
chy new sweater, meeting another
child with your name), to unthinking
cruelty (being told “you’re just not
trying,” being called “lazy,” forced to
perform in front of parents’ friends)
to the dmvnright horrifying (locked in
closet, tortured, sexually molested).
The cumulative effect is very funny,
but it’s an uneasy kind of funny that
conjures up our own childhoods in
more detail than we may want to
remember them, and that’s more to
the point.
And then there’s “How To Deal
With Problem Parents,” which is not
funny at all, and is not meant to be.
It should be required reading for
everybody who’s thinking of having
children. And for everybody who’s
still dealing with emotional scars
inflicted during childhood. And—
most importantly—for kids. I myself
would have found it a great boost
when I was 10, and my parents were
only imperfect human beings who
made mistakes now and then. For
children living through genuine night-
mares, this little one-page comic strip
could be, quite literally, a lifesaver.
If you know any, please, please buy
them a copy of this book yesterday.
GRADE: MINT