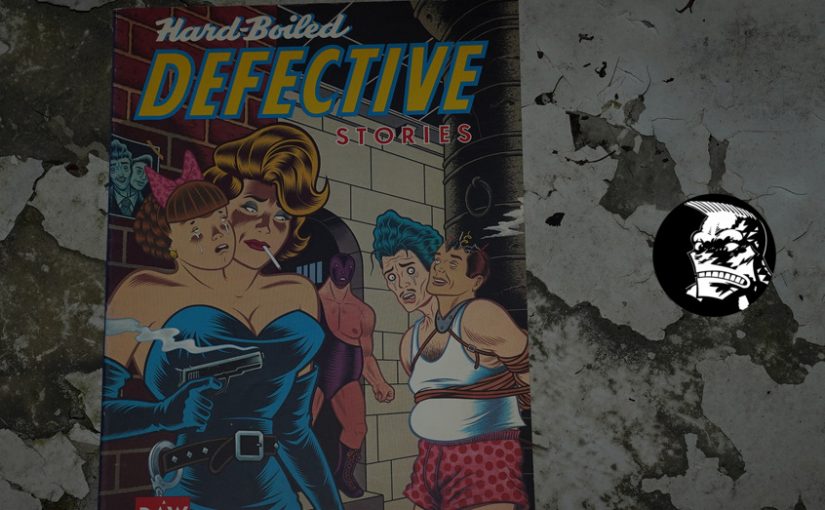 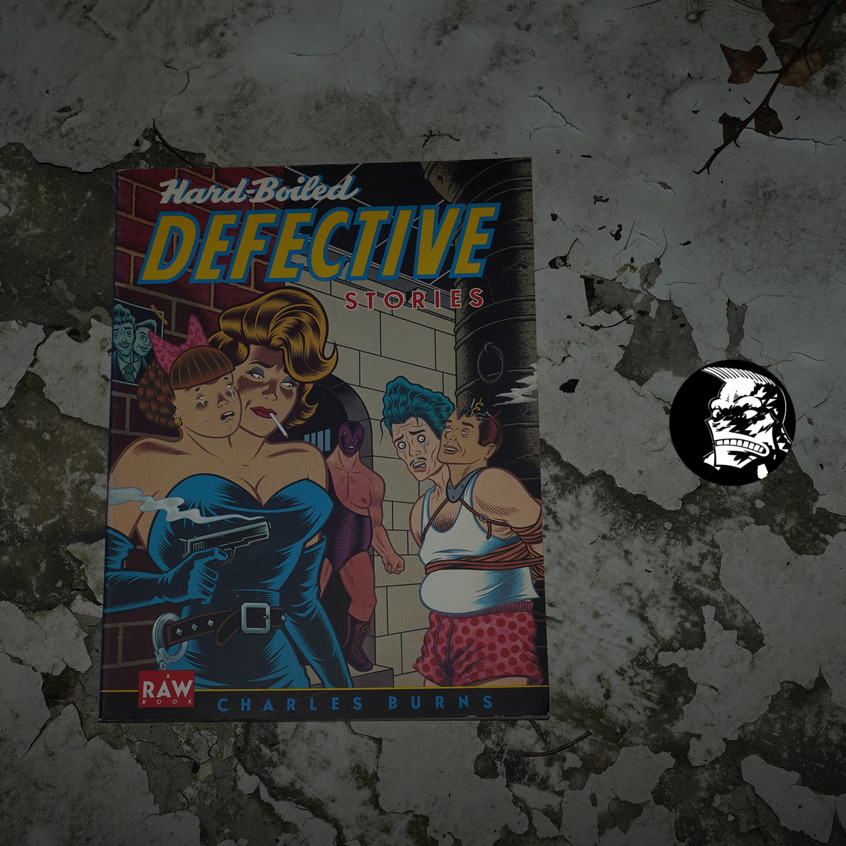 Pantheon had released only a handful of comics by this time: The Life in Hell collections, Maus I and the Read Yourself Raw collection. That is, their taste level was impeccable. Still, I remember happening upon this in a bookstore in 1988, and I was kinda… surprised? It’s a squarebound European “album” type of book, and it seemed to come out of nowhere: Burns is so meticulous, and then suddenly we get 90 pages of Burns!? WHAT?!

And that’s because it had been serialised over the previous five years as El Borbah in the Spanish comics magazine El Víbora. (Or was it in Heavy Metal? Or perhaps both? The interwebs don’t stretch all the way back to the 80s.) 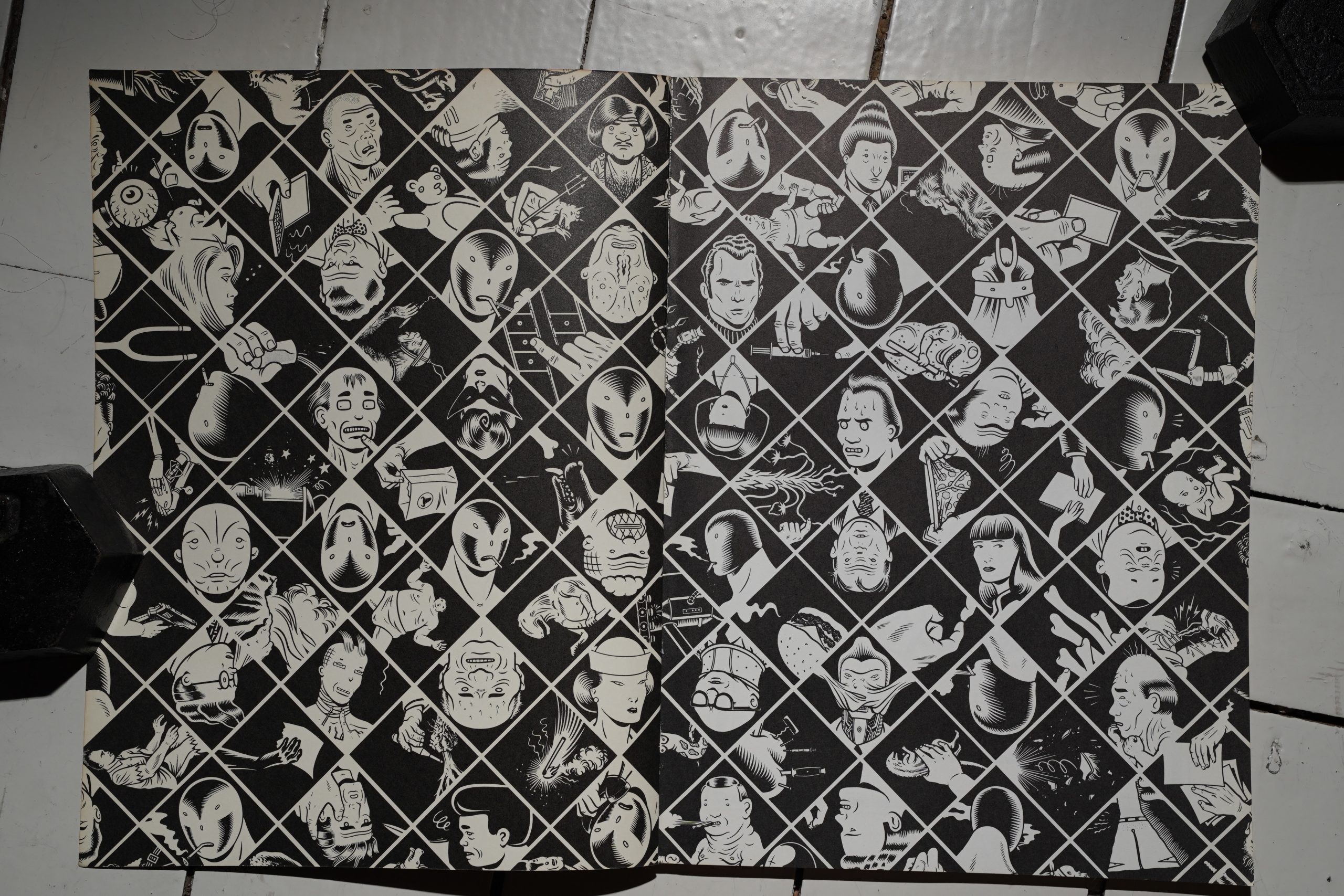 This book is stylishly designed by Mouly and Spiegelman. Love the end-papers. 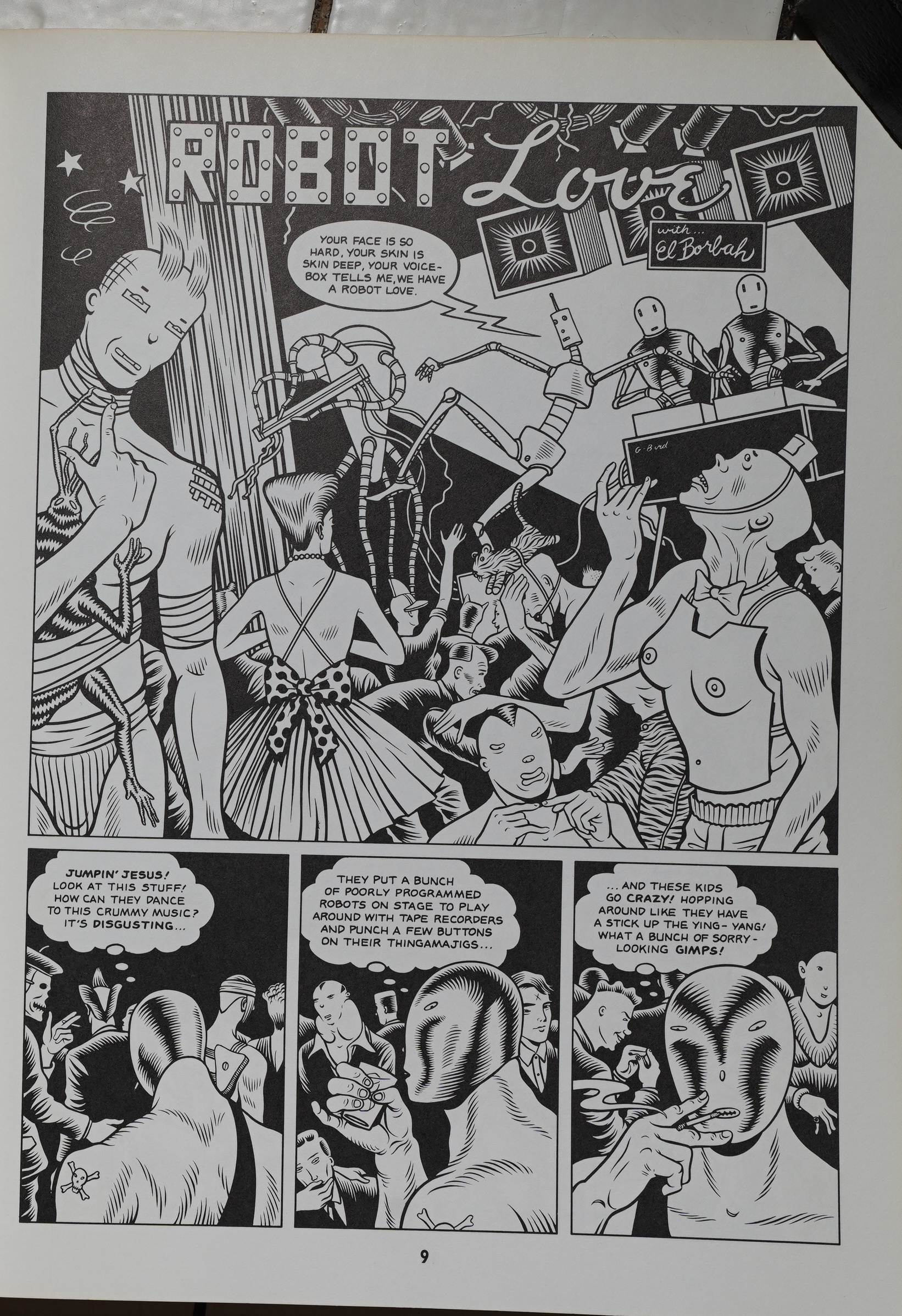 These stories were created between 1982 and 86, but it remarkable how little Burns’ style changes over those years. It’s a bit more busy at the start, though, but still very, very sharp. And is that bug on that guy’s stomach a call-back to the story he did in Raw #3? 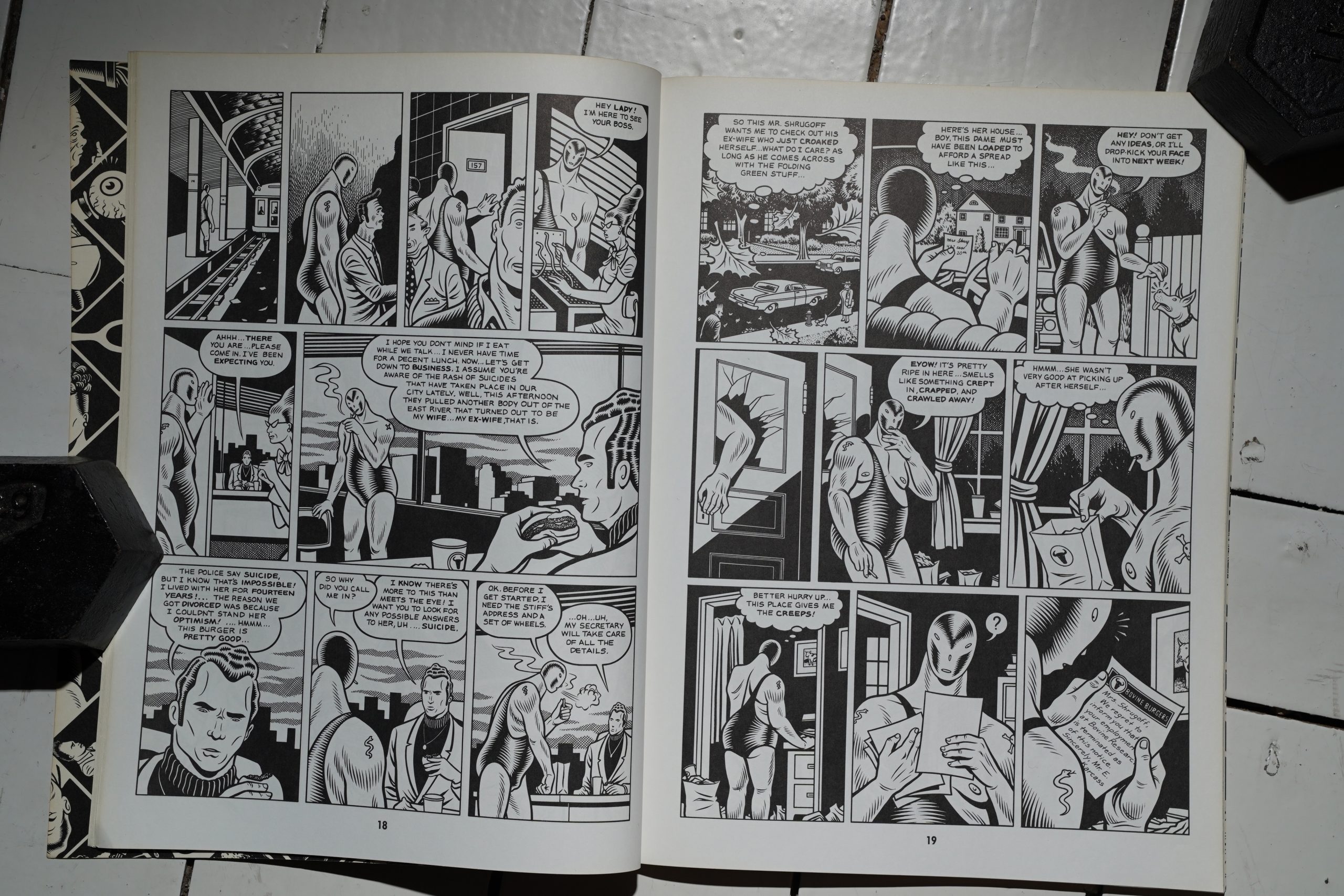 The first two stories are both less than ten pages, and then we get a twenty page story, and the a forty page story, and then another ten-pager. It’s weird how that arrangement affects how I read the book just now: It just feels off-kilter. The two first stories lulled me into a certain rhythm, and then the stories grow longer, and… I just got kinda impatient with the longer stories? I’m not sure that would have happened if not for the shorter pieces at the start, because these are pretty breezy stories. 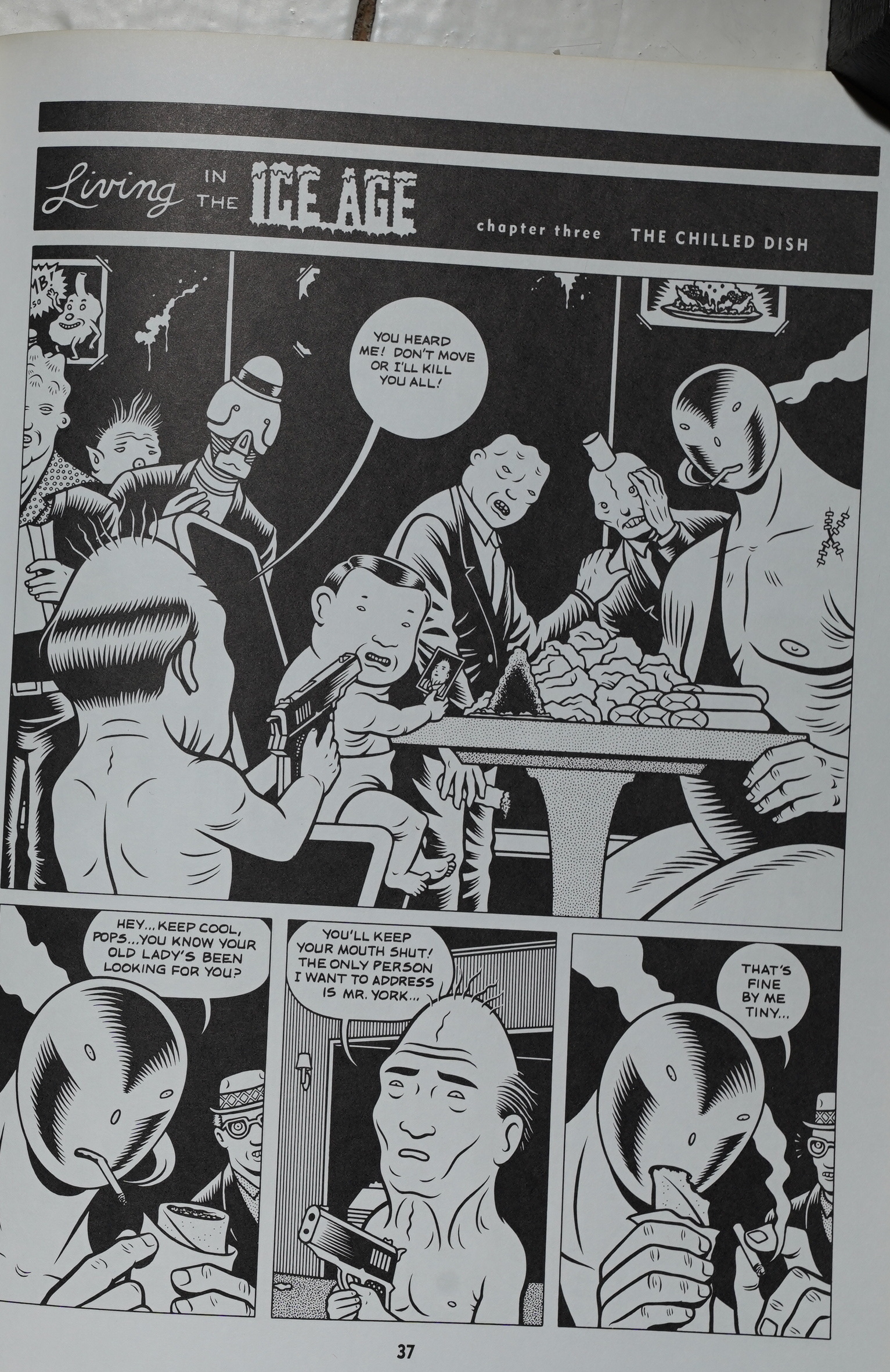 The two longer stories were apparently serialised in five-page chapters originally, so there’s still some rhythm from that, but the book just feels kinda wonky. Perhaps that explains why this is the first time I’ve re-read the book since I bought it in 88. 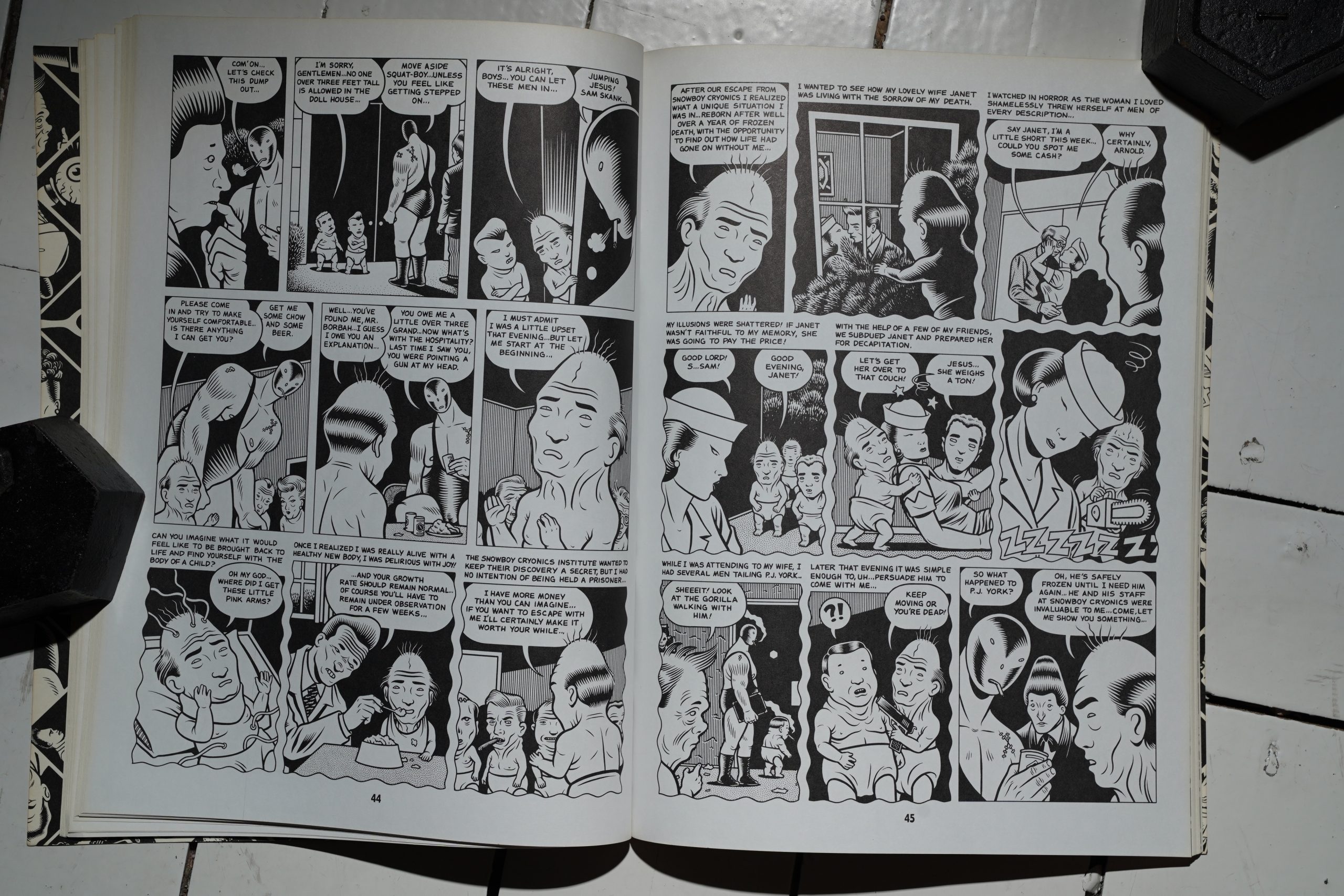 Reading this now, I’m surprised at how straightforward these stories are. Burns seems to be having great fun doing absurd 50s noir riffs, but what you see is all you get: His other stuff (like the Big Baby work, for instance) overflows with subtext and creepy implications, but there’s none of that here: It’s just goofy, bizarre fun.

Which makes me think that the title of this book is a mistake: “Hard-Boiled Defective Stories” makes you think that this is some kind of post-modern literary take on noir (a la Spiegelman’s Ace Hole or even Paul Auster’s New York Stories (which was published around this time)), but instead it’s just… this. When Fantagraphics reprinted it in 2006, they went back to the original title: El Borbah, which sounds like a good idea.

(I’m guessing the title here was invented by Spiegelman or Mouly.) 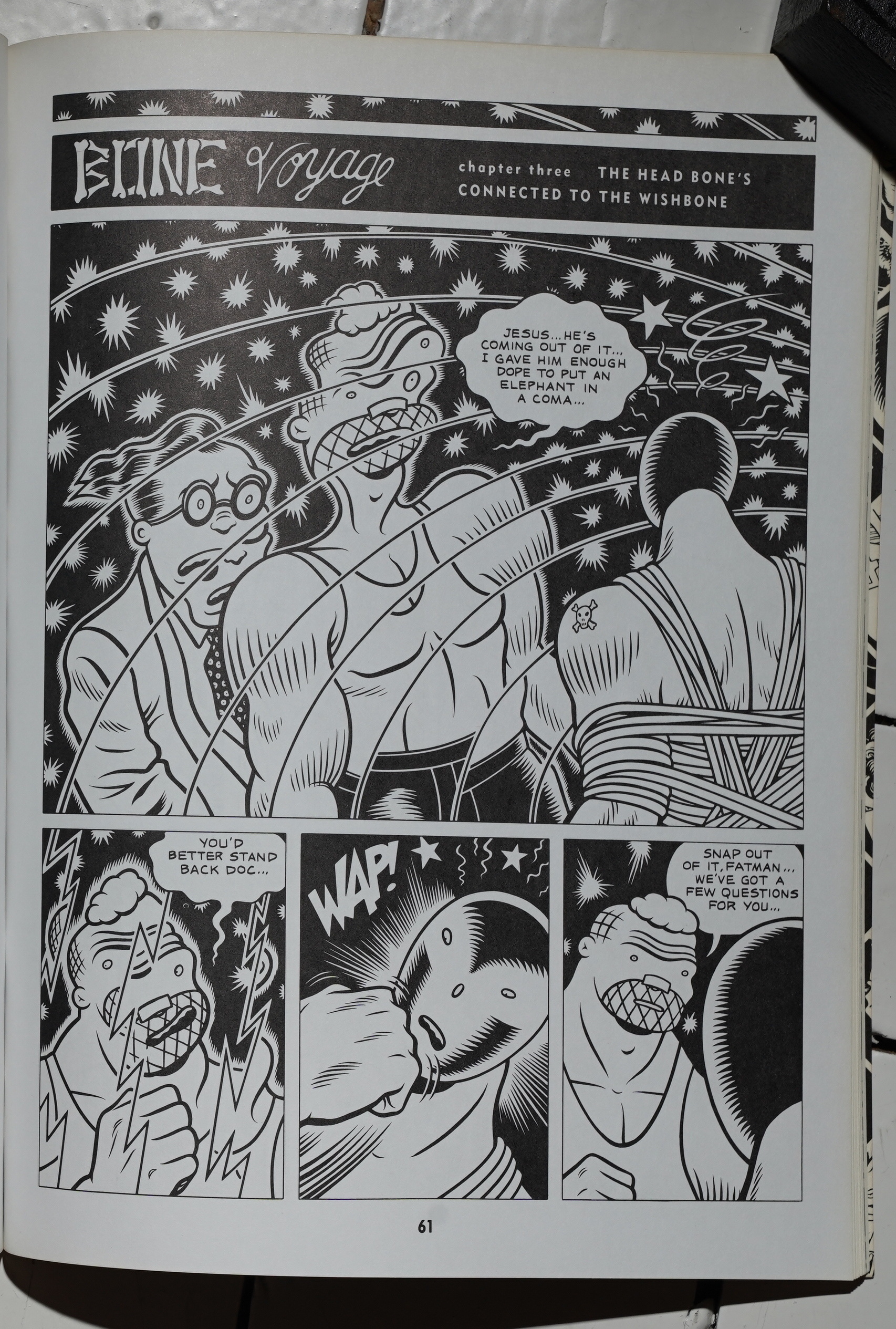 I don’t mean to say that these aren’t good comics or anything: They’re great fun, and Burns seems to have had fun when doing them, too. 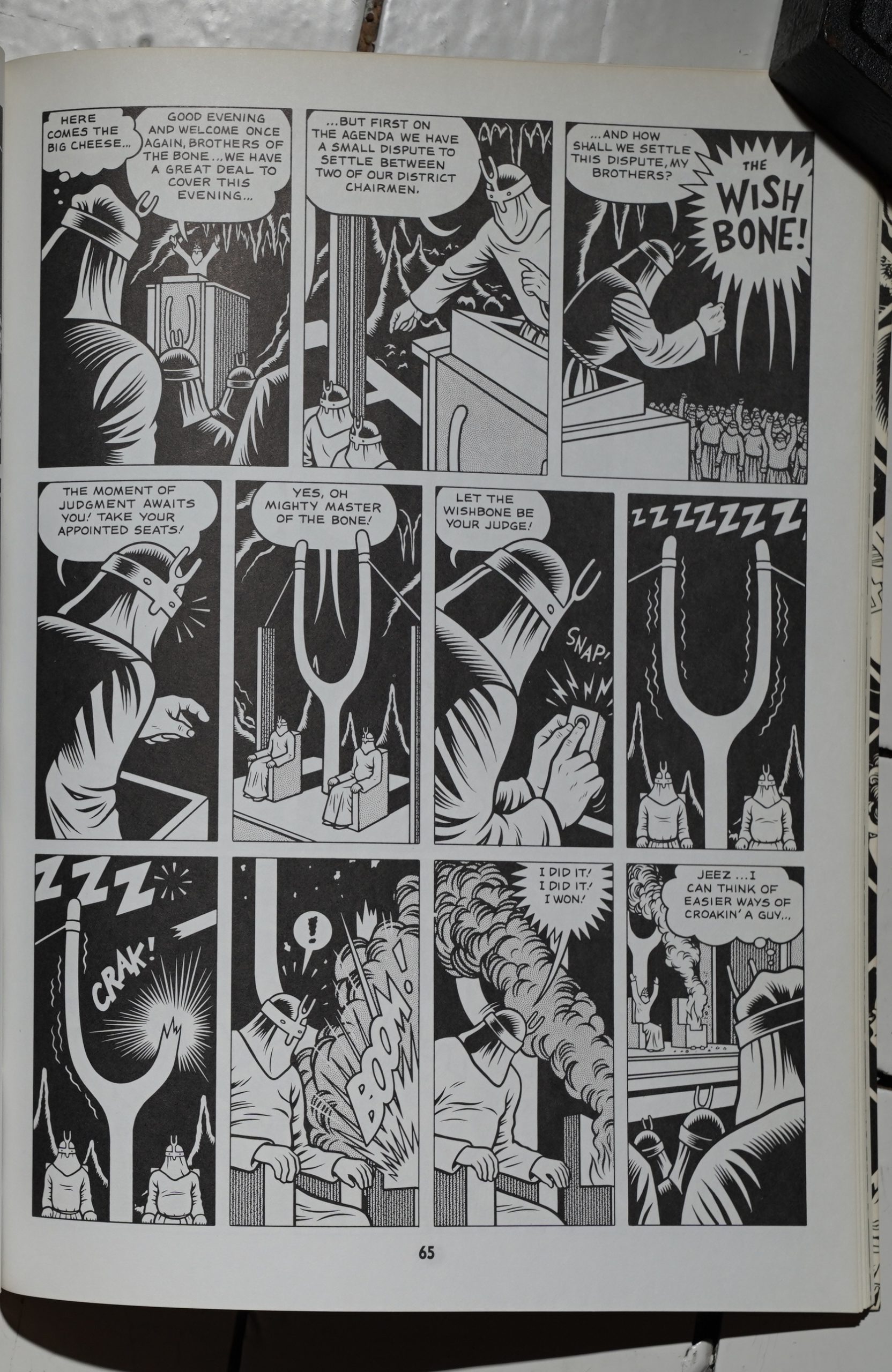 But these stories feel so tossed-off and silly… This is not a major work in Burns’ oeuvre. 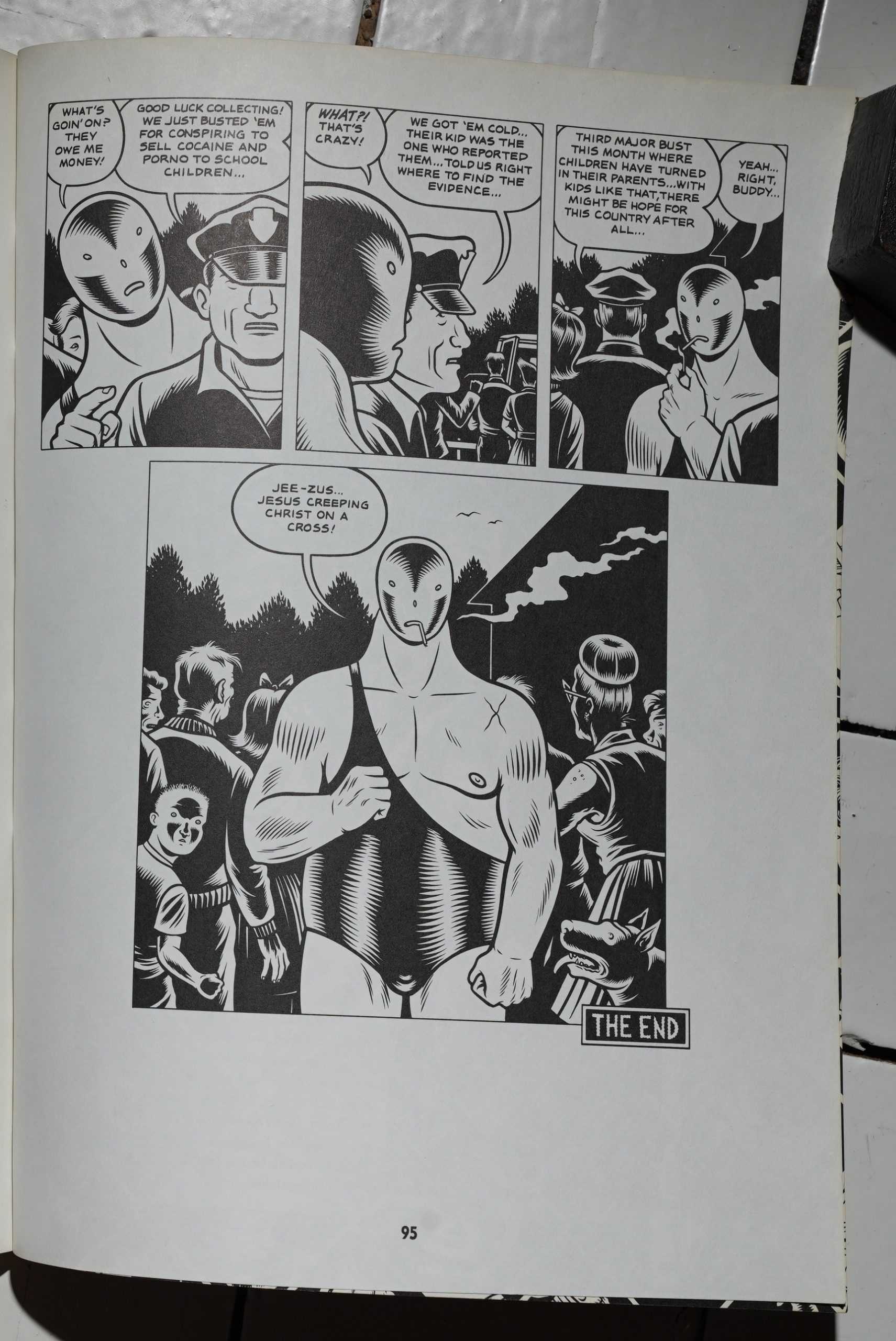 Only the final (short) story seems to strive for an emotional impact. (And it works.)

At first glance, Burns’ most recent
book Hard-Boiled Defective Stories
lacks the subversive thrust of this
family nightmare. The artist’s dis-
arming weirdness seems to be
operating in a vacuum, having
reference only to generic formulas
which are gleefully pushed to out-
landish extremes. If ‘ ‘Curse of the
Moleman’ ‘ blurs the line between the
familiar and the unknown, here Burns
refuses to define the parameters of the
world he draws us into. This pre-
sumed “future” of cryogenics, SIRrm
bank corporations (“Sperm ‘n’
Stuff”), and junk food containing
addictive additives constantly remains
just beyond our grasp. There may be
a perfectly clear reason why old men
with babies’ bodies kidnap each other
at gunpoint and saw off heads with
chain-saws, but it is scarcely one to
make us feel at home. It is the
accumulation of uncanny detail which
gives Burns’ work its spexial distinc-
tion, while his comic dexterity does
much to confound and distort all
expectations.
The title is appropriate—a group of
warped detective stories. There are
five in all, each prefaced by a suitably
garish comic-book cover and title—
Mammoth Defective, Thrilling Defec-
five, Smashing Defective, Crack
Defective and Spicy Defective. The
front cover shows Bums’ fondness for
eccentric pairings, doubles, reversals,
and oppositions. An Amazonian, two-
headed woman, fetishistically clad
(handcuffs dangle from a studded
leather belt) holds a smoking
revolver. The victim of this
presumably scorned woman is tied to
a pillar, the second of two heads shat-
tered and smoking, revealing a set of
wires, wheels and springs. To the left
is a photograph of the same man dur-
ing better days—that is, when he still
needed two hats. Each Of the two left-
handed heads are in tears, the two
right ones displaying vengeful
satisfaction and wistful oblivion,
respectively.

Burns has
previously suggested a suspicion Of
mass media, and his hero here is
entirely molded by it. The opening of
one story shows him laughing
uproariously at a newspaper story
about a dismembered body found in
a freezer; and his office is littered with
casual pornography hinting at a less
amusing side to his aggression (a
magazine entitled “Bongo Butt”
depicts a voluptuous woman tied up
in preparation for beating). The
infantile callousness of Big Baby (one
RAW story showed him dismember-
ing toy soldiers with cold precision)
has blossomed into a fully-formed
regressive individualism. But there is
no moralizing here; nor can the book
be reduced to a “warning” about the
future. The approach is decidedly
cold, constantly at a distance, and
refuses to adopt a comfortable or con-
sistent tone—it’s often comic when
one might expect it to be horrific , and
Vice versa.

Burns’
attention to detail
approaches someone like Will Elder,
but Elder was seldom quite this odd.
A nightclub singer croons, “When
you wish upon a bone… Just make
sure that bone’s your own”; the
nightclub scene in ‘ ‘Robot Inve”; the
flattened perspective which creates
the appearance, in “Dead Meat, ” of
gigantic falling leaves which seem set
to crush helpless pedestrians; in the
same story the office of Bovine
Burgers is adorned by a portrait of
hanging carcasses, while a “Thank
you for not smoking” sign is mocked
not only by Borbah lighting up but by
the belching industrial chimneys
visible through the window. It is often
the juxtaposition of formularized im-
ages with irregular twists; a true
Romance couple spied on by a
shrunken figure; a woman questioned
by Borbah, unexplainably accom-
panied by a sunken-eyed child wear-
ing some sort of oxygen mask.
Hard-Boiled Defective Stories is not
an easy book to describe or
categorize. It encompasses parody,
formalism, cynical speculation, and
violent, surreal black humor. One
thing is clear. No other comic-book
artist is producing work quite like
this.

1. Why I Think This Sort of Pulp
Revivalism is Bullshit When Charles
Burns Does It But Not Bullshit When,
Say, Frank Miller Does It—

Well, I mean, it’s still bullshit on a
certain level when Miller does it, but
it’s bullshit that’s true to itself. The
hard-boiled detective genre is
dangerously close to self-parody at the
best of times. and the only way to get
something worthwhile out of it is to
convince the reader that these lives
and these events do mean something,
that they are serious matters. at least
to the author. There•s something
distastefully half-assed about these
smirky, condescending parodies of the
genre. The aim usually is to give the
readers the visceral thrill of trash
while reassuring them that they’re
really too good for this sort of thing.
The unasked question is, if you’re too
good for it, why even bother with a
parody? El Borbah is the kind of
reflexive antihero that is every bit as
shallow as any reflexive hero. There’s
this army of cementhead cynics out
there who cultivate an air of ironic dis-
dain and self-serving fatalism about
the horrors around them. This attitude
is almost always coupled with a
morbid fascination with depravity El
Borbah uould seem calculated to cater
to that attitude.

To begin with, Burns does have a
legitimate use for the detective
character: His ability to get into
bizarre situations. While El Borbah
has the potential of turning the stories
into empty exercises in cynicism, he’s
so out of context with the rest Of
Burns’s work—and, indeed, the
stories he’s telling here—that you have
to think he was only there to make the
stories more palatable to Heavy
Metal’s editors. Burns’s subject in
these stories is dehumanization, and
while El Borbah might say, “Fuck it,
give me the money and I’ll get some
Mexican take-out.” Burns certainly
doesn’t. If he doesn’t see any
immediate way out of it,
it’s not
fatalism but the realization that the
“victims” are wholehearted ac-
complices in their own dehumaniza-
tion. I think in this way Burns comes
much closer to capturing the spirit of
Chester Gould then Marti does
through appropriating Gould’s style
(not that that’s necessarily his inten-
lion). It’s understandable that Burns
doesn’t have any answers; he’s dealing
with one of the great dilemmas of
modern democracy He is at least try-
ing to shock his readers into
self-recognition.

BURNS: In a funny way, it seems like there
are parameters that are really clearly defined
now. I remember When did a collection
called Hard-Boiled Defective Stories for
Pantheon Books back in 1988, I didn’t real-
ly know what the audience for that kind of
book would be. Maus had just come out
and there was all of this talk, all of these
magazine articles about comics not being
just for kids anymore. 1 had no idea how
my book would do. Maybe it was going to
be successful? It was being put out by a big
publisher and it was going to be sold in reg-
ular bookstores and we were all hoping for
the best. It did relatively 0K, but it didn’t
go into a second printing and just kind of
got lost. None of the “graphic novels” that
came out around that time lived up to the
expectations of the publishers and that first
wave Of interest in comics for adults or
whatever you -Vant to call them just kind of
fizzled out. At this point in my life I’m
aware that ther& an audience for my work,
but it’s not a huge audience; it’s not going
to double or triple. It’s not something that’s
snowballing. Despite that, I’m aware that
this is something that I’m going to stick
With and enjoy doing. I could be wrong.
Maybe Black Hole Will come out as a movie
and my comic sales will go through the
roof, but I’m not counting on it.
SETH: There was a real optimism in that
period — a genuine belief that comics were
heading somewhere. There was a feeling in
the air that some sort of evolutionary pro-
gression was taking place. The underground
comics had set the stage and now a brand
new breed of comics was going to open the
door to a wider audience; a serious adult
readership. It really seemed not only possi-
ble, but likely. don’t know what happened.
Here at the end Of the 20th century (or so)
I definitely do not feel that sort of opti-
mism about our future. That feeling evapo-
rated.

Yup; the first wave of Comics Aren’t For Kids Any More fizzled toot sweet when nothing sold but Maus… and it took publishers almost two decades to figure out that what people wanted was auto/biography, and that Maus wasn’t a singular one-off.