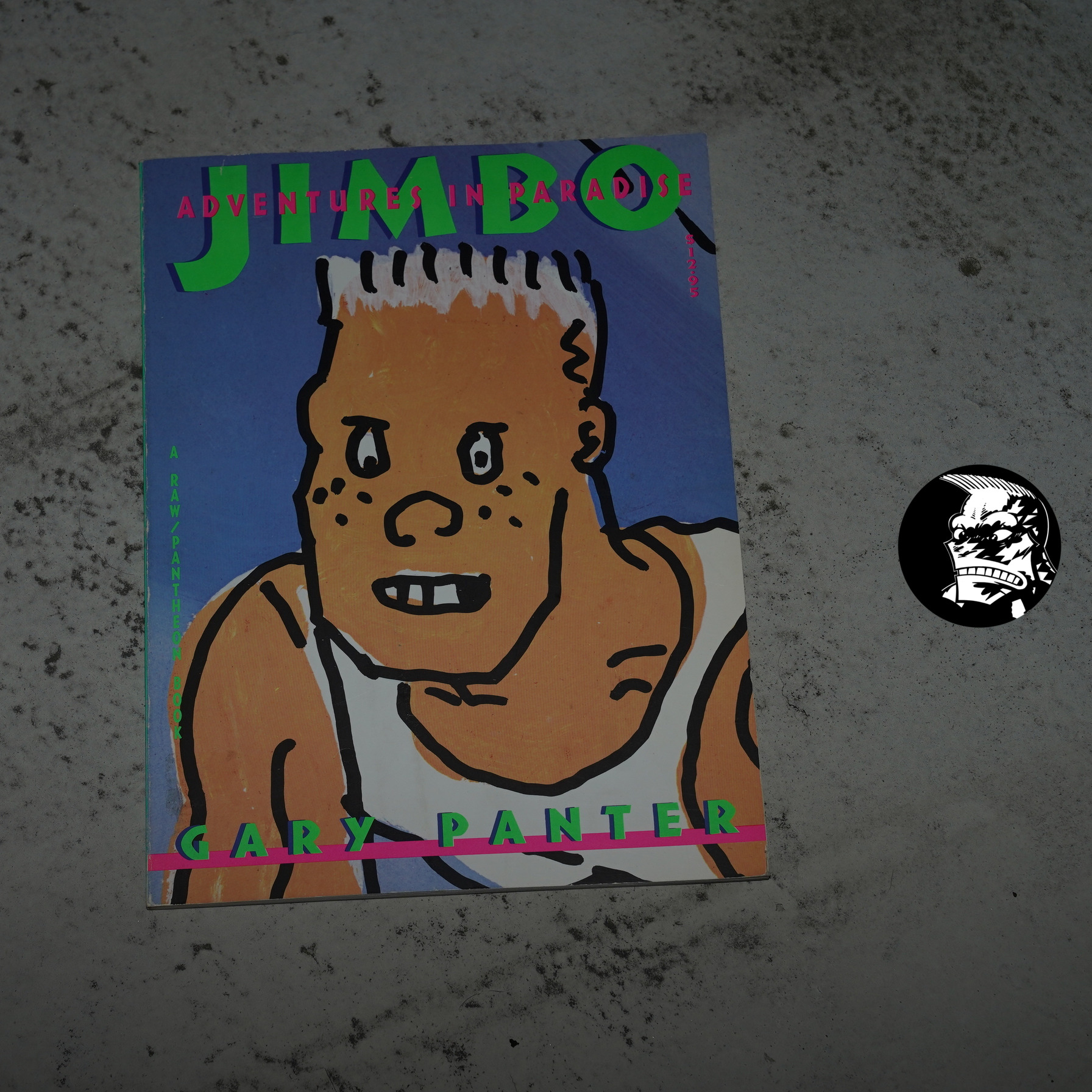 This Jimbo book is published by Pantheon Books in a less extravagant size than the previous two incarnations. And instead of being saddle-stitched, it’s squarebound, and both of those things make this seem like a more serious, less wild publication.

Perhaps it’s to counter that that they’ve gone with this illustration on the cover? It doesn’t look much like Panter, unfortunately. OK, I’ll say it: This cover is just really ugly, what with the drop shadows and a colour palette from hell. It’s very 1988, but in all the wrong ways. 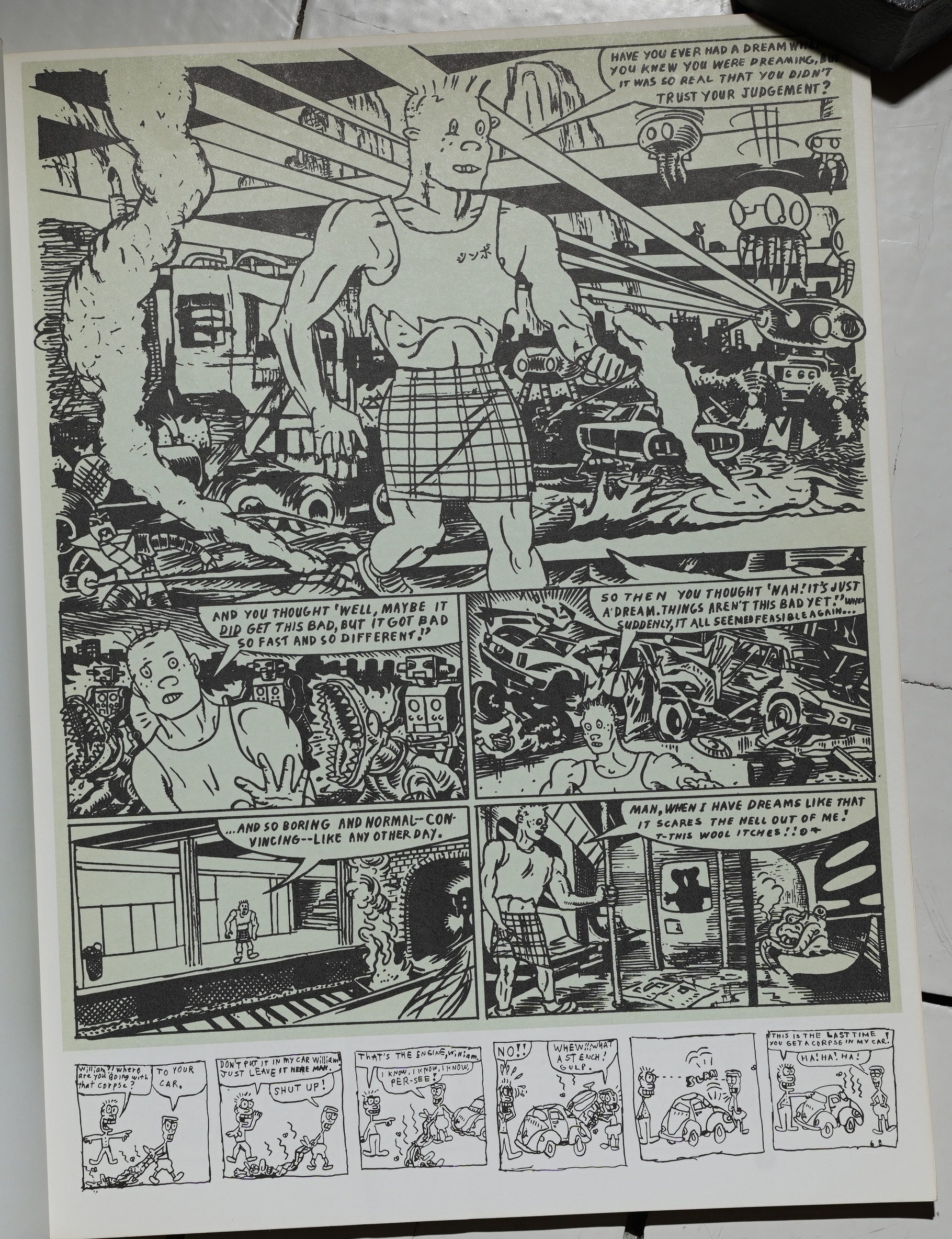 We start off with two prequel stories to the main story (sort of). These are printed on these sickly green-looking backgrounds, and seem to be drawn in 1987 (while the original stuff was made in 79-84). 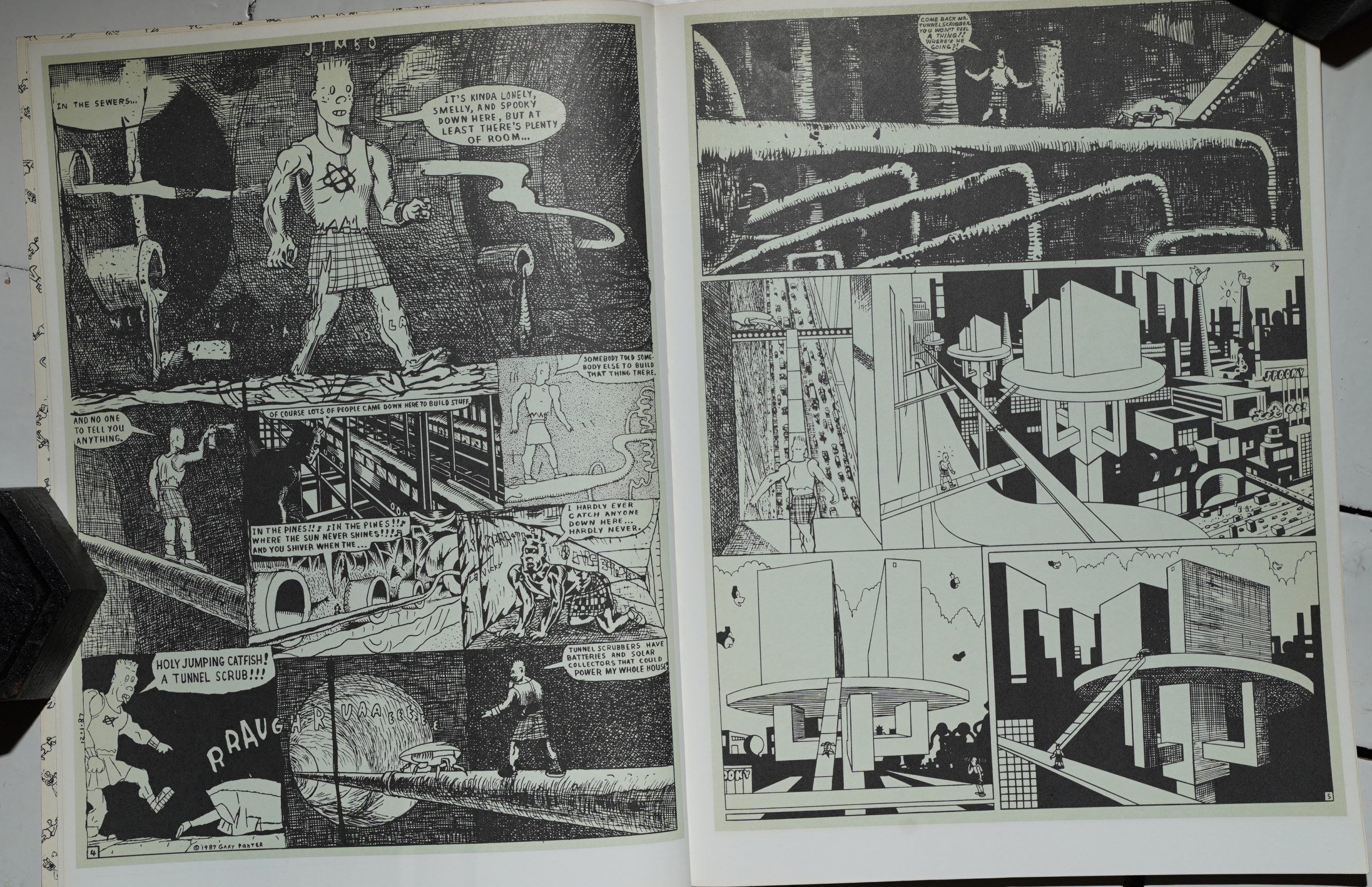 The artwork’s definitely more consistent — Panter was trying out new things on every page back in 79 — but it’s kinda… staid, almost? 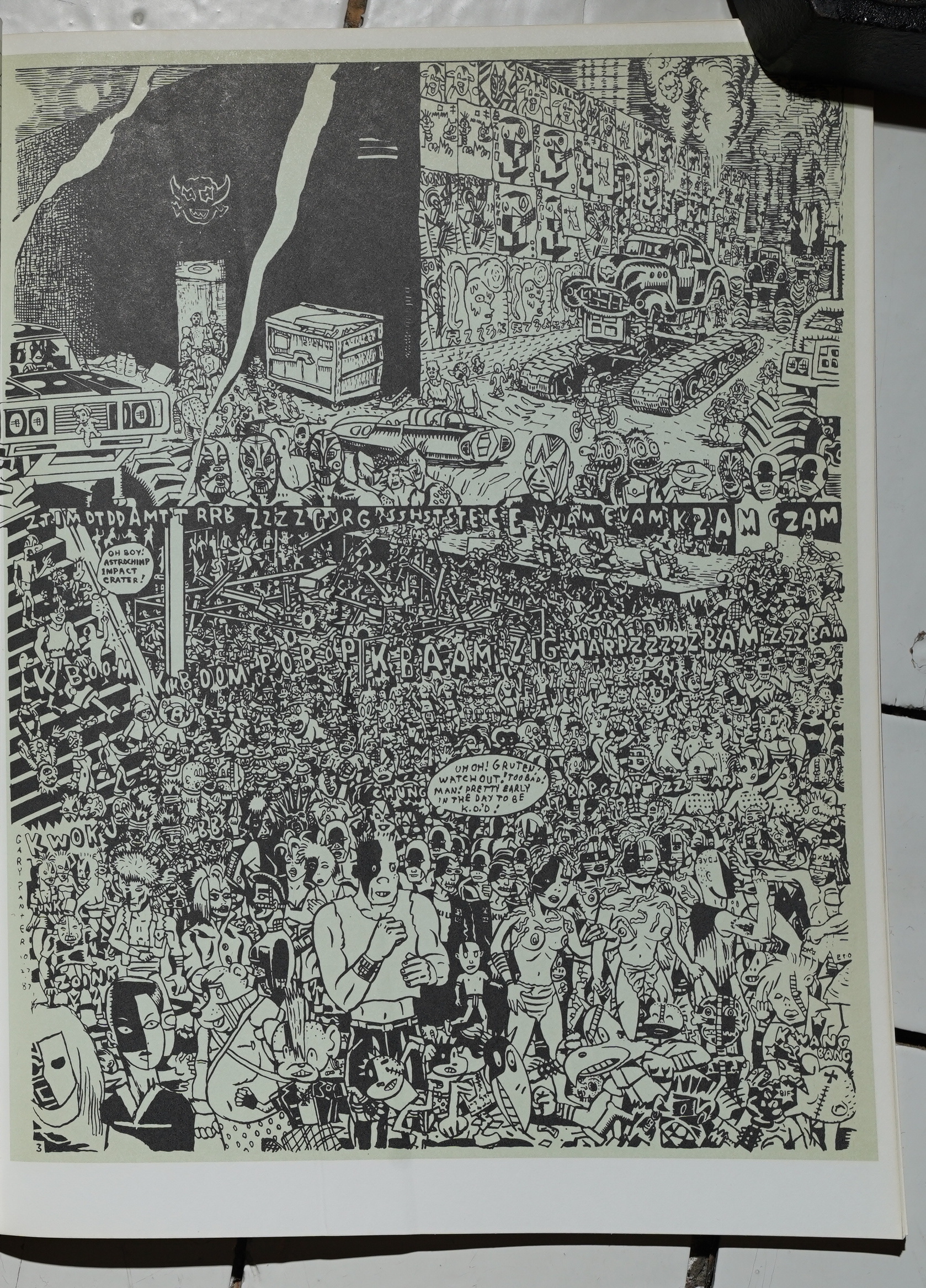 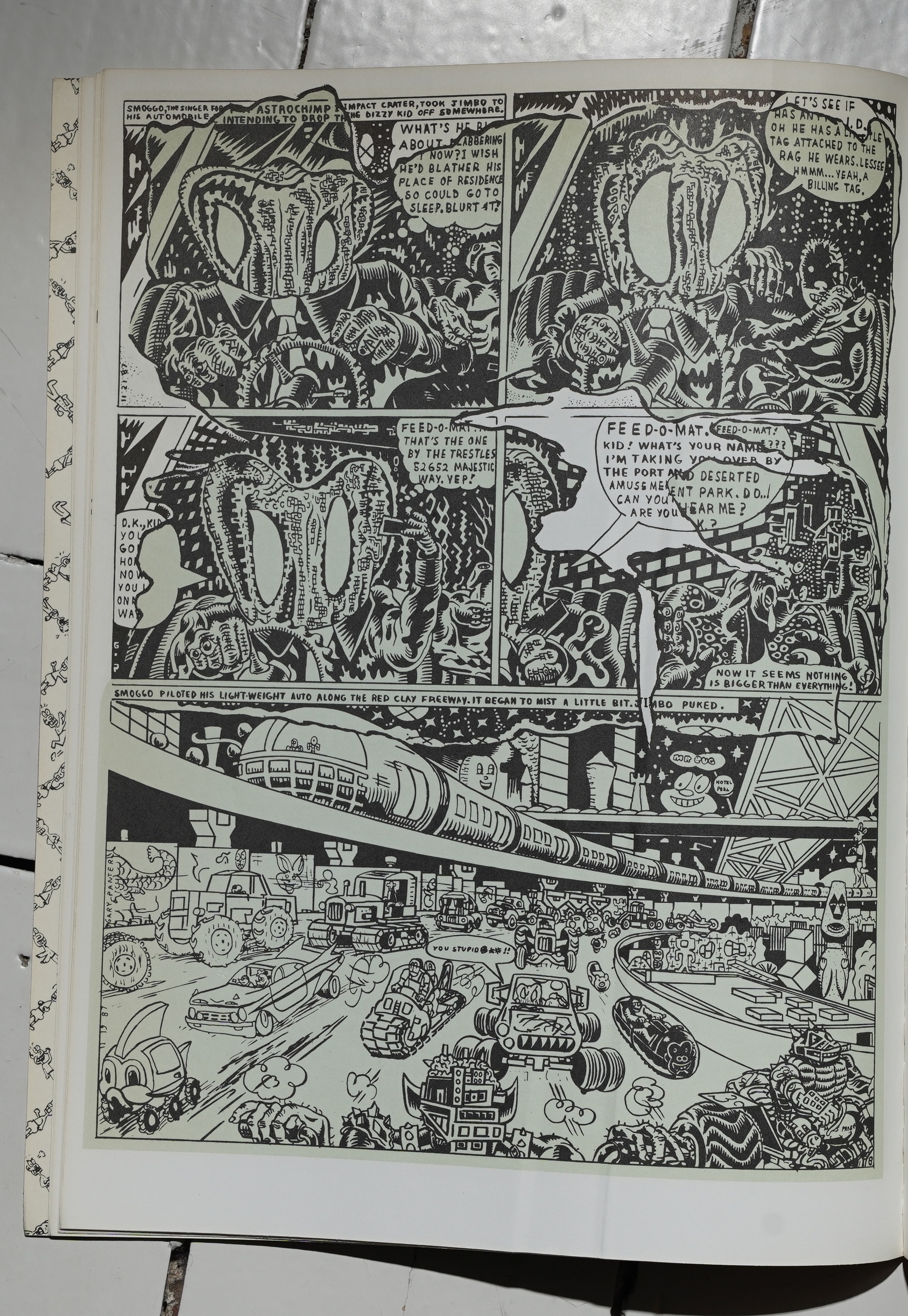 After having just read the original series, I was pretty impatient with this stuff: The original Jimbo was funny and goofy; sure, but it felt vital and important. This is basically just a druggy joke.

I mean, it looks good, but… 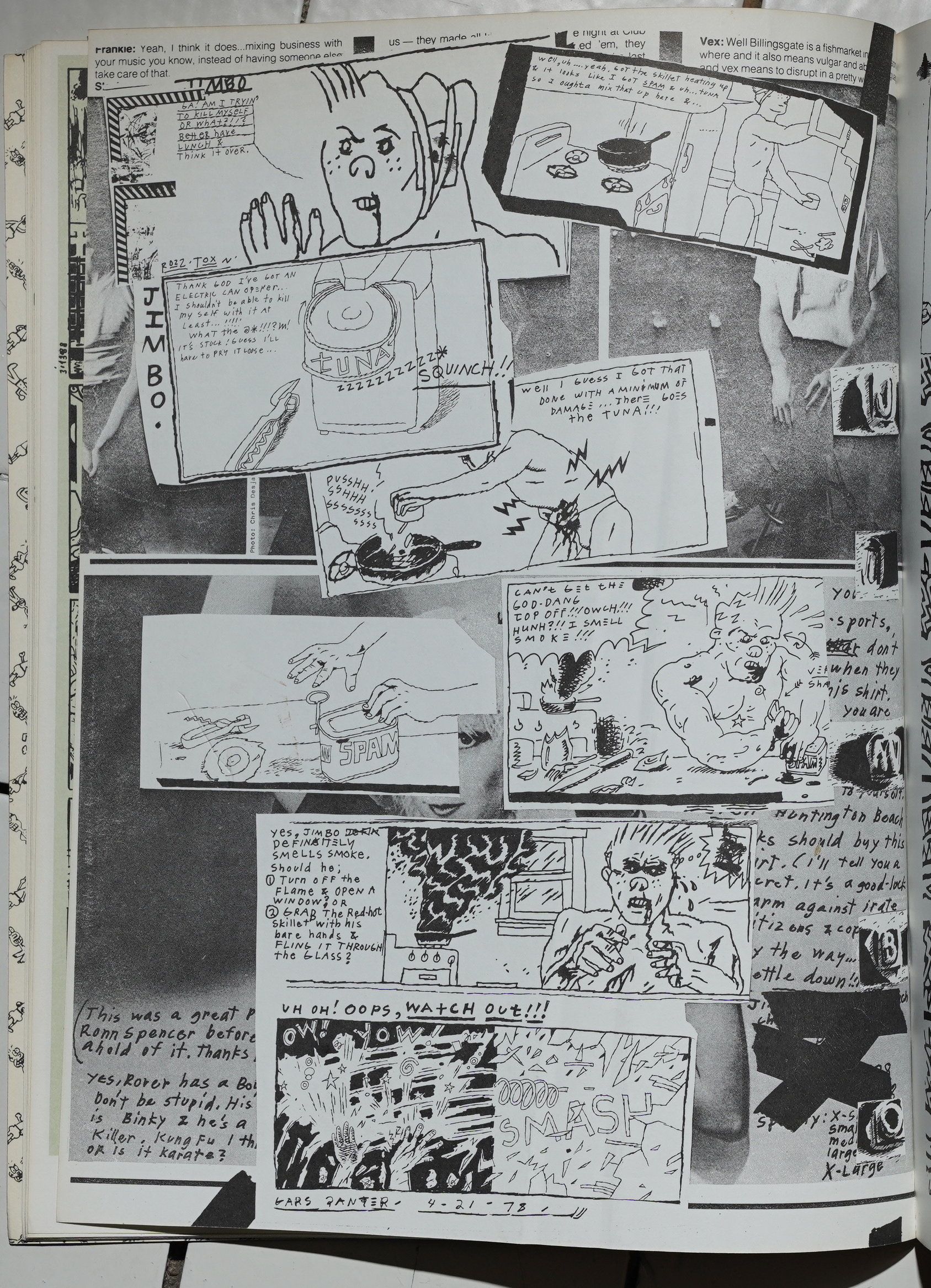 And then we get to the meat of the book: The Jimbo strips that originally appeared in Slash magazine. This is probably the best reproduction they got (so far): The Raw One-Shot version was on newsprint, and the Japanese edition had some ink gain. I guess the printers Pantheon used were more… er… professional.

But I still think it looked better in the One-Shot edition. 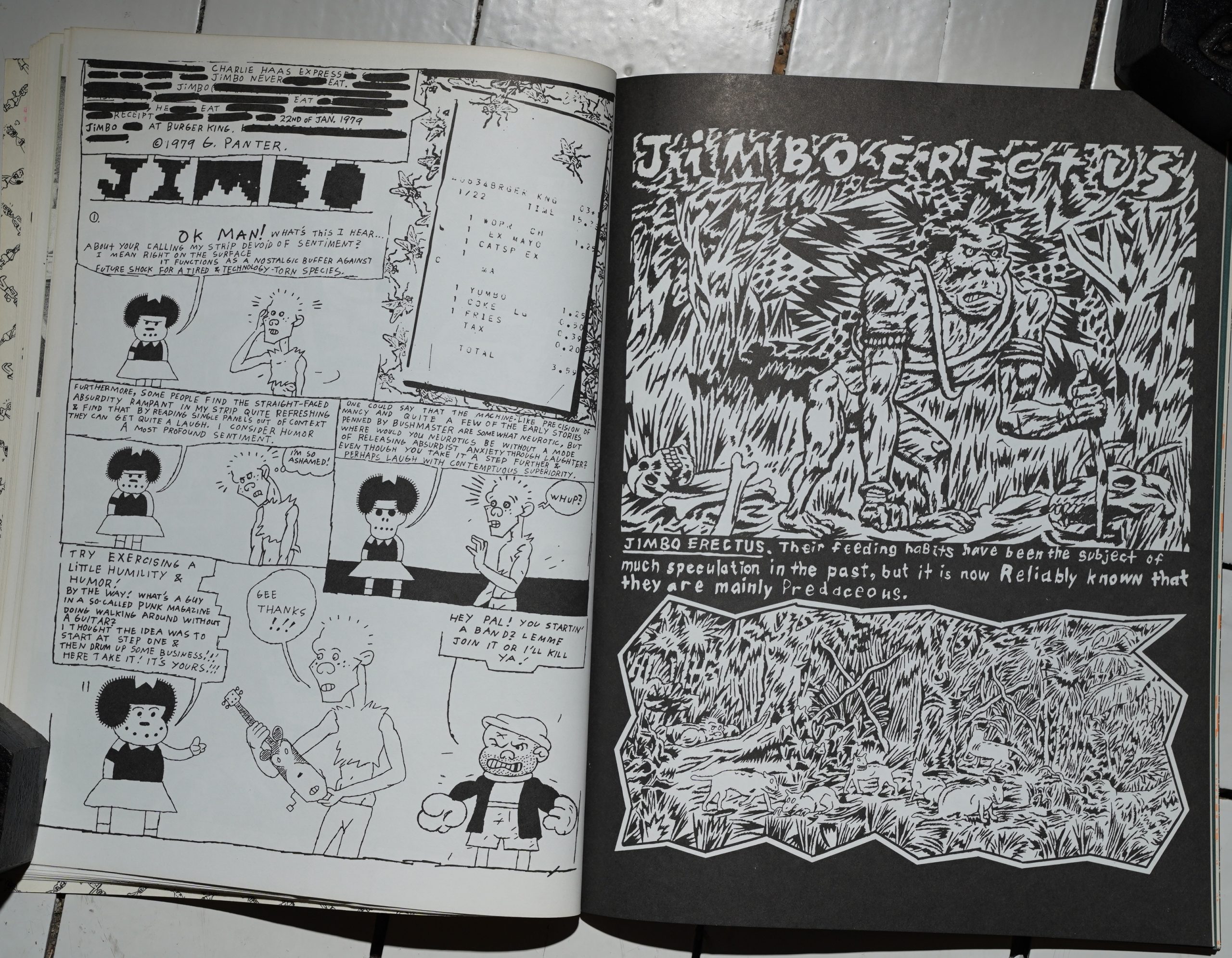 The Japanese edition also included some Jimbo pieces from Raw (like Jimbo Erectus), but not like here: In this edition, these stories are included in the middle of the Slash strips, and seem to be part of the storyline. Sort of. 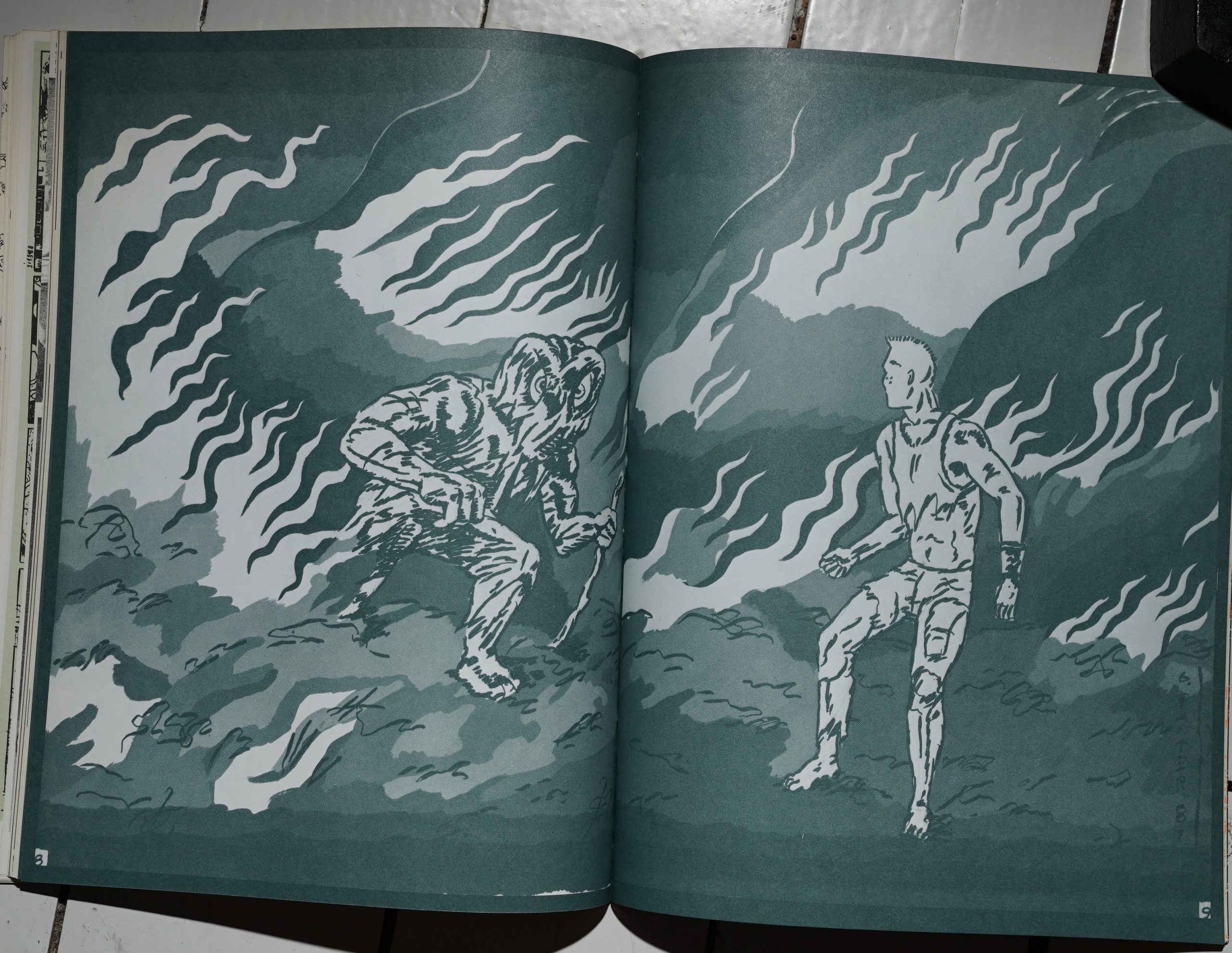 When we get to the end of the One-Shot pages, they switch the ink colour to green… 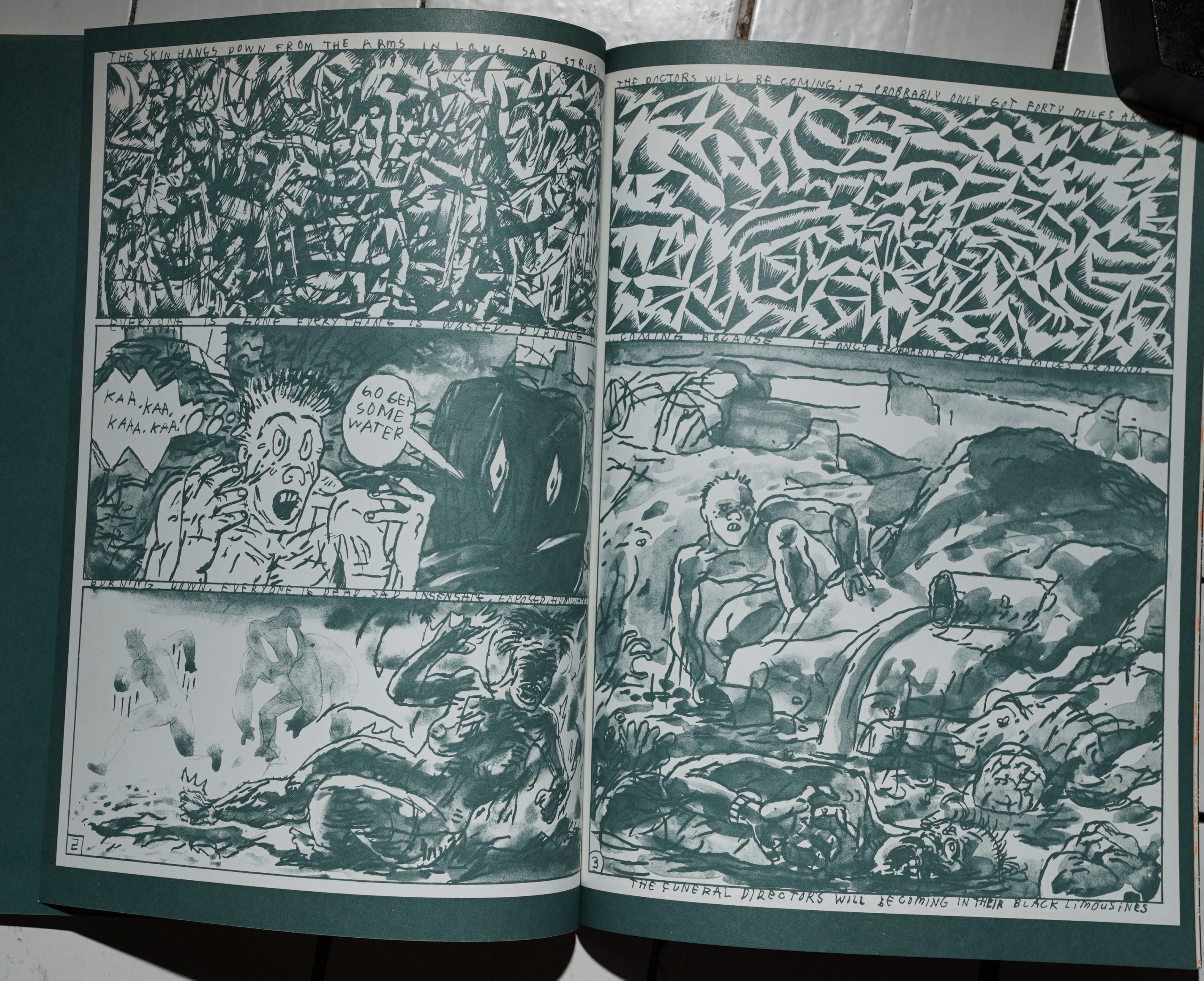 … which was how these pages, originally from Raw, were printed. These pages follow on right from where the One-Shot ended, so they feel very natural here (as opposed to the other stories that were inserted in the middle). 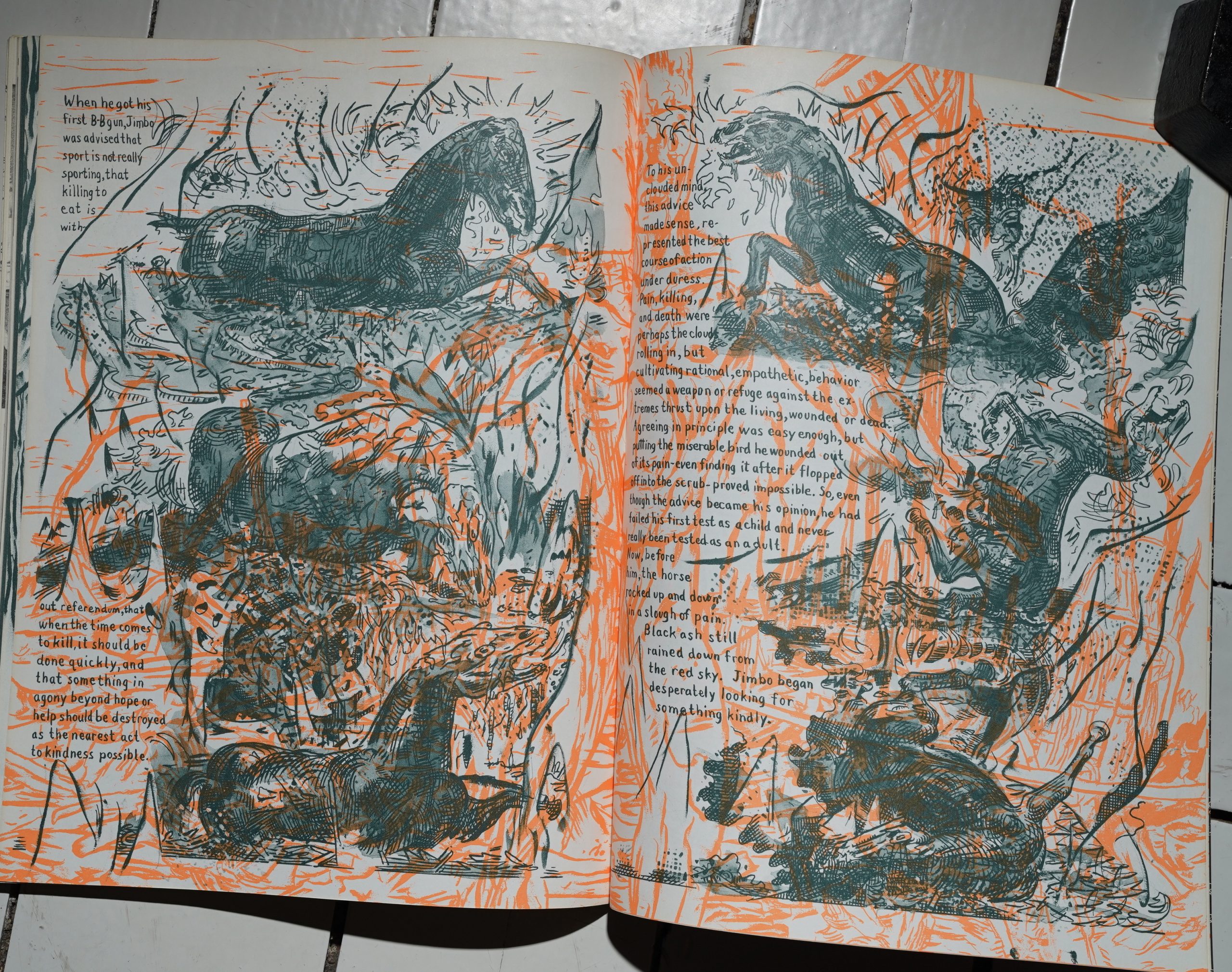 But it’s an odd book. The “prequel” additions don’t seem to add much of anything, and the Jimbo Erectus bit inserted in the middle made no sense, but the addition of the ending from Raw was perfect.

KELLY: Can you walk through the pro-
cession of getting involved With the Raw
crowd?
PANTER: My memory is faulty on-this I
started appearing in Slash magazine in
’77, I guess, the end of ’77, and if I’m not
mistaken, Art and Frangoise saw Jimbo,
or someone showed it to them, and they
approached me and asked me to con-
tribute to Raw, but there may be anoth-
er true story, but that’s the one I remem-
ber. And I think I was in by issue two or
three, I’m not really sure. Thads basically
how it went. I’m not sure if ld come in
contact with Charles Burns at that point.
I had seen his work through Matt
Groening, and Lynda Barry in the free
papers, and in self-published minicomics
and stuff like that. I was really excited
because I’d been doing this kind of work
since the early ’70s. I went to college in
about ’69 and started doing cartoons in
’71 and ’72. Jimbo actually dated from
about ’74, I think. And so it was really
ideal, and Art and Fransoise were great
and they were very dedicated editors and
very involved in putting out a good,
high-quality magazine, not just putting
anything in it.
KELLY: HOW much they push you to
stretch yourself
PANTER: They praised and encouraged
me to be myself. I was just ready to go. It
was more they have a real Art wants
things to cohere, so sometimes he would
help me make it make more sense. Like
when we did the Pantheon book, he
came up with a scheme to sequence all
the strips I had done. In my mind it was
just one big continuity, and all part of the
same thing, and I wasn’t really thinking
about the reader as much as what I was
trying to do in a scene. I always appreci-
ated that criticism. I really like
doing things over, but they never really
asked me to do things over. There was
just a lot more discussion and brain
power applied to the whole enterprise.
KELLY: Those are the strips that were includ-
ed in the mprint book that came out later?
PANTER: The Raw one-shot at first
and then the Pantheon book, and there
was also a collection of Jimbo right
before the Pantheon book. I unas
already interested in doing ambi-
tiously weird, experimental
comics, and even moreso after I
was contacted by Bruno Richard,
and Bruno played some role. Art
may have shown my work to
Bruno, or Bruno became aware of
it. Bruno took this world tour, in
I’m not sure what year, ’78 or ’79,
just visiting all the weird artists
and underground cartoonists that
he could find and really put a lot
of people together. And his work
with Pascal Doury and (Marc)
Caro, in the publication Sont
de Sortie, “The Girls Have Gone”
— it was really inspiring because it
was two or three guys working on
one piece of art, so they would
make it really dense, where I upas
dense to a certain level, they were
really going far beyond that, in
terms of density. It challenged me
to make my stuff denser, and I did,
visually.
KELLY: Were those pieces chat
appeared in Raw your first extended
narrative? The longer pieces that you
did?
PANTER: Well, I was working on
an extended narrative in Slash, but it was
just one page a month.