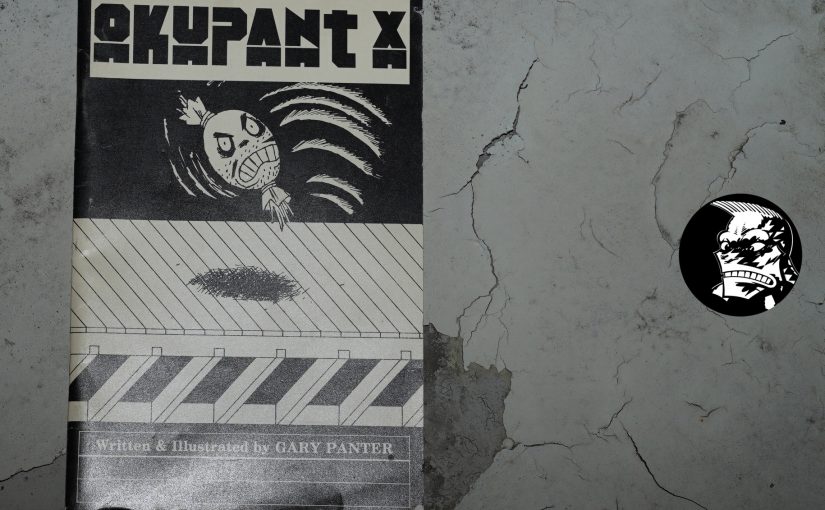 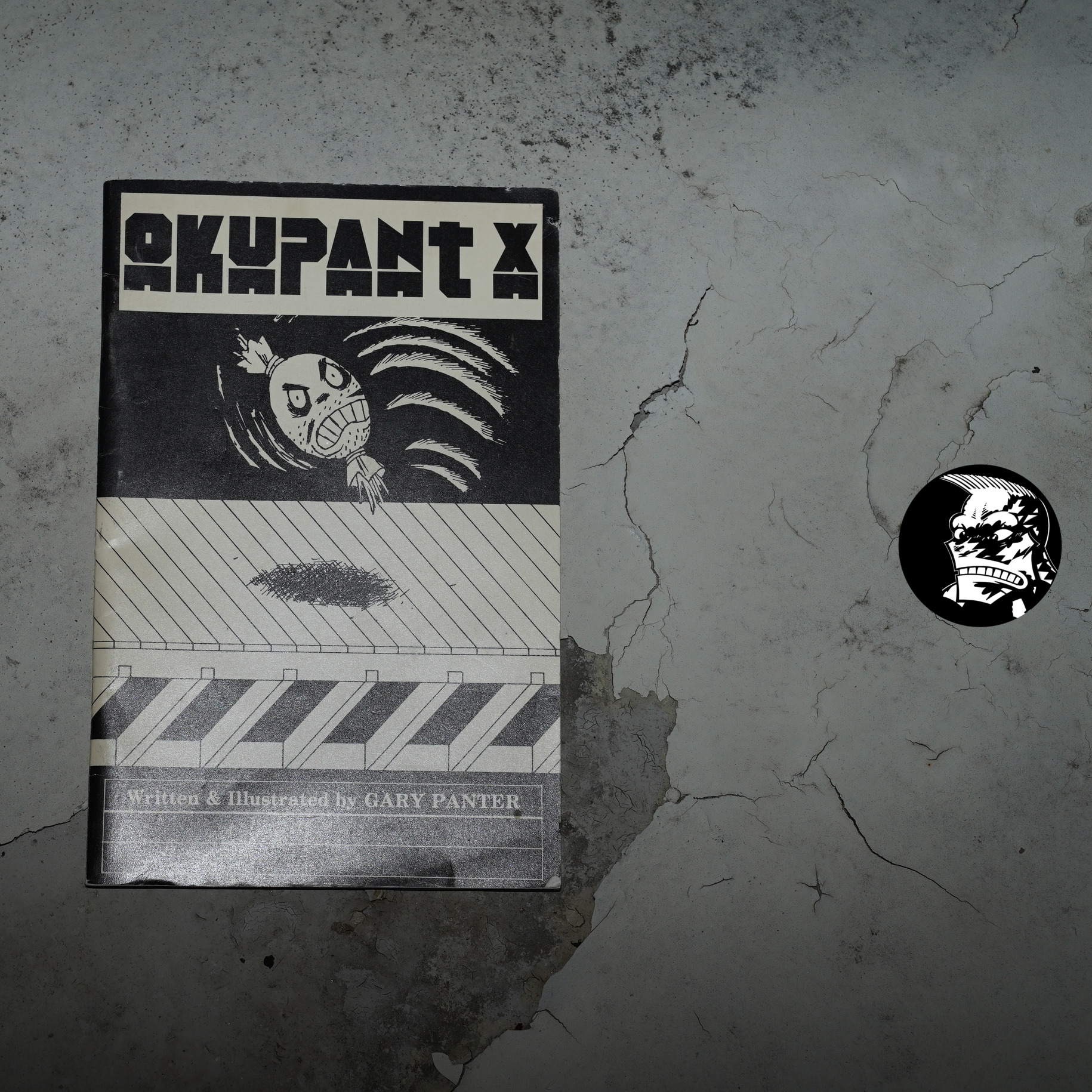 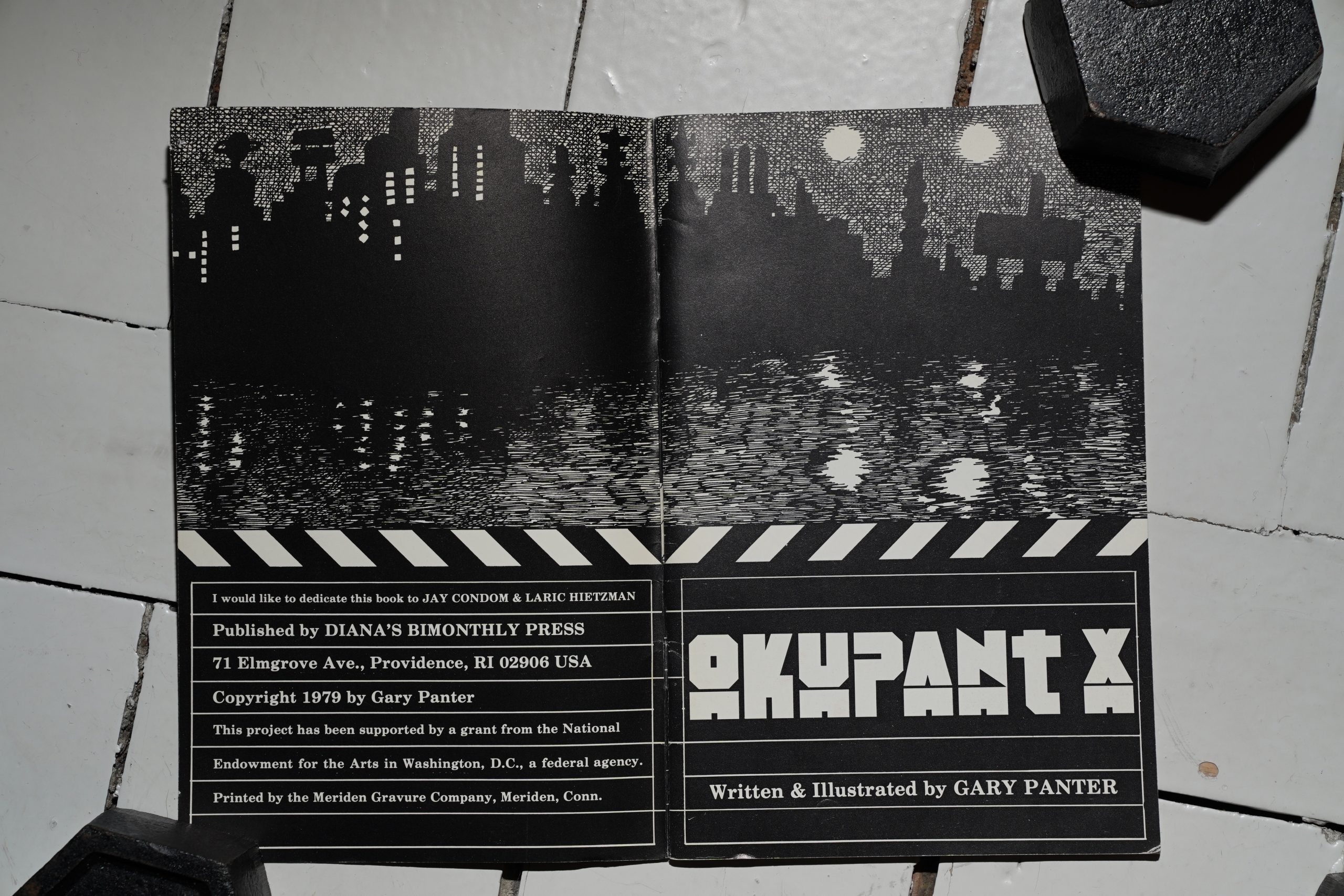 This is a most curious book. It was published in 1979 by Diana’s Bimonthly Press, with a grant from the National Endowment of the Arts. It’s offset-printed (I think; very shiny ink) and stapled. I tried googling the publisher, and I’m finding things like: 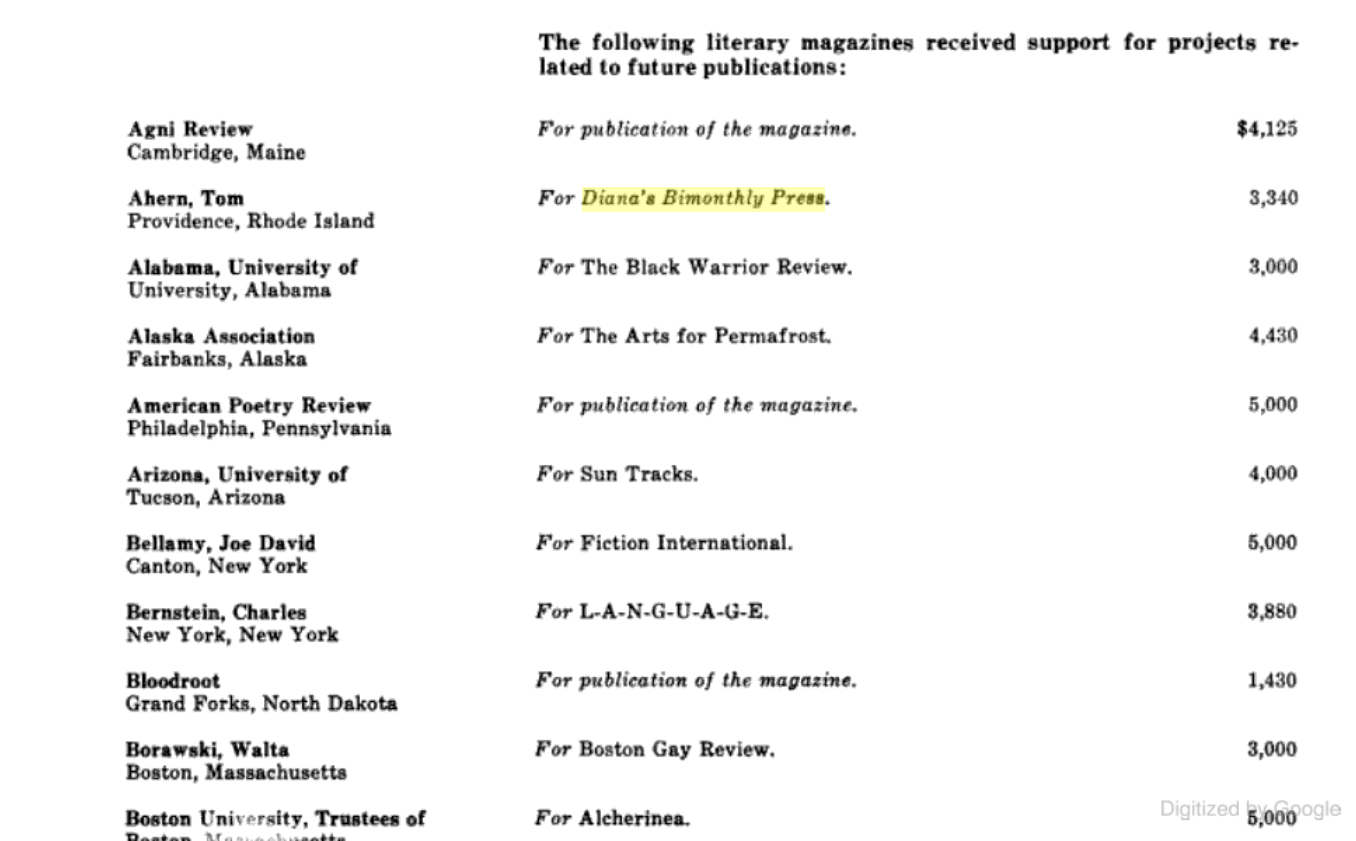 But nothing that says what the press actually was… 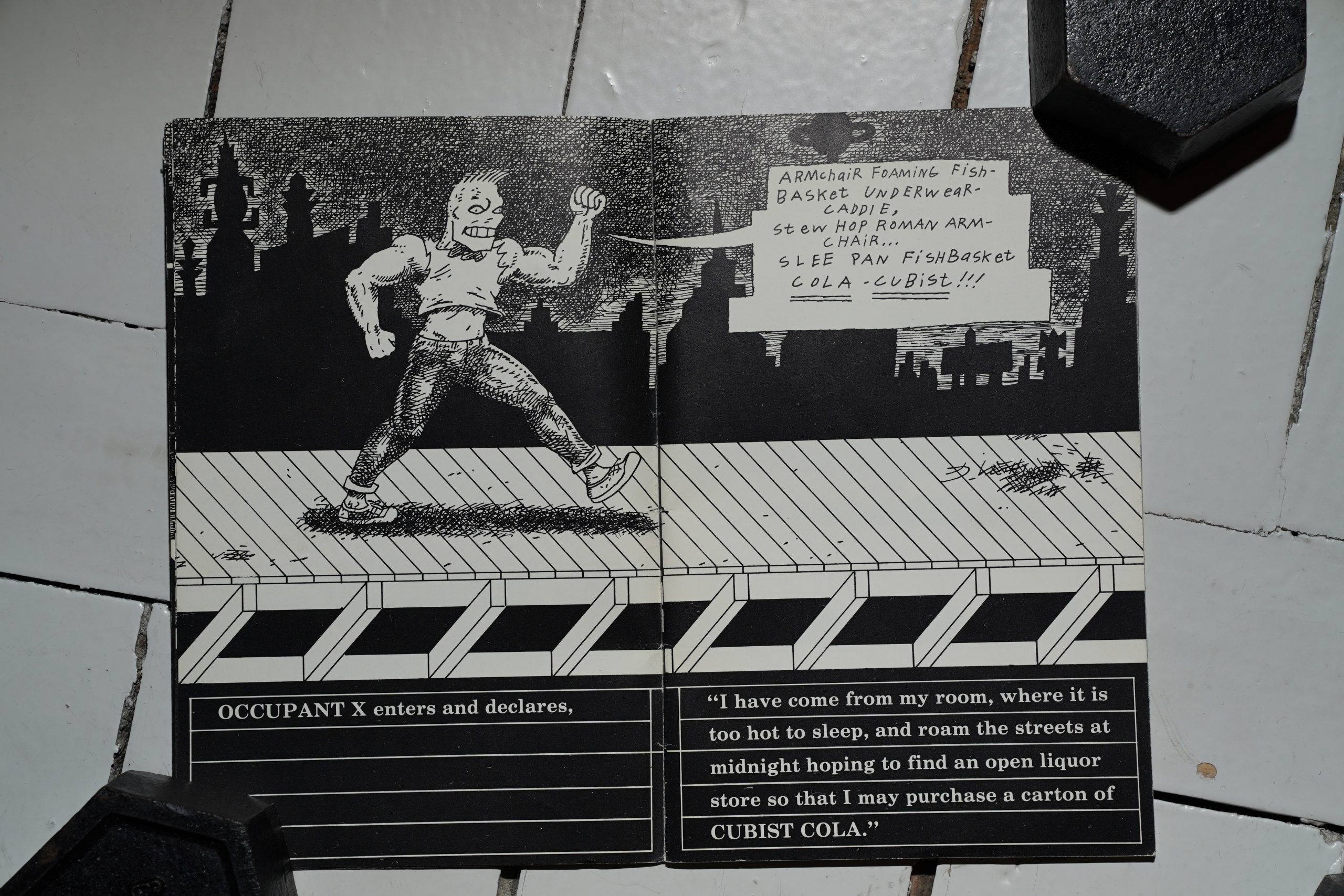 Anyway, the book is about Jimbo playing Occupant X in a play in Dal-Tokyo, and that’s the first of many references here to other works by Panter elsewhere. Dal-Tokyo was a strip Panter published in the LA Reader starting in 1983, so this is before that. 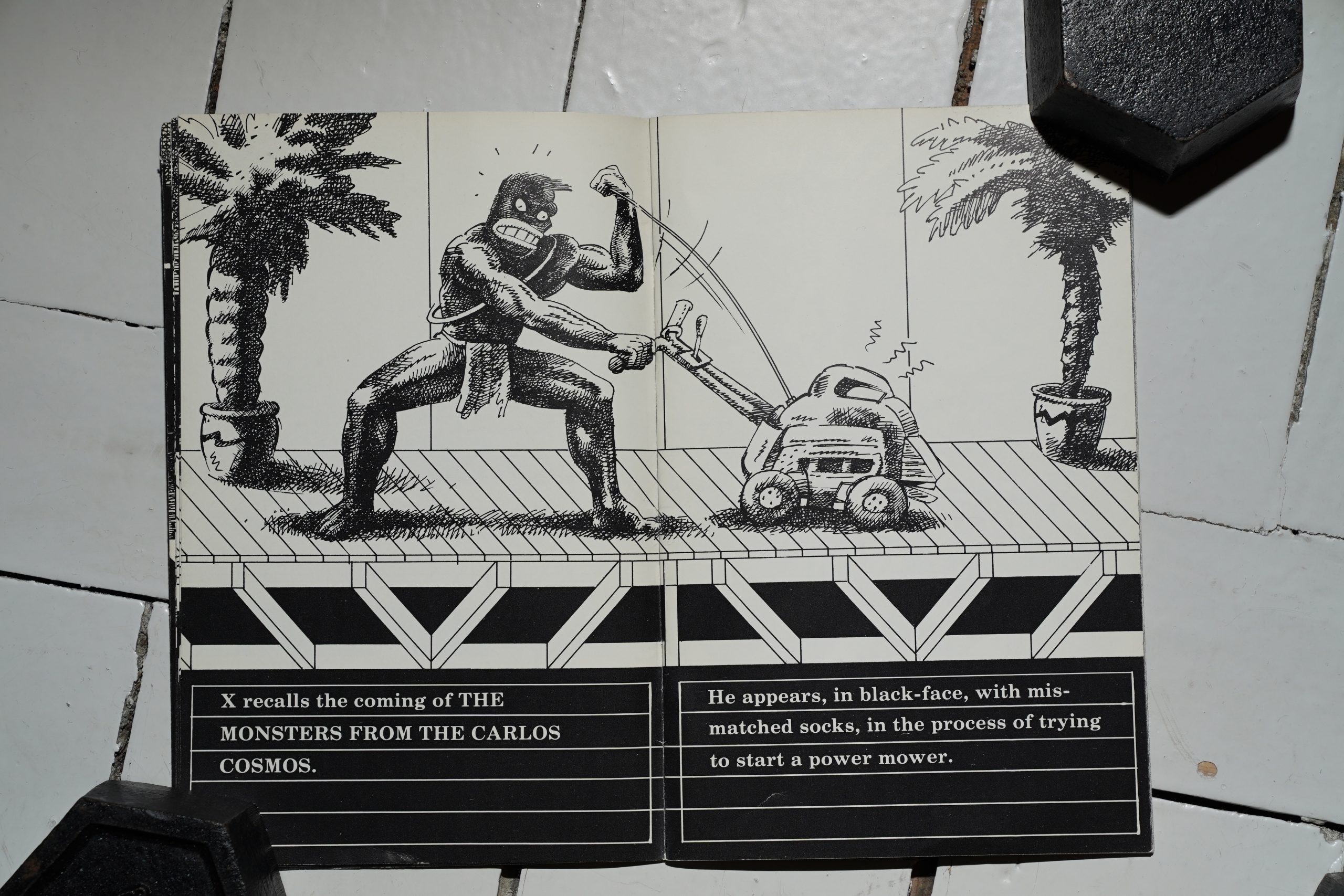 The Jimbo-on-stage/text-below thing gives this a children’s book vibe, sort of. 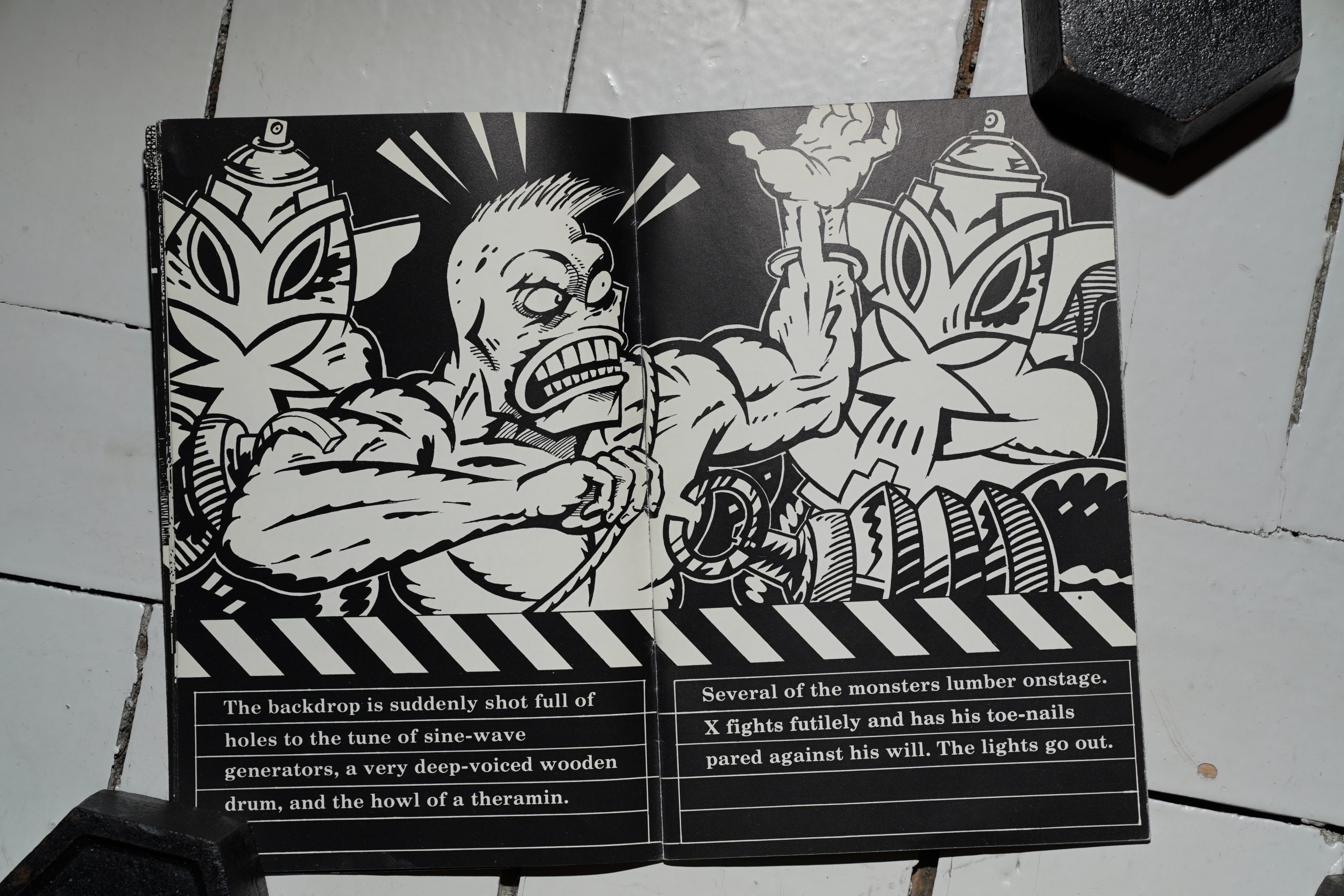 Panter experiments with different rendering techniques, and on this spread, he’s doing an almost super-hero inking job with Jimbo’s hair. 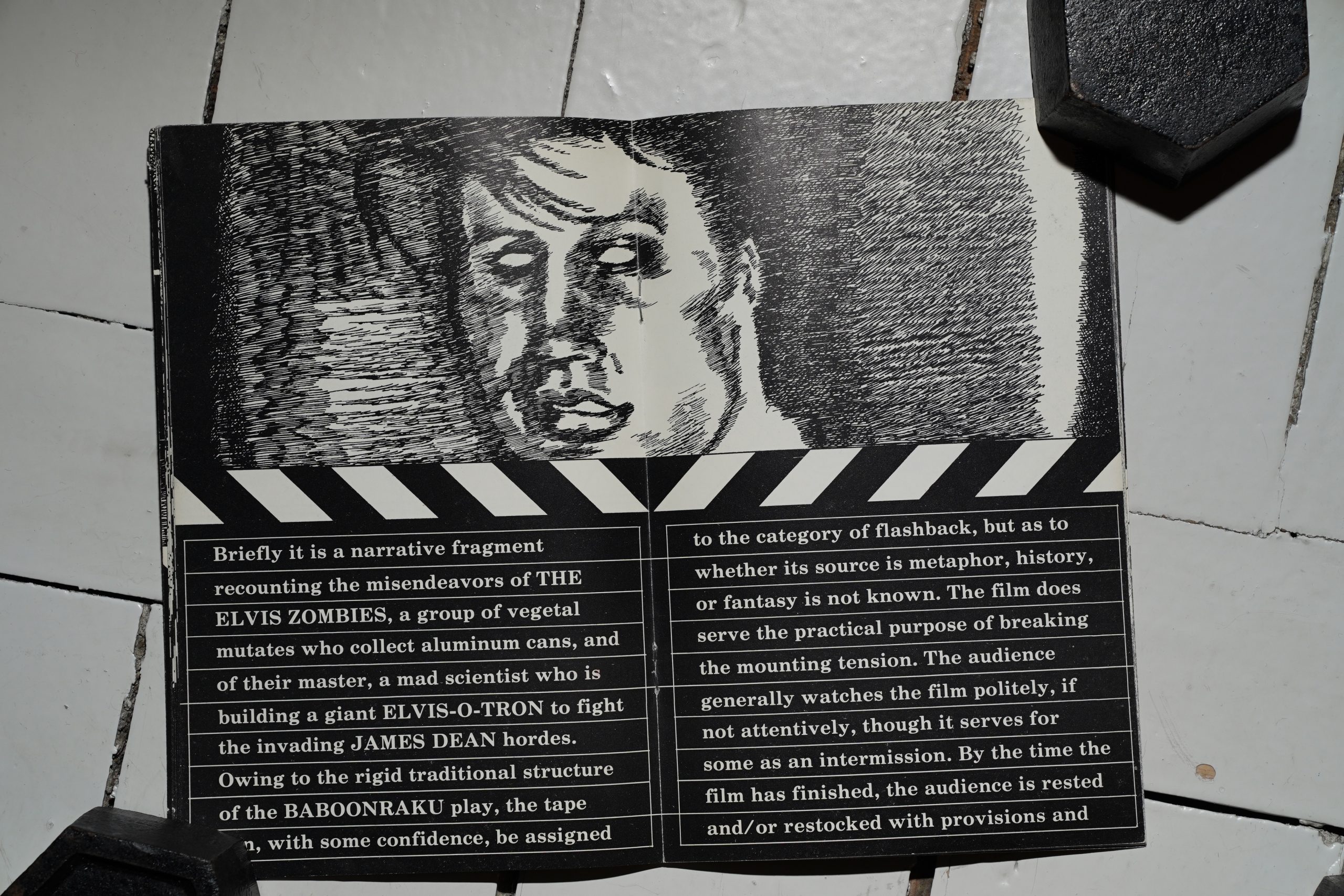 We touch upon Invasion of the Elvis Zombies, published in 1984. 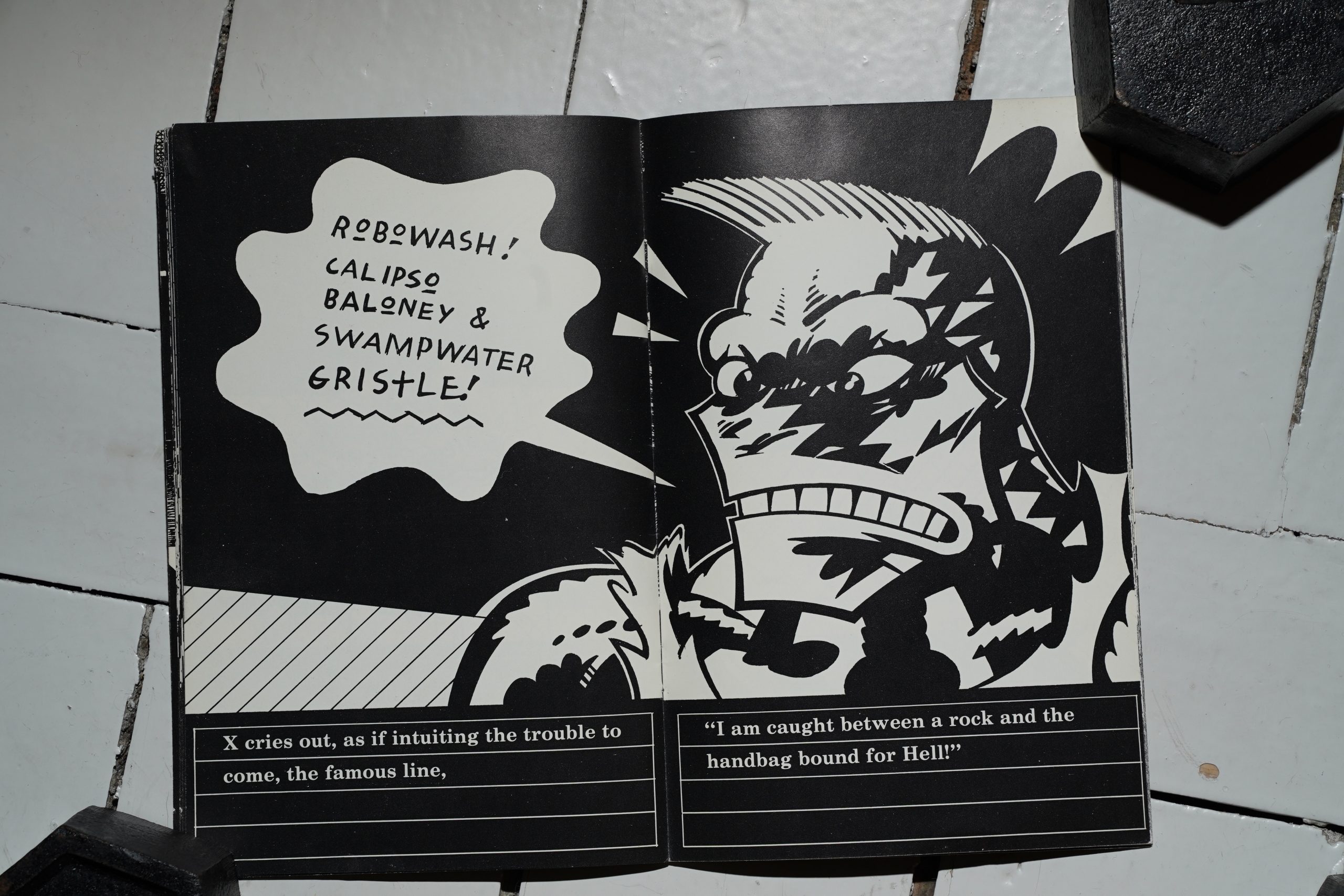 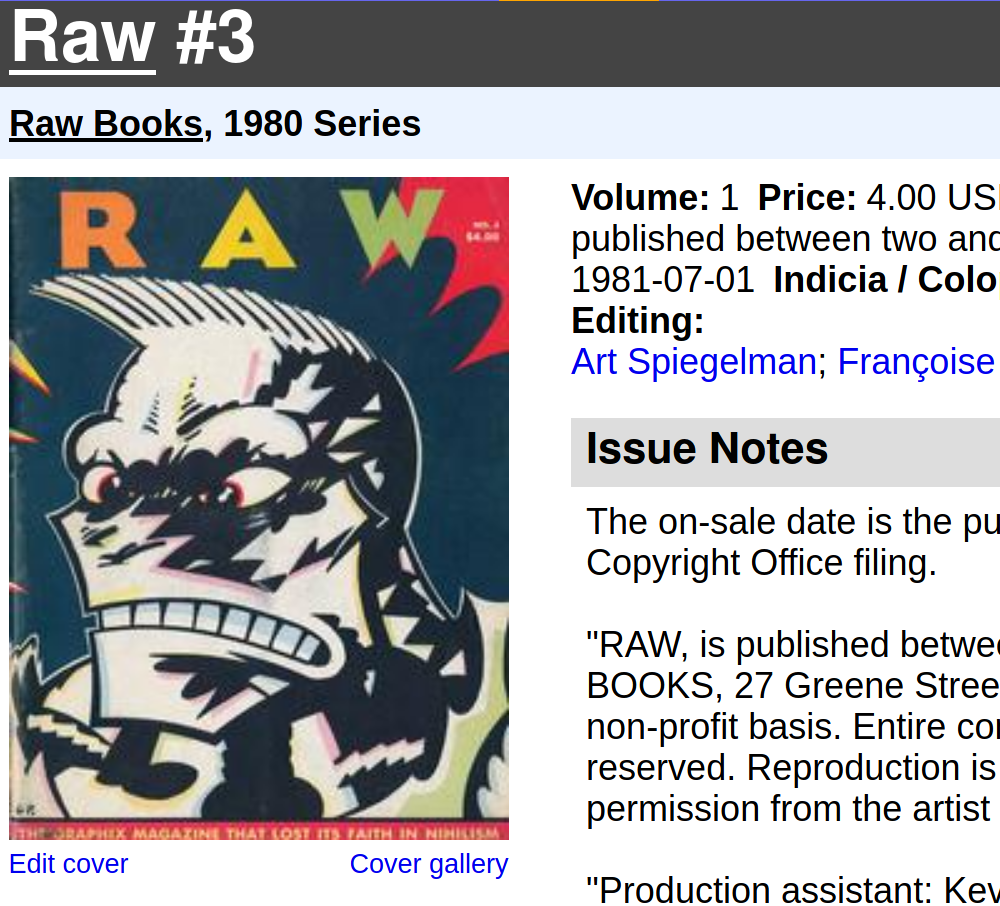 If Okupant X had been published later, then you’d think of it being very referential, but instead it seems like Panter would cannibalise ideas from it over the next few years? Or perhaps Dal Tokoy/Elvis were things that he had already started working on, and just included here, too?

LUCIANO: Tell me about Okupant X. 1
haven’t been able to locate a copy, but people
tell me it’s an important book.
PANTER: Yeah .
LUCIANO: Uhh, what is
PANTER: Okupant X is a book did in
. .uhhhhh… [Gets up, starts rummaging
around in search of a copy] Lemme see if I can
find a copy here.. .Oh yeah, I told you I
had a Xerox of that, and I do. [Thumbing
through the book) I can’t remember what
year. . ’79, ‘SO, something like that .
published on really good paper by an art
publisher in Rhode Island, from Diana’s Bi-
monthly Press.
LUCIANO: Gary, what it??
PANTER; It’s a 28-page book about this
guy, OkupantX. It’s kind ofa puppet play.
It’s just about this guy who goes for a walk
and happens onto this corporate property
where this giant monster attacks him.
LUCIANO: A giant monster, did you say?
PANTER: Yeah, a large germ. It was an
excuse to draw a ’50s monster with lots of
eyes and arms and stuff, and write some-
thing sort of Kabuki-like.
LUCIANO: That occurred to me, at least on
a subliminal level. At one point, looking at
“Jimbo,” I thought, “This is like Kabuki
Drama.’ .
PANTER: Yeah, it is Kabuki-influenced
in a way. I’ve really studied and looked at
Japan to see what their view of the West
was, to see another view of things.
LUCIANO: Tell me more about. working in
this child-like style.
PANTER: Well, it’s just following tradi-
tions. I don’t think of my stuff as looking
like children’s drawing, really. In some
ways, I’m just working to”fill in a gap. If I see
everyone doing slick, air-brush, beautiful,
really • ‘finessed” drawings, then try to do
something that’s not being done as much.
That’s where my work comes from. But
now, lotsof people are drawing ratty.
LUCIANO: (Laughs) Drawing ratty? That’s •
What call it?
PANTER: Yeah, ratty. That’s pretty
much what I call it. Ratty drawing.
LUCIANO: But you like ratty drawing, cor-
rect ?
PANTER: Oh yeah, it comes right out of
the human being. Ratty drawing is natural,
like the marks people make on crates when
they write the numbers on them to ship
them off, or like bathroom graffiti when it’s
just scrawled onto the walls. The line has
some kind of content. It’s got the emotion
of the person doing it. It’s a testament that
the person exists and that they made the
marks.

LUCIANO: You use the word “marks, i’
where hear most cartoonists or artists talk
about “lines. What’s the difference?
PANTER: (Long pause during which he con-
siders the question) I think lines are the kinds
of things an artist uses to construct an illu-
sion. A line is a tool for making or defining
an illusion. A mark is more ofa thing that
exists for and by itself. It’s more abstract as
a building block. I think the idea of
“marks” is •somehow closer to the natural.
Marks get away from the sophisticated
reality of an illusion of depth toward the
reality of something that’s closer to the
natural order of things. Yeah, marks have
the look of nature.

It was apparently also published in a different format: