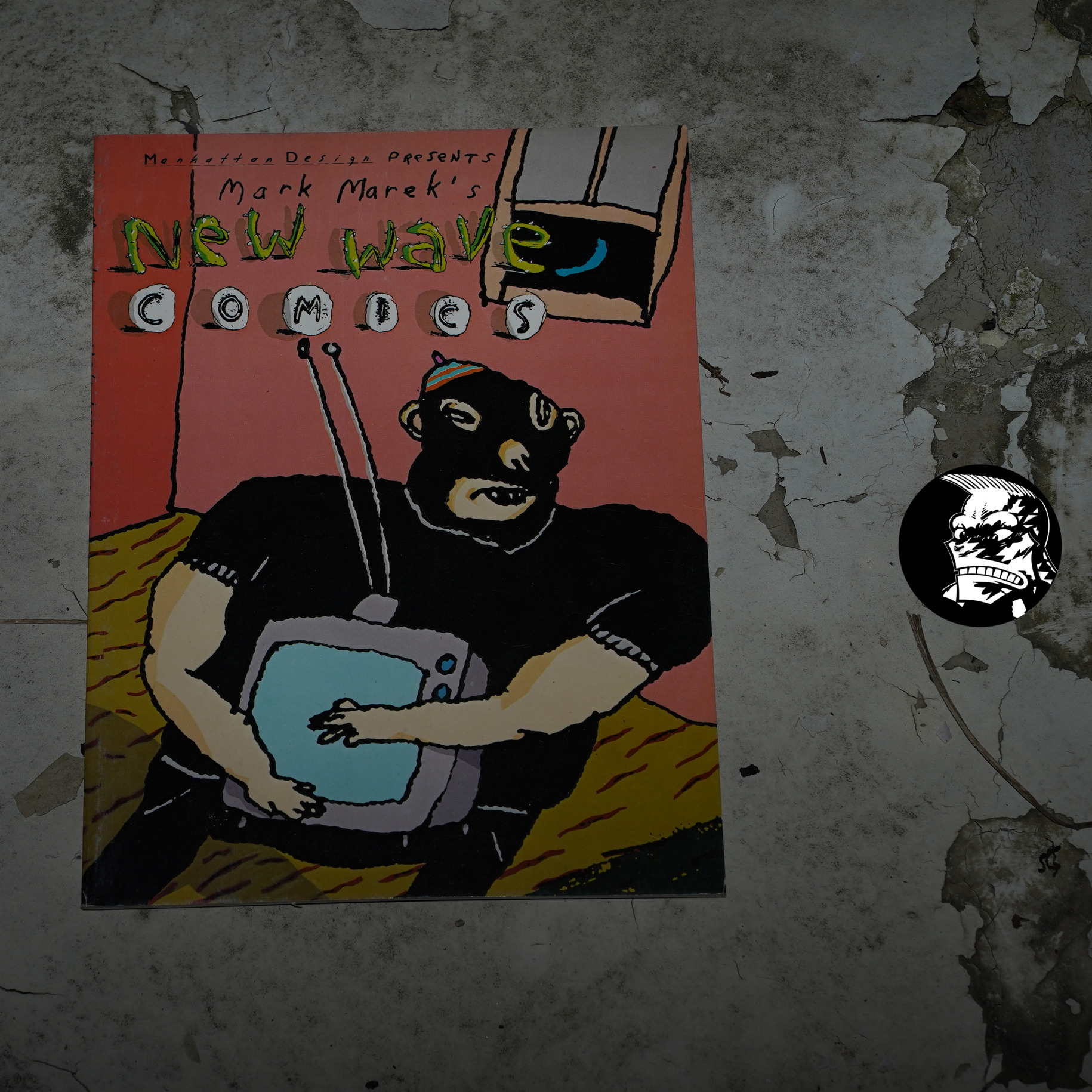 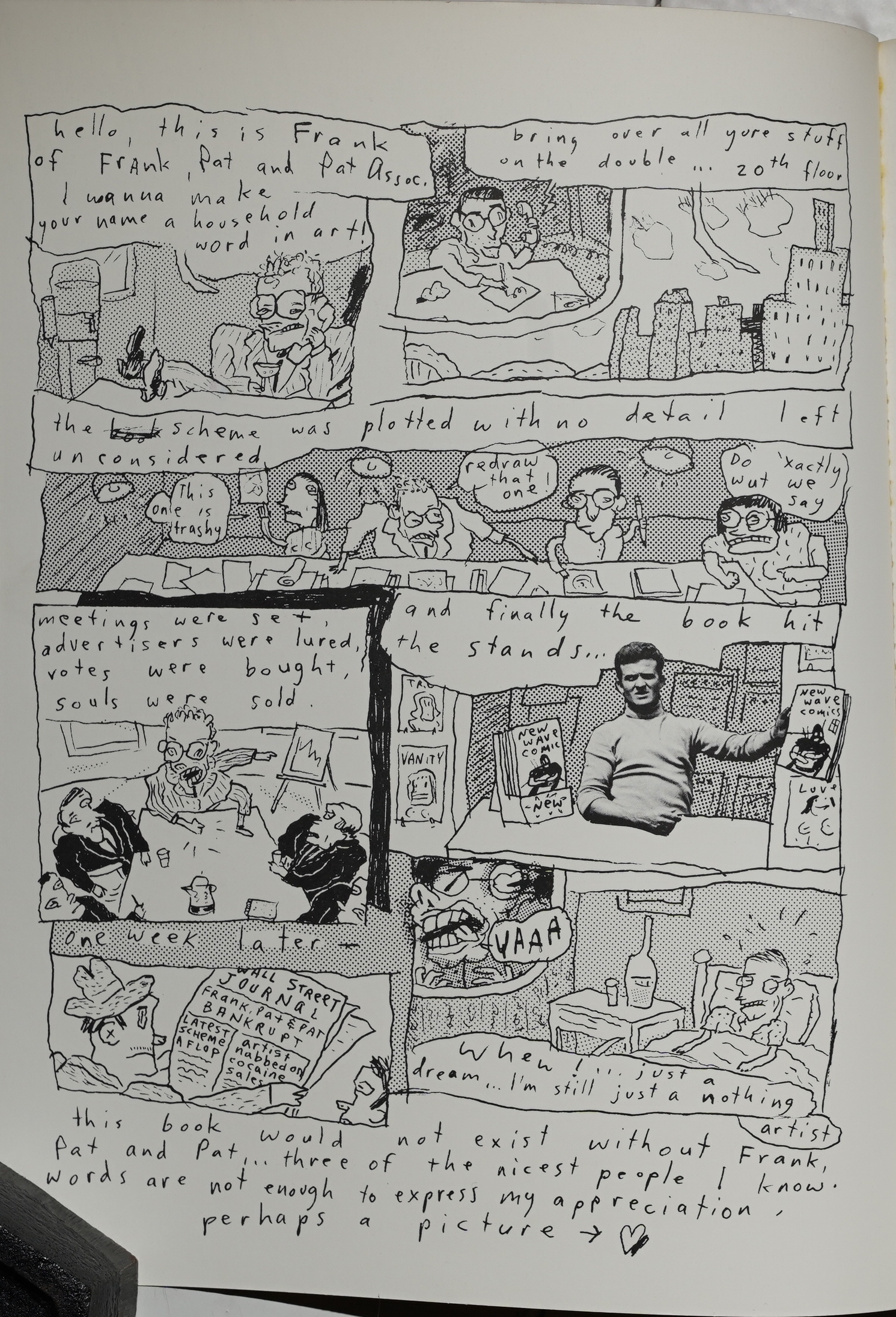 Mark Marek explains how this book came to be published.

It’s striking how few of the books I’m covering in this blog series are published by… well… publishers. The alternative comic book market wasn’t huge at the time, but publishers like Fantagraphics did exist, and book publishers had departments for art books… but instead most of these books are self-published, or published by art schools, or, as here… by a design studio. 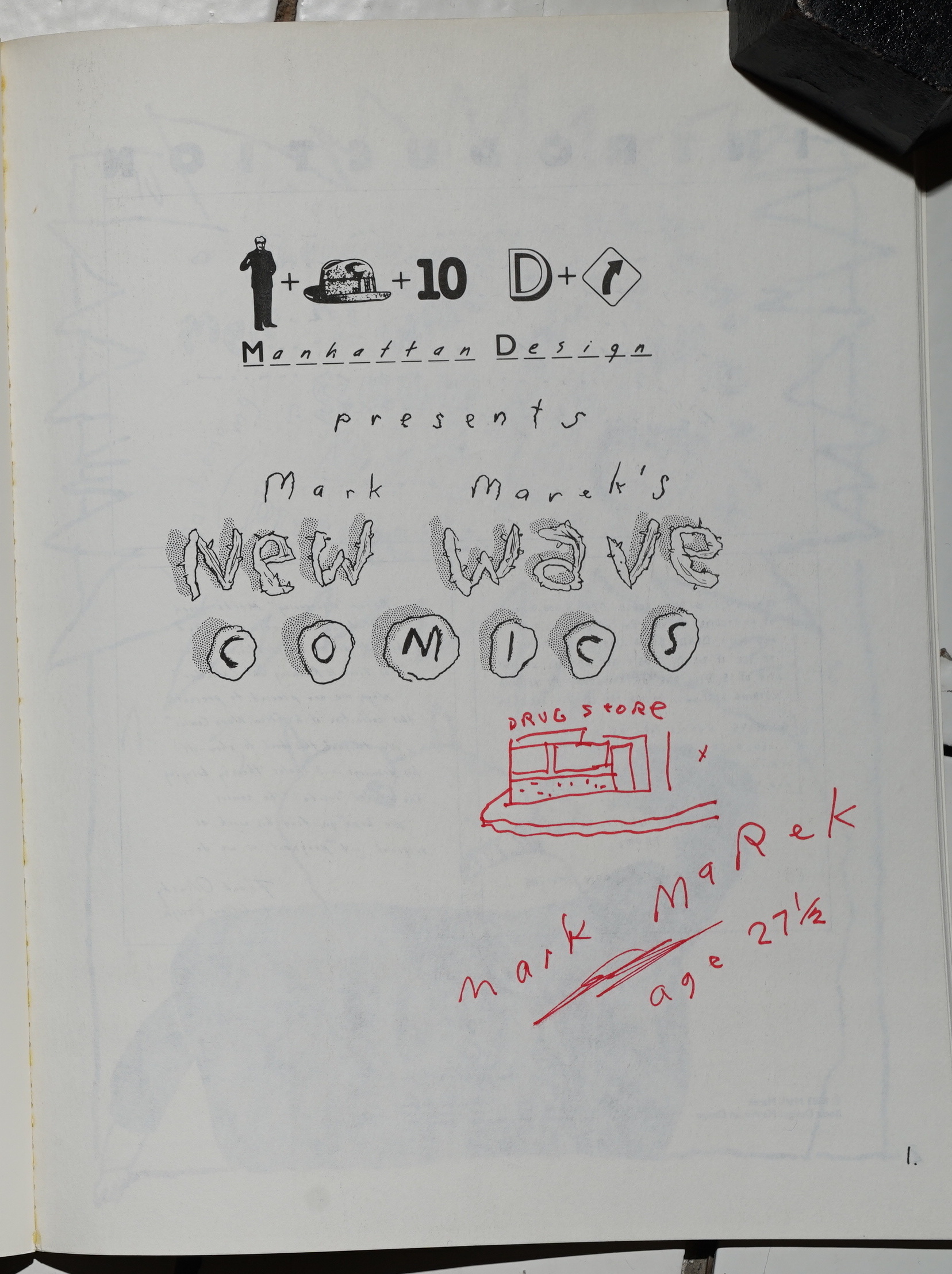 This is published by Manhattan Design, which (contrary to the official-sounding name) was a tiny studio… but they had designed the MTV logo, as well as a bunch of other things for MTV and various “hip” musicians, so they were presumably flush with money and could publish this book.

I’ve never seen a copy of this book for sale that wasn’t signed, so I’m guessing Marek signed the entire print run: 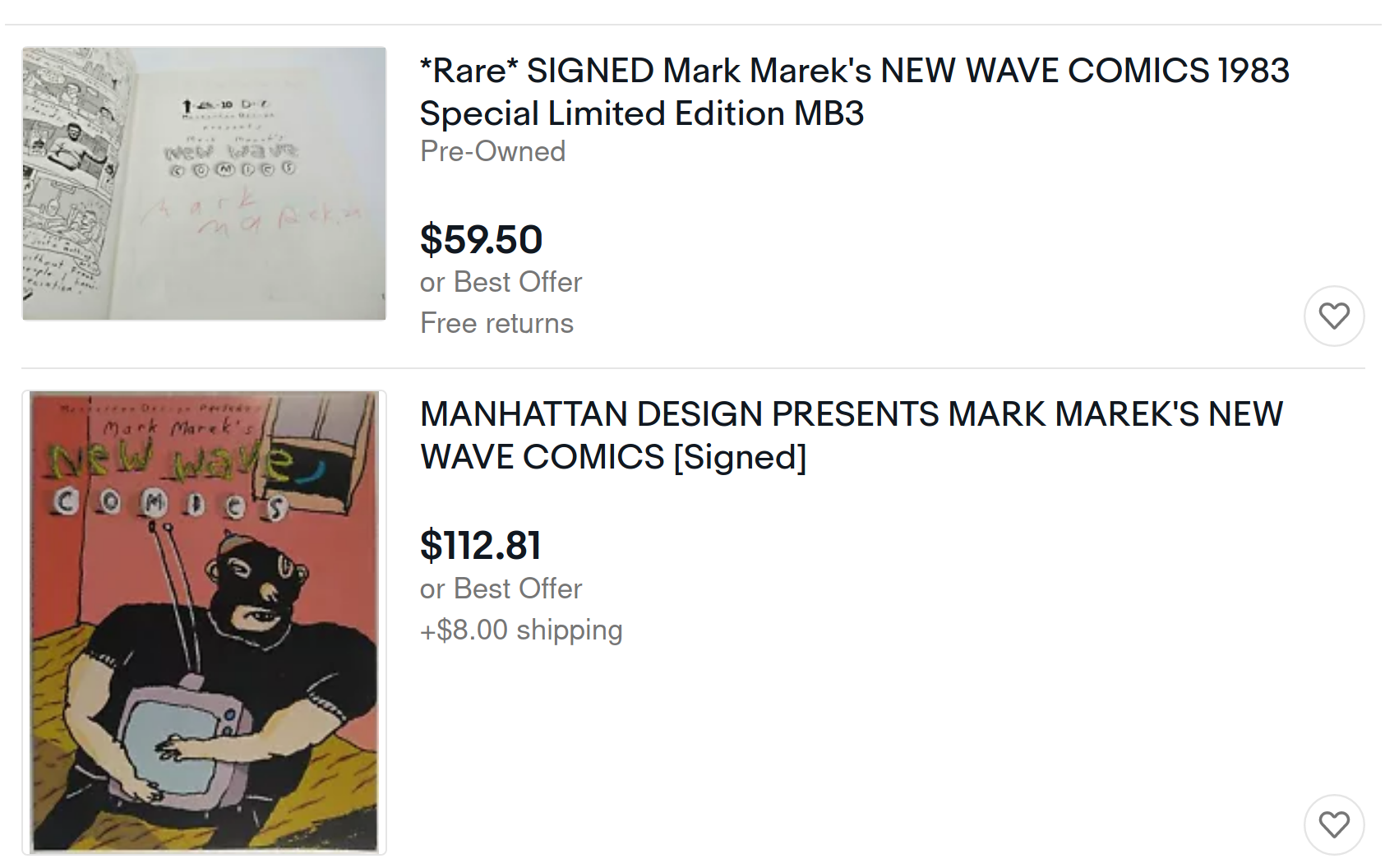 (And an aside here — I’m sure glad I bought so many of these books at the time (or just a few years after), because they’re really all kinda expensive now. I guess I’m not the only one that obsesses about these comics…) 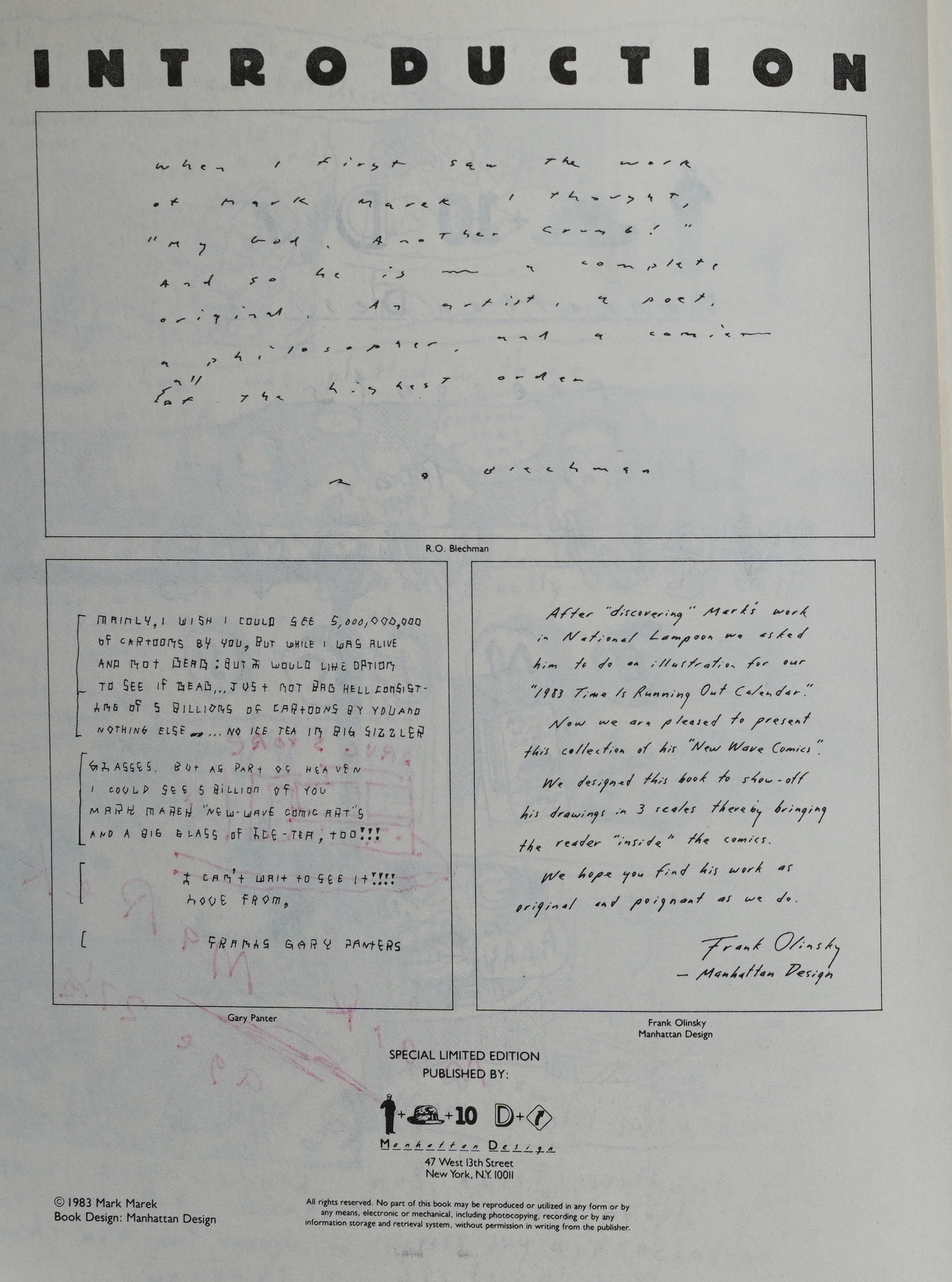 We get not one introduction, but three — from R O Blechman, Gary Panter and Frank Olinsky (from Manhattan Design). 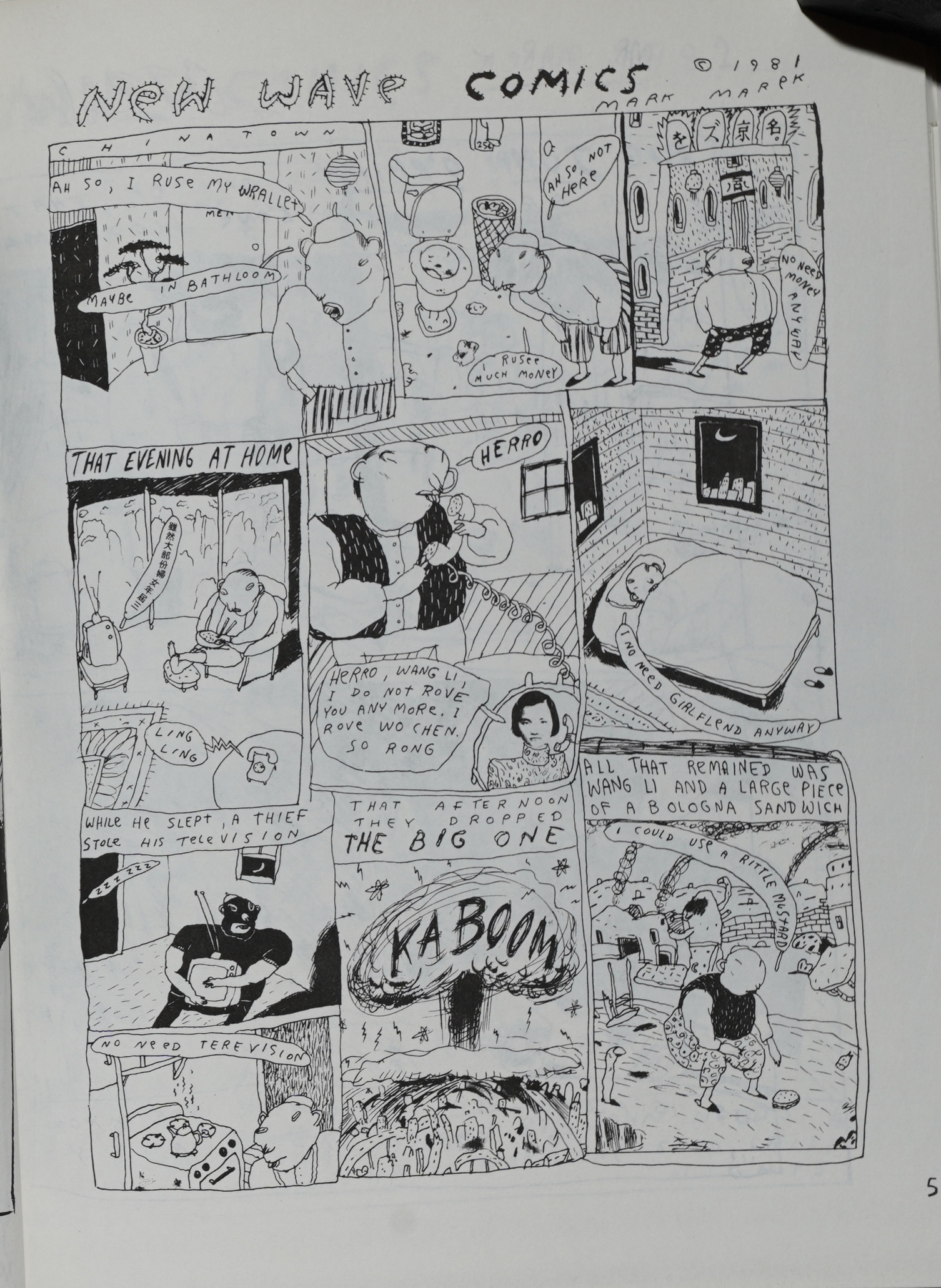 I’m not sure whether this book reprints strips that had run in National Lampoon? I’ve been googling, but apparently only the Hercules strip ran there?

Those of us who read National Lampoon and High Times in c. 1985 will remember coming across Marek’s “New Wave” (scratchy, demented) Hercules comic — “the strangest, bravest comic on earth” — there.

These comics seem to have been created from 1979-1983, but whether it’s a reprint or not is unclear. But these are mostly gag strip, and the first one is… kinda… hackneyed? The main schtick here has been done to death. 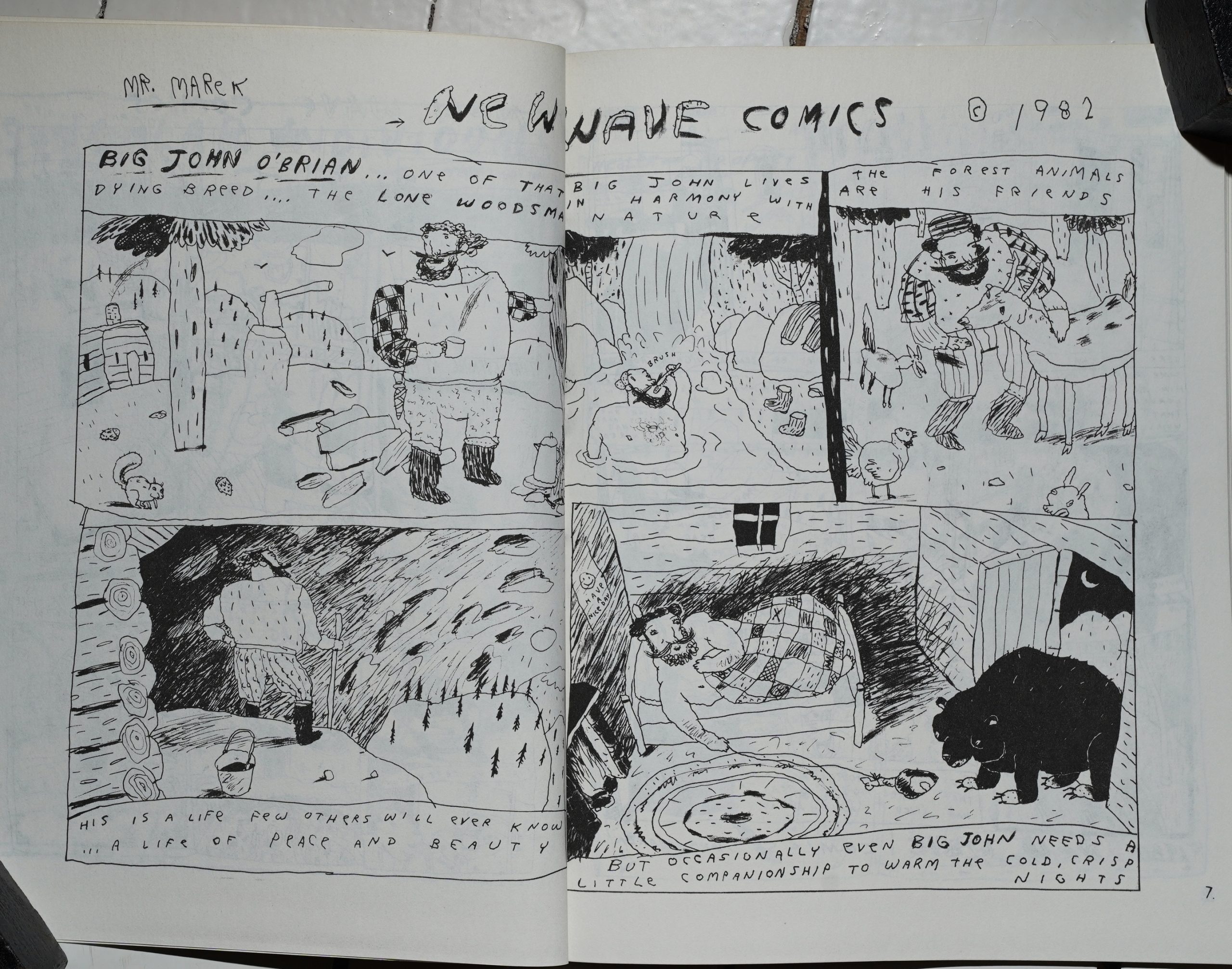 But then things pick up and we get more genuinely oddball humour. 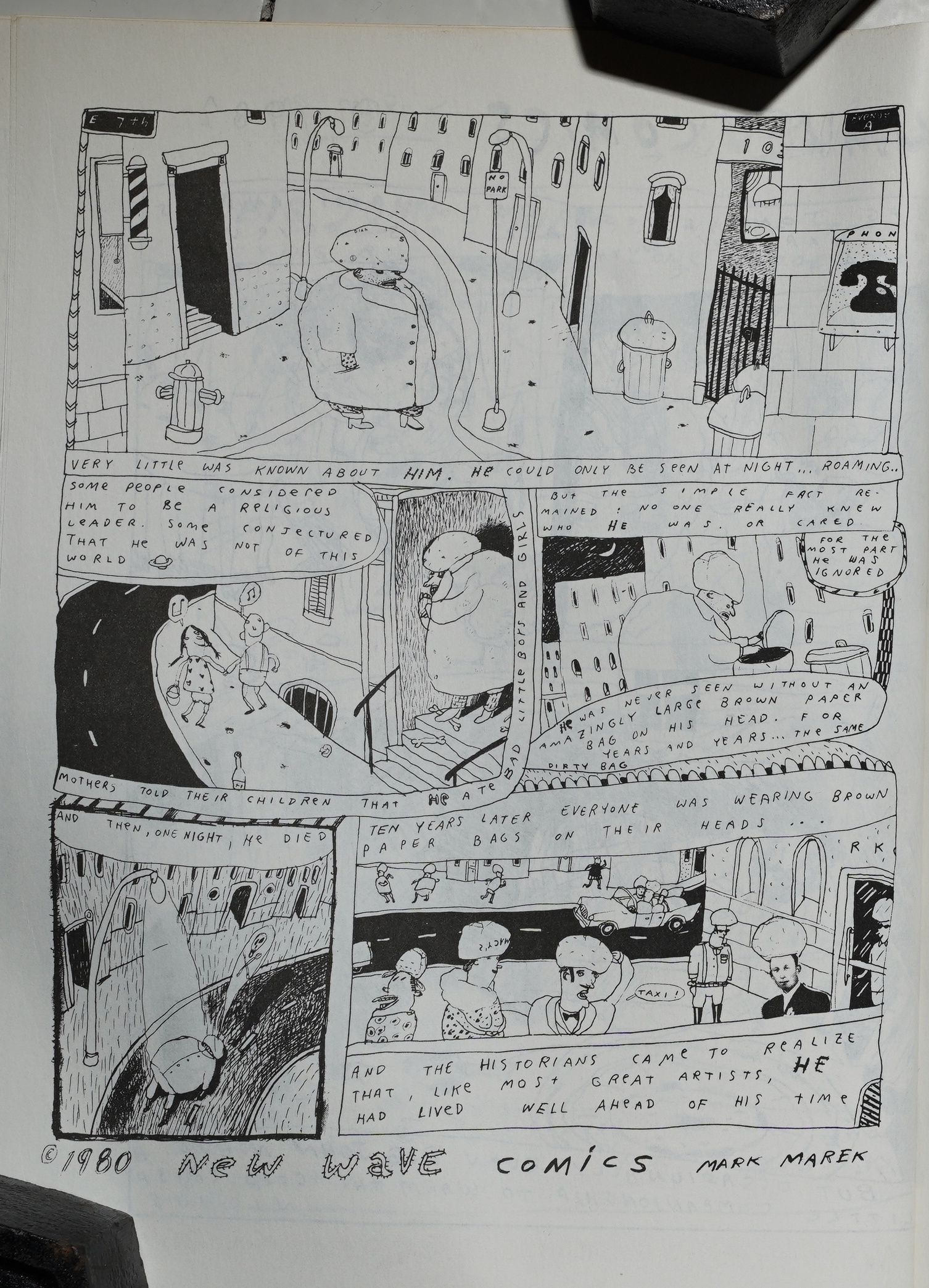 I love the way Marek will have the text circle up the panel when the text gets too long. It’s what every child does when making comics. 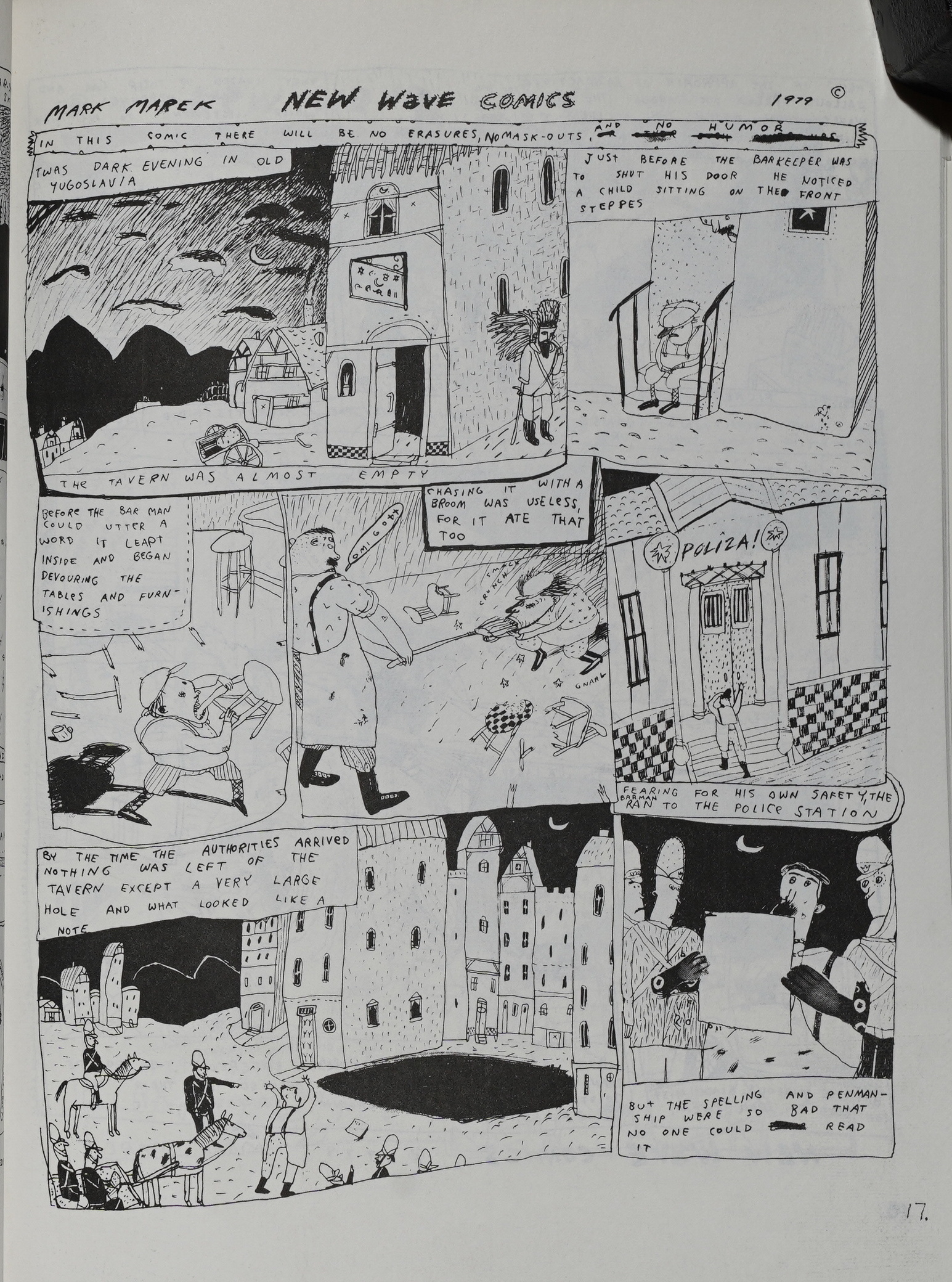 In this strip, Marek says “no erasures, no mask-outs” (and then a gag follows), but I wonder whether that’s his general mode? Being spontaneous and not making corrections? Very method. 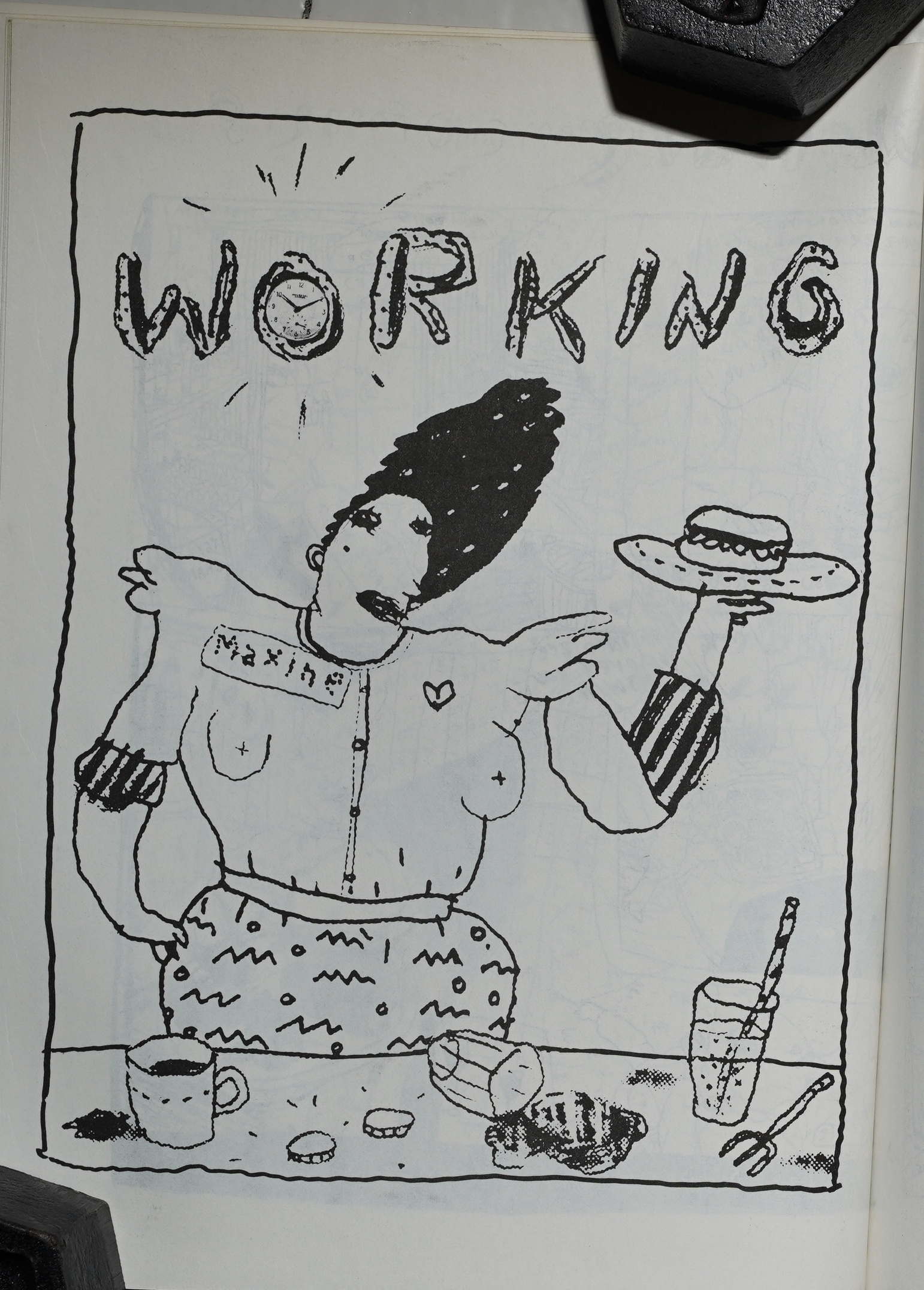 The book is organised into thematic sections, with a separate page introducing the topic featuring a much enlarged image from one of the following strips. These are to enlarged that you can see every wobble in Marek’s marks. 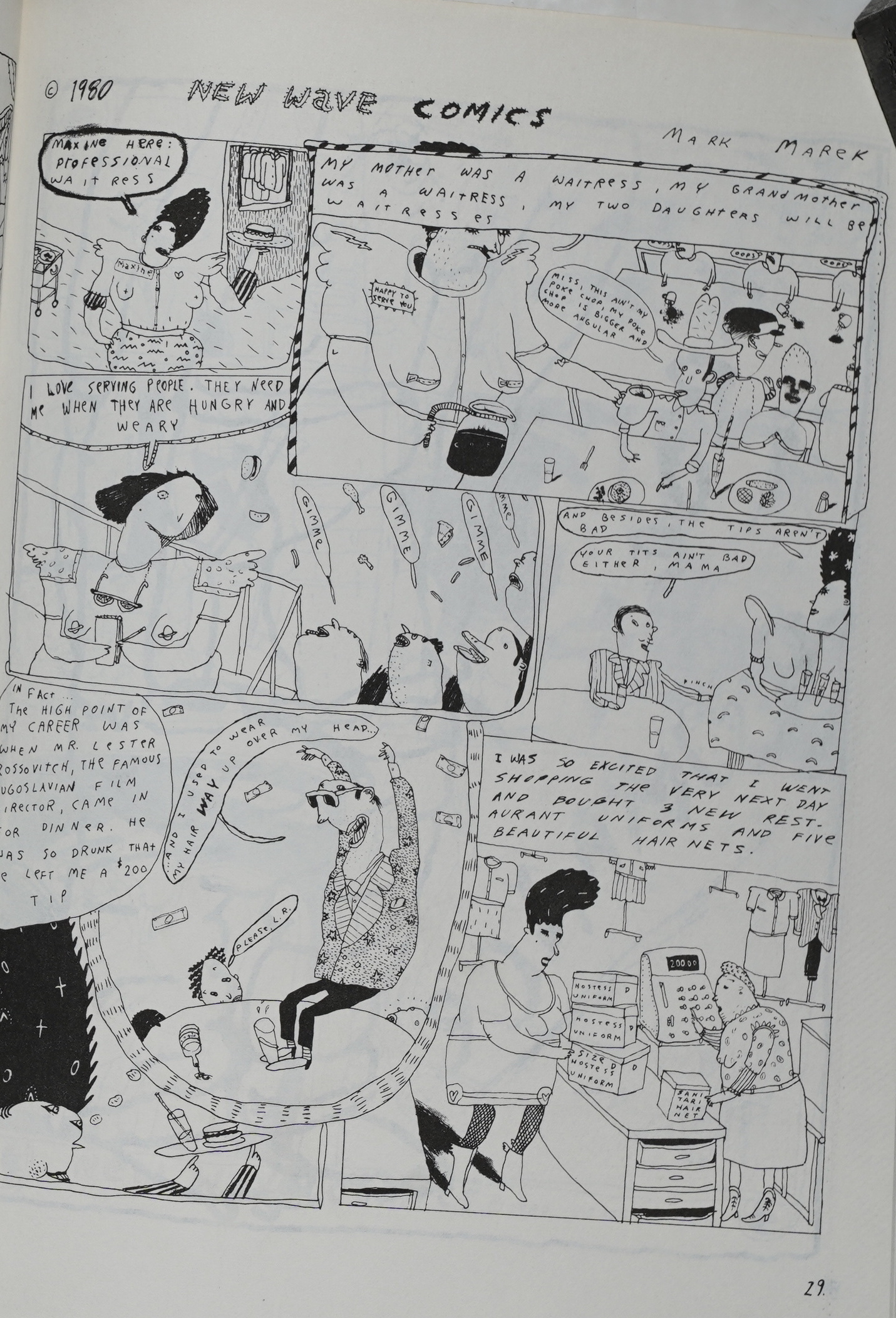 (Original image in the first panel on this page.) 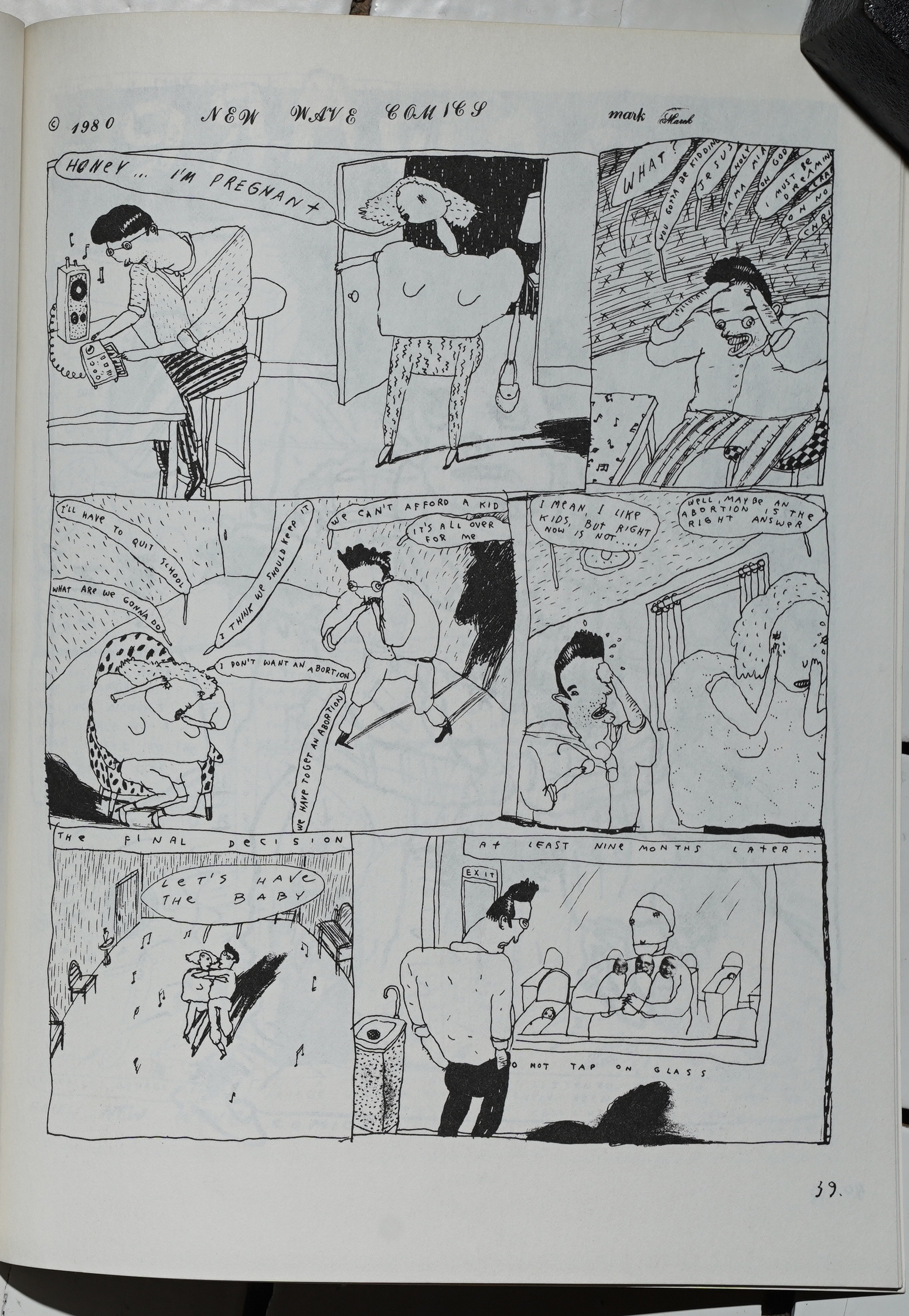 The artwork has a ratty line, but it’s quite accomplished, really: Look at the drama in the second panel, and the swirling confusion and despair in the third. It’s great! 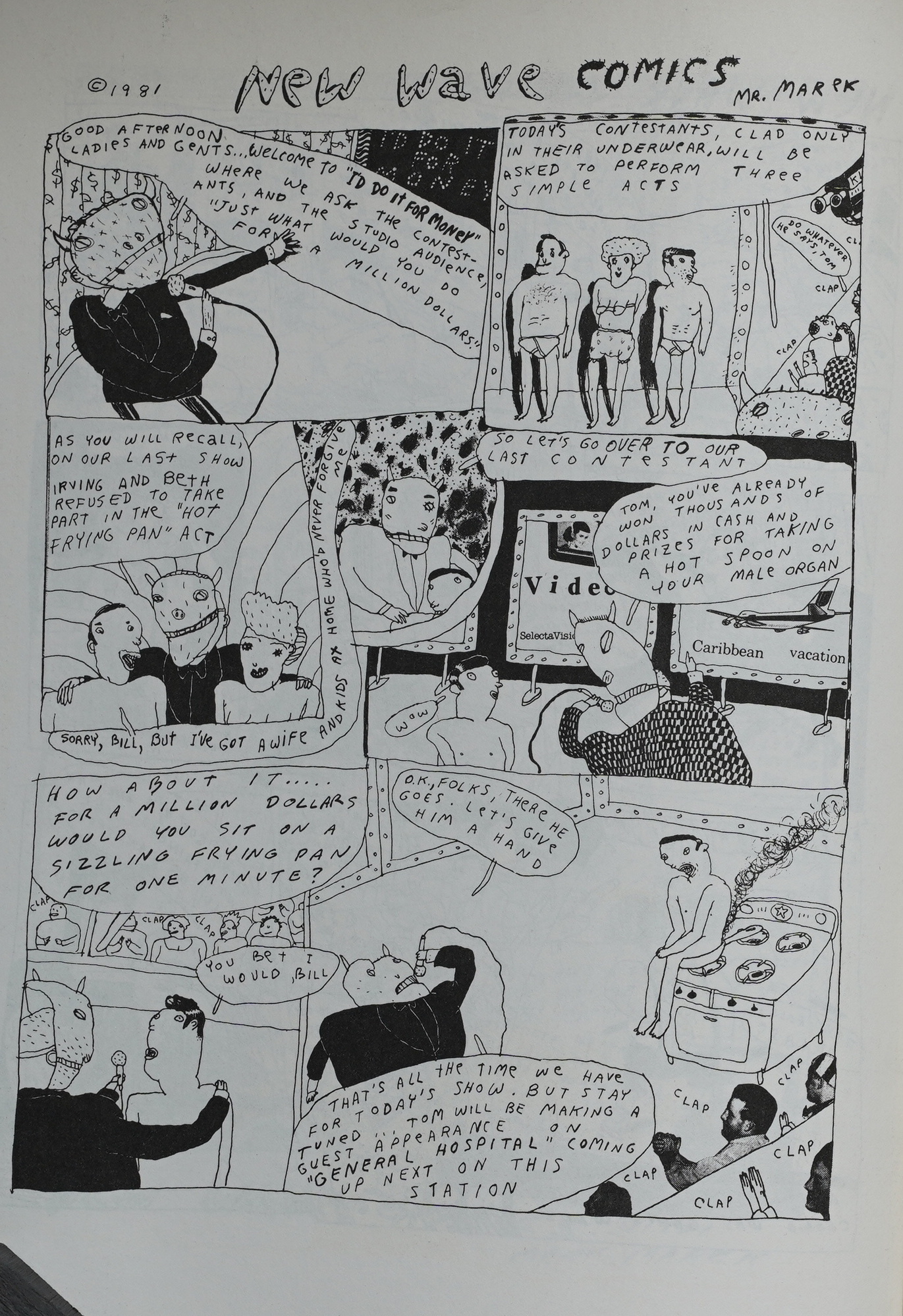 Huh. Did they have humiliating and painful quiz shows like that in 1981? I thought that was something that started happening a couple decades later. Perhaps Marek was prescient?

Anyway, it’s a fun read, and I remember liking it quite a lot as a teenager.

I was unable to find any contemporaneous reviews of this book. Or any review of it now on the web, for that matter.