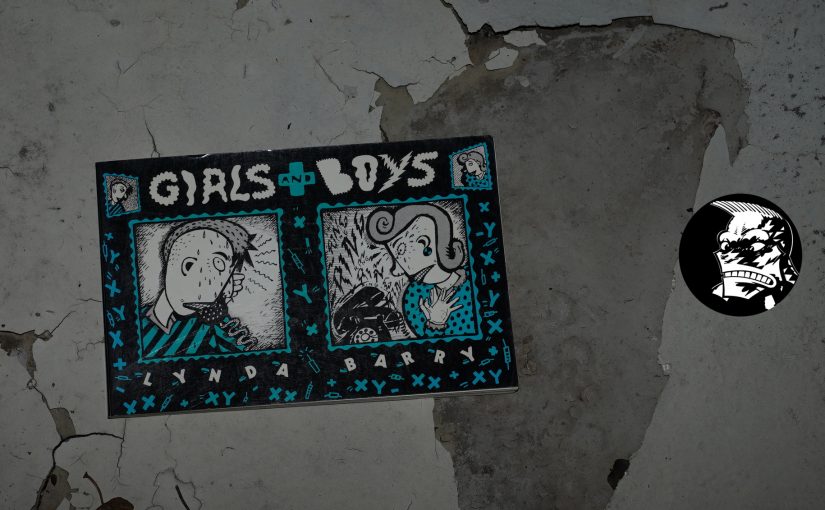 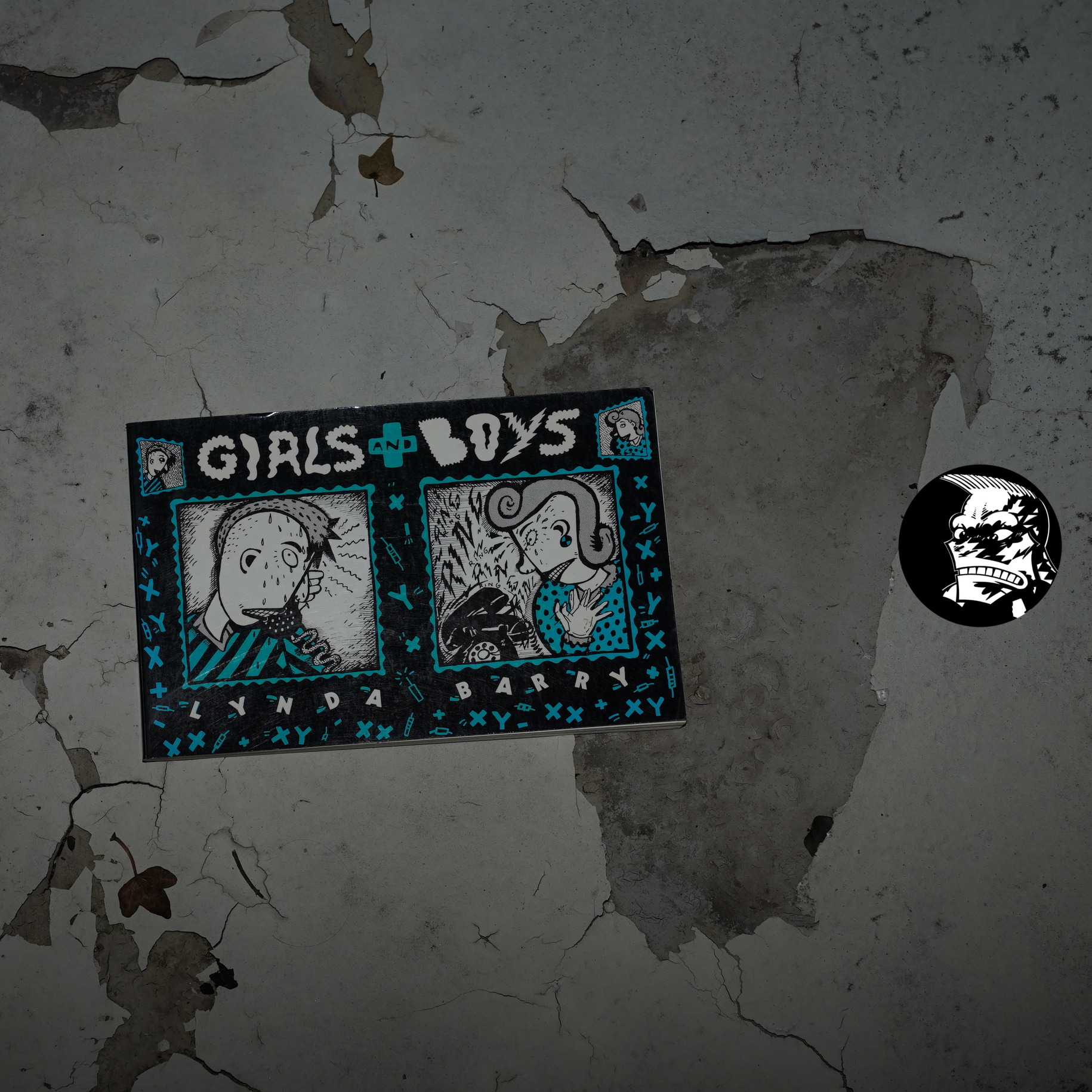 My first exposure to Lynda Barry was in The Comics Journal #92: 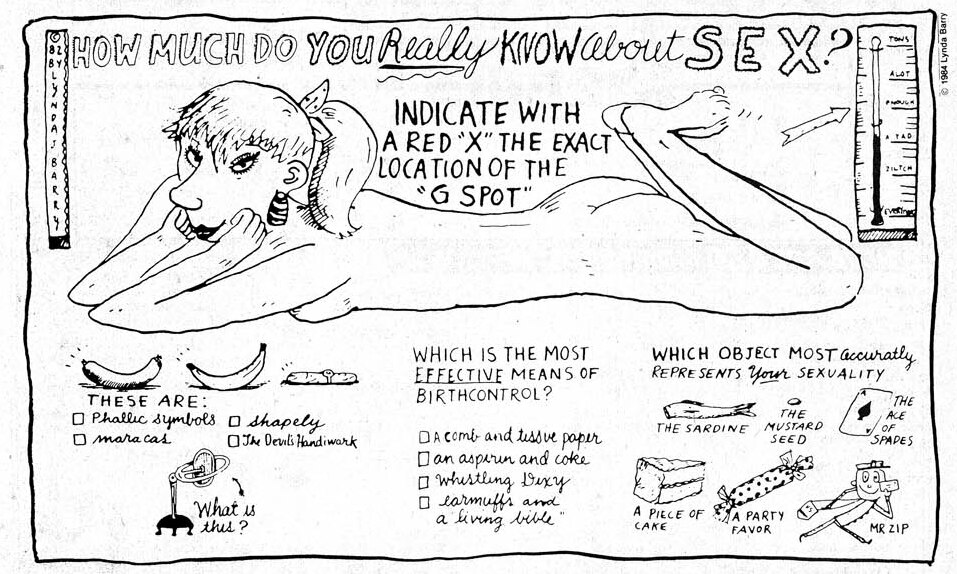 I was just fascinated by this, and I so wanted to read Ernie Pook’s Comeek. It’s not that these jokes are the funniest in the world (but they are funny) — it was the artwork. Her linework was just irresistible to me.

Barry was originally part of what you
might call the draws-like-a-five-year-old
school, but over the last couple of years
she’s developed one of the most expressive
styles anywhere in comics.

I don’t agree with his assessment of her earlier style at all… but I wouldn’t find that out until nearly two decades later, when I finally scored a copy of this book. 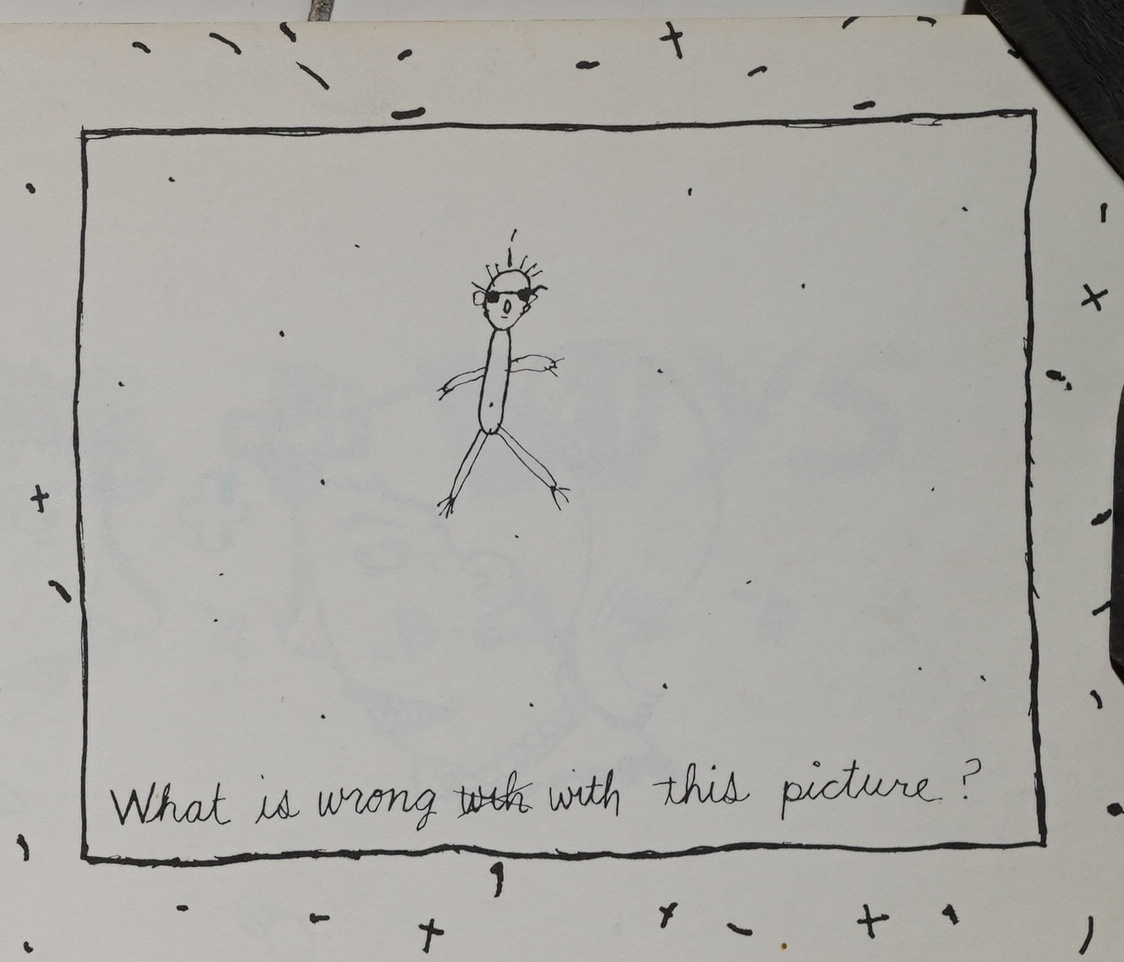 It asks all the deep questions.

This collection reprints the earliest Ernie Pook’s Comeek strips, but in no particular order. (And like many others covered in this “Punk Comix” blog series, she tries to avoid the actual “comic” word.) 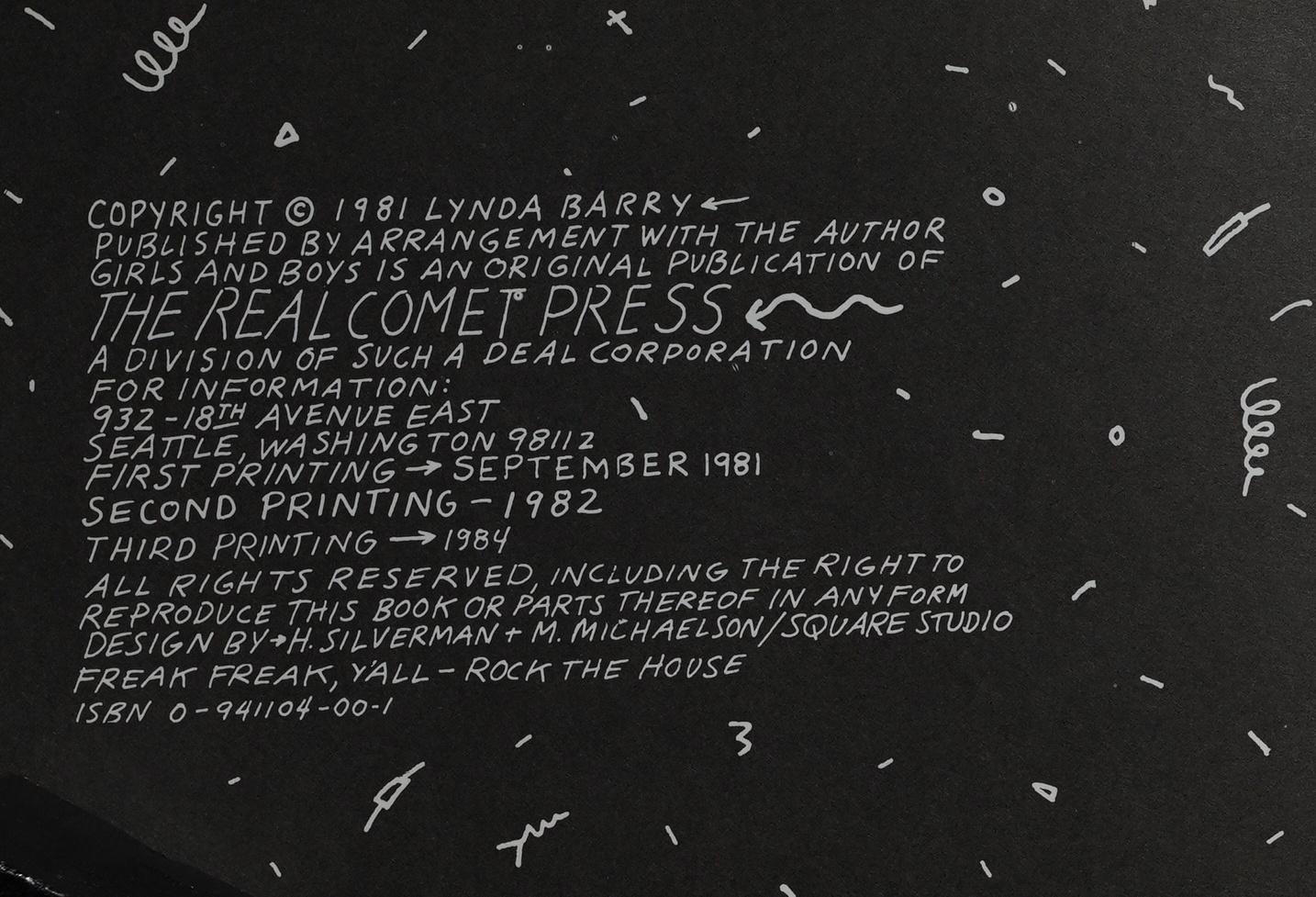 I guess this was a very successful collection — gone through three printings in four years.

I find it amusing that the very first strip in Barry’s very first collection is about teaching people how to draw comics. She’s now a professor and all her latest books are about this stuff, but she was totally into it from the start. (And there are no other strips like this in the first book.)

Barry’s most famous for her stories about children, and indeed, the second strip in this book echoes what she’d do a decade later. Even the name “Eddie” is reminiscent of “Freddy” (the kid brother in the family that’d come to dominate the strip). But there aren’t any recurring characters at this point.

I like the design of these books. It’s not an unusual format for alternative comic strips (Sylvia, Dykes To Watch Out For, etc), but it’s just so right for these comics. And I love the little messy lines everywhere in the margins… which are different on every page, so Barry sat an dotted every page before it went to the printer? 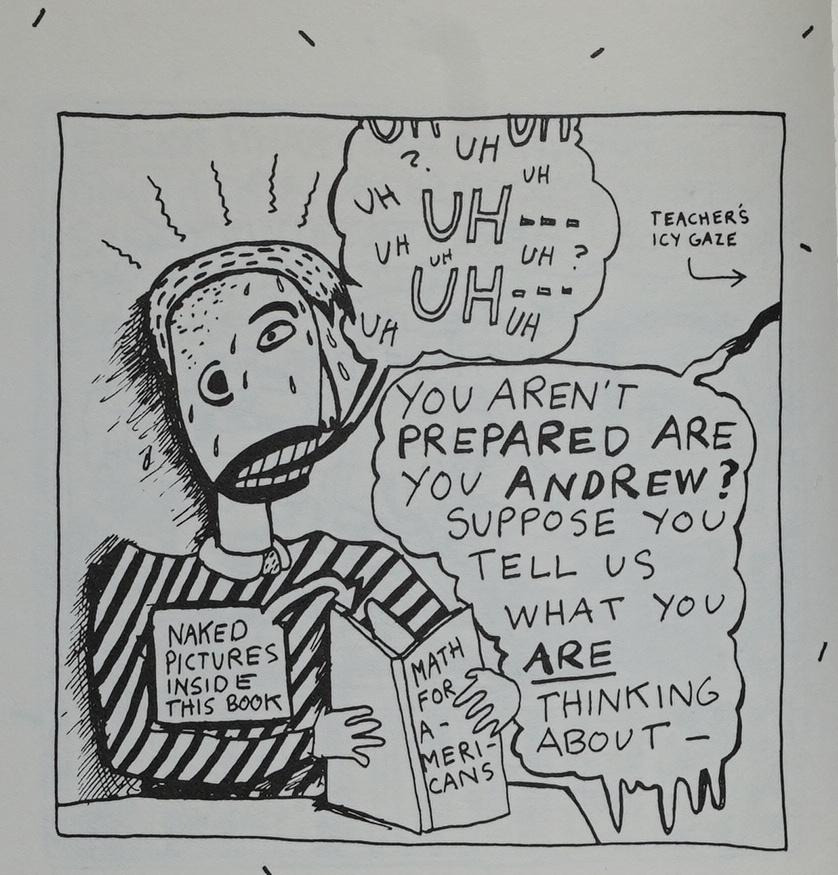 The artwork varies wildly, but perhaps that mostly due to these comics being made over at least a two year period. This style is very punk indeed. 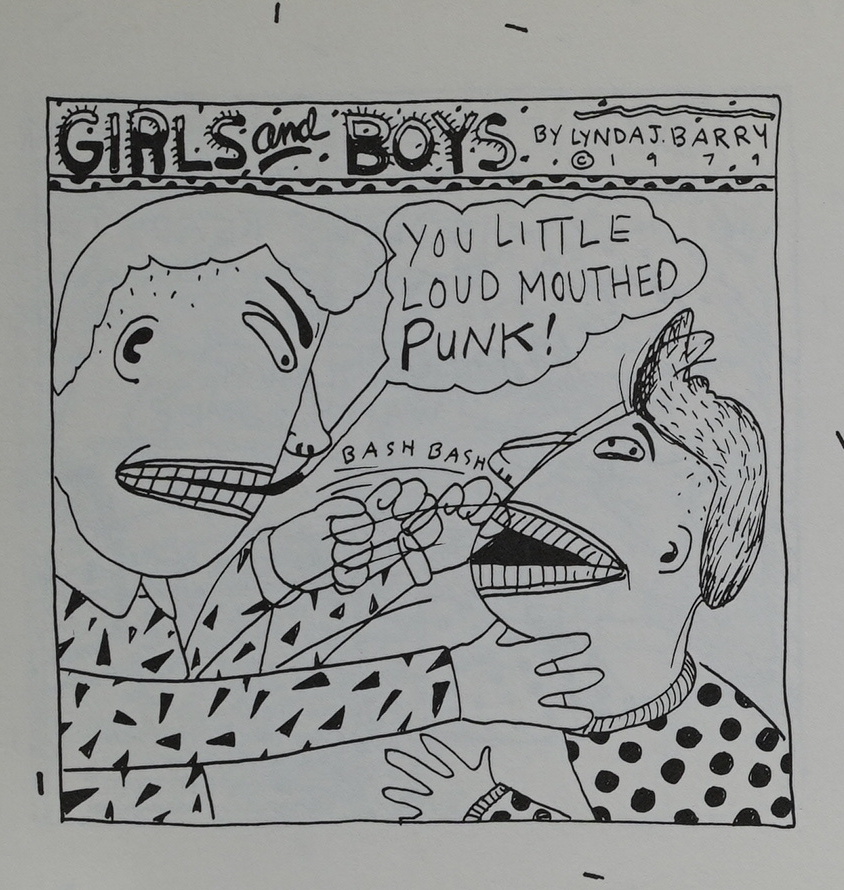 She has so much fun with the artwork, trying out fantastic stuff all over the place.

And some of these strips are downright harrowing. 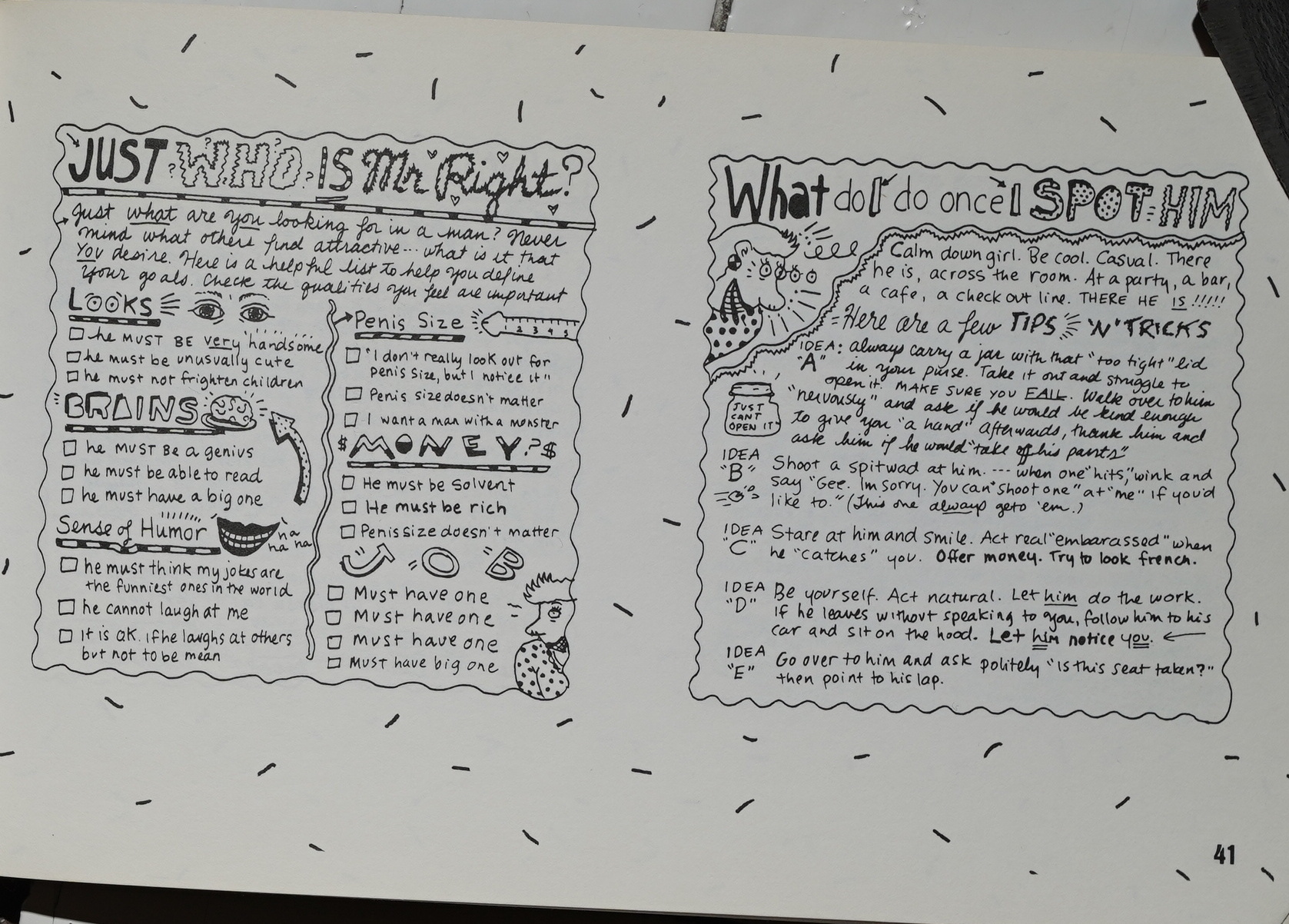 There aren’t too many of these strips… which is where she puts her best outright jokes. This one made me LOL out loud.

This is a very apt illustration of how men talk, but in my experience, there’s at least some talk about Emacs? 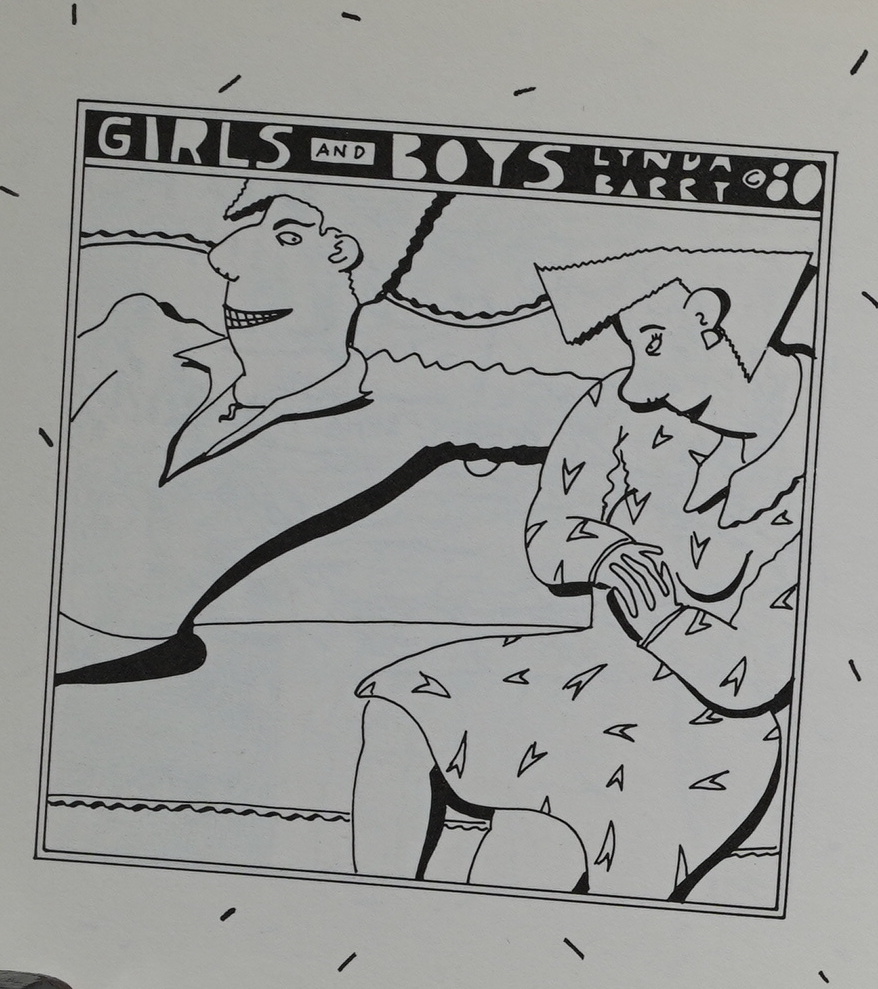 Look at that panel. Just look at it. Absolutely gorgeous.

It reminds me slightly of Rick Geary… but also what Richard Sala would do about five years later? Am I way off base here? (Sala’s style would change a lot over the first few years, though.) 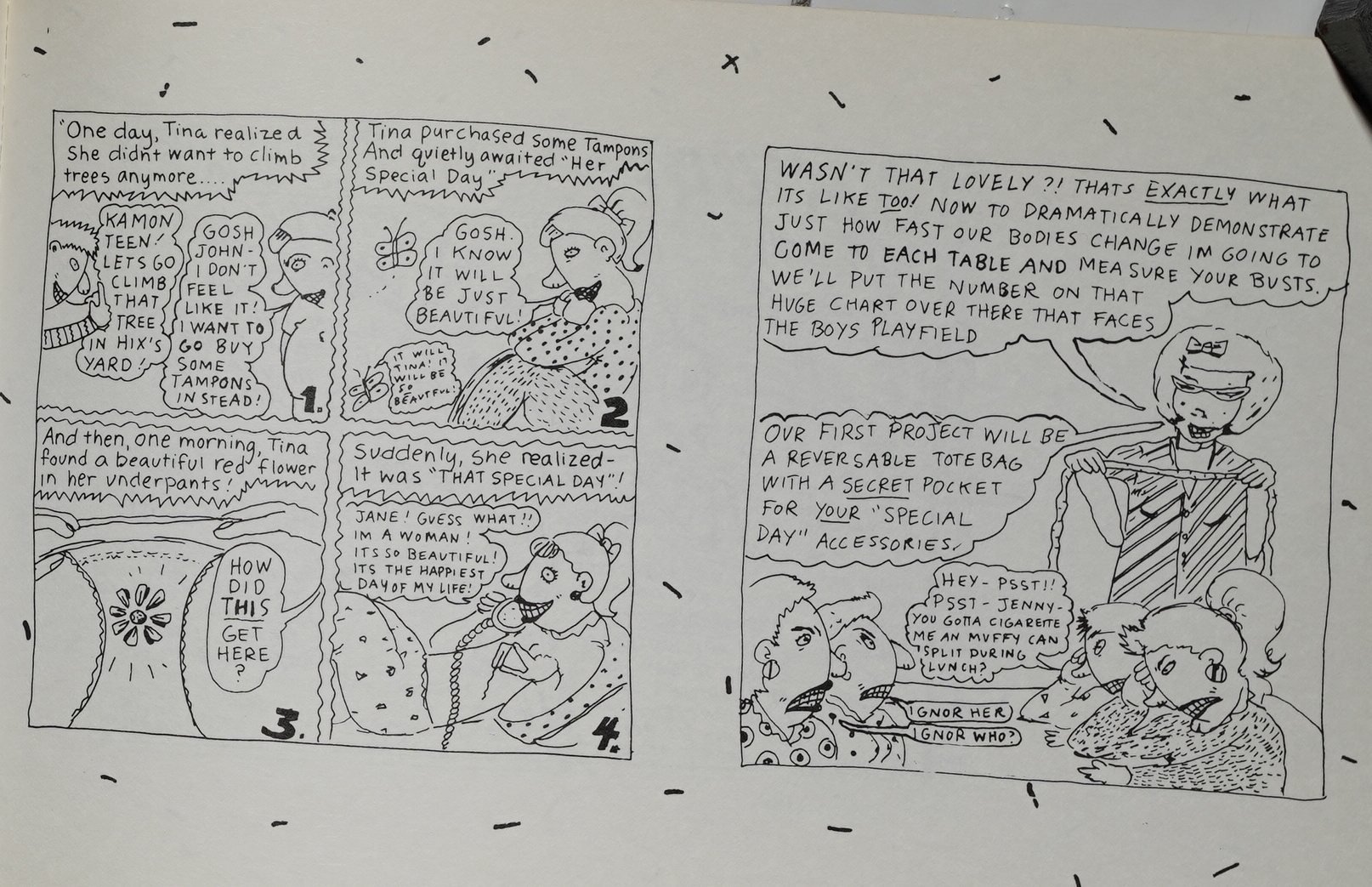 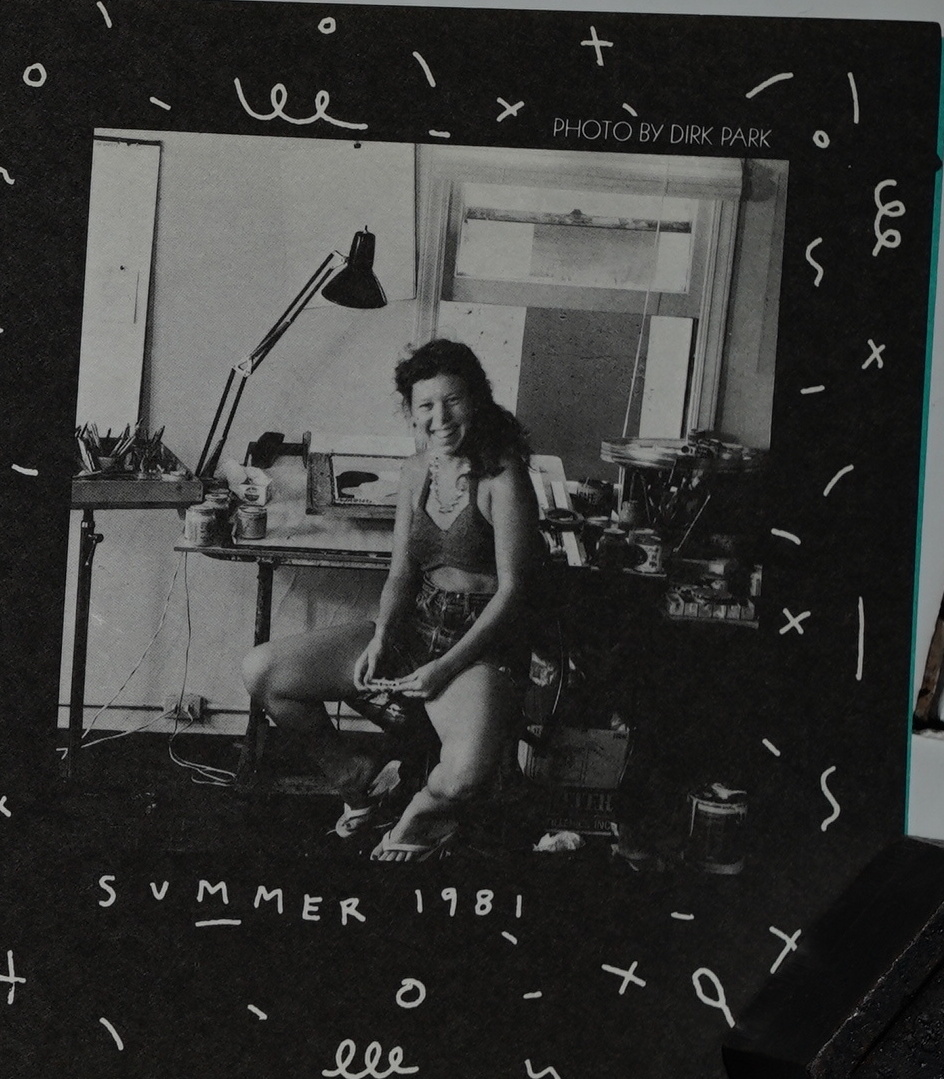 And finally a snap of the author.

It’s just a marvellous collection — the artwork and the stories mesh well, and it’s all fresh and original. And sad and funny. It’s a little masterpiece of a book. 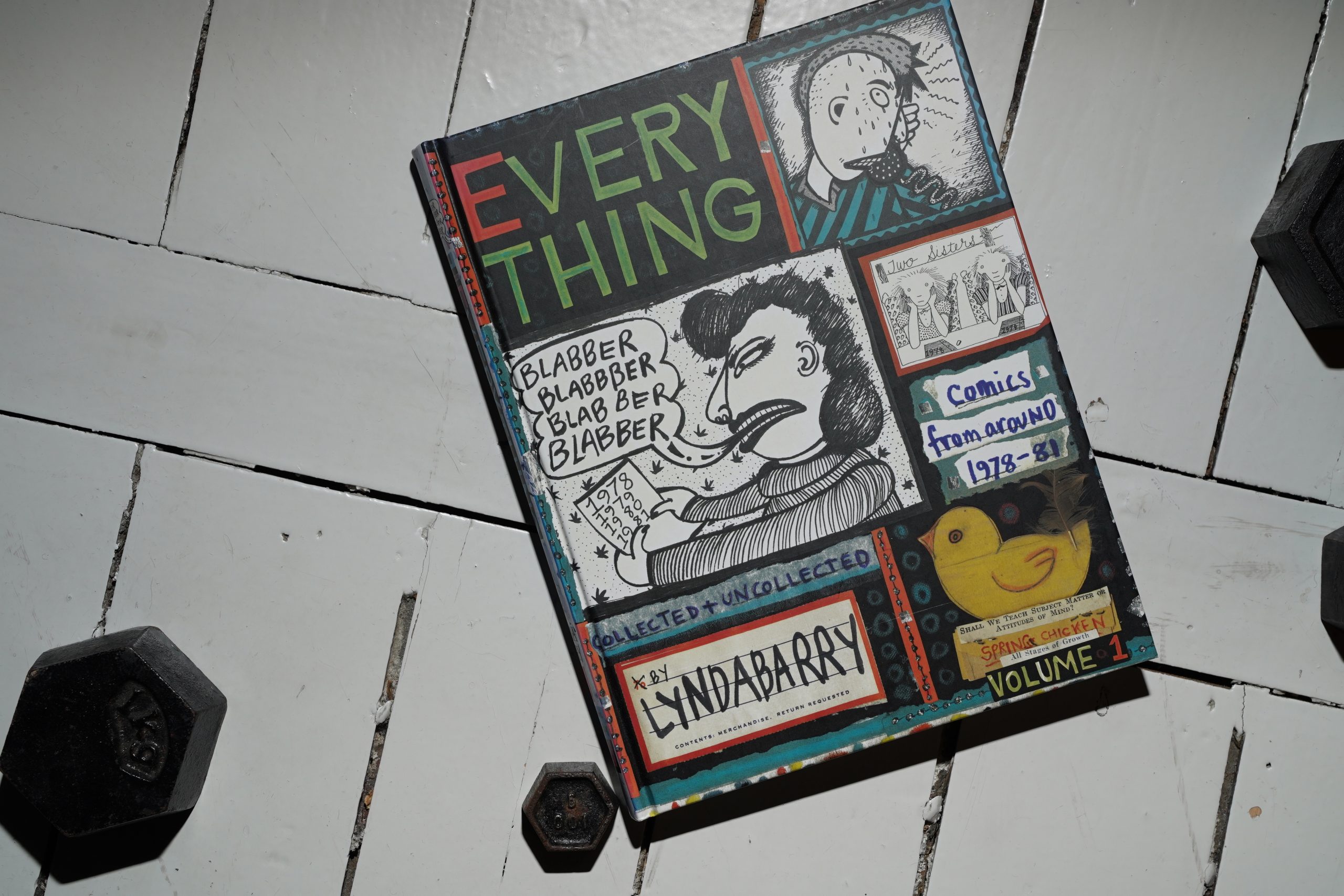 The Boys and Girls book was kept in print for quite a while, but was then part of the Everything vol 1 collection, published by Drawn & Quarterly in 2014. 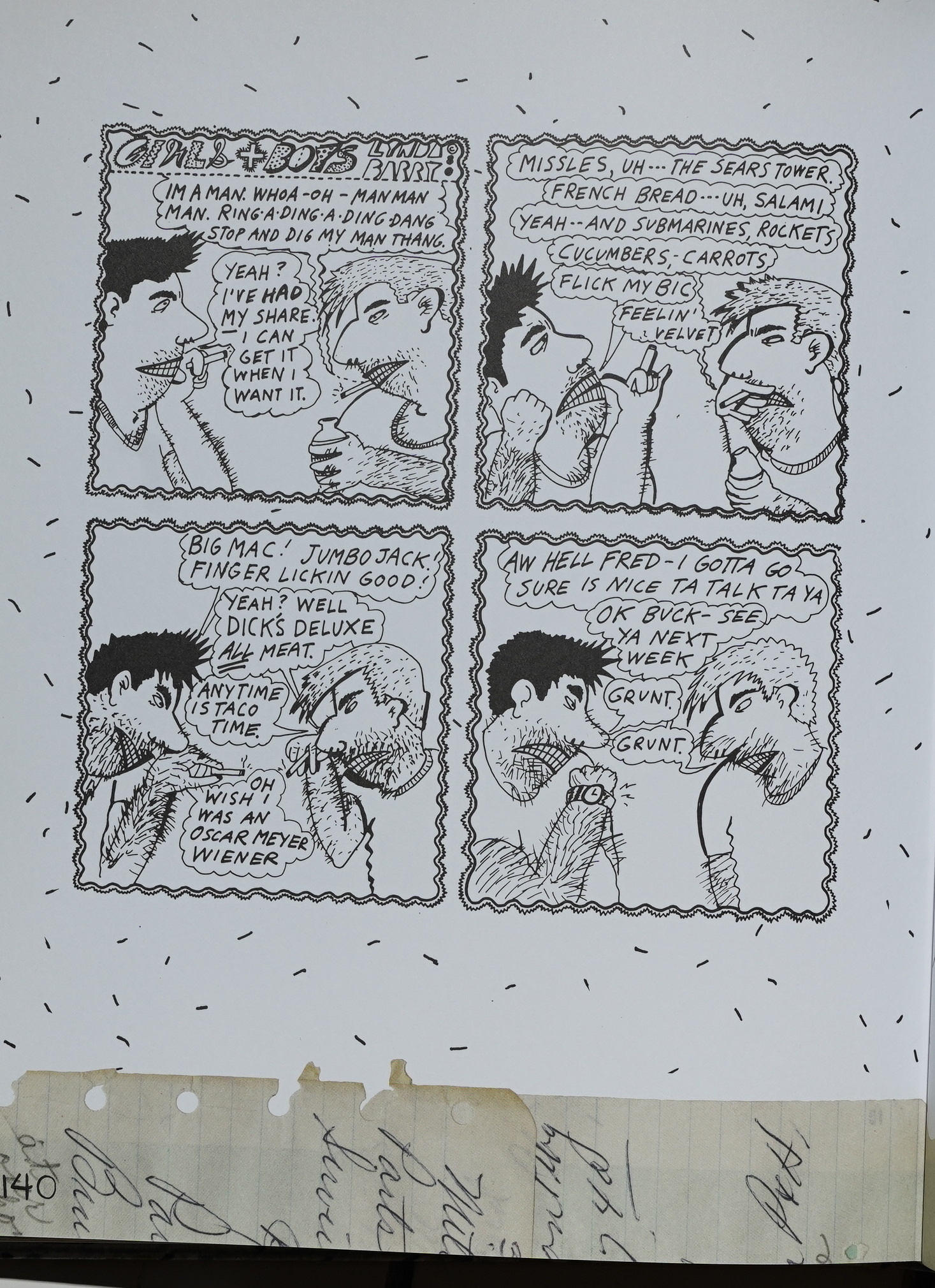 But printed in this format, which may be more true to the original strip format, but it’s… not as cute in this, more hefty format?

The second volume of Everything was announced in 2015, and then in 2018, and in 2019 (according to Amazon), but has yet to appear. So I guess most of the early Barry strips are out of print now? The first volume also includes a number of strips that were left out of the first volume.

And that first Comeek strip that I saw in the Comics Journal? I don’t think that’s been reprinted in any of the subsequent strip collections? Which means that there’s possibly a trove of un-reprinted Ernie Pook strips languishing for inexplicable reasons.

One thought on “PX81: Girls and Boys”