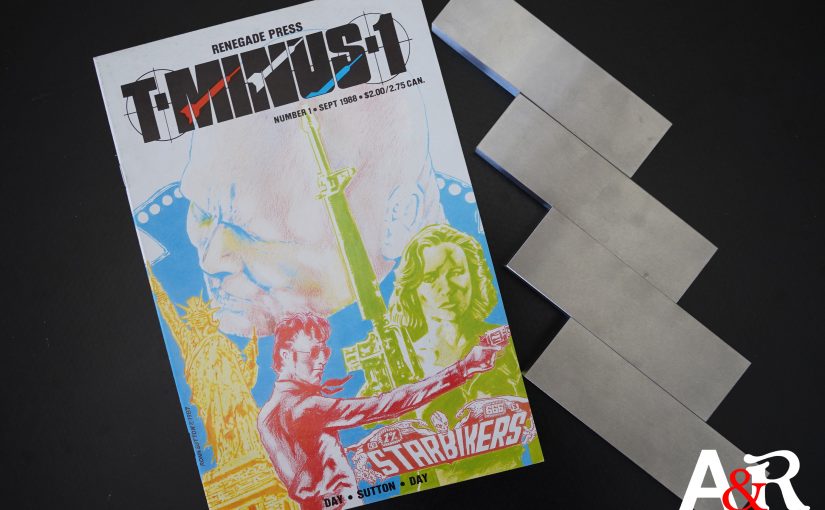 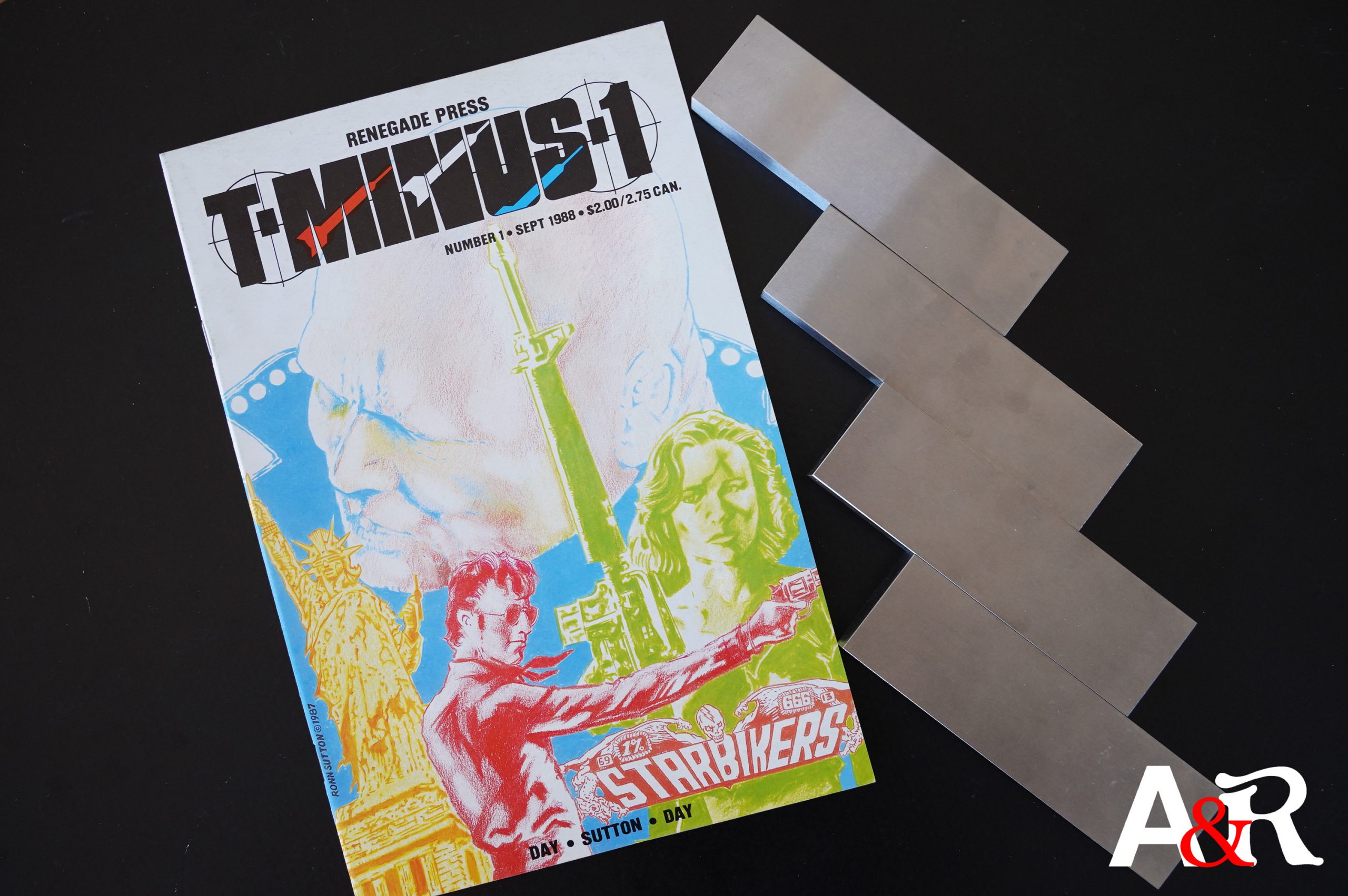 So this is basically yet another Day Brothers anthology (and Renegade had published more than a handful of thse)… but teaming up with Ronn Sutton this time around. 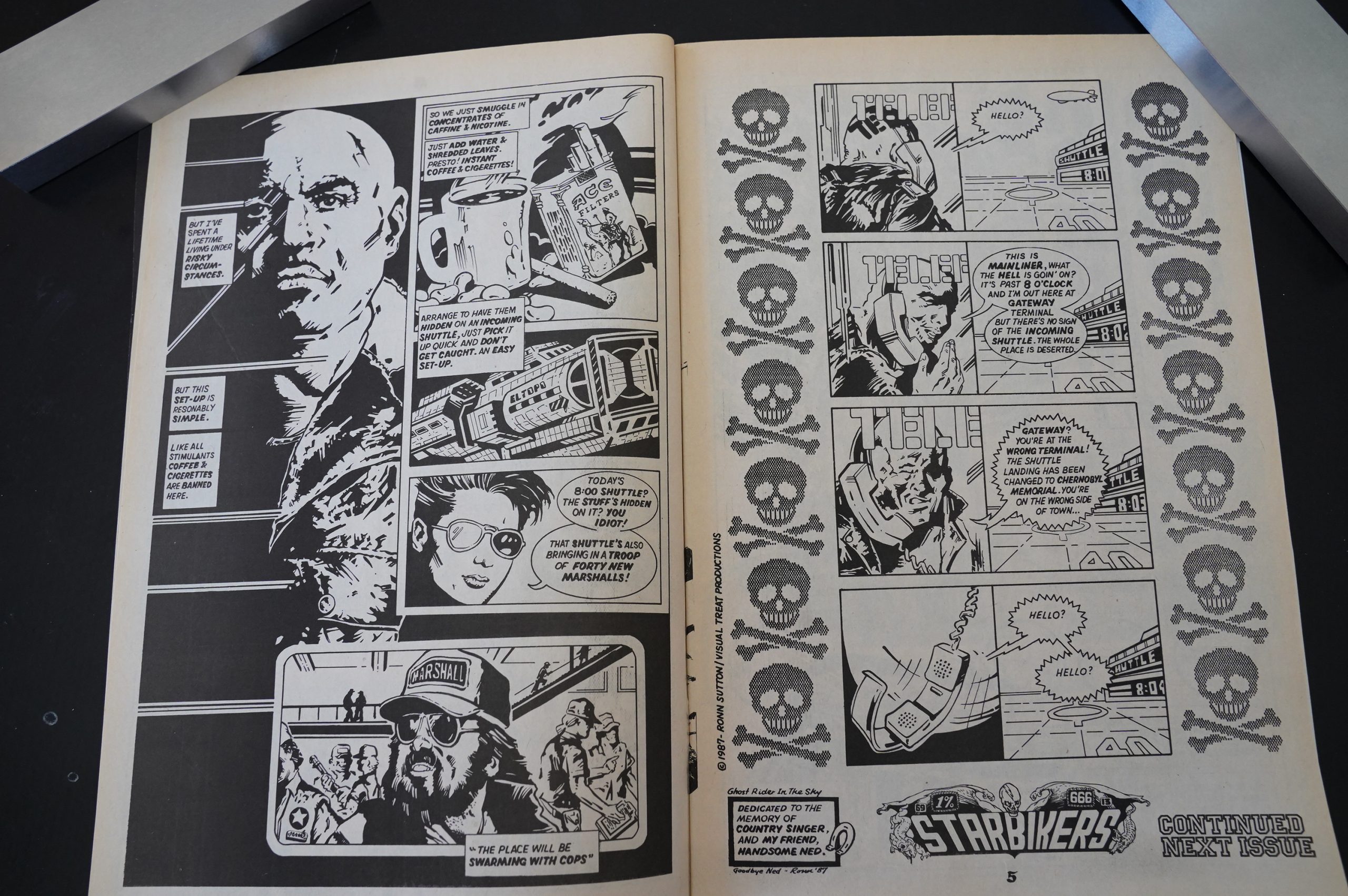 We lead off with a Starbikers story (David Day inking Sutton), and … it doesn’t seem to have been made for this comic? It says “continued next issue” and then continues on the next page. So this was made for a different anthology, perhaps? It’s also quite frustrating: The first two five page segments just set up the world this is taking place in, and then it ends. 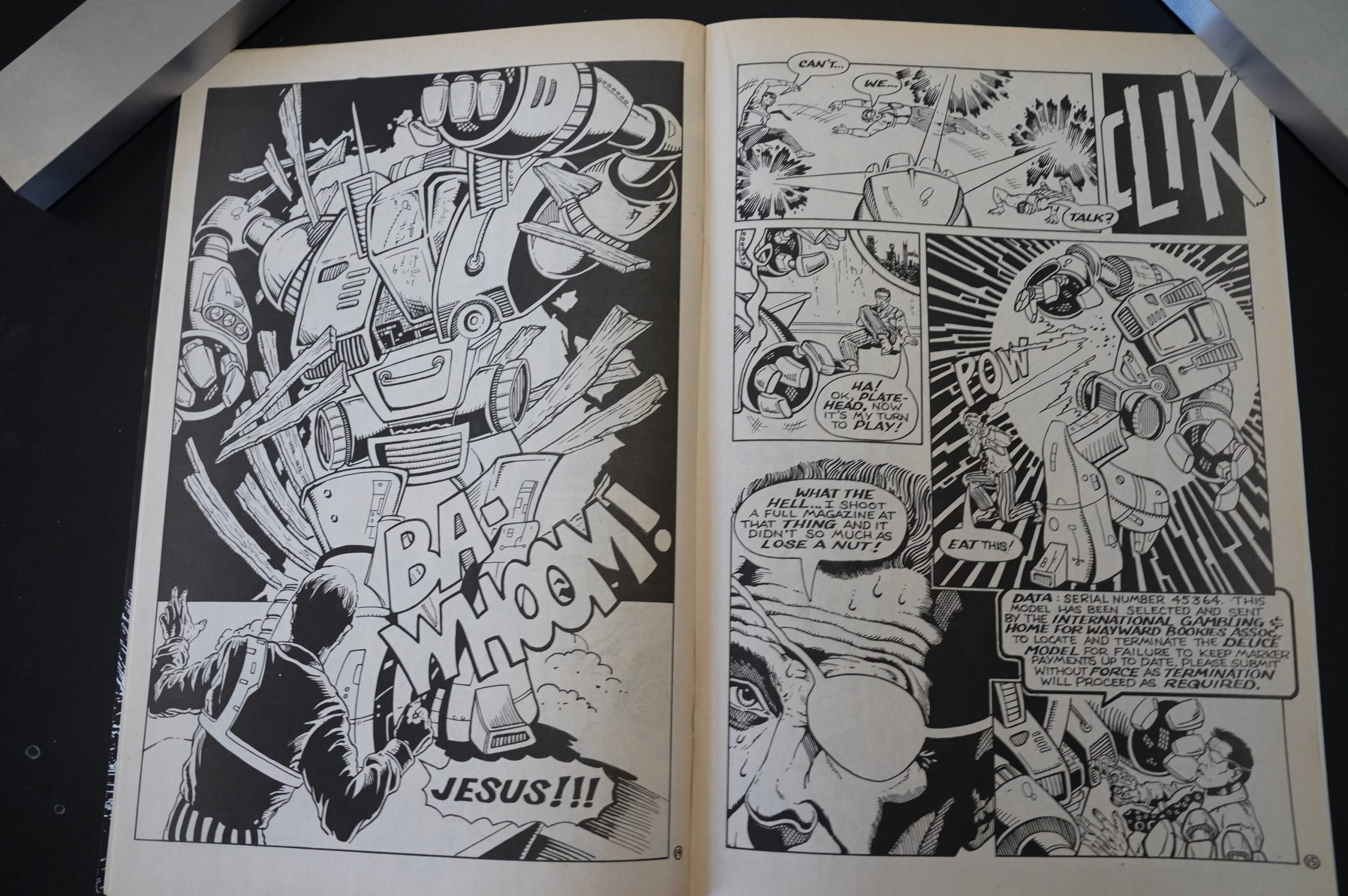 The second story has Sutton inking David Day, and it looks like they had fun working on this, but I really have no idea what this was supposed to be about. 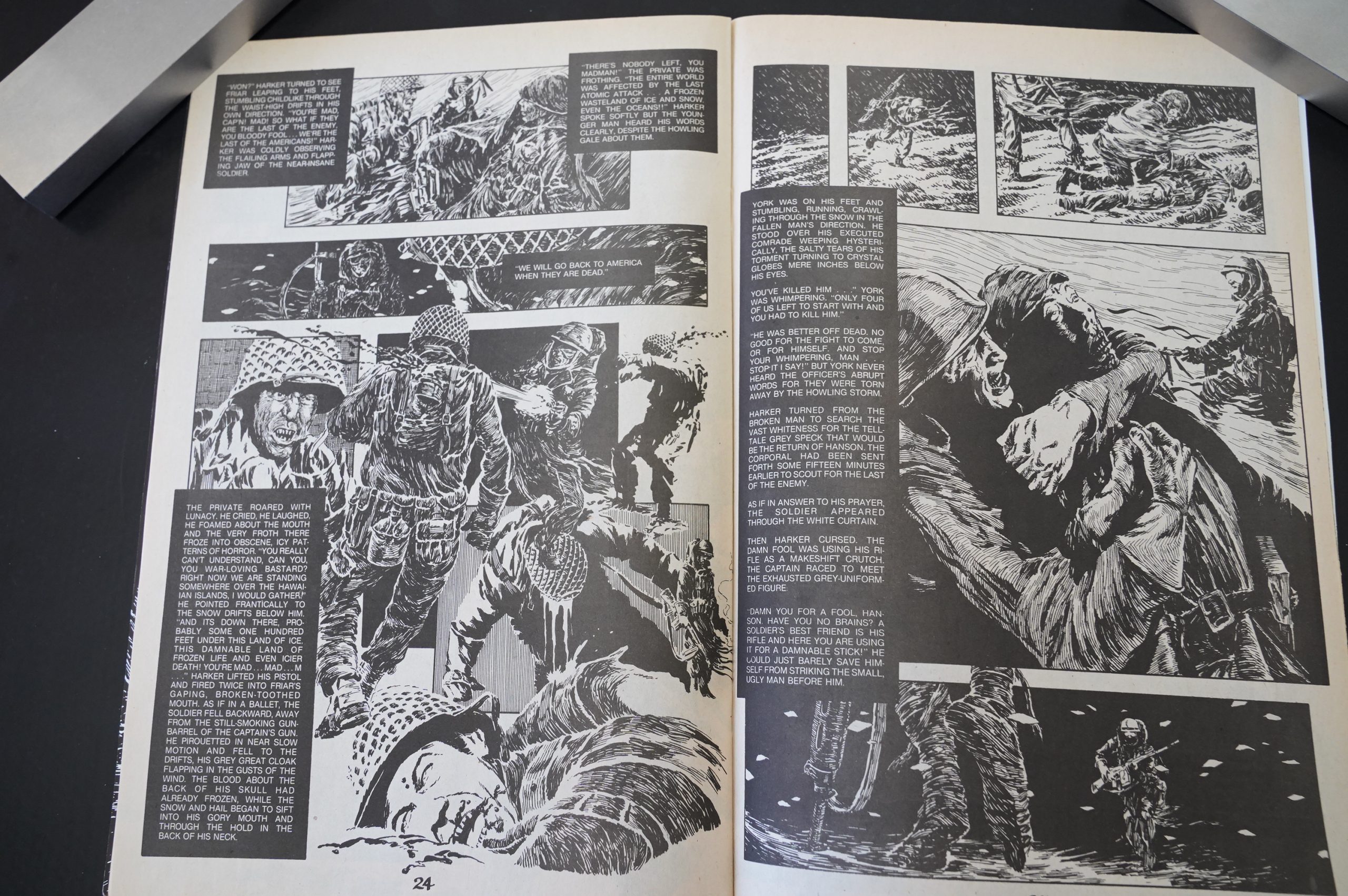 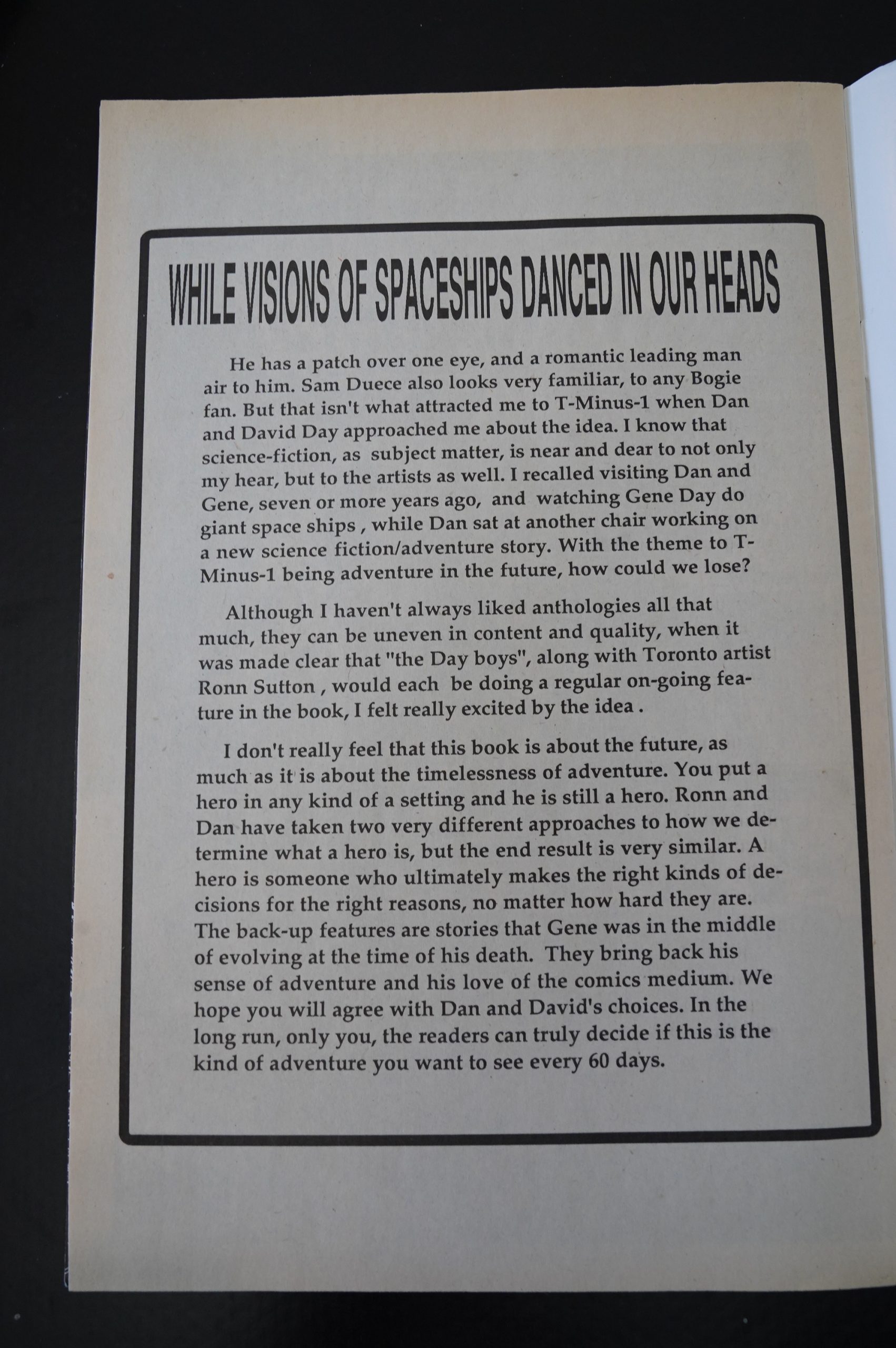 This page is presumably written by Deni Loubert? If so, she explains that she doesn’t really like anthologies a lot… which is weird, since Renegade published so many of them. 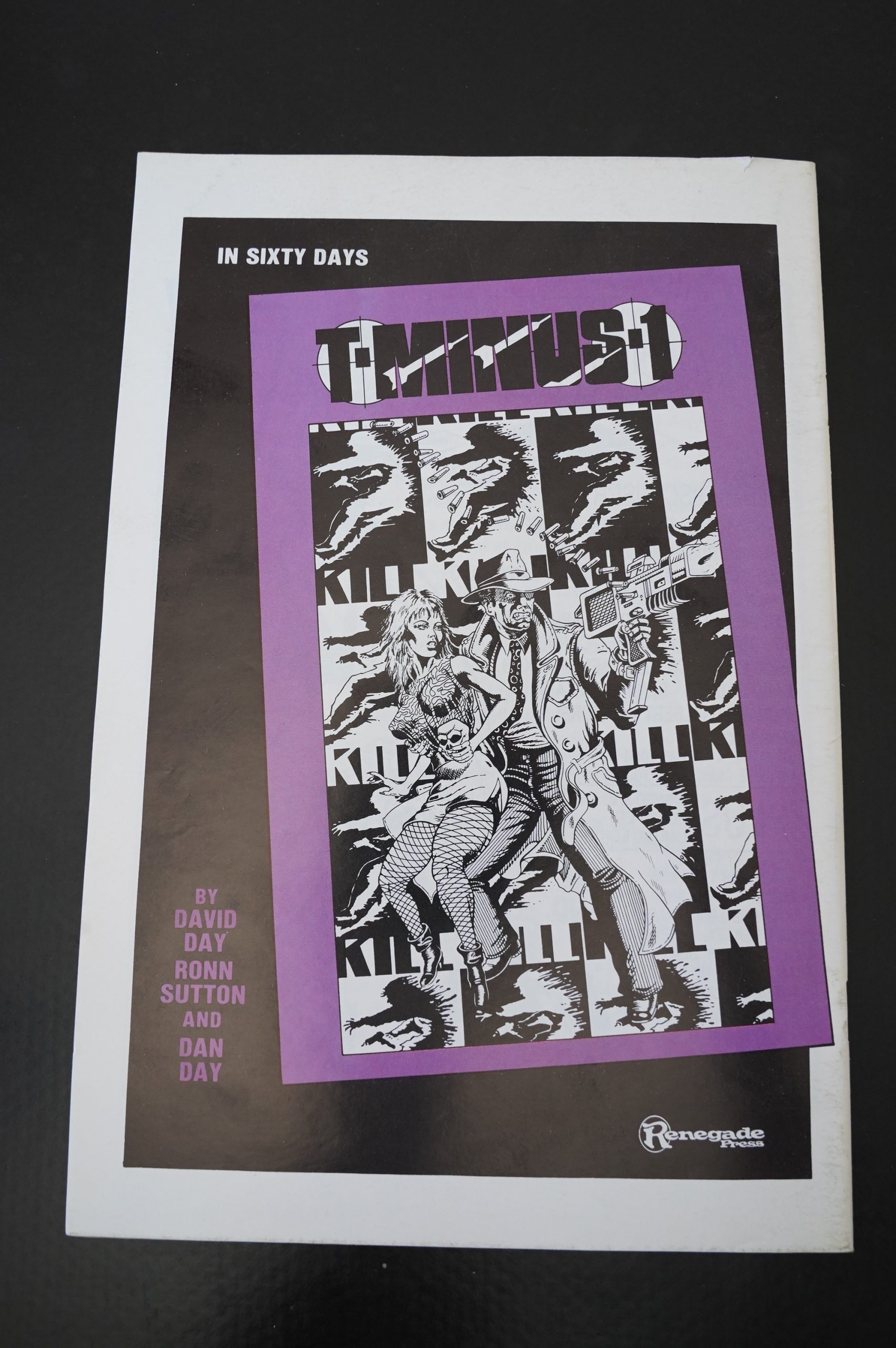 This was planned as an ongoing series, but that didn’t happen, since Renegade closed up shop a couple months later.

Considering how big anthology
comics were in the “golden age” it
seems hard to believe that there are
so few successful anthology books in
the comics field today.

T-Minus-l is a new anthology title
from Renegade Press (thank you, Ms.
Loubert).
It features three stories: a new
“Starbikers” tale, a “Sam Deuce”
story, and a story from the unfinished
file of the late Gene Day.
“Goon Shmv” is the Starbikers seg-
ment in this anthology’s debut issue.
The story and pencils are by Ronn
Sutton and the inks by David Day.
This episode is the best of the Star-
bikers tales to date.
The art is improved (Day’s inks are
very sympathetic to Sutton’s pencils
.and that’s sympathetic as in sym-
pathetic vibrations, or resonance… )
and Sutton’s writing skills continue to
grow.

In “Manic Monday,” we are intro-
duced to Sam Deuce, a 22nd-century
He looks like Bogie with a
patch over his left eye. He is cool,
professional and up to his eyeballs in
gambling debts.
“Manic Monday” deals with
Deuce’s attempts to avoid termination
by a giant robot for failure to pay his
debts.
The story is fast paced and
humorous. The art is very nice. David
Day can write and his pencils are well
laid out. Ronn Sutton’s inks seem as
good for Day’s pencils here as Day’s
inks were for Sutton’s pencils on
Starbikers.
“A Shroud of Tattered Grey” is the
final story.
It is an ultra-gritty post-nuclear-war
horror story that features Dan Day’s
art over a story by the late Gene Day.
The art is about the best I’ve seen
from Dan Day and the story is utterly
gripping.
If you want to see a thoroughly
plausible version of how the world
could end, this one is for you. If it
doesn’t give you nightmares, you
aren’t human.
Overall, T-Minus-l is well-worth the
two bucks you’ll have to pay for it.
It is intelligent, articulate and
effective on virtually every level. It
contains action, suspense, humor and
horror in equal doses.
I hope T-Minus-l succeeds (I mean,
sells). We need more anthology books
in comics and this one is first-rate.
GRADE: VERY FINE

Ronn Sutton is also offering an
ongoing storyline with Starbikers, a
group of individuals which Sutton
describes as “Hell’s Angels of the
future.” In this particular future, Star-
bikers Sorry Boy, Teflon, and Rockabilly
the Kid ride “hover-bikes” and square
off against the law enforcers from the
local starship. In issue #1, Show,”
the Starbikers must battle 40 marshals
when they attempt to obtain, the
contraband items caffeine, nicotine, and
alcohol. That plotline continues through
to issue #4, when Sutton involves the
group in an intergalactic war. Sutton,
who is writing, drawing; and lettering the
series himself, gets an assist on the first
issue when David Day provides the inks.
(Conversely, Sutton does the inking on
David Day’s first Sam Deuce story,
“Manic Monday.”) Sutton promises lots
of action, and says his artistic style is
heavily influenced by the work of Jim
photo references,”says Sutton.. e includ-
ing those of himself. “Rockabilly the Kid
looks like, well, a lot like me,” comments
Sutton.

It looks like these plans were abandoned after Renegade shut down.