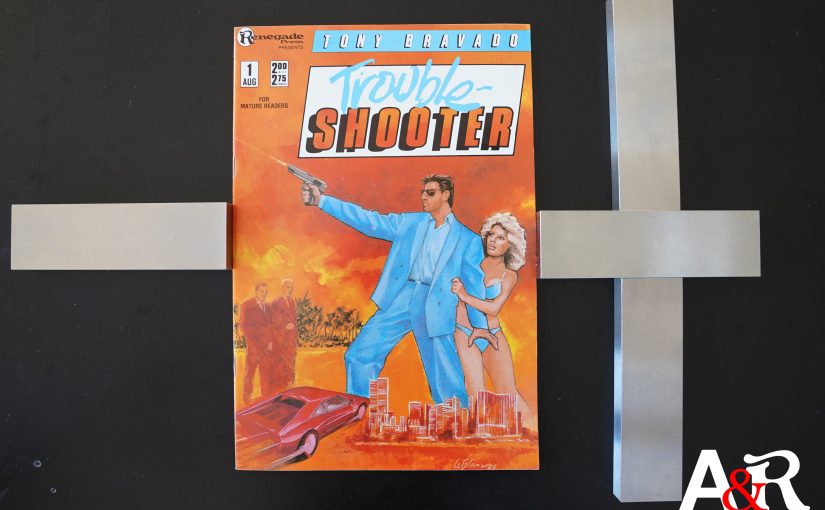 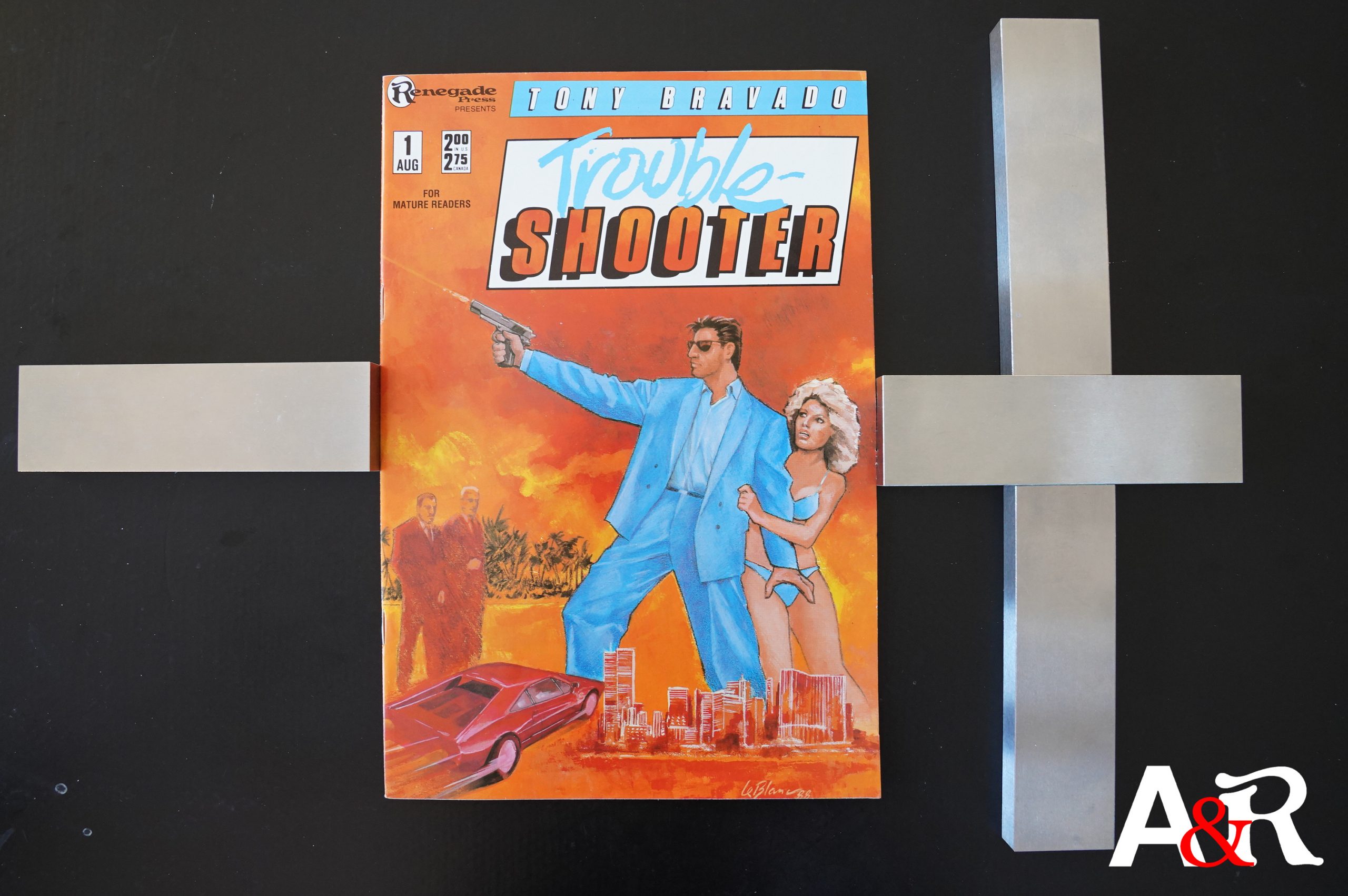 You may remember Dave Darrigo from Wordsmith… or not. So here’s him with a couple of newcomers to comics. Let’s read the first three pages. 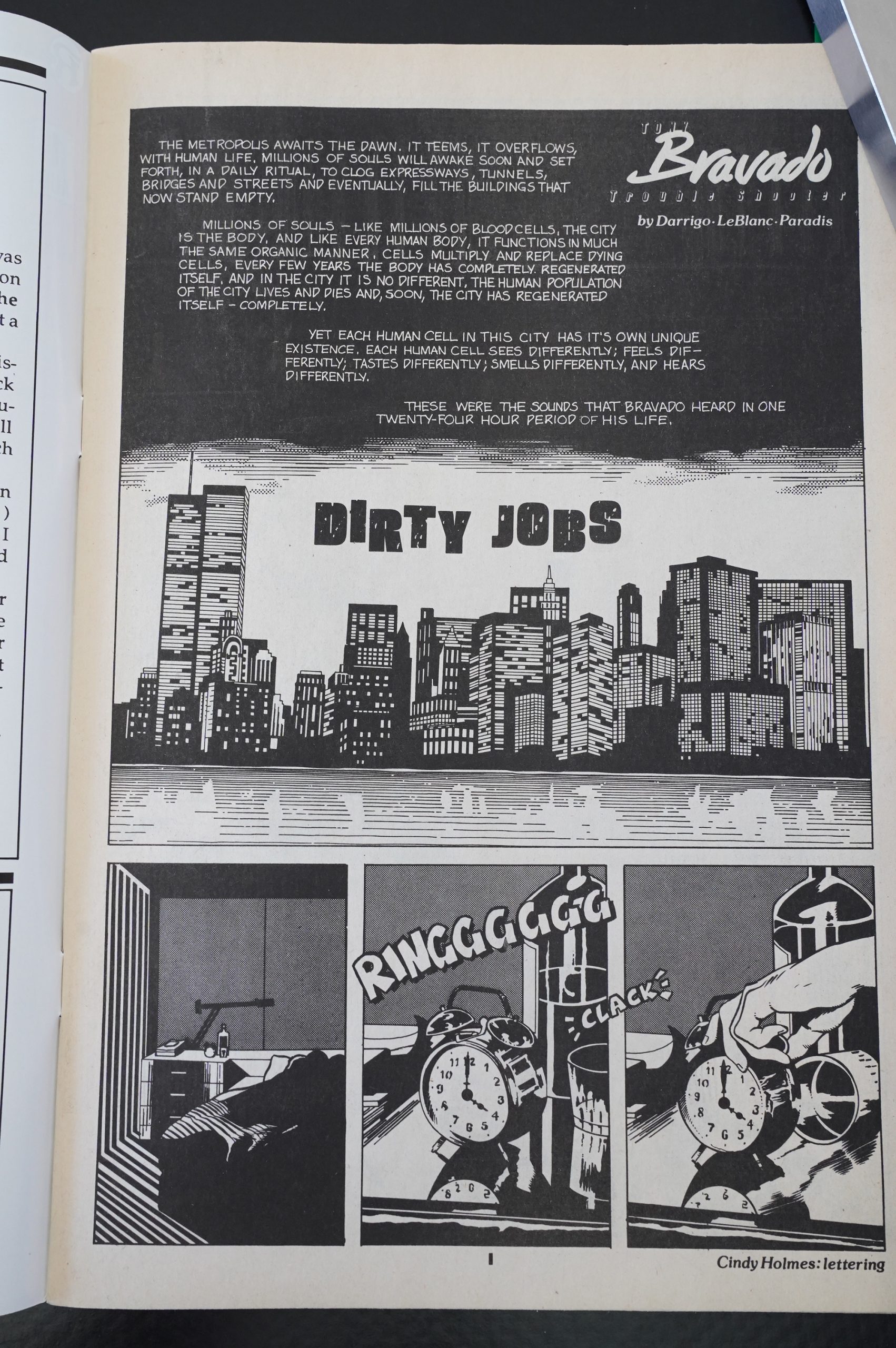 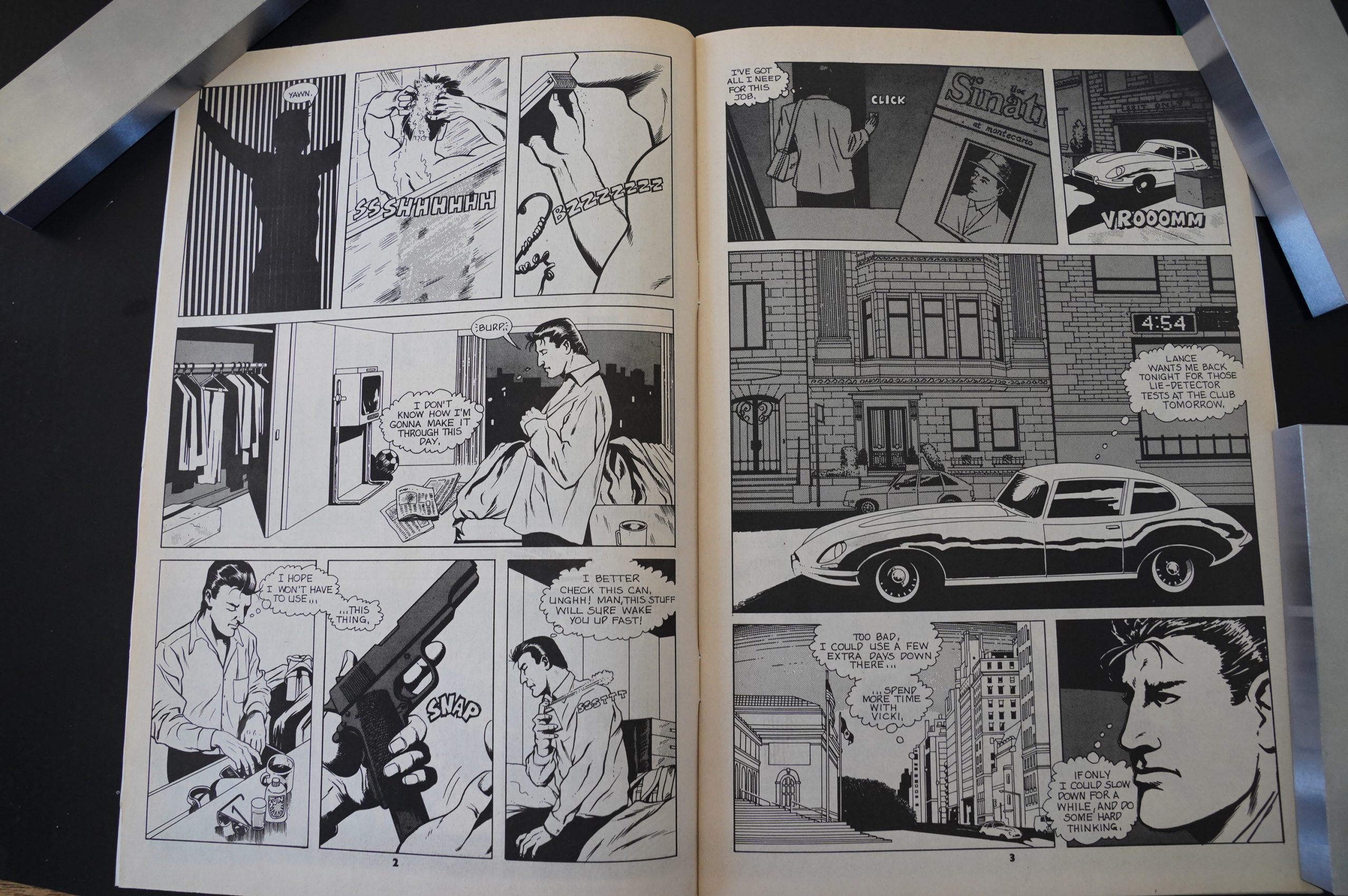 Well… ouch? The artwork is very variable — Tony’s chin grows and shrinks in every panel. And… that’s a very odd-looking car. And… is Tony using a can of deodorant to wake up? That’s a very strange ritual. 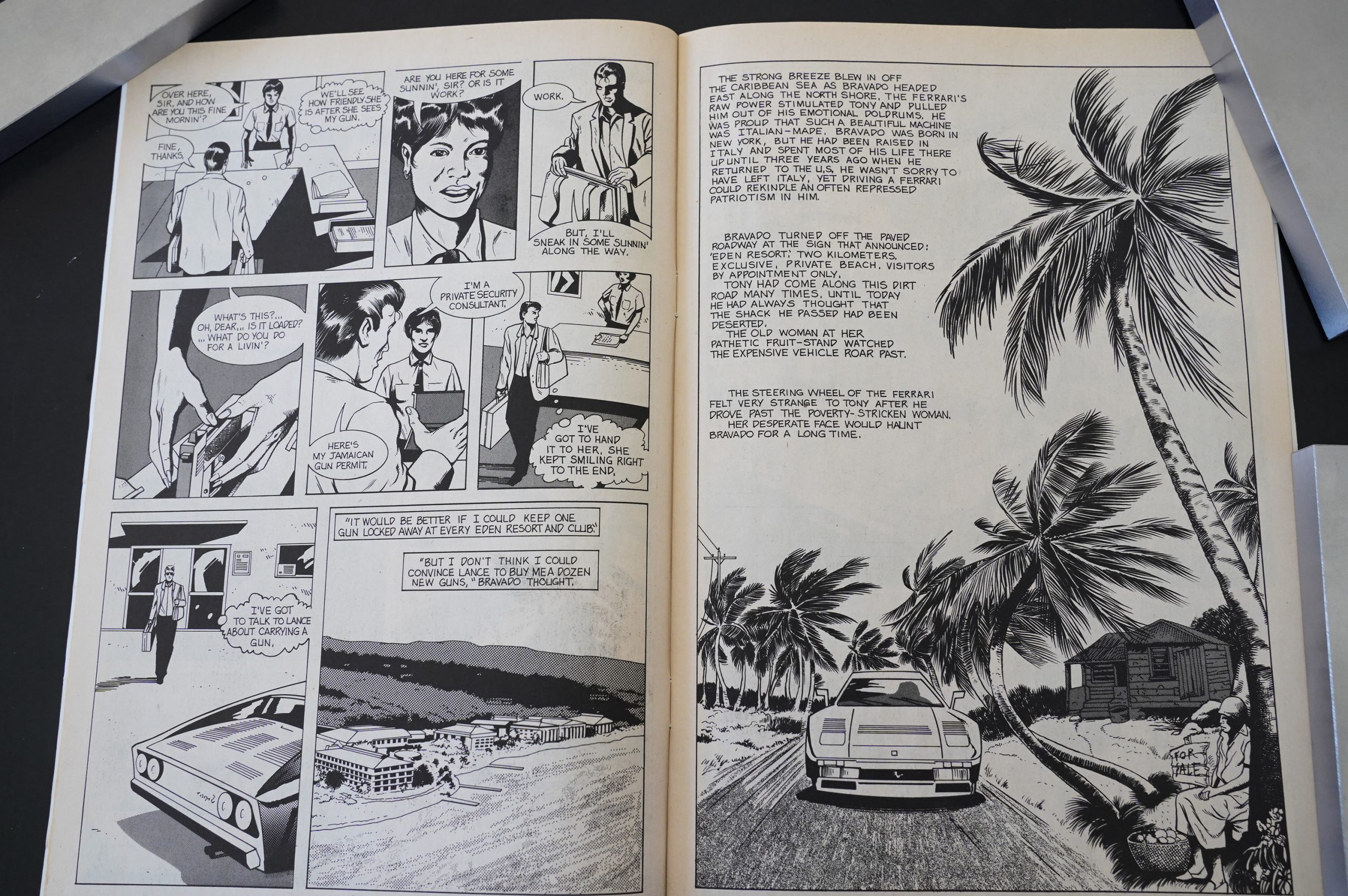 Anyway, Tony Bravado is apparently a tough guy for hire… but one that’s well-read, and who is ambivalent towards most things, like whether to use a Ferrari or not, and is easily depressed by looking at *gasp* poor people.

So we’re talking Hit Guy With A Heart Of Gold. It’s not my favourite cliche.

But the writing here isn’t that bad? 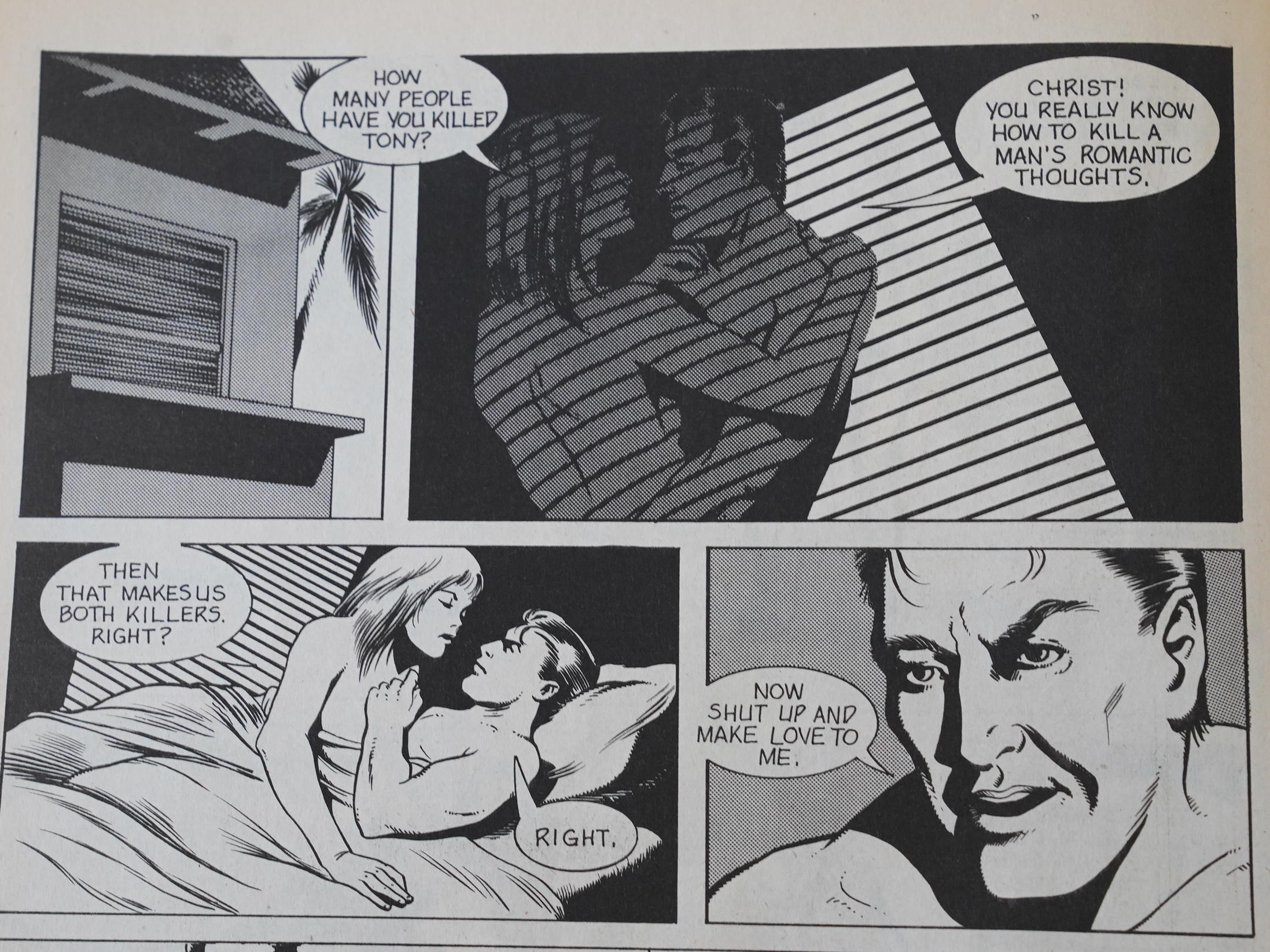 Here on the other hand…

Well, that makes a lot more sense? … or does it? 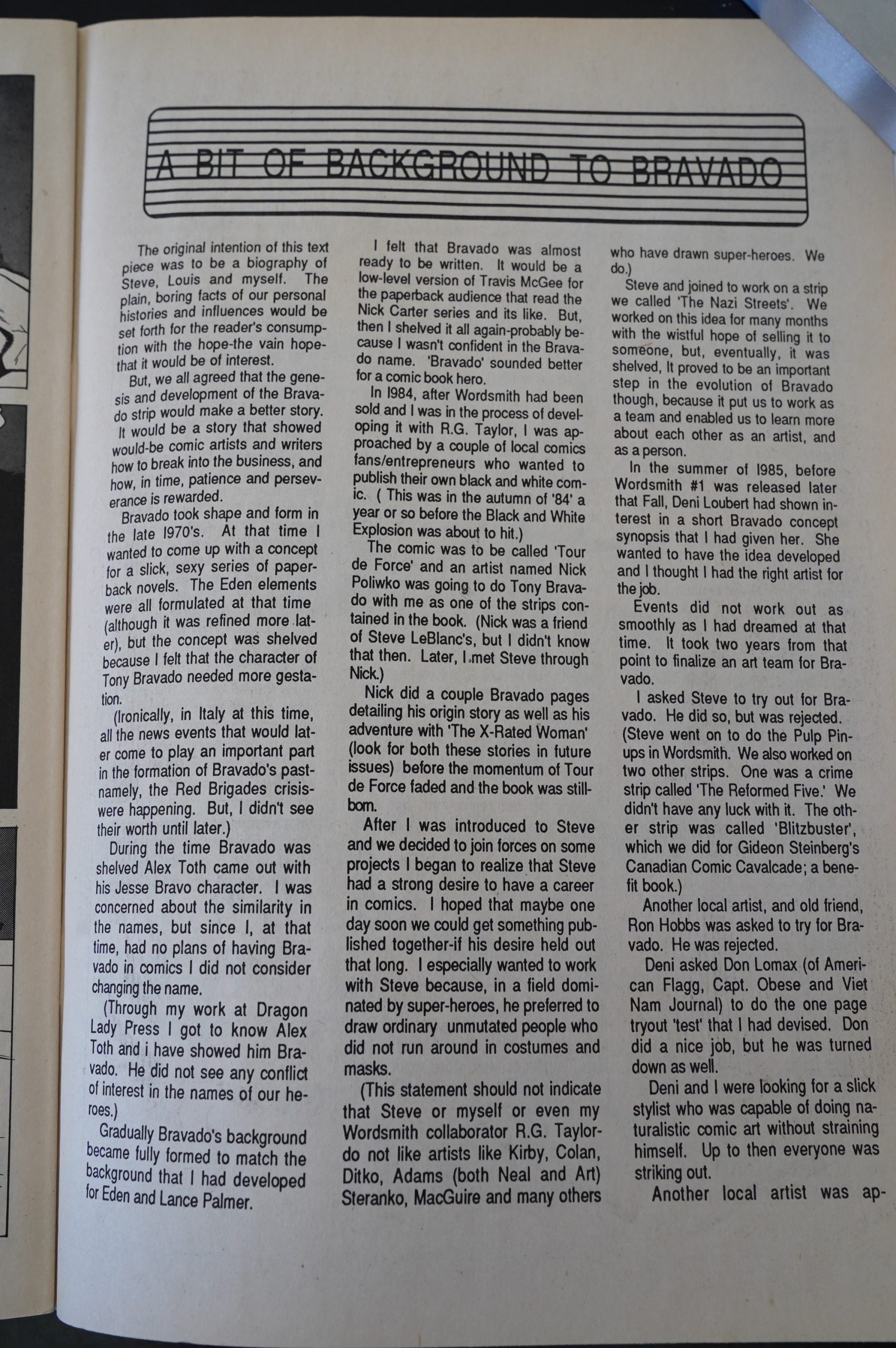 We get a history of the character — Darrigo had been kicking around the Tono Bravado idea since the 70s, but when it came time to make a comic book, they weren’t able to find a suitable artist. So they tried out a bunch of people, before settling on these two (after initially rejecting LeBlanc). 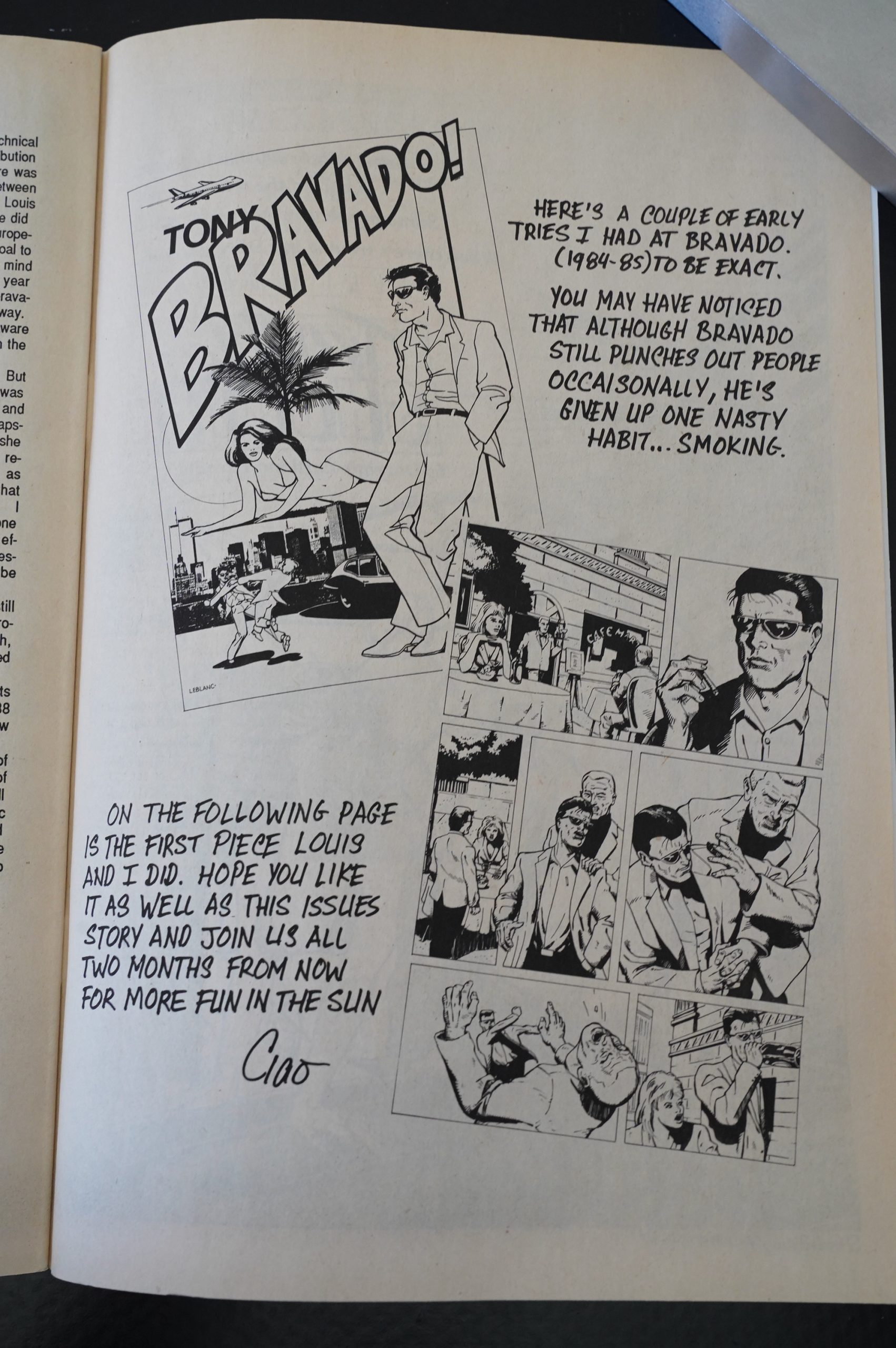 And this was apparently planned as a serial, but Renegade was in the process of going under… so the last four issues were published by Diamond Press (who also adopted a handful of other Renegade series).

“I’m trying to avoid those typical comic
book cliches,” says Dave Darrigo of his
newest creation, Tony Bravado. “This
book is about a P.I. character, but not
in the classic sense.” Tony is a loner, and
he has a job that uould be a fantasy job
for any male… he works for the Hugh
Hefner-like Lance Palmer. His job takes
him to glamorous and exotic places
around the world, full of warm beaches
and hot ladies. “But,” Darrigo com-
ments, “Tony isn’t happy. He’s over 40.
He has a long history as a former cop,
anti-terrorist, and bodygyard. He’s at a
point in life where he’s looking for his
roots in a jet-set lifestyle.”
Throughout the course of this series,
with issue #1 due out in early August,
Darrigo says that Tony will be taking
good, hard looks at his life. “Bravado
will have introspective characterization,”
says Darrigo, “and in case that scares
people off, be assured that there will be
a fair share of gun play and fisticuffs.”
Darrigo believes that readers can experi-
ence—feel—violence more intensely
when they are familiar with the charac-
ters involved, be they good or bad.

“The Bravado series comes from
my background as a mystery-
detective reader and writer,” he
says.
“I’ve always been amazed
that of all the genres in comics that
have gone into extinction, crime
comics was one of them.”
Although Darrigo plans for
Tony Bravado to be less ex-
perimental and more commercial
than Wordsmith, it will feature a
similarly true-to-life art style.
“It’s very hard to find artists
who like to draw realistic stories,”
he points out. “By that I mean that
comic artists don’t necessarily like
to draw unrealistically, but they
don’t like to draw the natural
three-dimensional things they see
outside their window. There
always has to be a fantastic el+
ment to it. Fortunately, Steve
LeBlanc, and Louis Paradis, the
inker, are both of the same mind-
set. They both like to draw in a
naturalistic way.”
Darrigo credits a number of in-
fluences on Tony Bravado, from
European private eye comic
heroes like Archie Cash and
Bruno Brazil, to American TV
shows like Miami Vice, as well as
John D. MacDonald’s Travis
McGee novels. The European feel,
Darrigo warns, includes a realistic
handling of the hedonistic world
Of Tony Bravado.
“There’s a lot of nudity in it.
Tony gets laid a lot,’ i Dave Darrigo
announces, “but there’s no explicit
sex.”

As with Darrigo’s other Renegade title,
Wbrdsmith, simple description of the
book’s set-up is very superficial. Under
the surface boil “the nastier lusts,
emotions and problems of the idle rich.
The book is outwardly cool, inwardly
unsettled—just like the ‘beautiful people’
Bravado works for,” says Darrigo.
An avowed indelRndent, who despised
unions and communism, Bravado now
finds himself exploring these deplored
possibilities as he is continually exposed
to the laissez-faire capitalism of those
who now surround him.

As writer/creator Dave Darrigo has
pointed out, there aren’t a lot of orig-
inal crime comics being published
these days. Tony Bravado is his effort
to expand the genre just a tad.
The first issue introduces us to this
ex-cop/ex-bodyguard turned trouble-
shooter. At the start of the series
Bravado works for Lance Palmer,
owner of the fabulous chain of Eden
Resorts and the publisher of Eden
Magazine (unlike Hugh Hefner’s now
defunct empire, Palmer’s highly
successful clubs and resorts provided
the base for the creation of the
magazine.

Considering the small potatoes
magnitude of the problem, it isn’t sur-
prising that Bravado sorts it out in a
hurry. Darrigo is setting up the series
here, and all we need is a glimpse of
the man at work to get the picture.
What’s more important is the way
Darrigo sets up our introduction to the
book’s lead character.

Darrigo has given Bravado tough-
ness and sensitivity in the right
measures. If there is any area where
the book is weak, it has to be the art.
Steve LeBlanc and LouiS Paradis
are not bad artists by any stretch, but
they don’t seem to have quite found
the handle on Tony Bravado. In some
parts, their work is detailed, in others
minimally so. They do some dark
stuff and some lightstuff, and not
always at the most appropriate times.
If they are attempting to artistically
enhance the contradictions of the char-
acter, it isn’t quite working. At least
not yet.
Still, there is an awful lot of
potential here. I suspect that as
LeBlanc and Paradis settle into the
character the book will become at
least a cult favorite.
Recommended with reservations.
GRADE: FINE 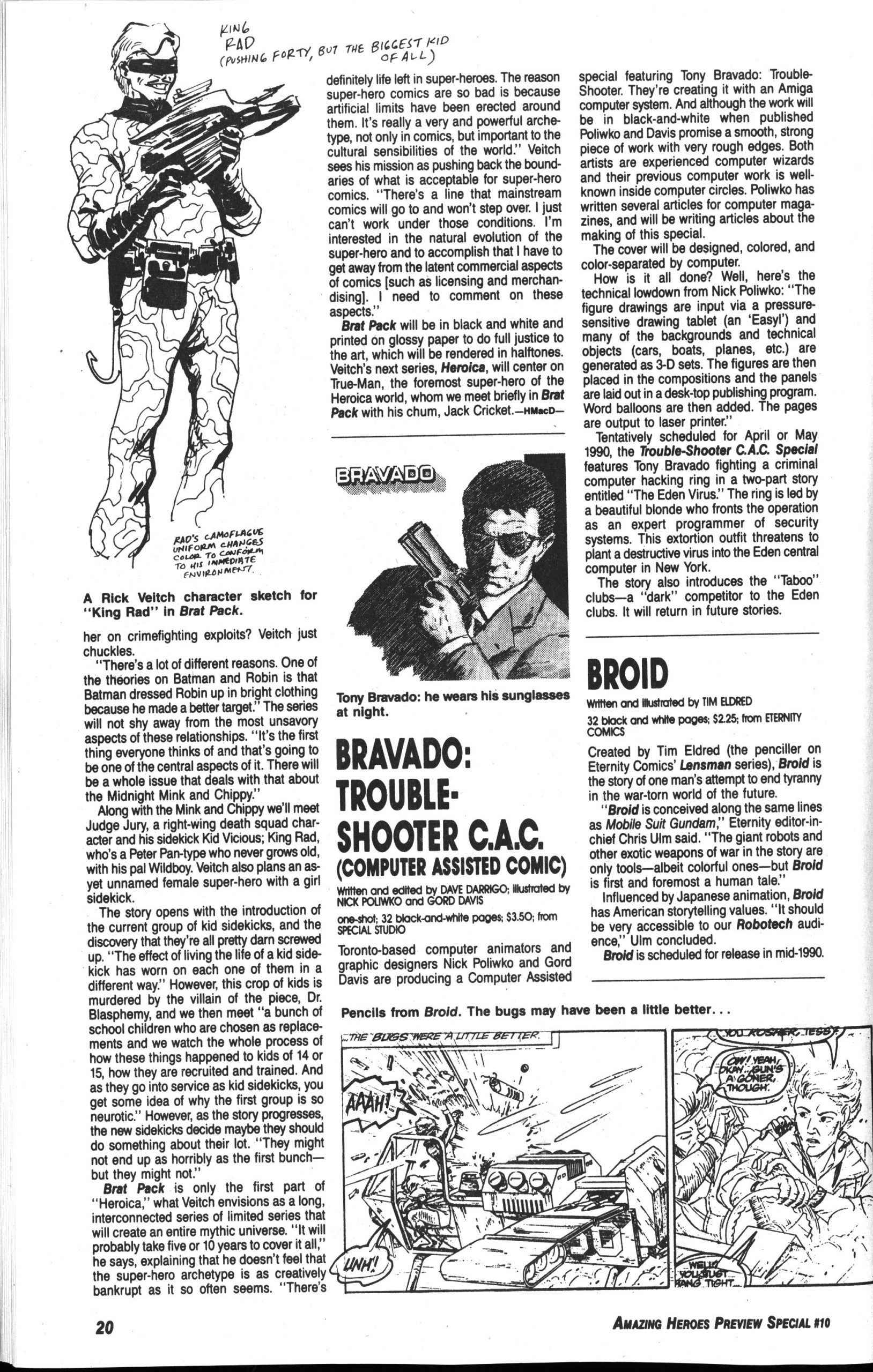 I’m not sure this comic ever appeared?

There isn’t much talk about the series on the web, but here’s something:

The concept behind the character and series was innovative and, frankly ripe with possibilities.

The series doesn’t seem to have been collected or reprinted.