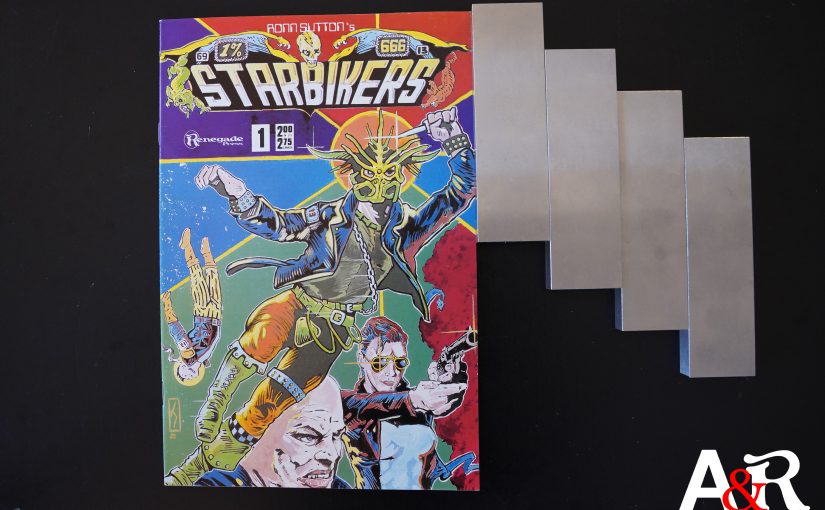 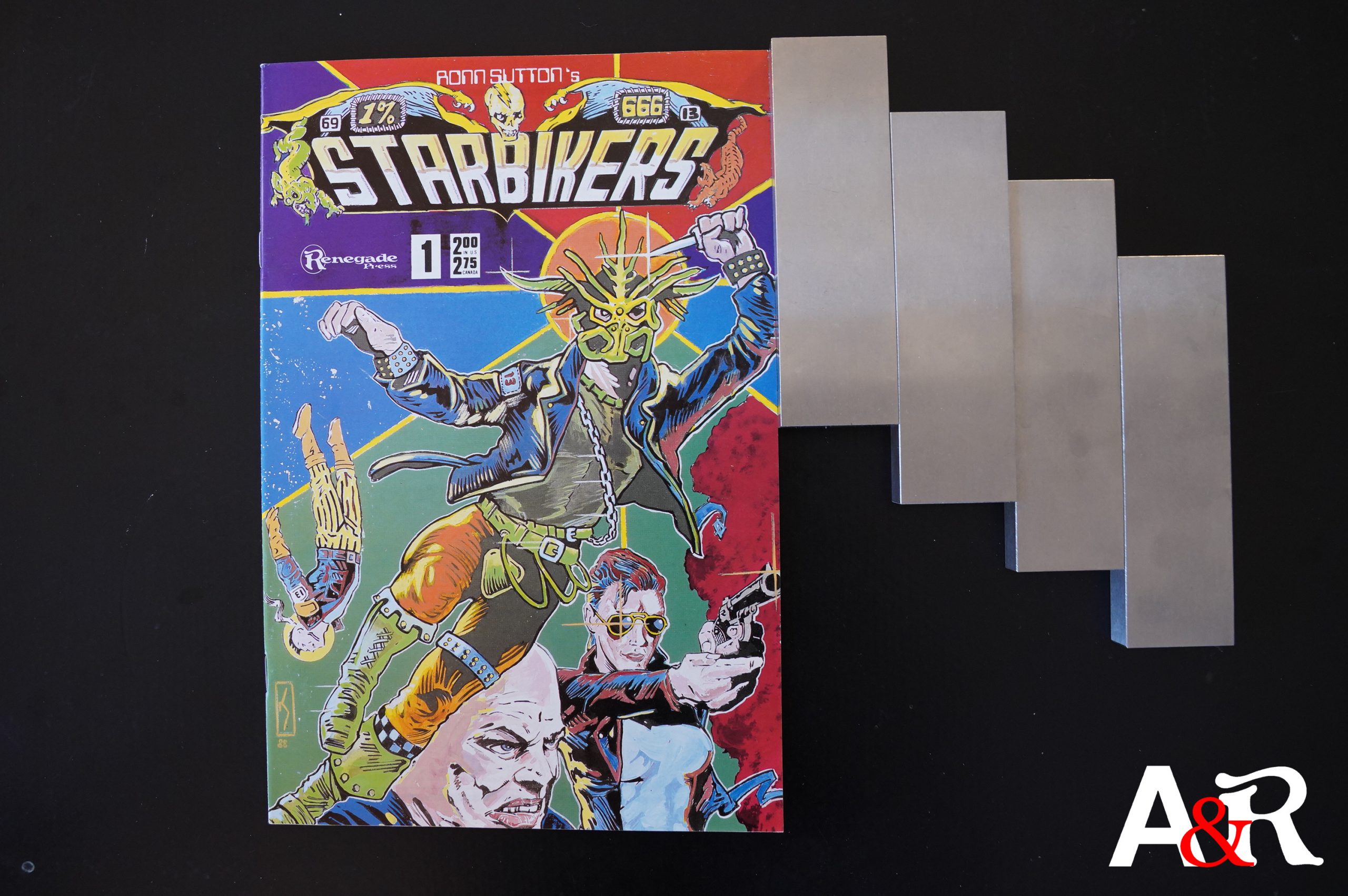 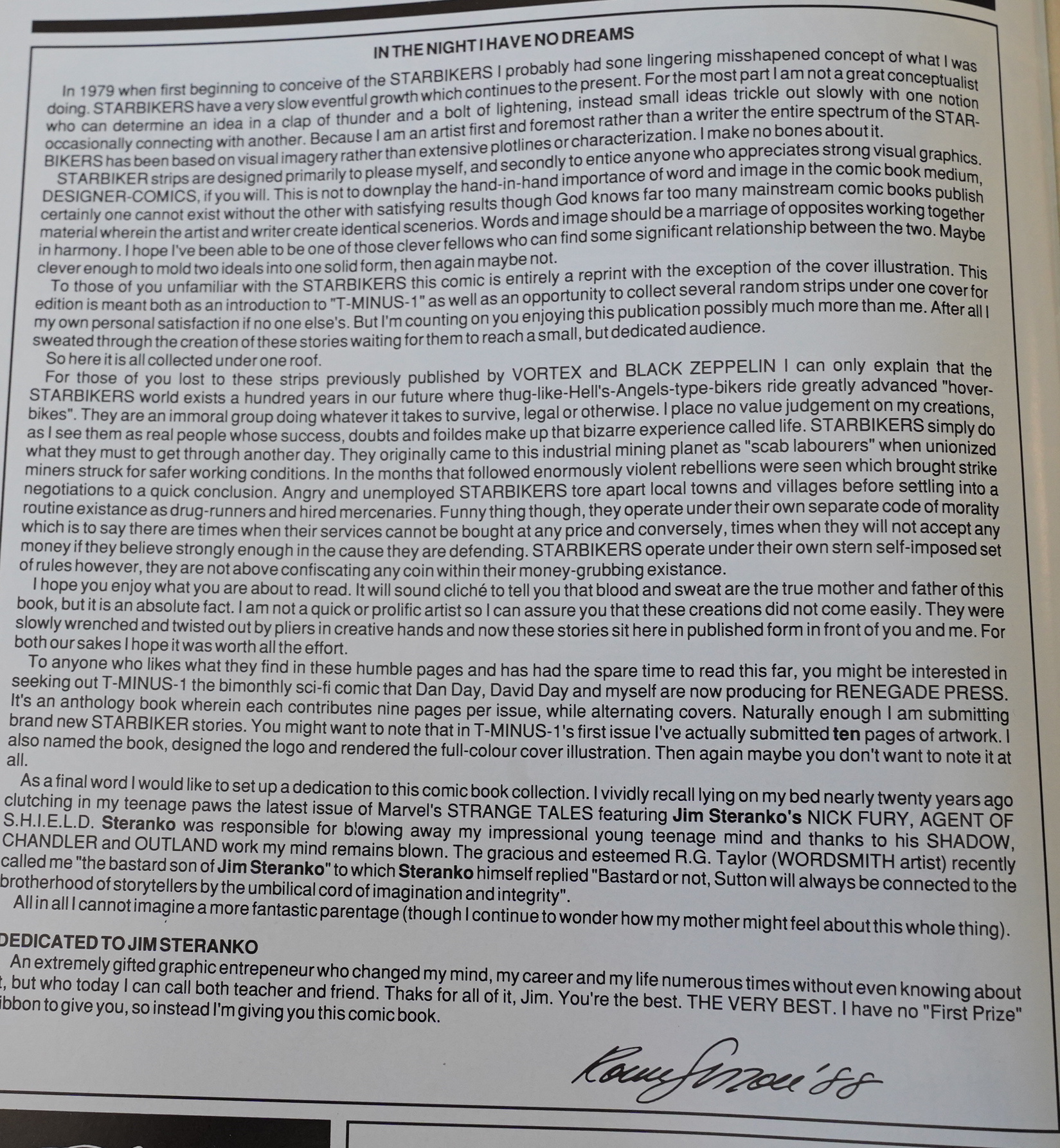 Sutton writes an introduction and explains what this comic is: It’s a reprint of Starbikers stories that had appeared in the Vortex and Black Zeppelin anthologies. The reason for this reprint is that they were launching a new ongoing title — T-Minus-1 — that had Starbikers as the lead feature. So that makes sense. 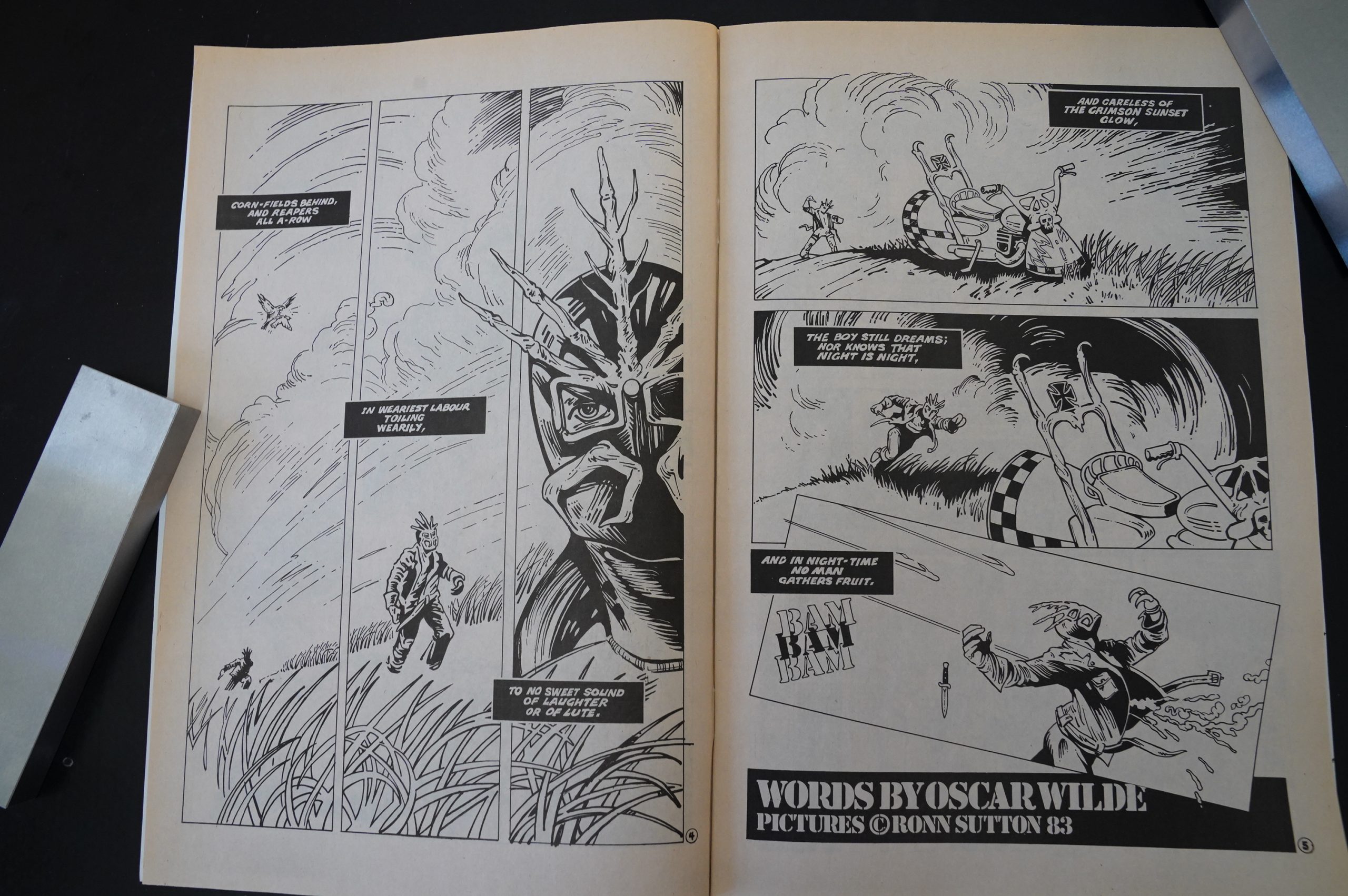 The stories themselves, on the other hand, are a pretty odd bunch. I’ve recently read the anthologies where these appeared, and they were pretty odd in that context, too… we start off, for instance, with an Oscar Wilde thing.

But with more guns. 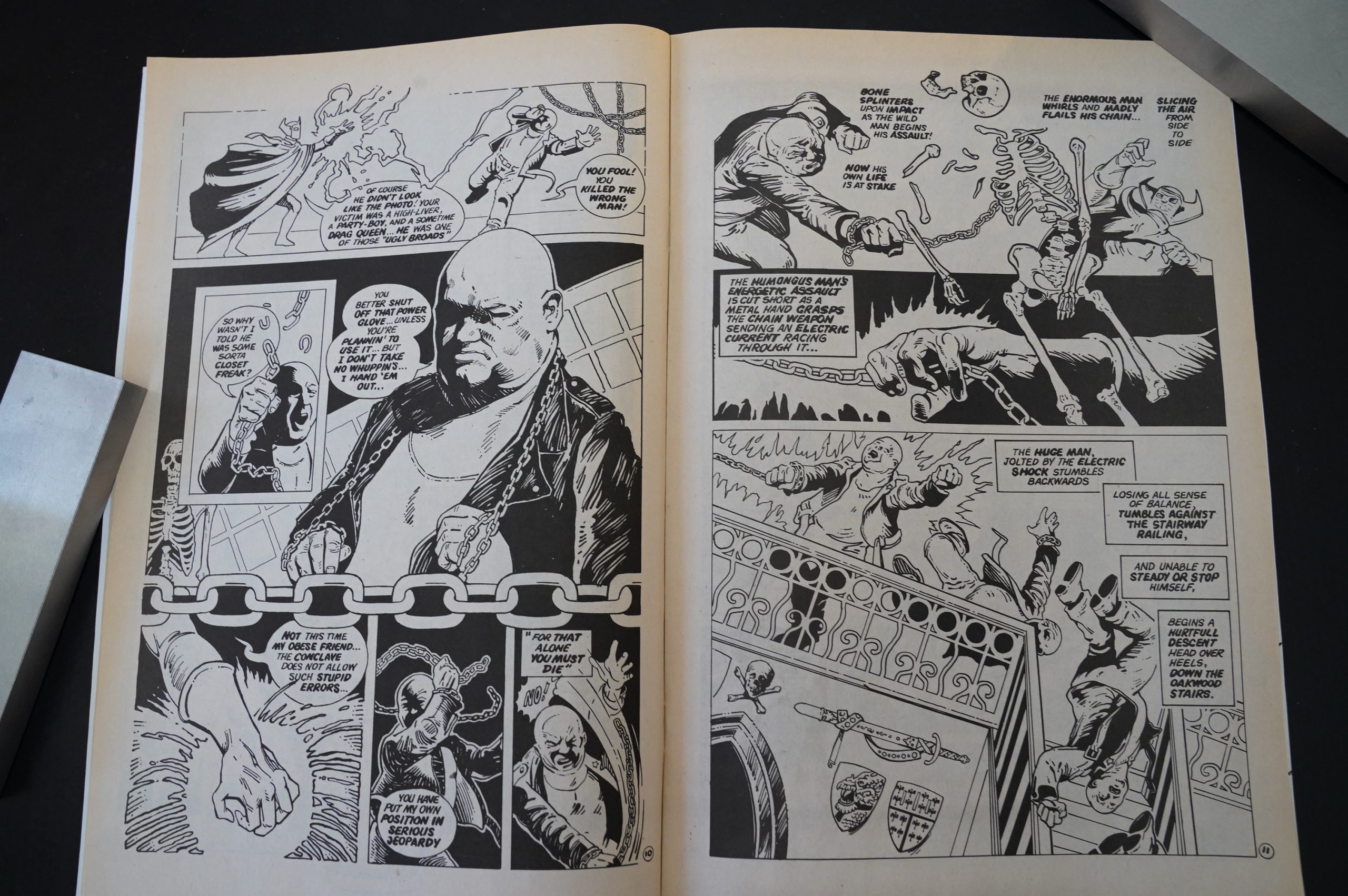 The second story seems to actually introduce us to a character that seems very similar to the one in T-Minus-1, so it’s probably the same guy? 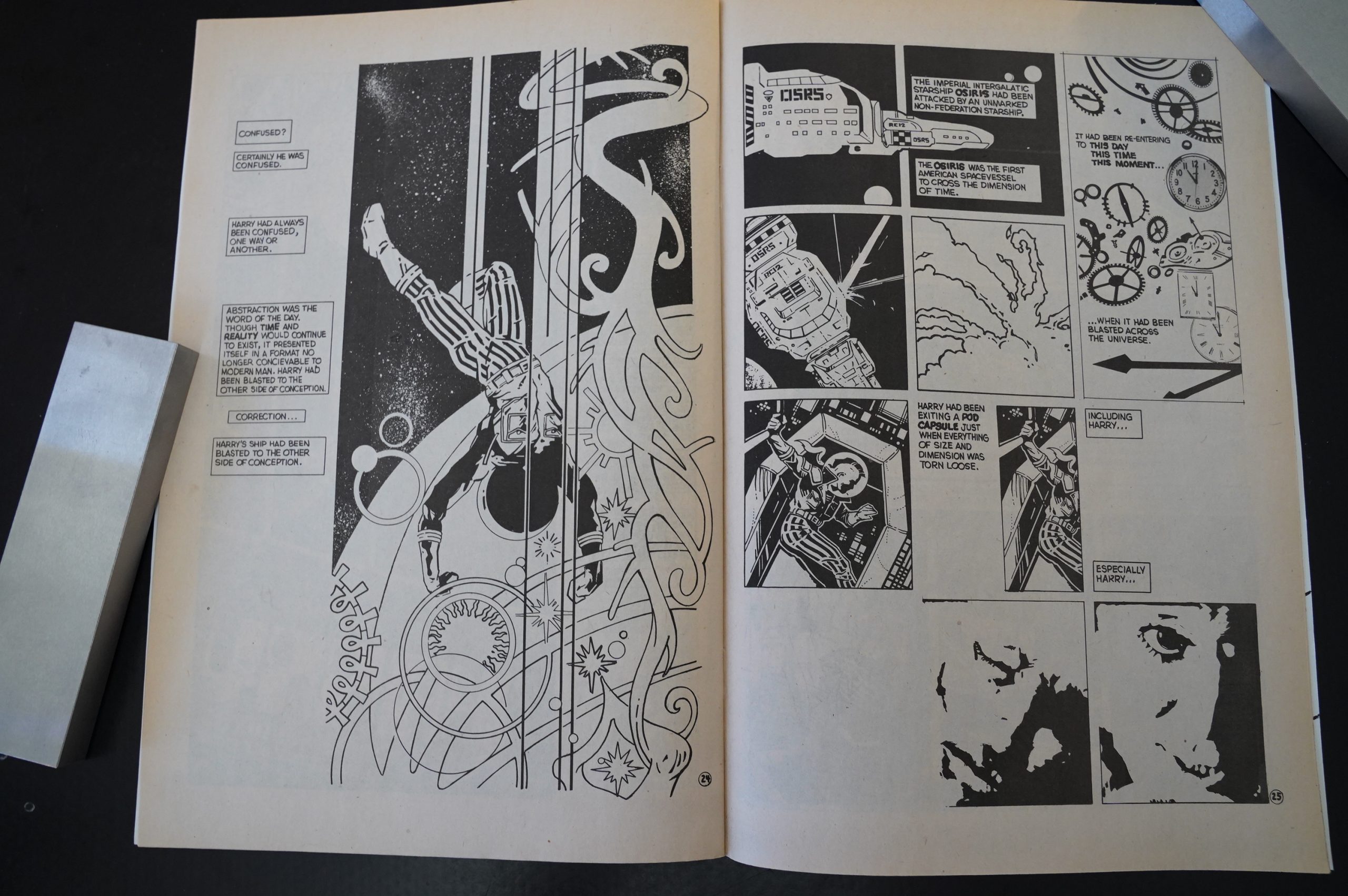 The final story is an O. Henry thing about time travel, and the relation to the other stories seems pretty tenuous.

All the stories have pretty impressive artwork, though — especially the fun layouts.

STARBIKERS
SPECIAL
Witten ard mustroted by RONN SUTTON
ore-shot; 40 black-arOttite $395; Wn
SPECIAL STUDIO
When Renegade’s T-Minus One S-F anthol-
ogy got clearance for Ron Sutton went
to work on producing new adventures of the
Starbikers, but only one issue got off the
ground.
Now, Ron’s ten pages for T combine with
17 new pages to make this special. There will
From Starblkers Speclal #1.
also be an additional eight page Starbikers
story and some pin-ups.
The special will introduce such characters
as Mainliner, Rock-a-Billy the Kid, Sorryboy,
and Teflon, and witl further explore the
mining planet turned hell-hole called Trench-
world.
All stories in this special will be complete
and all plotlines resolved, and Sutton even
promises a four page spread!

STARBIKERS
Starbikers is a collection of vignettes
published by Vortex and Black
Zeppelin. The basic premise is Hell’s
Angels of the future.
These future-bikers ride hover-
cycles and pretty much do as they
please. They sell dope, hire out as
mercenaries and generally do what-
ever. it takes to survive, legal or
otherwise.
Because Ronn Sutton is, admittedly,
an artist first anda writer second,
Starbikers is a very visual book.
Sutton has a striking, very lean style
that seems more angular than fluid.
Although he cites Steranko as his
major influence and source of initial
inspiration, there are hints of
Infantino, Colon and other artists
whose angular styles have had an im-
pact on North American comics.
Steranko’s influence is most keenly
felt in the layouts. Sutton’s layouts, like
Steranko’s, are anything but mundane.
Size, shape and sequence of panels
vary from page to page. Unlike a num-
ber of would-be comics artists, the
variety in Sutton’s layouts does not
make it hard to follow the story. This
is, perhaps, Sutton’s greatest strength
as an artist: the reader’s eye is drawn
through the story in the desired
sequence.
As a writer, Sutton does leave a bit
to be desired. His dialogue is stilted
and his captions tend to be a bit florid.
Still, he shows a real grasp of the
storyteller’s an in the way his script
and art complement each other rather
than repeat each other. His captions
are not limited to merely listing or
itemizing the contents of the panel.
His dialogue is not limited to the sim-
ple affirmation of what appears before
the reader.
While it is otwious that Ronn Sutton
has imagination and wit and style—it
is also obvious that the stories con-
tained in Starbikers are from a time
when he was defining his personal
style.
Starbikers is a brief overview of
Sutton’s improvement as a creator
from 1983 to 1985.
As such it is interesting, entertaining
and not quite like anything else I’ve
ever read.
If you haven’t read the earlier incar-
nations of these Starbikers stories, I
can, with some slight reservations,
recommend this book. Be prepared
for a work-in-progress. Be prepared
for some awkwardness. Most of all,
be prepared for something just a bit
different.
GRADE: FINE

Here’s a review from the intertubes:

I like that each of the four stories is a little different: The first and last are artsy and prosey, like illustrated short stories, while the middle two are easier to follow, more straightforward and actiony. But I just didn’t care for any of the characters, and the stories were too short and seemed to lack purpose. Like New Ruins for Old – sucks that the bikers’ situation got worse, but…so what?

As far as I can tell, the Starbikers stuff has never been reprinted, but it looks like it was continued in a Caliber anthology?