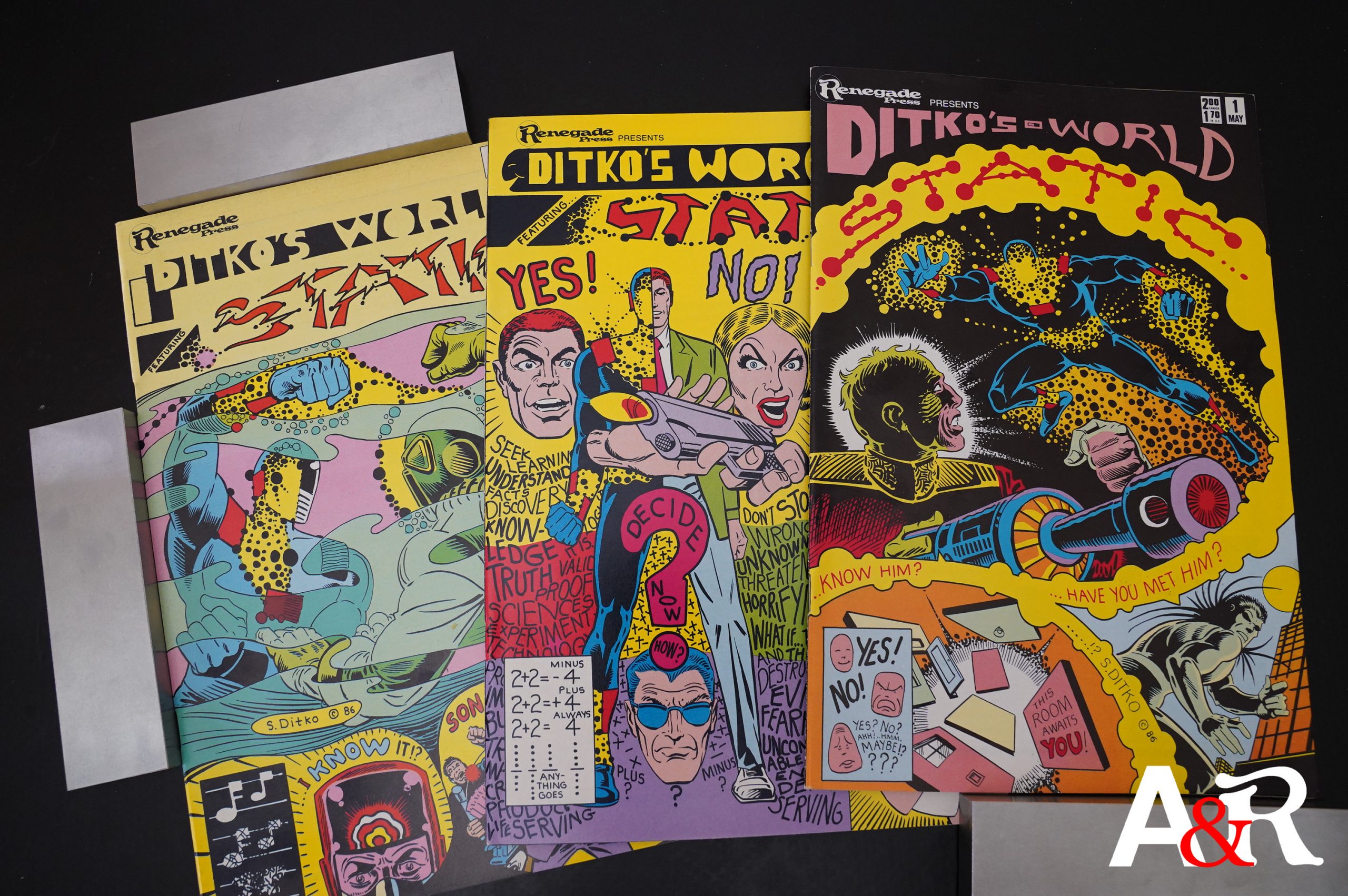 This series is sometimes referred to as Revolver #7-9 — Robin Snyder was putting together a monthly series of Ditko stuff at Renegade, but varying the title. And here they’ve kinda-sorta ditched the “Revolver” title, which is probably a good idea, since anthologies don’t sell.

Let’s read the first few pages of this series: 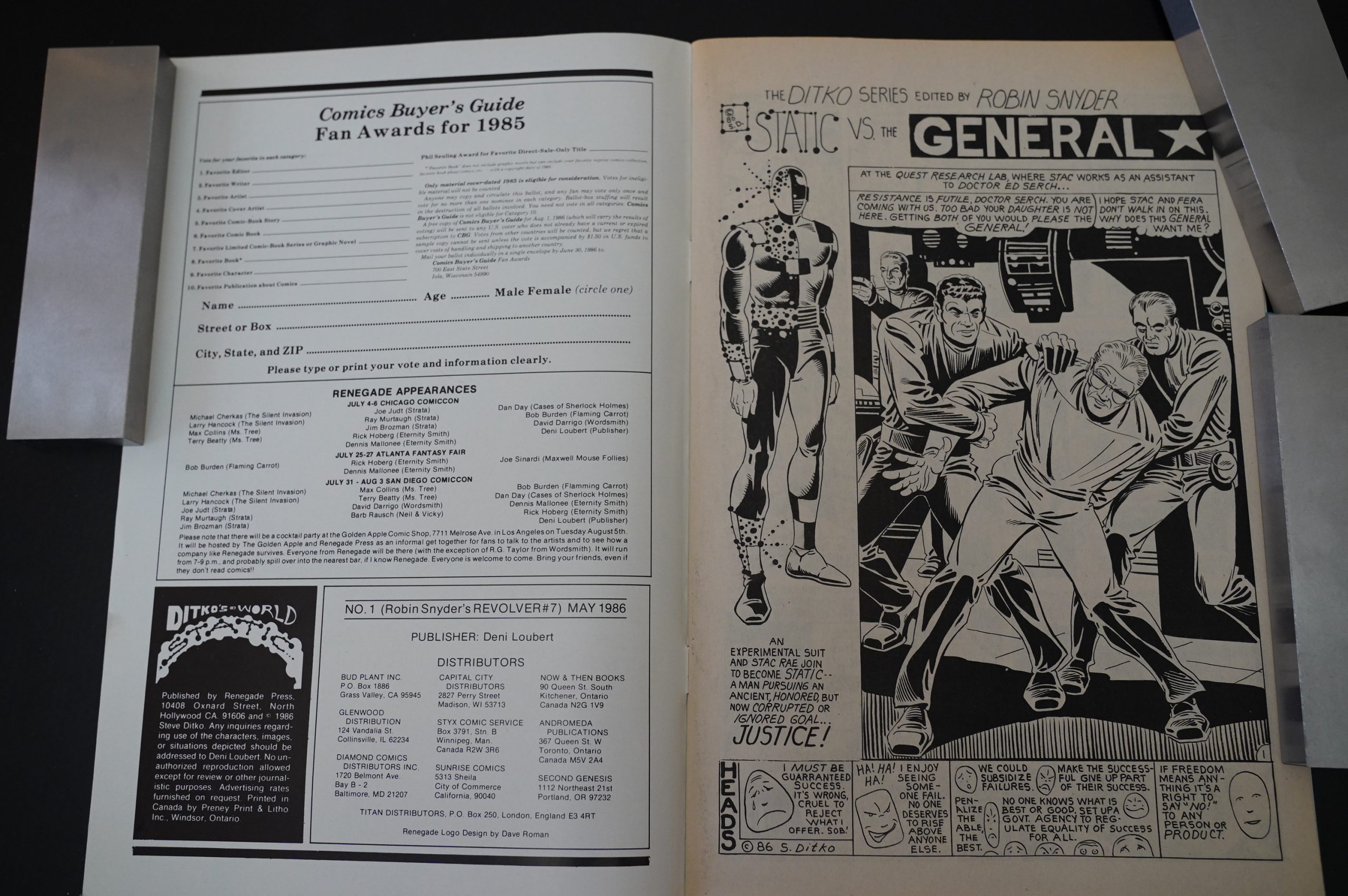 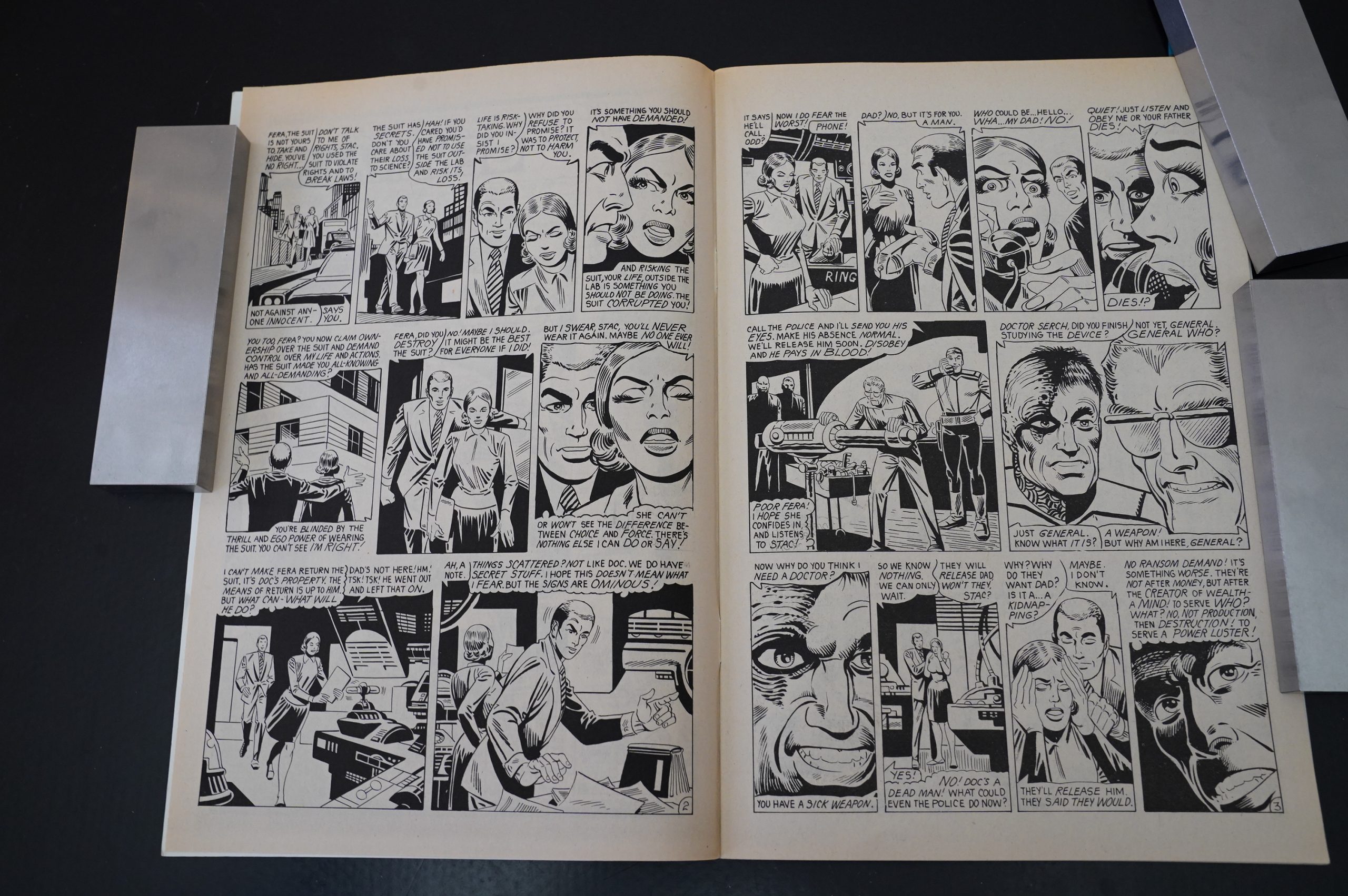 So this series is about Static, the character Ditko had been doing at Charlton Comics for quite a while, I think? I remember having at least one issue of the Charlton Static as a teenager…

Oh! I was wrong: There were only two Static issues before this, and Charlton then went bankrupt. (These two things are probably not cause and effect.)

There’s only one ten-page Static strip per issue here, though. 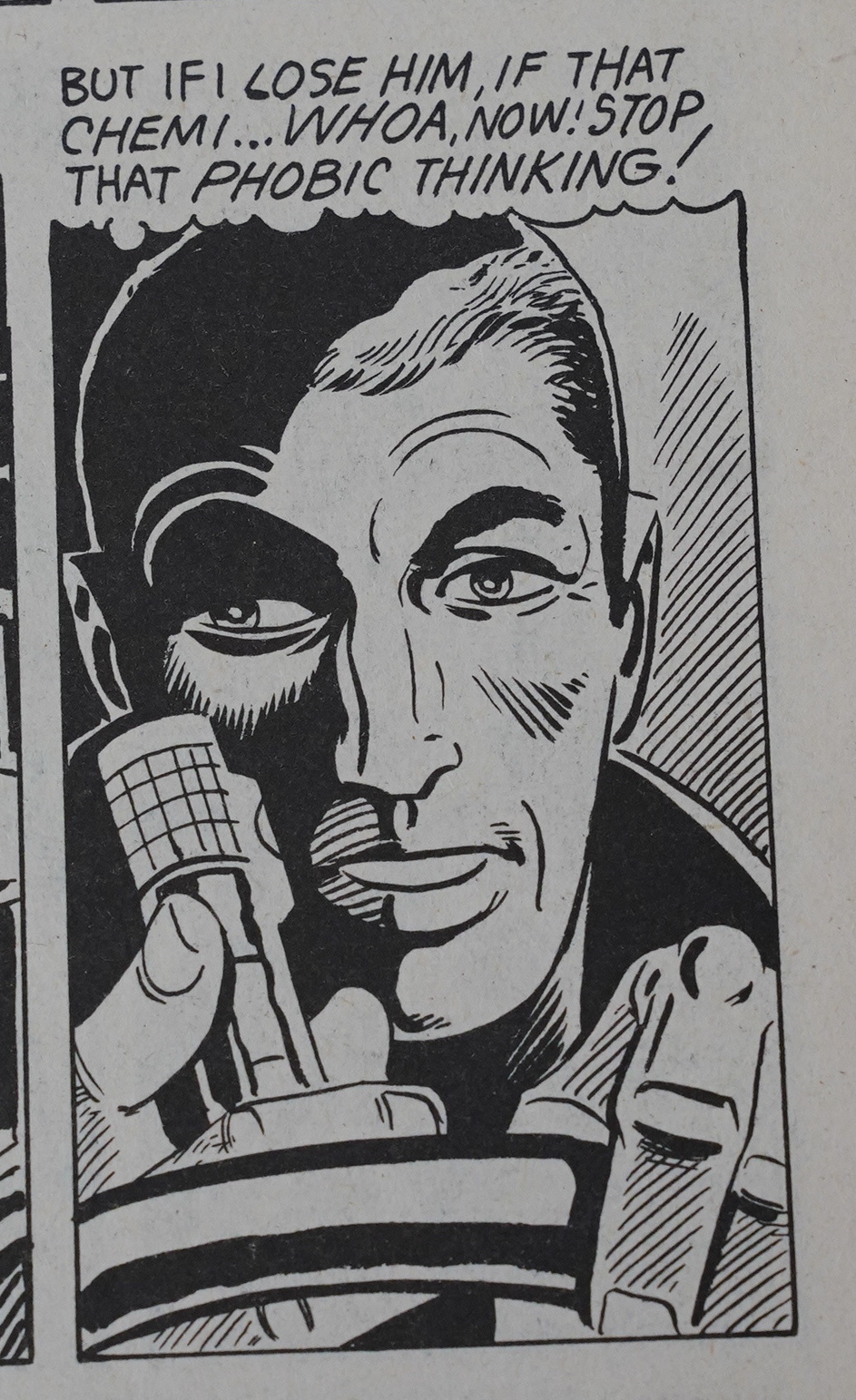 Are the evil ones the only ones that curse in Ditko? 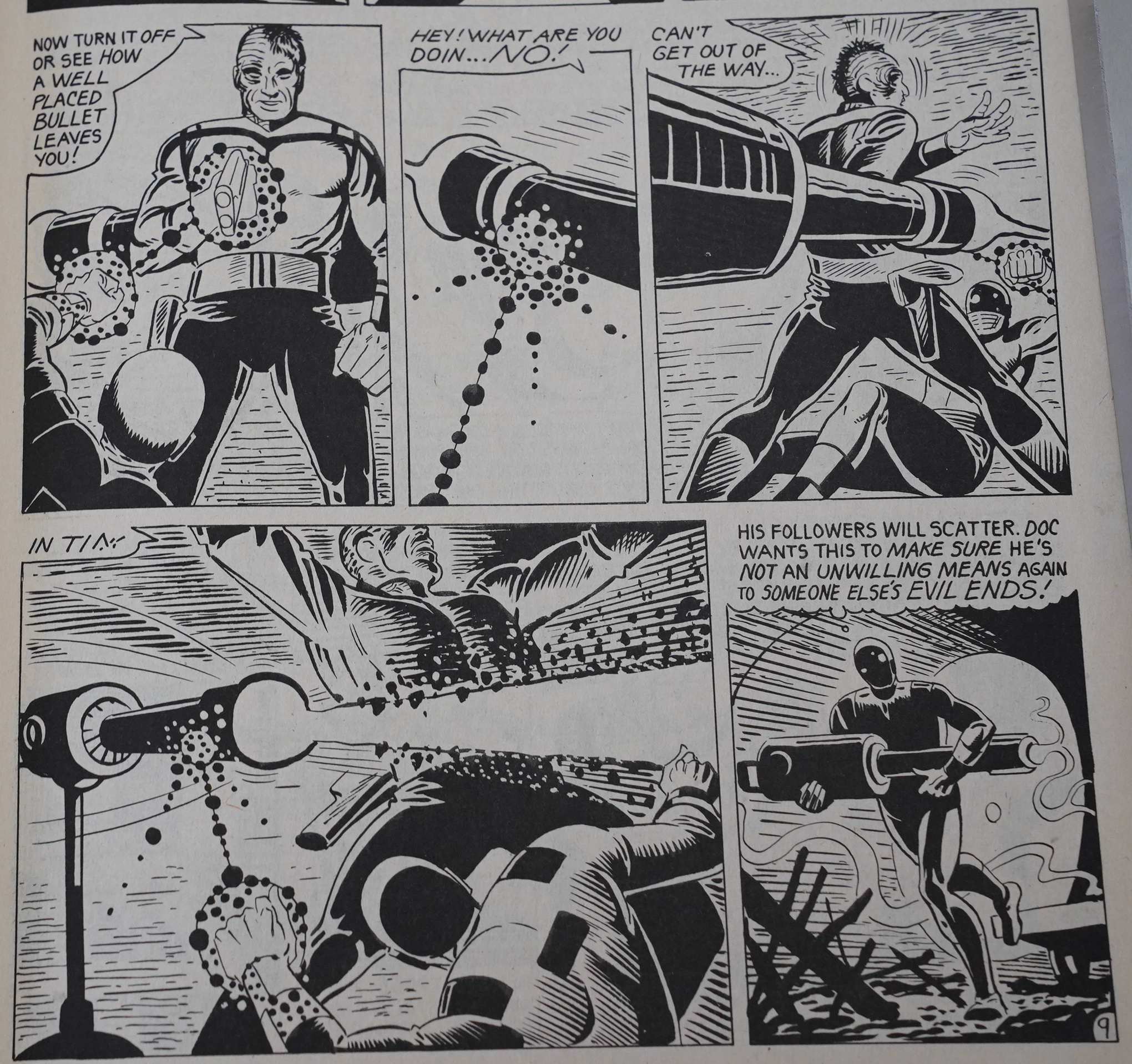 Anyway, Static is a super-hero, and Ditko seems like he has long range plans for him: We get a proper supporting cast (who are conflicted, to say the least, about whether super-hero stuff is ethically good), and a certain character development over these three stories. (Which is somewhat unusual for Ditko.) 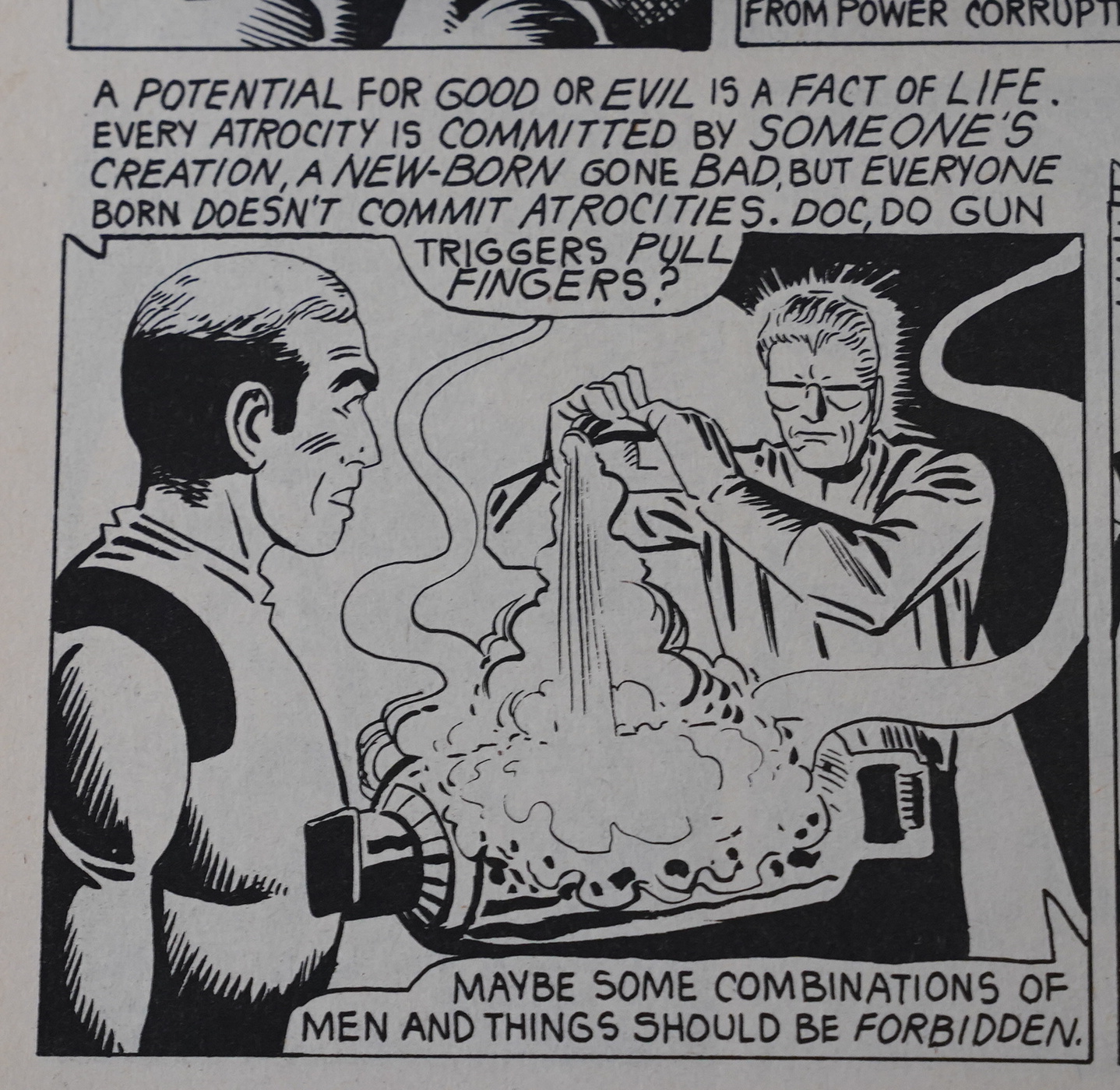 I think Ditko is trying to say that he’s pro NRA. 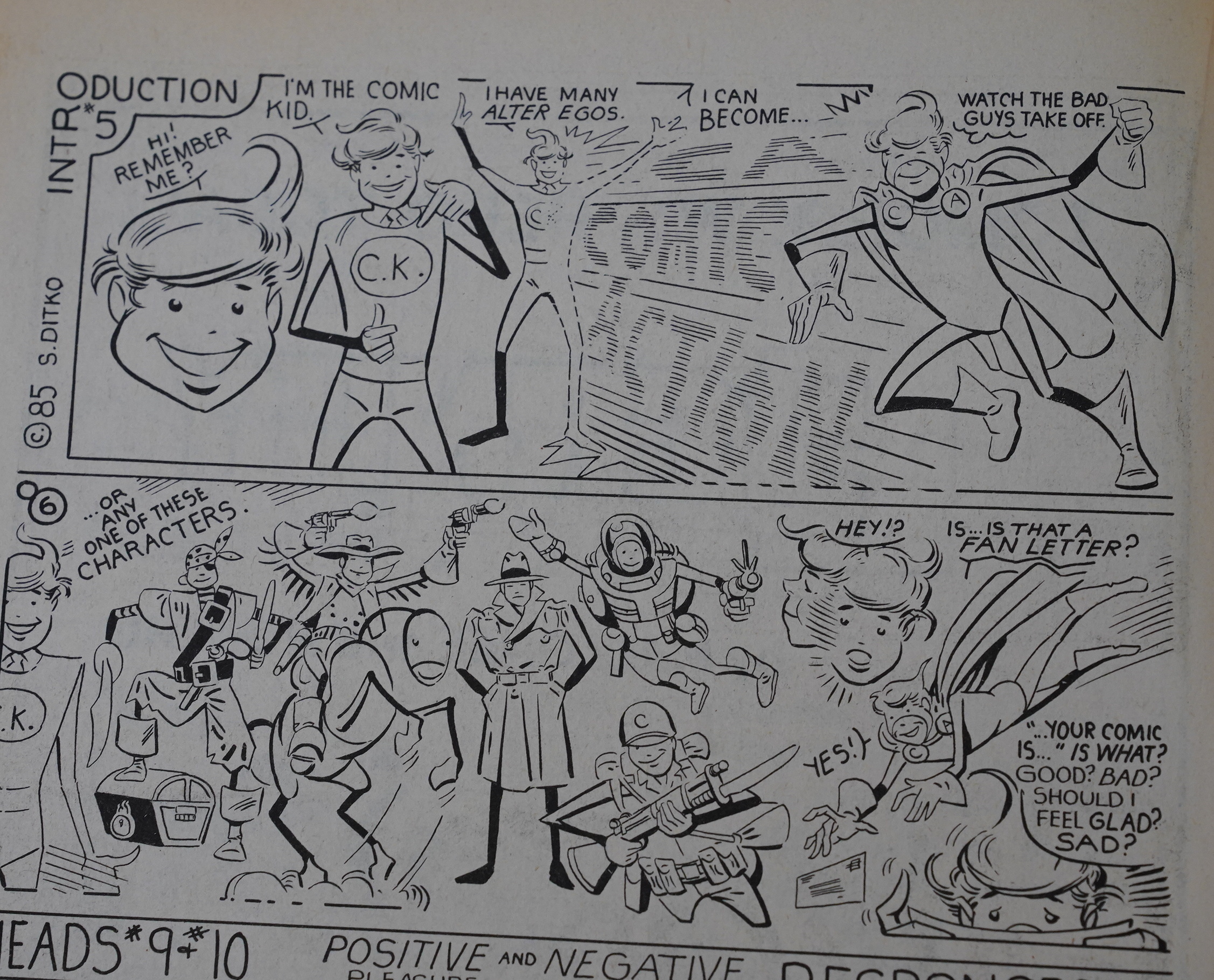 And conflicted about fan letters. 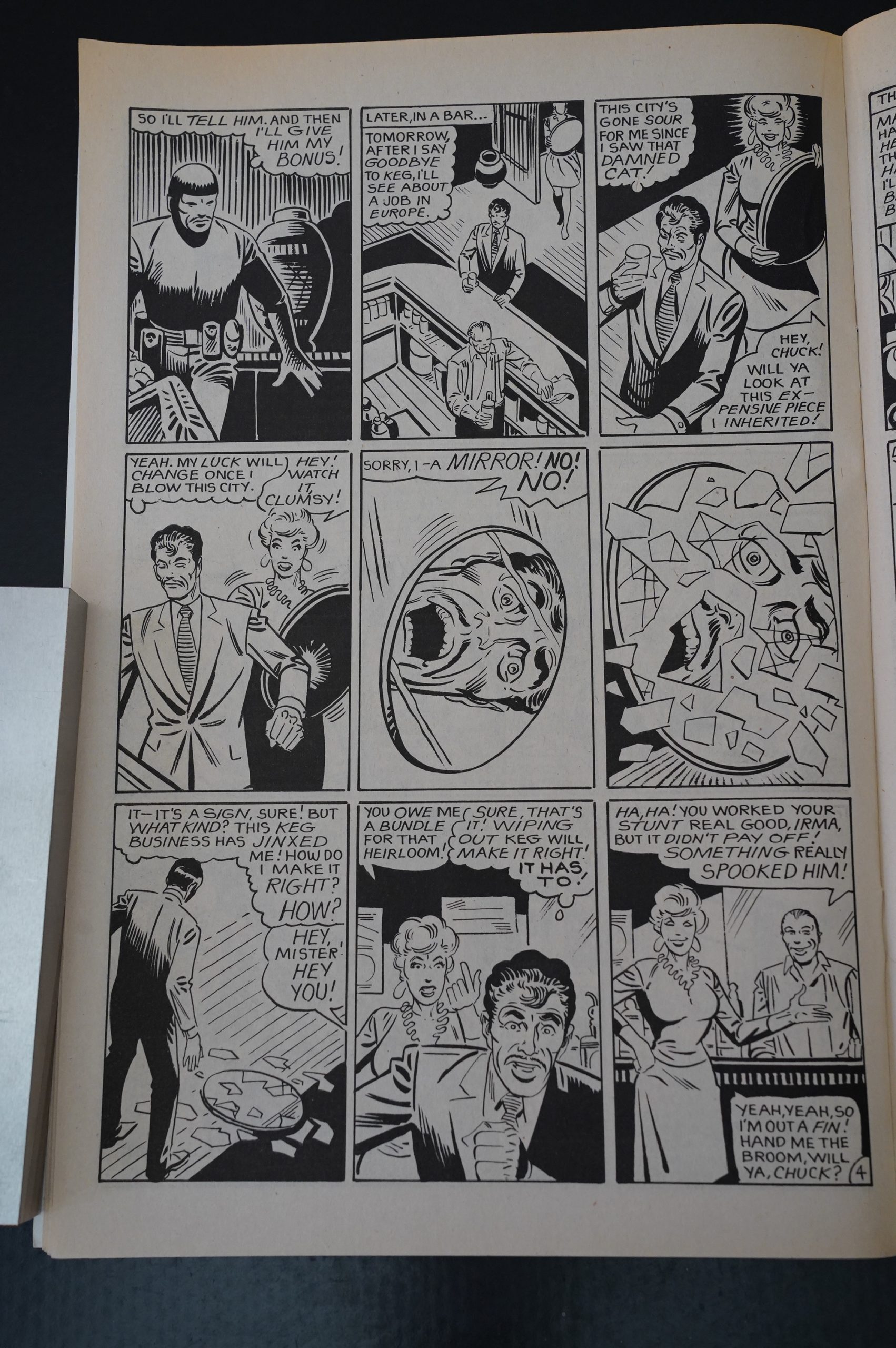 Since there’s only ten pages of Static per issue, we get a lot of other Ditko stuff, and it’s really weird stuff. Even for Ditko. 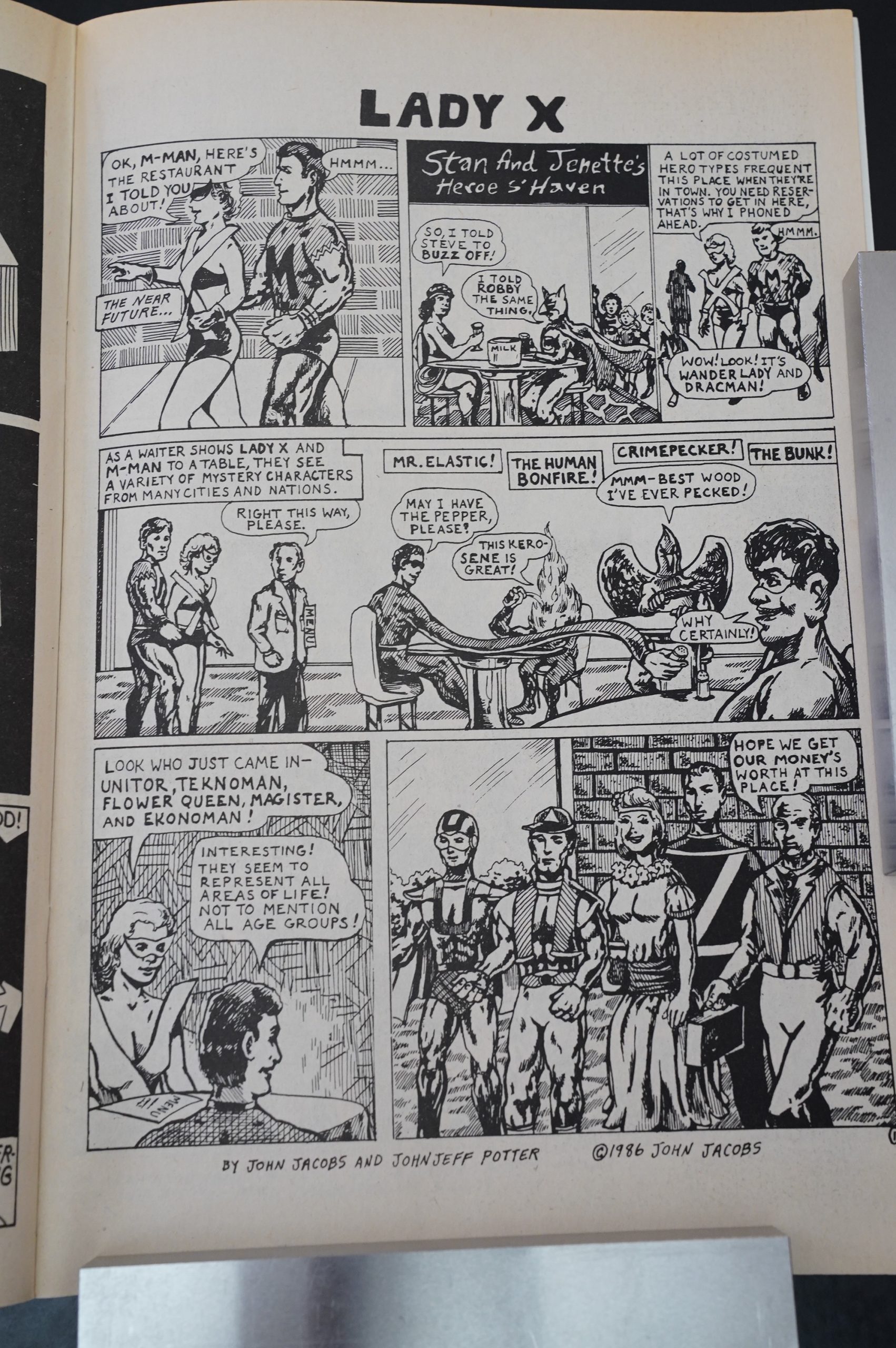 There’s only three pages of non-Ditko stuff in here, fortunately. Unfortunately those three pages are… this. I assume that the creators are teenagers, but what’s the story behind these three pages being printed here? 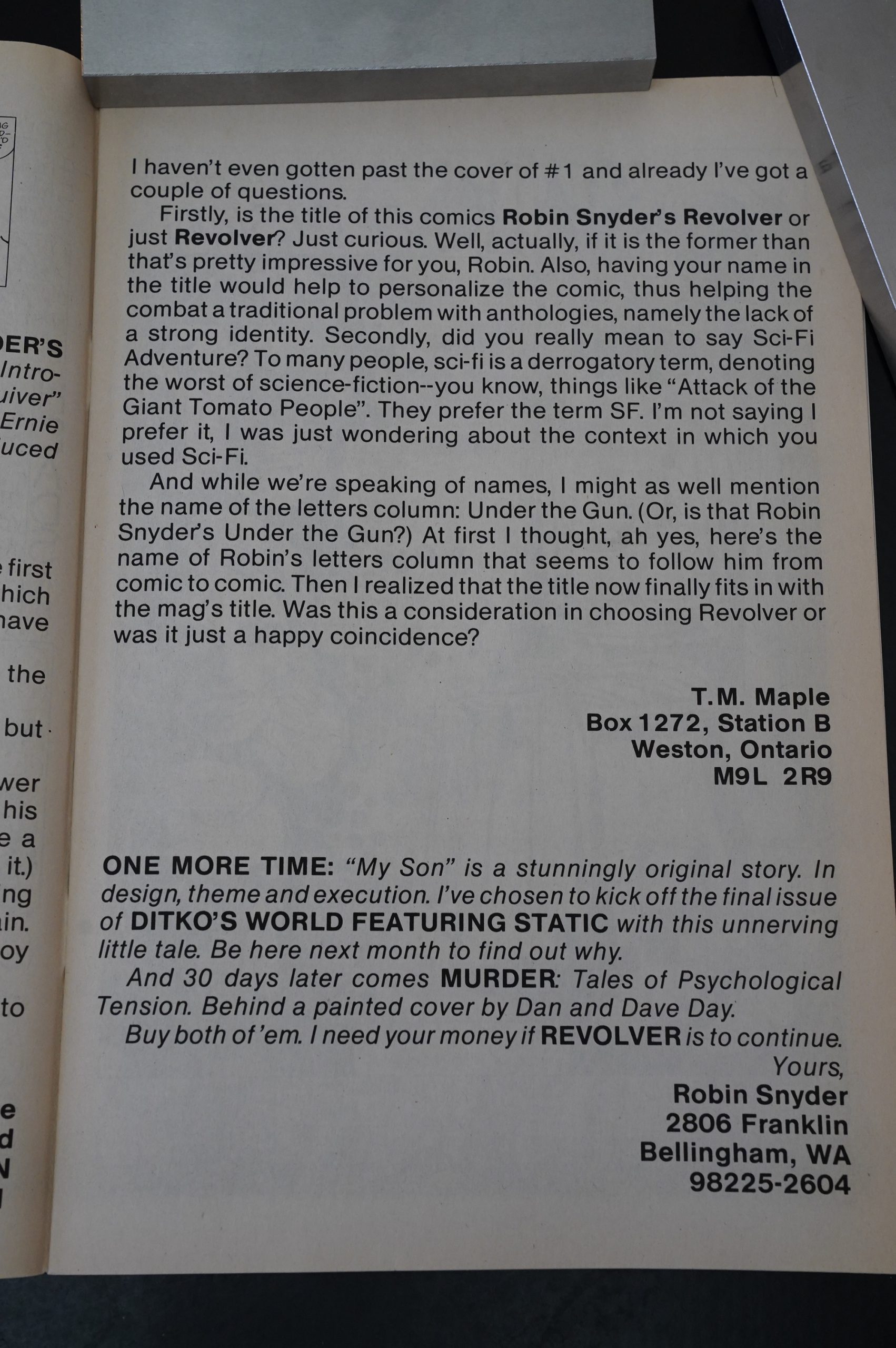 T. M. Maple asks all the hard questions. And Snyder asks for our money. 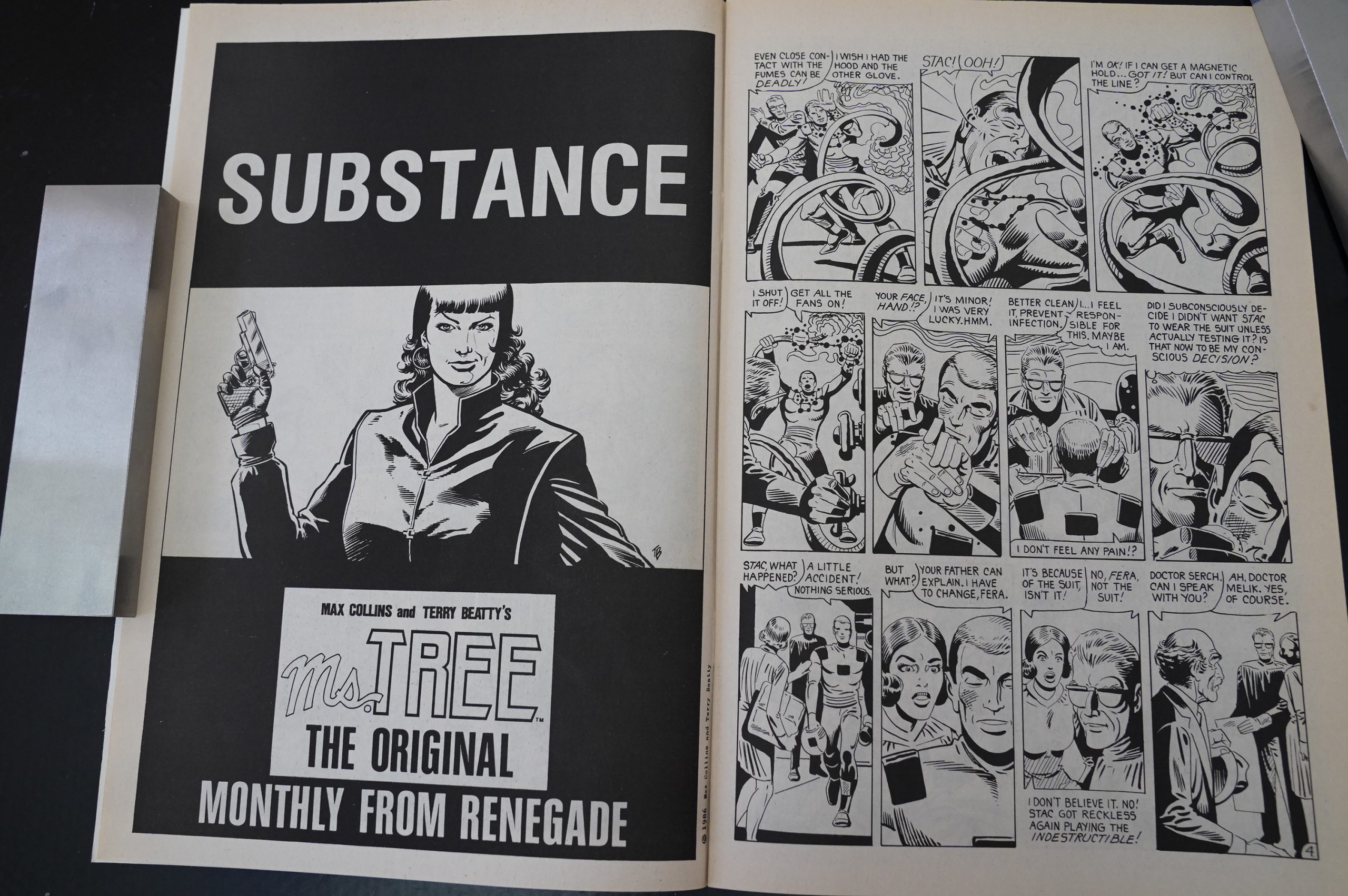 There seems to be a missing page in the second Static story? Instead of the third page, we get this ad? The previous page is numbered “2” by Ditko, and then we get “4”, and this page starts rather abruptly… So was that a printing error? Ditko decided to ditch a page at the last moment? 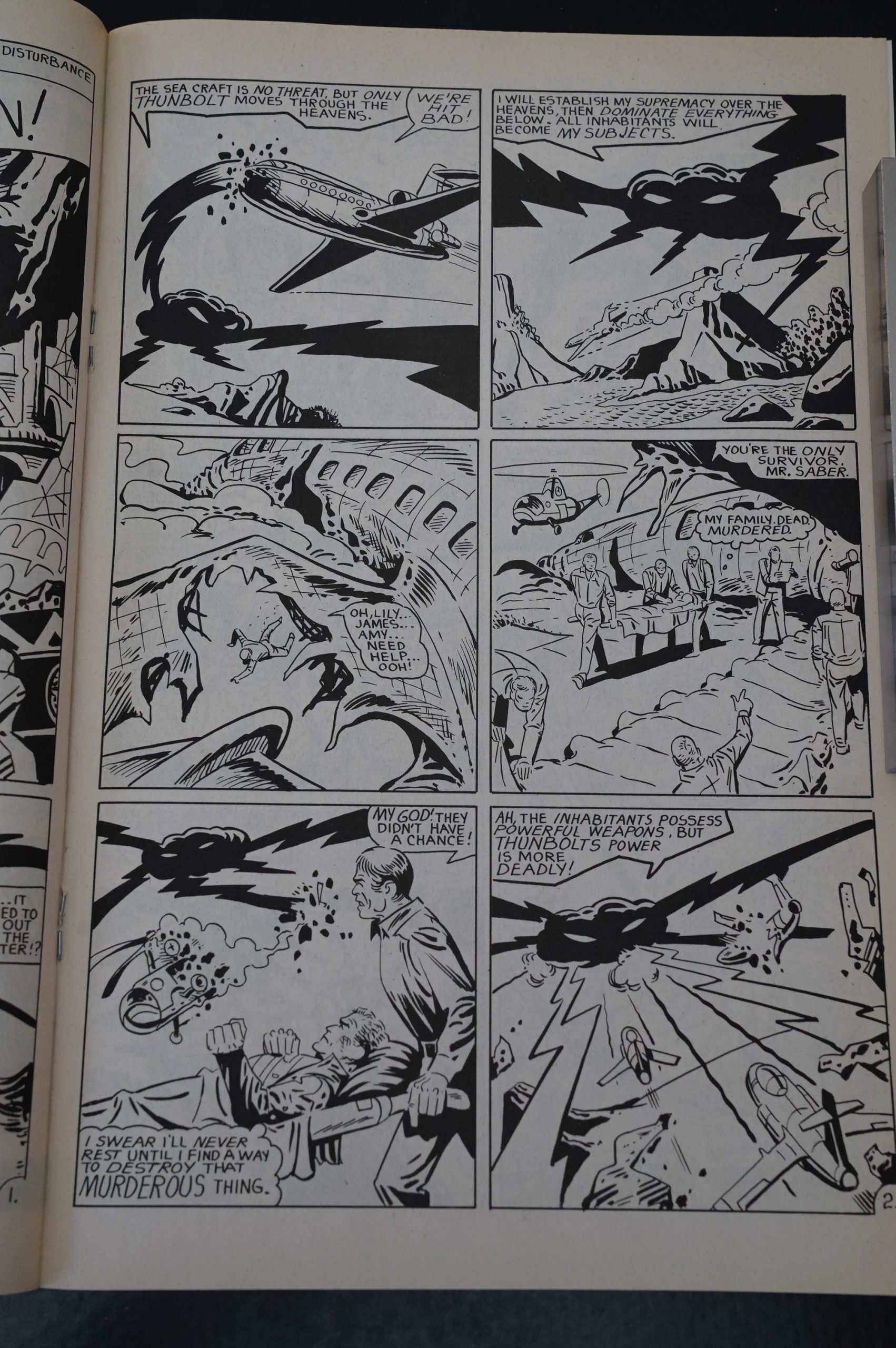 I alluded to the non-Static stories being… odd… so here we get a story about a living, evil thunderbolt. You have to admit that that’s pretty odd. 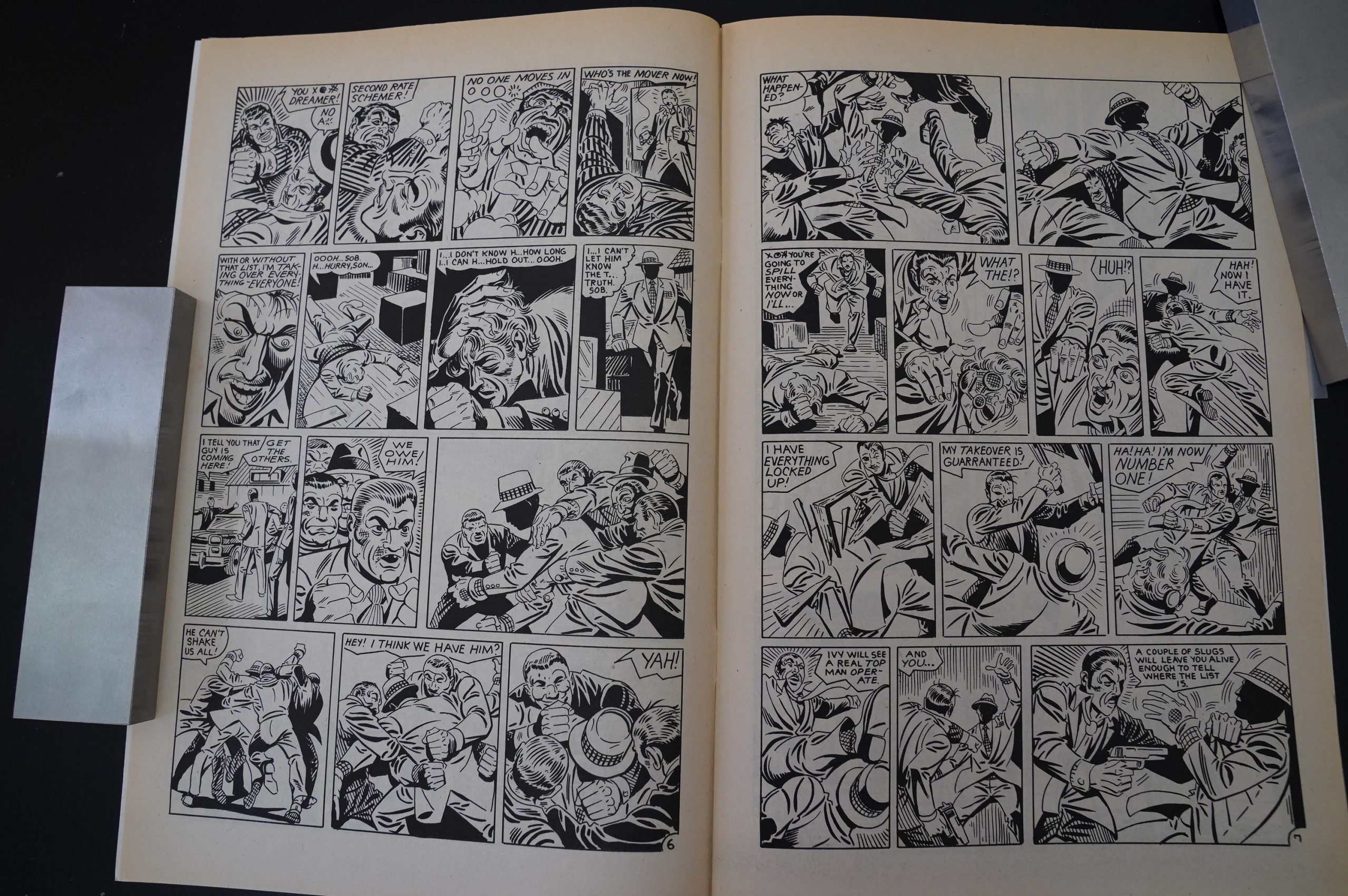 I have absolutely no idea what the plot of this story was, for instance, but it was kinda moving, anyway. And the fight scenes are pretty entertaining. 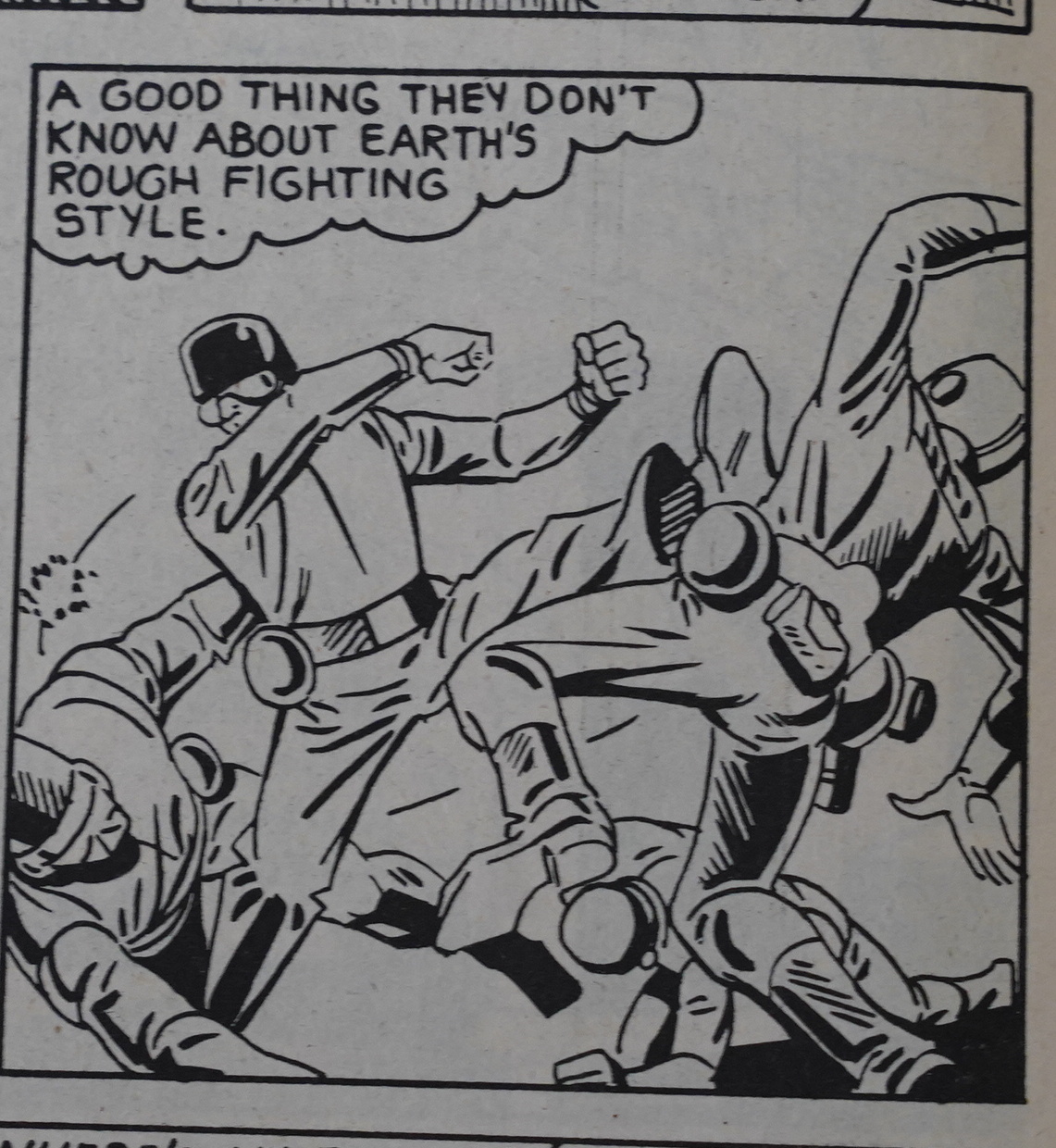 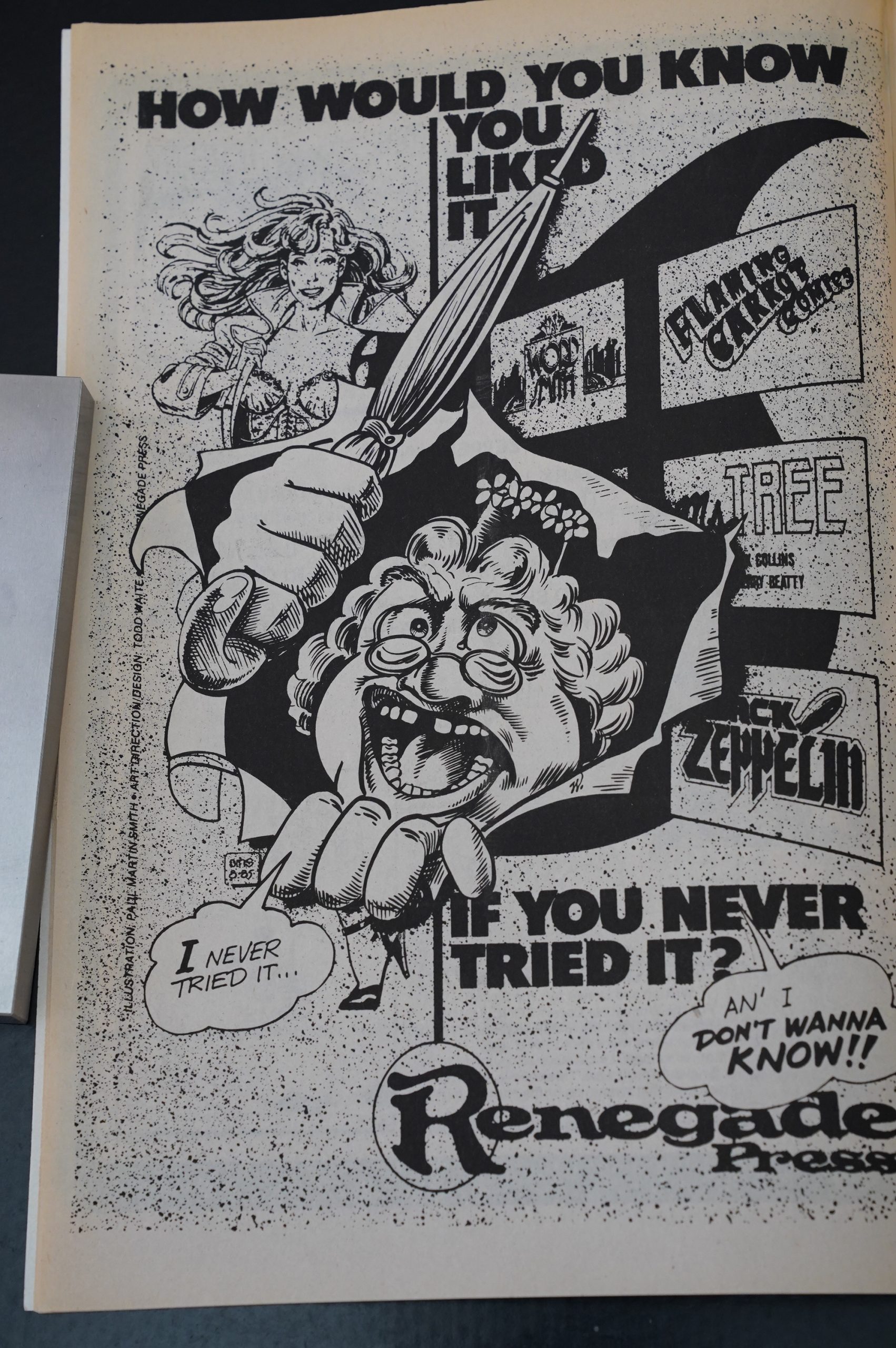 Heh. I haven’t seen that version of the Renegade ad before… 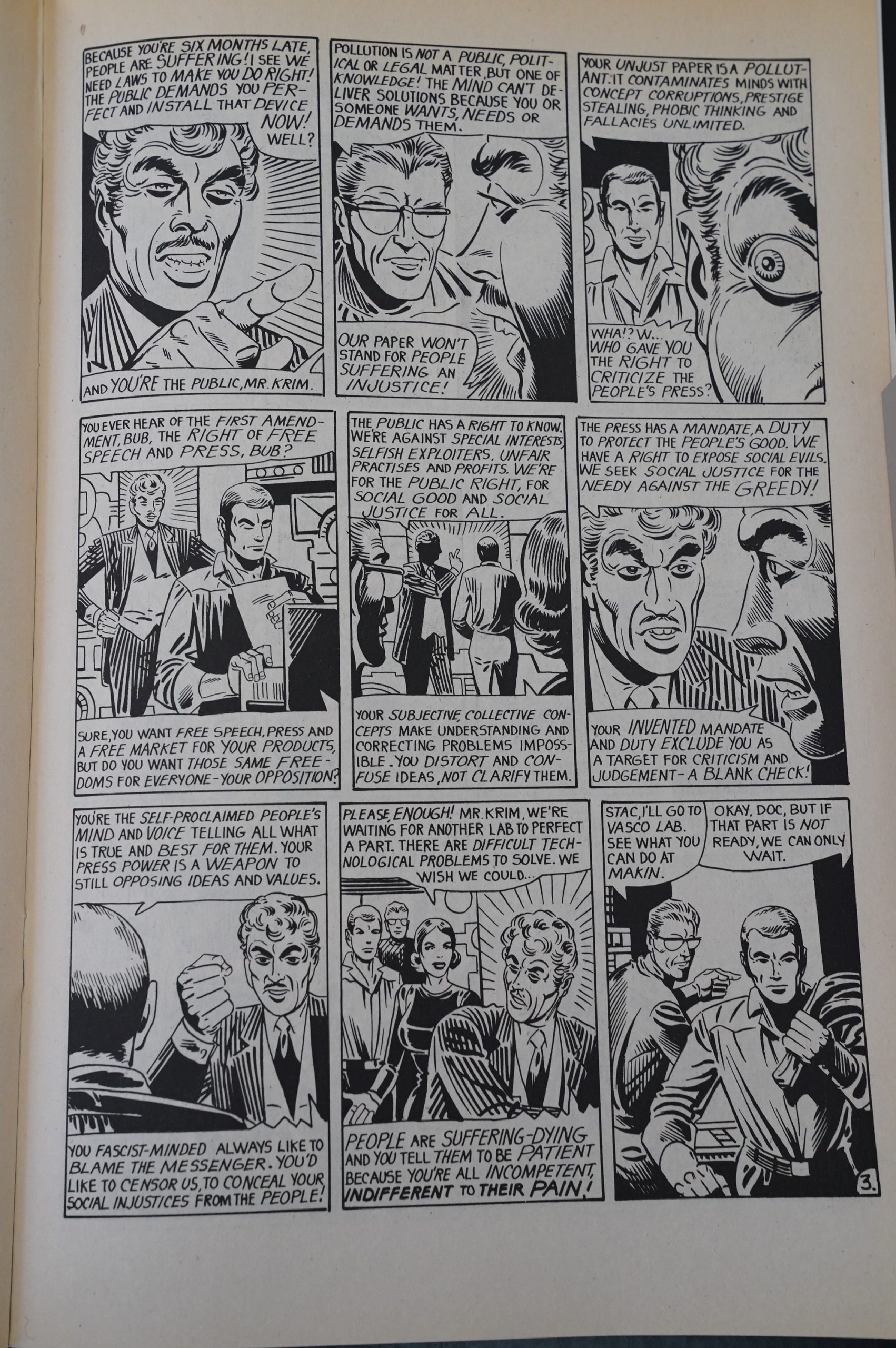 Ditko takes on the press. It turns out that the press are poopy-heads.

Anyway, that’s it. As you may have guessed, I’m not really a Ditko fan, but these stories seem better than most Ditko stories I’ve read? I.e., they’re somewhat entertaining, and it’s not just Ditko venting about whatever he’s mad about this particular morning.

A couple Of mini-series deserve comment.
The first of three issues of Ditko’s World
(actually the seventh issue Of Revoler) is out.
Static is featured. As usual with Ditko’s cur-
rent work, the stories are goofy, the art is
stilted in dialogue, brilliant in action, and
the proper names are funnier than anything
in Maxwell Mouse. Does Ditko actually com-
pose names like Zac Ager and Stac Rae, or
will any random sequence of letters do?
Would he actually want to watch a TV show
hosted by somebody named Bunny Boo?
Maybe he means Bunny Boo to be satirical,
but it’s hard to be sure in a story where the
straight characters are named Nepper and
Mell Mussy. Oh well.
Ditko’s World also contains a three-pager
from John Jacobs of Dr. Peculiar fame.
Jacobs is the Edward D Wood, Jr., of the
super-hero comic. This piece is too short to
give the full flavor of his oddly evocative
ineptitude, but here’s hoping Renegade can
provide him with the space to stretch out
in the future.

I think most of the pieces in these issues have been reprinted in other Snyder/Ditko books, but not for a couple of decades, apparently.

I was unable to find any reviews of this series on the intertubes.