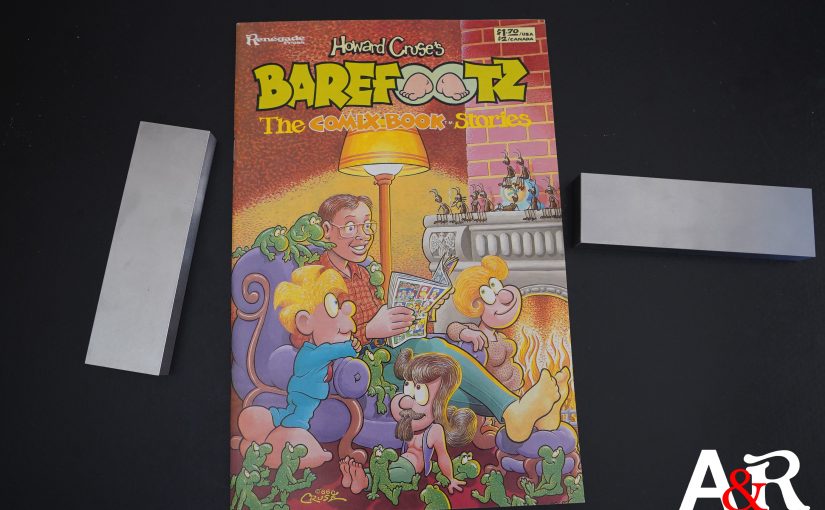 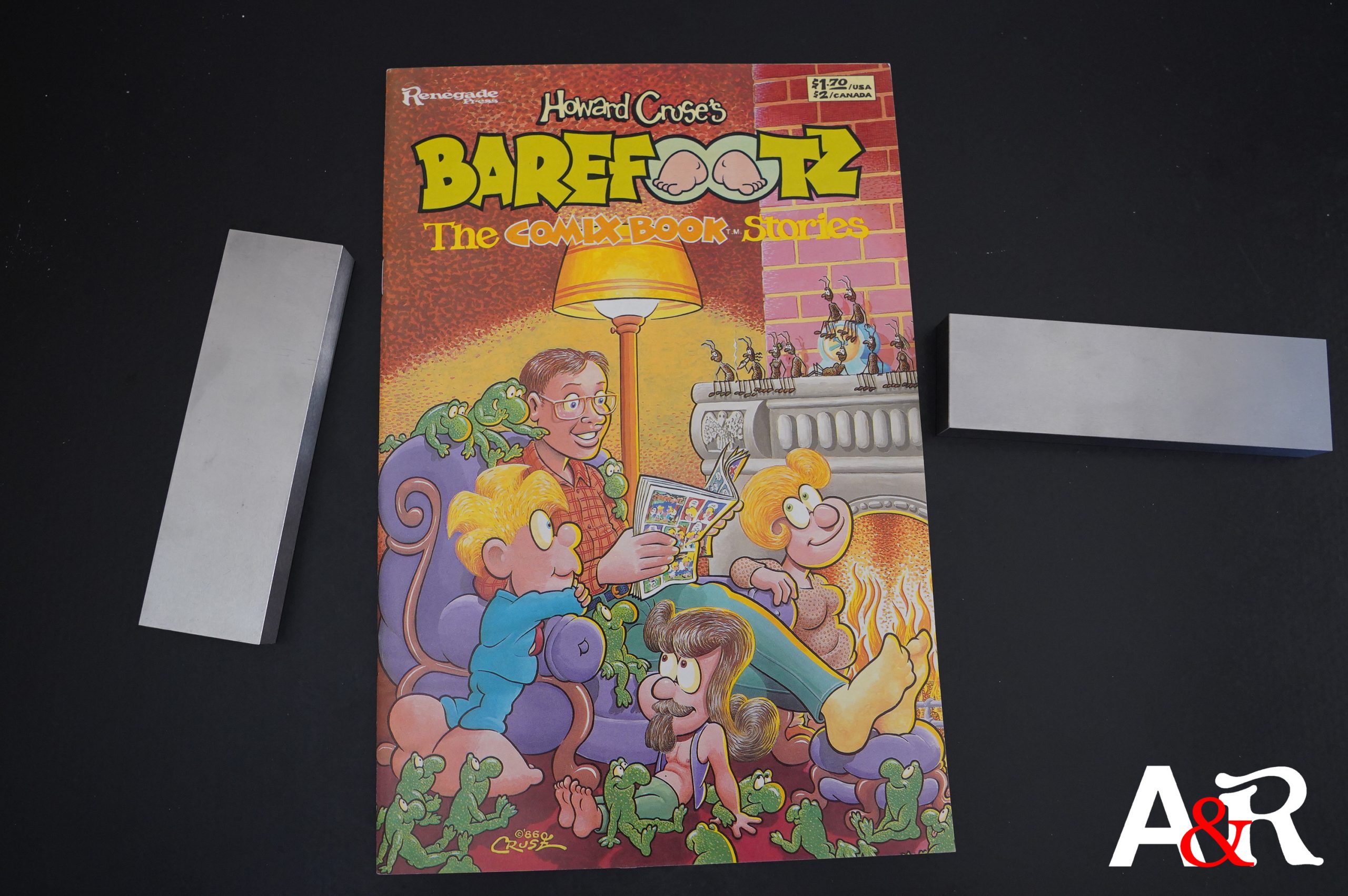 Cruse had published a three issue Barefootz series at Kitchen Sink in the 70s, but had also used the character in the short-lived Marvel “underground” magazine Comix Book. This book reprints these strips. 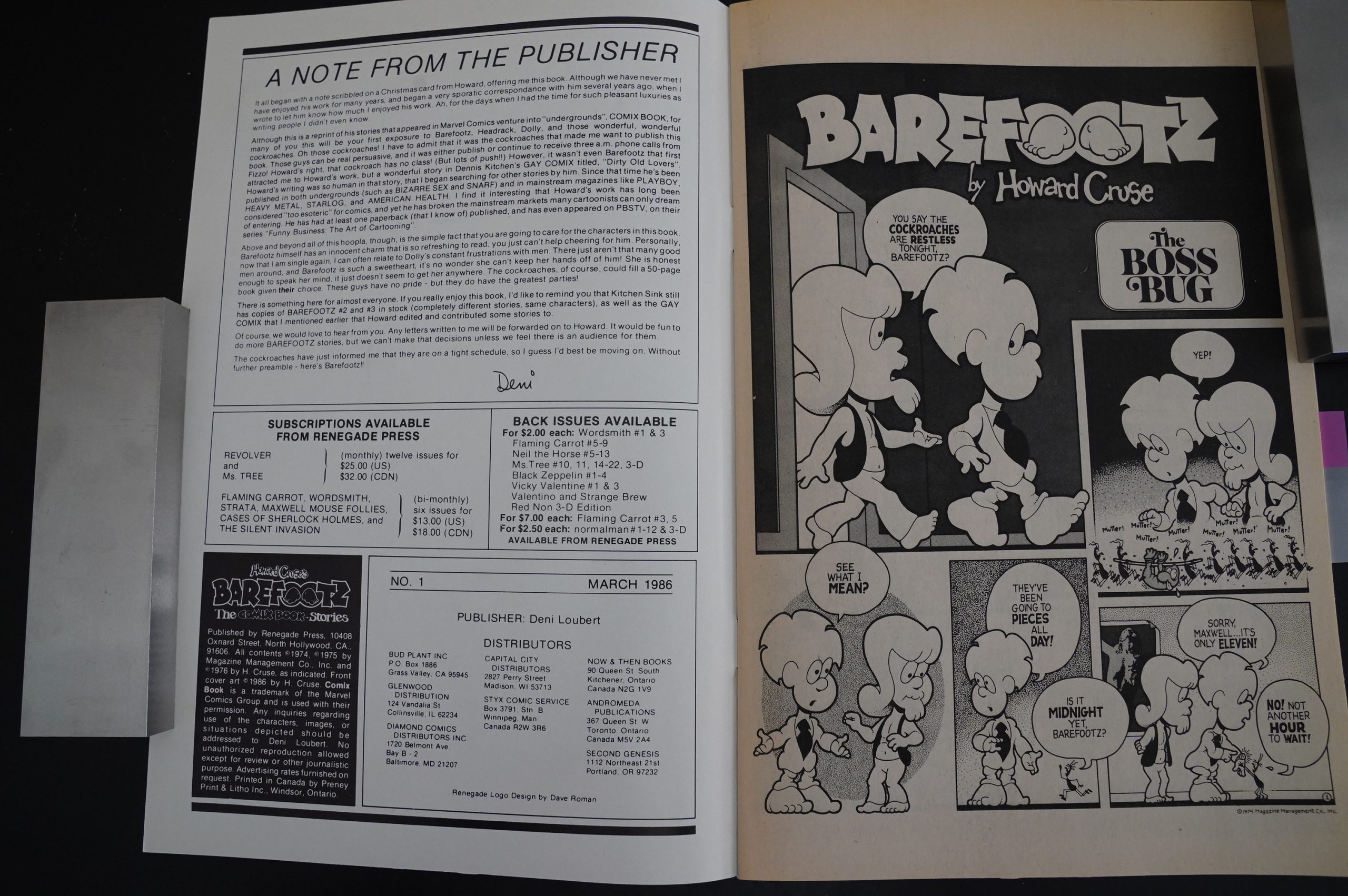 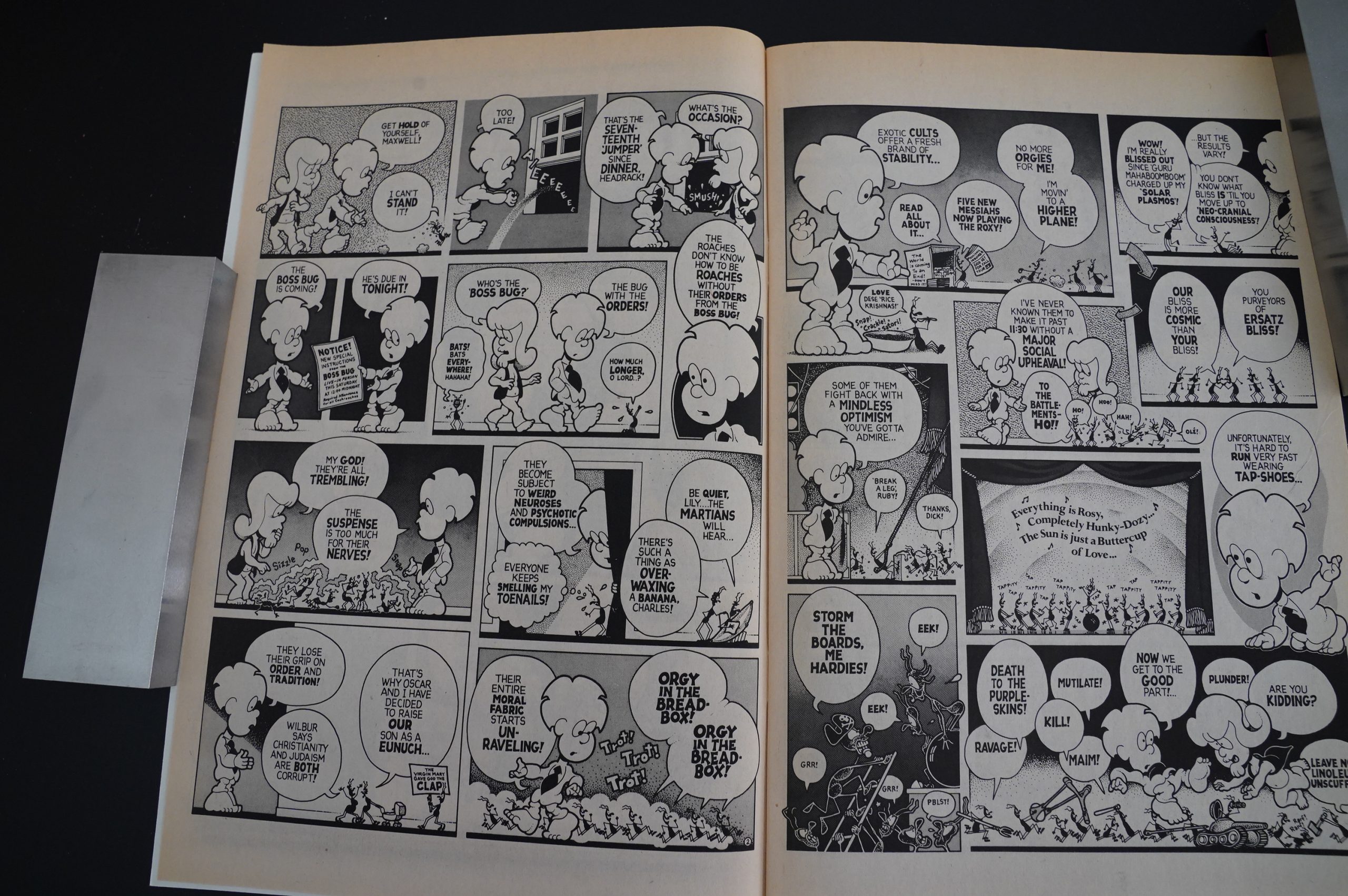 I really like Cruse’s comics — they’ve got a lighthearted mania thing going on. It’s very hippyish, but has a classic sense of plot and timing. 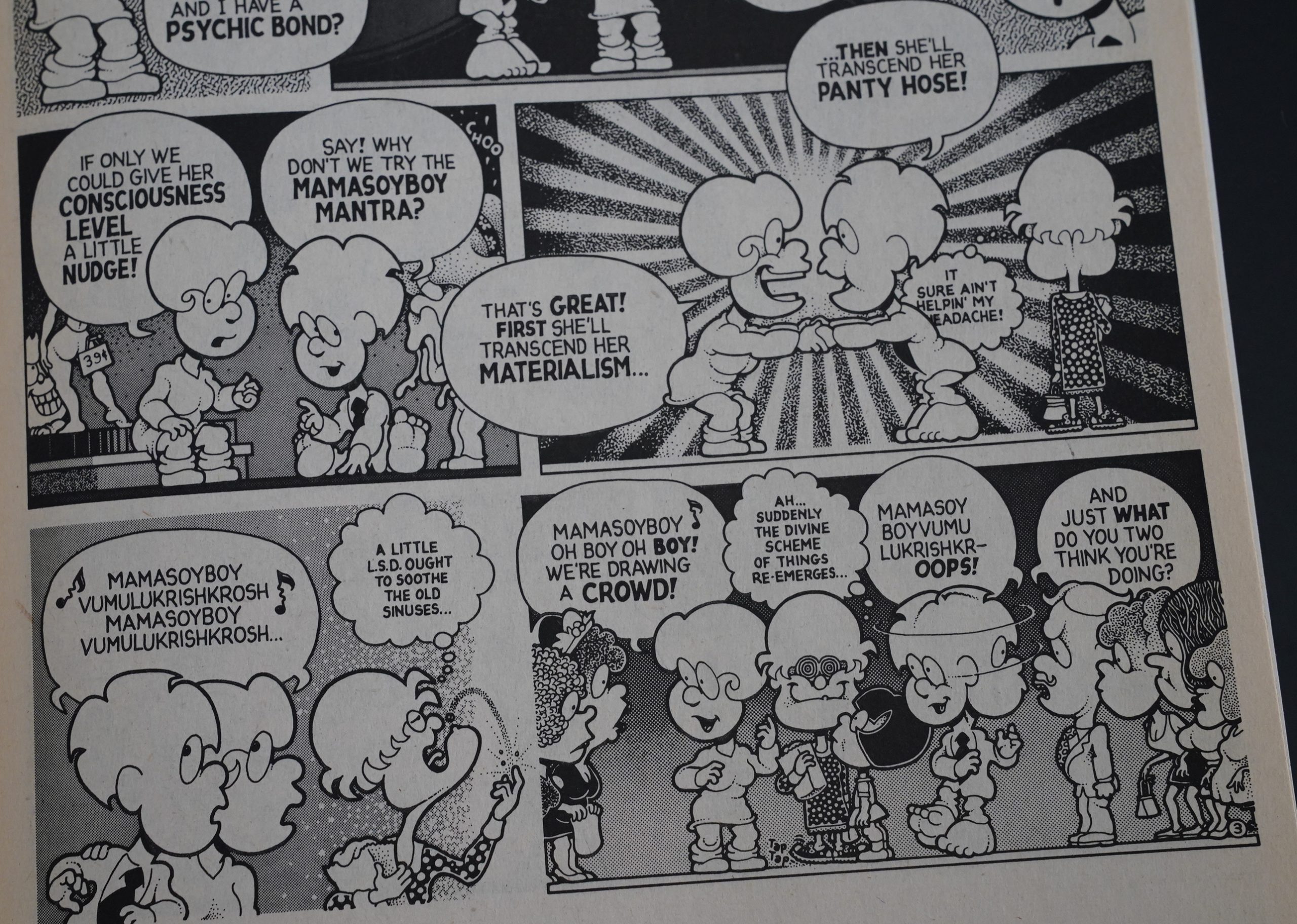 And, of course, the artwork is so… cute? Yeah. 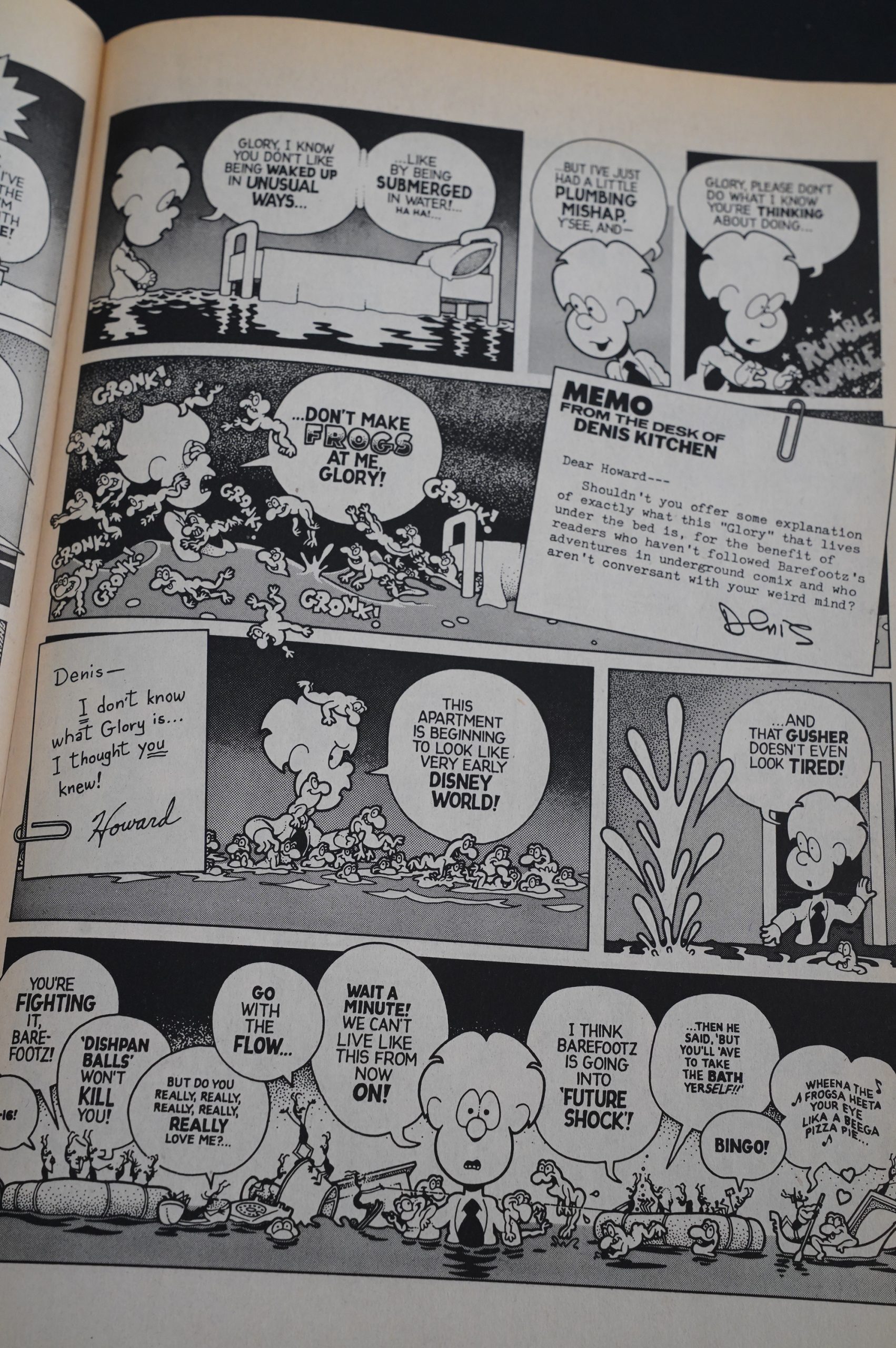 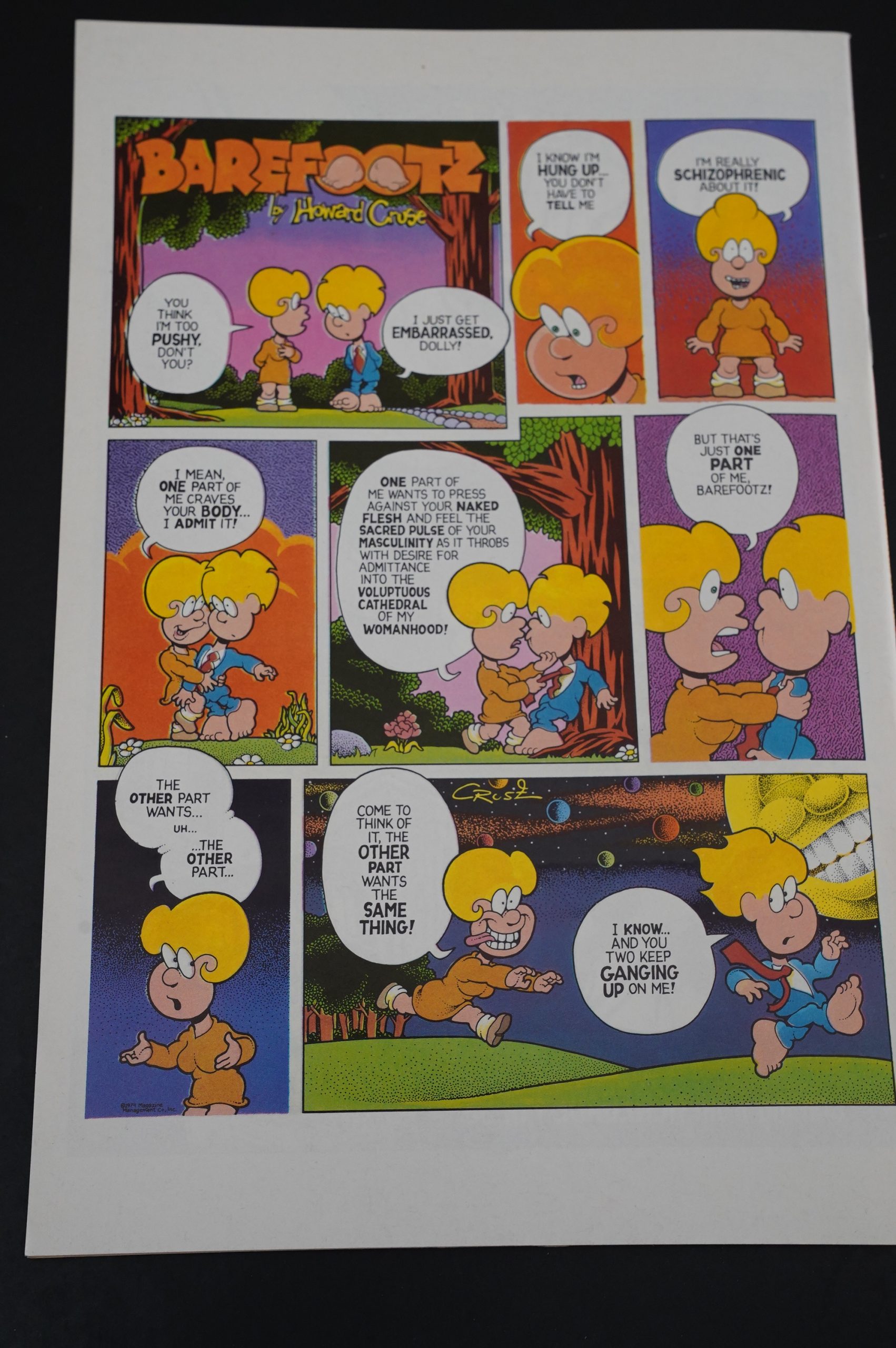 It is totally of its time — and that perhaps explains why it’s never been comprehensively reprinted. I think it’s totally charming, but perhaps some people would find the recurring gag of the super-sexed-up woman chasing the asexual Barefootz tiring.

The early Barefootz was reprinted in 1990 by Fantagraphics, but all this stuff has been out of print for decades now. It’s a shame. Many of the other prominent underground cartoonists have gotten comprehensive collections in the past few years, so it’s about time somebody did the same for Cruse.

Somebody writes in Amazing Heroes #97, page 74:

These vignetteS from a decade
past put to shame most of the afore-
mentioned humorous comics of
today.
By 1975, we were well into the so-
called “Me Decade,” but not yet
enveloped in the fundamentalist frip-
pery of the Carter/Reagan years.
The activism of the ’60s had not yet
been buried; Woodstock was still a
vivid experience rather than a faded
memory.
Some of that ’60s Spirit was cap-
tured in Cruse’s cartoons. While this
will certainly make it more relevant
to older readers, the book has an in-
nate charm that should also appeal
to those who think The Chicago
Seven is the offensive *line of the
Bears football team.

While we are still not witnessing
side-splitting comedy here, Bare-
footz succeeds in being a genuinely
funny book. I think this is largely
because Howard Cruse knows how
to write—not just how to write
humor, but how to write period. He
first creates actual stories, or at least
fully developed situations. Since he
has a story, he doesn’t have to simply
string weak one-liners together, but
he can let his dialogue flow naturally
from the particular situation. The
resultant humor is much more
warm, charming, witty and funny
than that found in many other com-
ics. Another advantage is that much
of Cruse’s humor comes from be-
lievable characters (which descrip-
tion even fits his cockroaches),
rather than from contrived pastiches
that are really little different than the
superhero/fantasy/horror comics
they ape.
Cruse is also a very fine cartoonist
whose work is equally adaptable to
either a color or black-and-white
format. I can’t firmly place my
finger on his possible influences,
though I do feel he owes more to
newspaper and magazine cartoonists
than to any comic book penciller (of
either the undergound or main-
stream variety). He has an appeal-
ing style that carries the same
warmth and gentle humor that
characterizes his writing.
Barefoot: is one of the best things
to come from Renegade Press in
recent memory. If reading other
“funny” comics has left you with
doubts about your own sense of
humor, this book should certainly
restore your faith in yourself. Check
it out.
The stories here may be a decade
old, but they prove that true humor
is timeless.