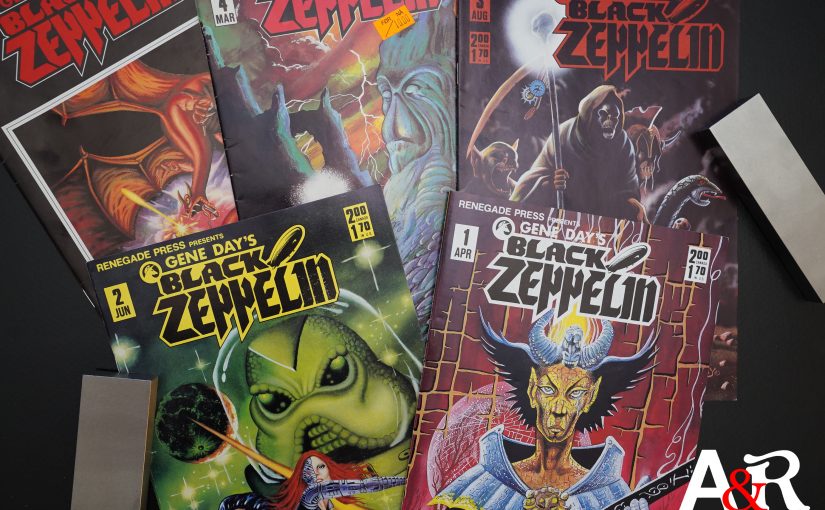 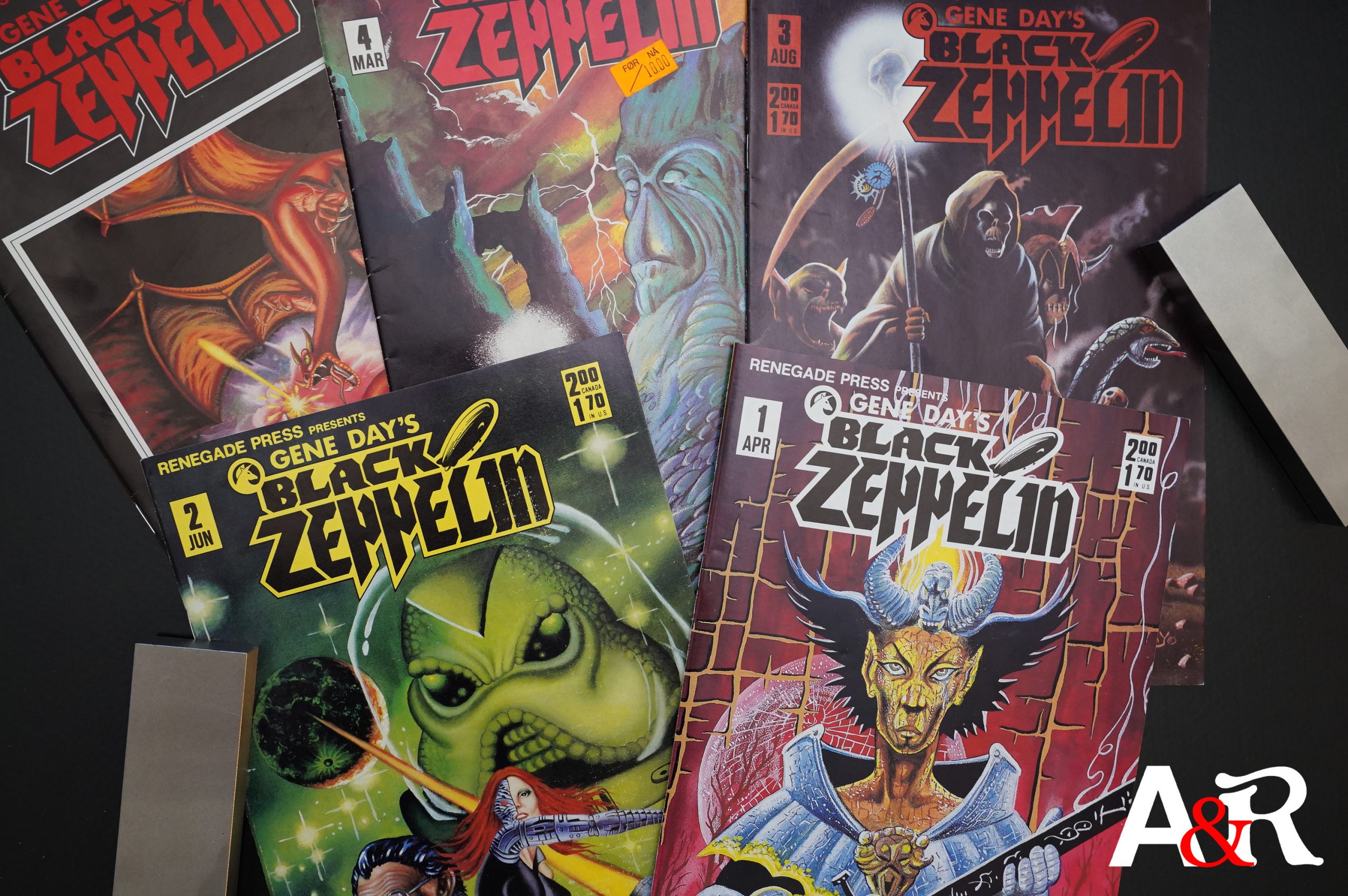 Gene Day died in 1982, but left behind a number of half-finished projects. This series collects these bits and bobs along with other pieces already published in fanzines, as well as new comics from friends of Day. It’s a pretty unique series in that way. (And one I feel even less comfortable saying snide things about, I mean, doing an insightful, deep critique of, than usual.) 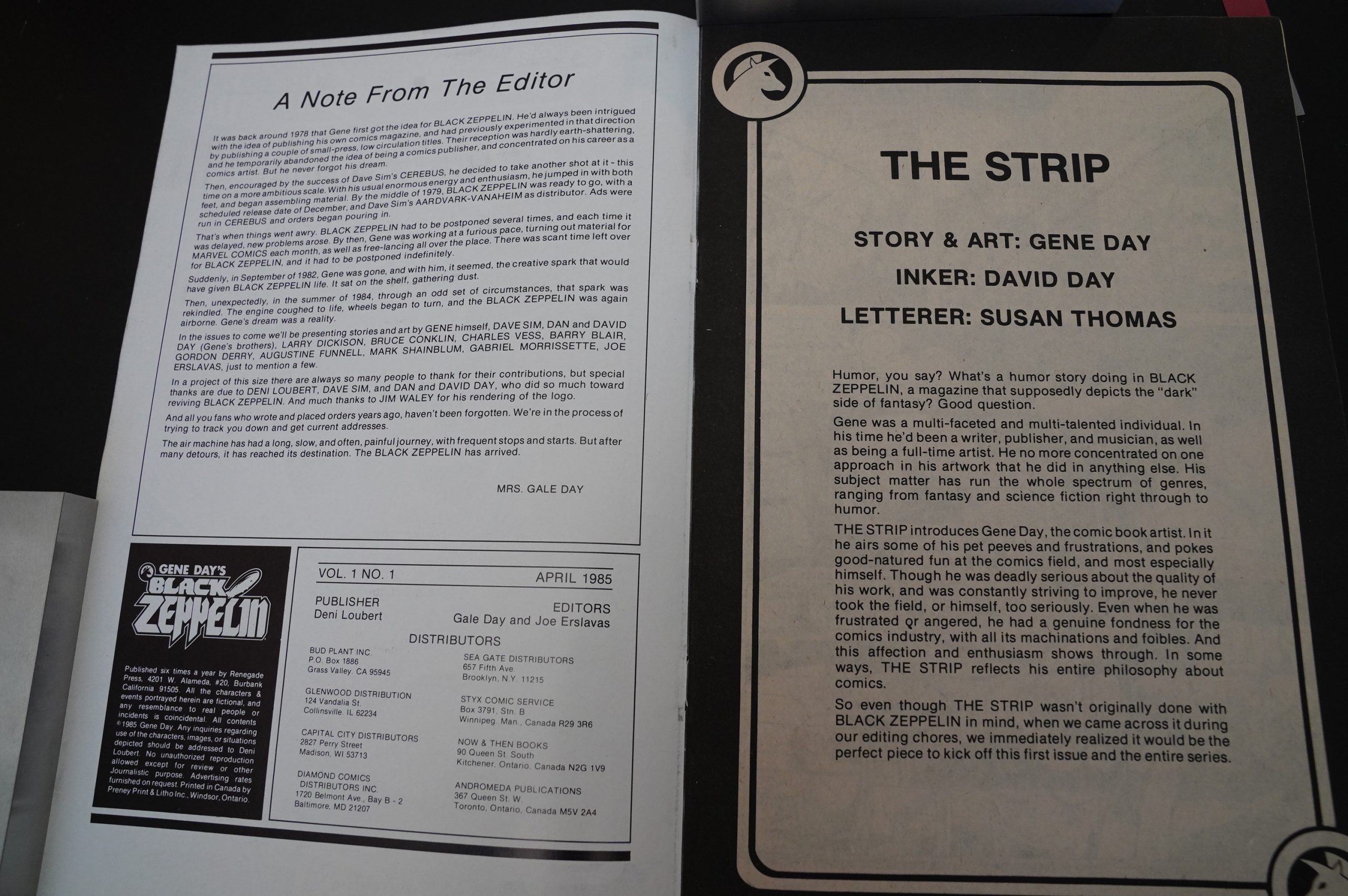 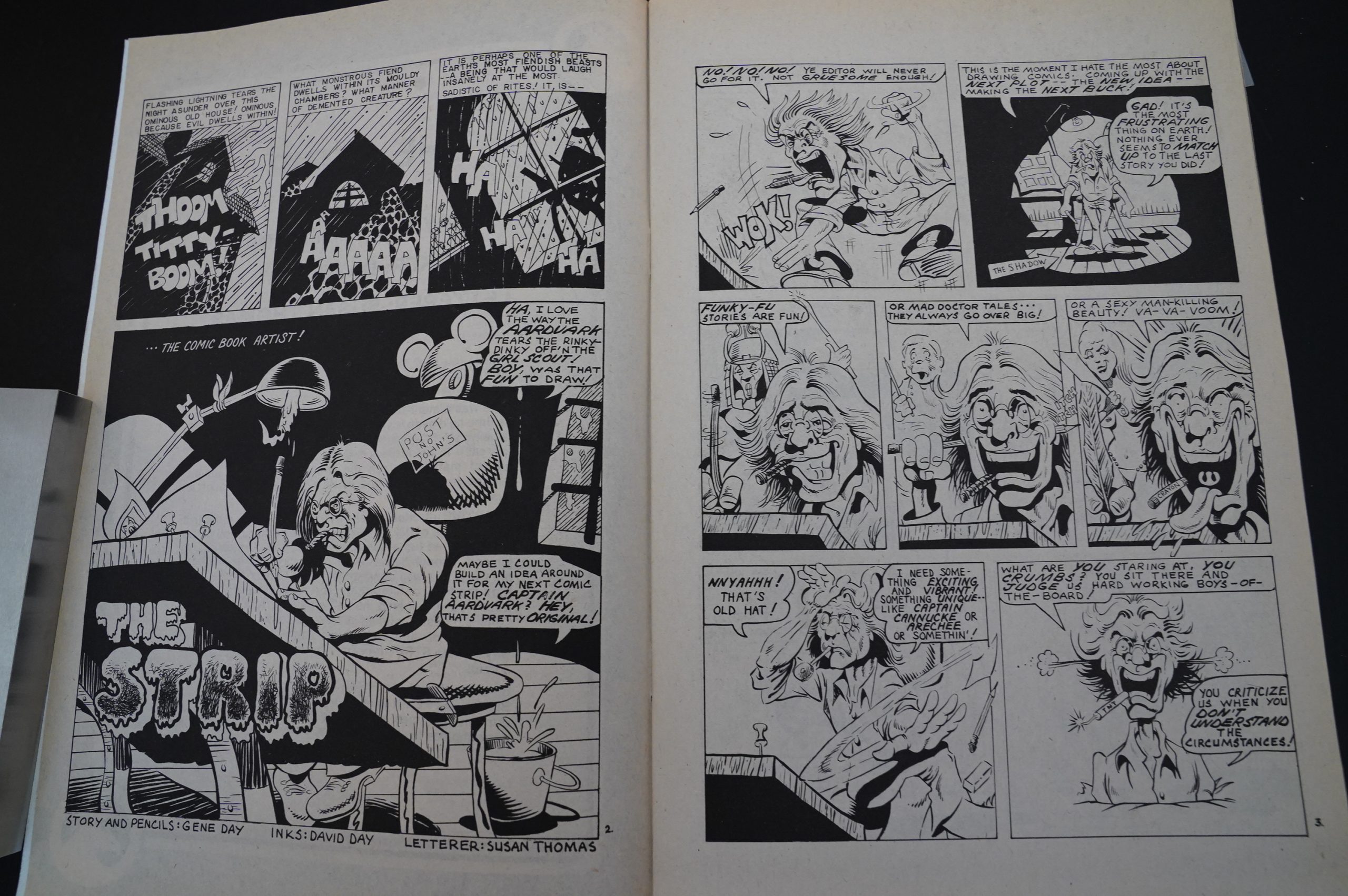 There’s a letters page in only one issue, and apparently starting this series with this Gene Day comic (inked by his brother David) was controversial? Because it’s a humour piece? It’s pretty amusing, anyway. 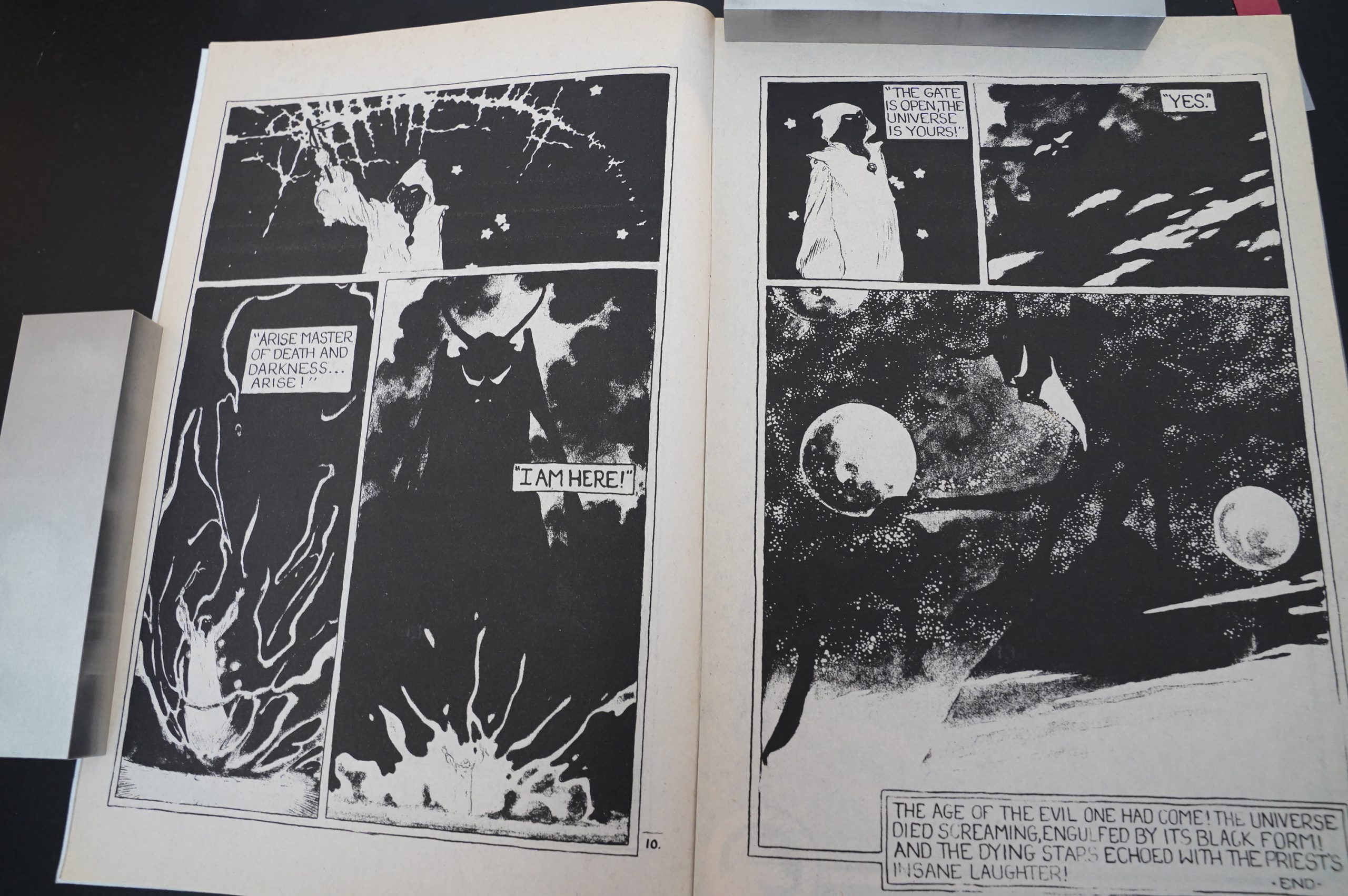 This storylet by Charles Vess was meant for the original never-published version of Black Zeppelin. (Which was announced, and they apparently took orders (via mail) for it, but then it never happened. It’s like Kickstarter three decades too early.)

Anyway, the Vess piece is very interesting visually… or… misprinted? I’ll go with the first one. It’s not much of a story, though. 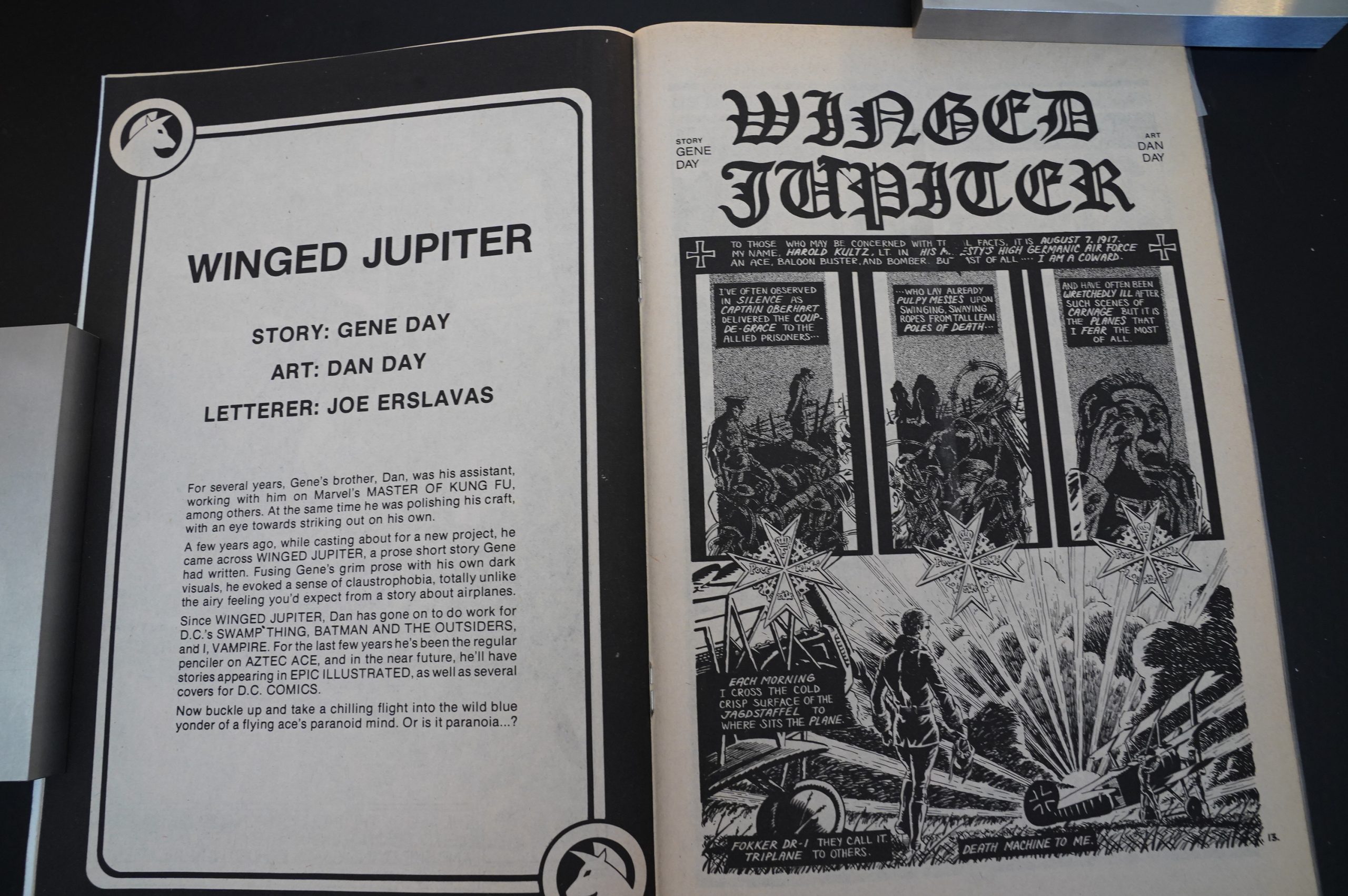 Several of the pieces are based on short stories (scripts?) by Gene Day, that have been adapted by one or both of his brothers. Here’s Dan Dan. 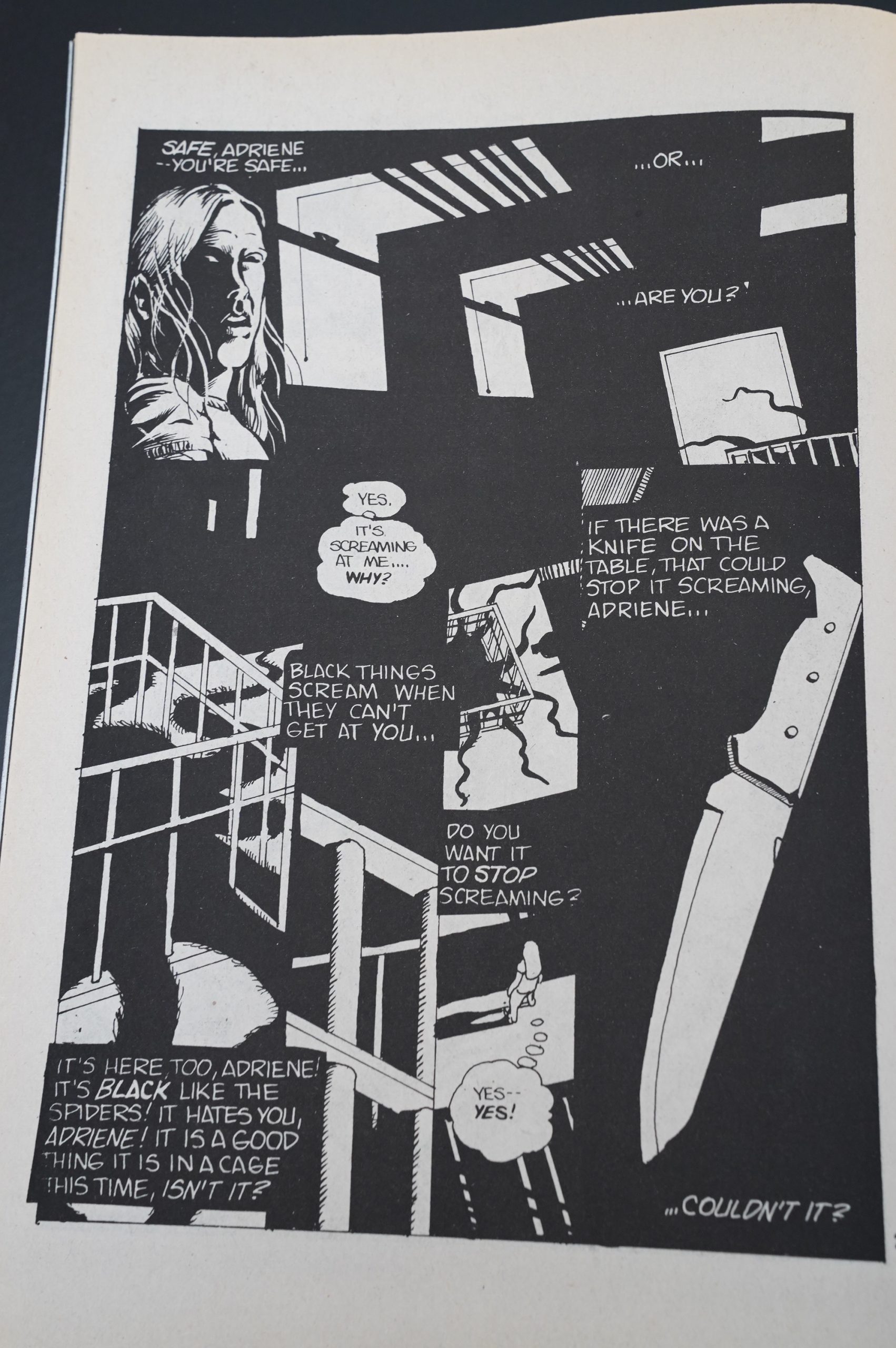 This quite twisty strip is by Dave Sim. Visually interesting and very accomplished. 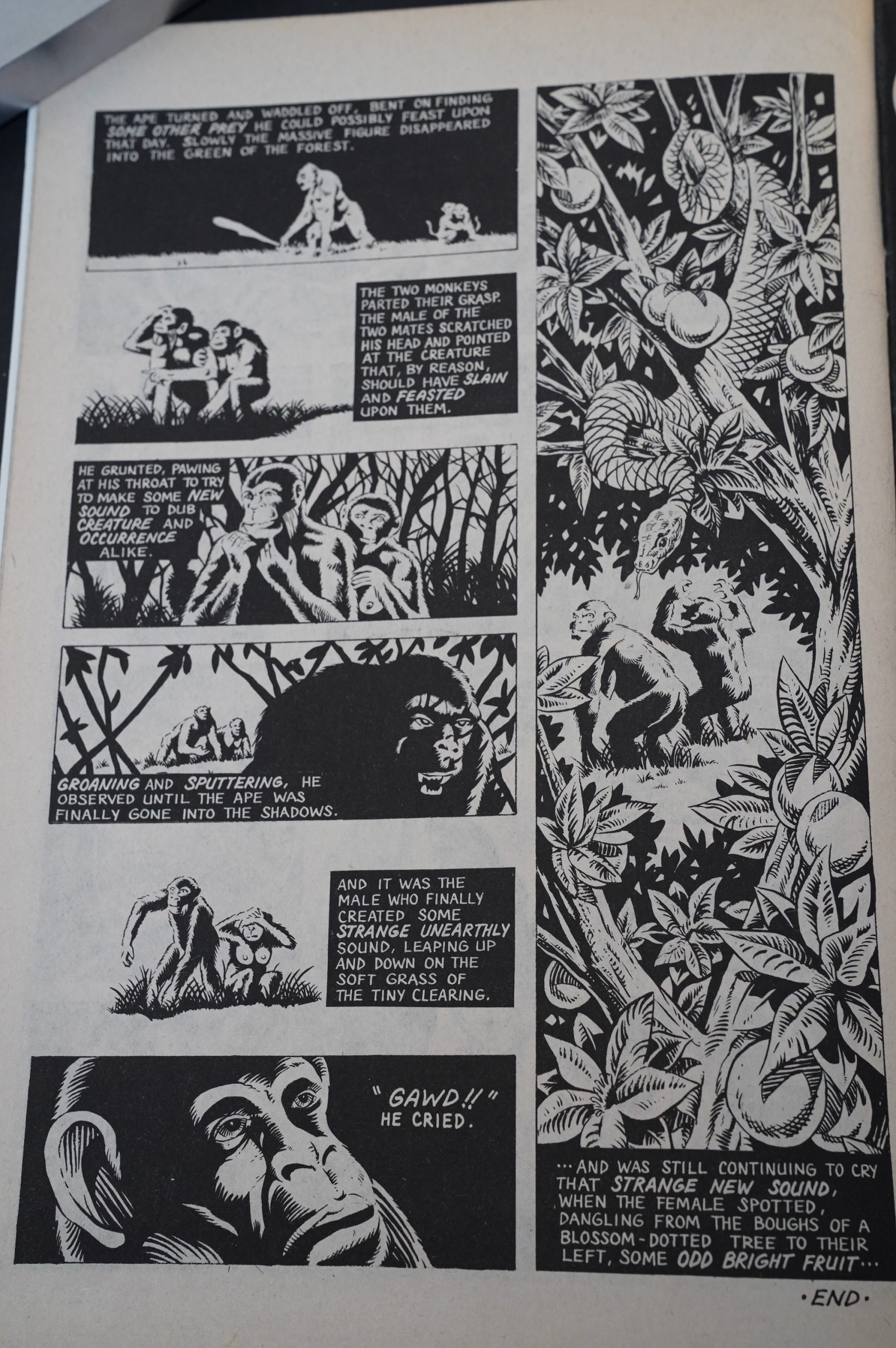 This Dan & David Day (from a story by Gene Day) has a twist ending, as usual, but this one I totally didn’t see coming. Kudos! It’s interestingly told, as well, and that tree sure is pretty. 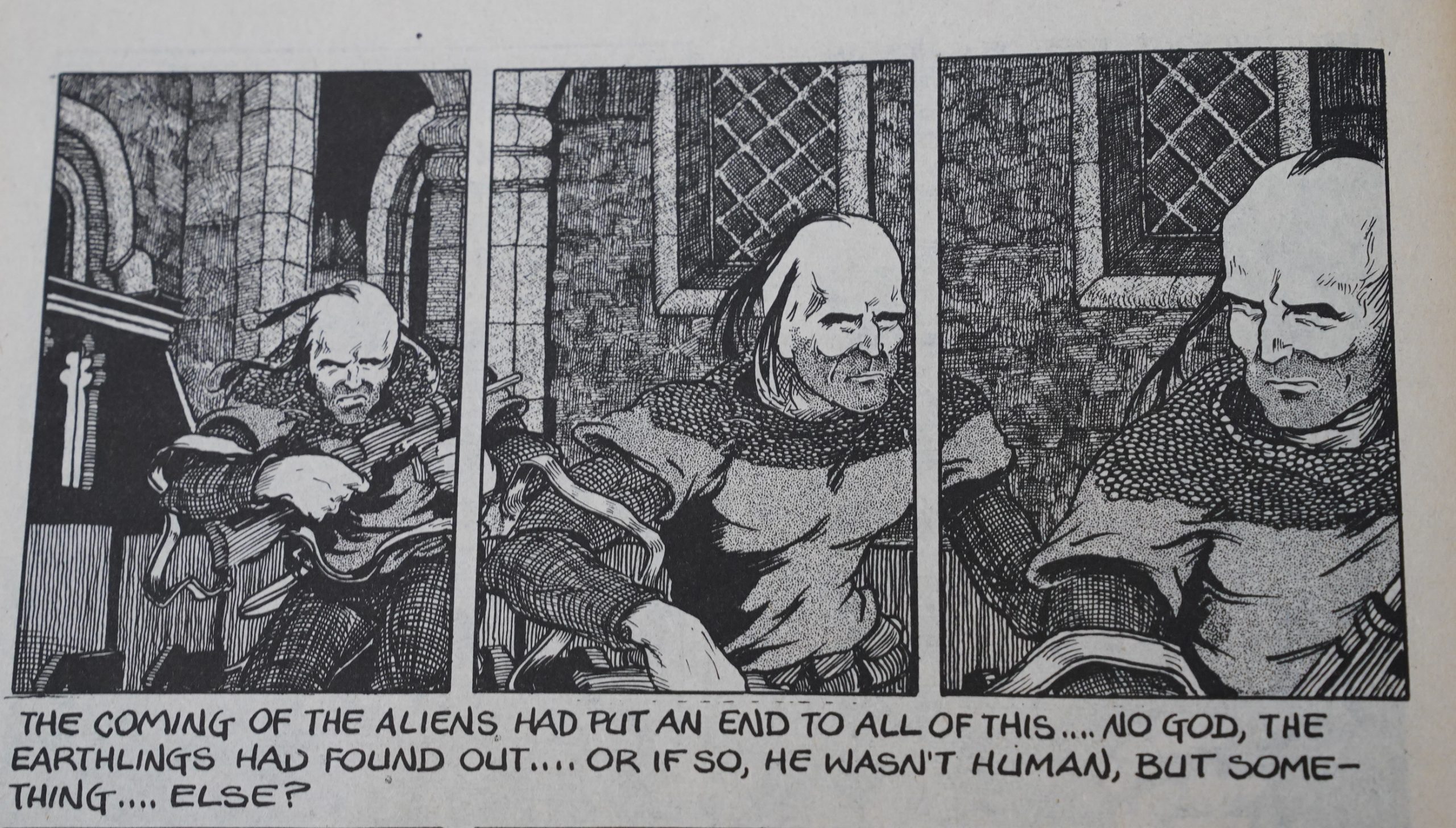 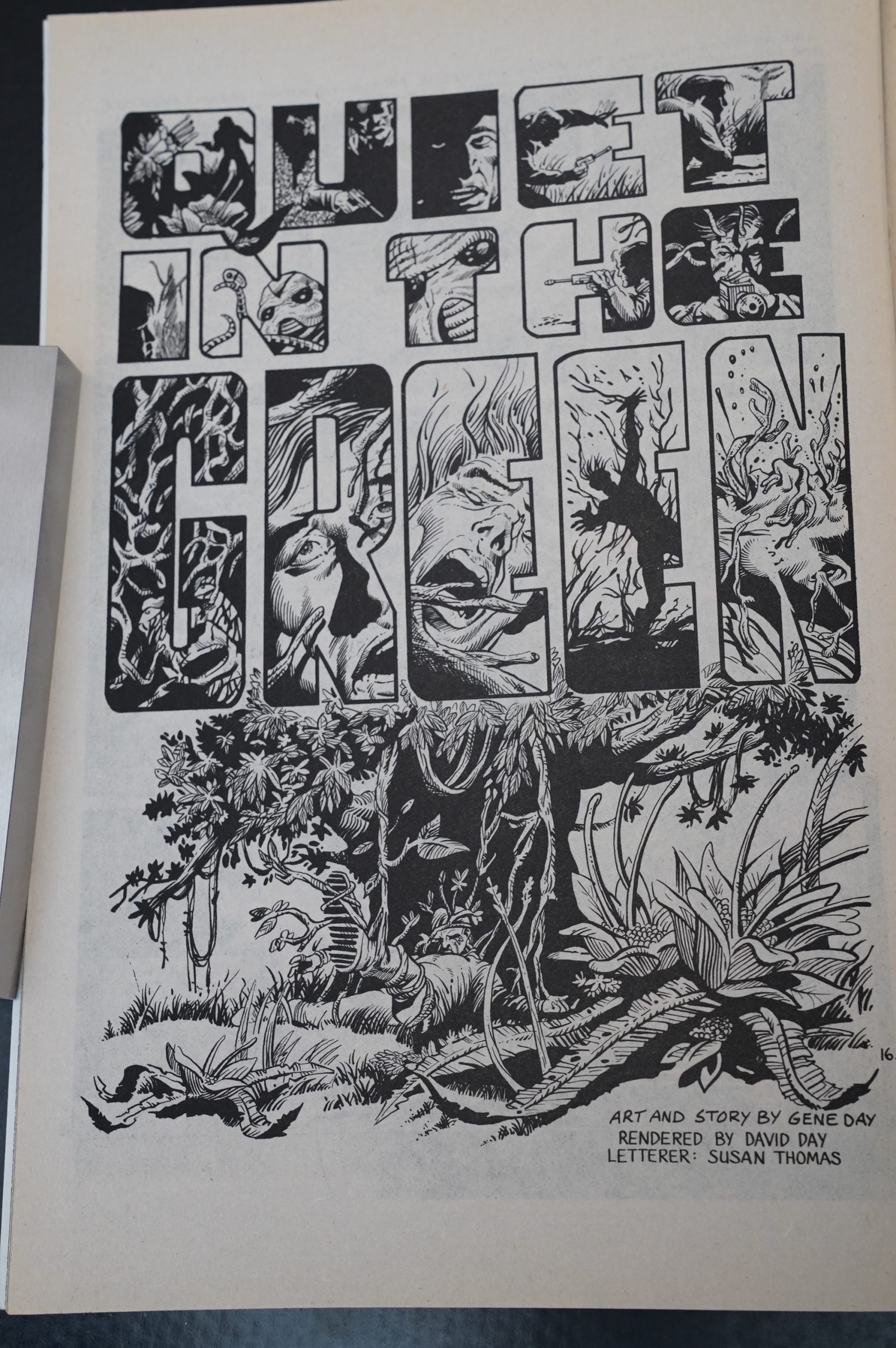 Unusual credits here, but here’s the explanation: This was a strip Gene Day had sold to a publisher, but it had never been published, and the original artwork was lost. But they had bad xeroxes of it, so David Day has re-drawn it from those xeroxes.

A lot of work has gone into this series! 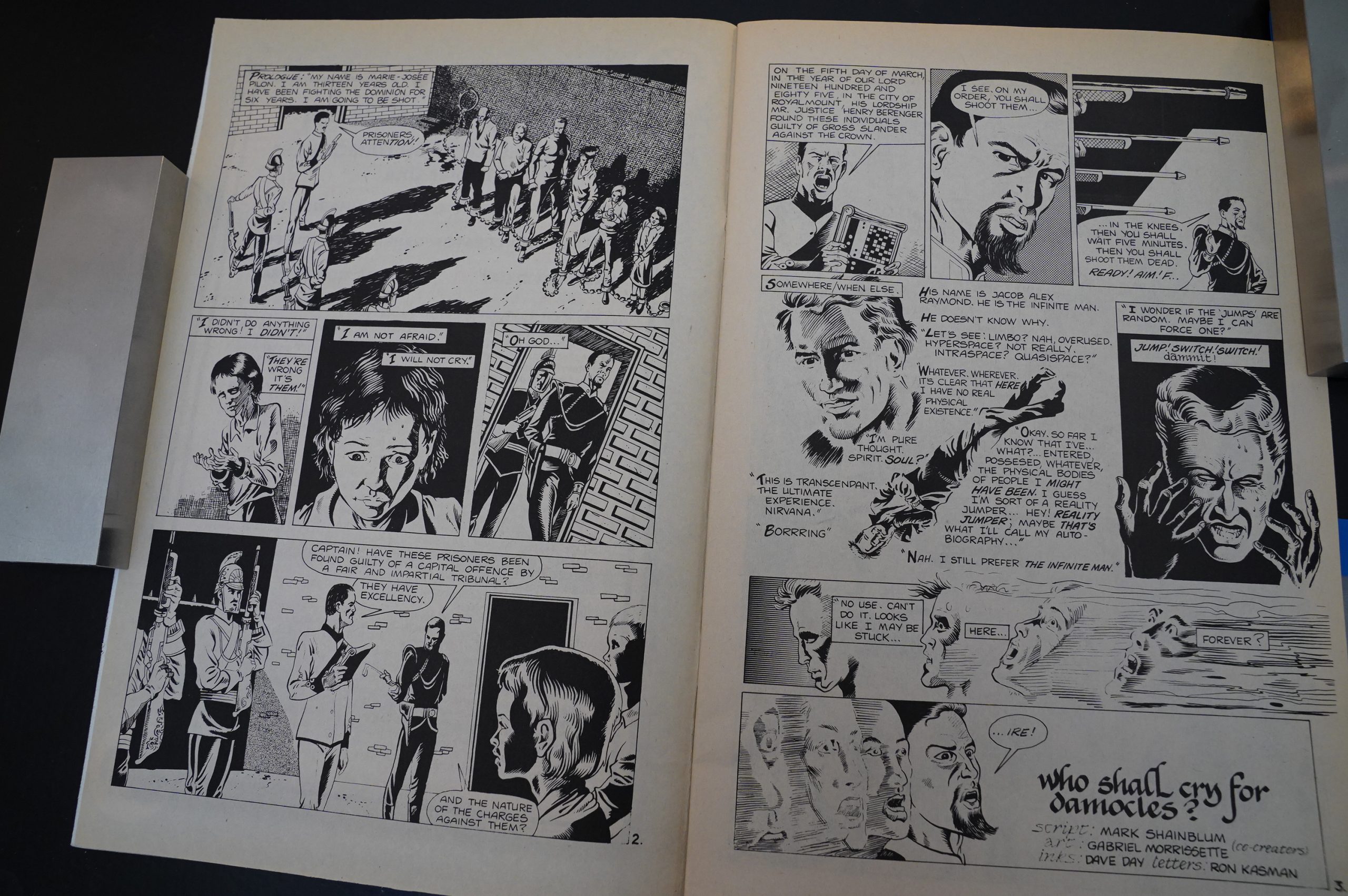 The first three issues were the normal 24 pages of an Aardvark-Vanaheim or Renegade comic, but they switch to 32 pages with the fourth issue. The series was projected to last for six issues (depending on how much material they we finding), and I guess this meant that they had more material than expected, and didn’t want to go for seven issues?

Anyway, the fourth issue introduces a three-part serial by Mark Shainblum, Gabriel Morrissette and David Day… and the connection to Gene Day is somewhat unclear? The introduction doesn’t state that this was intended for the original Black Zeppelin, so I’m not sure where this came from? 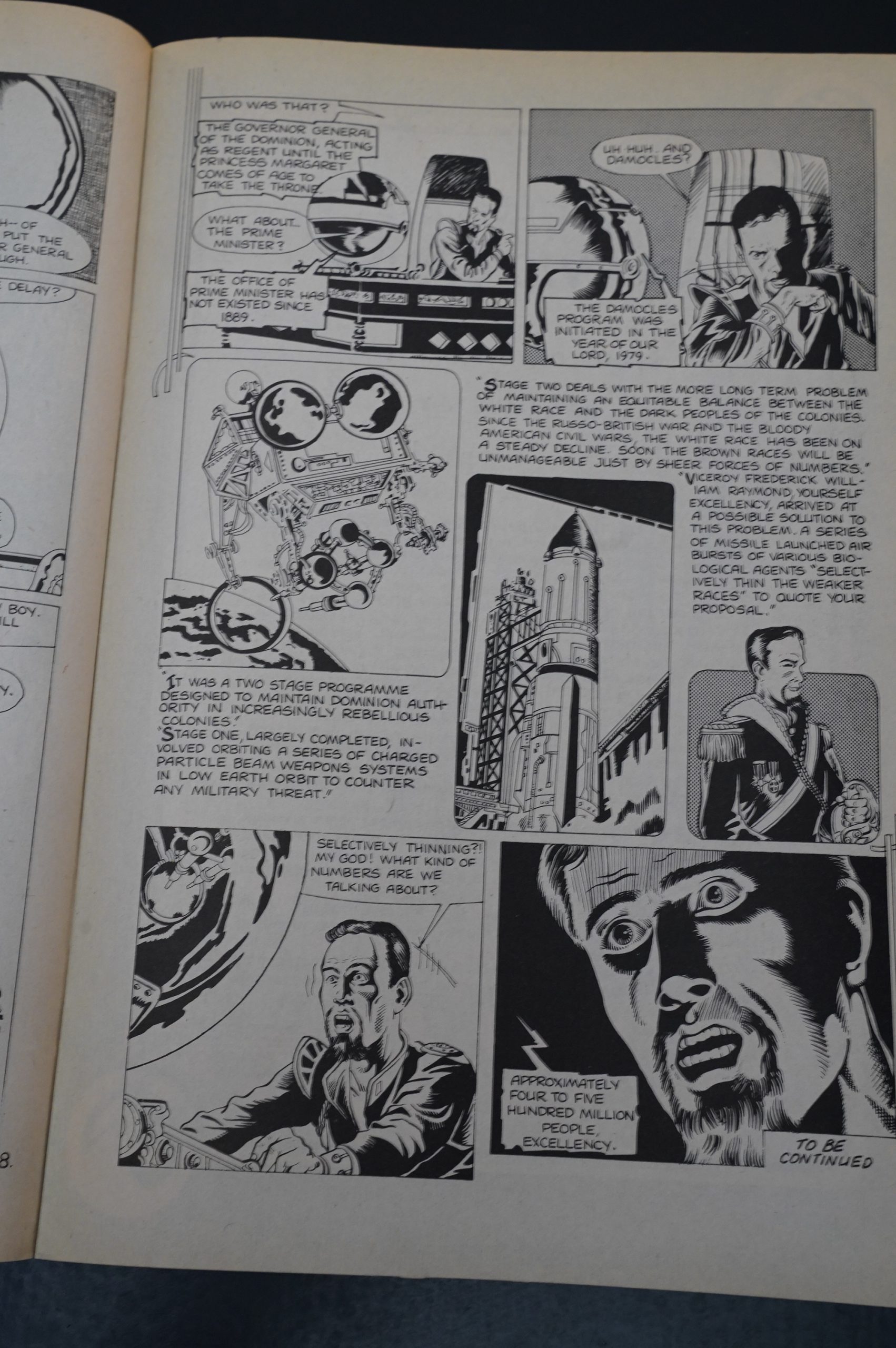 I guess it fits in with the rest… but it’s odd: It’s about a super-hero or something who can skip between realities and inhabit other people. Here he’s in a Fascist Canada, but he conveniently has a talking computer who can explain to him how this world works without anybody getting suspicious. 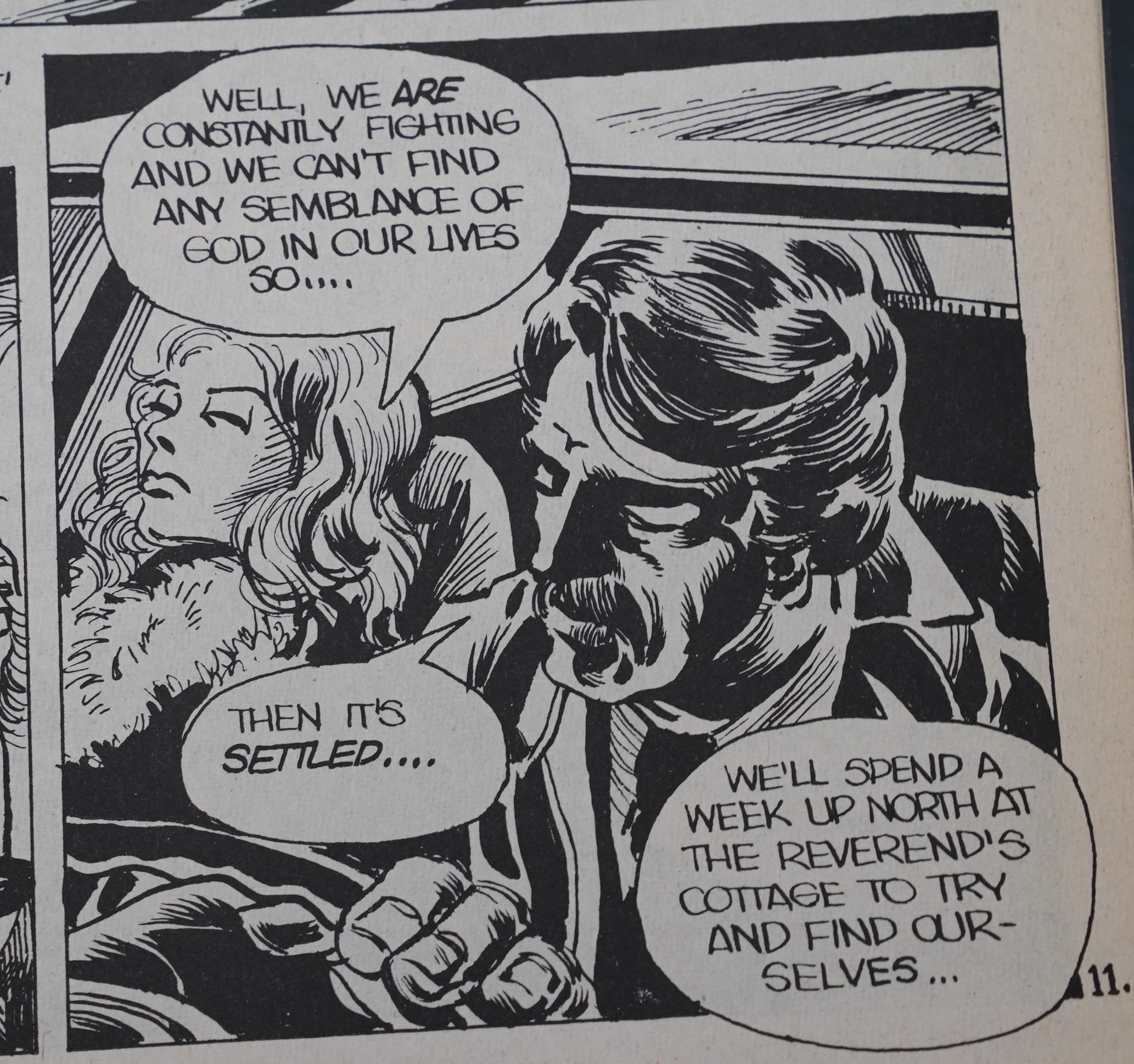 This Dave McCarthy/Dave Sim thing is more in tune with the rest of the book. And that’s a very different rendering technique to what Sim usually uses. 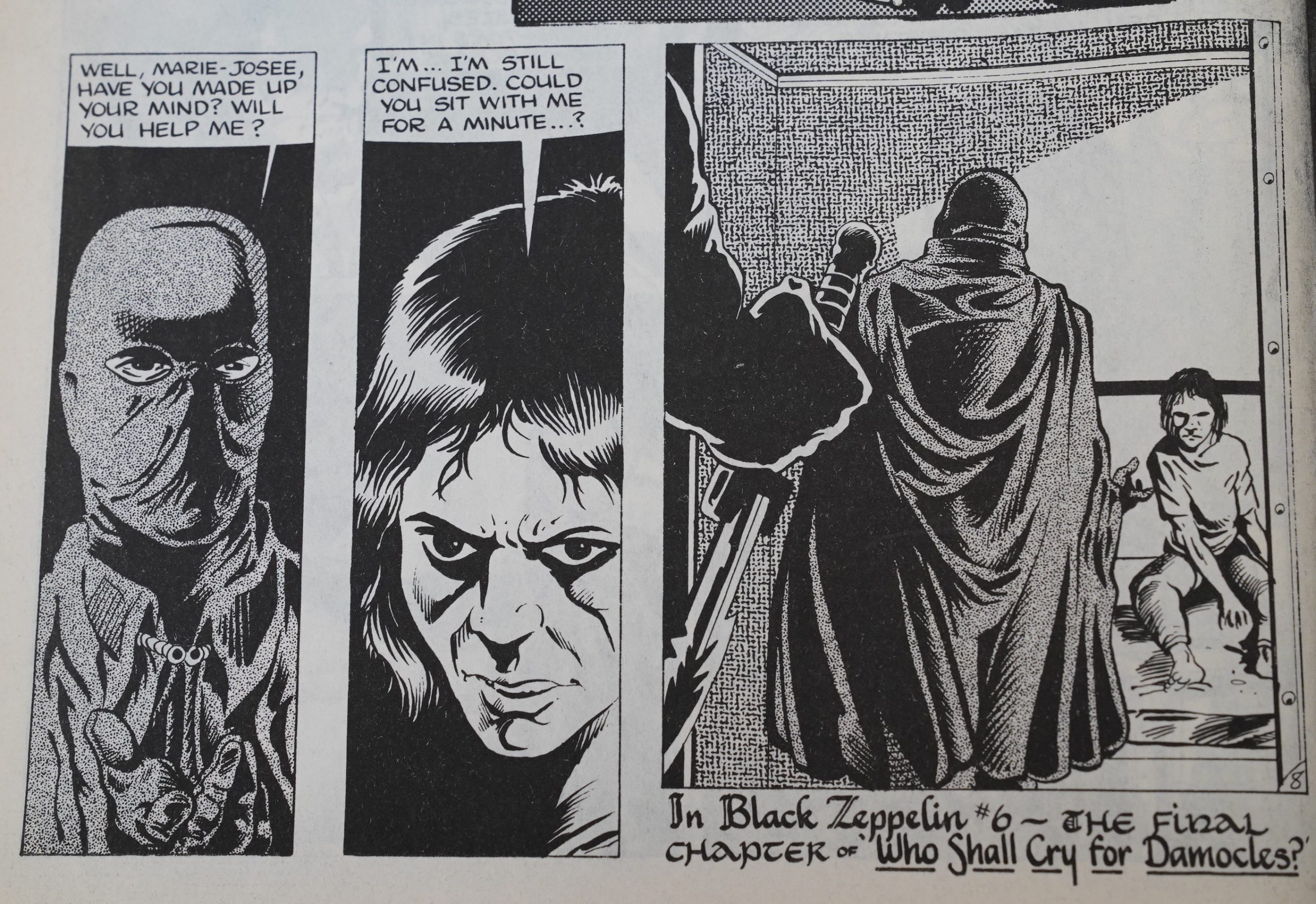 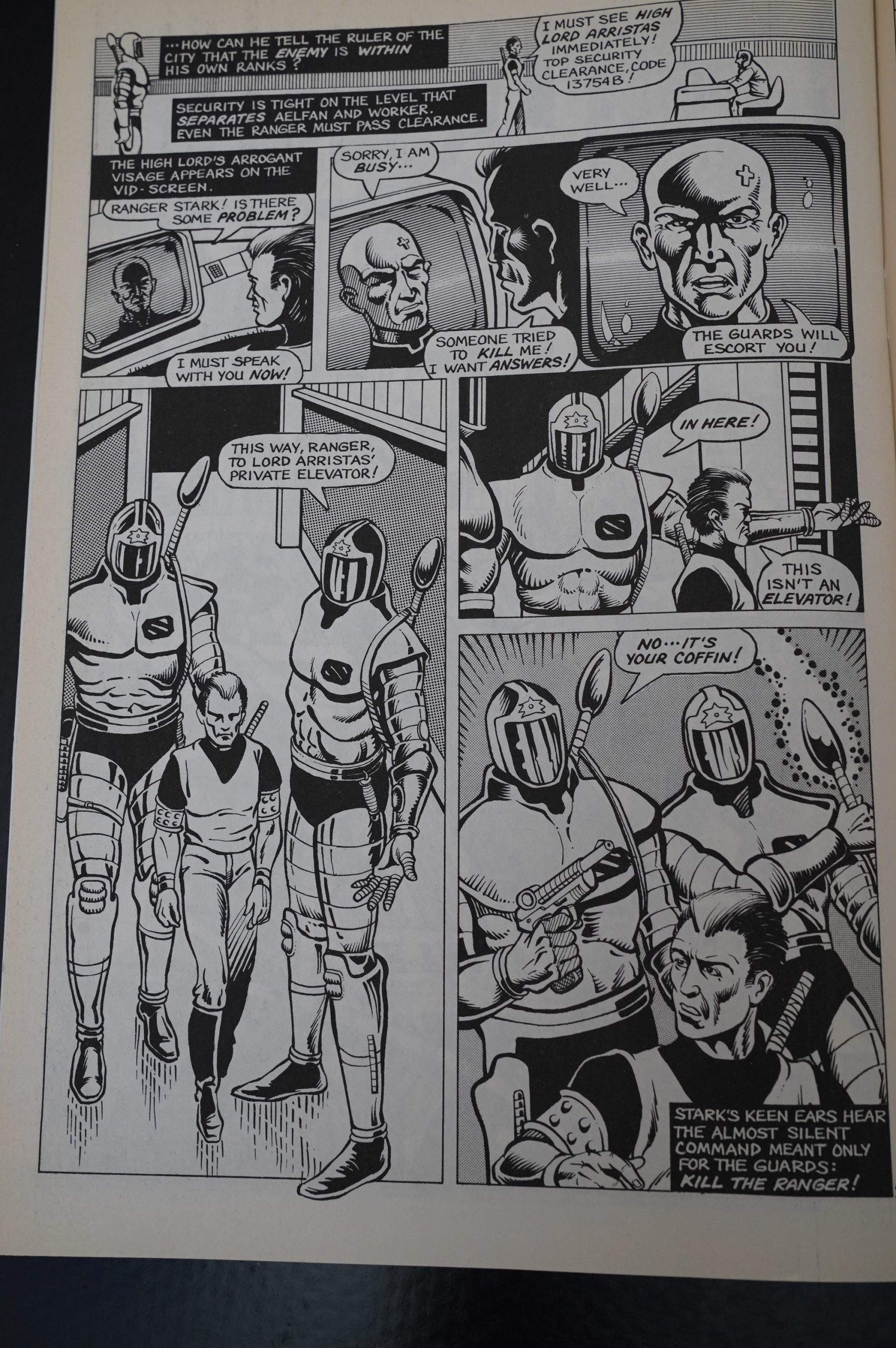 This is a surprisingly coherent and pretty enjoyable series to read. There’s only one thing that’s… like… bad: This thing by Gordon Derry, Barry Blair and David Day. The inking (by David Day) is the only thing it has going for it. 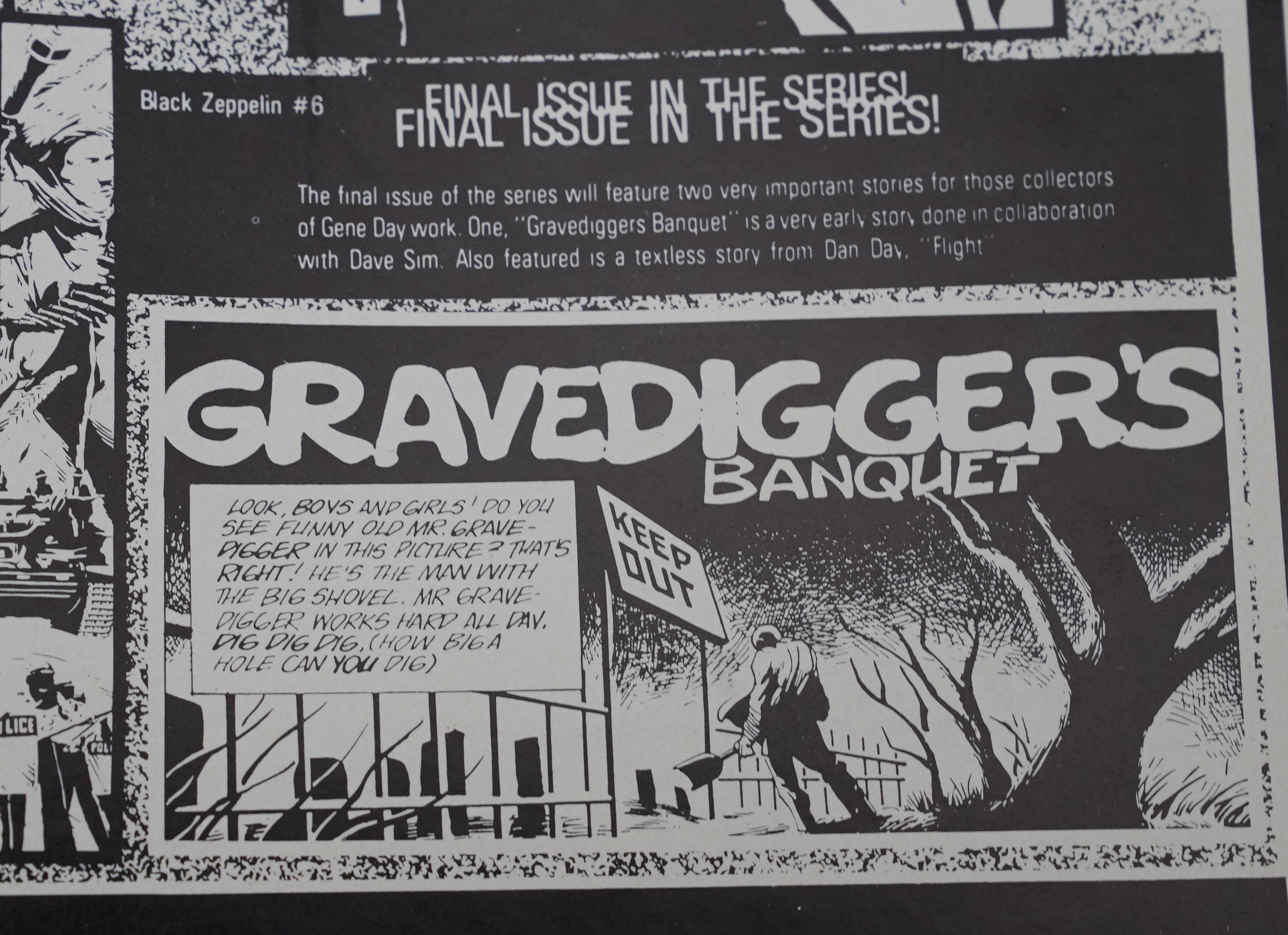 The coming attractions on the inside back cover lists Black Zeppelin #6, and says that it’s featuring the Gravedigger’s Banquet story… which was printed in #5! 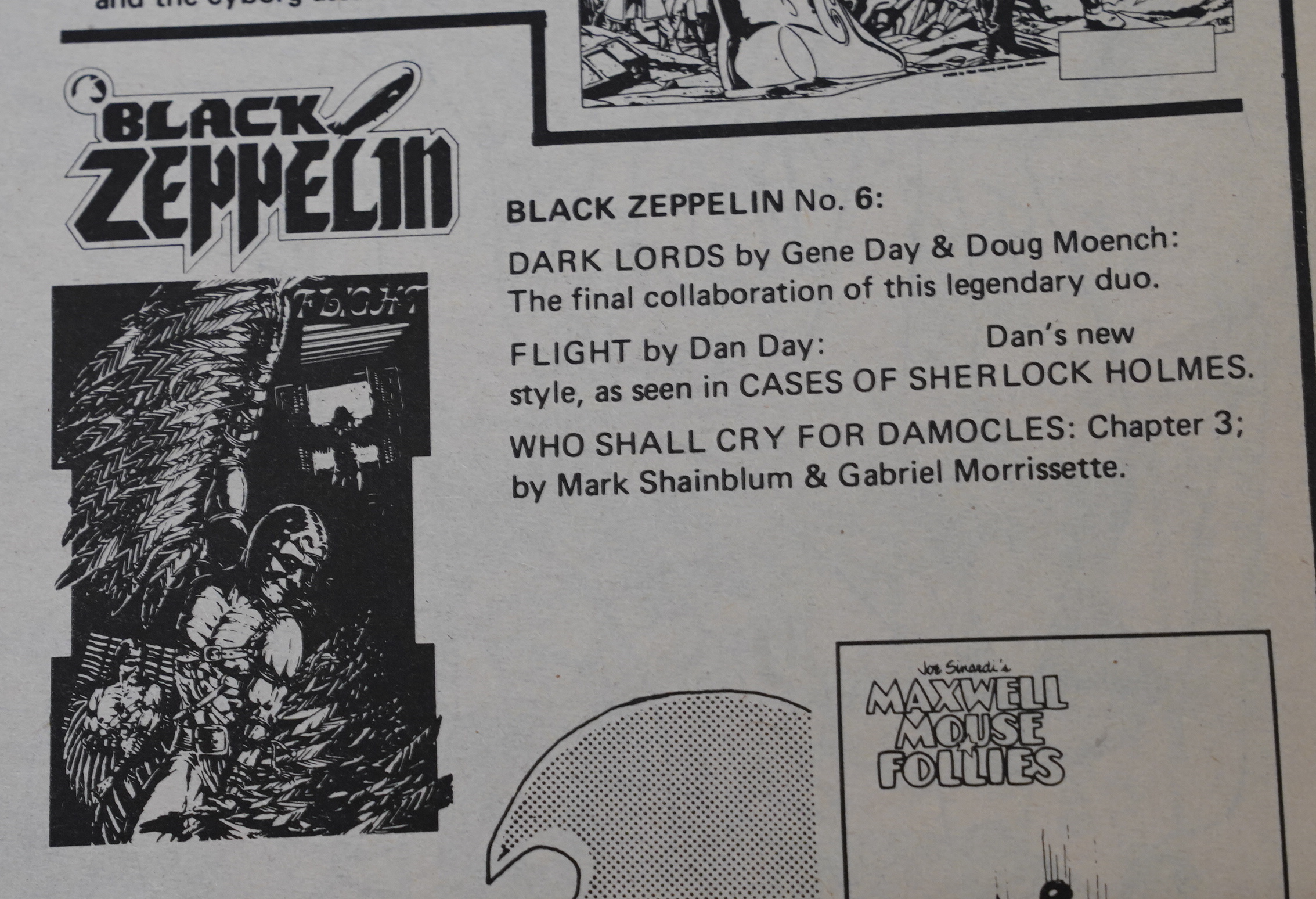 So who knows what went on here? Certainly not me. Let me do some googling…

So it wasn’t discontinued due to lack of material:

The first story is titled, “The Strip”, with story and art by Gene, and is a very candid look at his life as a comic book artist. Rarely as comic book readers do we realize just what these artists have to go through to produce the quality of work we all get to enjoy, and Gene gives us a good glimpse of his life behind the drawing table.

Well, there isn’t much about this series on der untertubes, which isn’t surprising.

Black Zeppelin is a new science
fiction-fantasy anthology book due
from Aardvark-Vanaheim around the
end of March. This is a prdject
begun by the late Gene Day some
years ago, but left on the shelf after
his death. It is being put together by
Joe Erslavas, an associate of Day’s
and artist whose work appeared in
the magazine Dark Fantasy some
time ago. Day’s widow, Gale, is also
working on assembling the book.
The first two or three issues of
Black Zeppelin will be what
publisher Dave Sim (a close friend
of Day’s) calls “a monument to
Gene,” containing stories by Day
and others, such as Charles Vess,
who worked with Day and were in•
spired by him. Day’s influence on
other artists was a vitalizing one,
Sim explains, helping them try
things they’d never done before. “l
know I did a lot of stuff with him that
I never would have done on my own.
Somehow he made it plausible.” In
this connection, there will be
severaltextpieces by the artists on
their work with Day.
After this, the book will remain as
a shopcase for short pieces, and a
place for new talent to develop. Sim
feels it’s important merely to have a
place tike this available for writers
and artists. “If someone has a
science fiction story they want to
do, they’ll have this.”

Oh! Dave Sim originally intended this to be a continuing anthology series.

BELL: Gene obviously left a large number of
unfinished projects. Can you tell us
how Renegade’s Black Zeppelin came
about?
DAY: Deni Loubert approached me last
year in Ottawa, at Maplecon 6, and asked
me about doing some work for Aardvark-
Vanaheim. She mentioned Black Zeppelin.
Joe [Erslavis] has edited these, along with
a large number of partially finished stories
that Gene was working on before he died.
With all that, and a couple of new stories,
there was enough to fill six issues.

Each of the first three issues contains four
features—original strips by Day and others,
adaptations of Day’s short stories, and an
occasional illustrated poem. All save the
poems are preceded by an introductory page
with information about the piece and those
who worked on it. Those familiar with
Gene Day only from his Master of Kung Fu
are in for a delightful treat, for the book is
an excellent showcase for the full range of
Day’s skills as a comics artist, writer, and
collaborator. The stories are uneven, as is
the case with most anthologies, but all are
at least worth the reader’s attentior„
Several of the stories are reminiscent of
the better stories one can find in Warren
magazines of the early ’70s, with their hor-
ror/SF subject matter and ‘ironic twist Of
fate’ endings. In fact, I was half expecting
Uncle Creepy or Vampirella to show up at
the conclusions of “Slaughterhouse Passing,”
“Quiet in the Green,” ‘ ‘It Waits,” and “The
Eaters.” On a more serious level, several
Other stories are worthy of special note:
Charles Vess has a striking feature called
“Priest,” which Vess himself notes is not so
much a story as an “excuse to draw some
which images are disturbing
Images..

None of these stories are very long—each
issue of the book is only 24 pages (though
the publisher promises more pages in issue
#4), but the material is easily worth the
cover price for fans of short strips and a
must for those who liked Gene Day. The
excellent entertainment and admirable artis-
try here make Day’s death even more tragic
in retrospect.