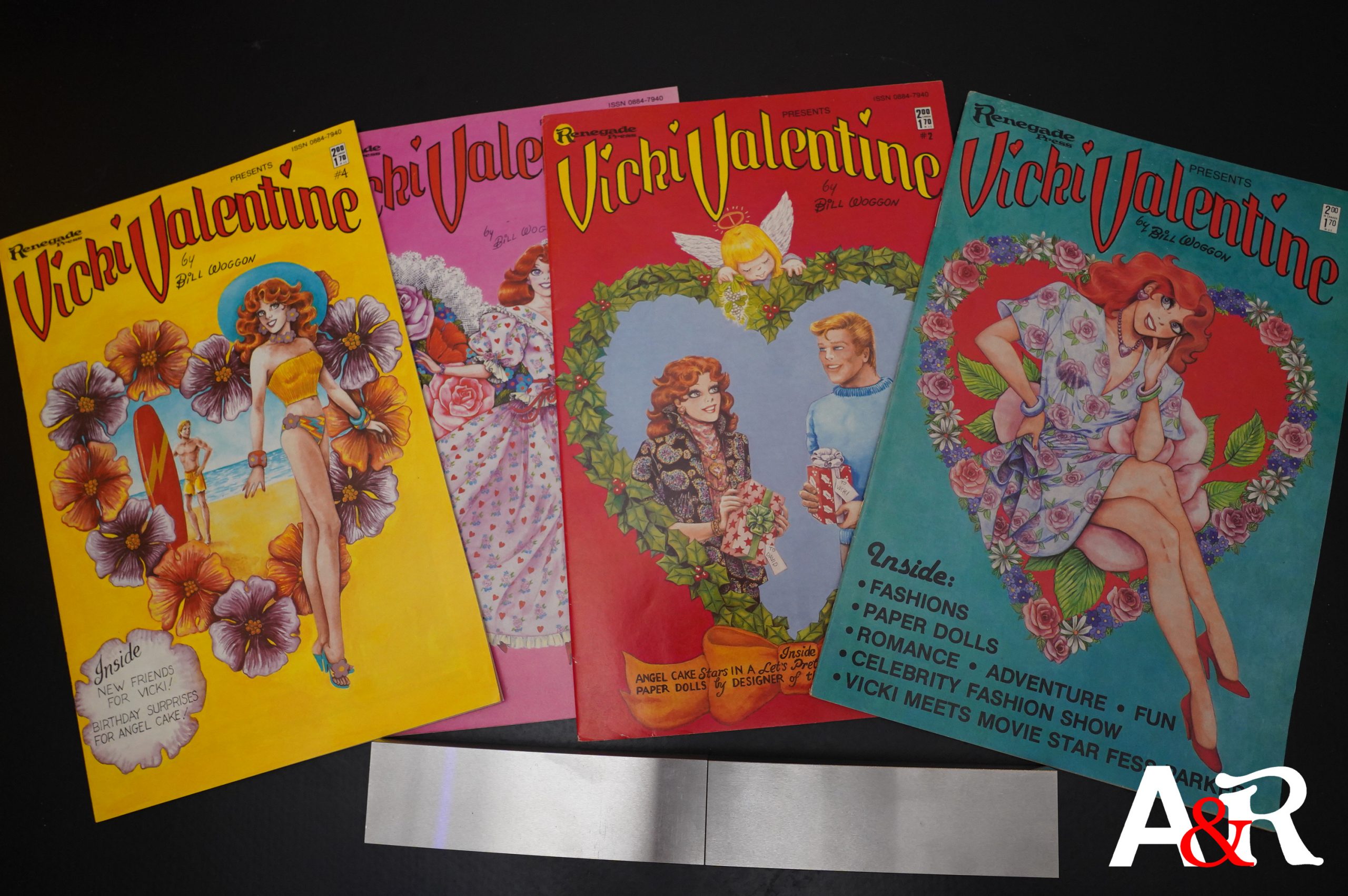 I definitely had this series as a teenager, but I don’t remember anything about it. Let’s read the first four pages: 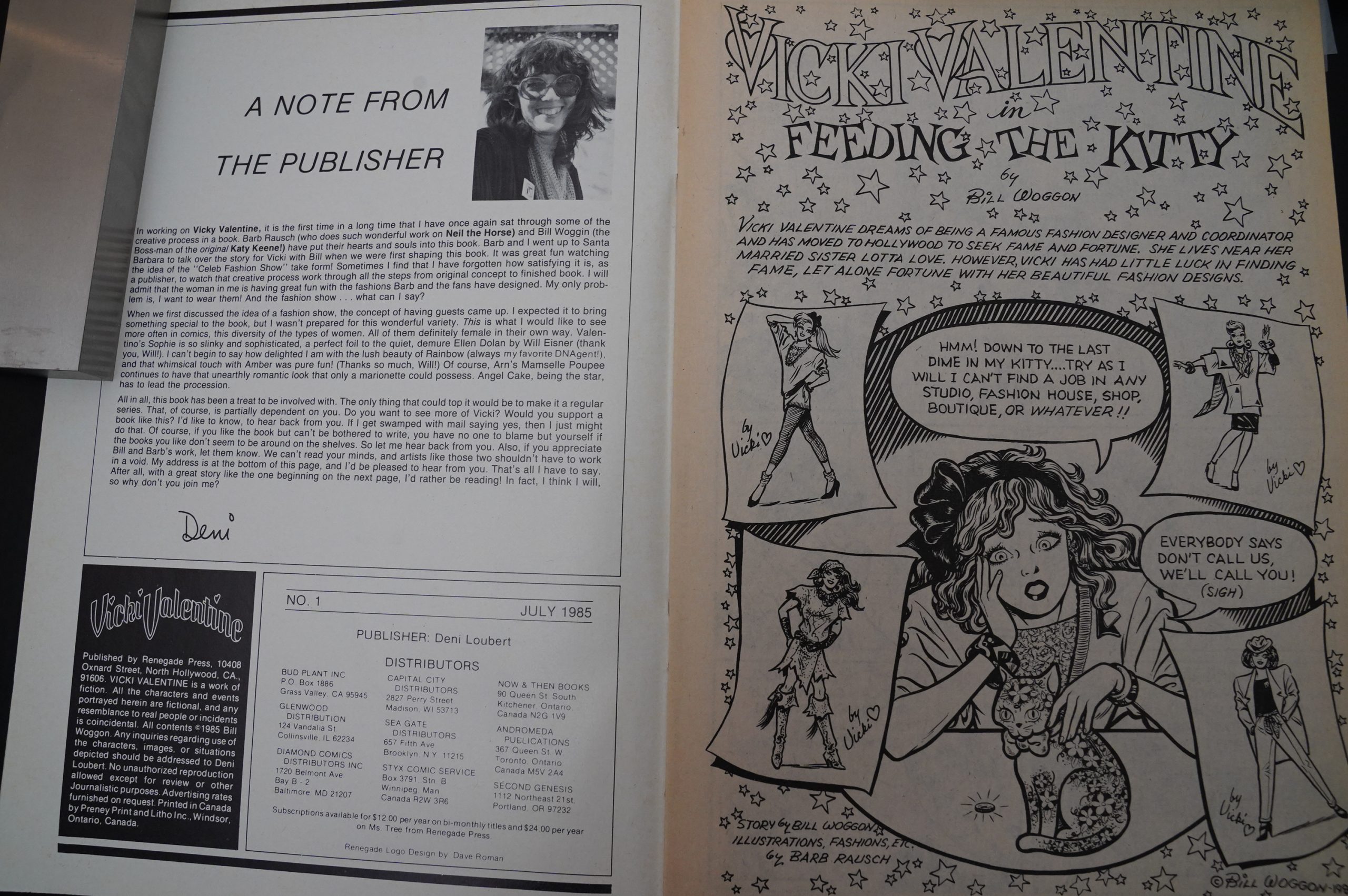 Oh, this was originally planned as a one-shot? But was expanded into a quarterly series, which I take to mean that the first issue sold pretty well? 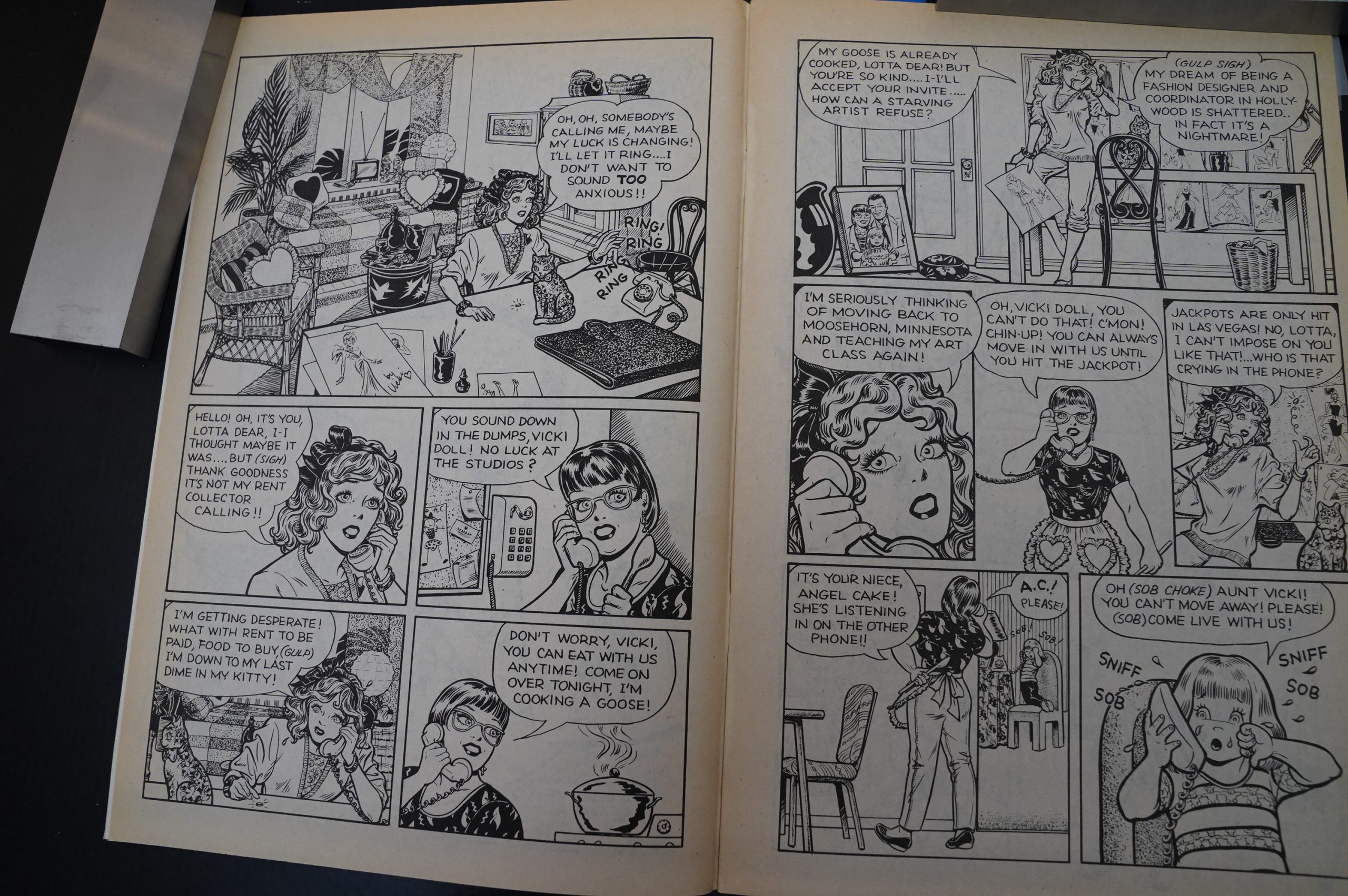 Oh my god, it’s so… it’s so pretty! I almost said “gorgeous” or “beautiful”, but I think “pretty” is the right word here. Just look at that top left panel: Everything is just perfect. I mean, the angles and perspective are somewhat off, and they’ve all got staring eyes as on dolls… but that just makes it even more perfect. It’s beyond perfect.

I’m sitting here with a stupid grin on my face, and that smile lasted all the way through the series. 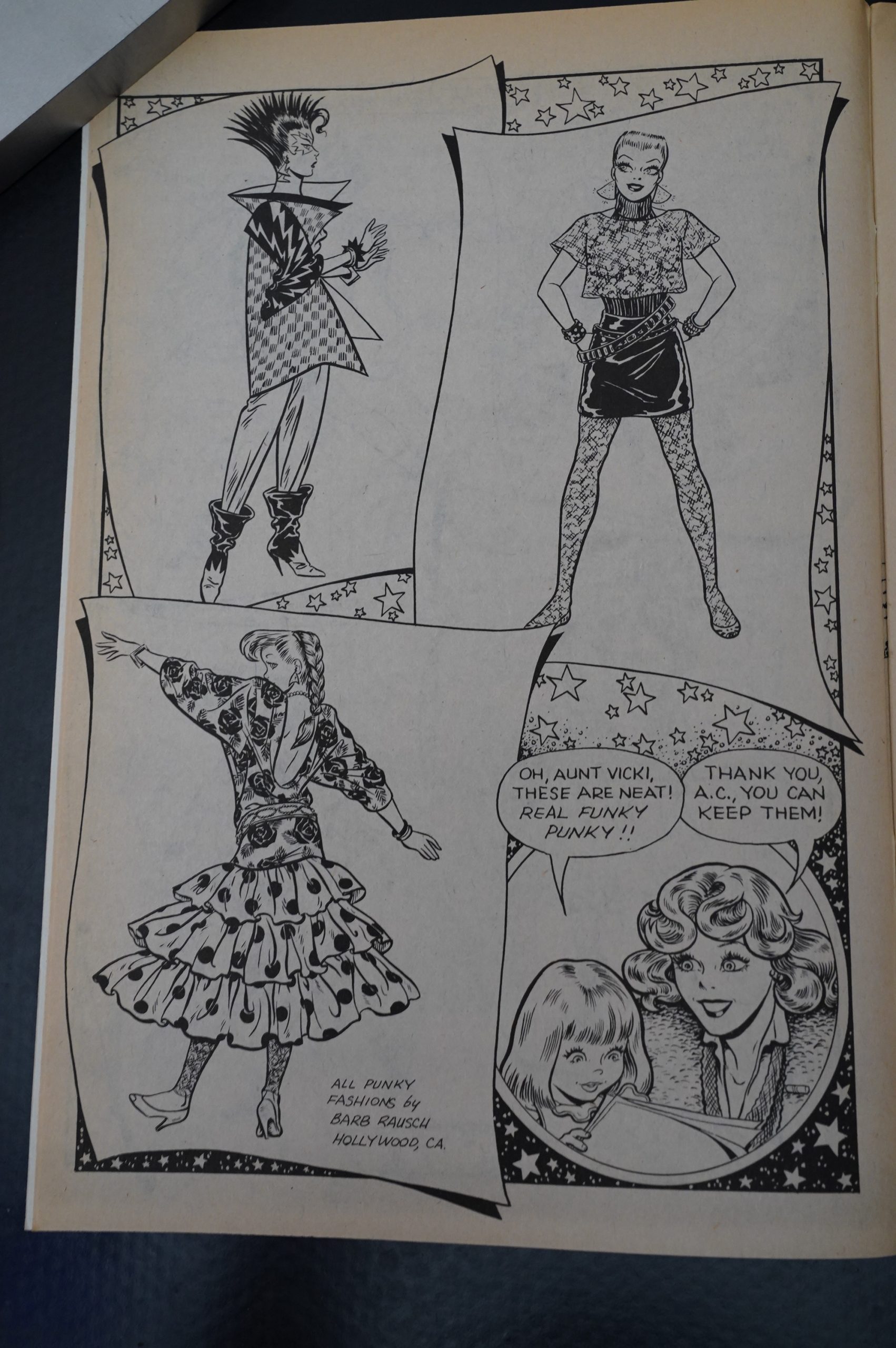 Vicki Valentine is written by Bill Woggon, the creator of Katy Keene, about which I know nothing. Let me google that for a second…

Ah, it was published by the Archie people:

Katy Keene was introduced in Wilbur Comics #5 in the summer of 1945, and appeared in subsequent issues of Wilbur and various anthology comic series in the 1940s including Archie, Jughead, Betty and Veronica and Ginger, eventually receiving her own title in 1949 which ran for 12 years. 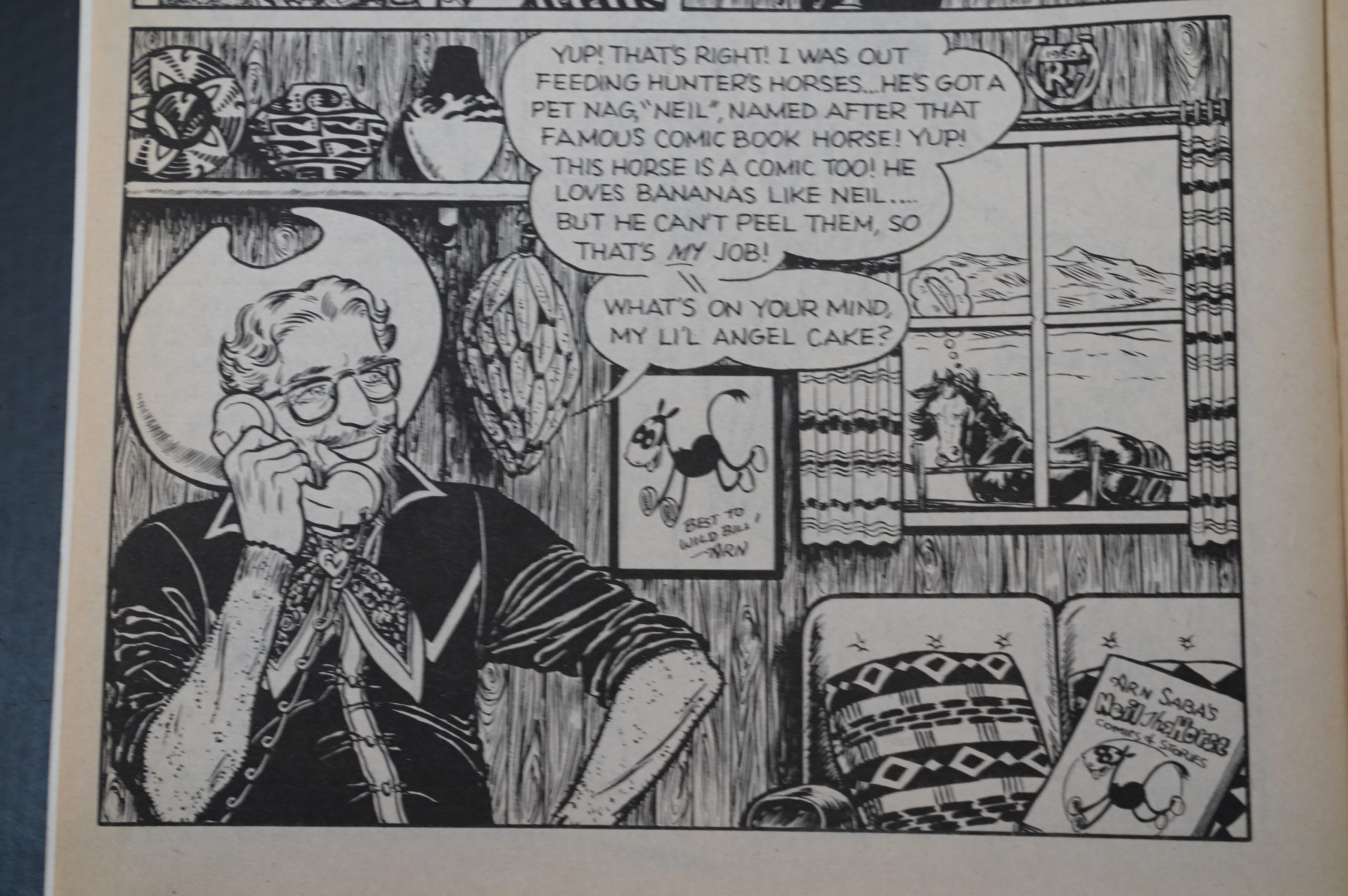 Isn’t that the prettiest cowboy shack ever?

The artist here is Barb Rausch, and I know her work from Neil the Horse (here in a cross-over panel sort of) and several other 80s romance comics. She seemed to be involved with all of them? But mostly as a background artist, I think? This is the only book of hers I can recall that’s done fully by her.

She should have done more, because the artwork here is delightful. 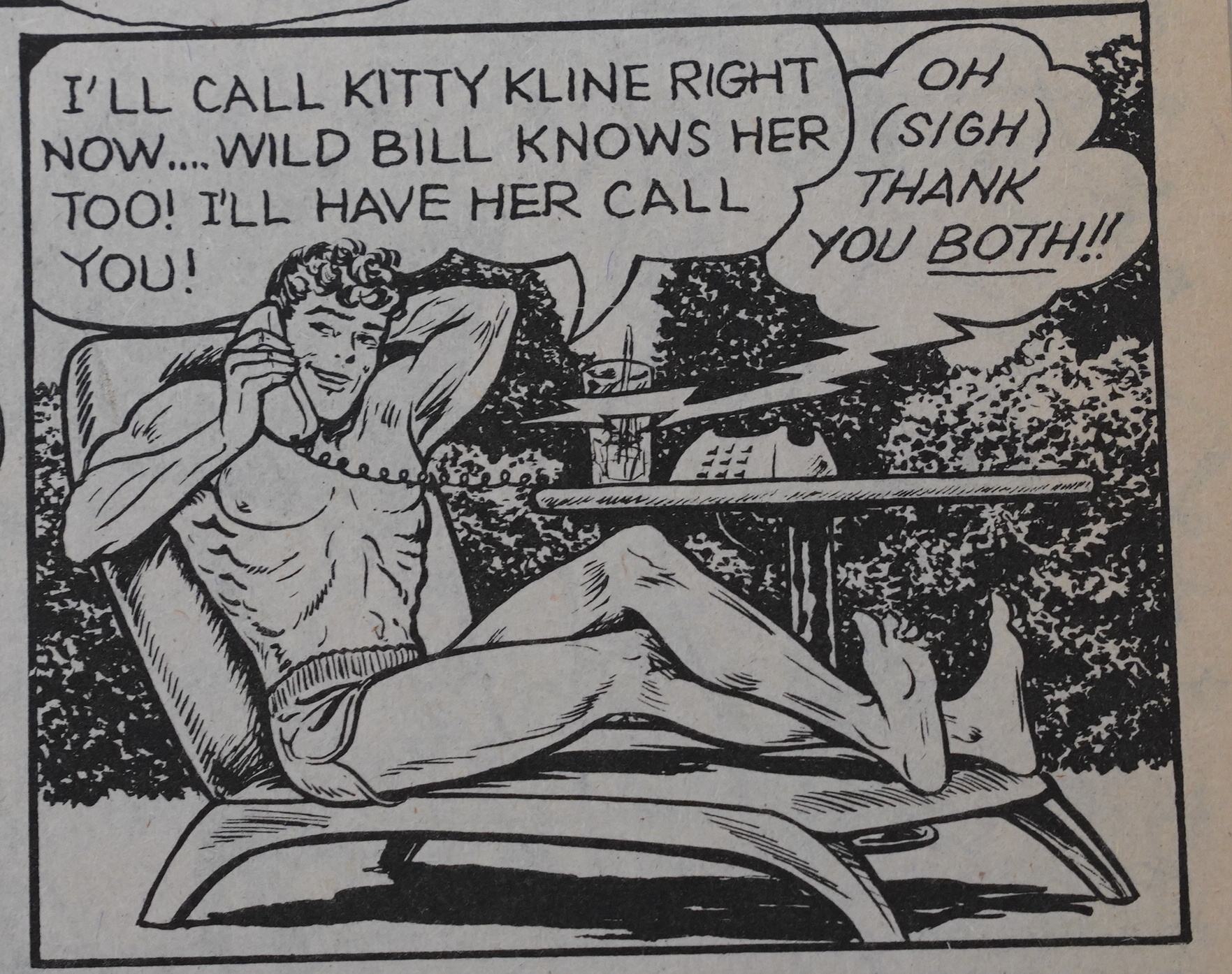 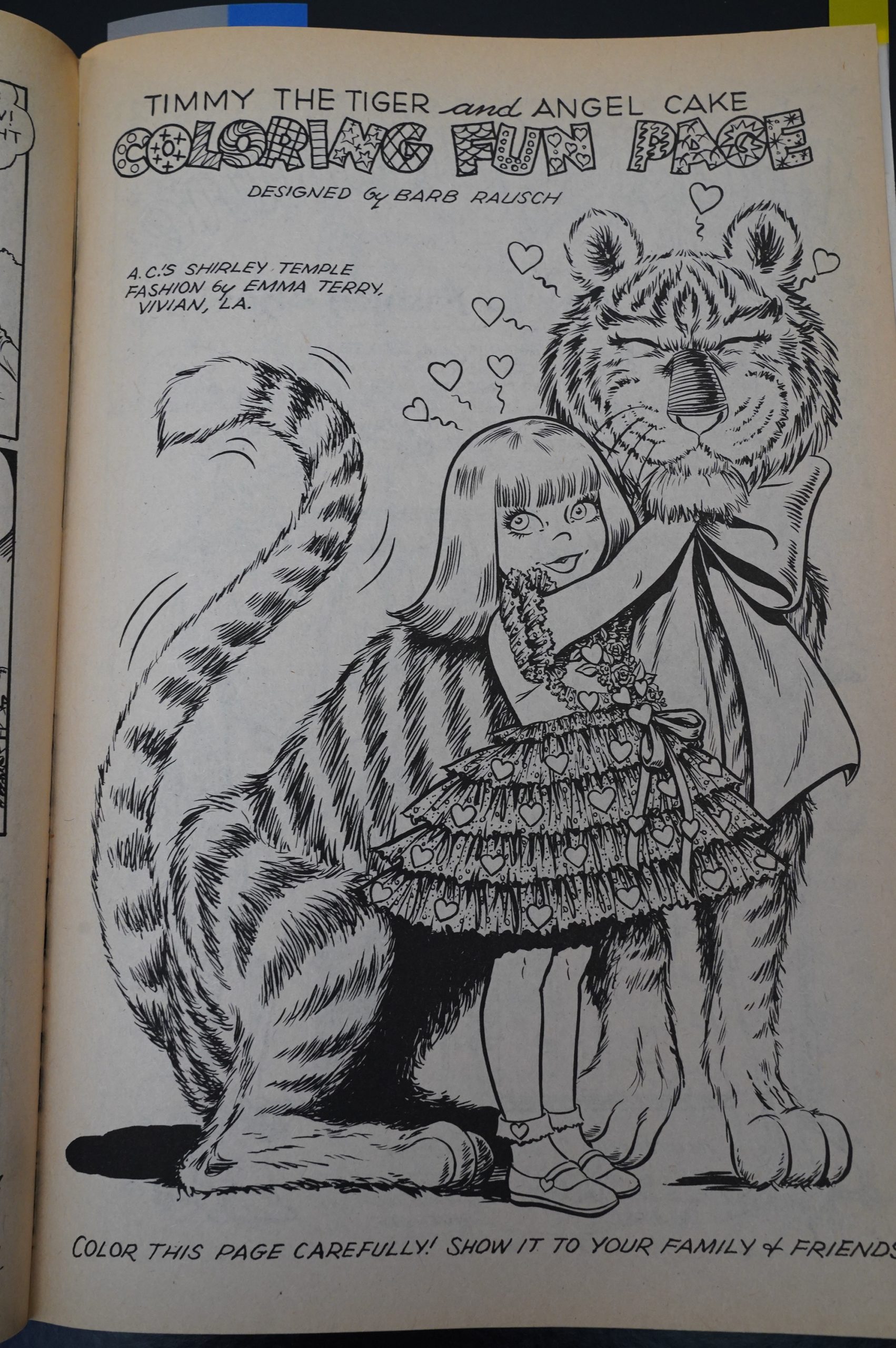 Now, this is a book aimed solidly at small children, so we get some colouring pages, of course. 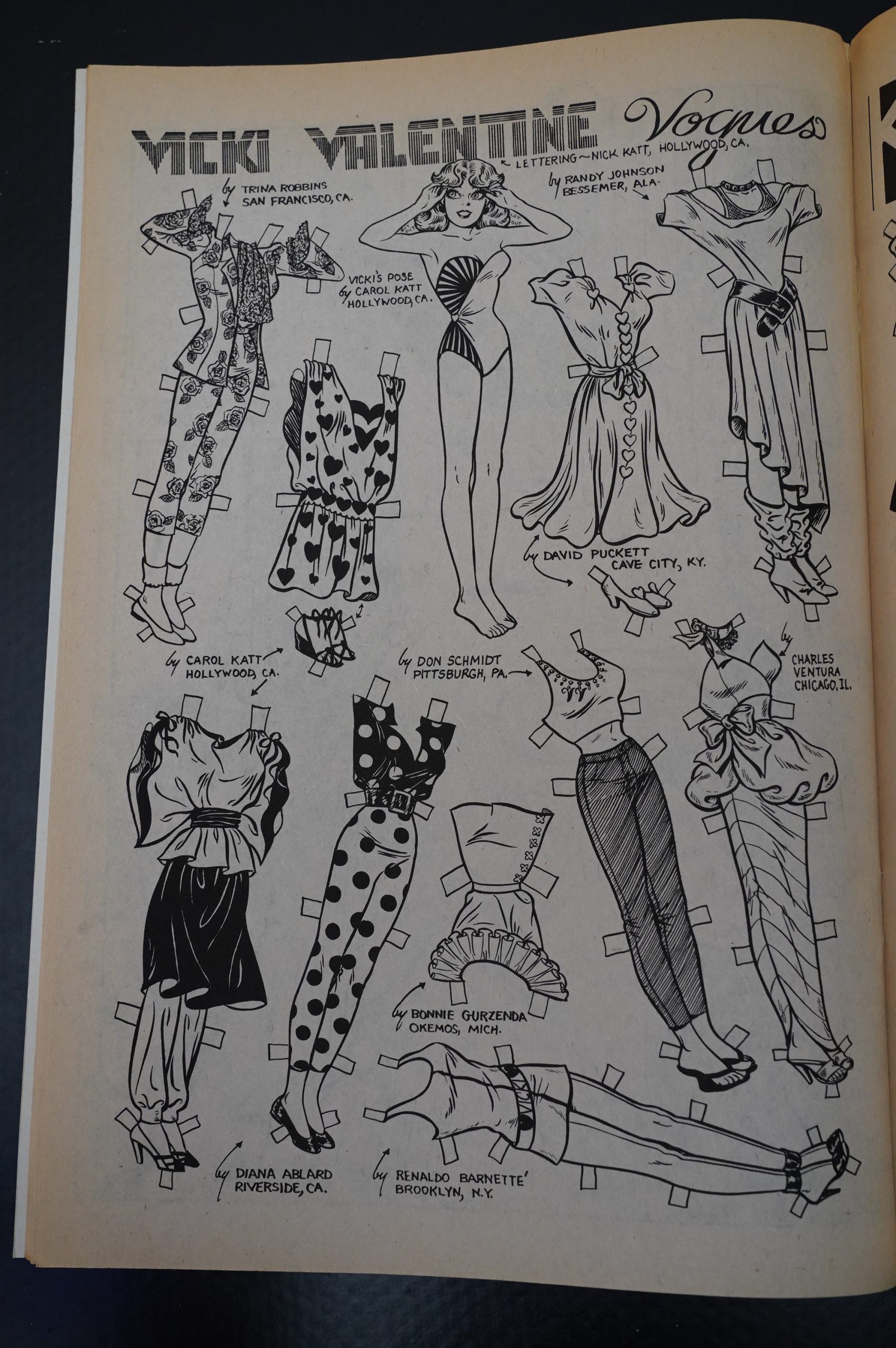 And paper dolls to cut out. (Pretty thin paper here, but I guess you can glue more solid paper to it…) 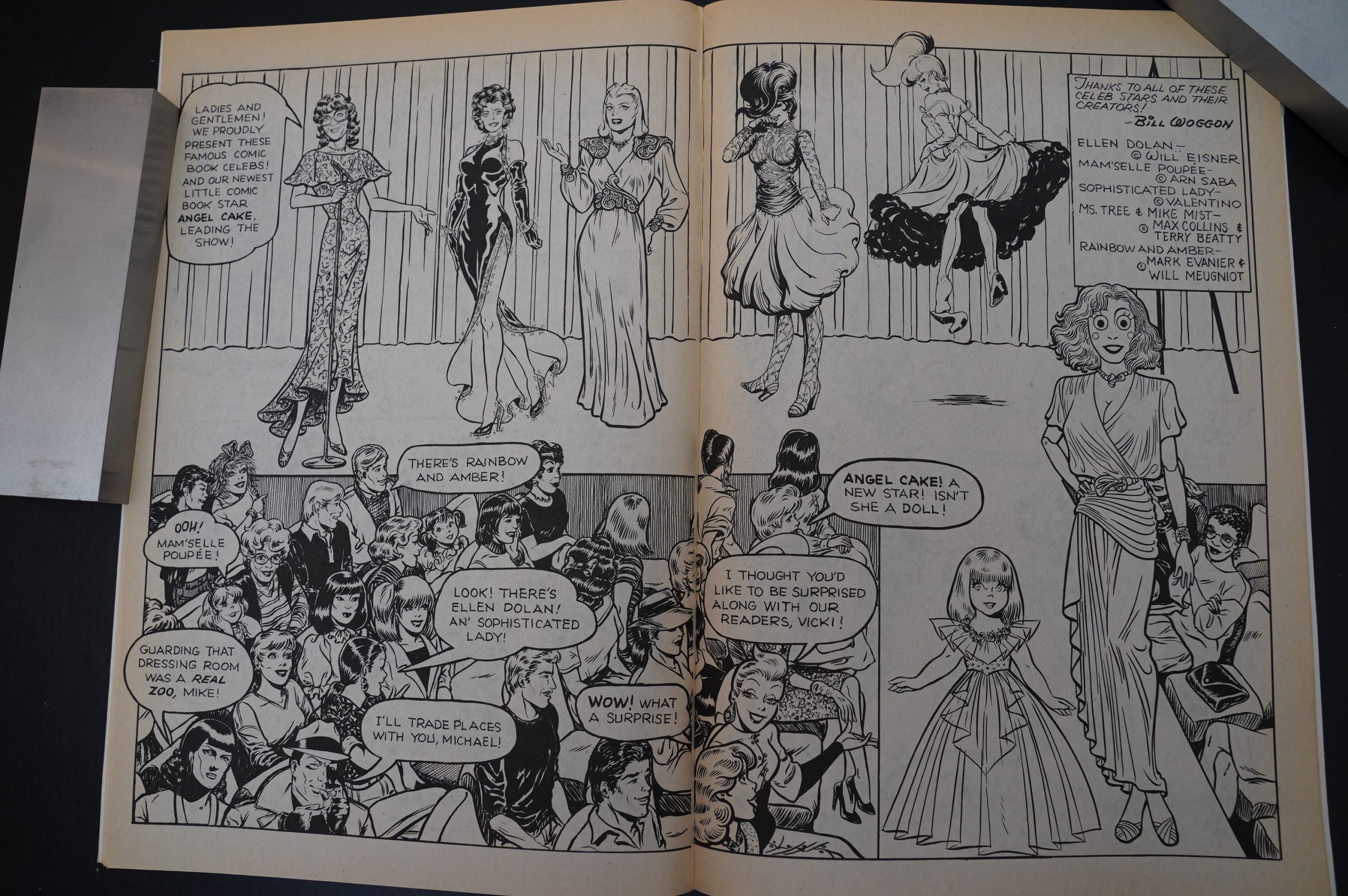 And a fashion show with famous characters. 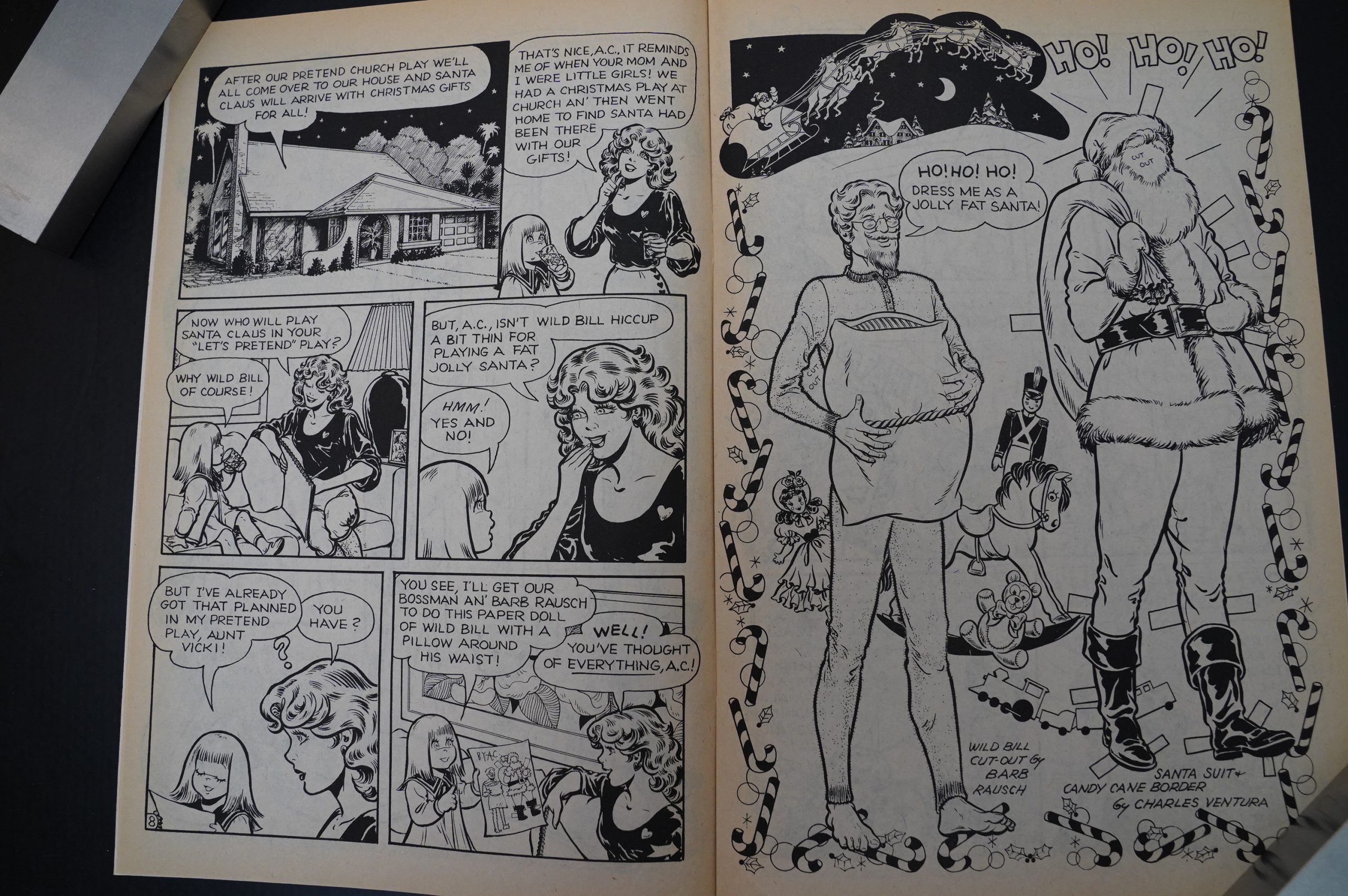 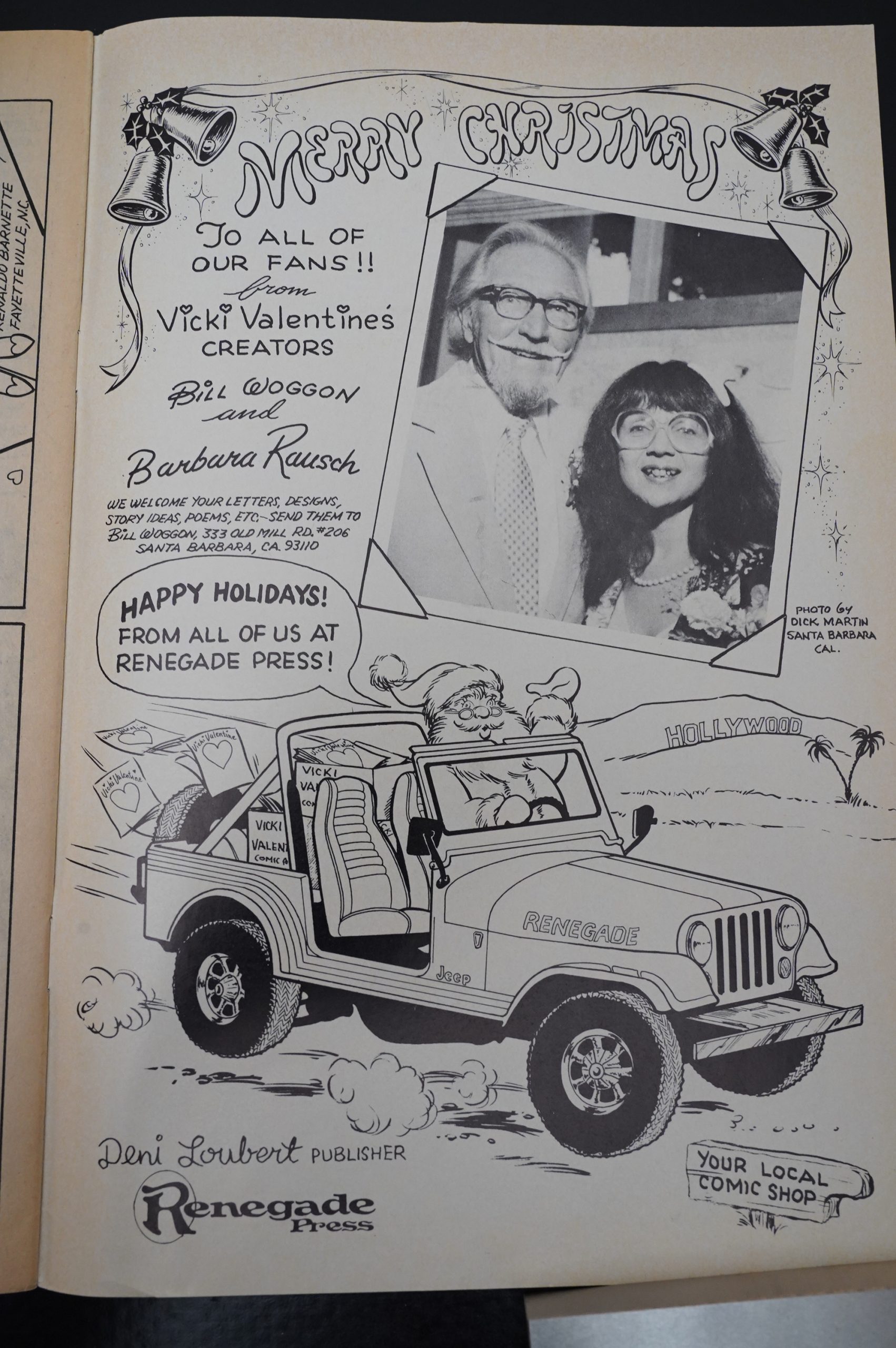 Barb Rausch died in 2001. I’m trying to find the article that was written after her death, but I just can’t find it. I vaguely remember it being written by her friend (and fellow romance comics enthusiast) Trina Robbins about visiting her at home, and trying to whip up some food in her kitchen. When she switched on the over, Rausch came running and quickly switched it off, because she stored the overflow of her doll collection in the oven. 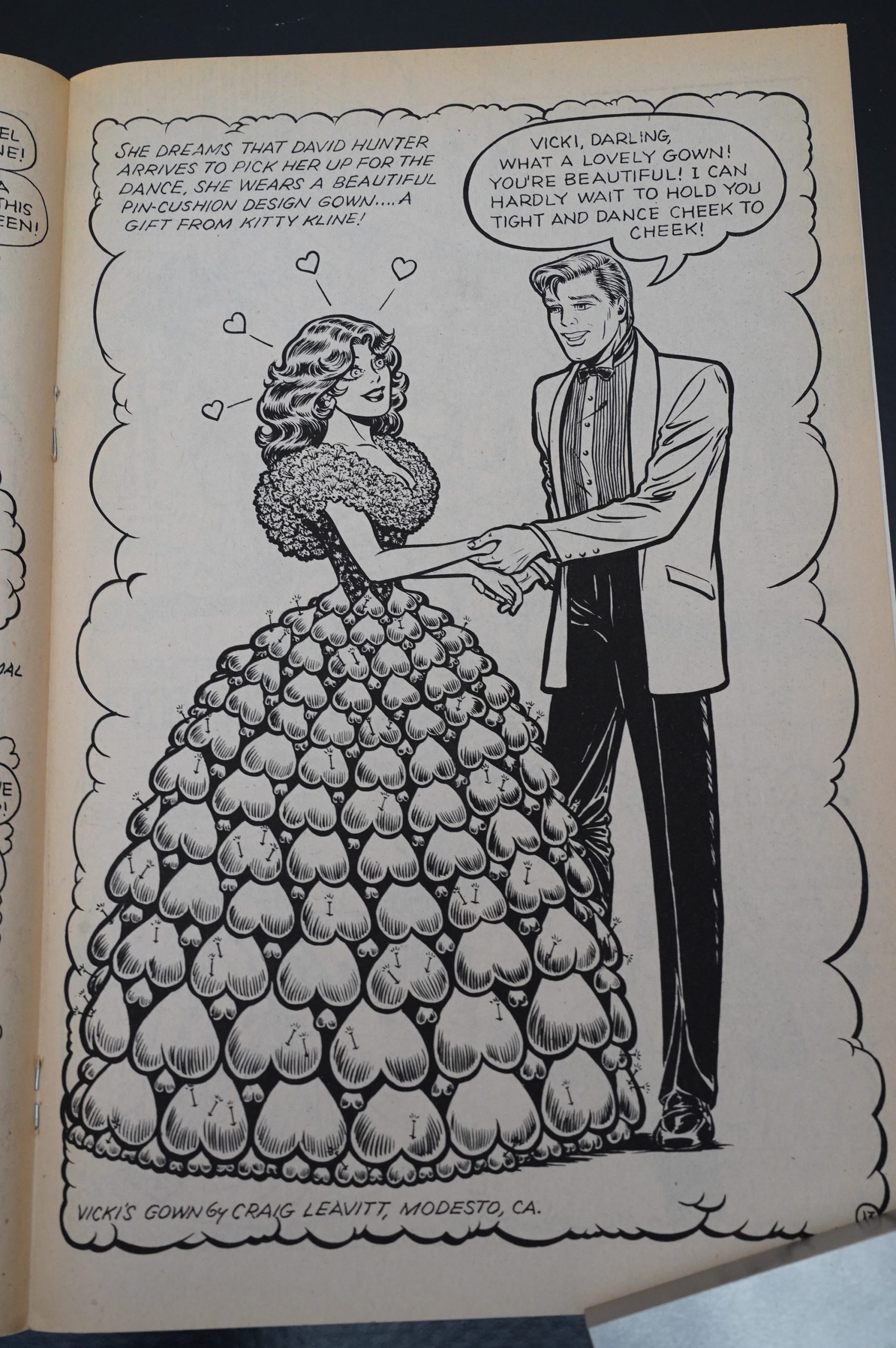 Readers submit ideas for dresses… and… er… most of them are good or fun, bit this one is a bit… unfortunate? 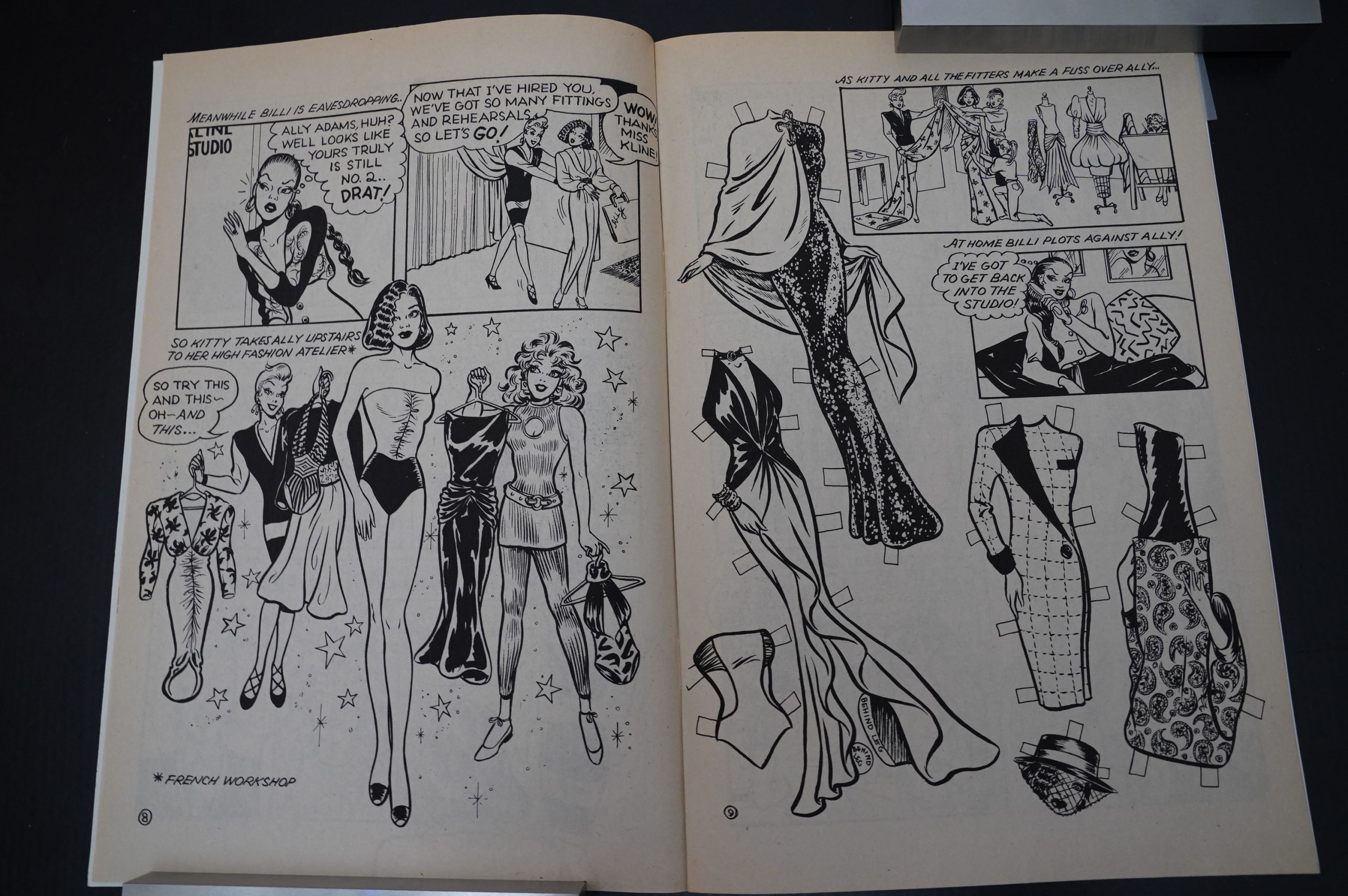 Finally! Integrating the paper dolls into the storylines makes a lot of sense. 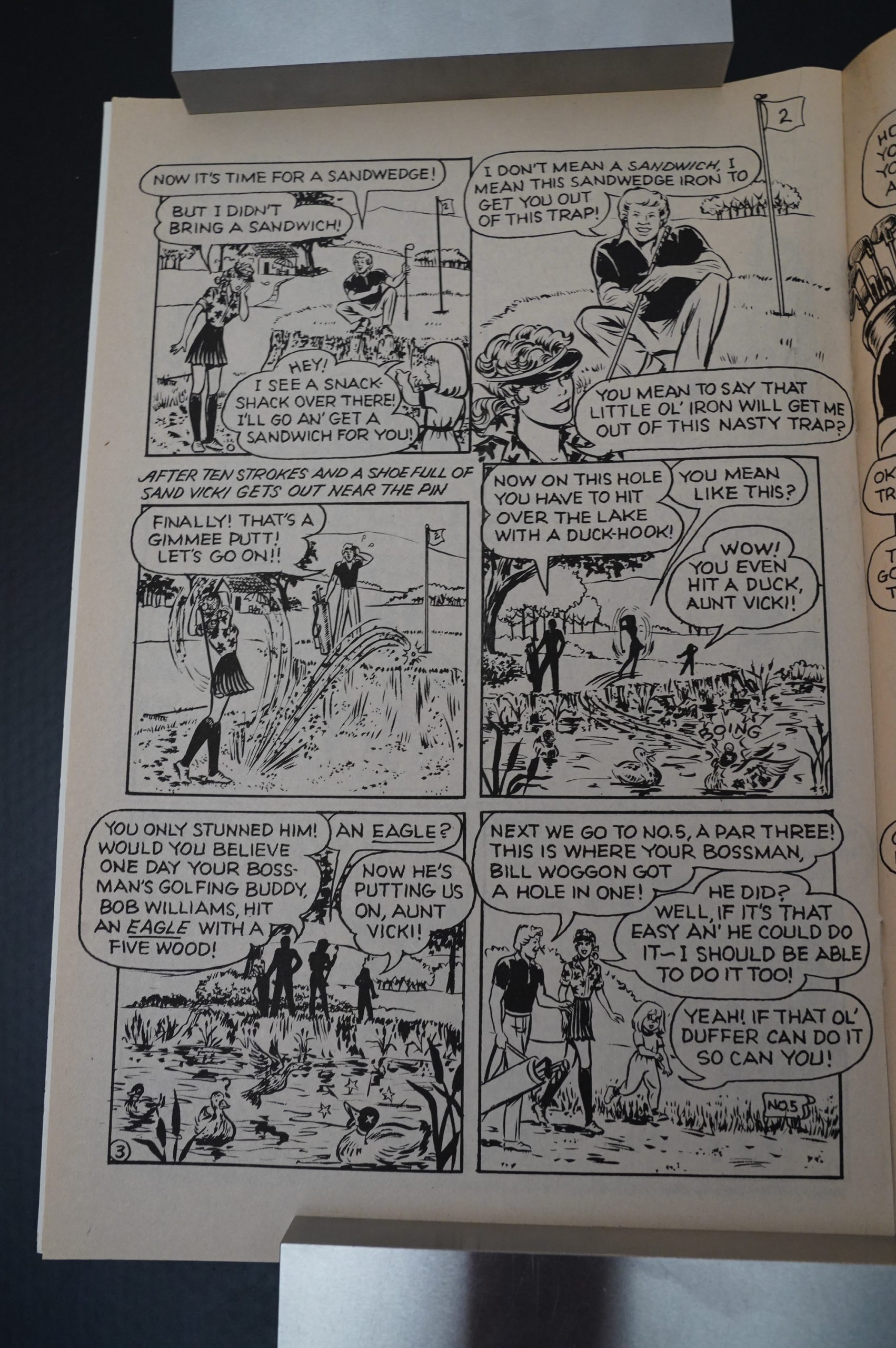 All the stories are a breeze, except this one. Bill Woggon is a golf enthusiasm, and tries to smuggle that into the series here, and… well…

Otherwise! This is such a delight to read. It’s just such a pleasure to look at Rausch’ artwork, and the stories are a breeze…

The series was cancelled after the fourth issue.

VICKI
VALENTINE
Written by BILL WOGGON; illustrated by
BARB RAUSCH
32 black-and-white pages on newsprint;
$1.70; direct-sales distribution; published
quarterly by RENEGADE PRESS
Forget about Boy George and Prince,
forget about Madonna, Joan Collins
and the Wasp. When it comes to
fashion plates, Vicki Valentine is where
it’s at. And she’s a real don, too—paper
doll. anyway. Vicki #4 is the Summer
Fun issue, featuring a salute to Lady
Liberty’s 100th birthday. an event which
includes a guest appearance by Morrie
Turner’s Wee Pats, as well as a whop-
ping big birthday cake. We also meet
Angel Cake’s A.G.-—Adoring Grandma,
that is.
Then, alas, Vicki will go on an in-
definite hiatus, though it’s possible that
there will be future book-sized collec-
tions of Vicki paper dolls. Fashion will
out, after all.
—HMacD—

These books have unfortunately never been reprinted, but you can still pick them up pretty cheaply:

As a young teenager,
Rausch had been one of those
fans who sent in designs to
Katy Keene comics, and
whose designs were used by
Katy Keene creator Bill
Woggon, who even selected
her to be Designer Of the
Year. She never stopped being
a fan of Bill Woggon, and in
1986, she collaborated with
him on four issues Of Vickie
Valentine (Renegade press)
one of many attempts in the
1980s by various artists, all
unsuccessful, to revive girls’
comics. During this same
period, She also penciled a
number Of stories for my own
unsuccessful attempt to
revive girls’
comics,
California Girls, (Eclipse)
which lasted all Of eight
issues, and for Arn Saba’s
beautiful series, Neil the
HO rse.
While Rausch’s drawing
style — she was probably the
“girliest” of all the girl car-
toonists — worked beautiful-
ly with the above-mentioned
indie books, and with others
as diverse as Joshua
Quagmire’s Cute)’ Bunny, the
all-woman
anthology
Wimmen} Comix and the
benefit
AIDS
book,
StripAIDS USA, there was
little place for her in the grim
n ‘ gritty testosterone world
of 1980s mainstream comics,
although she did contribute
to the 1989 all-woman
Wonder Woman special.