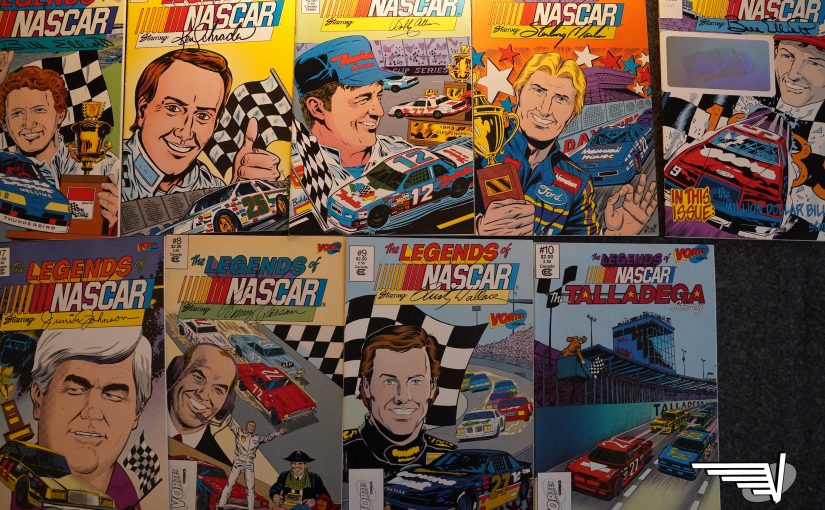 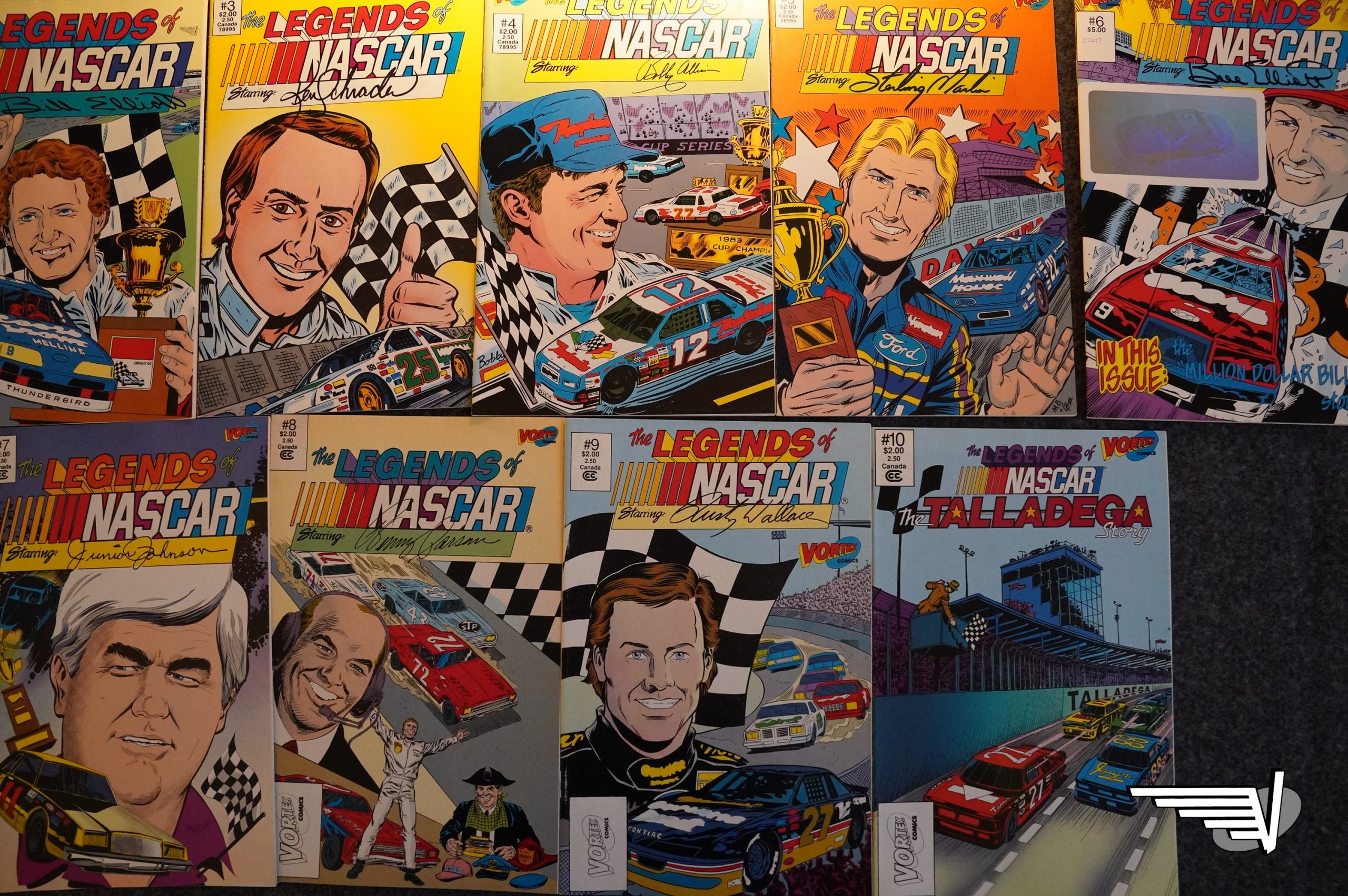 Yes, if you’ve been reading this blog series from the start (and if you have… why?), that’s what you’re saying now.

“WHAT THE FUCK! I CAME HERE FOR YUMMY FUR AND OTHER COMICS ABOUT PENIS MUTILATION! WHAT”S THIS SPORTS SHIT!”

In the most shocking turnabout possible for a publisher, Bill Marks started publishing NASCAR comics. But this isn’t as strange as it may seem: Remember, Bill Marks is something of a cheery huckster (at least that’s how he comes off in interviews), and making money is surely something a huckster should try to do? I mean, instead of publishing art comics like Paradax!, Nocturnal Emissions and Yummy Fur?

And besides, Bill Marks did some NASCAR driving himself for about a year? I think? Or was it some other kind of racing? I swear I’ve read that he did racing for a while, but now I can’t find it…

I was kinda excited to get to this part of the blog series, because I was just curious what these comics were going to be like. Would the publisher of Black Kiss do some kind of avant-garde brain meltdown take on NASCAR, or would it be a simple cash grab, where he gets the cheapest artists available to just churn out some shit?

Let’s read the first four pages of the first issue. 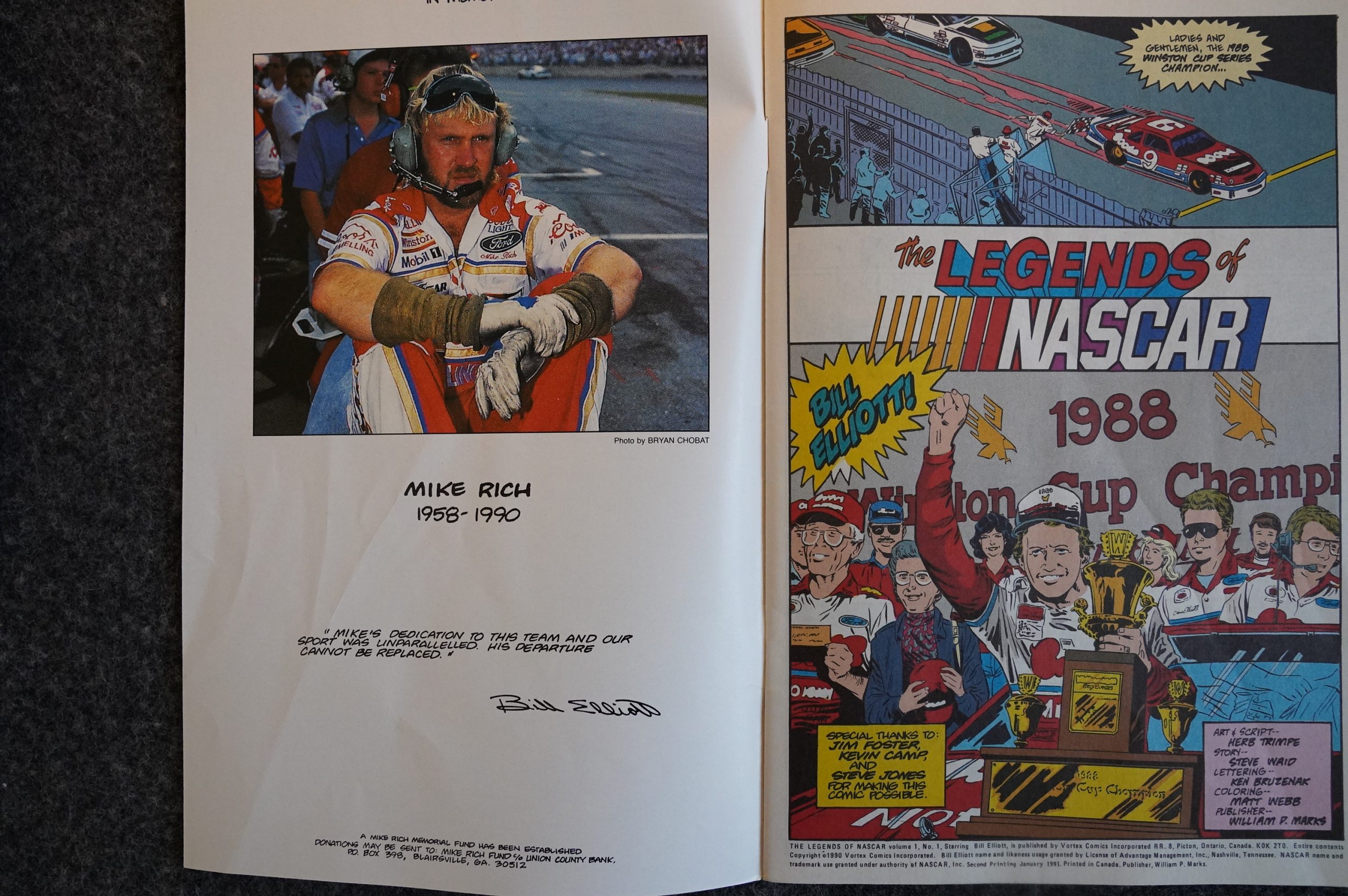 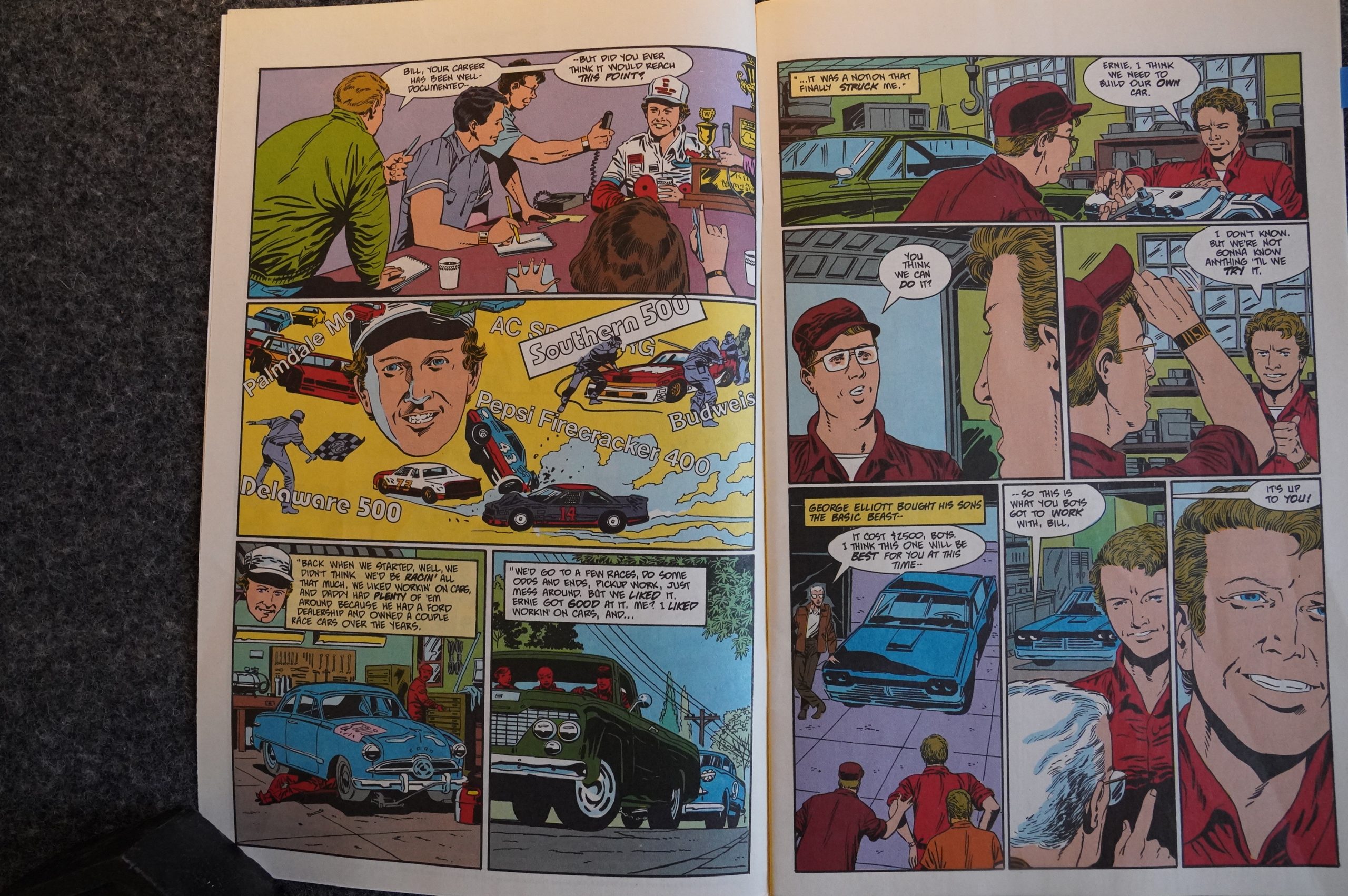 Well. Somewhere in between? Herb Trimpe is a veteran illustrator… so I’m sure Marks could have found somebody cheaper? And, no, these comics aren’t exciting: They’re totally lame. 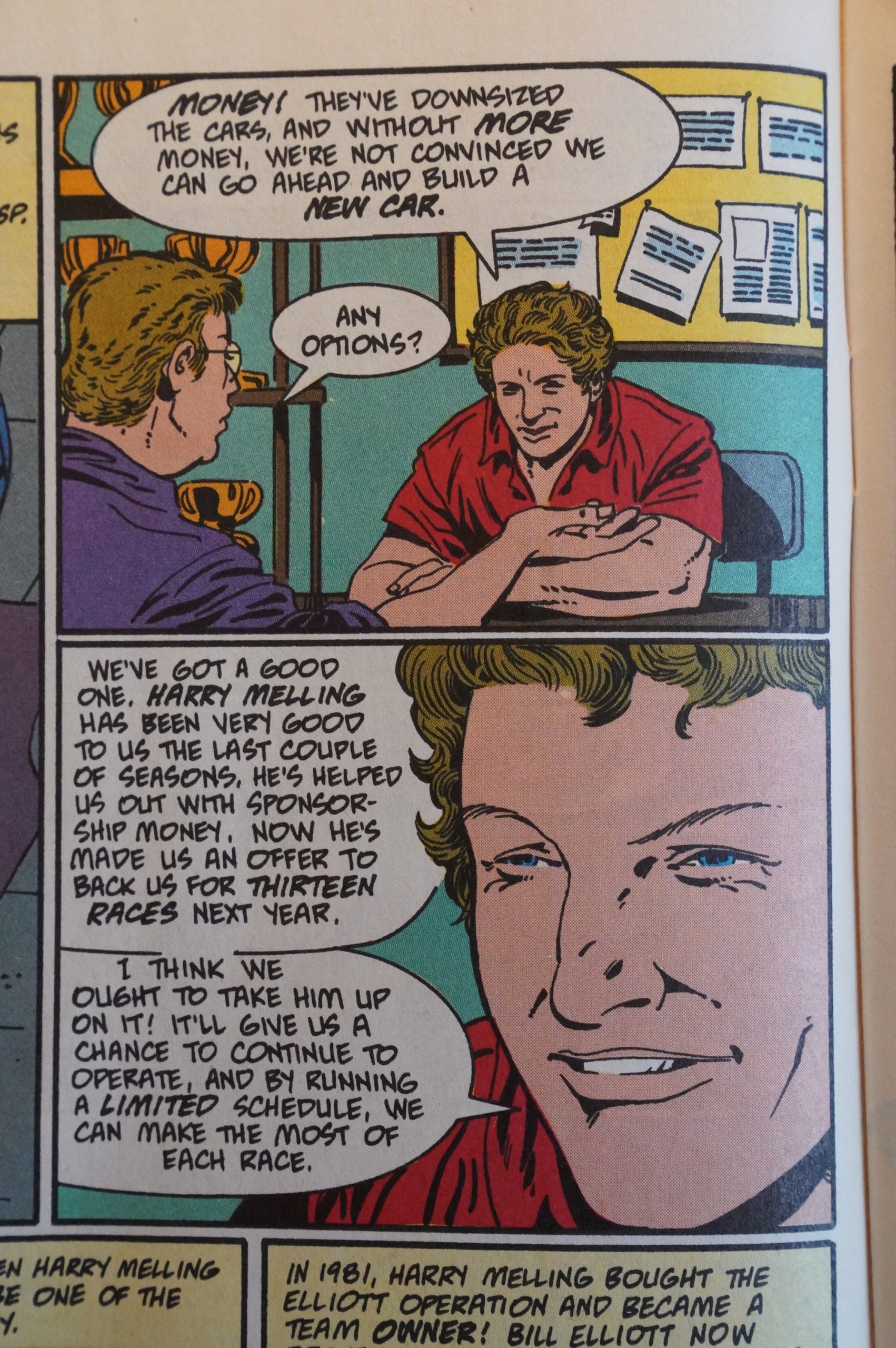 The first few issues are the “origin story” of some driver or other: About how they grey up wanting to drive cars, and then they drove cars. 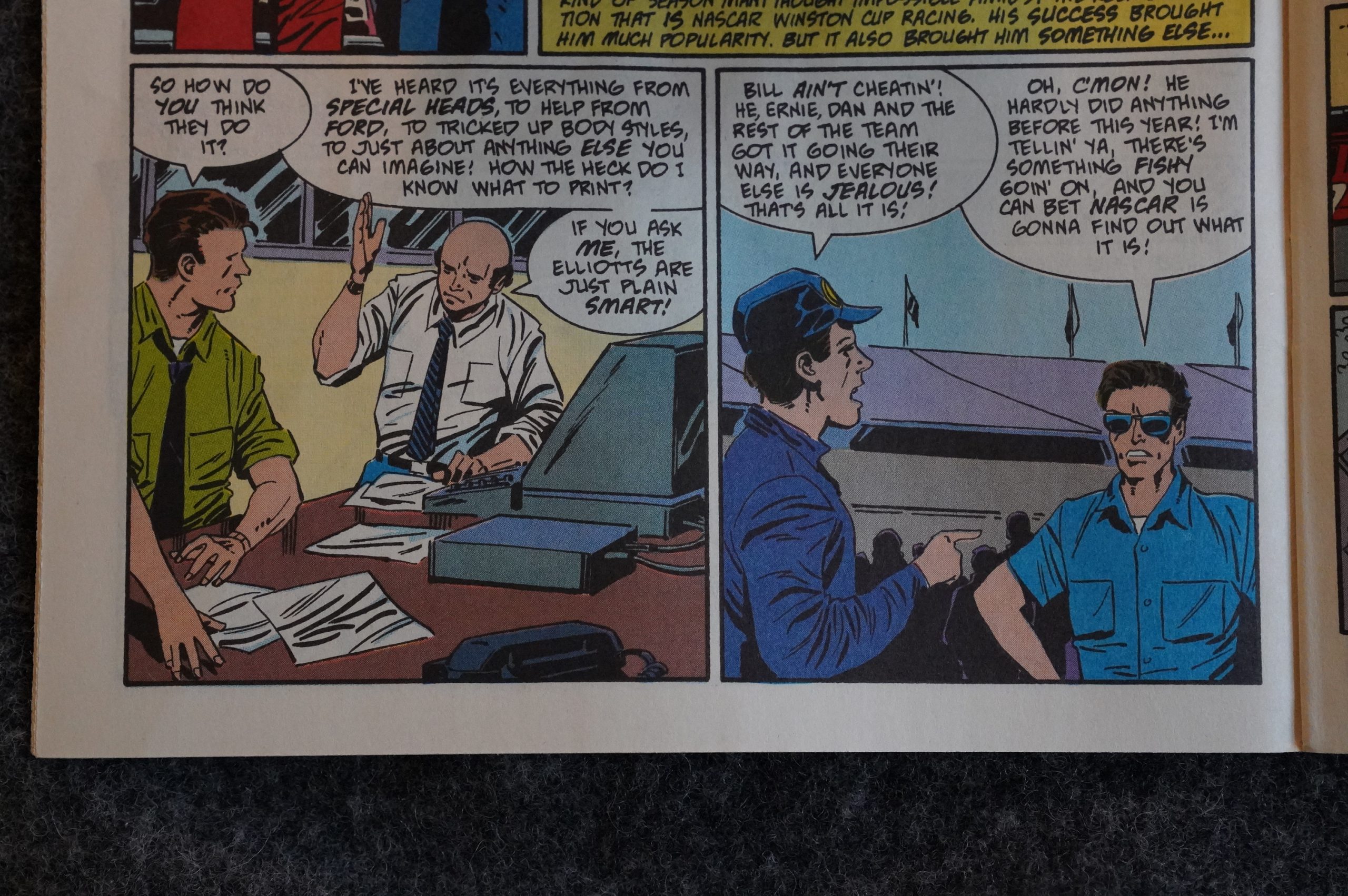 Sometimes there’s a slight hint at some drama (these guys are just shocked that Bill Elliott is as good as he is), but that’s as far as it goes: It’s really dreary reading. I mean, I guess Elliott’s family would enjoy reading this? Perhaps his friends? I’m finding it hard to believe that even his fans would, because it’s just so … flat. 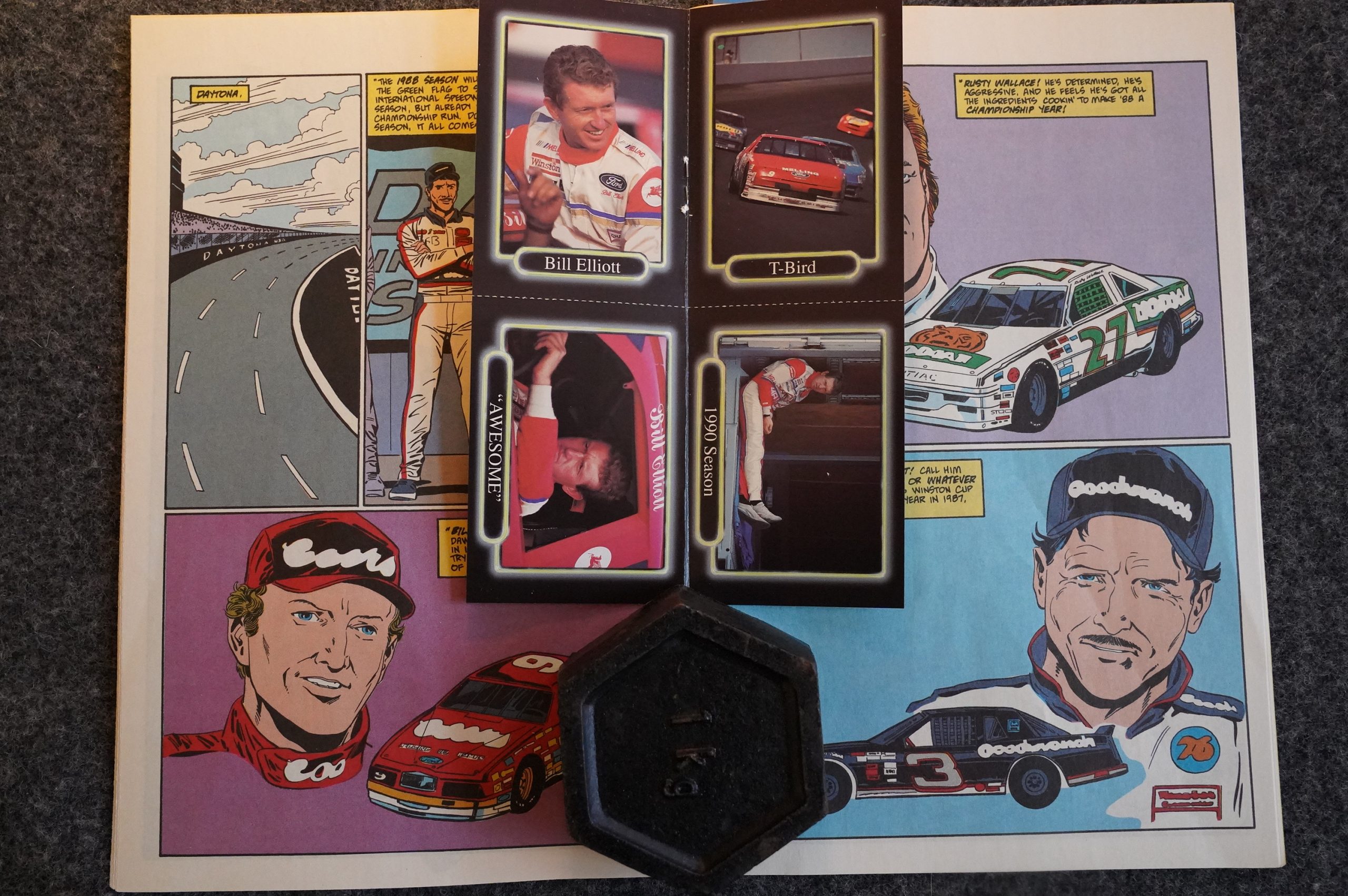 But at least there’s trading cards. 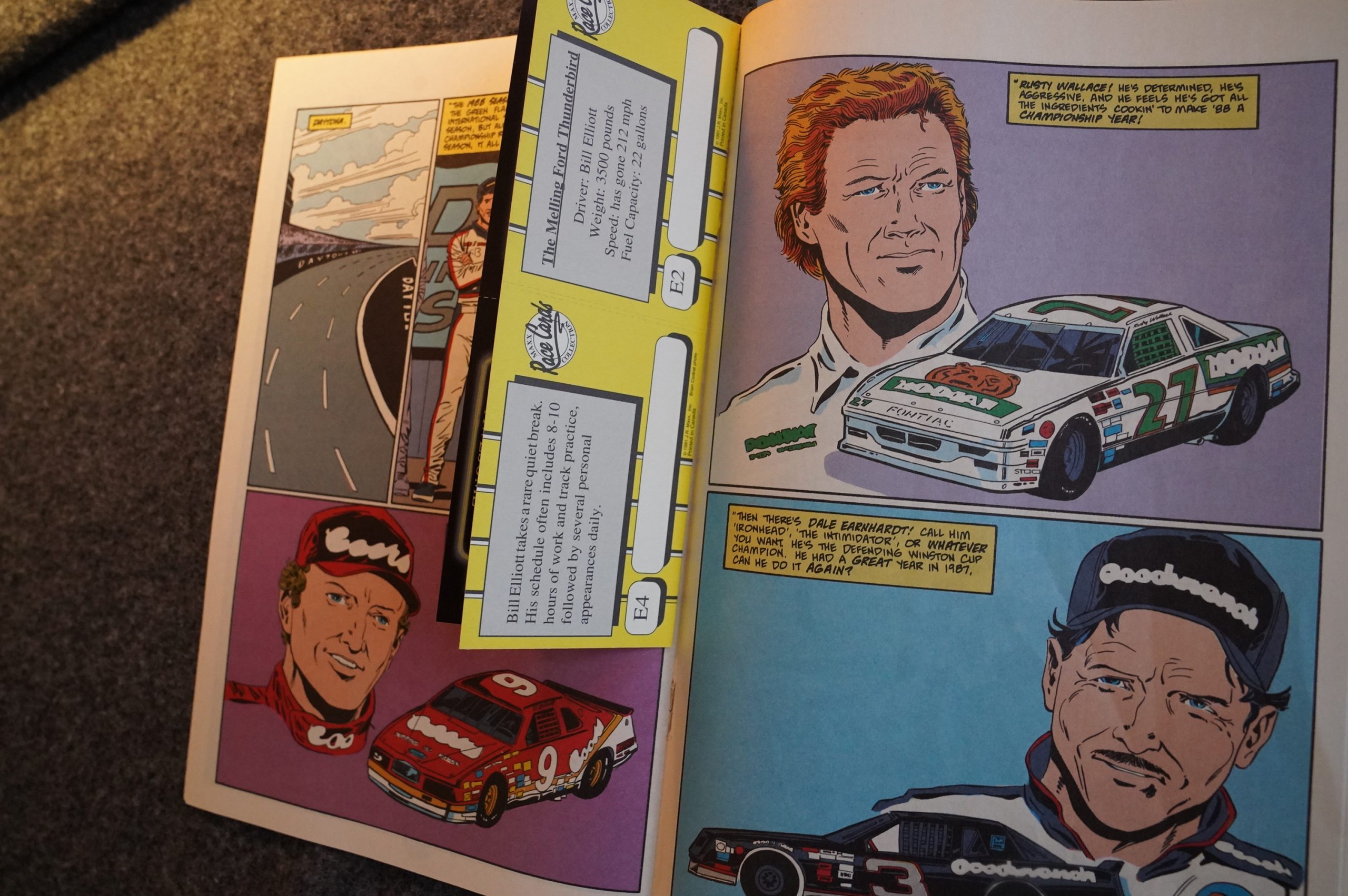 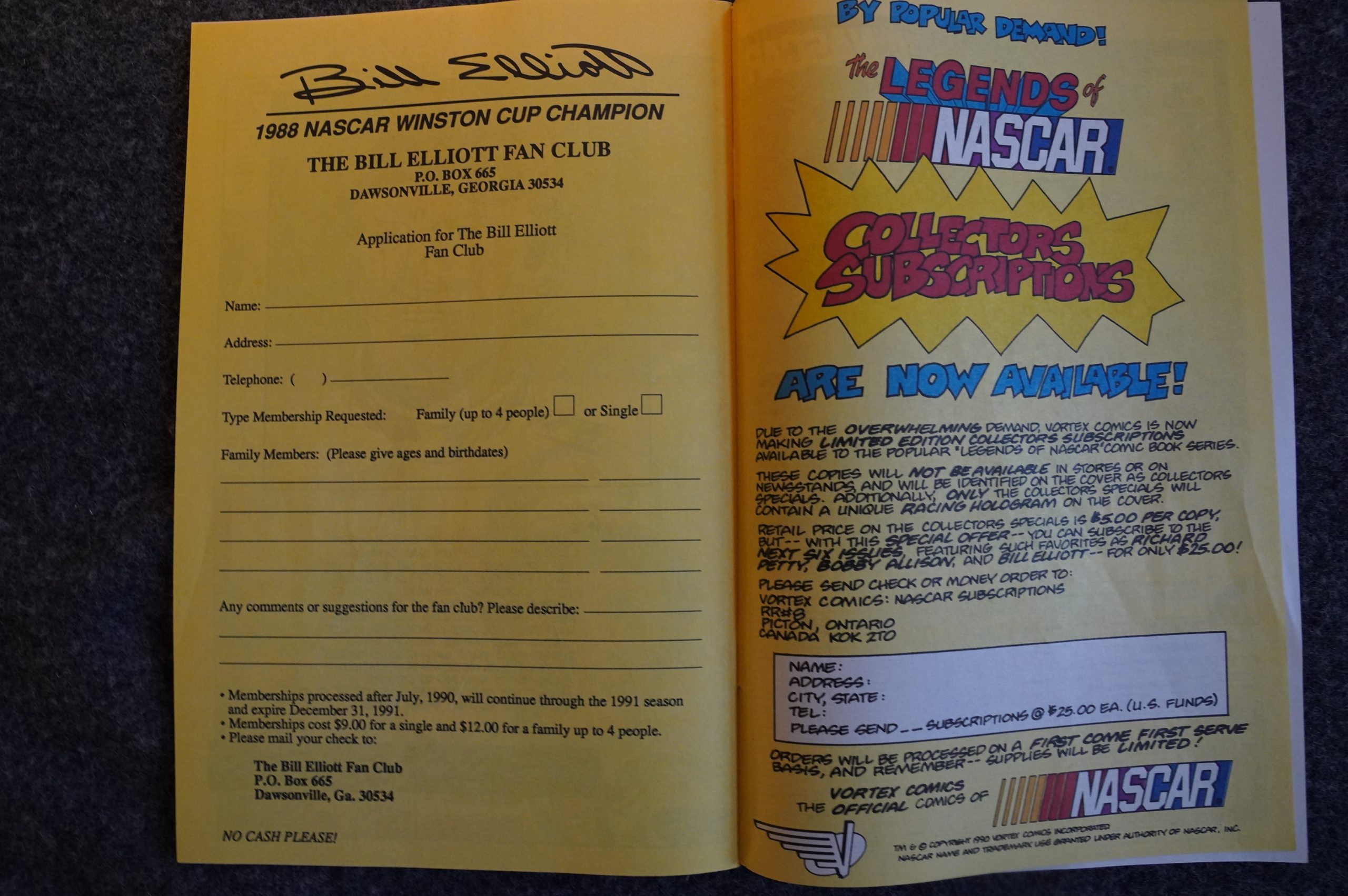 Join the Bill Elliott fan club! And you can also subscribe to the collector editions of this series, which has holograph foil things. “By popular demand”. 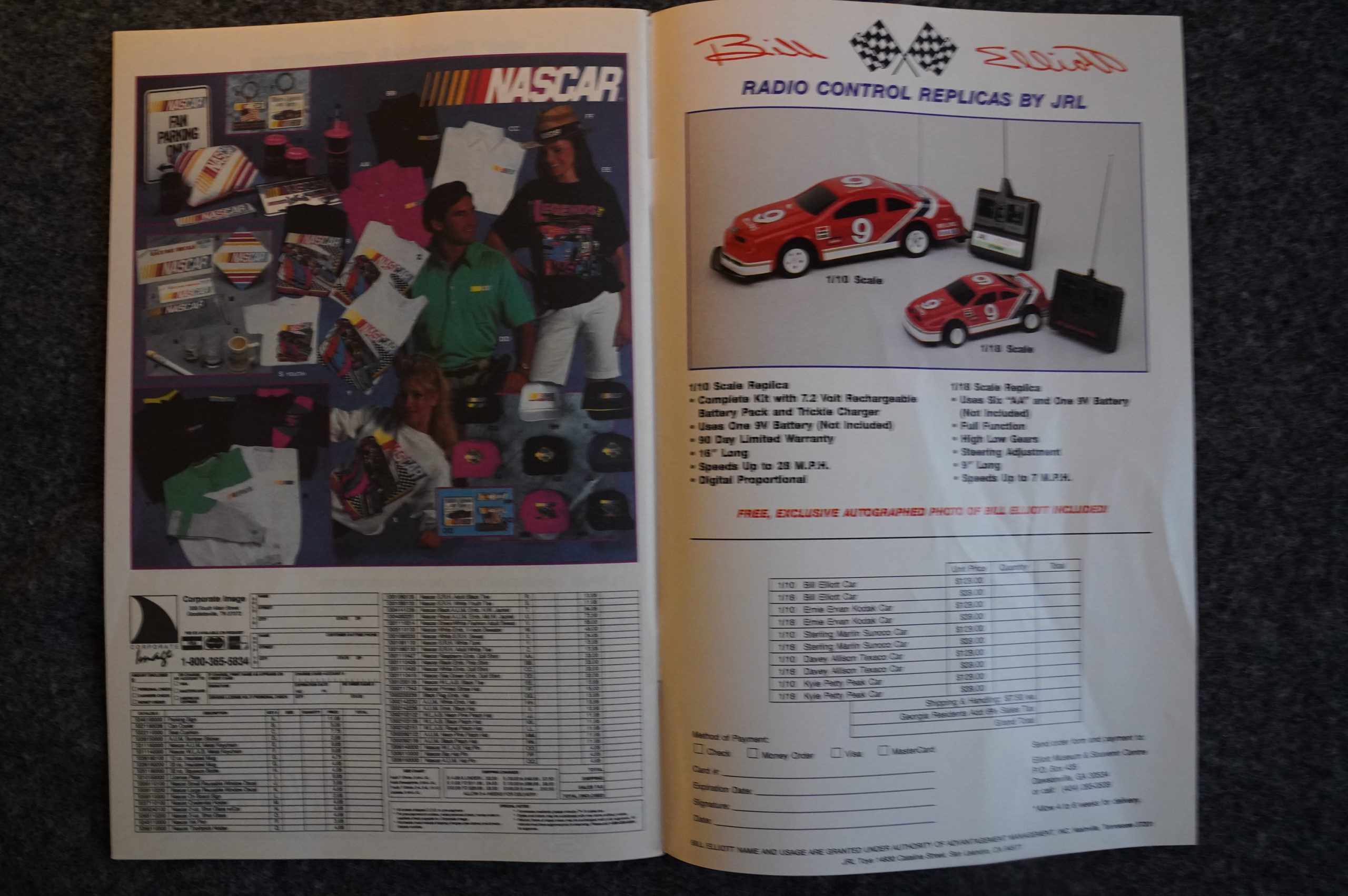 And you can get officially licensed 8×10″ portraits of the divers. Looks great. 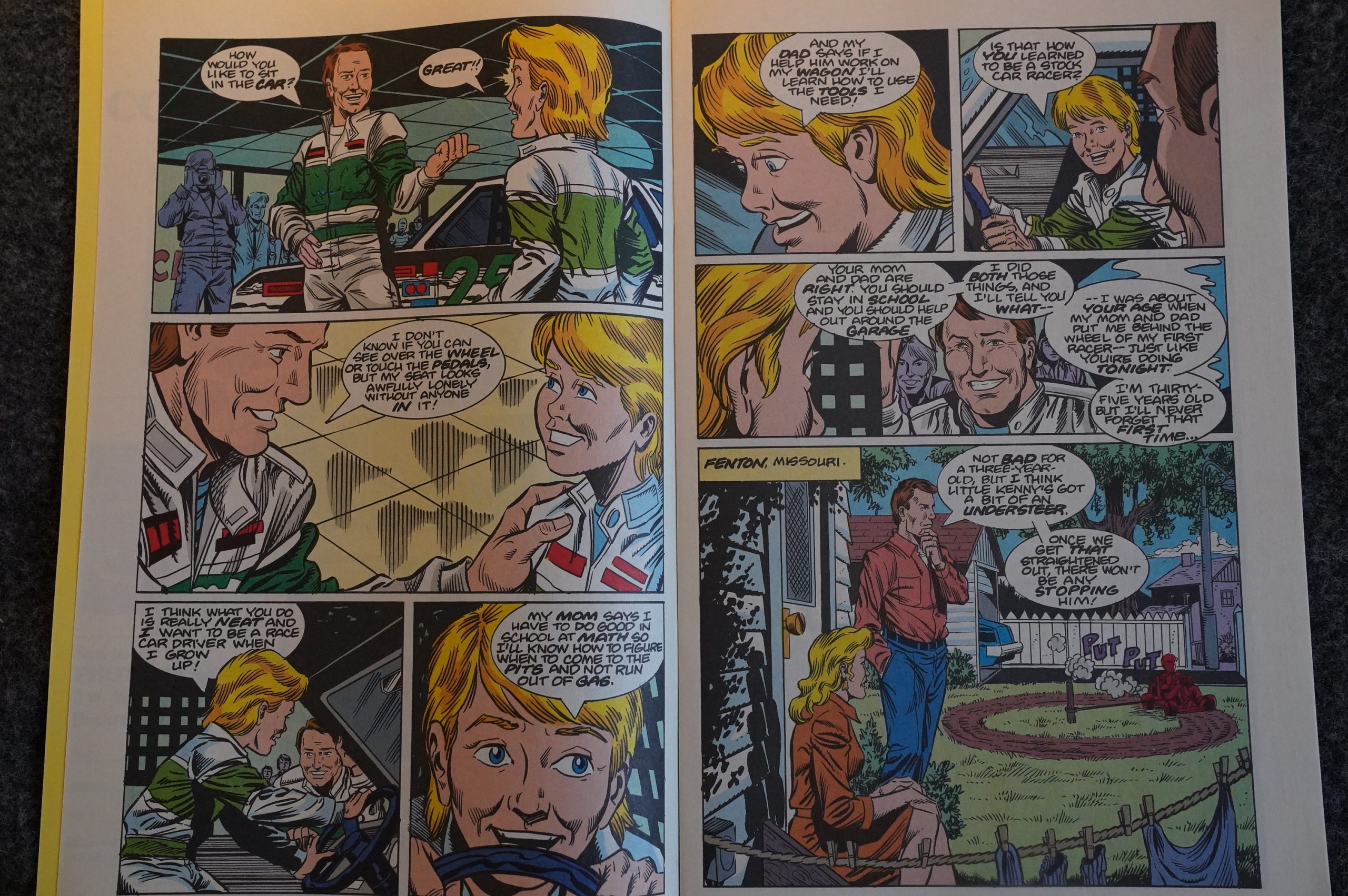 Michael Barsky/Charles Barnett III draws a few of these issues (and Beth Tuschak writes), and… er… what can I say. The storytelling is clear? 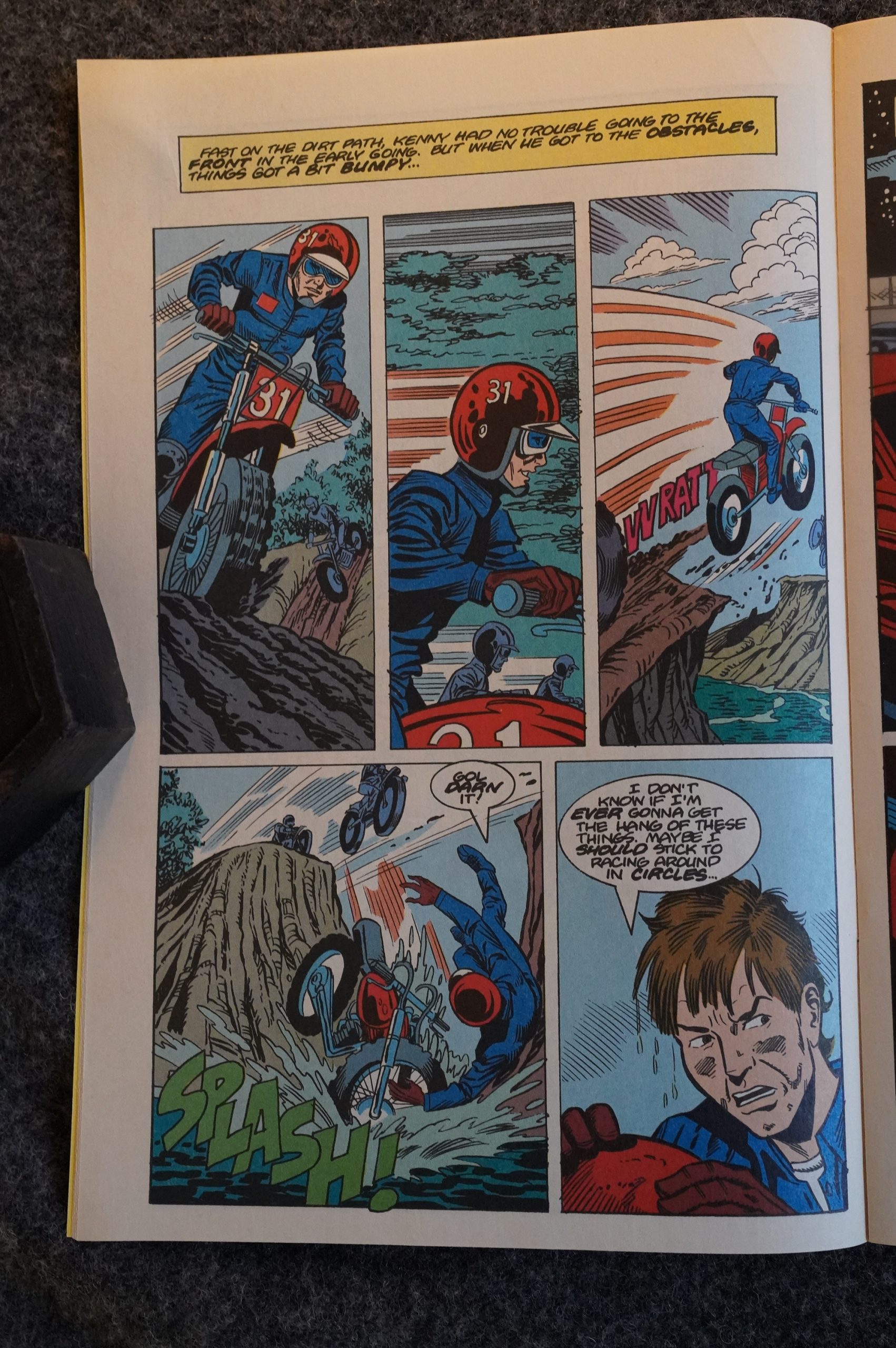 This is the only page of drama and excitement in this issue. 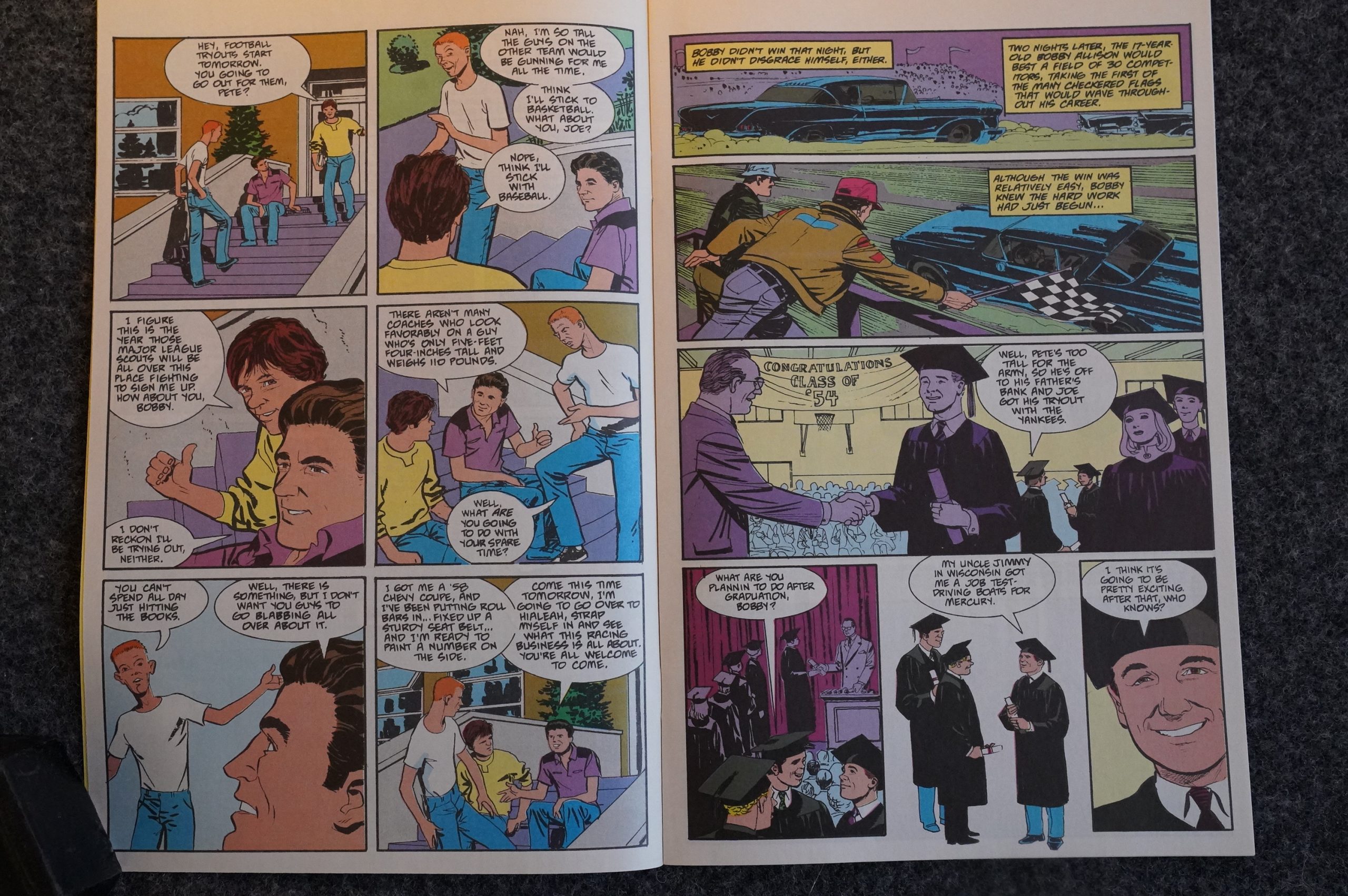 Dan Spiegle does the pencils on the fourth issue (with a gaggle of different inkers), and I was all excited for a second. 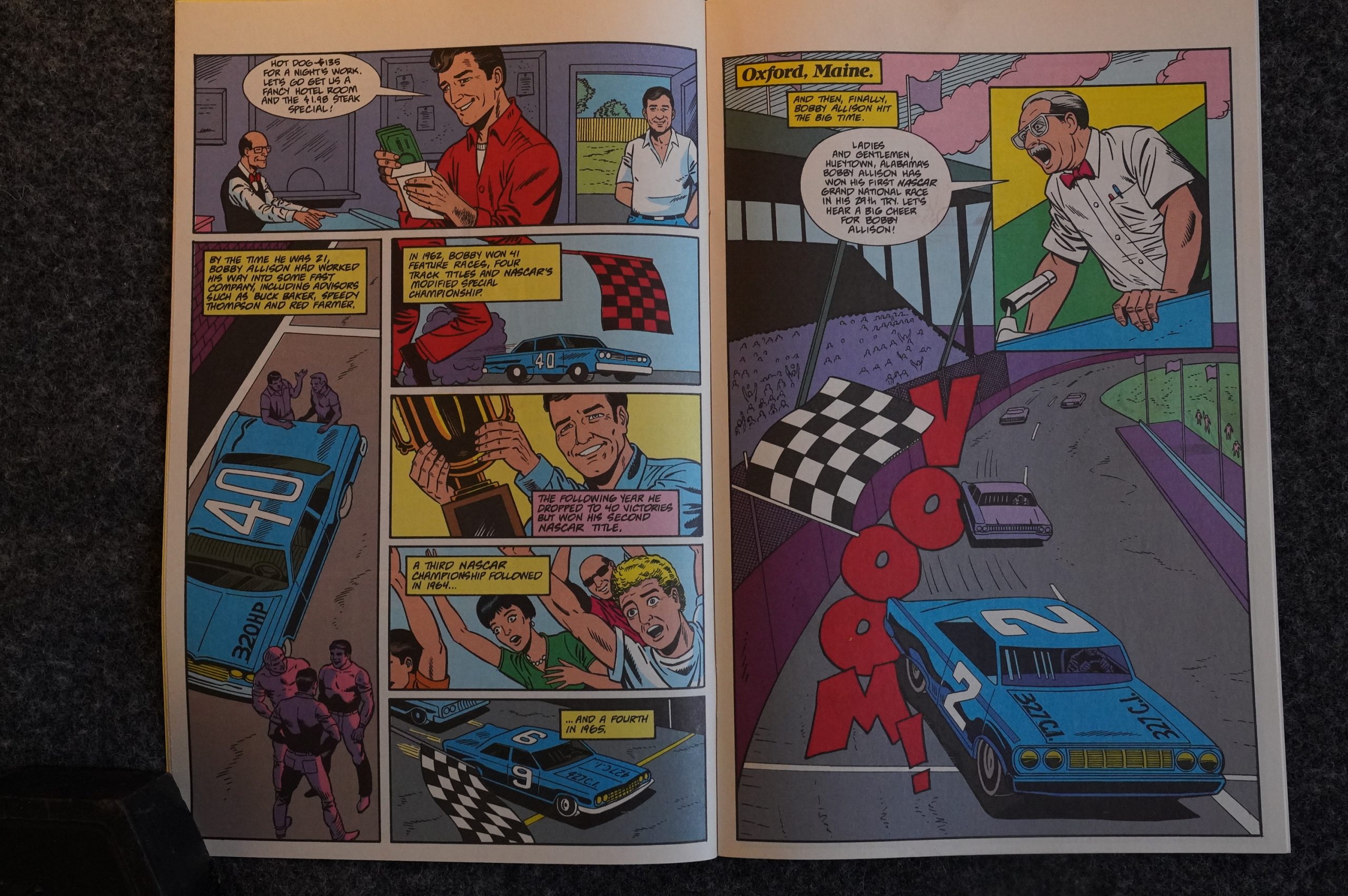 But look at this. Could you possibly make race car driving less exciting?

I mean, I’m not opposed to the concept. I’ve read more than my share of Michel Vaillant comics over the years, and it’s about half racing (and the other half is solving the mystery of who sabotaged their cars this time), and it’s fun. You can do car races in comics and have it work. Here it often seems like the artists have never seen a car before in their lives. And I expected more of Dan Spiegle. 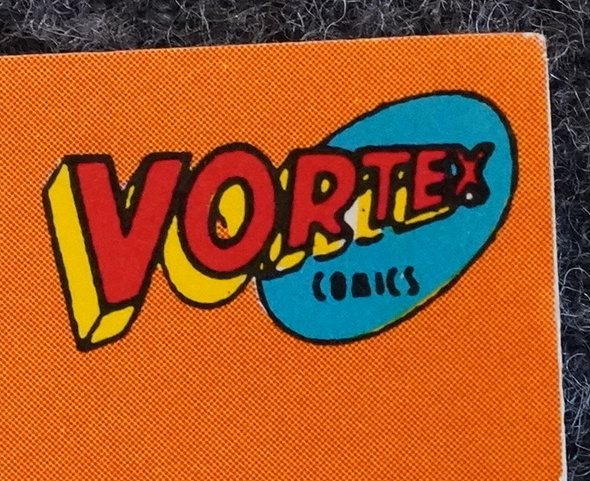 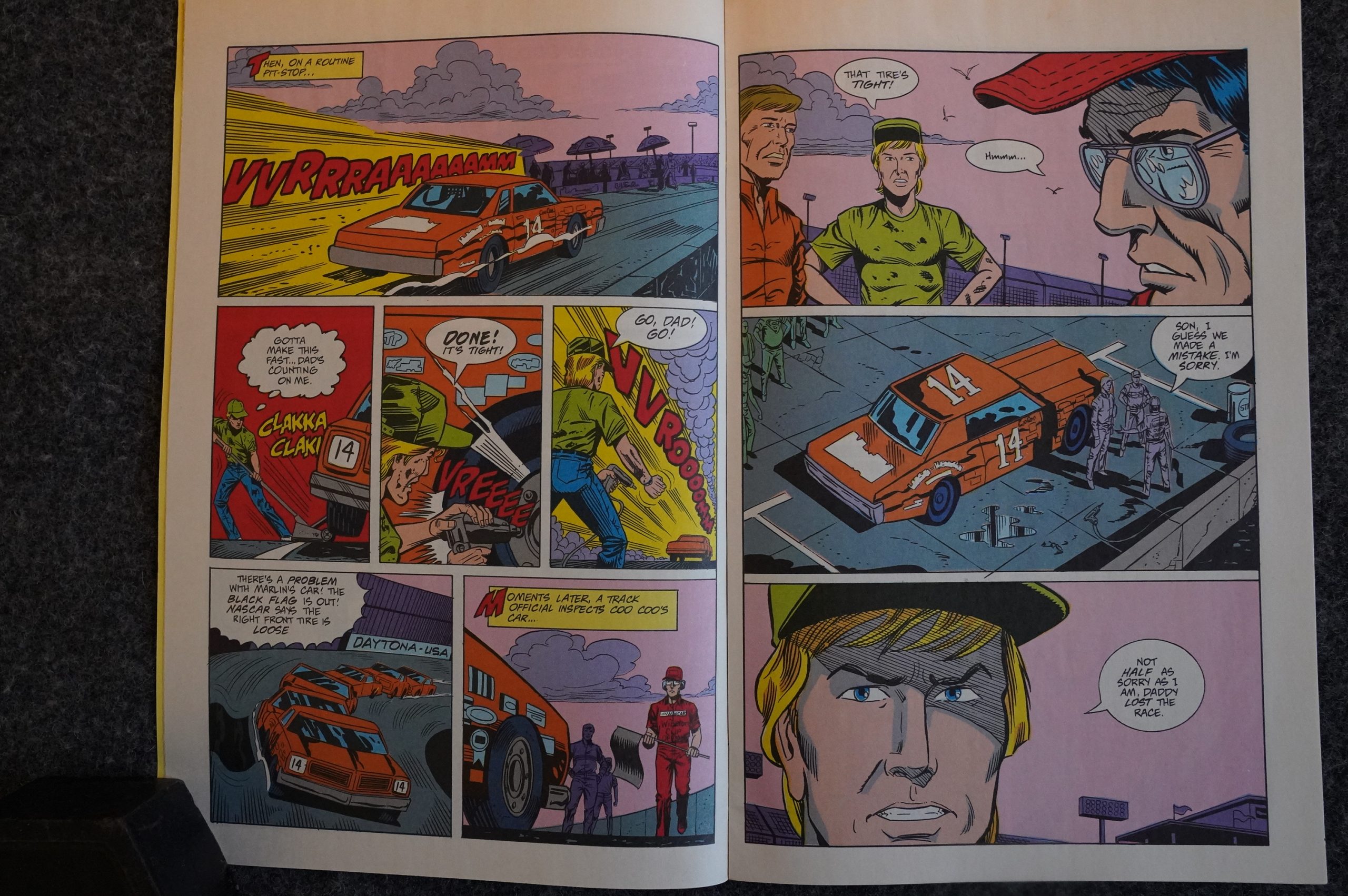 Things pick up in the fifth issue, written by Jerry Potter. It’s like an actual story (it’s Sterlin Marlin’s life story), and it’s … I mean, it’s not good, but in comparison to the issues before this, it’s a masterpiece. 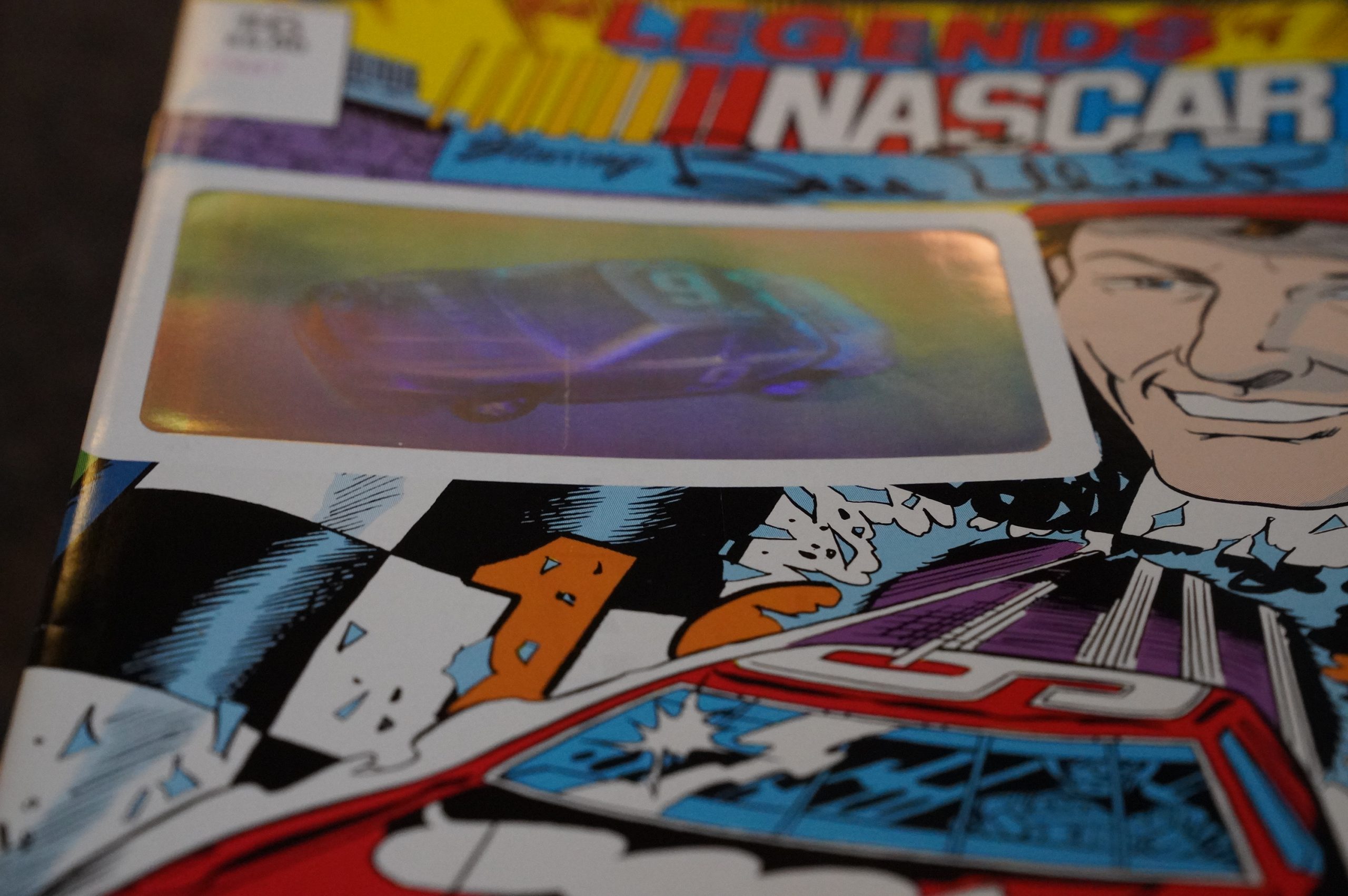 Oooh! That’s one of those holograms? Looks pretty neat. When you change the angle it kinda morphs and elongates. Mike Kenny takes over the colouring, and I think that does wonders. These pages kinda pop, and now racing is almost exciting. (Pencils by Jean Paul Mackenzie and inks by the III guy.) It has a rough-hewn charm. I like it. 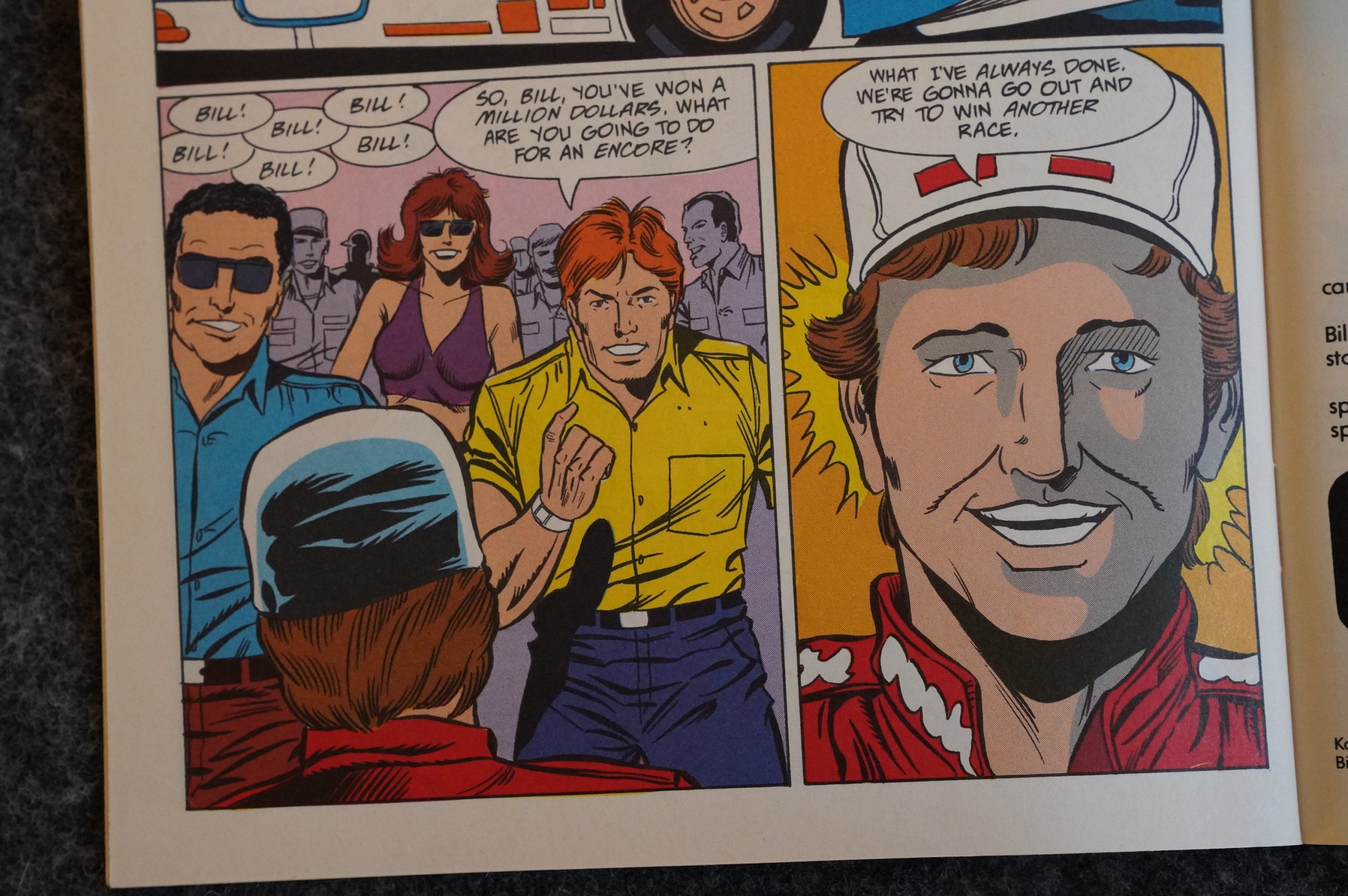 The story is kinda still not actually there, but it’s very true to its sources, I’m guessing — lame sportsy quotes and all. 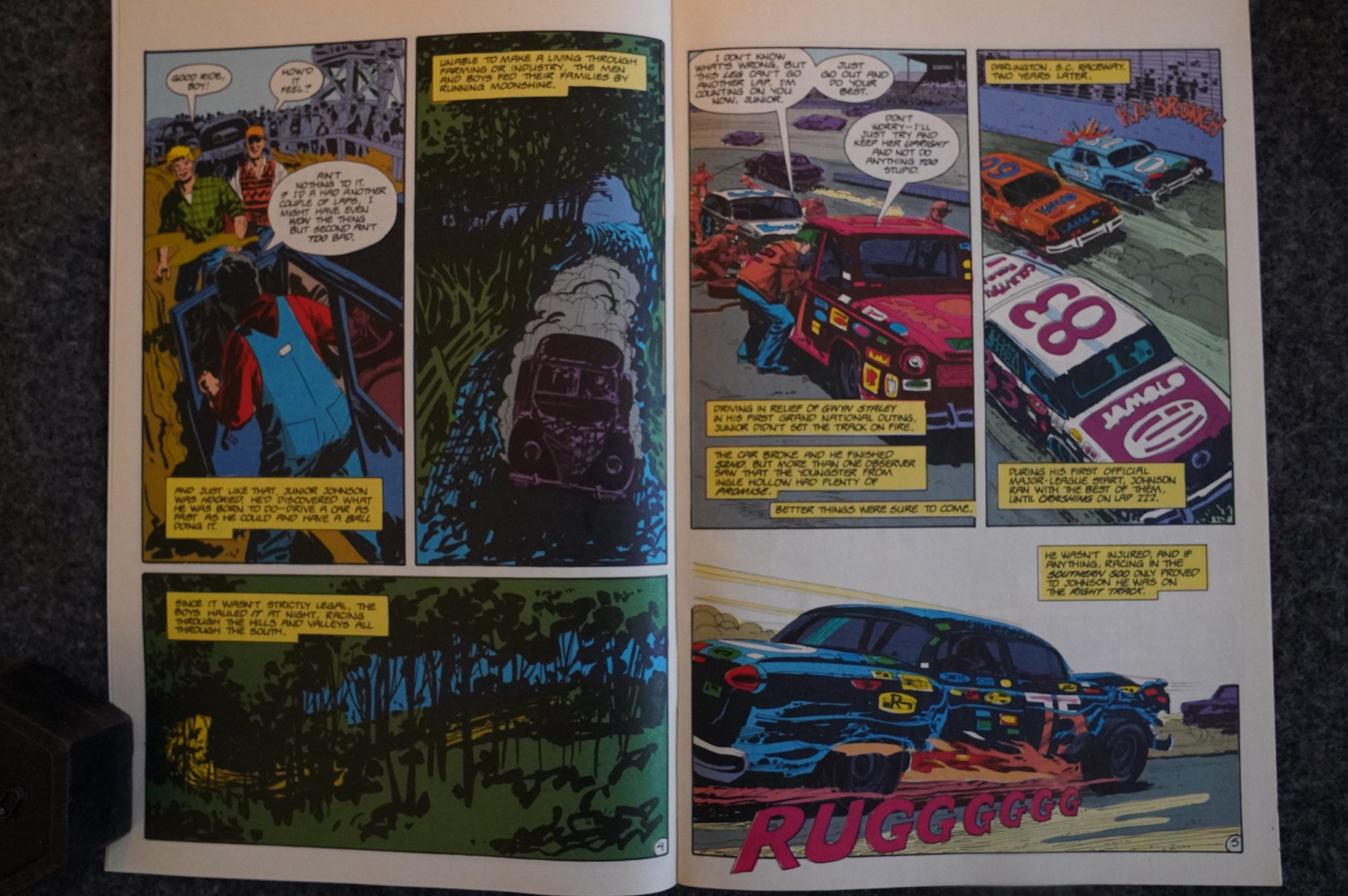 And then! Dan Spiegle is back! And this time he doesn’t half-ass it! Now the cars look like cars and there’s all kinds of fun touches. It’s, unfortunately, perhaps the most boring issue of them all, story-wise, but it looks really good. 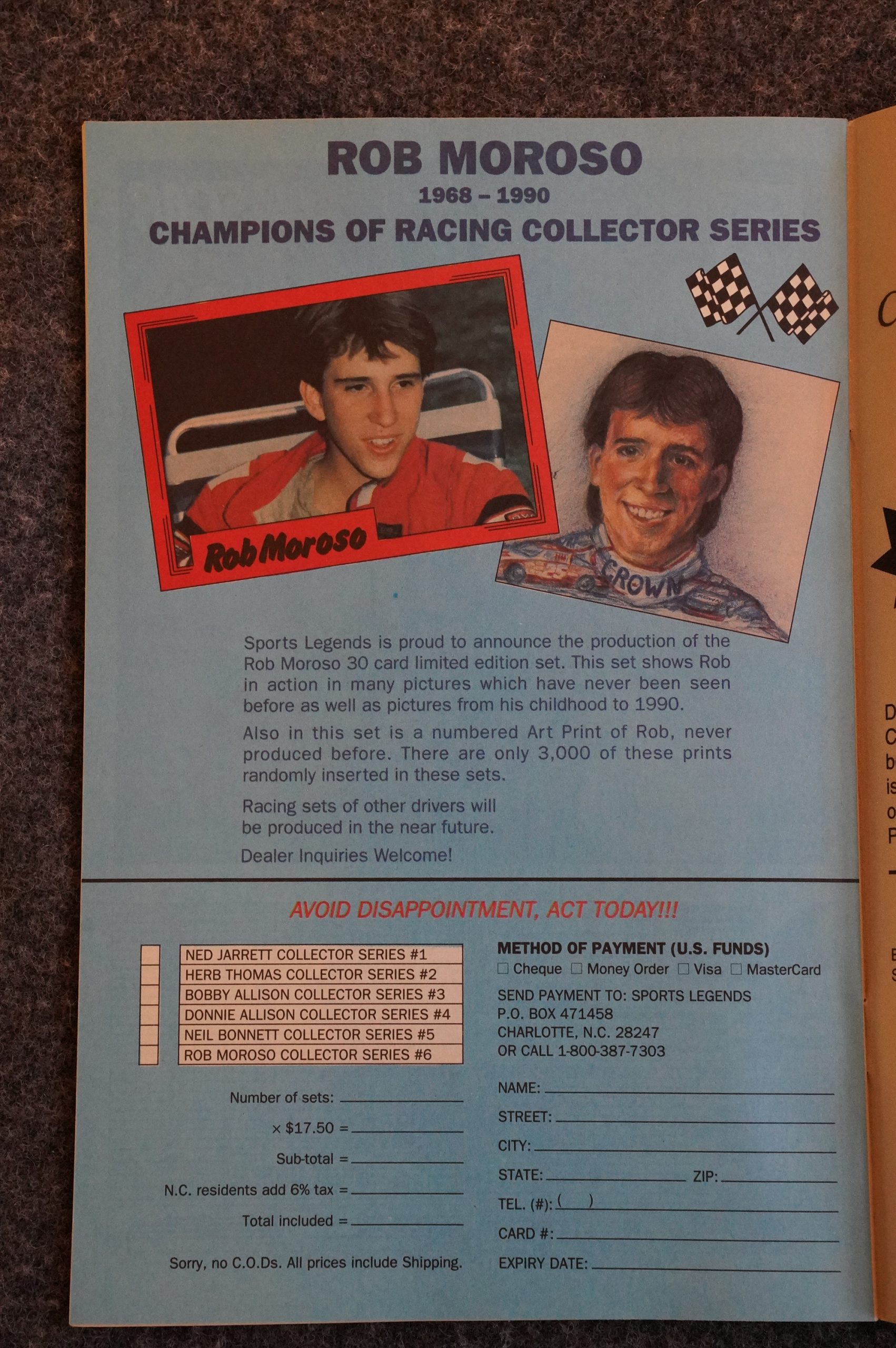 You can get an art print of Rob Moroso along with the Rob Moroso trading cards. Don Heck does the artwork on one of the issues, and while he’s not very good at drawing cars, he manages to inject a lot of action and drama into the people on the page. What?! I don’t have that illustrated screenplay. Oh well, I never promised that this would be a complete (re-)reading of everything Vortex published? Did I? Because it’s not; I don’t have issues 11-13 of this series, for instance. I mnea, there are limits. *sigh* What can I say? Artwork by Paul Abrams and the III guy, and… it’s… it’s horrible, OK? It’s the worst cars ever drawn. The final issue I have is the tenth, and again it’s got spiffy artwork by Dan Spiegle, and is written by Nat and JJ Gertler. And instead of telling the story about a boy that wanted to drive cars and then *surprise* he got to drive cars, it’s about the Talladega race track. It’s basically just of anecdotes about stuff that’s happened at Talladega, but it’s structured around two mechanics bitching at each other and recounting these stories, and it works. I could totally see being into this comic if I were a Talladega fan. Wow. The first issue (about Bill Elliott) had at least three printings, and the second issue about him is sold out. I guess he was popular? And these comics actually sold?

Well, good on them. There’s nothing offensive about these comics, really — most of them are bad comics, but it looks like the NASCAR fans must have liked them, so…

Nope. There’s a bunch of people selling them on ebay, but nobody seems to have written about them?