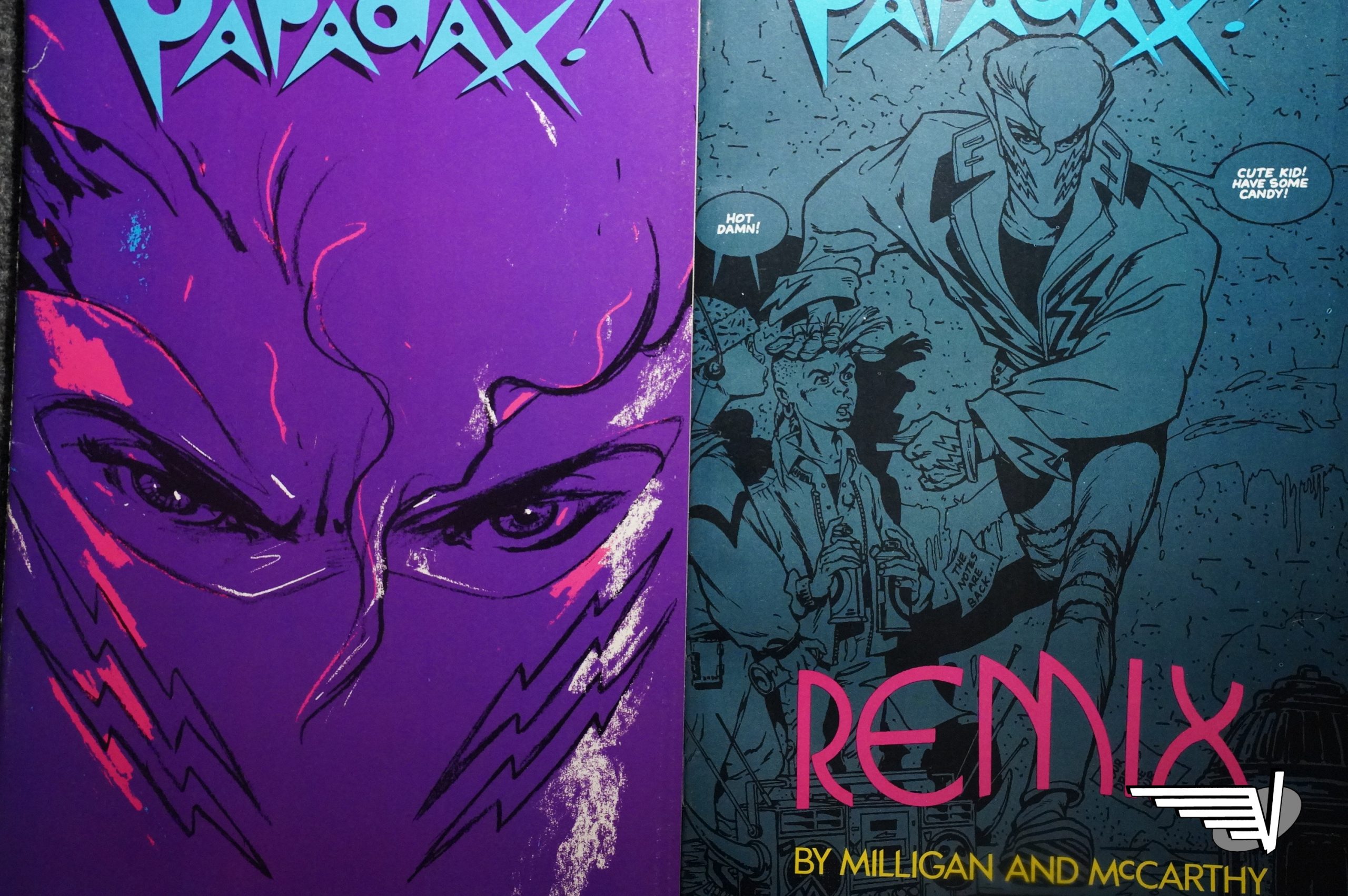 These are the people that did Johnny Nemo and Strange Days at Eclipse, right? And one of the characters in the latter series was Paradax… 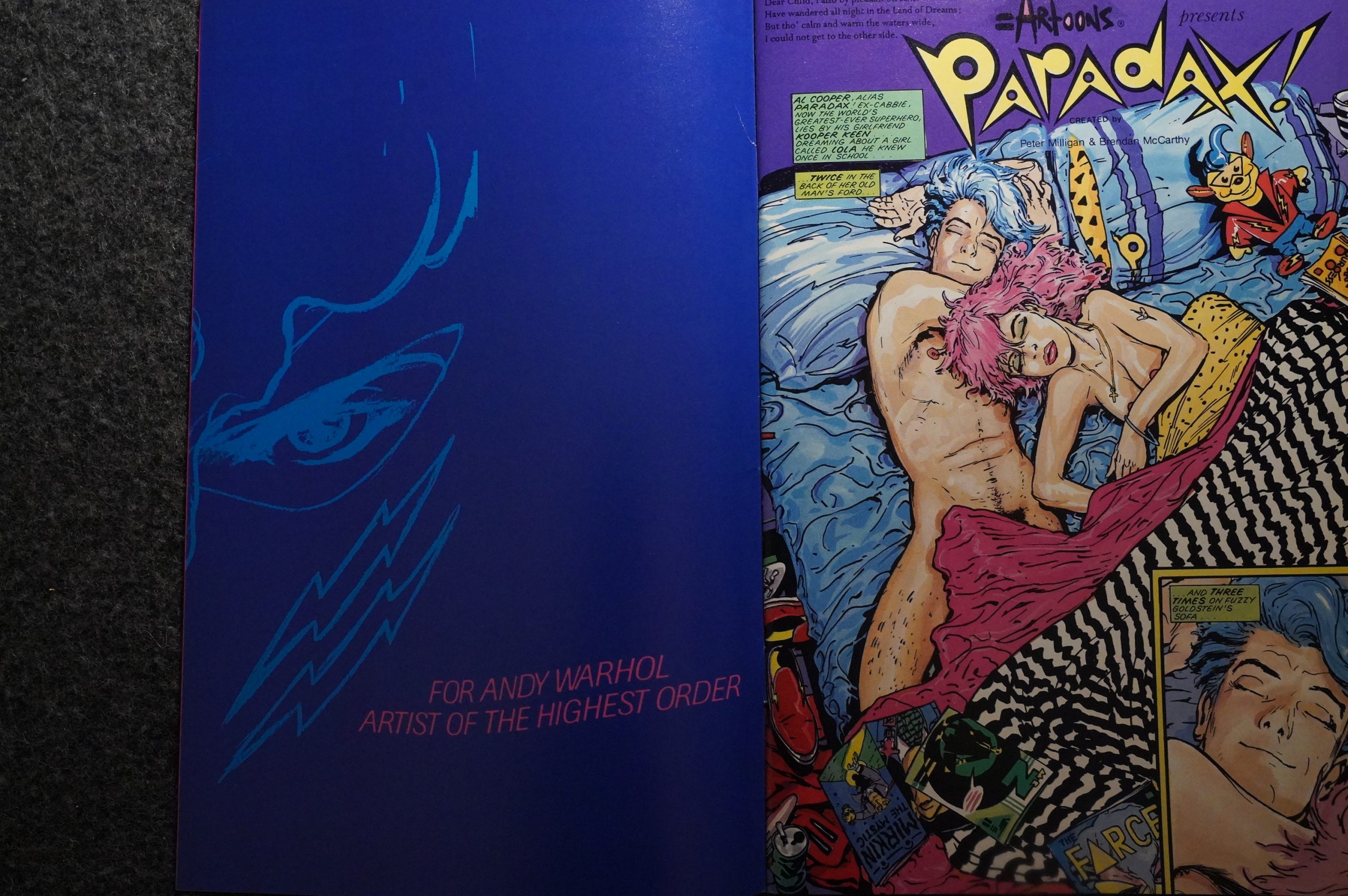 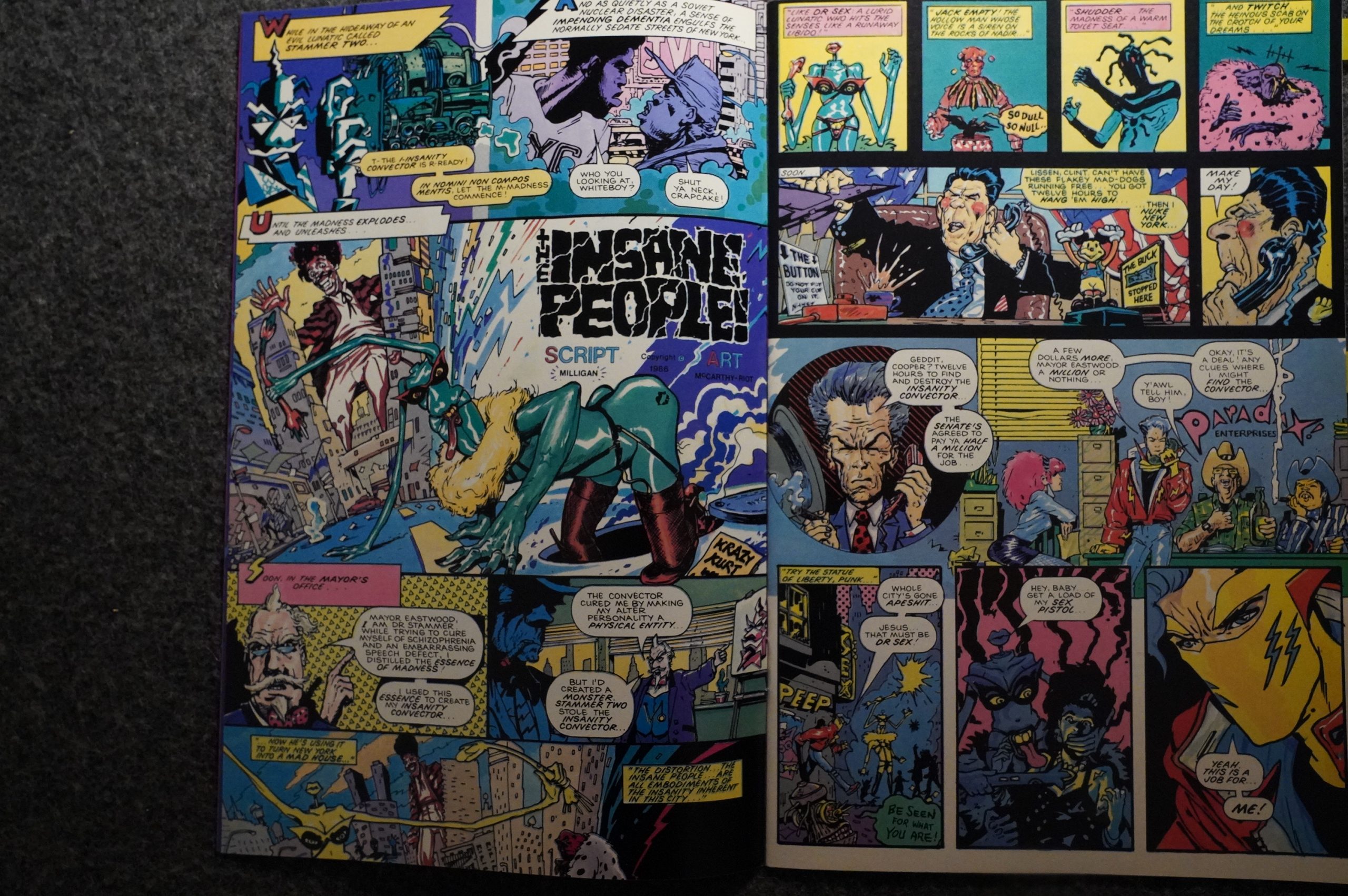 Wow! That’s a lot. An explosion of colour and silliness, and also (of course) so much politics. (It turns out that Ronald Reagan was a bit stupid? Who knew!) 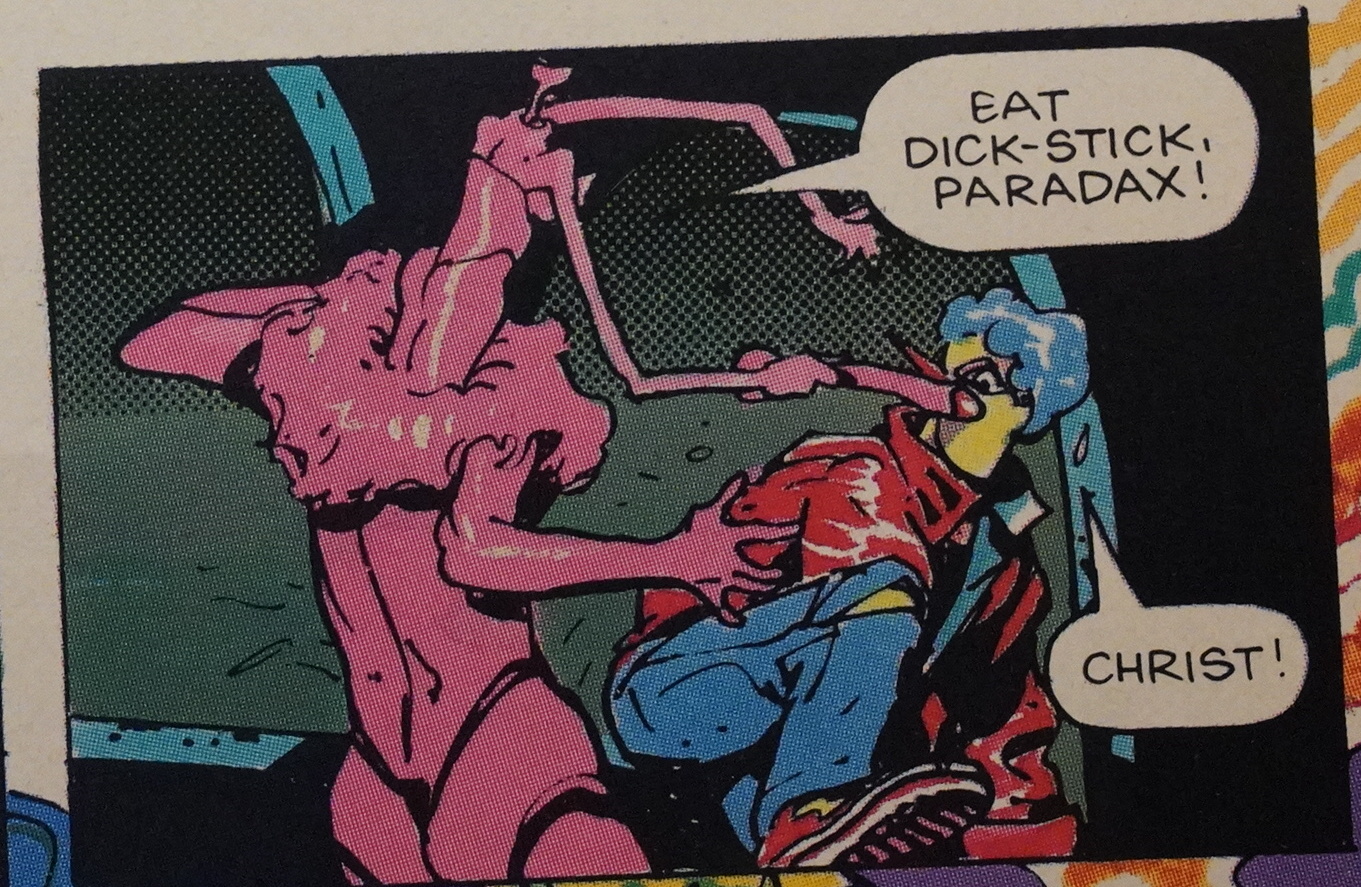 This is a lot of fun: It’s about a super-hero called (yes) Paradax who’s saving New York… after getting paid. It’s told in a way that you’d think it’d fall apart at any time, but it’s instead a fast-moving fun little story.

Yes, little: The first issue is three eight-page stories, and now I’m wondering whether they’ve been reprinted from somewhere (some British magazine)? 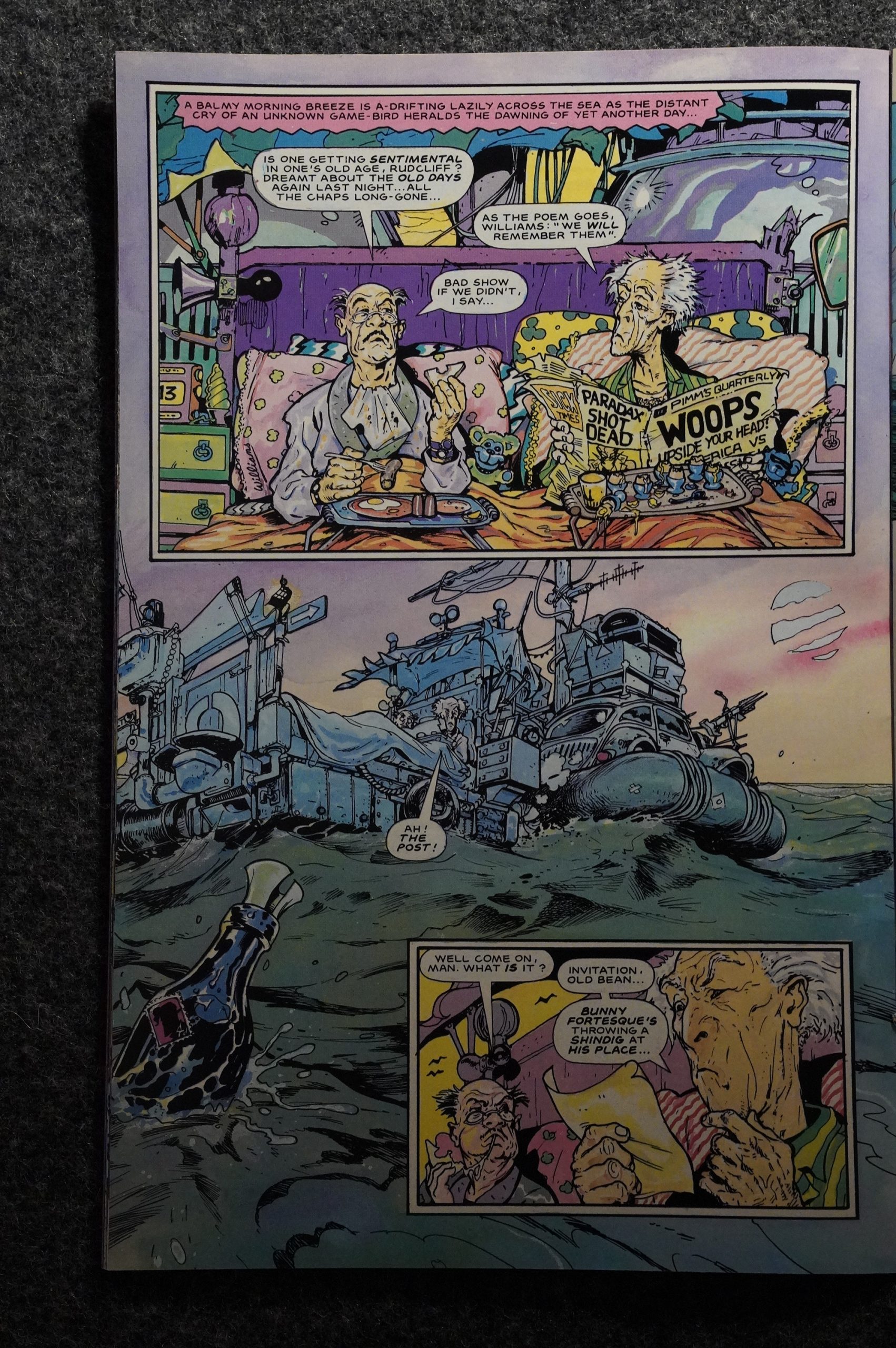 The second story doesn’t have Paradax at all, but instead have these dapper gentlemen… and, wow, when we got to the second panel there, I was like “yes!” Being out to sea in your bed: That feels like something I have to have dreamt at some point, right? 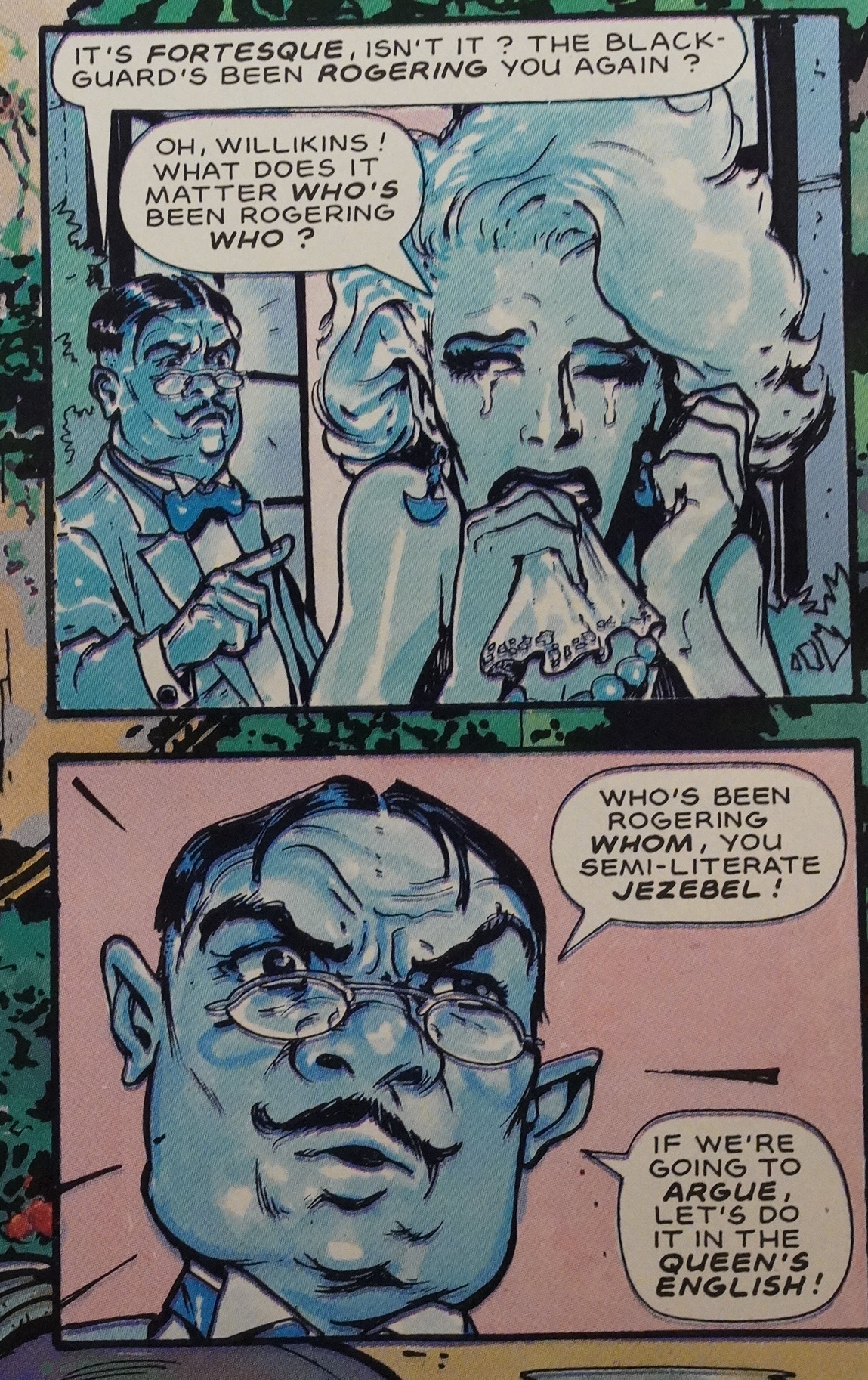 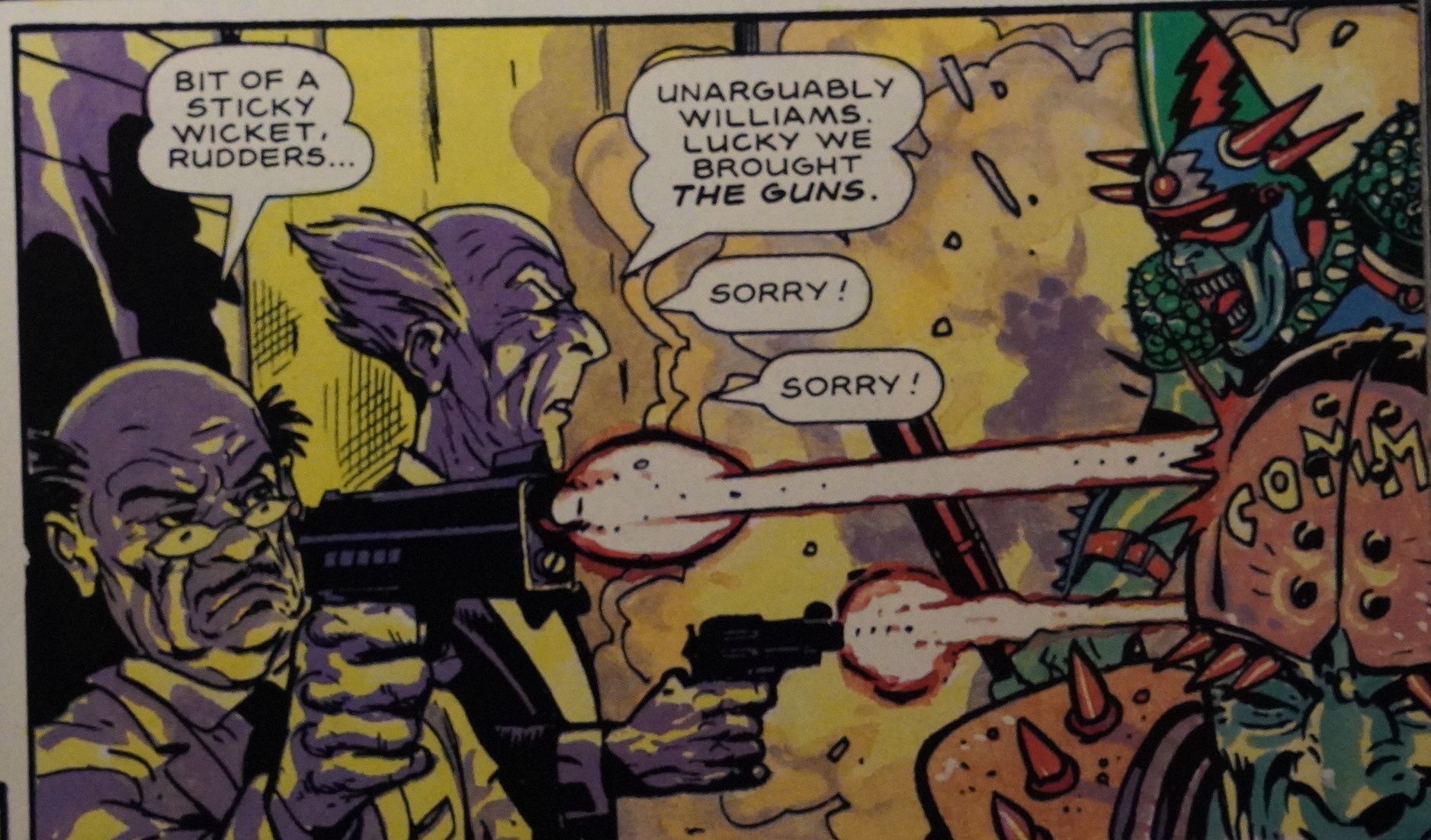 I love it! Gotta be polite while shooting people. 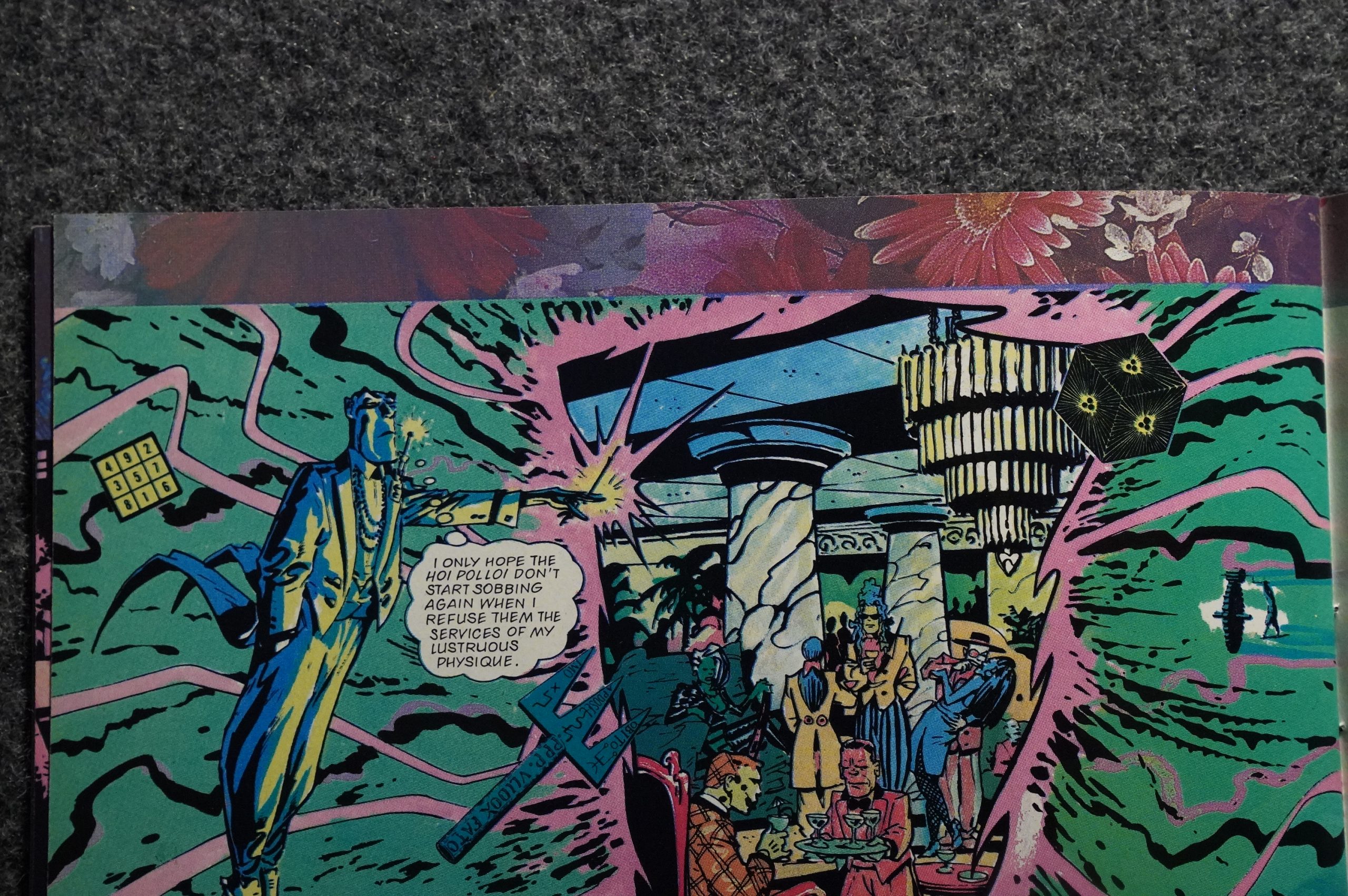 The third story has smaller lettering and these extra borders at the top and bottom, so I’m guessing this one was reprinted from a magazine-sized er magazine?

So that was a pretty good first issue: The first two stories were solid, and lots of fun, and the third was… weird… 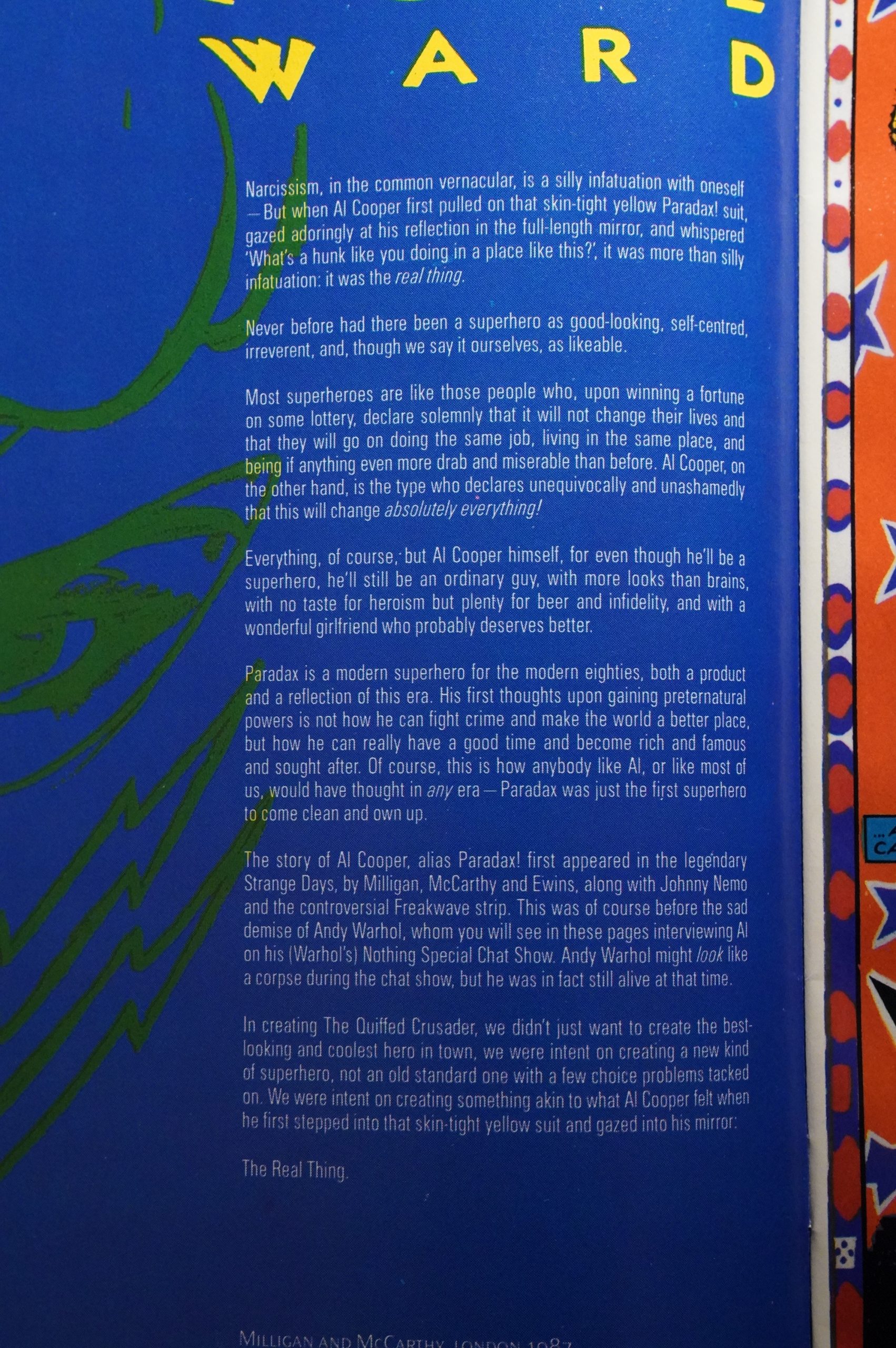 Then the second issue turns out to be a reprint of three Paradax stories from Strange Days, which is a disappointment. 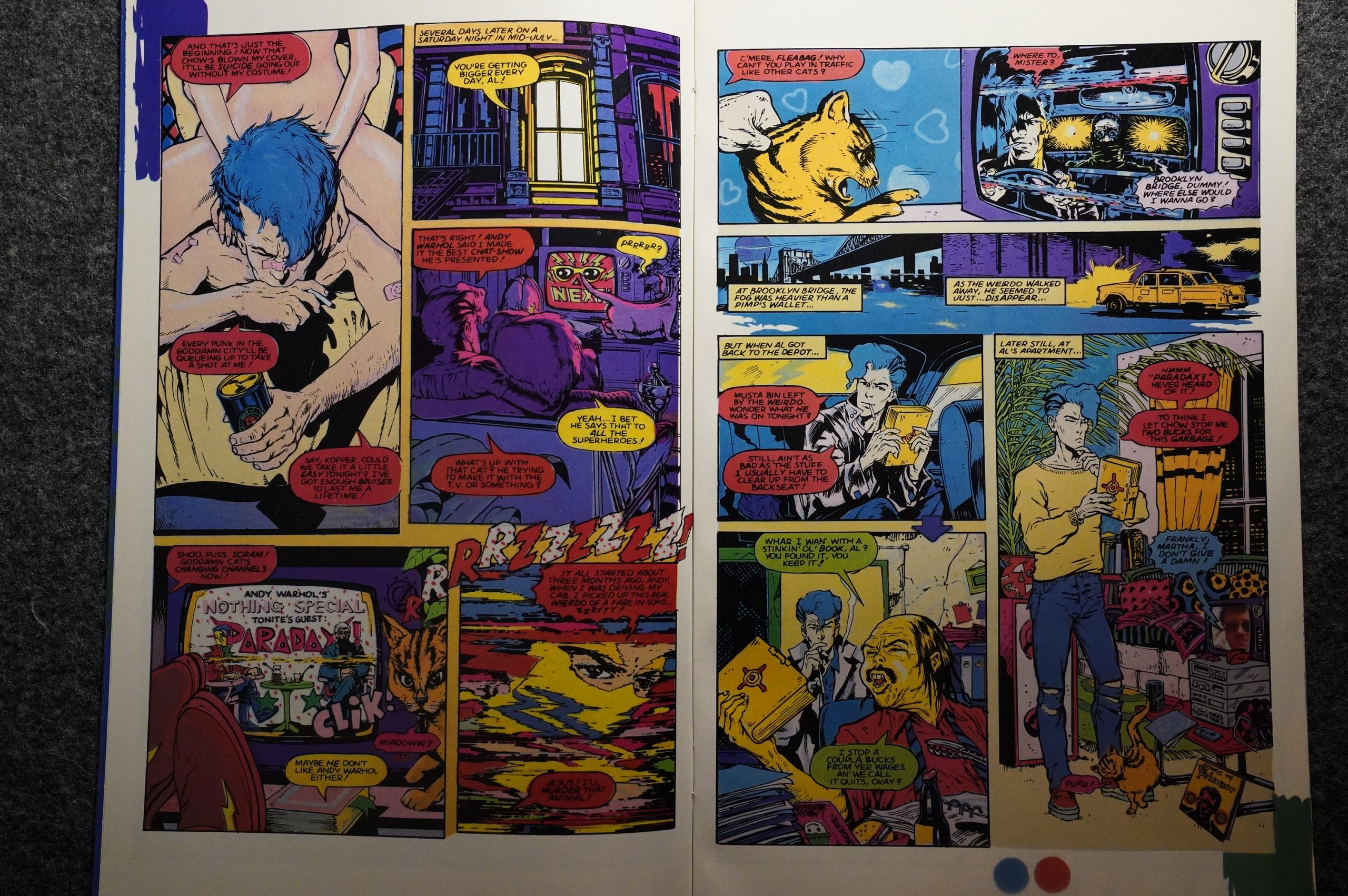 Because I re-read these the other year.

They’re more traditional than the stuff in #1, but still pretty wild.

Maximalism doesn’t begin to describe it.

Although Paradax! is both the
•main character and main selling
point of the comic, both Milligan
and McCarthy hope that the suppor-
ting strips will. prove equally or
more popular, as McCarthy told me
“We love Paradax:, of course. but
there’s so much more we want to do.
We’d like to produce a Milligan and
McCarthy comic featuring widely
and wildly different characters and
stories. The point is, Milligan and
McCarthy create these things. We’re
bigger than our creations. This is the
first comic that is pure Milligan and
McCarthy, even though Tony Riot
did the pencils on Paradax! The
situation we’d like to get to is where
people want to see us perform,
where they buy a piece of Milligan
and McCarthy, and not necessarily
a particular character.”
And his partner Milligan backed
him up. “It’s a case of seeing what
happens, of seeing how people react
to•the other stories in Paradax! If
everything goes well, I suppose
there’s a good chance we’ll continue
working with Bill Marks. I know
Bill is supposed to have a reputation
in this industry, but so tnany people
do! All you can do is go by how peo-
ple treat you, and so far Bill has
been great. Very keen and positive,
there have been no problems, he
doesn’t interfere with us editorially,
which is very important, so every-
thing’s fine. We’ve never had any
doubts about Vortex’s ability to put
out as really quality product, of
course. You just need to look at
some of the other things they’ve pro-
duced.”

Vortex is picking up the rights to
the new-wave super-hero title
Paradax, which will be released as
a two-issue, full-color”Scratch Mix
Micro Series.” The issues will in-
clude some “re-mixed re-colored
jazzed-up versions” of some of the
earlier Paradax material, which saw
print in Eclipse•s Strange Days
book.

So it was originally planned as a two-issue series? Hm, perhaps Marks changed his mind?

I invented Paradax! in the early 80s, and asked the question, ‘what would it be like if an ordinary guy down the road became a superhero?’, which over 30 years ago, was a fairly novel approach: He would drink, smoke pot, fuck girls, watch himself being interviewed on TV, be an annoying self-infatuated asshole obsessed with stardom, have a manager, and take the money and run.

These stories were probably included in the collected edition.

These are quirky, psychedelic, multi-layered comics that will both befuddle and entertain upon repeated readings.