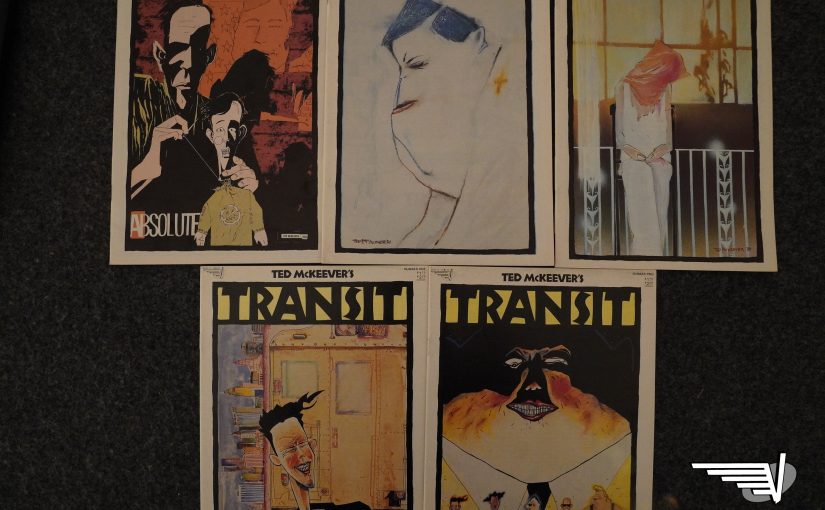 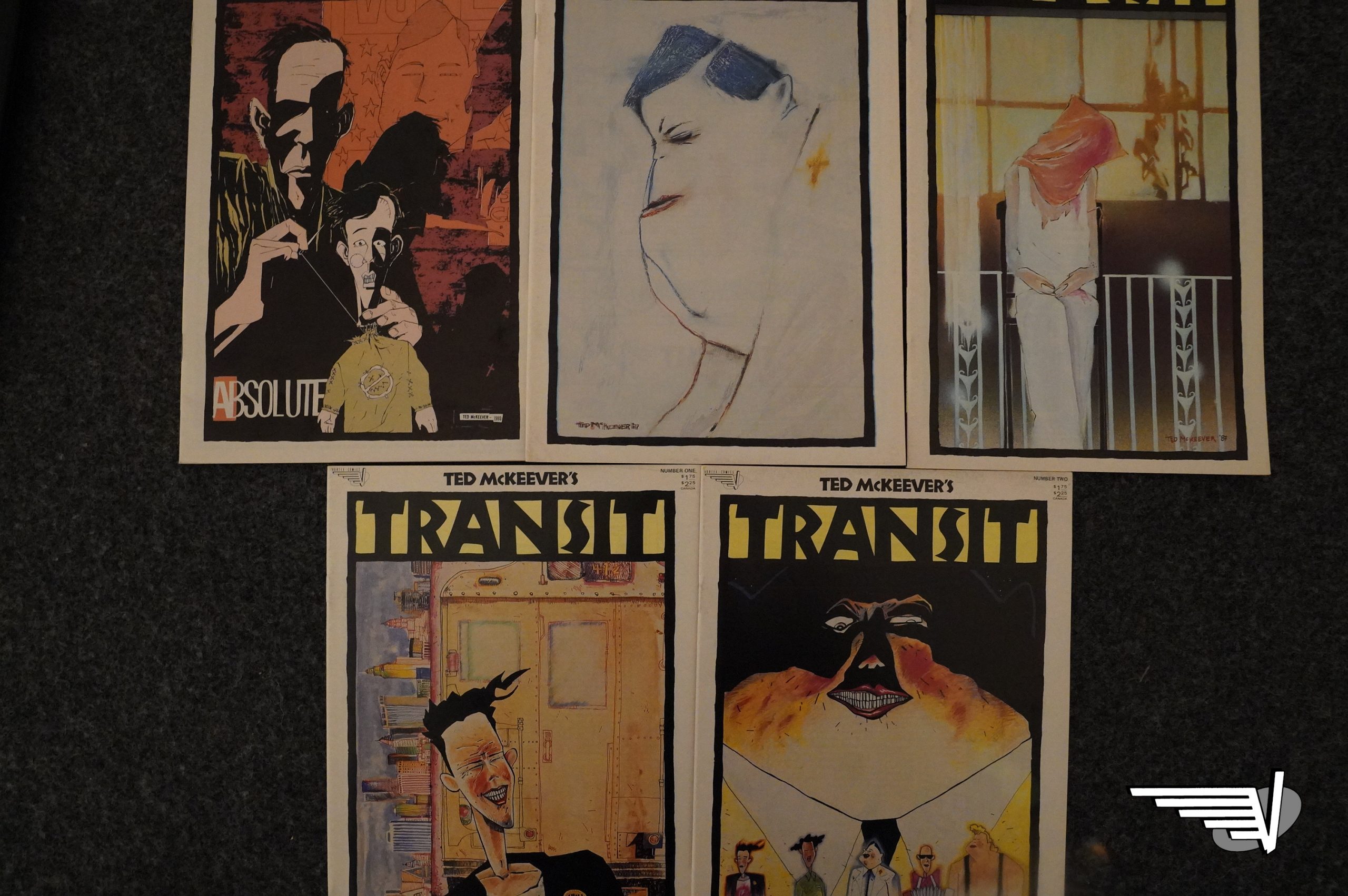 As a teenager, McKeever’s artwork fascinated me. All my doodles turned into McKeever faces, replete with way too many teeth. Lou Stathis, the editor, writes an introduction to the series. I think he’s going for punk smart aleck, but he lands at hard-sell card salesman with delusions of grandeur.

And… Gary Panter is Throbbing Gristle? Frank Miller is Roxy Music? What? That just doesn’t scan. So let’s read the first three pages of this comic instead. 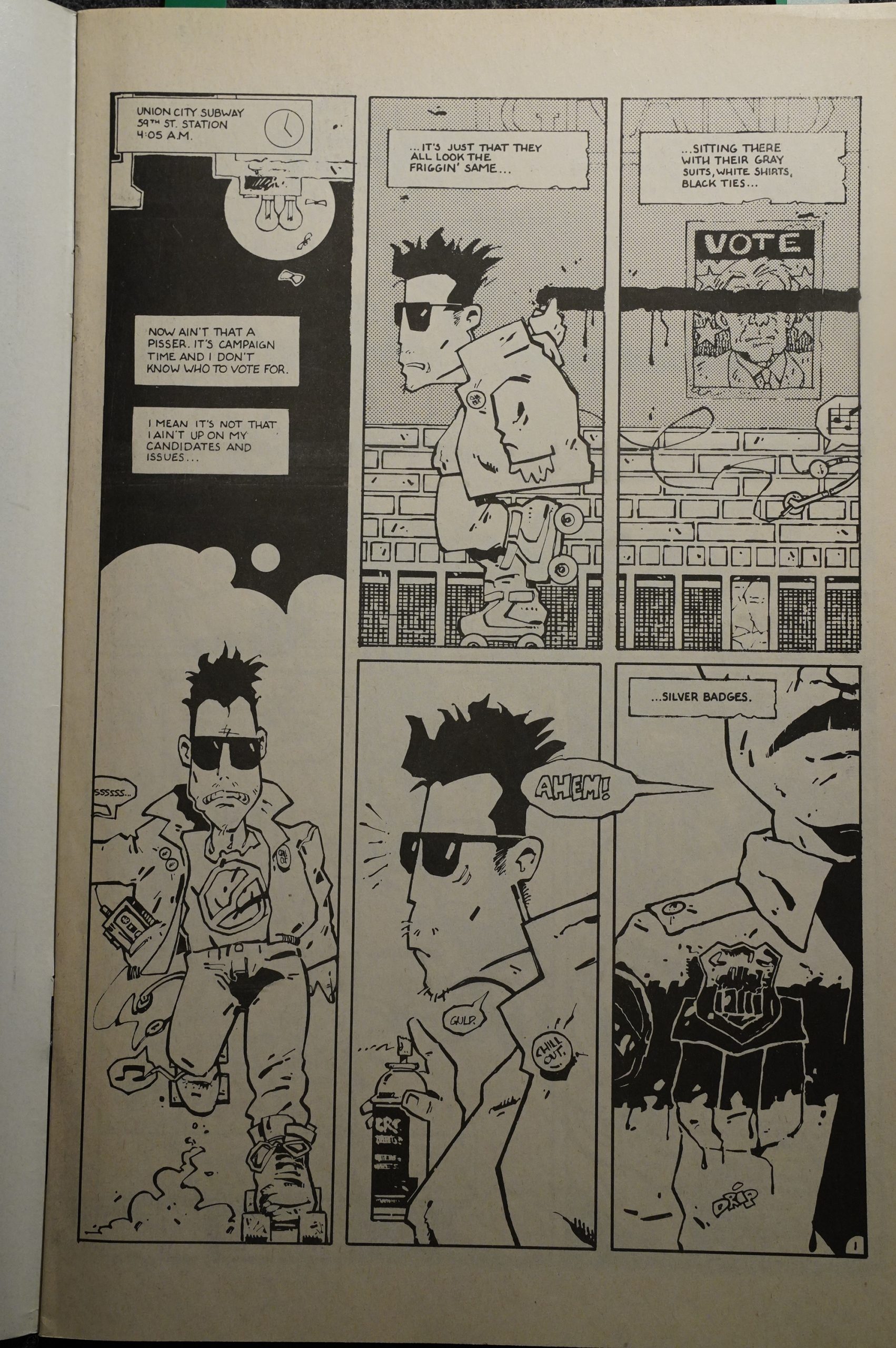 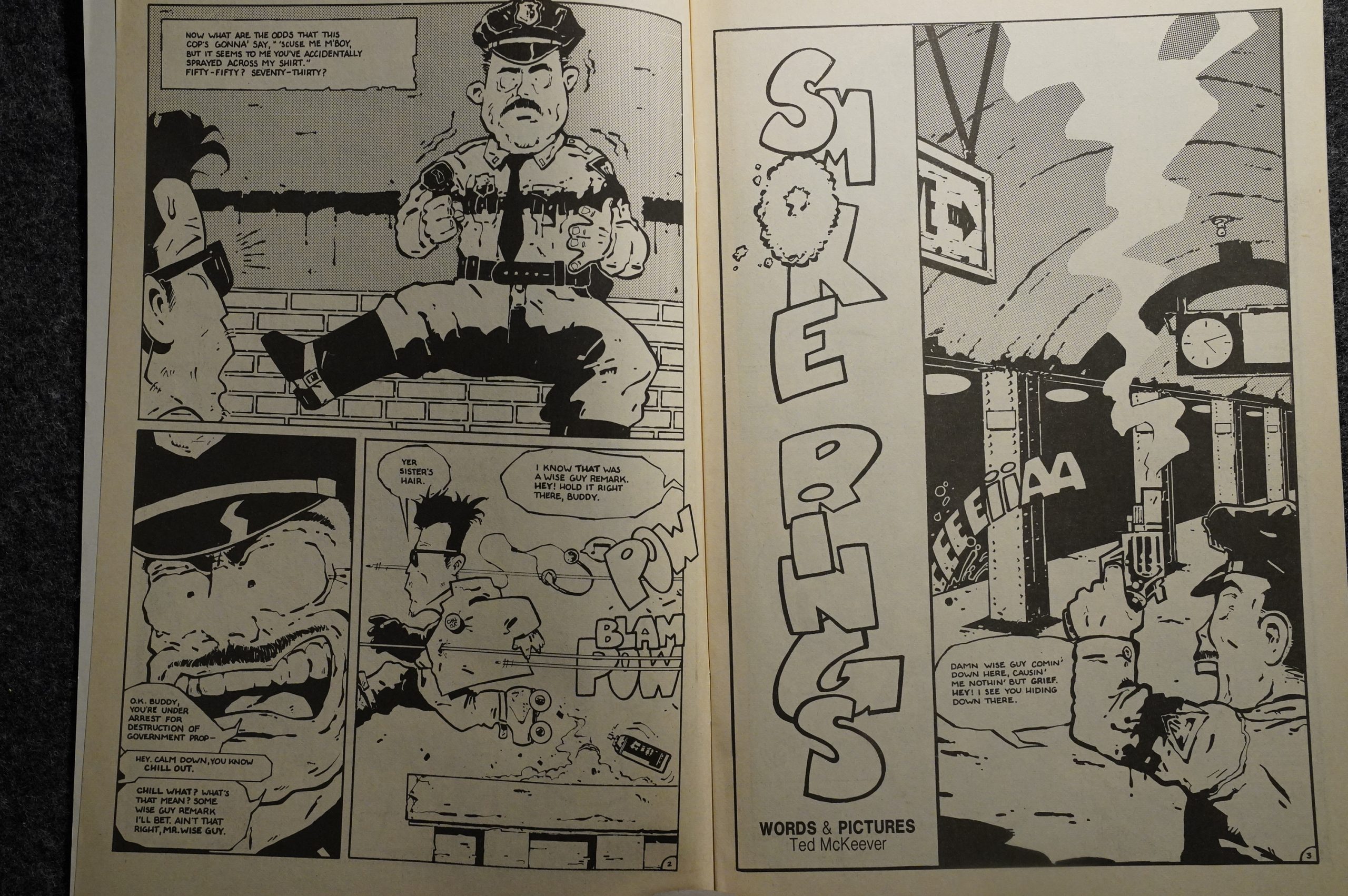 This is not the McKeever I remember! This super-deformed awkwardly cartoony stuff looks more like prime Black & White Boom garbage. Was this series originally meant for Aircel or something?!

I wonder whether these opening pages were done several years before the rest, because… 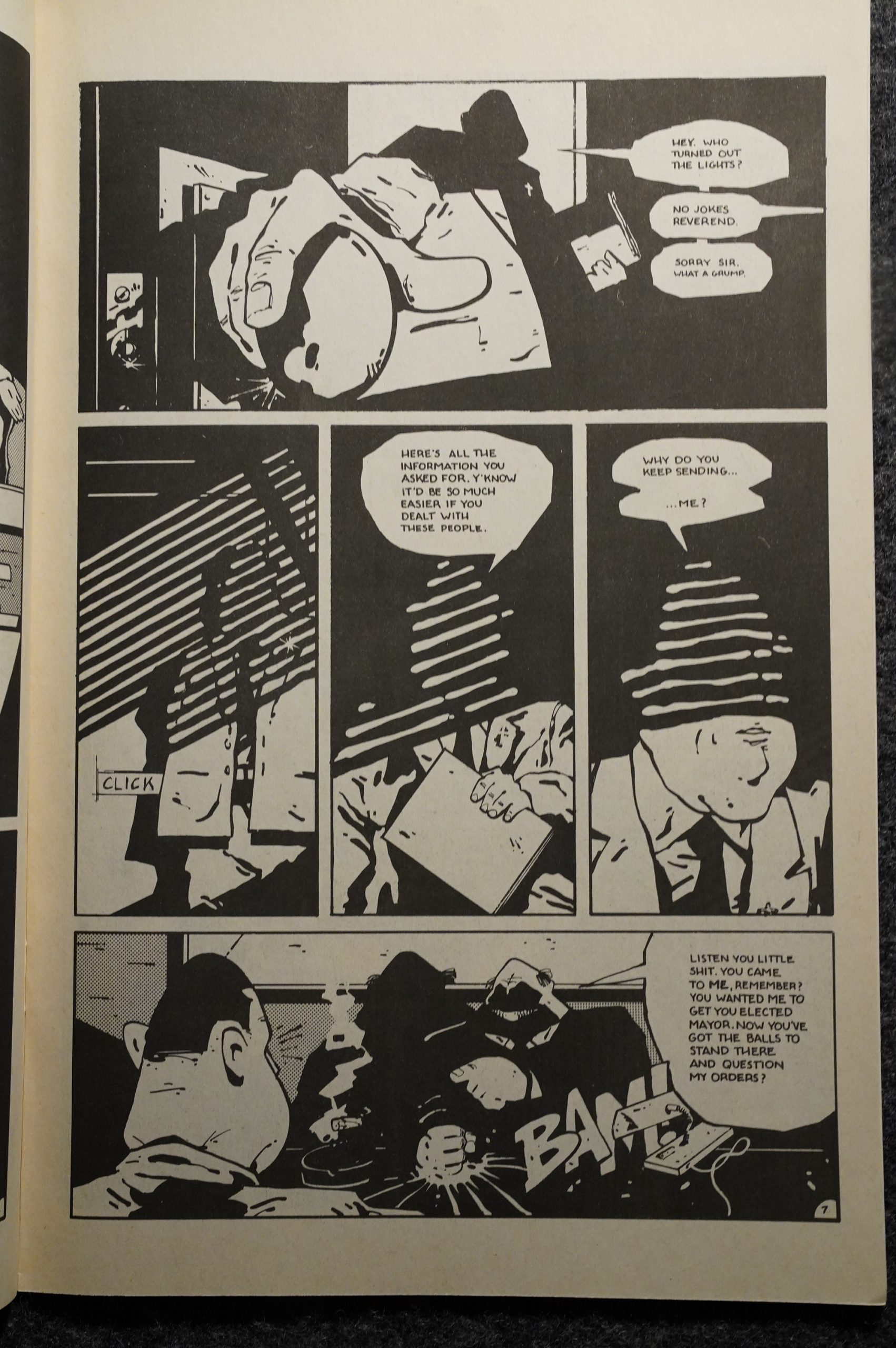 … the artwork evolves in leaps and bounds on every page, and McKeever is no longer doing Marc Hansen, but is now doing Frank Miller by Keith Giffen without access to his Muñoz swipe pages. 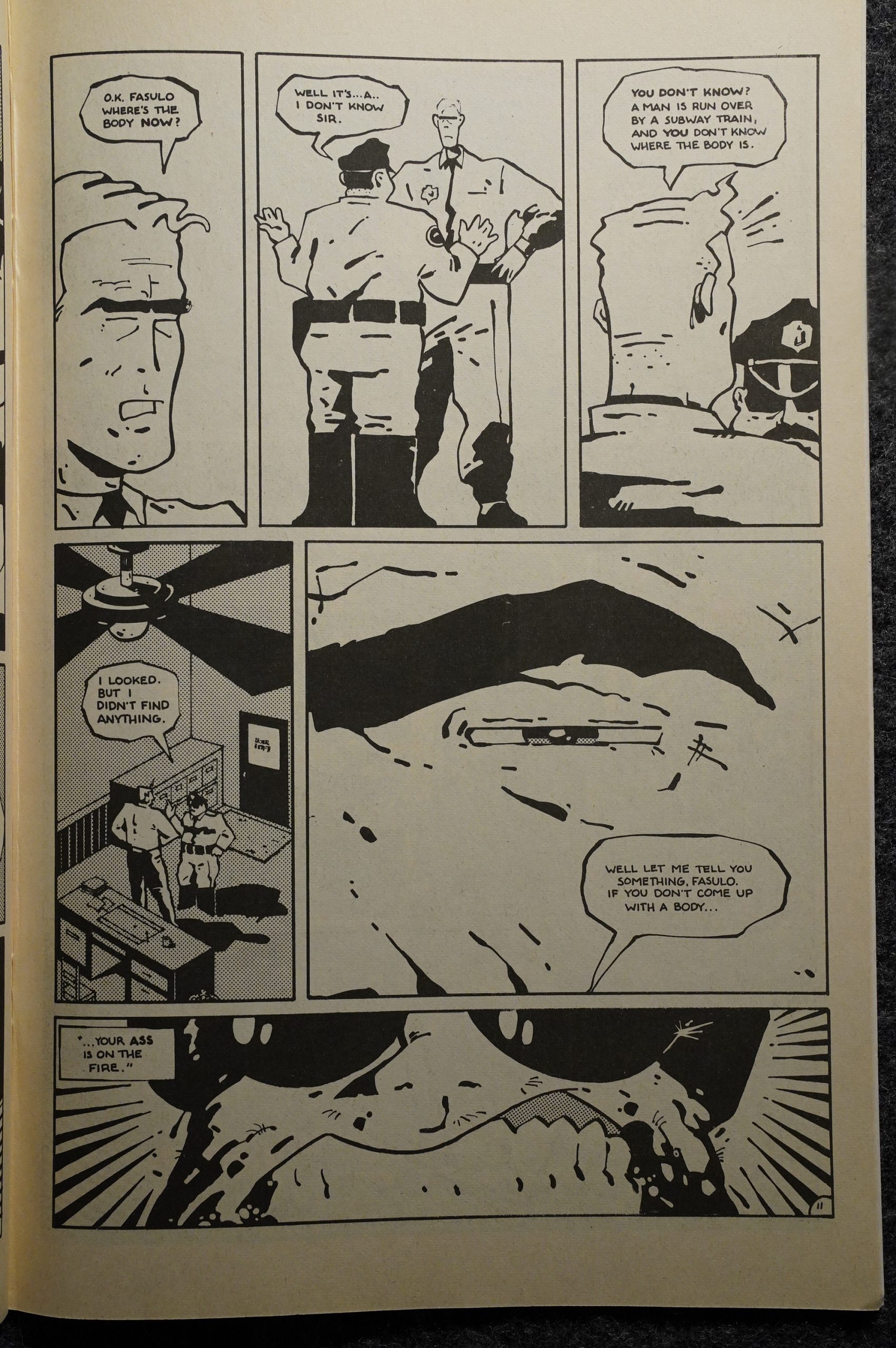 You can tell that this is a fantasy comic, because that cop (possibly) killed someone, and then he gets chided by his boss. That just never happens. 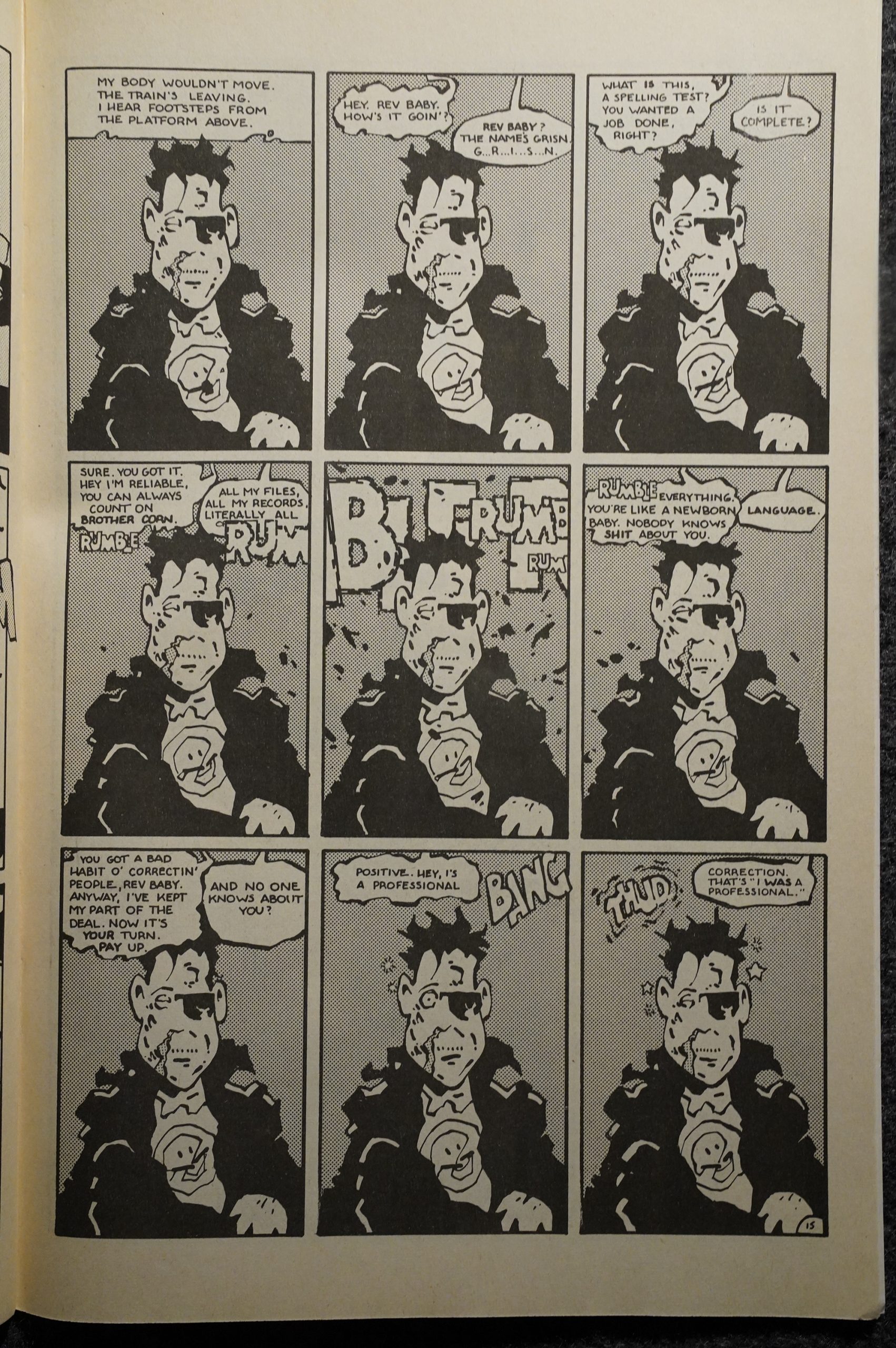 And then… he’s doing Dave Sim?

Stathis helpfully tells us that Transit is going to be all valuable one day! Let’s see… 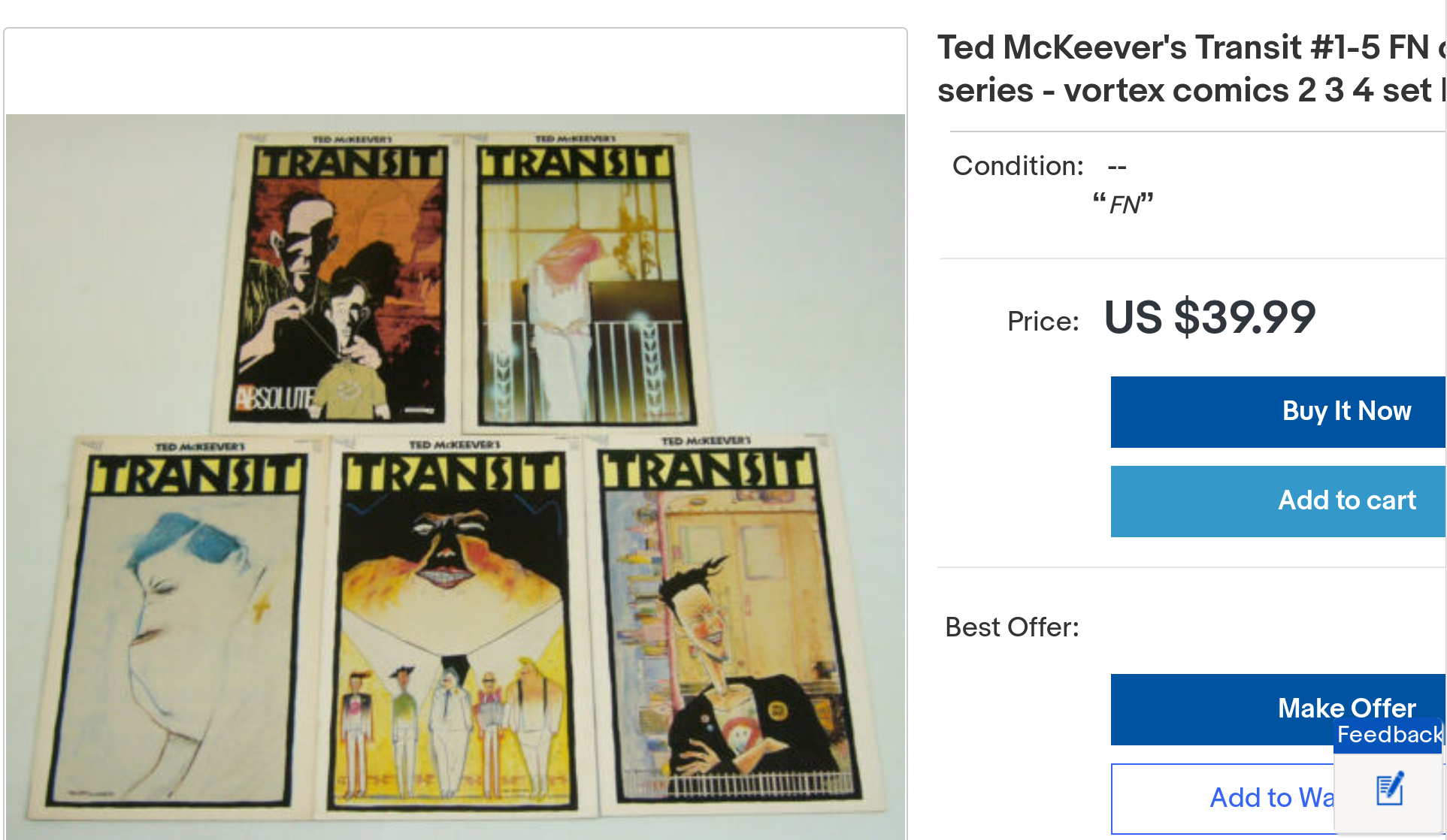 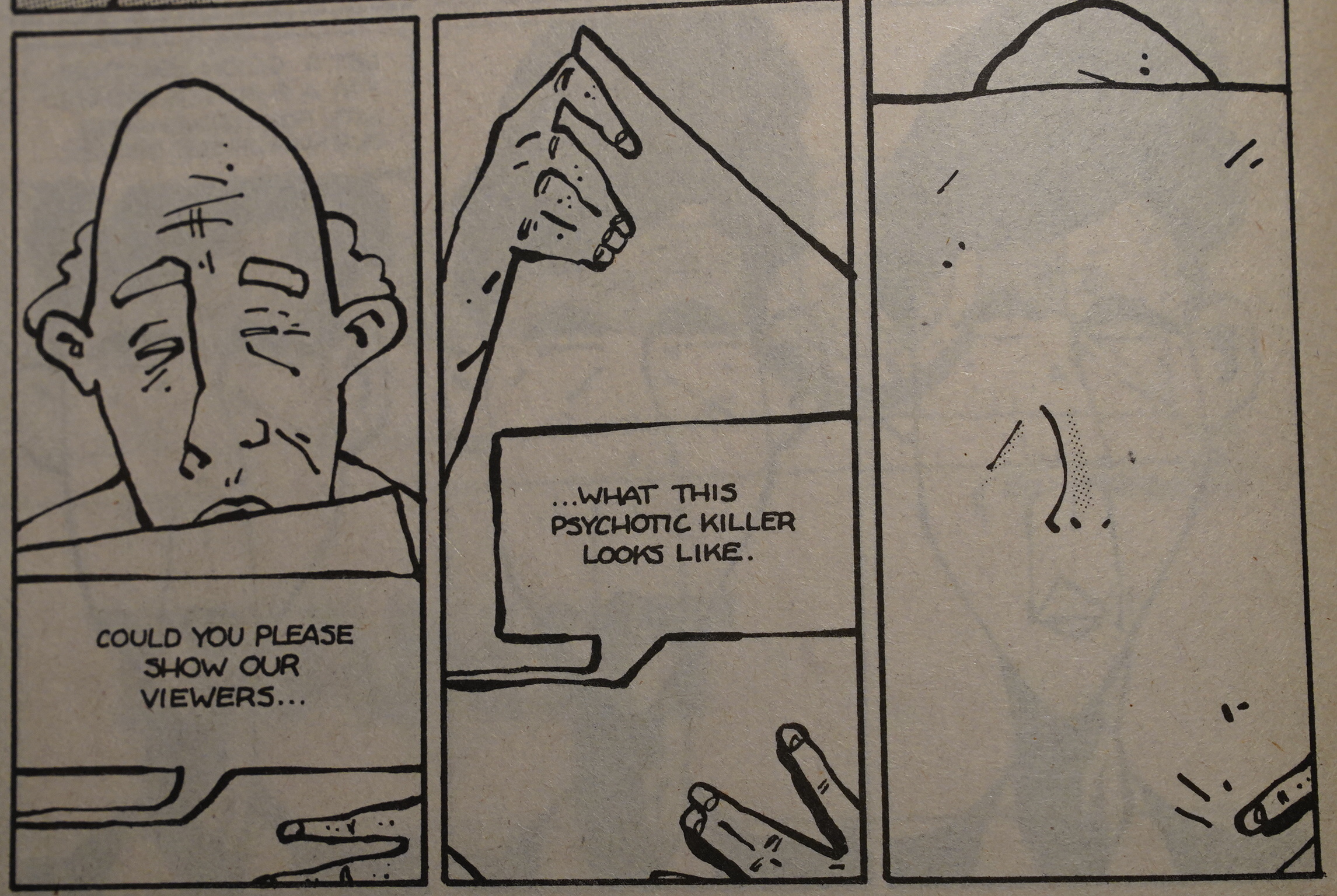 That’s a good joke (the artist isn’t finished drawing him; he just has the nose), but the newsprint that Vortex was using in 1987 was so bad that it kinda ruined the joke: It looks like a finished drawing because of the bleed-through from the previous page.

Or perhaps McKeever planned it that way! 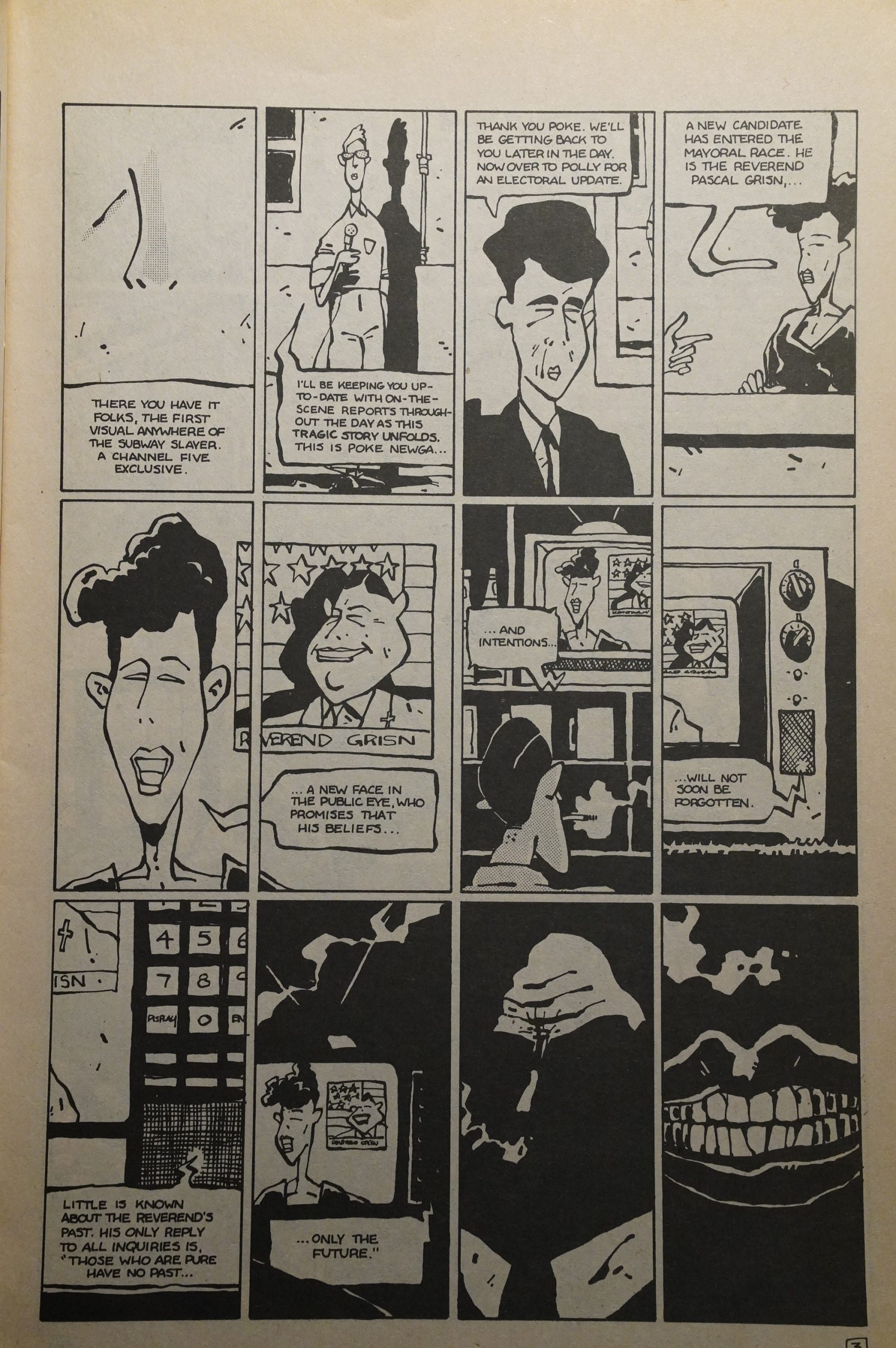 Anyway, McKeever’s artwork just gets better and better… he’s not at his style that won him fame and acclaim with Metropol yet, but it’s plenty fun. And the storyline is puttering away nicely, too: There’s political intrigue, and several intersecting plot lines, and interesting characters… 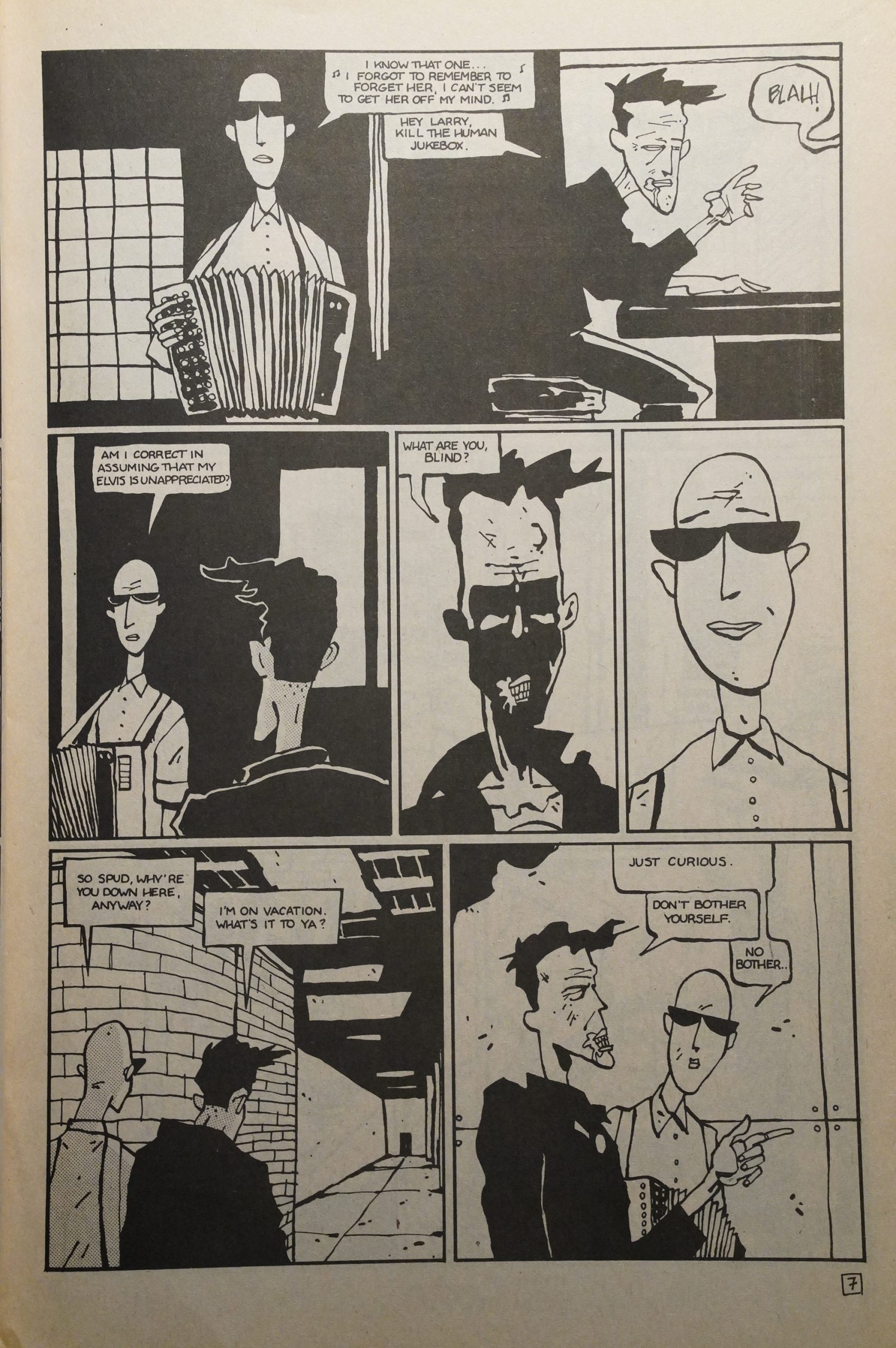 Oh! There’s that guy from Metropol AD that I was reading just the other month. I guess I knew that he was a returning character, but I didn’t remember that he was from Transit. In the McKeeververse, it all ties together… even if McKeever probably didn’t plan it out in advance. Nope. The teeth aren’t all there yet, but we’re getting there… 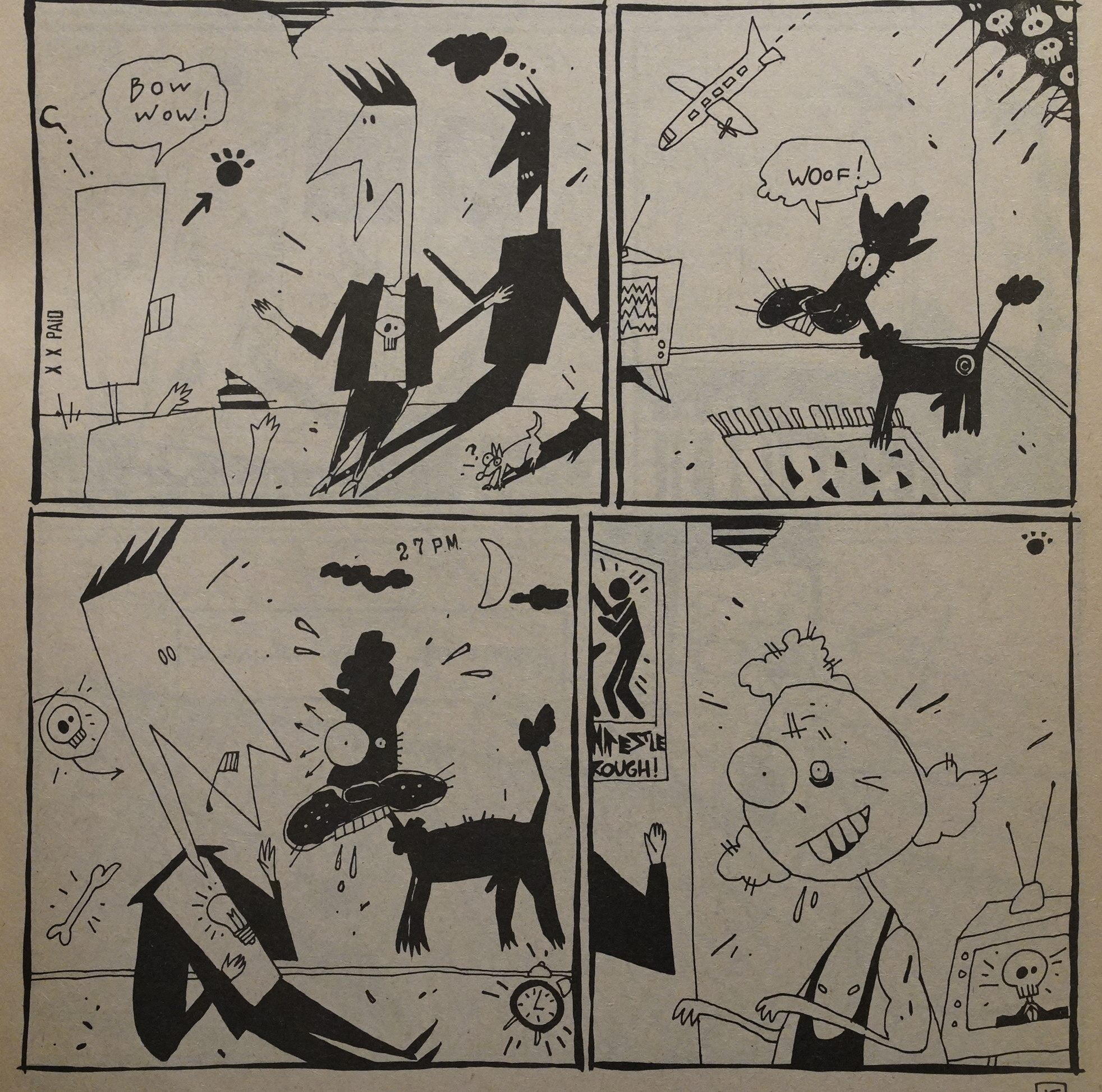 Heh. He should do more in this style. (This is from a dream sequence.)

In Stathis’ third and final introduction, he says that McKeever is doing a separate book over at Mad Dog, and that it’s… “more engaging” than Transit. 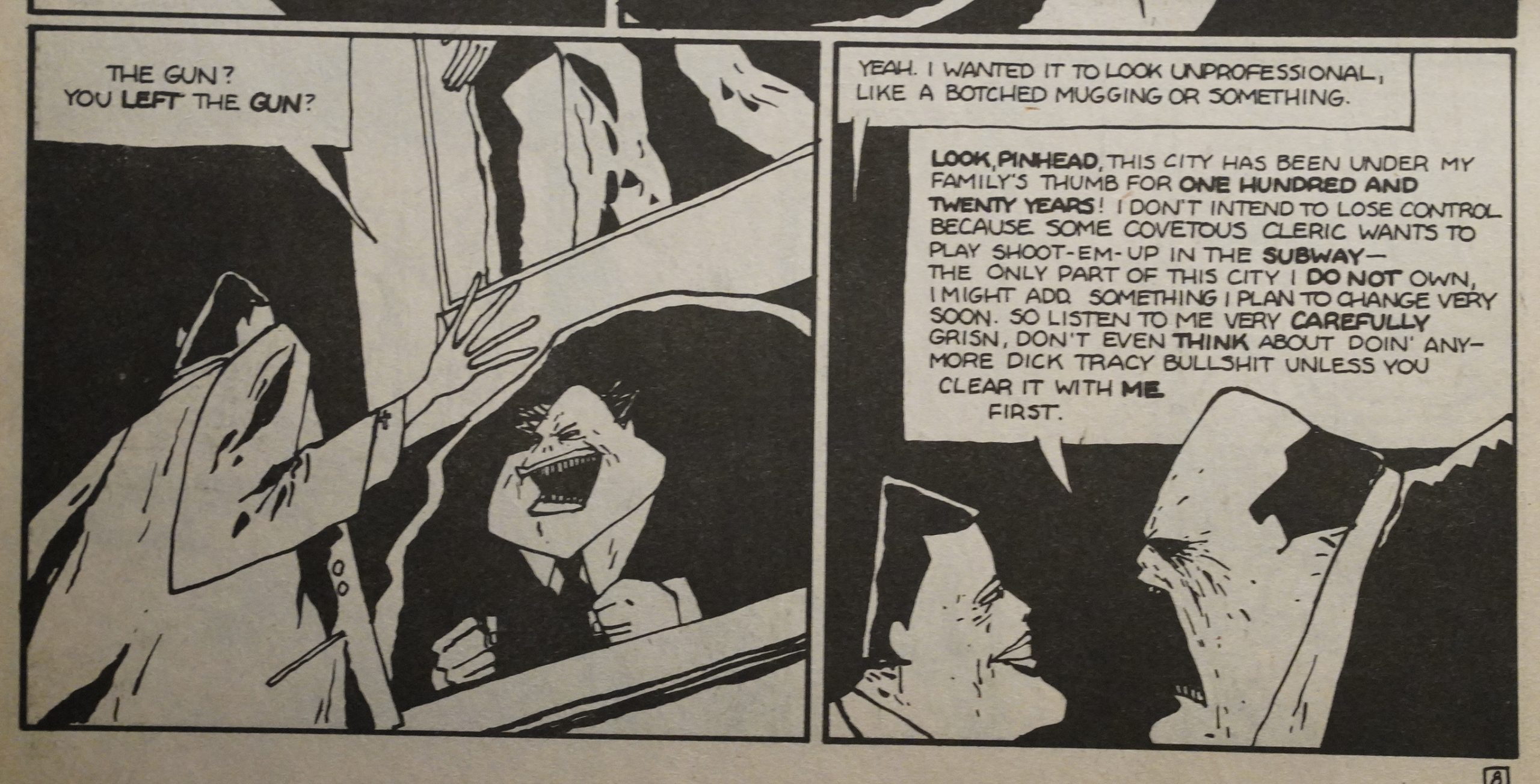 I’m wondering whether McKeever was having doubts about this book at this time. He starts putting in a lot of verbiage to explain everything… moving things along instead of letting things happen naturally…

Now the teeth are starting to pop! So to speak. 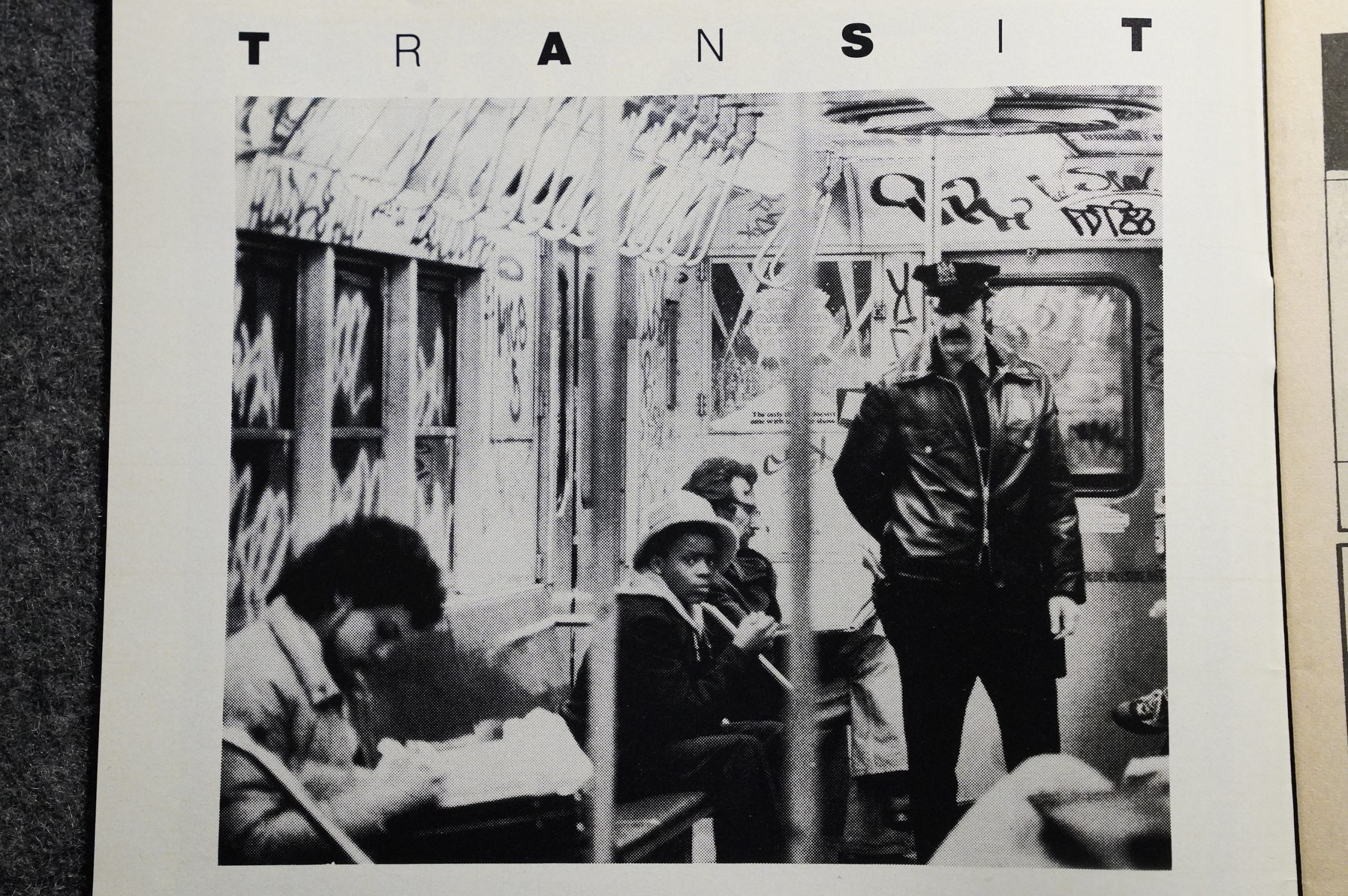 Hey, nice pic from the subway. That cop looks so… reassuring… 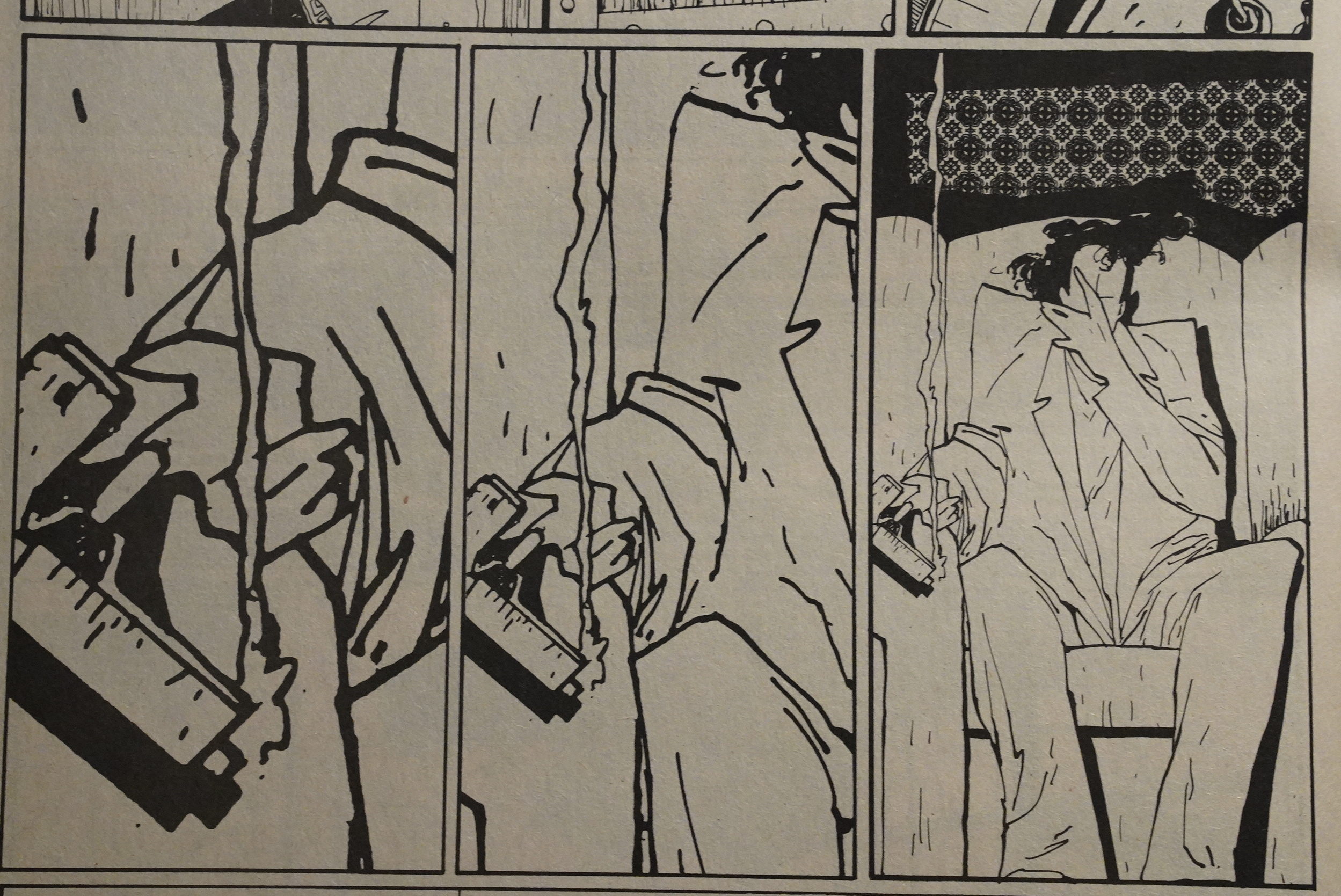 McKeever starts using the Xerox machine more, and more creatively. That zoom-out is pretty cool, with the lines becoming more fine-grained (because the panel to the right is the original drawing). 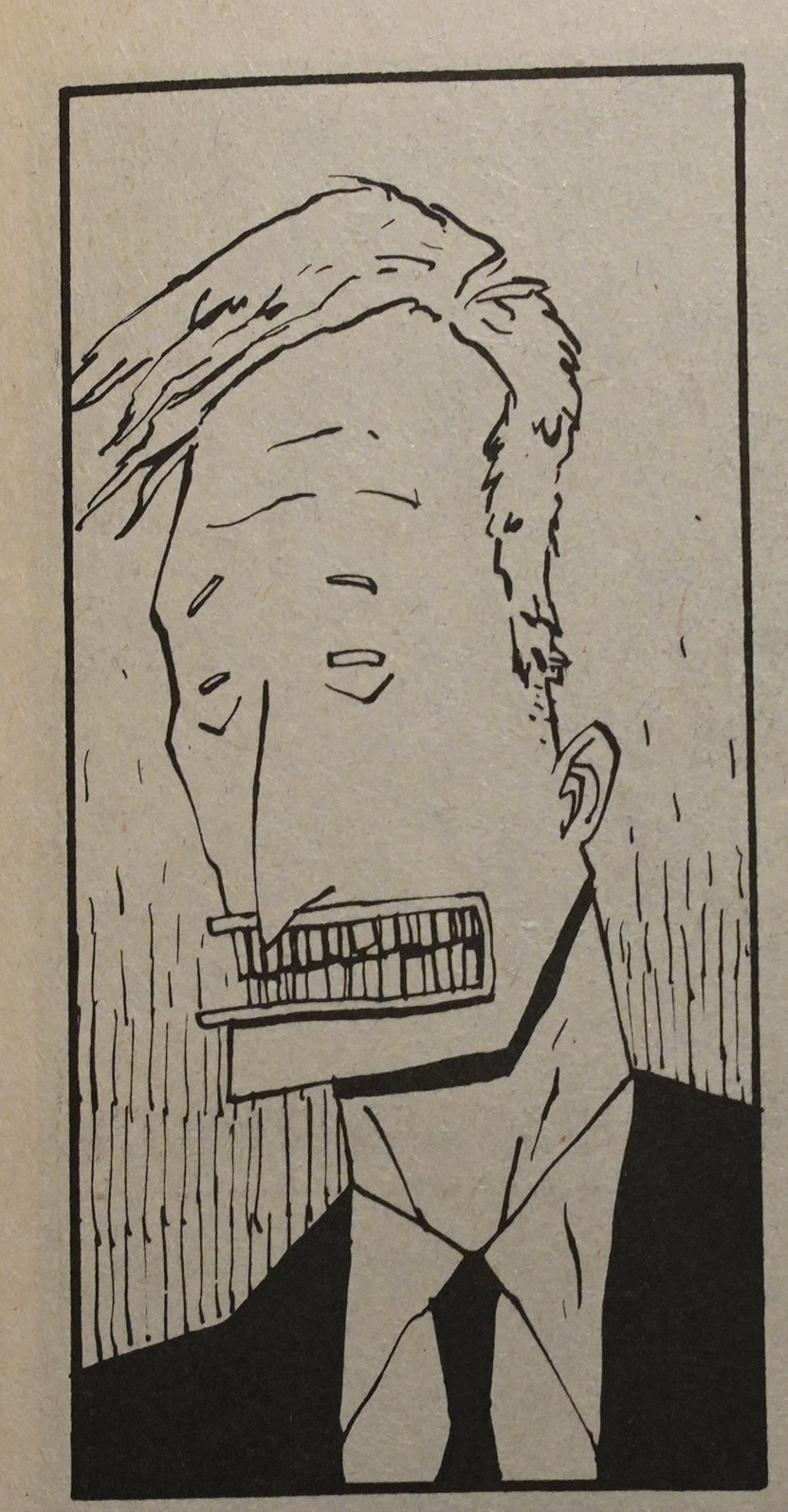 OK, we can all have toothy mishaps while trying to develop a style. 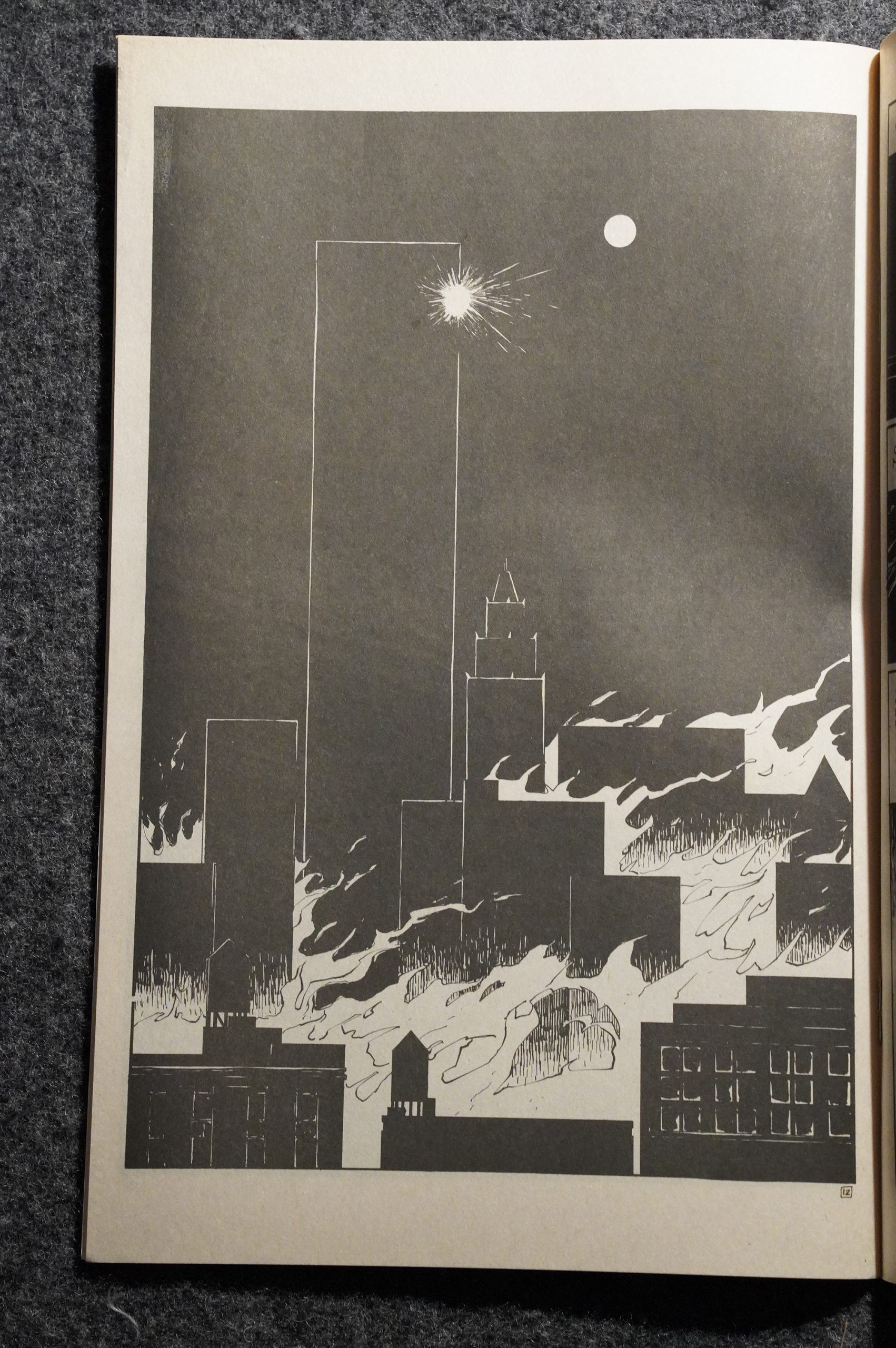 And then McKeever basically gave up: He kills off at least one central character, seems to forget most of the others, and just sets fire to all of New York. This is the final issue published, so it’s basically a variation of the “oh, god, I’m tired of this, let’s blow up the earth”.

But I may be wrong, because he did add an ending to this when Image reprinted the series in a collected issue a while back. And I have that collection here somewhere… but where?! I just can’t find it.

JEREMY PINKHAM: I’ll start didactically. How did you get
the opportunity to create Transit?
TED McKEEVER: I’ d been working on ideas and coming up
with different things while I was working at The Miami
Herald doing editorial art and working at the TV stations
doing courtroom sketches. There was a lot of political stuff
going on, a lot of news coverage based on corruption and
elections and so forth, and that was basically where my
focus was. At that point I saw there were stories to be told
that really delved into that kind of situation and didn ‘ t have
the necessity for, say, a superhero or someone who could
fly. There were interesting stories just based on reality. I
said, “Let me sit down and see if there’s something here.”
I was always fascinated with subways and trains, and
industrial stuff— and that’ s from childhood — and those
two things came together. I sat down and started to play
with ideas and write out some premises and different
situations. I would go to work in the morning, come home
around five o’ clock, and work on the book from about six
until about one or two in the morning. It took me three
months to do the first issue.

PINKHAM: I’ll step backfor asecondand ask whyyou didn ‘t
finish Transit.
MCKEEVER: Two reasons On that—and they just so happen
to coincide with each other. The book at the time was bi-
monthly; six issues basically took care of a year. So after
doing book two, I got a call from Mad Dog saying, “We
like Transit.” And I said, ‘Well, I’m already doing it for
Vortex,” They said, “Do you have any other ideas ?” I said,
“Well, I have this Eddy Current idea.” They said, “Well,
we have a slot in this book called Splat! , and we would like
you to do a short, five-page story. ” Those were the first five
pages of Eddy Current, book one, and that was it. It ended
with those five pages; it was just this little, odd short story.
When they got it in, they turned around and said, “We like
this. Does it go any further?” I said, “Yeah! It goes a lot
further — but you guys just wanted five pages.’ ‘ They said,
“Well, we’d like it if you could do more.”
So back then, as I still do now, I said yes. “Sure! I got
plenty oftime! Icould do two books at once.” Sol sat down
and did book two, three, and four of Transit immediately
and figured, “Okay, that takes care of six months. Now I’ll
do Eddy. ” Eddy started to take off and Transit was doing
fine, but Vortex then released two, three, and four within
almost a two-and-a-half-month period because, finan-
cially, they figured, “We could use the money. The books
are done. Let’ s put them out!” Which basically did nothing
for me, because there was no way I could do the two books.
I said, “I have five on the board right now; I’m going to
finish five, and then that’s it. I can’t do anymore.”
I had to decide between Eddy and Transit, and since
Transit was open-ended and Eddy was finished, as far as
story goes, I opted to go with Eddy. Also, Eddy, at that
point, started to pick up coverage and was starting to get
recognized. So I went with Eddy, more in the sense that it
seemed to be a little bit higher-profile. I figured, “Well,
this isn’t an open-ended thing, so I can end it.” My
intentions were to end Eddy and go back to doing Transit.
When I ended Eddy, then people started saying, “What
other ideas do you have?” And Comico said, “What do you
have in mind?” And I said, “Well, geez, I’d like todo this
book called Plastic Forks.” And they said, “Okay, fine!
You can do it in color!” So I said, “Goodbye, Transit!”
[laughter]

Here’s some cool ads for Transit: 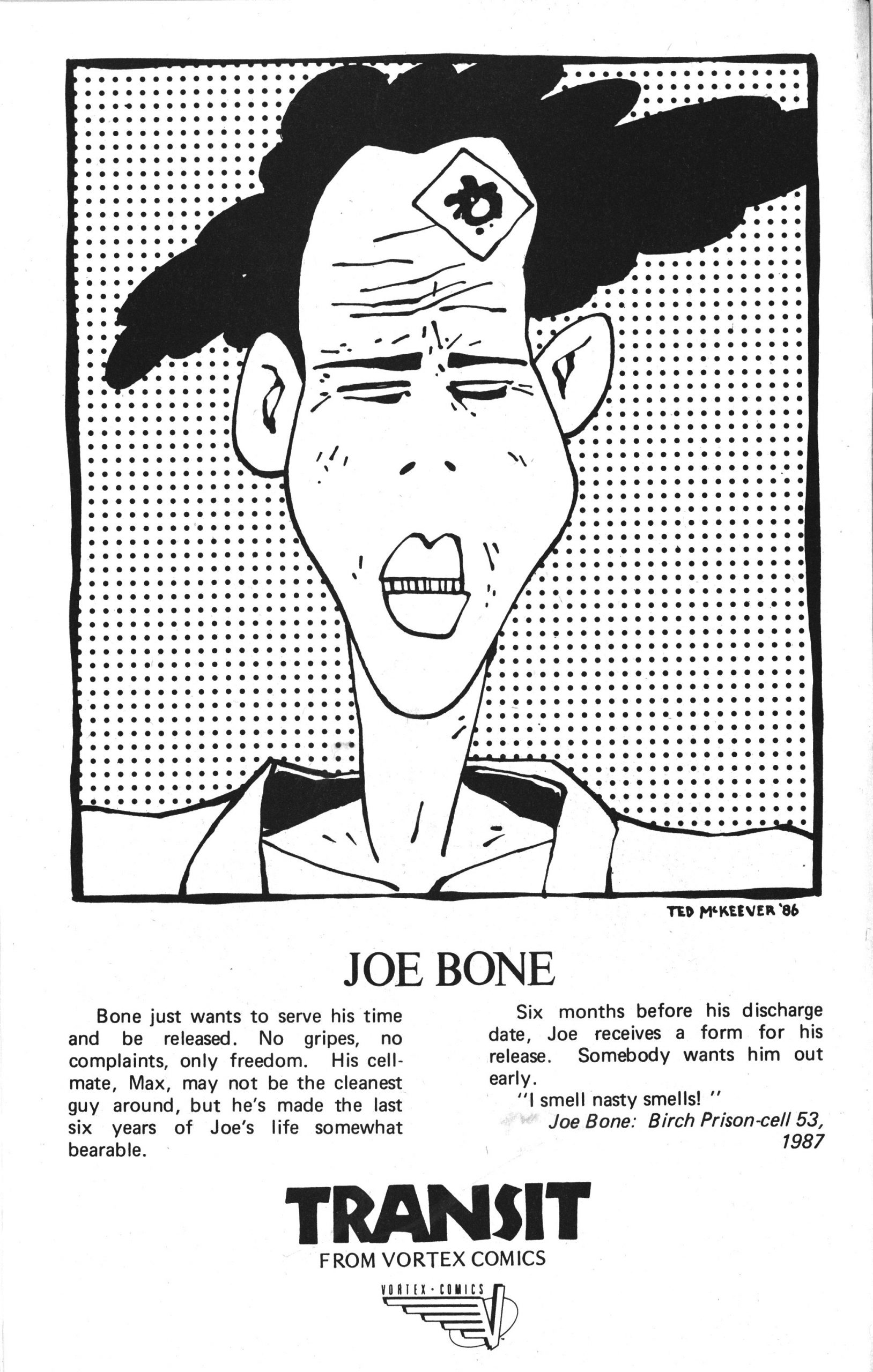 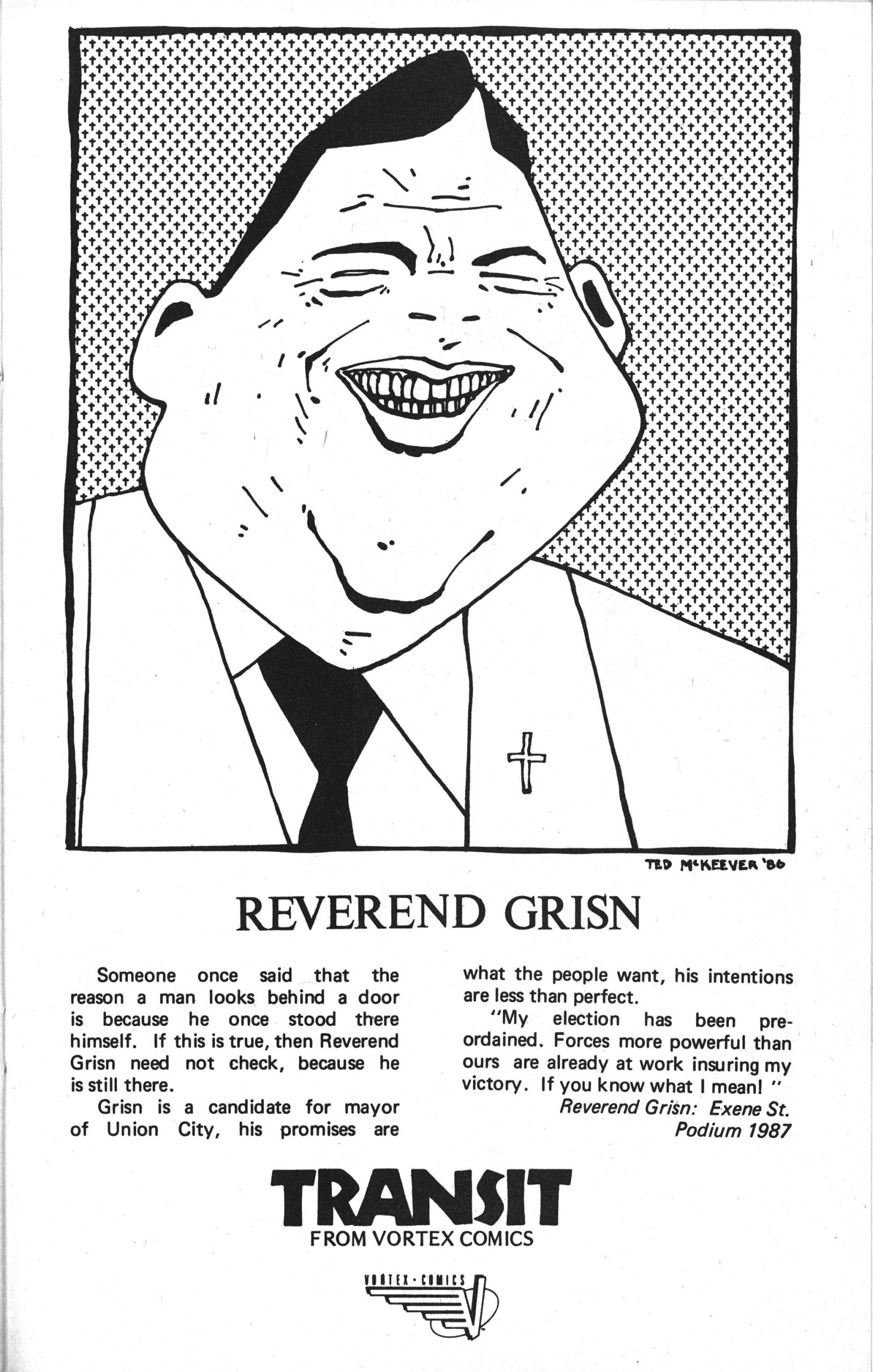 In #4, if you recall, Spud was indoctrin-
ated into Reverend Grisn’s Church of the
Slack. “He dresses nice, his hair is cut—-
he’s kind of scary,” says Ted McKeever.
His involvement in the next issue is
minor, as he travels with thee rest of
Grisn’s “mognies” and makes speech-
es. Grisn and Boss Traun take center
stage in a major discussion that reveals
more of their motivations. It all leads into
#6, which contains Grisn’s last speech
before the mayoral election. Meanwhile
Joe Bone, the ex-con hit man, has been
dispatched to assassinate the candidate
by one of Traun’s minor rivals. The bulk
of the issue takes place on the elevated
train platform Bone has chosen for his
vigil. Somebody dies.
In #7 Spud is brought into the seedier
side of the city by Bone and depro-
grarnmed. They link up with Rex, the
pimp who had hired Bone. All goes well,
considering, but Traun is an ever-present
danger. He will remain a threat farther
down the line. “I don’t uant it to be a
book where the villain poses a threat that
is dispersed later on. It usually goes,
‘Well, whoops! He almost made it.’
Again, Transit is a book where the
villain is going to win at some point.”
The issue with Traun triumphant is most
likely to fall between #9 and #12, and
will almost definitely be a full-color
issue., Watch this space for further
developments.

OK, so McKeever did have further issues planned.

Here’s a review of the collected edition:

Transit is not a tightly plotted book: it starts from Spud and the nasty mayoral election, and wanders around its grimy city from there, bringing in more oddball characters and bouncing between energetic scenes that don’t always completely track to each other. It always makes it way back to Spud and the evil guys eventually, more or less, but each loop seems to have less and less to do with the initial setup. And then, of course, we hit the “lost finale,”a series of quick scenes of the characters, to close out all of their stories and provide something like an ending. I don’t think it’s the ending McKeever was aiming for back in 1988, but Transit feels like a book that was plotted as it went along, so I may be making an unwarranted assumption to say he was aiming for any particular ending.