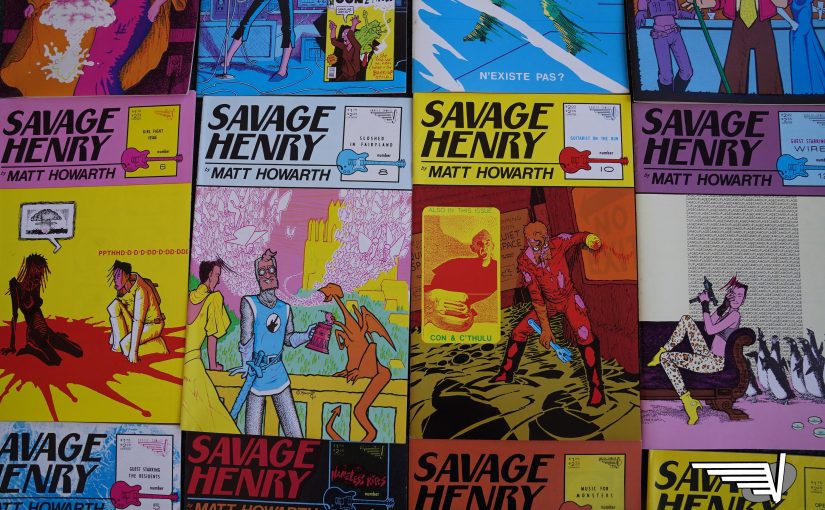 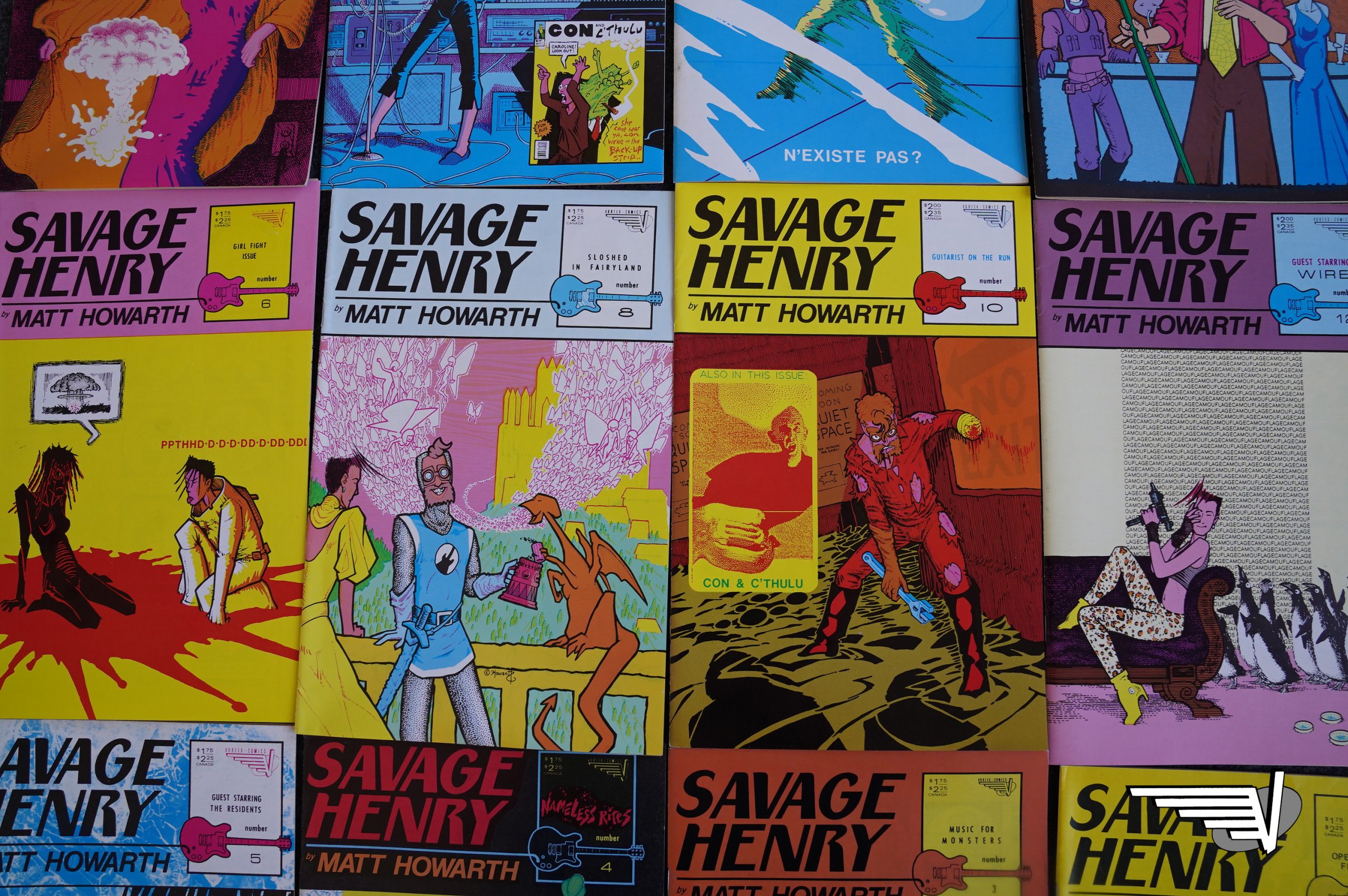 This series is a spin-off from Those Annoying Post Bros, and is, if I remember correctly, less concerned with atrocities and more fun? At least that’s what I’ve gleaned over the years — I’ve been picking up an issue here and an issue there, but I’ve never read Savage Henry in sequence. And some of these comics I haven’t read at all.

So let’s read the first three pages together. 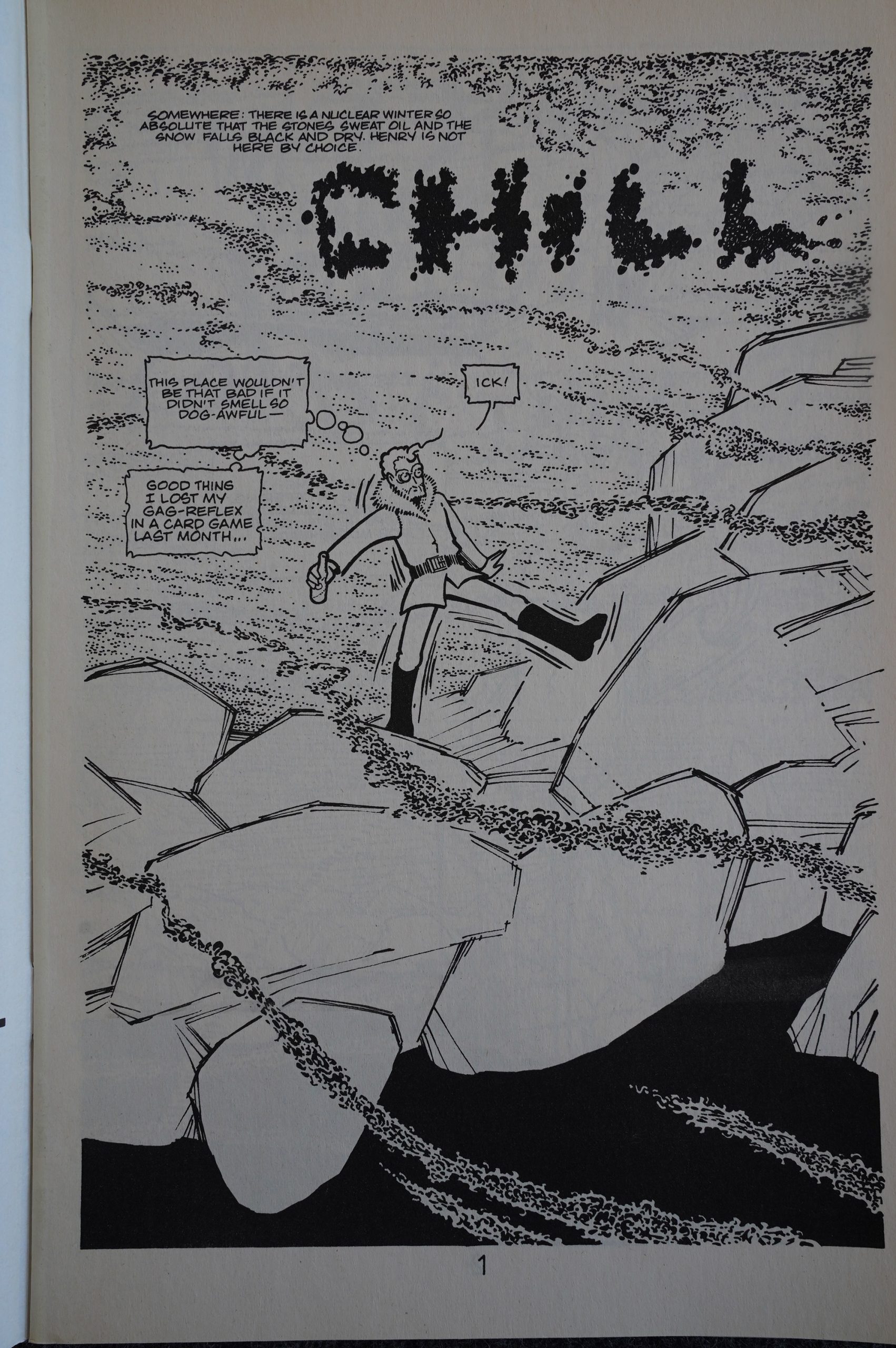 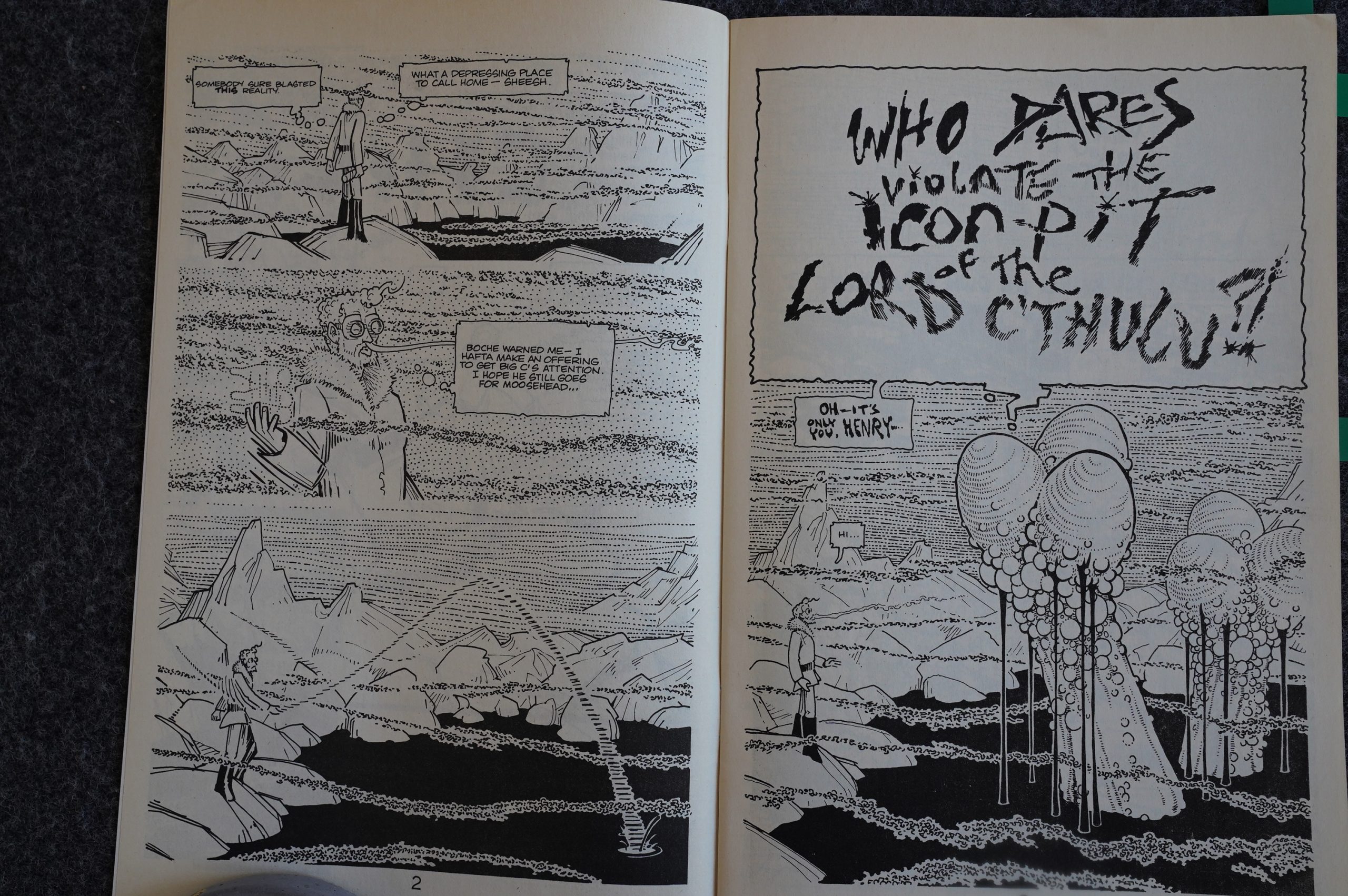 The artwork is Howarth’s usual slightly obsessive one, but look: Not even a single being is tortured on the first pages! Was I right or was I right?

Is Howarth spelling Cthulhu that way to avoid getting sued or something? I thought Lovecraft was in the public domain anyway… 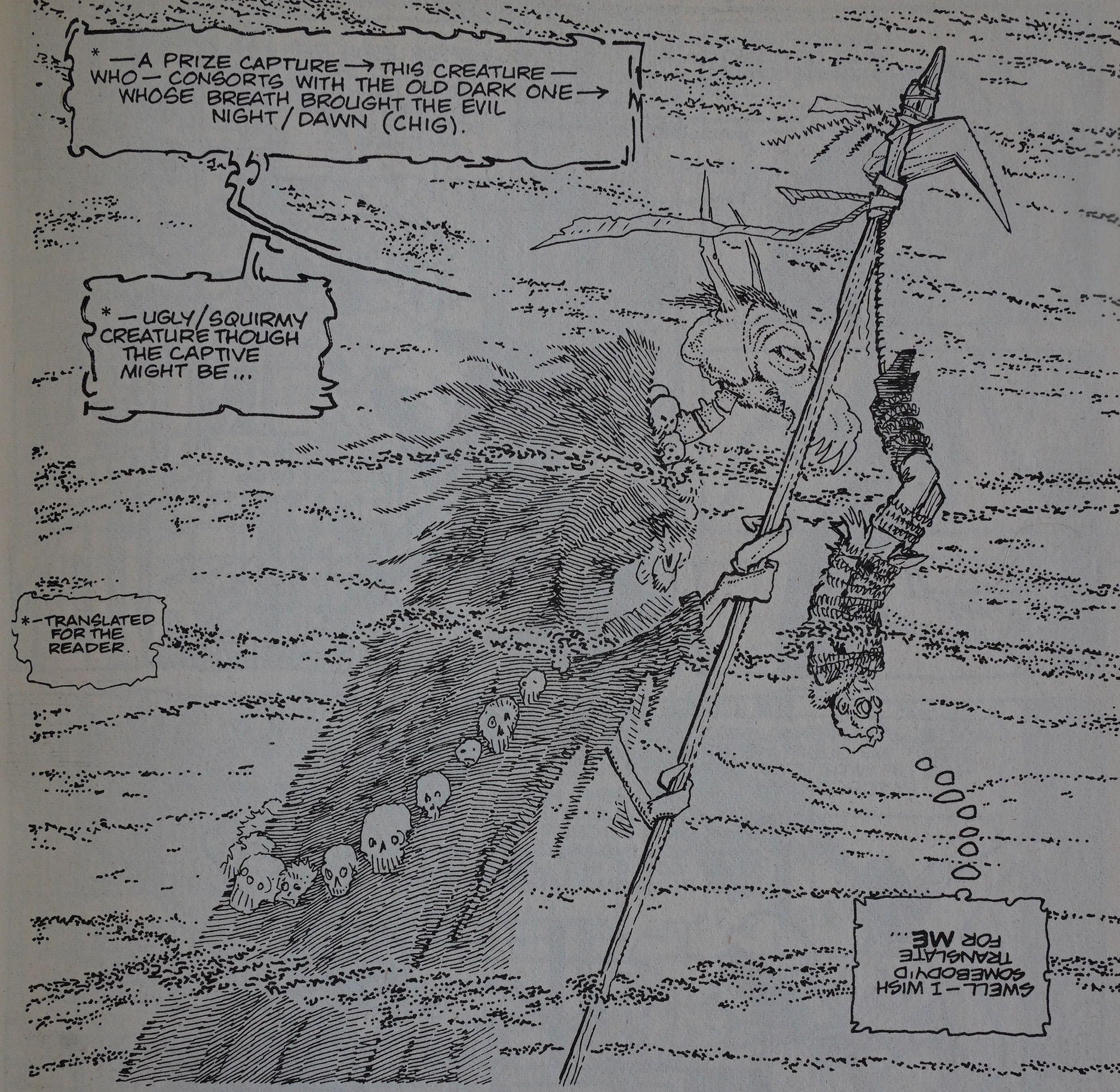 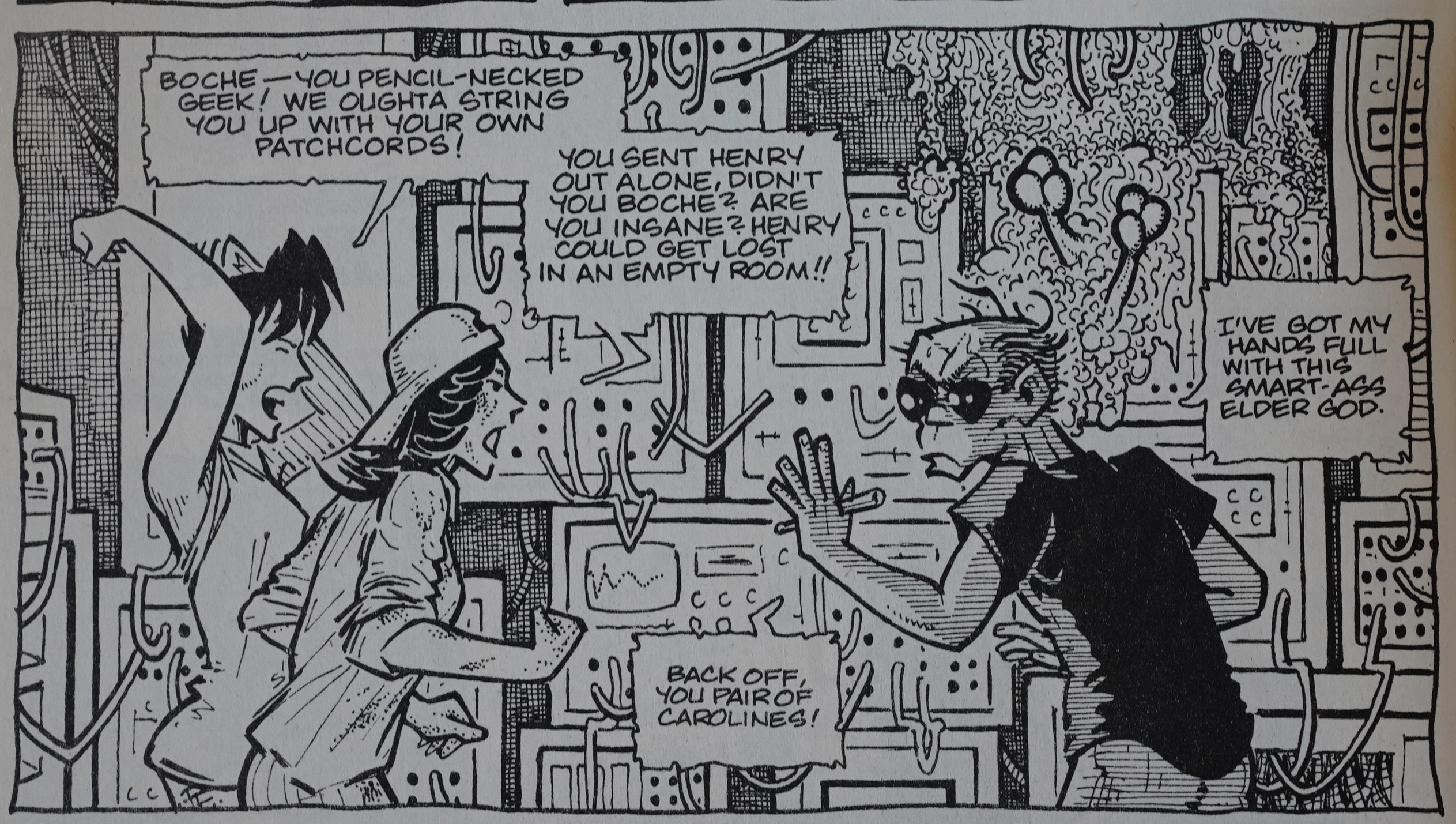 Oh, yeah, perhaps I should mention what the book is about. It’s about a band called the Bulldaggers, and Savage Henry plays guitar there. That’s some of the other members of the band: A couple of Caroline clones, Boche and C’thulu.

It’s a pretty solid set-up: A band is a malleable gang, and they can go on adventure (and tours), and they can meet other musicians… which is a gimmick Howarth leans into hard. 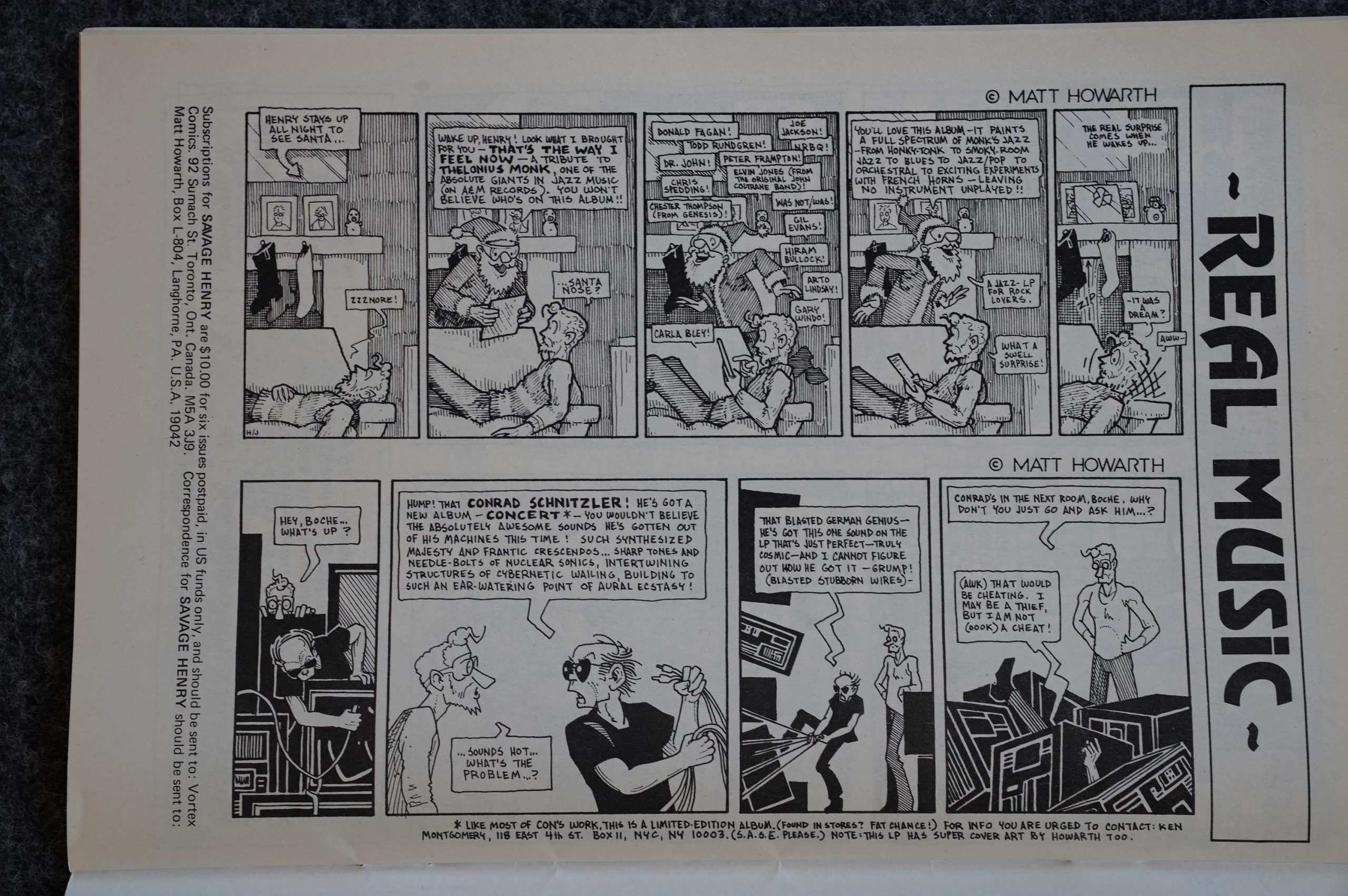 Howarth also reviews albums that exists on this reality plane in the back of the issues. At least I think they exist… like that Monk tribute? With Arto Lindsay? And Joe Jackson!??! I have to check. 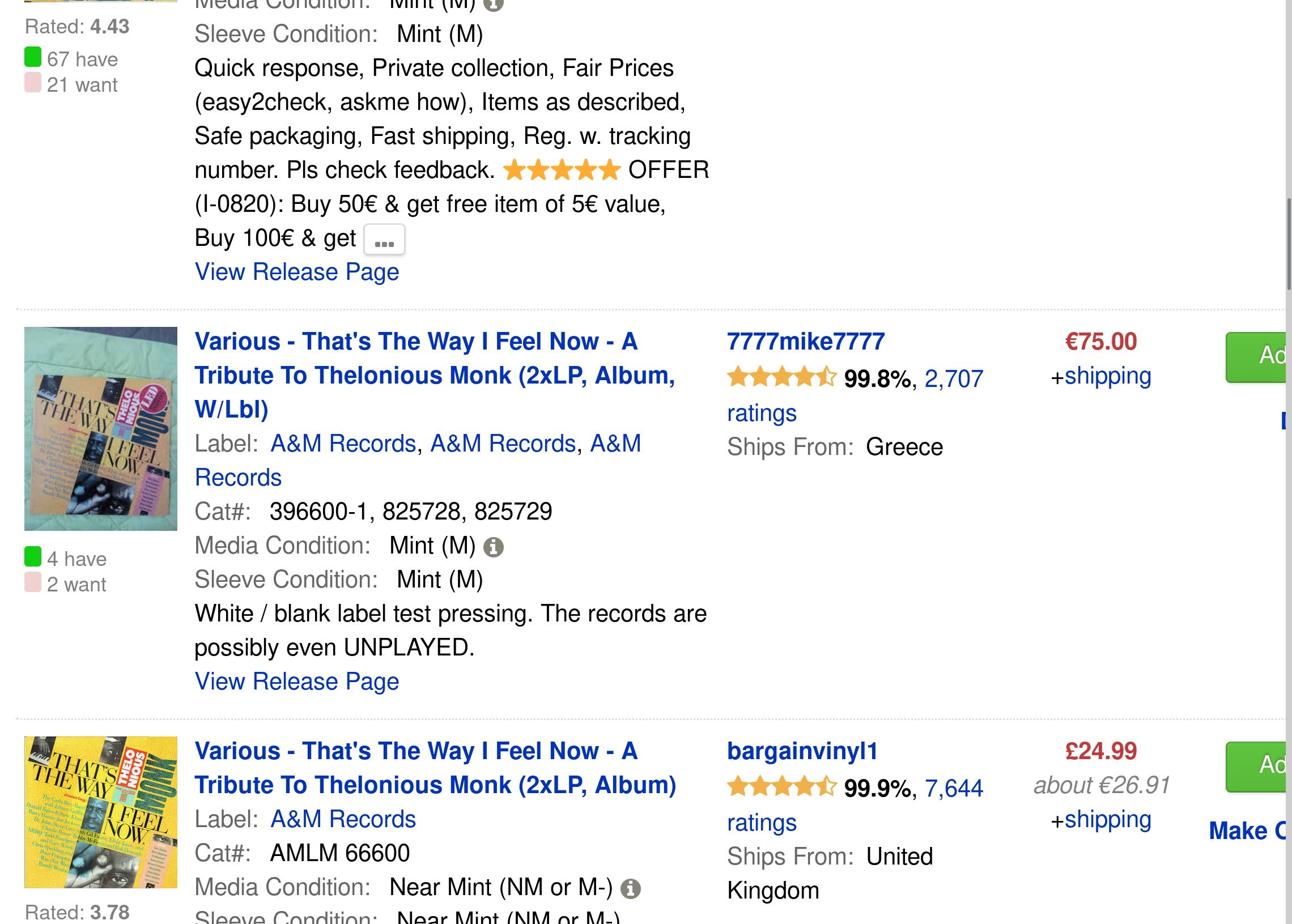 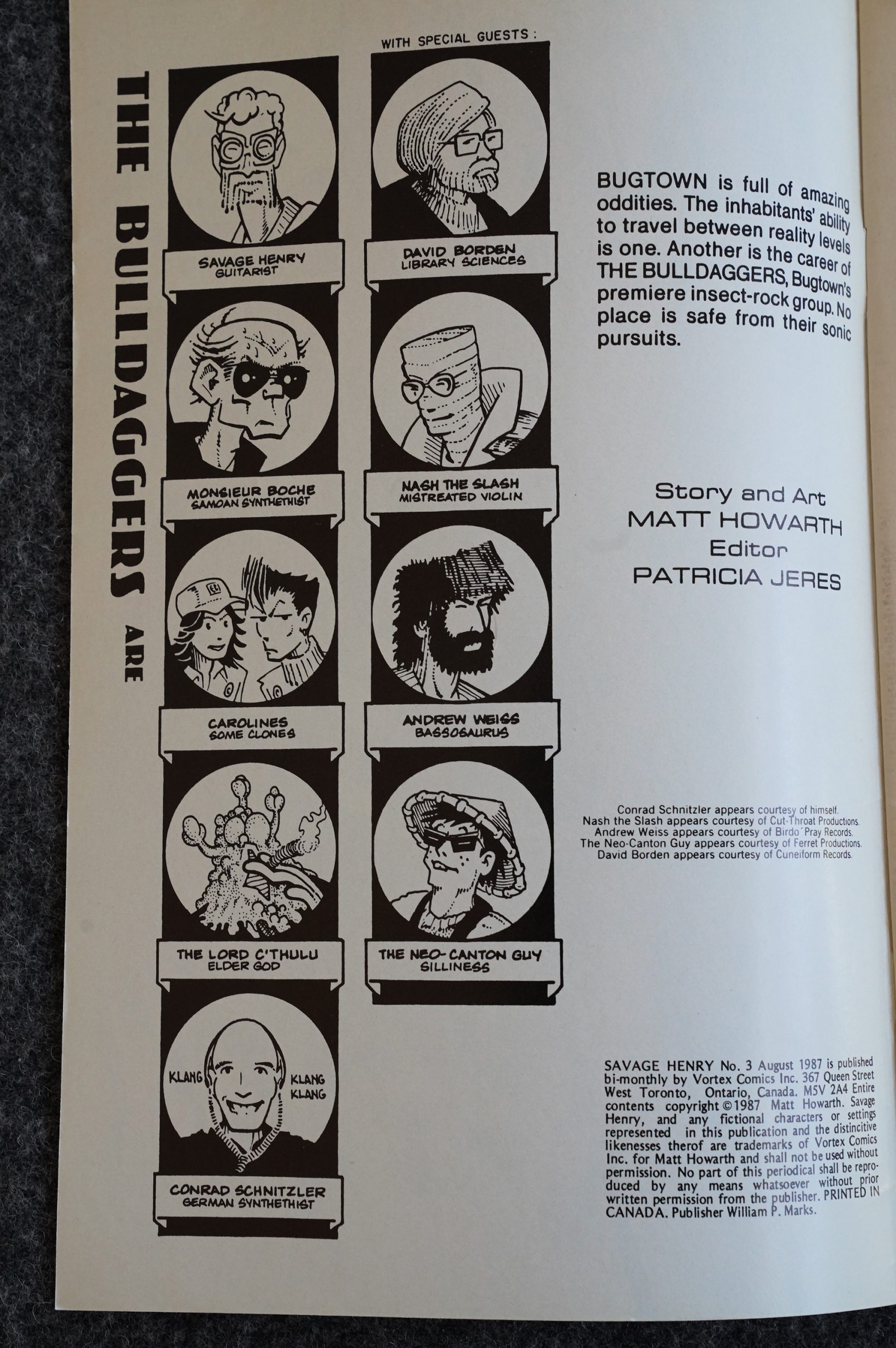 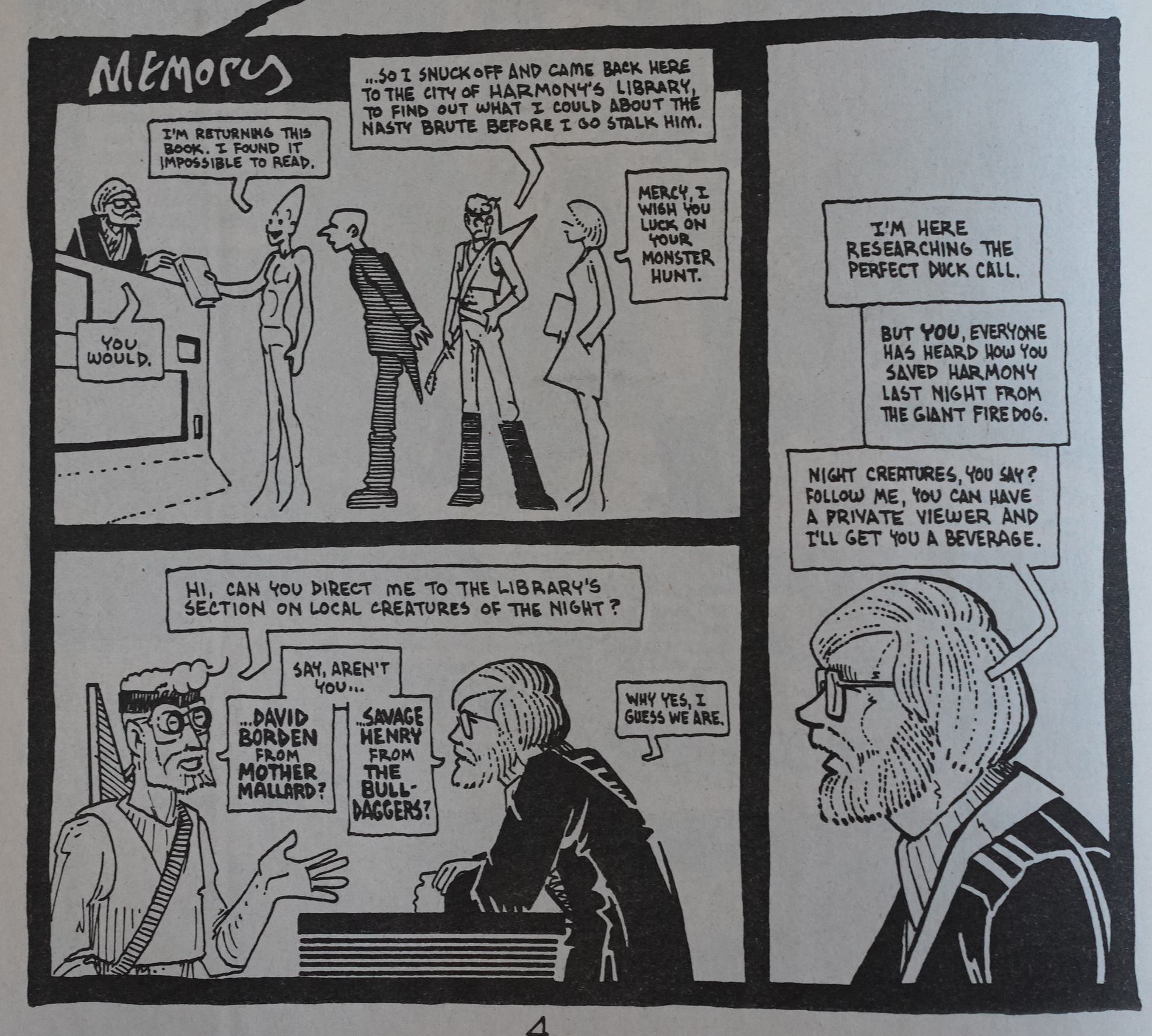 He has some real musicians that are reoccurring, like Nash the Slash and The Residents, and they play a real part of the plot. The other guest appearances are mostly… pretty stilted and superfluous. And without much character — I guess Howarth doesn’t feel as free to make them do outrageous things, which might make the real musicians pissed off? Oh, I thought there wasn’t going to be any atrocities in this. 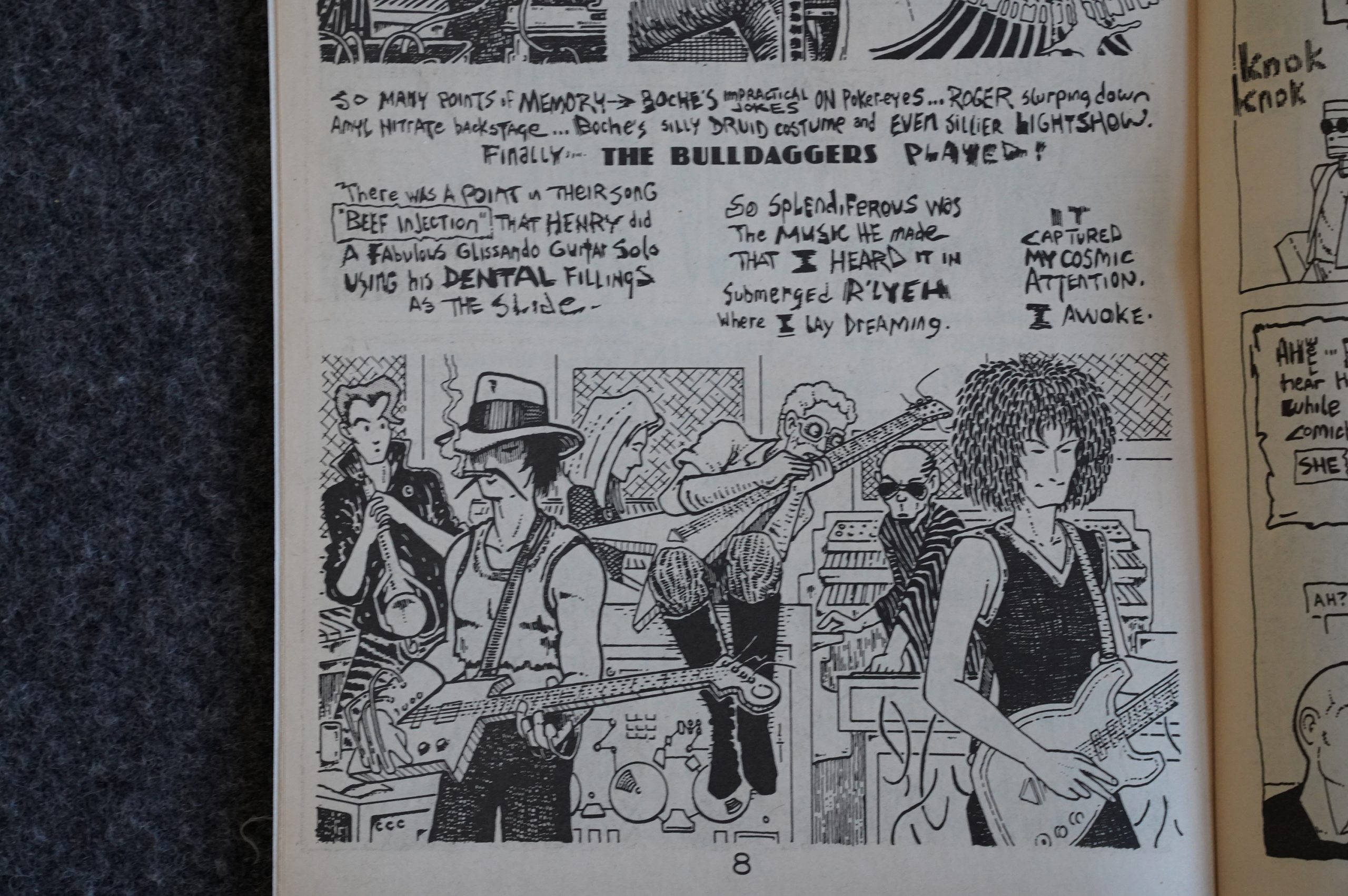 Which is really unfortunate, since issues #2-7 is one long epic; probably the most epic epic I’ve read from Howarth. It’s all about how Hiroshima, the nuclear goddess, wipes out Bugtown, and how a Caroline clone fights her. It’s kinda like a horror story, in that the tension is real, and it all seems to overwhelming… 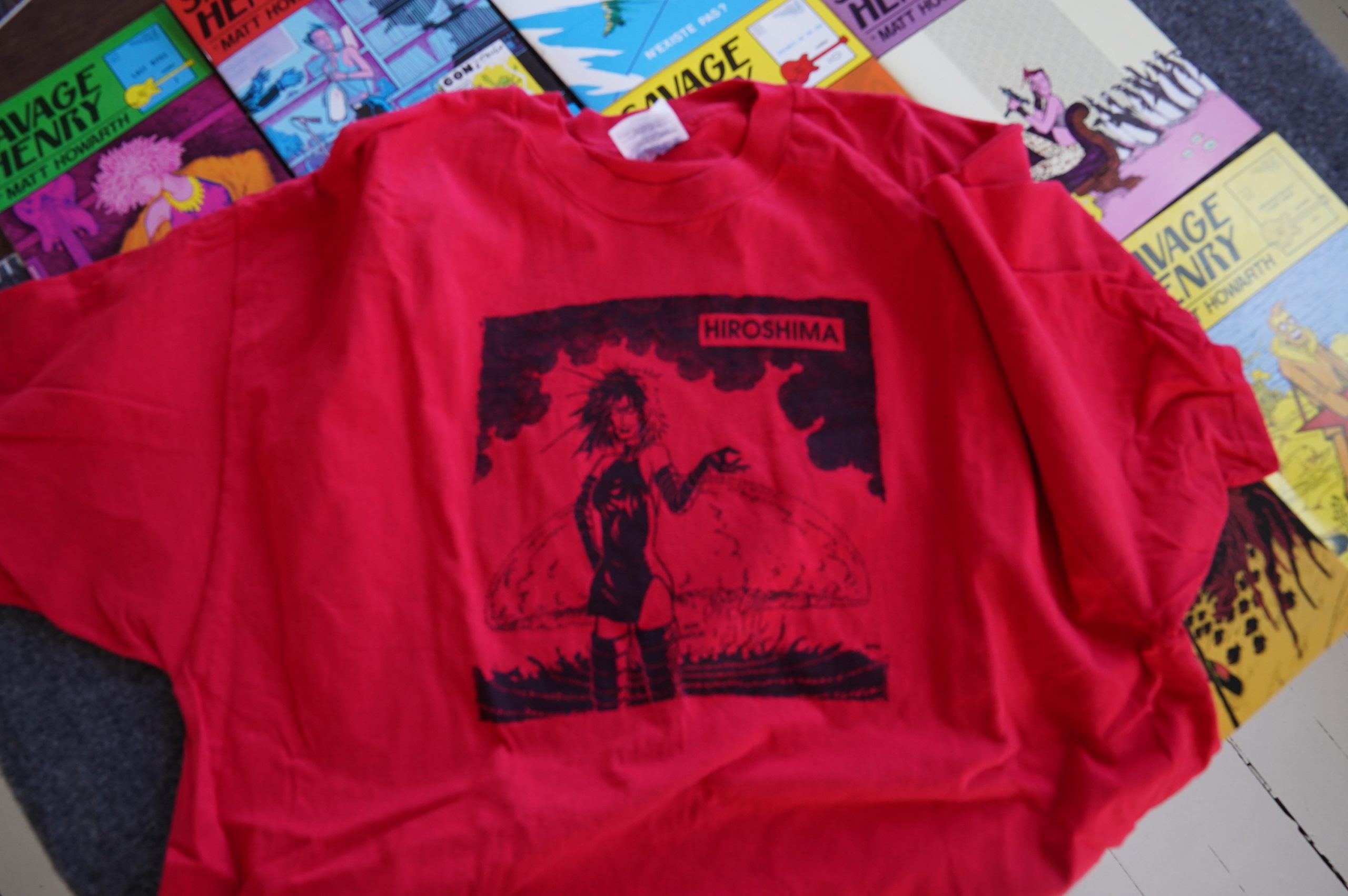 Which reminds me… I’ve got a Hiroshima t-shirt… that I don’t use a lot, because it’s in kinda bad taste, eh? But it looks cool. Howarth experiments a bit with alternate rendering techniques in an issue here, which is kinda unusual for Howarth? It’s fun, although his normal rendering style is awesome. 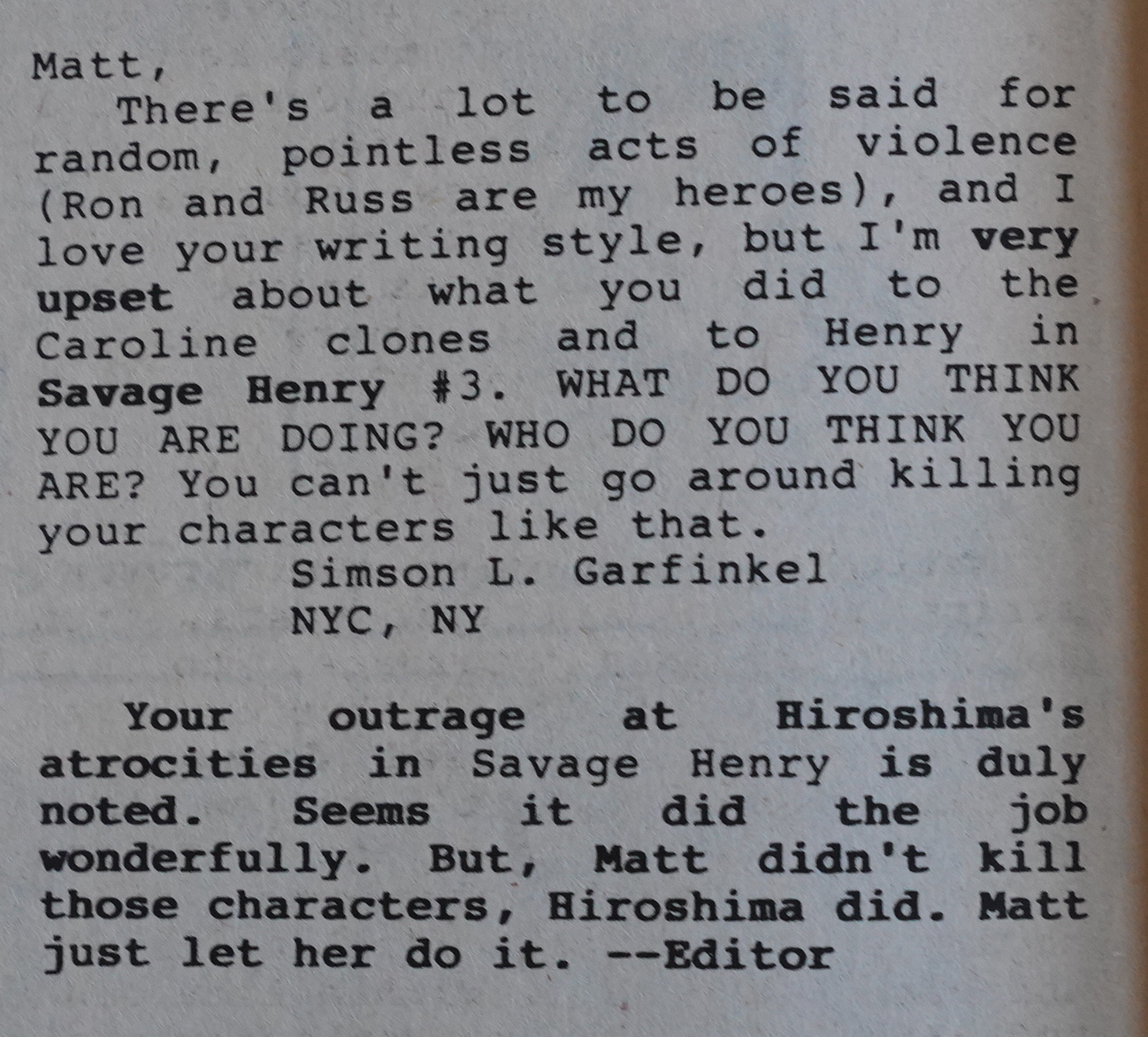 As if it’s not enough with the music references in the comic itself, we also get a snapshot of what Howarth is listening to. I think… I’ve got… like three quarters of those albums? Howarth’s taste in music is the best. Howarth is very productive, and I guess using cheap tools saves a lot of money… After the big epic is over, we get a somewhat whimsical issue as a breather. It’s nice. Unfortunately, Howarth also starts a series in the back of the issues called Con & C’thulu. (He’s also got a series called Konny & Czu, but Conrad Schnitzler doesn’t appear in that one.) I say “unfortunately” not because it’s bad or anything, but it takes space away from the main Savage Henry serial, which I thought had picked up speed and drive, and seemed to be going somewhere. But I think Howarth had basically run out of enthusiasm for Savage Henry. Structure basically disappears, and everything becomes meandering, and we even get more music reviews in the middle of the Savage Henry serial…

Professor Ed is the deux ex machina — he controls all realities, and can rewrite them, which is a convenient get-out-of-plot-conundrums free card. And what he’s saying there is… that’s really… creepy. (Plex is Ed’s lover.)

So I was wandering whether this was building to a major Strike Against God kinda rebellion, but it just goes nowhere, really. Instead we get an issue with The Wire. Howarth is somewhat awkward when drawing real people (they look a lot less real than his imaginary characters), but that’s a very good Graham Lewis.

Howarth usually reviews albums from the bands he features in the main stories. As you can imagine, they’re all positive. In fact… I think Howarth only writes about music he likes? Well, why not? The final Vortex issue seems totally phoned in: The plot is a non-sequitur, and the artwork looks half-assed. I think Howarth was having problems getting money out of publisher Bill Marks at the time, so perhaps that has something to do with it. Half the issue is a reprinting of a story Howarth created a decade earlier. It’s OK.

And that’s it. Series over… except that Howarth then took the series over to Rip Off Press, where it continued for at least a dozen more issues, and after that there’s been a bewildering number of mini-series featuring Savage Henry. I’ve got a goodly stack of these, and I vaguely remembering it continuing on in this vein: A bunch of guest appearances by real bands, and a lot of goofing around. Some good issues, some bad, but… it doesn’t really go anywhere?

I may be misremembering.

Wow! The Last Remaining Caroline
Clone has discovered she can now
shift between• realities and is
conspiring with professor Ed’s Max
drones to rid Bugtown of the insane
nuclear goddess, and ex-Bulldagger,
Hiroshima, who has blown up the
whole reality level and shaped it in her
own image! The Residents, Cthulhu,
Savage Henry, Nash the Slash and the
Neo-Cantonese Guy are all dead and
living inside Hiroshima’s pocket uni-
verse! Is Hiroshima really defeated or
are our heroes (and anti-heroes) in
deep doo-doo, as the last page
suggests? I can’t wait for #7 so I can
see how this comes out!
What? You didn’t foll(N any of that?
Well, I hate to admit it, but unless you
have a working knowledge of
Howarth’s previous tales of Bugtown
and experimental music, you’re going
to be left scratching your head with
this one. The only thing more con-
fusing than walking into a Howarth
storyline cold is picking up a Marvel
mutant crossover. Despite this,
Howarth is probably the most
innovative comics creator working
outside the major commercial houses.
I’ve been a fan of his since Changes
was serialized in Heavy Metal nearly
ten years ago (yipes!). He also writes
the toughest and smartest females of
all reality, in the persons of the
ubiquitous Caroline, Clones.
Howarth’s graphic manipulation of
imagination and his unconventional
attitude toward storytelling conven-
tions makes his work one of the few
things I can look at and say, ‘ ‘BW, this
is gonna be good!” Give Savage
Henry (or its quasi-companion book
Those Annoying Post Brothers) a look
and maybe you’ll see what I mean…
GRADE: MINT

[…]
And when you’re talking frustra-
tion, you’re talking the Howarth
Woman. They’re rather like the
women you meet in the real world,
pragmatically exasperated by the
posturings and obsessions of the men
around them, unable to understand
why we’re unable to function like
reasonable, adult human beings and
convinced that on the bottom line
they ‘II have to keep the whole insane
mess together until we come to our
senses or no one will. Howarth’s skill
with expression is given its fullest
play here: one time or another we’ve
all been on the receiving end of one
of those annoyed stares or the lucky
recipient of one of those surprised,
delighted smiles.

AH: I See in Savage Henry that
Hiroshima’s back. There’s just no
getting rid of those pesky goddesses,
is there?
HOWARTH: 1 have a real soft spot
in my heart for Henry, which pro-
bably shows in the work.
Now with Hiroshima, I have a real
large ulcer in my brain for her. It
bleeds all the time. It was complete-
ly unintentional for Henry to begin
with a long continued story, but—
literally the minute I knew that my
mystery villain was going to be her—
it overtook me. I went off into a ma-
jor binge. I did a lot of reading in the
occult, not for reference but to put me
in a real evil frame of mind.
She’s back again, yeah. From your
point of view she’s back again,
because you’ve read some of the
earlier publications, which not every-
one out there has read.
AH: A lot of people aren ‘t going to
know what she is; why she’s there.
HOWARTH: That’s why I had that
flashback scene in number four to talk
about the old days, with her being an
ex-member of the Bulldaggers.
AH: C’thulu smokes and reminisces.
HOWARTH: Oh yes. 1 clearly see
C’thulu smoking stogies and having
the gaudiest, tackiest ties you can
imagine.

This blending of music and art is
a personal vice. Being able to have
the Bulldaggers regularly in the
Savage Henry comic pleases me
immensely. And now, Conrad
[Schnitzler] is a member of the
Bulldaggers! Having one of the
founding members of Tangerine
Dream in my nonexistent band from
Bugtown–this is a crowning
achievement.
AH: Among the many unusual things
about your work, the introduction of
so many real people, mostly musi-
cians, stands out. Do you do it as a
tribute to them, because they fit the
stories you tell, or just because it’s
a strange thing to do?
HOWARTH•. Why can’t it be for all
three reasons? I enjoy blurring the
distinctions between the real world
and realities in my work.
AH: Has being an innovator, both
artistically and structurally, helped or
harmed you in the long run?
HOWARTH: What long run?
[laughs] I’m just getting started,
building momentum. Remember: ‘It
may stop, but it never ends.’