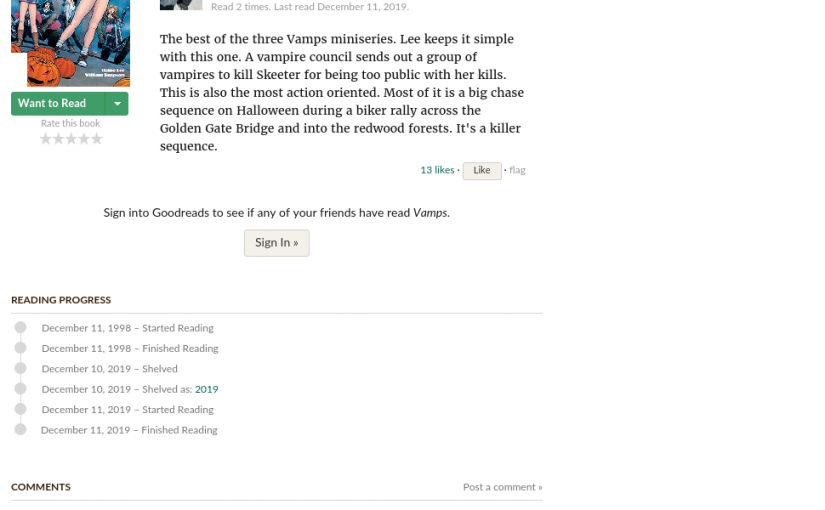 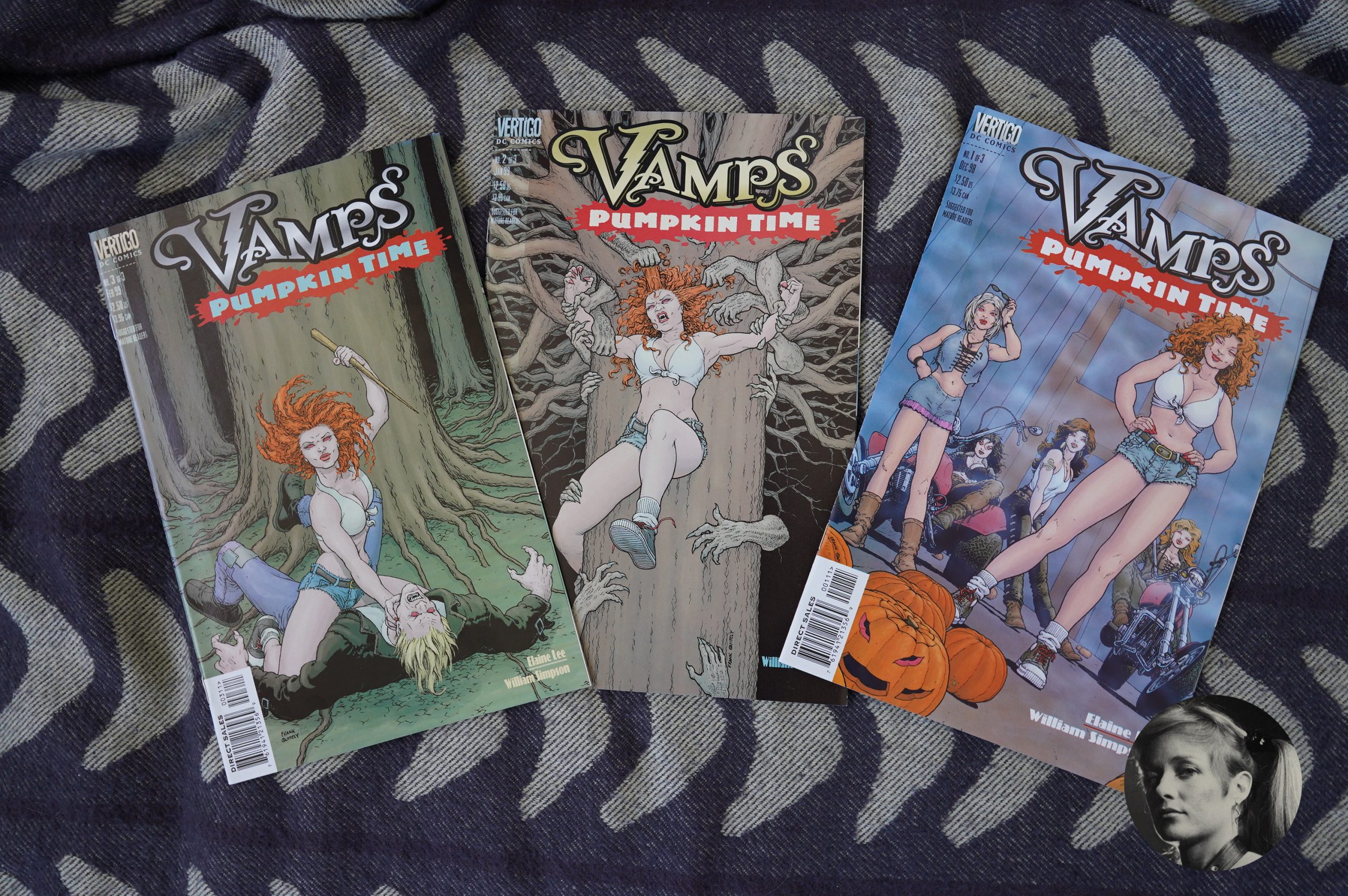 Vamps: Pumpkin Time #1-3 by Elaine Lee, William Simpson and others, published by DC/Vertigo.

This is the third and final Vamps mini-series, and I wrote about the first one here and the second one here. 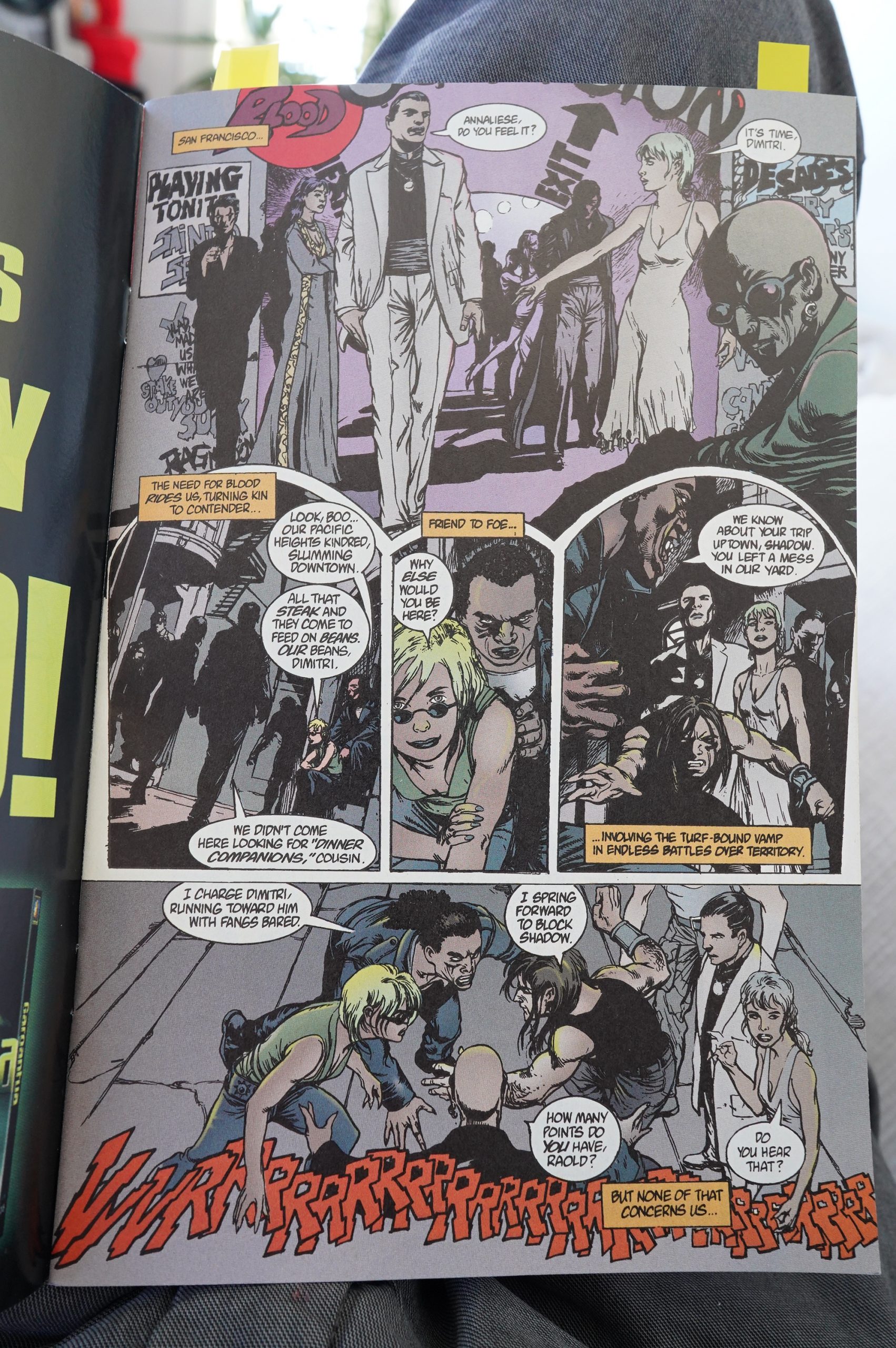 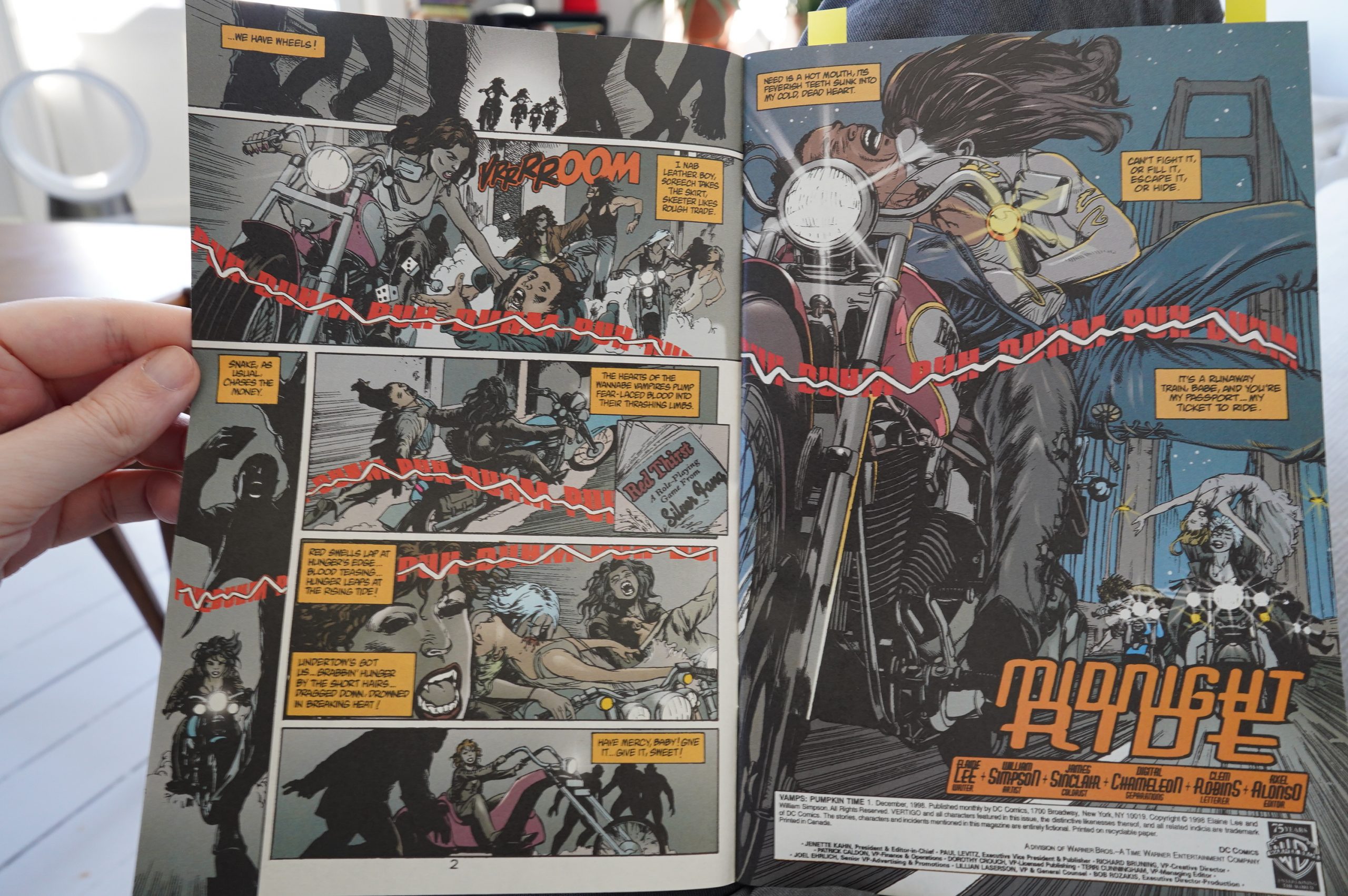 Well.. the first thing that strikes me is that Tatjana Wood is gone. She was the colourist on the second mini and did a fabulous job, not only with a great sense of colour, but also by managing to make the action a lot clearer, because… that’s not really Simpson’s forte. So we’re back to where we were in the first mini, where my eyes are skidding all over the place, and I have to go “oh, that’s Howler or whatsername in that panel… so that’s probably her again in the next panel? or is that Screecher? or Screamer? Or Zack?” 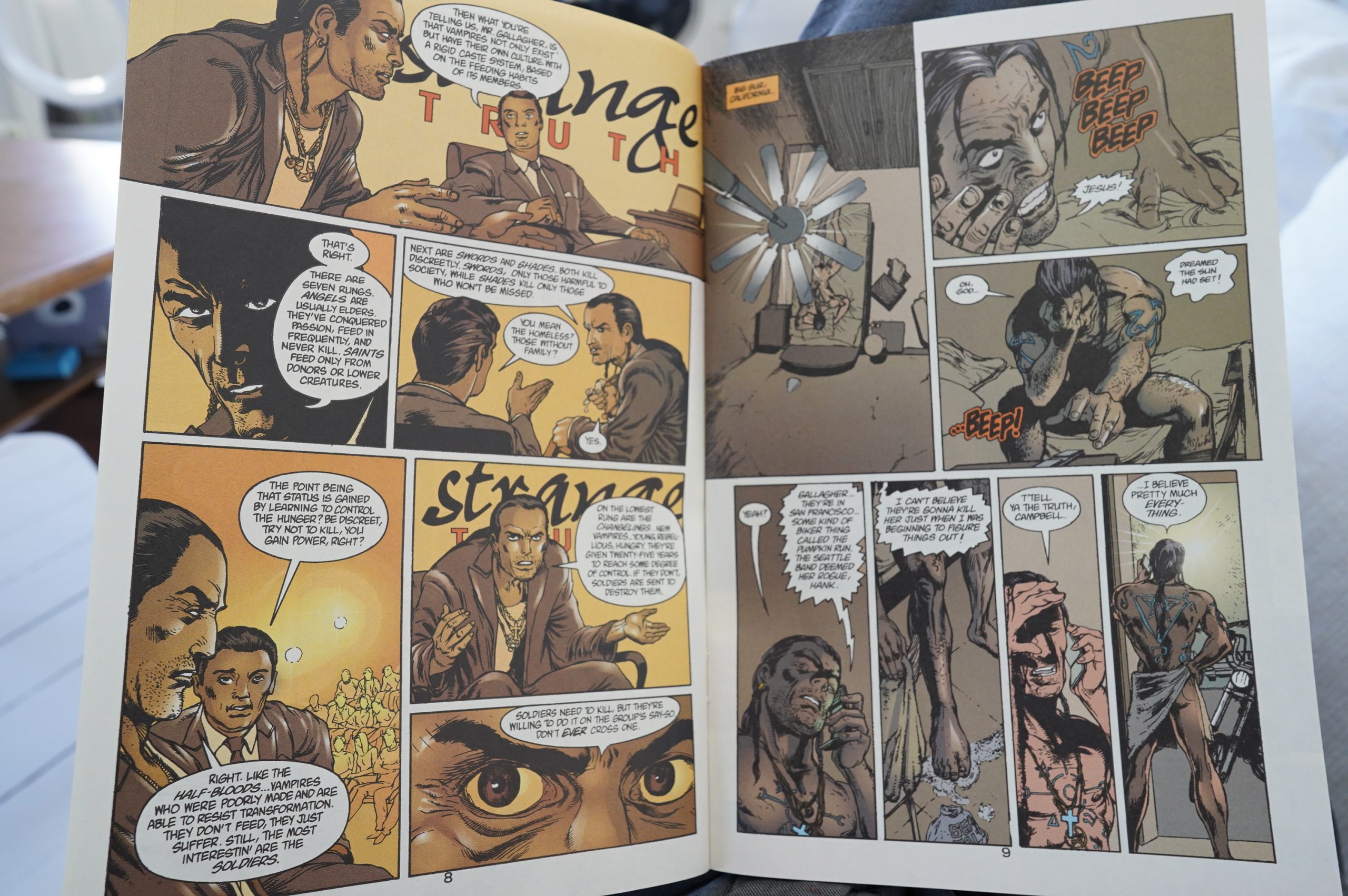 This colourist has an absolute mania for picking a single colour palette per page, and doing the figures and the backgrounds in different shades (whether it makes sense or not), making everything look samey and awkward. Just why are the people on that TV show all wearing brown against a lighter brown/yellow background? No TV shows look like that… it’s just bizarre.

Anyway, plot-wise, Lee is adding a lot to the vampire mythology: In the first two series, there really wasn’t a lot to it; just some vamp gals riding around killing people. But here she adds a whole society of vampires that keep the unruly ones under control… but she doesn’t really do much with that setup except put one of the Vamps in danger, and… 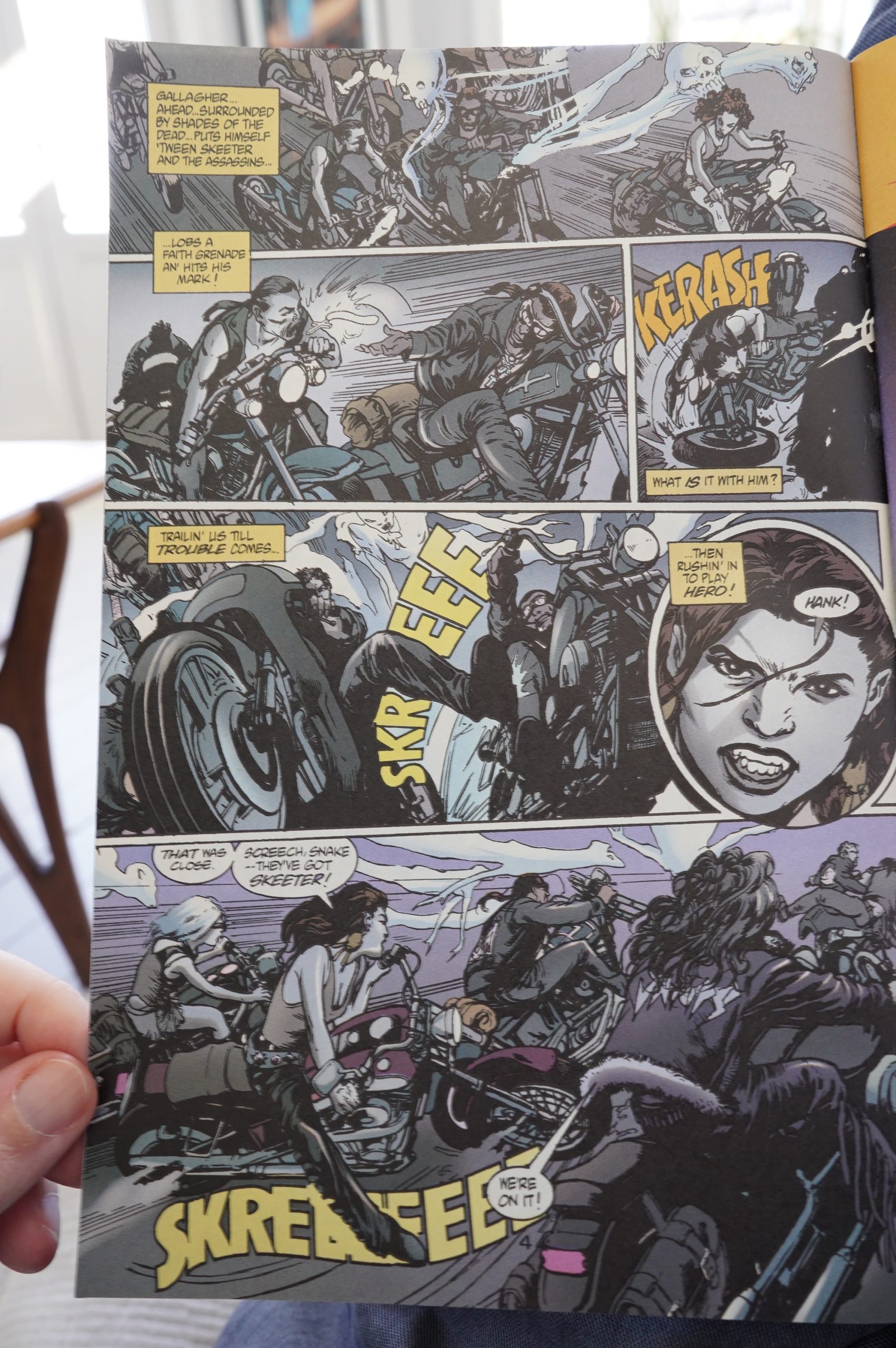 … the rest of the three issues is basically one long fight scene.

And for some reason, one of the Vamps has now become an omniscient narrator, talking about things it’s difficult to see how she’d know about. But I do understand the reasoning behind adding a narrator, because otherwise it’d have been pretty difficult to interpret what’s going on on these pages of muddled action. 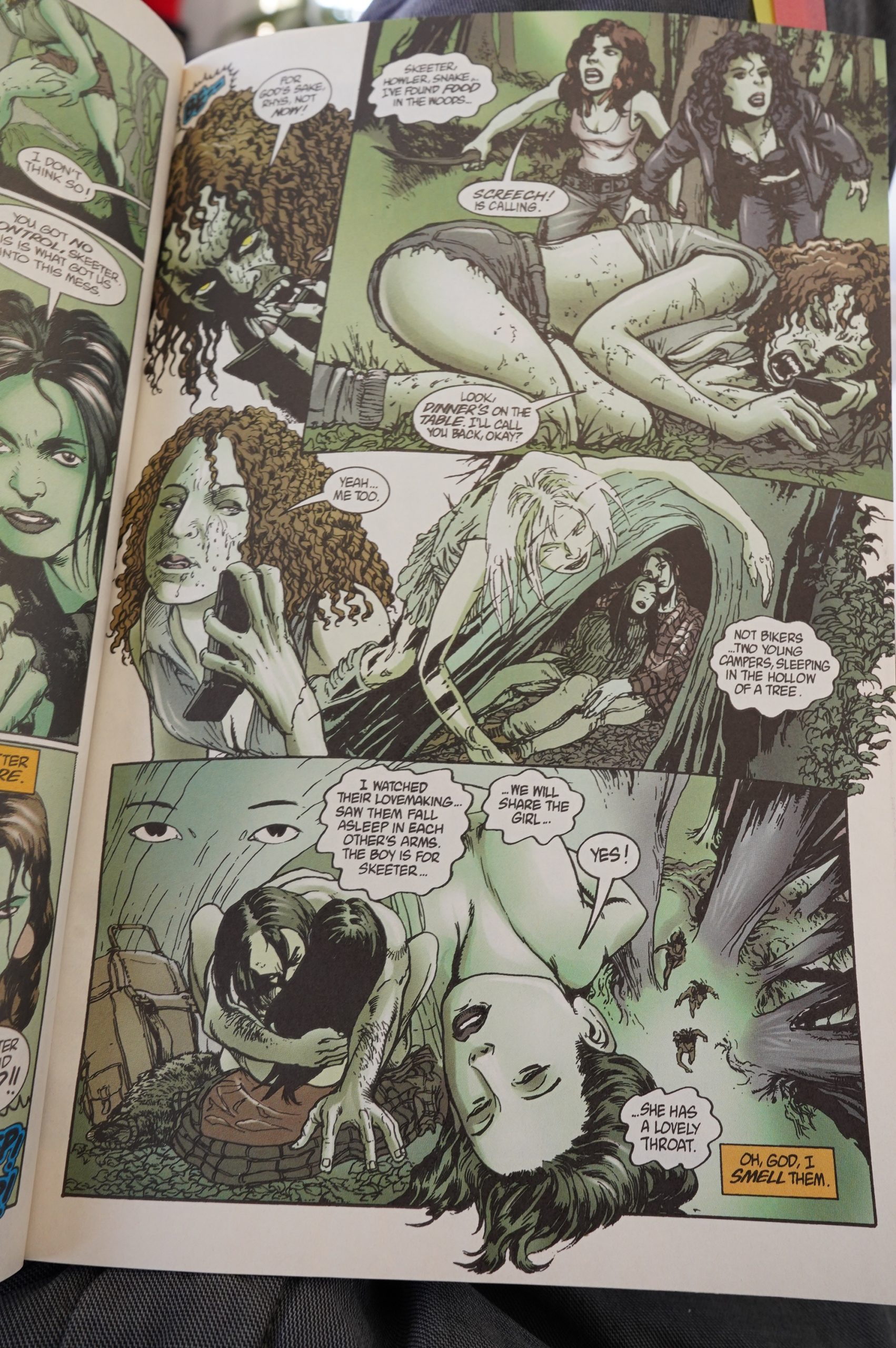 It’s a book from 1999, and most writers were trying to pretend that cell phones didn’t exist, because they close off so many traditional plots: All those running-around-not-being-able-to-find-each-other plots. But Lee, prescient as usual, embraces the technology. 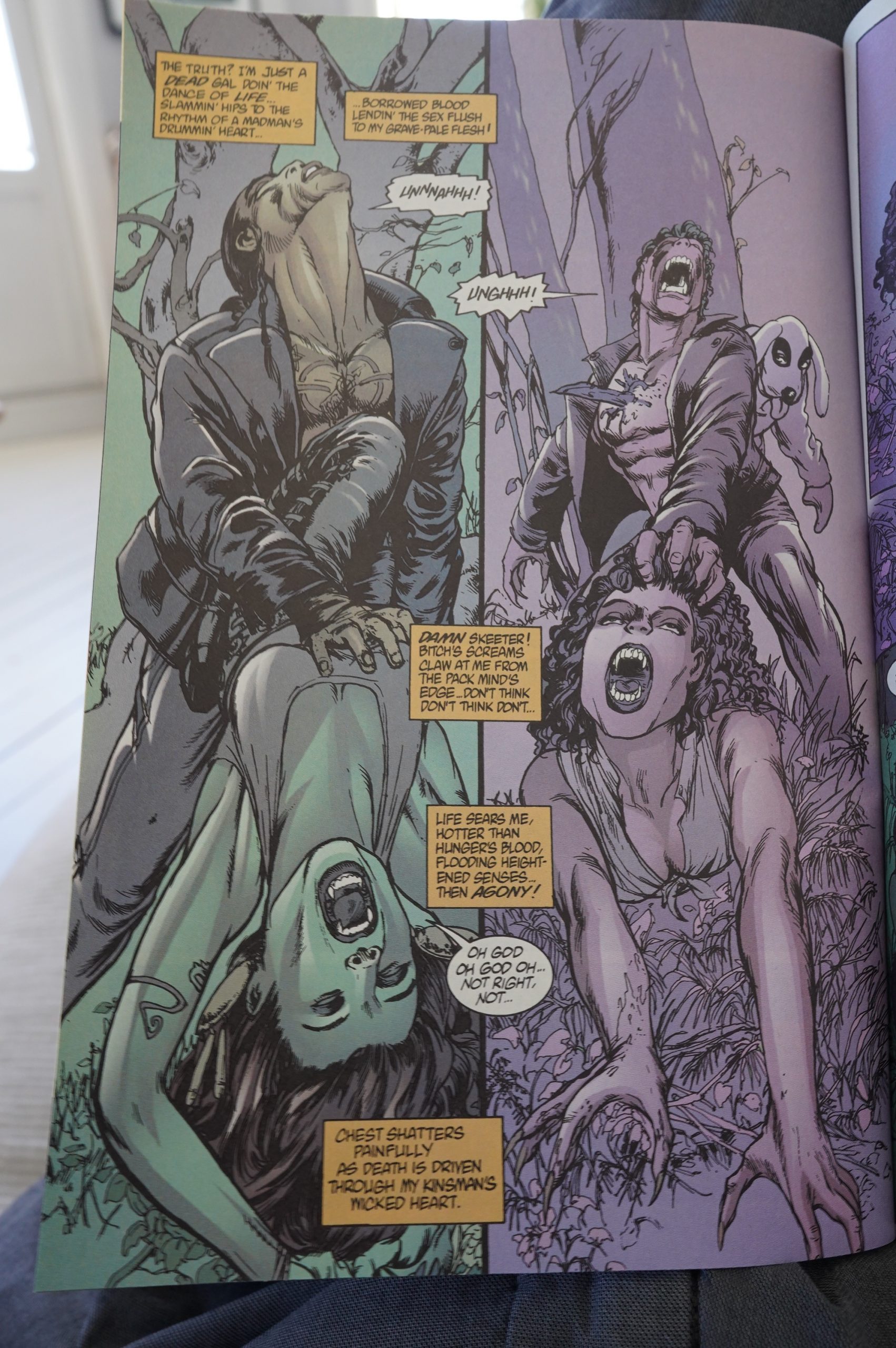 Although… Trying to interpret what’s actually going on in the sex portion of the page will give you a headache, I think. 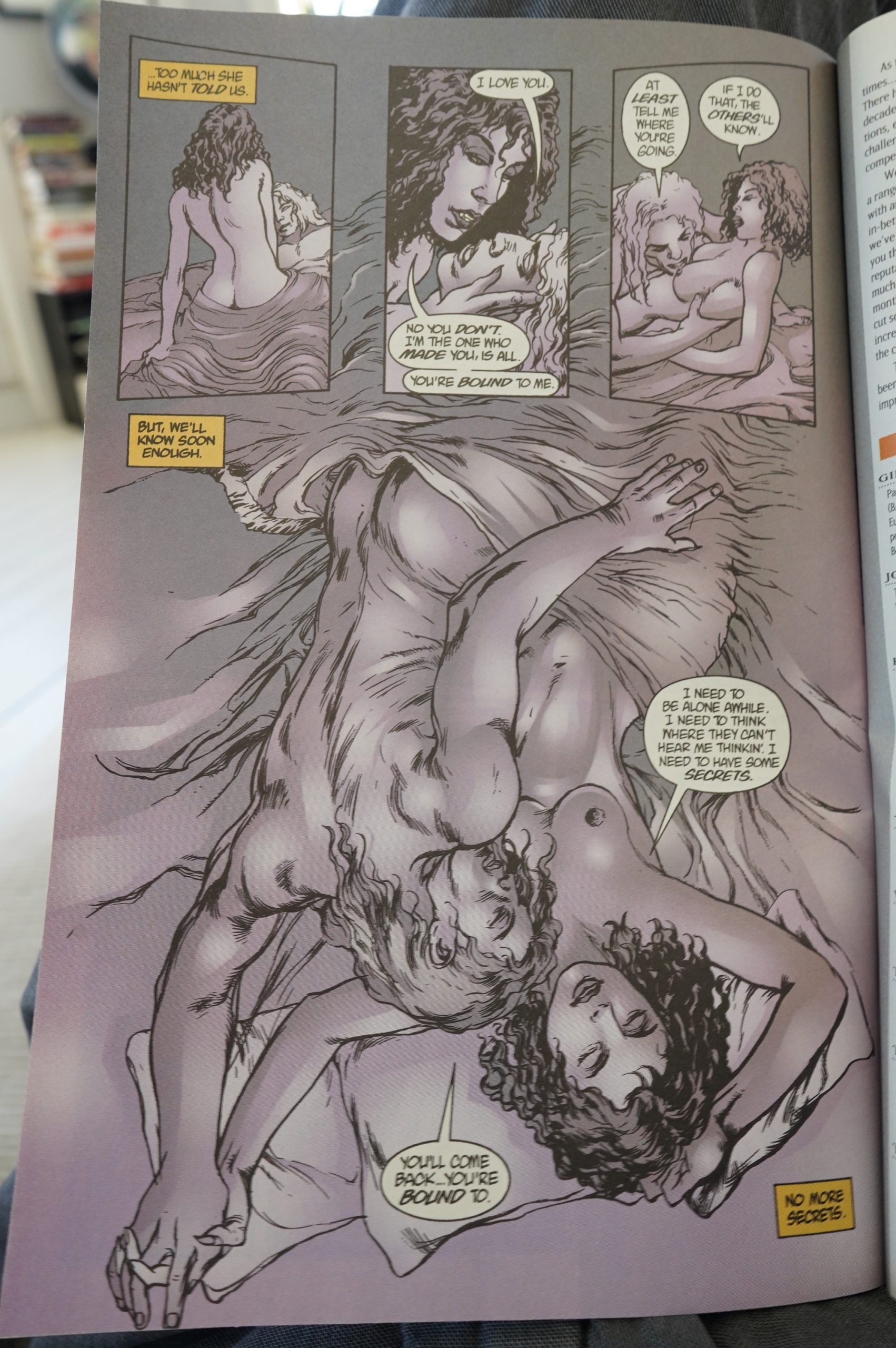 We seem to be promised a continuation, but I think this is the final Vamps appearance? It’s not a very satisfying ending: Everything is left up in the air, really.

This is easily the least inspired of the three mini-series, so I can understand why there wasn’t a followup.

This guy liked it:

The best of the three Vamps miniseries. Lee keeps it simple with this one. A vampire council sends out a group of vampires to kill Skeeter for being too public with her kills. This is also the most action oriented. Most of it is a big chase sequence on Halloween during a biker rally across the Golden Gate Bridge and into the redwood forests. It’s a killer sequence.

The complete Vamps was reprinted recently in a single volume.