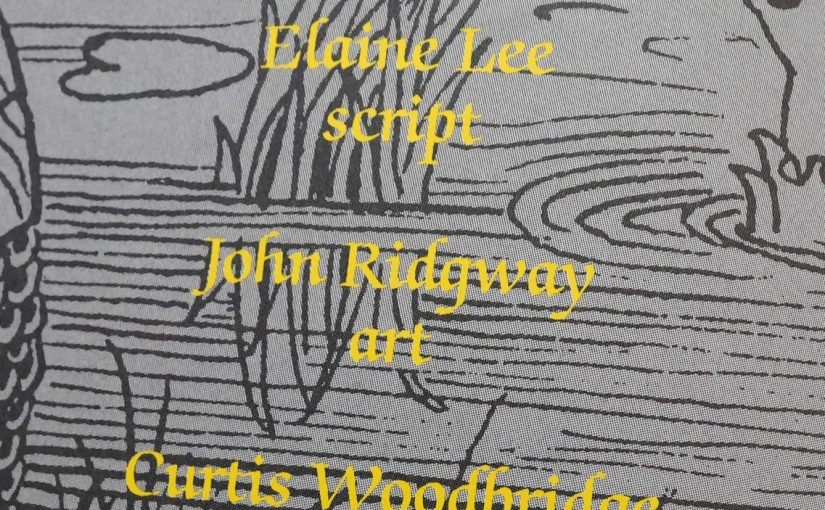 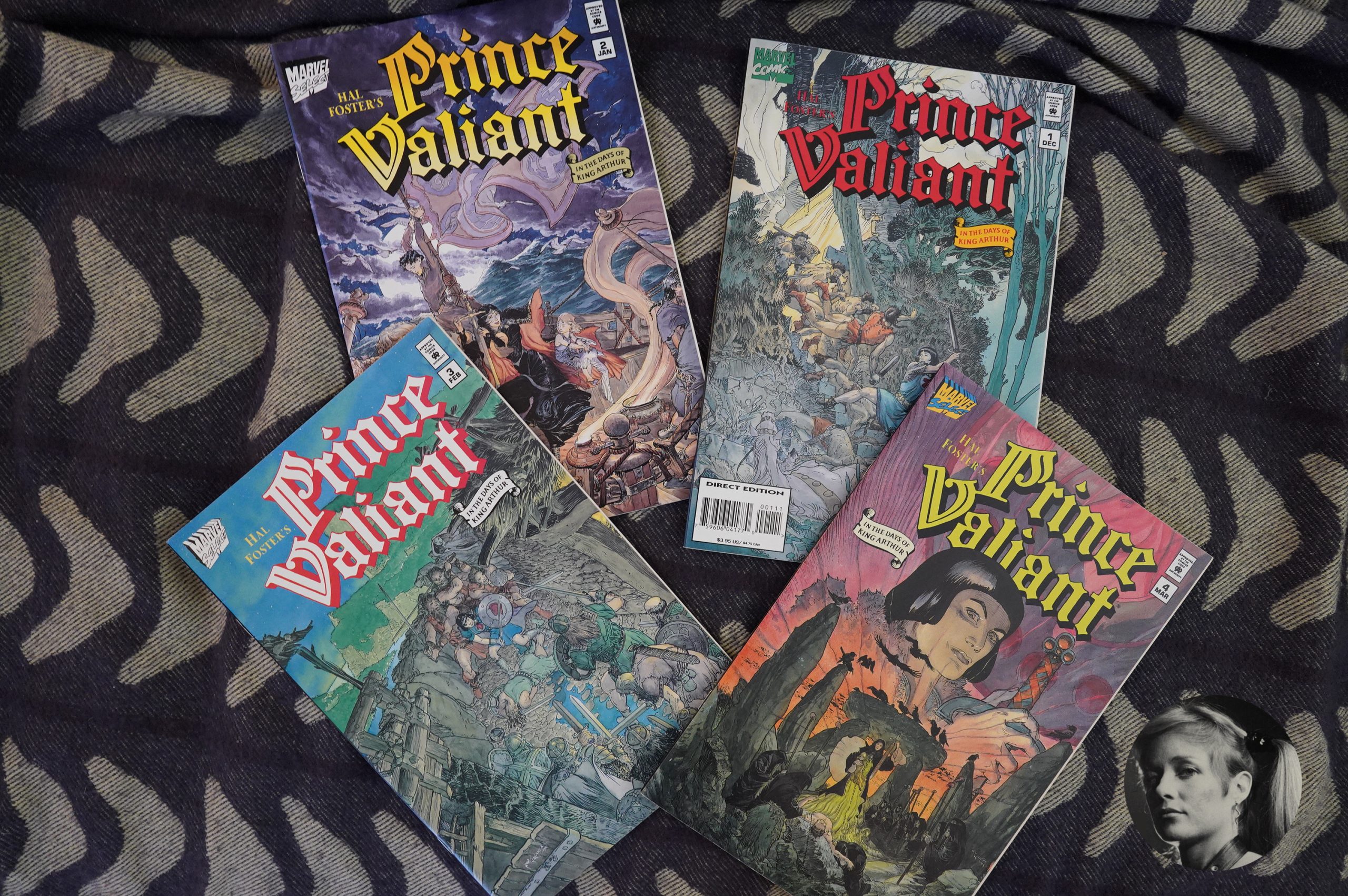 What on Earth is this, then? A… new Prince Valiant? Published by Marvel? 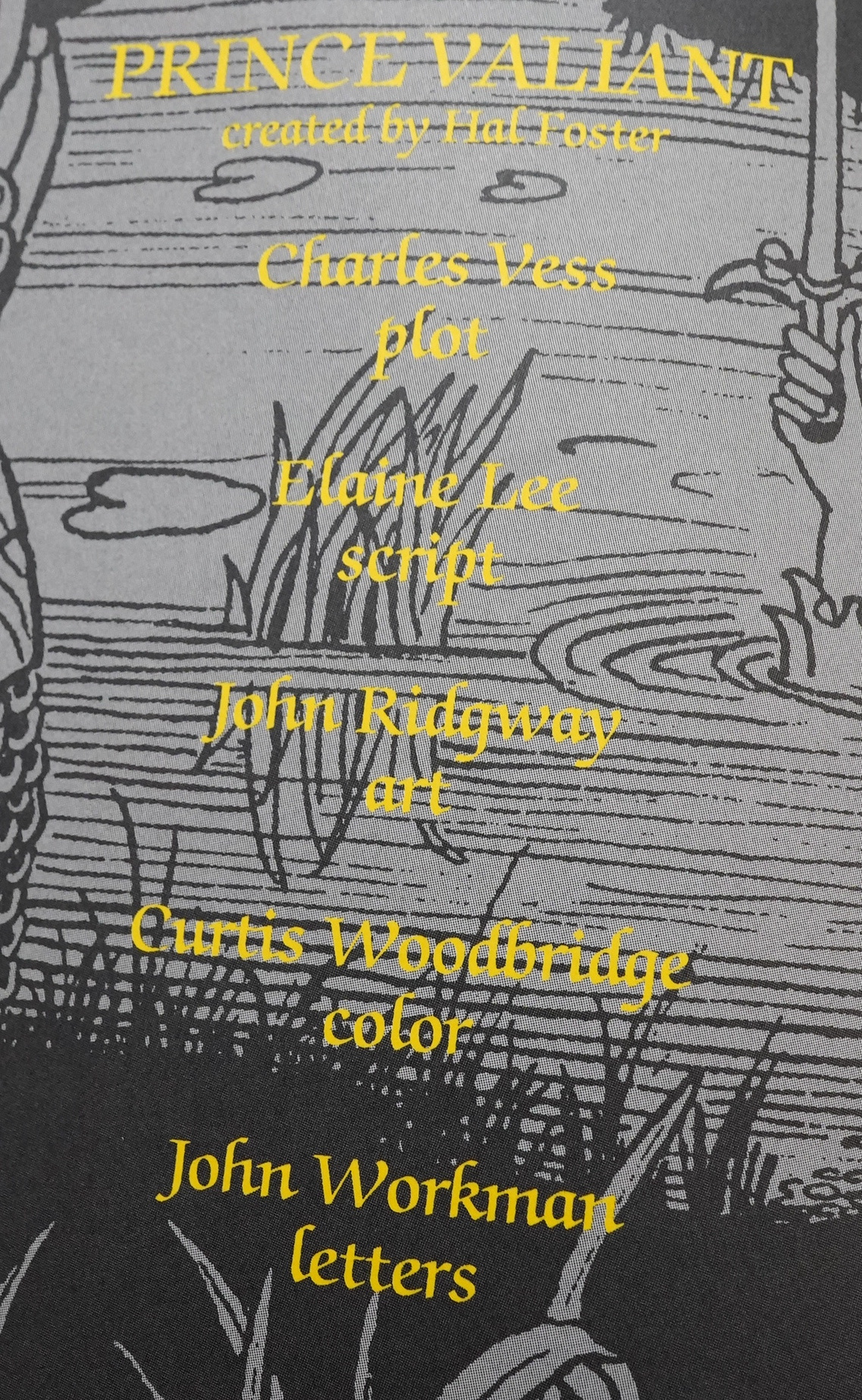 Oh, Charles Vess has done the plot, and Lee is doing the words, I guess?

But what on Earth can this be? It sounds so outlandish that there’d be new Prince Valiant stories published in the 90s… by Marvel… so I wondered whether it had fallen into the public domain, but no — it’s licensed from King’s Features. 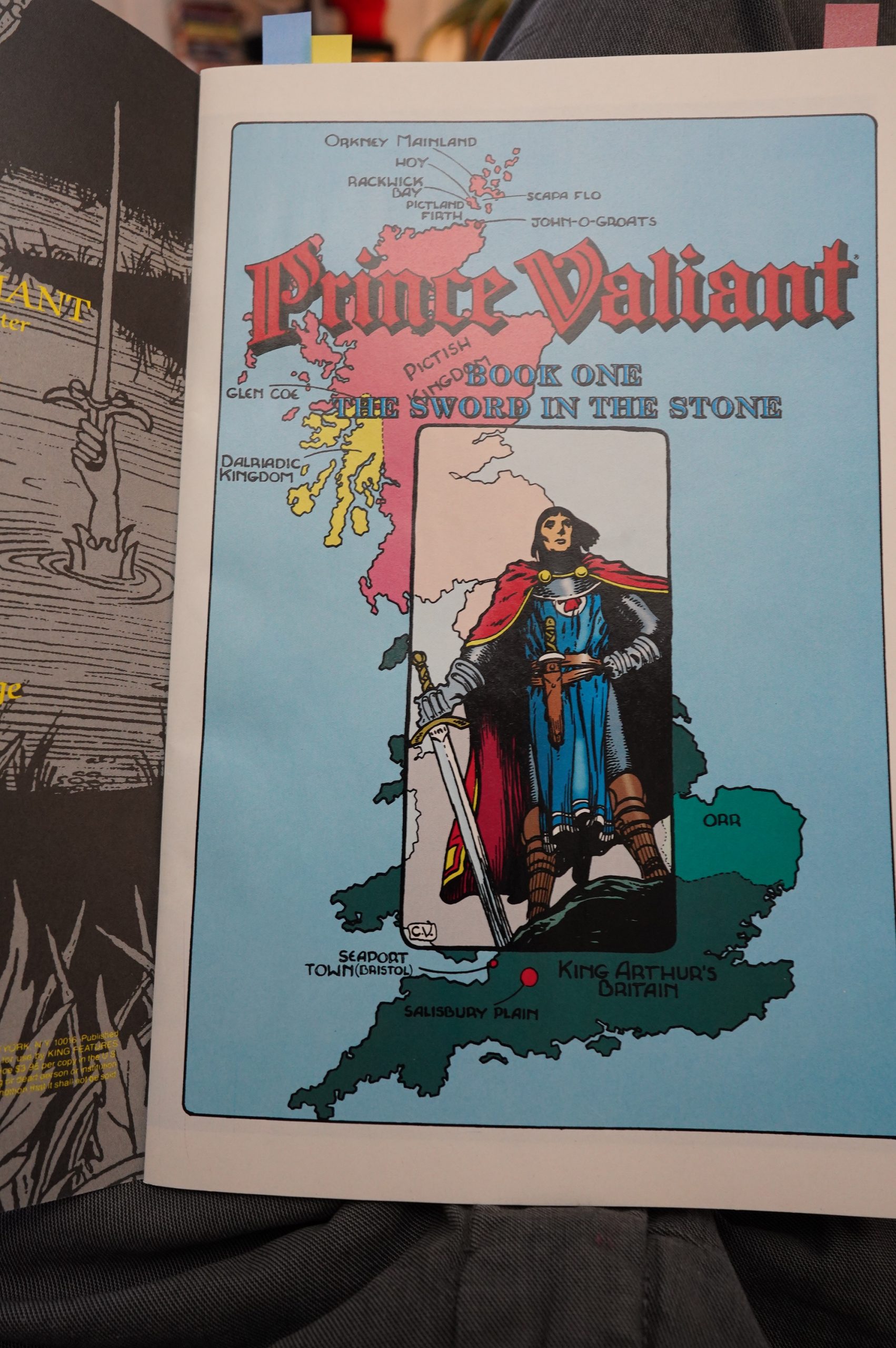 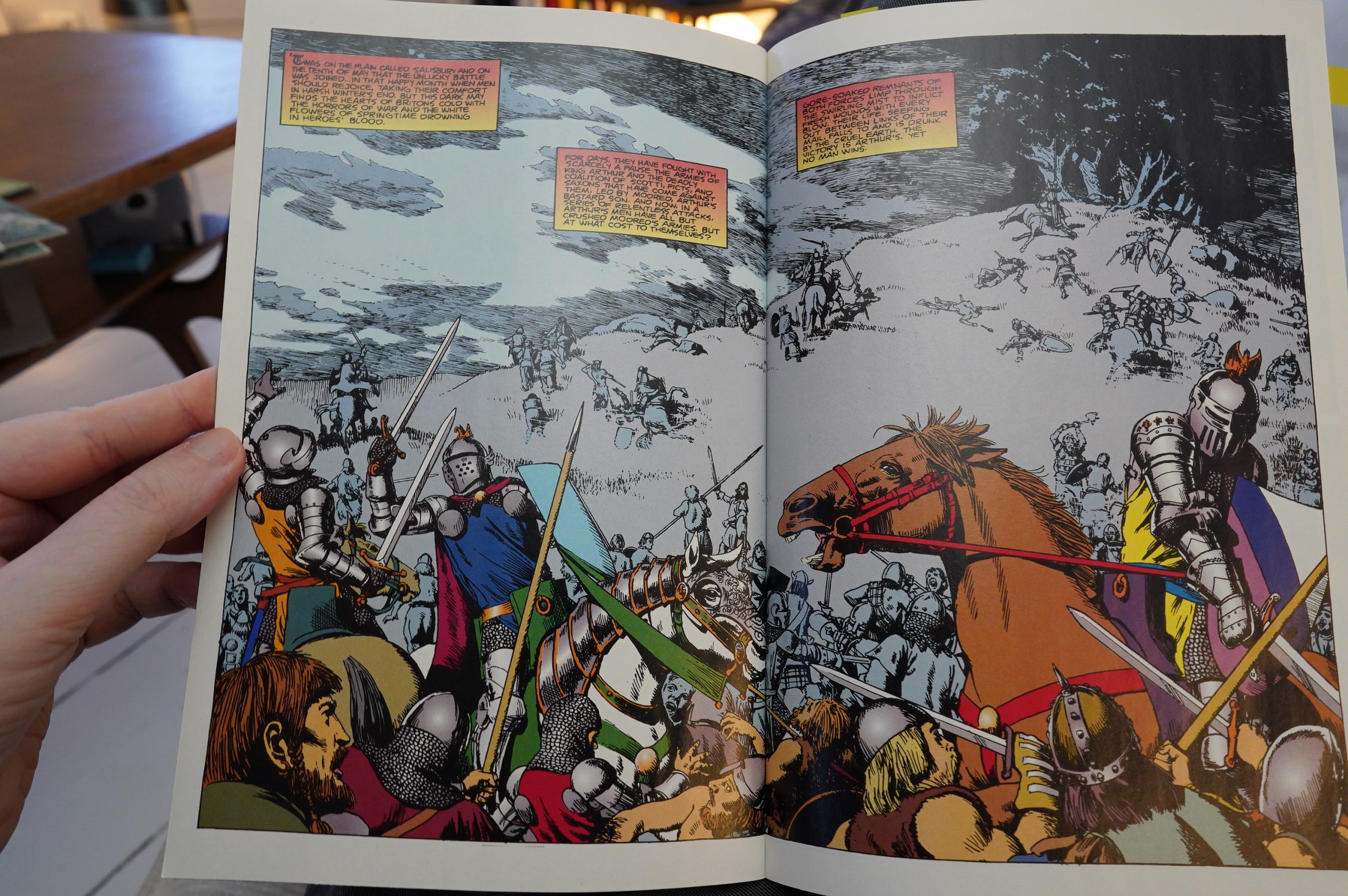 Well, that didn’t really tell us much, other than that they’re using Foster’s storytelling, broadly, with a lot of captions and no speech balloons. 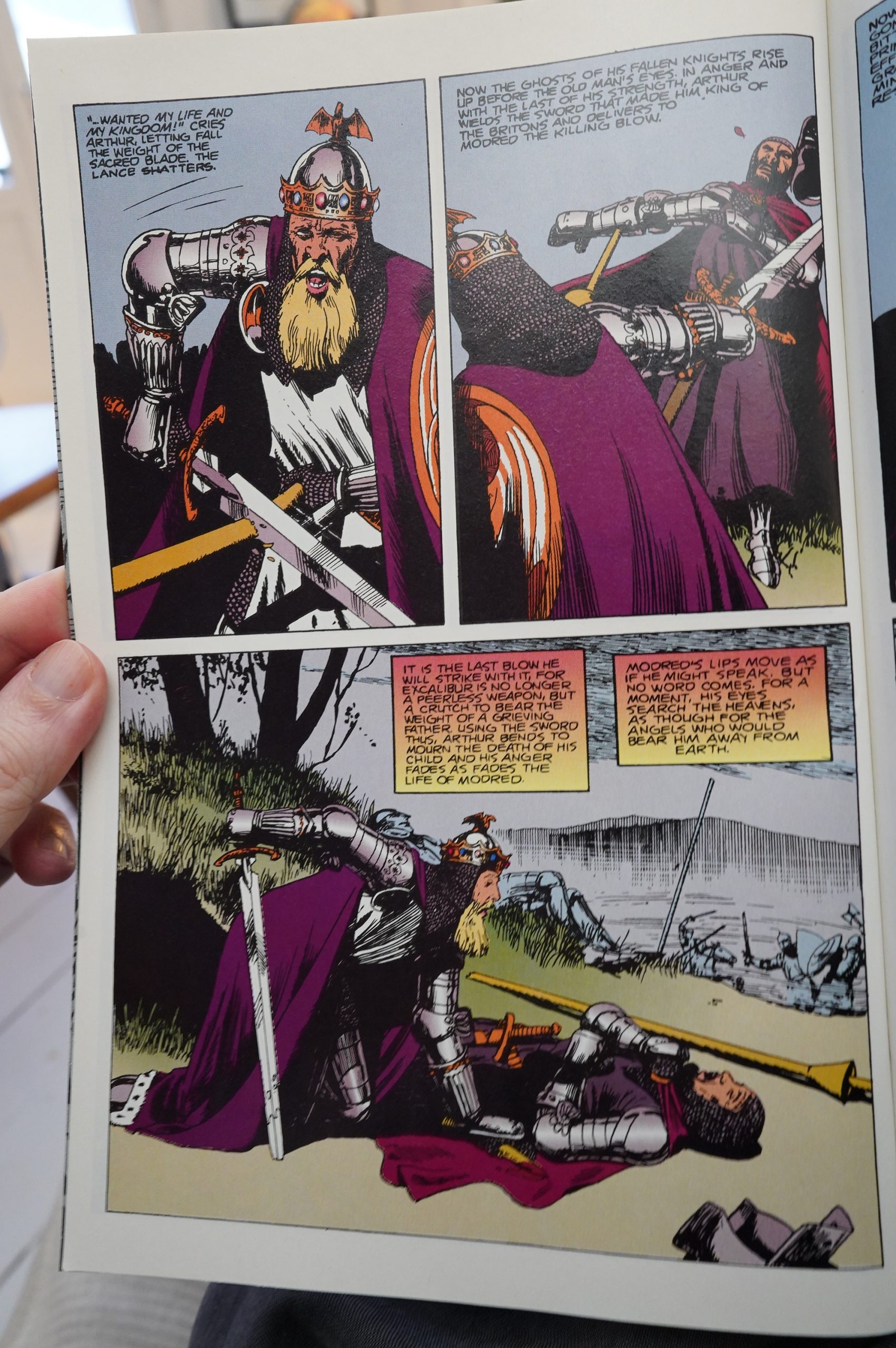 Oh, wow. This is like the Götterdammerung des Camelot or something? I hate to talk about plot, but I kinda have to here: Don’t read this unless you want spoilers.

It starts off with basically everybody from Camelot being killed off, including King Arthur and Gawain and most of the knights of that oval-ish table. This approach does remind me quite a bit of revisionist super-hero books in the 80s: Destroy the status quo and then go off from there. It’s fun! It’s exciting! It raises the stakes to previously unimaginable levels! But once you’ve done that, you can’t really go back to the stuff that people liked about the characters/concept, so you have to reset… and that explains all of what’s been going on at DC Comics since 1985 and is still happening to this day.

Which made me wonder whether this was just a dream sequence intro, or something, because I couldn’t imagine that King’s Features would let Marvel do this to their characters. 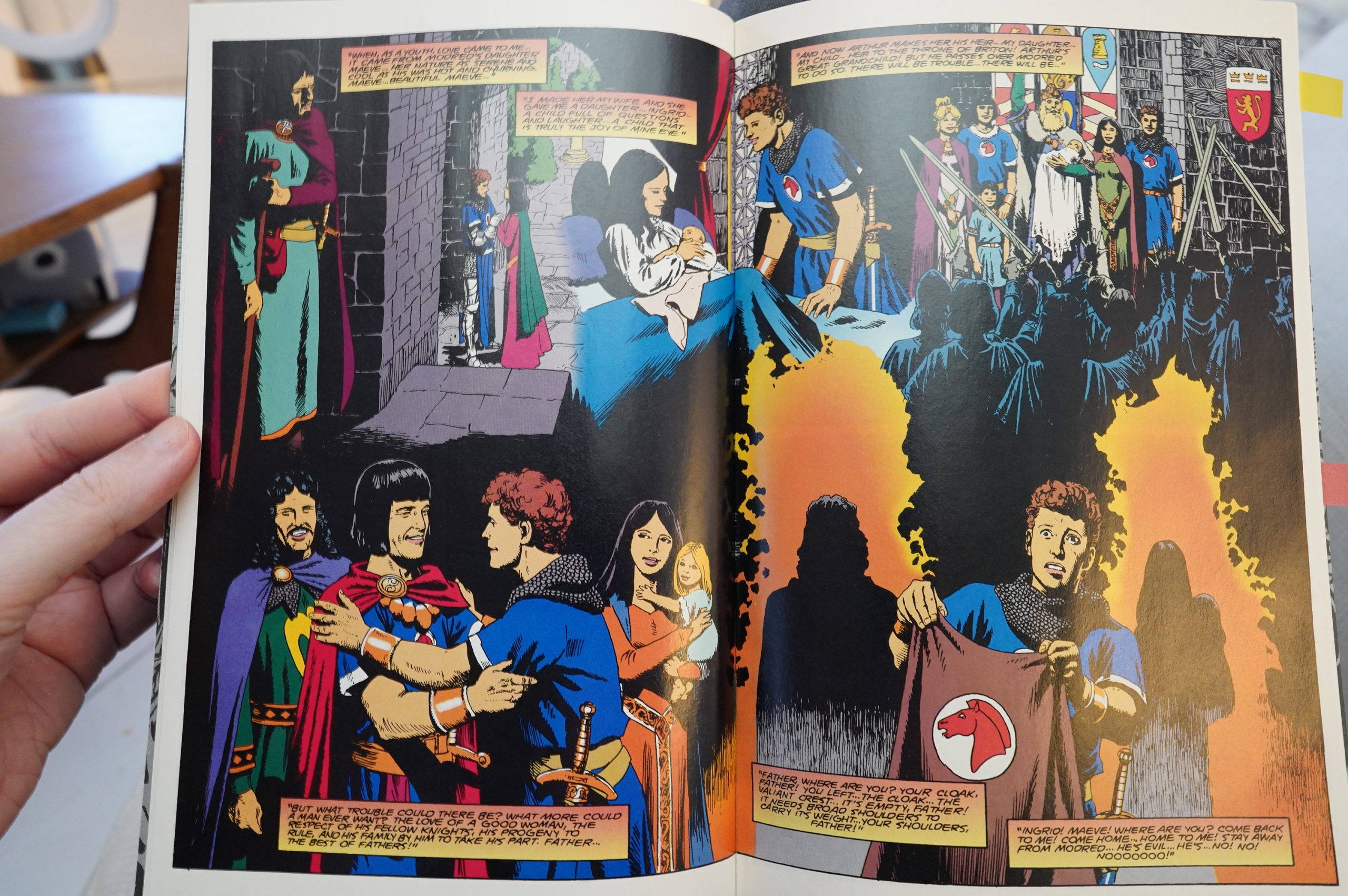 But no: It’s not a dream, not an imaginary tale, not an alternate dimension: Arthur is dead, Valiant’s son and granddaughter is kidnapped, and England is in ruins.

OK, let me just touch upon my relationship to Hal Foster’s pap pap series a bit: I grew up reading the various collections, badly printed as they were, and I was absolutely captivated as a child. Absolutely totally. But I only had the first, say, dozen or so? years, so I never really got to see Arn go off on adventures of his own and all that stuff. When Fantagraphics started their Prince Valiant reprinting programme, er, a decade ago? I got back into it, and I’ve been reading the volumes as they come out… but I stopped when Foster stopped doing the artwork. Not because that new guy (Murphy?) was horrible or anything, but the stories had become repetetive and dull over the last decade, and that was a good jumping-off point. But my point to all this is that I don’t know how far into the “future” of the newspaper strip this takes place. I think… at least a couple of decades from where I left off? And I don’t know stuff like whether Aleta still lives, or how many children they have and… this series doesn’t go into any of that, and I think that’s such a good idea. 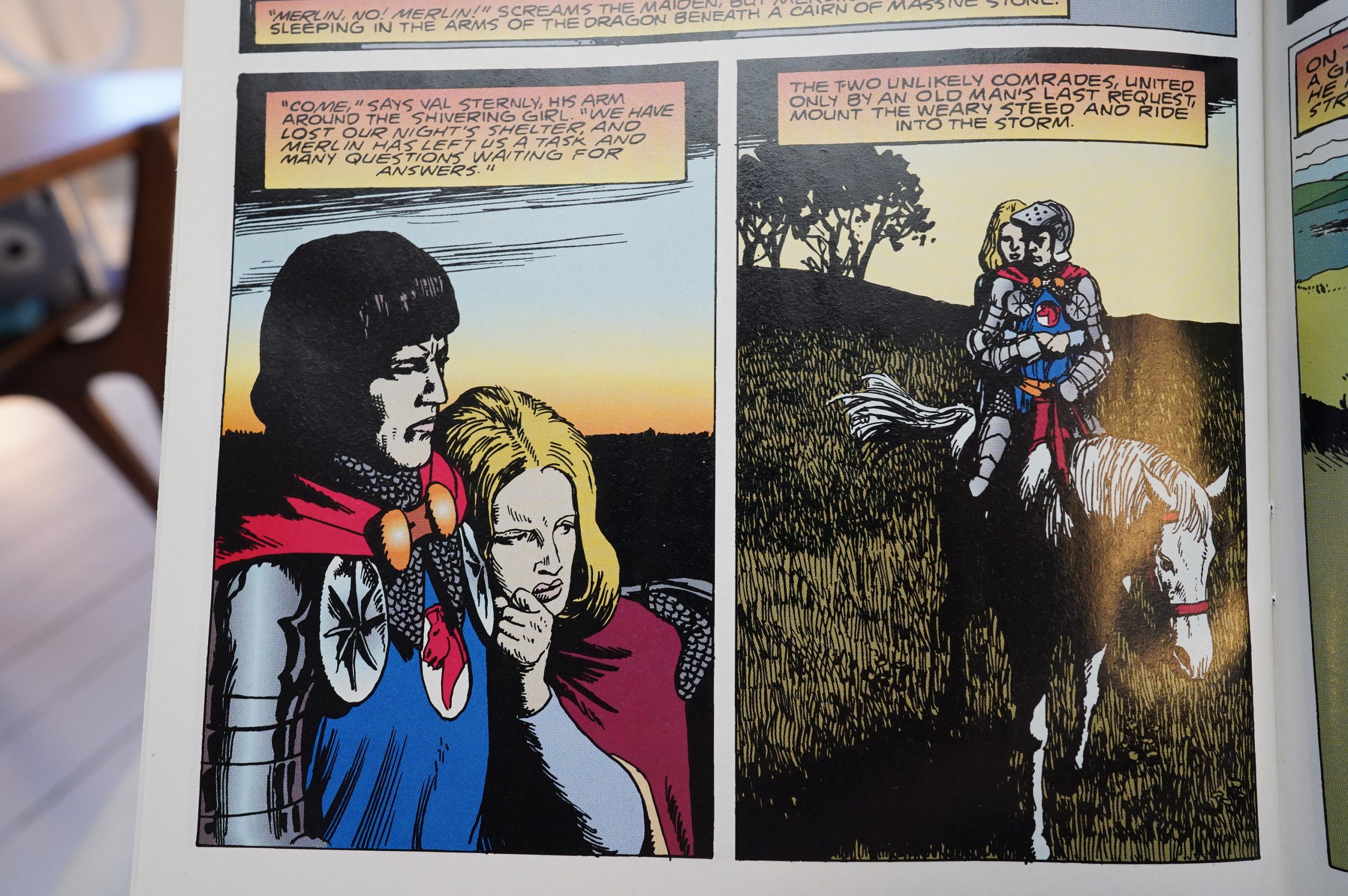 The story starts with that cataclysm, and then Valiant gets his quest, and then we’re off for the rest of the 200 pages this series lasts. No contextualising, no text pages of backstory, no “as you remember, Boltharsson is the son of Bolthar and a Native-American woman”. I love it! It’s full on! It’s Hal Foster storytelling!

Not that he didn’t do flashbacks, but he was fond of keeping things moving (at least in his heyday).

What isn’t quite Foster is… and I’m ashamed to even say this… is Ridgway’s artwork. It’s not Hal Foster. But what is? 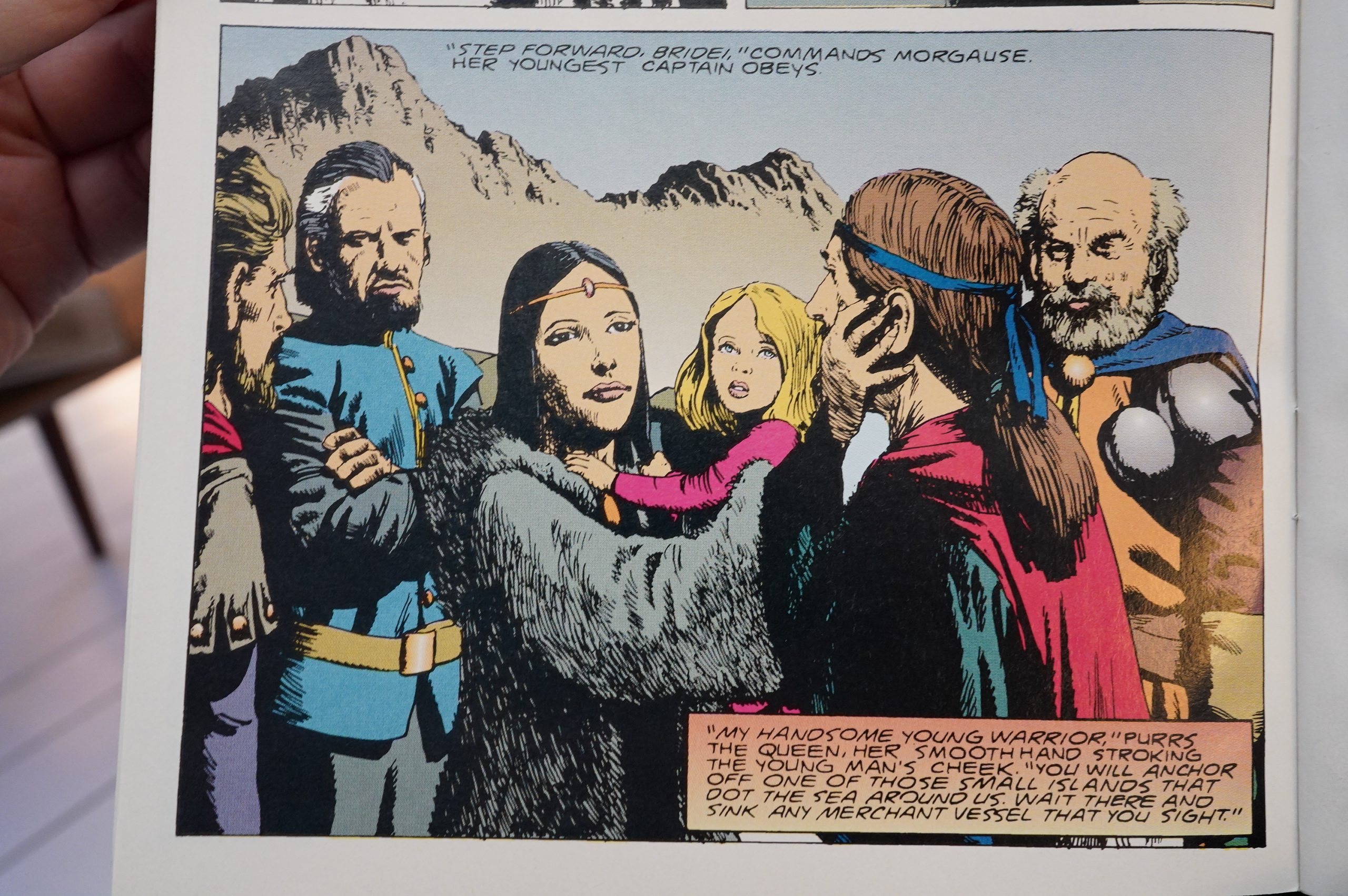 The artwork is wildly variable. Some panels look great, and in other panels, people look like random collection of body parts, with head sizes having little relation to body sizes or perspective, and with arms that don’t quite seem to connect with the bodies. The linework also seems quite coarse, as if it’s drawn the same size it’s printed, almost. 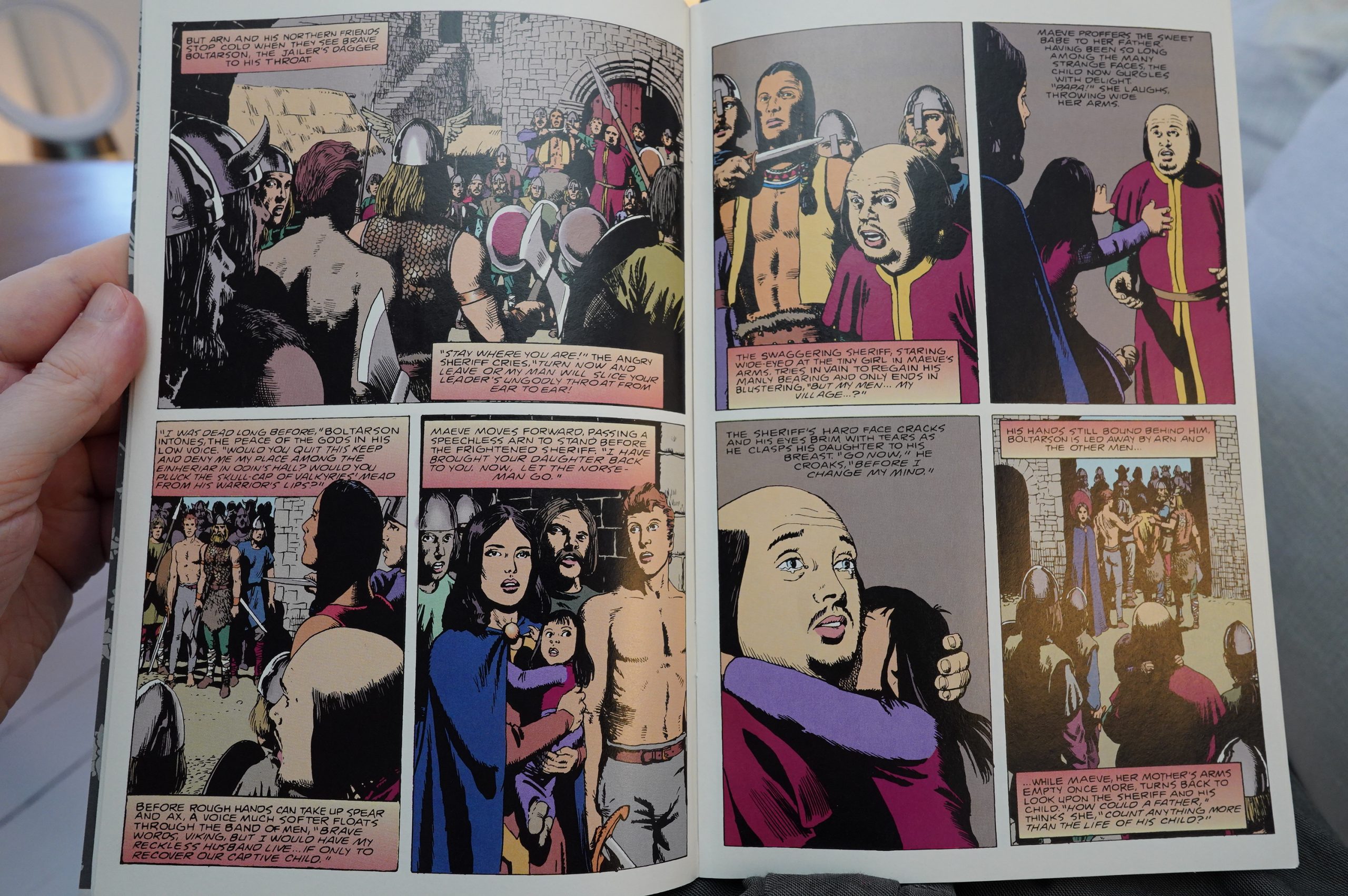 But this is a blog article series about Elaine Lee, right? Right. So what about the text?

It’s pitch perfect Hal Foster. It’s more Hal Foster than Hal Foster himself was. It’s just the perfect amount of text, making this feel like a speedy, propulsive read, while in reality it took me all night to read this. I wasn’t bored a millisecond. The text is touching when it should be, witty when needs be, and fierce as a Prince Valiant text should be. 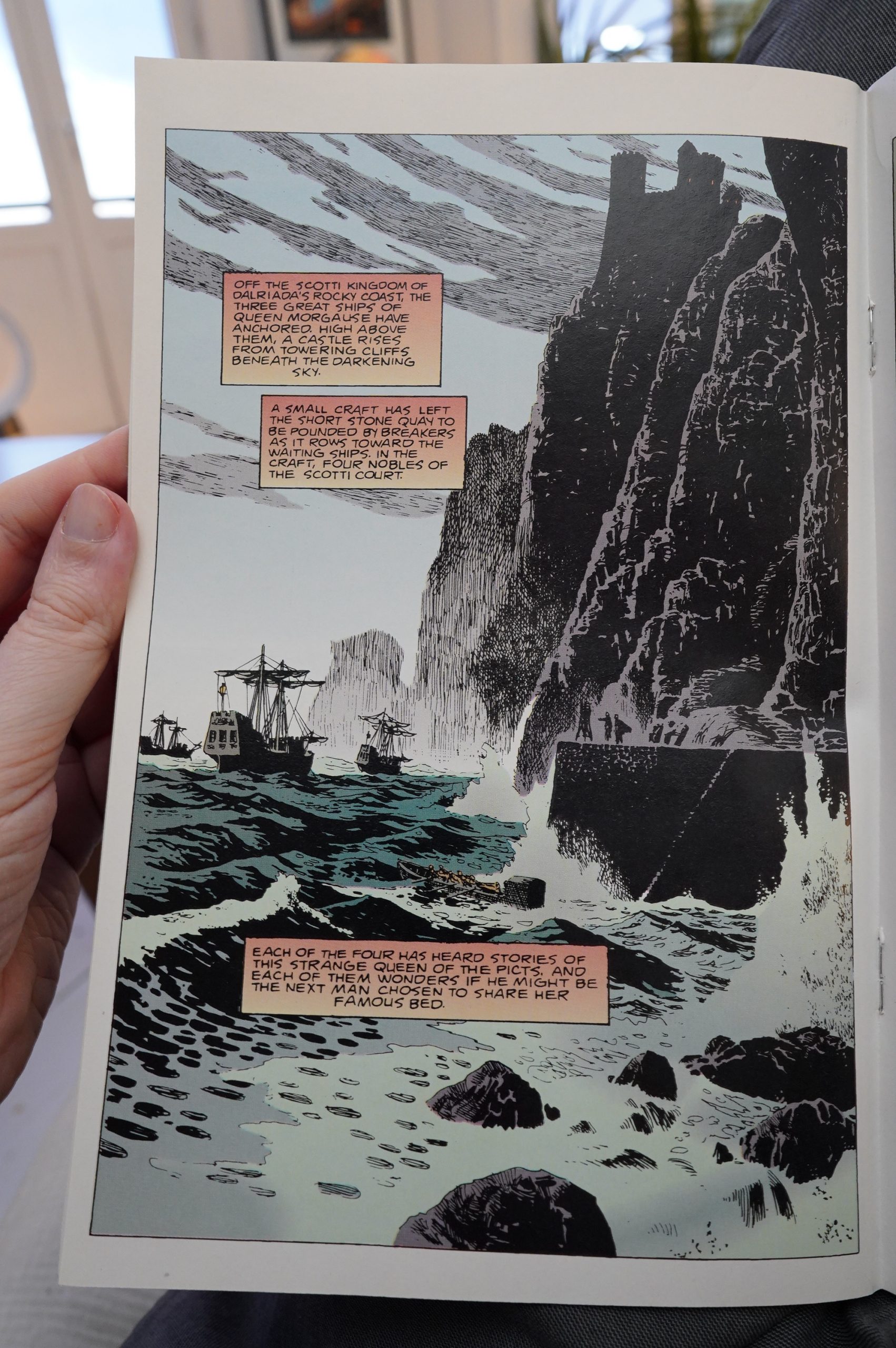 Ridgway does a lot better on the moody panoramas than when doing detailed faces. 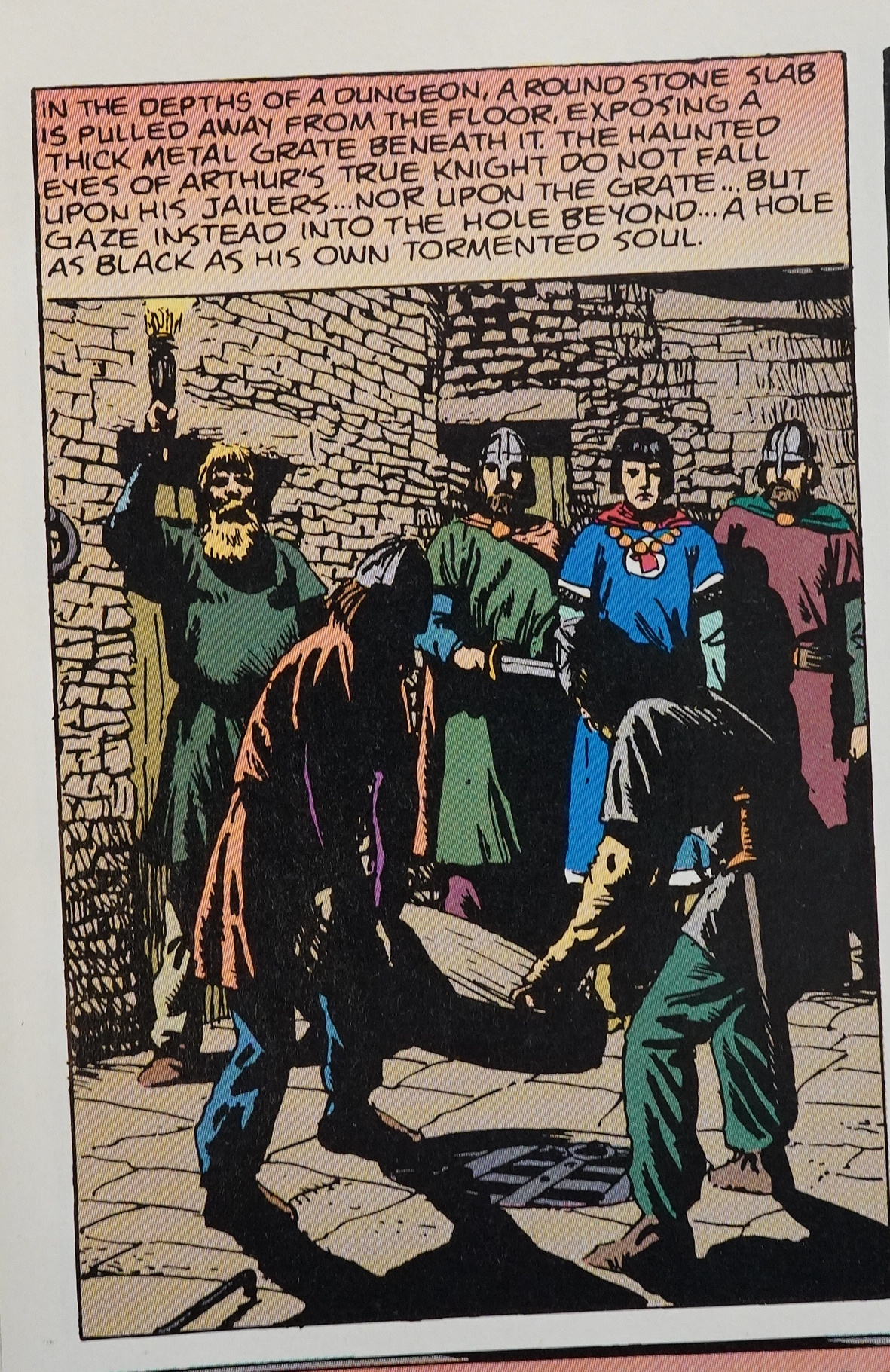 Hm… Prince Valiant has a black, tormented soul? OK, I don’t think Foster would have said that, perhaps… 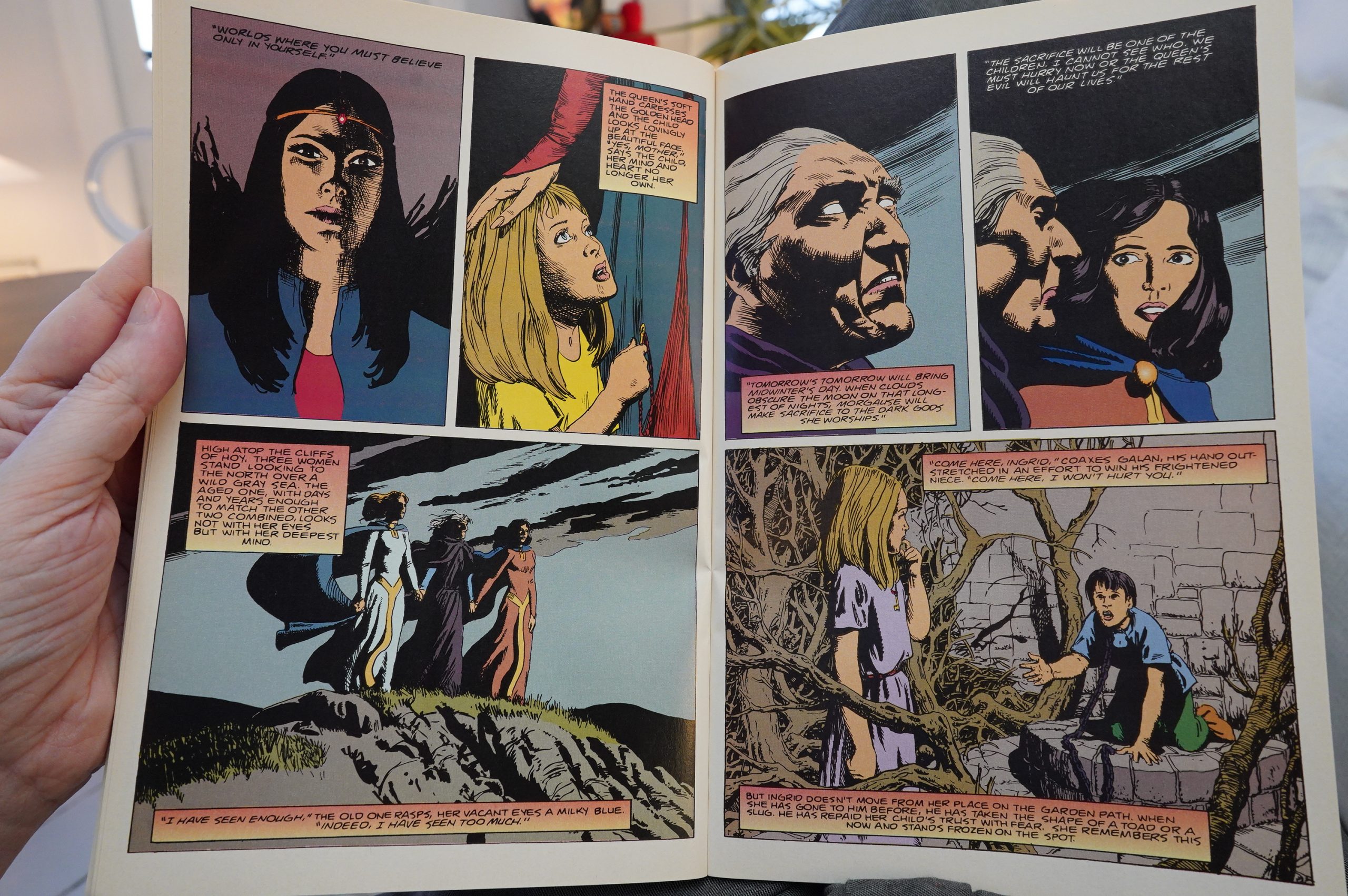 So is this a modern take on Prince Valiant? Hm… I don’t quite know… there’s a lot of female characters here, and they are not at all incidental to the storyline (which I won’t go into further details about, but the storyline is really exciting!), but are integral and important to the outcome. But then again, that’s something Foster used to do, too… perhaps not with as many female characters at once, though. 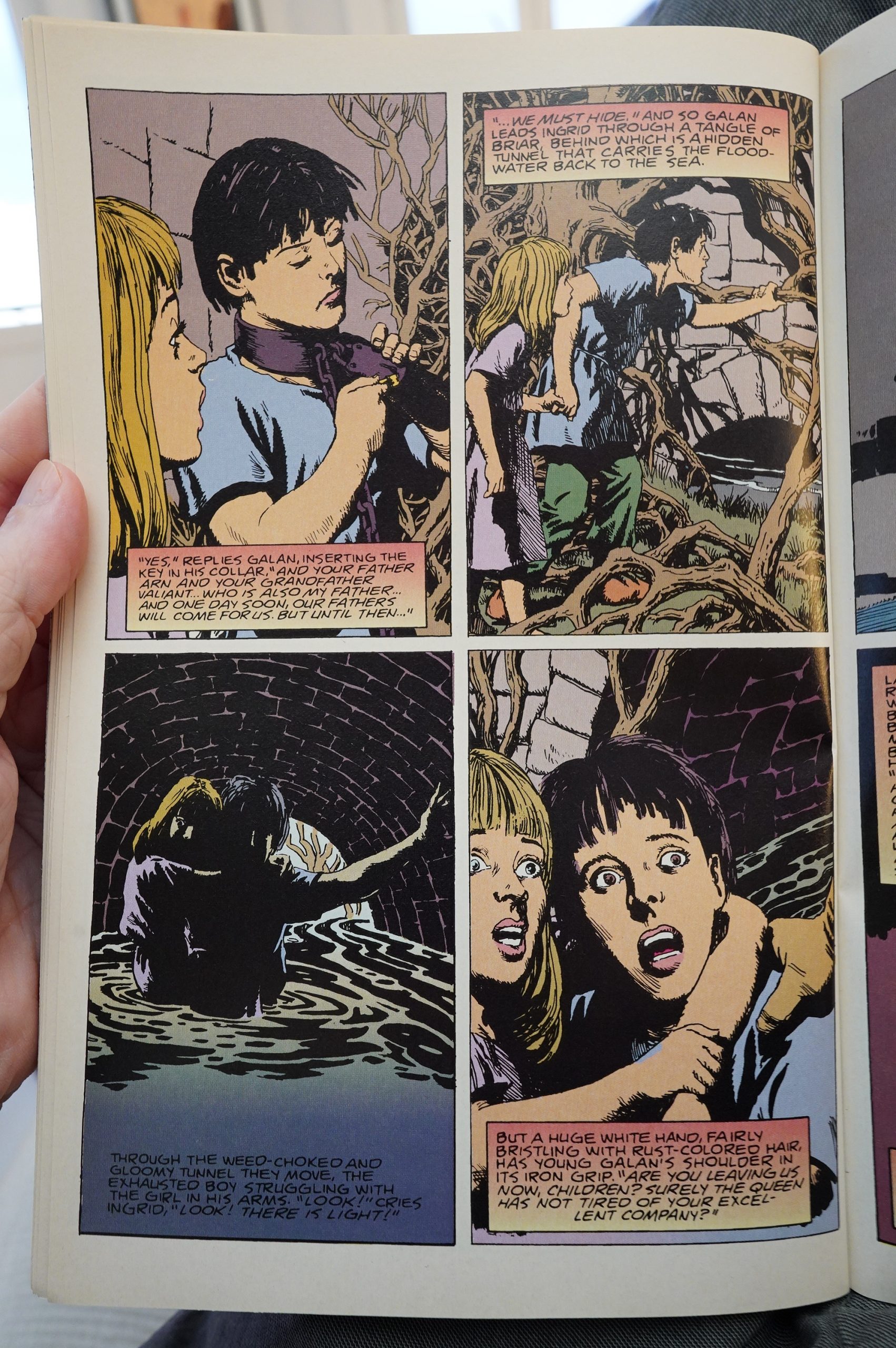 I’m just amazed at the pacing of this book. They cram so much in here without it feeling overstuffed at all, and there’s no boring padding. Look at the above page: The two children make their escape and are then recaptured… in four panels! Without the captions, this would have taken no time to read, so it would have felt rushed and strange. But read as is, it feels like a little satisfying mini-adventure, and it’s exciting! I’m all in!

And I have to grudgingly admit that Ridgway is a good storyteller, too, because look at the smug expression on the face of the boy in the first panel, and the sheer horror in the final panel. OK, the features of those faces in the latter panel look like they’re on a random walk around the faces, but still!

So… I had no expectations going in here, but I was thoroughly entertained this evening. I was thrilled, I smiled, I almost cried… what more can you ask for?

Apparently this series has never been reprinted? SHAME! SHAME! 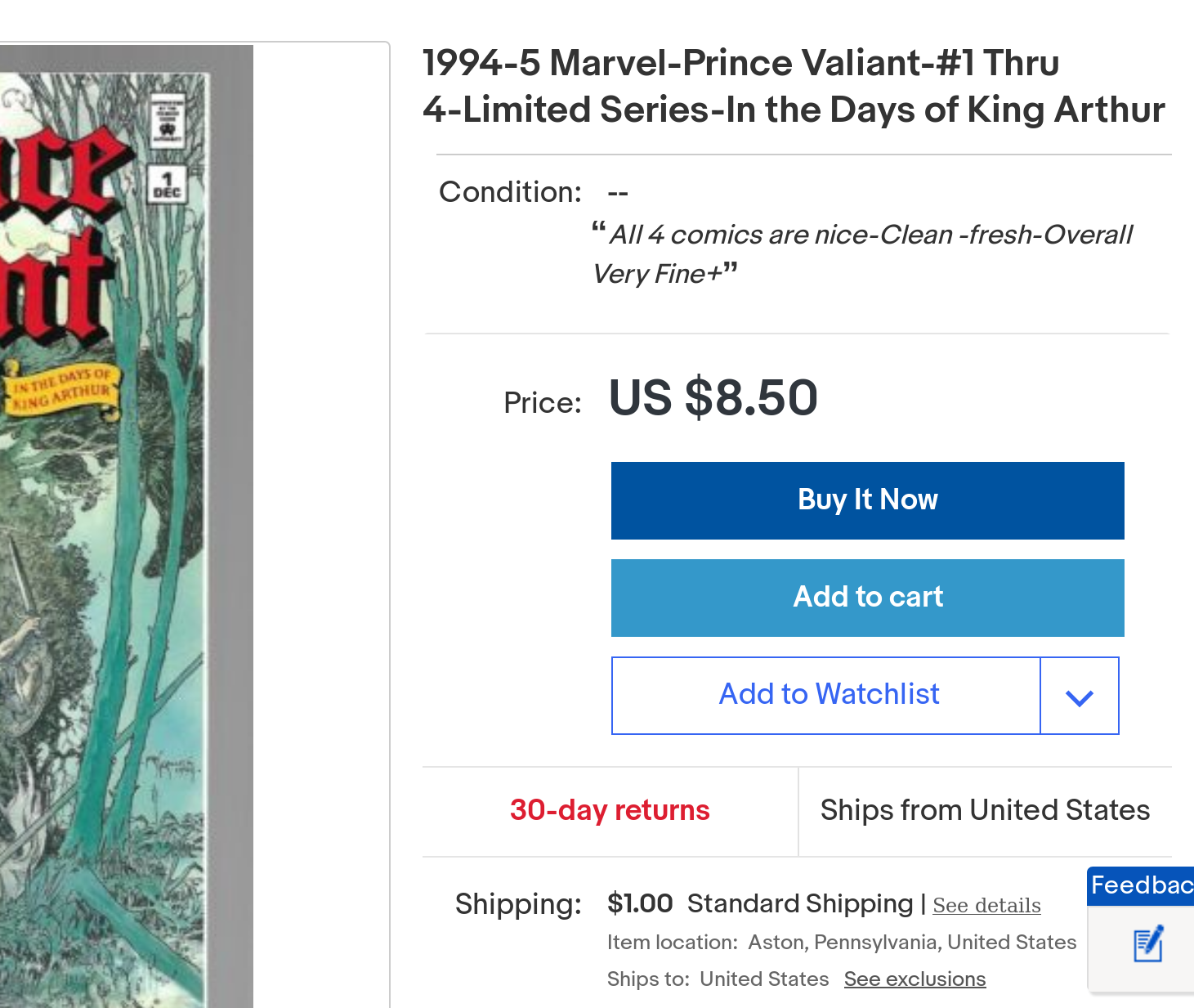 But you can pick it up cheaply from Ebay, which I guess means that I was the only person who liked it.

What gradually emerges is an absorbing, atmospheric saga that does have an epic quest feel to it, as if you’ve just finished a work of literature — not surprising as it clocks in at almosst 200 pages. But then, I’ve read similar lengthy comicbook sagas that don’t generate the same sense of sweep to them. There are machinations, and shifting alliances; the characters find themselves taking detours in their quest, but detours that add to the overall story, not that seem like extraneous sidebars. This makes for a work that doesn’t just trod along in a predictable fashion.

Actually… that’s the only one I could find.

I’d love to know how this came to be, and why Marvel published it, but I’m coming up with zilch.