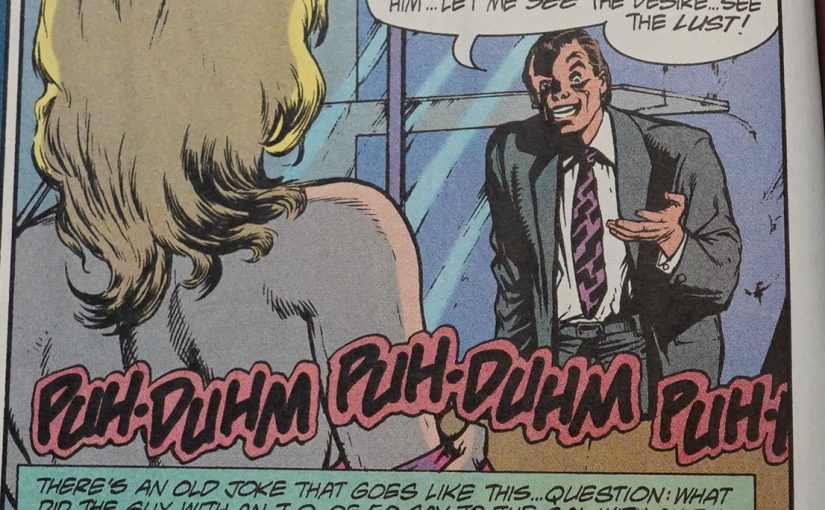 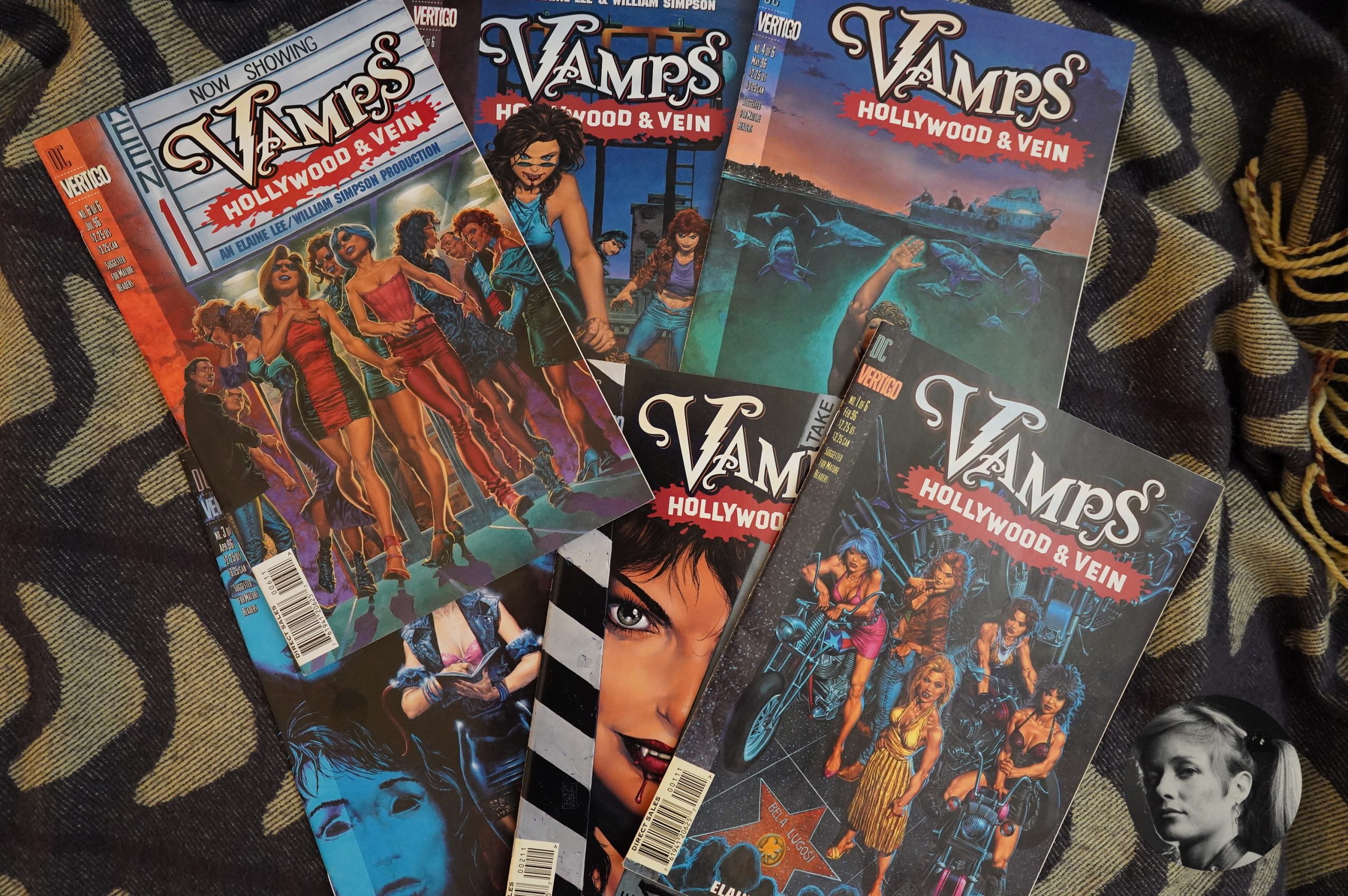 Vamps: Hollywood and Vein #1-6 by Elaine Lee, William Simpson and others, published by DC/Vertigo.

This is the second Vamps mini-series, and I wrote about the previous one the other day. 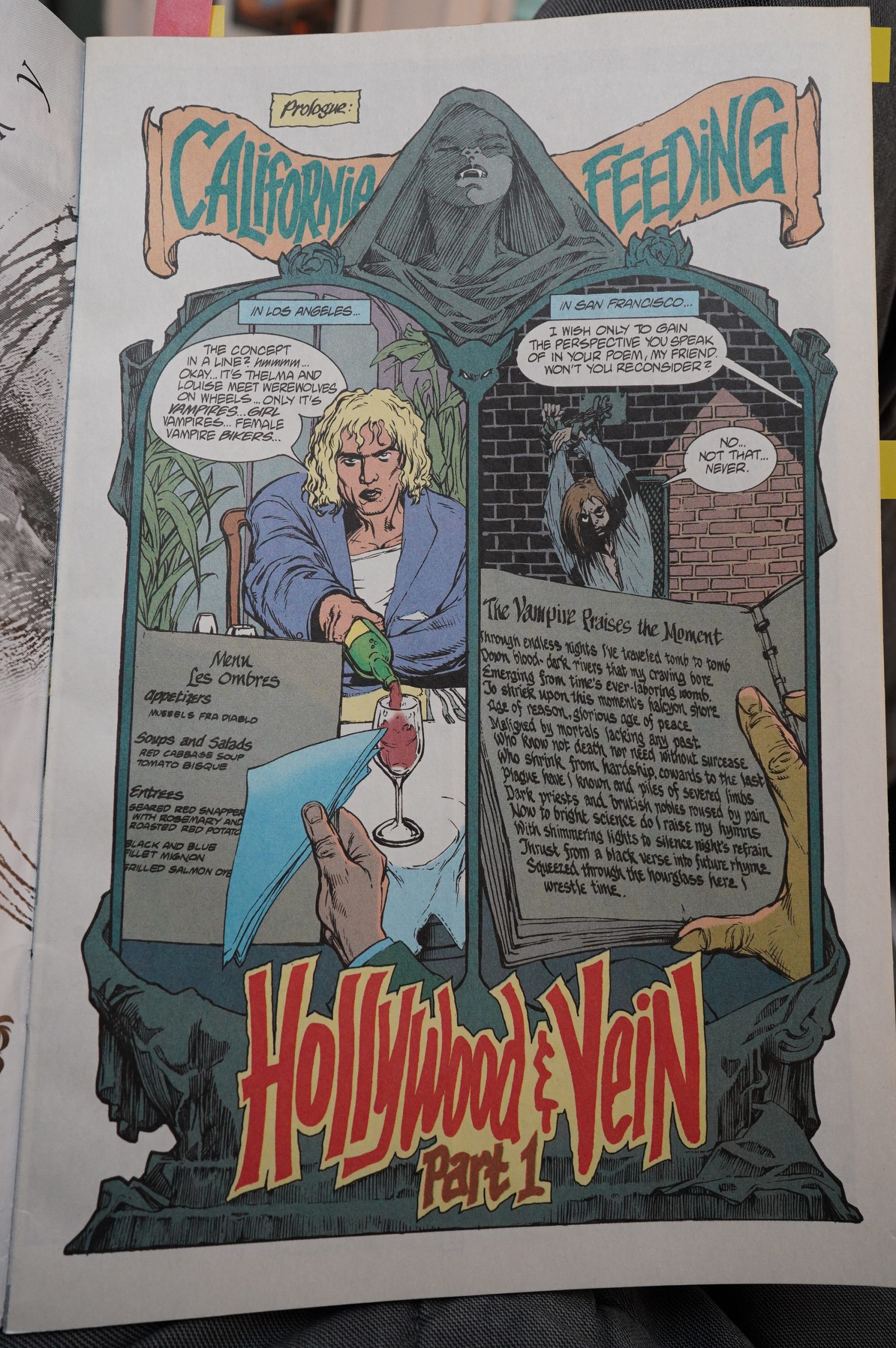 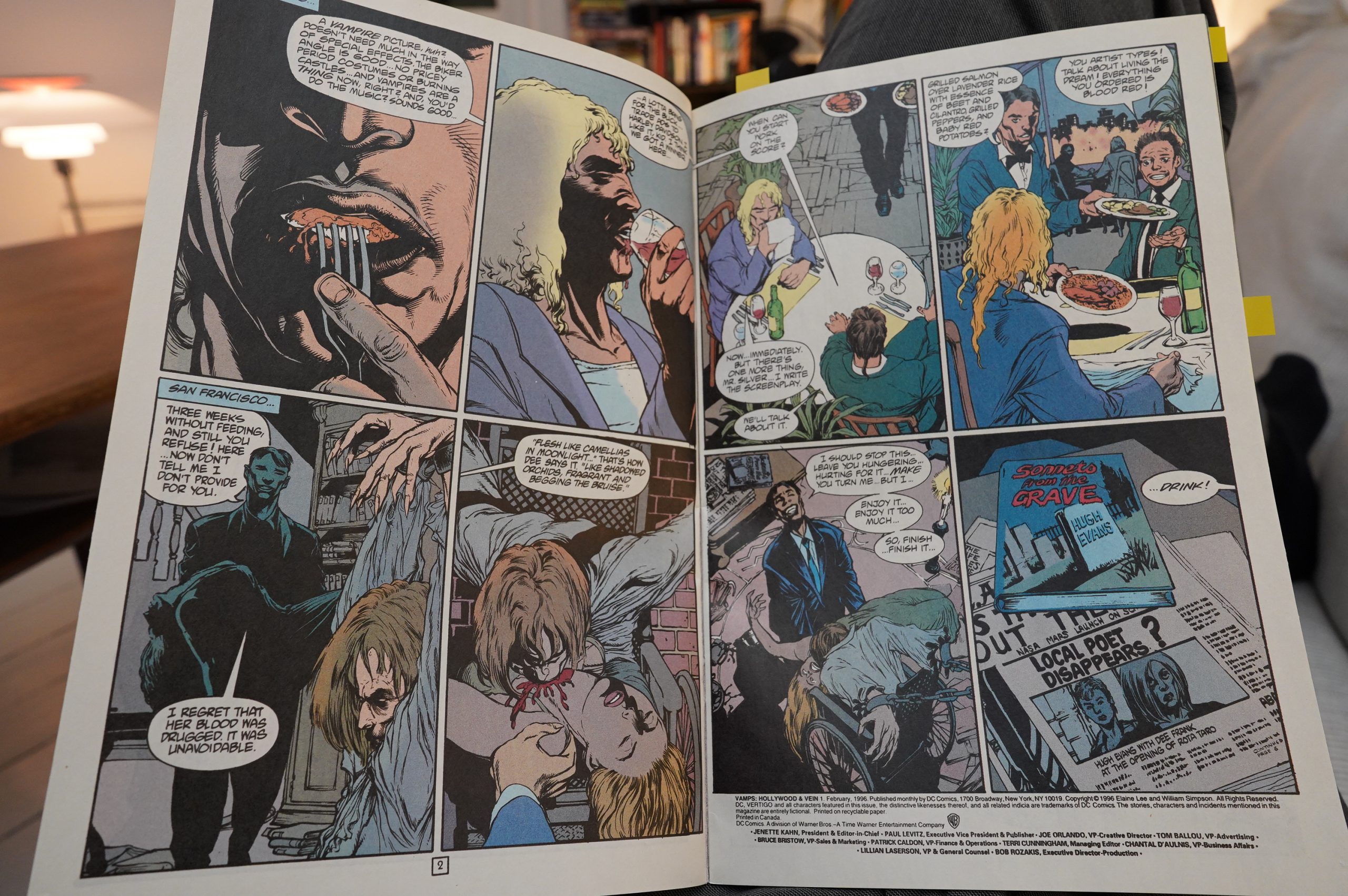 Oh, the art style has changed substantially since the first mini. I felt that looked very Neil Adams/Dick Giordano-derived, but this has a very different feel. I love the Muñoz-via-Giffen shadow over that guy’s face in the second panel, but that’s unfortunately the only instance of that in the book…

But most of all, the colouring doesn’t suck! It’s really good. It’s Tatjana Wood. 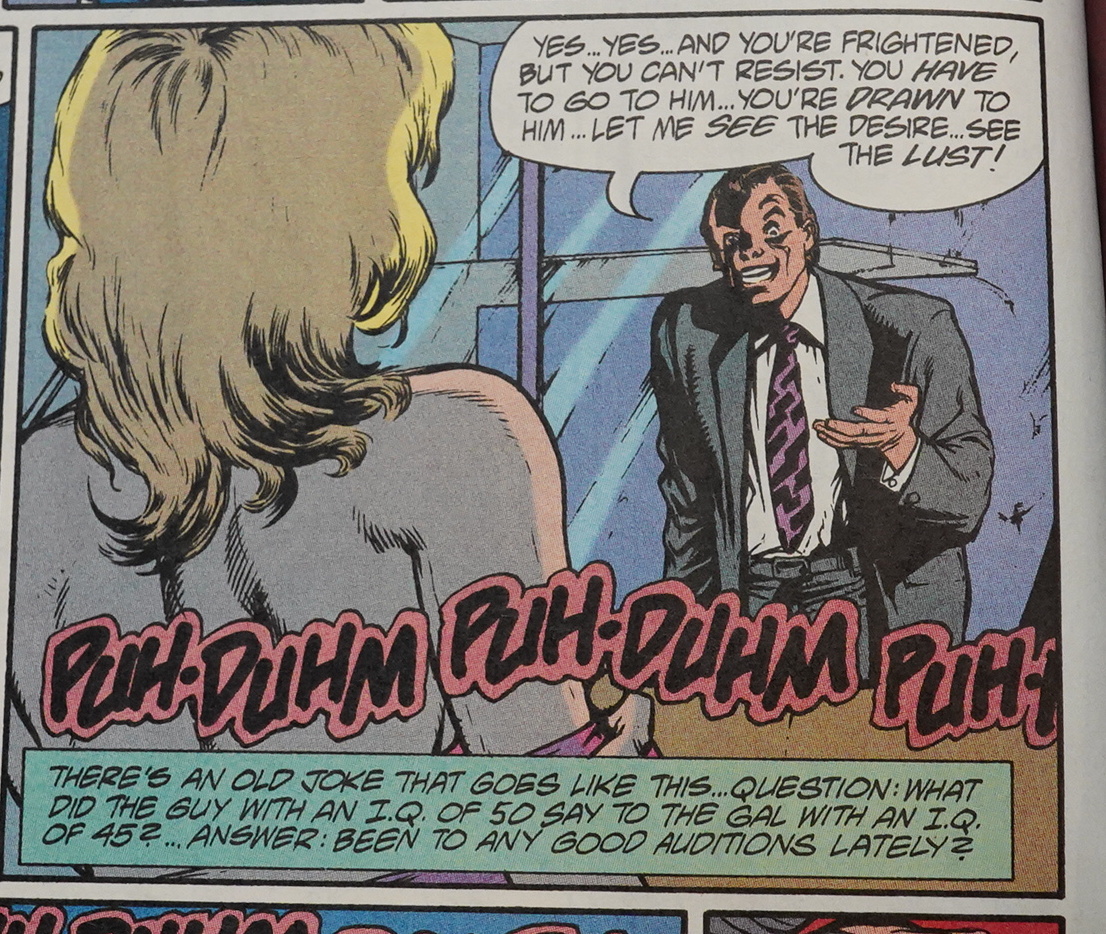 The faces still have a tendency to go all kinds of awry at the drop of a hat, but that’s fine.

Anyway! Lee is a playwright and an actor, and this is set in Hollywood, so we get a ton of Hollywood-related jokes, like the one about the two actors above. 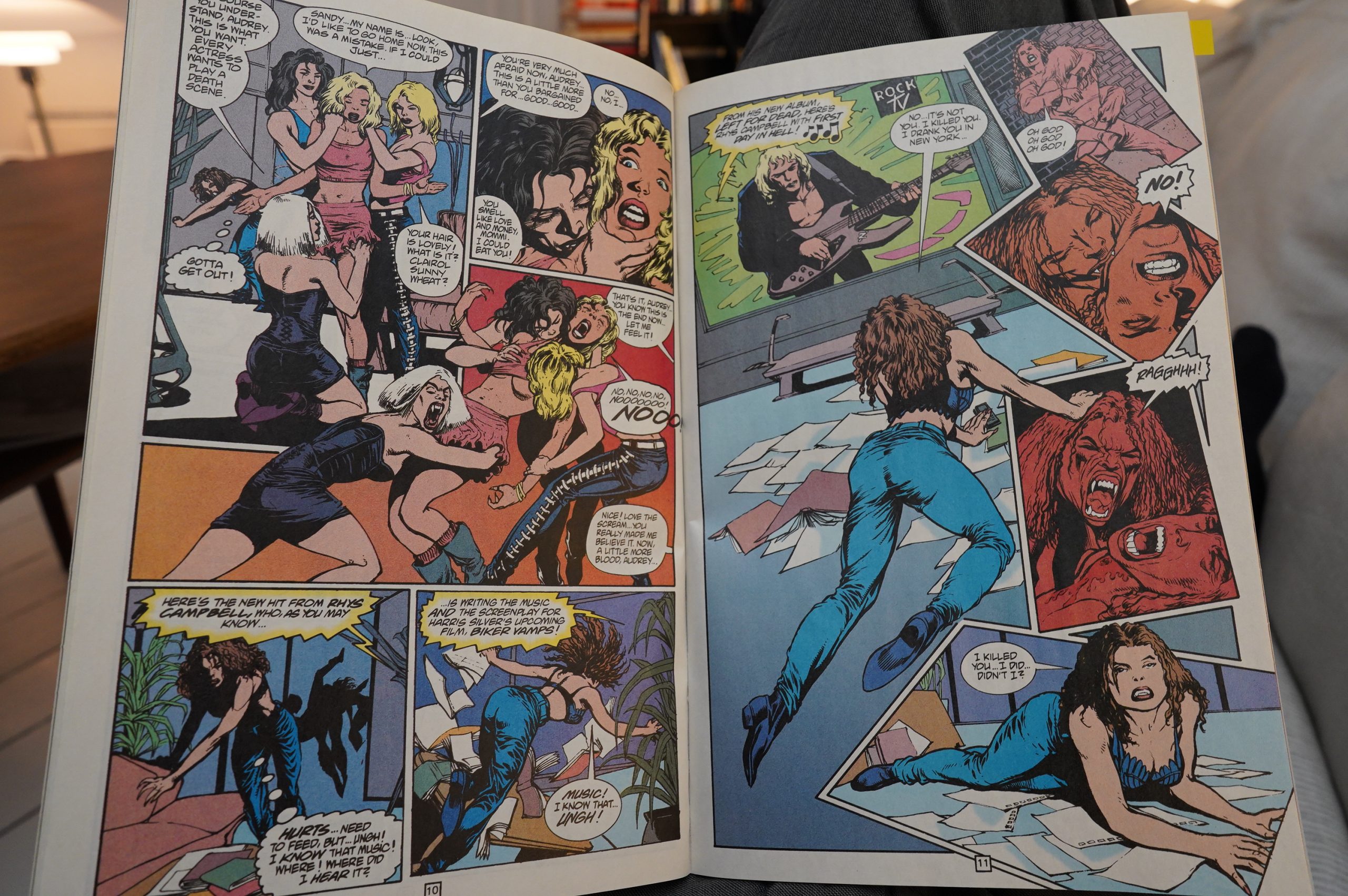 With Wood’s colouring job, it’s easier to keep the characters apart, too, although when they bring in new women to be killed, it sometimes gets a bit confusing.

And, yes, the vampires are still as killingest as ever. 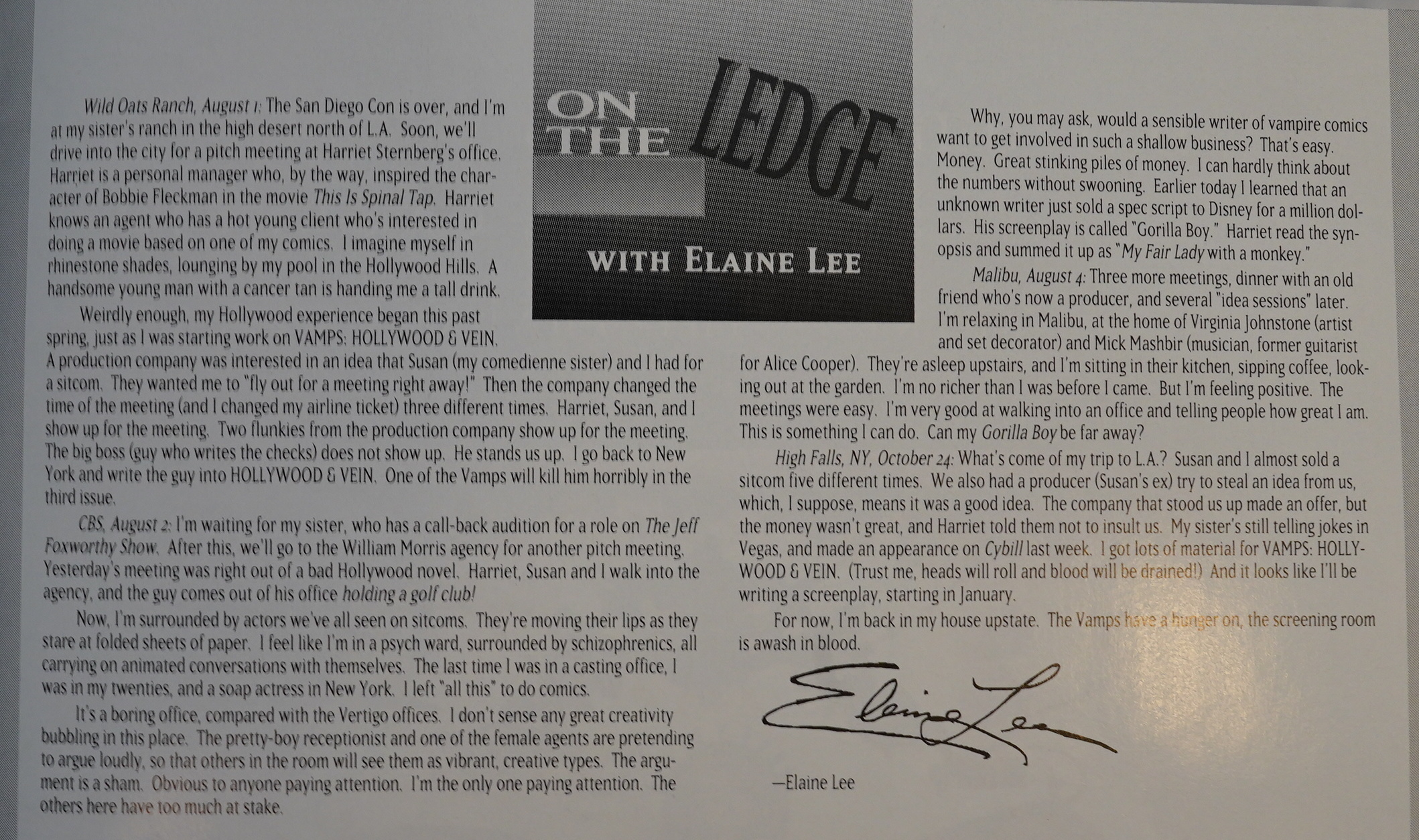 Lee writes an introduction to the series by explaining that she and her sister had been spending lots of time in various Hollywood offices lately, and she’d be killing of numerous people she’d met over the course of the series. 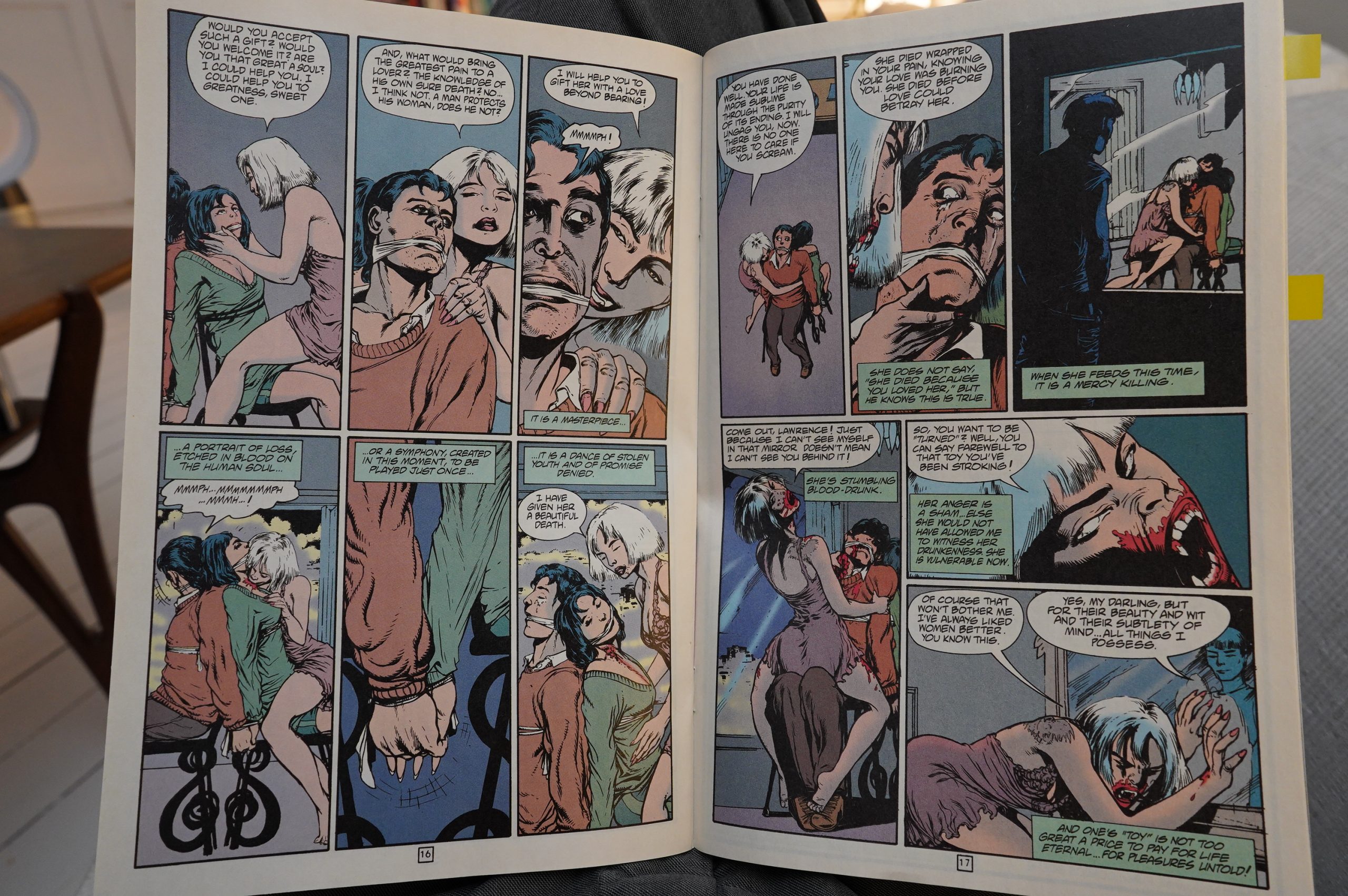 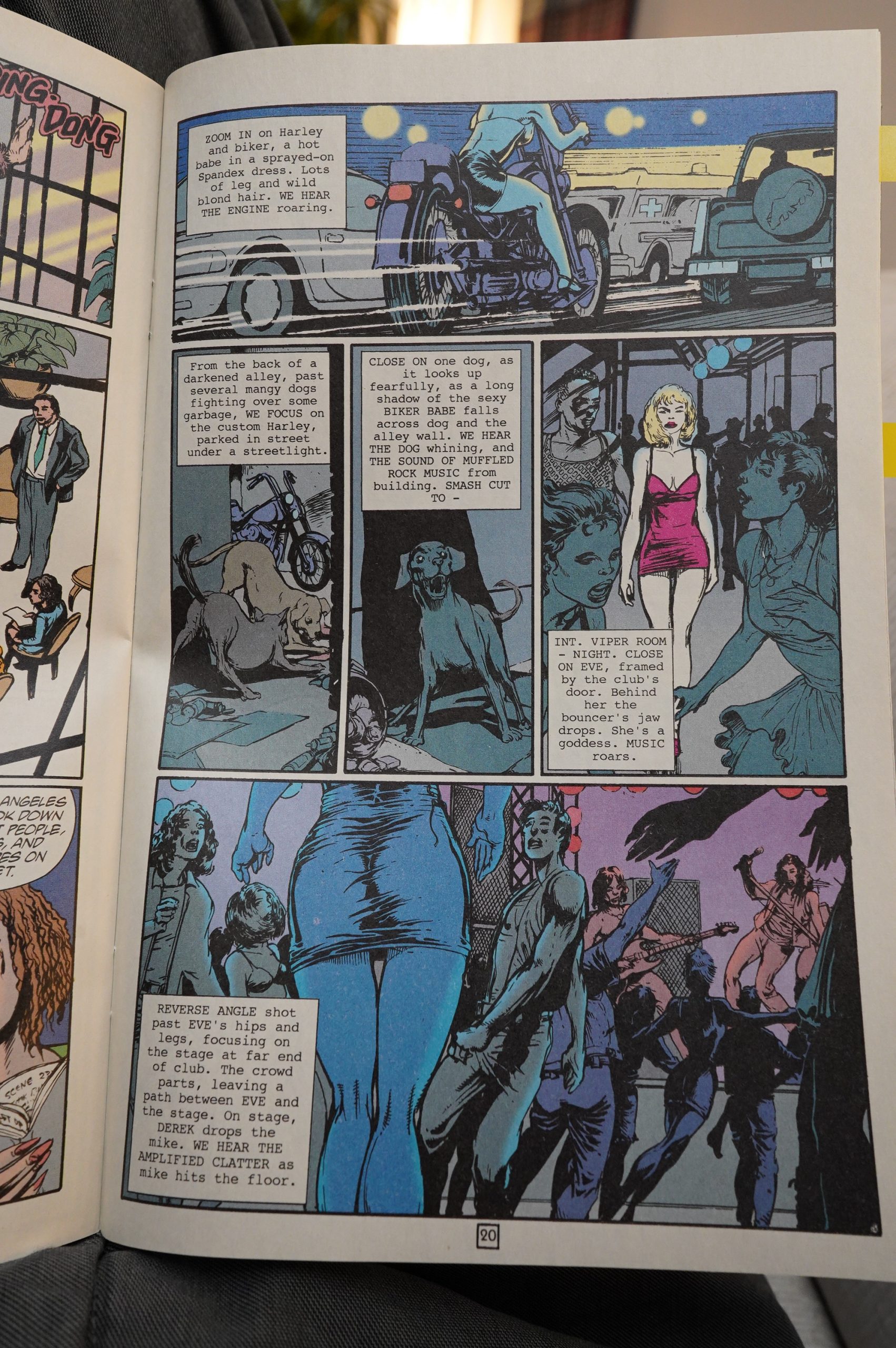 The Vamps are in Hollywood to make a vampire film… and when I saw this scene, I thought we were in for a super-meta commentary on the first mini-series, because this is a scene that happened there, too, but in “reality” that time. 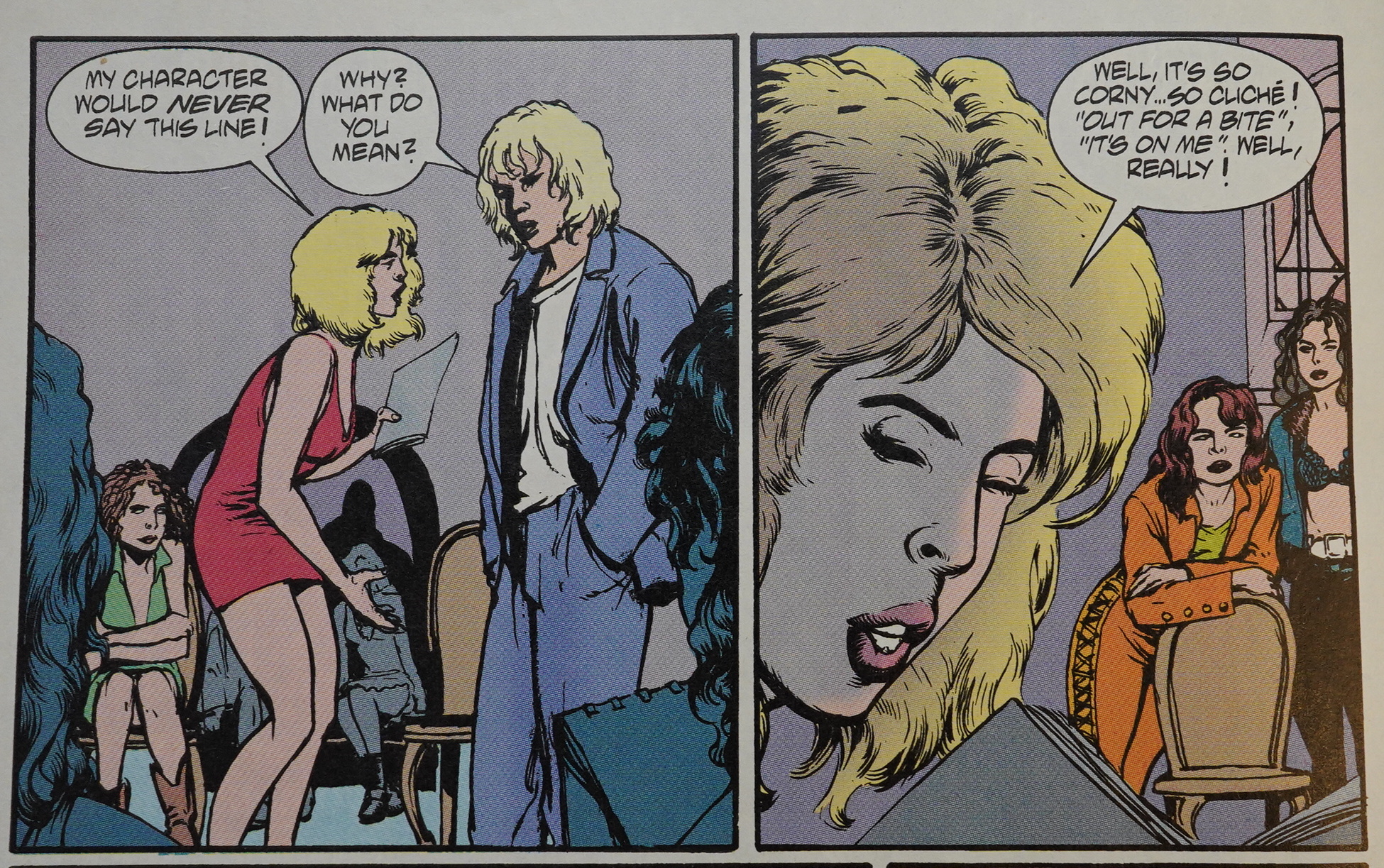 And that was a line from that series! So I was thinking that the “fictional” movie in this series was going to be an exact retelling of the first mini-series, and I was all aboard for postmodern shenanigans, but… that’s as far as it goes, really. The guy writing the script here had a minor part in the first series, and the script touches upon what happened to him.

(Note sudden long and weird face in the right-hand panel.) 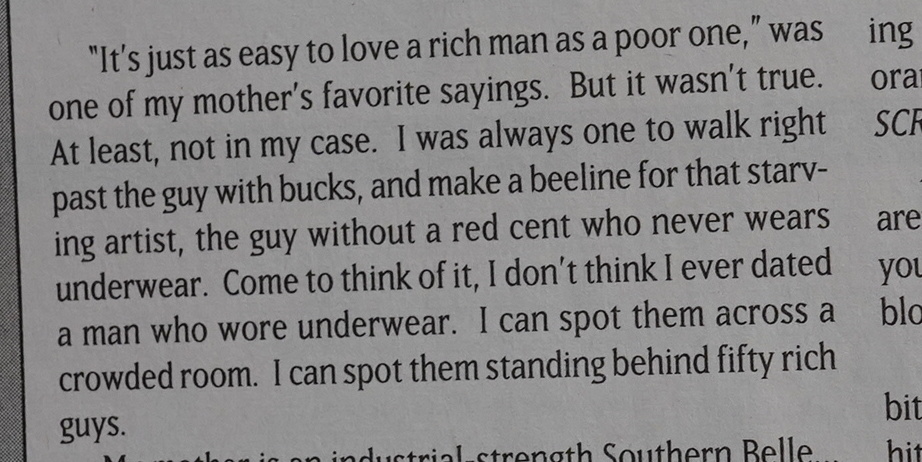 I had no idea that underwear was such a class signifier in the US! 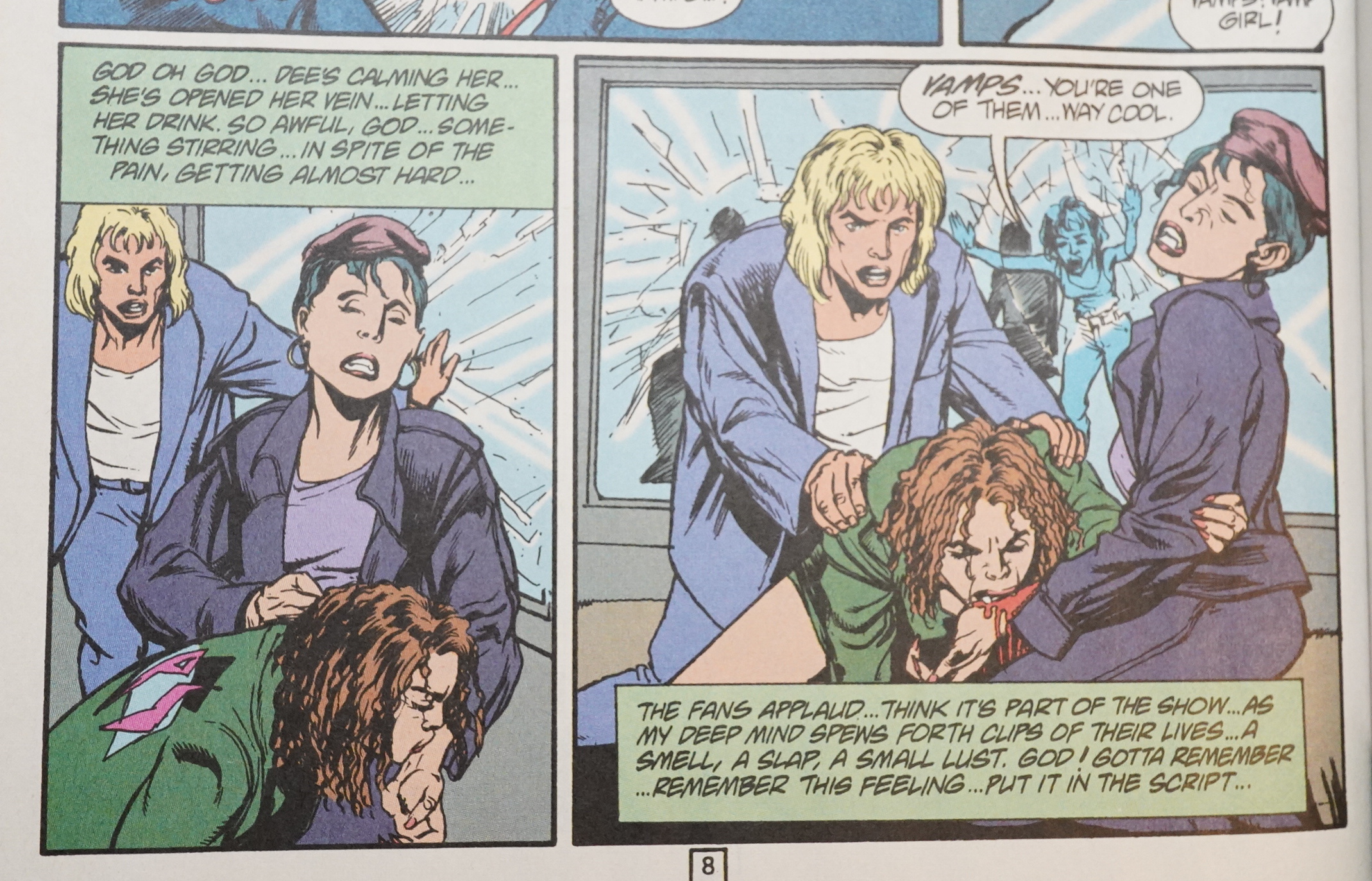 The series has a lot of fun little scenes (like the above where the scriptwriter reminds himself to remember to put what he’s experiencing into the script)… but the series as a whole feels oddly static. The first series was a road movie: It has propulsion built-in. In this series, it feels like we’re spinning our wheels a lot of the time without getting much further.

And there’s, like, only a handful of factions plotting against each other, so it feels like a very sparsely plotted series… as Elaine Lee series go. She’s usually got tons of interesting ideas, and that makes for dense reading experience (which is both a positive and a negative). I found myself wishing there was more than just a movie being made, a guy kidnapping a Elizabethan poet vampire and keeping him in a dungeon, and that woman up there letting blood from his fans and trying to find him, and the scriptwriter coming to terms with being a half-vampire, and

OK, there’s enough stuff going on here for a number of series, but still! 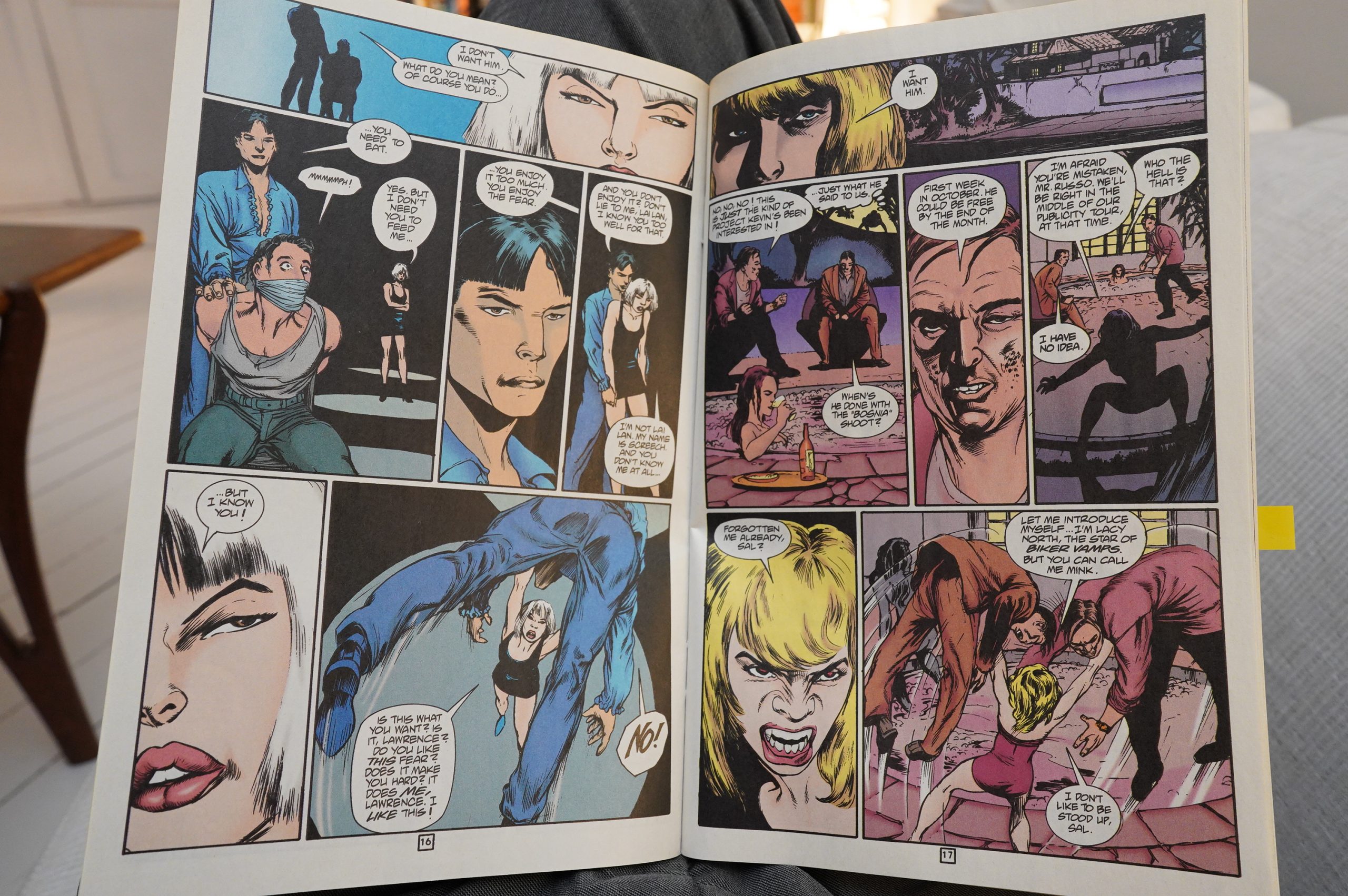 There isn’t much of formal interest in the book, but you do have the occasional spread where there’s something fun going on. Here we have a mirroring of the actions of two different vampires, with I don’t want him/I want him. But it’s just aaaalmost mirrored… which moves it from OOOO to hmmm… 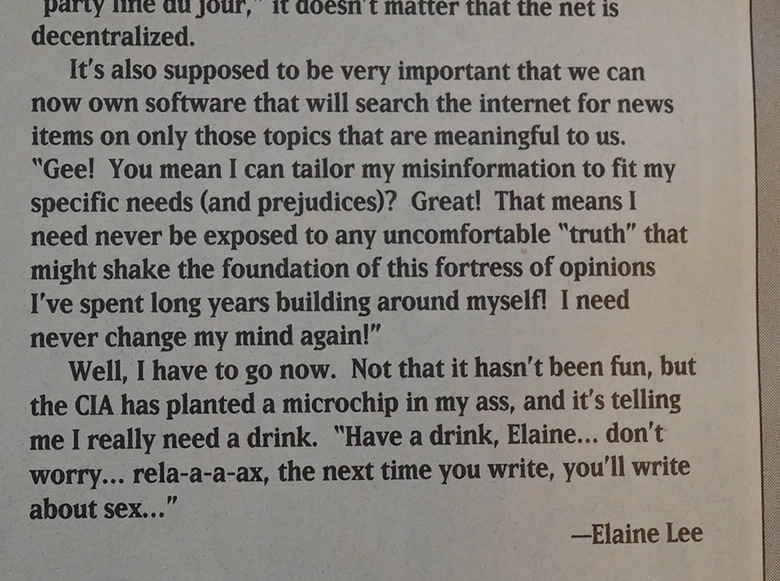 Lee writes presciently about Internet echo chambers and bubbles. In 1996! 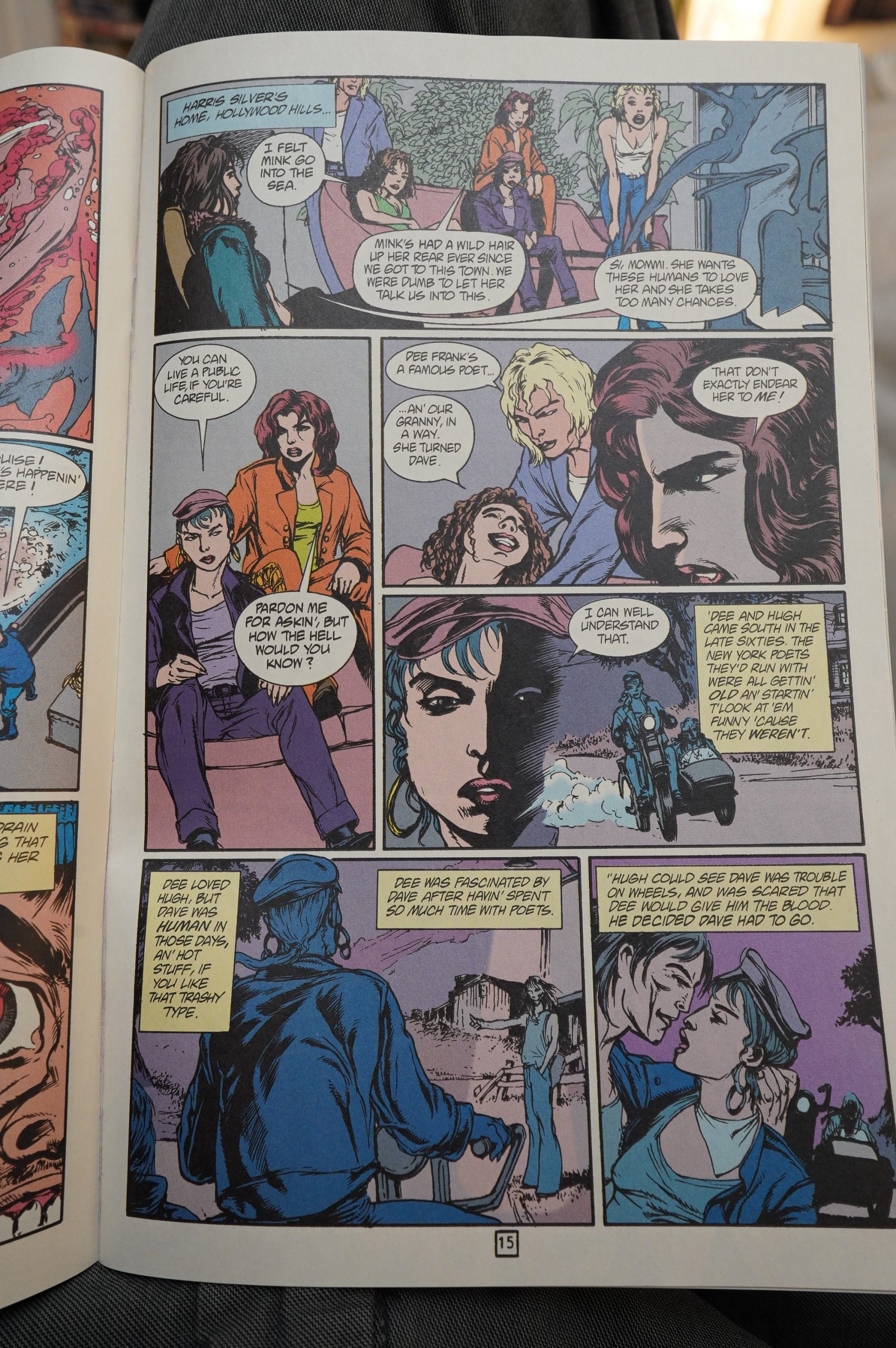 Part of the feeling of spinning our wheels is that we get the backstory to basically all the characters. It’s not that those bits are boring or anything, but these bits seldom develop the plot itself… 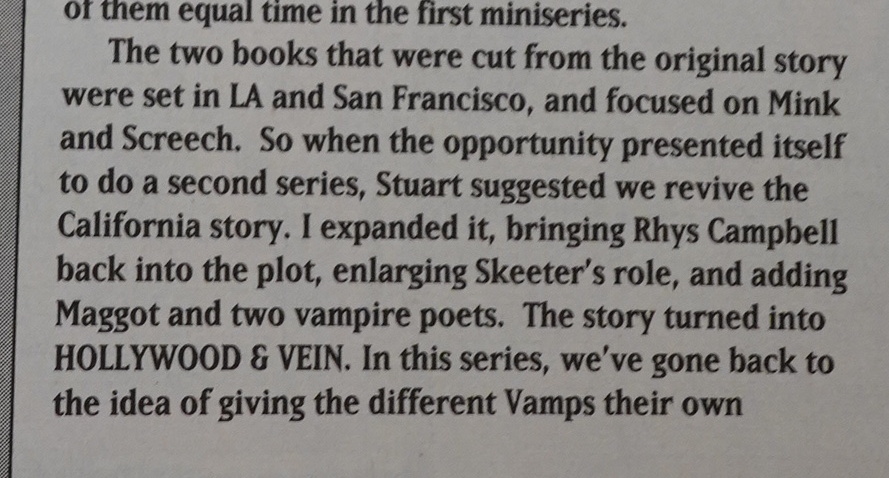 Hm… the first series was meant to be eight issues, but was cut down. And the bits left out served as the starting point for this series. I wonder whether that’s why it feels a bit undercooked… 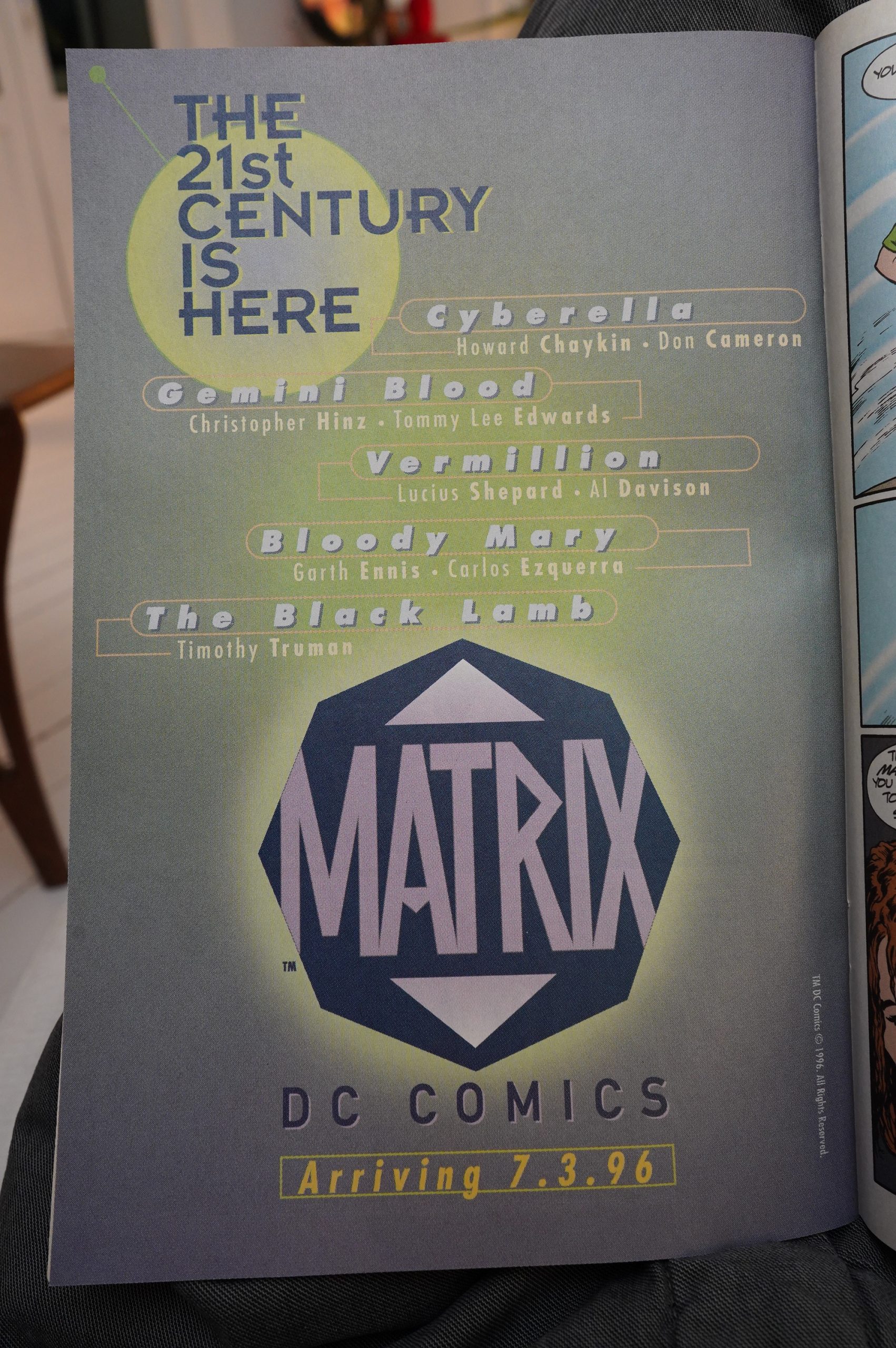 Huh. An ad for what became Helix, I guess? Somebody had dibs on Matrix already, I guess? 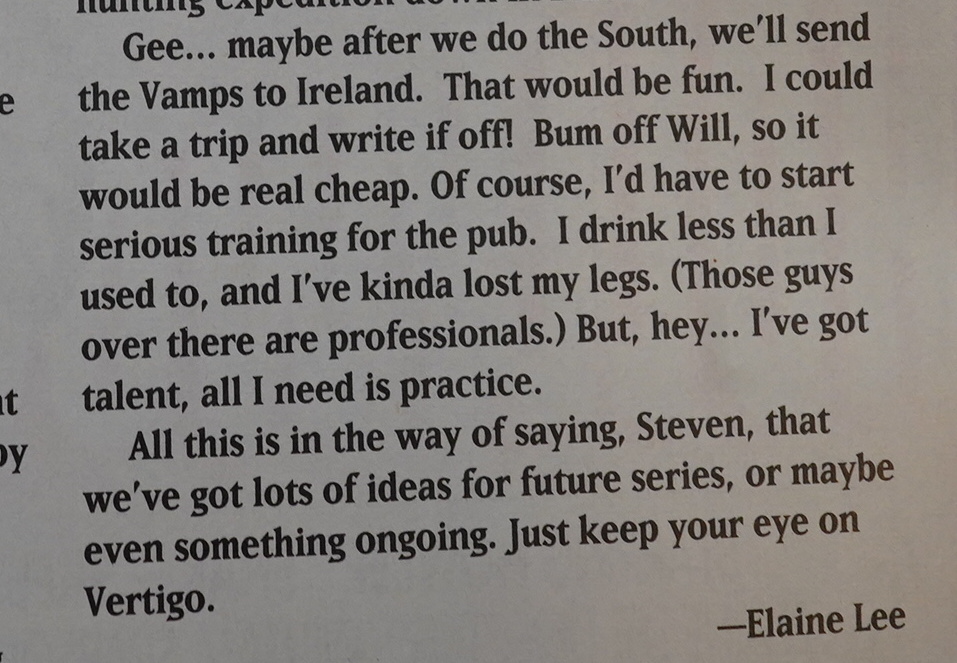 In the final issue, Lee explains that she has tons and tons of ideas for further Vamps series. We’ll see whether they turn up in the next series…

VAMPS represents a potentially
lucrative property for Vertigo, DC, and maybe
even Time Warner. From a marketing
standpoint, it’ s a sure bet— a steamy potpourri
of blood-lust, motorcycles, scantily-clad
vampiresses, and the usual gothic bombast.
The sales for some of the other Vertigo titles
may be plummeting, but Vamps is an almost
certain winner in today’ s cut-throat marketplace.
The V amps themselves are five tough-and-
tender daughters of the night. In the first mini-
series they broke their bonds of servitude and
now, in series number two, they have arrived in
Hollywood. Perfect. As DC’s rhapsodic pro-
motional material points out, “there are lots of
Other bloodsuckers in Tinsel Town, and most Of
them aren’t even vampires!”

The “look” Of this kind of comic book is as
important as the actual story line, of course.
William Simpson’s pencils and inks seem well
suited to the material —he has a good time with
the party scenes, and Can draw a mean set of
fangs — and Tatjana Wood will undoubtedly
do a first-rate job as the book’s colorist. (I was
senttheblack-and-white
preview so can’t tell for sure.) Pete Winslade’s
painted covers, along with Vertigo’s hard-sell
marketingefforts, are also likely to help entice the
reader to pall with his or her hard-earned cash.
All ofwhich will conspireto ensure that Vamps
looks the part and finds its appropriate market
niche. But I can’t help feeling that this project is
a glossy vehicle through which DC can
help develop its latest corporate property. Imagine
the B)ssibilities —buttons, t-shirts, web sites, [X)rce-
lain statuettes, movie television rights, the whole
gamut — because DC
is already counting
the cash. •

Uhm… I don’t know whether they were thinking about Vamps buttons, really.

This series was reprinted in the recent complete Vamps collection.

One thought on “ELC1996: Vamps: Hollywood and Vein”