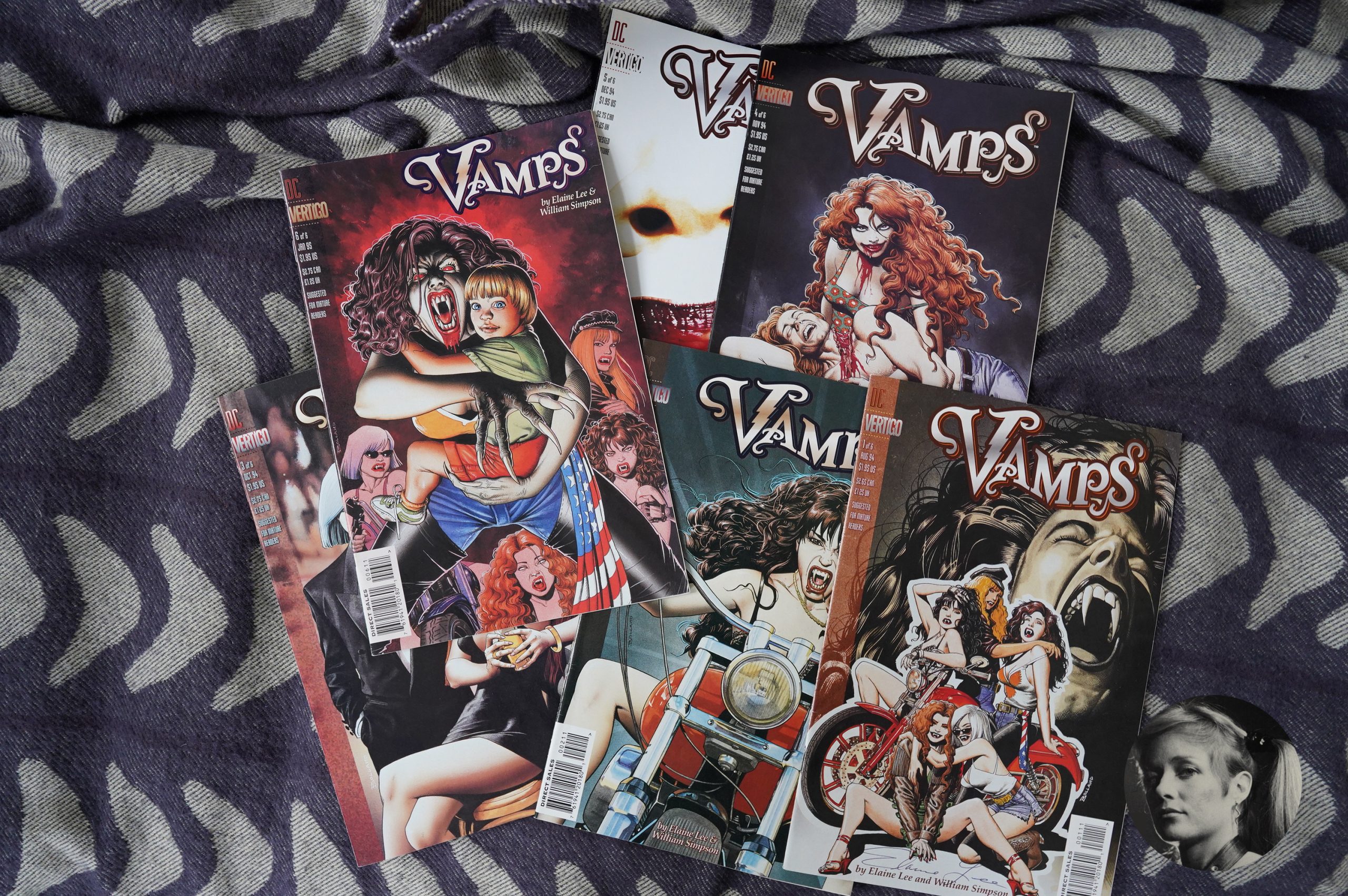 Vamps #1-6 by Elaine Lee, William Simpson and others, published by DC/Vertigo.

I’m guessing this is the most commercially successful series I’m covering in this blog series — it’s got two followup mini-series and has been collected later. 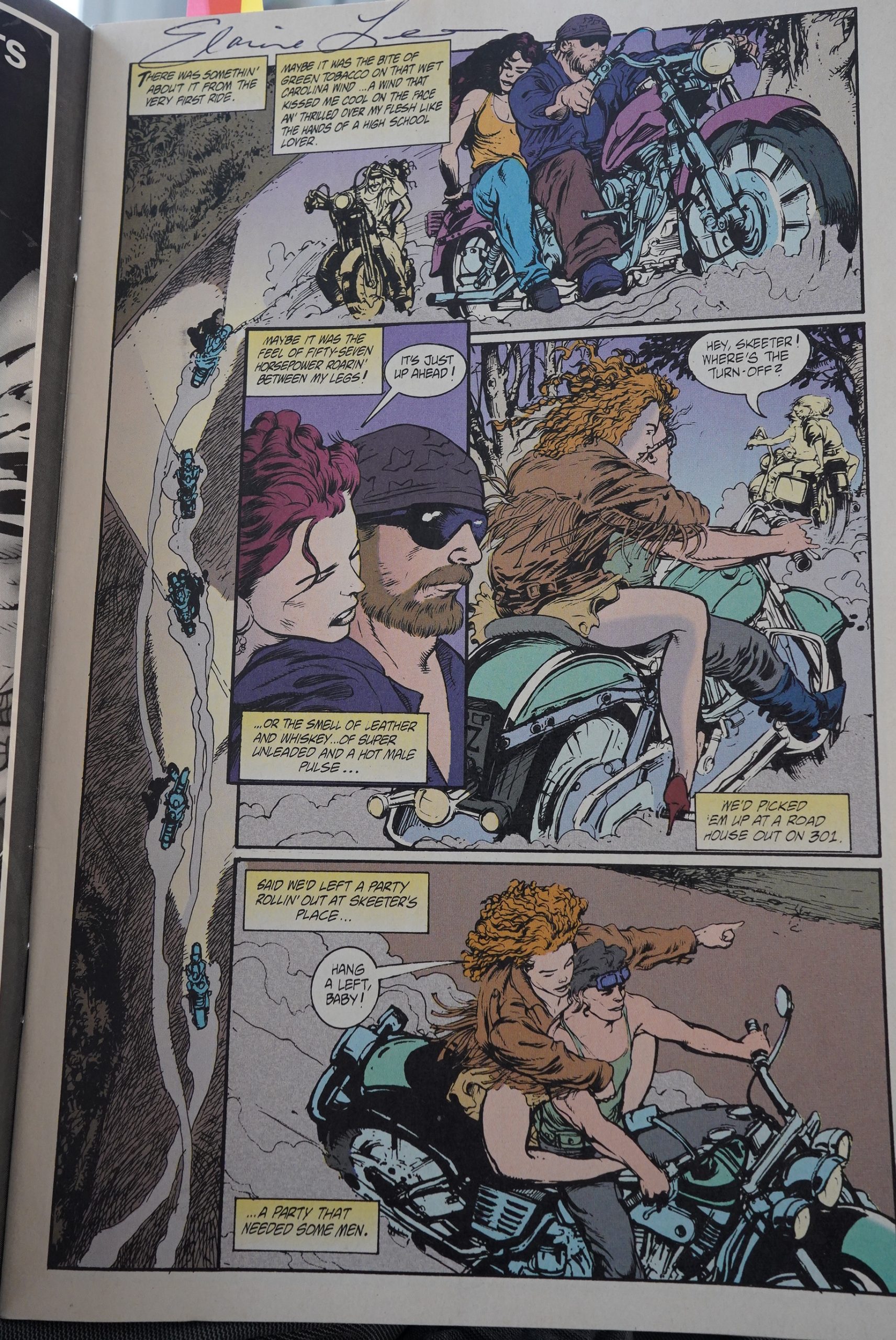 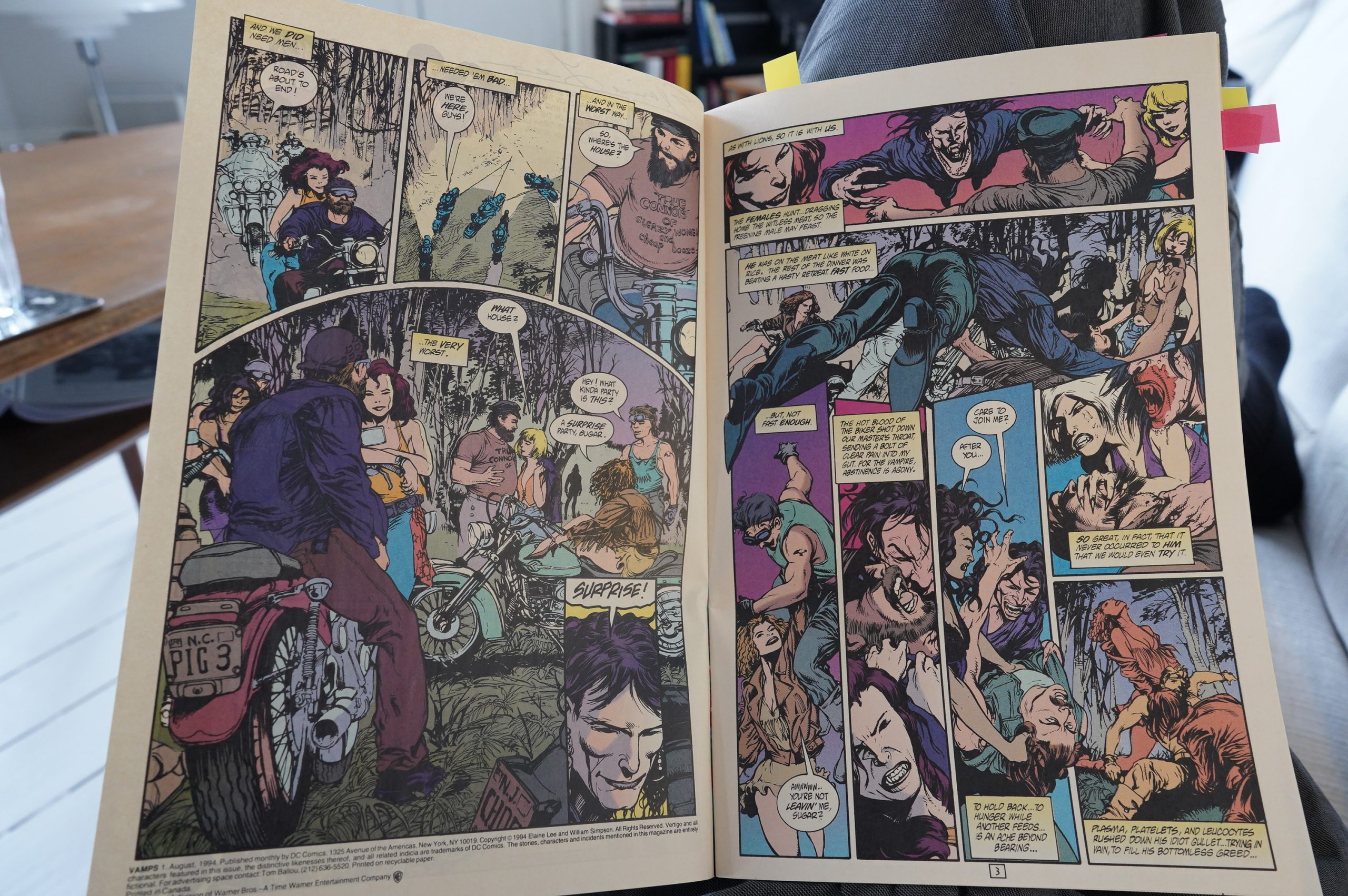 Hey! This is a signed copy! Look at the top of the first page. Now I feel all special…

Anyway, this seems to be a book about… vampires? I know, the title sort of gave the game away.

I can’t really say I’m finding the artwork very inspiring… it looks like Simpson is sort of going for Neal Adams, but not really… getting there? I’m also finding the colouring to be kinda annoying, for some reason: Doing stuff like the bottom right panel (with characters in a block of colour) can be a very effective tool, but here it just seems ugly and sloppy. It’s just so pedestrian.

Aaargh! I have to find a different solution to these blurriness issues: I had hoped that with the better stabilisation in the Sony camera, I could do away with extra sources of light (because that’s so boring to set up), but apparently not.

Anyway, I do think that sated, gorged vampire is funny. 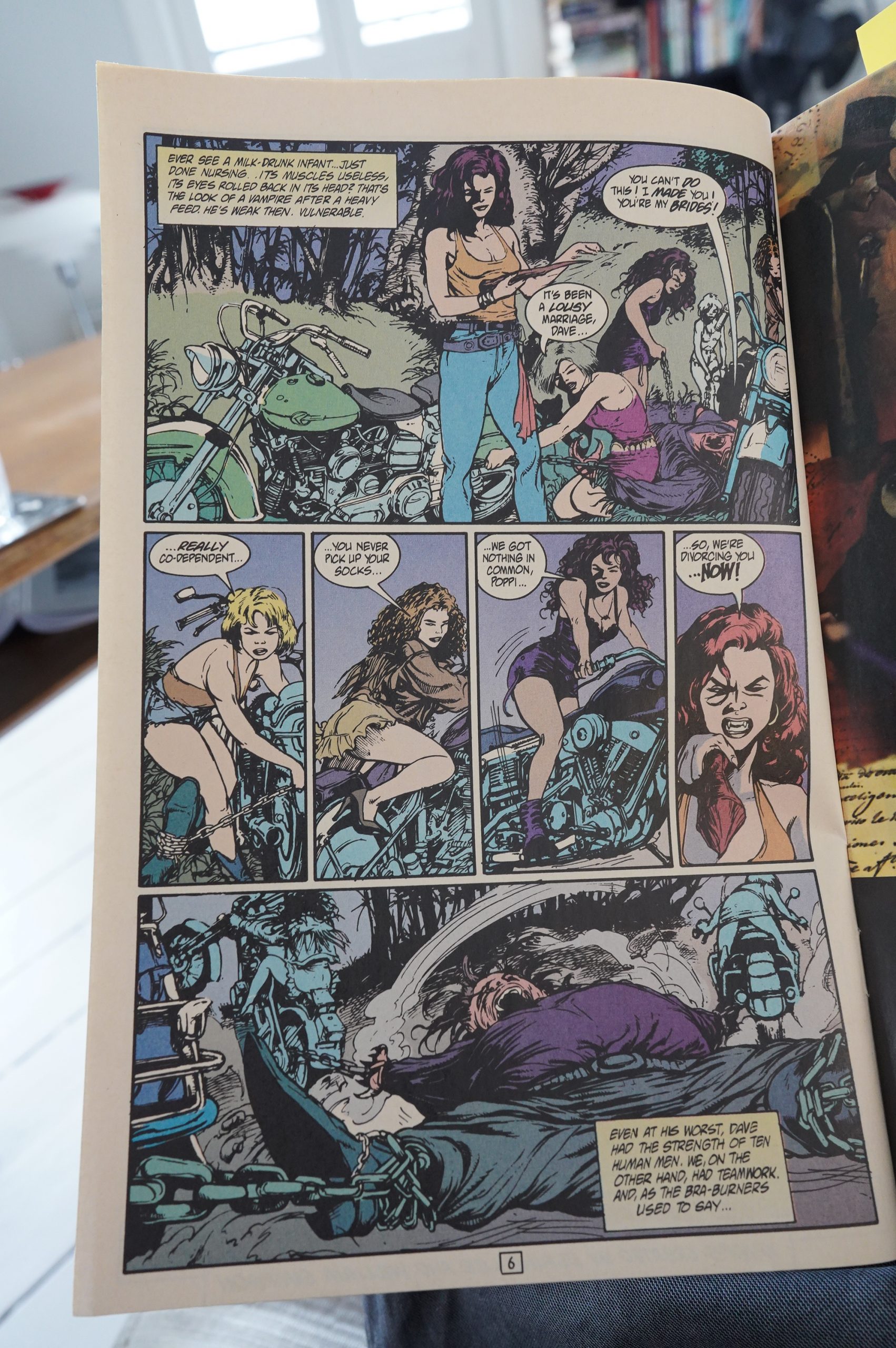 And then the other vampires kill him! It’s a fun set-up: You have these five vampire women freed from their vampire master, and then he can come chase them down, too, when he comes back to life (which I assume that he will). 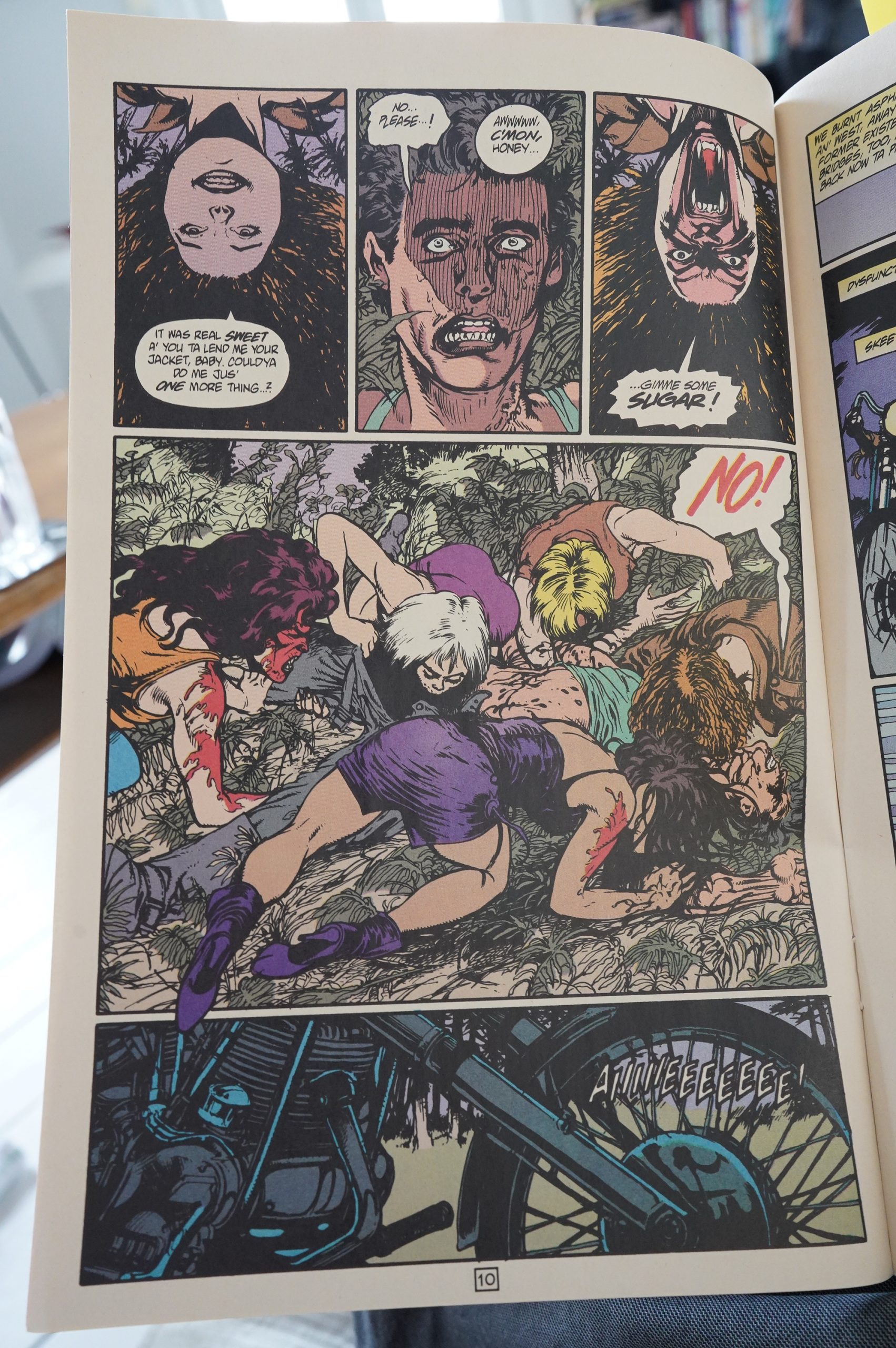 Writers usually go out of their way to make modern vampires either reluctant to kill innocent people (so they only choose bad people to kill), or make them all tortured about it. Lee will have none of that: These vampires kill random people in gruesome ways, and they have great fun while doing it. 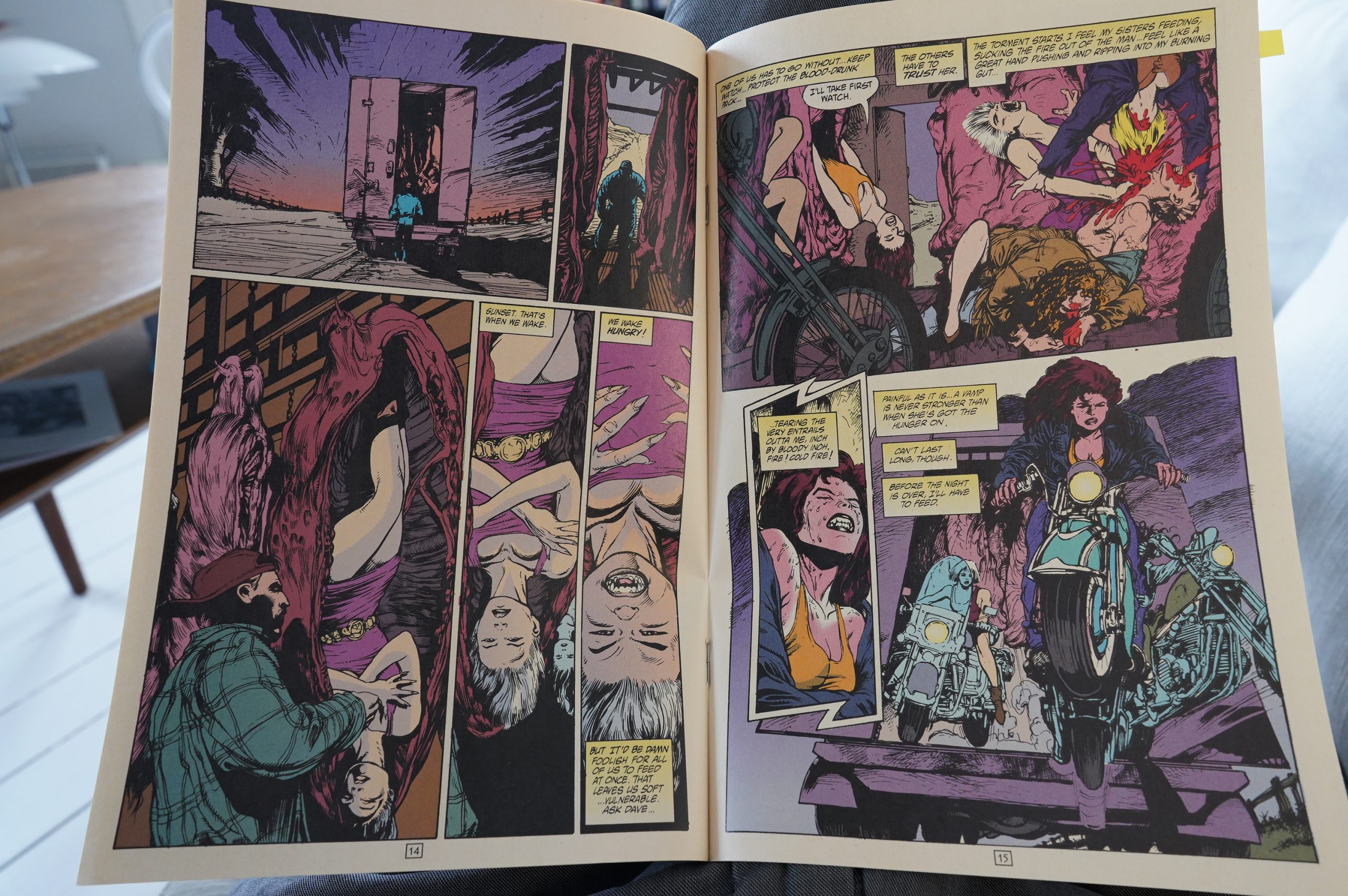 So what do we have here? Just pure nihilism? If your protagonists are just evil monsters that you’d rather see die on the next page, it can get difficult to keep the audience interested… 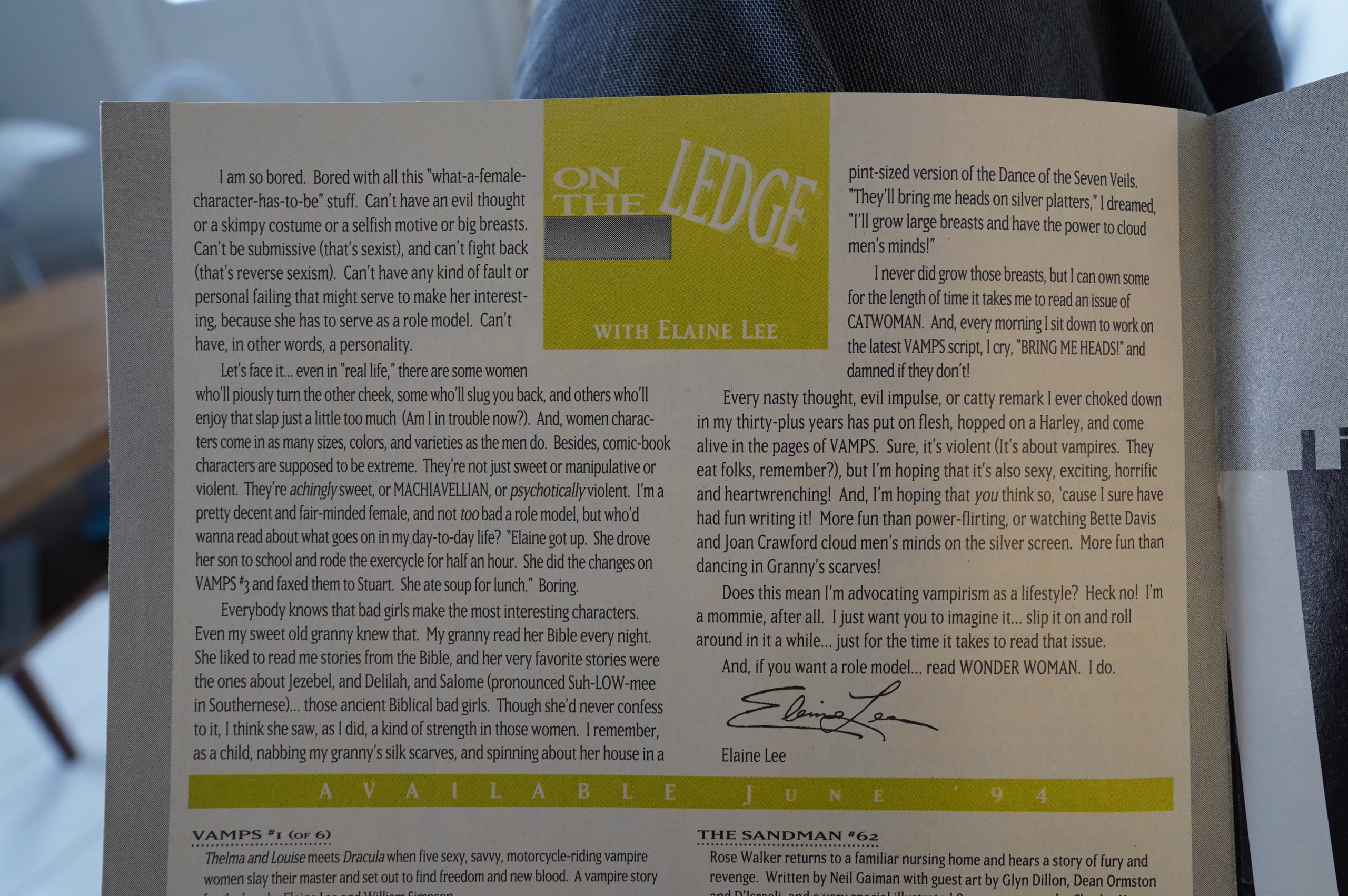 So Lee writes a very defensive introduction. Her defence seems to be “it’s only entertainment, dude”, as if that … makes much sense. 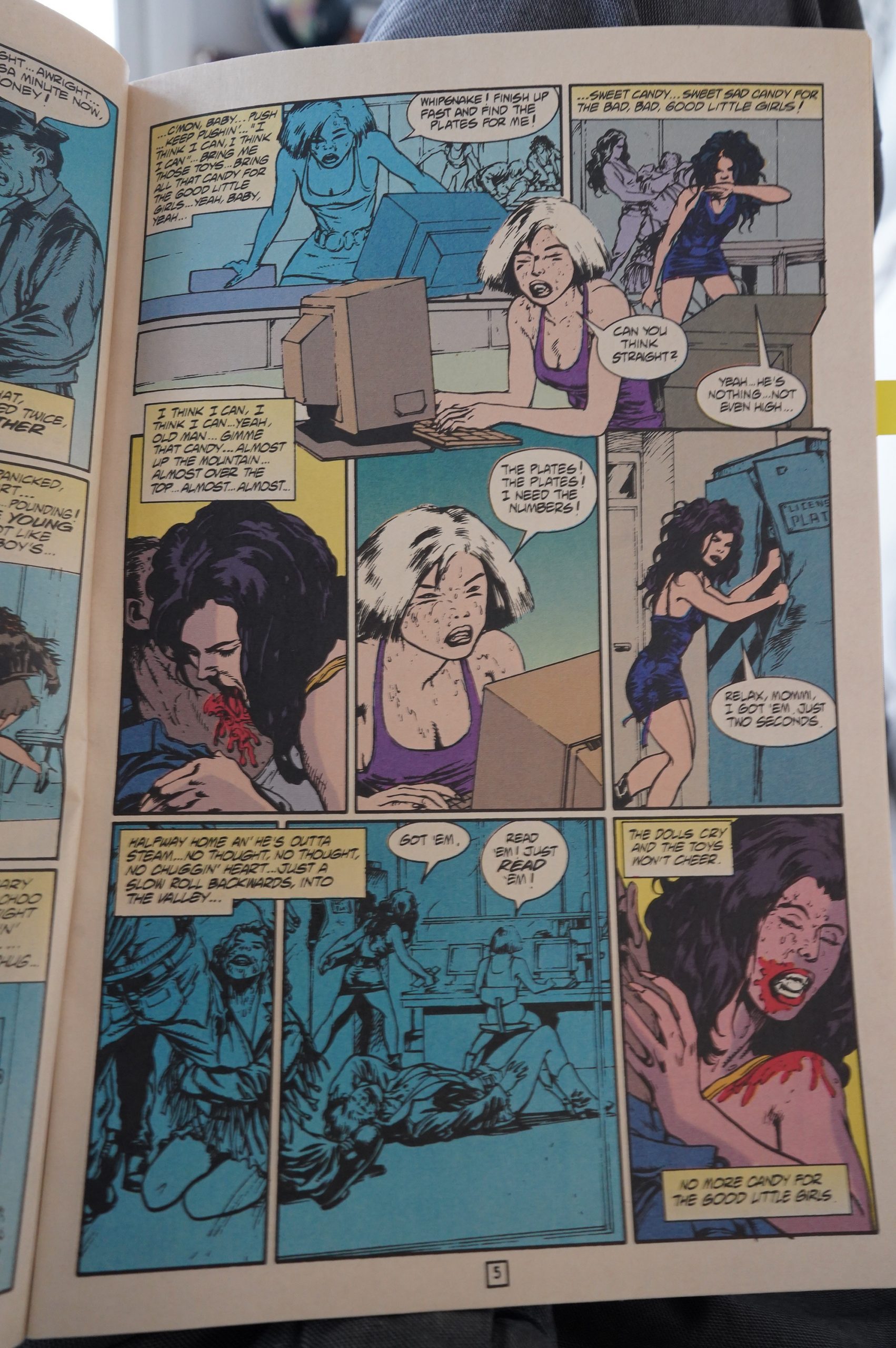 Again, I’m finding this colouring strategy pretty off-putting and confusing, and I’m just generally having a problem keeping the characters apart. I can tell the one brown-haired from the other because she says “mommi” in every speech balloon (thanks!), and she has slightly rattier hair, but that’s it. Their names don’t help, either. I think it’s… Whitesnake, Howler, Screech, Slater, Mr. Belding, Skeeter, Mink and Zack. Those are very confusing names.

(I may be misremembering some of those names.)

But one thing I do like about that page above there, is the way Lee perfectly describes the drunken/stoned state of these vampires (a major plot point is that vampires get really high from drinking blood). 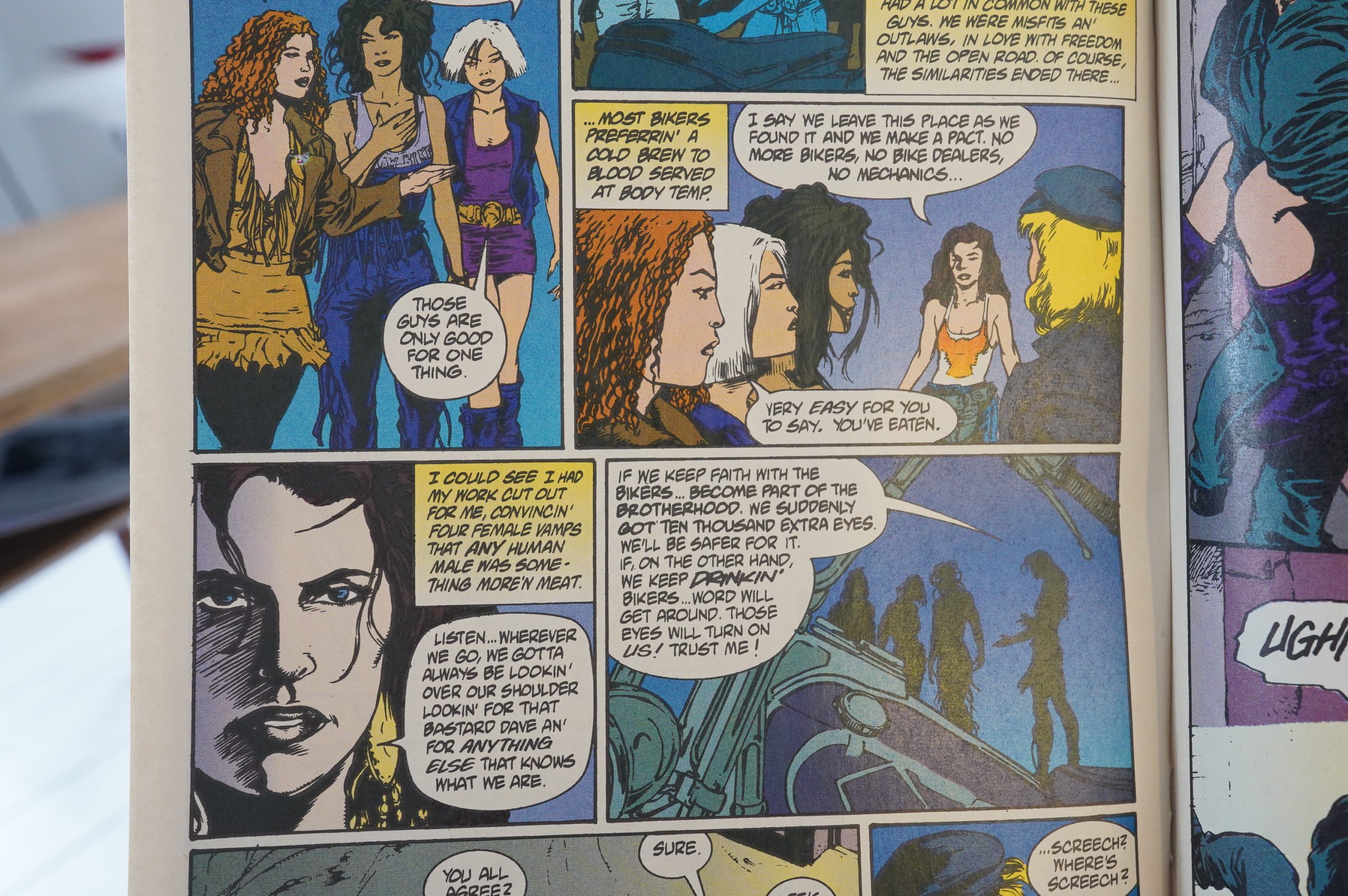 And then they swear to never, ever kill any bikers (or mechanics) again! Just when you thought they had no sense. 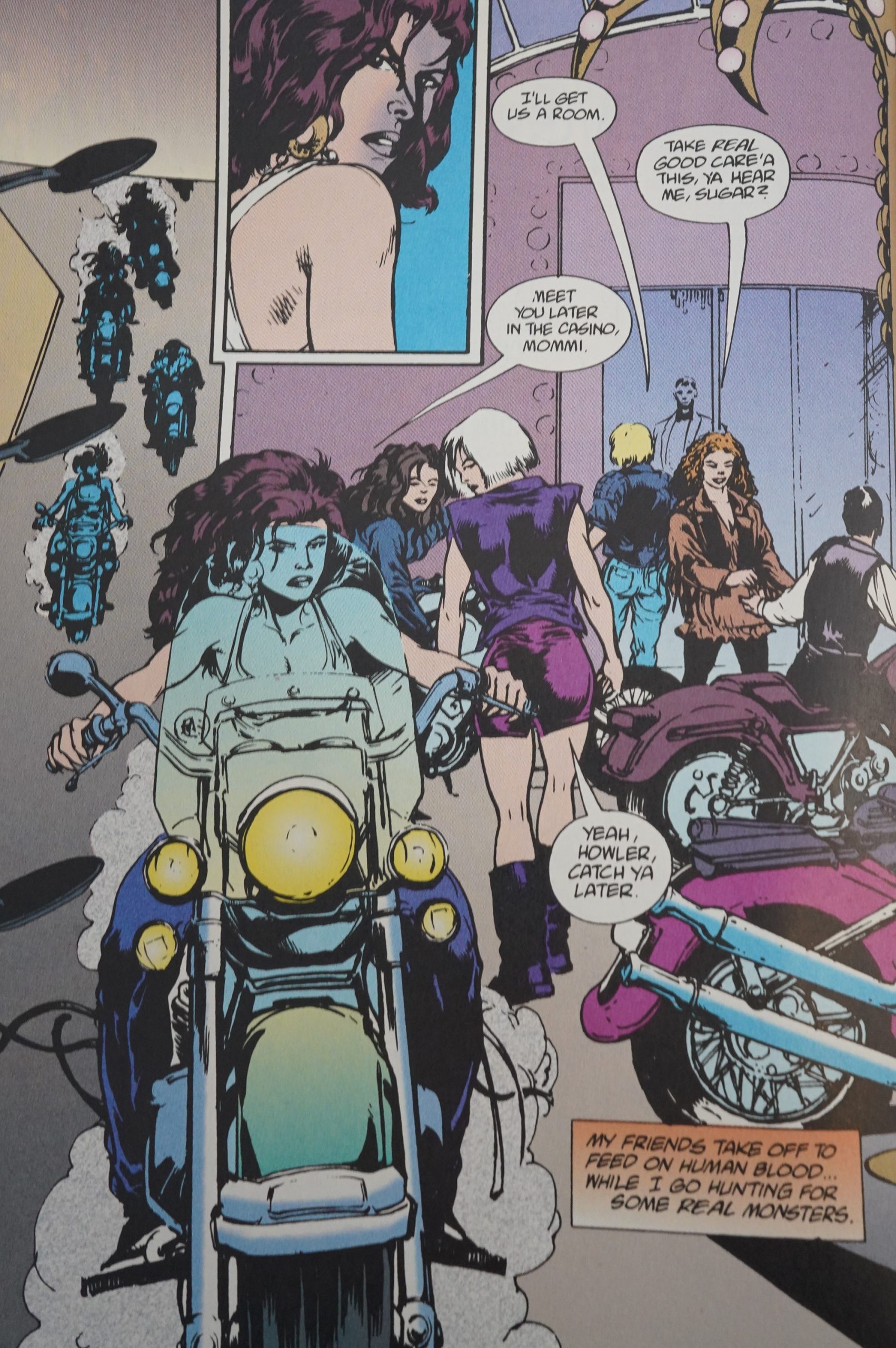 “Mommi”? Is suddenly the other brown-haired one (Screech? Howler?) saying “mommi”? (I can tell it’s the other because she has an ear ring.) Or perhaps the letterer just got as confused as I am as to which one is which and pointed that speech balloon at the wrong person… 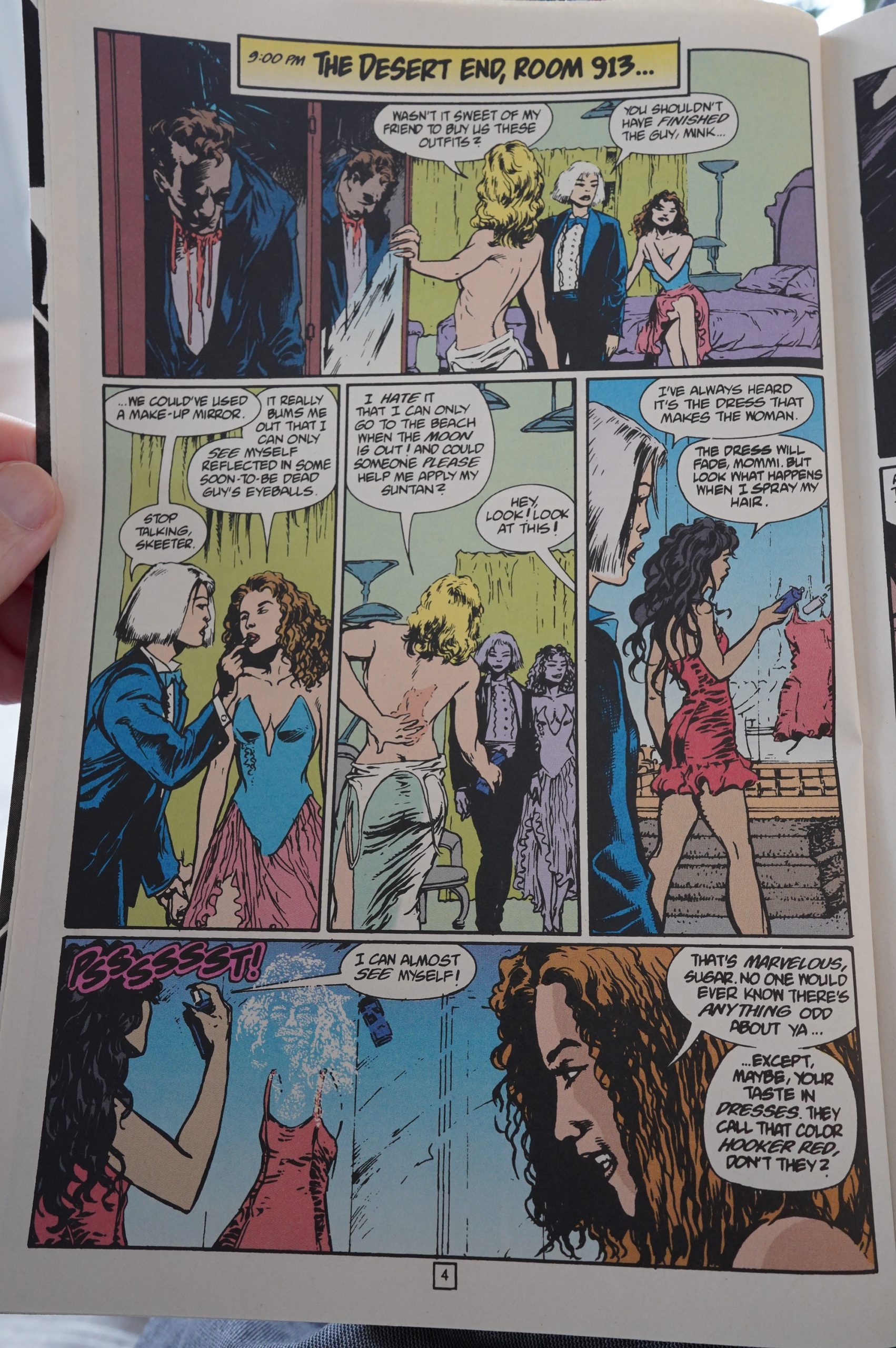 This page amused me greatly. Lee has a background in science fiction, and this sort of logical exploration of what it means to be a vampire is very sf. 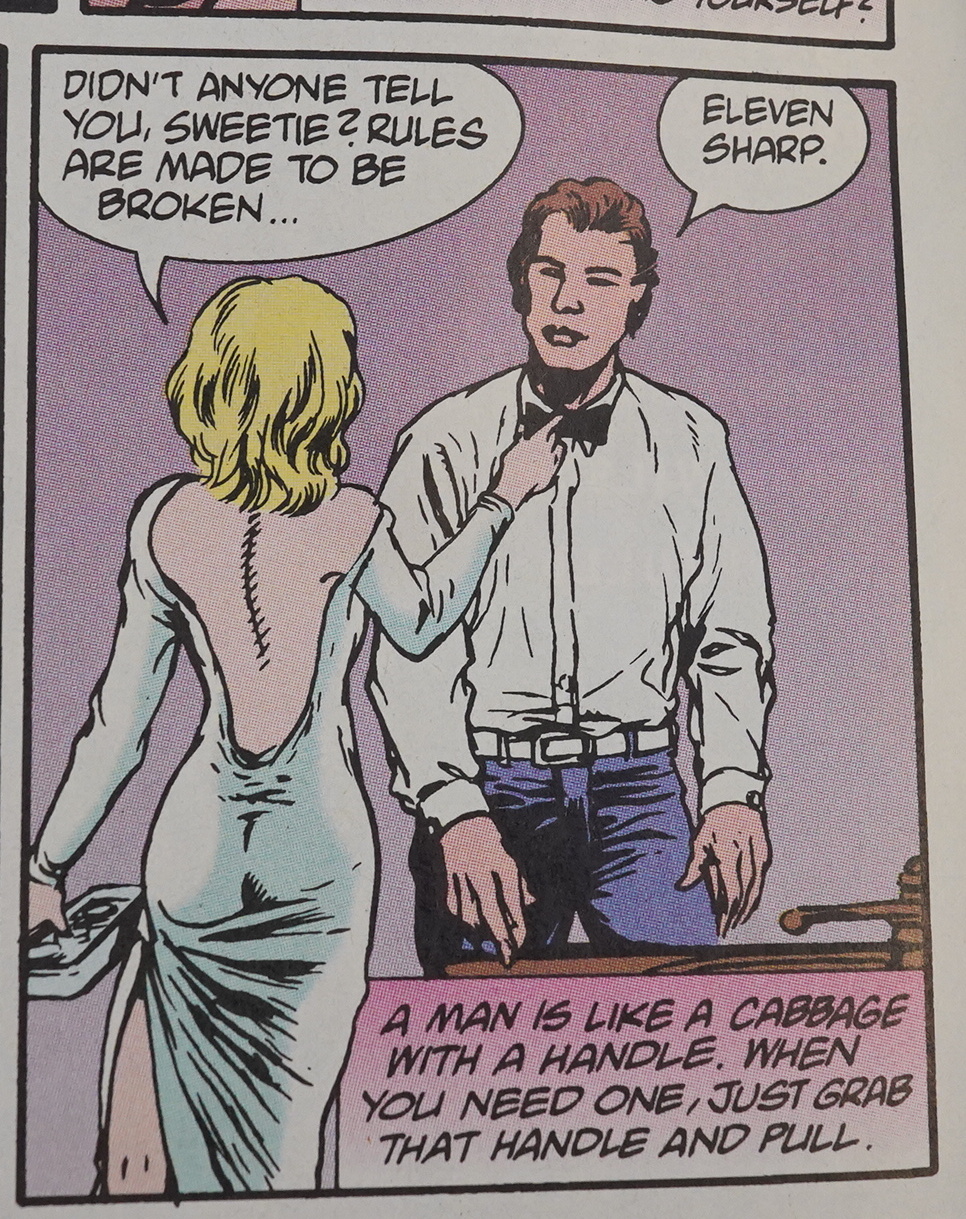 That must be one of those southern sayings: “A man is like a cabbage with a handle. When you need one, just grab that handle and pull.” I’m going to put that into all git commit messages from now on, because of course I totally understand what it means. (Please leave notes in the comments section.)

The prize for Least Insightful Letter goes to this one, I think. I’m not sure there is any logic there… 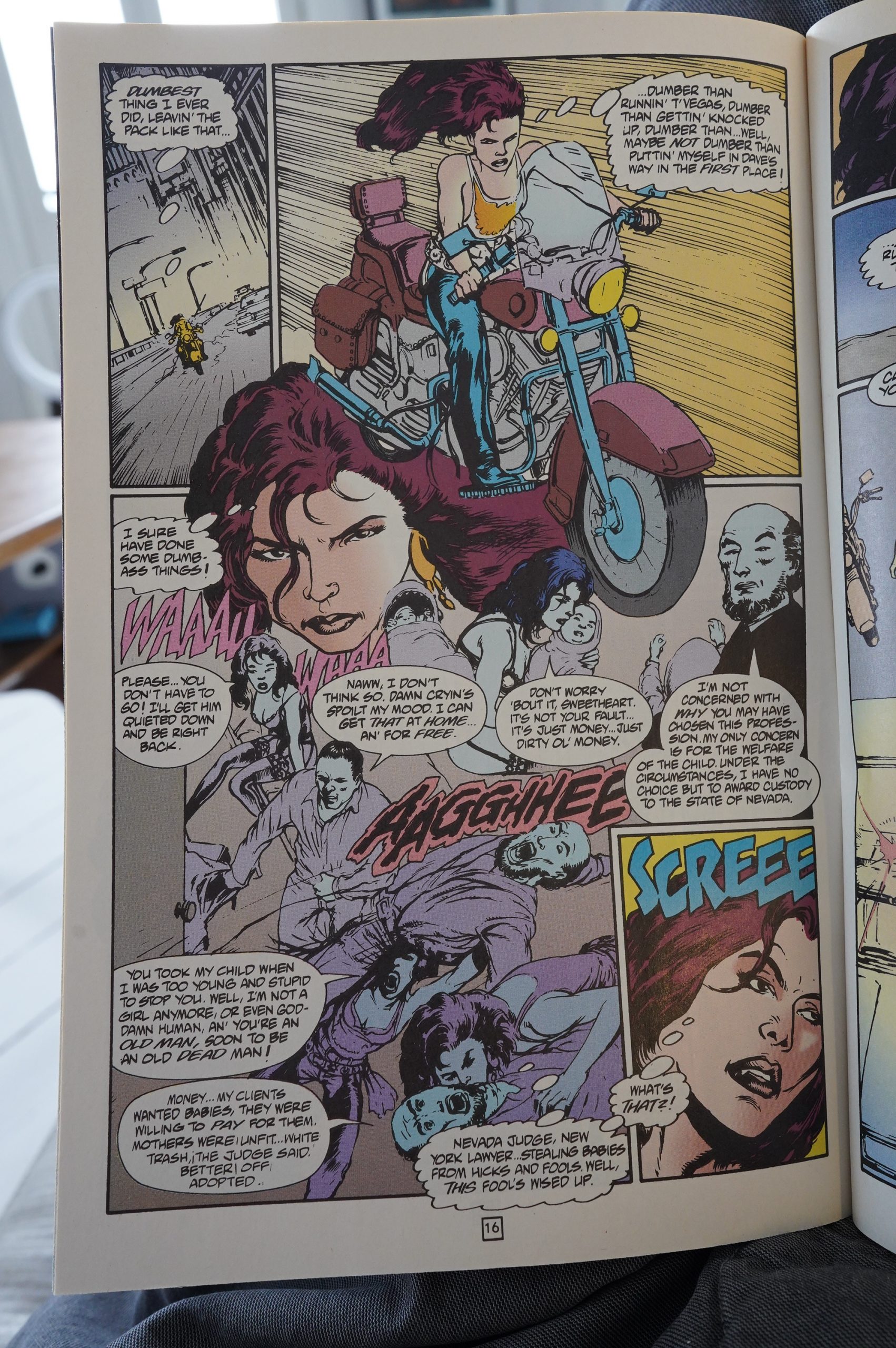 For a six-issue mini-series, we do go over the same plot points more than you’d expect. It’s like a mini-recap here and there, which is something most comics had stopped doing, since everything was going to end up as trade paperbacks, anyway…

But, to recap, the main plot of the series is that this vampire (Zack, I think), had a baby before she became a vampire, and the series is really a road movie to go and fetch the child. There’s complications with a sister and a… detective?… and it does really help with keeping things rolling. It’s a well-constructed series, really. 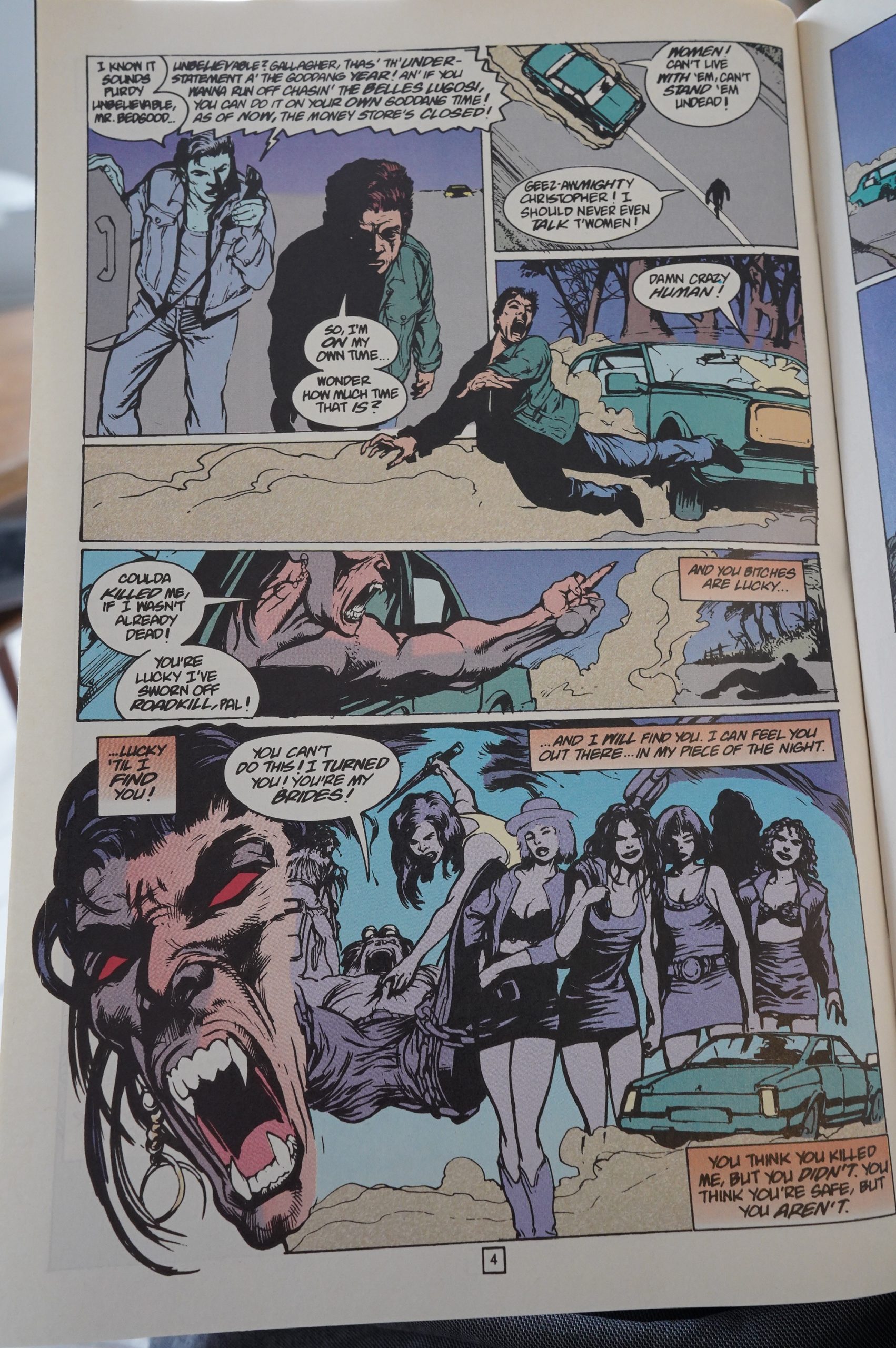 The artwork… not so much? Look at that second figure in the first panel (well, it’s the same character, but) that looks very odd and short indeed. I think the artist is going for a foreshortened downwards view, but it doesn’t really work at all… and the Batman-era Dick Giordano vampire is pretty out of keeping with the rendering of the other vampires… and it’s… I mean, it’s not a horrible page or anything, but it’s just boring. 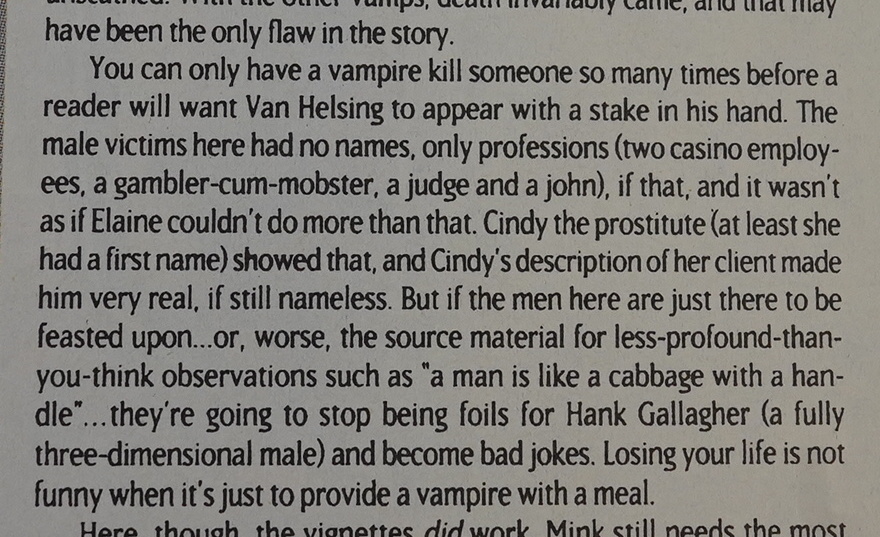 A letter writer opines that killing so many men is a turn-off (for male audiences). *rolls eyes*

Oh, and the cabbage? Now I feel like a copy-cat, but I really didn’t understand that er southern saying. Is it a double entendre? Is the handle the penis? Why would you need the cabbage anyway?

Anyway, I think this is the most straightforwardly successful Lee comic I’ve read: It’s a snappy read and it’s quite entertaining, and I’m not surprised that it’s apparently a commercial success as well.

A collected edition of this series has been published:

This book, which collects the complete 6-part miniseries, is not really a big and well-built tale storywise but it IS a fun, uncomplicated road trip which has it’s own take on the habits and what can and can’t hurt a vampire. And unlike most of the titles in this particular genre it’s NOT a T & A story.

A complete edition of all the mini-series has also been published.