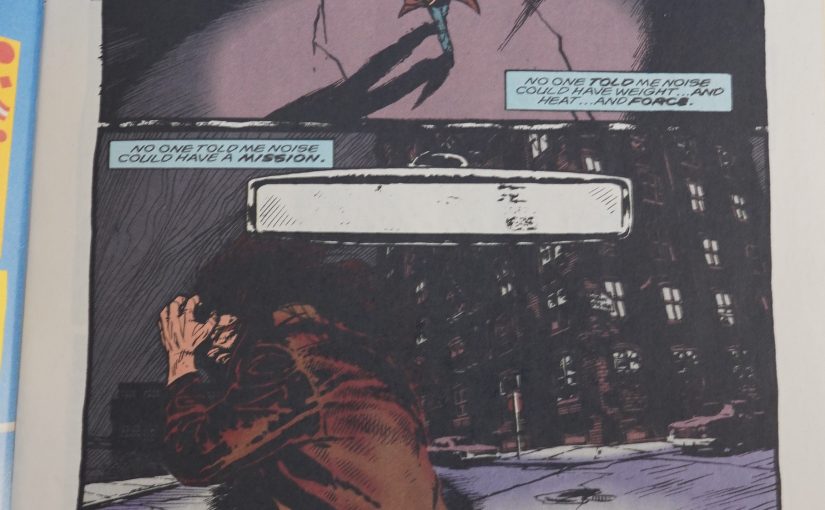 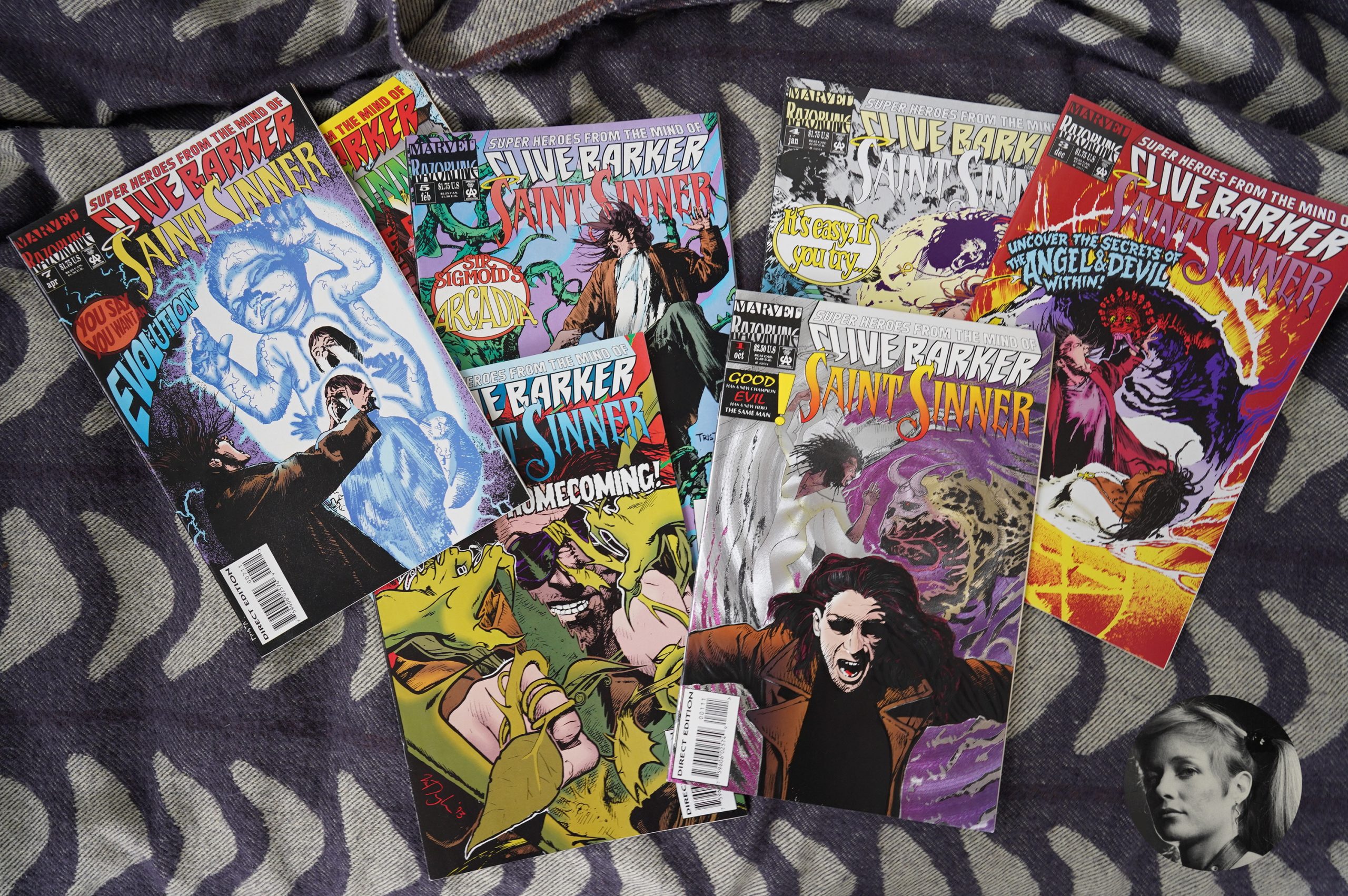 This book is part of Marvel’s Razorline — basically super-hero concepts from Clive Barker expanded into a line of four continuing series. I approached this series with a bit of trepidation after having read far too many Barker-based comics while doing the Epic Comics blog. They were all pretty… awful? Yeah. Pretty awful. 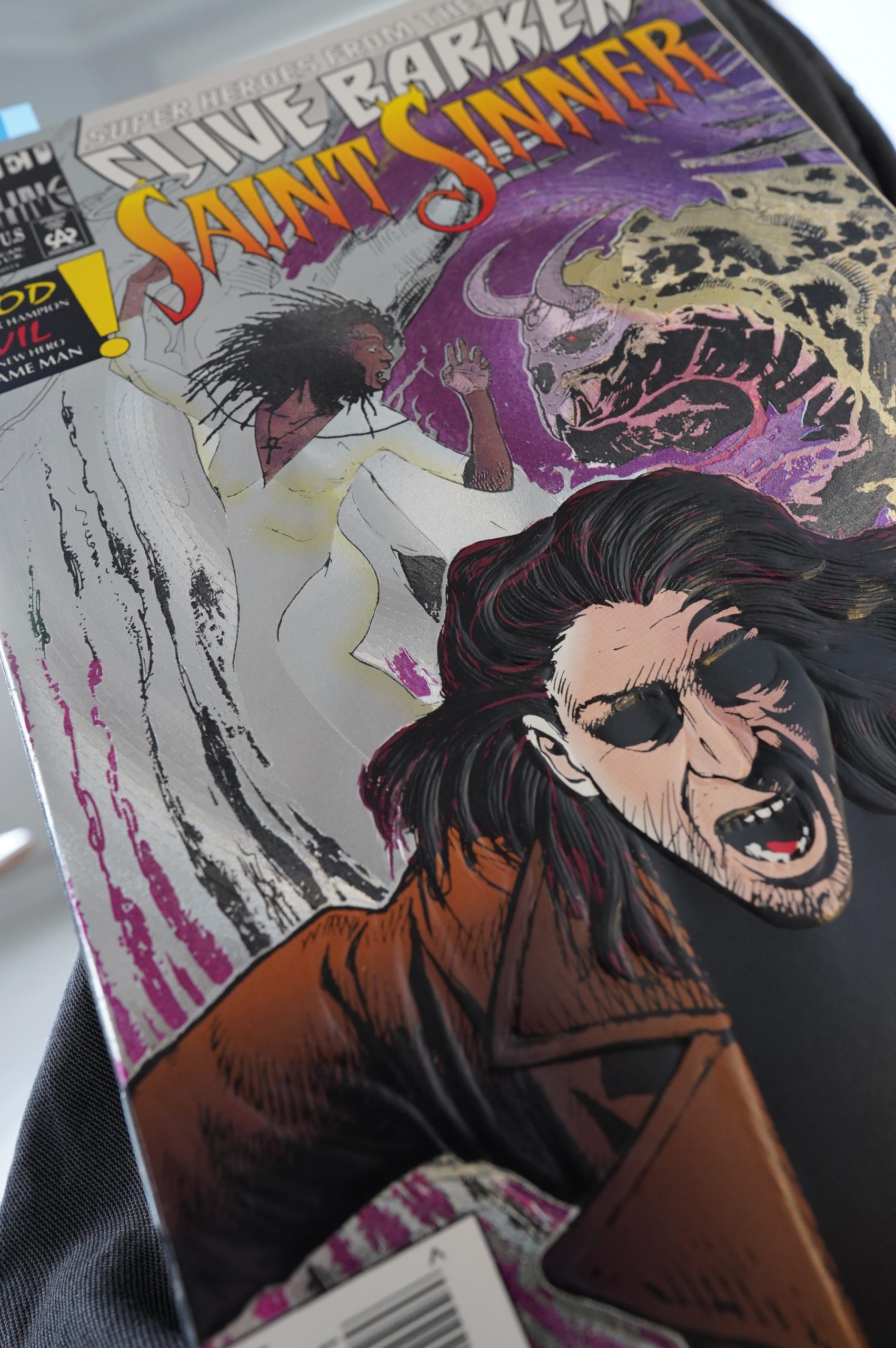 This series is from 1993, so the first issue has to have some sort of gimmick. This one has an embossed cardboard cover and metallic inks. It’s hard to say from the snap up there, but it’s really elaborate: It looks like they’ve used many different metallic inks, but that may be due to how it’s printed and patterned… It’s the most interesting use of metallic inks and embossing I can remember seeing from this era. (I mean, I haven’t seen that many — just the ones Epic Comics were doing for its Hard Hitters launches, and they basically looked like “they told us to use metallic inks somewhere, so I put a splotch down there. Done.” 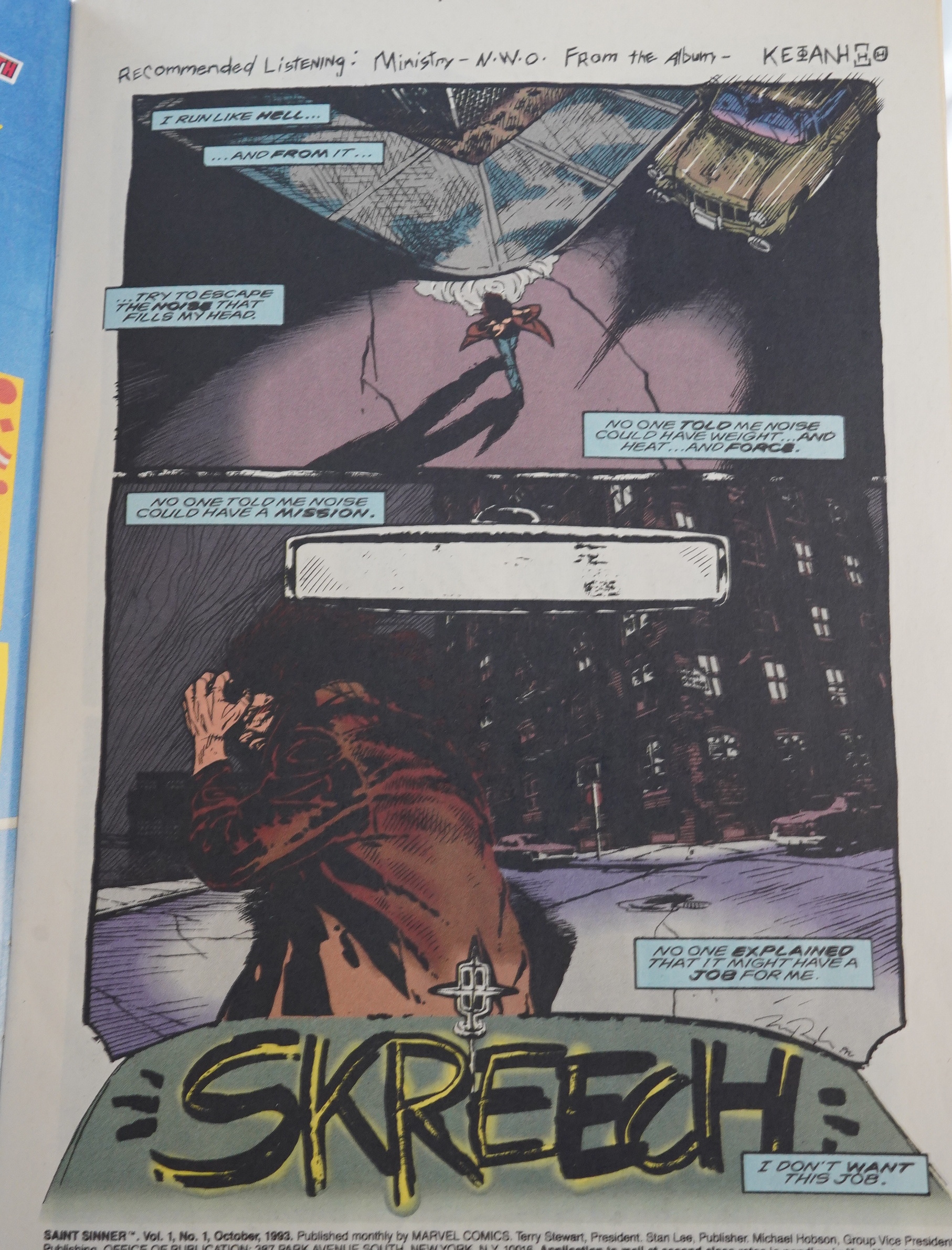 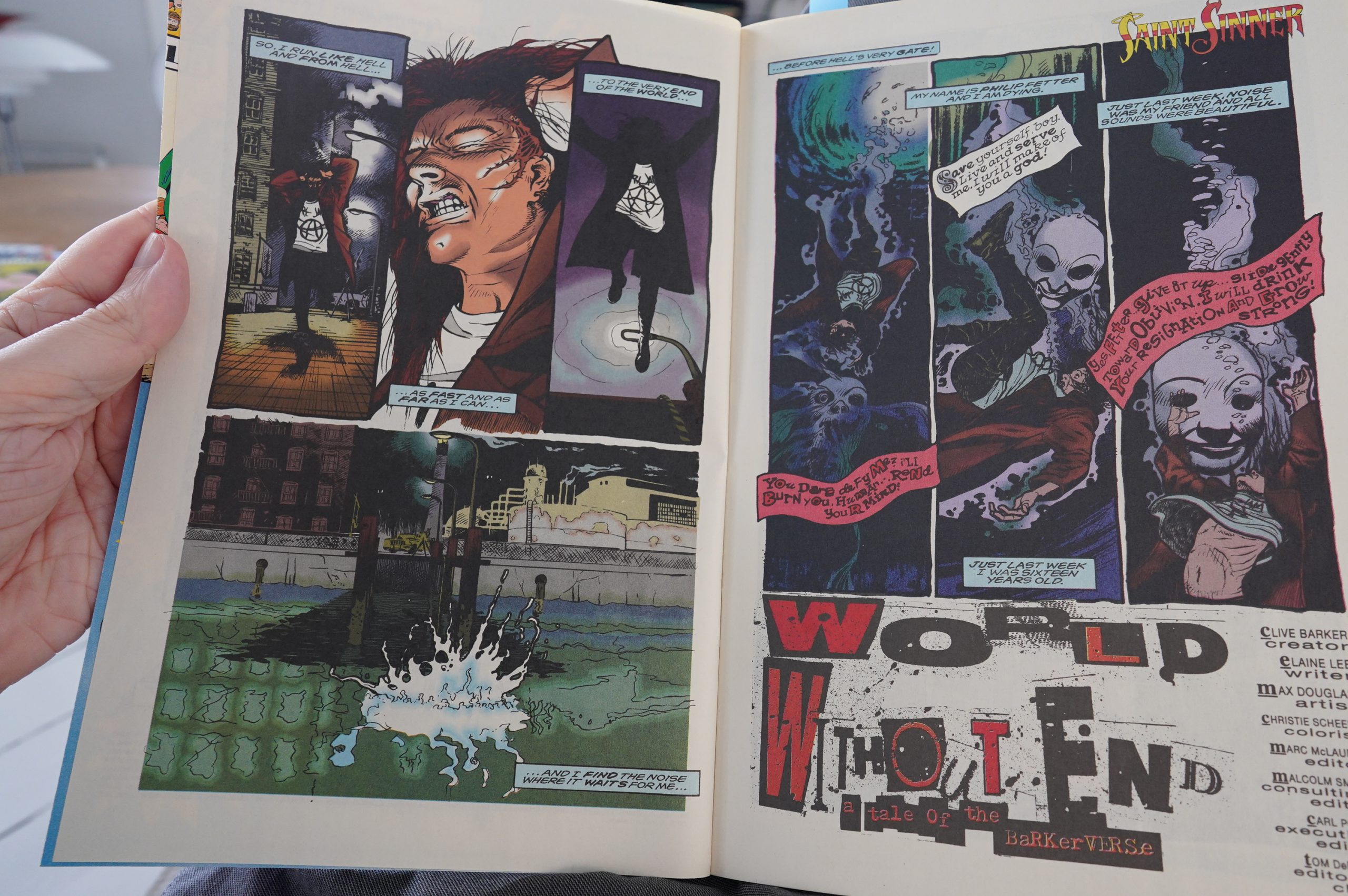 Well, the first page said to listen to N.W.O. from the Ministry album, so I put the album on. I’m very suggestible. 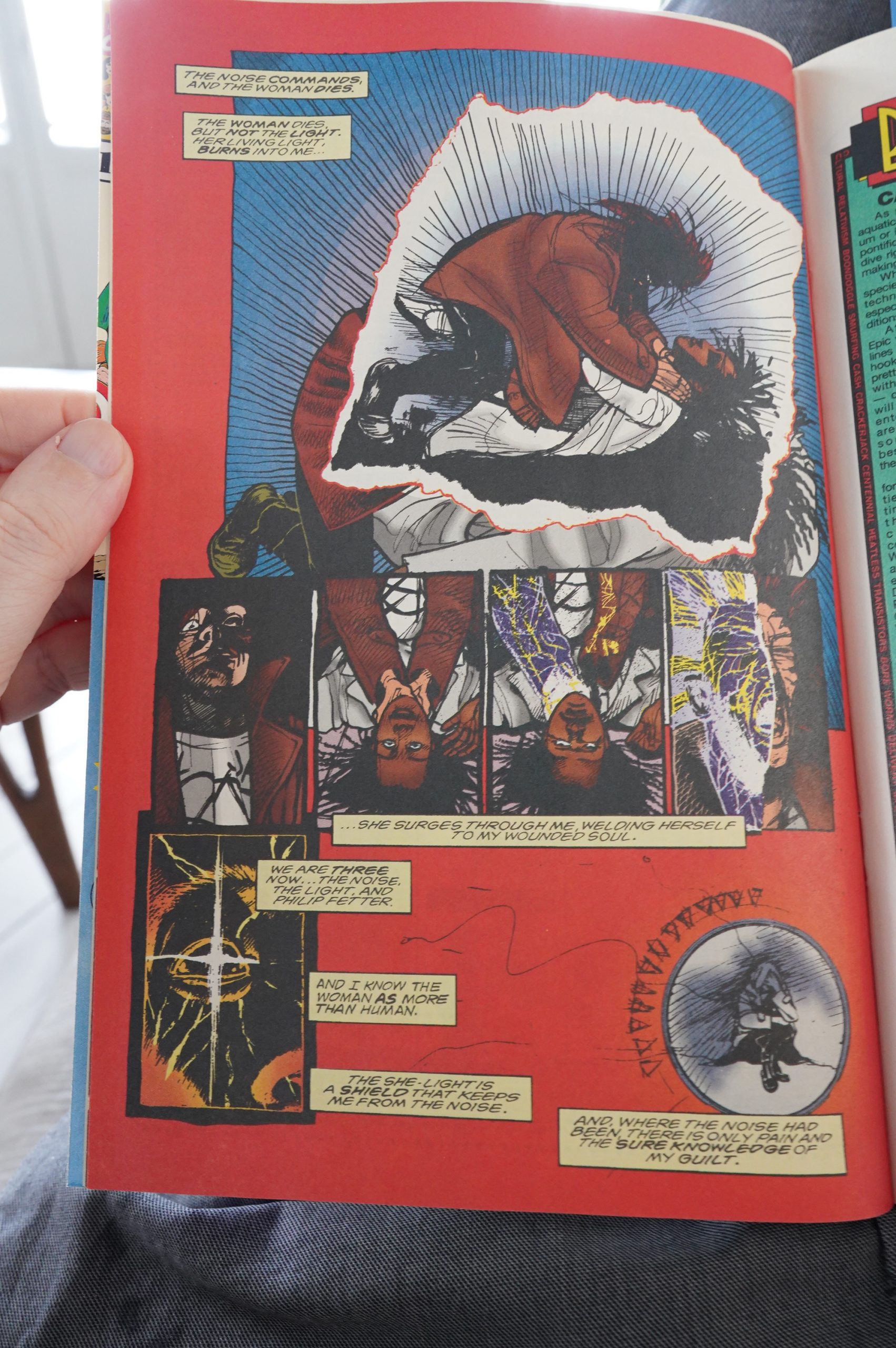 So… the concept is basically that we have a protagonist that’s possessed by a demon, and among many other people he kills while possessed is the woman above, who turns out to be an angel. Who then possessed him, too. Which means that you have three personalities in one body. And he has super-powers (he can age/evolve/de-age things.) 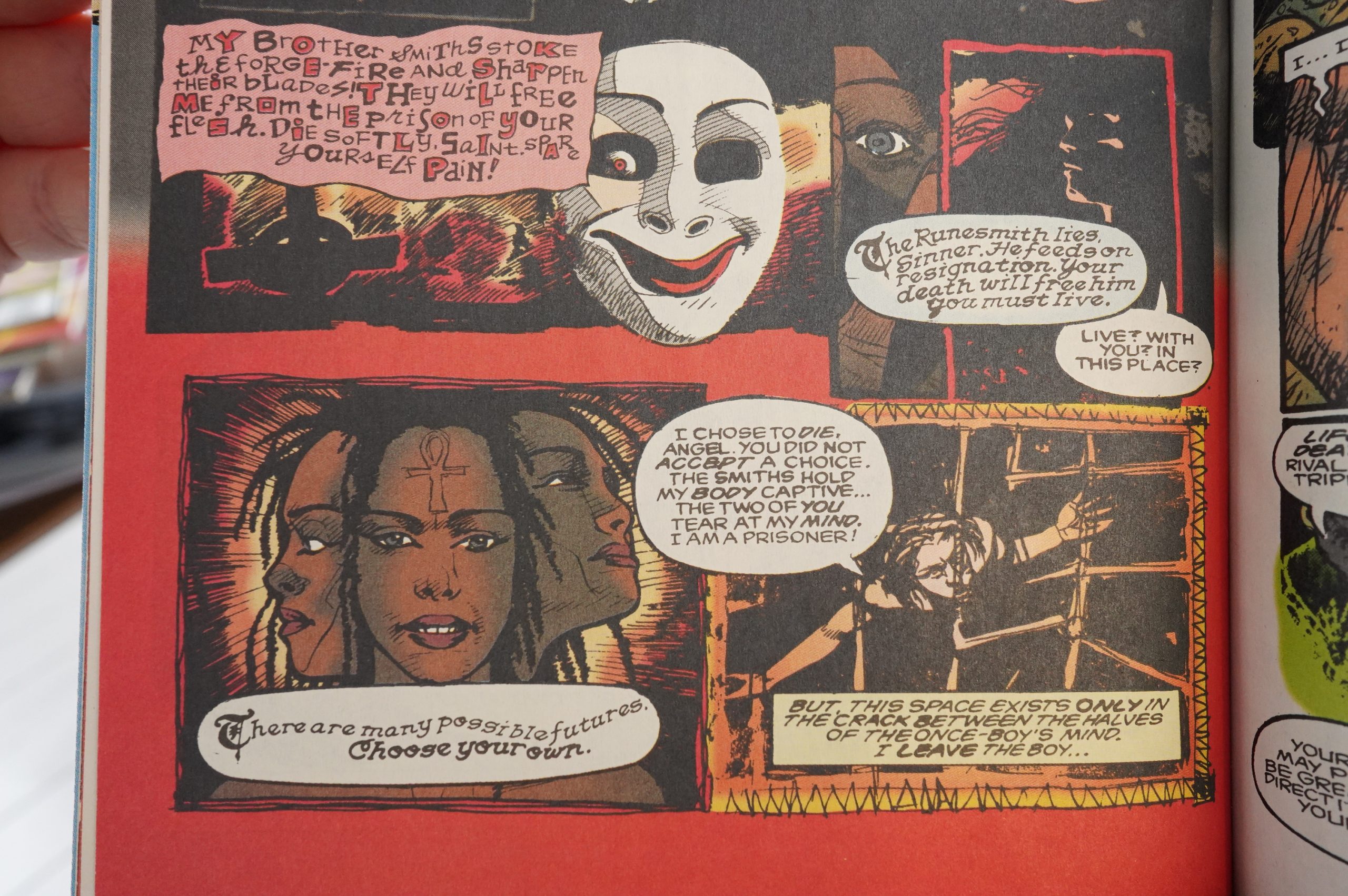 So we get these different voices using different lettering (poor Janice Chiang) yapping at each other incessantly. There’s… a lot of dialogue. Trialogue? That’s a word now. 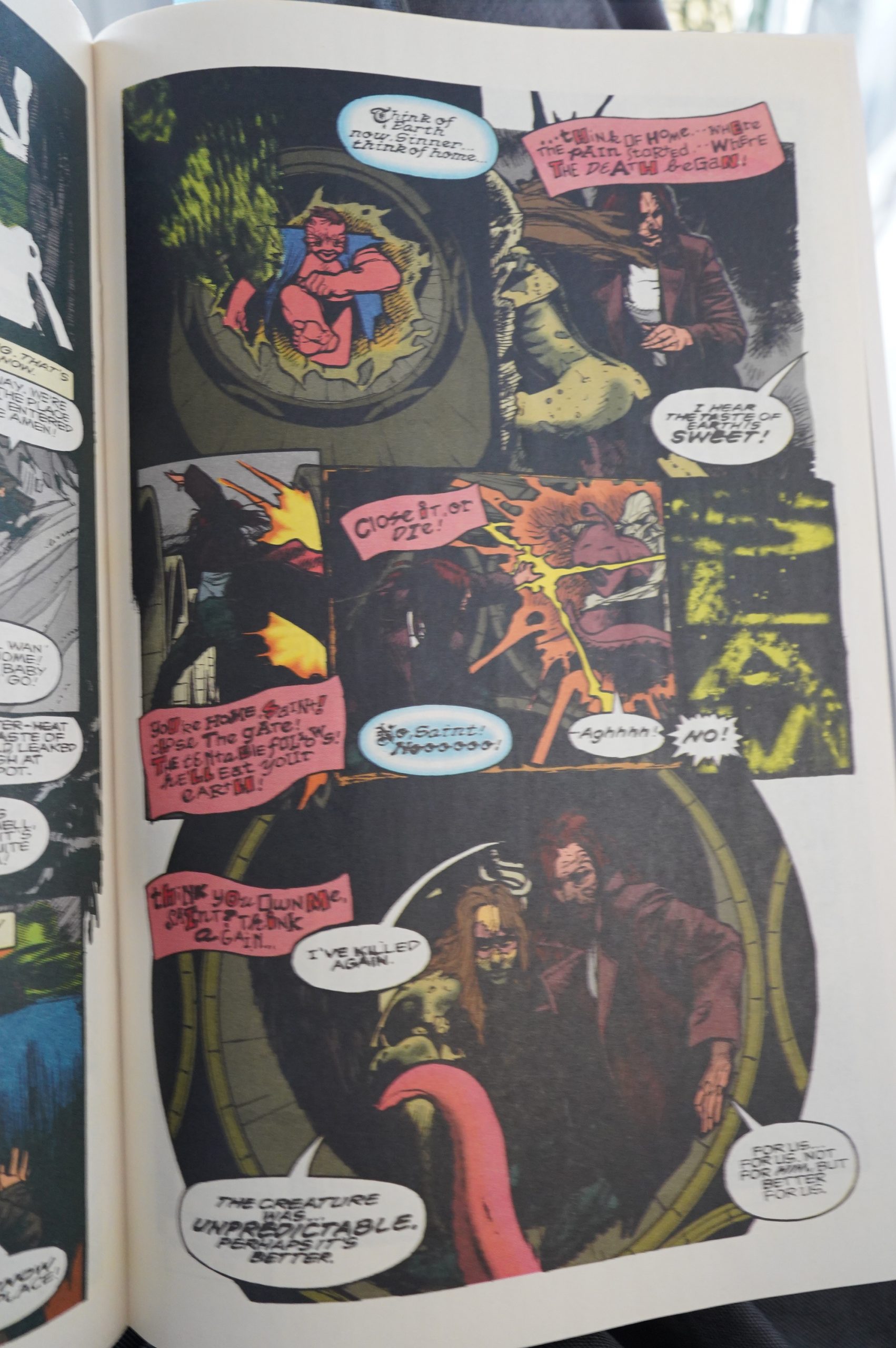 The book is just plain abstruse. Above you apparently have some inter-dimensional hi-jinx where… one of them dies? If you’re able to tell that from the artwork, you’re better at interpreting lines than I am. 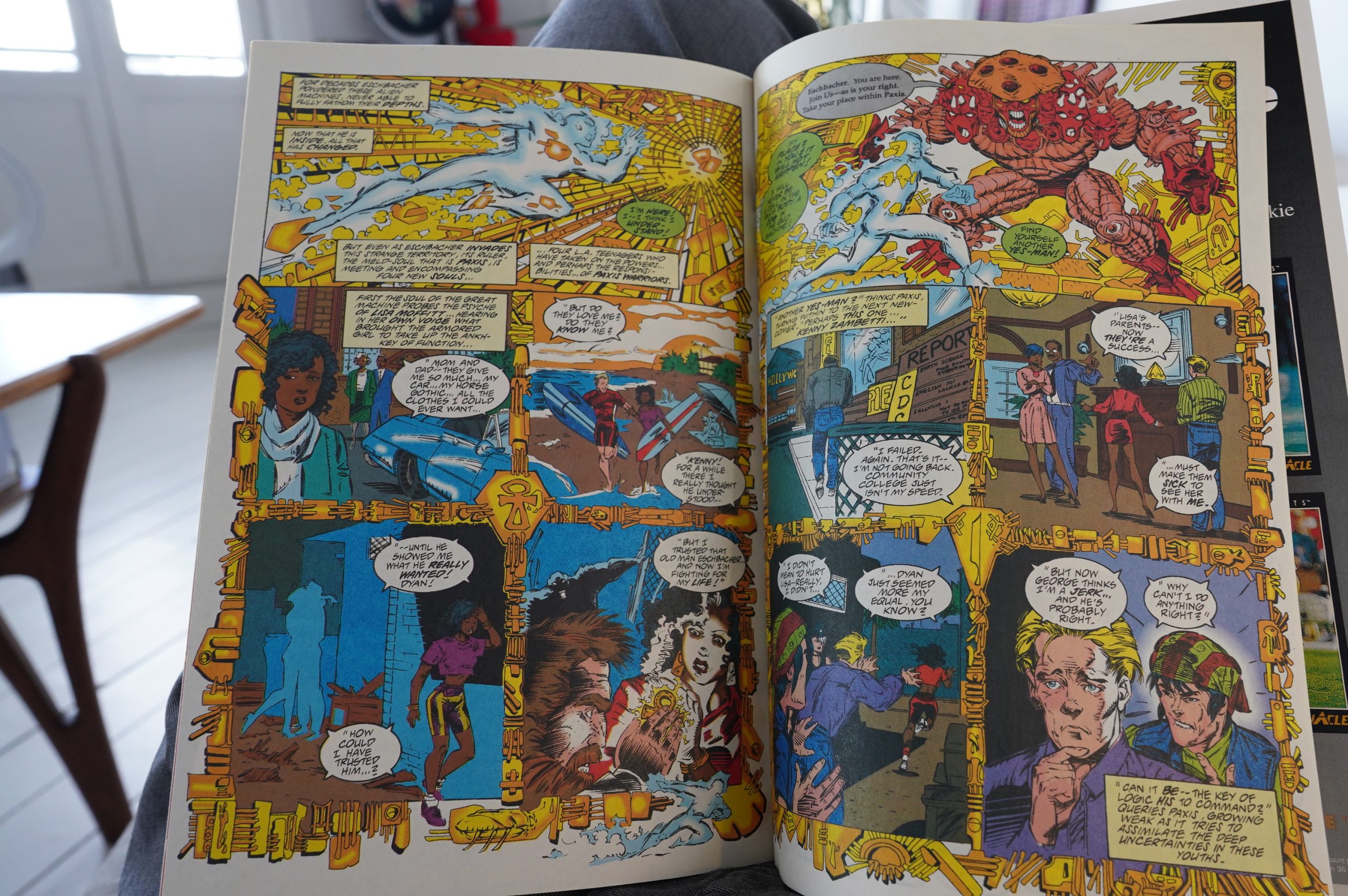 OH DEER. We get a previous from one of the other Razorline books, Hyperkind. I’m glad I’m not reading that one — it looks like a migraine put down on paper. 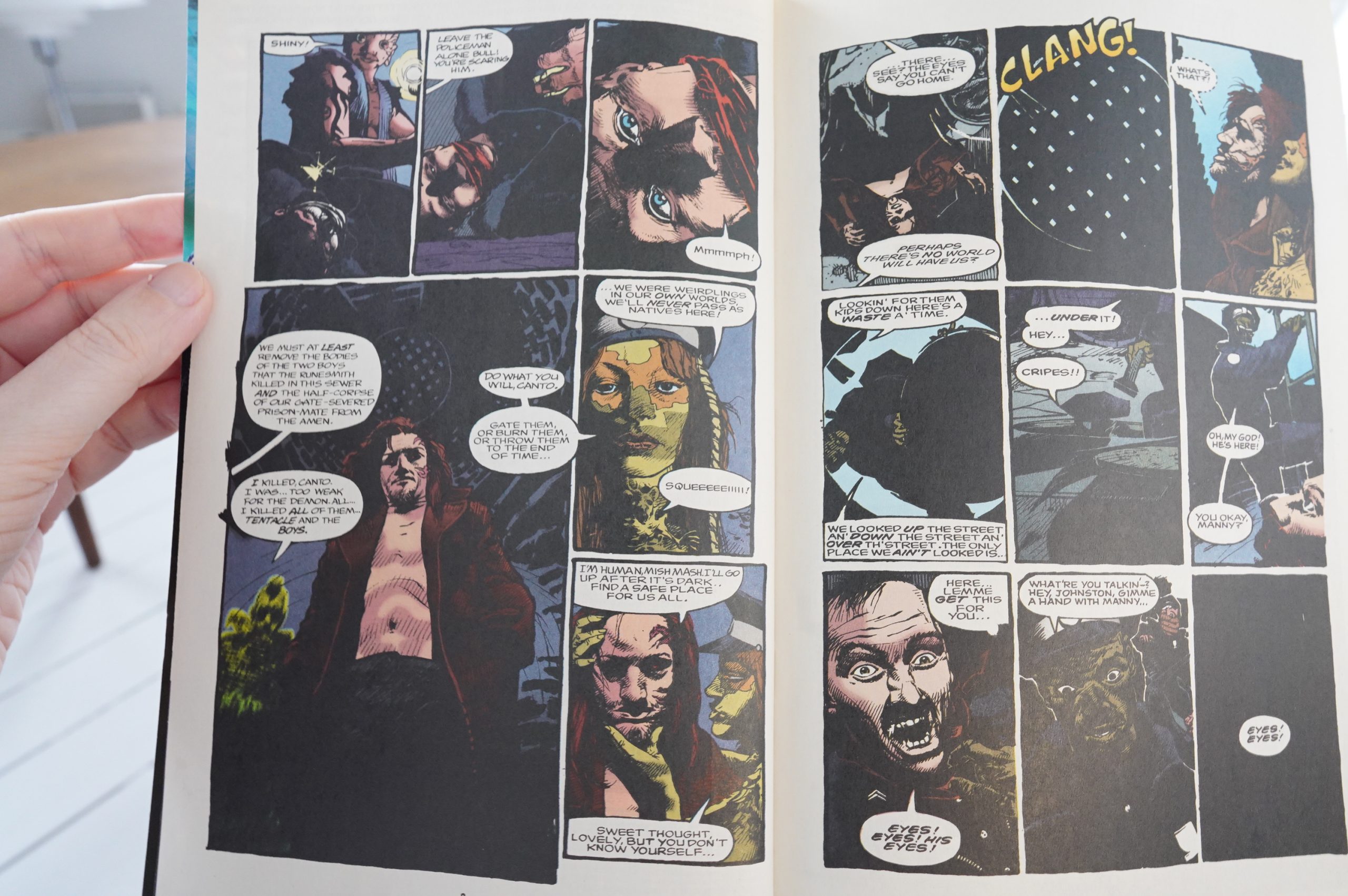 With the second issue, the artwork becomes a bit more easy to read, at least. 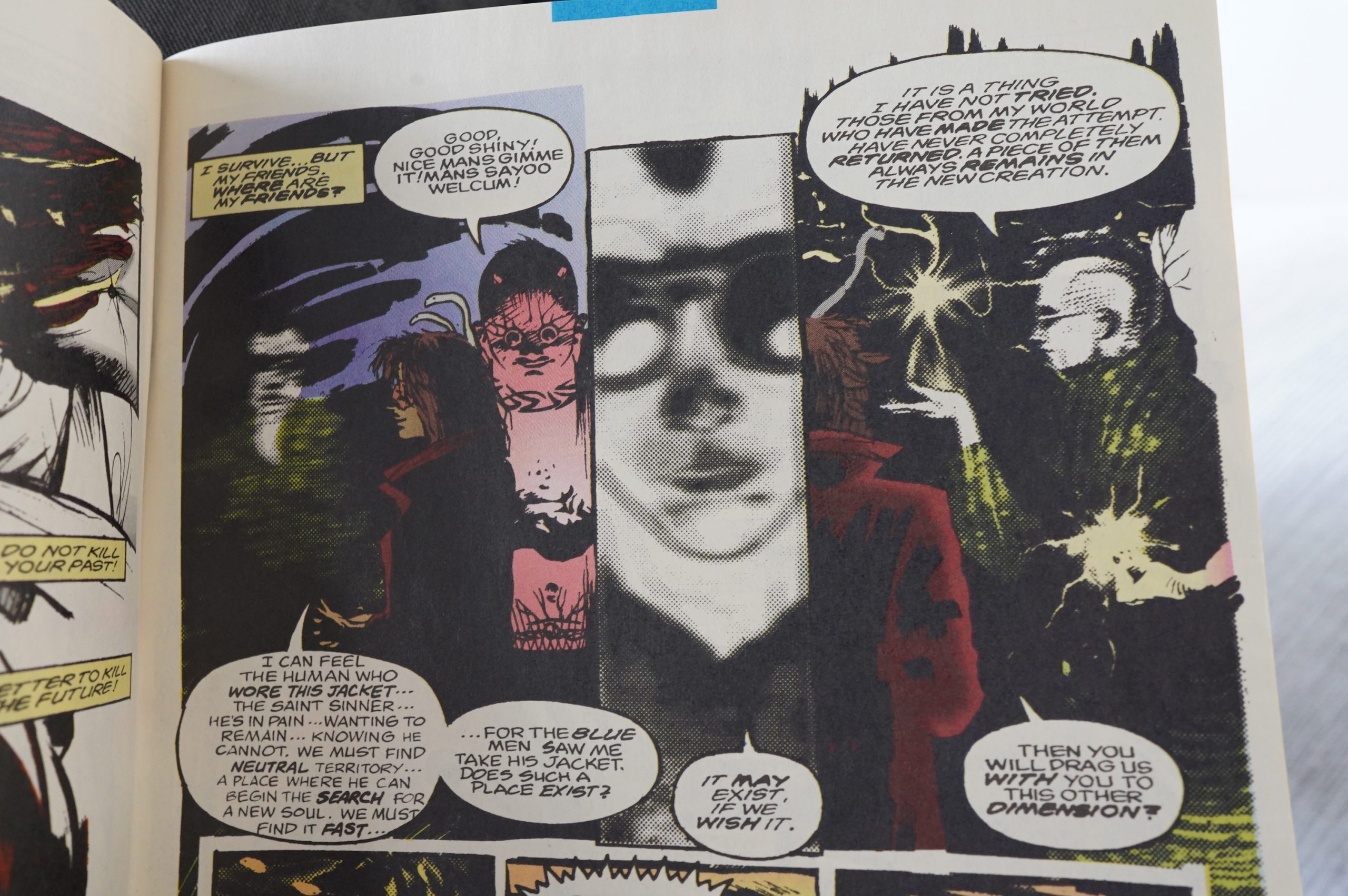 And there’s interesting effects like that blurry guy. He’s blurry because he can go between er dimensions and stuff, you see. 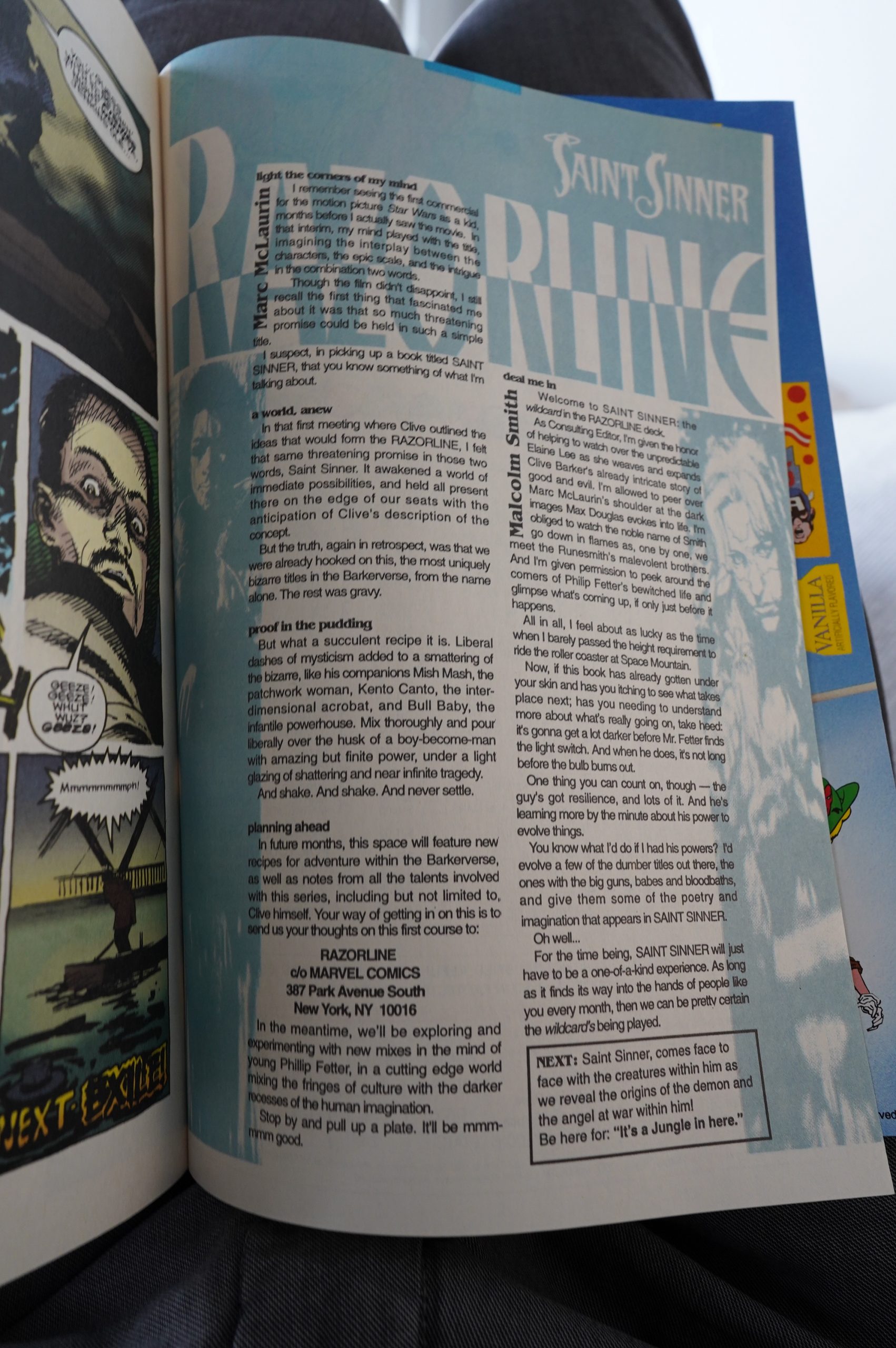 Ah, I see: There’s a consulting editor, Michael Smith, involved with this line of comics. He’s overseeing this from the Clive Barker side, if I interpret this correctly… 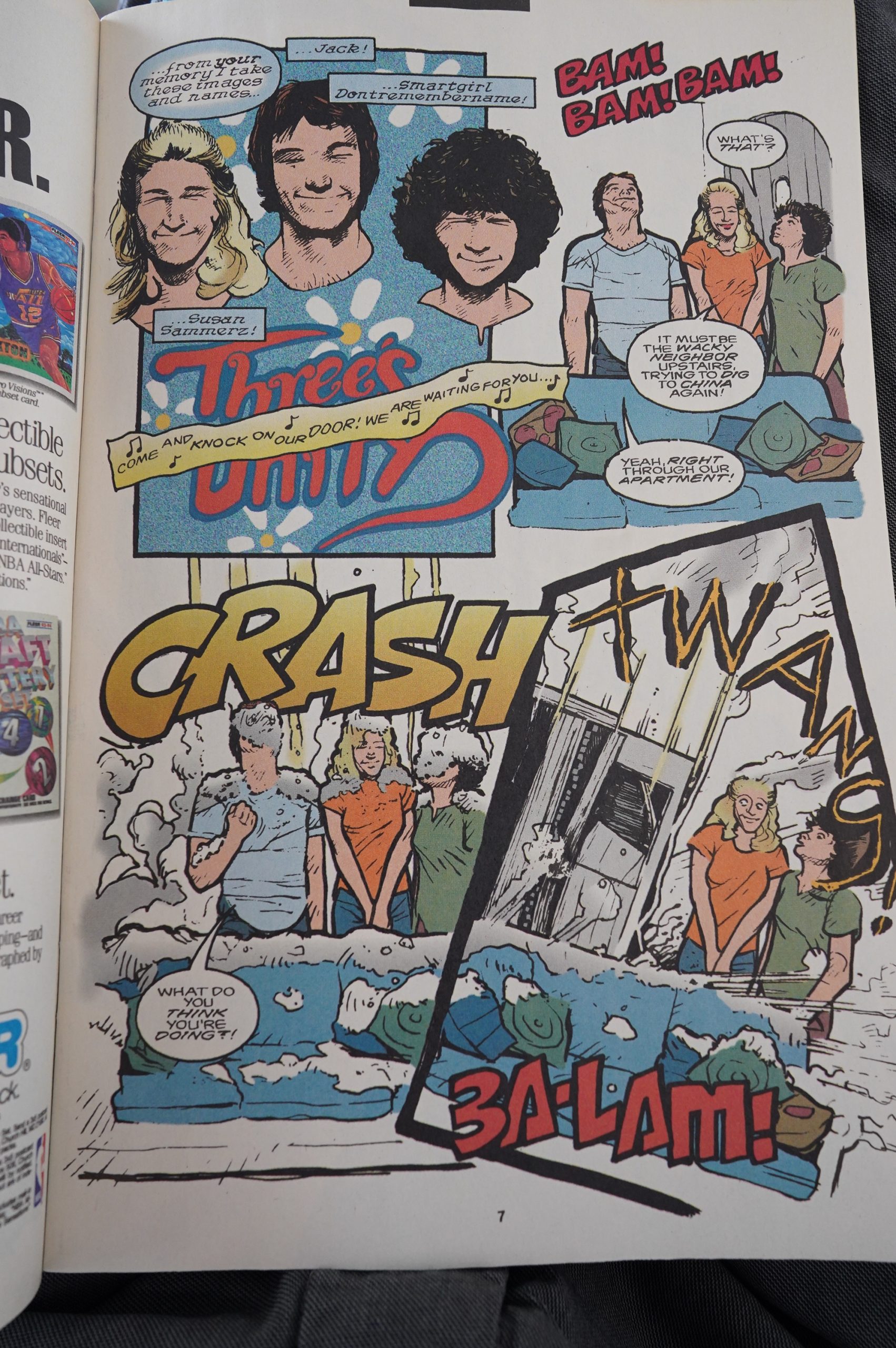 The angel tries explaining things to the human on terms the human can understand: By giving a Three’s Company analogue. 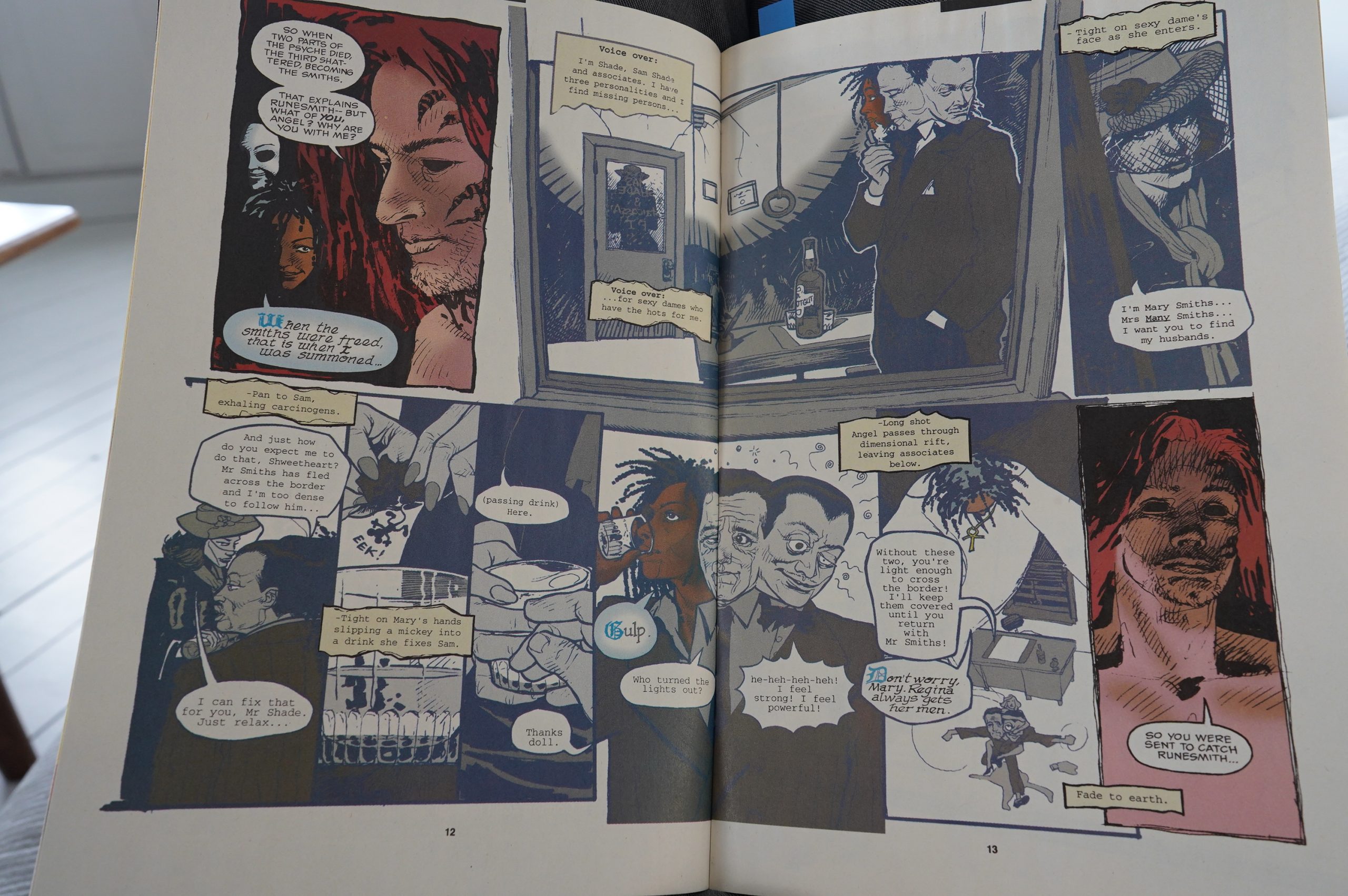 And then a film noir thing.

At this point in the series, I’m kinda intrigued. There’s just so much going on, and while I’m pretty sure that none of it is actually going anywhere, I’m hoping that Lee will be doing something interesting here other than just adding more and more stuff. It’s a very dense read. 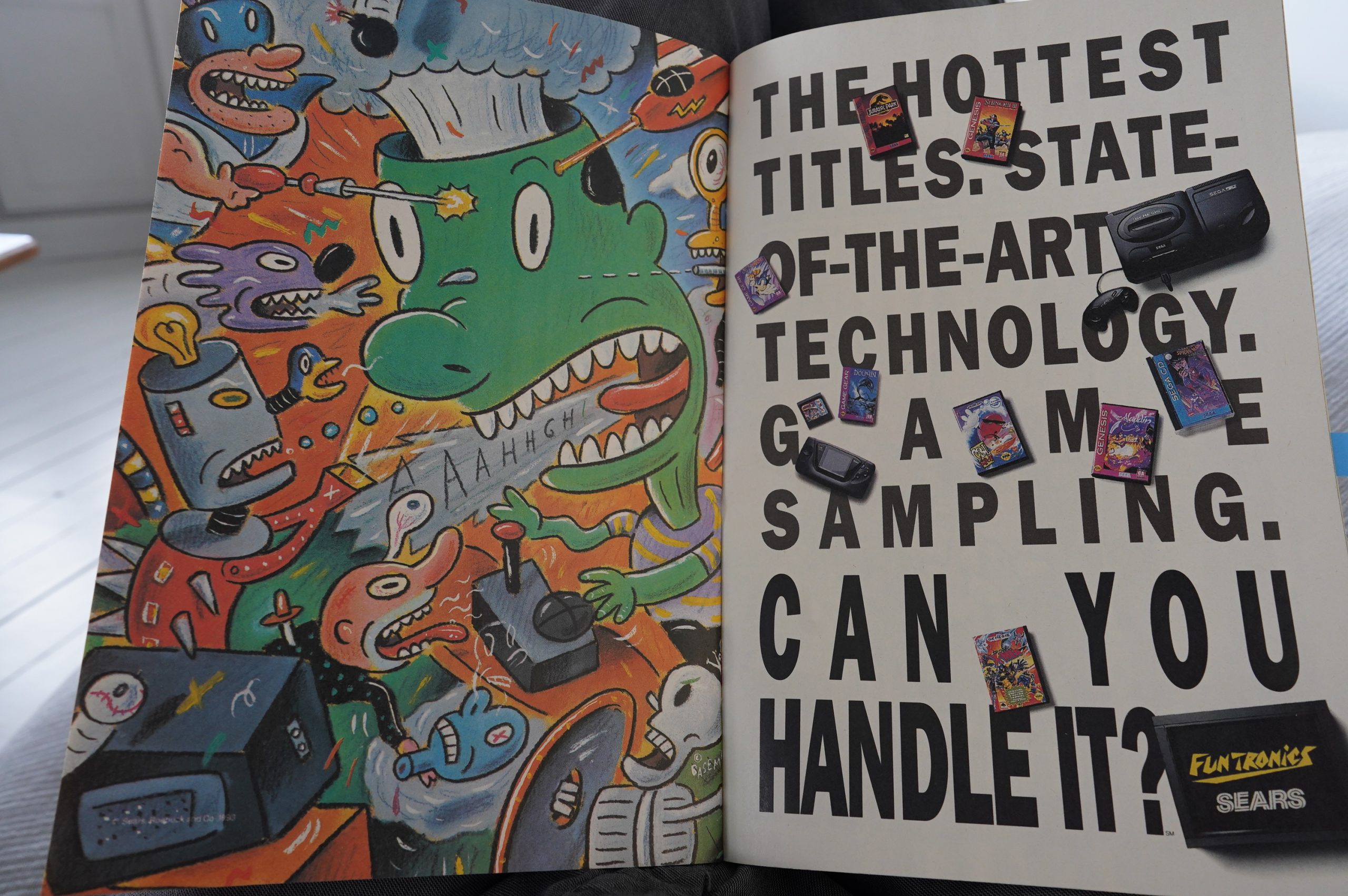 Oooh! An ad with artwork by Gary Baseman. Stylish. 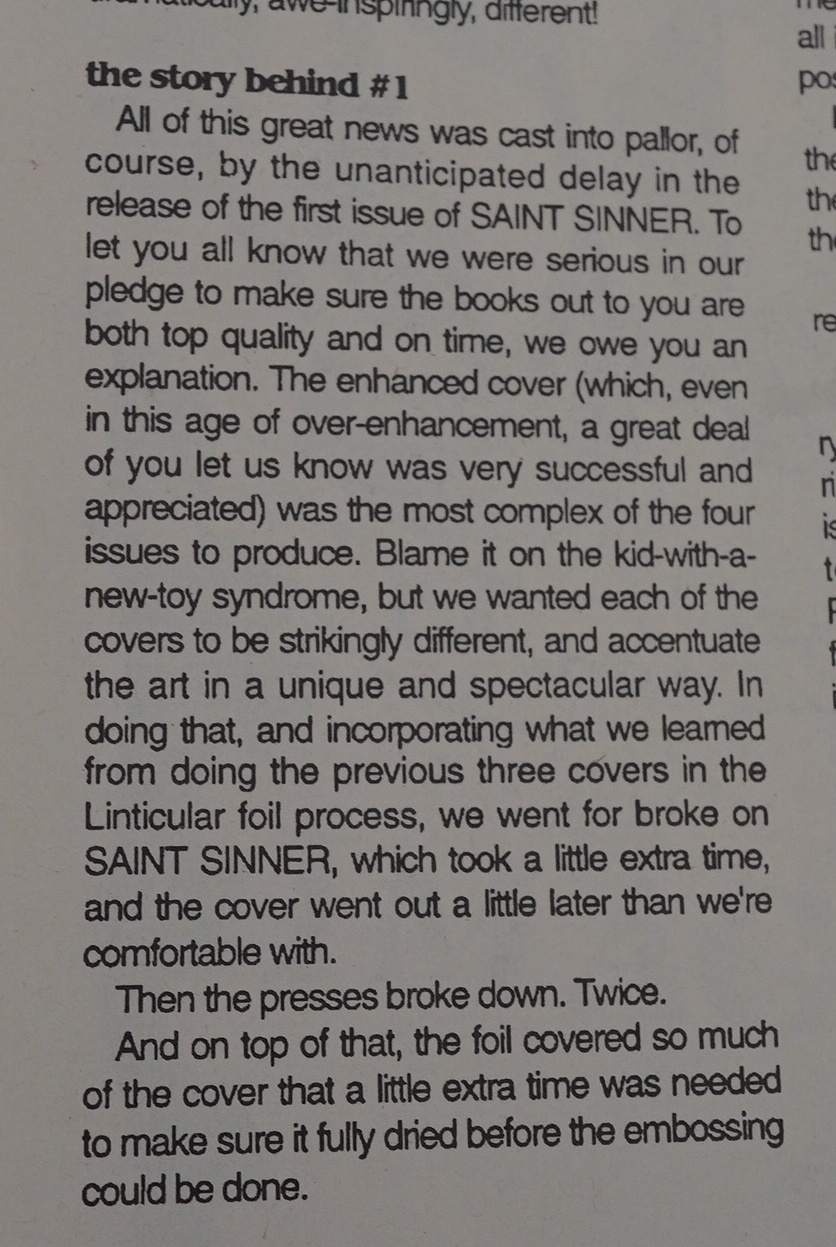 The editor explains that the first issue shipped late… because of problems with the cover on the first issue, which was very complicated to make. So I guess I was right to be impressed. 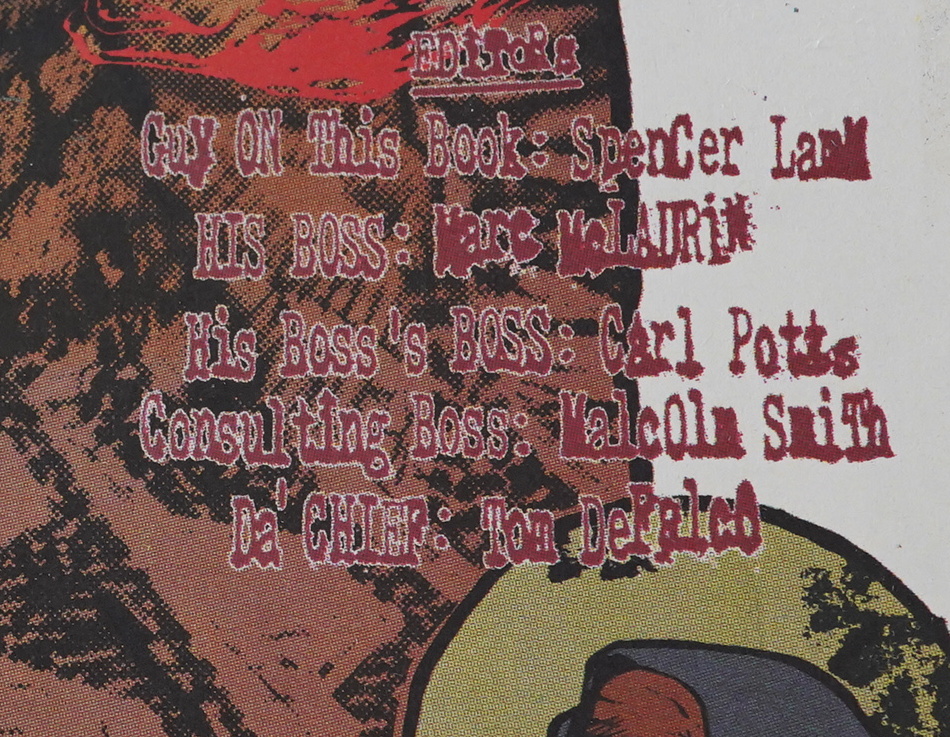 Marvel would go bankrupt a couple of years after this, but before that happened, they reduced the staff significantly. I seem to remember somebody writing that they had 30 editors on staff, and they fired all but six.

And looking at these lists of editors in every issue, you have to wonder whether they perhaps had a… few too many editors at the time? I guess Potts and DeFalco didn’t actually work on this book, but the other three sounds like they were involved. 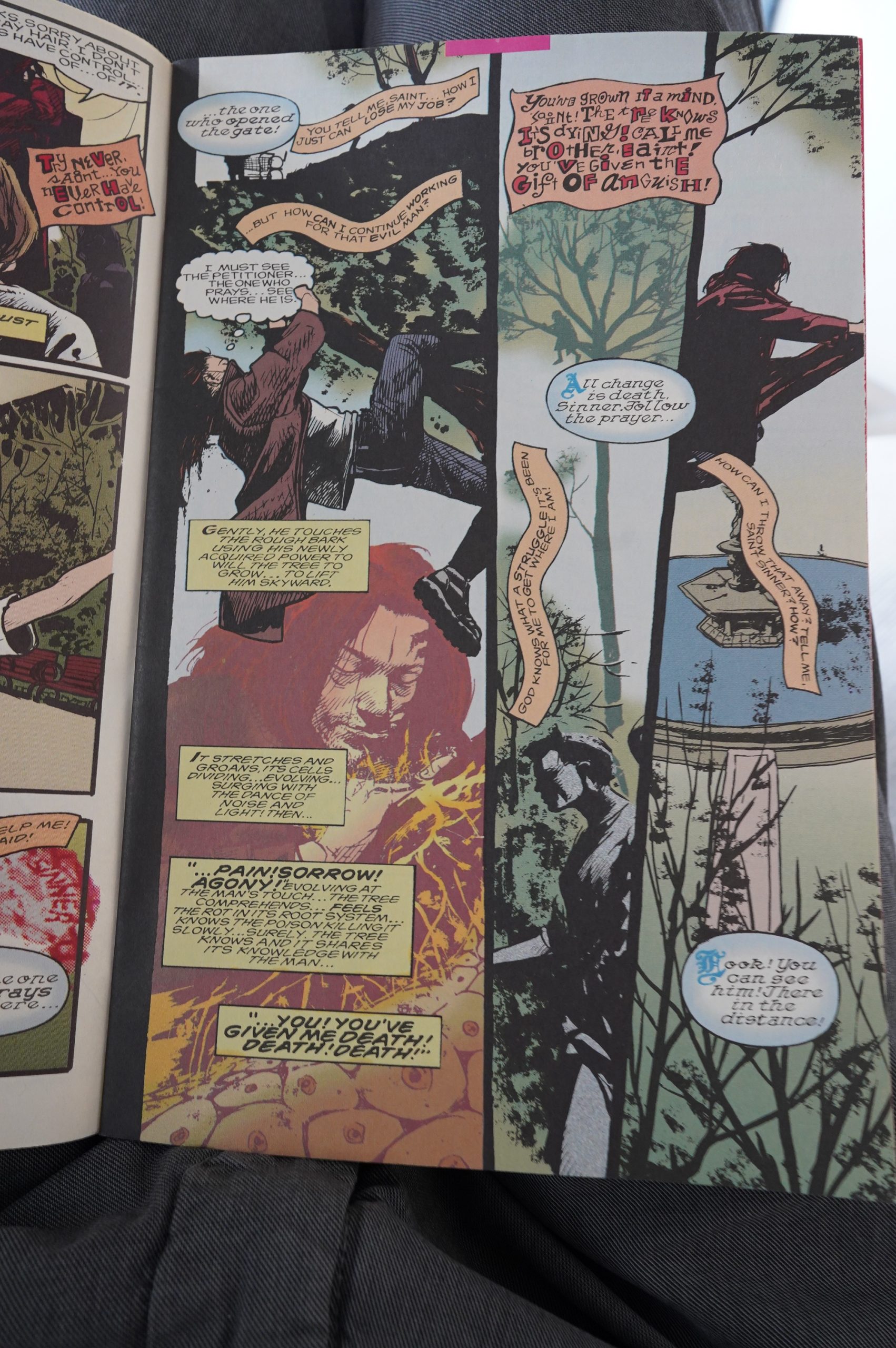 And we haven’t heard or seen from the tree before this page, and we’ll not hear or see it again after this page.

It’s a lot. It’s a lot for one single page. There’s a lot of these pages.

Is it too much? It’s exhausting, anyway. And then… we get a crossover with Ectokid, and this issue continues the storyline from an issue there instead of the previous issue of this series. So the normal Marvel shenanigans. The artwork continues to change and becomes more legible. Probably because Richard Pace takes over the pencils. We get an example of what Barker actually contributed to these series. It doesn’t really seem like it was extensive.

Lee explains a bit about why she’s doing this series. 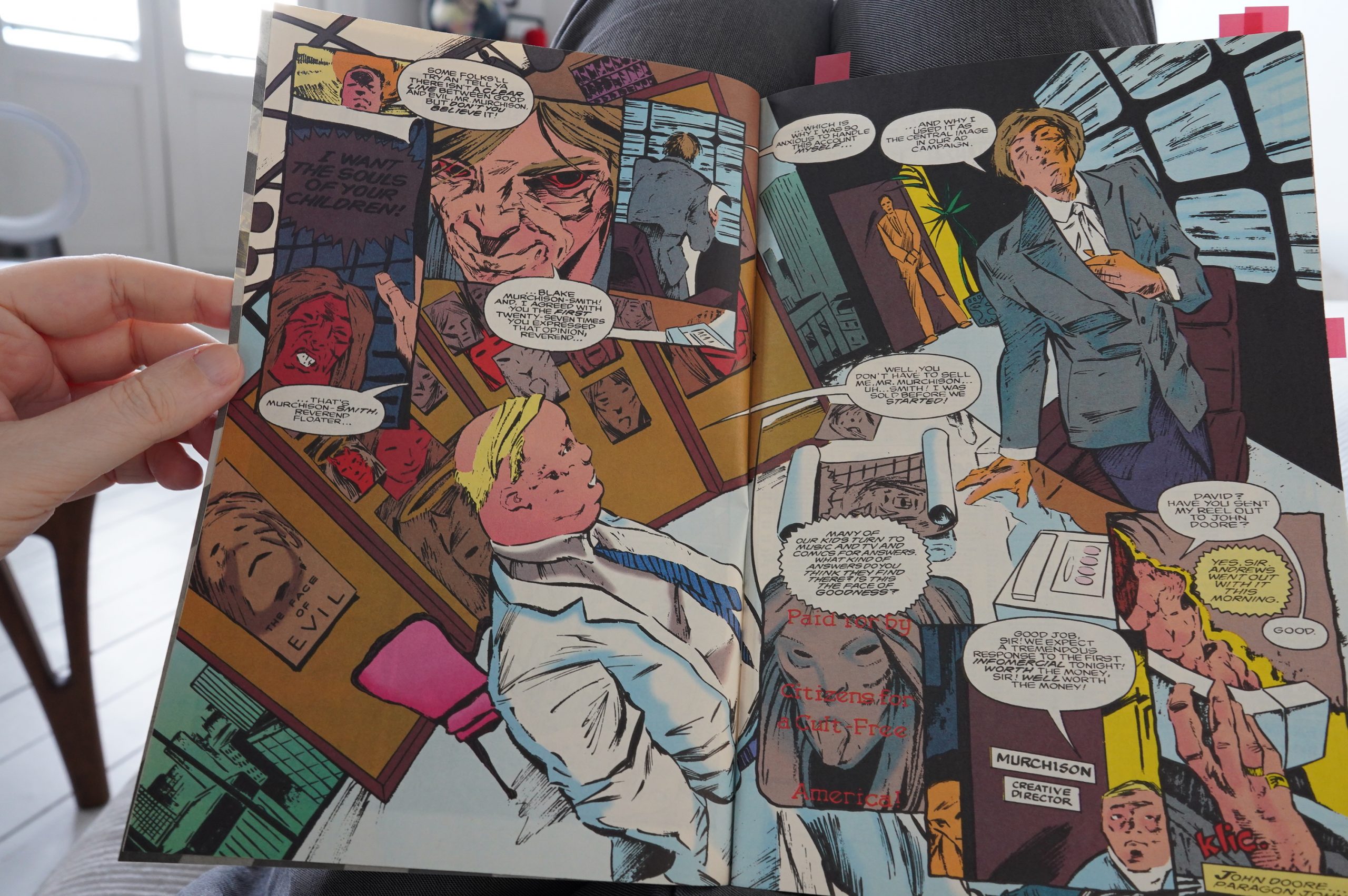 We get a new art team! The editor explained (in the previous issue) that the penciller had just submitted something to Marvel, and he’d snapped him up.

It’s pretty wild… everybody looks like they… have leprosy? I love it. I mean, look at it. LOOK AT IT! It’s wonderful. Look at that pose the running cop has. And while it’s expressionistic, the storytelling is a lot clearer than with the previous team. I wonder whether Larry Brown went on to do something else; I want to see where he’s going with this style. And they’re selling subscriptions to the book, even if it’s going to be cancelled the next issue (which, surely, they had to know when the next-to-last issue went to press). The final two issues (a two-parter) is all about living and not wanting to or not, and our protagonist substitutes a dying baby with a living one… and… stuff… it’s pretty weird. And then it’s over. The end. Absolutely none of the plot strands that had been building were resolved.

But that’s a nice final page.

The editor explains that the series is cancelled for low sales, and the reason was the current glut of comics. (Which was the result of Image Comics shenanigans, and Marvel responding by launching dozens and dozens of new series.) By the end, thousands of US comics shops would close their doors.

It sounds like the other Razorline series would continue, but they were all cancelled a couple of months later.

And there was a Saint Sinner coda?

The final Razorline release was the one-shot Ektokid Unleashed (Oct. 1994), written by Dan Abnett and Andy Lanning, with artwork by penciler Hector Gomez and inker John Strangeland. It included a prose short story by Elaine Lee about another Razorline character, Saint Sinner.

This series has never been reprinted or collected, and it would be a hard sell, as it just… stops.

There’s a series of Youtube reviews of this series. It’s really, really boring — it’s a guy recounting the plot of the issue, and if there’s one thing I hate more than retelling a plot, it’s listening to somebody retelling a plot.

I tried googling Larry Brown, but I was unable to find anything about him, or whether he continued working in comics, or dropped out after these two impressive issues.